We had our one and only stay at the Mamore Lodge Hotel (now defunct). Used the 200m start to good effect. 😉

Headed east out from Mamore Lodge along the track to Loch Eilde Mor, cutting uphill to Sgurr Eilde Beag.

Looking west along to Pap of Glencoe reflections 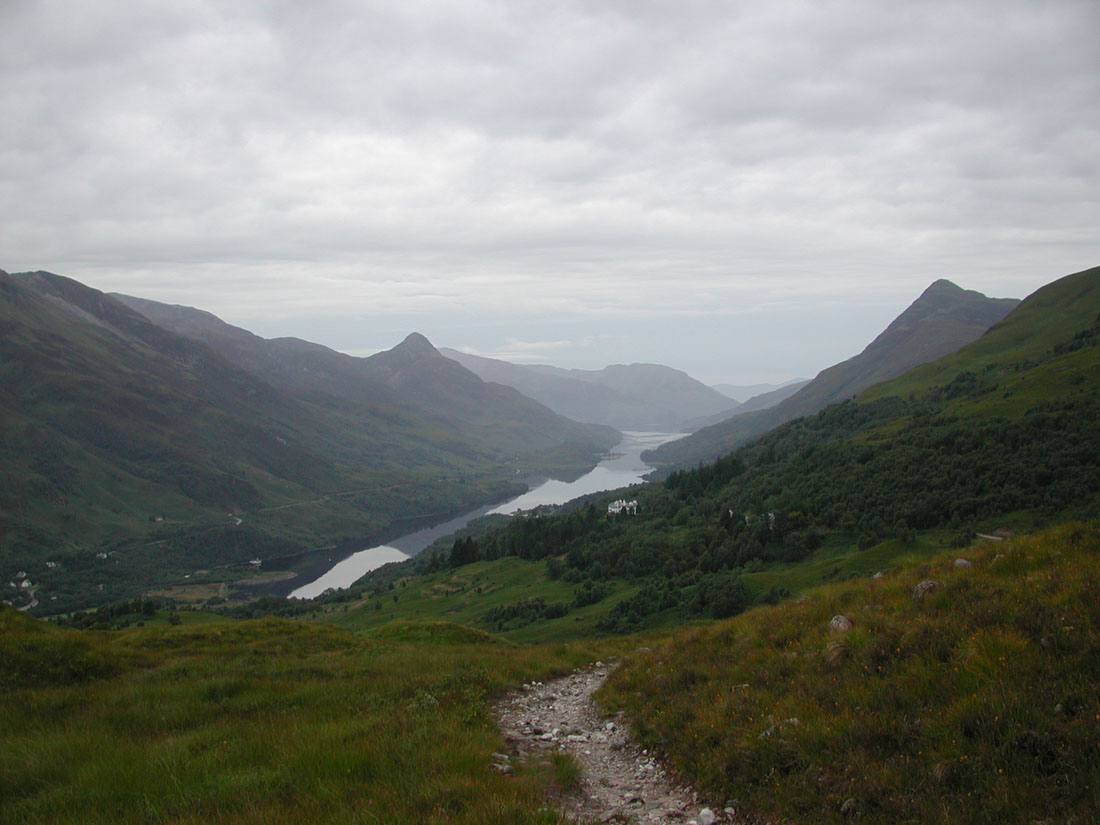 A rather flat, grey morning with some wreathing mists as we ascended Sgurr Eilde Beag. It is a rather dramatic looking area. 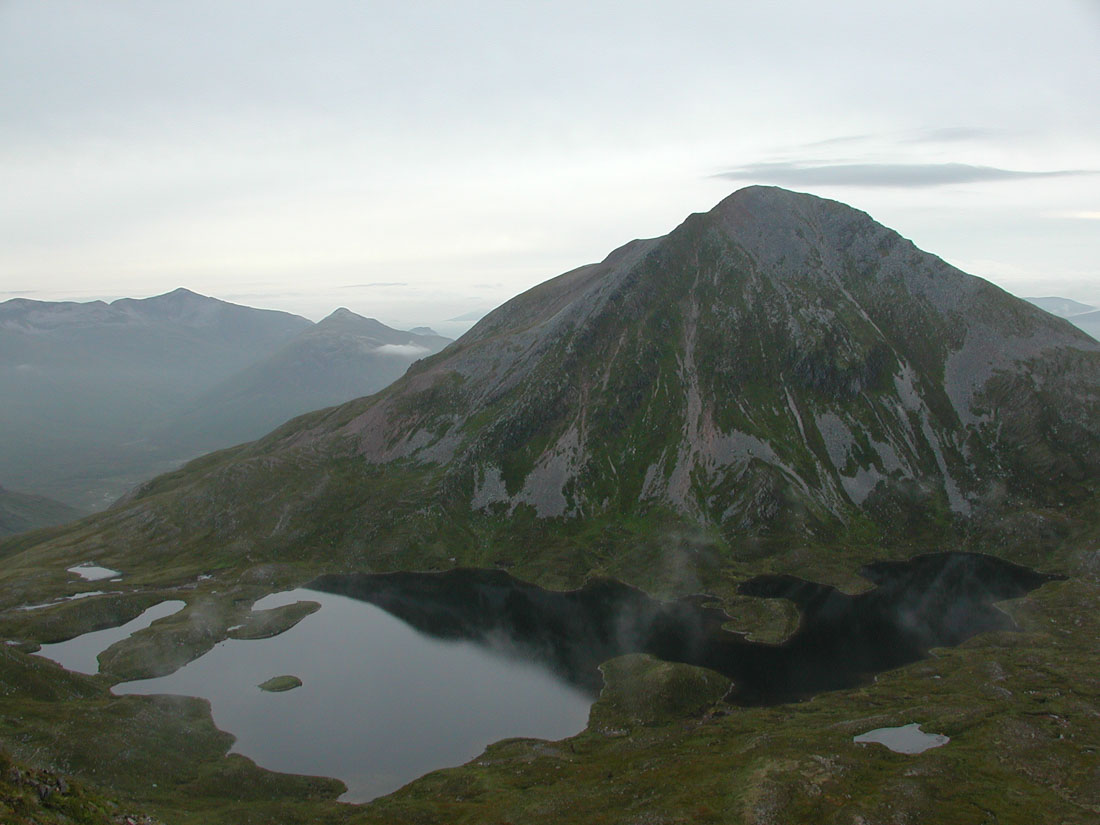 The Mamores are a beautiful set of high ridges, making for superb summer walking. We wandered up to the summit of Binnein Mor. 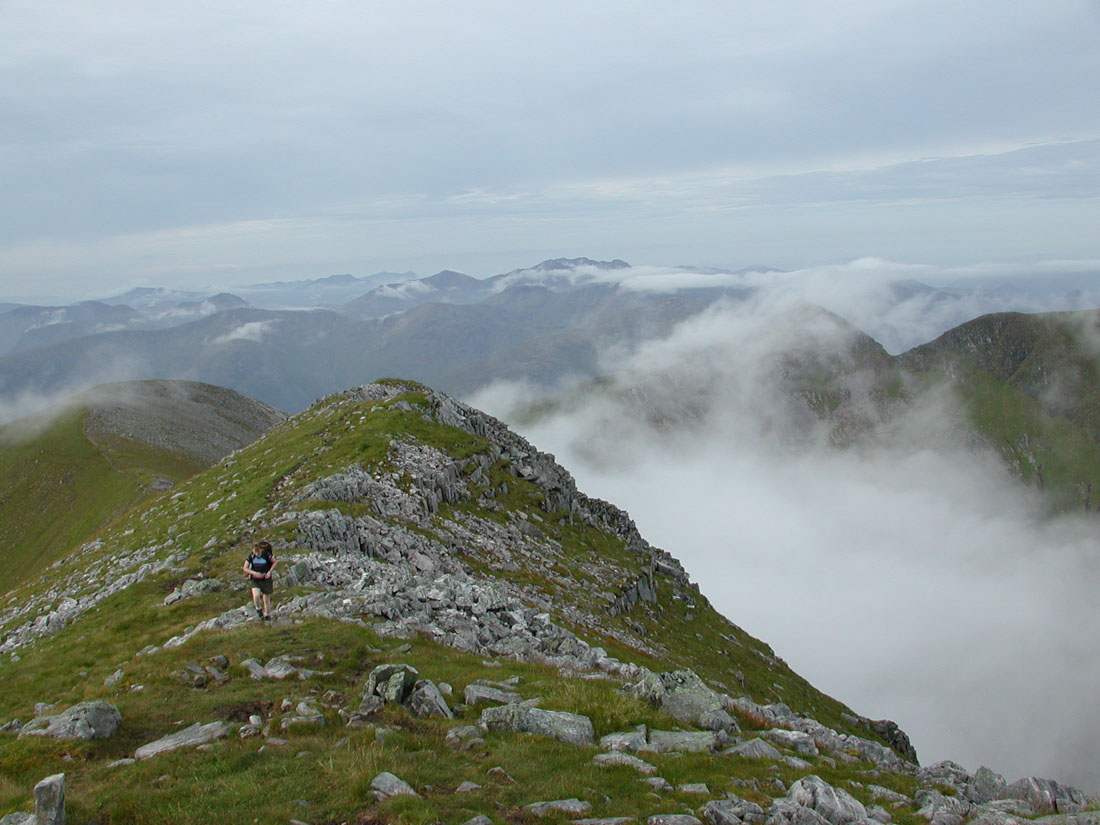 Had a break and some food on Binnein Mor – the only fly in the ointment was the presence of midges. A dull, still day is their preferred environment. 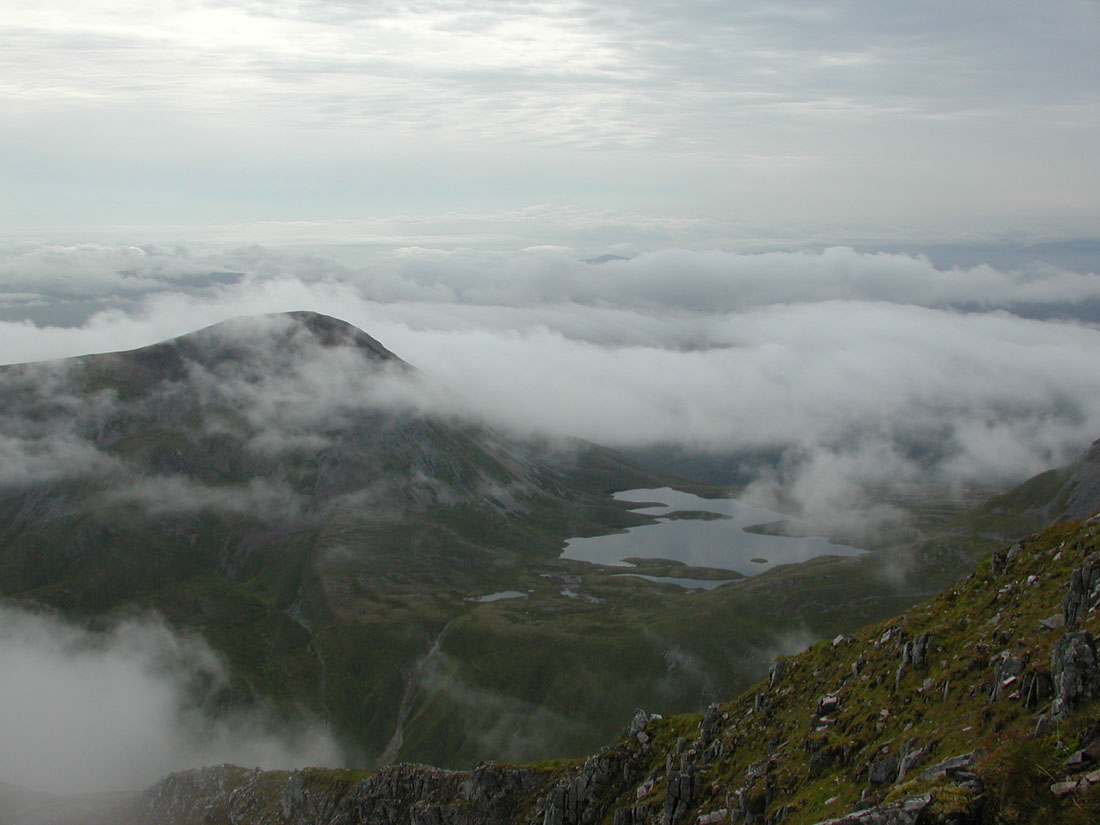 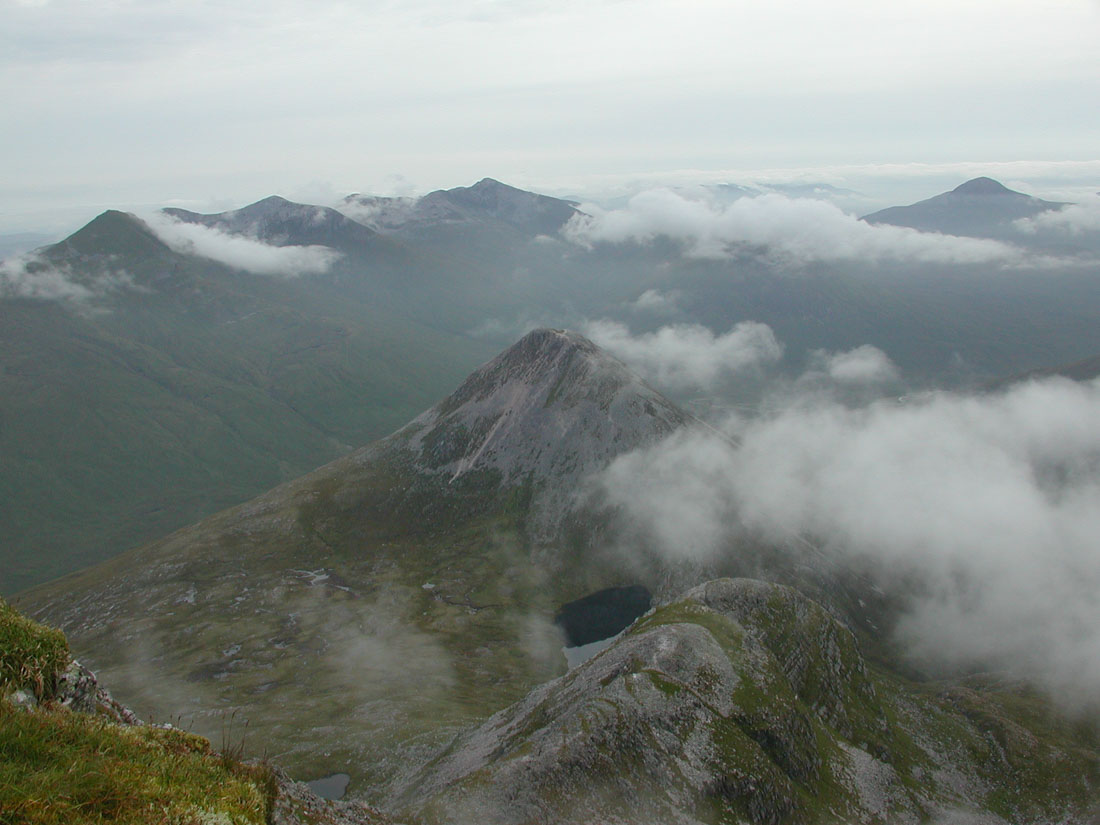 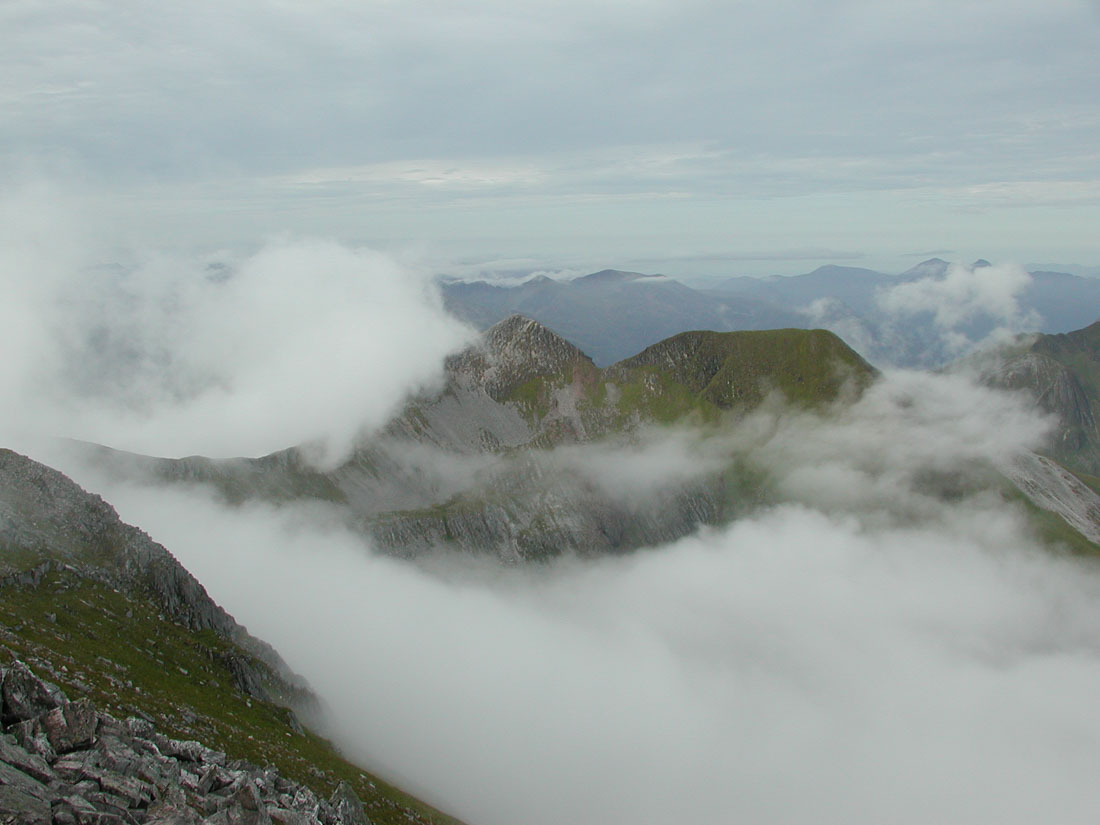 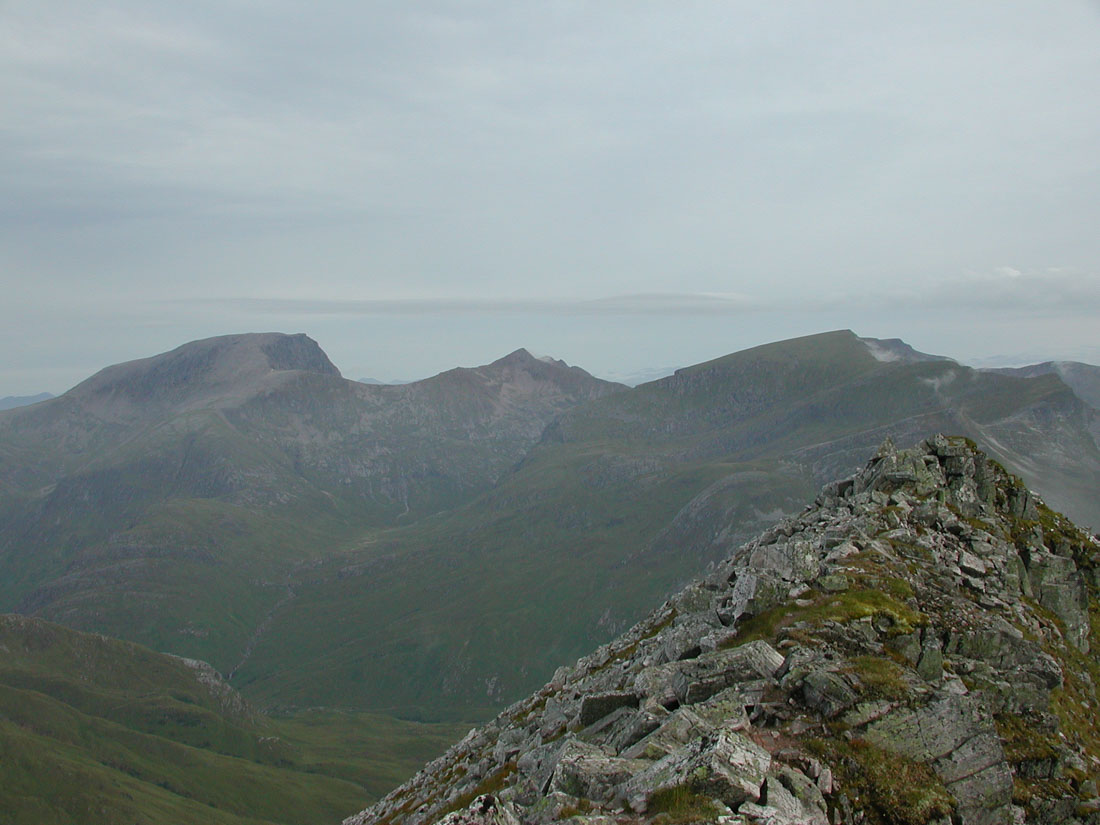 Headed onwards, back down the south ridge of Binnein Mor and then across the ridge to Na Gruagaichean. The rock striations on the flank of Na Gruagaichean were very obvious. 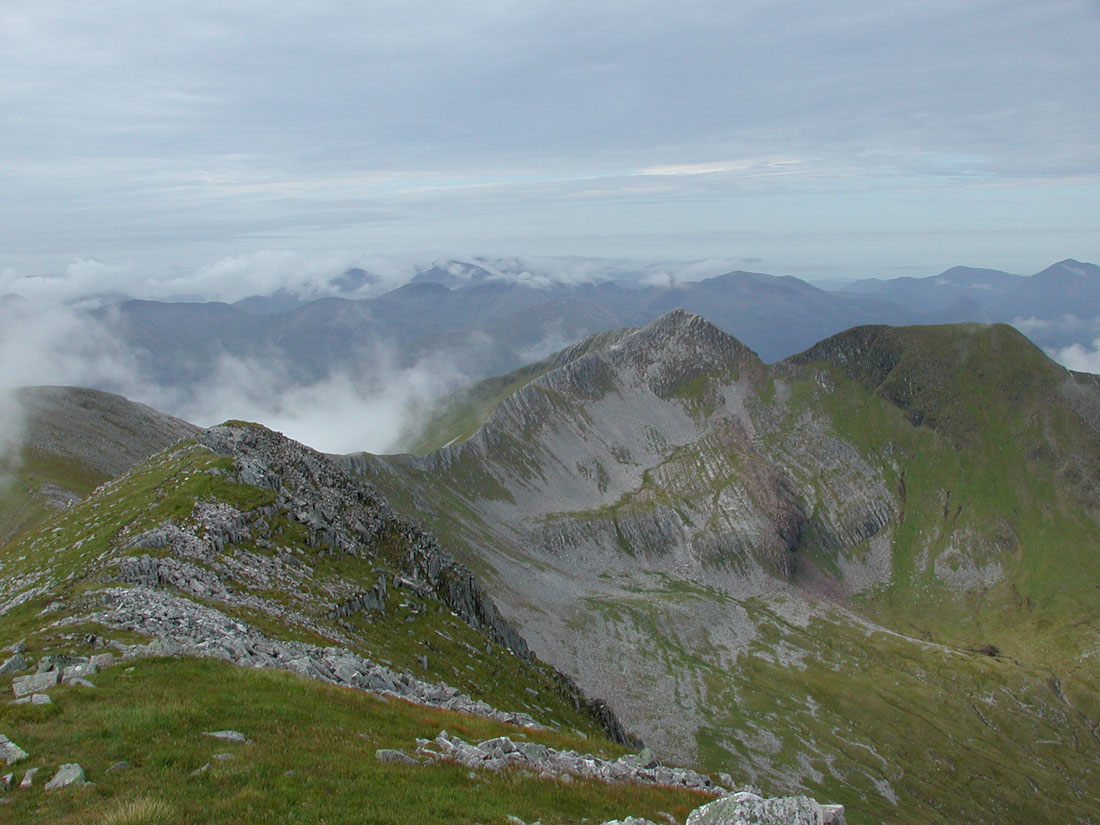 The day was clearing nicely for us, the grey clouds evaporating. Down below Na Gruagaichean we could see Kinlochleven. 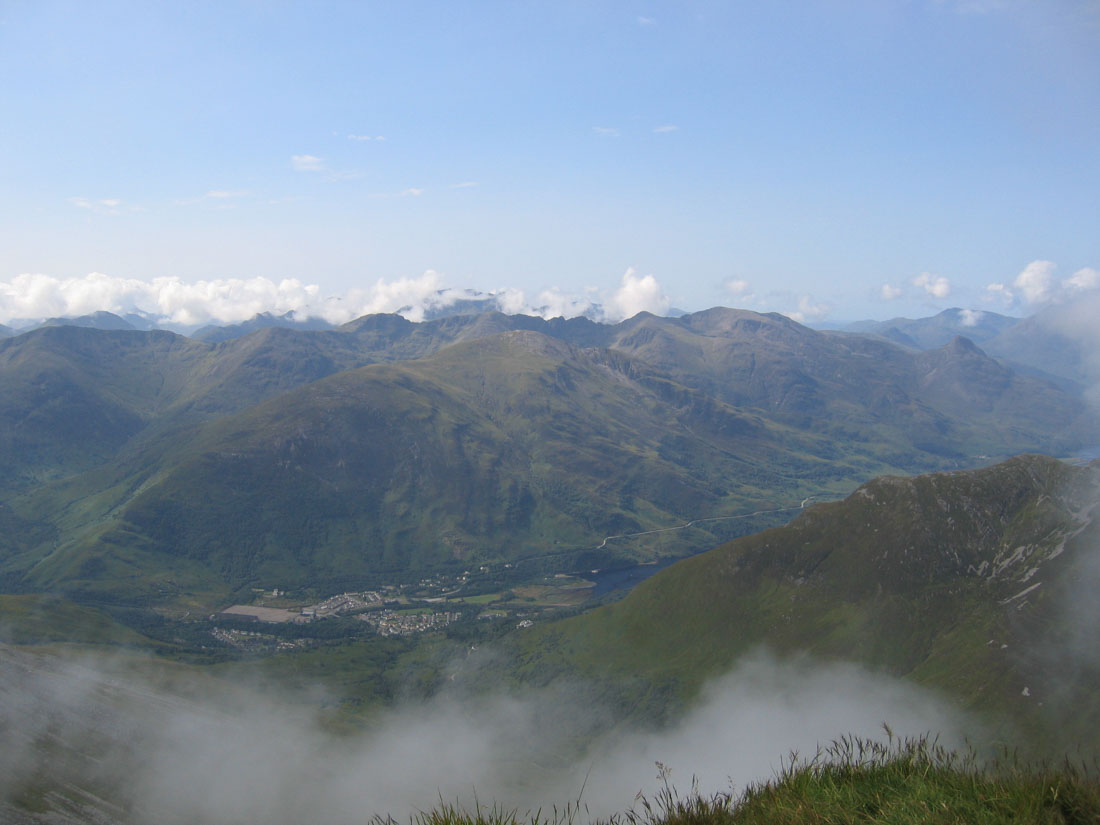 Descended down the steep and loose drop from the south top of Na Gruagaichean and then over the north top, and on to Stob Coire a Chairn. 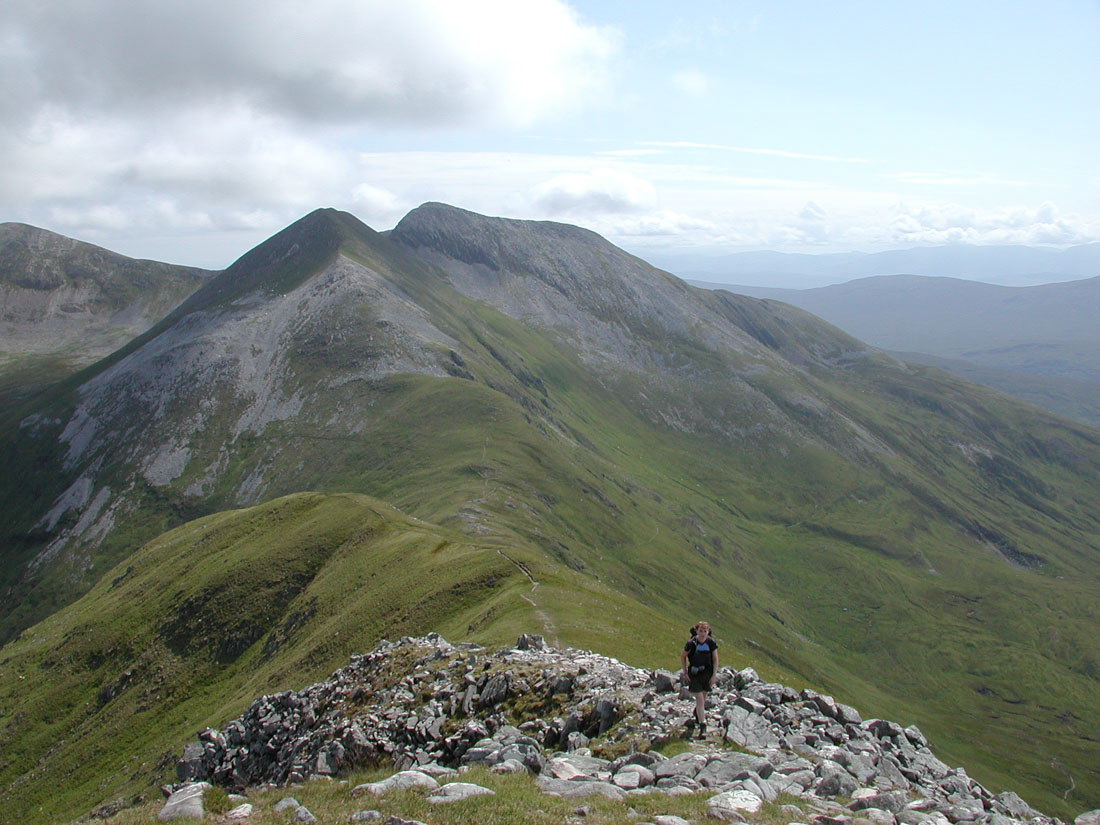 It’s nice the ways the views shift and develop moving through the Mamores.

An Garbhanach and the Ben 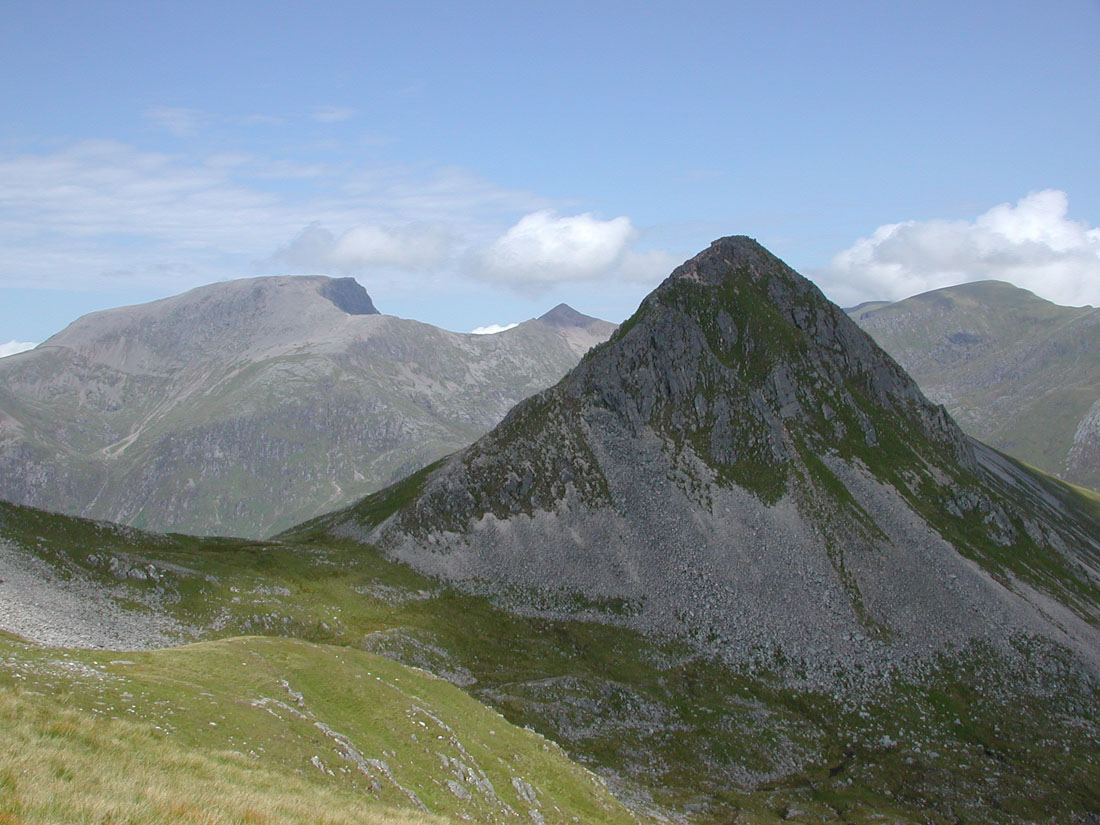 Reached the top of Stob Coire a Chairn and had another break. A nice warm sunny day by this point. We’d joined the Ring of Steall route by this point, which we’d been round a couple of times before so the views were familiar.

Mamores from Stob a Coire Chairn

Ben Nevis and arete from Stob Coire a Chairn 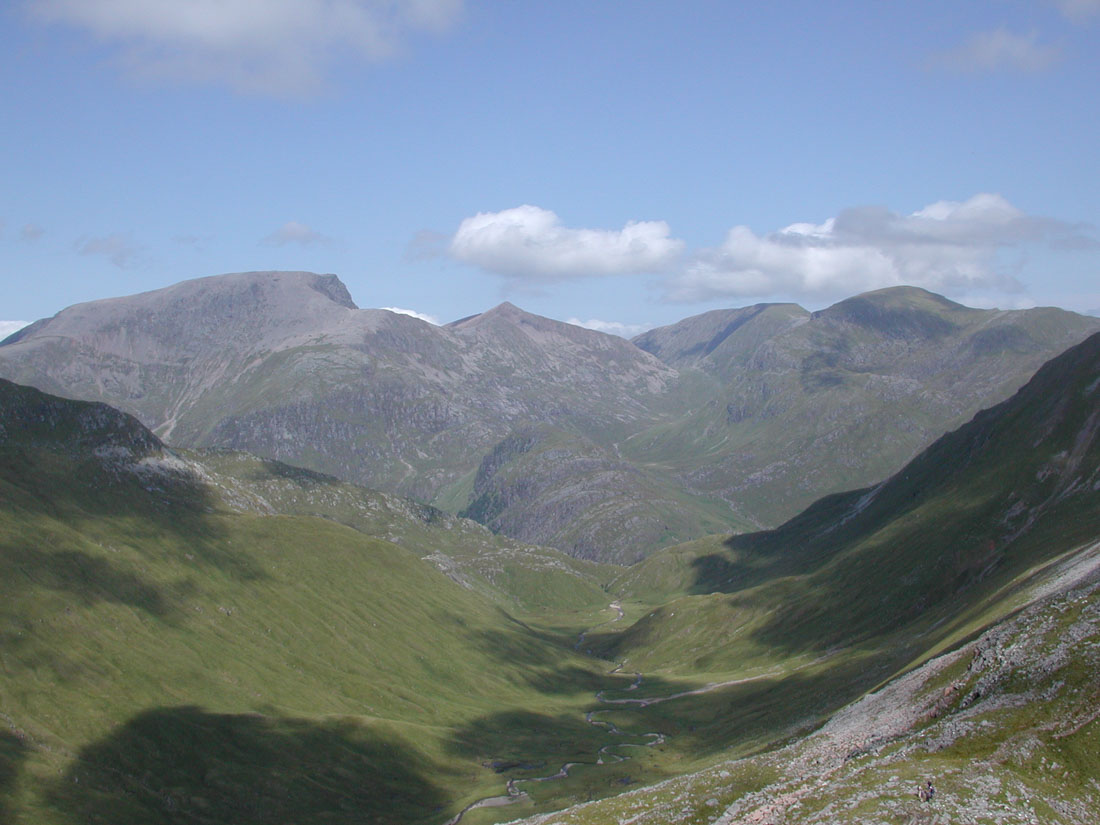 Devils Ridge and Stob Ban from Stob Coire a Chairn 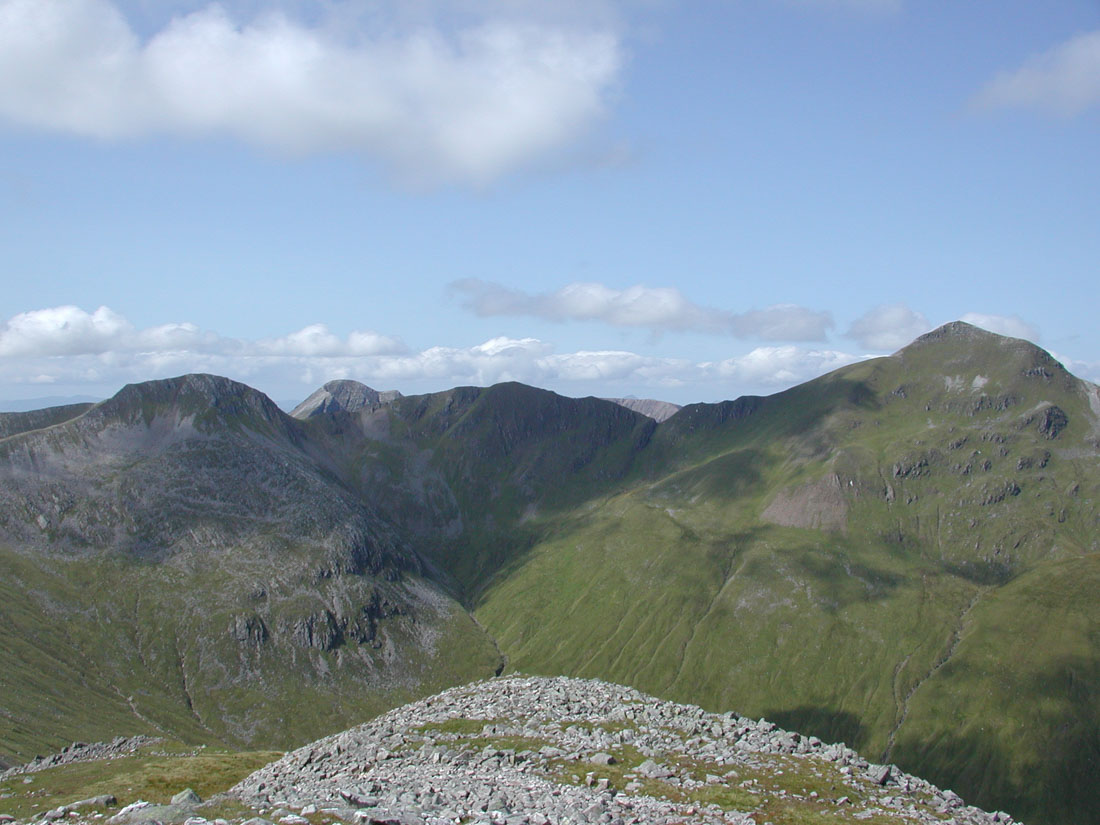 Onwards to Am Bodach, a rather steep climb but once there the views across towards Loch Linnhe improve. In 2004 Ardgour and Mull were still Terra Incognita. 😉

Stob Ban and Mullach from Am Bodach 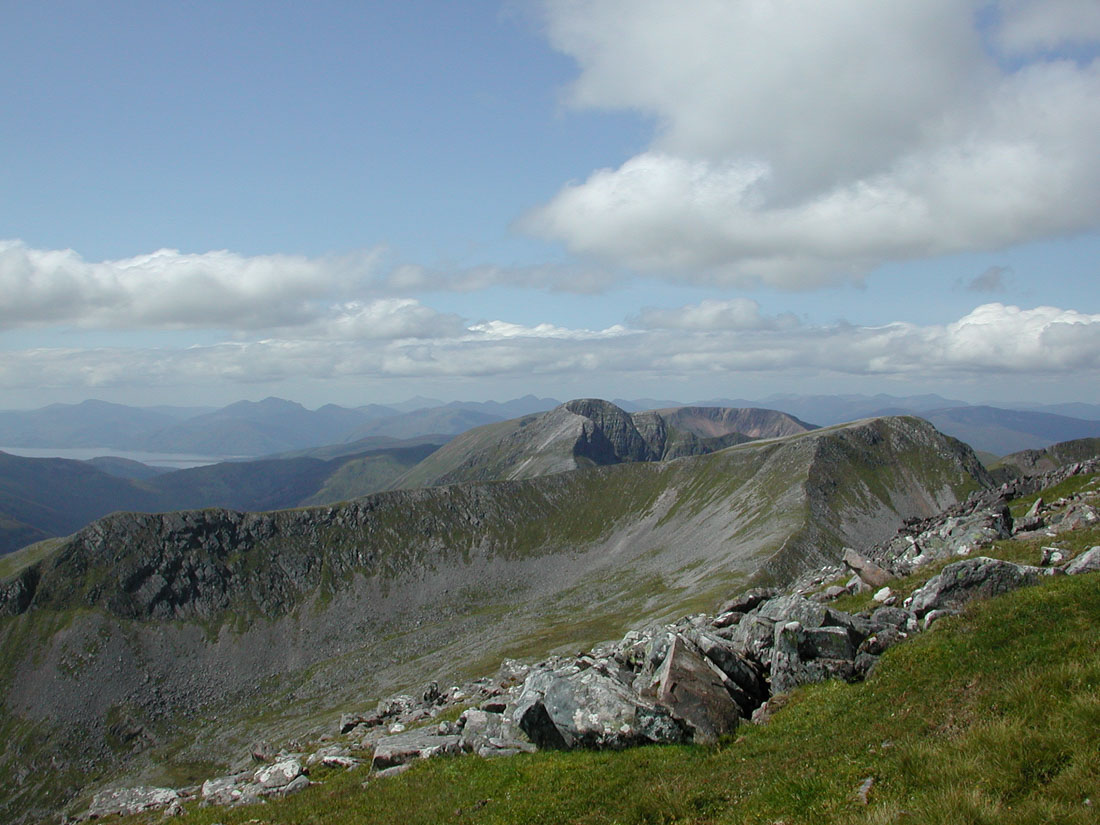 We headed up Sgurr an Iubhair and enjoyed the view to Stob Ban, perhaps the most attractive of the Mamores.

Stob Ban from Sgurr an Iubhair 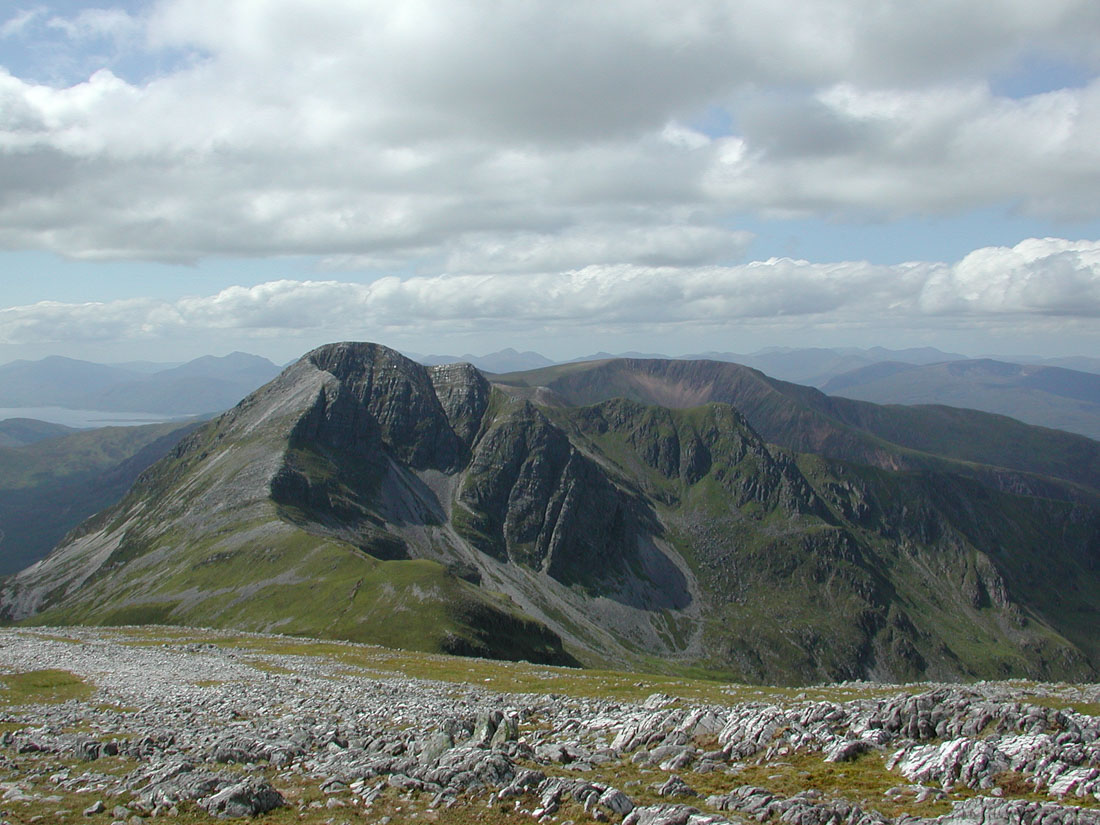 …and back across the terrain we’d covered. 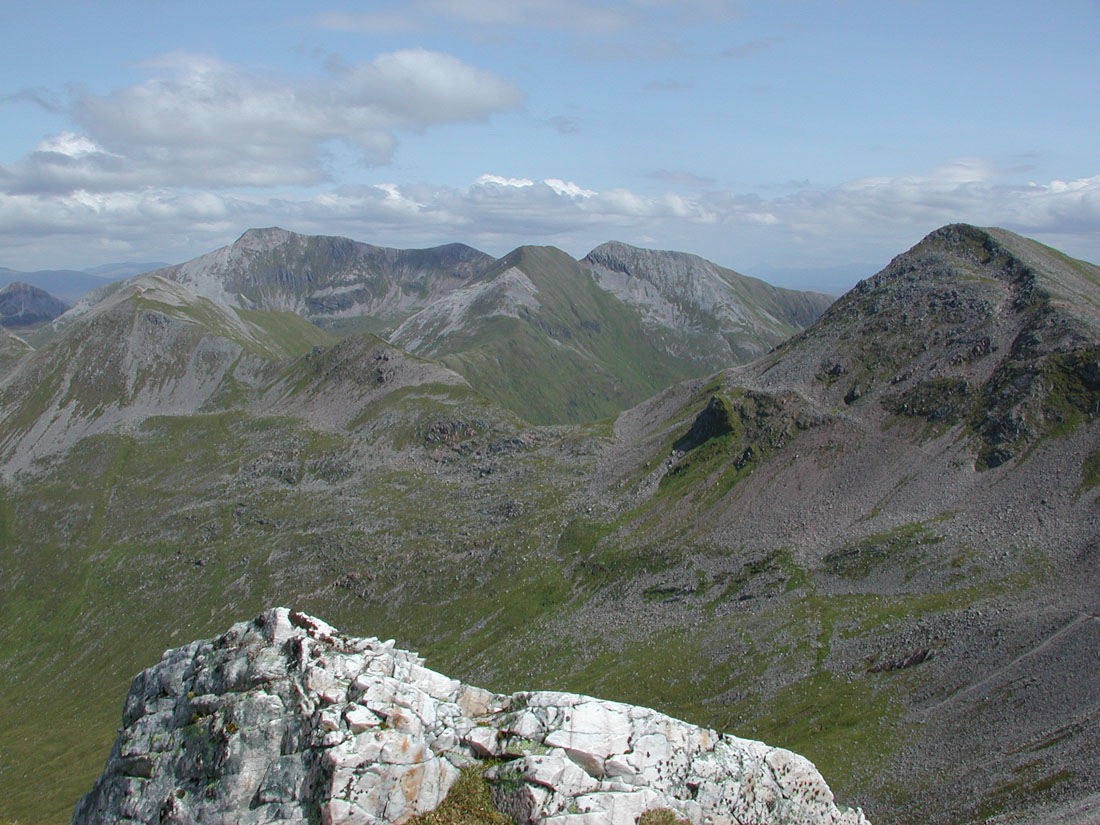 From Sgurr an iubhair we backtracked to the bealach with Am Bodach, and then dropped downhill into Coire na h-Eirghe, seeking the stalkers path running down to the West Highland Way.

The odd distraction on the way – this year’s amphibans developing. 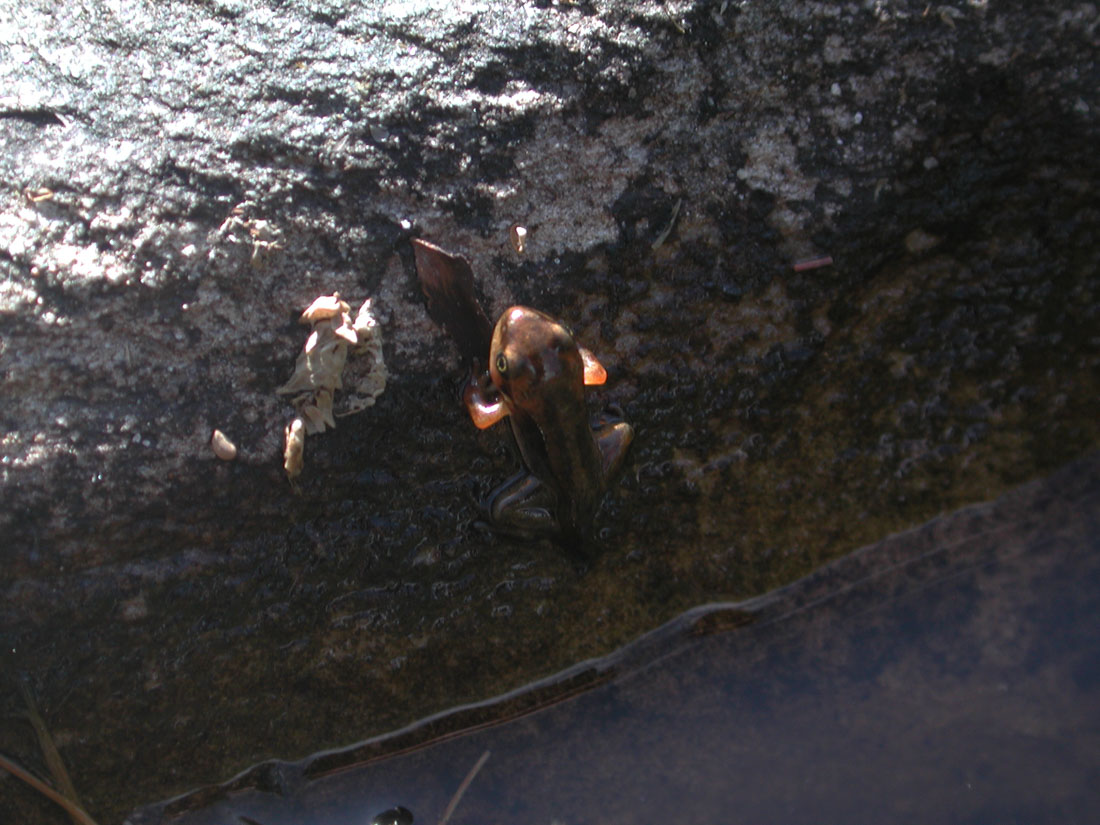 …and the summer is the time to admire the insectivores. Dragonflies are a personal favourite. 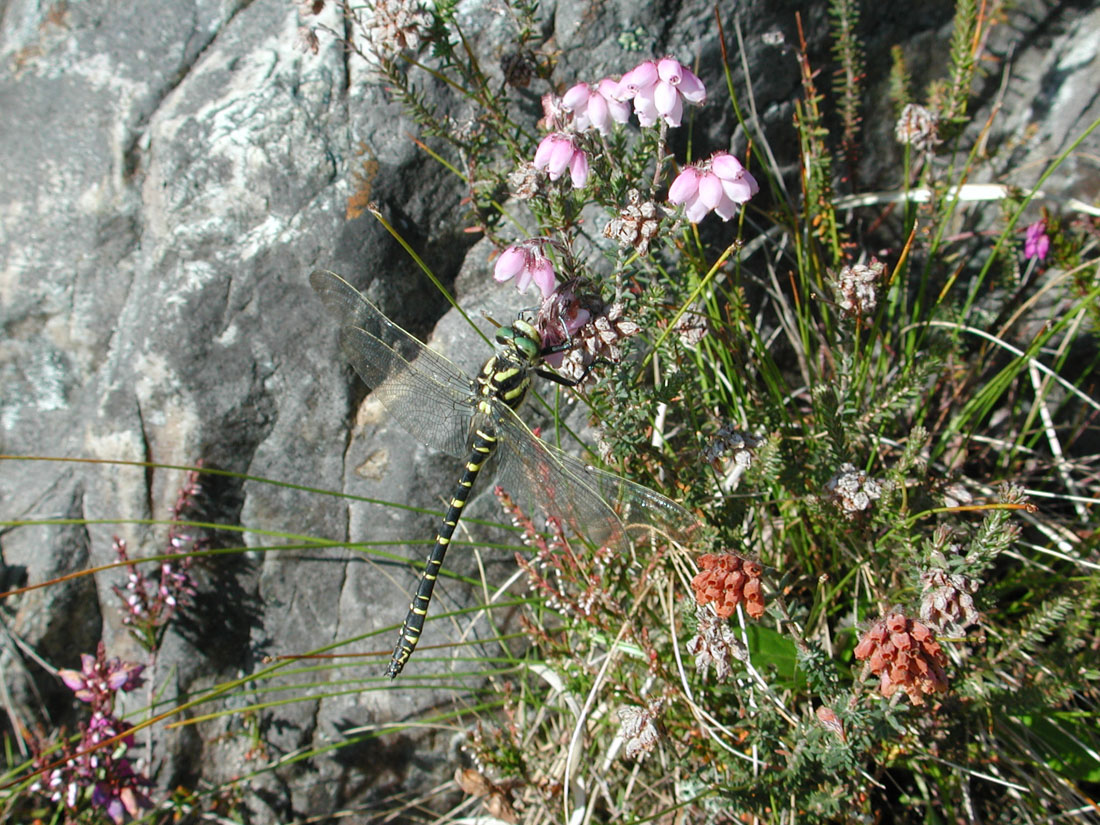 Once back at Mamores Lodge there was a nice view of Loch Leven. 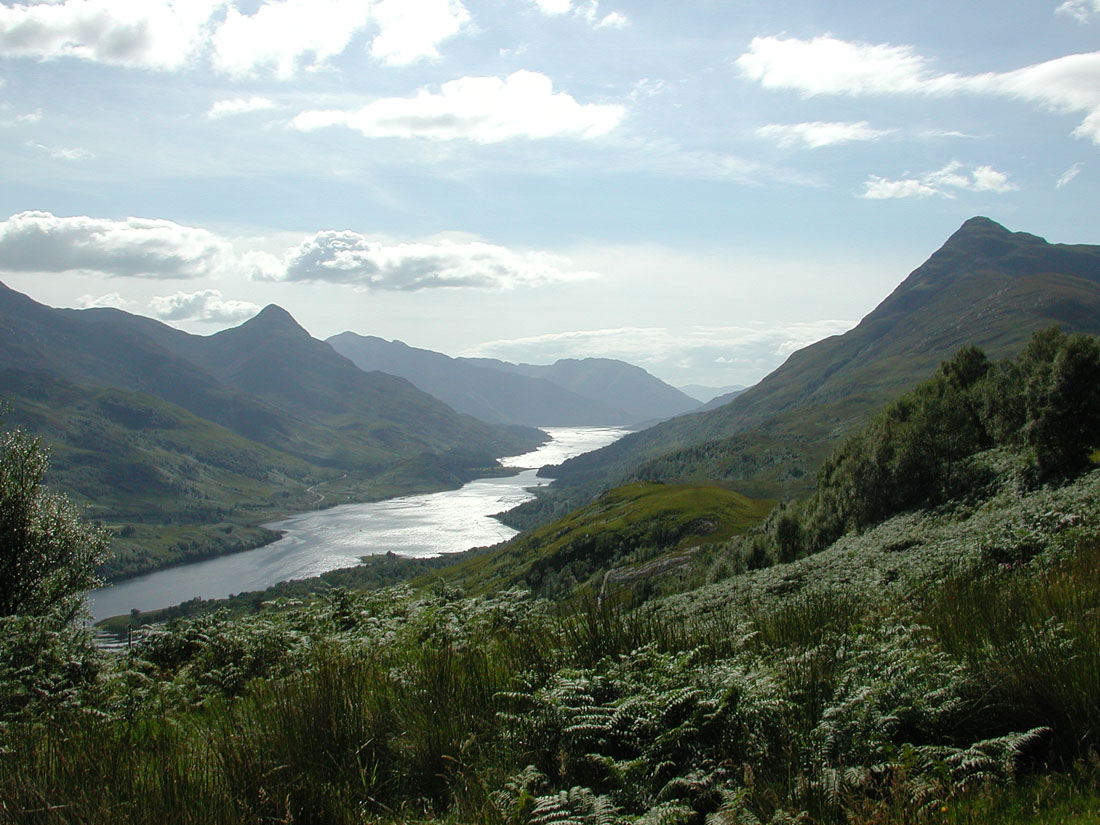 The view up to our walk was nice too. 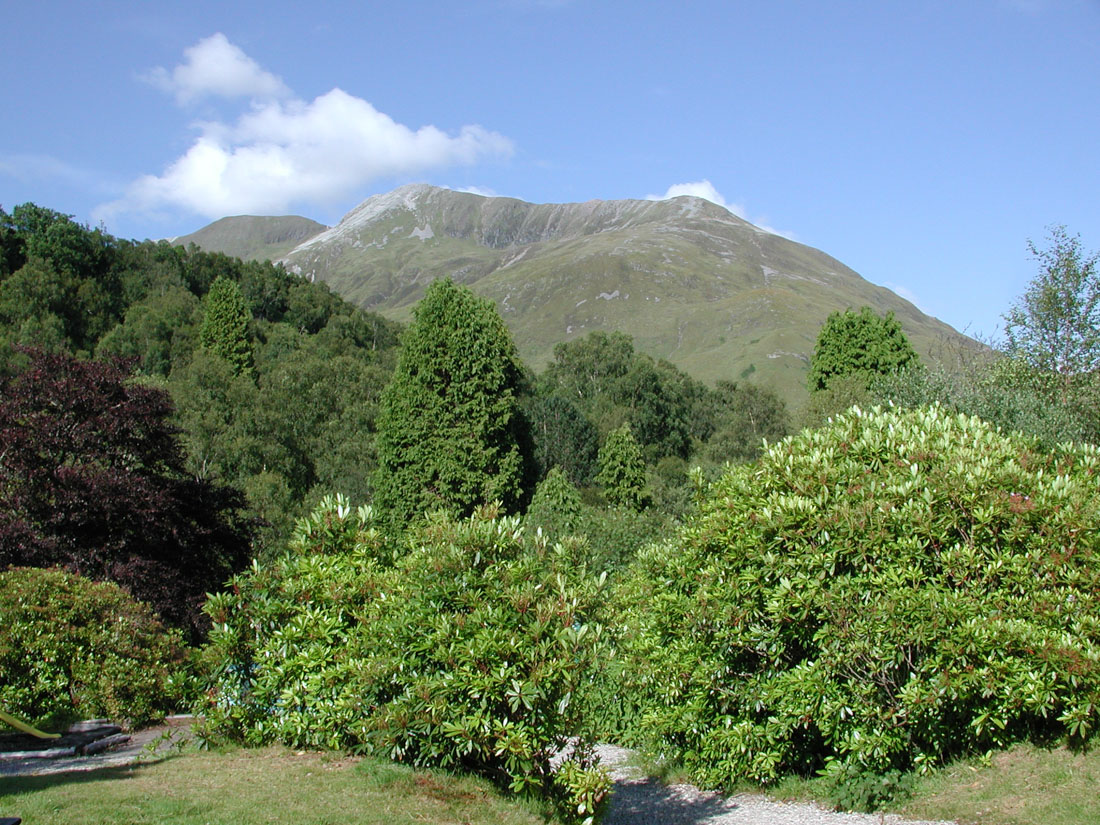 A cracking area. We’ve only recently got back into it after several years absence.