A decent Saturday. The weekend before had been a very tiring, heavyweight summit camp of Ben Alder. A little thought was needed about camping gear so it was back to daywalks, Sunday had a rather less stellar forecast too.

We decided familiar ground was OK after a lot of new hills – so went back to the Mamores.

There have been only a very limited number of times that I’ve been out hillwalking without Hazel. One of those occasions had seen me head up Glen Nevis and then ascend Binnein Mor via its north ridge.

I’d liked this route, so we headed back together to repeat it.

Out before the crowds in Glen Nevis, such an attractive glen. In summer the sun gets in to it quickly, in stark contrast to dark winter when it almost gets no sun at all.

Sgurr a Mhaim from Glen Nevis 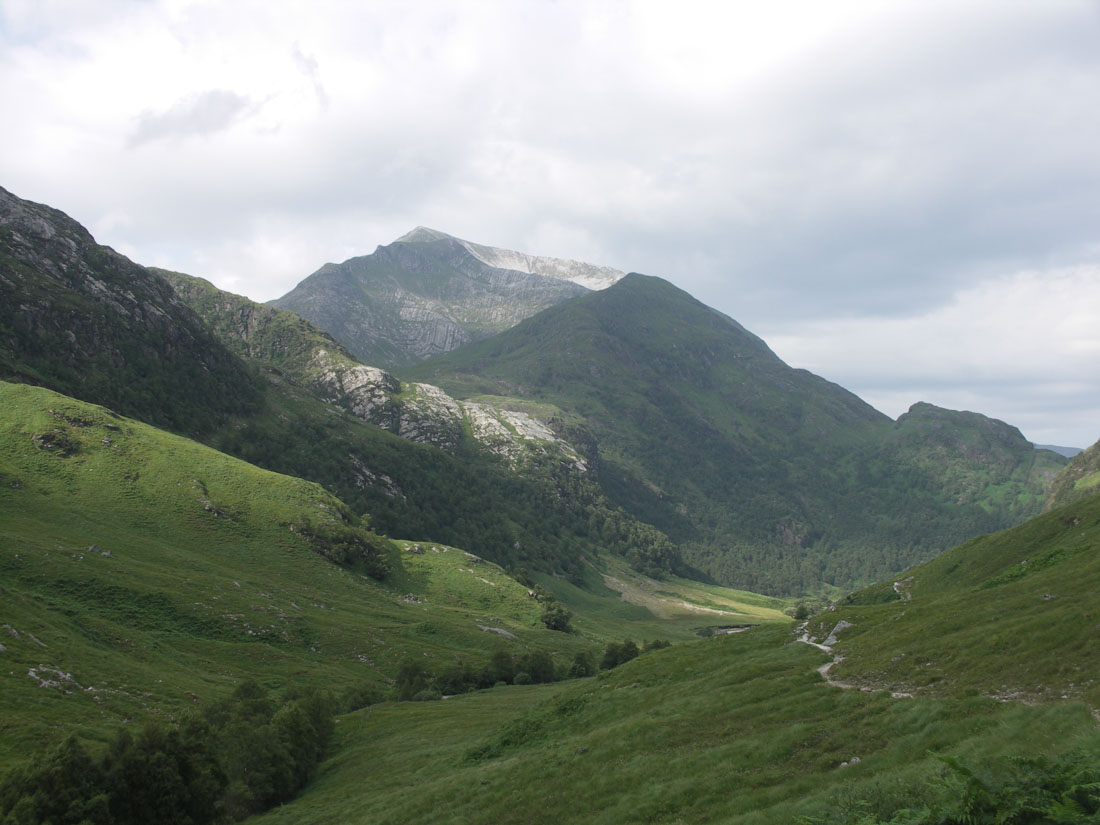 Headed out the Water of Nevis past the Steall ruin. The meadows are verdant in high summer with grasses and flowers. We love looking at summer flora. 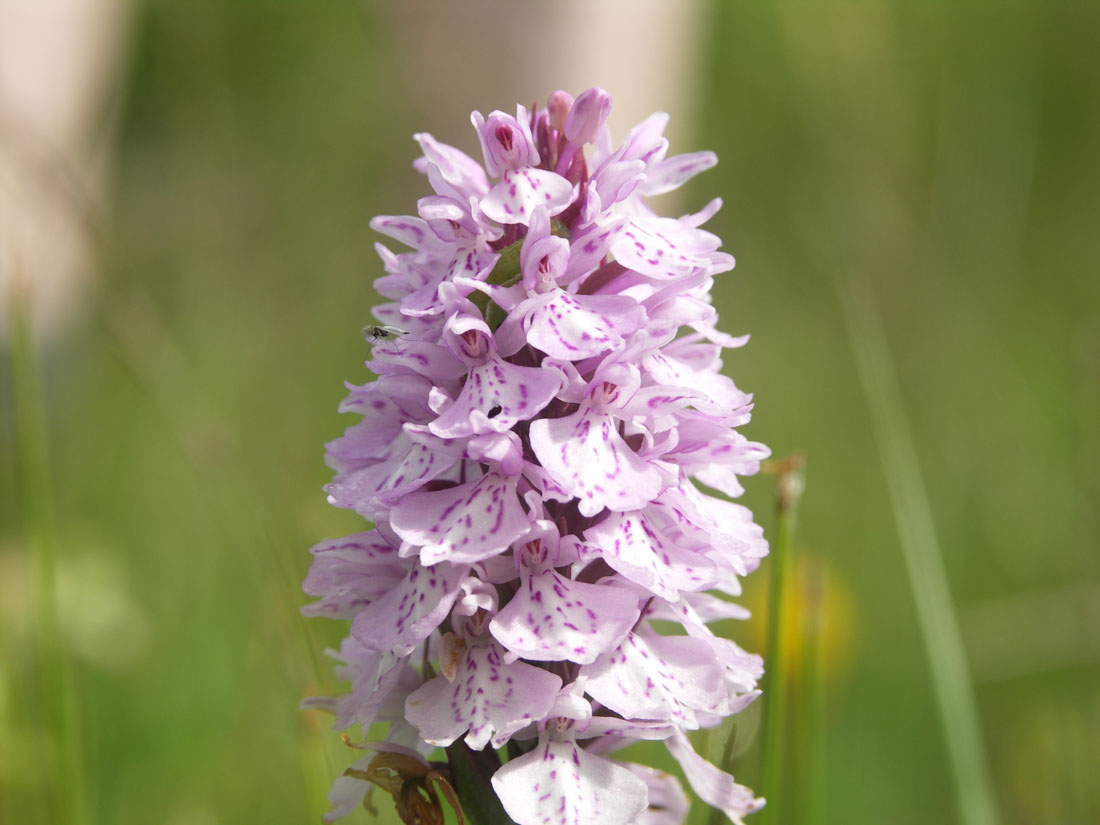 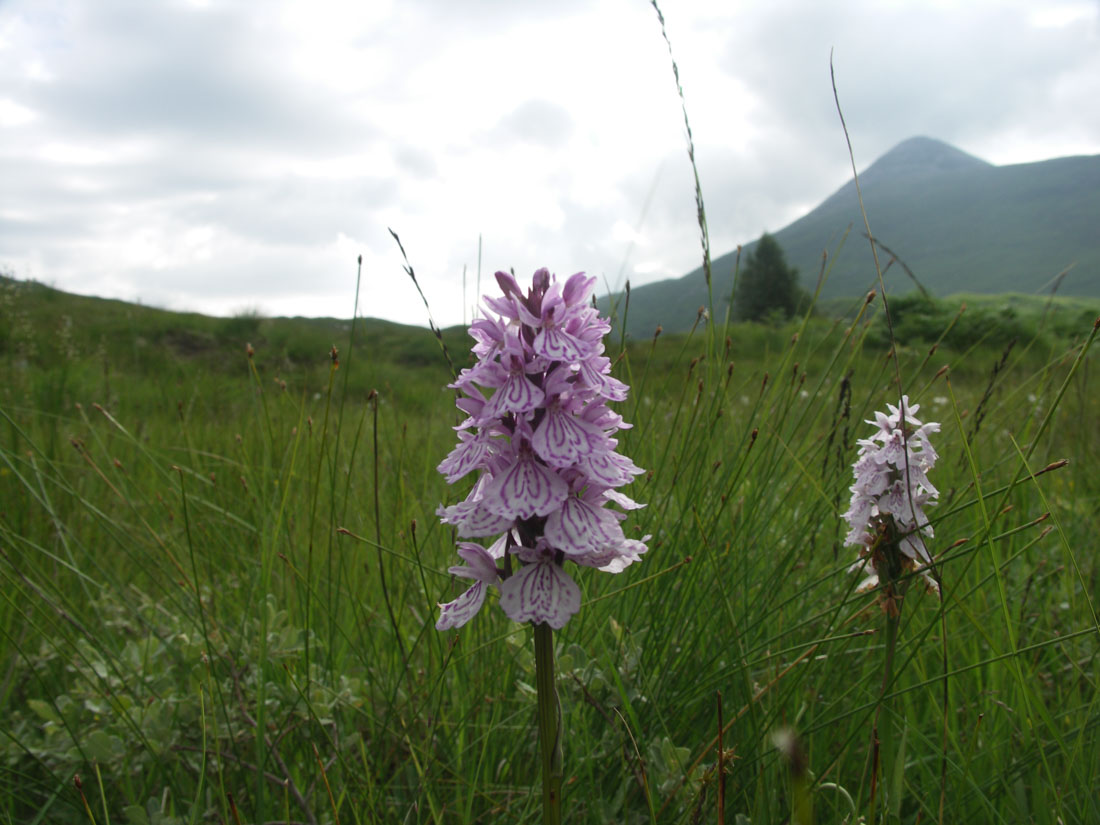 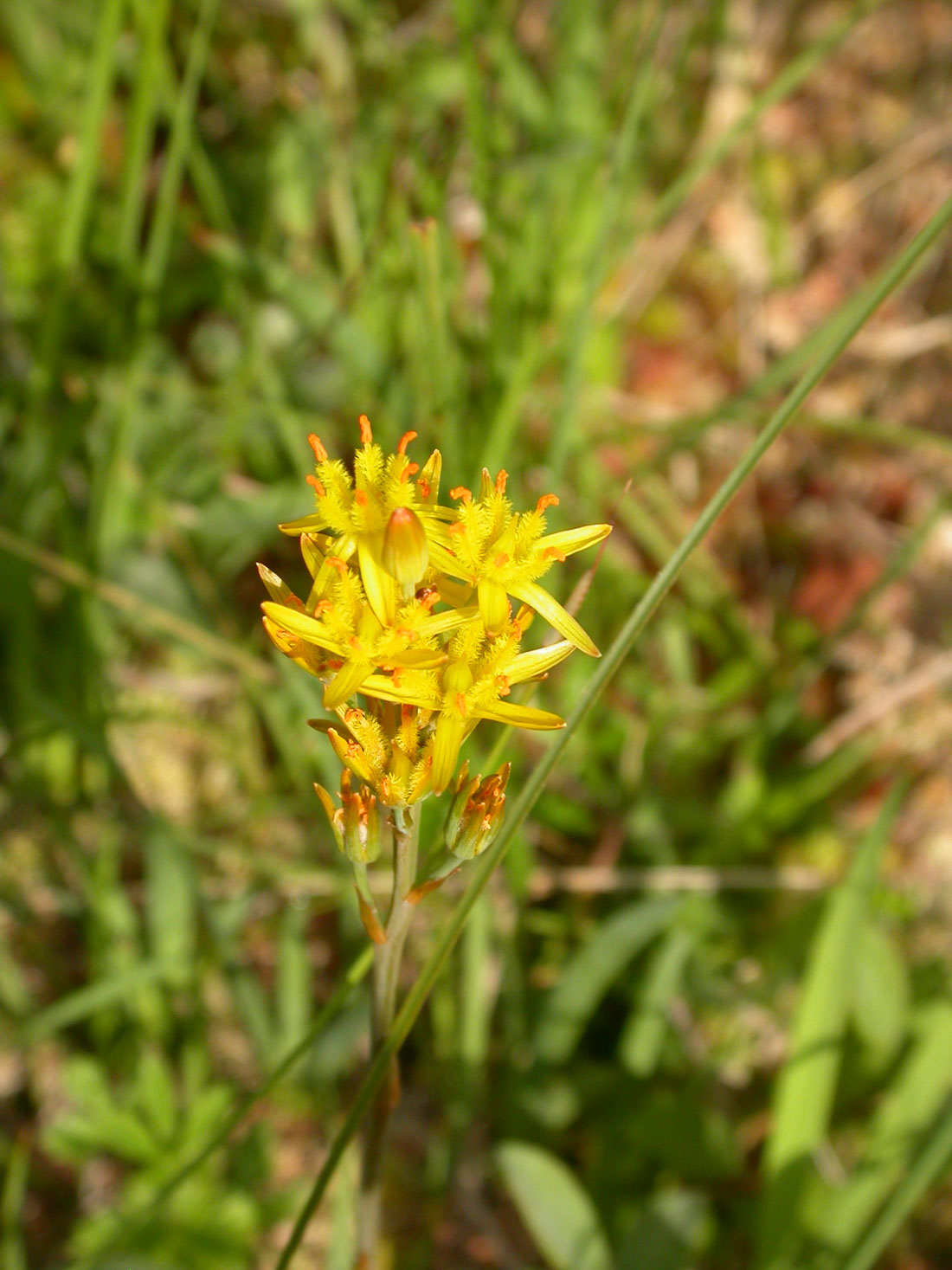 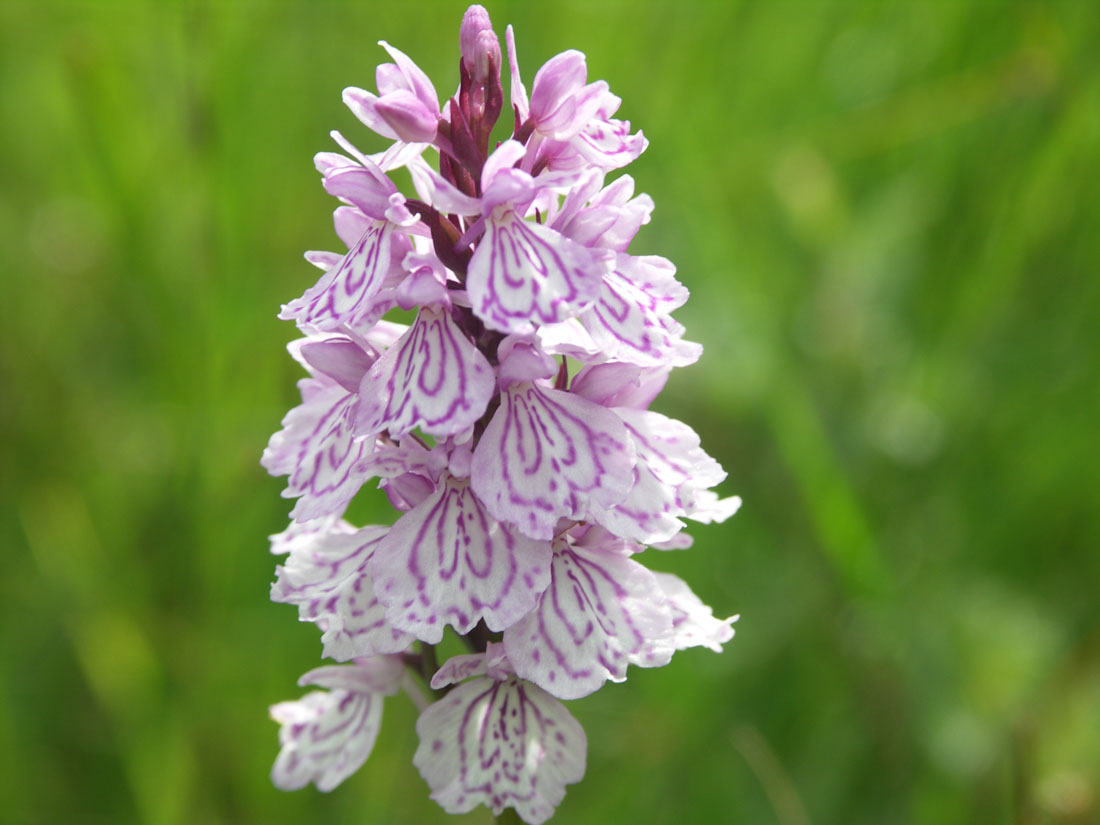 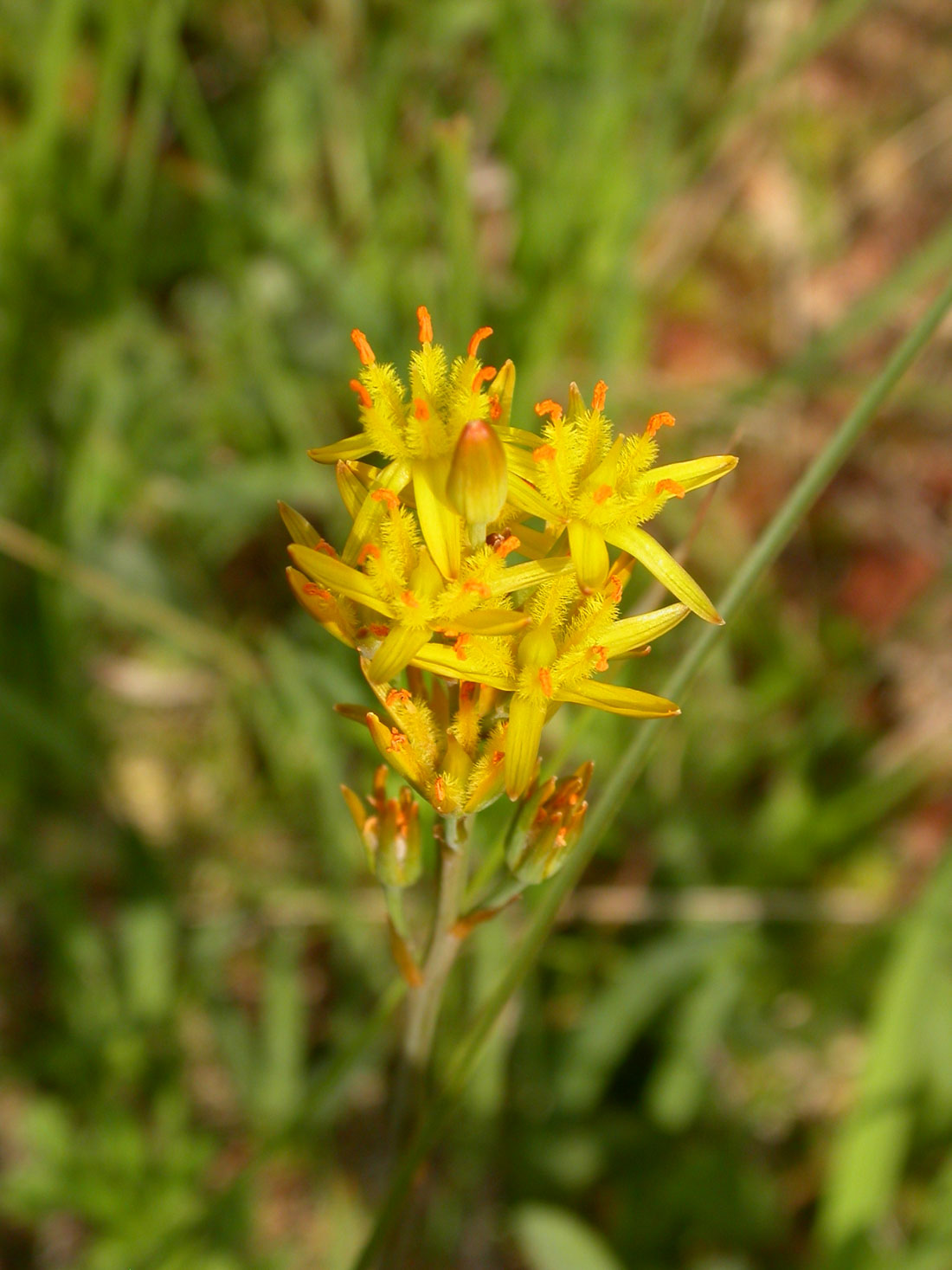 Forded the Water of Nevis and made our way uphill towards the north ridge of Binnein Mor. Behind us Sgurr a Bhuic and the Choinnichs become visible. 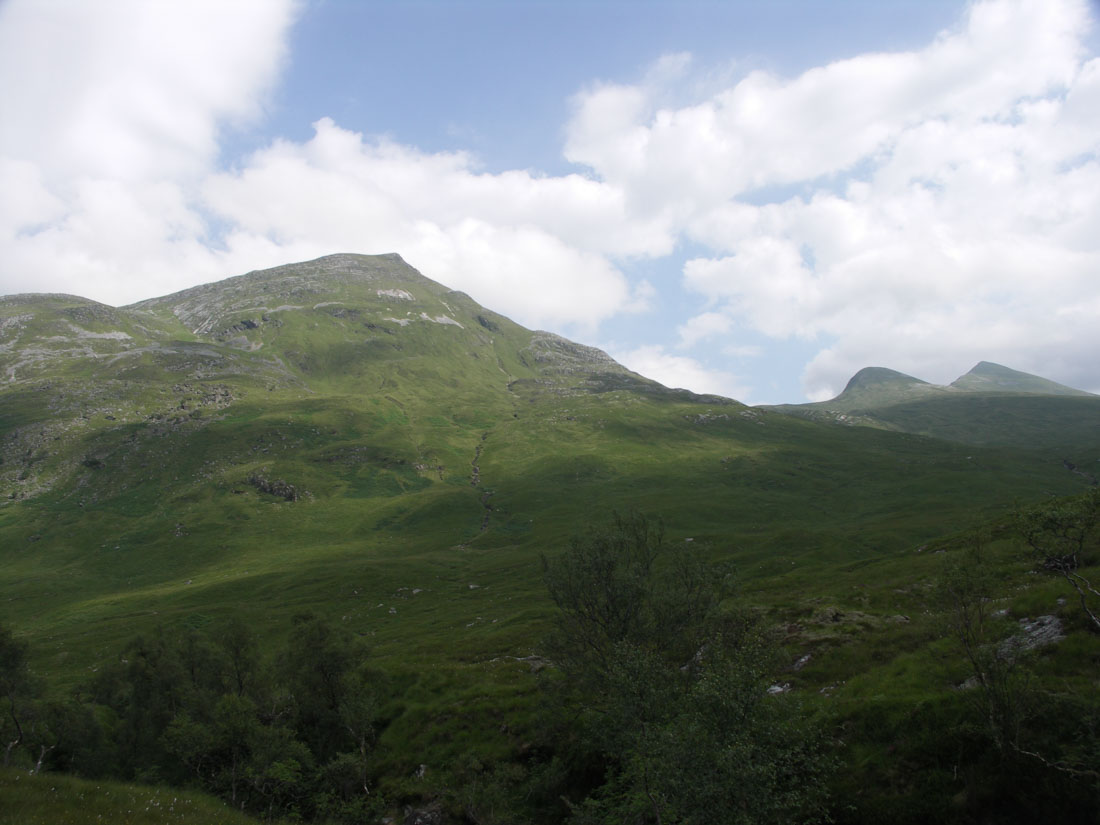 A little grassy in the lower reaches, by the time you’re looking across to Binnein Beag you’re on decent walking terrain. 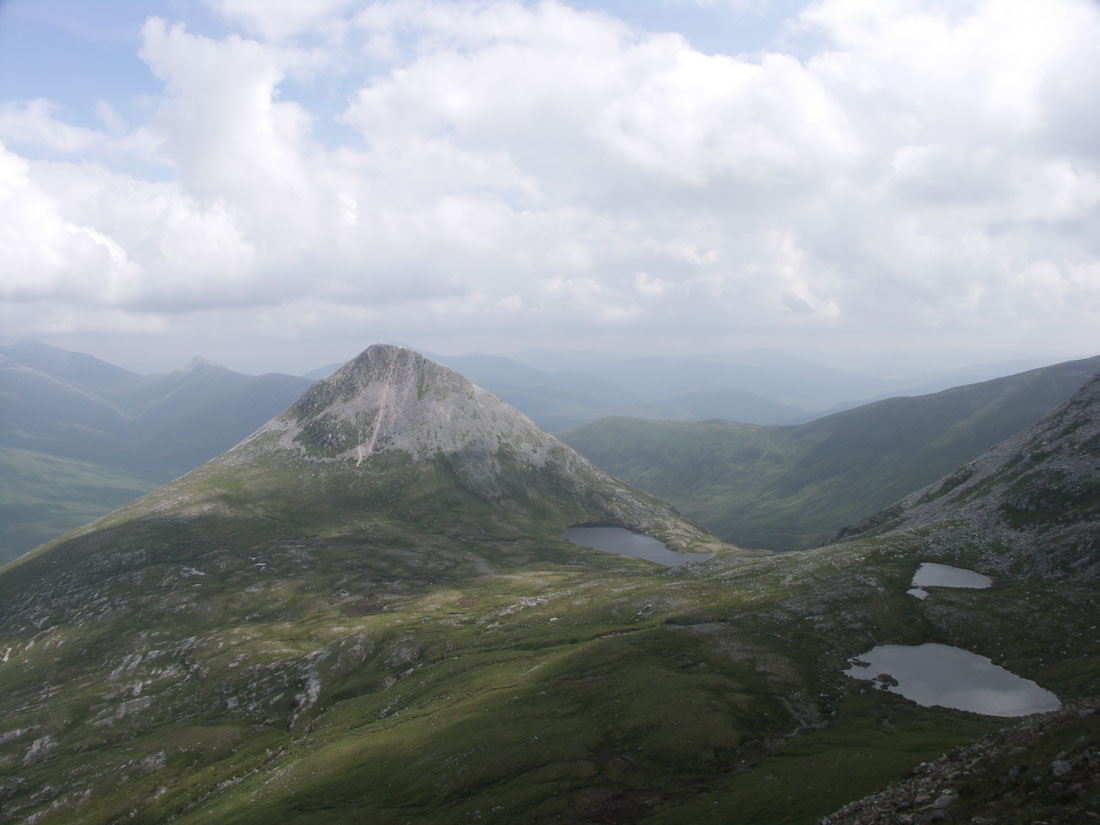 …and eventually you’re looking across to Aonach Beag. Despite 2 early visits a subsequently neglected hill for us.

H on Binnein Aonach Beag back 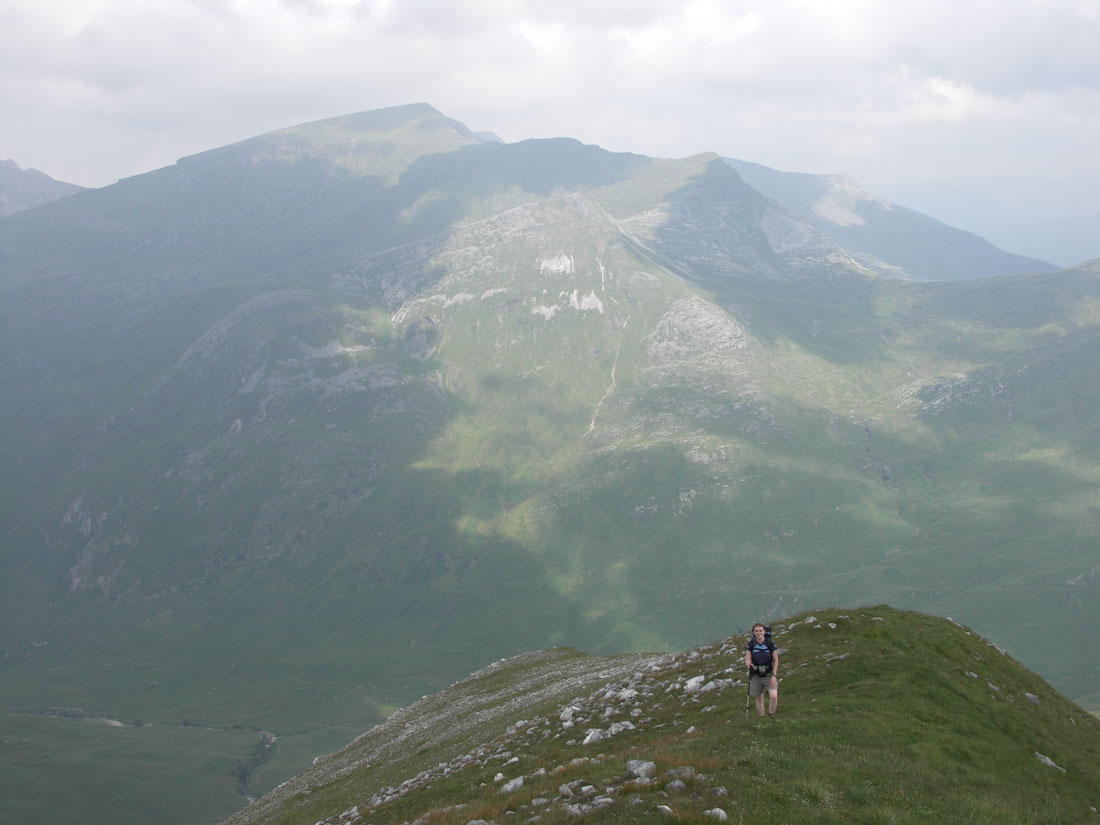 The ridge narrows down as the last 100m or so is reached. 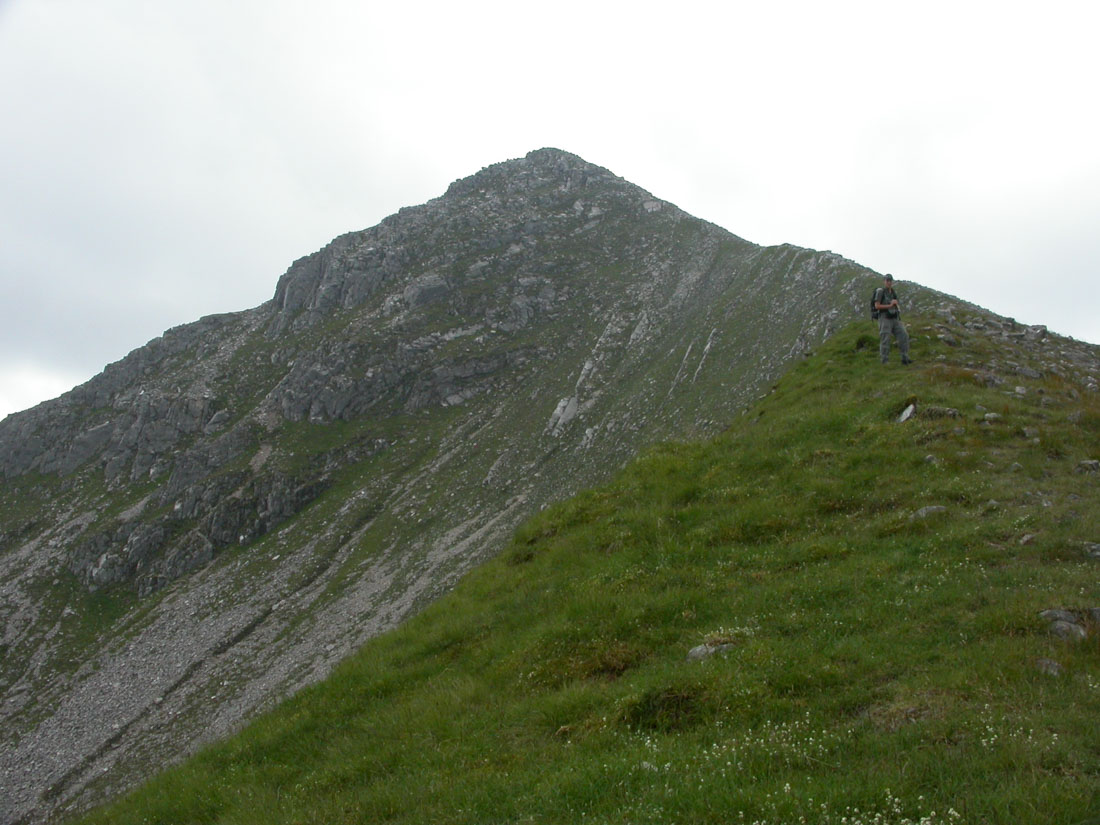 A slightly cloudy summer day – good view down to Binnein Beag. Looks too small to be a Munro from here. 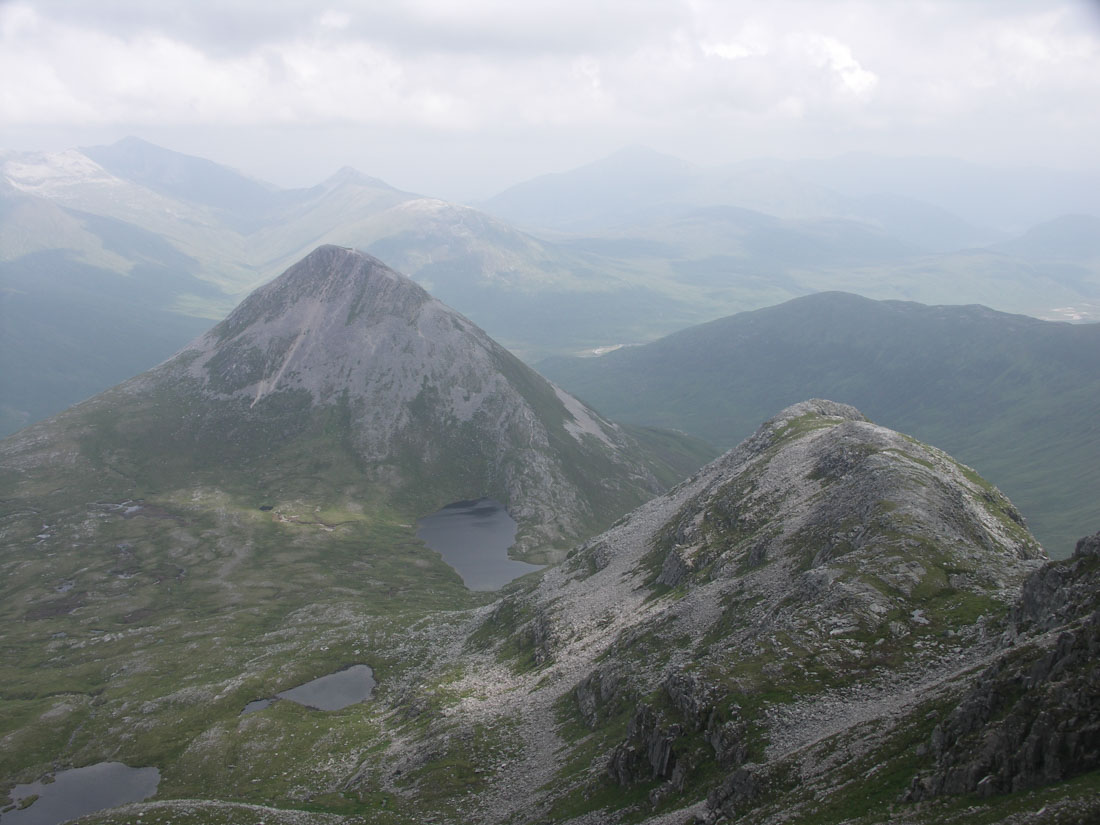 The lovely Coire an Lochain under Sgurr Eilde Mor and onwards to Blackwater Reservoir is finally seen from the summit. 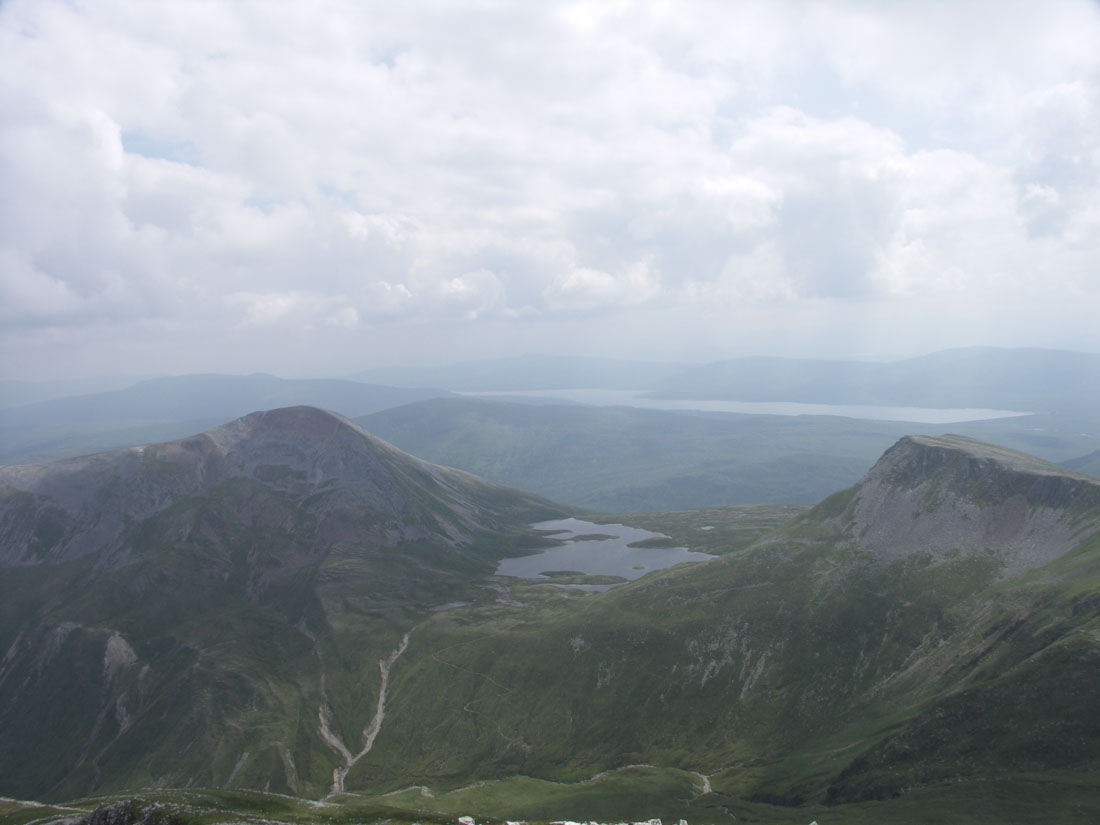 Had some lunch and then carried on from Binnein Mor to Na Gruagaichean. The high ridges of the Mamores are easy underfoot but dramatic to the eye. 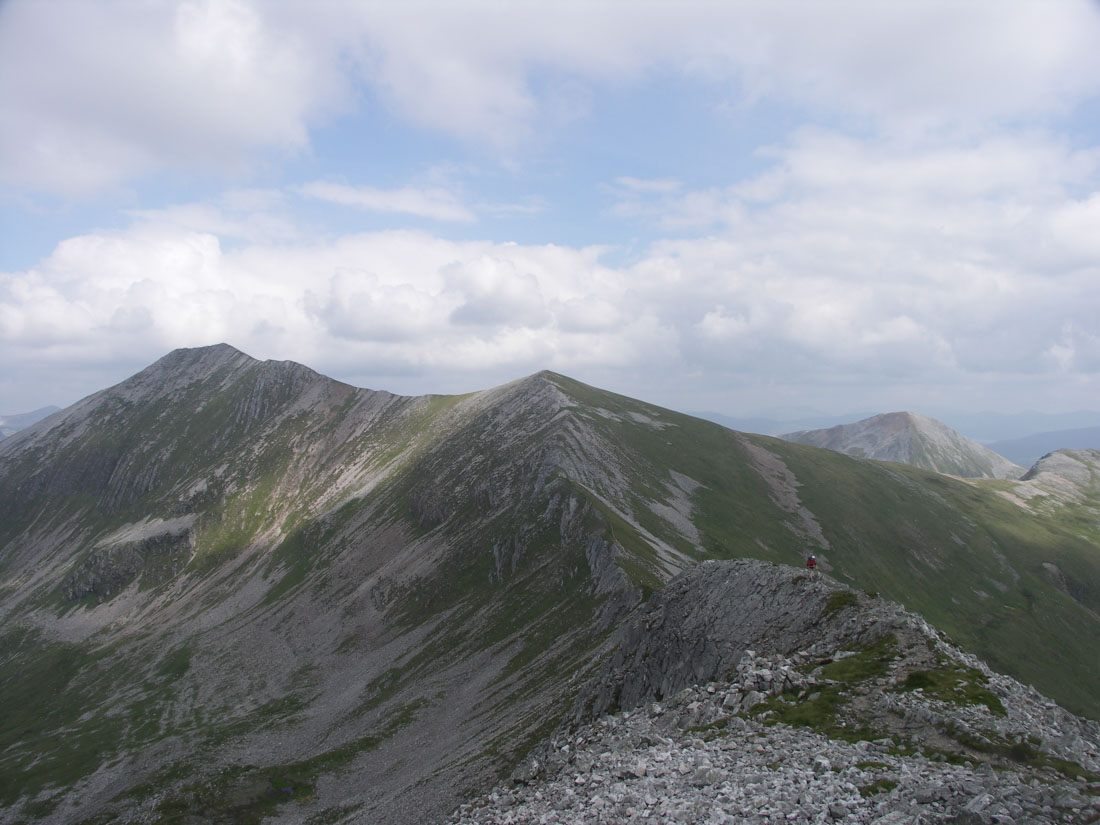 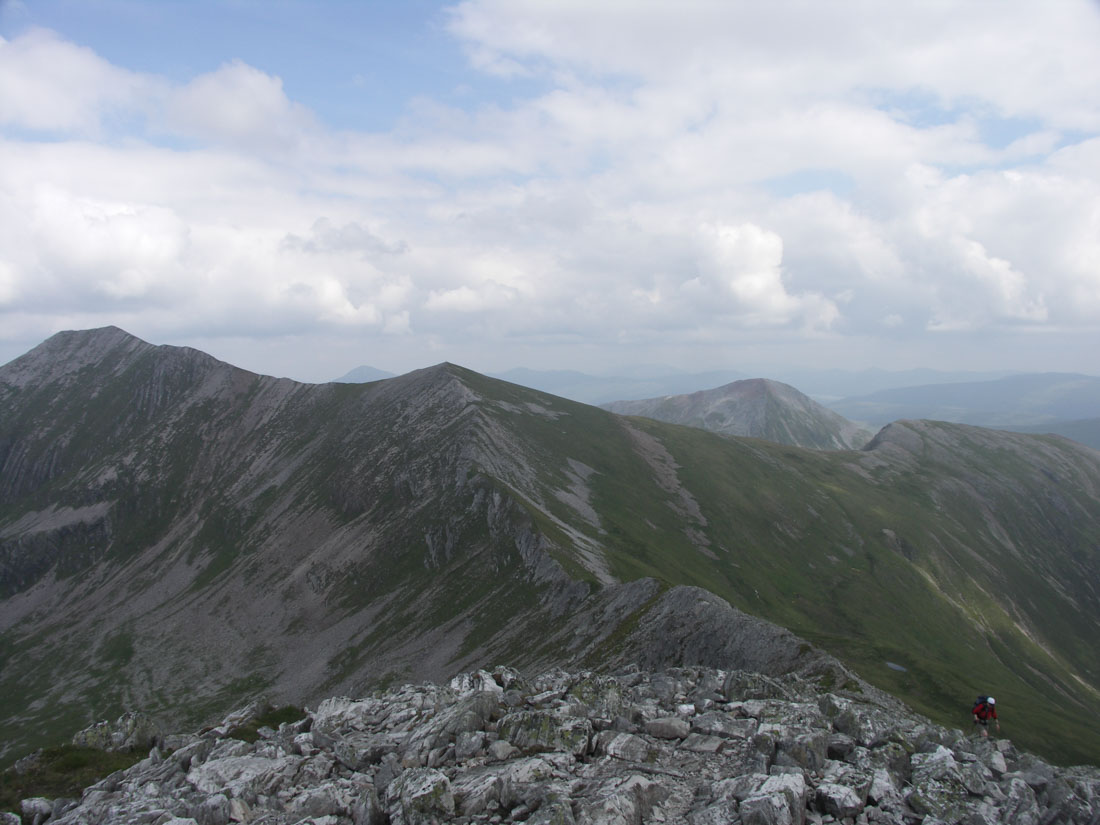 A better day for local views than distance….along loch Leven Beinn a Bheithir was hazy.

Am Bodach and Loch Leven from Na Gruagaichean 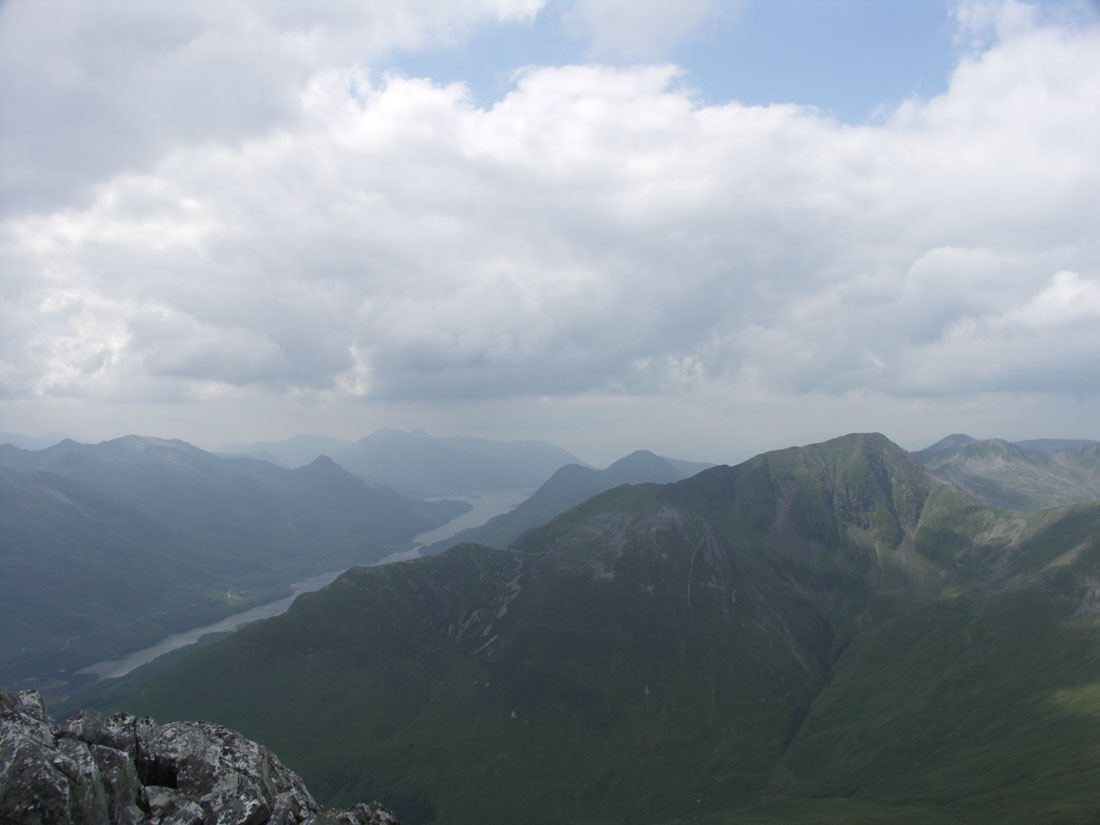 Steeply and loosely down from Na Gruagaichean’s S top and then over the N top. Carried on along the ridge to Stob Coire a Chairn.

Binnein Mor looks a long way up from here – off its flank the Grey Corries are visible. 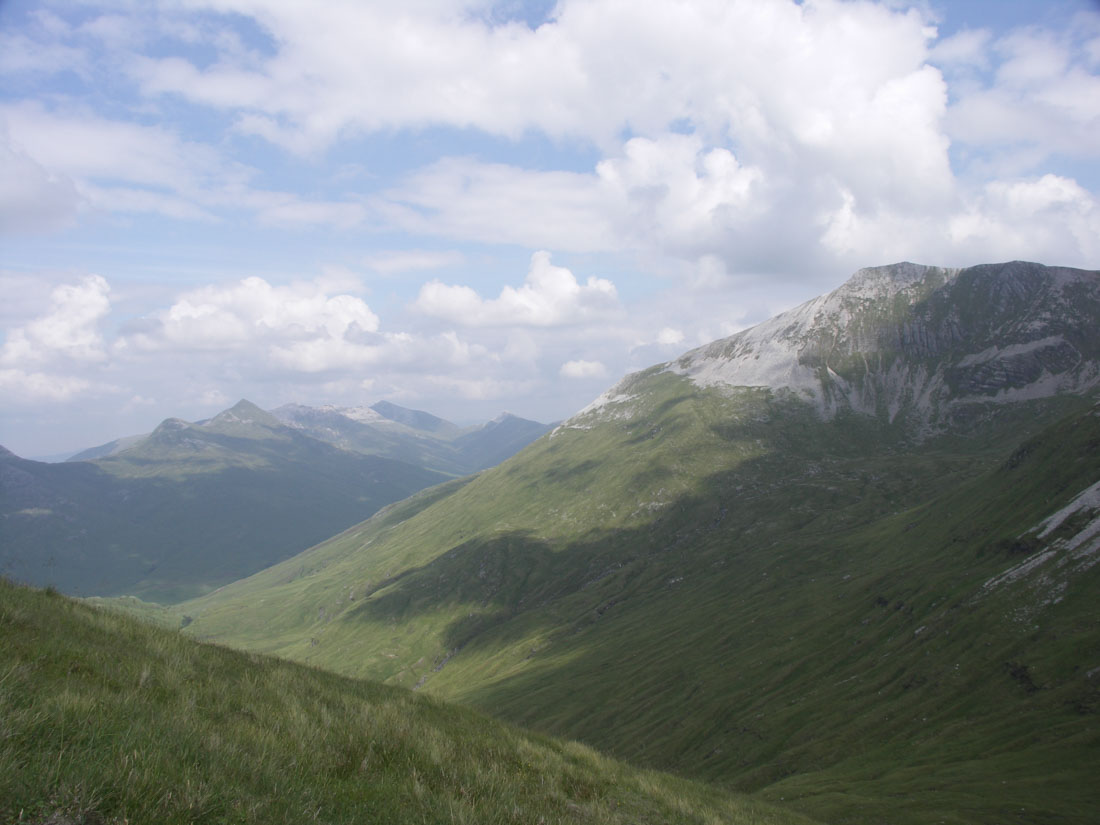 Plodded on wards along the SMC Red Route path.

H on ridge Binnein Mor back 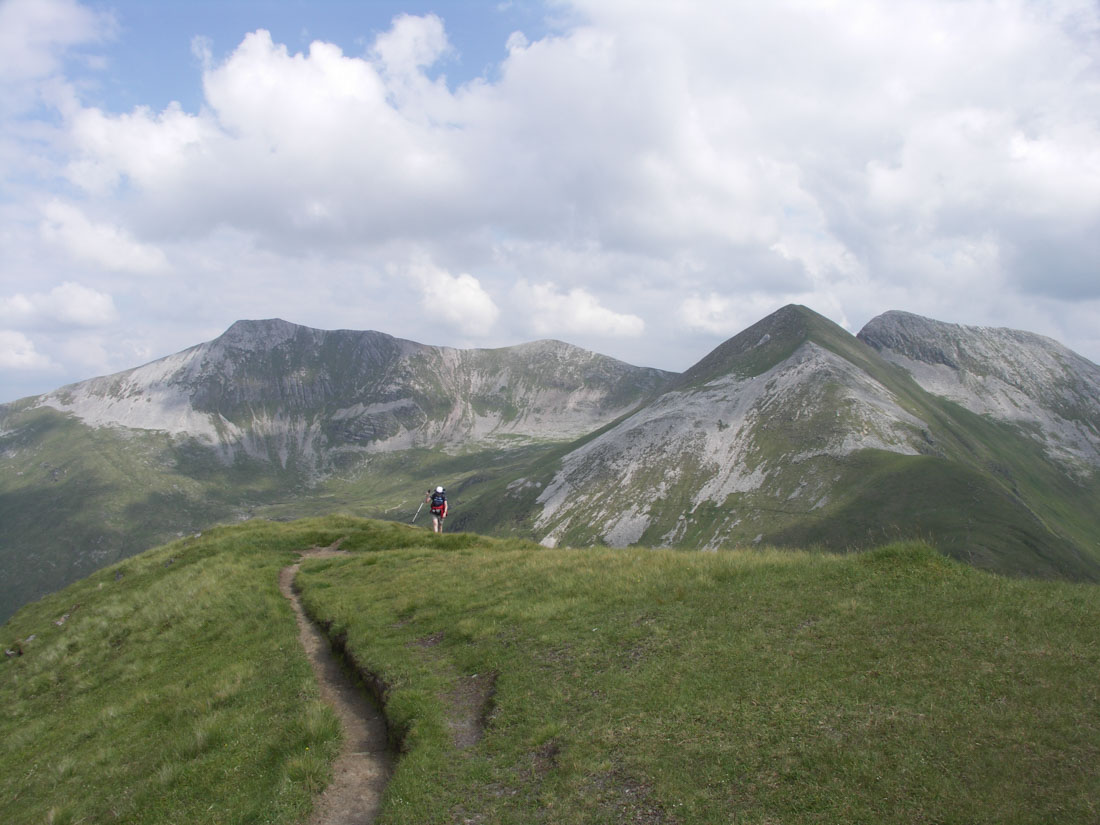 An Gharbhanach is well seen from here – dramatically intruding in front of the CMD Arete.

An Gharbhanach and Ben Nevis 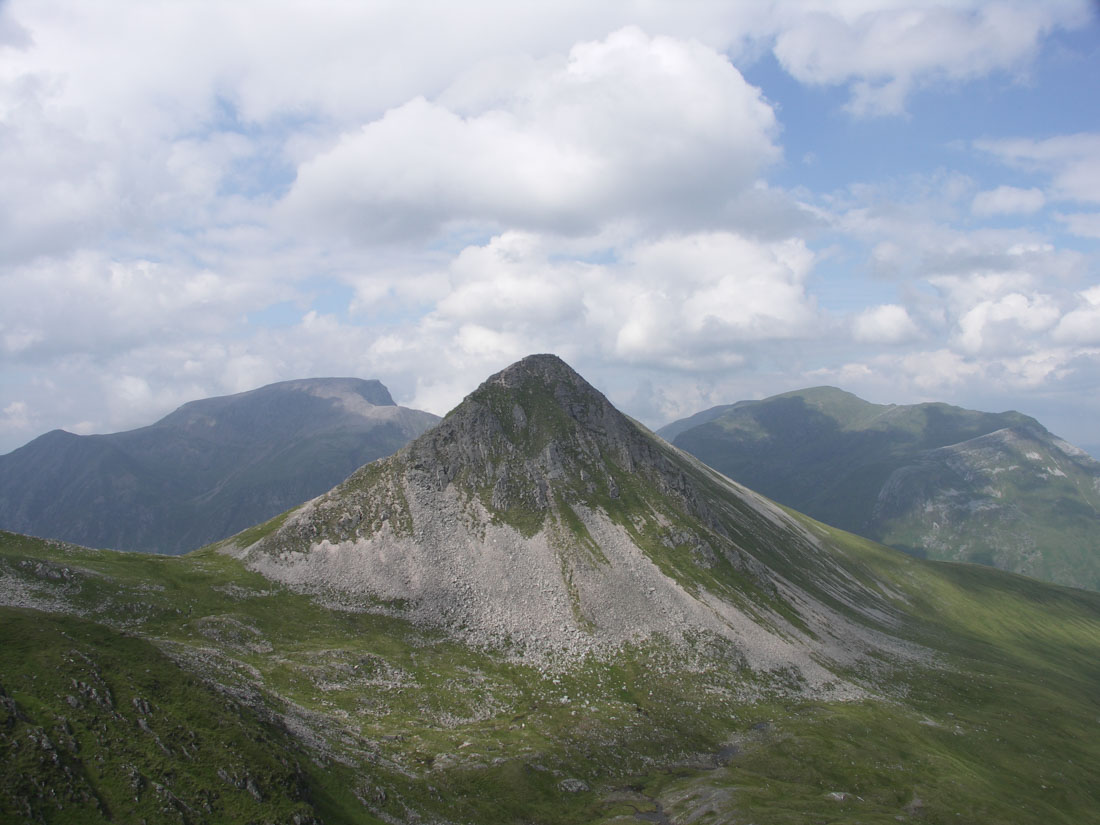 Spiky layers to the south with Bidean behind the Aonach Eagach.

Aonach Eagach and Bidean from Mamores 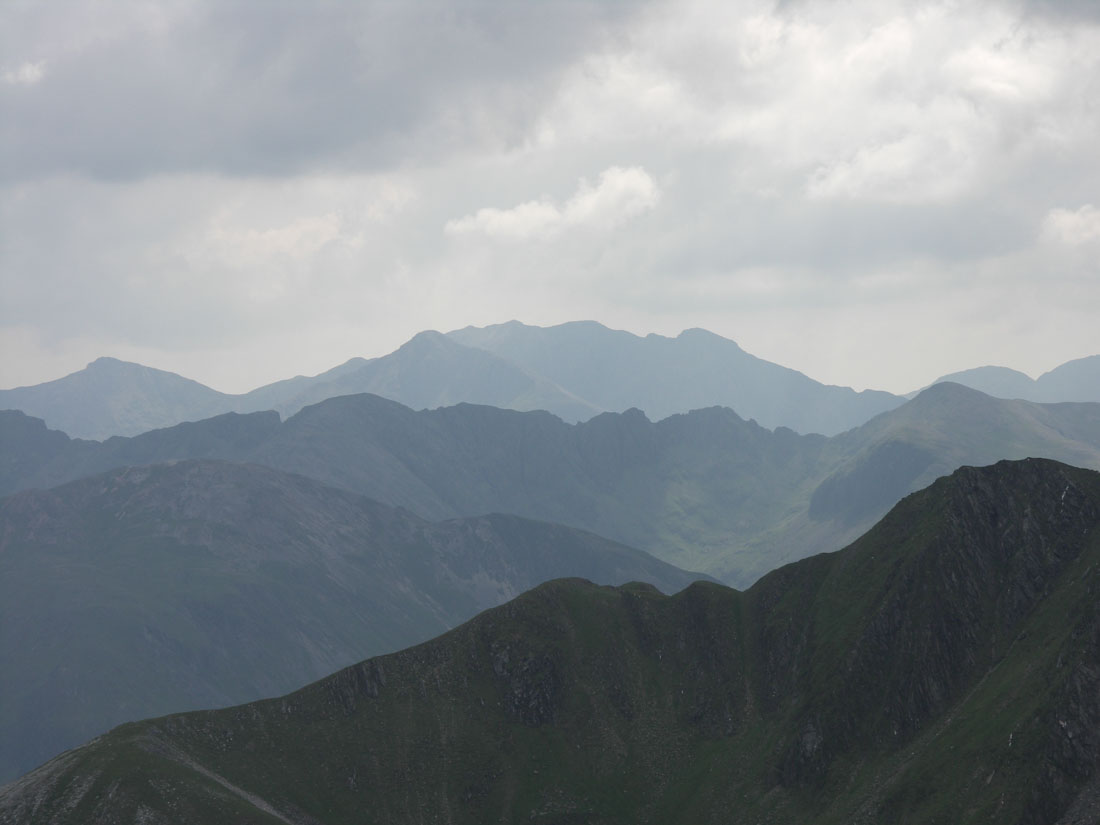 We then headed north from Stob Coire a Chairn to An Gharbhanach and then An Gearanach, some minor scrambly bits involved on the way.

An Gearanach sits opposite the Ben and the Arete.

Ben Nevis from An Gearanach summit 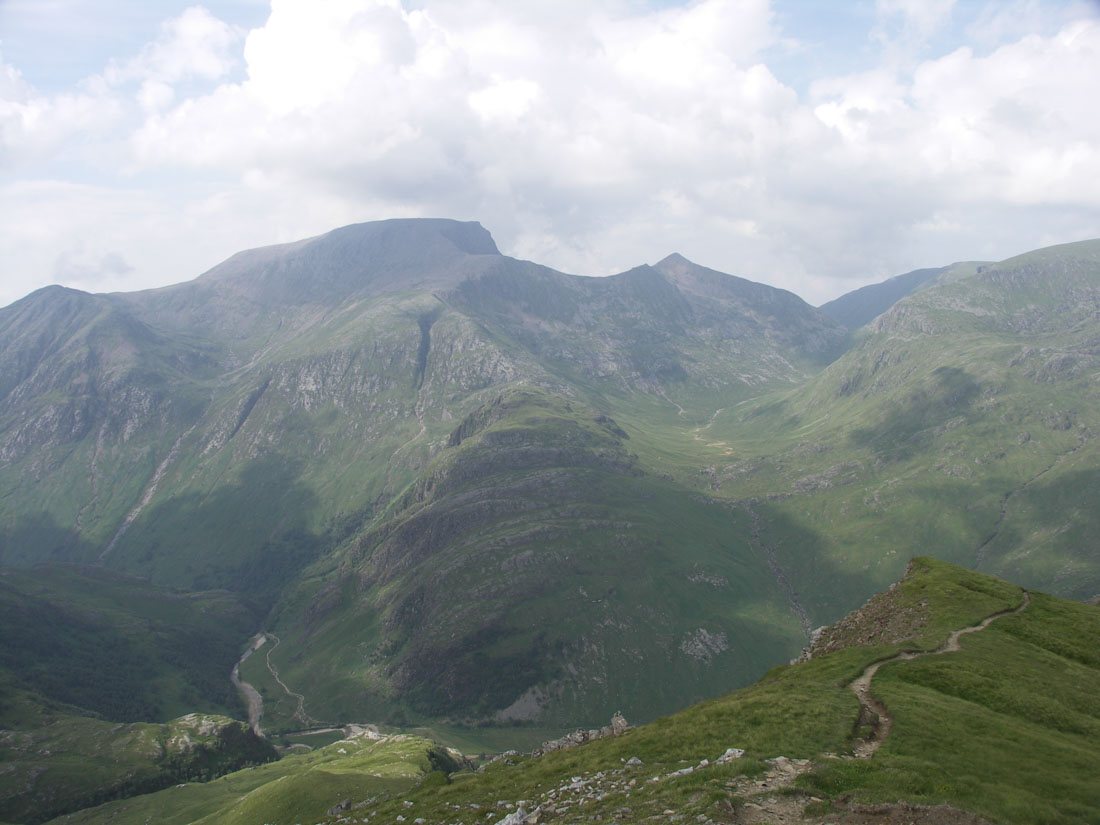 Ben Nevis from An Gearanach 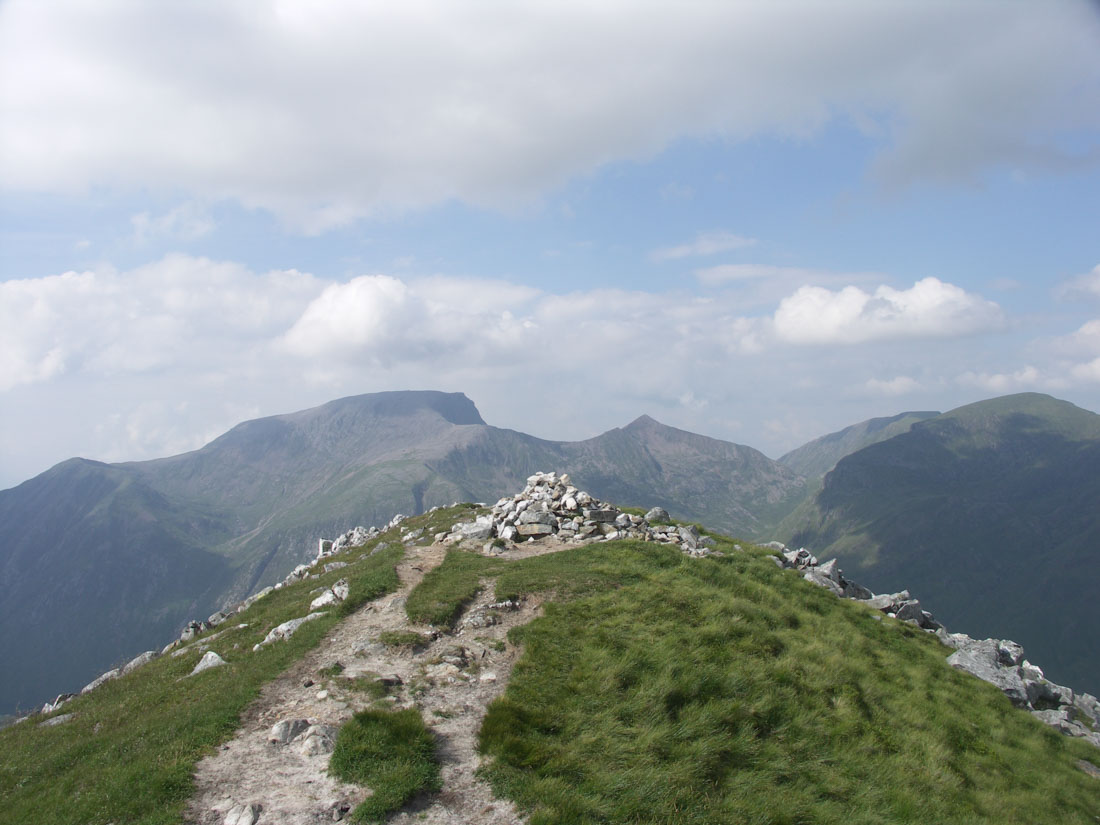 Then headed downhill, on the Ring of Steall route off An Gearanach and down to Glen Nevis. The Ben looms then towers as you drop.

Ben Nevis from An Gearanach descent 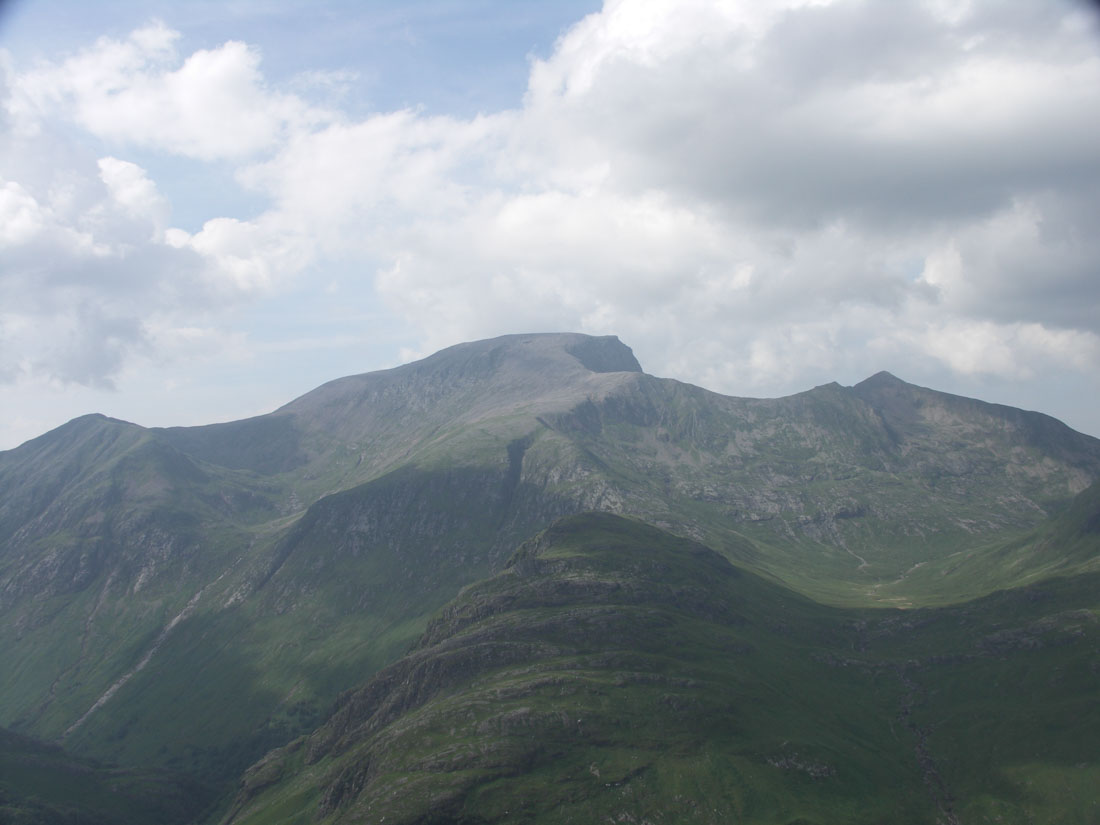 Finally back down to Glen Nevis, busy by this point and a relaxed walk out.

An Gearanach and waterfall from return 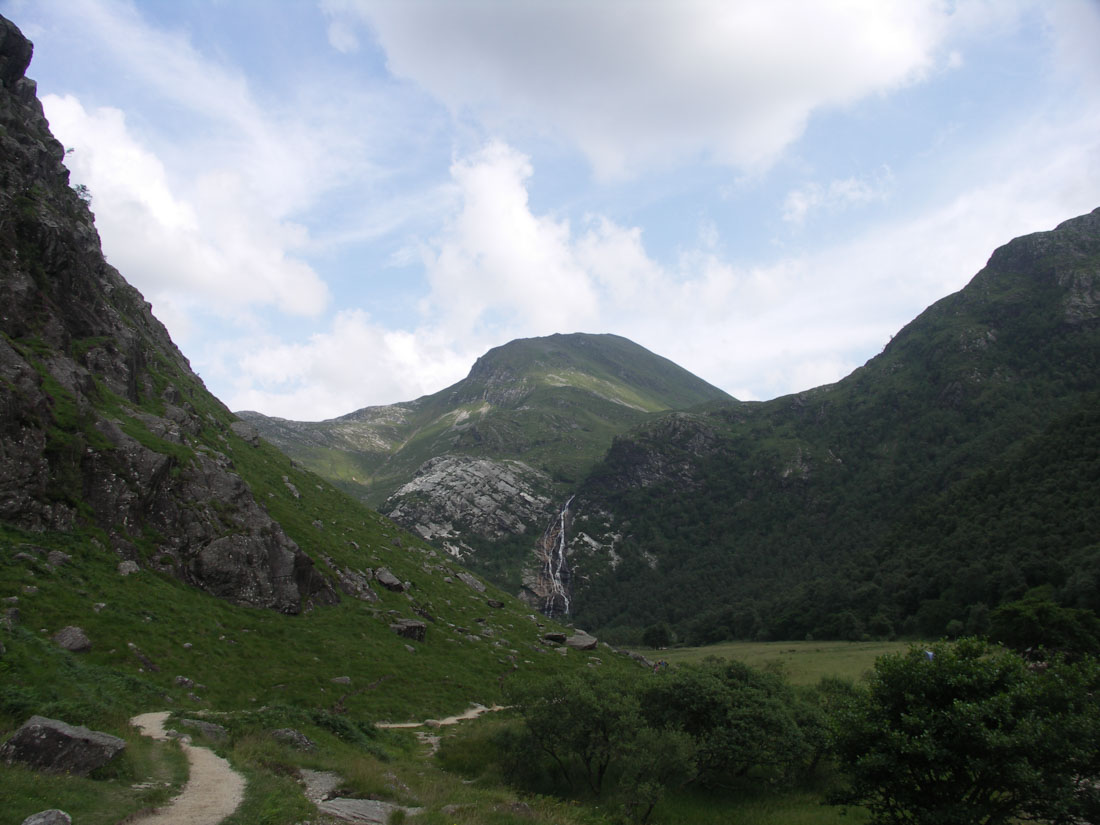 We liked this route – certainly a less used approach to Binnein Mor and a natural loop. Fancy a repeat one of these days.