The end of a week’s holiday in Speyside – we were up early and heading back down the road. With a decent forecast we decided to get out in the snow at Drumochter on the way.

Parked up before dawn and headed into Coire Dhomhain to follow the standard route for A’Marconaich and Beinn Udlamain.

The sun rose as we were making our way up A’ Mharconaich’s north-east flank. 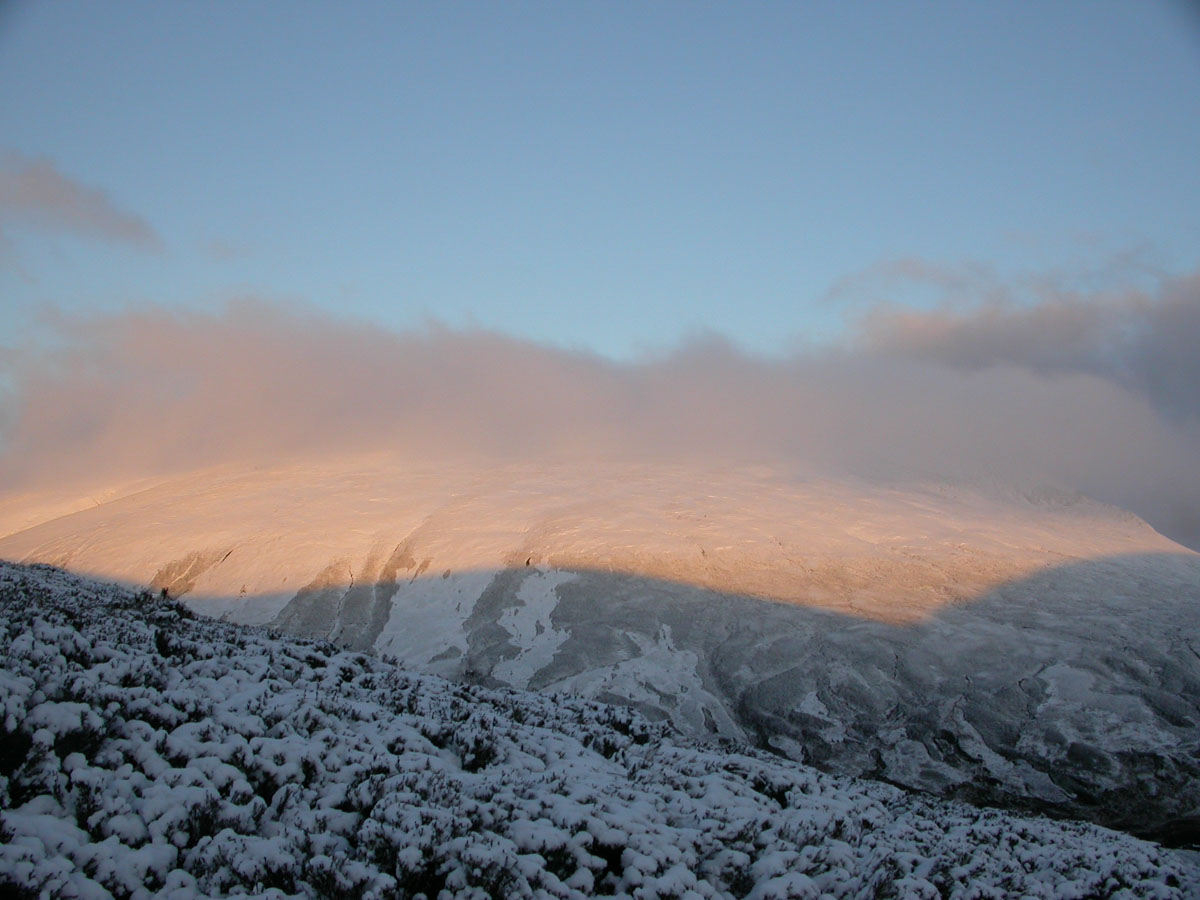 Broke into the early sunshine a little after sunrise. 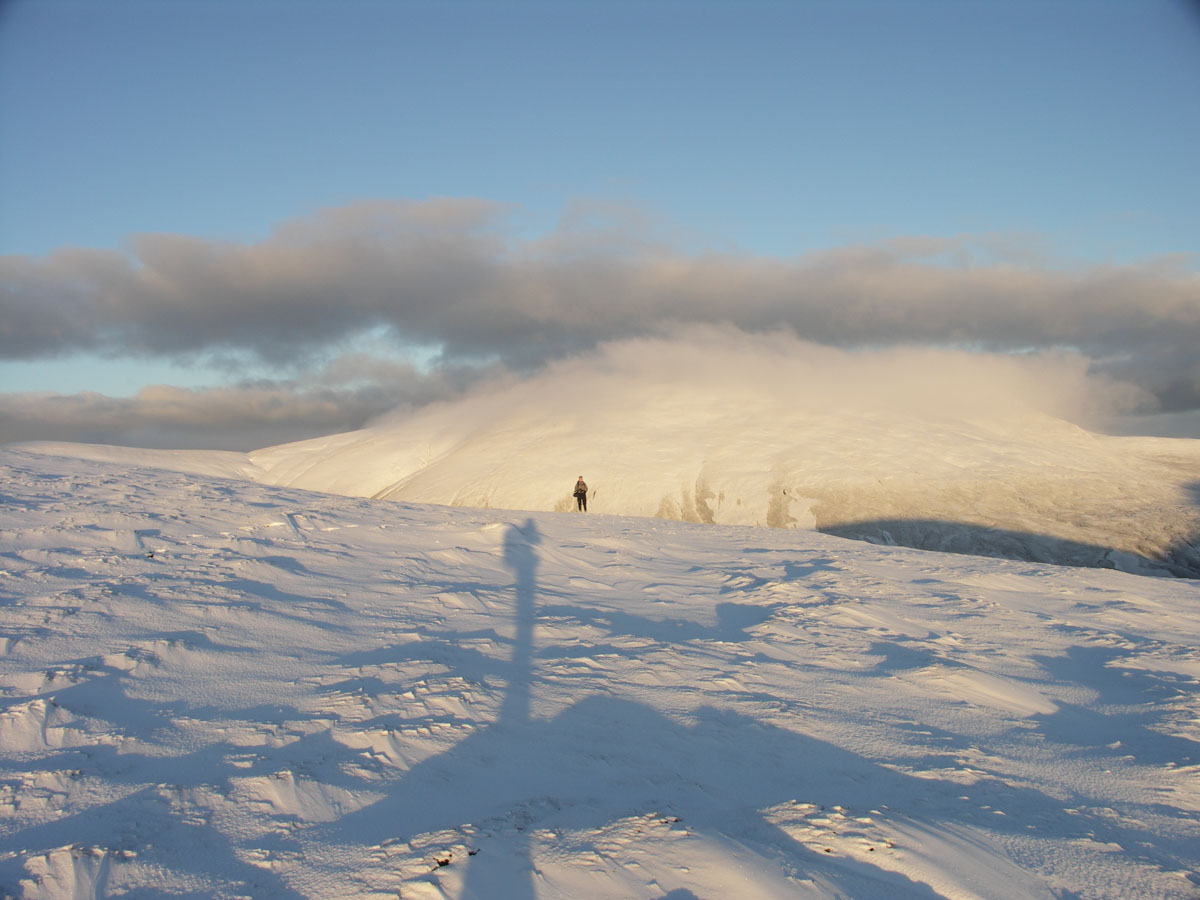 Time to take a few piccies. 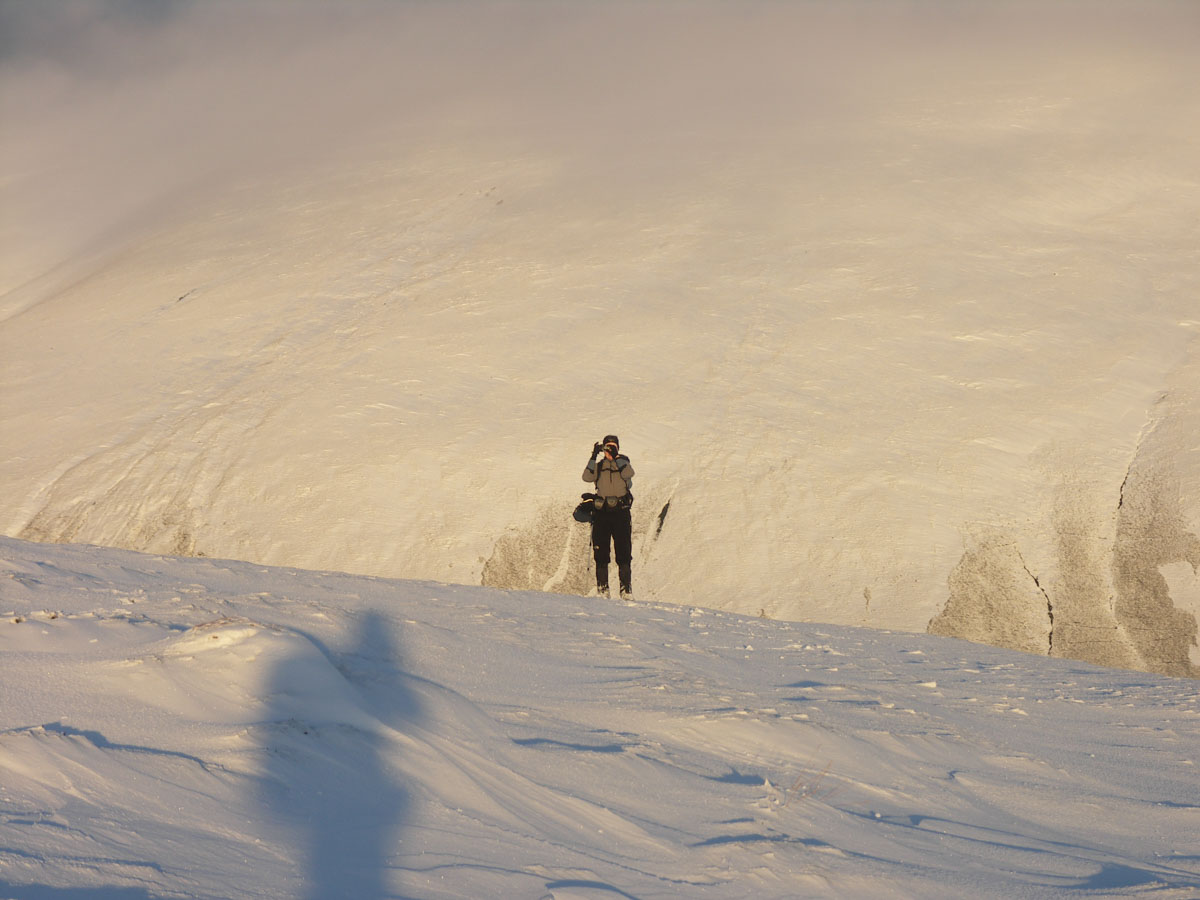 There was a brisk enough breeze to blow the snow kicked up from walking – vandalised the pristine surface! 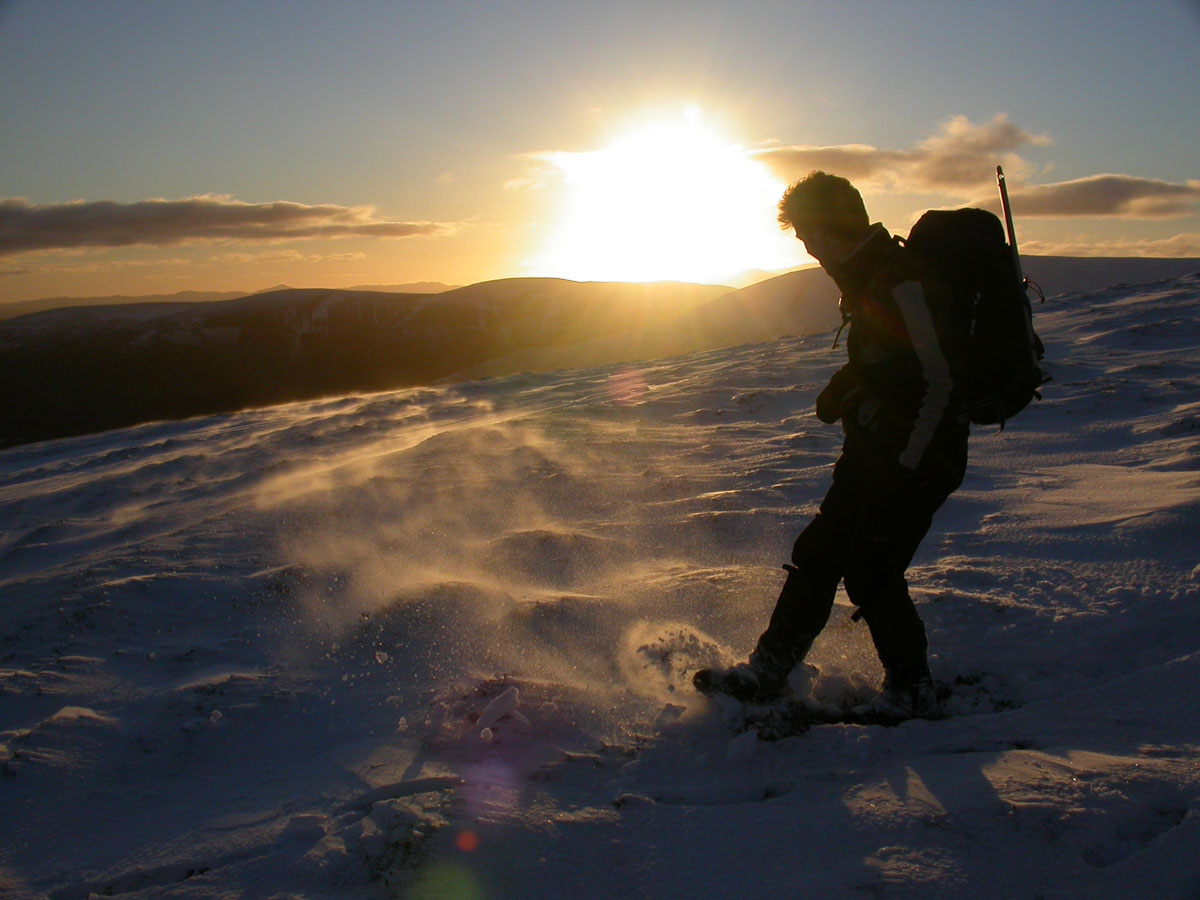 The snowpack was unconsolidated, but not so deep as to impeded progress. We carried on up the east ridge, enjoying being in sunshine. 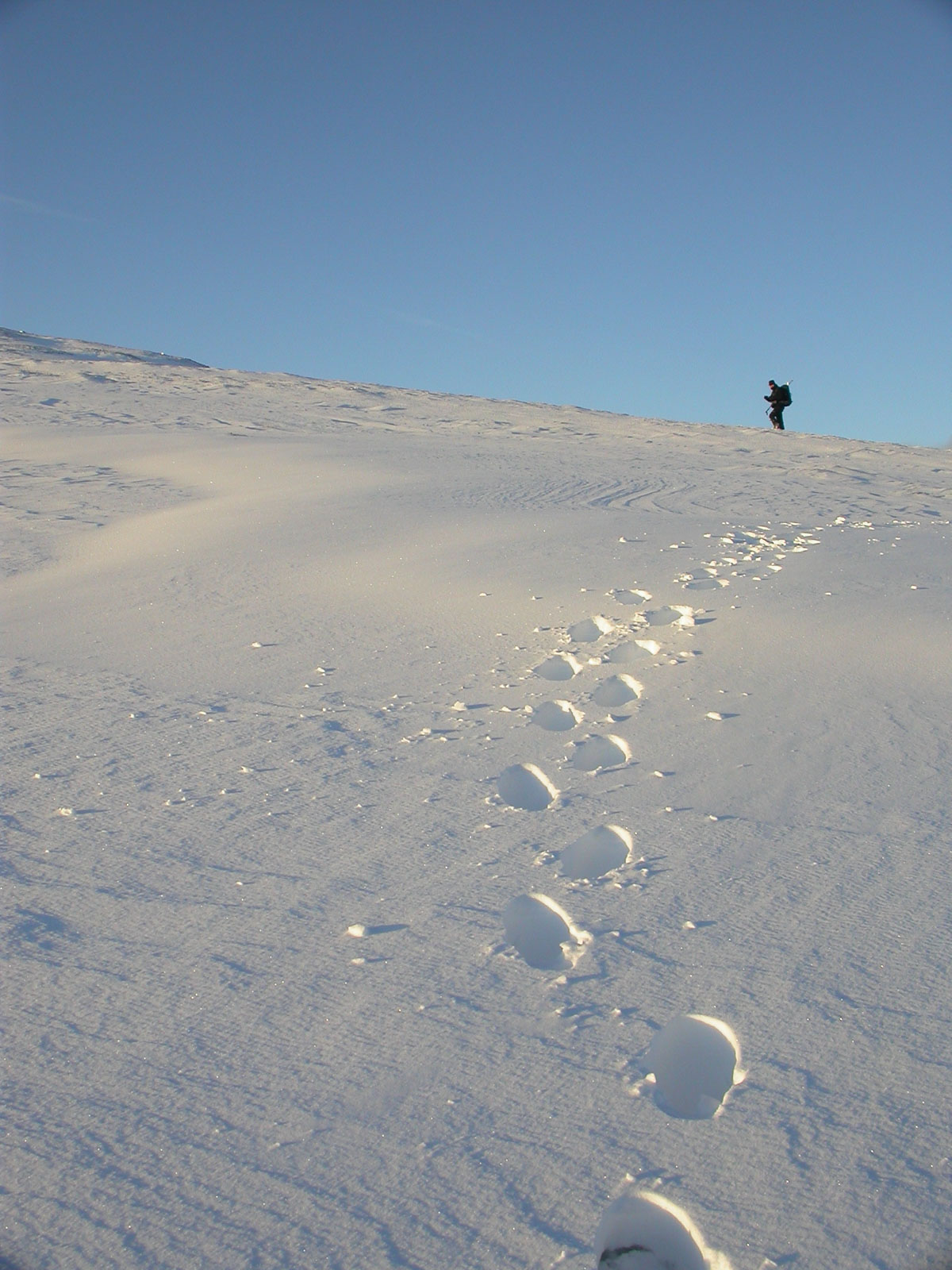 A northerly had cloud pushing down from north of Drumochter, but to our south and east skies were clear. We had a view down the A9 towards Ben Vrackie. 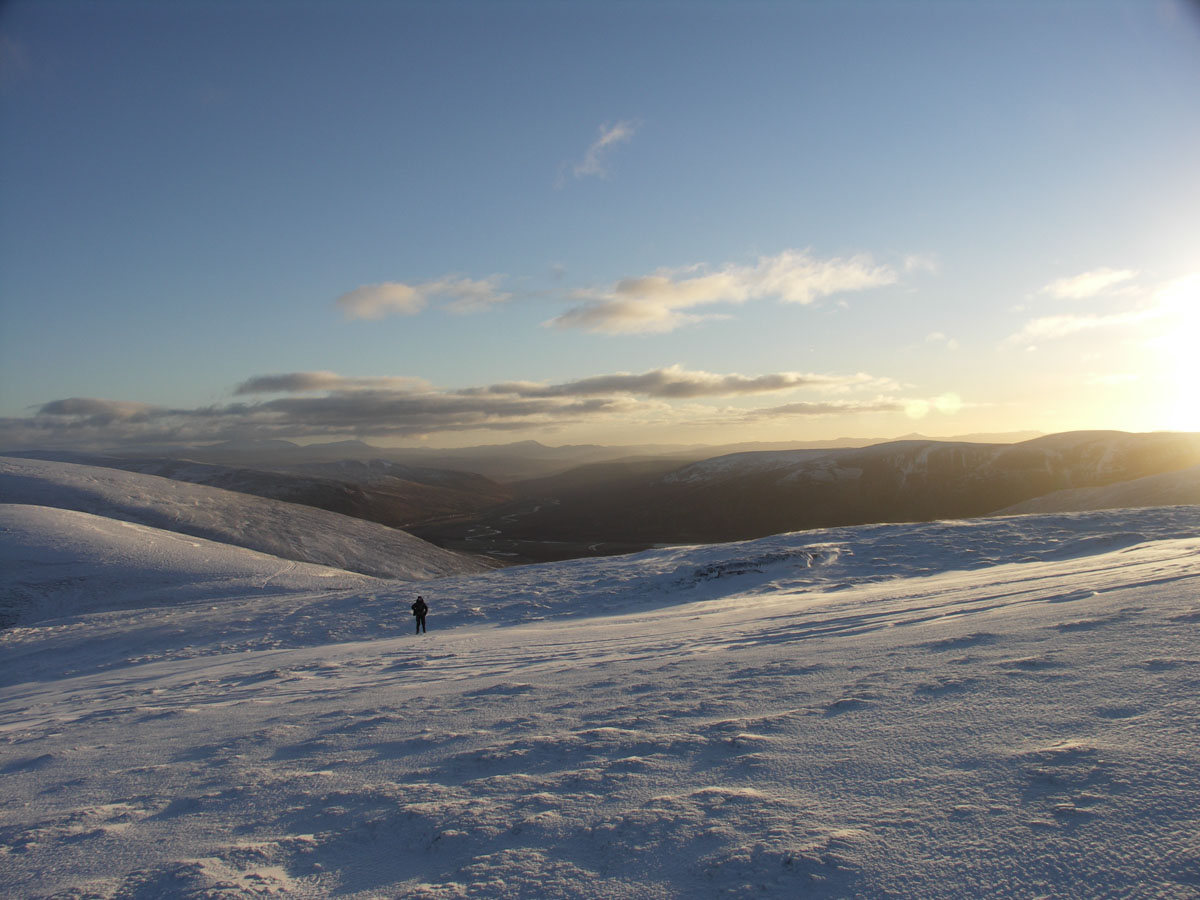 Lots of interesting patterns in the snow, sculpted by the previous week’s windy weather. 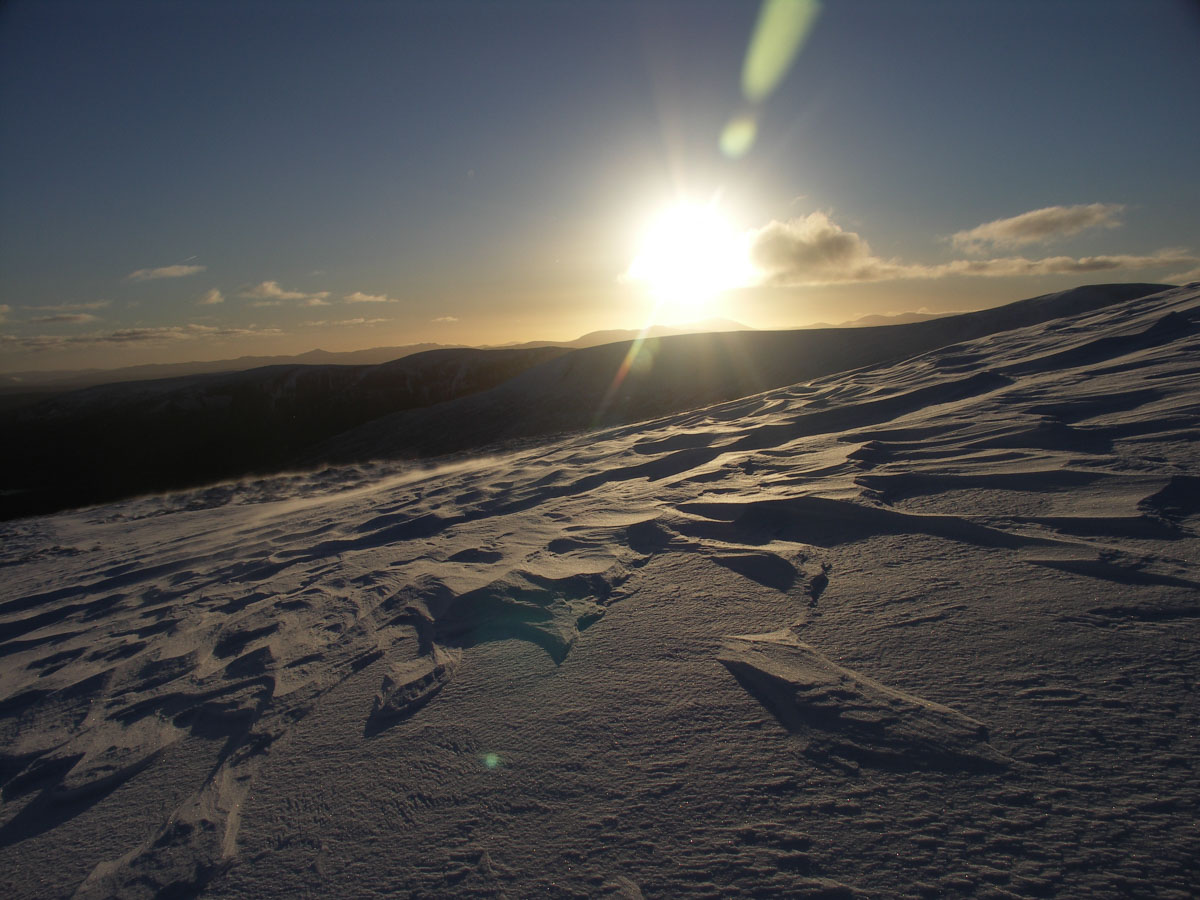 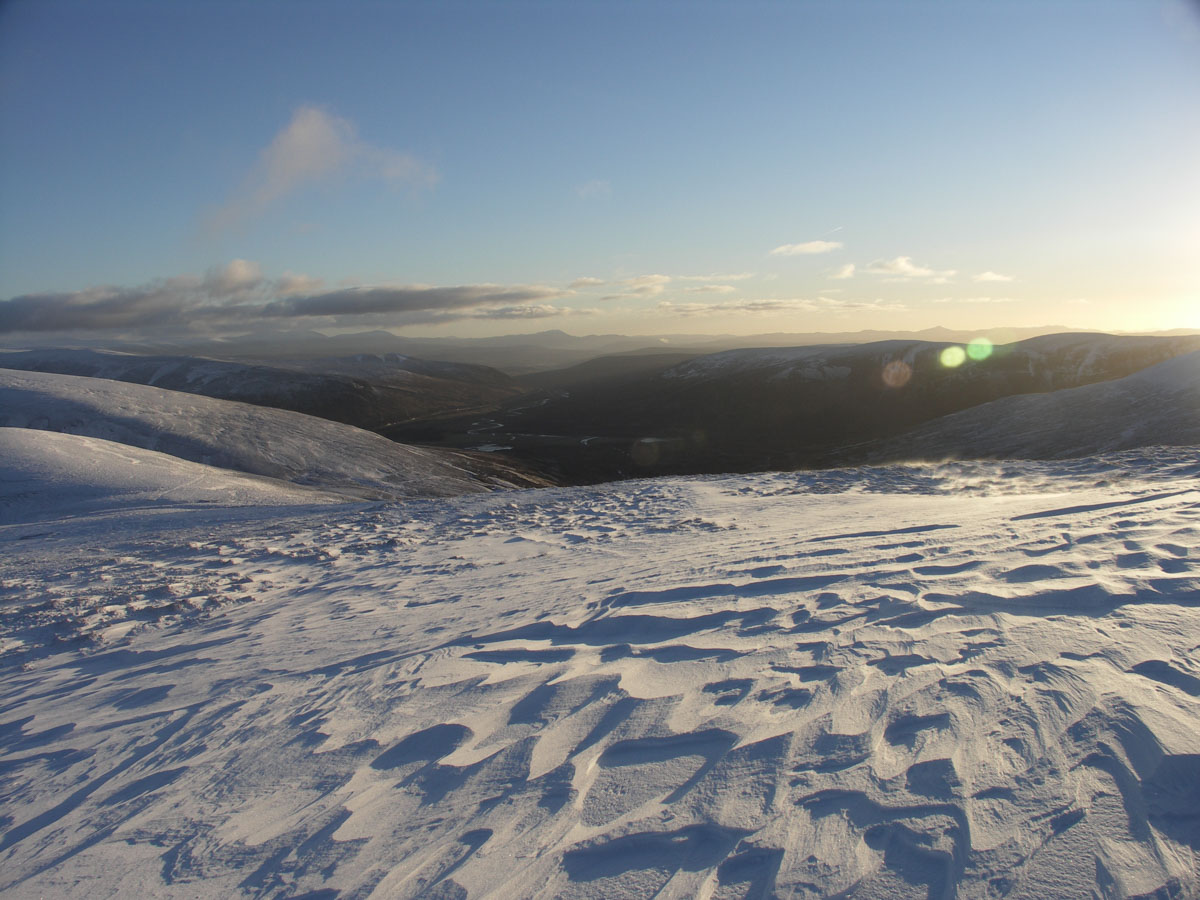 Across Drumochter the bulk of A’Bhuidheanach Beag was also sunlit. 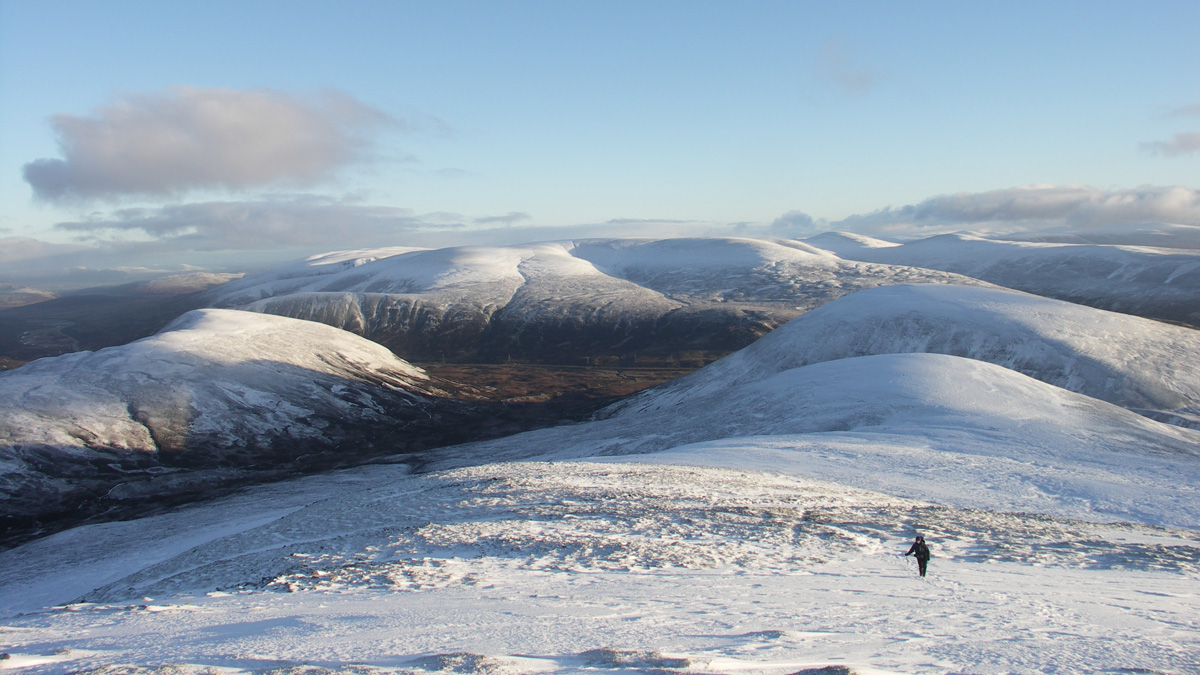 It’s a gentle enough stroll up to the munro summit. The Trig Point was rather nicely decorated with snow. Ben Alder behind looked rather attractive. 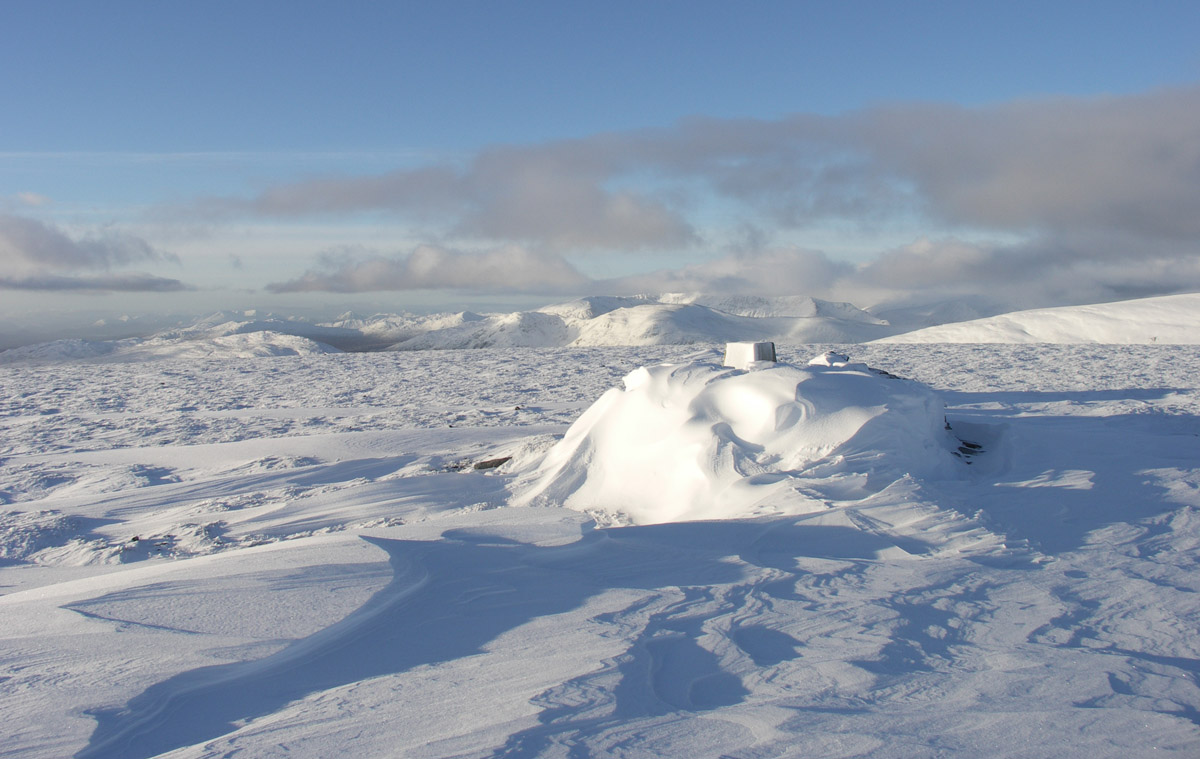 Behind us Beinn a Ghlo was a more distant backdrop as H reached the summit. 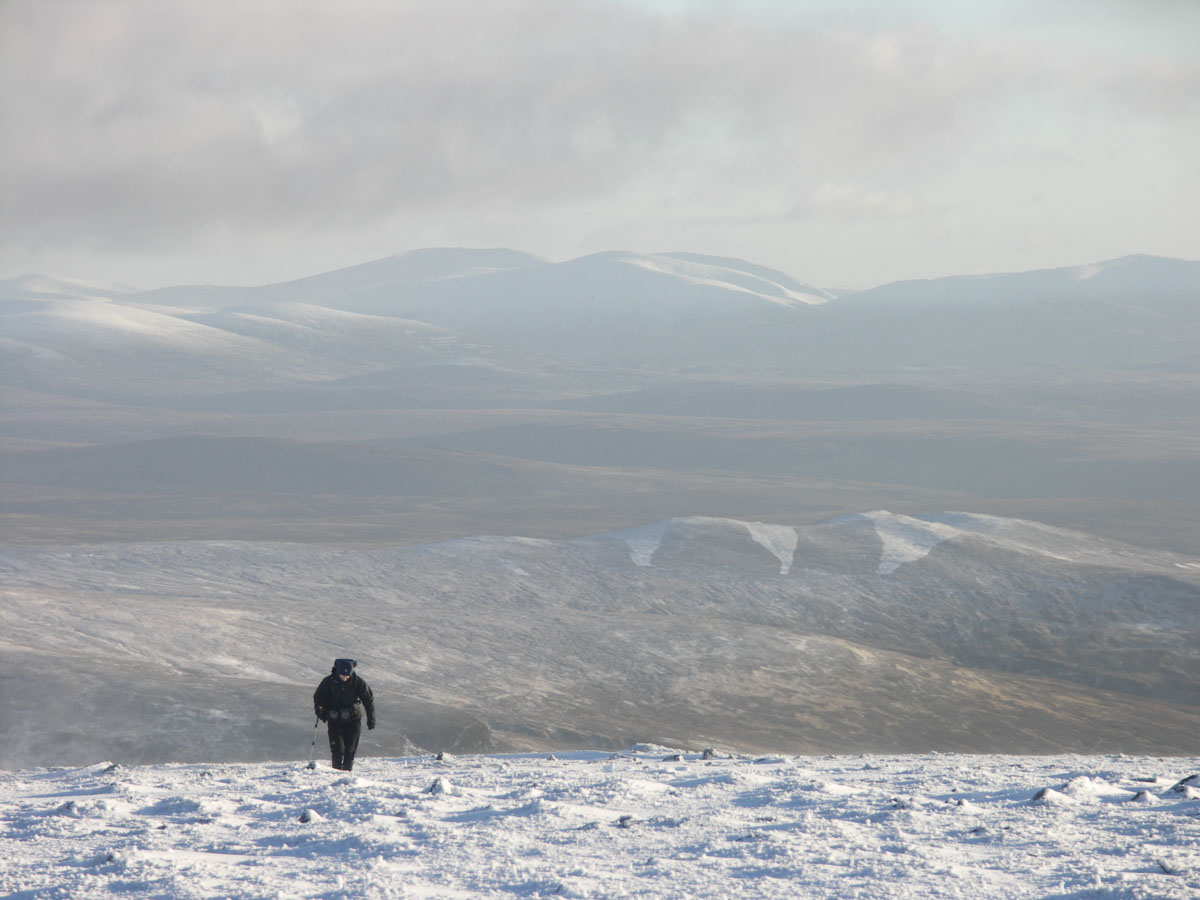 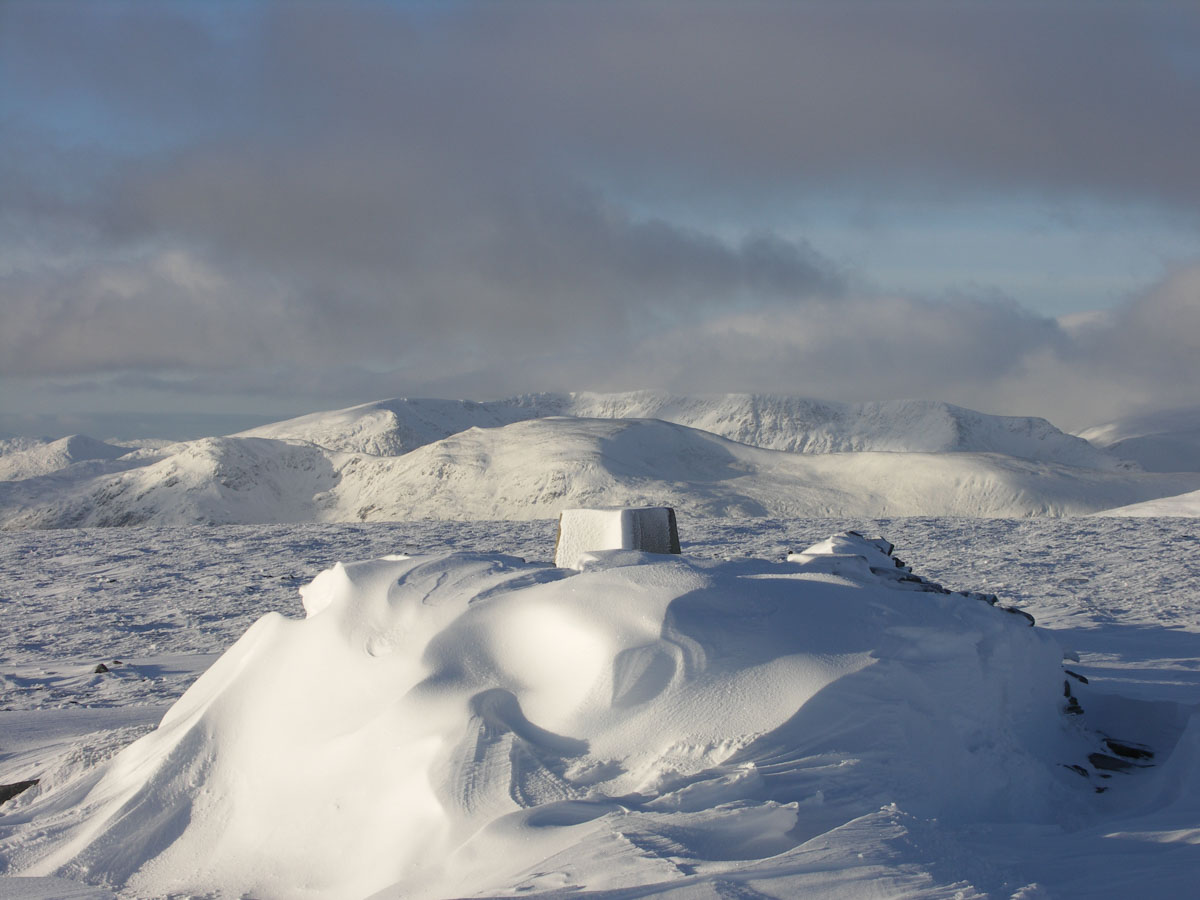 The western Drumochter munros do give decent views of Ben Alder – especially interesting to us as we’d camped on the summit just 5 months previously. 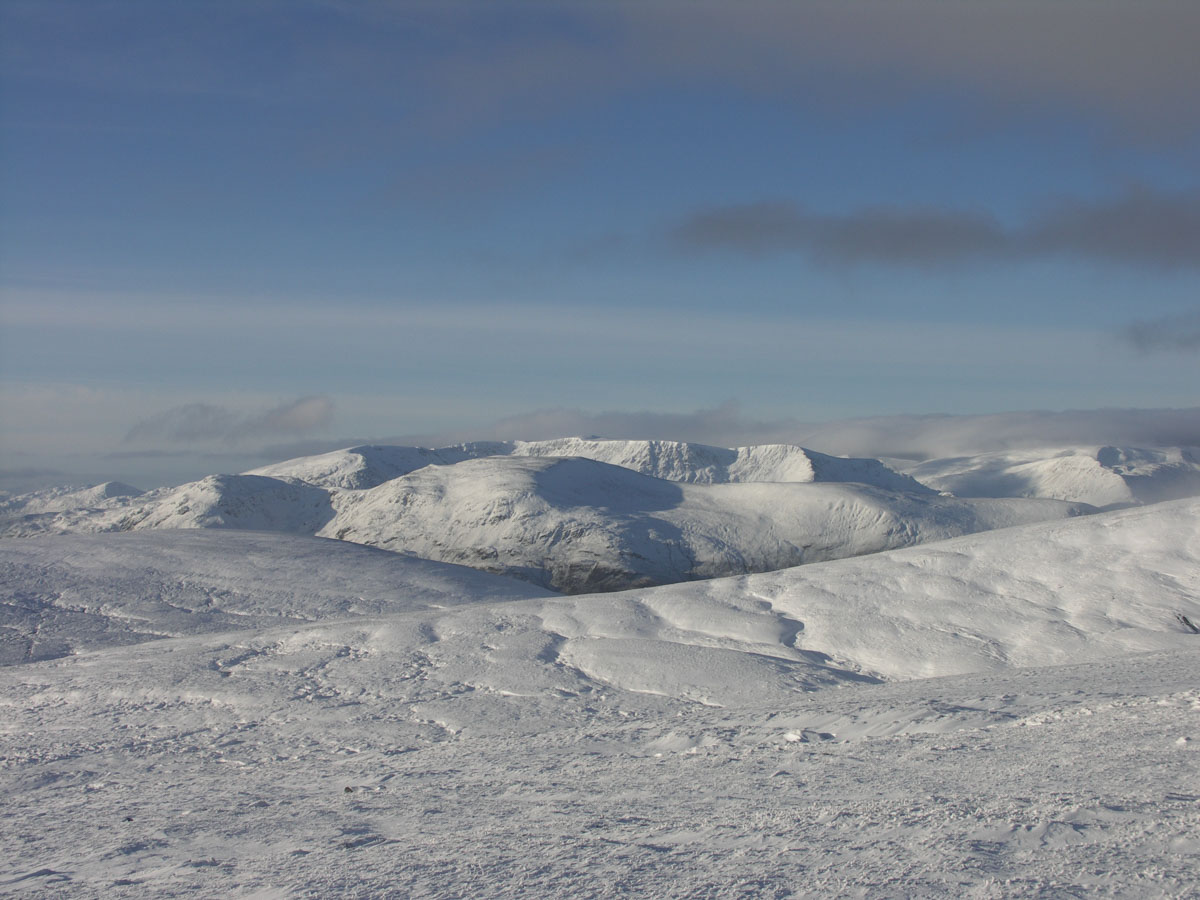 Dropped west down to Carn ‘lc Loumhaidh, the bealach between the munros. A few snowdrifts around to impede progress. Still sunny, so nothing else really matters.

Sun and snow at bealach 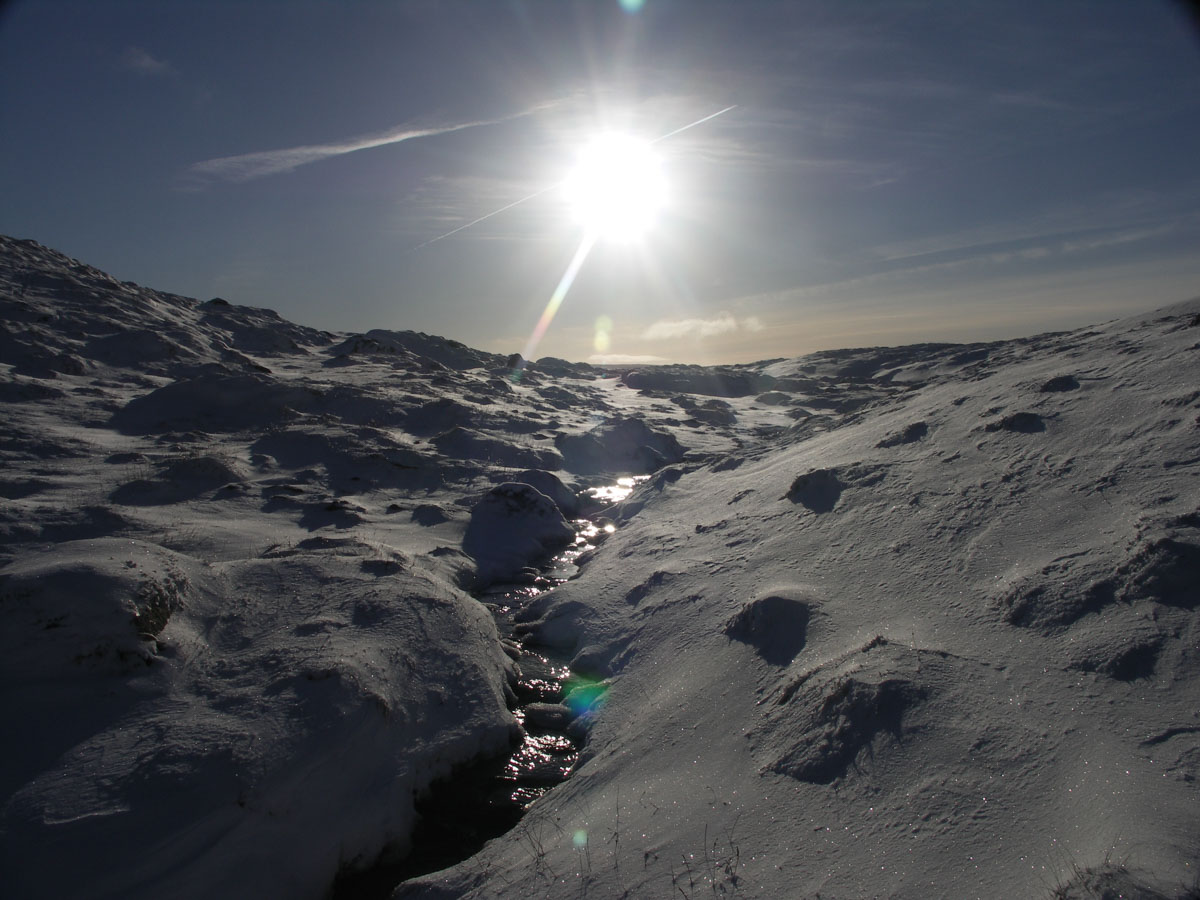 As always in winter, seeing the tracks of all the wildlife that has been around is of great interest. 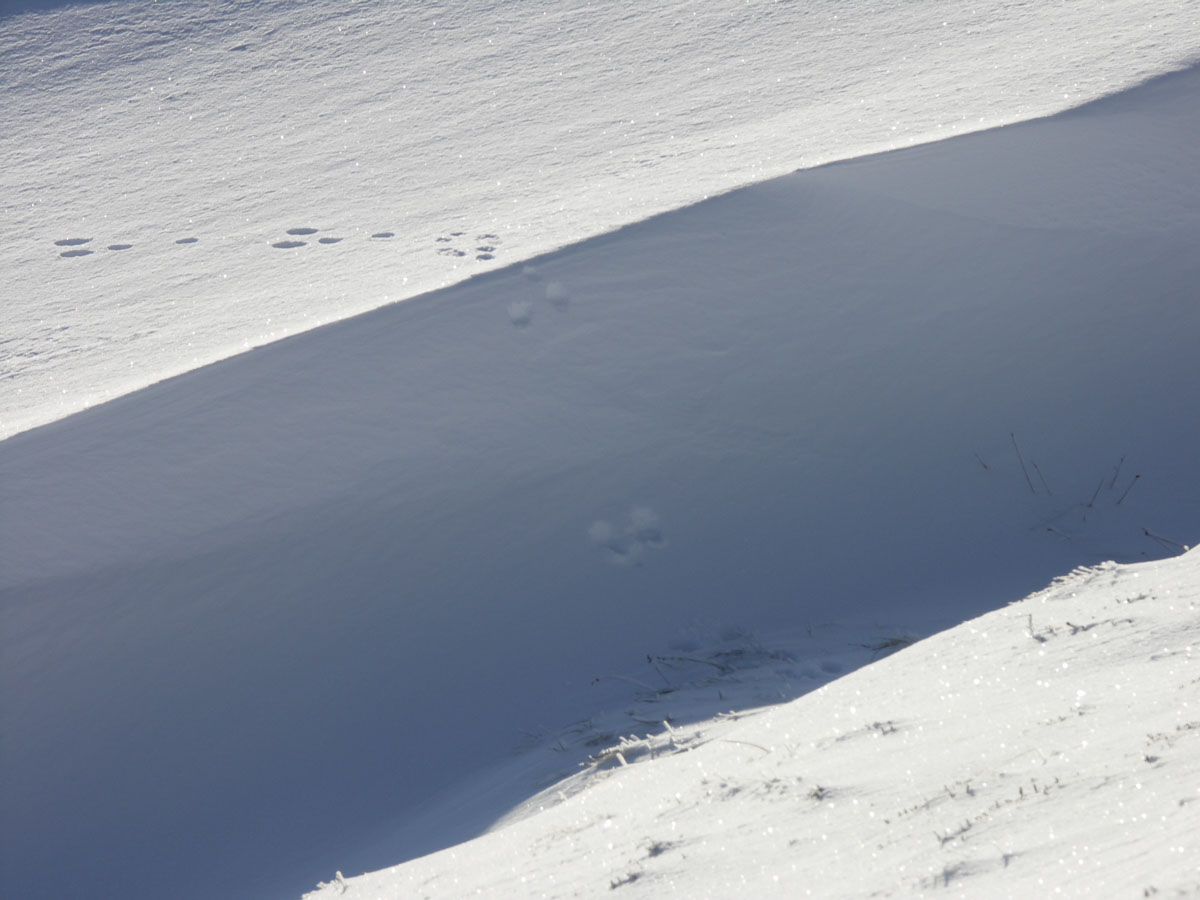 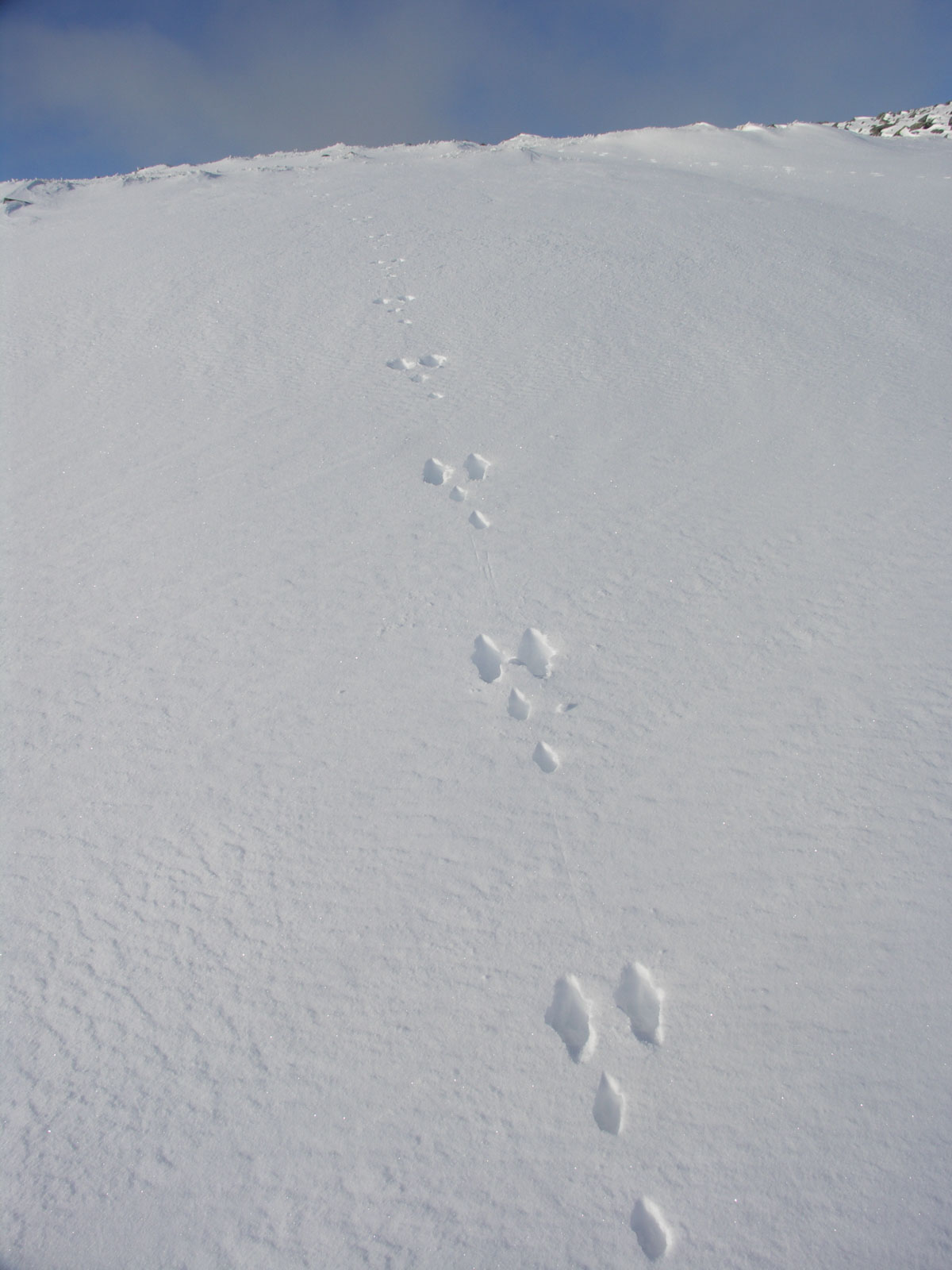 A 200m plod takes you up to the second munro – Beinn Udlamain. To the south we could see the hills of Section 2 in the distance. 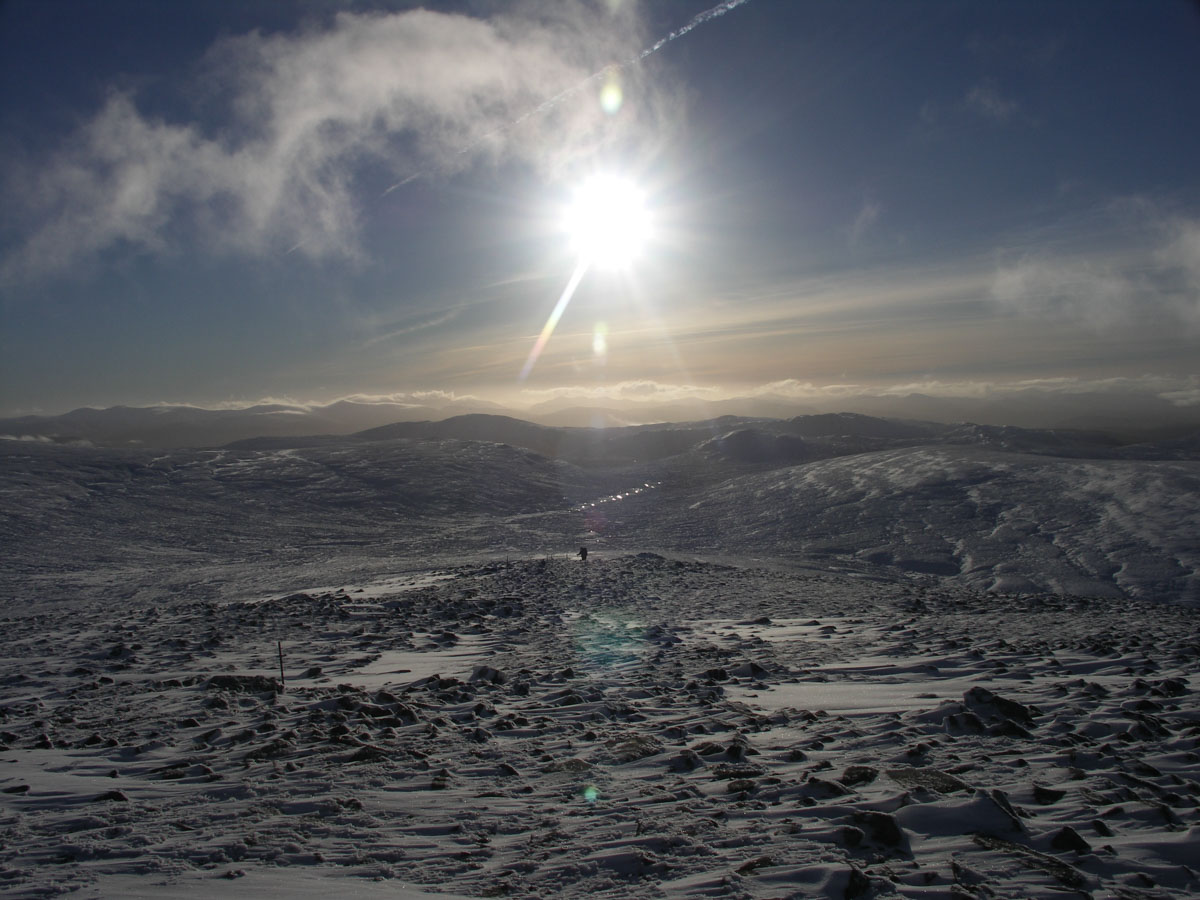 Across Loch Ericht Ben Alder is the most charismatic hill on view though. 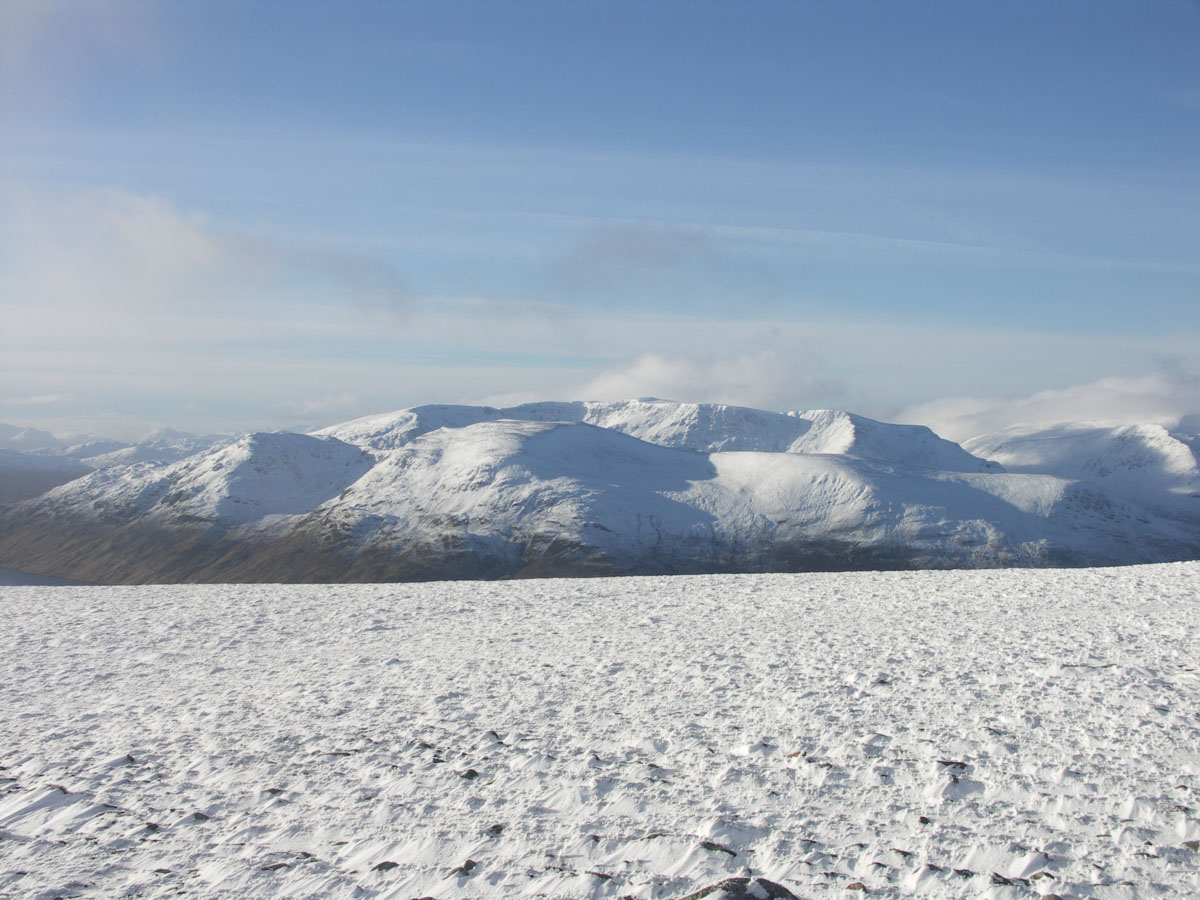 Reached the summit and had a wander around, enjoying the views. 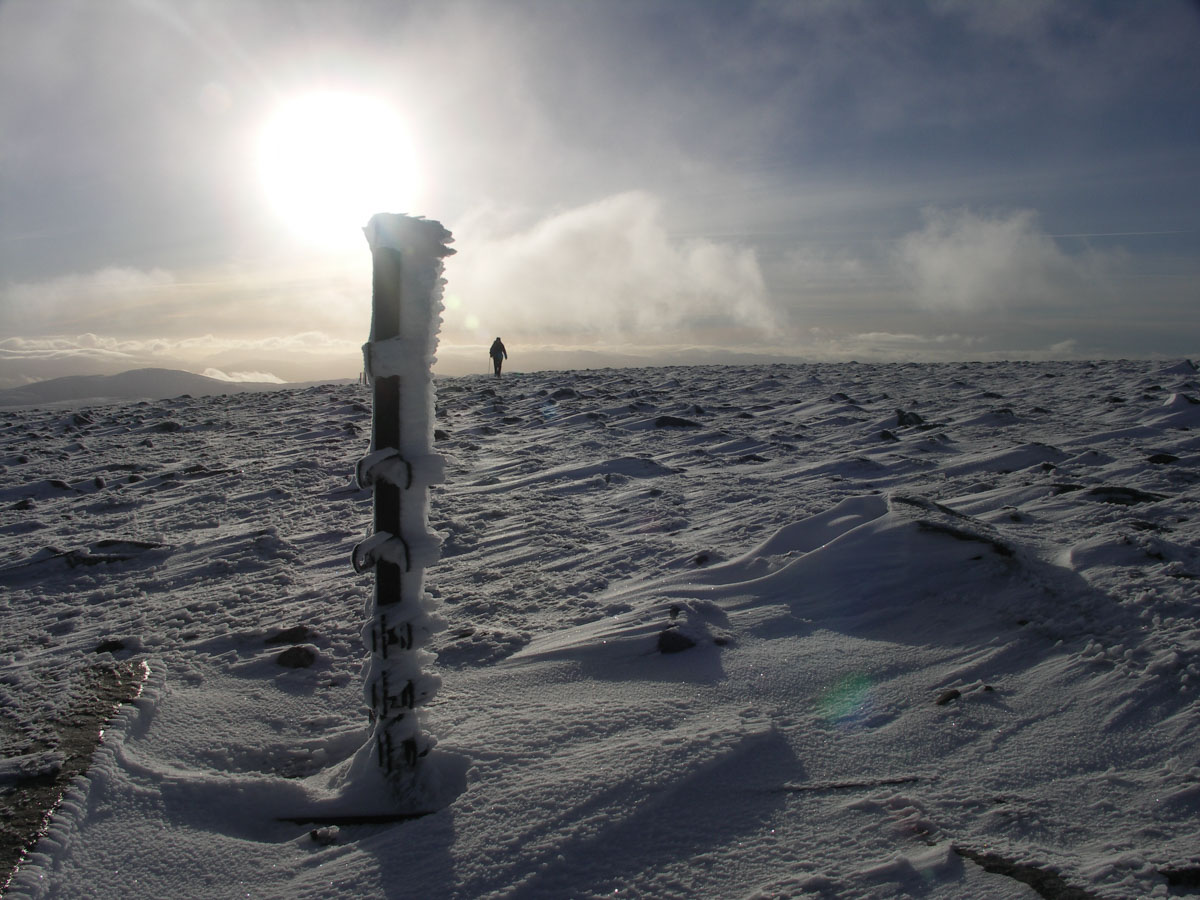 Beinn Udlamain gives some views of Loch Ericht, if you move a little down off the summit.

To the south the Corbett Stob an Aonaich Mhoir guards the east shore of Loch Ericht. A nice wee hill, if rather tucked away. 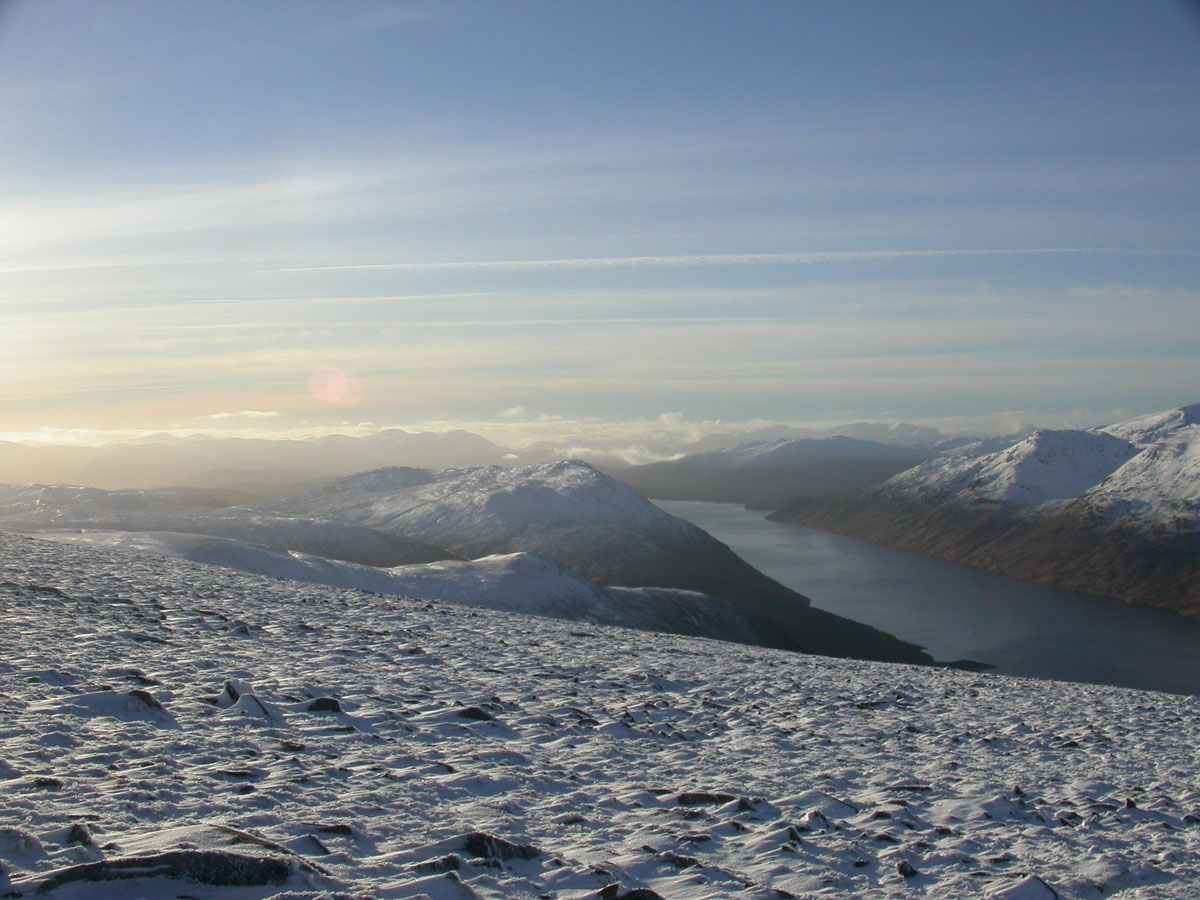 To the north Loch Pattack sits at the SW end of The Fara. 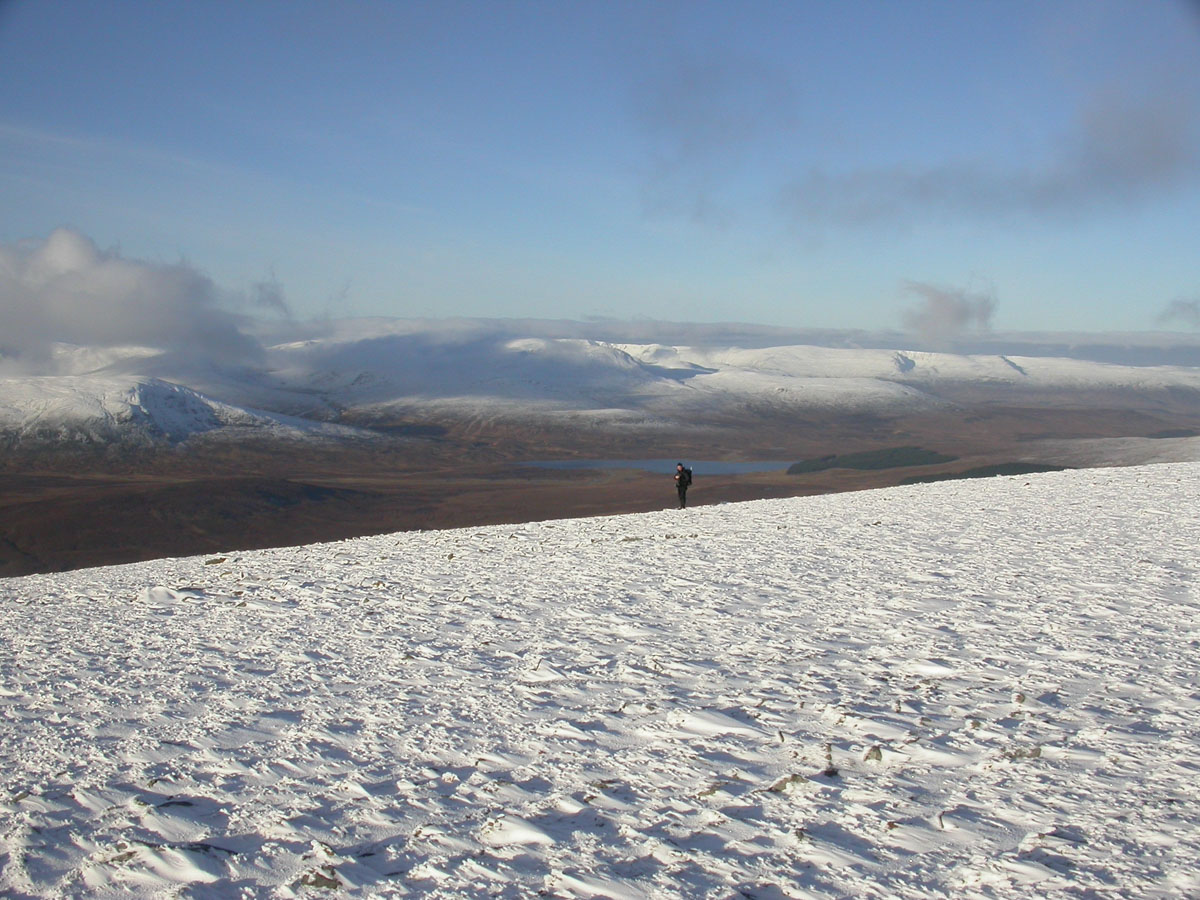 We spent a long time looking across at Ben Alder though – such an iconic hill. 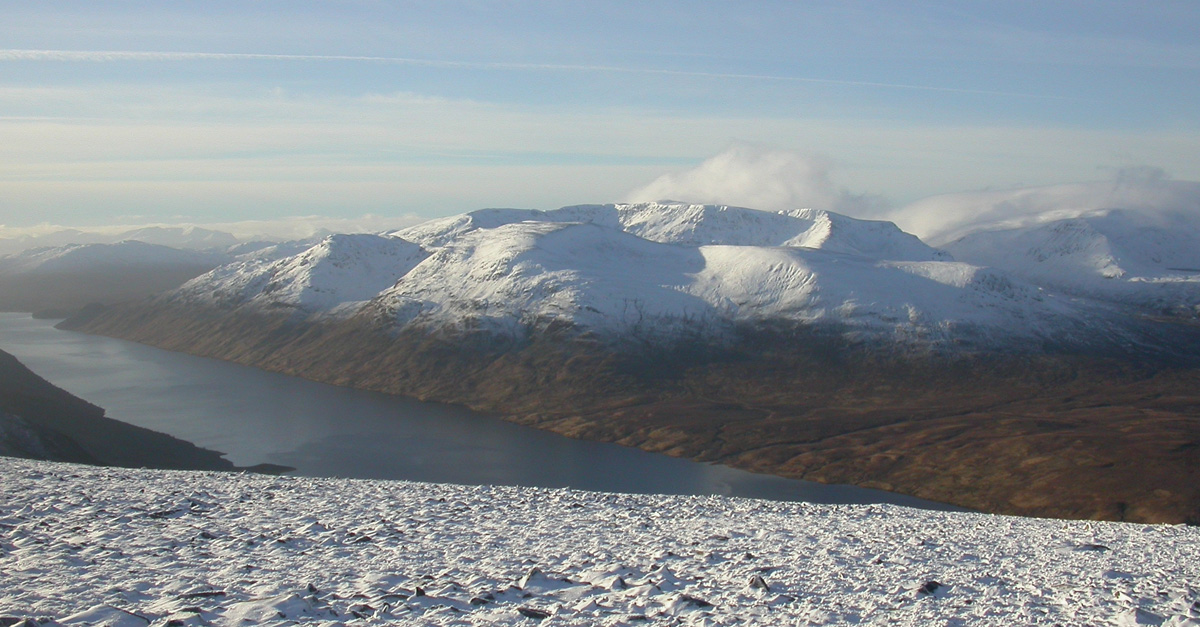 Then we retraced our steps to the bealach at the head of Coire Dhomhain, before dropping into the coire itself to return to the car. 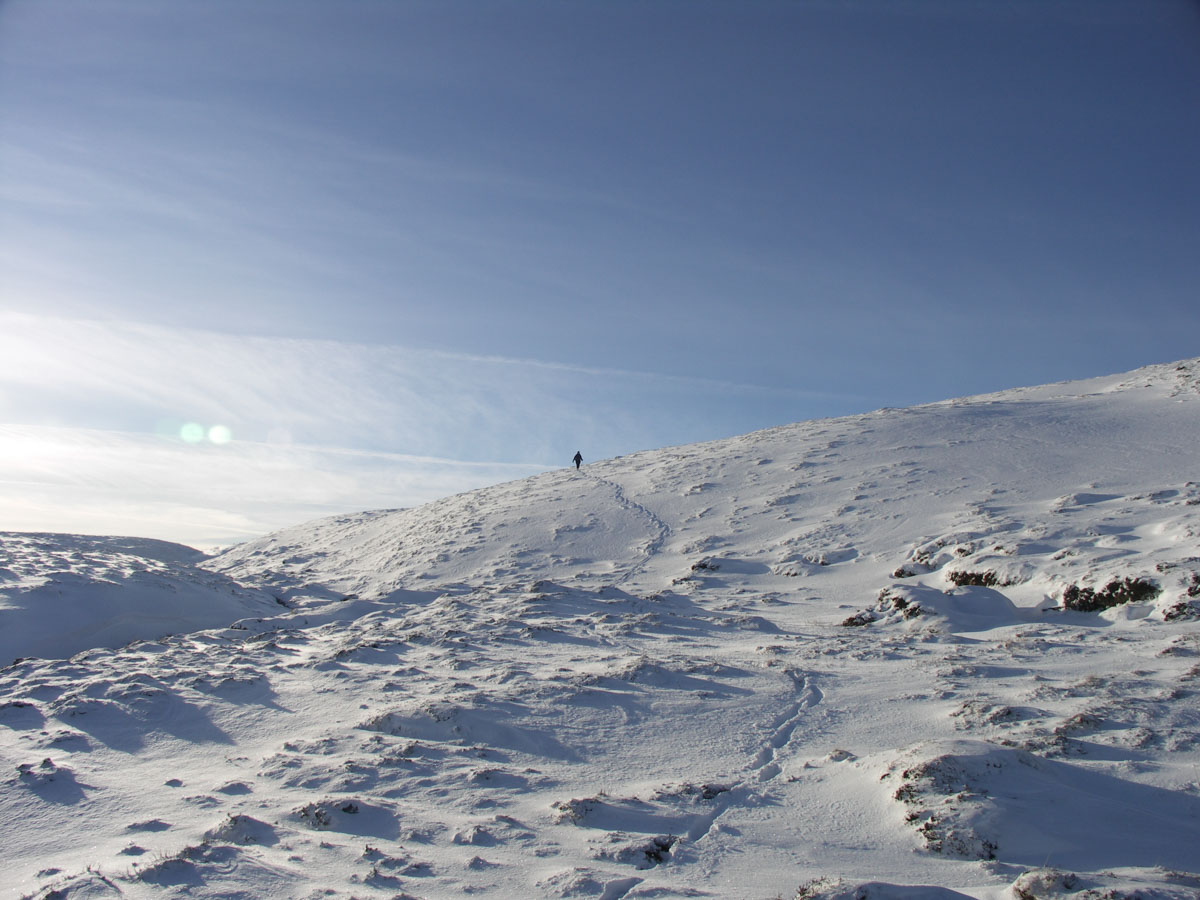 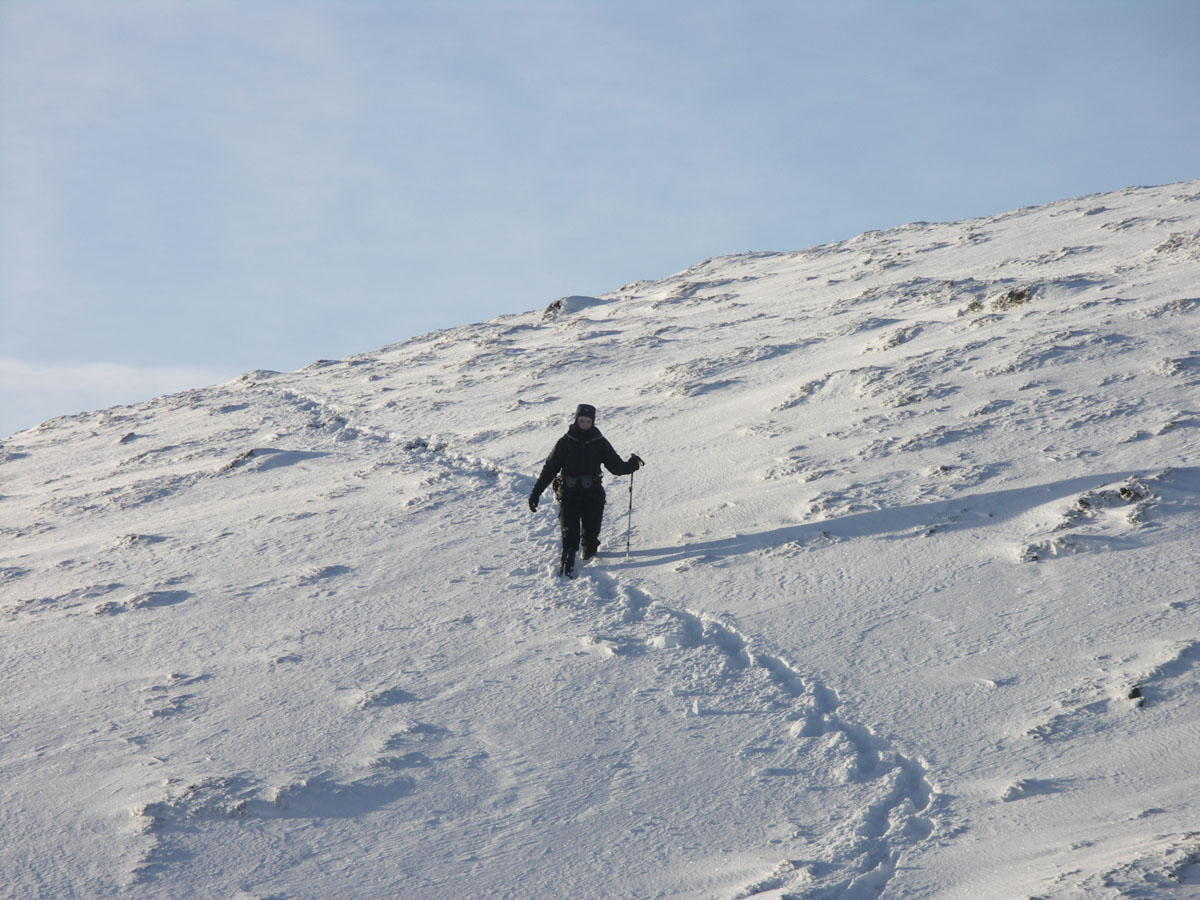 The head of the coire was a bit of a plowter on snowy heather. 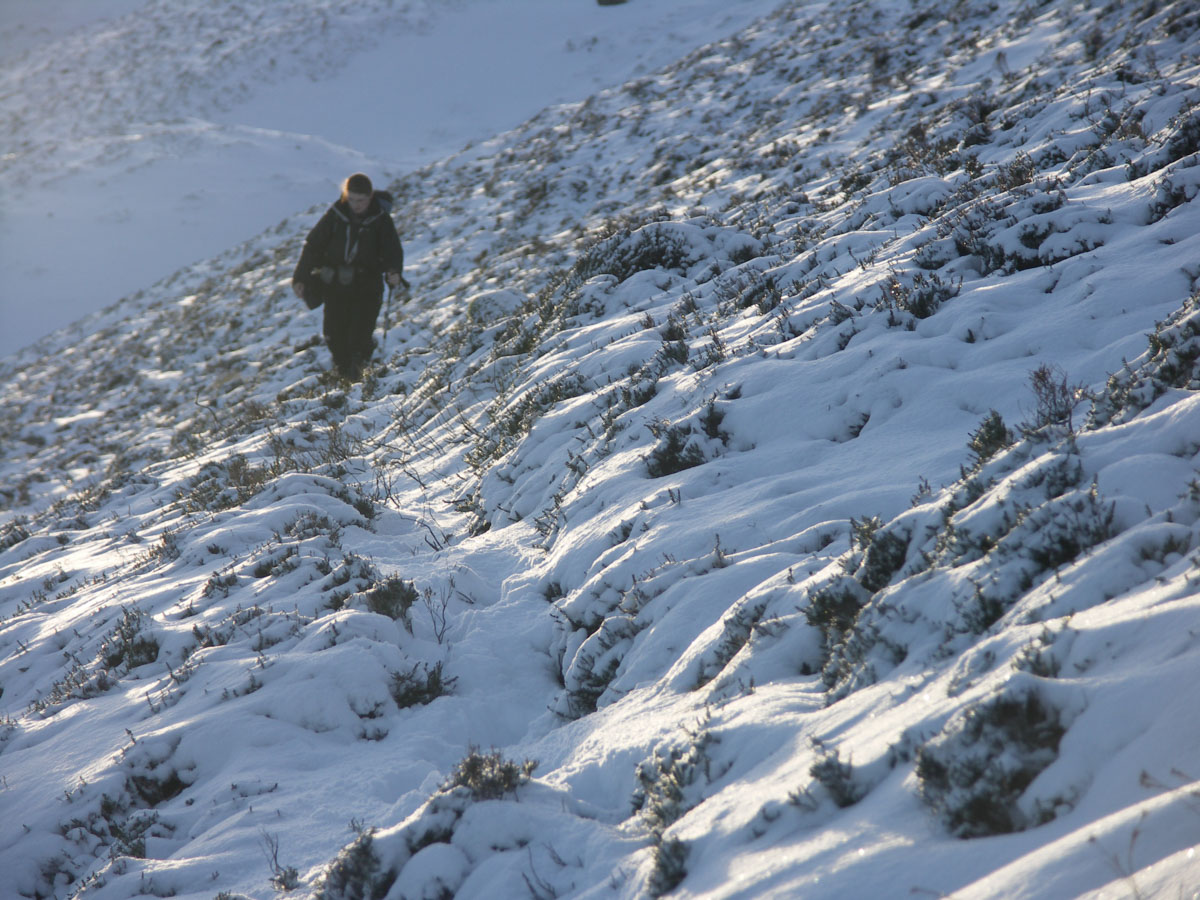 As we reached the track at the floor of the coire we were in the shade and we were heading for dusk. 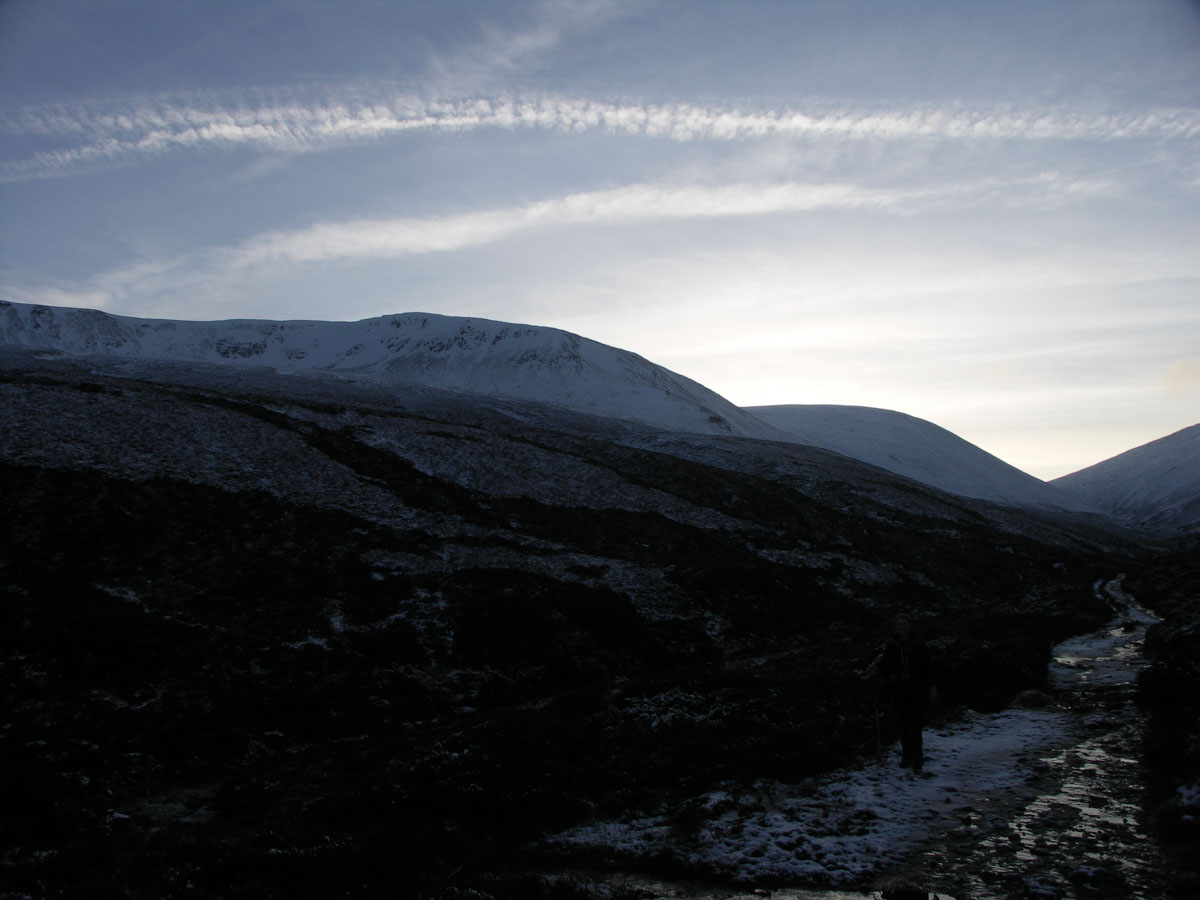 A decent day – nothing technical, but good hills for a winter wander.