The end of a holiday near Braemar – March is a good time for these, winter usually persists in the Cairngorms, and day lengths are long enough for the long approaches into the southern aspect of the Cairngorms.

We’d visited Beinn a Bhuird back in December 2005, camping in Glen Quoich. The hill had been clagged so it was on our repeat list.

A decent day on offer for the Friday so we got up and out for pre-dawn start.

Drove round to Linn of Quoich and got started. Alpenglow reached the top of Beinn a Bhuird not long after we started up the track. 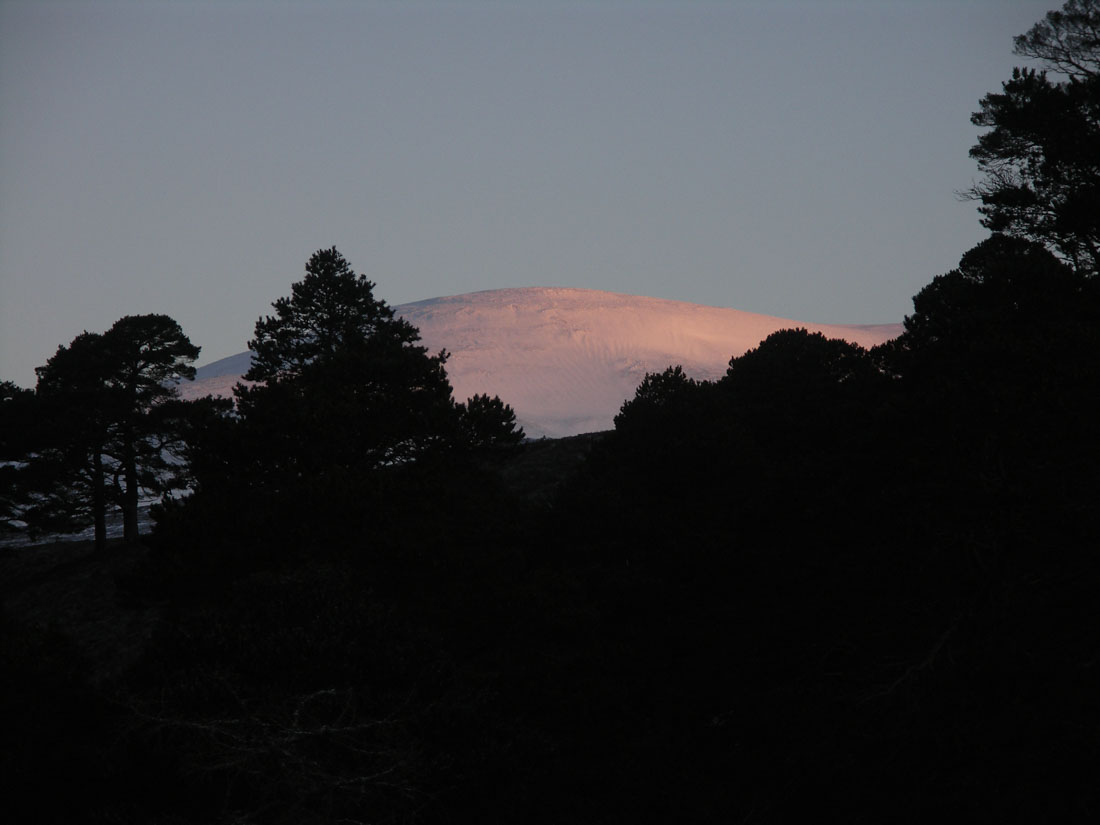 The walk up Glen Quoich is pleasant at any time of year, what winter lacks in active wildlife is made up for by wintry scenery. 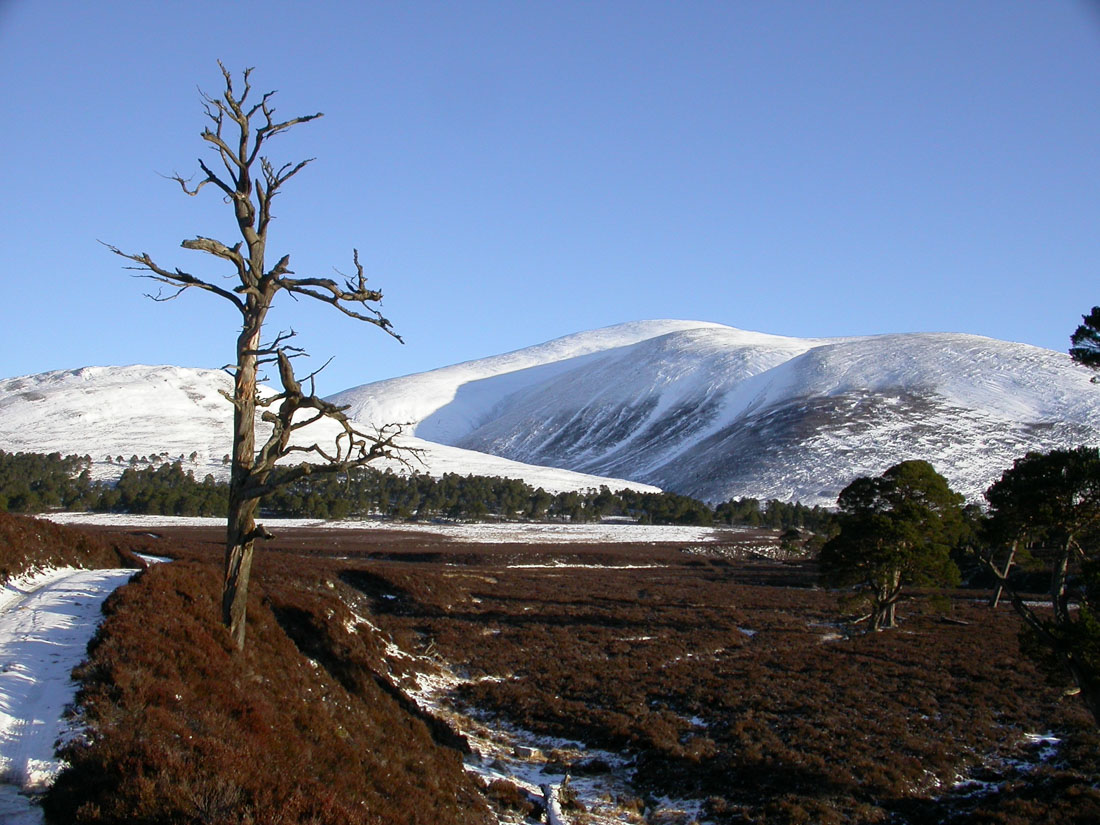 Forded the Allt, passed through the Caley pine stands at the head of the glen and then took the path up Carn Allt na Beinne. Early start on a weekday meant ours were the only tracks in the snow. 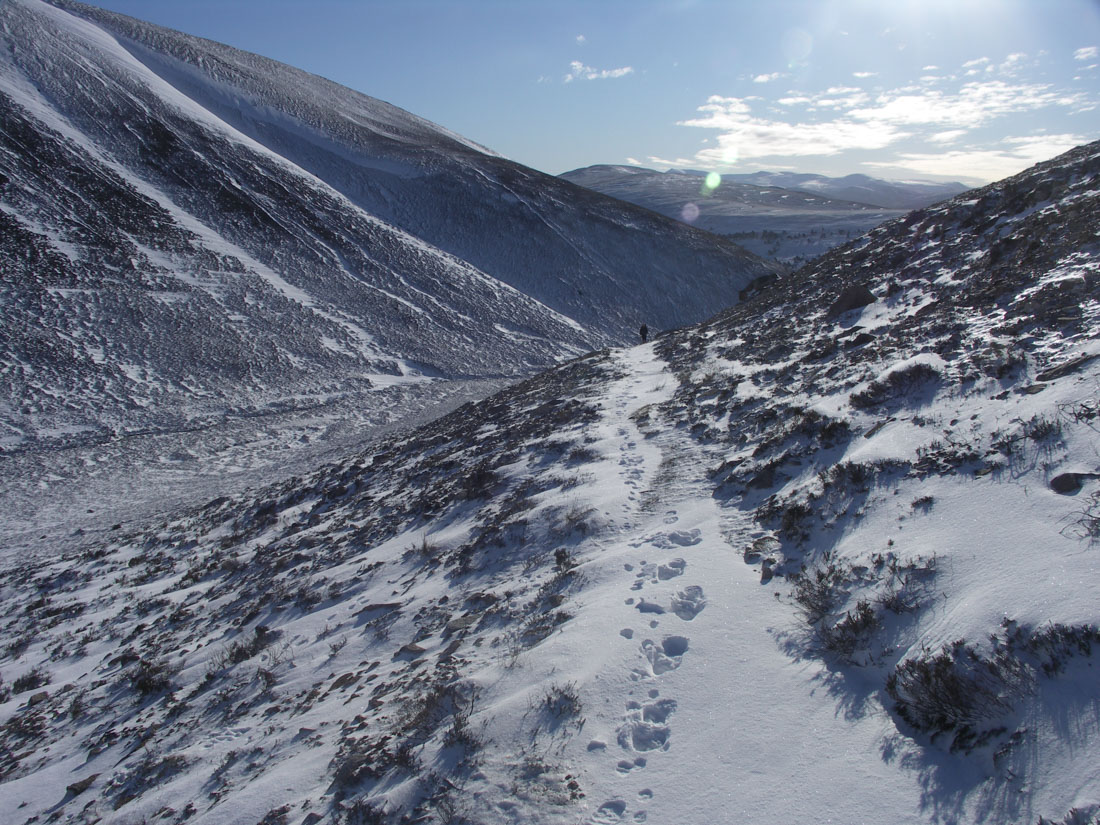 As we gained height the view to the south opened up to show us Lochnagar. 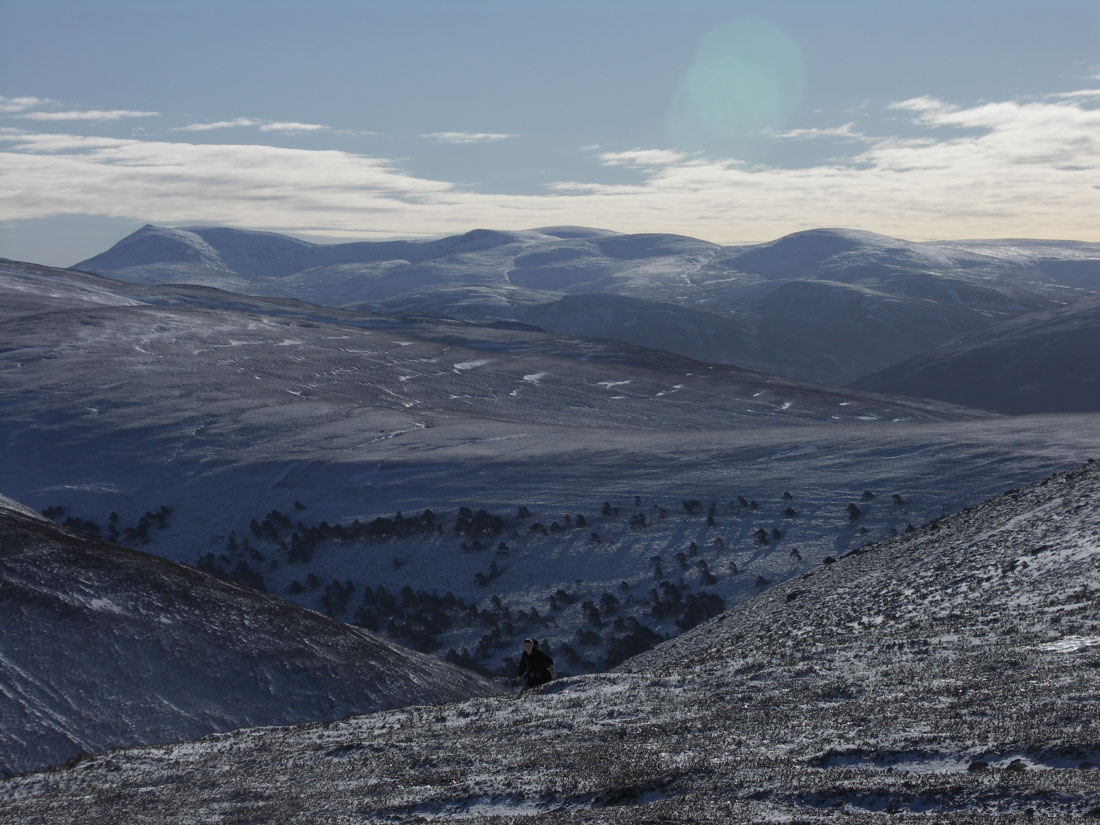 A pleasant day, light winds and perceptible sun warmth. This route up Beinn a Bhuird is a relaxed bimble. 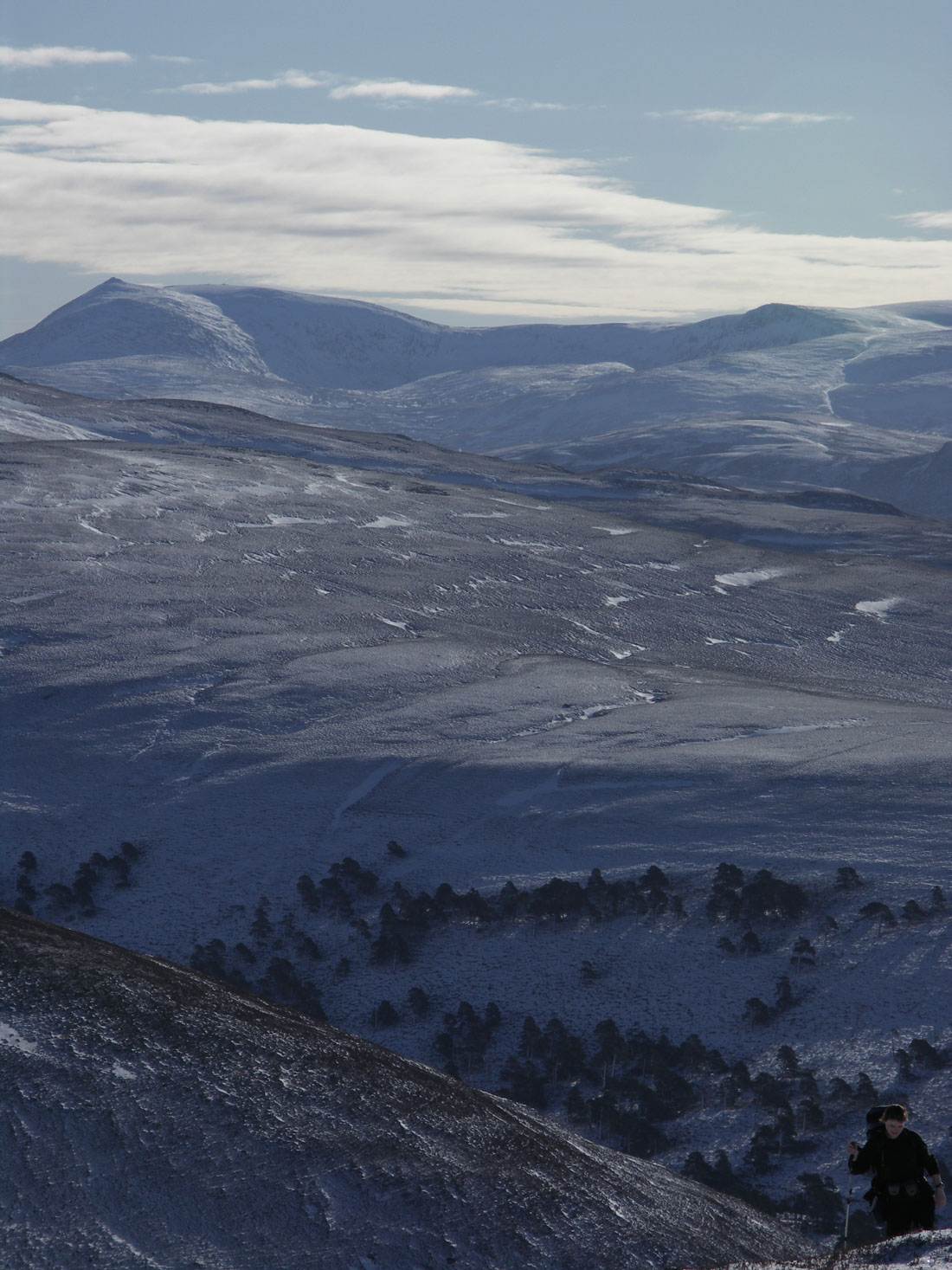 Once up to about 750m on An Diollaid the views over to the Central Cairngorm Plateau begin to open up. The hills around Loch Etchachan are visible across the Moine Bealaidh. 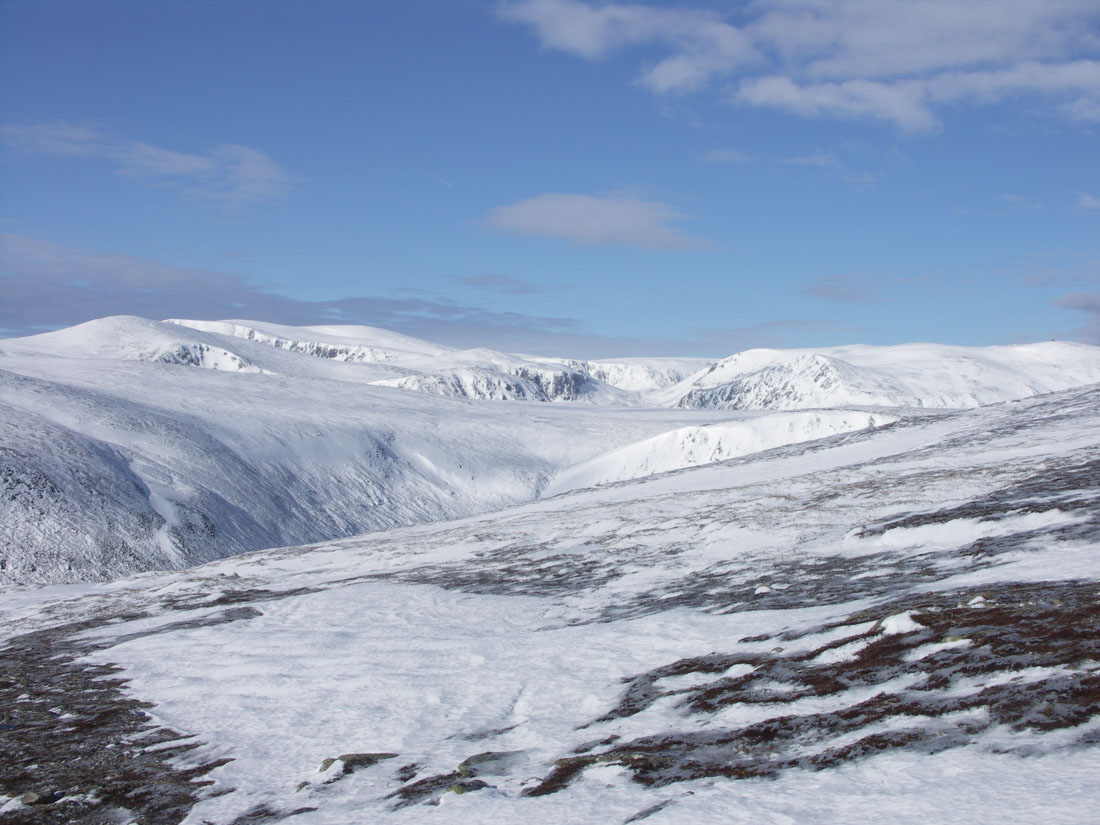 H on climb Beinn a Ghlo back 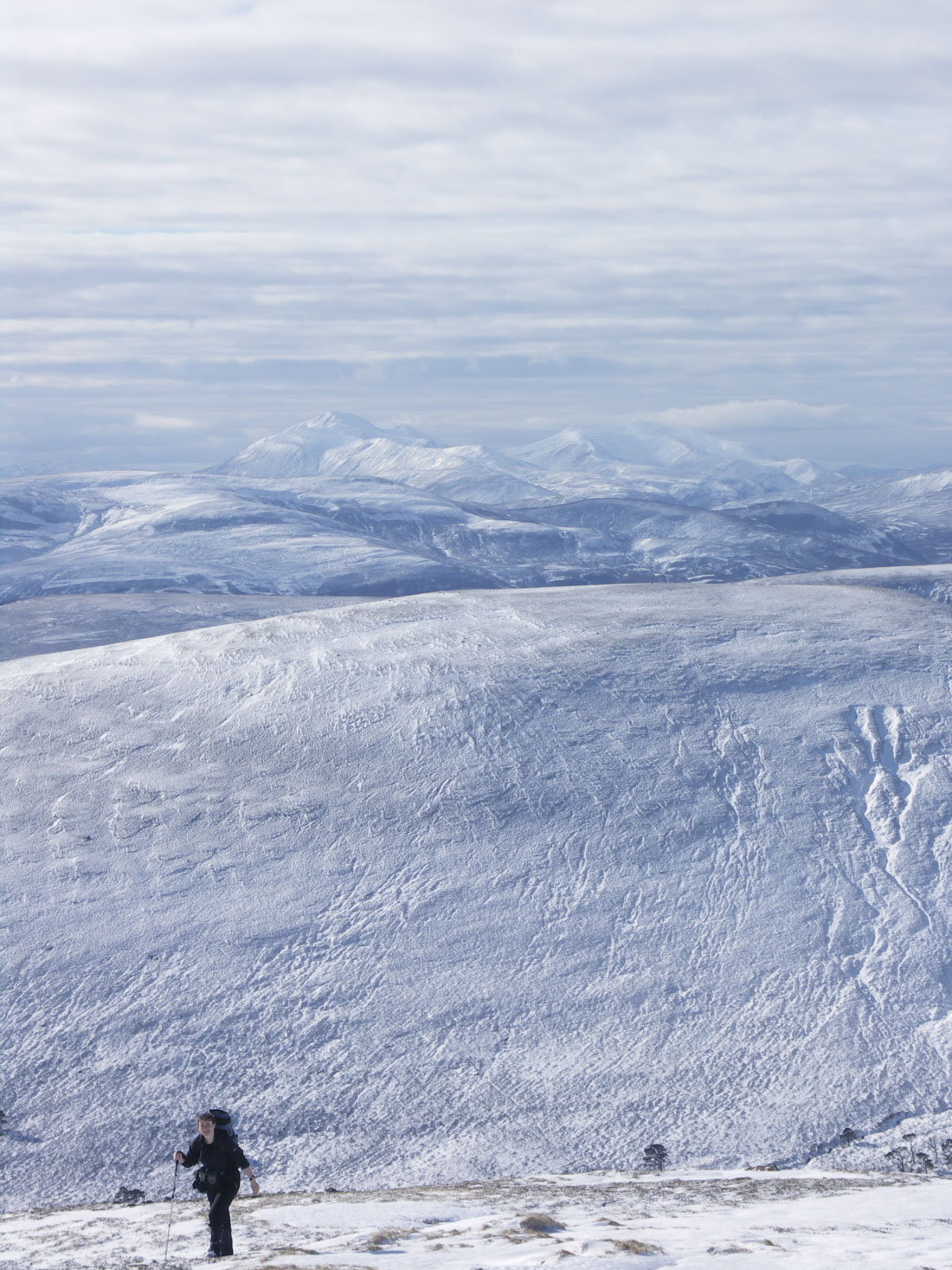 Above us the skies were clearing to blue and the cluster of munros in the central plateau were better defined. 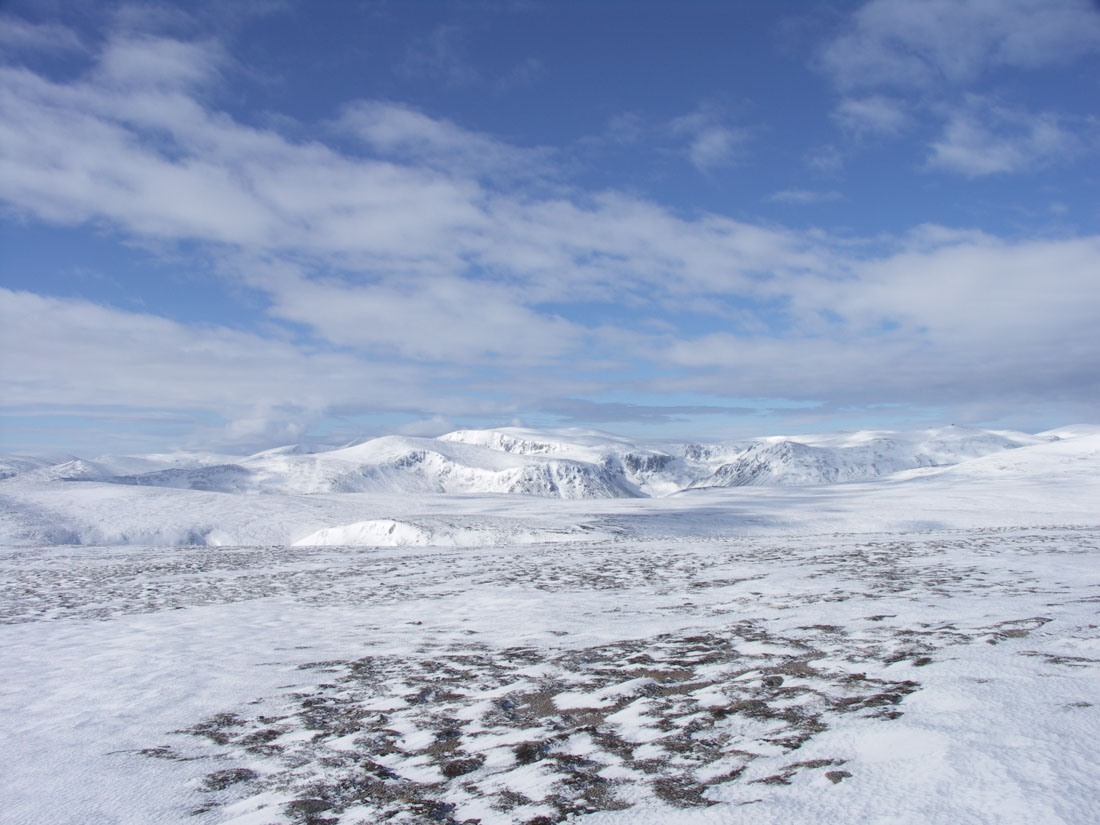 Ben Macdui and the cliffs of Coire Sputan Dearg loomed behind us. 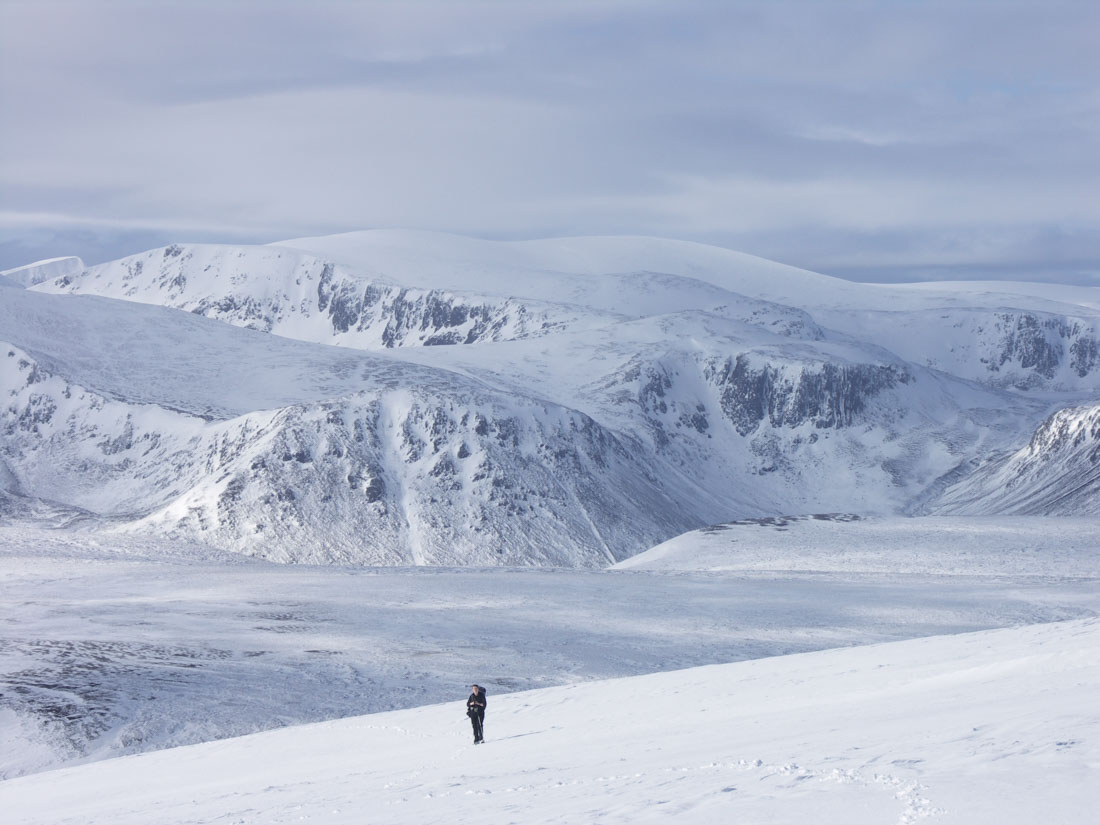 Once up to the bealach between south and north tops you’re on the rim of the huge eastern coires of Beinn a Bhuird. Vistas are panoramic in the Cairngorms.

Out along the ridge is the tor of A’Chioch – would be another couple of years til we visited this. 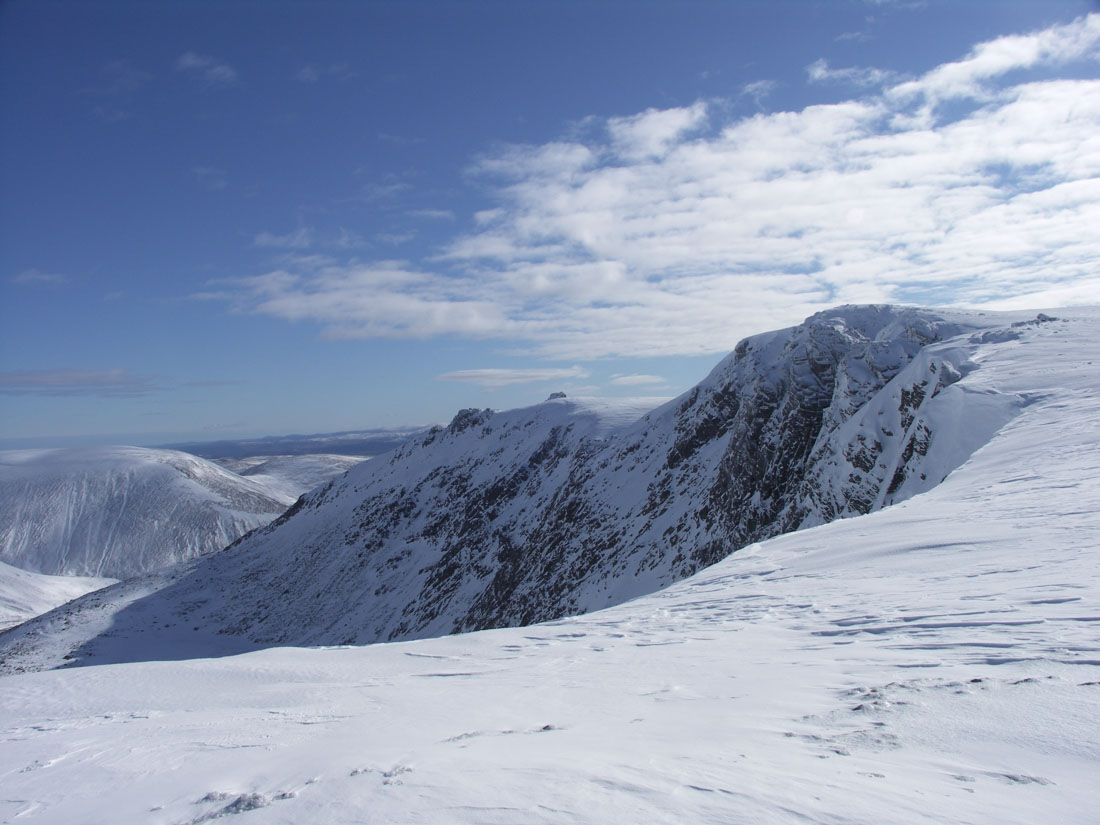 Ben Avon is a few km away and looks bland – it’s really a hill that needs wandered along to appreciate it. 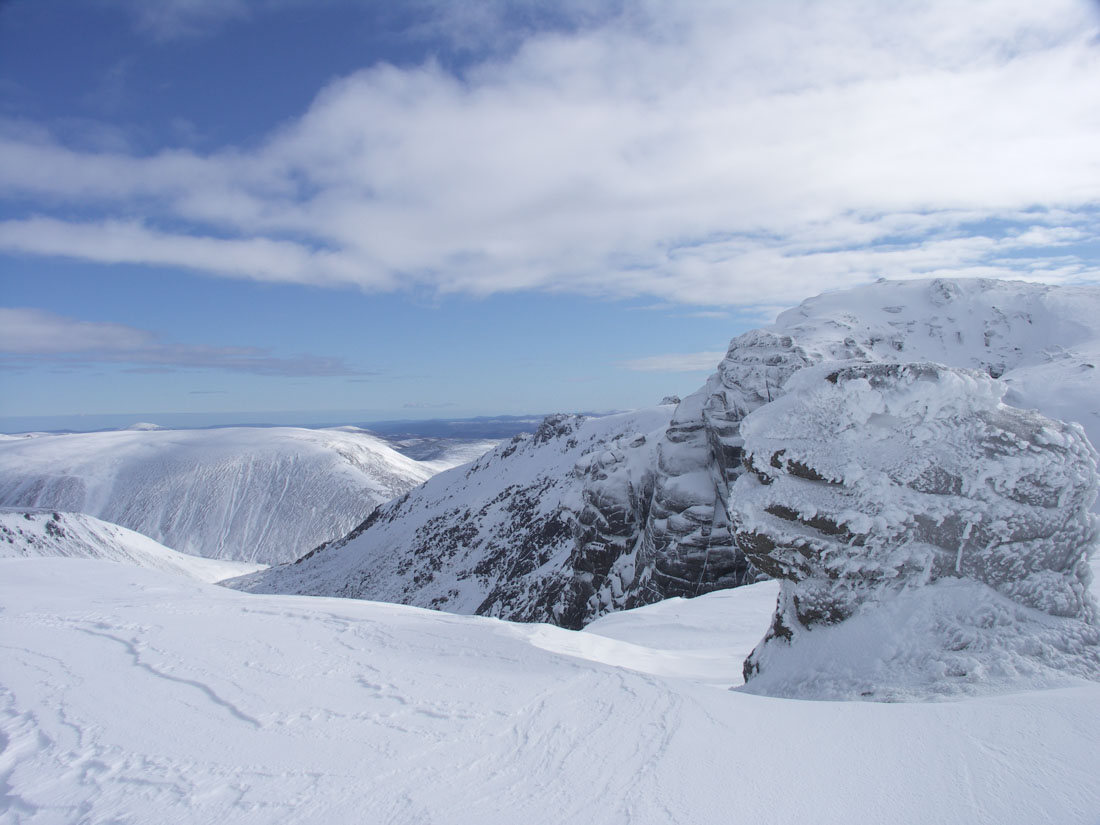 Carried on up the South top of Beinn a Bhuird, the cliffs in the Central Plateau providing the backdrop.

H on climb Etchachan cliffs back 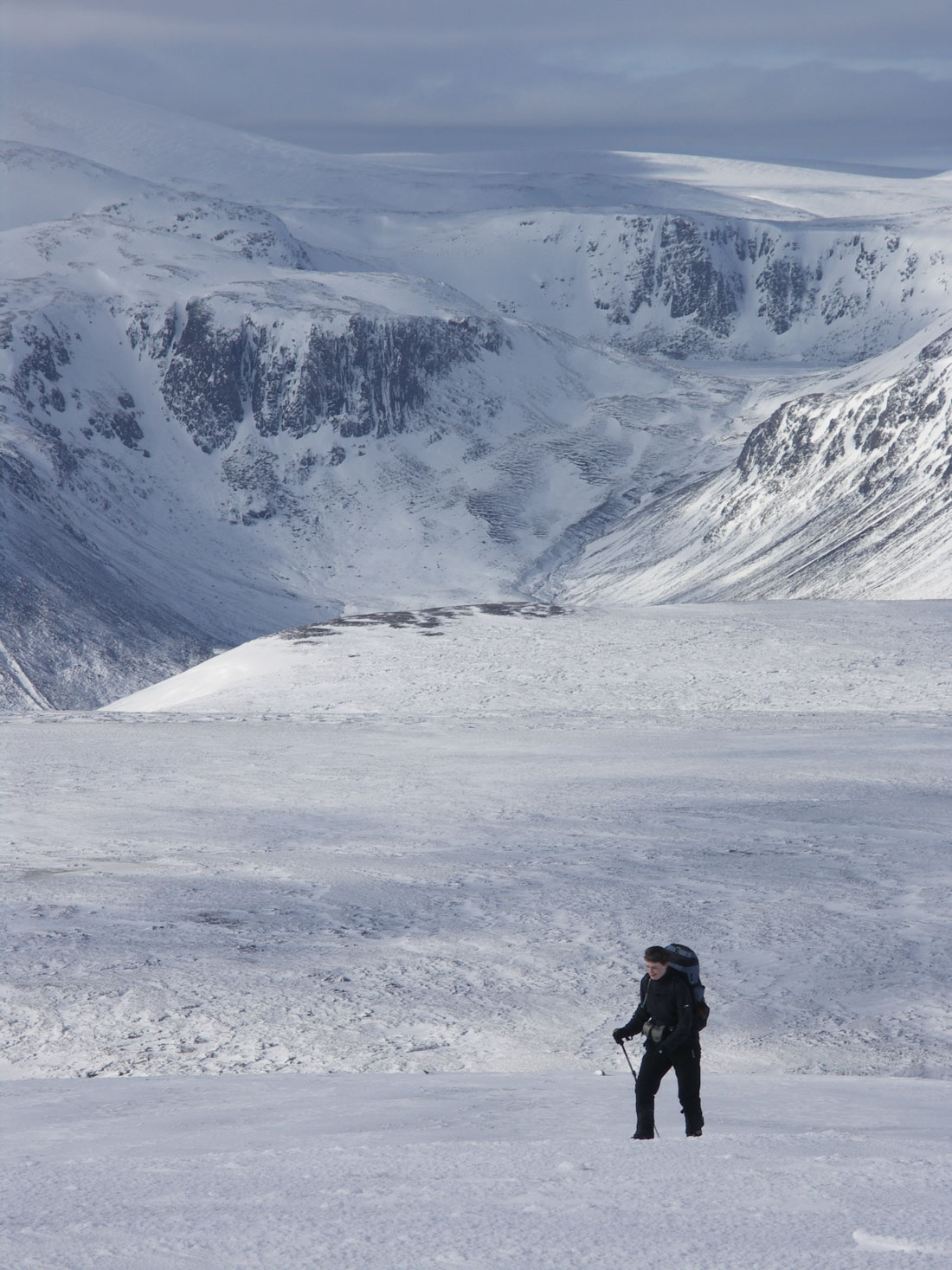 Once up on the south top we could see further across the Cairngorms to Cairn Toul et al. 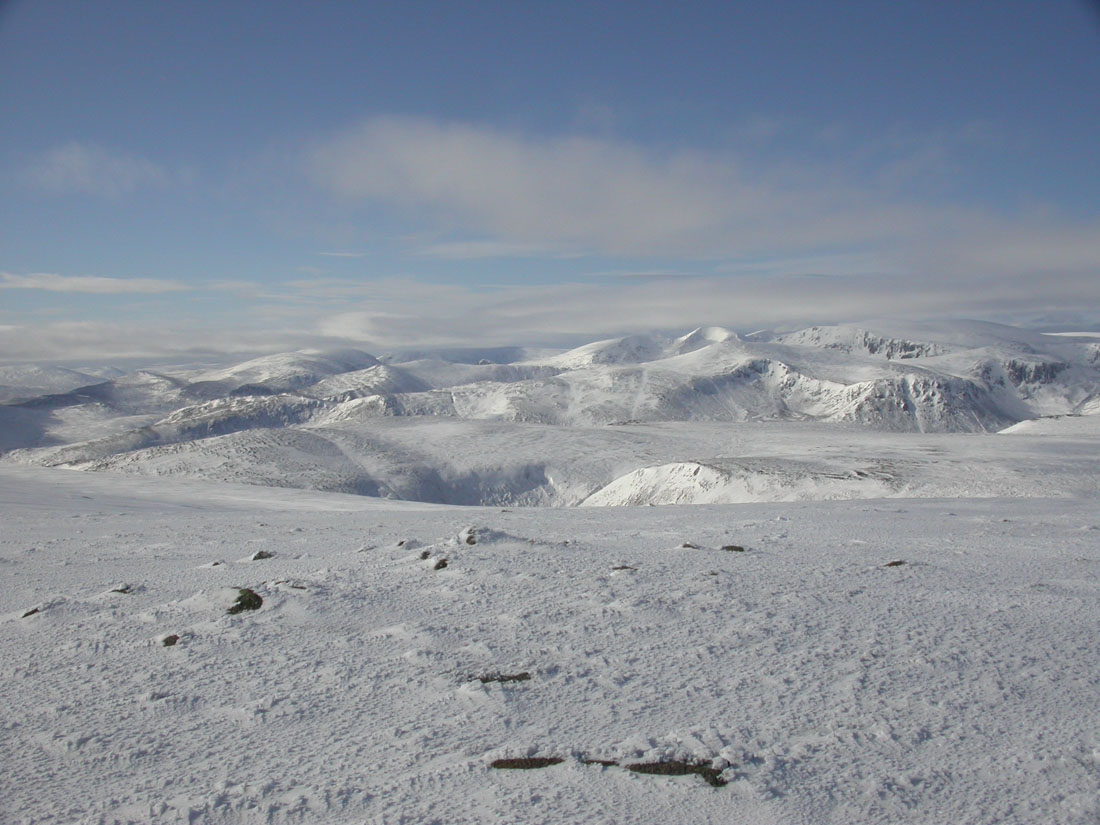 Turned and returned by the route of ascent – the plateau was starting to cloud in a bit and views were blunted.

Quite a length of walk, subsequent visits have been on camping trips which better suit the Eastern ‘Gorms – sticking a tent upon them means being able to wander over the business end of the walk for longer.