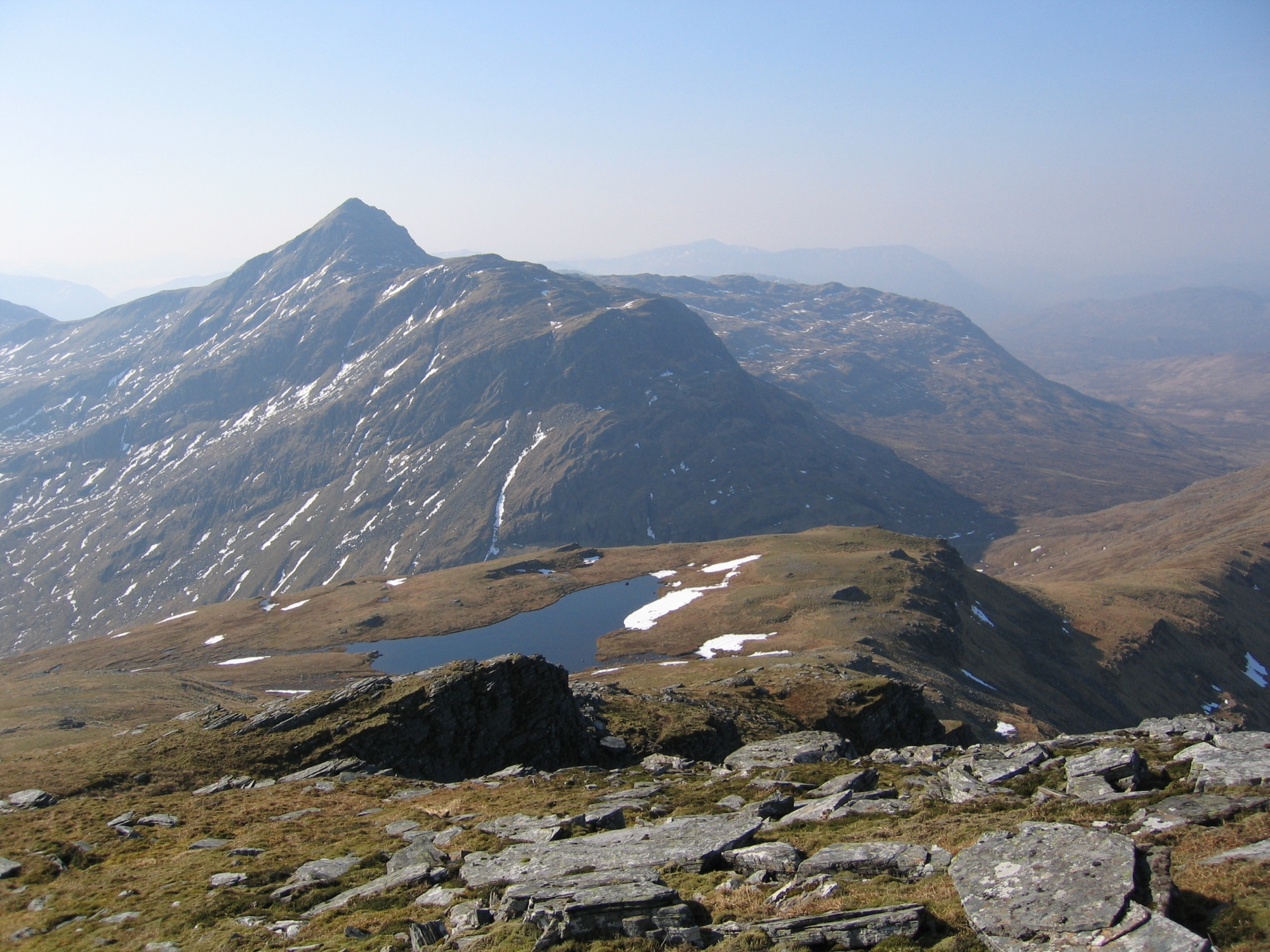 Left Inverness early, got to Craig to find a big pine tree across the drive of the car park, space left for 6 cars.

Good progress up the estate road to the wire bridge at NH 076 465 I used the bridge, Hazel, who doesn’t share my playground mentality simply walked across the river, which, admittedly was a foot lower than normal.

Nice sunshine developing on the track up to Bealach Bhernais with low cloud back in the glen E and pouring over the Bealach from the S.

Dragged ourselves up and onto Beinn Tarsuinn’s NE ridge through a rapidly evaporating fog layer/inversion.

Couple more km to the summit and the view to Bidean a Choire Sheasgaich (with a degree of excitement as only previously seen this hill in the books).

Continued along Tarsuinn’s ridge to the W top and dropped the big packs for later.

Simple descent down to Bealach at NH 046 423. At this point the ascent of Bidean a Choire Sheasgaich was giving me the willies, it looks like a cliff face. Picked our way up along the wall then a minor scramble of around 10-20m onto a flat area half way up. Hunted around and found the grassy gully described in SMC book and easy but steep pull to top of cliff.

After a well earned break pushed on down to Bealach and on up Lurg Mhor. Outbreak of spontaneous back patting and self-congratulation ensues.

We had planned to reverse route but didn’t fancy the cliff descent on Sheasgaich so we returned to Lurg Mhor Bealach NH 054 407 and took advantage of low heather and dry conditions to traverse round Sheasgaich E side maintaining as much height as possible.

Frankly winter fitness levels were not very impressive and I was feeling a bit unenthusiastic re-ascending Tarsuinn.

Pitched tent on Beinn Tarsuin W top with a few hours to sunset and watched it set behind Applecross.

Few degrees of frost overnight but quite still, sun rose behind Sgurr nan Conbhaire and got us going.

Took a slow amble back along Beinn Tarsuinn in fast warming temperatures and dragged out the return along original route til early p.m. so as not to waste the day. Beautiful morning.

Slightly less hazy for views across Craig to Coire Lair on road down.