2007 saw us starting to refine our camping gear a little. Still carrying way too much weight, but working on it. We’d already been out to Sgurr na Ciche and Fisherfield on what had been a very mild March. A mid-April weekend was offering mild, hazy weather so we decided on a lower camp with some hills between.

Parked up at the Linn of Quoich parking area and got going. A nice morning, Caley Pine woods are always pleasant. 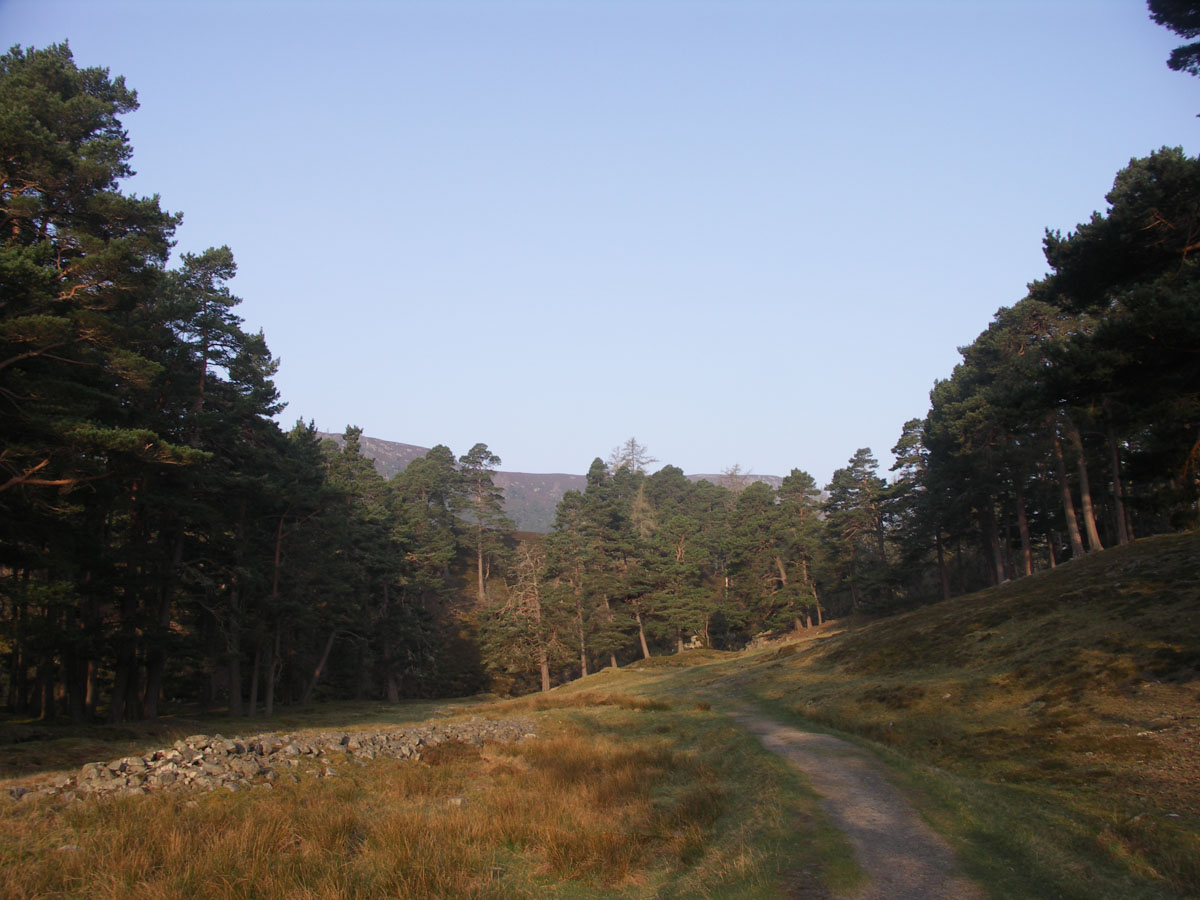 Headed through the pines on the east side of the Quoich Water before crossing the bridge a few hundred metres up. 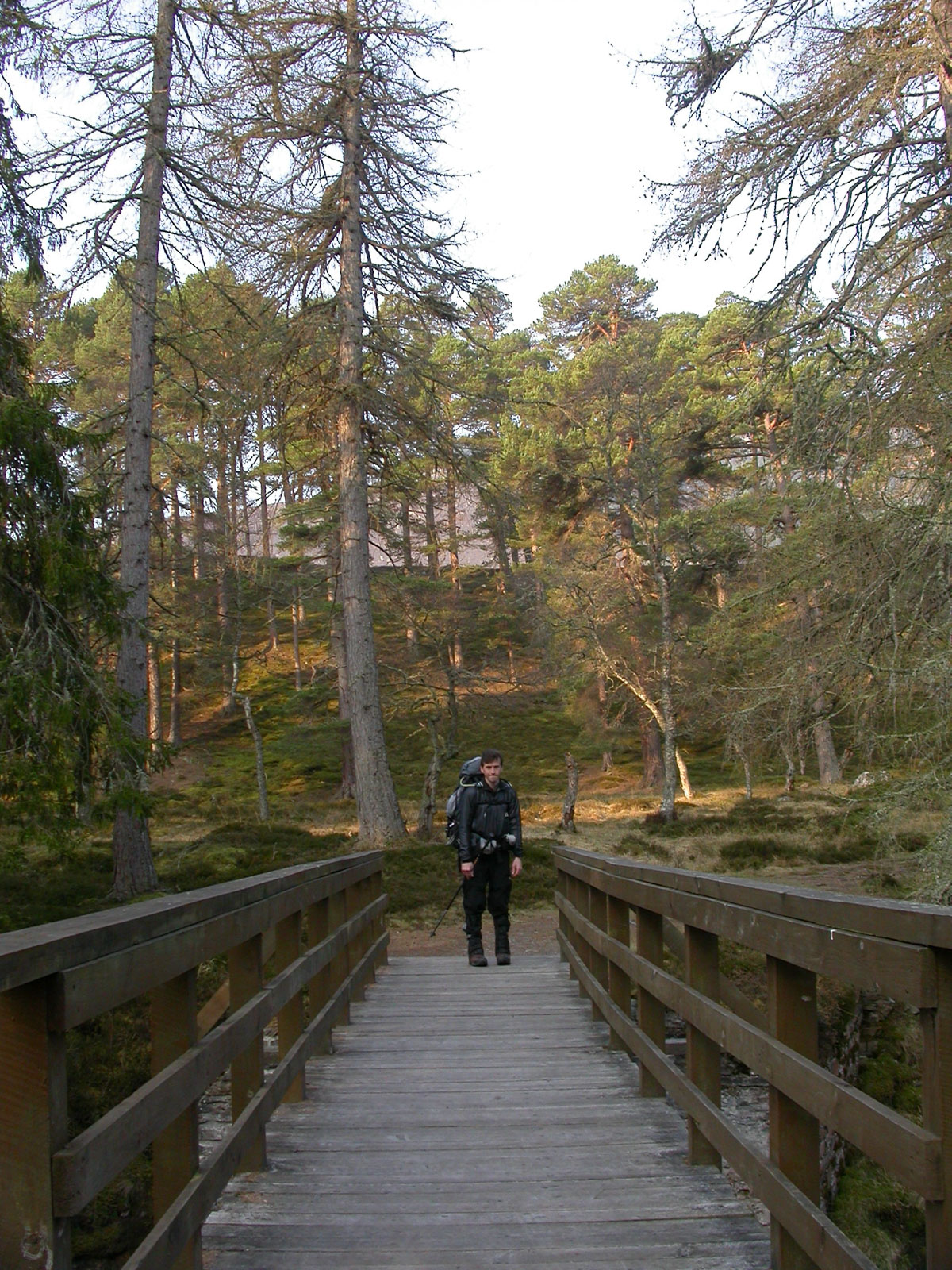 A very hazy day – but mild. The sounds of Spring were welcome after the long quiet of winter.

Beinn a Bhuird from Linn of Quoich 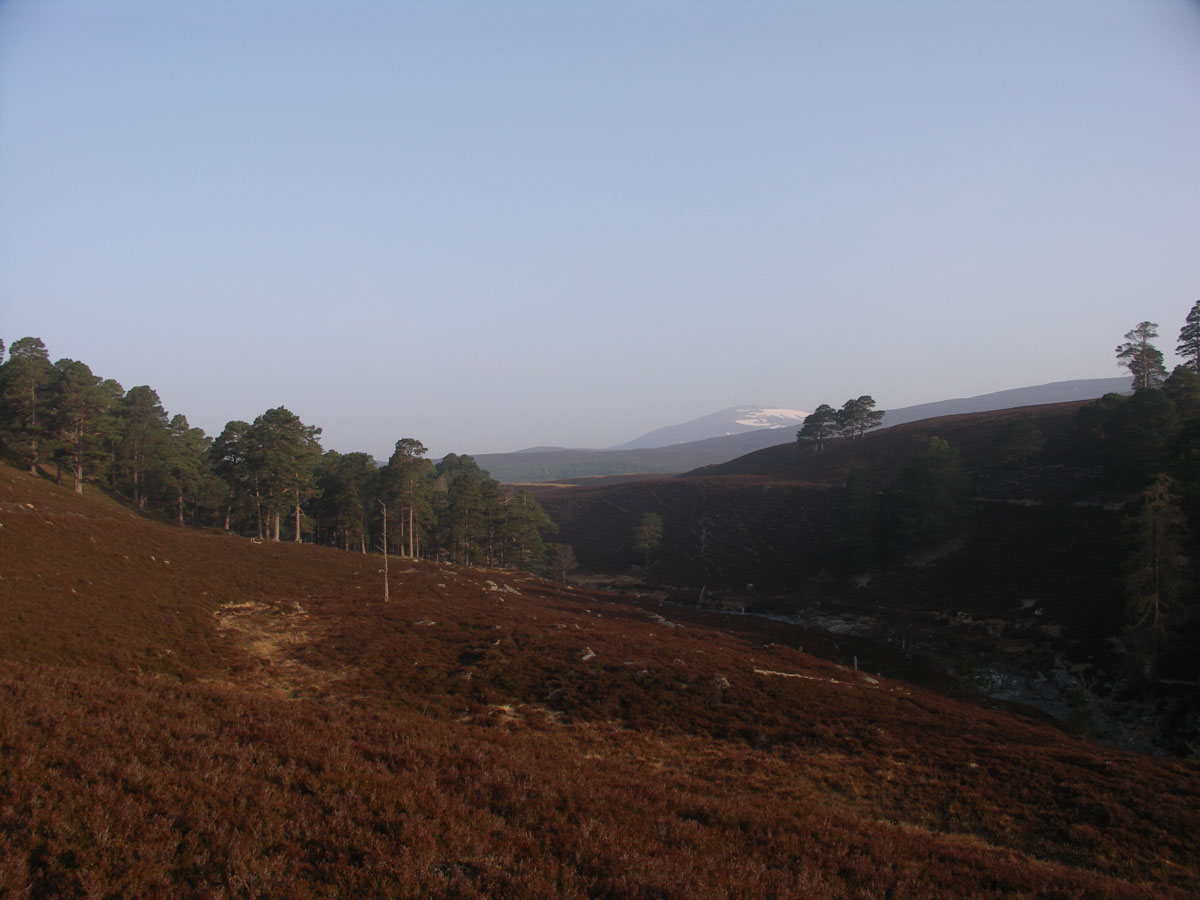 Glen Quoich is a pleasant walk in its own right, we were aiming for the pine woods at the north end.

There are some characterful old dead pines at the north end where the view of the south top of Beinn a Bhuird (climbed in snow only the month before).

Pine and Beinn a Bhuird 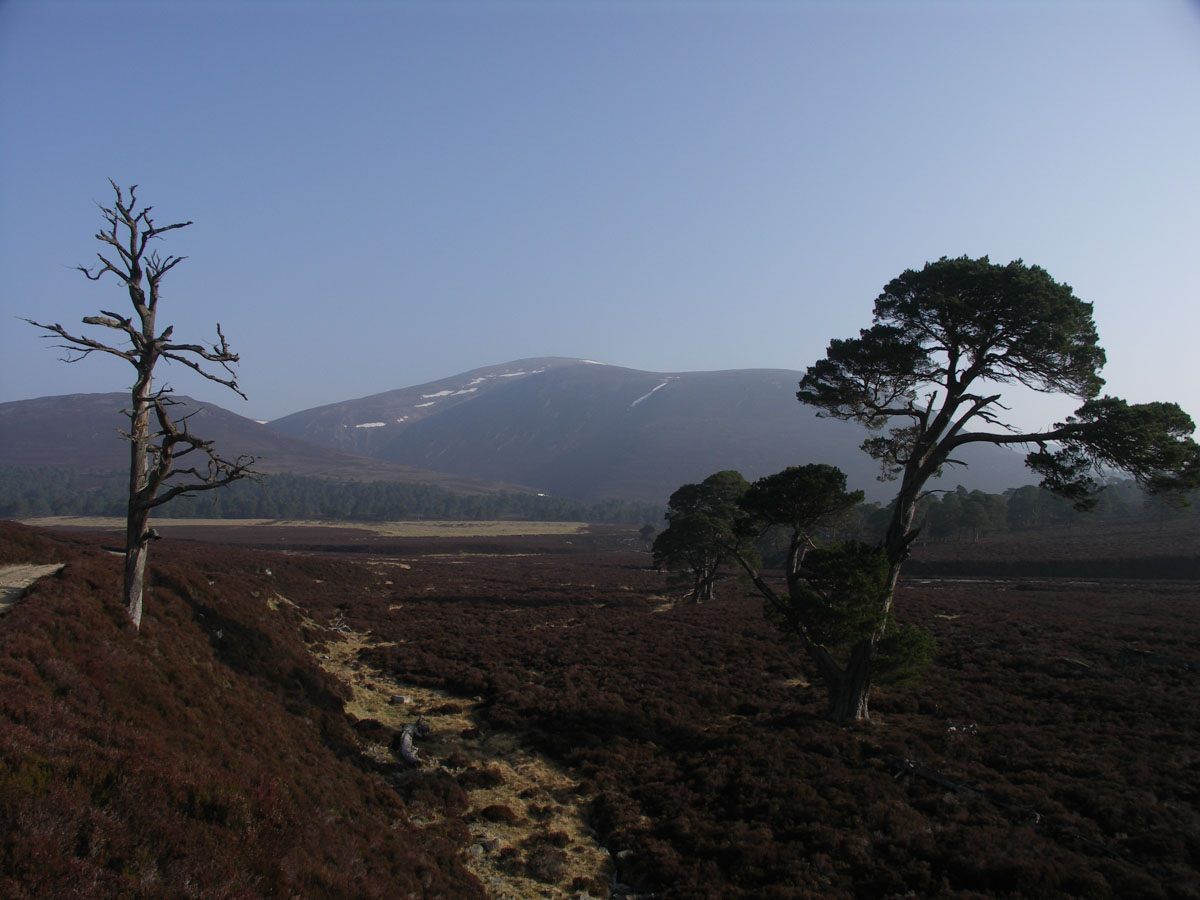 We forded the Allt a Dubh-ghlinne and cut NW through the pines towards Dubh-ghleann.

In 2007 we were carrying much heavier packs and tended to plan routes allowing us to drop most of the weight and complete a loop from there.

Stashed the gear in the woods and then carried on east uphill through heather towards Poll Bhat.

The pools and streams were alive with amphibians. 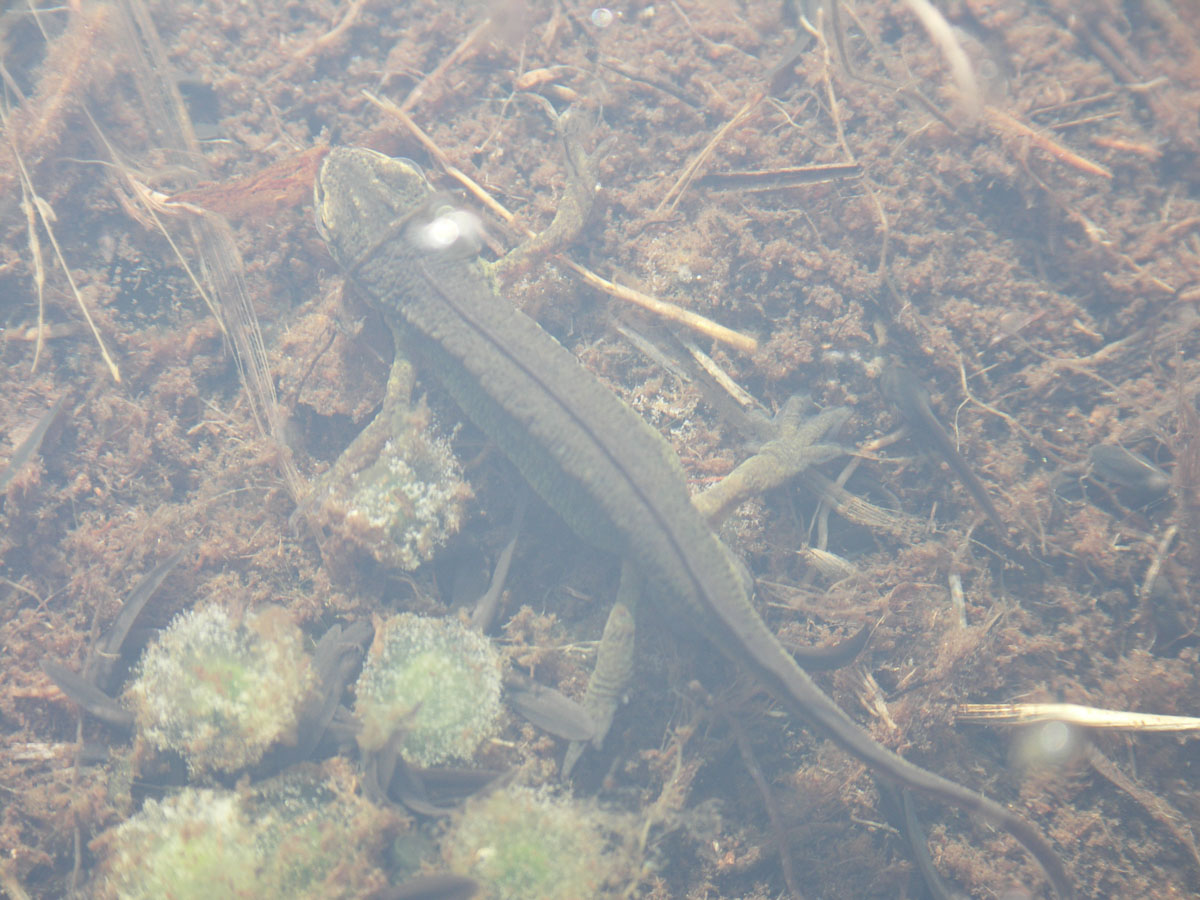 Stopped for a rest at Poll Bhat, an interesting little nook in the side of the hill. 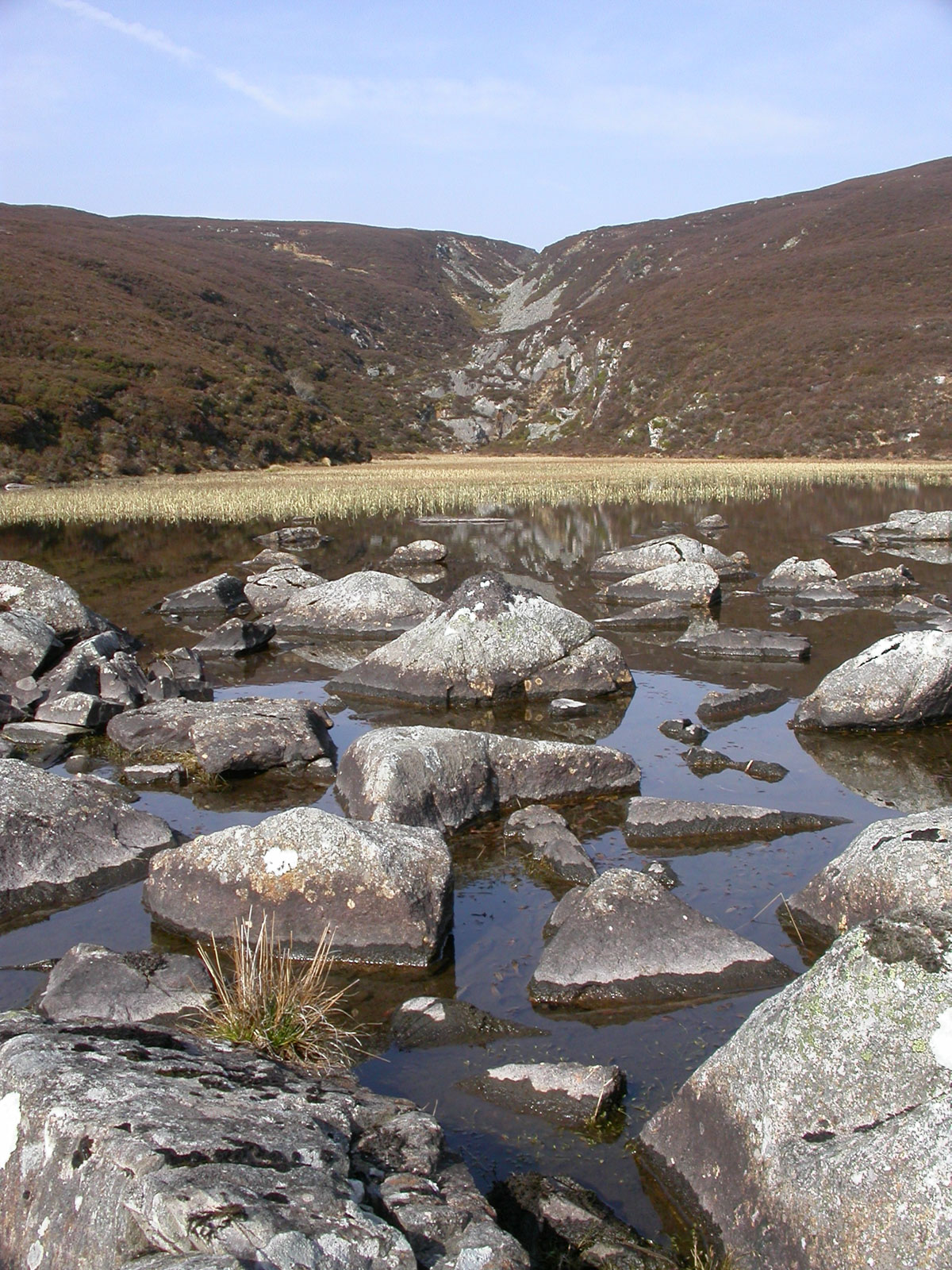 Carried on from there up the heathery slopes of Beinn Bhreac. A lowly munro by Cairngorms standards.

The day was very hazy indeed – visibility was very poor. 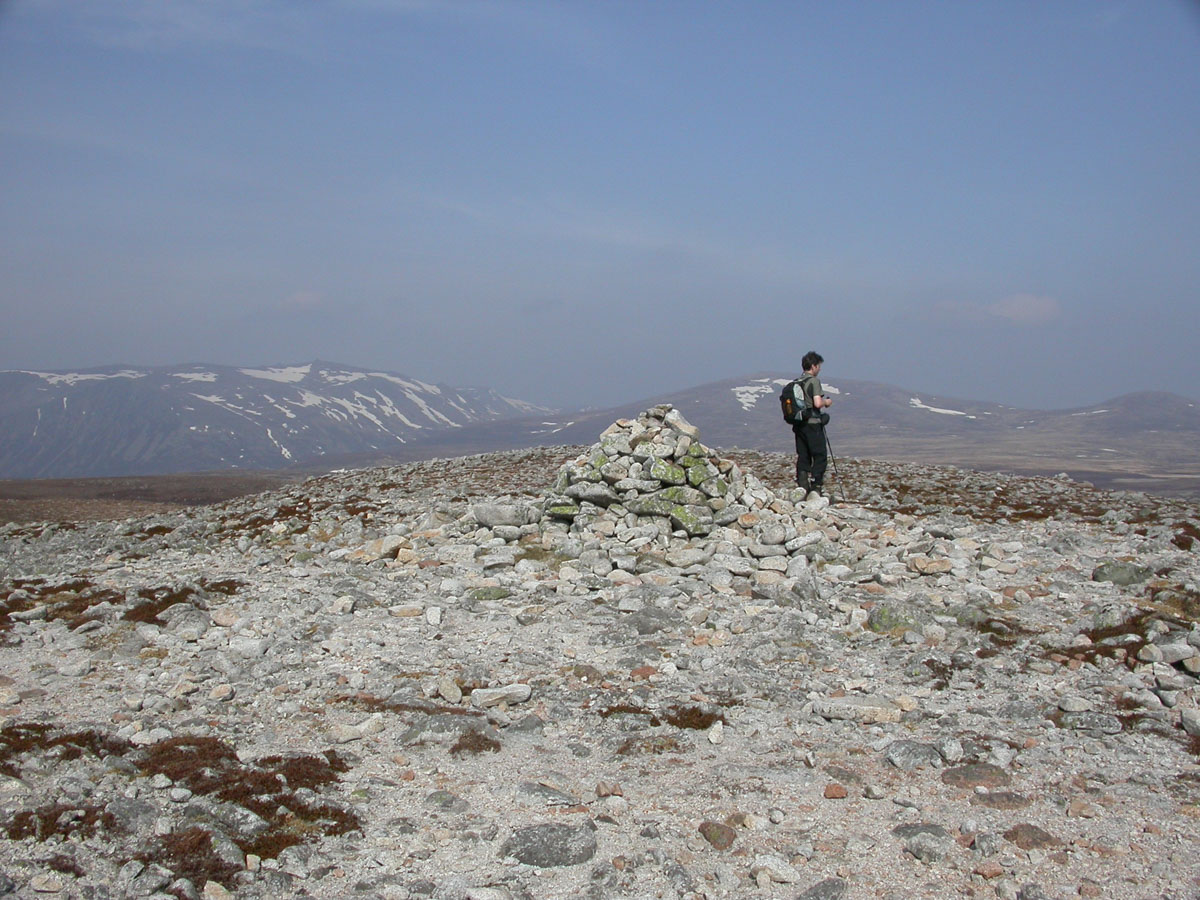 Cairn Toul was holding some snow – but even sunlit snow was only just visible in the haze. 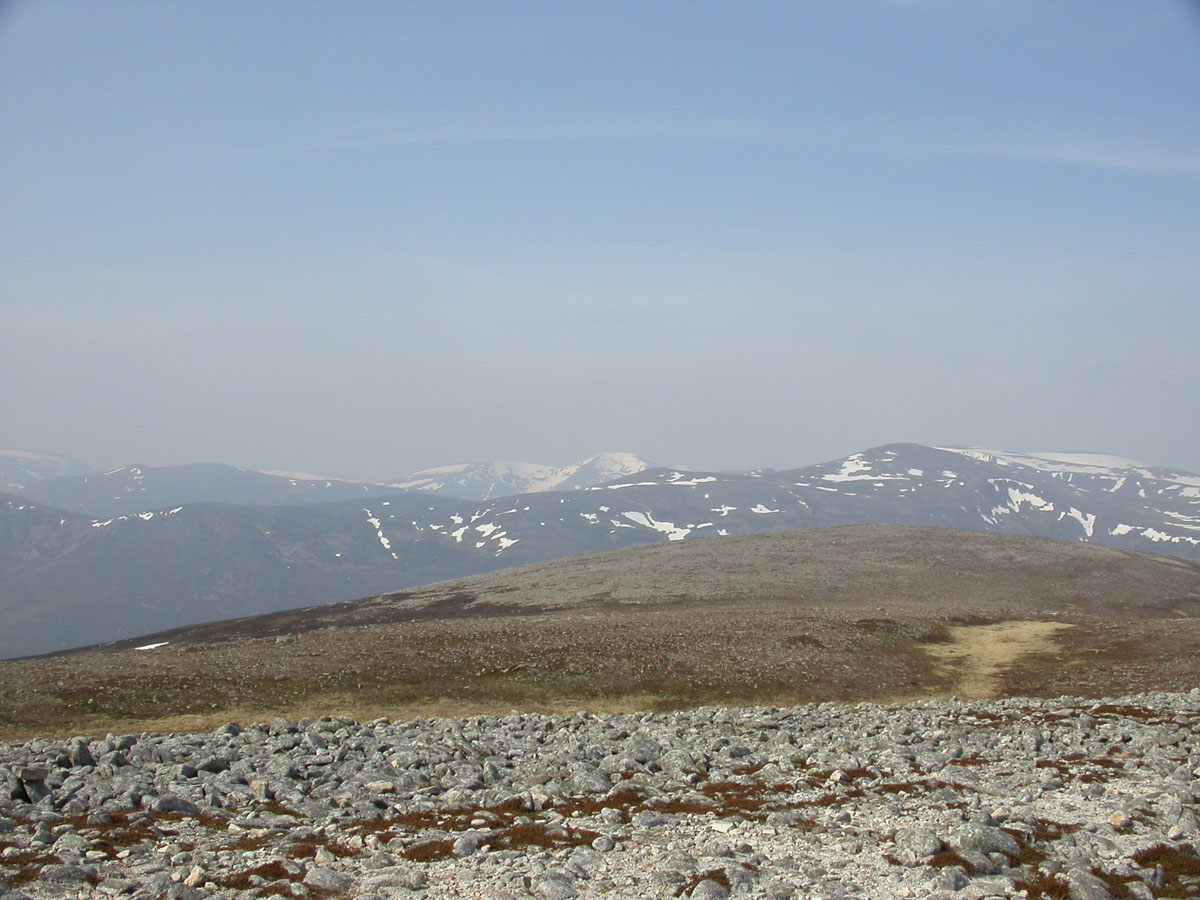 From Beinn Bhreac it’s a plod across the mossy expanse of Moine Bealach. We had nowhere to go fast, so went nowhere fast. 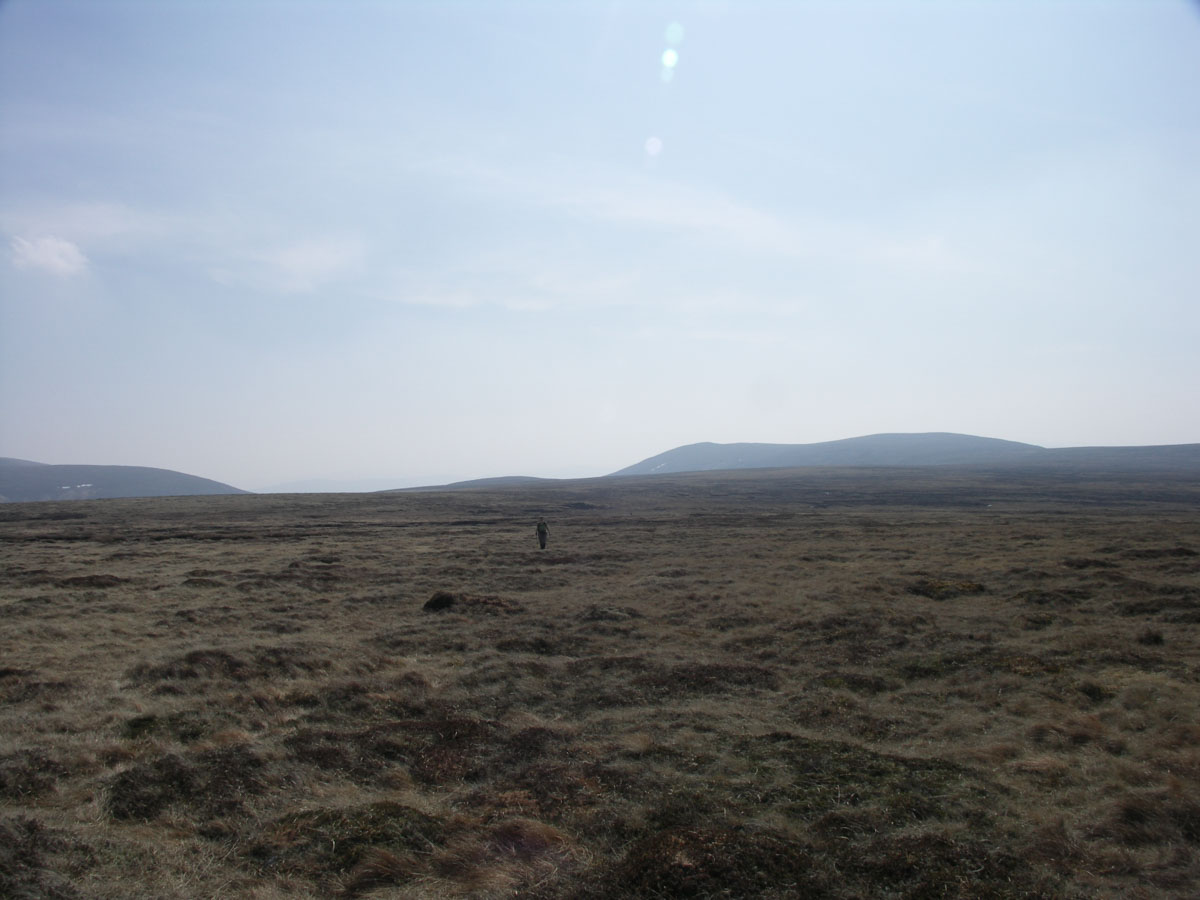 Ben Macdui looks a long way above us – and it is. The snow fields are still present up there. 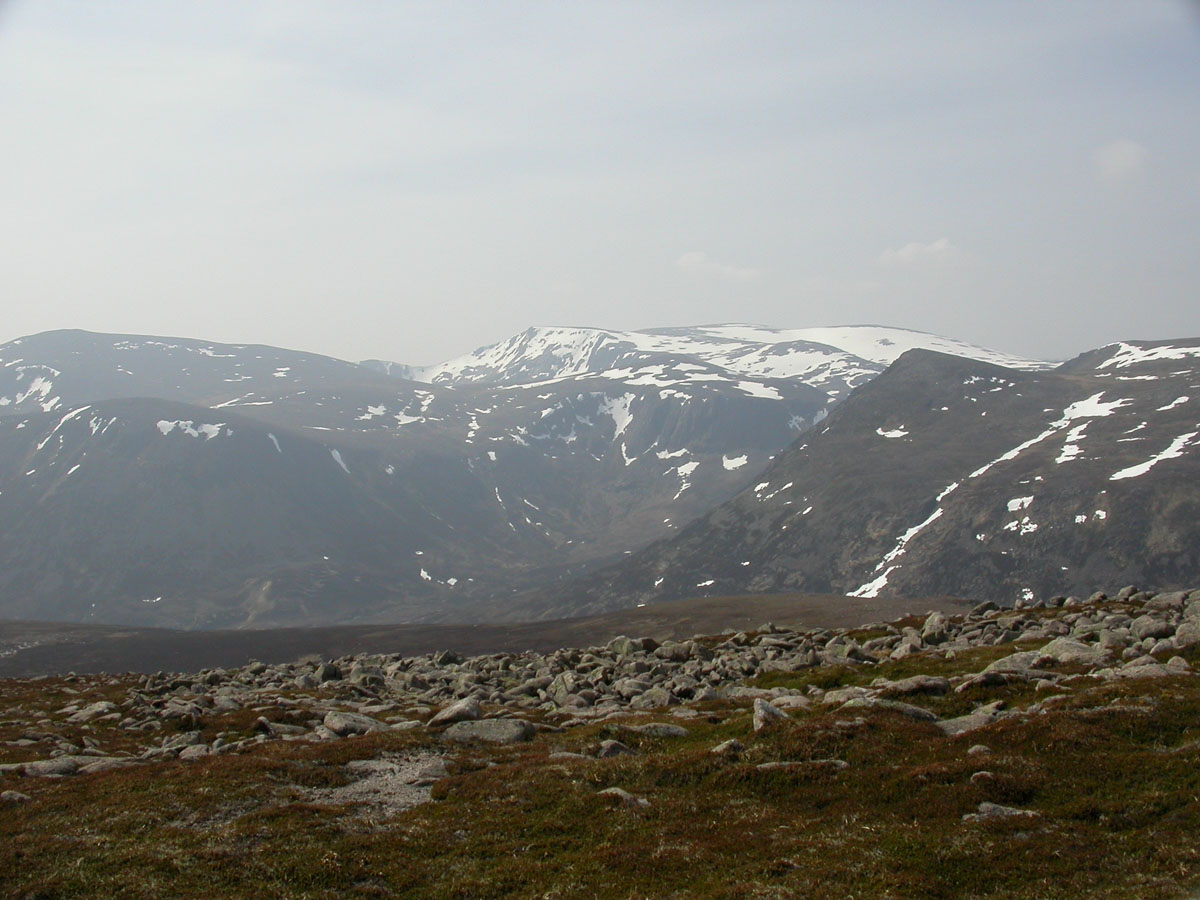 It’s about 4km from Beinn Bhreac to Beinn a Chaorainn, eventually reached the summit of the second munro.

This hill sits across Lairig an Laoigh from Beinn Mheadhoin. We usually visit those hills from the Aviemore side. 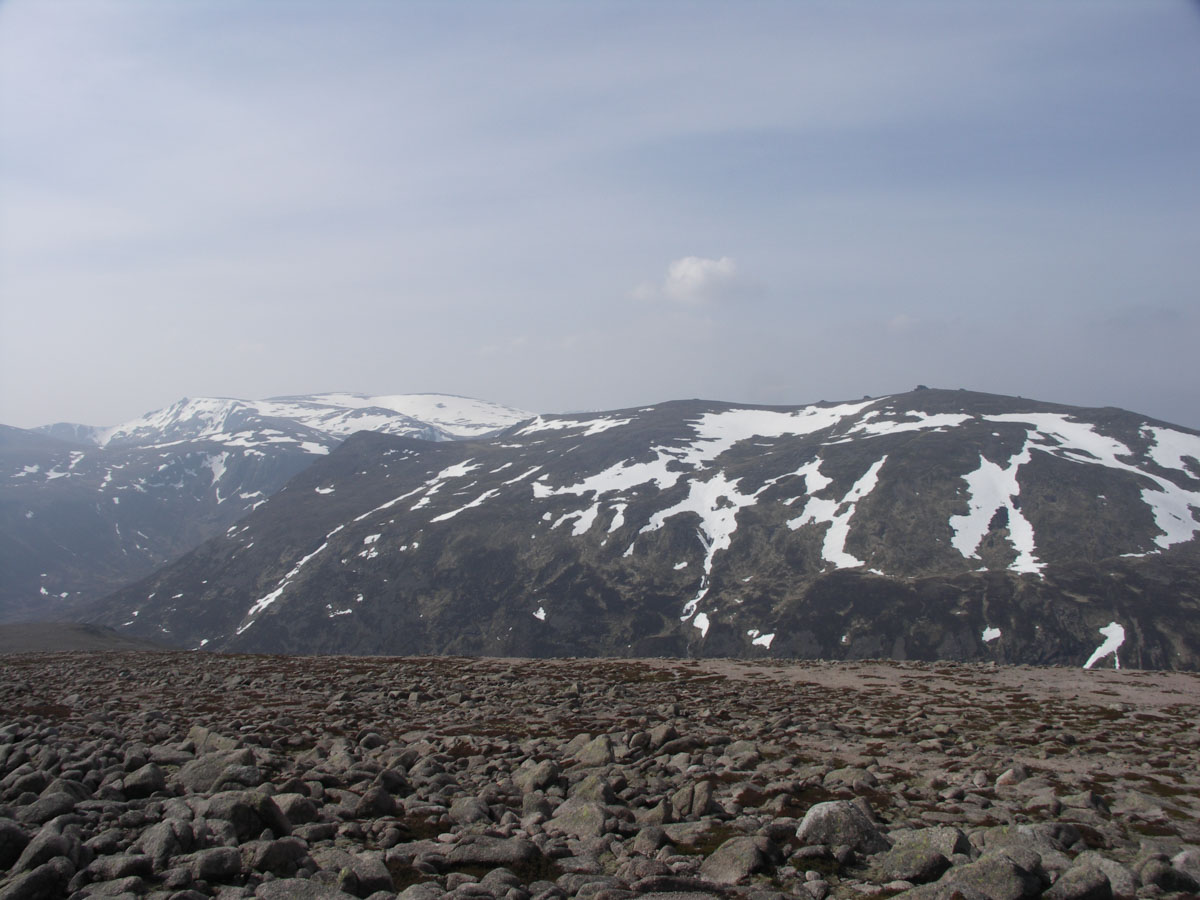 Had another break on Beinn a Chaorainn before starting back towards the camping gear. 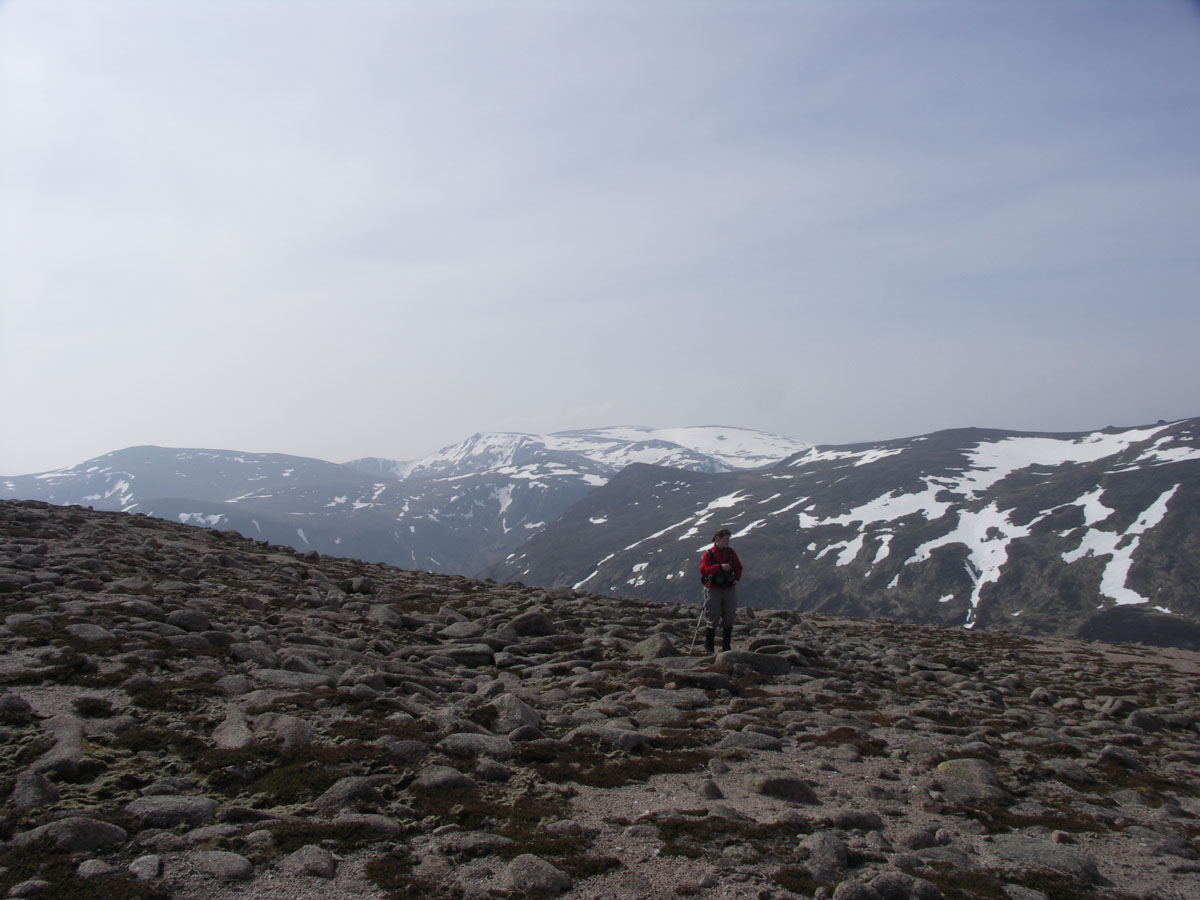 The frogs were burrowing into the pool mud as we walked by, guarding this year’s spawn. 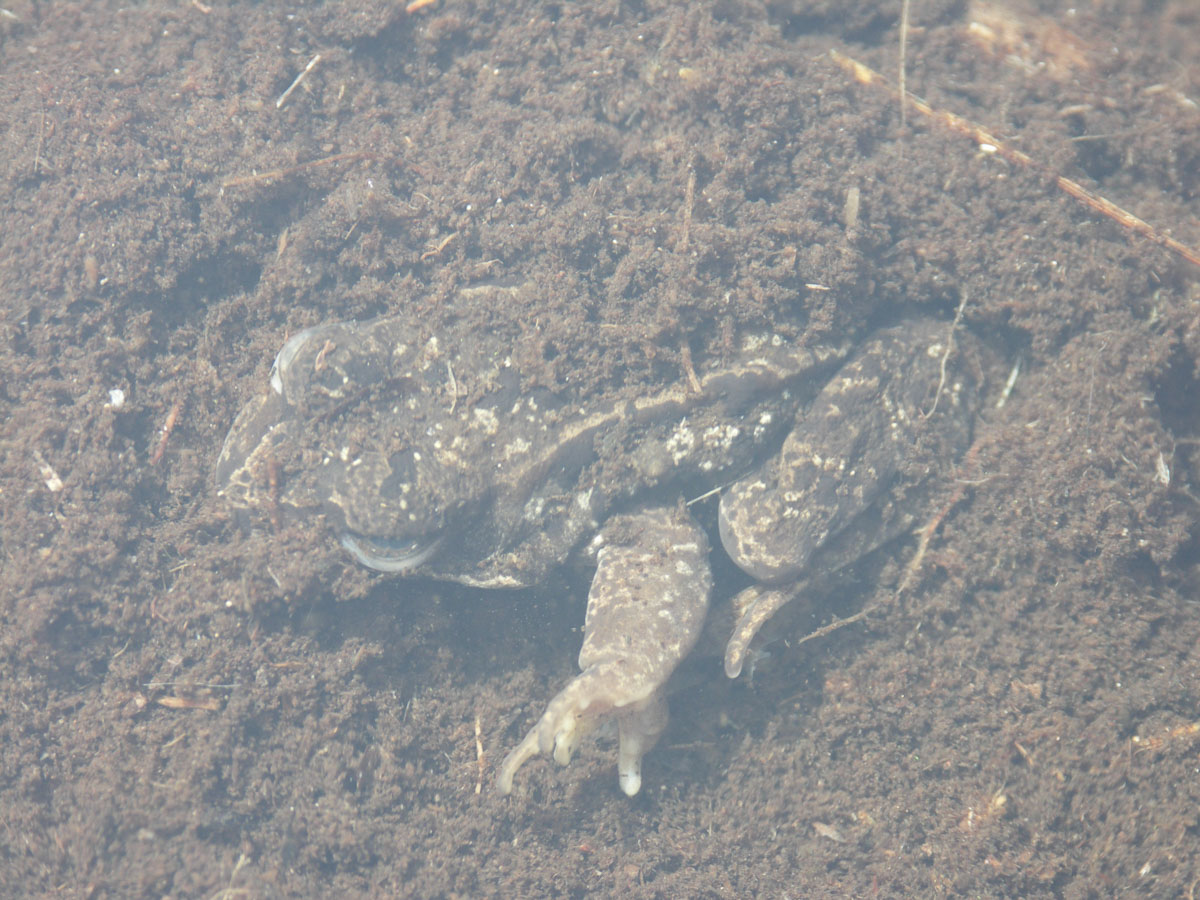 We’d decided to head back via Glen Dubh – no paths marked but the terrain is fine for wandering up here. 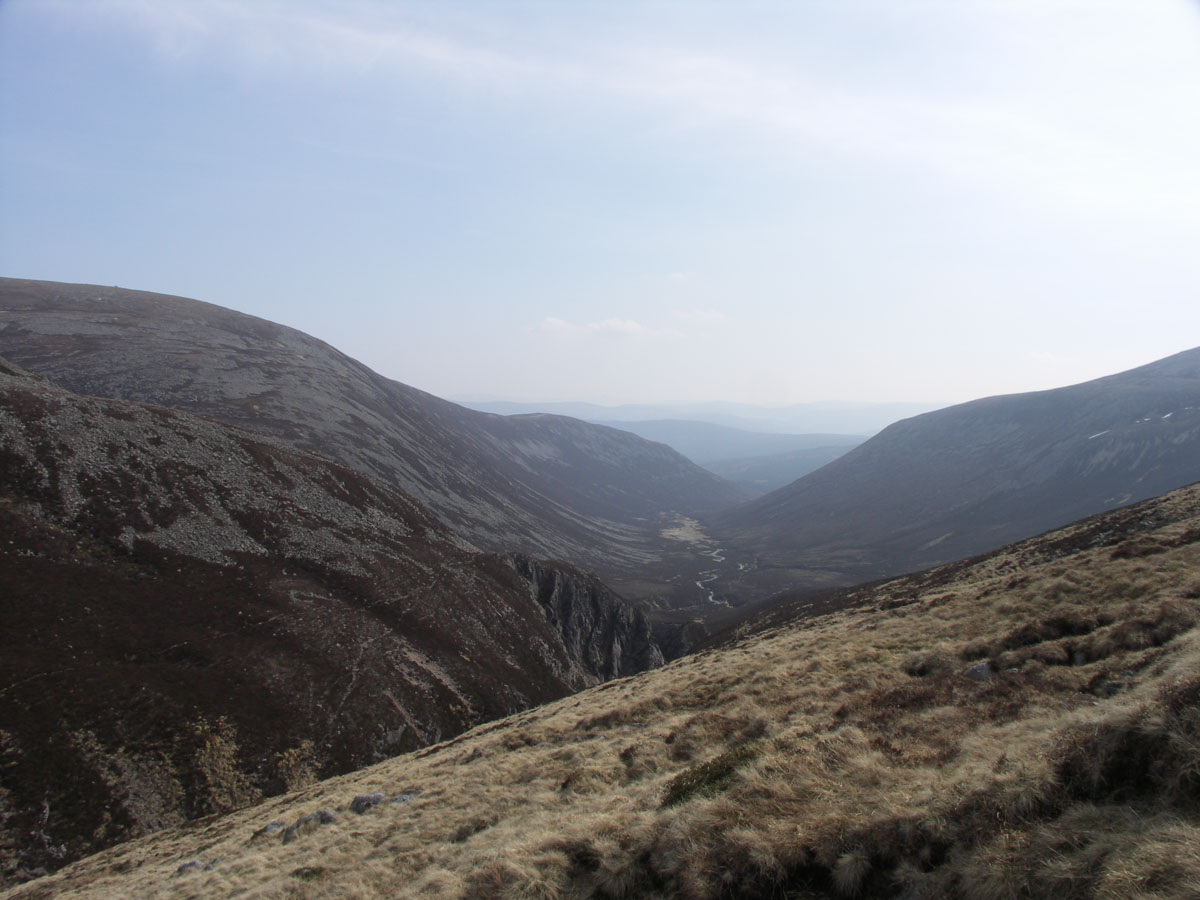 As it happens there is a path along Dubh-ghleann. Made fair progress back to the woods.

N back along Dubh glen 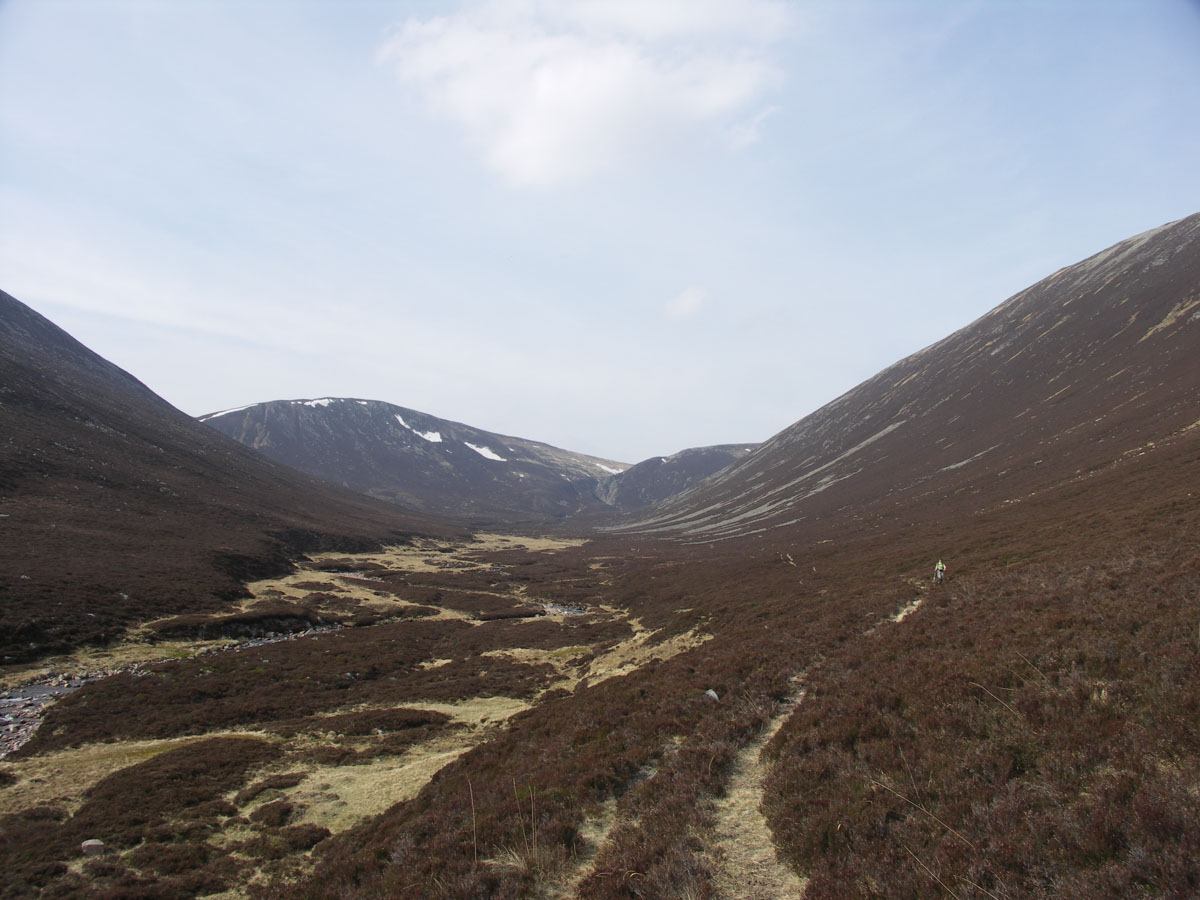 Retrieved the gear, found a flat space and pitched the tent. A nice spot. 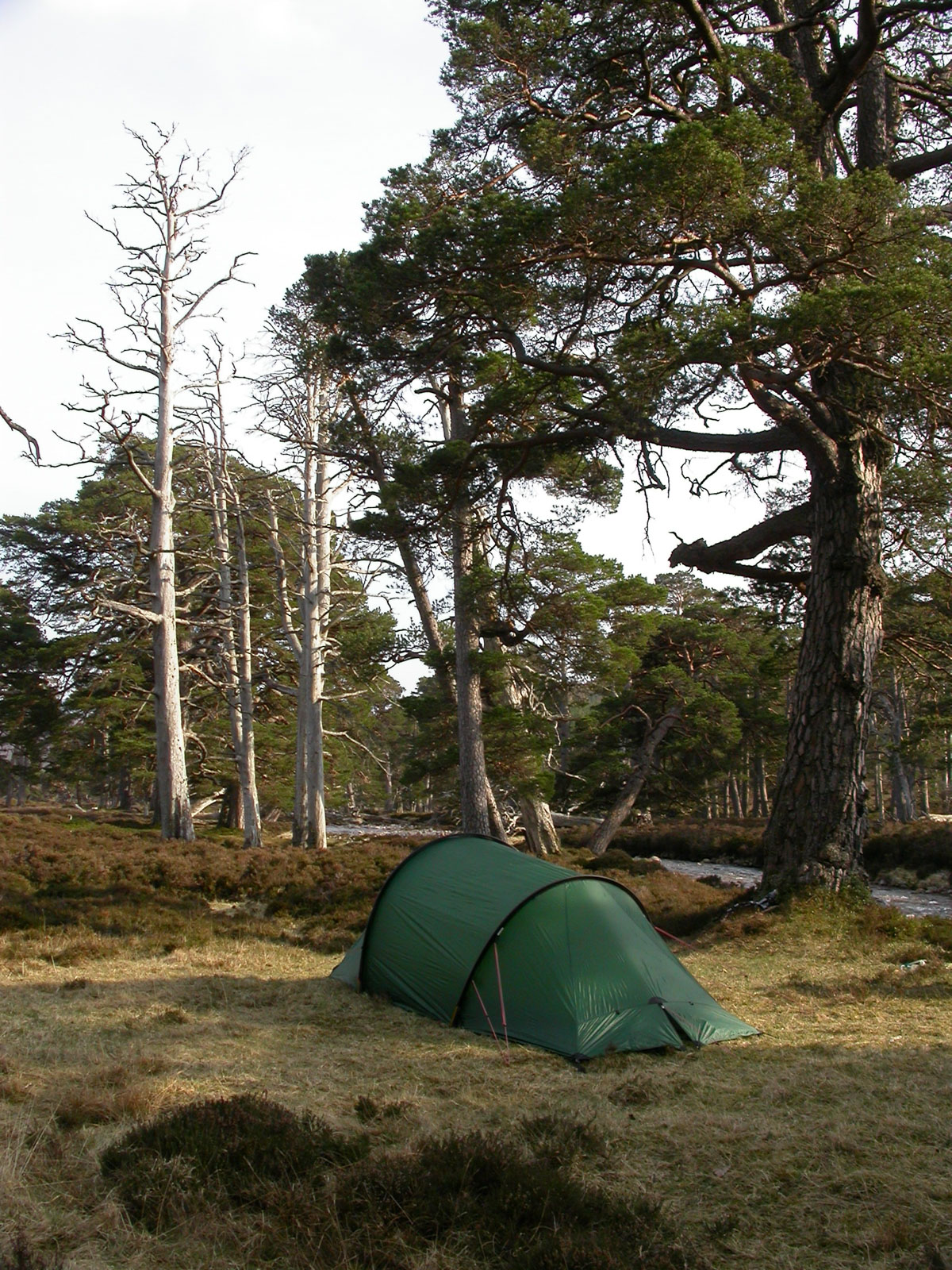 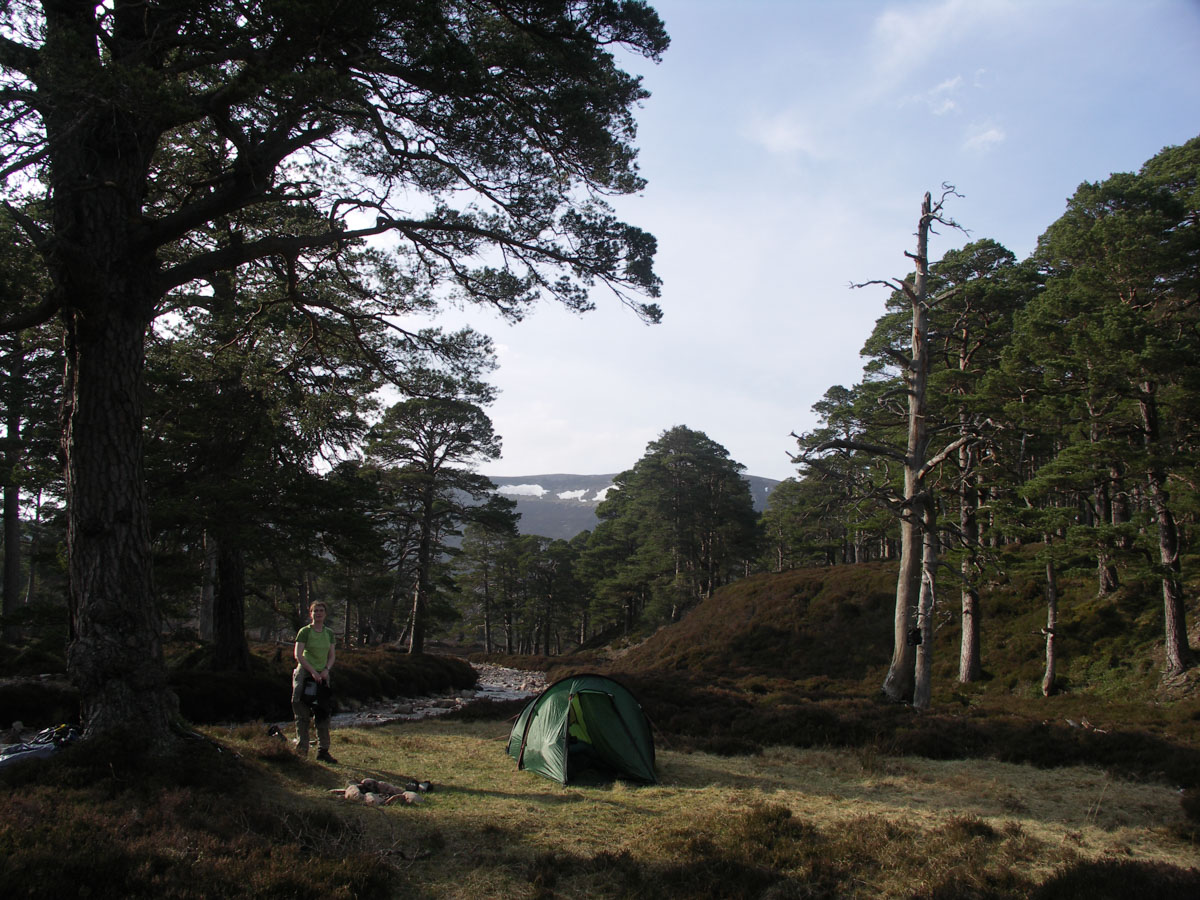 A pleasant evening, with a few hours to while away in peace and quiet before sunset.

Slept well, and had a leisurely breakfast before packing up and getting going.

Rather than a direct walk home we decided to head back over the Corbett Carn na Drochaide. Given that the camp site was at 450m elevation a Corbett is just a wee hill from here.

Headed east along a sketchy path on the north side of Quoich Water. 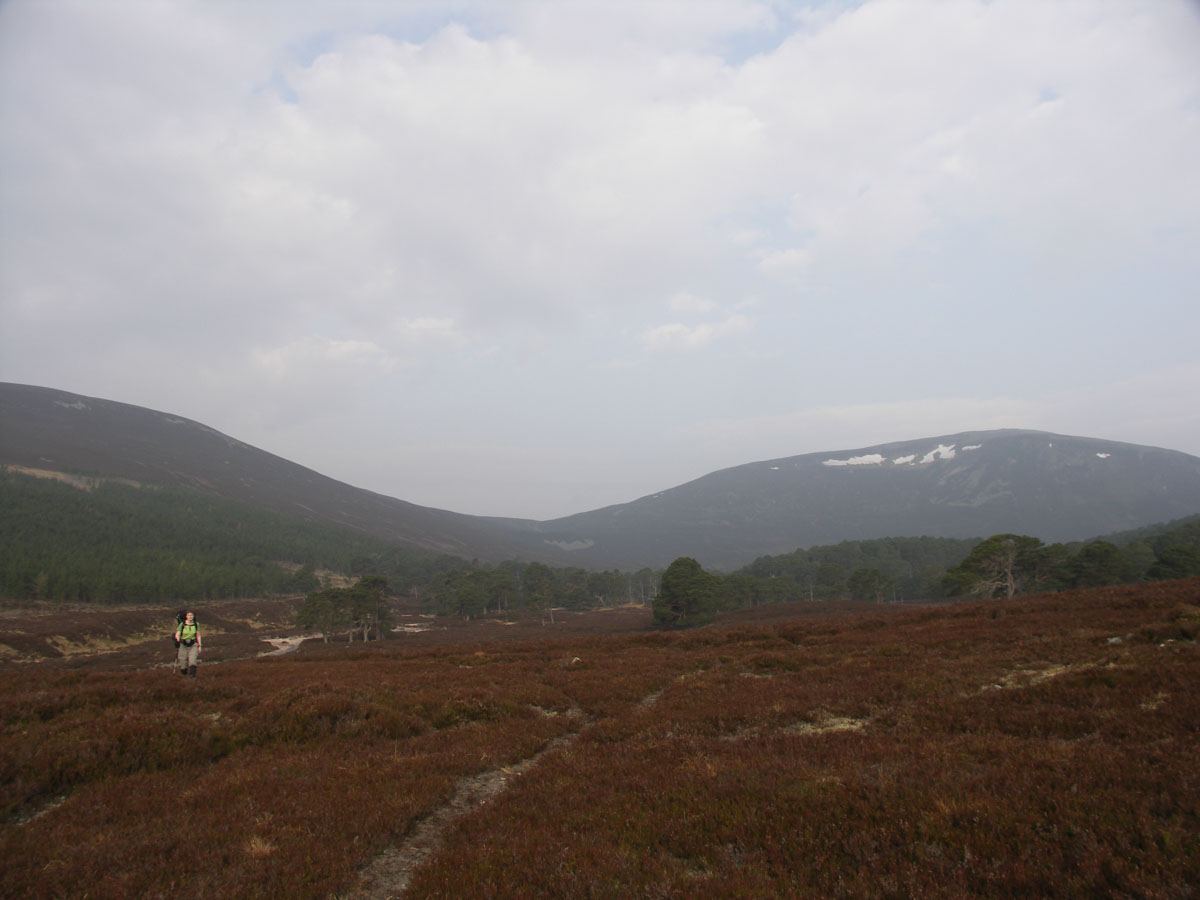 Forded the Quoich Water at NN 092 951 – marked on the map. Then headed uphill to ascend Carn Elrig Mor.

Once above the tree line the vegetation height drops and progress is easy.

Across the glen Beinn Bhreac and the yesterday’s ascent route is visible. 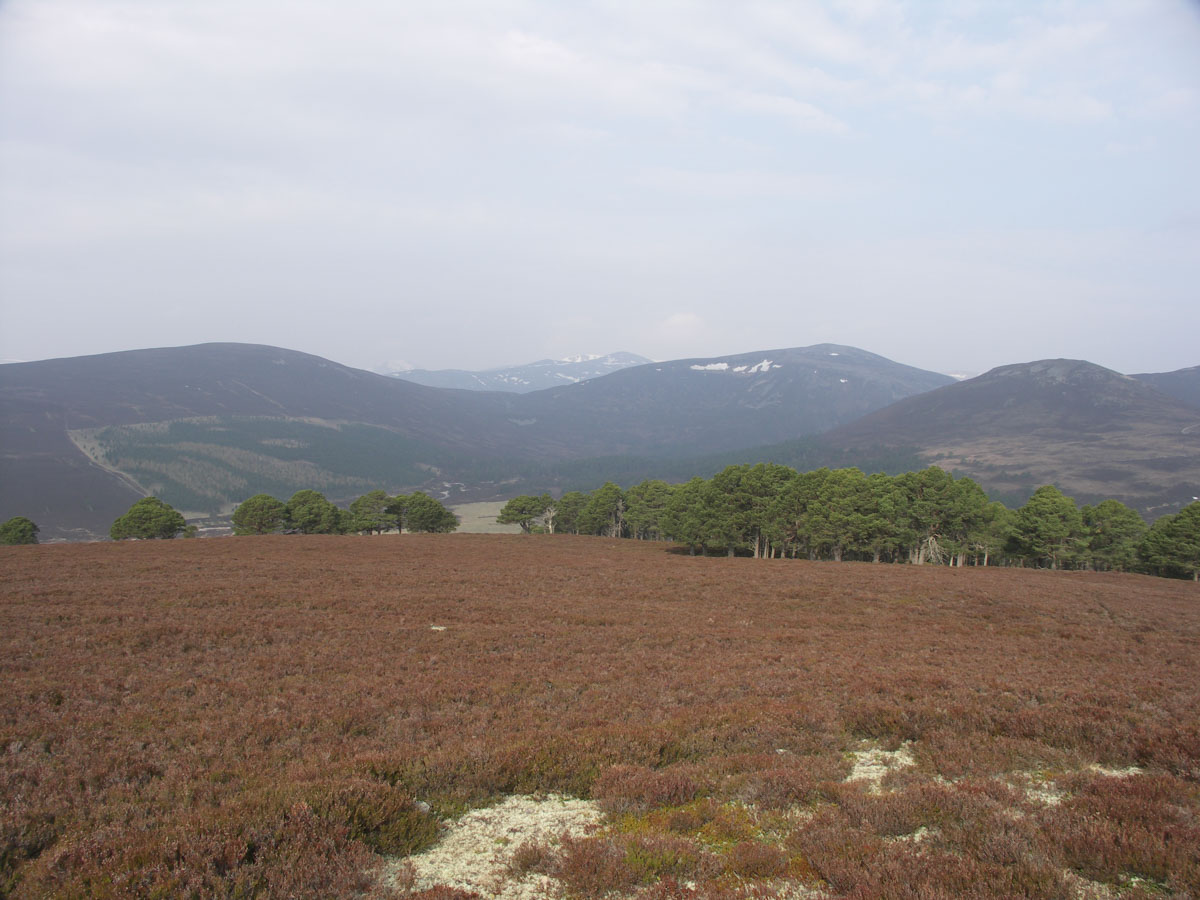 From Carn Elrig Mor there’s a small ascent to Carn na Criche – from here Beinn a Bhuird and parts of Ben Avon are visible, views still blunted by haze. 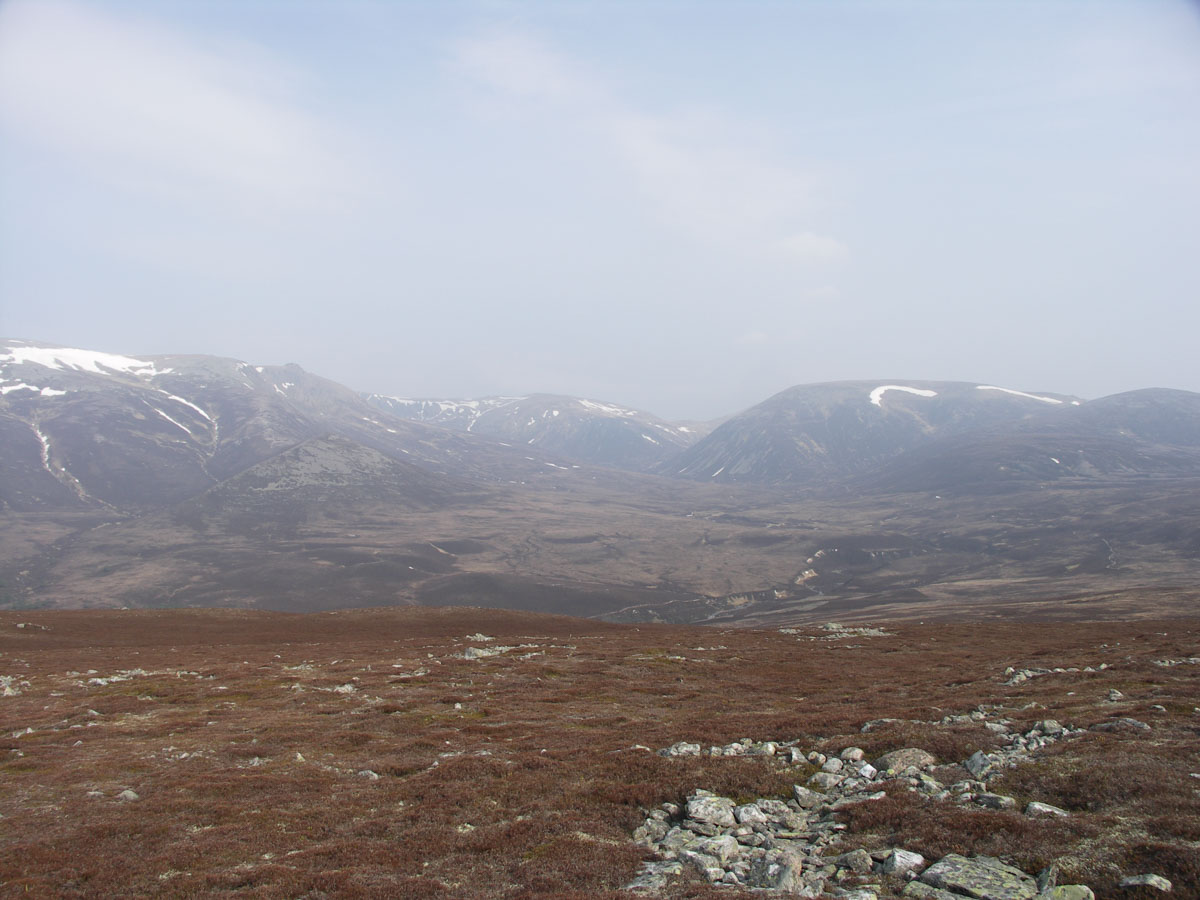 …and then on to Carn na Drochaide with our big packs. 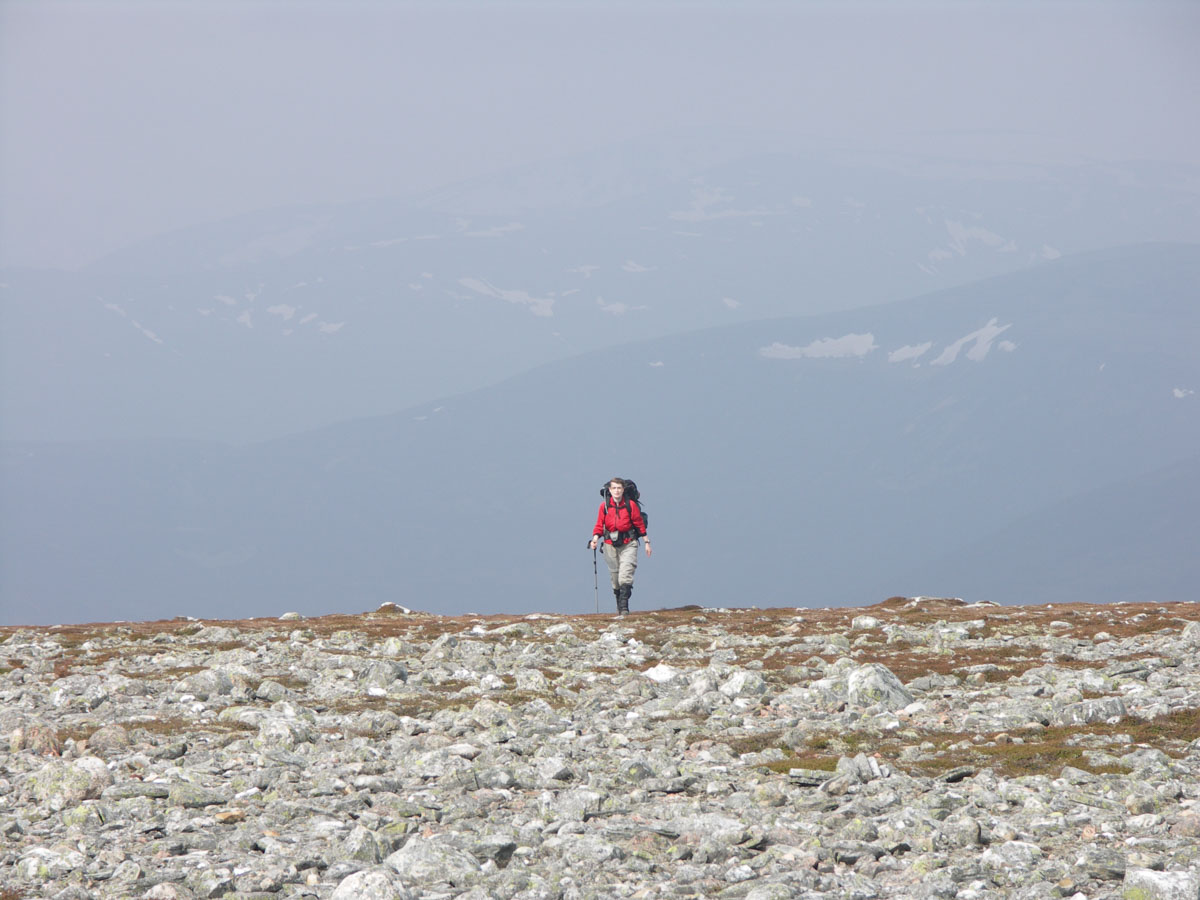 Carn na Drochaide is directly above the Linn of Quoich so we just dropped from there back to the car.

A nice wee trip – we really should camp low a bit more often.