We decided to head up the Munro at the east end of the Aonach Eagach ridge. As H had no wish to do the ridge, and getting from Am Bodach to Meall Dearg needs a significant scramble, we decided to head in from Loch Leven.

Parked near Caolasnacon and headed up Glen a Chaolais, between the Corbett Garbh Bheinn and meal Garbh.

There’s a track running the first km or so into the glen. 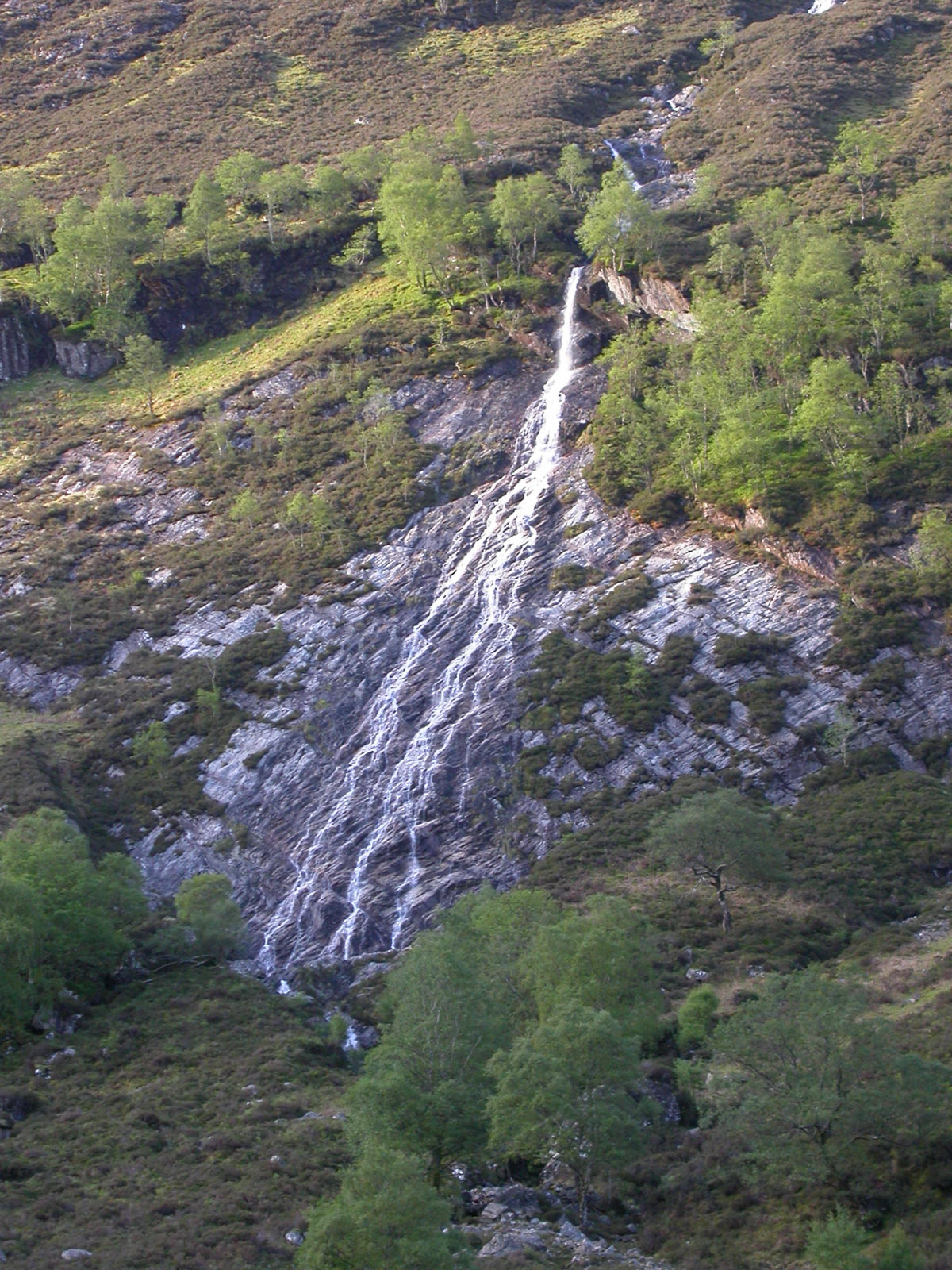 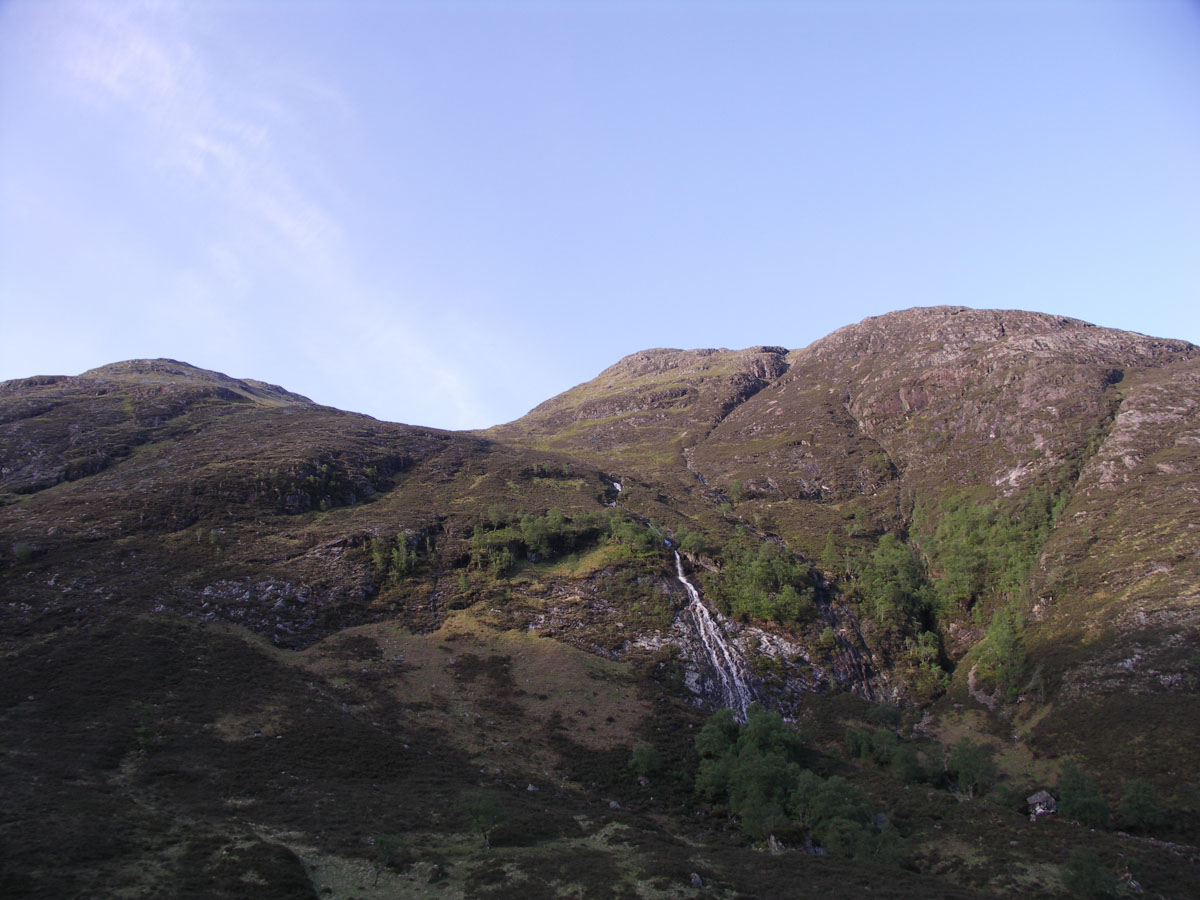 A northern approach is a shaded approach early in the day – the sunlight was lighting up Mam na Gualainn across Loch Leven. 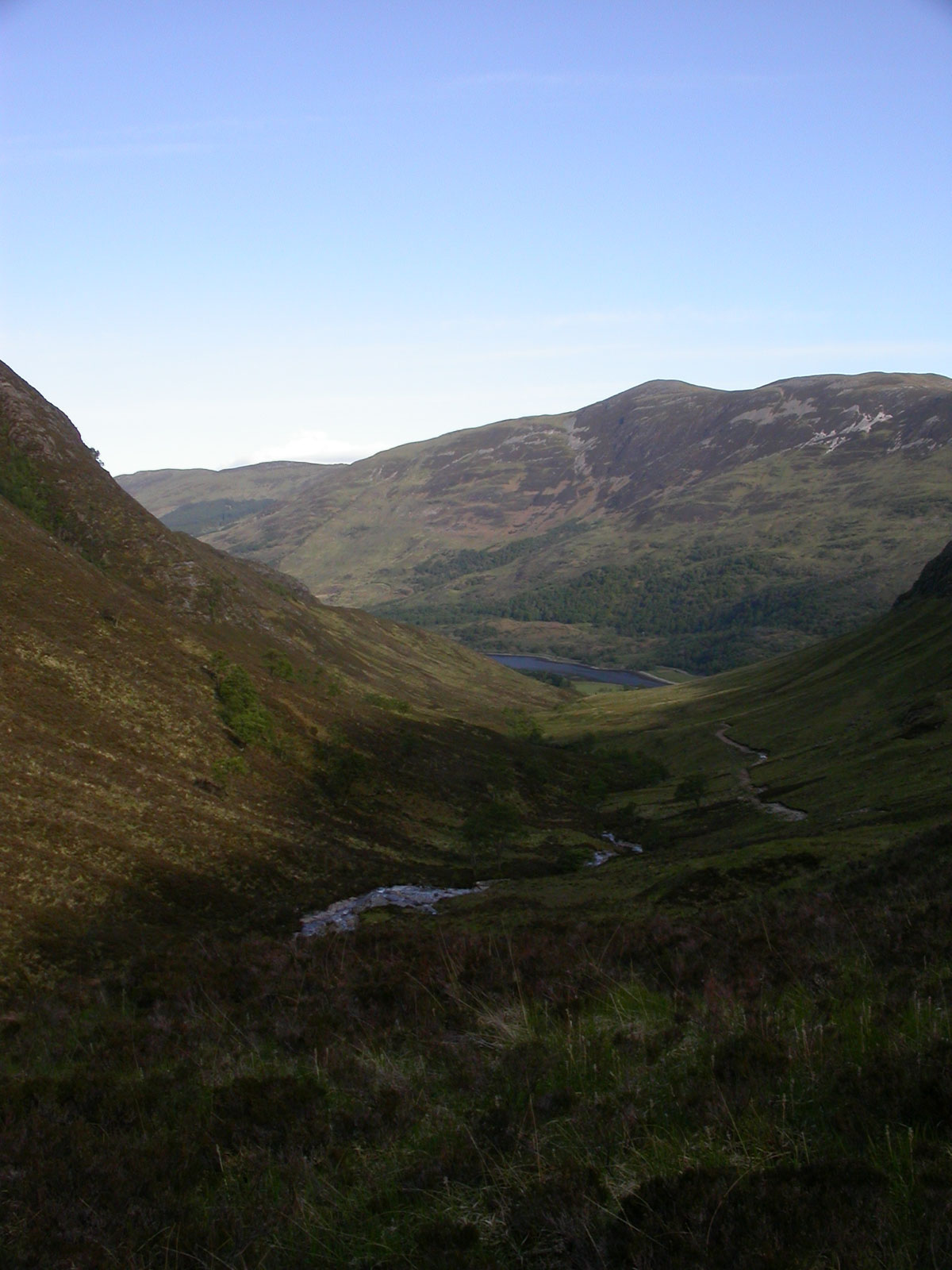 The sun soon crested the hill – it rises fast in May. Ahead of us the Eagach ridge looks entertaining. 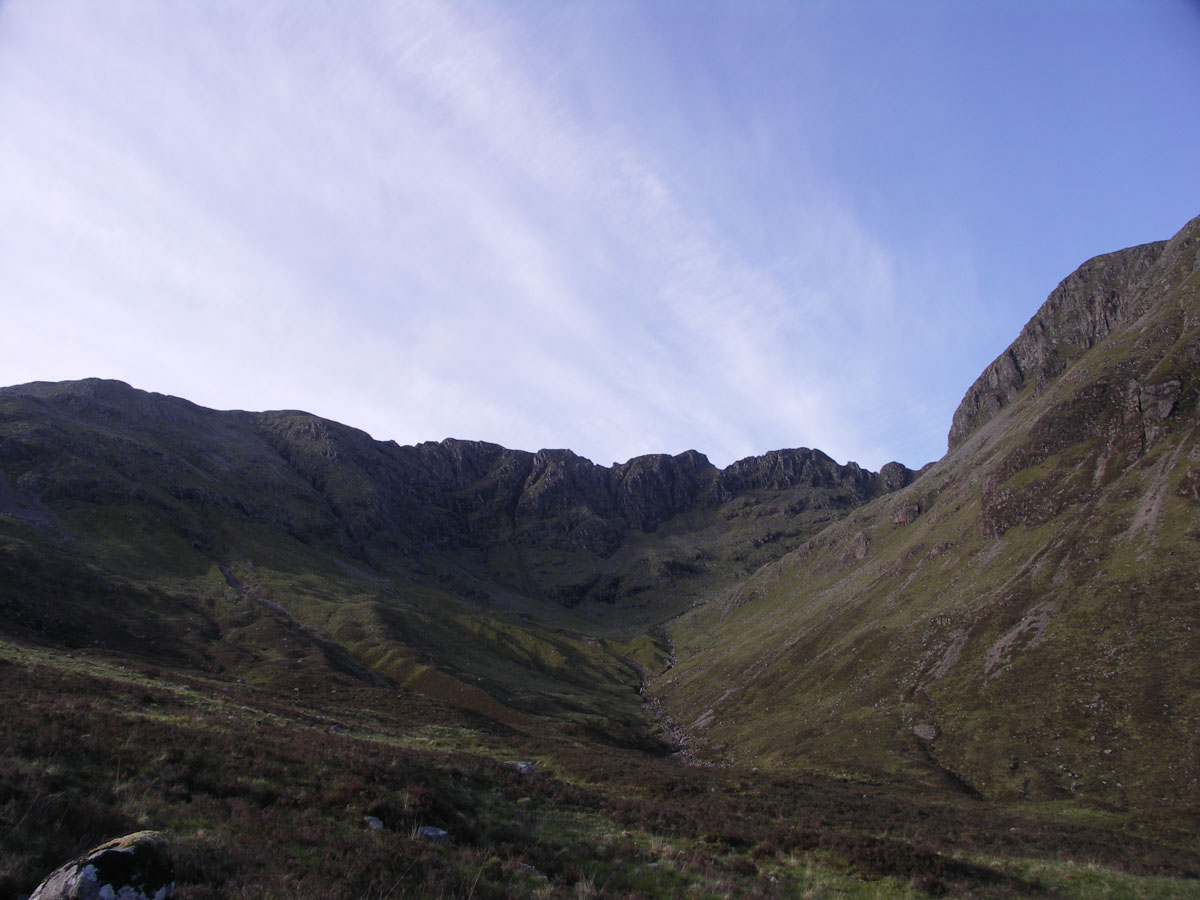 We ascended out of Glen a Chaolais via its east flank to the bealach between Garbh Bheinn and Meall Dearg. From there the NE ridge of Meall Dearg is a simple enough ascent.

As you ascend the views to the NE open up to include Blackwater Reservoir and Loch Eilde Mor. 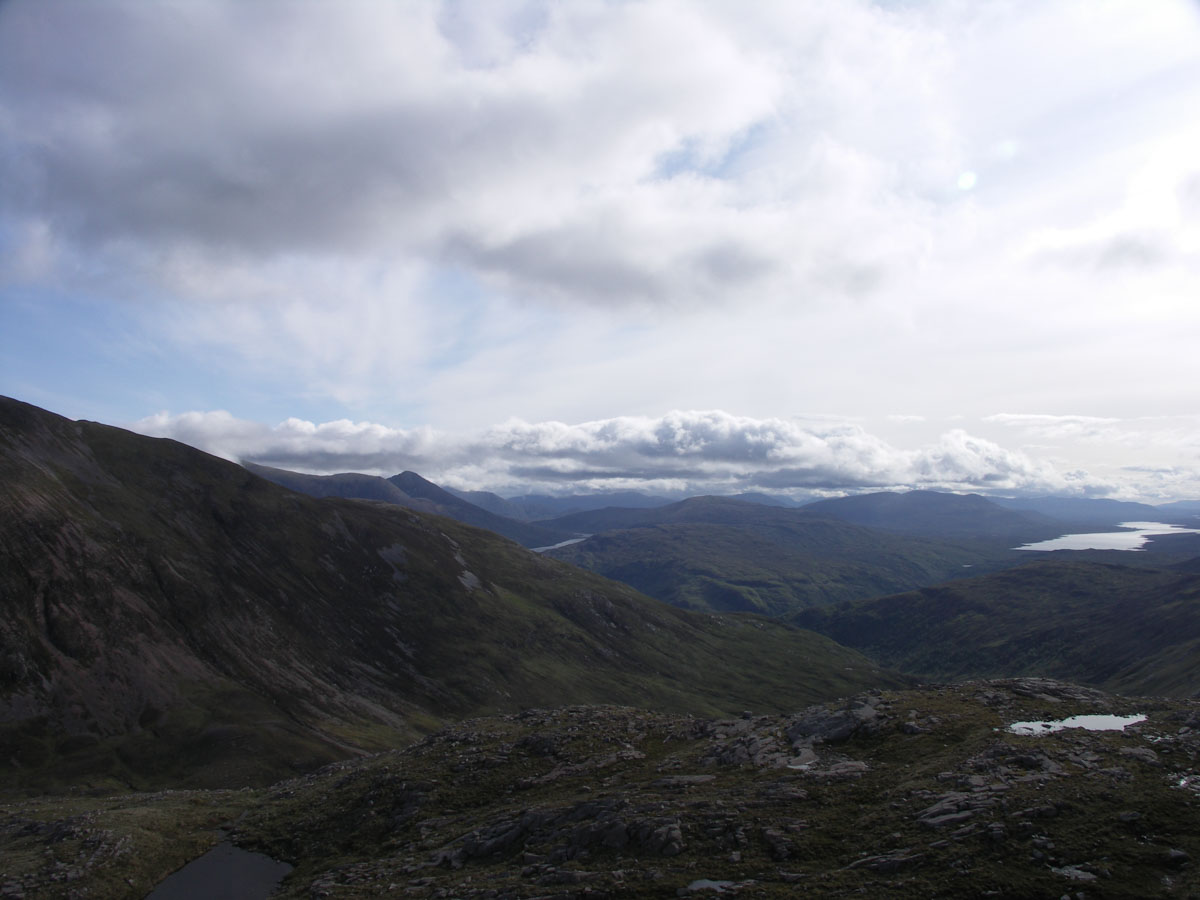 To the north the Mamores Stob Ban, Sgurr a Mhaim and Am Bodach provide the foreground for Ben Nevis (in cloud).

N to the Ben from nearr top 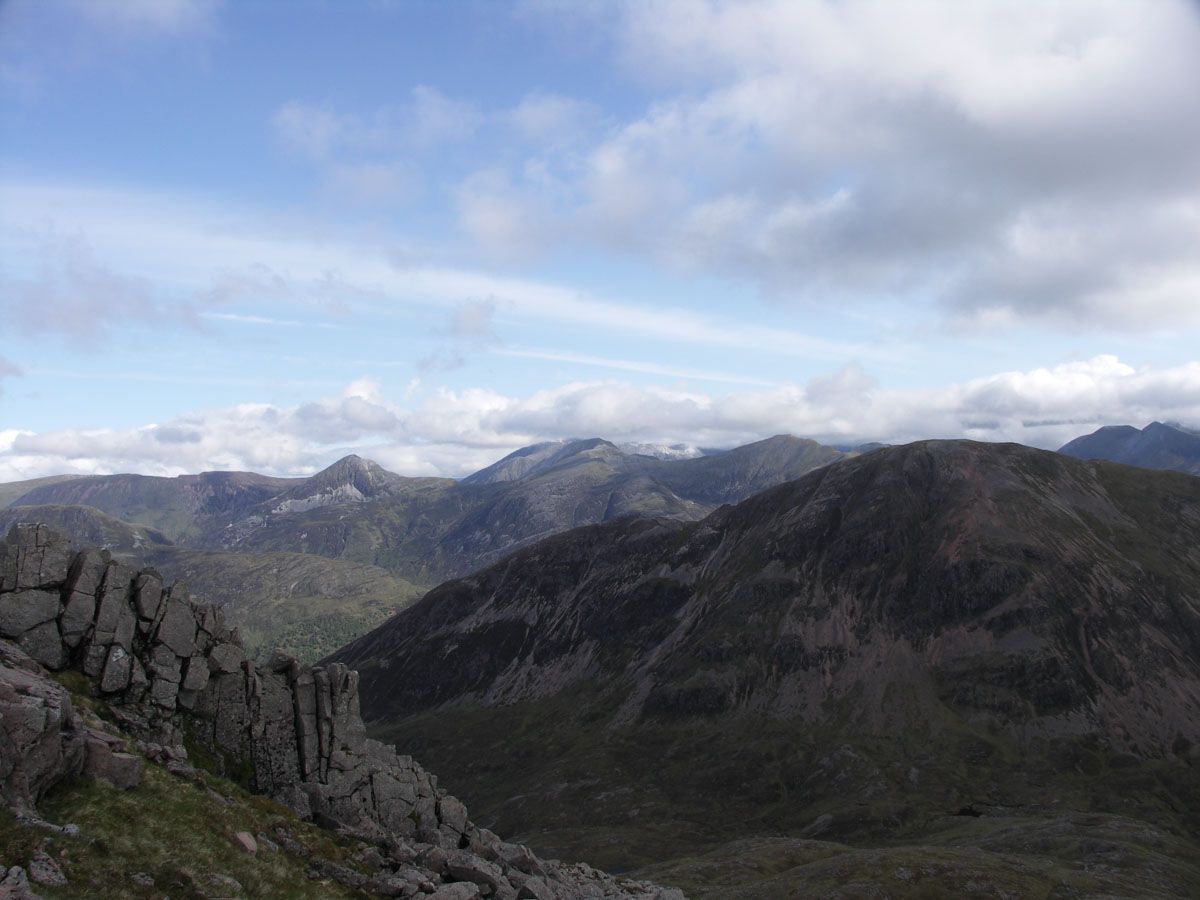 Approaching the munro summit the Eagach ridge to the west is seriously serrated.

Eagach ridge from near top 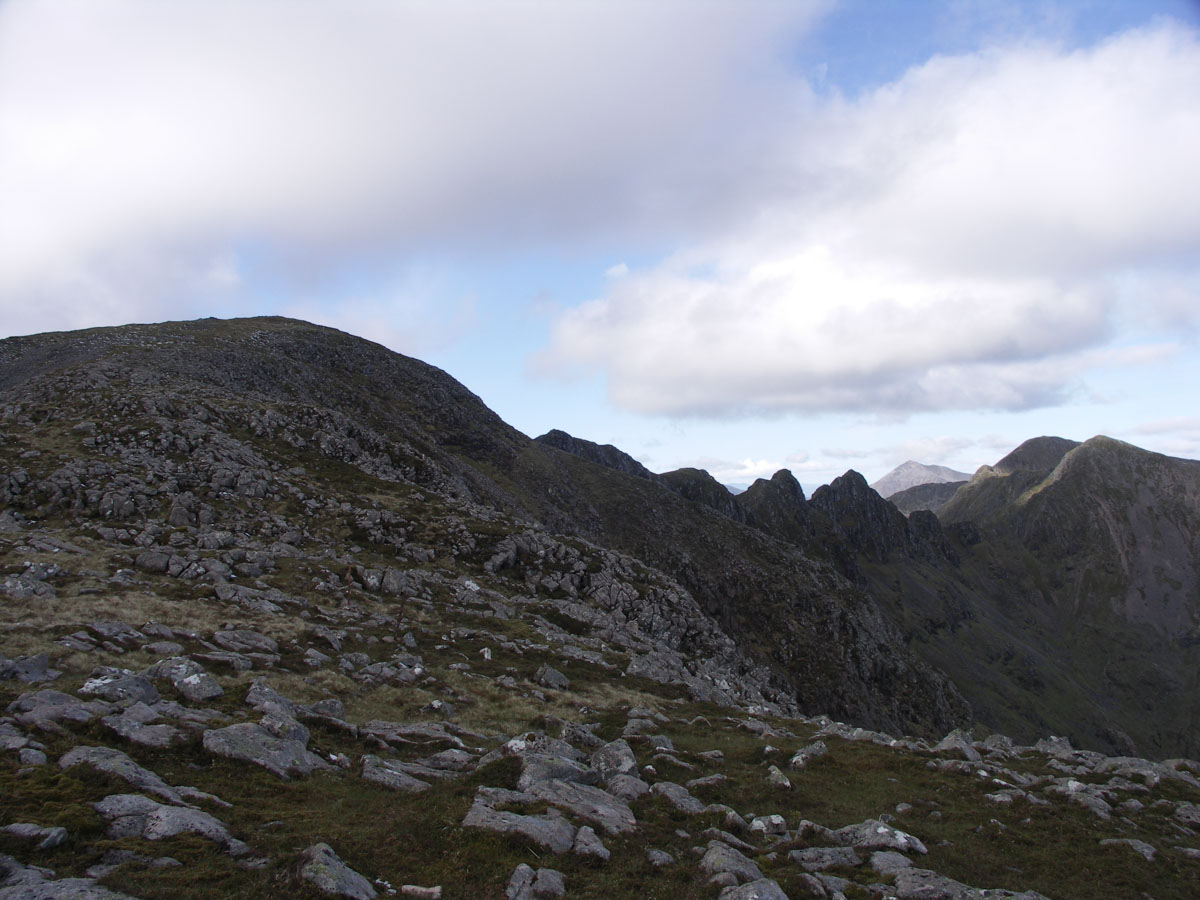 There were a few cloudy hills out past the eastern Mamores. This munro is quite a good viewpoint on a clear day.

Blackwater from near top 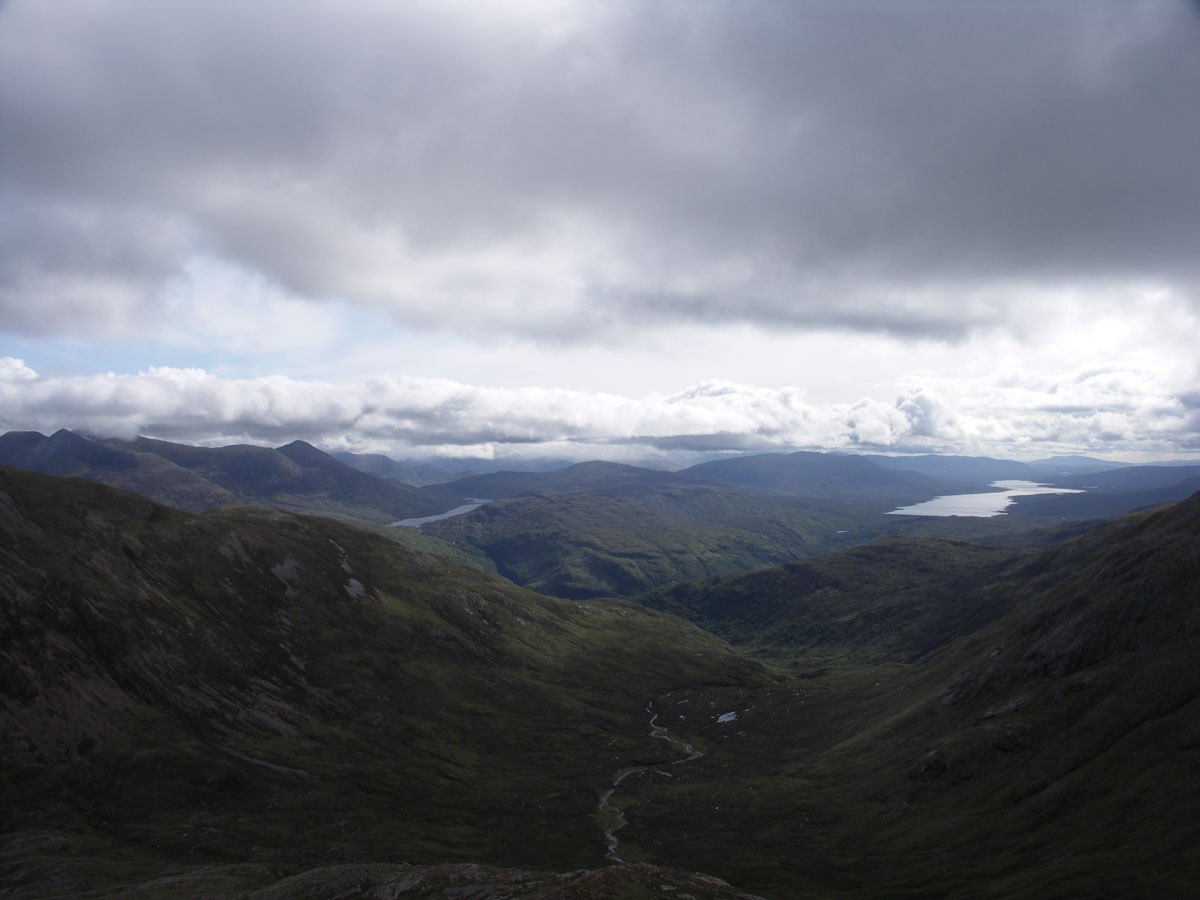 Once you’re on the munro you’re above Garbh Bheinn and the whole Mamores range is in view (cloud allowing).

Mamores and Nevis from Meall Dearg 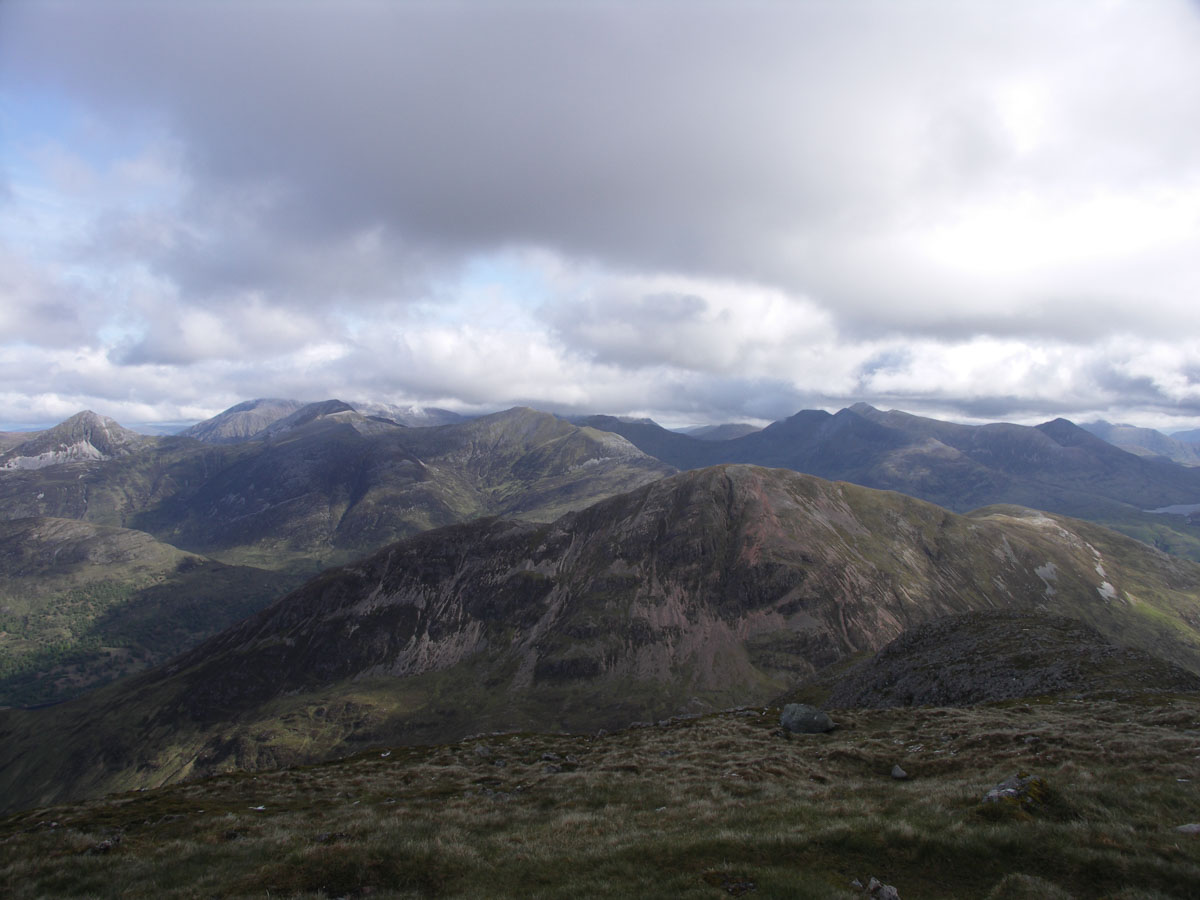 ….and approaching from the north the fabulous Bidean nam bian is a visual treat concealed from the approach. 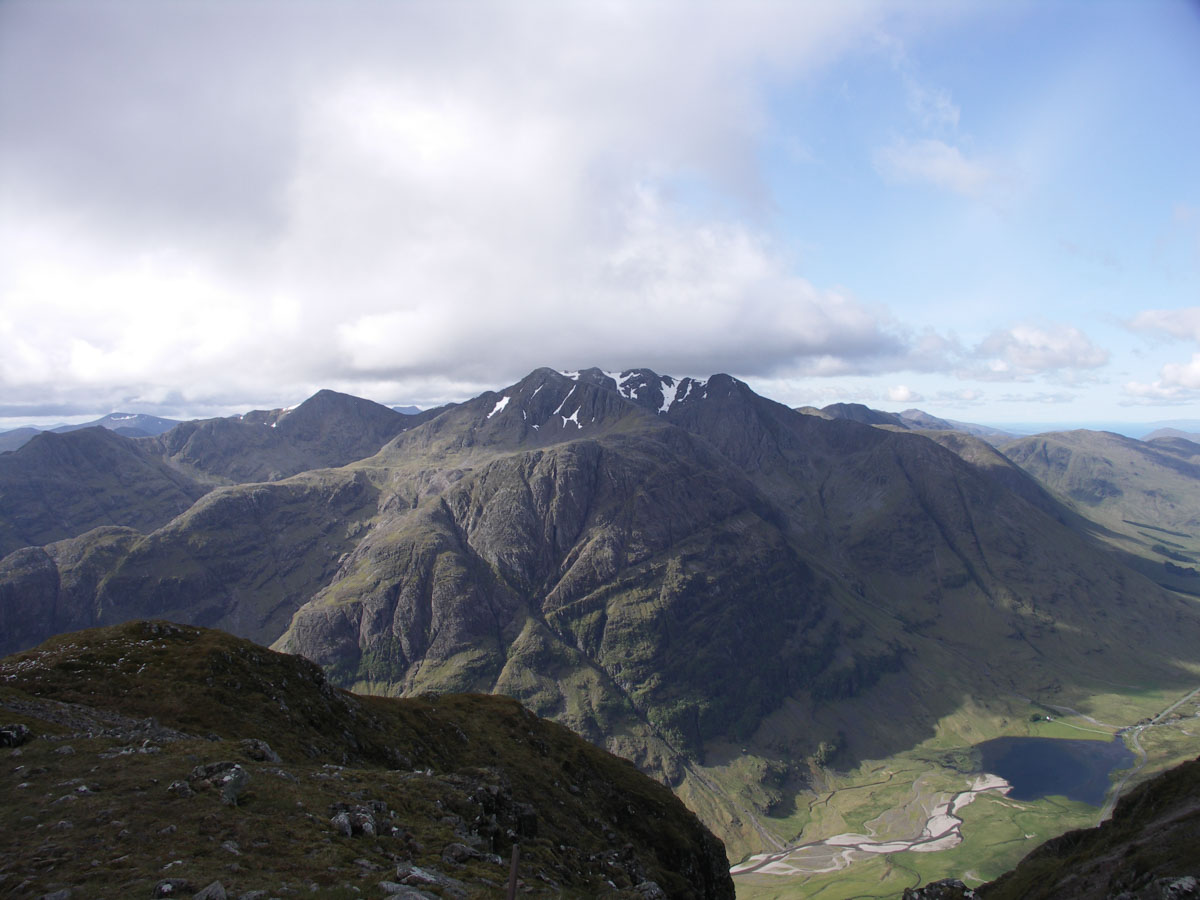 We were irked by a persistent cloud between us and the sun – the ridge never did get properly sunlit while we were on the top. Quite good air clarity though – further out Ben More on Mull and Beinn Resipol in Sunart were easily identifiable.

Ridge and beyond from Meall Dearg 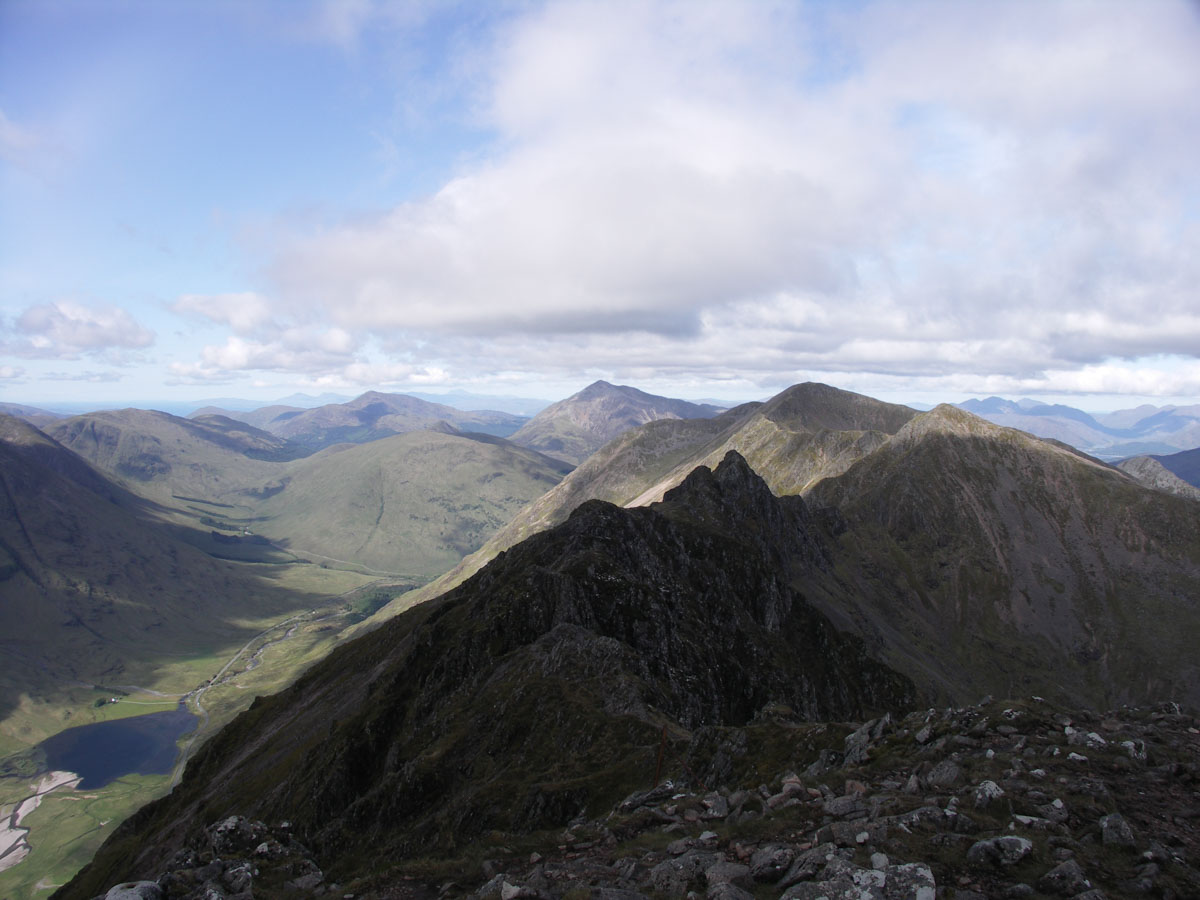 Stayed awhile on the top – the clouds were getting a little more confluent and the odd shower was pushing through. Returned to the car by the route of ascent.

Loch Eilde Mor from near top 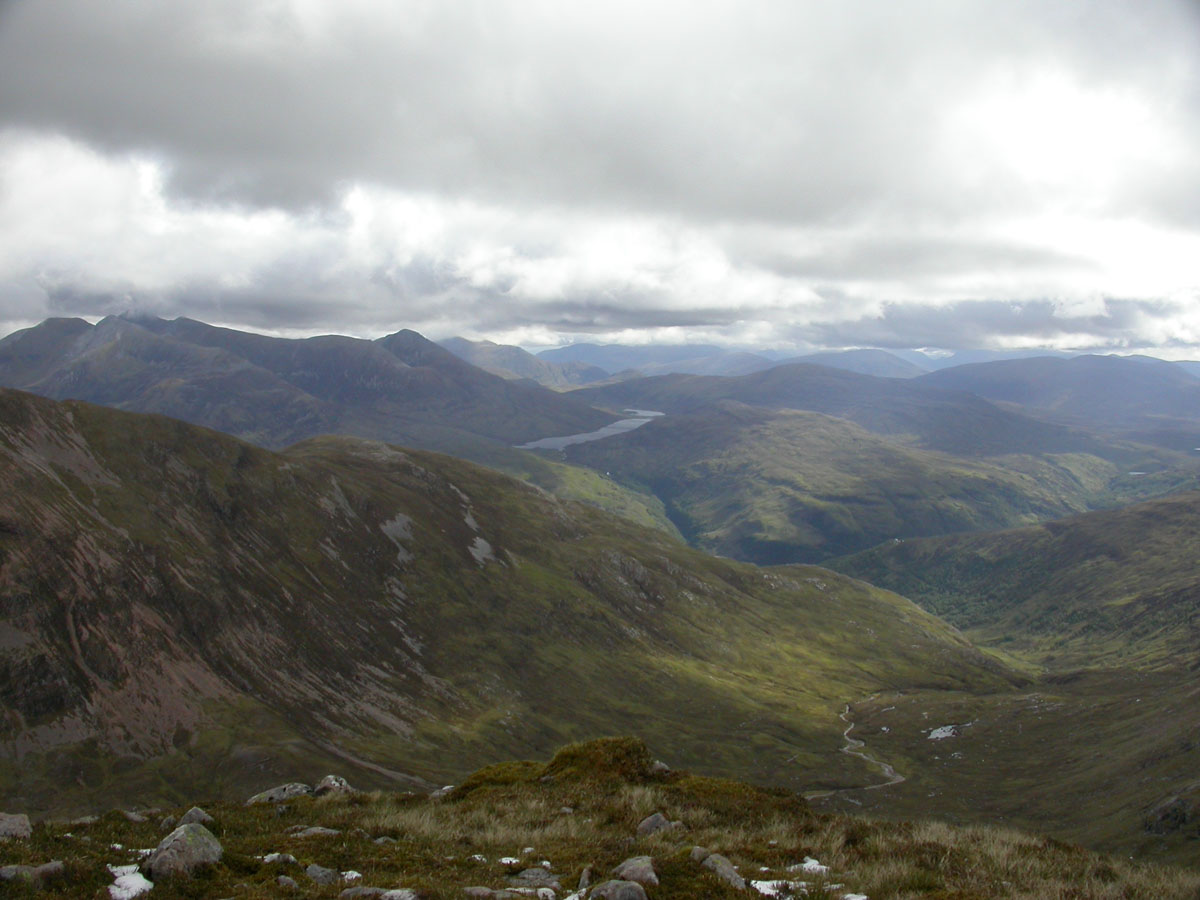 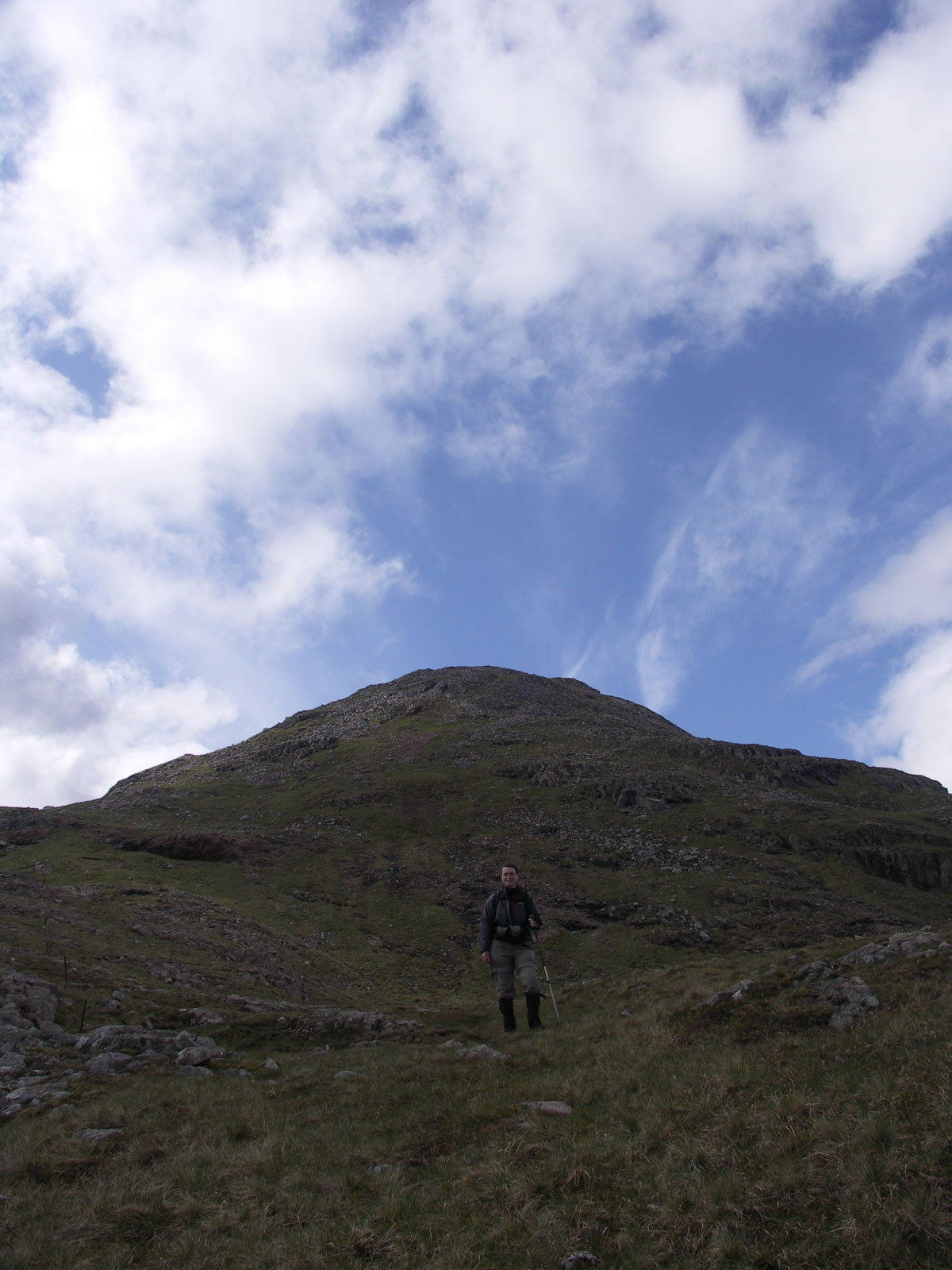 Occasional sunshine was still available – quite a pleasant day really. 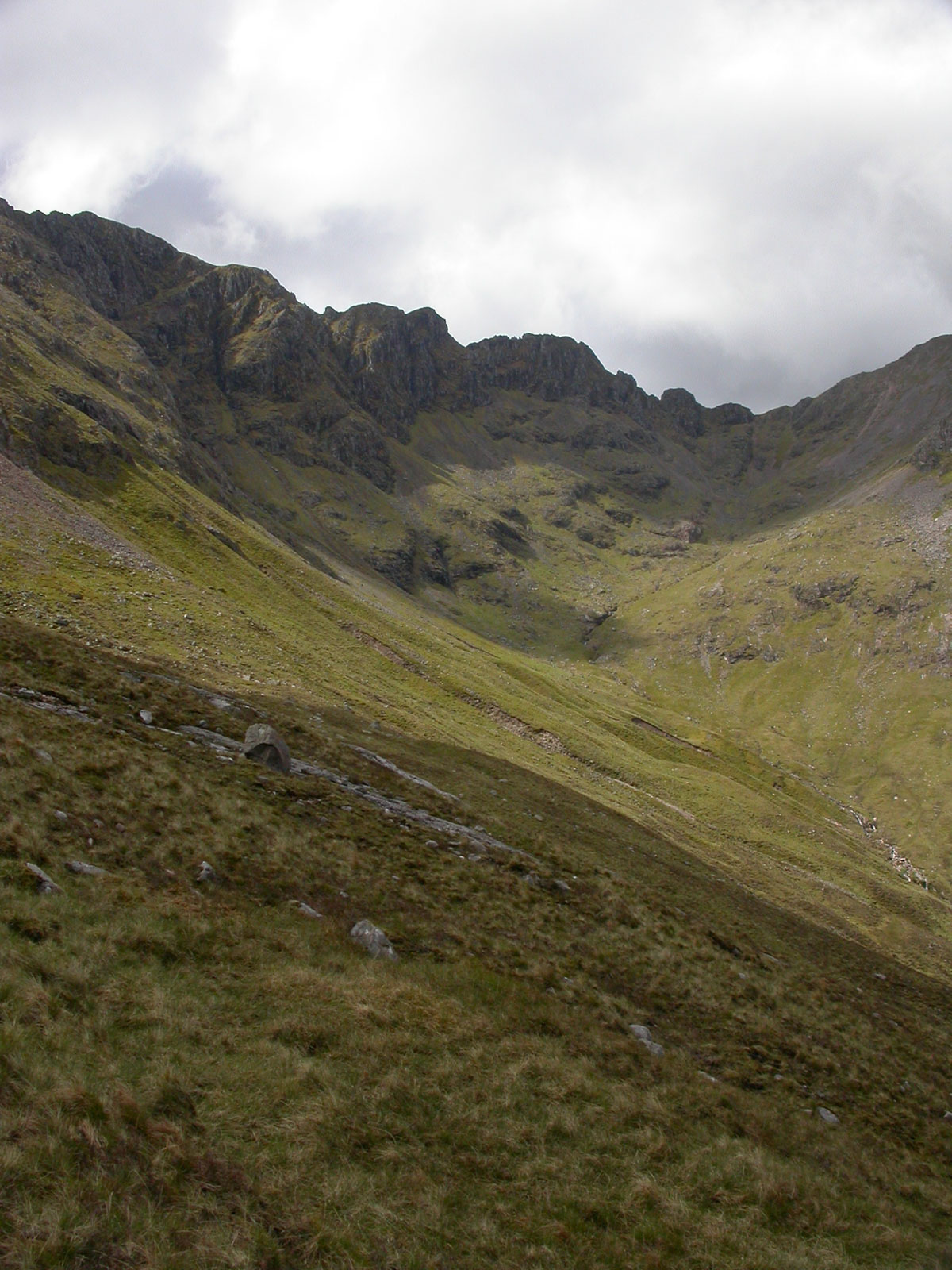 Not a walk for dedicated scramblers – they’d be doing the Aonach Eagach traverse. It is, however quite a decent walk and quite a quiet one too. Probably worth a repeat visit one of these days.