By summer 2007 we’d visited almost all the munros, other than a few in Knoydart and Fisherfield plus most of the Cuillin.

An odd residual was Beinn na Lap – although it’s a dawdle from Corrour we’ve never liked walking to a timetable, so nipping up and down between trains was not an attractive option.

After a bit of map work we decided to get the train from Tulloch Station to Corrour and walk back.

Up early and drove to Fersit, then walked the 5km up the road to Tulloch Station – there were nice reflections in An Dubh Lochan. 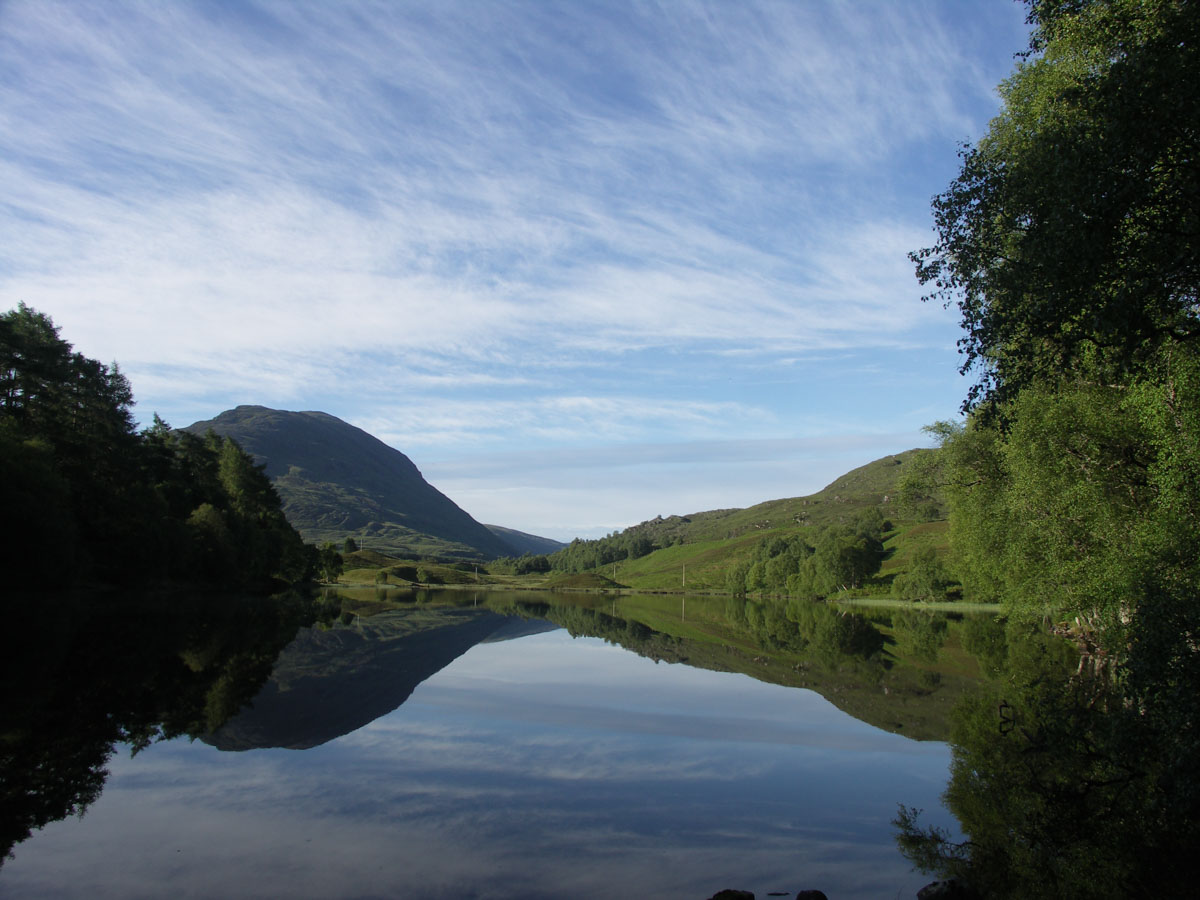 Caught the early morning Mallaig-Glasgow service for the 16km journey down Loch Treig to Corrour Station. We’d only been here once before – on an aborted camping trip visiting Carn Dearg and Sgor Ghaibhre. A long, cold wait for the train south had reinforced our dislike of meshing walks with public transport.

It was a pleasant morning – Loch Ossian is a lovely place. 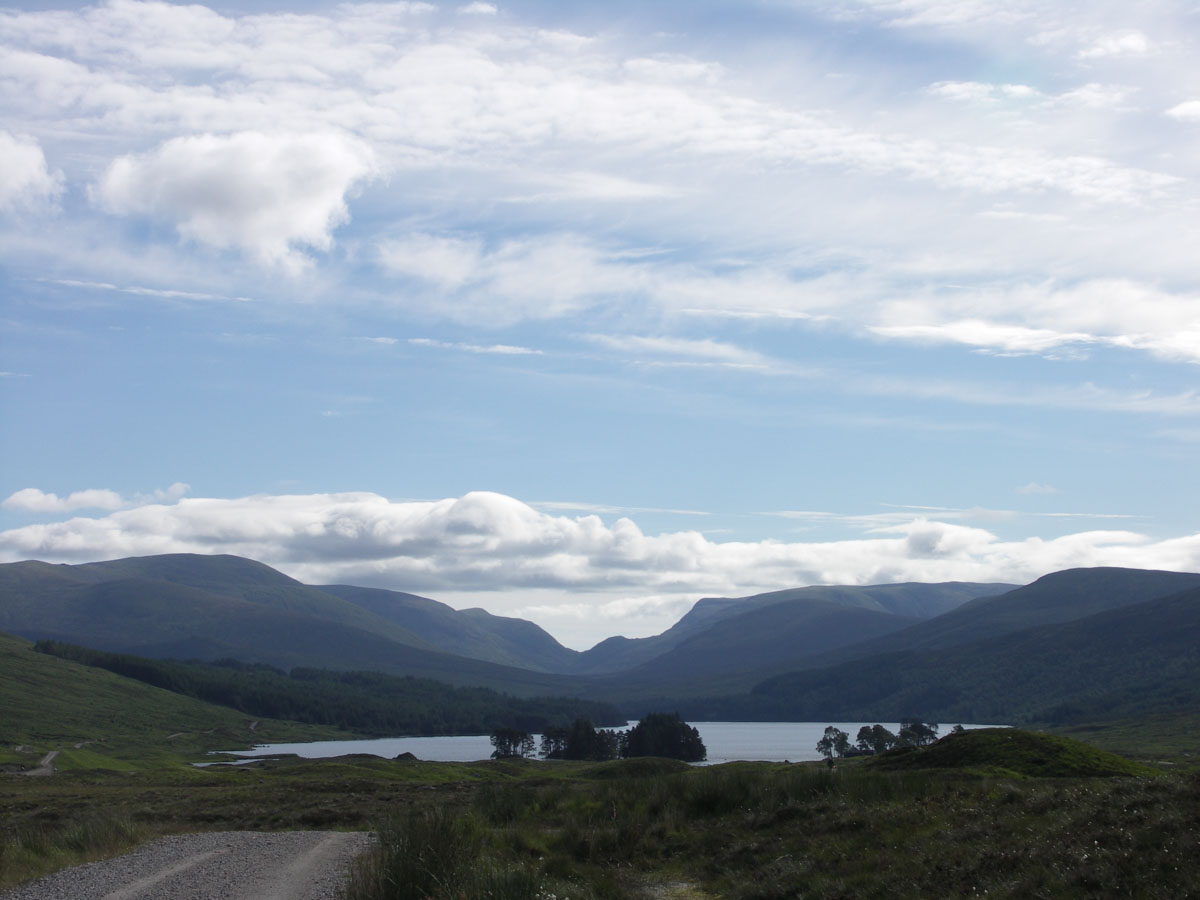 Headed along the track towards Loch Ossian from Corrour – the fine Corbett Leum Ulliem forms the background. 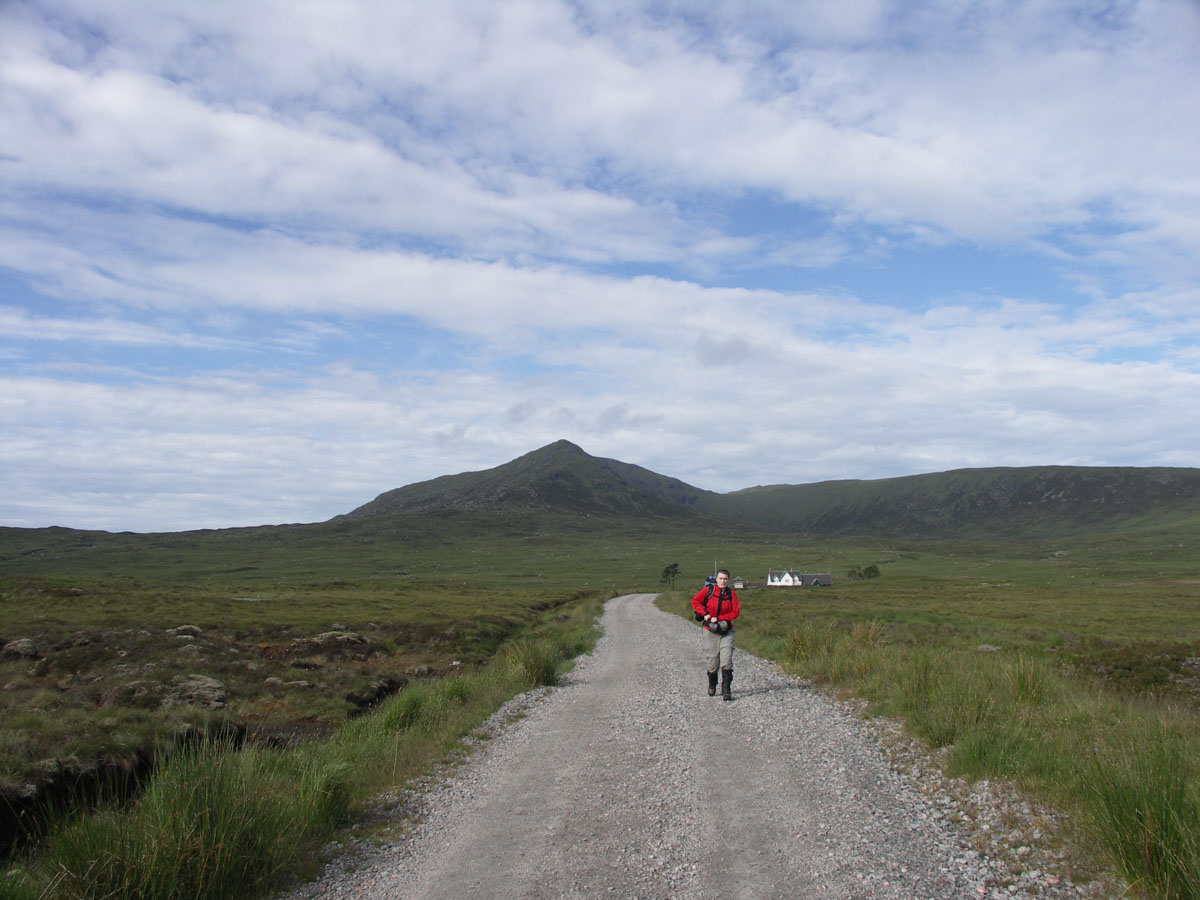 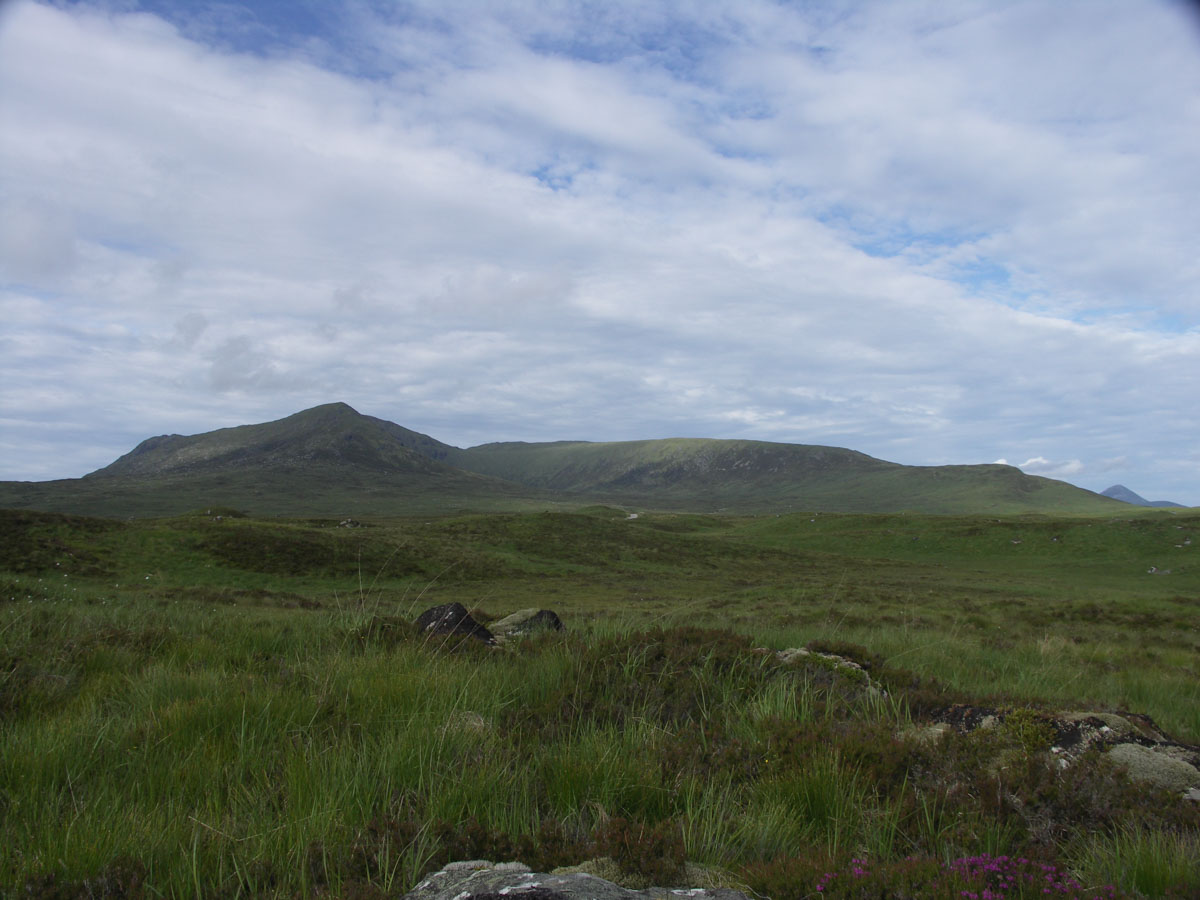 Beinn na Lap is a very simple ascent, and given Corrour Stations 400m elevation it’s only a 500m climb.

With elevation the view opens up west to the Lochaber hills and Glen Coe. 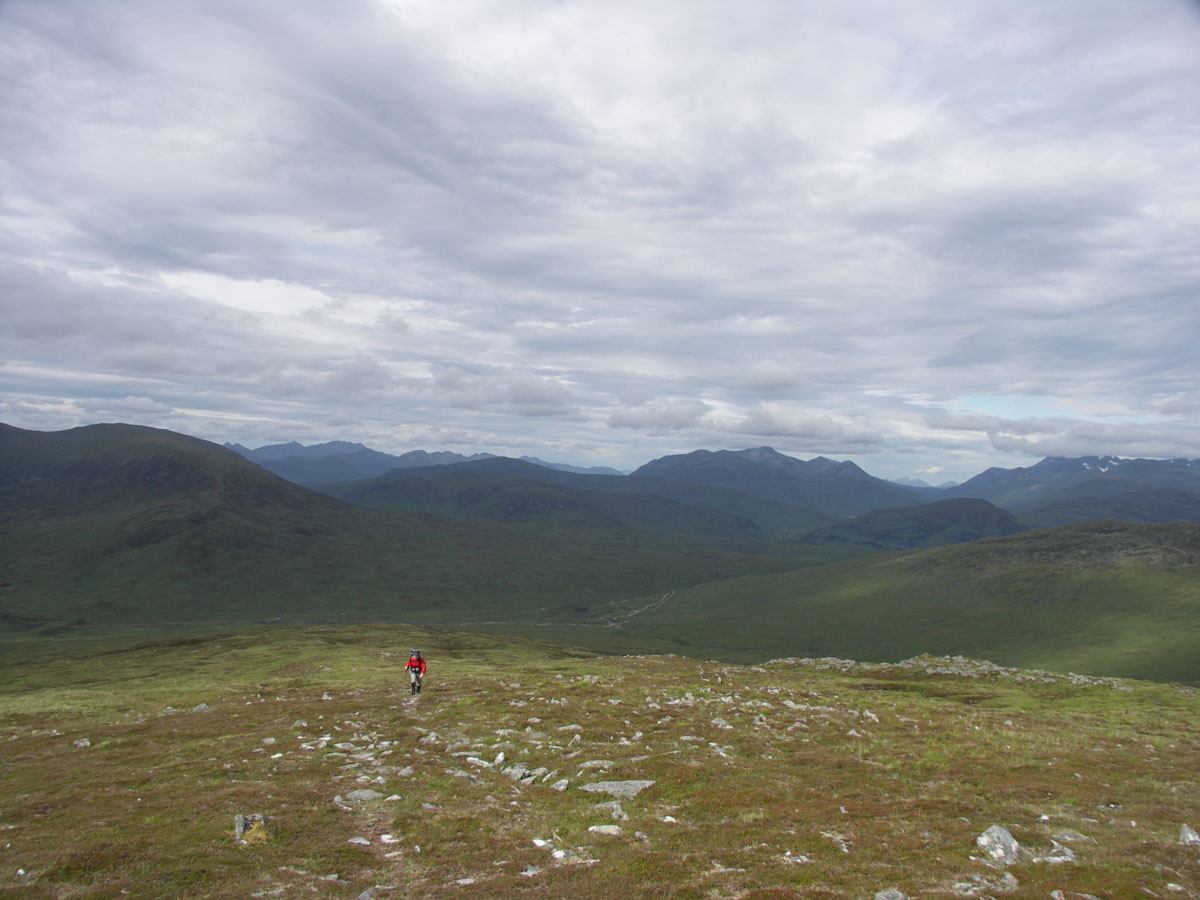 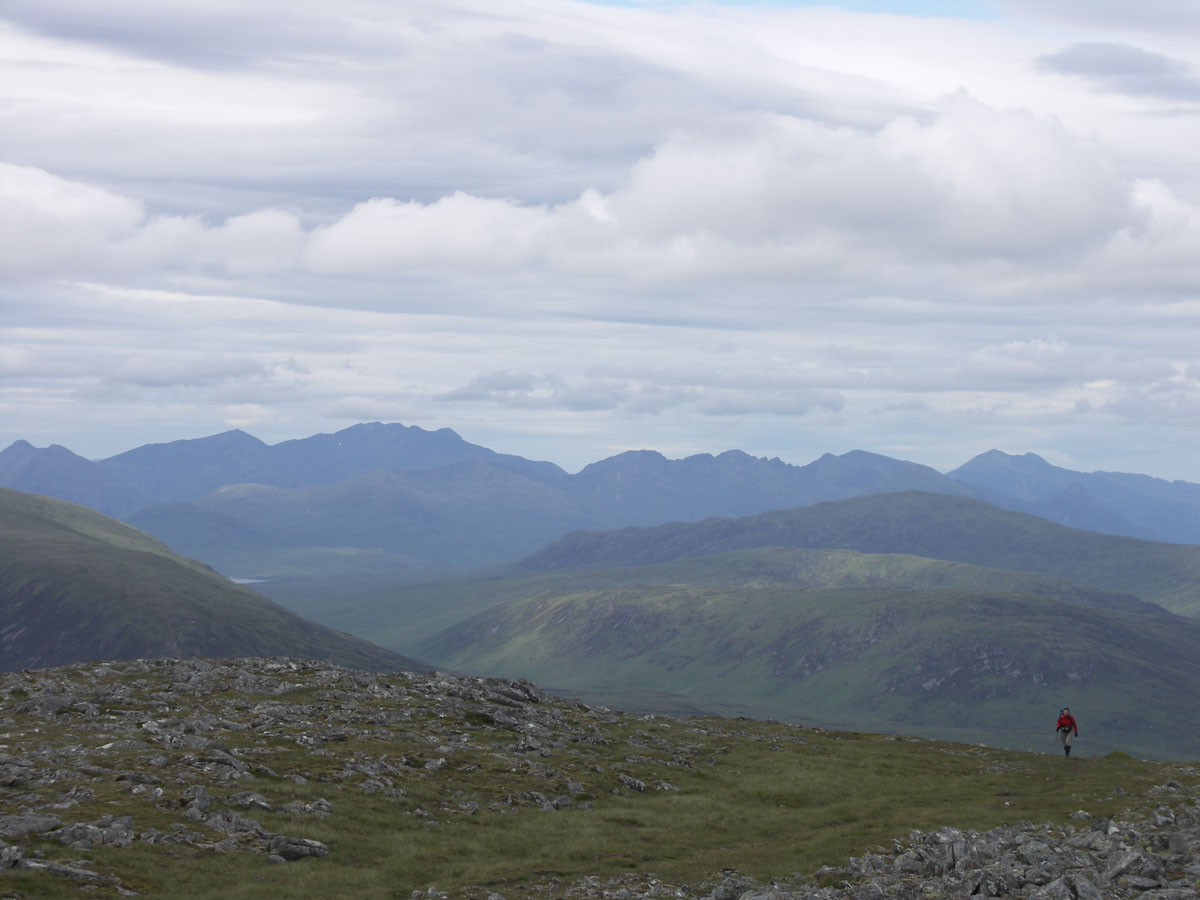 It doesn’t take too long to reach the stony summit. It’s quite a fine vista. 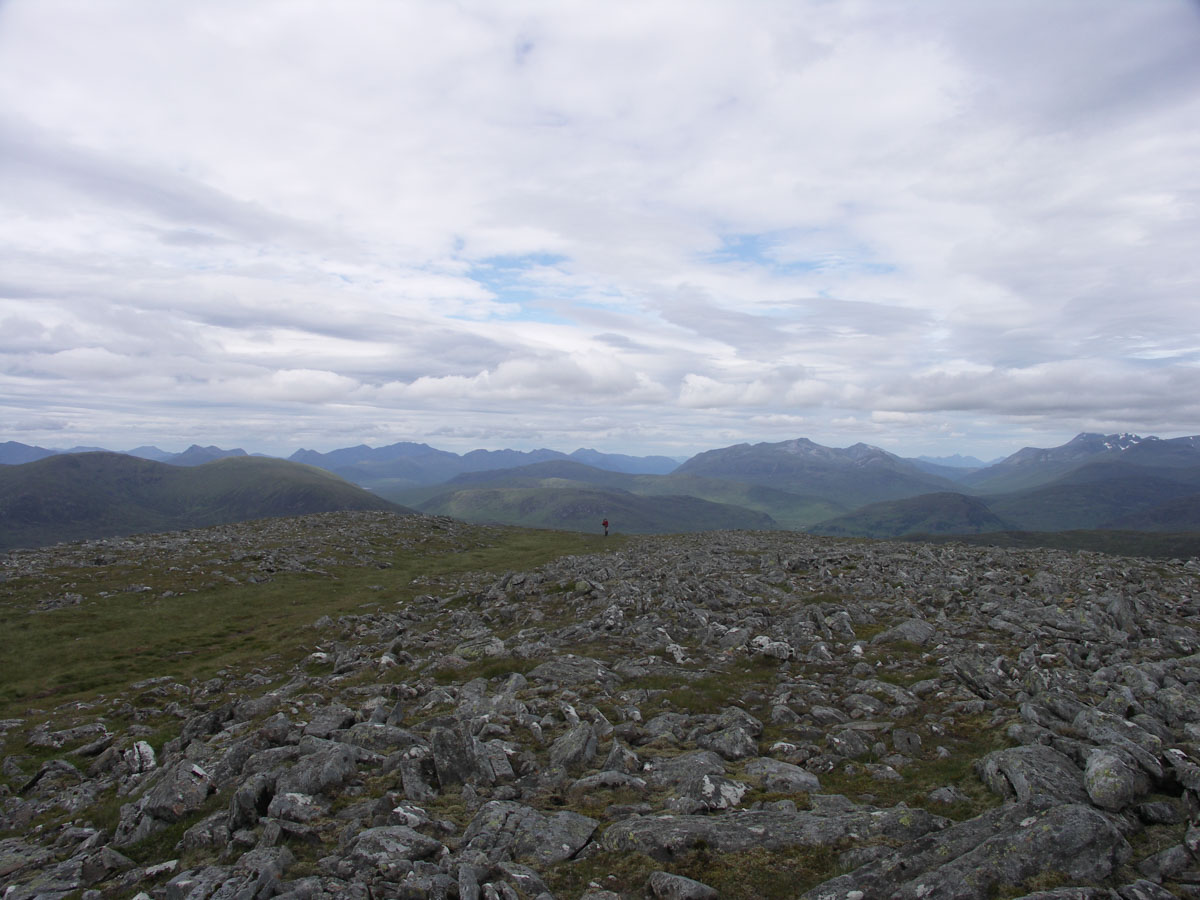 Familiar shapes of hills everywhere you look. The ridges of Ben Nevis and the Aonachs form the northern side of Glen Nevis to the west. The southern flank is formed by the Mamores. Throught the gap is Sgurr Dhomhnuill in Ardgour.

Along Glen Nevis from summit 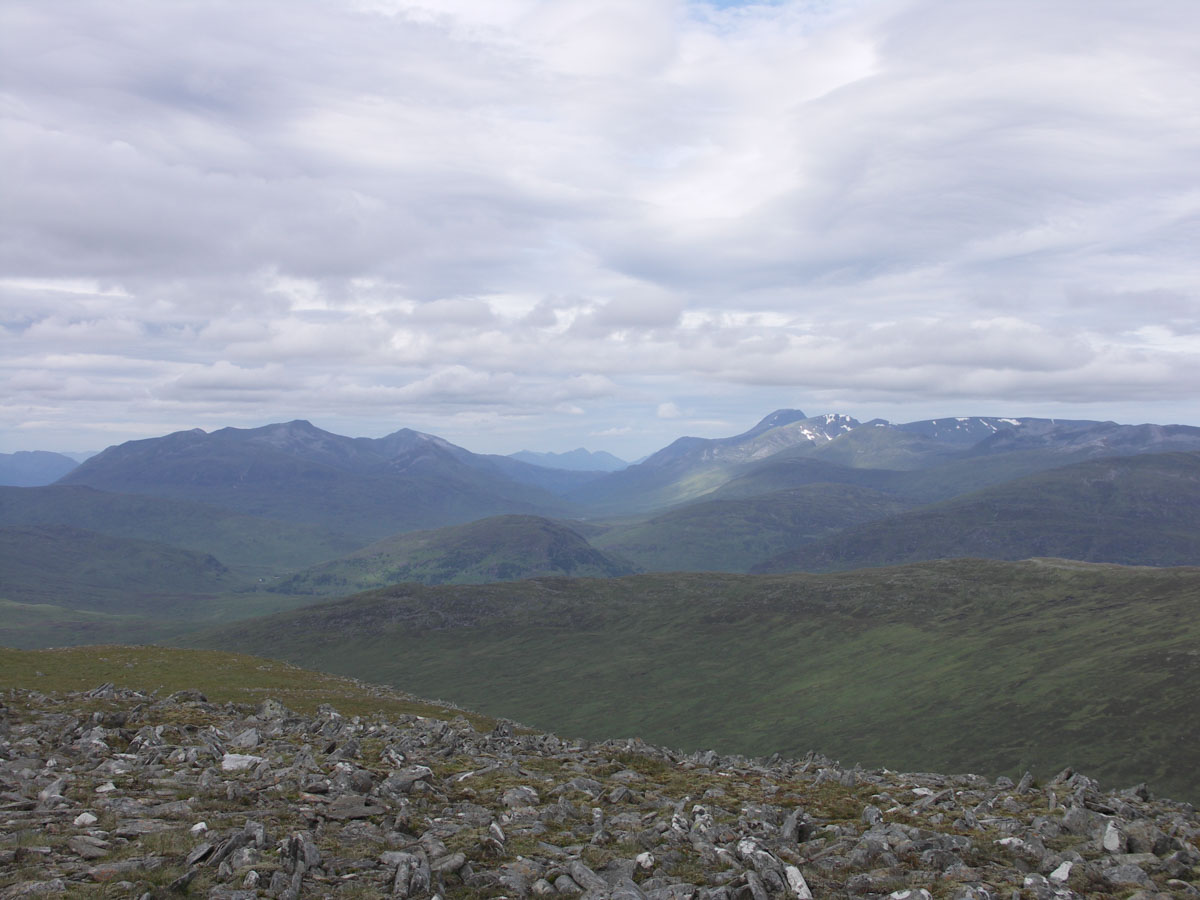 The shape of the Ben is a little less familiar from this angle. 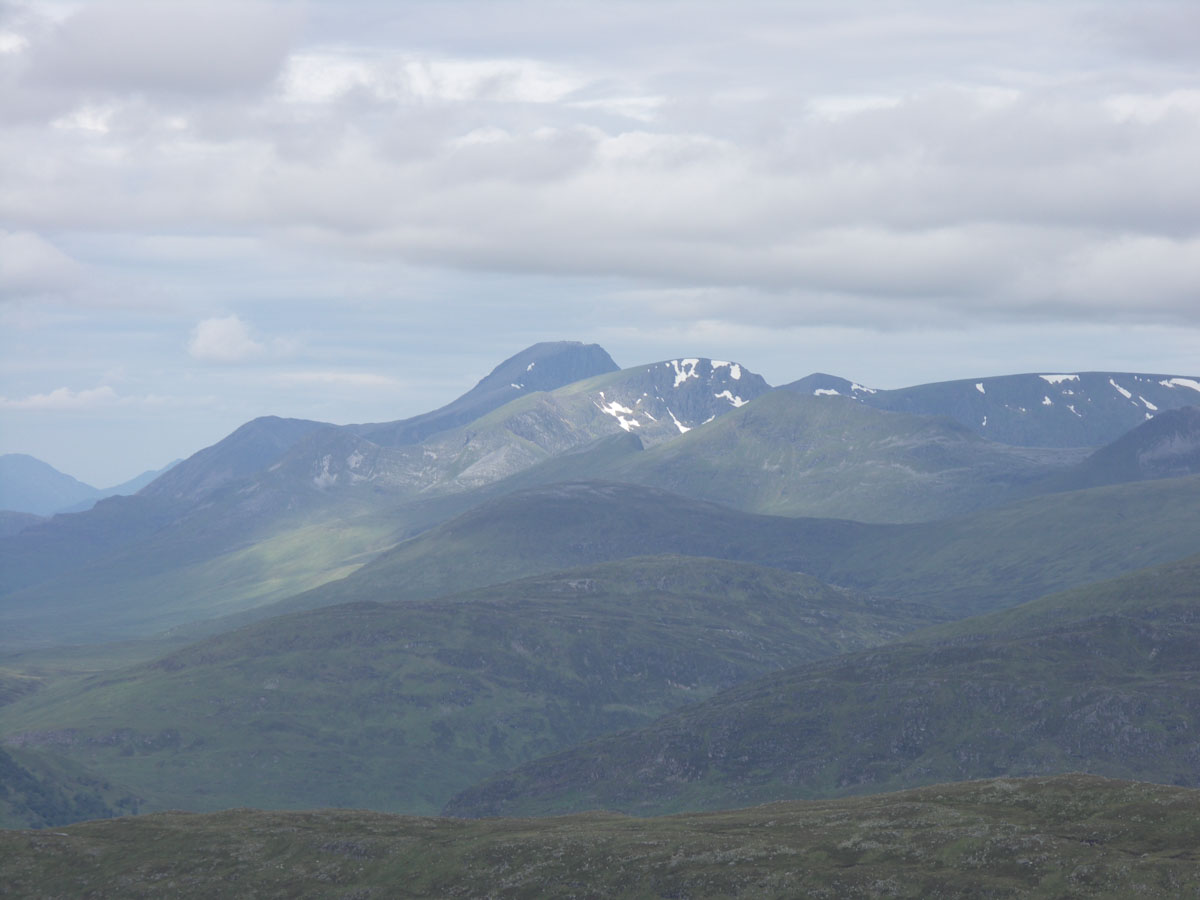 The Ben Alder group is a bulky bunch – tucked away from roads it has a remote fascination. 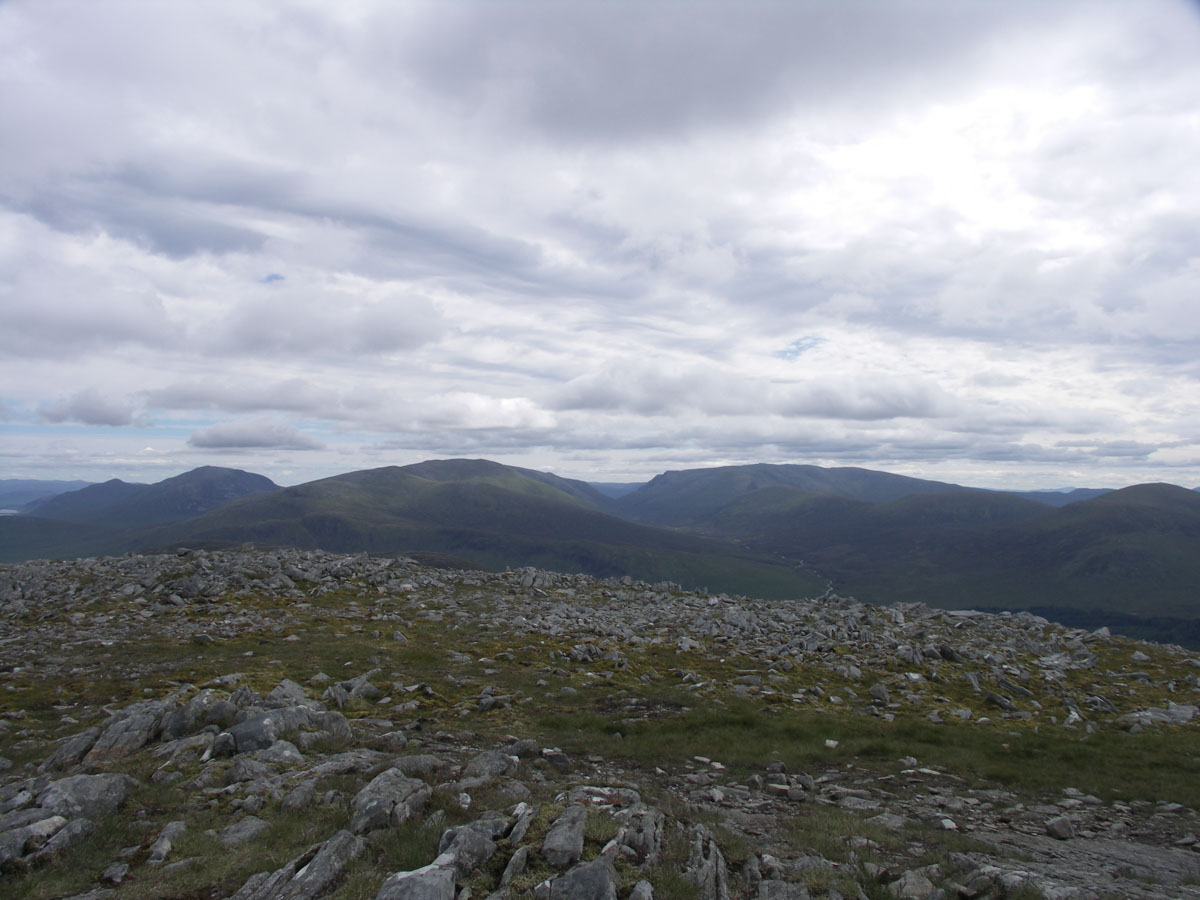 Up to the NE there’s a gap through to the Loch Laggan road and a few easier to access hills. 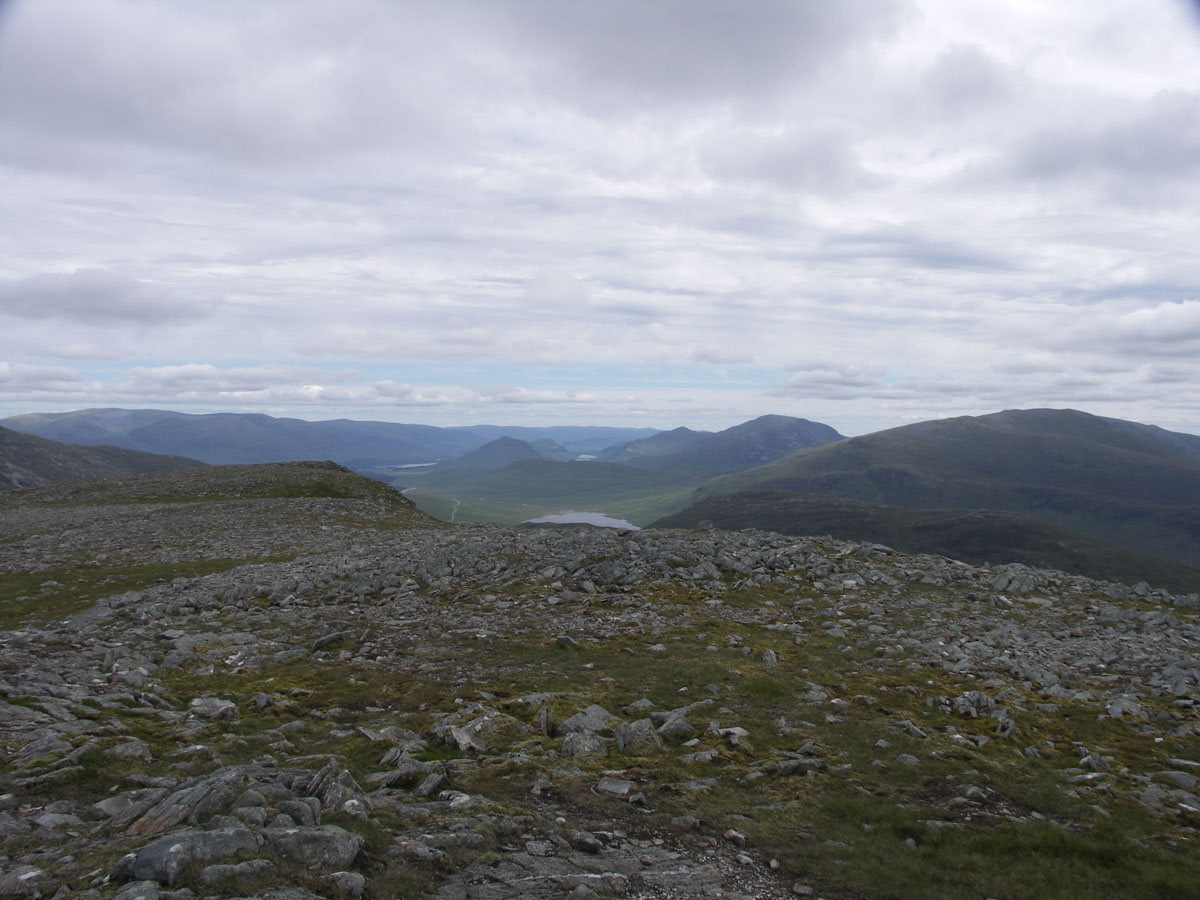 We had to carry on, although walking back to the car meant there was no pressure of time.

Perusing the maps had shown a stalkers path marked running from Stathossian House up Garbh Bheinn – a southern ridge of Chno Dearg.

We headed down the NE ridge of Beinn na Lap – Sron na Cloiche Sgoilte – and then dropped down to ford Allt Feith Thuill at NN 383 725.

Spotted at least one Plover nest on the way. 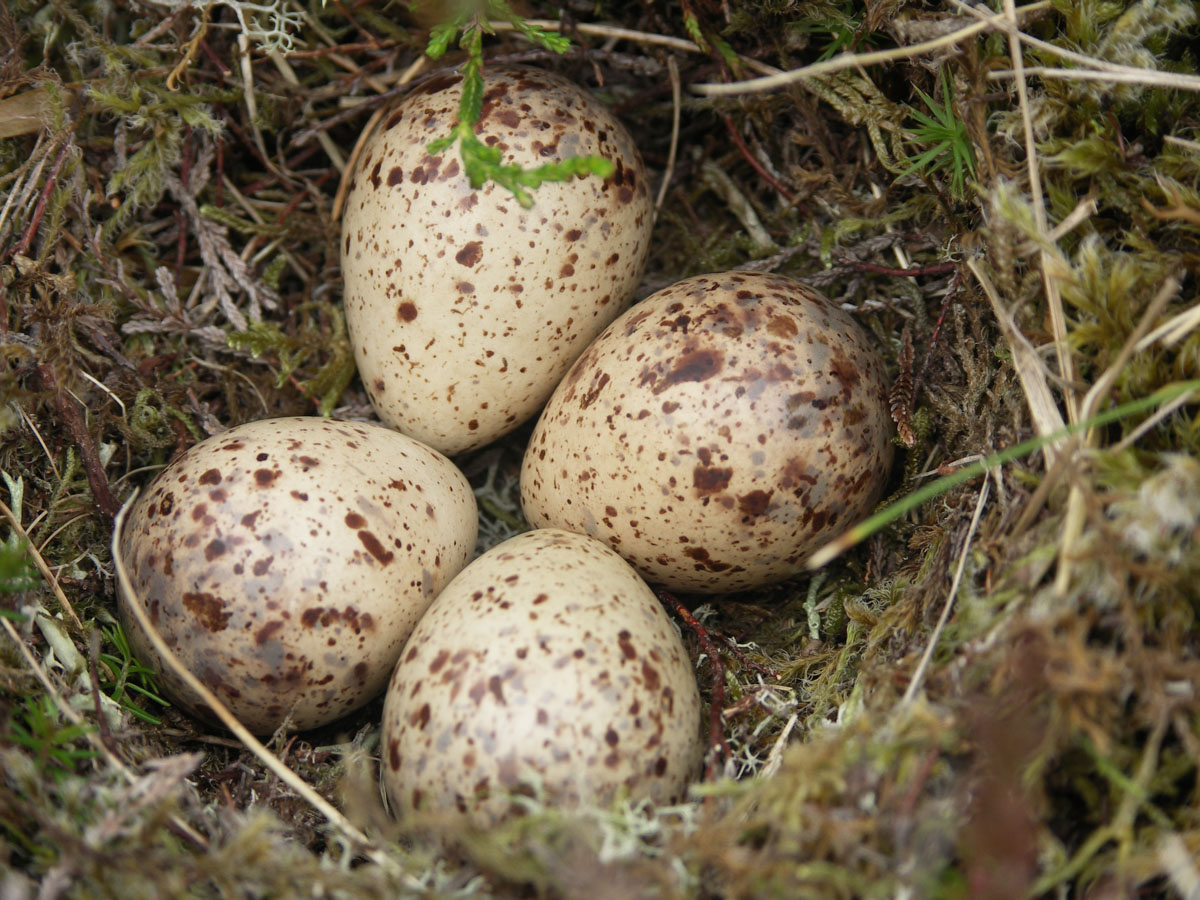 It was a sketchy path up Garbh Bheinn, but actually pretty easy terrain. The day had gone a little grey, the best of the sun in the early morning.

Behind us the hidden away Straths and glens around Stathossian were interesting to see. 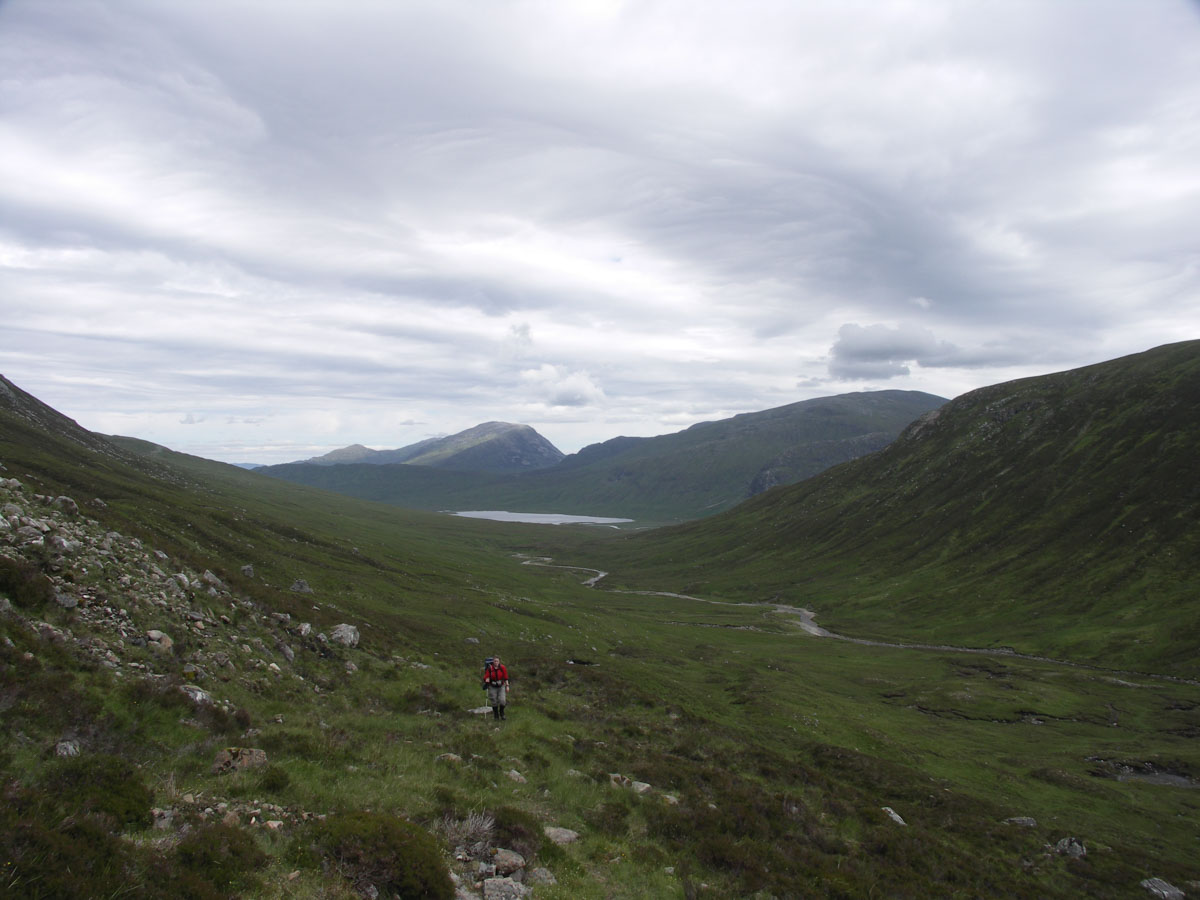 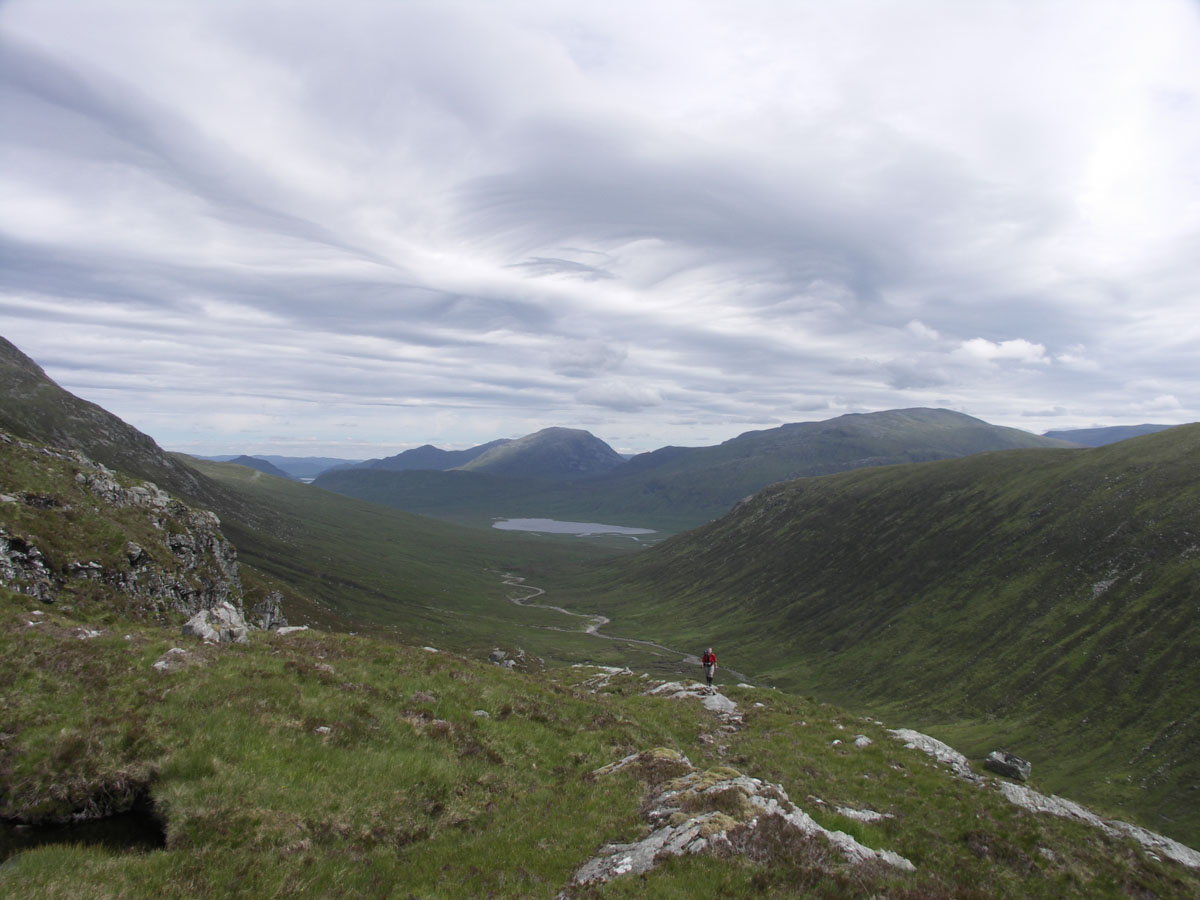 This top has good views of the Strathossian area.

Beinn a Chlachair from Meall Garbh 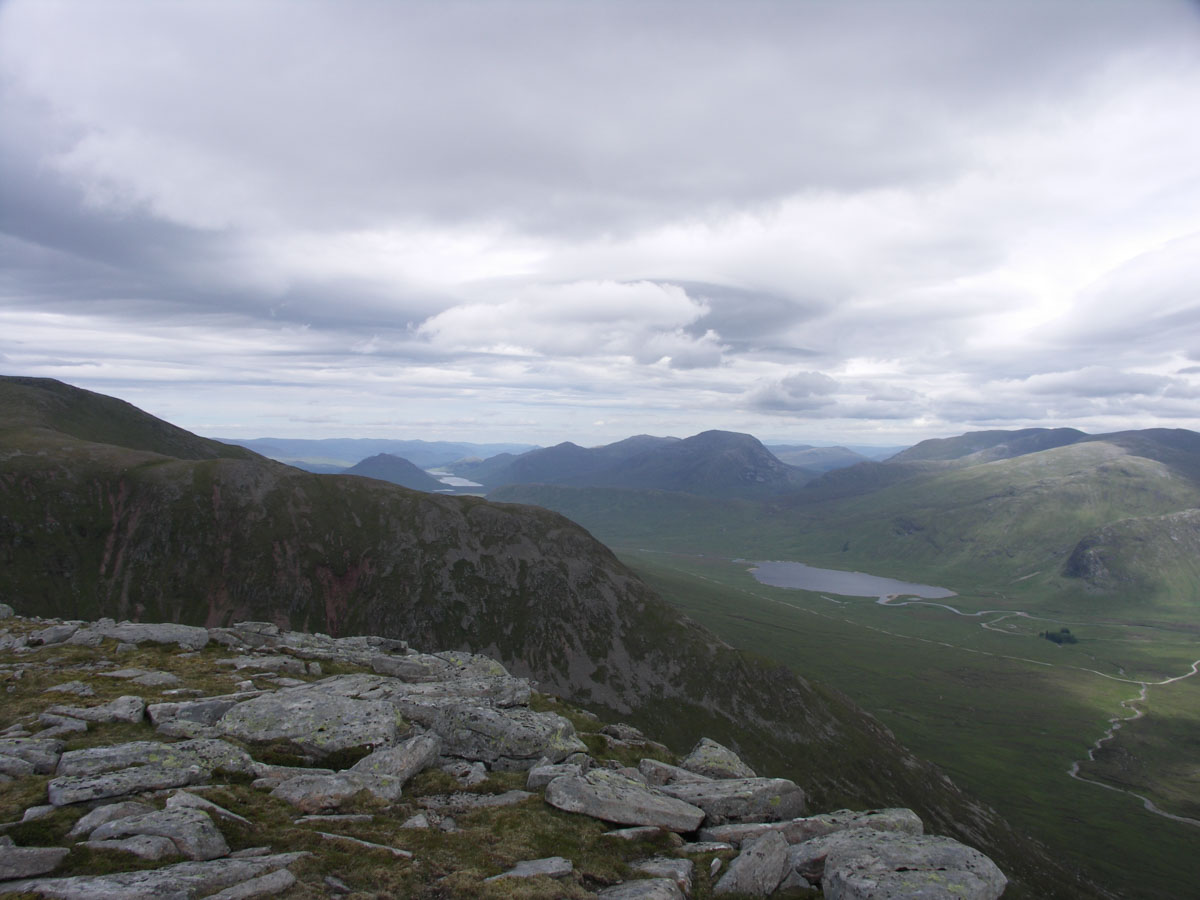 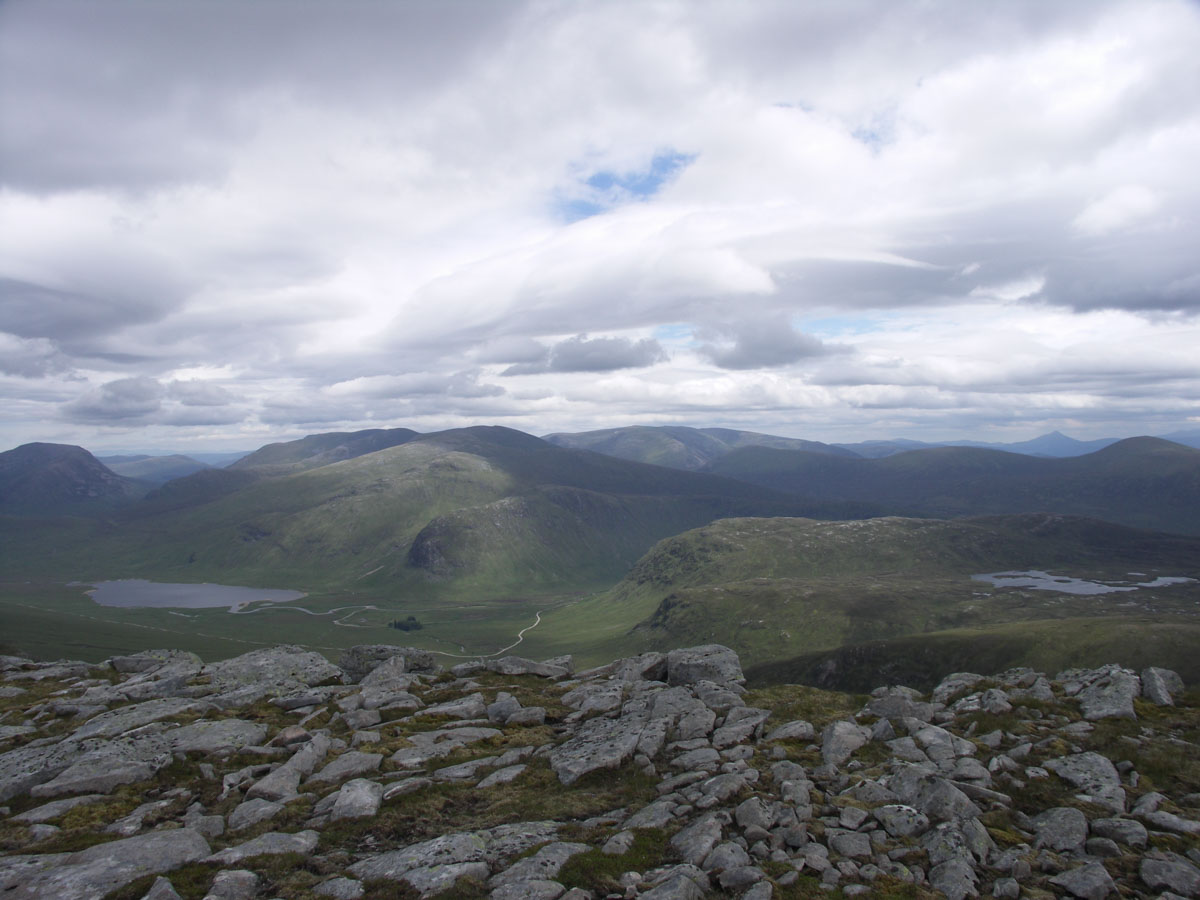 To the west the Easain Munros are across Loch Treig. 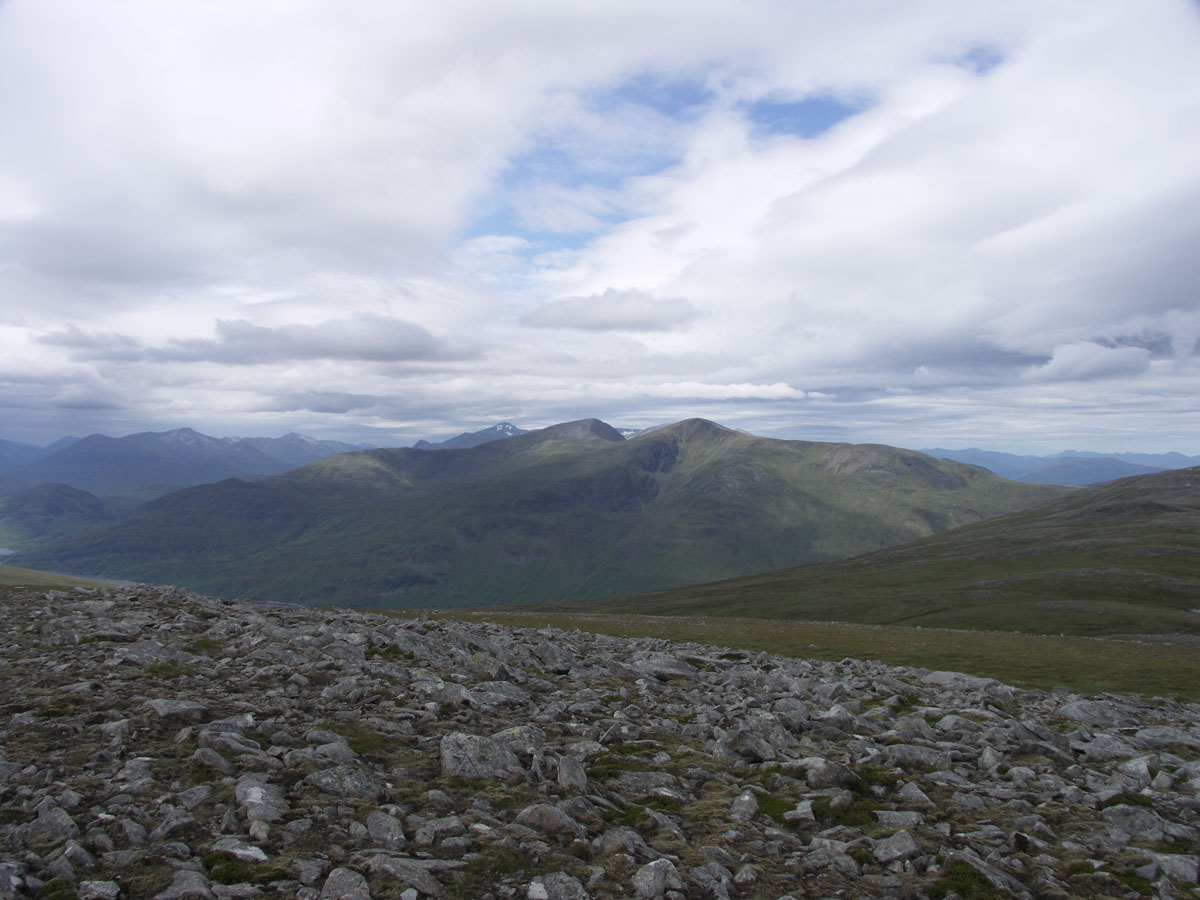 From there we headed for the car, back over Chno Dearg and then joining the SMC Red Route back from the munro to Fersit and the car. 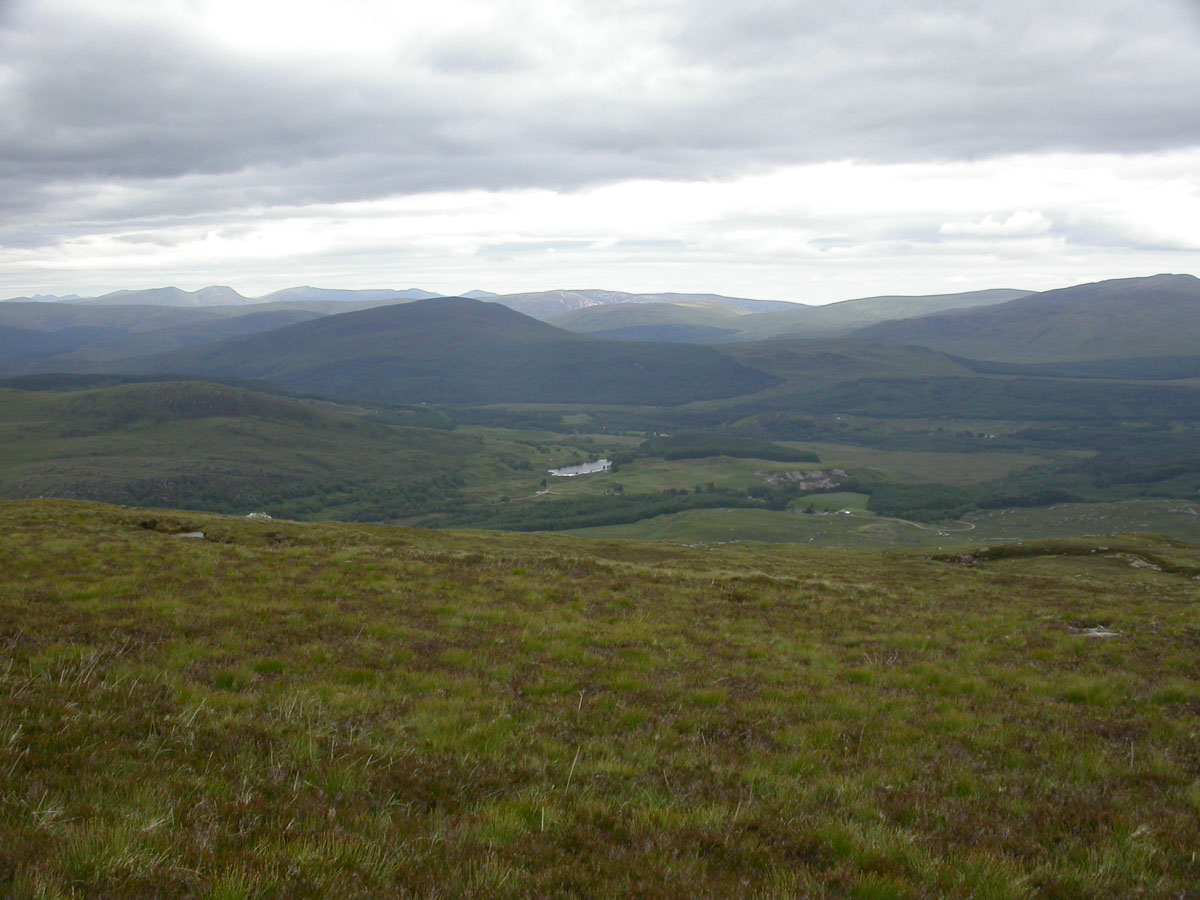 This was a good route – far preferable to fitting a walk in between trains. Would certainly do this one again some day.