If anyone knows where we left the receipt for summer 2007 we should ask for our money back!

Forecast had started last week teasing the prospect of sun, but had become less inspiring as time went on. Still you never know, headed for the Fannaichs to reclimb Sgurr Mor.
Arrived at the Loch Droma car park at 0745 and headed out across the dam and then along the road by the pipeline. Cloud base was down but at least it was dry and enough of a breeze to keep the midge down.
The road peeters out at NH 214 743 but a fair track continues up the Allt a Mhadaidh to its source at the loch at NH 202 735.
The SMC book suggests skirting Loch a Mhadaidh on its N side to tackle the headwall straight on. Did this last time – over 1km of peat bog then a steep climb and irritated at the bealach to notice a track coming up from Creag Raineach Mor. In the absence of significant snow I’d strongly recommend turning from the Allt source straight up to Creag Raineach Mor and then following the ridge to a track which slants under the E face of Meall Chrasgaidh to the bealach. This route opens up the views to Loch Broom and An Teallach much earlier and is significantly easier going.

Anyway we took this route and rewarded by seeing 2 juvenille peregrines trying out their flying over the ridge. View opens to Loch Broom and Stac Pollaidh. 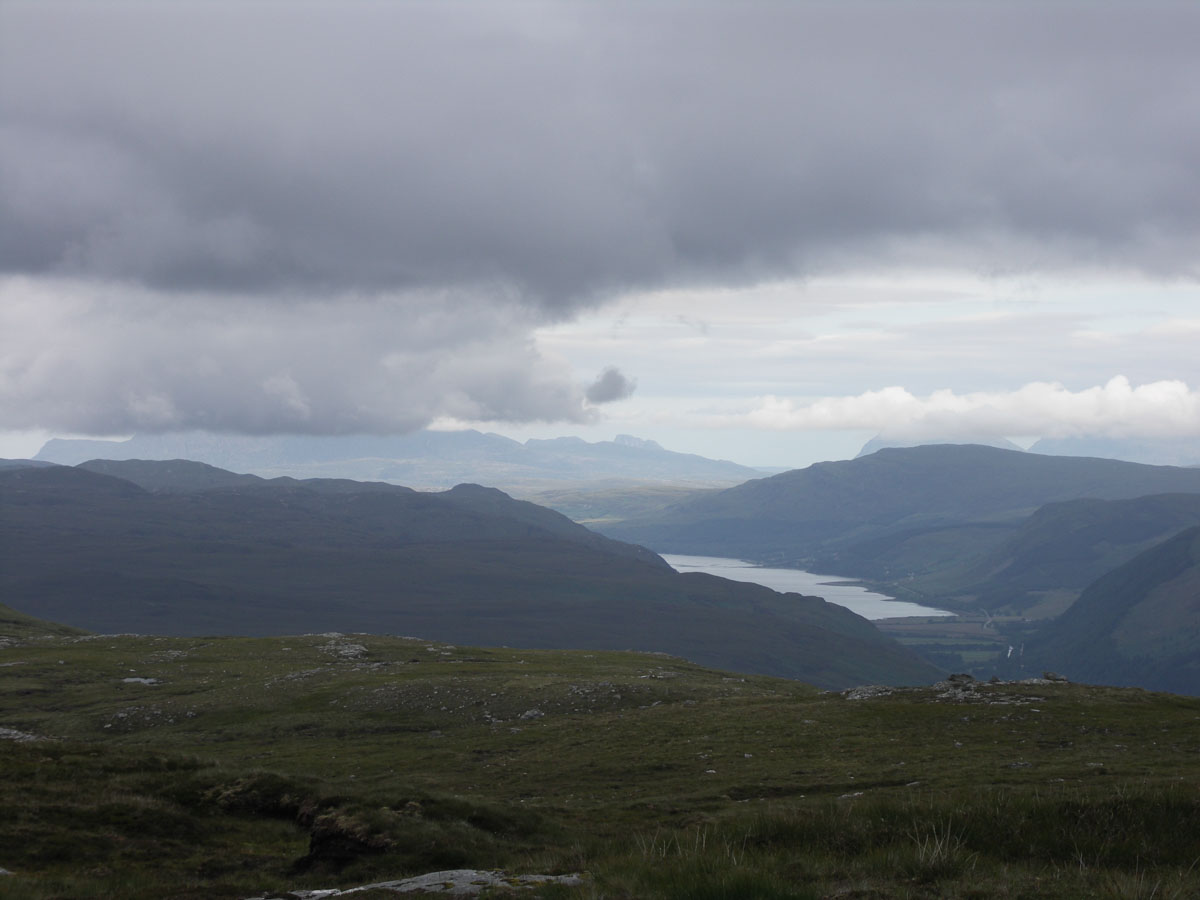 Got to the bealach – cloud base hovering at 800m. Swithered with just doing Meall Chrasgaidh and heading back but felt the base was rising so turned for Sgurr Mor. Patches of Starry Saxifrage and Eyebright here. 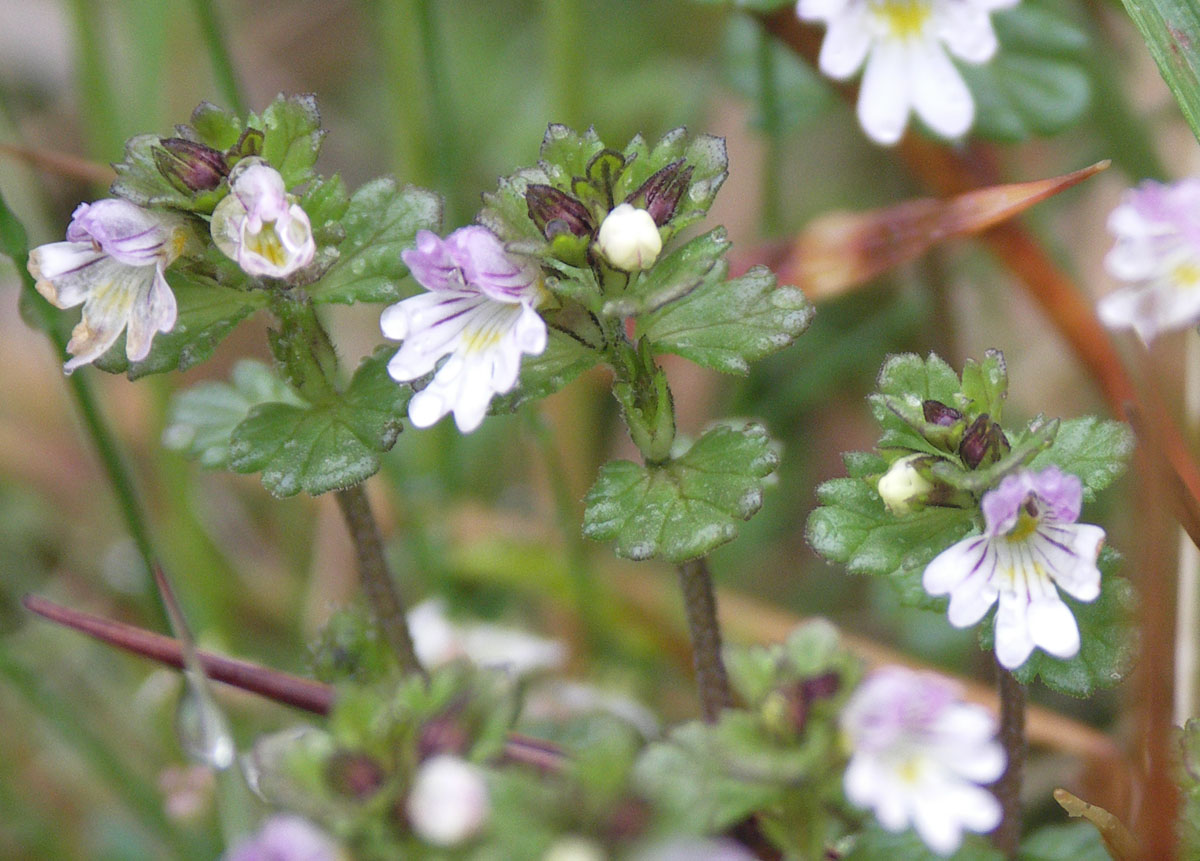 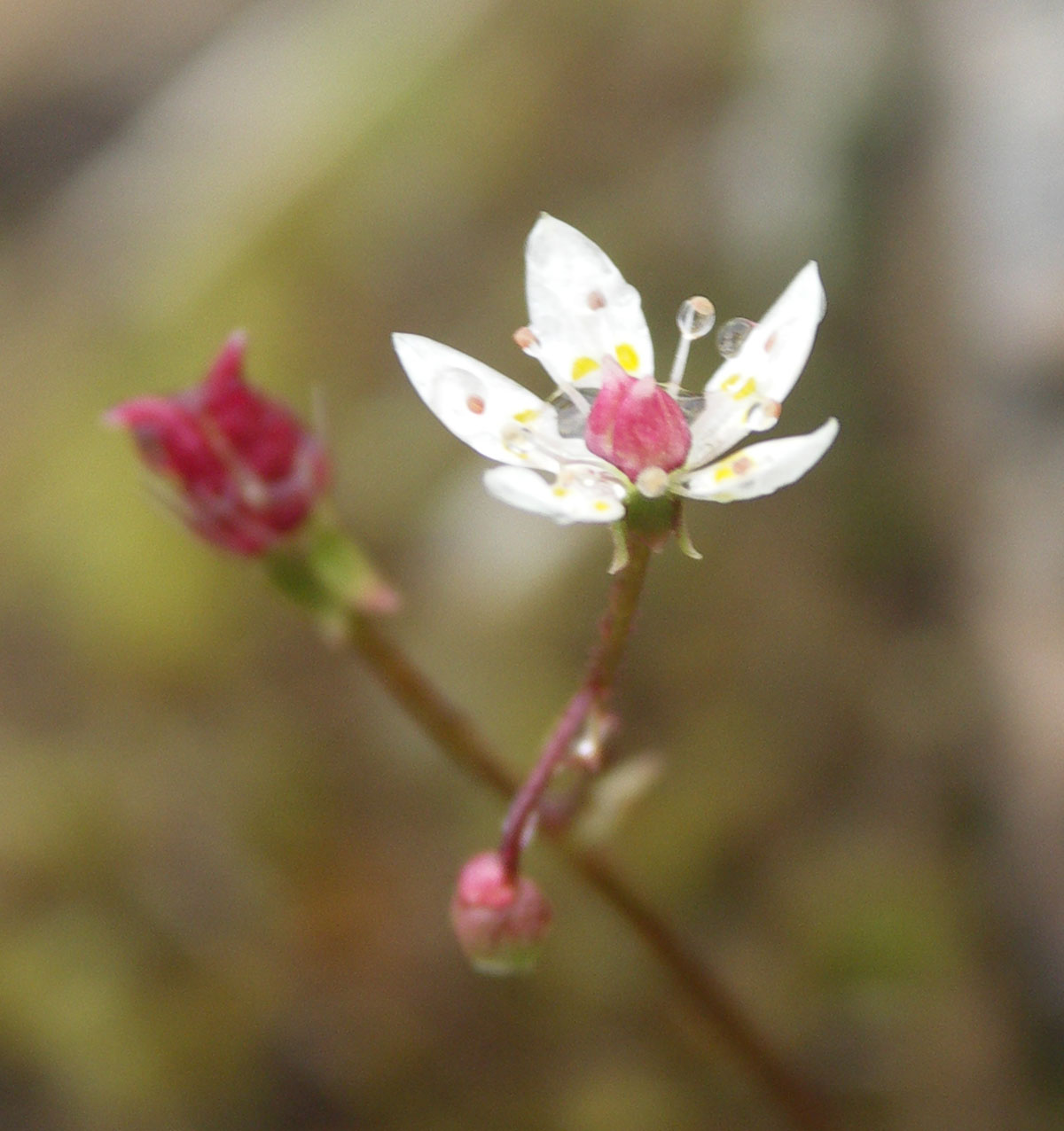 Good call –base rose 400m in the next 30 mins and cleared the tops. The climb from the bealach above Loch a Mhadaidh to Carn a Criche opens up great views of the E cliffs of Sgurr nan Clach Geala – fabulous penthouse accommodation for eagles and peregrines. 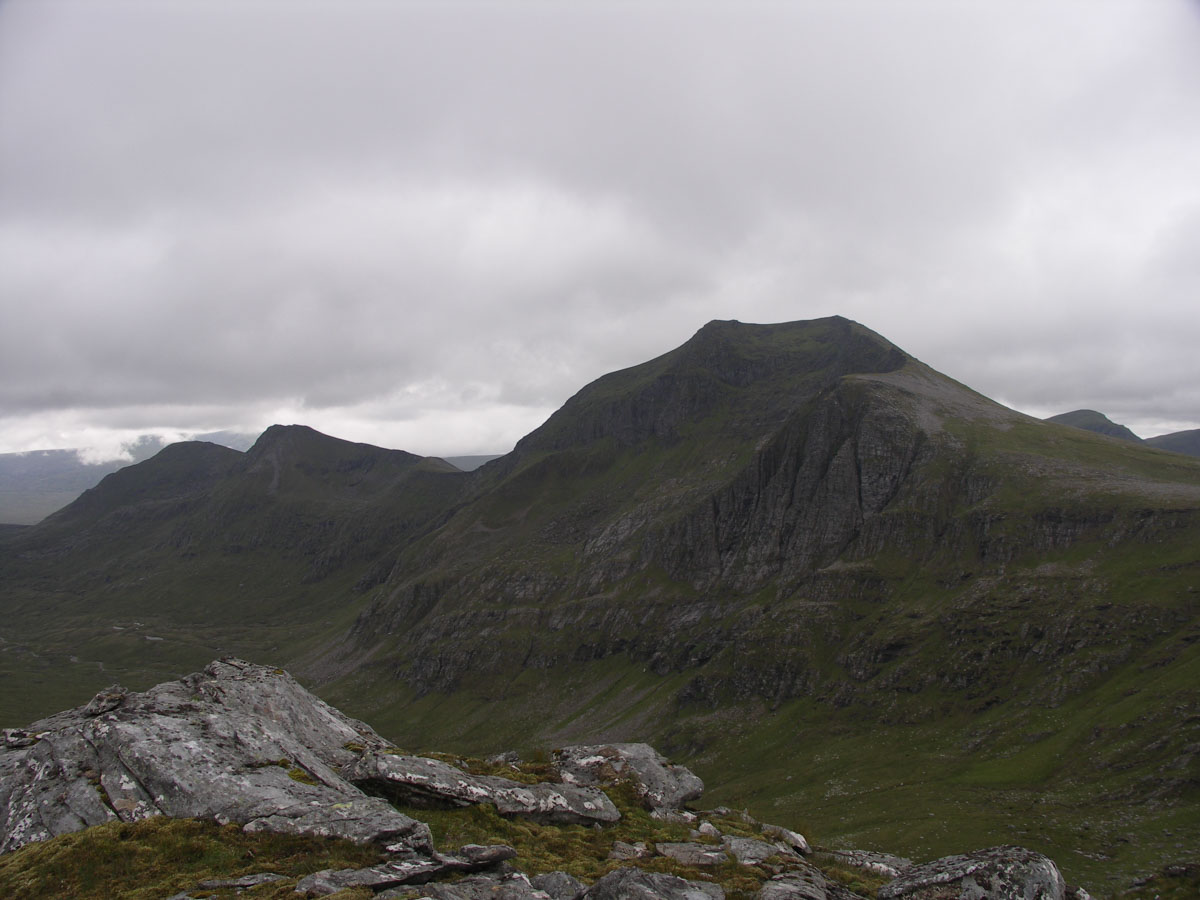 Got to the summit with good views to Fisherfield, An Teallach, Assynt and Beinn Dearg. Could just see the N end of Skye but I’m sure that on a clear day the views must be stunning. 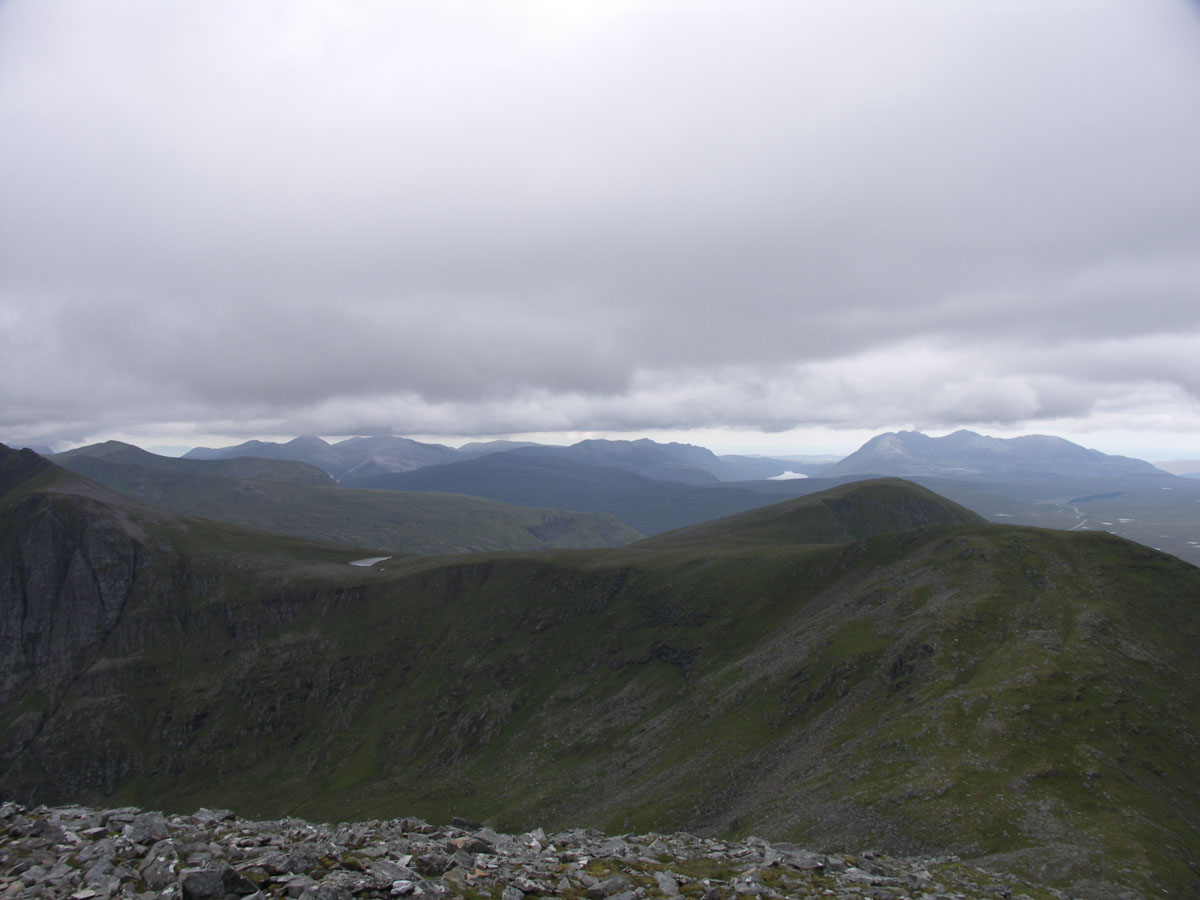 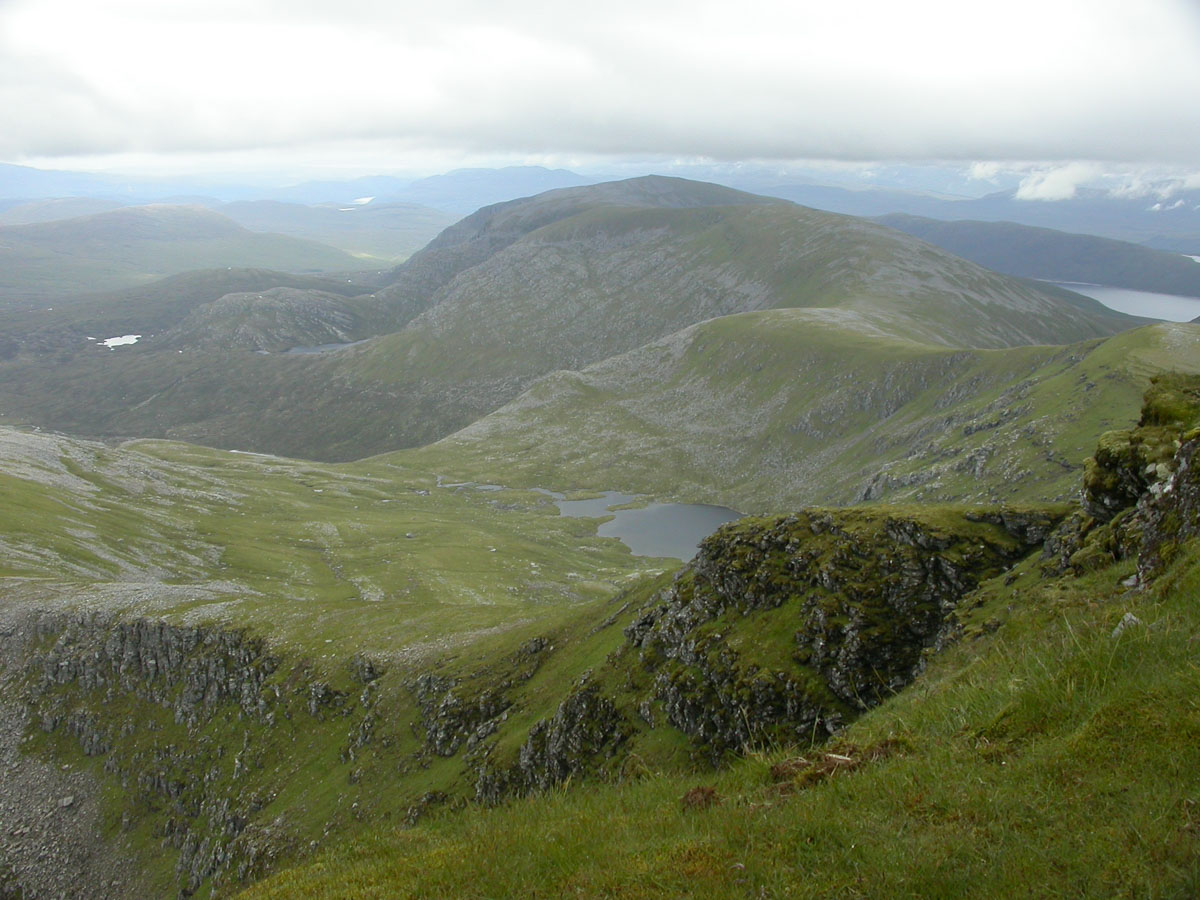 Lunch the headed S down the ridge about 200m to the ridge running E to Beinn Liath Mhor Fannaich, nearly missed this turn in the mist last time.
There’s a beautifully cleared stalker’s path on the S side of this ridge with a shelter around NH 208 716. Good views to Assynt. 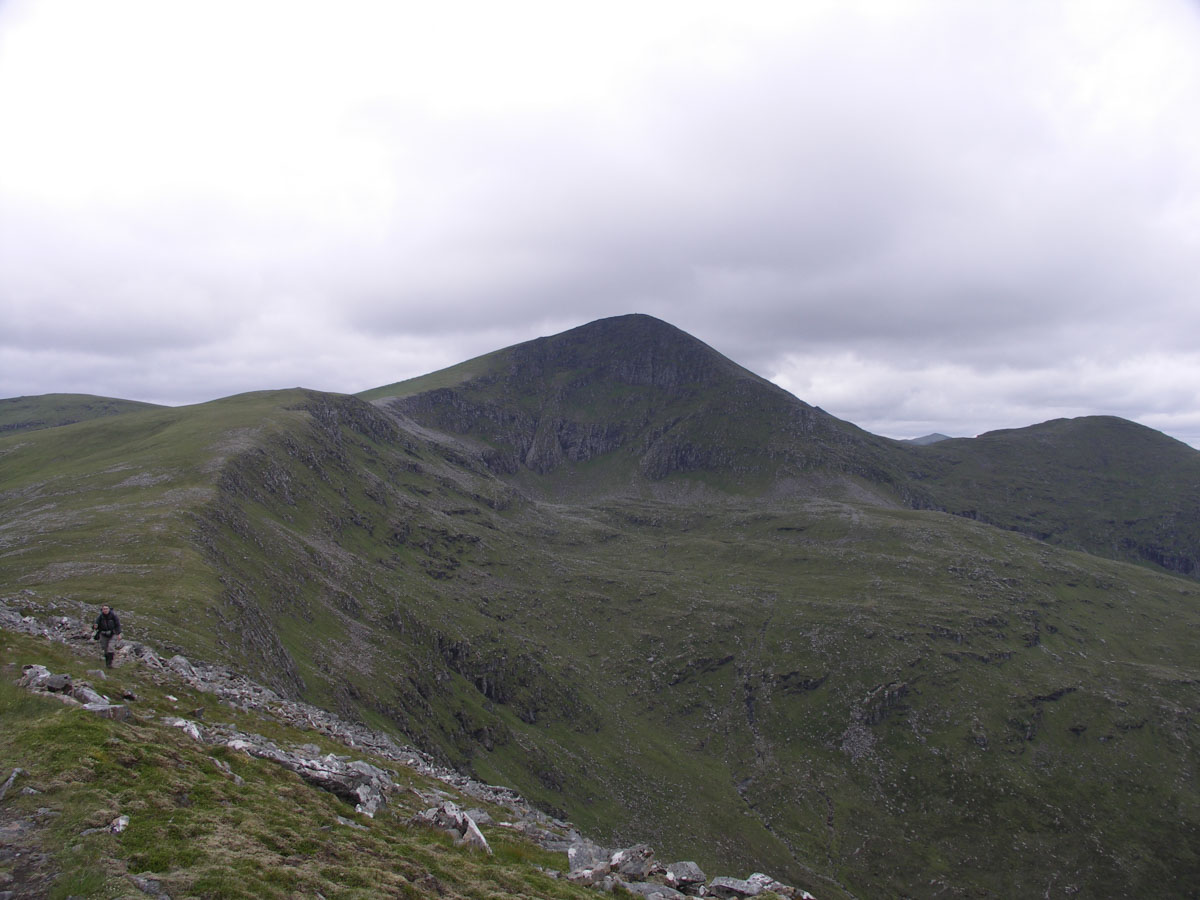 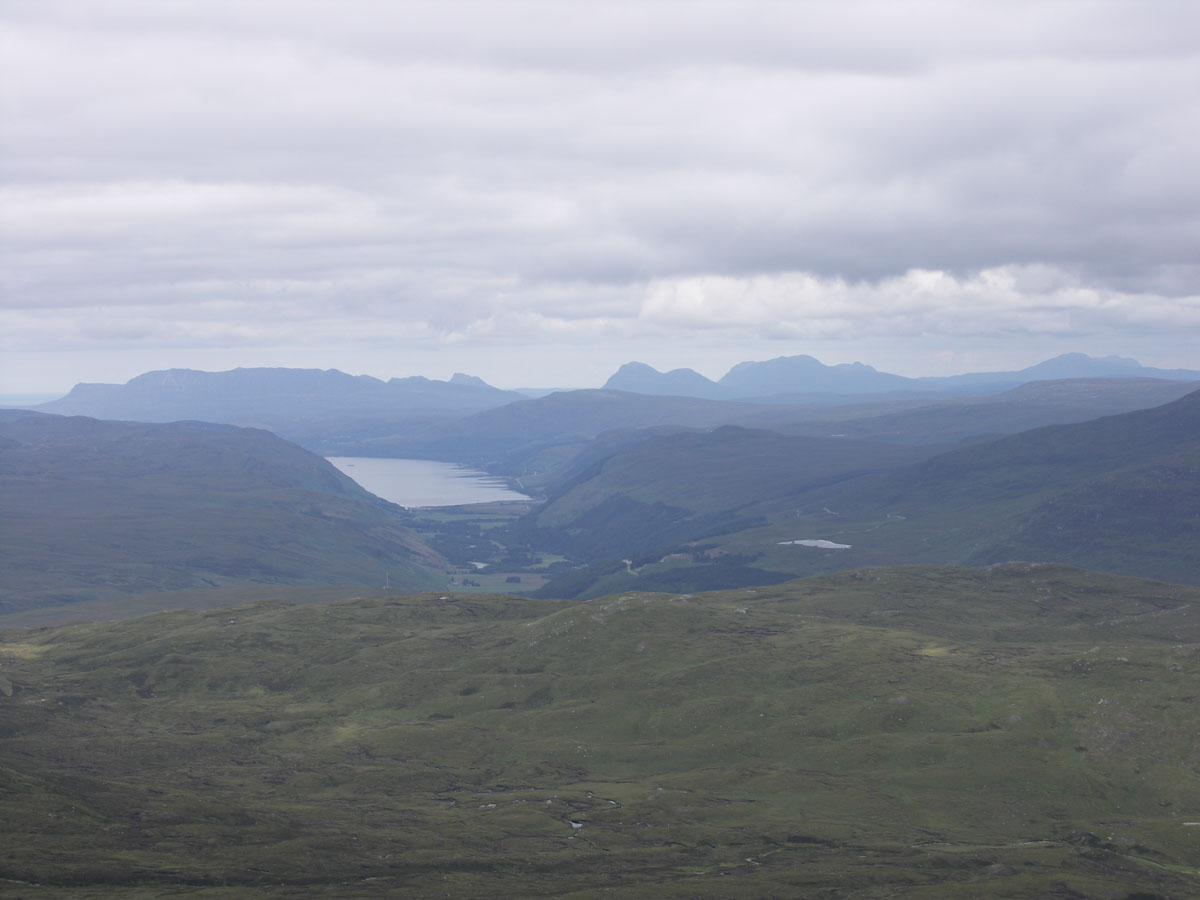 Quick march across to Beinn Liath Mhor Fannaich – best to follow the stalker’s path right through to a point NNE of the summit where you can get up with least boulder field work. Nice viepoint for An Teallach, Coigach and Beinn Dearg. 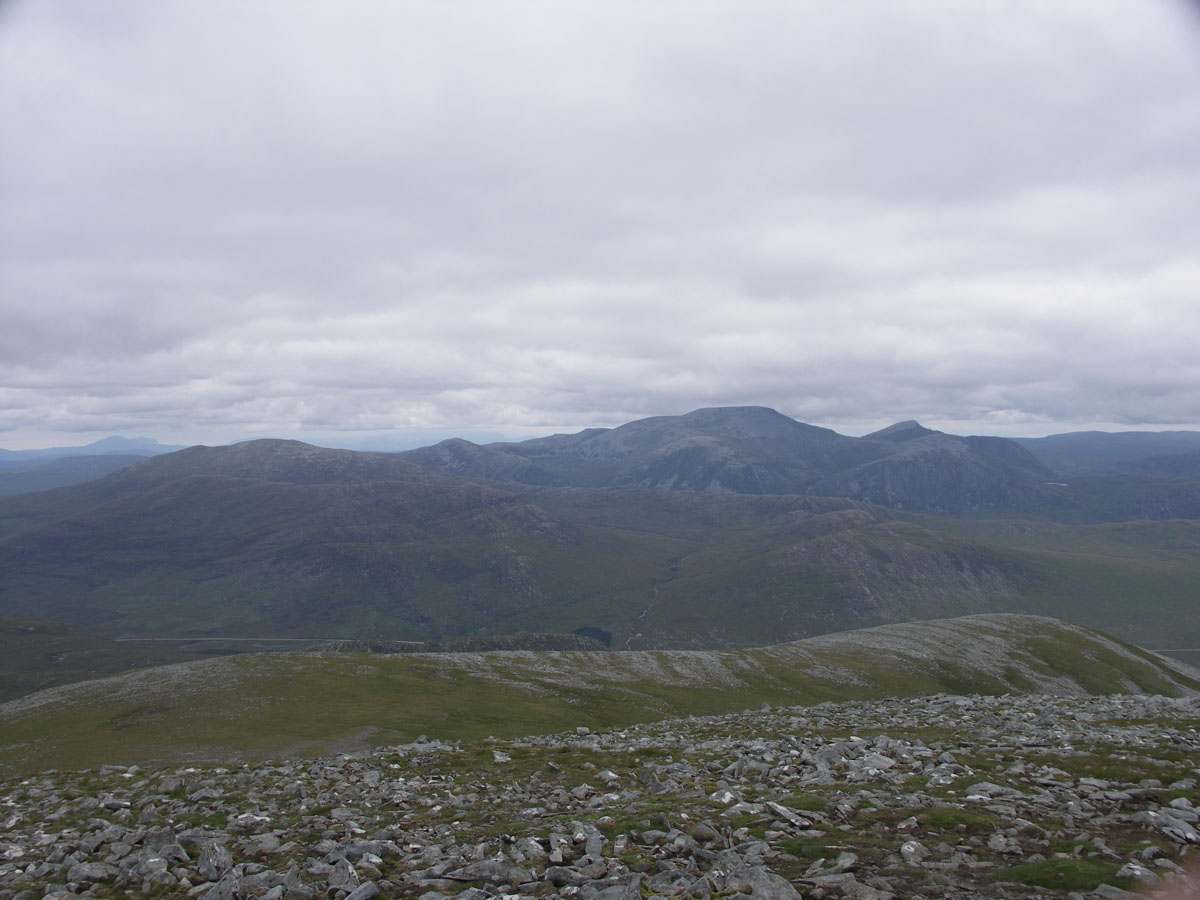 For the descent SMC advise heading from MH 219 727 down the Allt E to Loch Sgeireach then head for the dam on the road. This works OK but this time we headed for the nose at NH 224 731 and headed straight down the edge of the nose. I preferred this route, again drier and less work but I would avoid if poor visibility as there are crags to avoid which would be tricky in the mist.
1km back to the road – lovely crops of Asphodel and orchids. 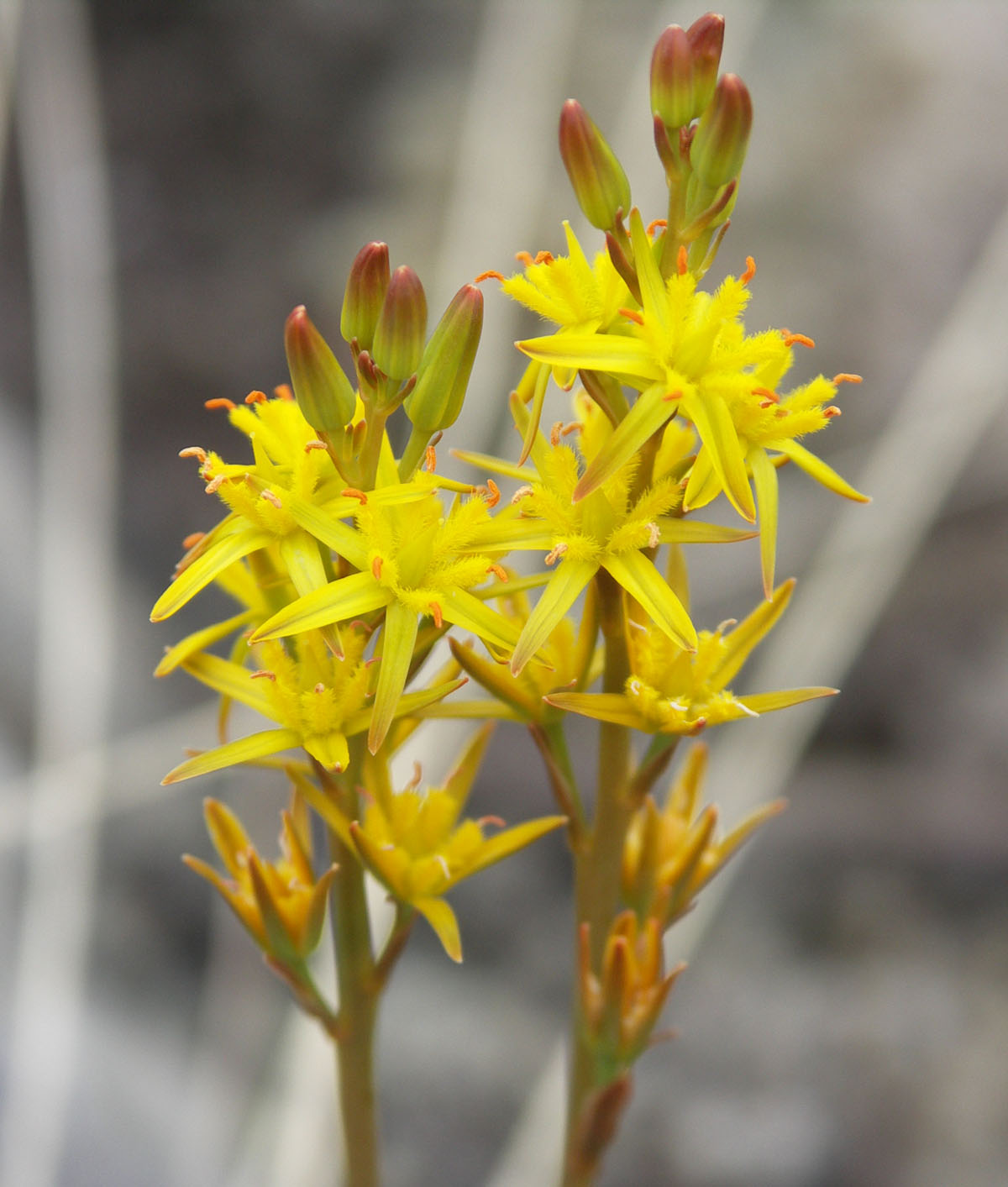 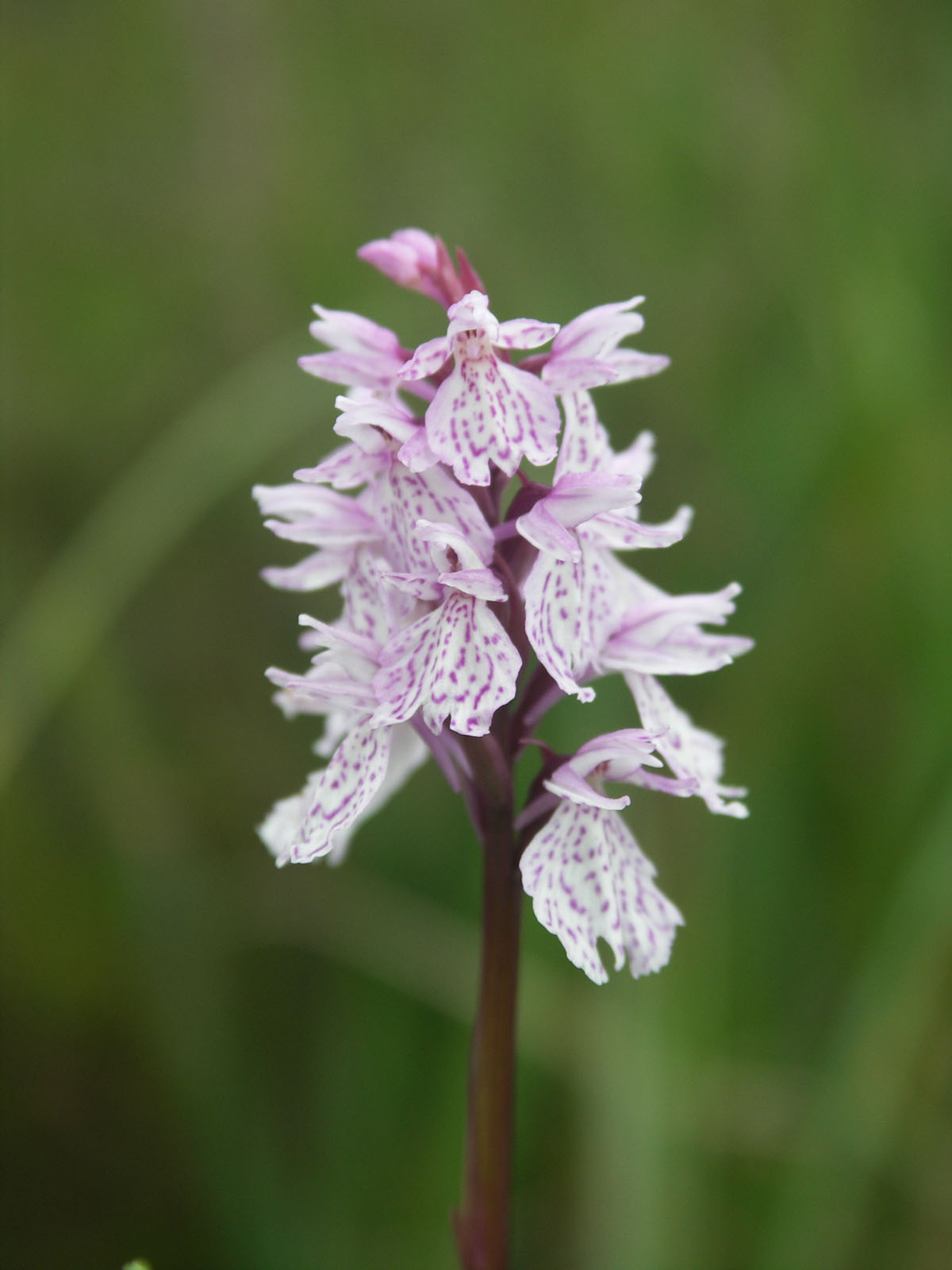 Then 30min back to the car.

20km, nice relaxed walk with the potential for great views.