A pleasant summer day. We decided to head to Glen Feshie and head out to the rather remote Corbett Leathad an Taobhain. This hill is out in the hinterland between Glens Feshie/Tromie to the north and the Gaick/Glen Bruar to the south.

We hadn’t explored any of the further reaches of Glen Feshie so it seemed a good choice.

Parked at Achlean and then headed south down Glen Feshie – it was a seriously nice sunny day.

Glen Feshie is a lovely glen, no public roads south of Achlean so it’s an oasis of calm. 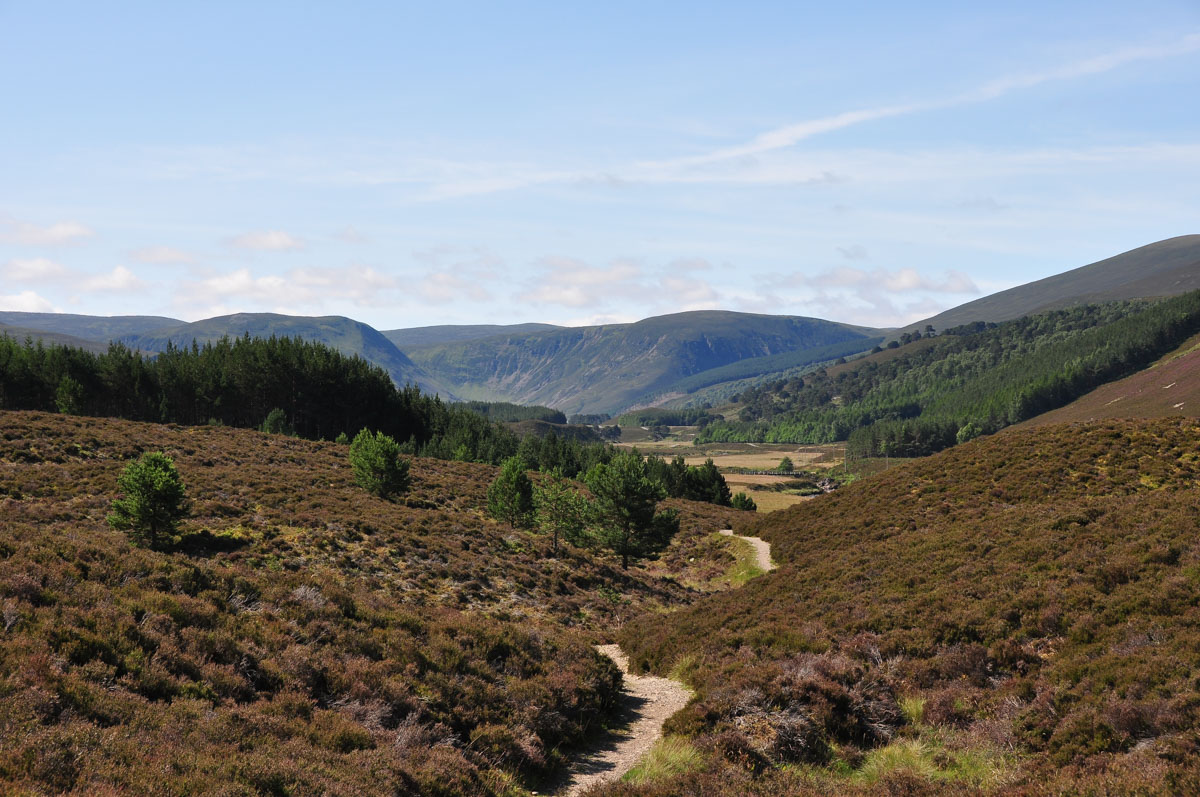 High summer means peak butterfly season – the fritillaries were out and about. 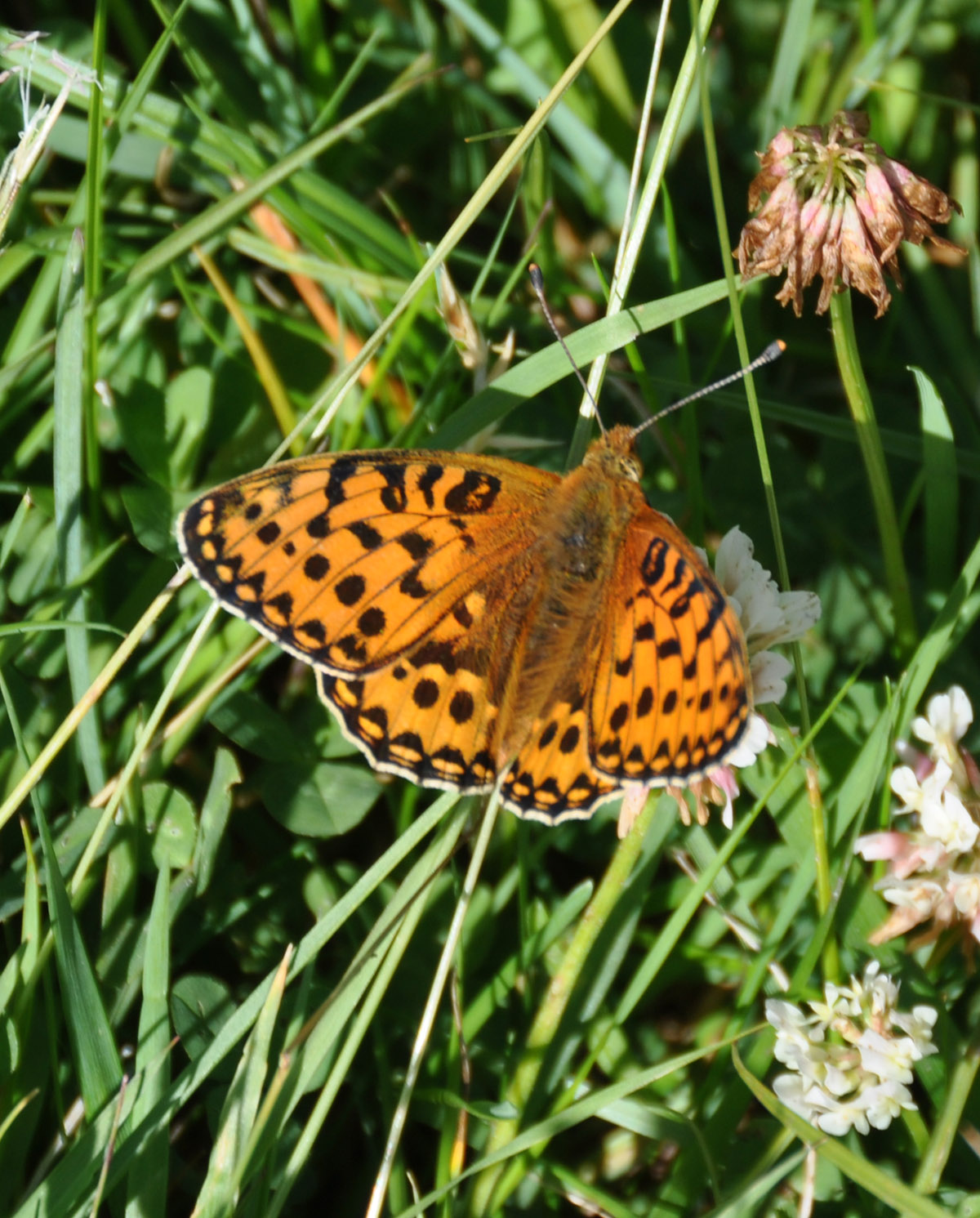 In the distance, about 7km south of the carpark, the glen splits up with the upper reaches of Glen Feshie curling SE then E, and the 2 passes of Slohd Mor and Slochd Beag heading SW and S respectively.

Quite a long walk in as the high ground draws nearer. 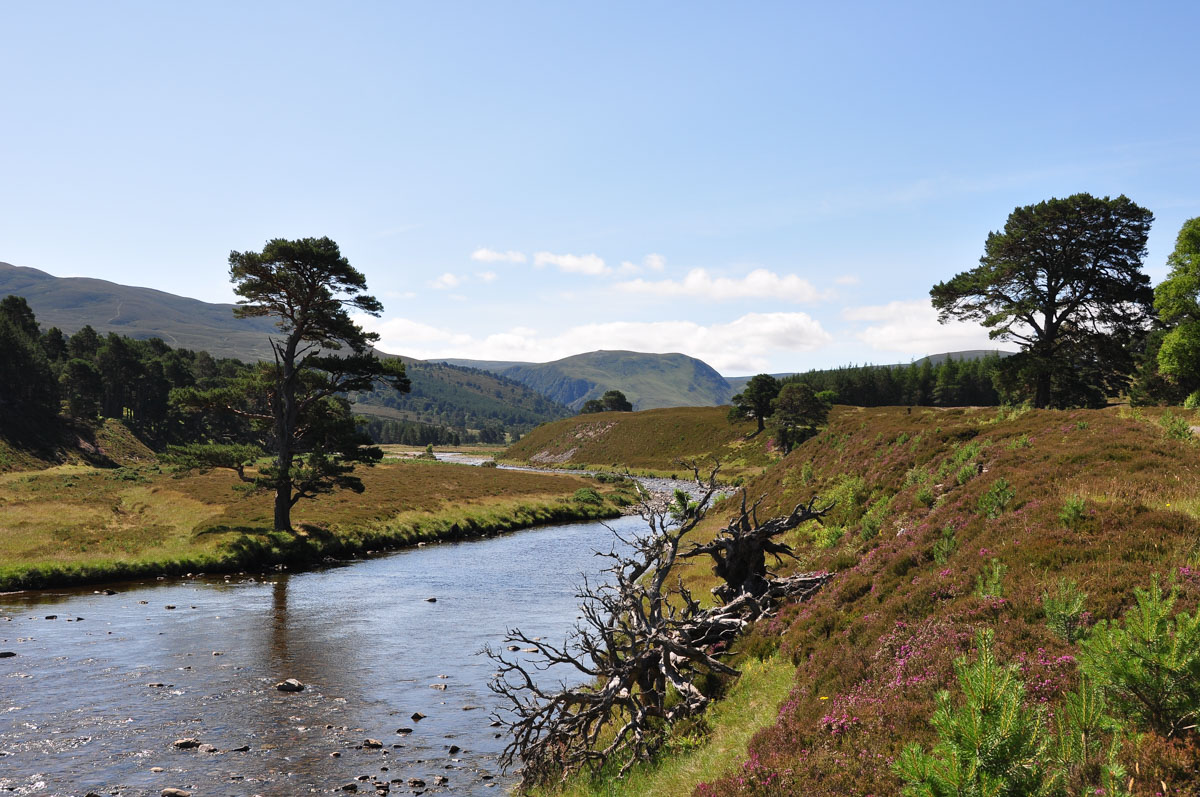 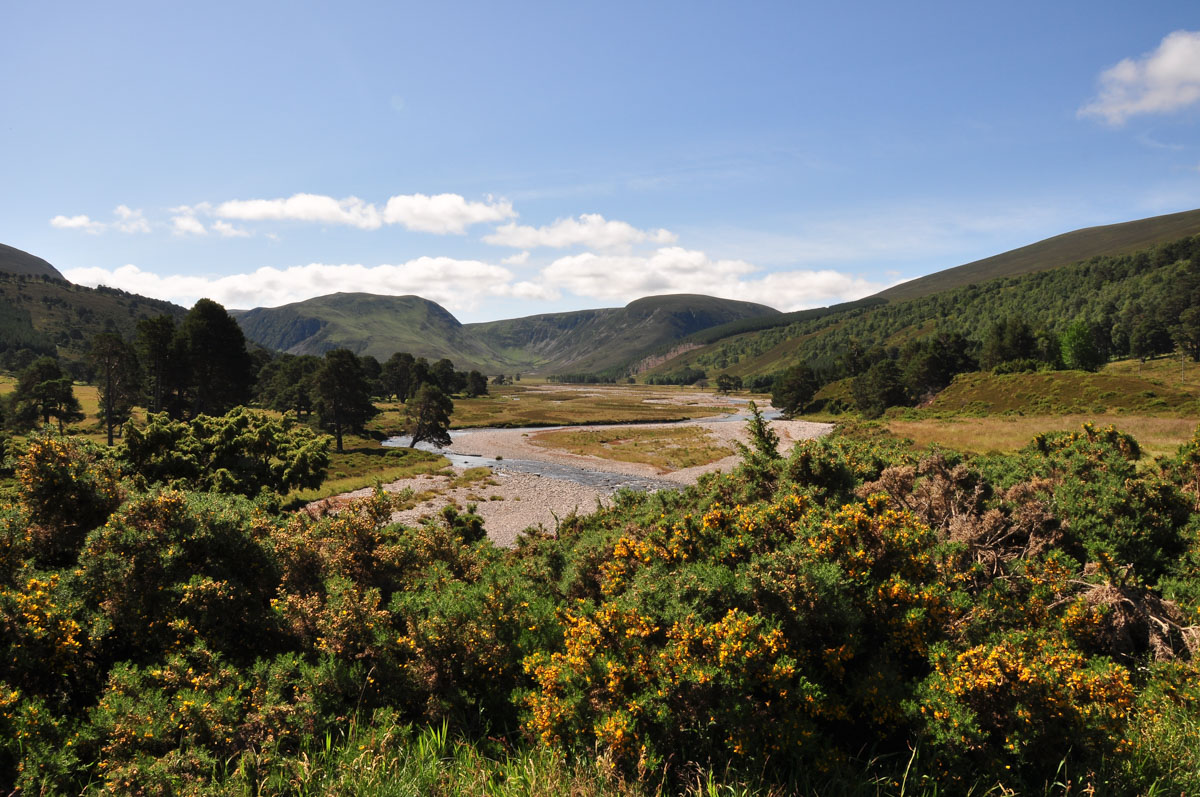 Once near the head of the glen Creag na Callich sits ahead between Glen Feshie and Slochd Beag. 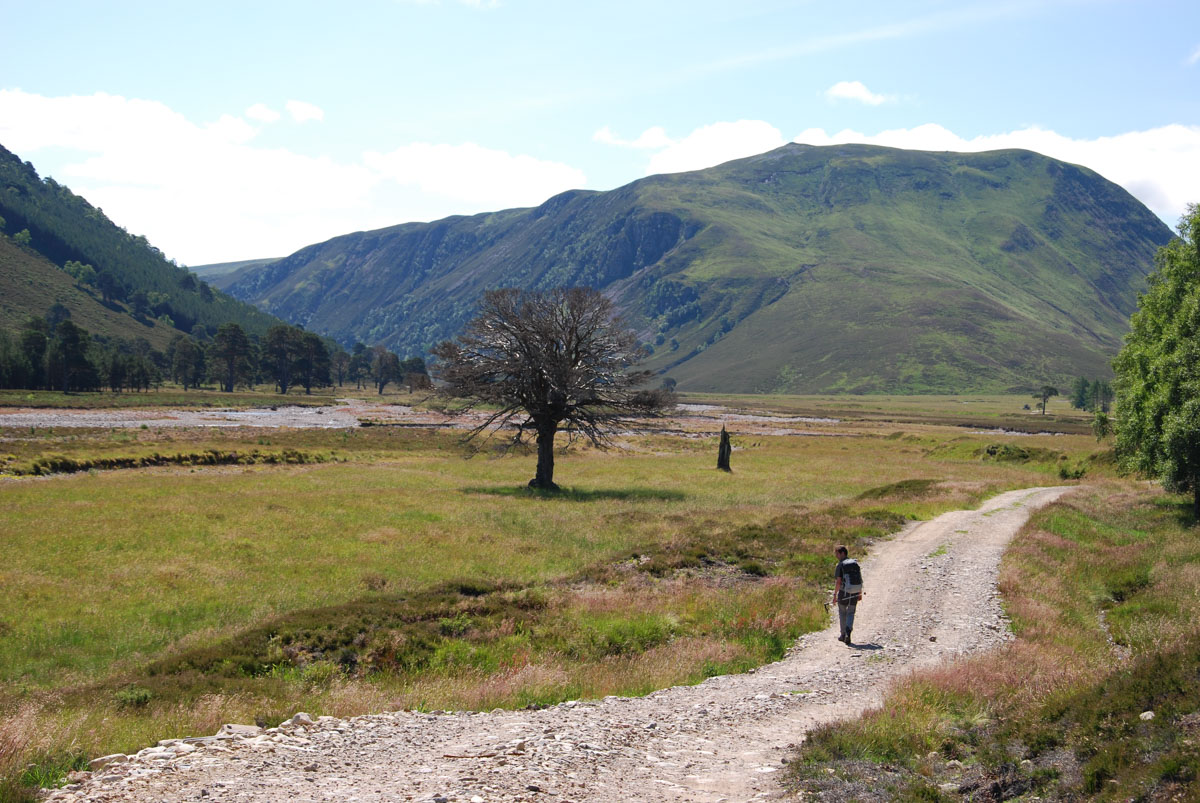 The upper reaches of Feshie are wooded, although not all the trees are survivors. 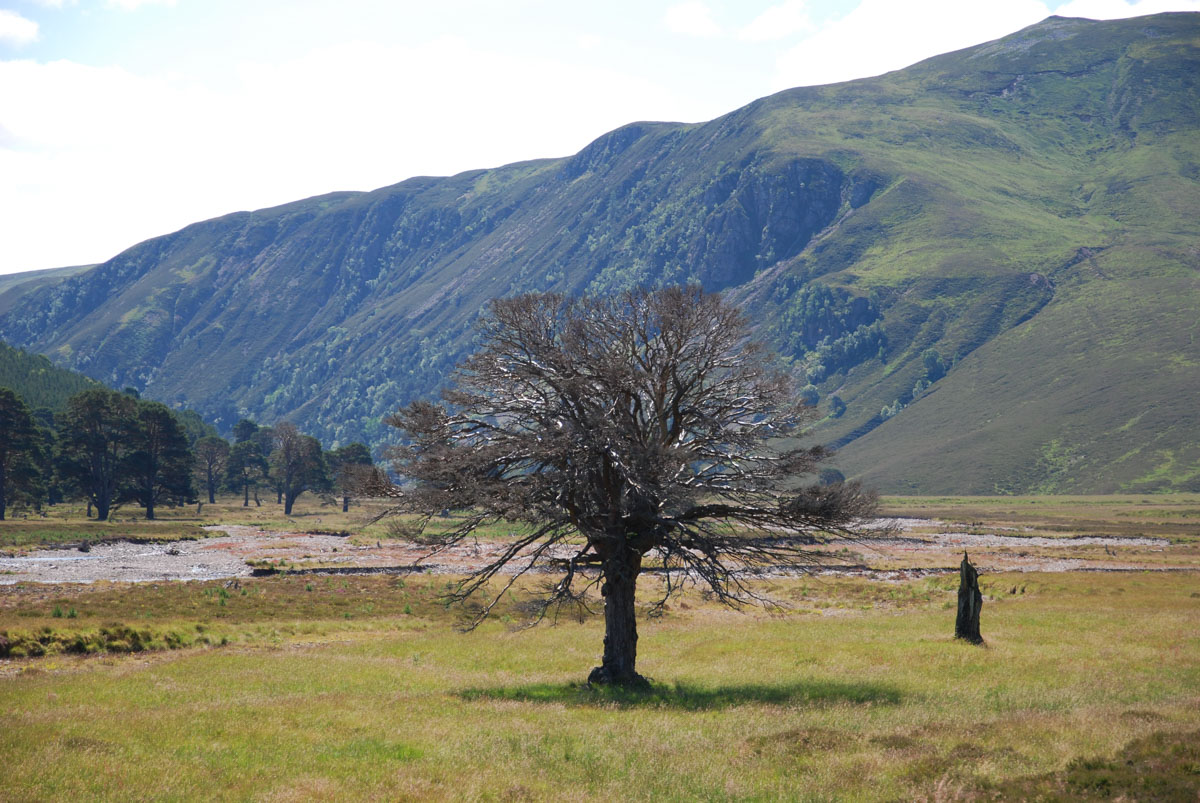 The reason for Peak Butterfly Season is Peak flower season – lots of meadow flowers on show. The Yellow Saxifrage in particular was striking. 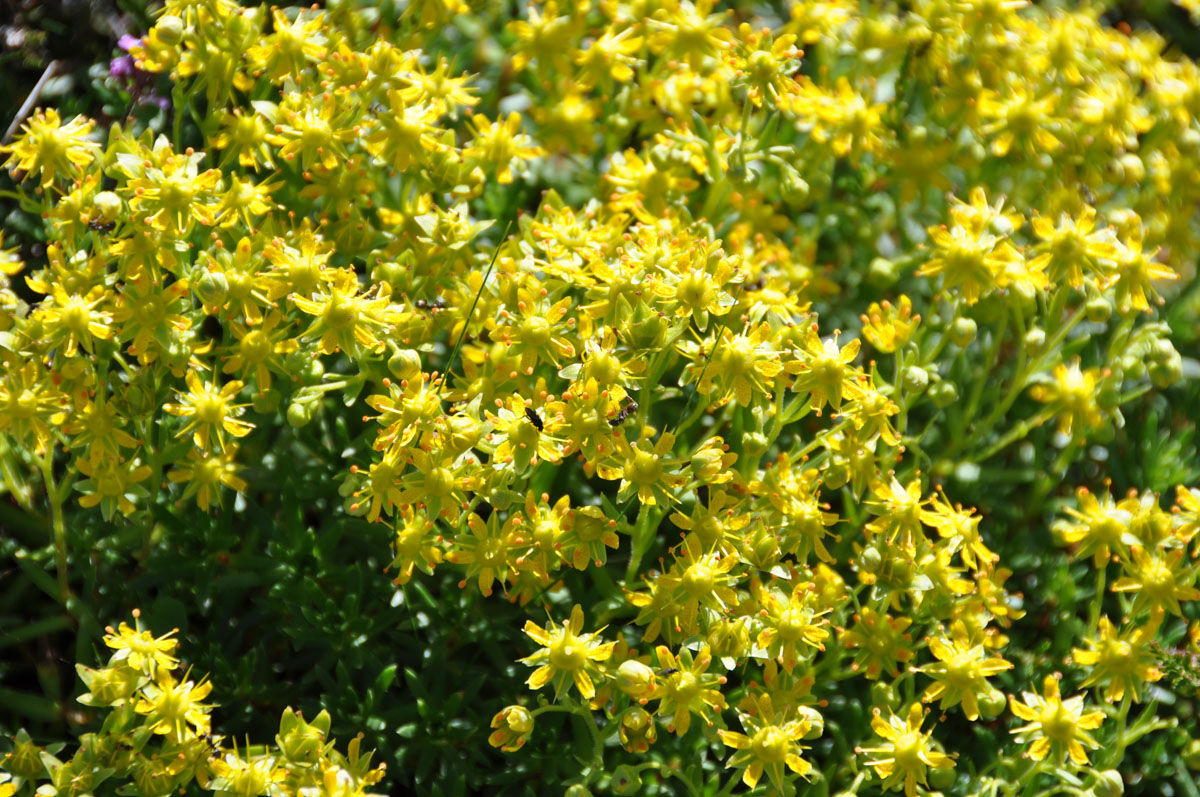 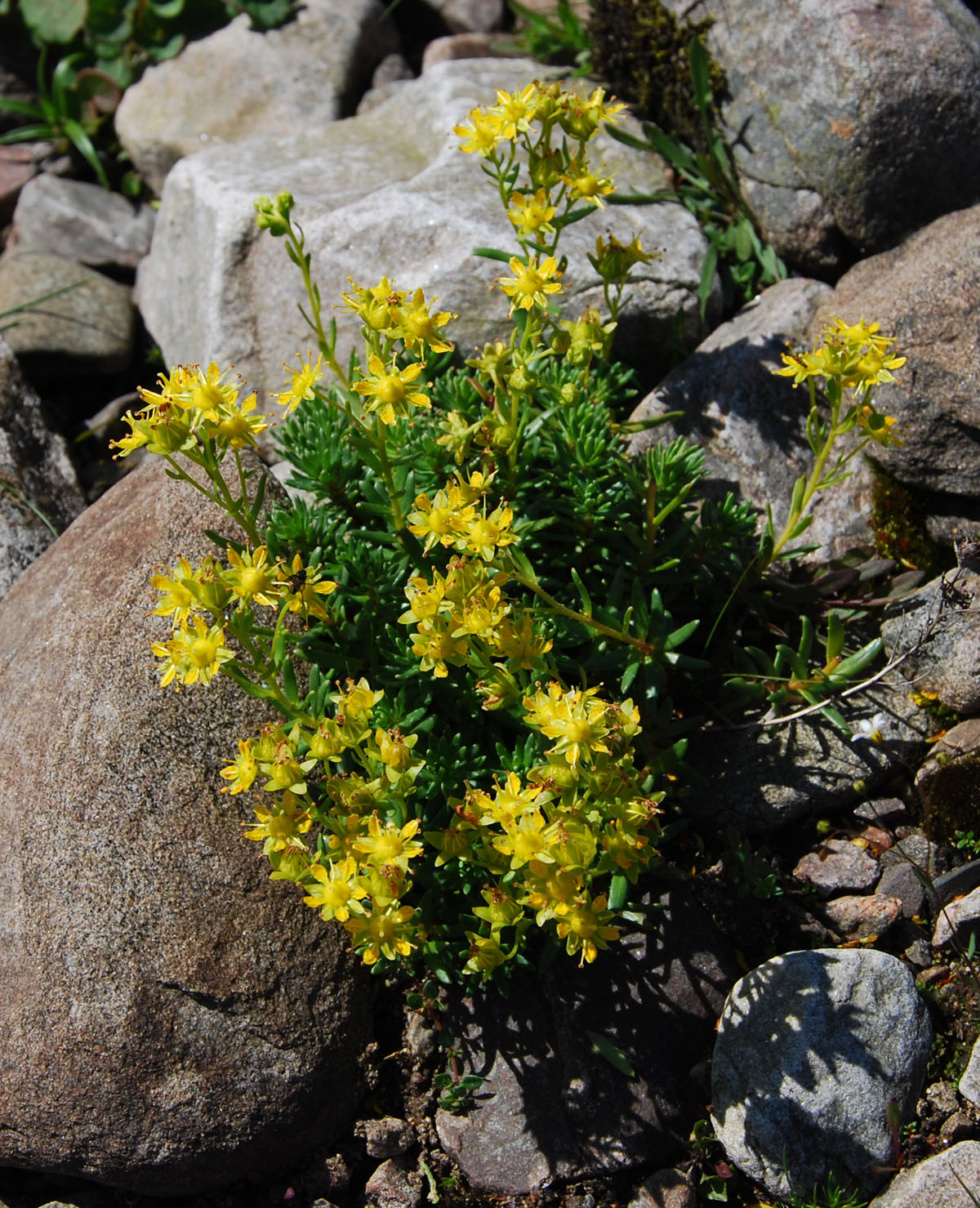 The view back north doesn’t quite give feel of the distance walked. 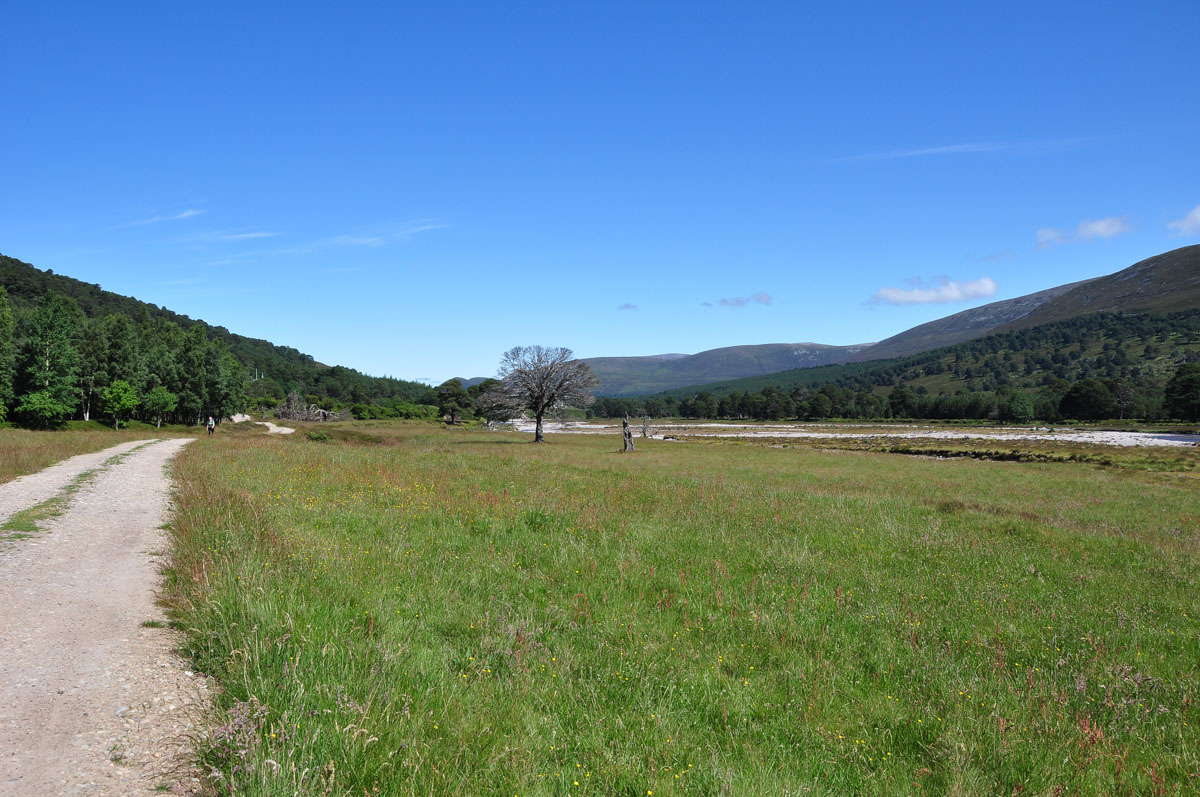 The approach hadn’t taken too long – all on good path/track so progress was fast. 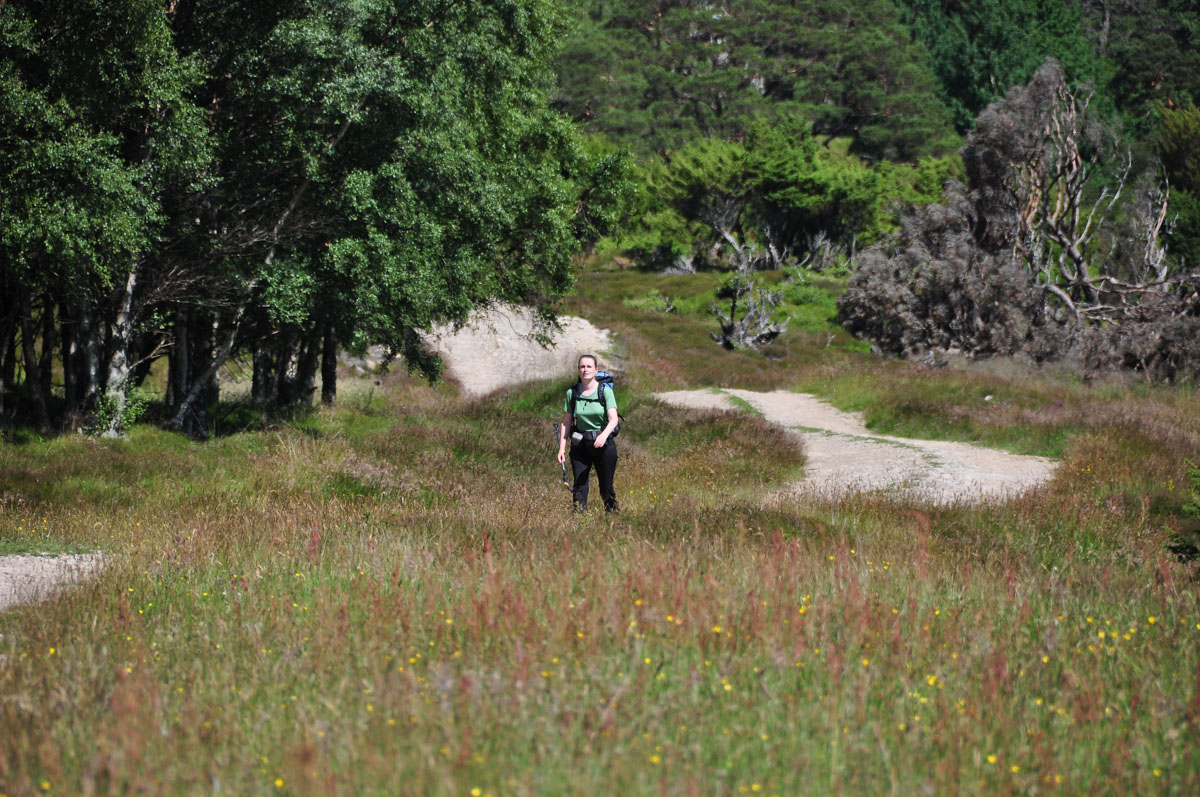 From the ruin at Ruigh-fionntaig we carried on along a wee path into Slochd Beag. The path continues up Slochd Beag and then on along Allt Lorgaidh. 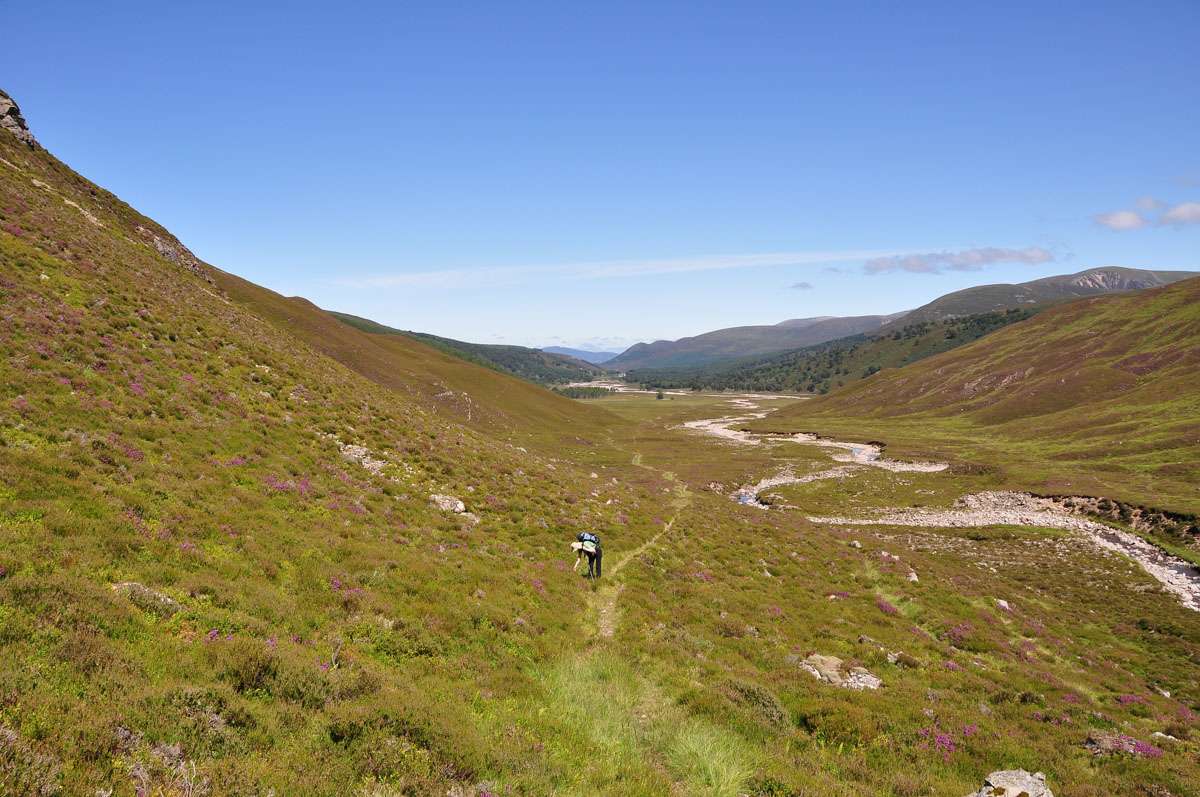 With a long day length there’s no need to hurry, we took time to look at the flowers on the way too. 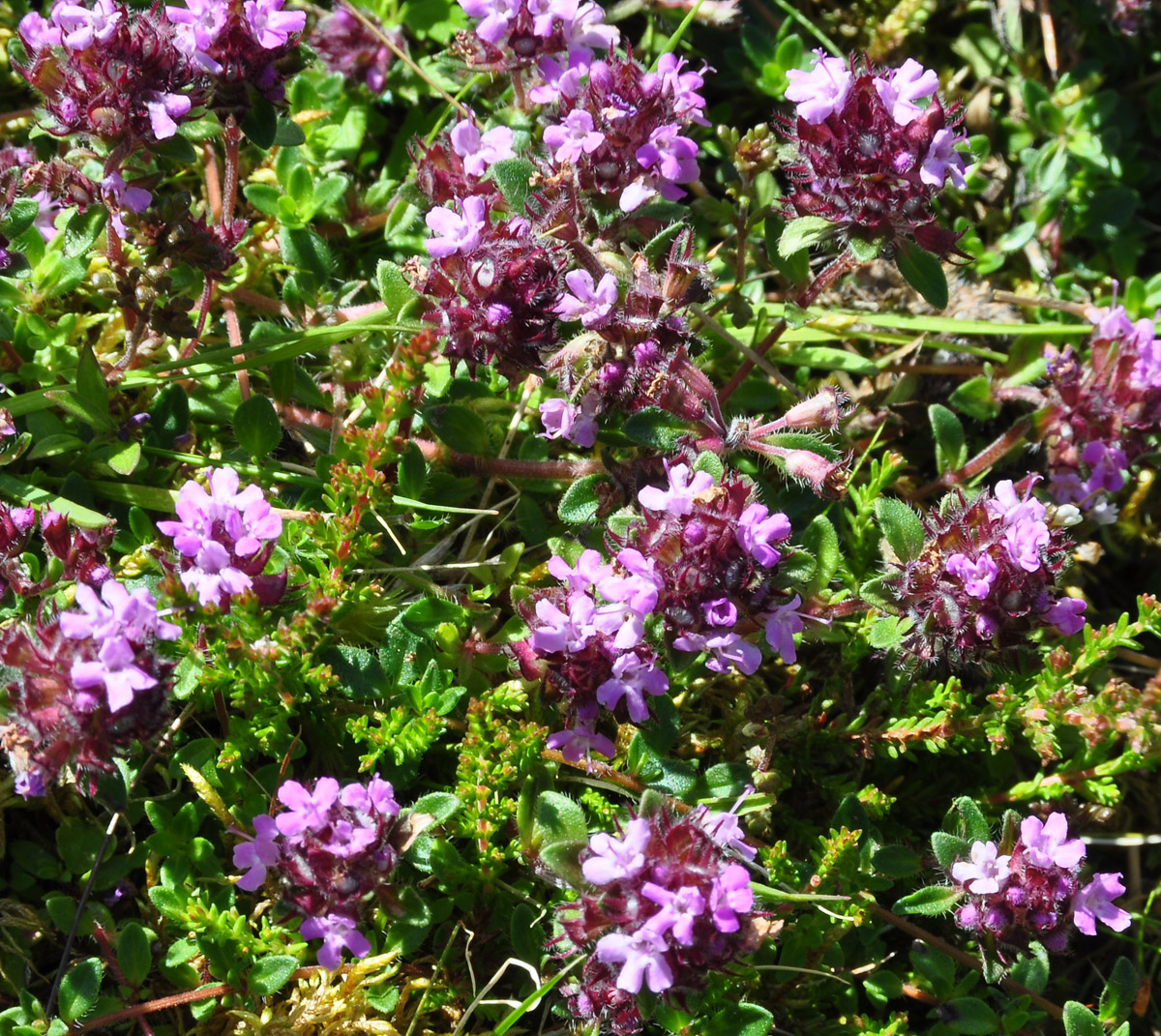 Slochd Beag looks short and steep from the north, but actually it’s longer and the path ascent isn’t steep at all. 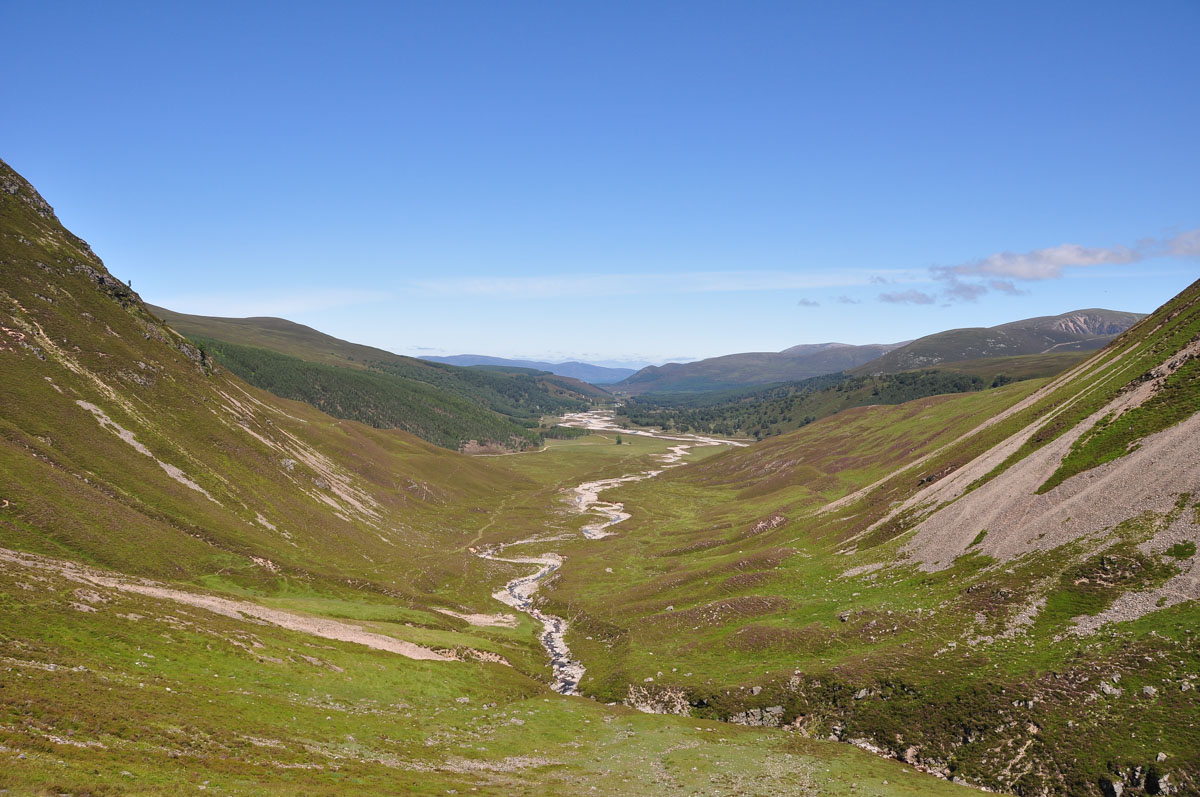 The Slochd is a work in progress – being carved by the runoff from the high ground. 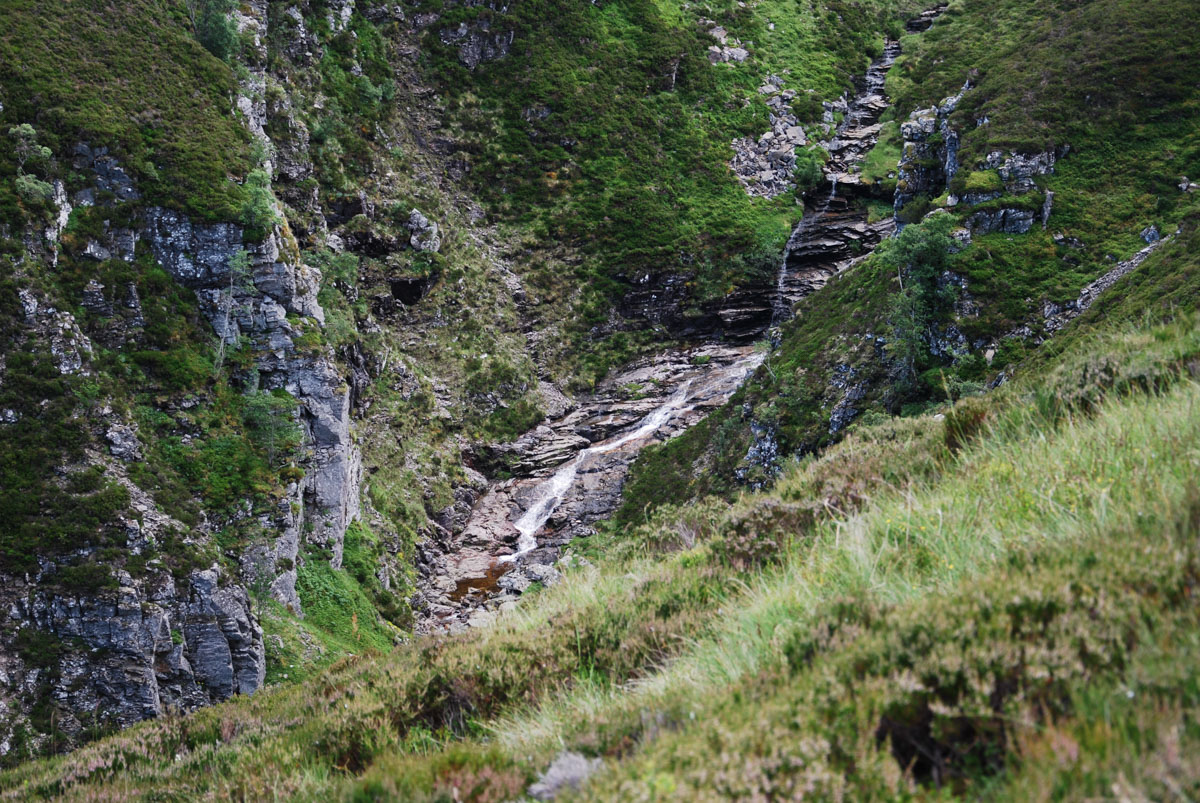 Once up above the Slochd the path follows Allt Lorgaidh along rather verdant high moorland. 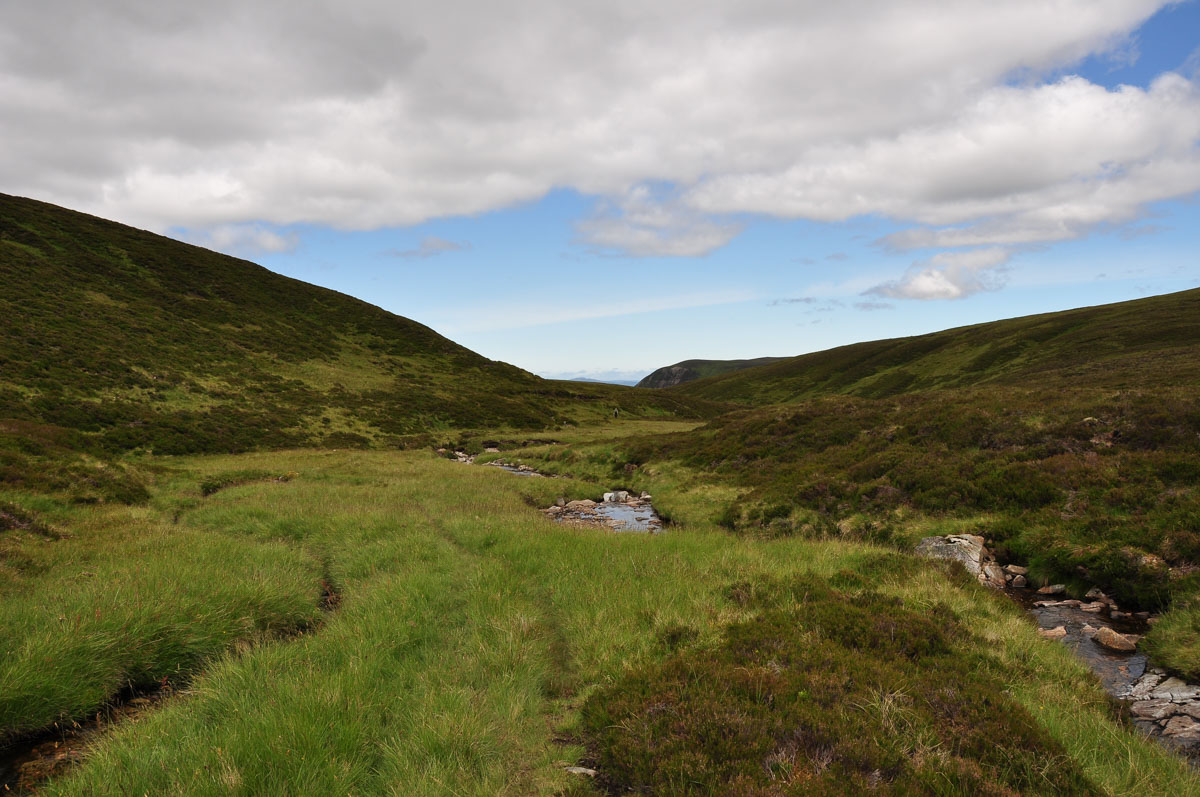 Although the path seems sketchy it’s well built – even little side streams are bridged. I wonder who built this. 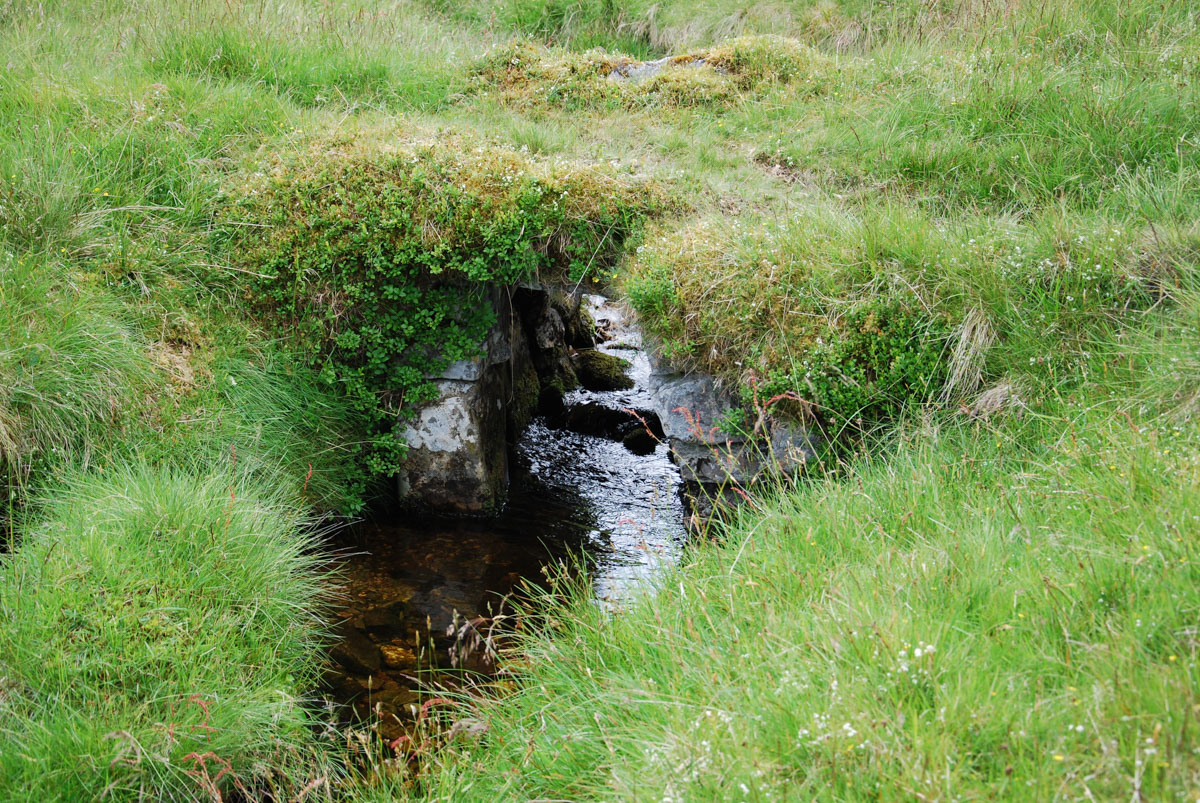 We cut off the path about 1km before its end to ascend Glas Leathad Lorgaidh. 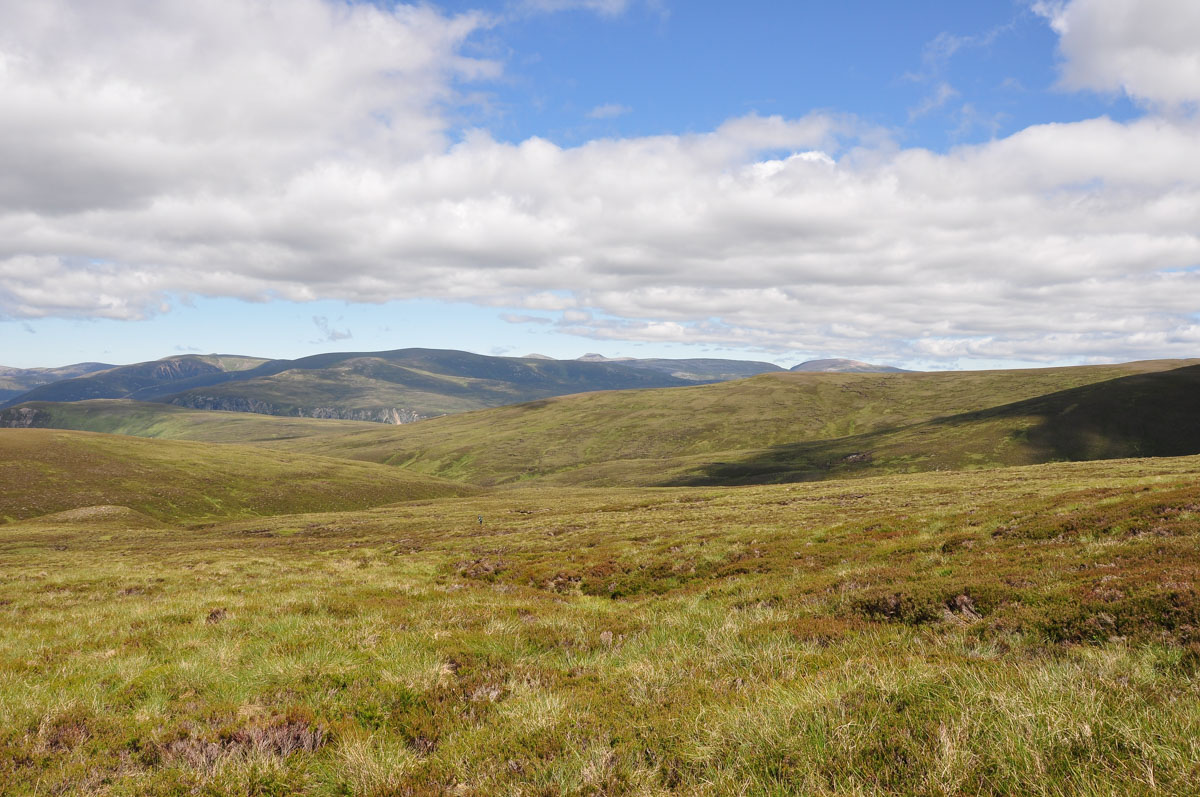 After curling round Meall an Uilt Chreagaich we headed up Leathad an Taobhain. This whole hinterland east of the A9 between Kingussie and Blair Atholl is an undulating upland landscape. KAKBA land so to speak.

To the east the Upper River Feshie is running east towards the Dee, before turning nearly 180 degrees to head WNW into Glen Feshie. The East view takes in Carn an Fhidhleir and Beinn a Glo. 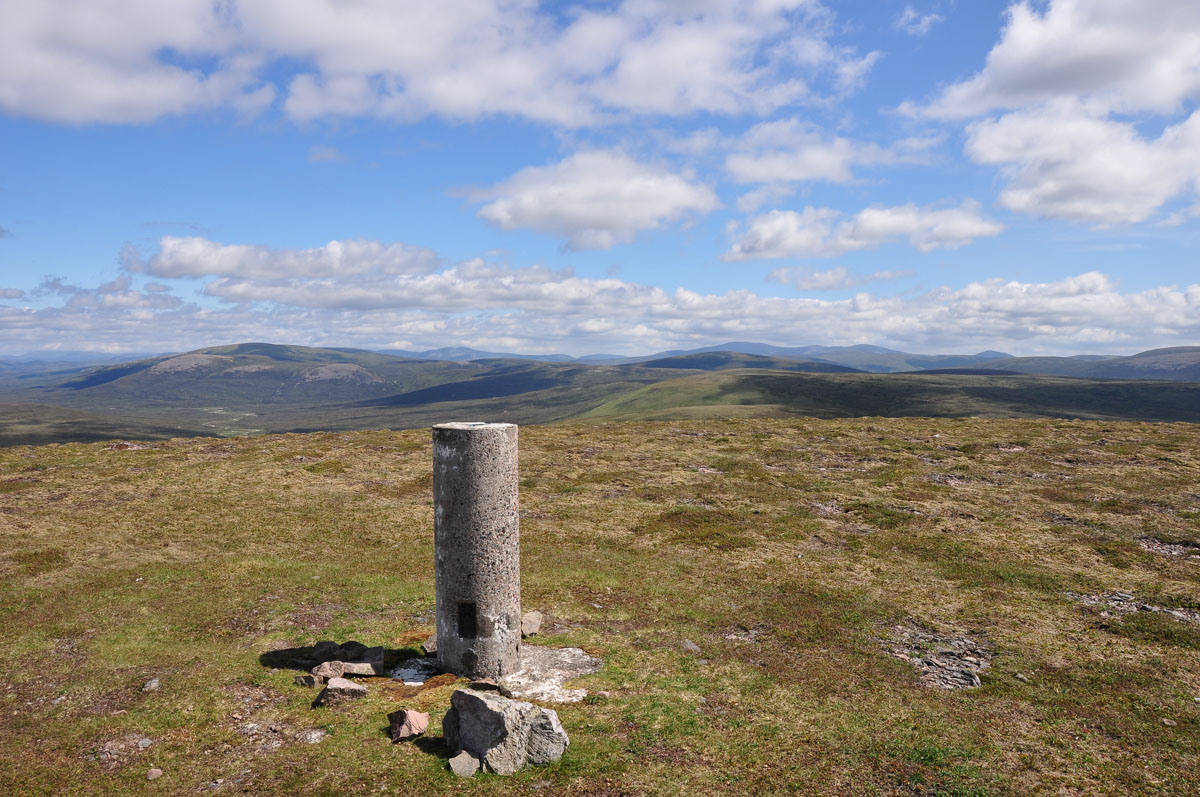 To the west Drumochter, Creag Meagaidh and Ben Alder are able to be picked out. 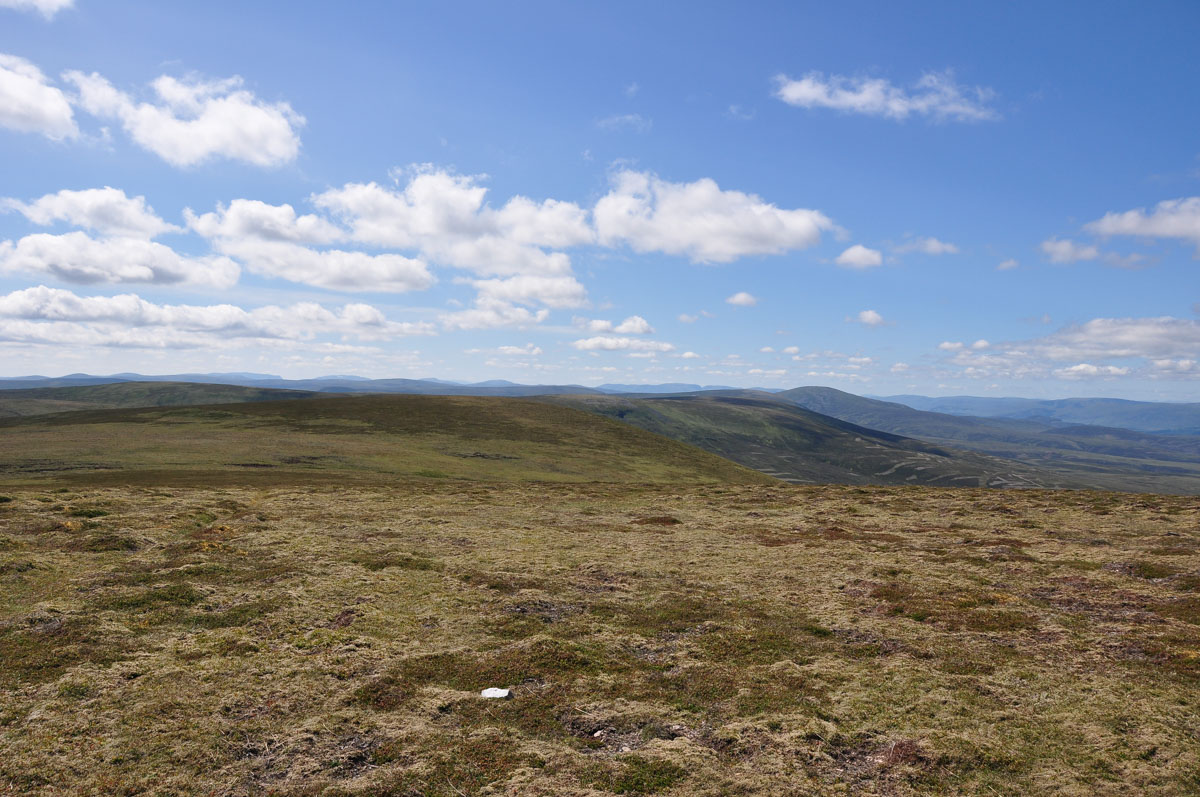 The Cairngorms look like a single mass, perhaps Cairn Toul standing out the most. 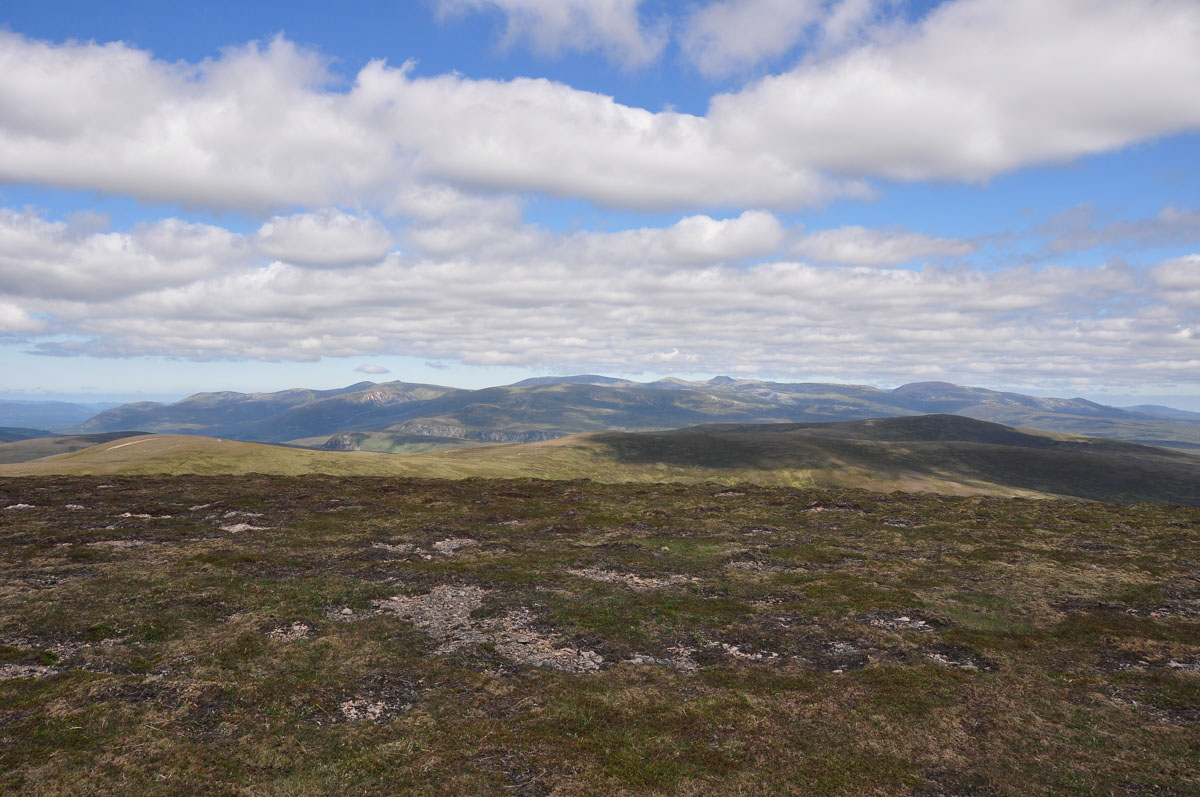 To the north Carn Dearg Mor on the west side of Glen Feshie looks prominent, with the further north away on the horizon. 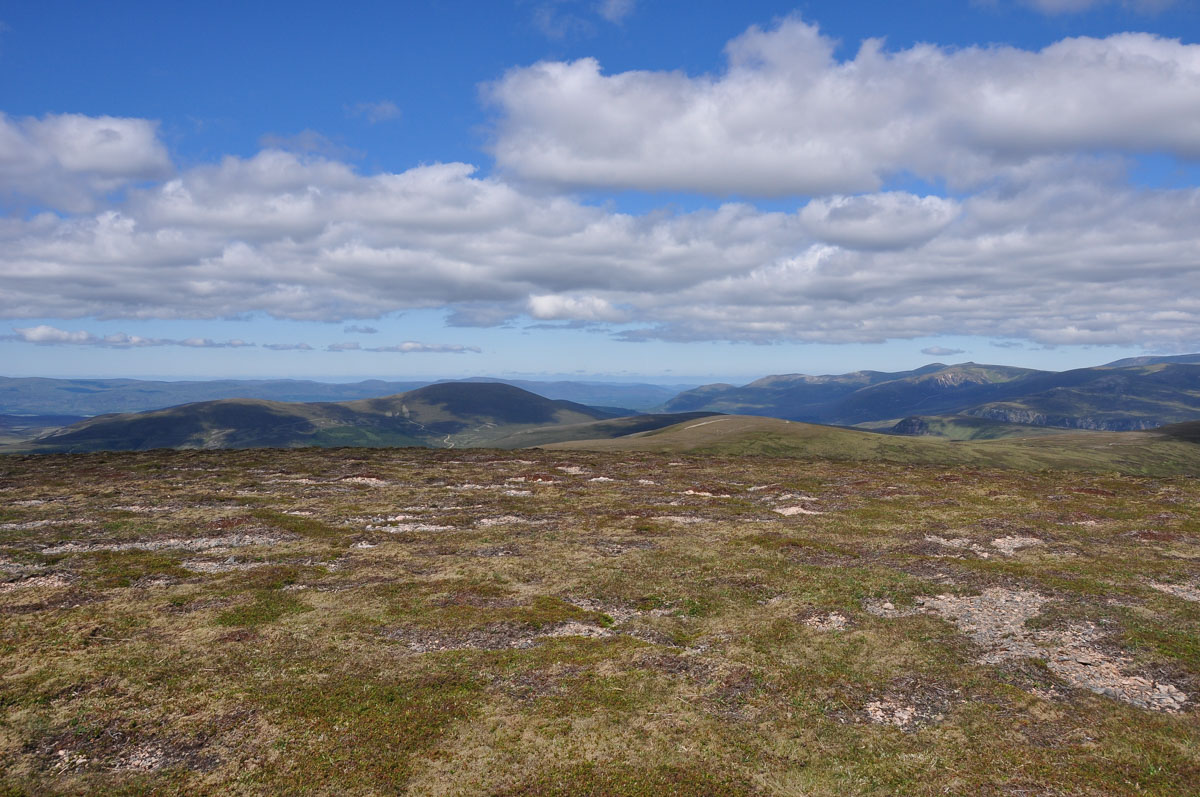 From Leathad an Taobhain we headed back north to Meall an Uilt Chreagaich and then on along the path to Slochd Mor to return to Glen Feshie. 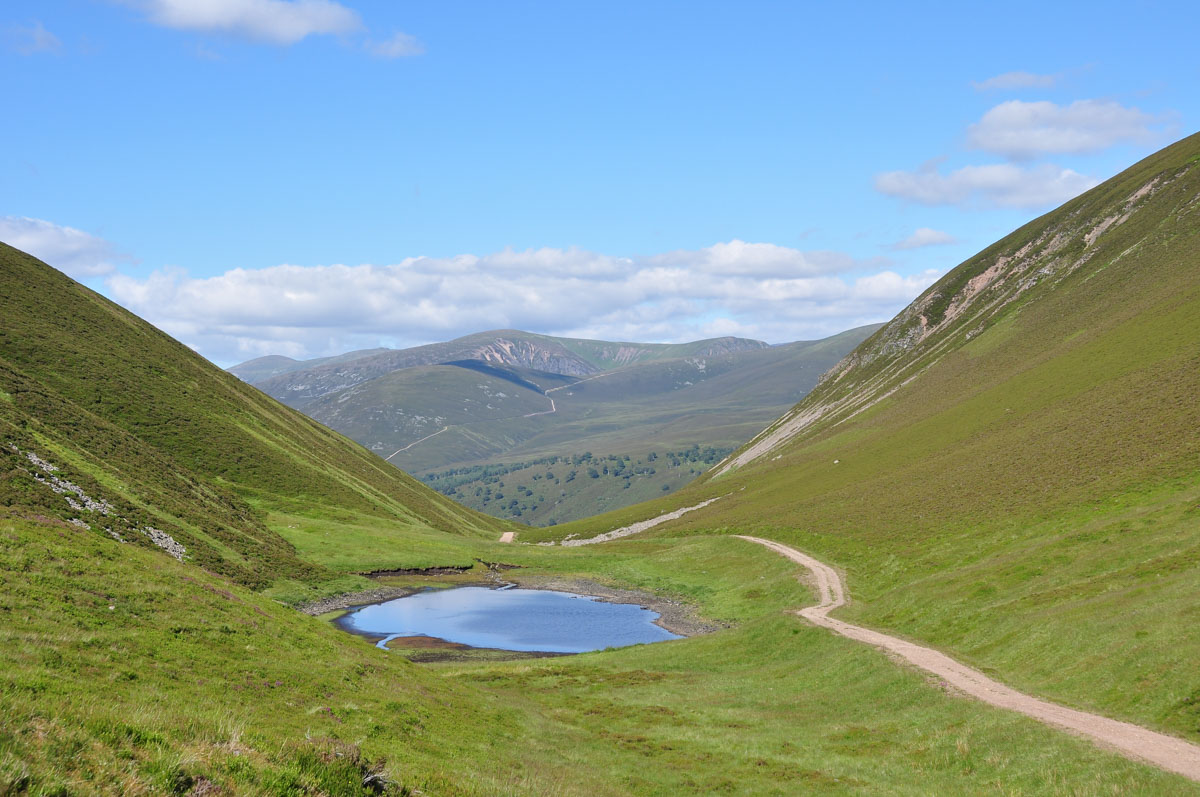 From there it was another few hours back up Glen Feshie to the car. Not a day to begrudge the walk though, can’t complain about a fine sunny day.

Looking back to route 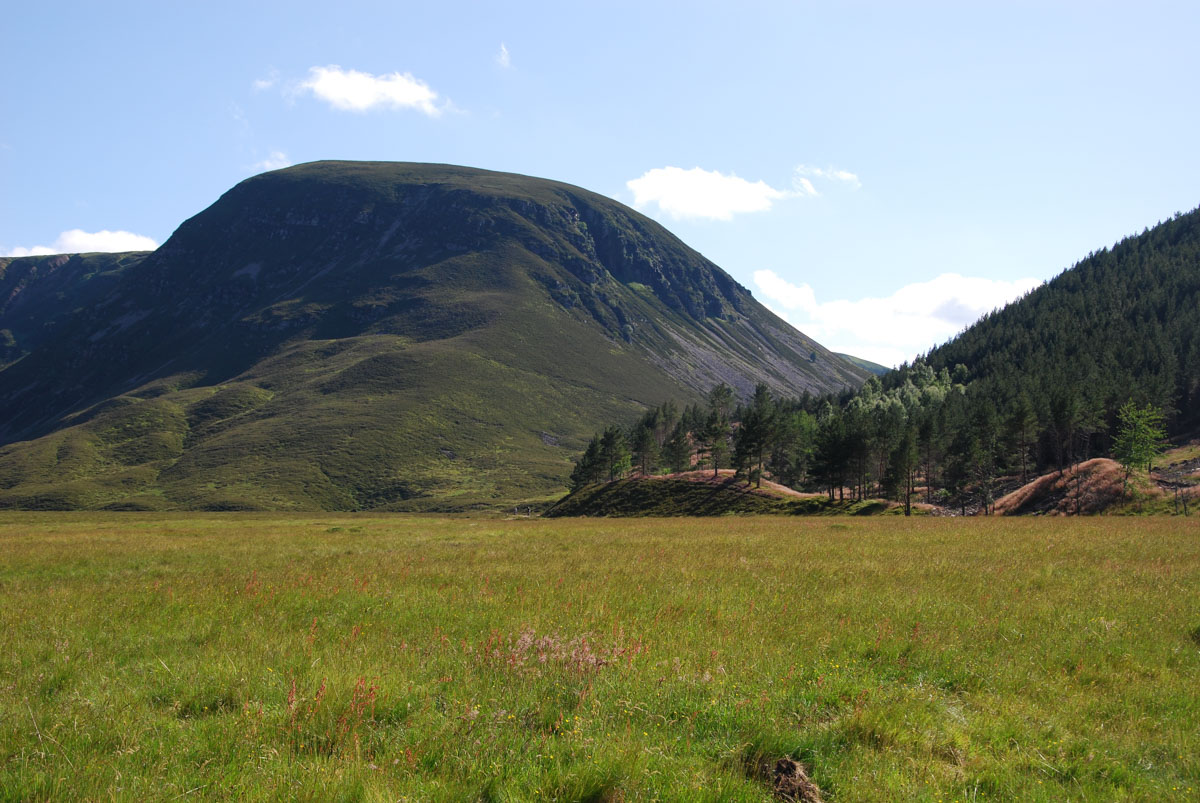 The ruin at Ruigh Fionntaig is set in an atmospheric location. Not a bad camp site. 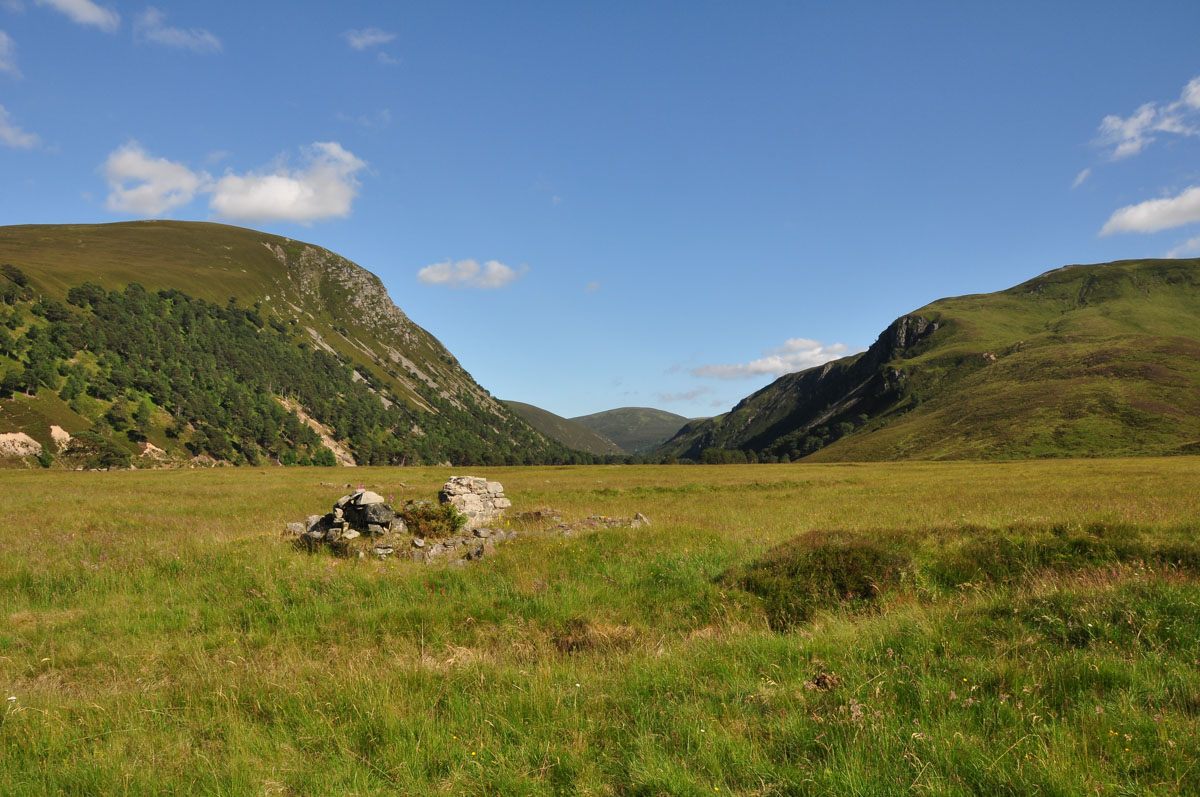 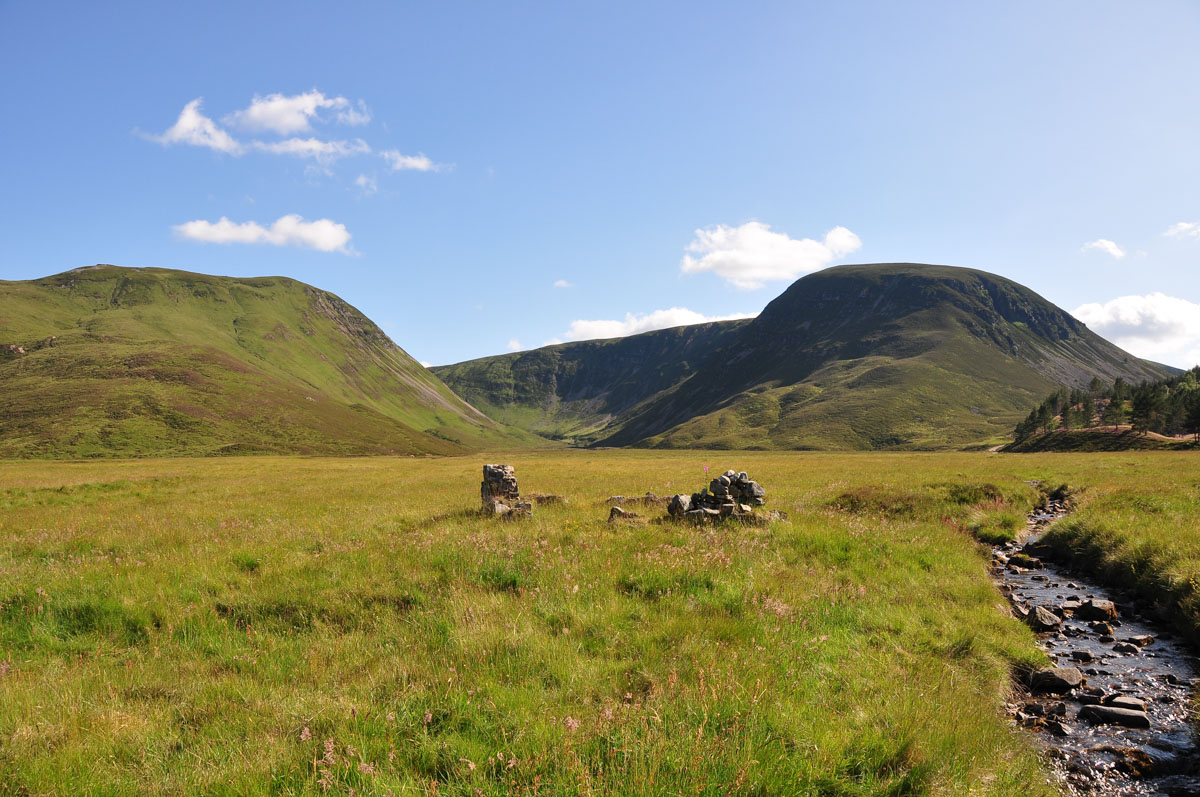 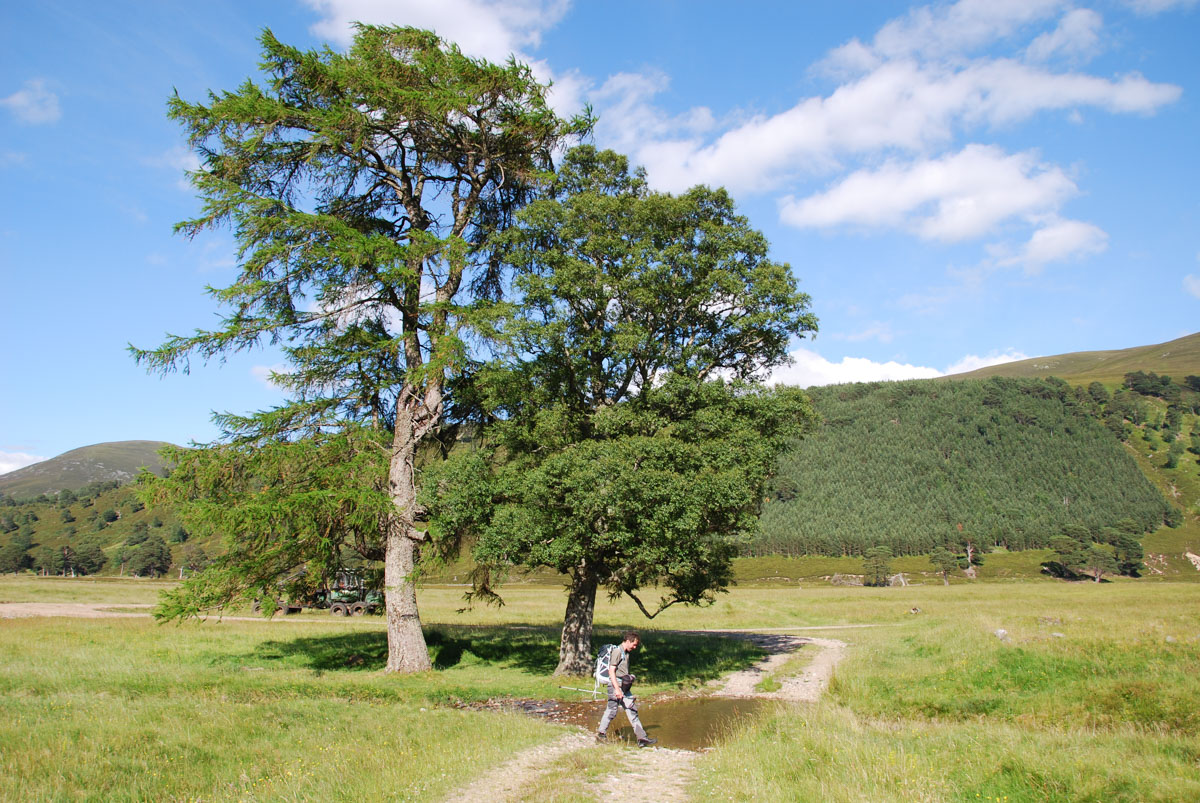 …and then the yomp home. H was regretting trying out new boots on such a long walk. 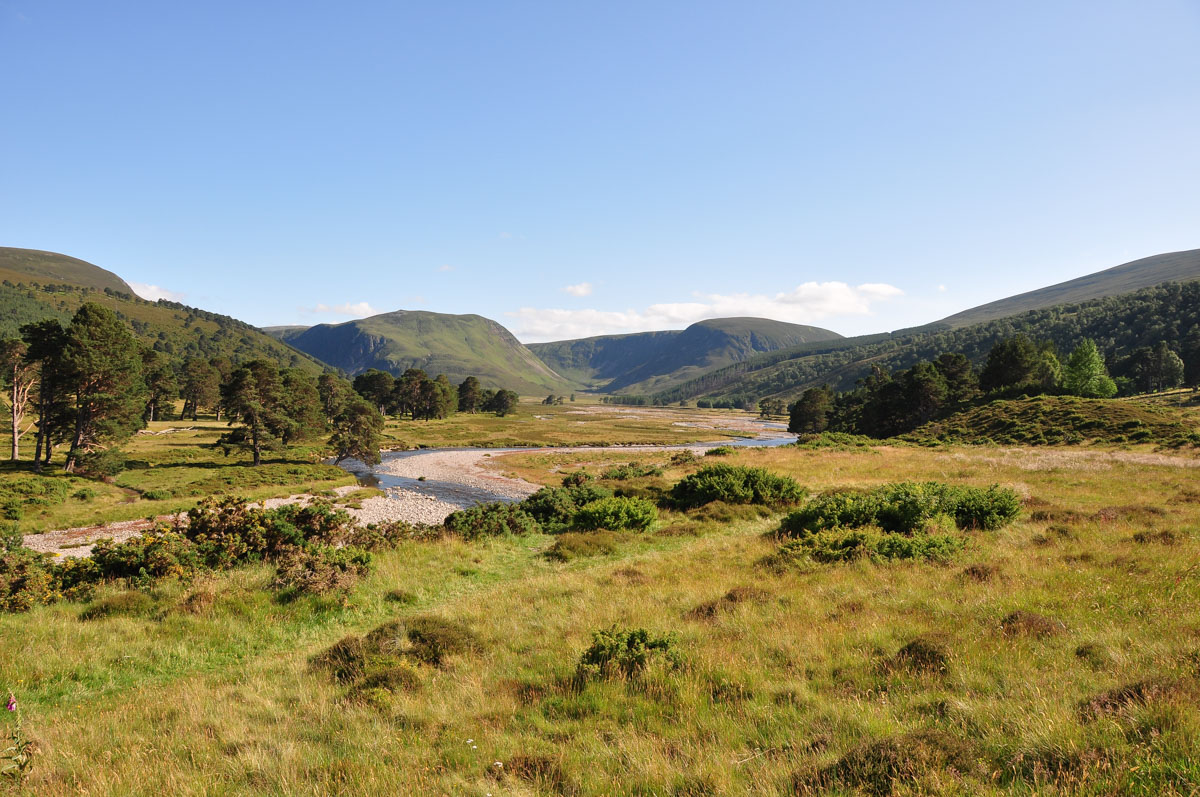 A cracking day – although the terrain is not awe-inspiring it is great stravaiging country. Well worth a return some day.