Day 3 of the Rum meet – a rather late evening (morning) meant getting up seemed a trifle difficult at 0730. Nonetheless we wanted to get out to Kilmory and take a look. Packed everything up and headed out at about 0900.

A pleasant enough day for a stroll, about 2 hours walk to Kilmory. We’ve been at the south end of the glen a few times but never headed north to the beach.
Kilmory Glen: 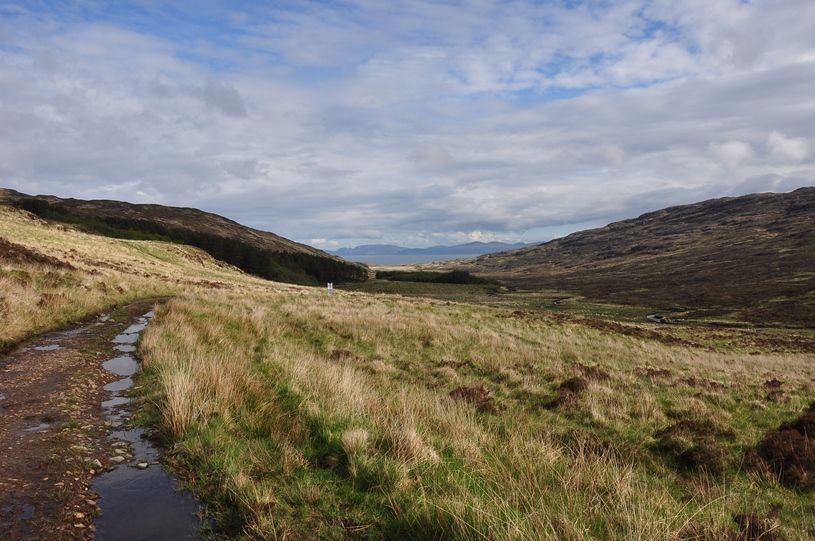 A nice wander past a number of birds and plants of interest. 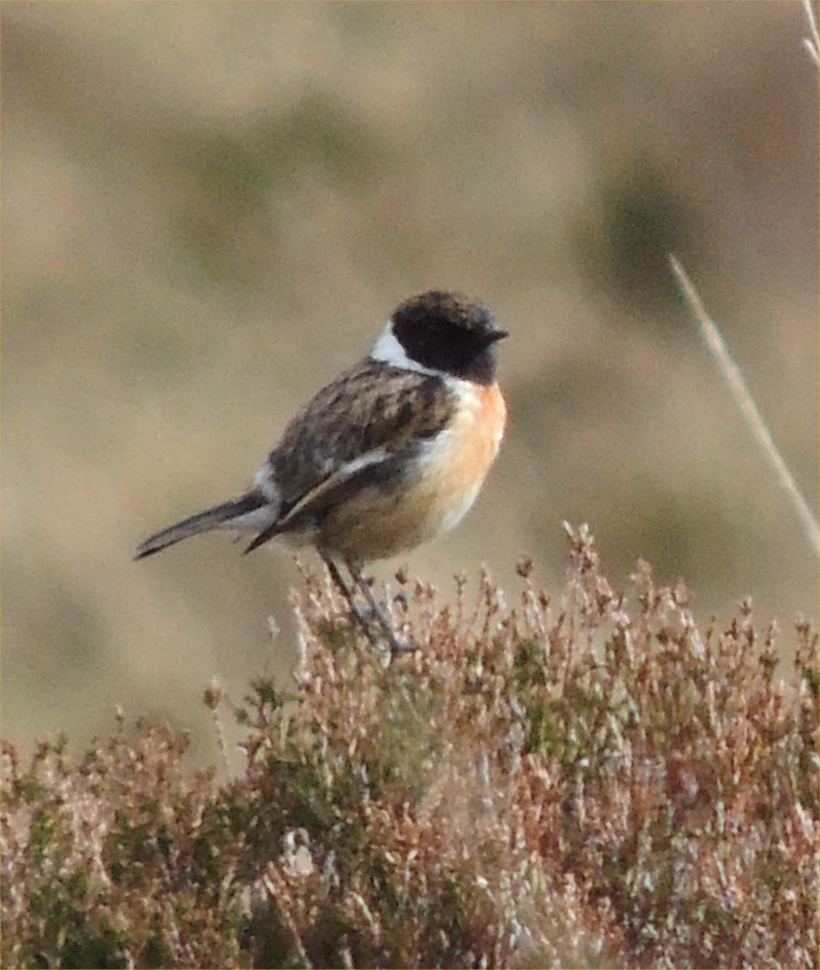 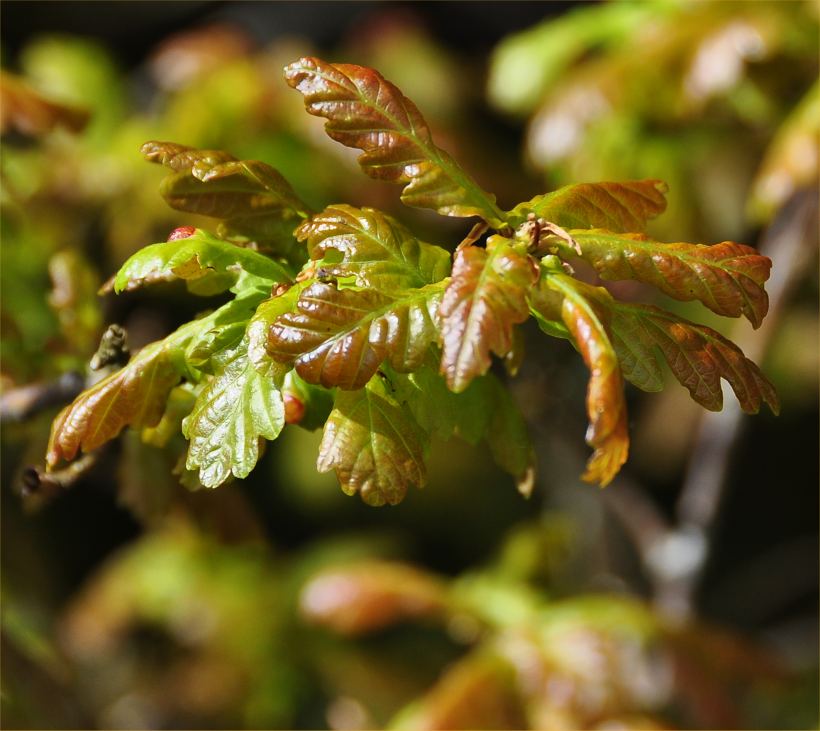 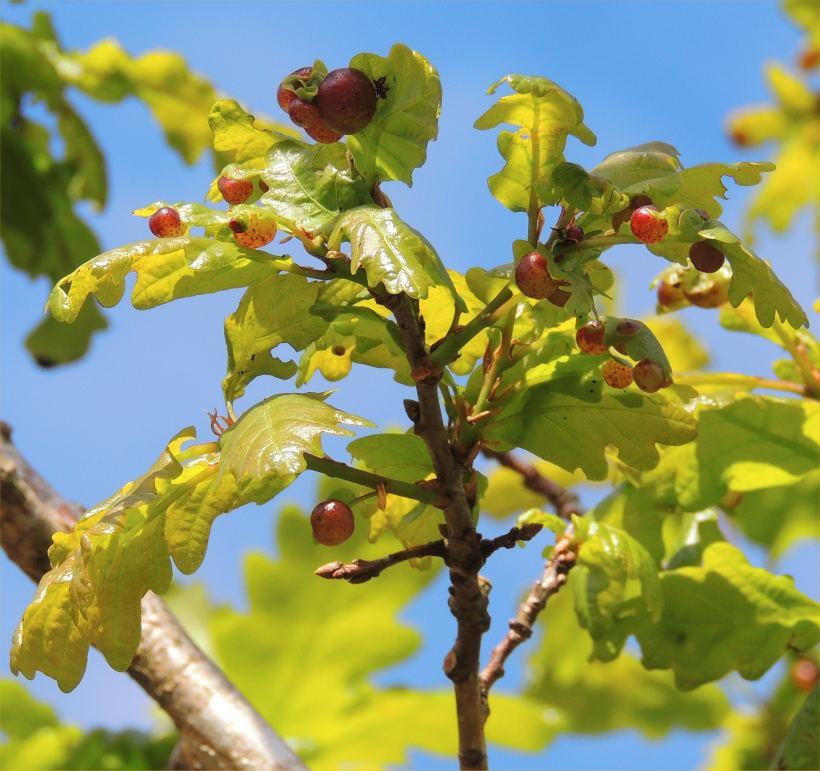 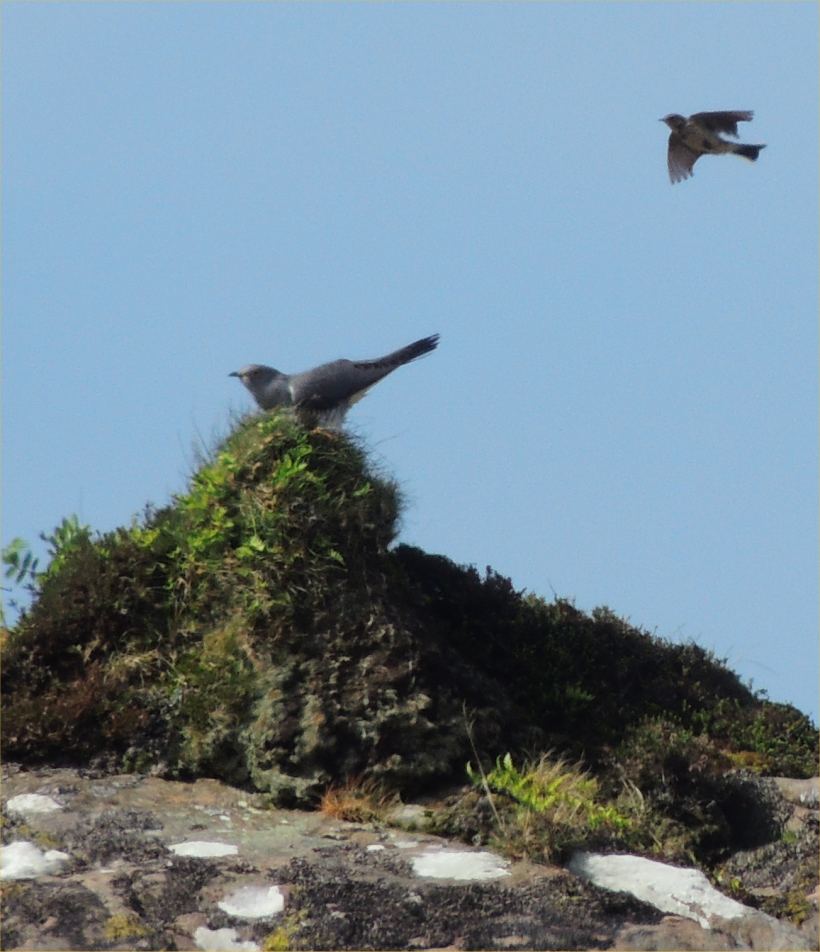 Arrived at Kilmory at 1100 – an attractive place with the remains of an old village and a graveyard. 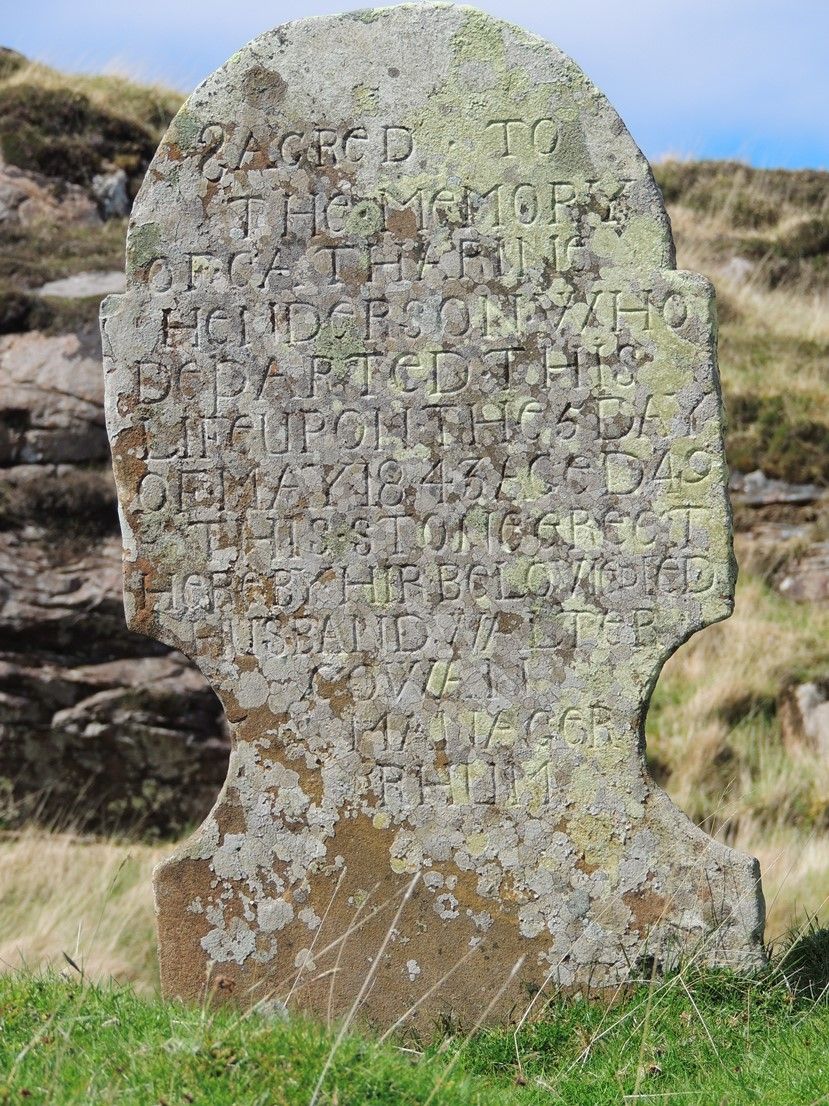 The beach and view was what we had come for. 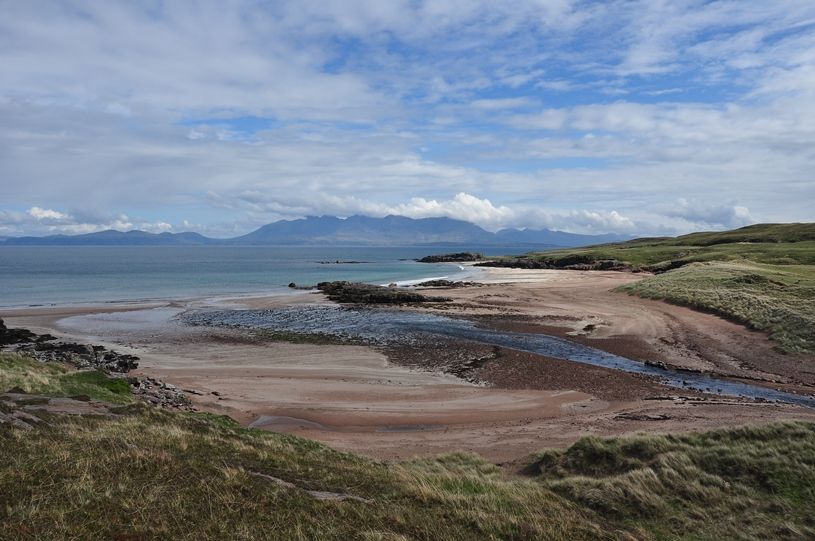 A fair number of deer in the study area. 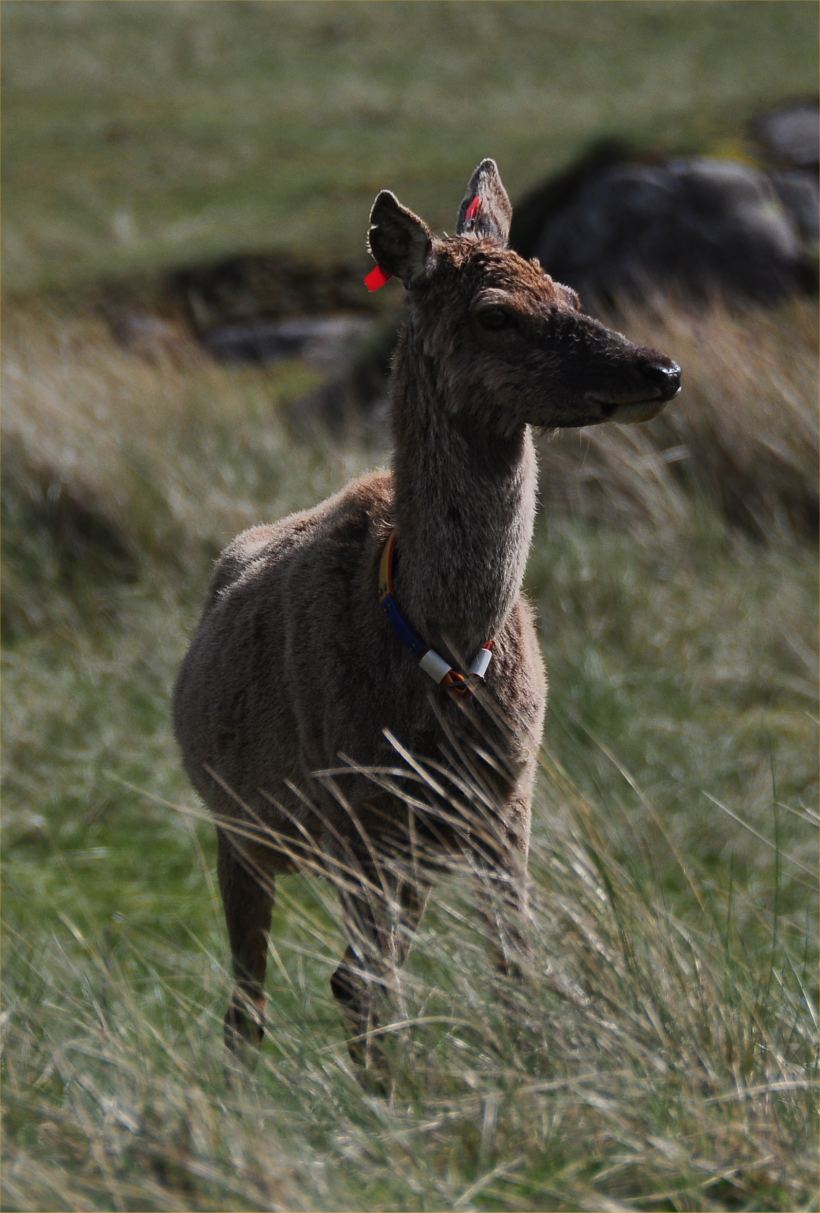 The beach has a cracking view to Skye and has eroded and weathered areas of Torridonian sandstone that Adrian had mentioned in the hostel. 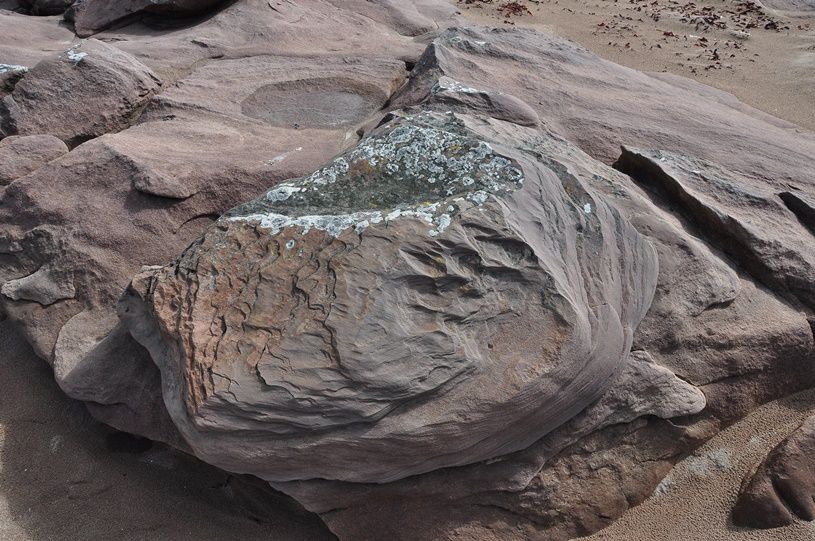 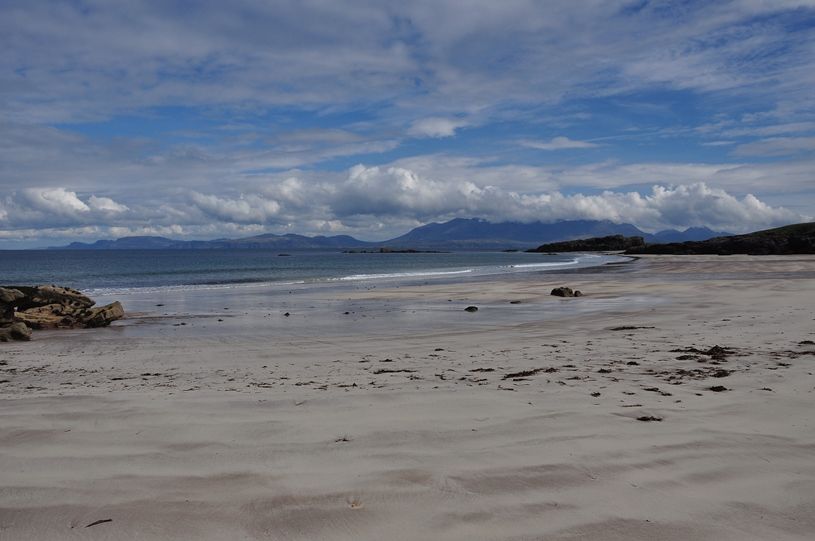 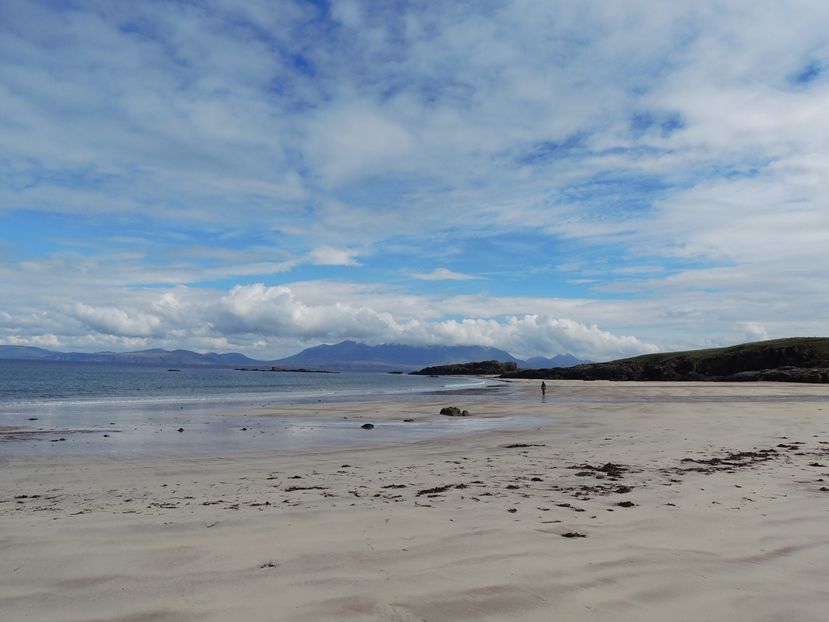 Identified a cracking tent pitch site for future reference and headed out onto the sandstone for a seat and lunch with a view. 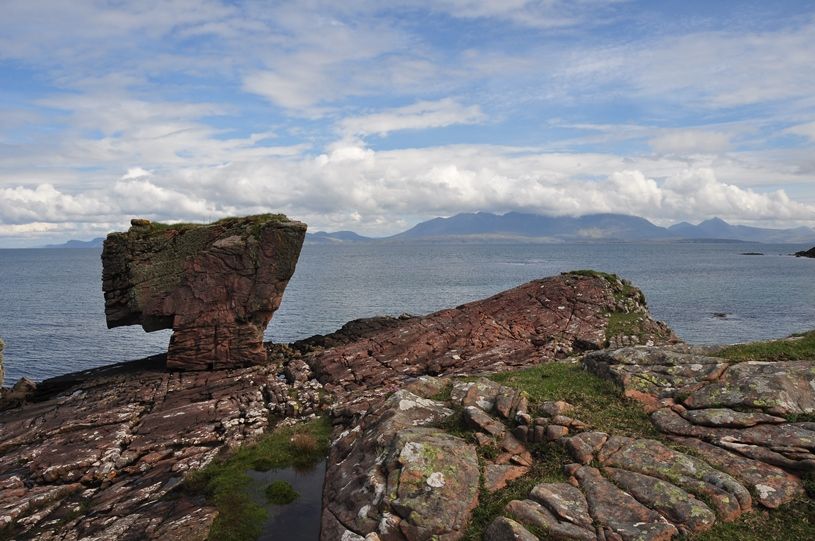 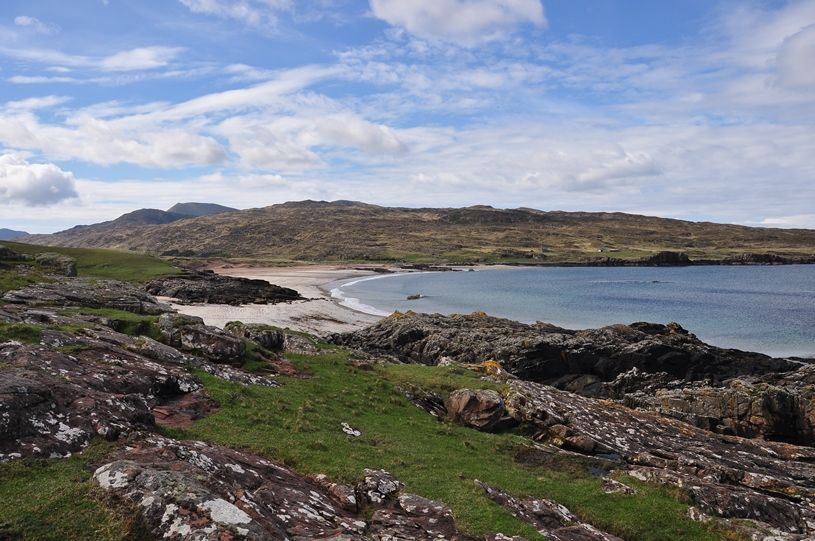 I’m looking forward to spending a day or so around this area – looks fascinating. 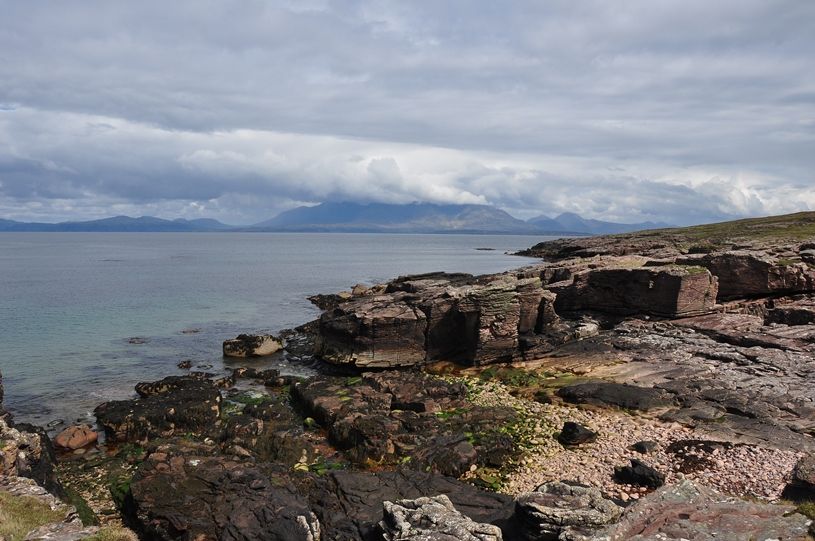 Small flotillas of eiders were working the near-shore, substantial kelp beds look like an ideal otter habitat as well. 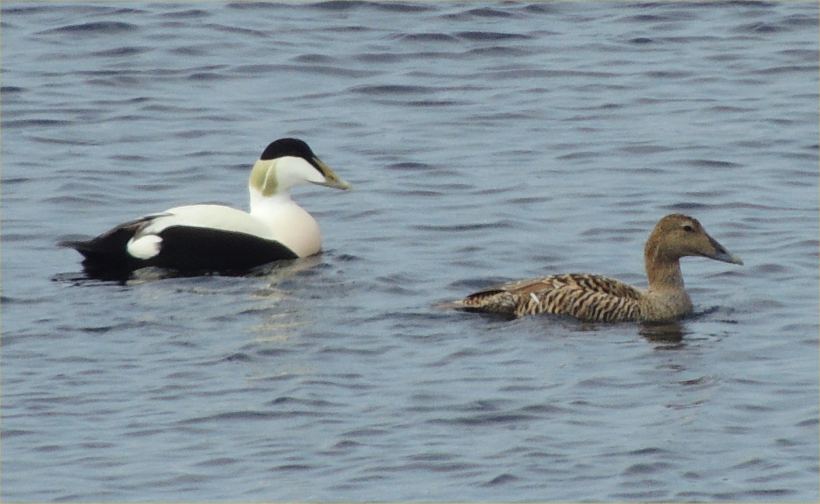 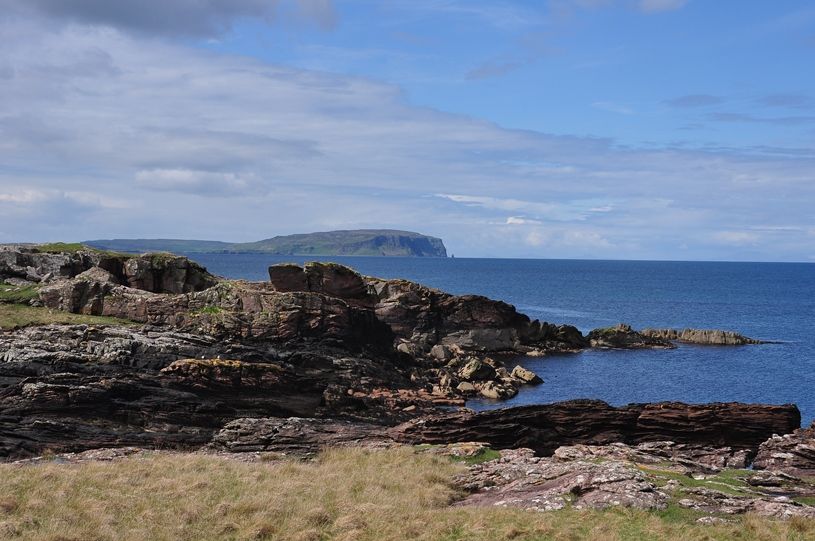 Bumped into Adrian who was enjoying the Torridonian sandstone beach, wandered back to Kilmory and bumped into ProfRob who had strolled over Mullach Mor.

Accompanied them back to Kinloch to catch the ferry home. Always a bit of a downer, leaving Rum. 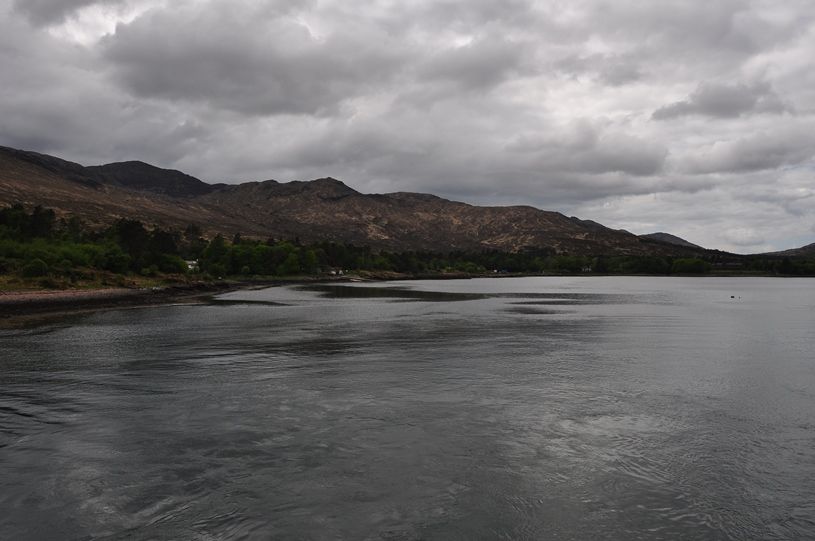 Still, the Monday ferry is a cracking wee cruise home via Eigg. A number of dolphin were spotted off the ferry on the Rum-Eigg leg. 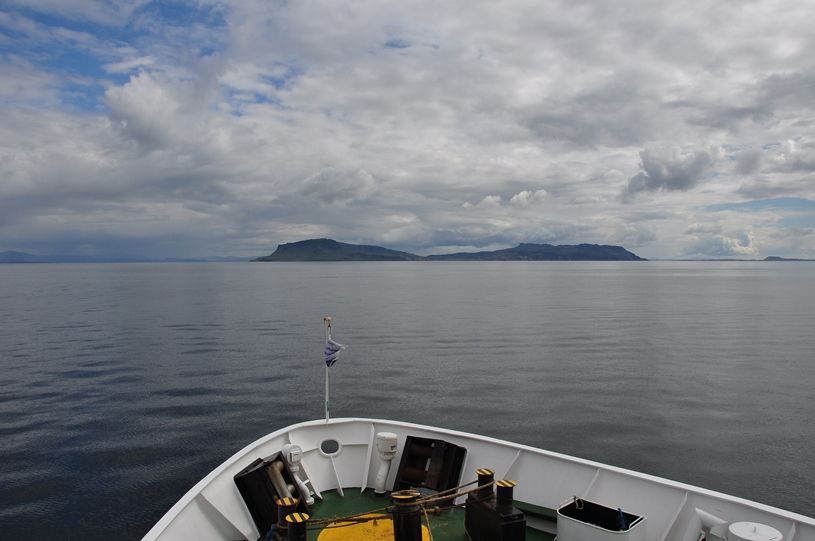 Although almost completely dry on the ferry run it looked as though the onshore weather was a little more mixed. 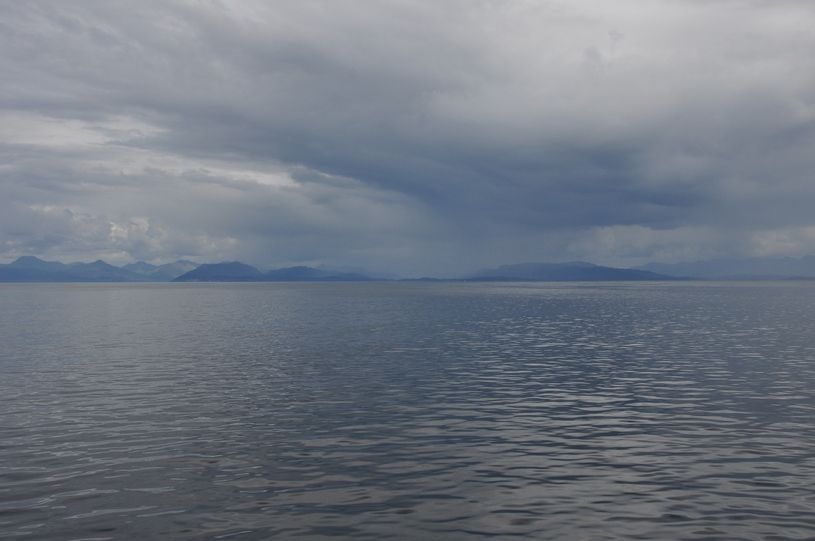 An Sgurr comes into view: 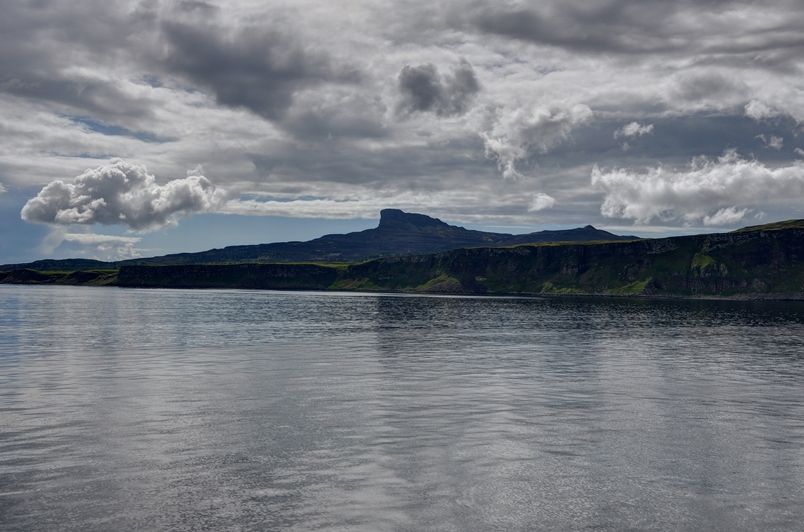 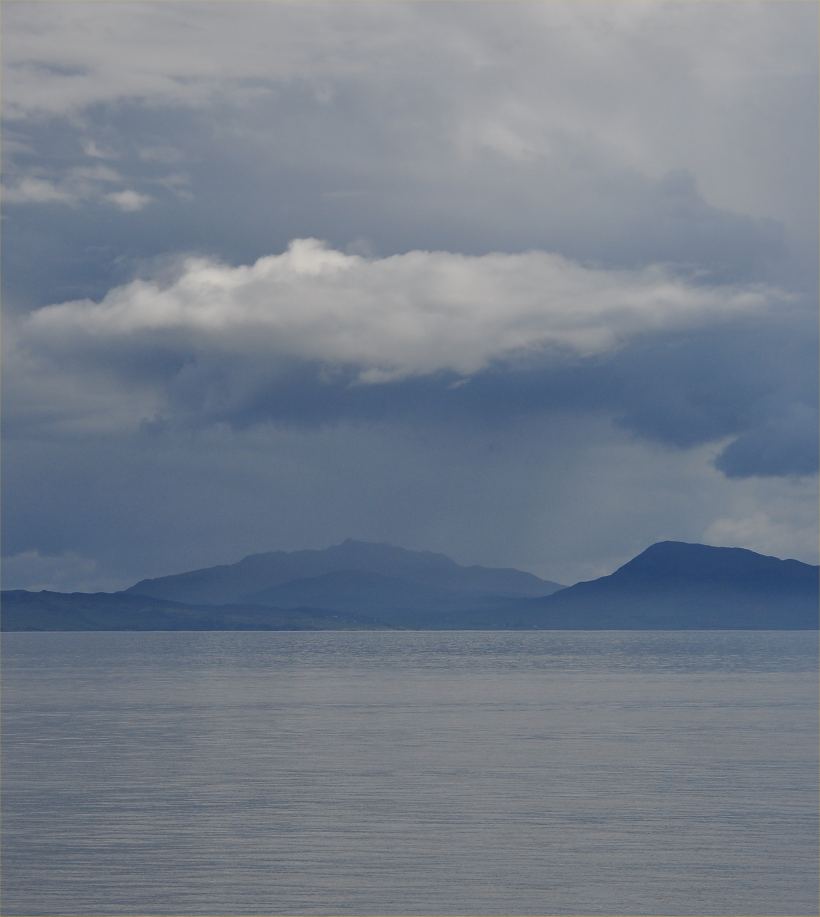 Docked at Eigg and said tarra to my parents who were stopping for a further night on Eigg, much to the envy of many.

Also a round of applause for Martin and Graeme who had kayaked from Rum to Eigg (an effort which saved them 25p each on their ferry fares 😉 ).

A very tempting view from the ferry at Eigg.

An Sgurr from MV Loch Nevis: 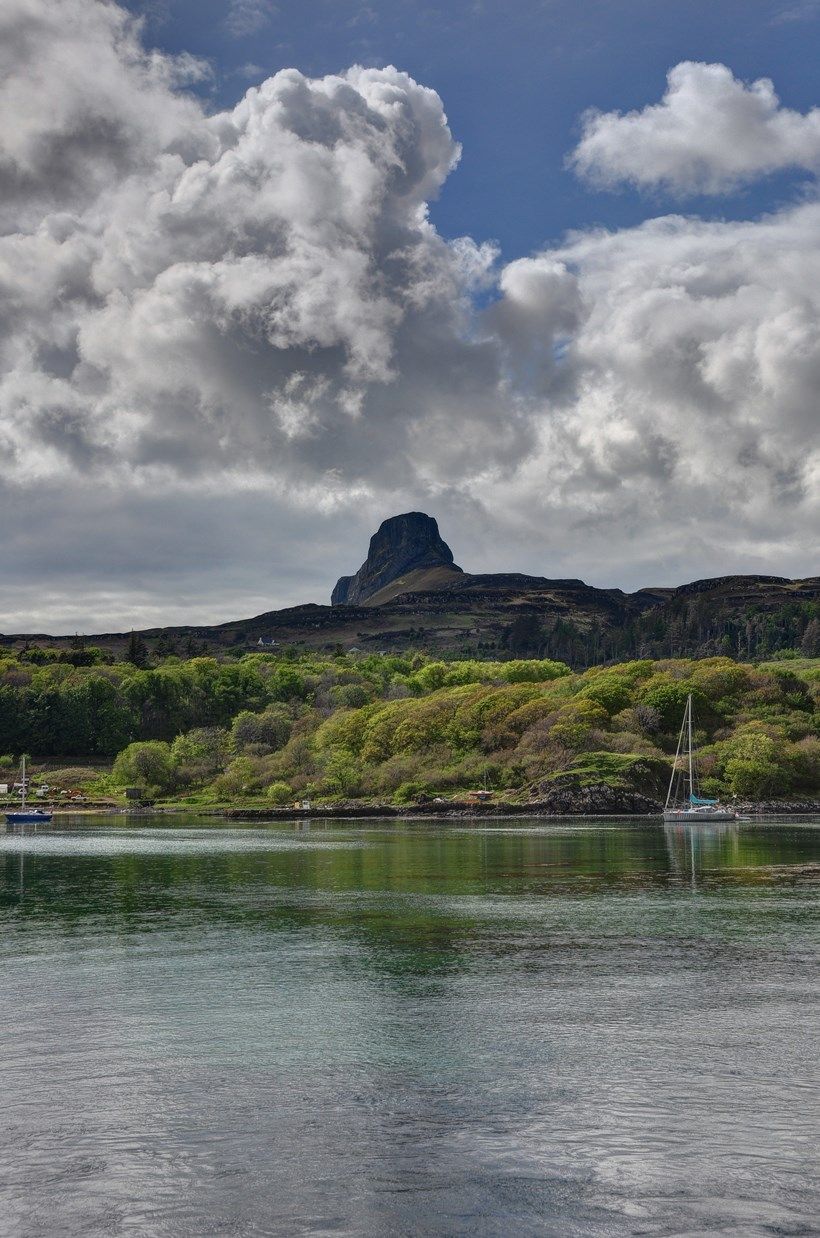 …and then to the final leg of the Rum meet, a chance to have a final natter with a few SHillers. 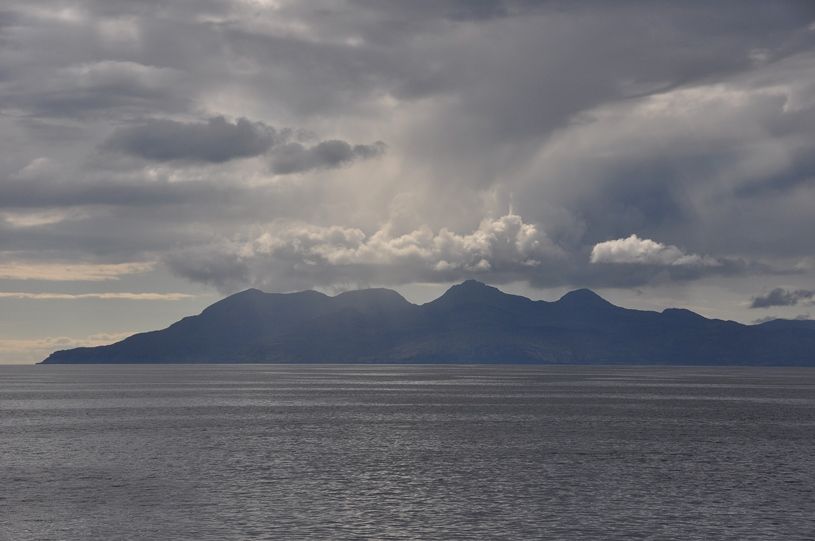 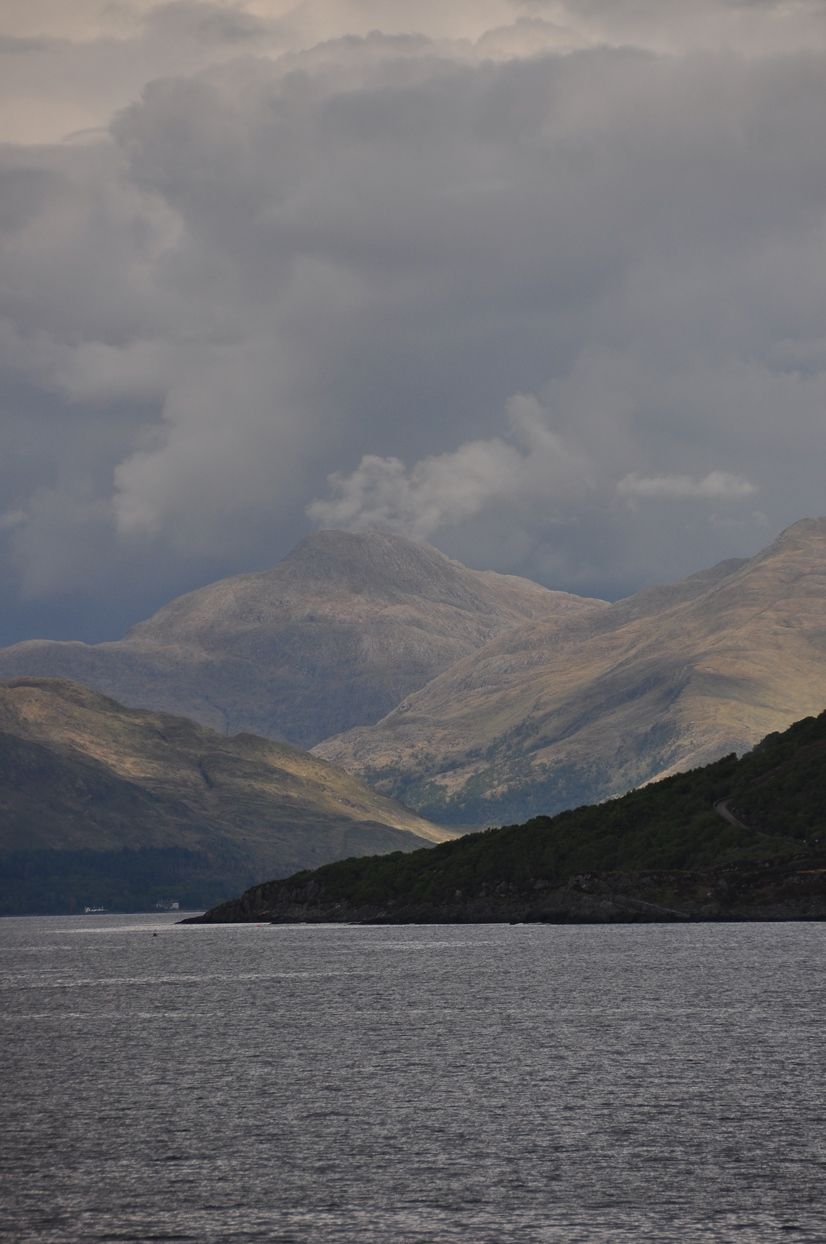 All in all another cracking Rum trip, with the luxury of a roof and a fine bunch of folk to talk to. 🙂