Weather forecasts suggested the NW Highlands would get the best of any sun on Saturday. Decided to head up to Inverlael and try out the West ridge of Beinn Dearg.

A very fine group of hills the Dearg group – but one we’ve neglected in favour of Fisherfield. The northwest ridge of Beinn Dearg has been on my mind since our previous visit in 2005. Back then with only a couple of years’ experience we were somewhat more wedded to described routes and paths – I wasn’t quite sure how we’d get on/off the ridge.

A few hundred Corbetts/Grahams/S2ks has seen us separate from our predilection for paths. 😉

Not too much to say about this route – followed the Glensquaib track out to the forest edge at NH 214 850. Forded the river and headed upslope on heathery ground to the northwest ridge. From there headed up towards Beinn Dearg (returning the same way).

Beinn Dearg was mist-wreathed at dawn from the river crossing: 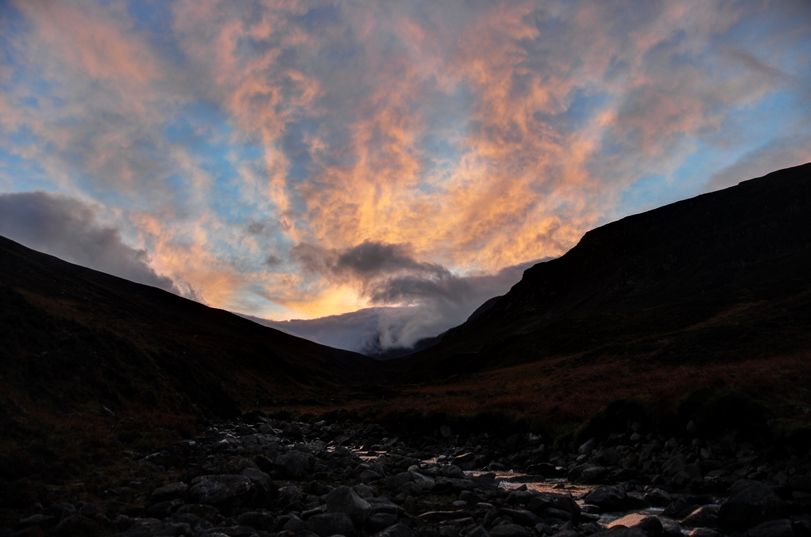 Once on the ridge there are views to An Teallach and Fisherfield (and out to the cliffs of Lewis). The wee nubbin Srone Nea looks worth a wander sometime. 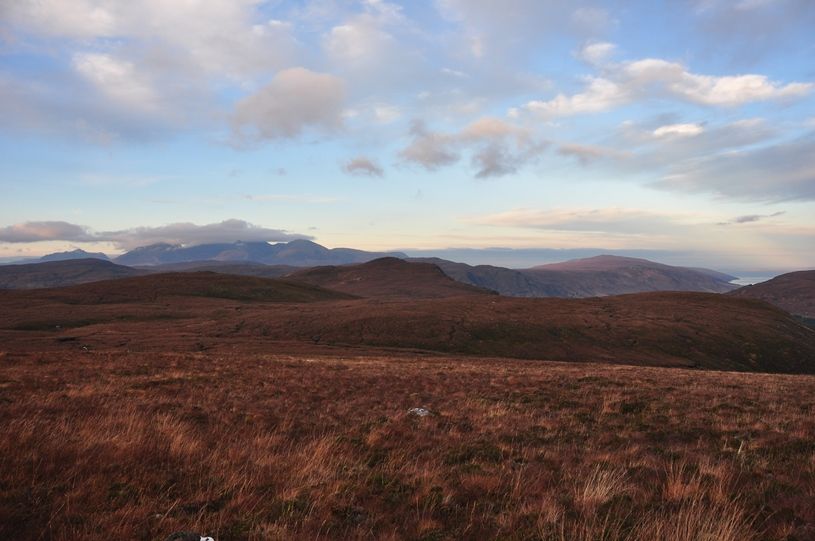 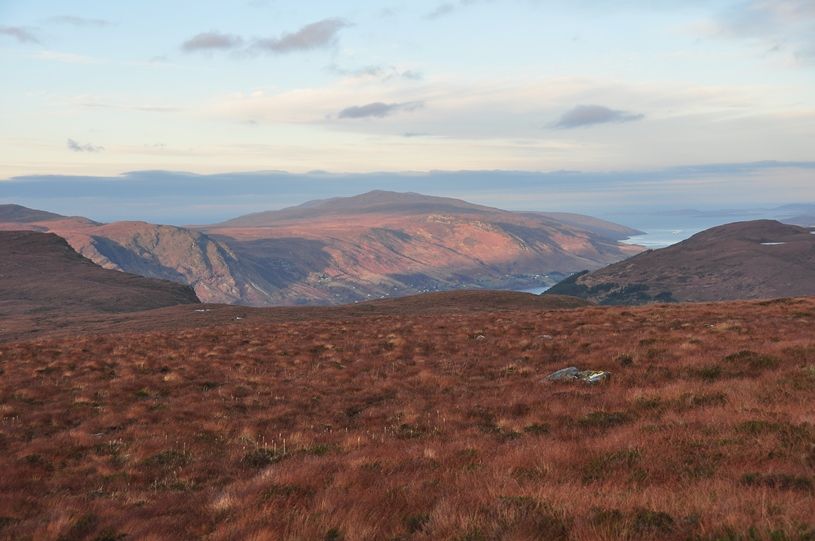 H with Assynt beginning to appear: 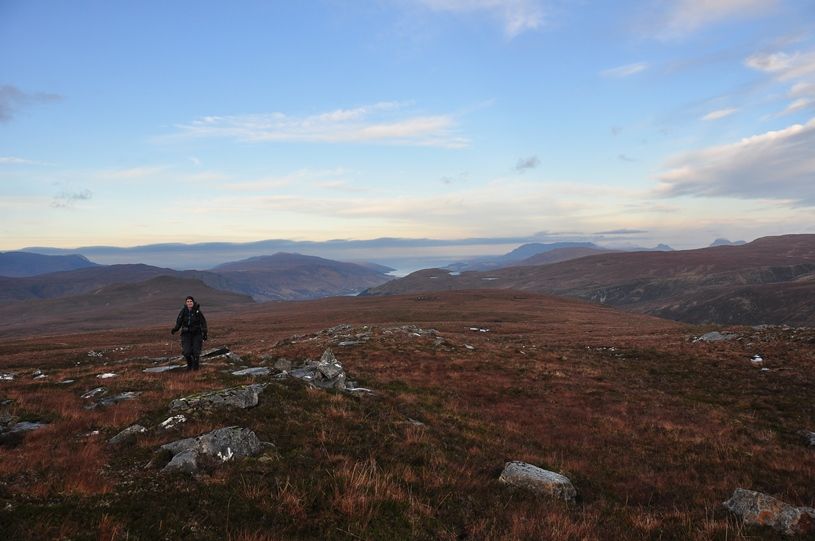 The cloud was flowing up and over Beinn Dearg and Beinn Enaglair: 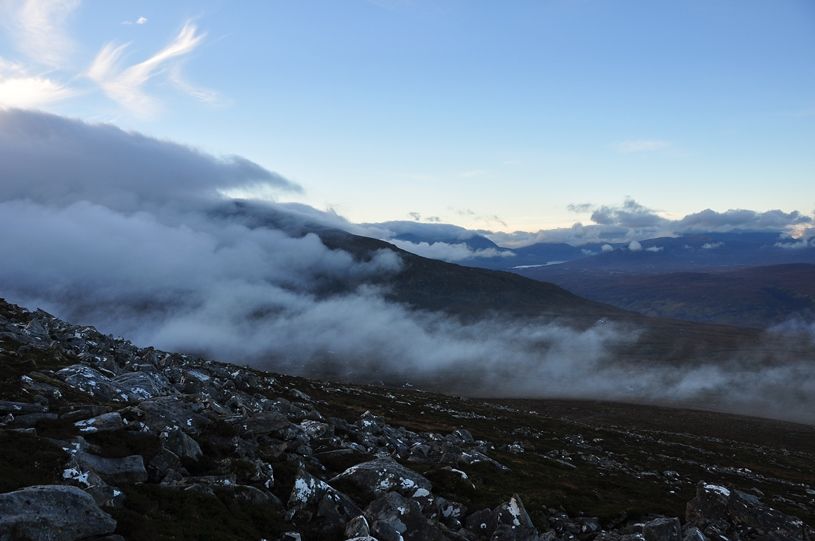 Ullapool was sunny – the ferry was loading for the sailing to Lewis: 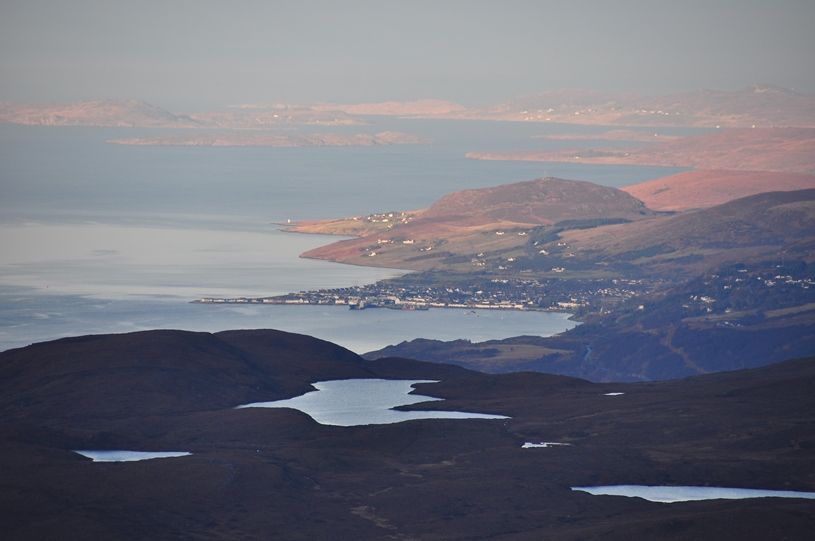 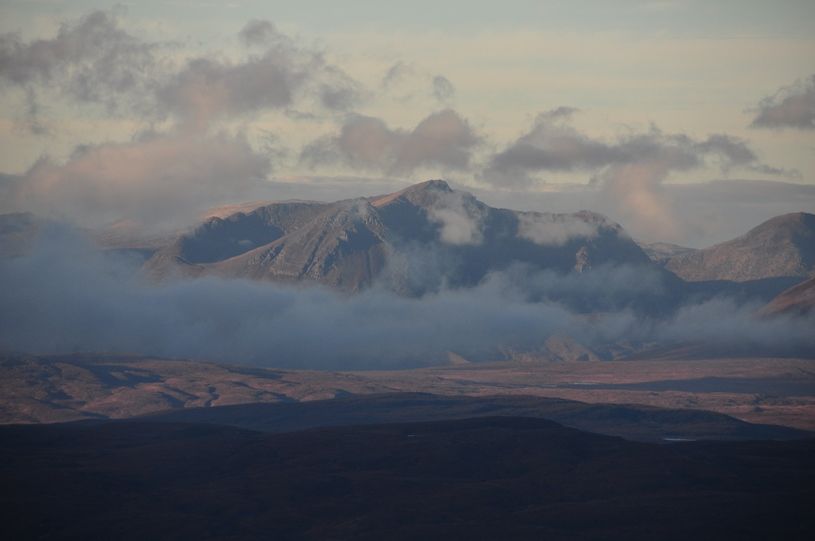 We headed into the mist and up the Famine Wall to the 836m top. Carried on a short way up the last pull to the summit but decided to turn around and see if we could get a seat with a view back down the ridge out of the clag.

Clag broke below the 836m top. The Famine Wall is rather impressive – just under 6ft high and bulky. Some amount of hard (and skilled) labour. 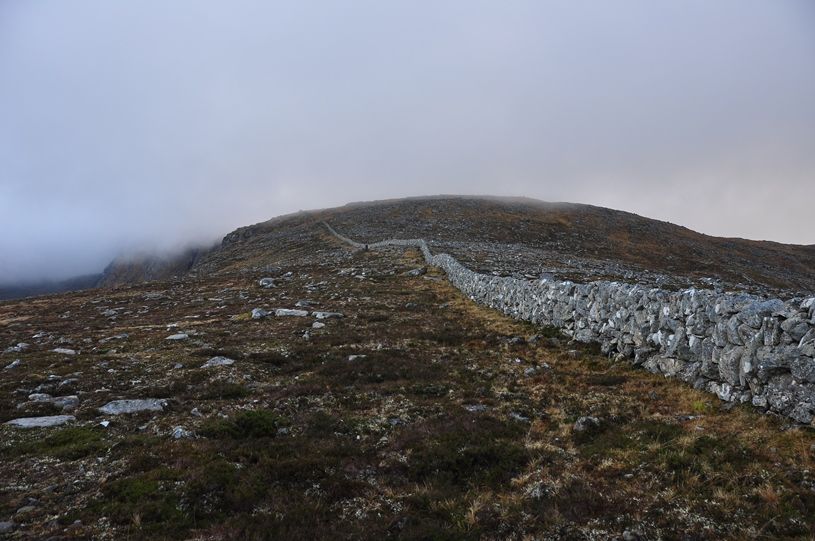 We were fleeing the shadow of our over-arching cloud: 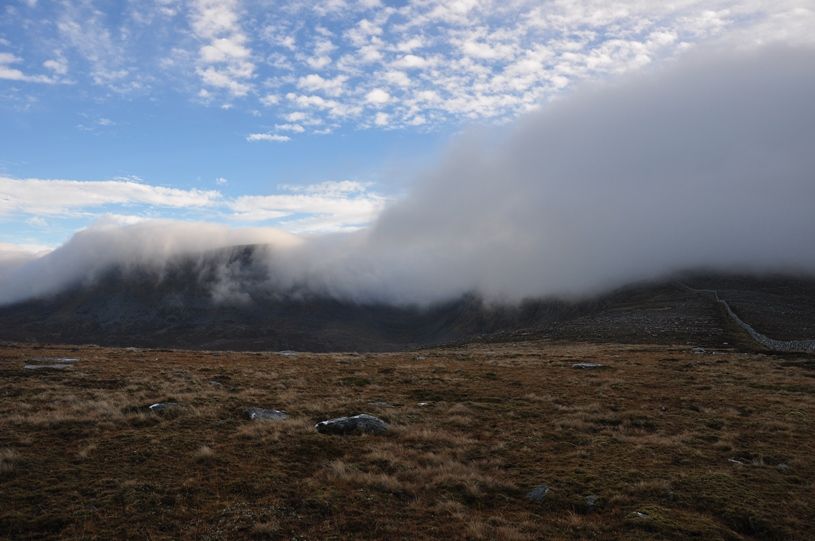 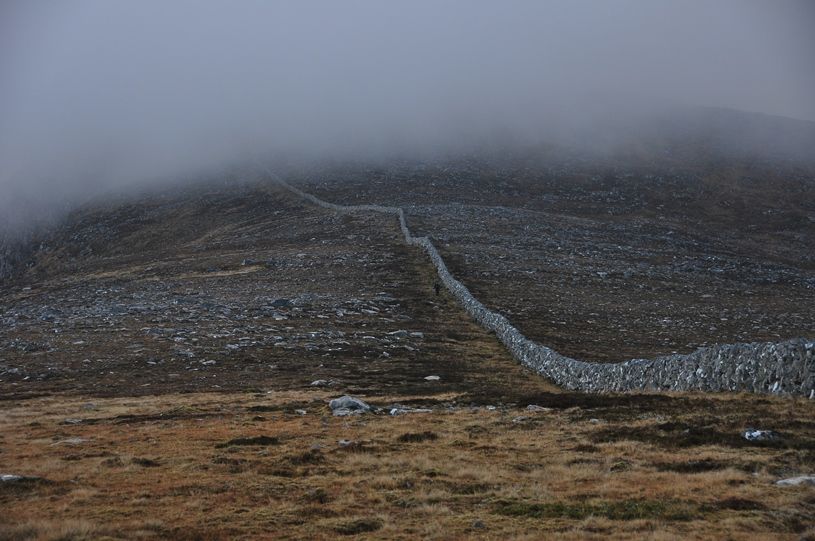 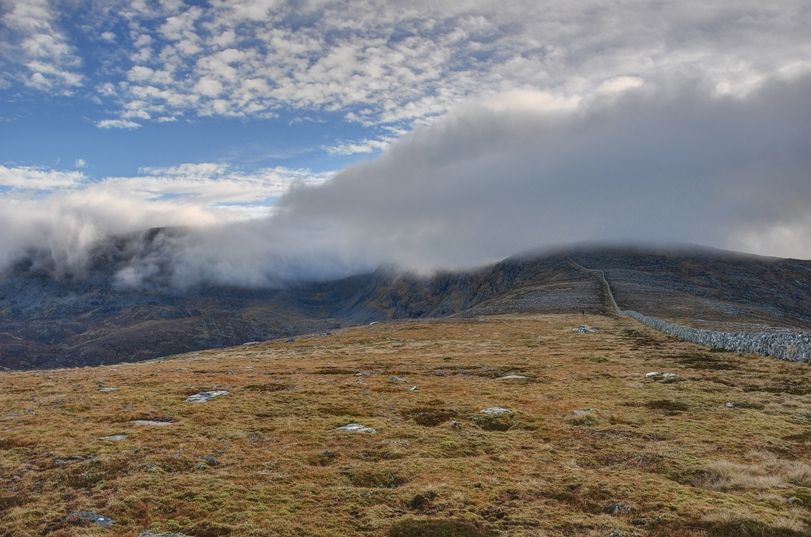 Another rather atmospheric view of Meall nan Ceapraichean: 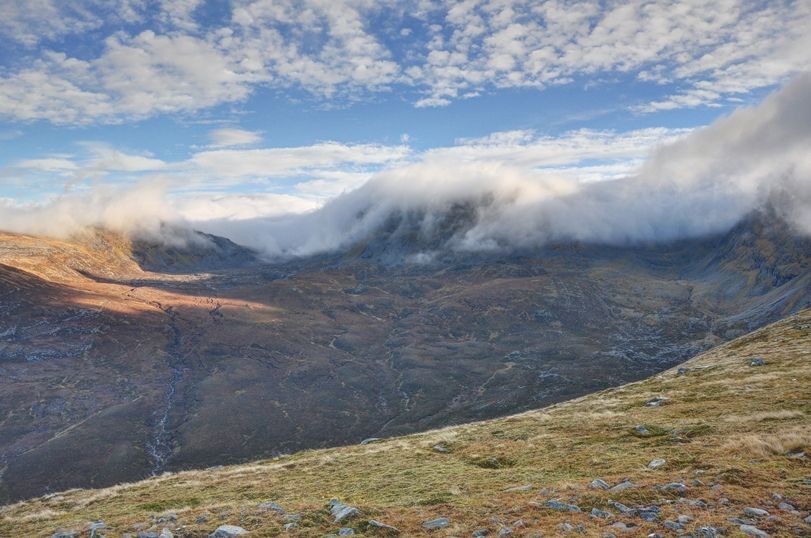 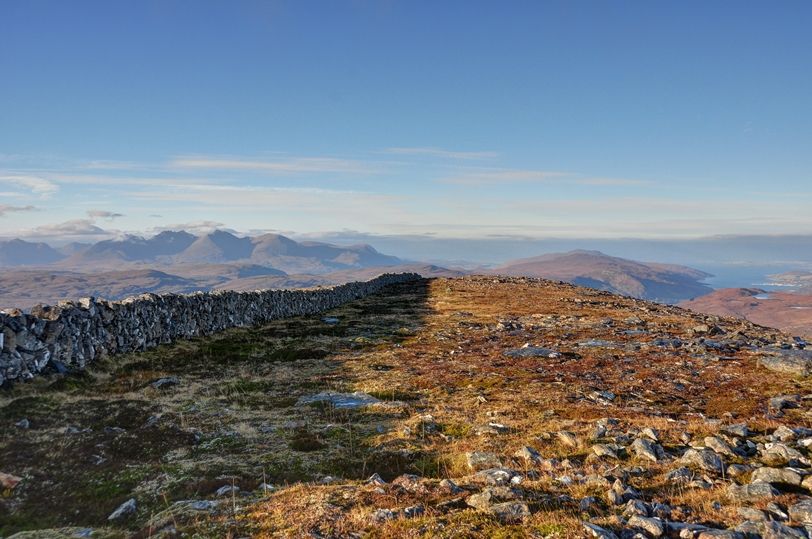 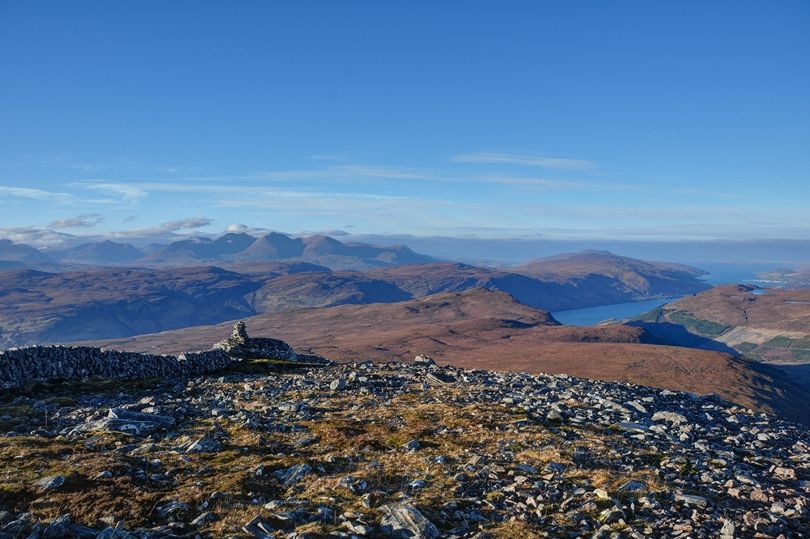 Sat for about an hour in the sun – the cloud began to disperse as the wind dropped out – freeing Eididh nan Clach Geala and then Ceapraichean of their coverings: 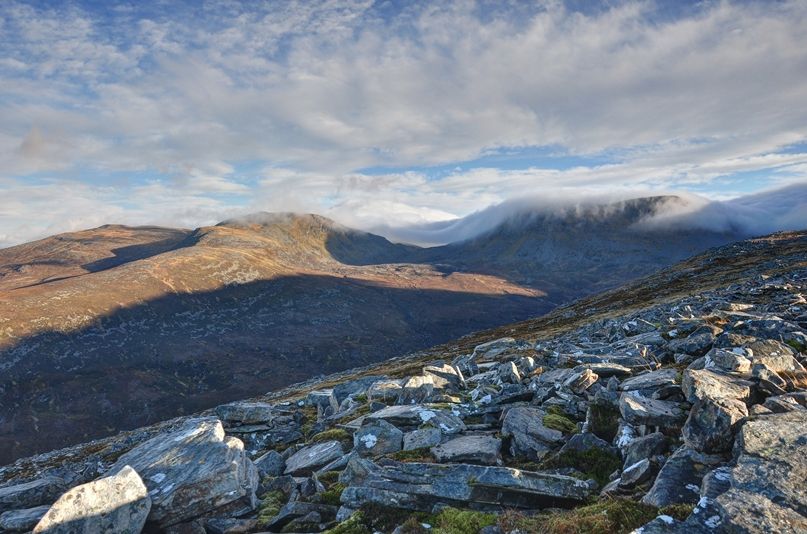 Meanwhile a front was approaching from the SW with high cloud darkening the hills that way: 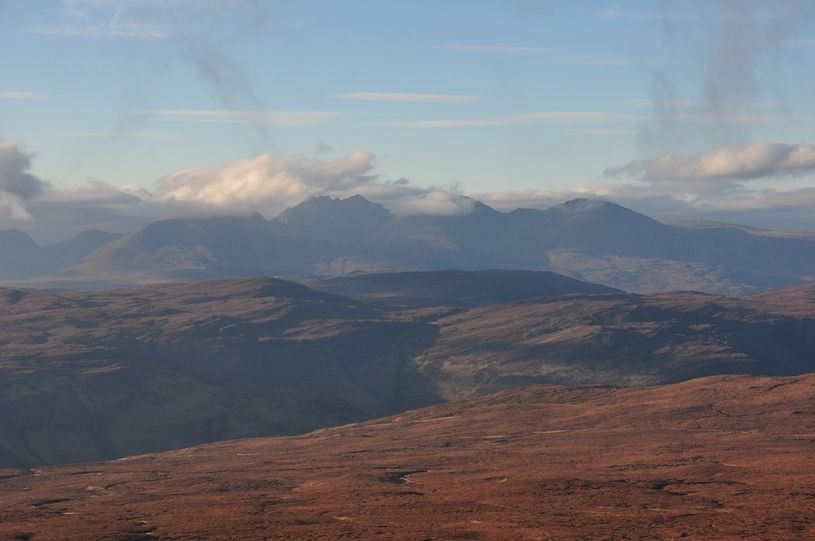 Assynt was still in the sun: 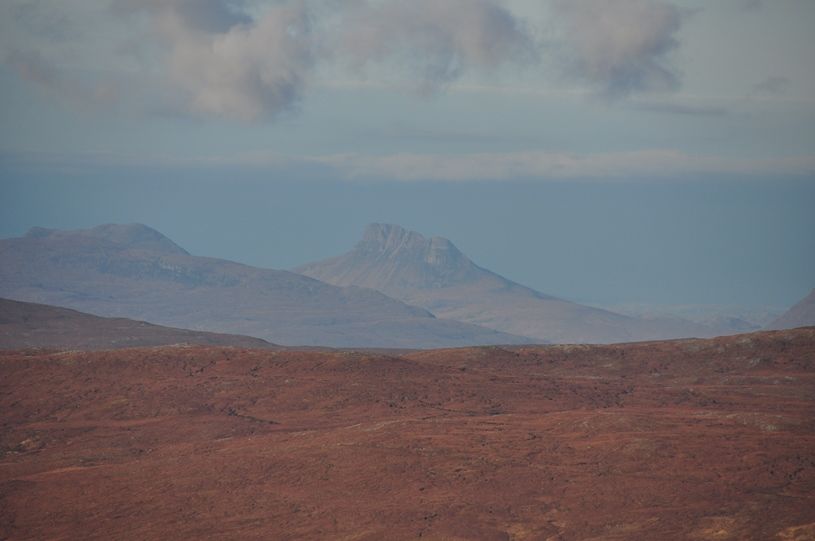 We dropped back down the ridge in rather nice light. Slow progress due to a lot of standing and looking rather than walking. Beinn Dearg’s summit cleared up finally: 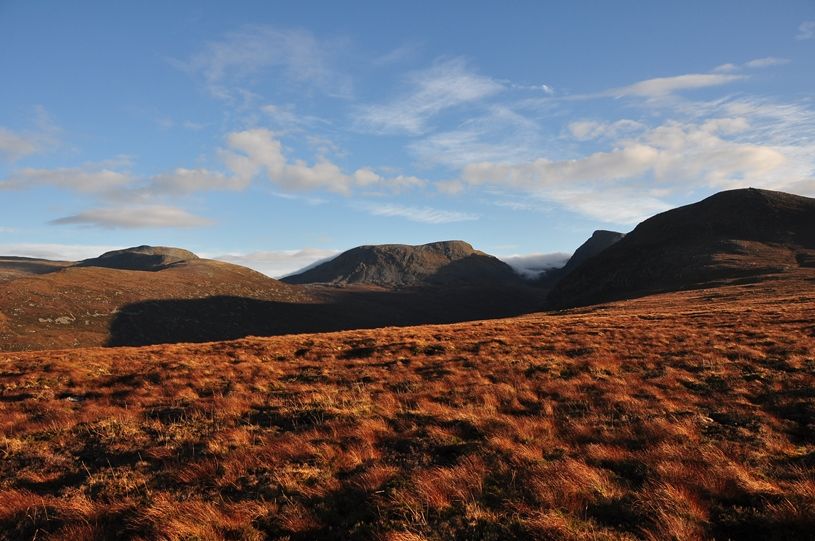 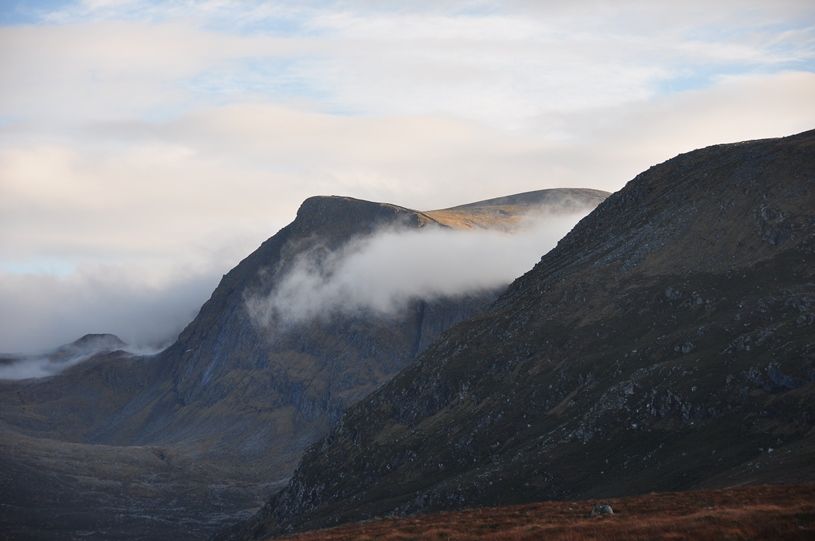 The clouds from the SW spread quite quickly to steal the views: 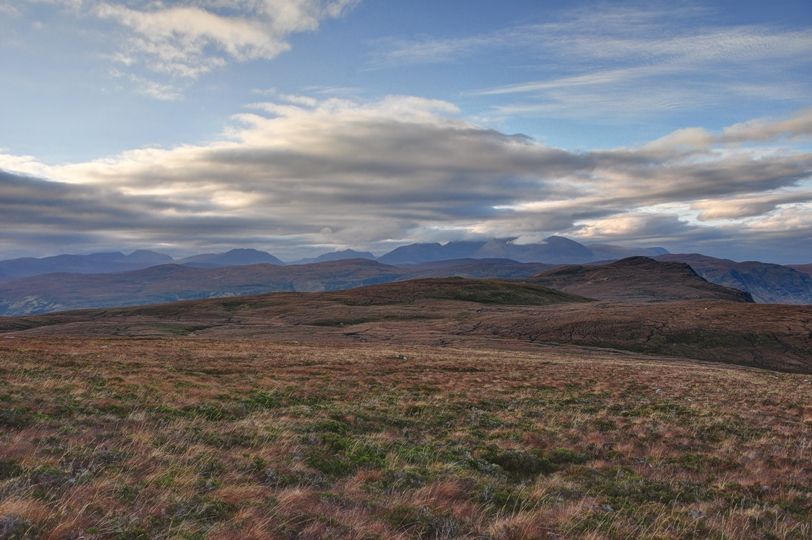 Beinn Dearg clagged over again by the time we got to the river crossing: 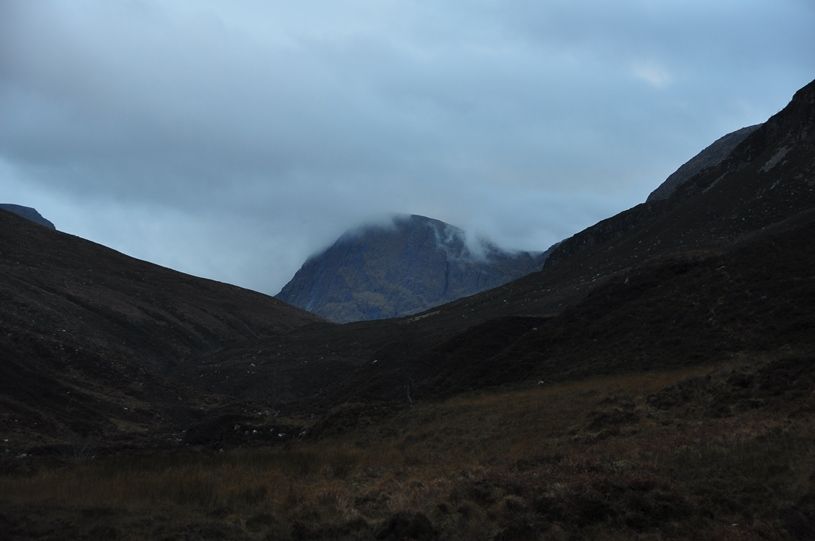 A really nice ridge – more of a reconnoitre for us – a high circumnavigation of Gleann na Sguaib looks a nice walk. A high wild camp in this group would be nice too.