After a night at the Drinishader hostel drying out after a rather wet Wednesday we had a forecast for sunshine and showers.

Last year, while Hazel was nursing a back injury, I went over the Postman’s track from Urgha to Reinigeadal as part of a loop of Todun and Sgaoith Aird.

We decided to head up the track from Urgha and then out the ridge to Leac Easgadail, a nice viewpoint for loch Tairbeart and Scalpay.

Another breezy day – about 25mph, with short, sharp showers and a biting windchill.

The track is excellent quality and makes for quick progress to the high point. 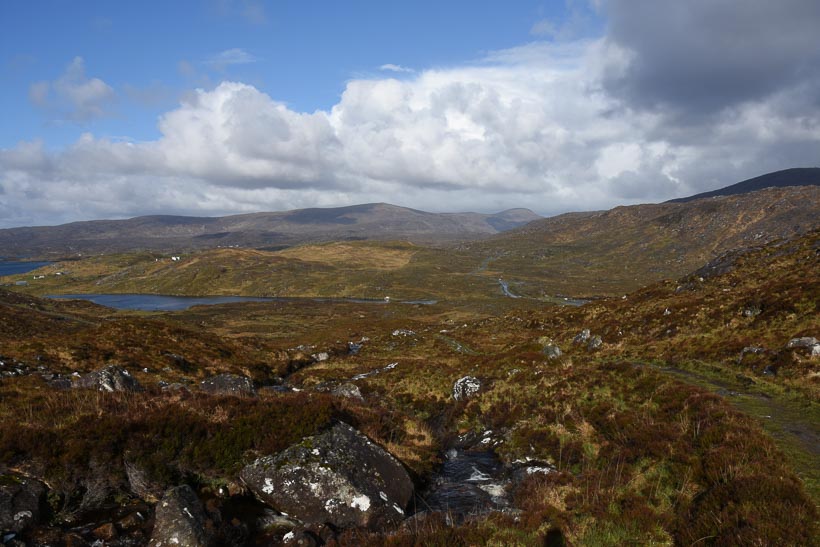 Trolamul, about 400m and 40m climb to the north of the track, is a HuMP. We simply headed in the opposite direction across Beinn Tarsuinn and Beinn a Chaolais to Leac Easgadail. A gently undulating ridge.

The Shiants were visible to the NE. 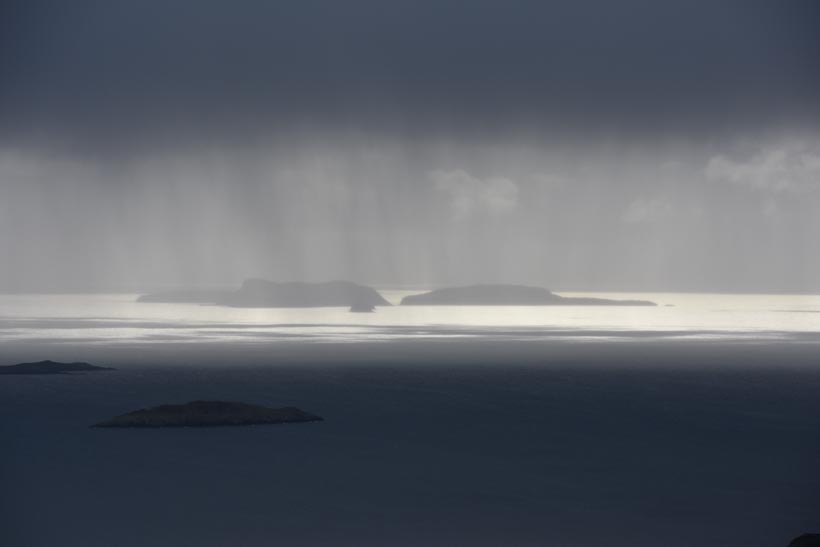 Rather brooding hills towards Clisham (which was clagged for most of the day). 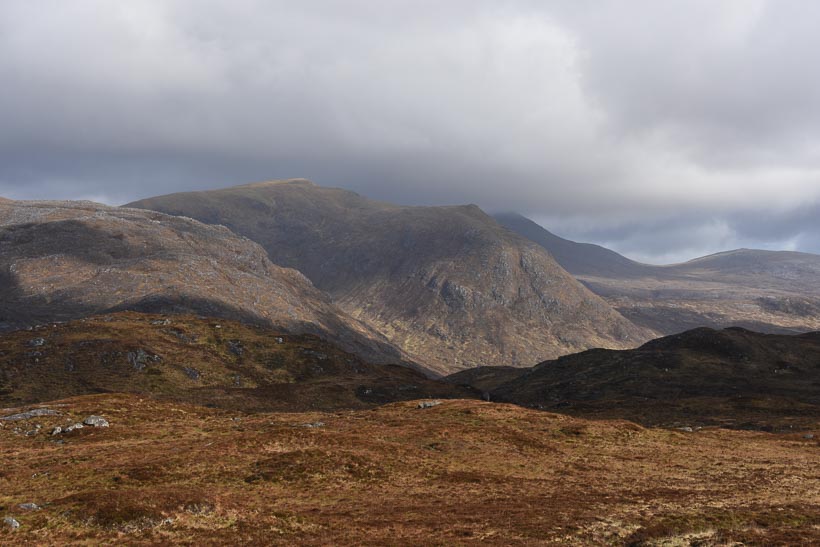 As progress is made eastward there’s a nice angle on Loch an Tairbeart. 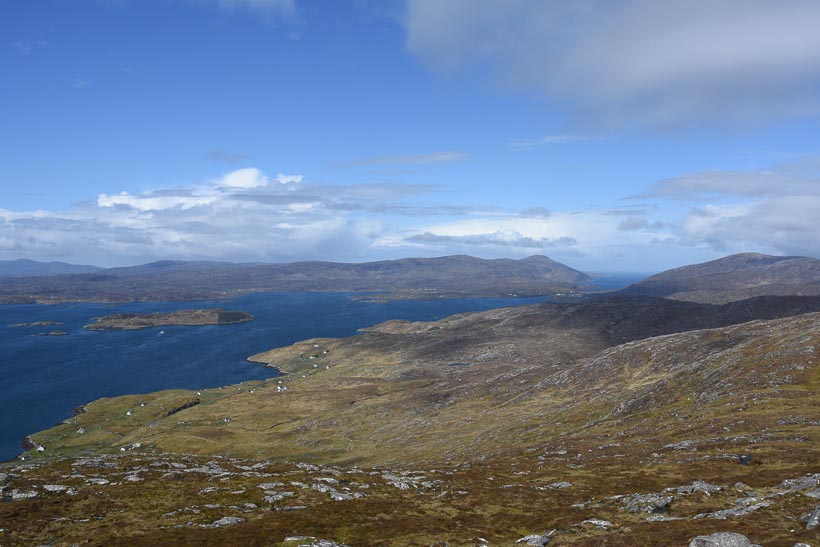 To the north there is Loch Trolamaraig and the Reinigeadal hostel. We were looking carefully at this area as it looked a good candidate for a pitch site given a forecast for around 30mph northwesterlies into the evening. 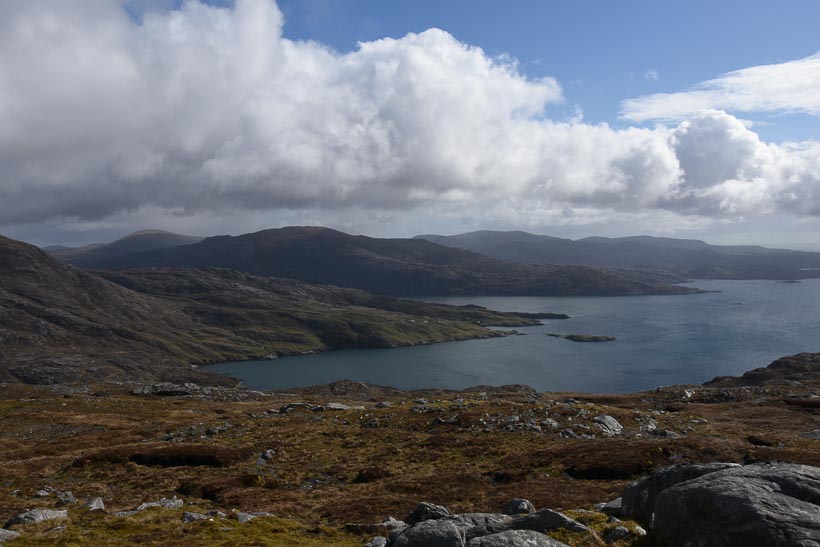 As Leac Easgadail is reached there is a cracking view down to Scalpay and its bridge. 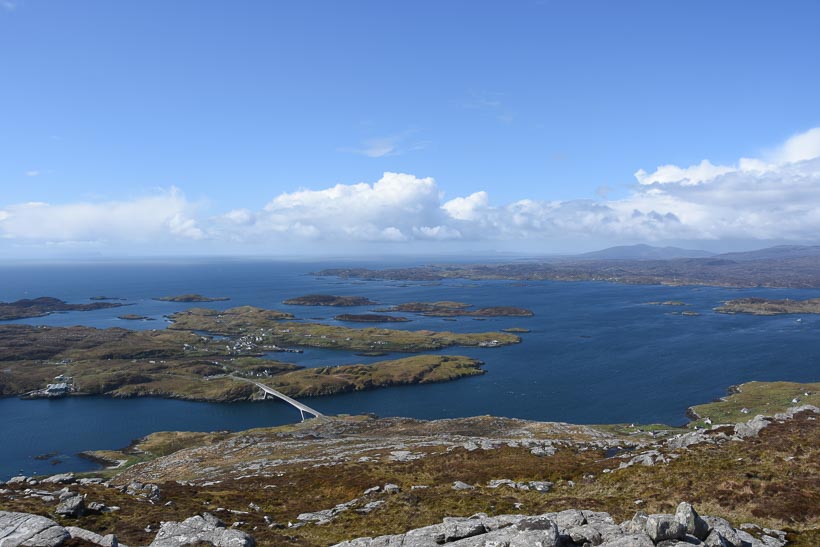 Ducked behind a rock to sit out a particularly perky shower. Made for brooding views on and off. 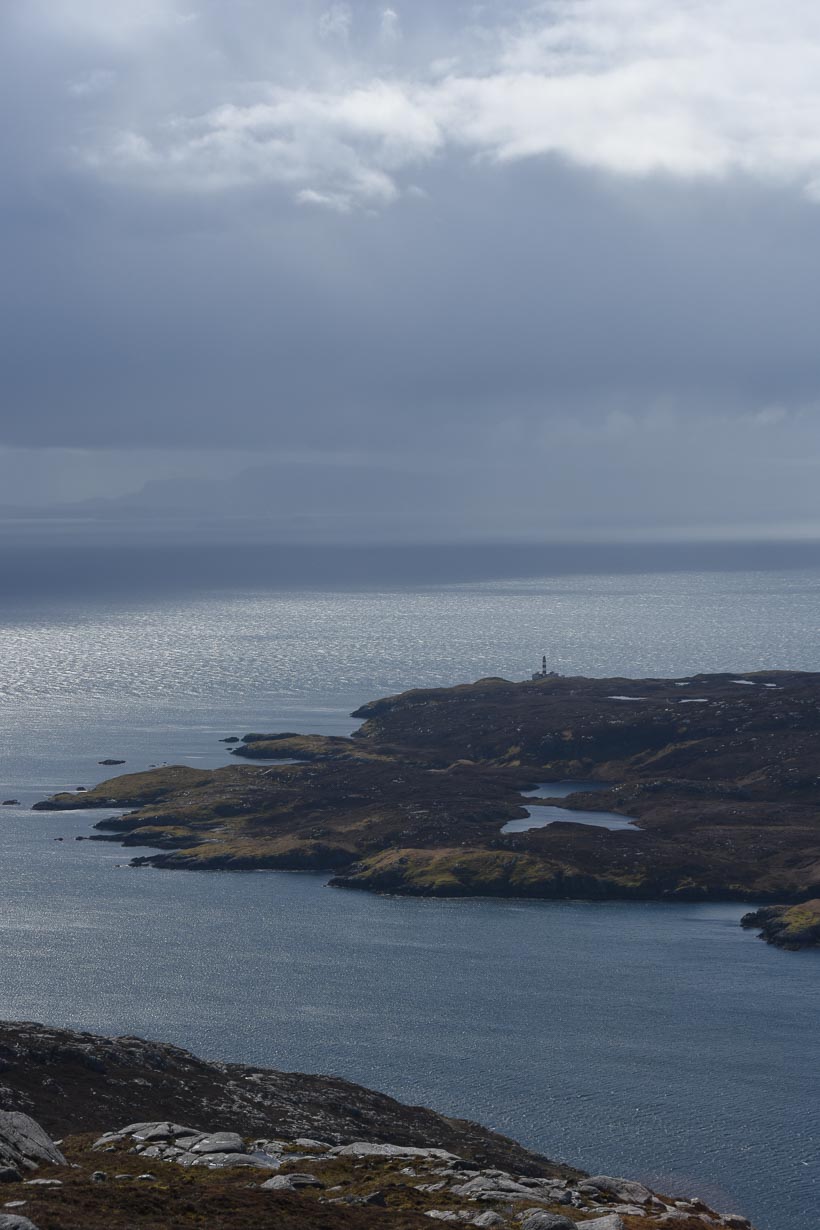 Most of the week was punctuated by the sound of disapproving Golden Plovers. 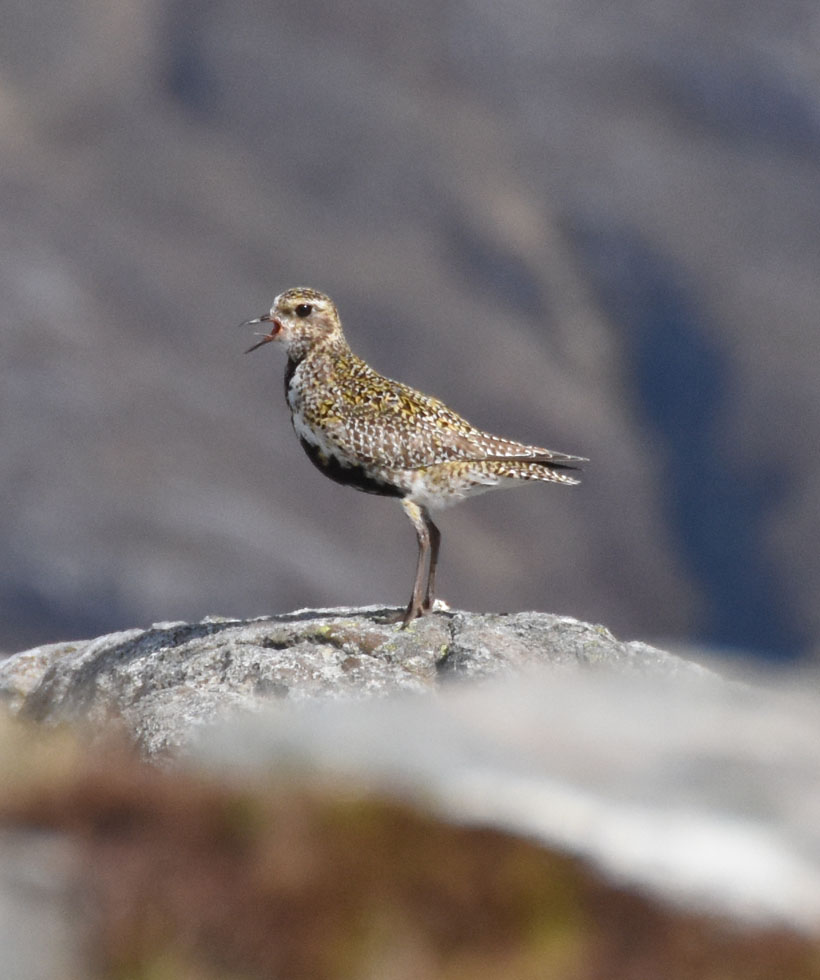 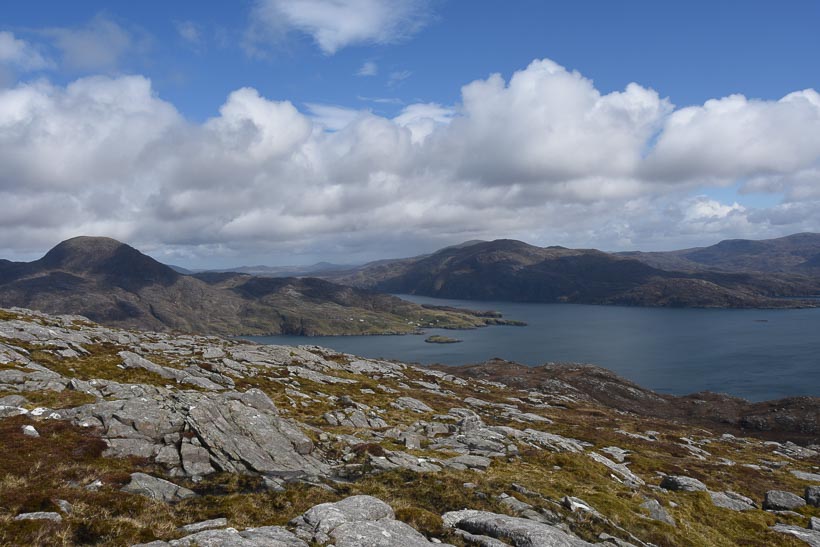 Within 10 minutes of rain it was sunny again (if rather cold). 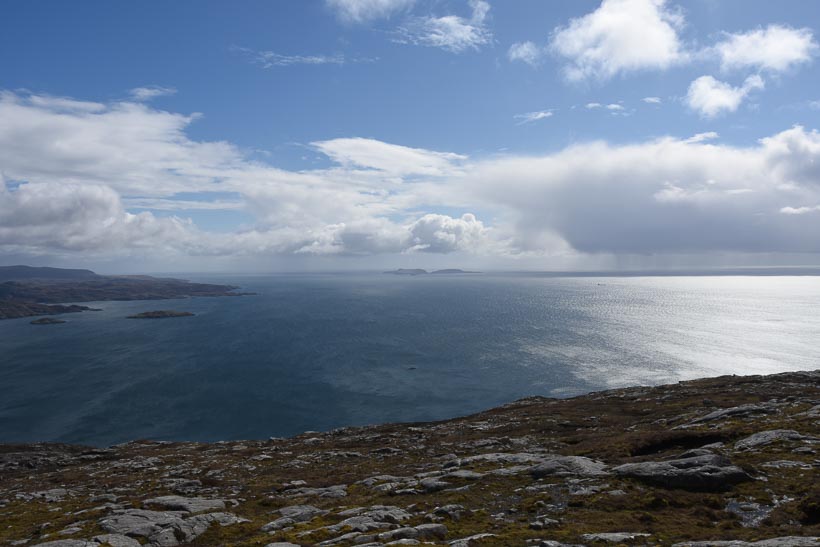 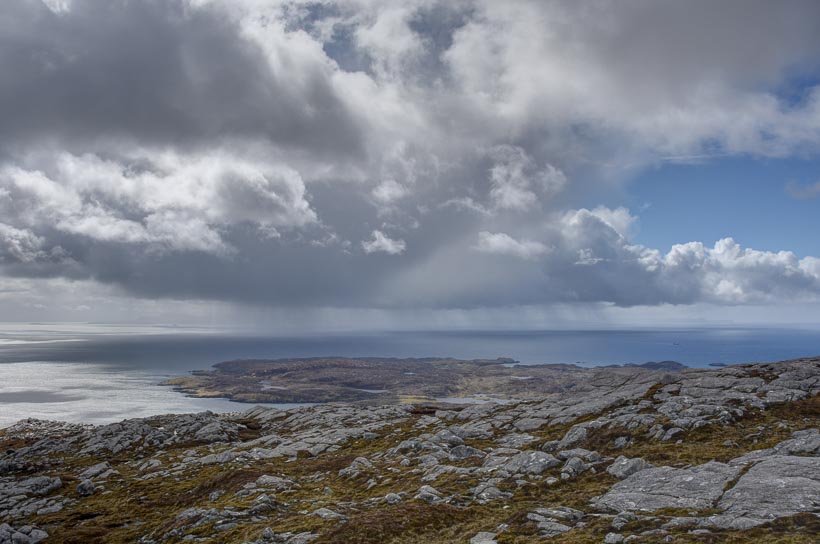 The Uig-Tarbert ferry was shuttling back and forth. 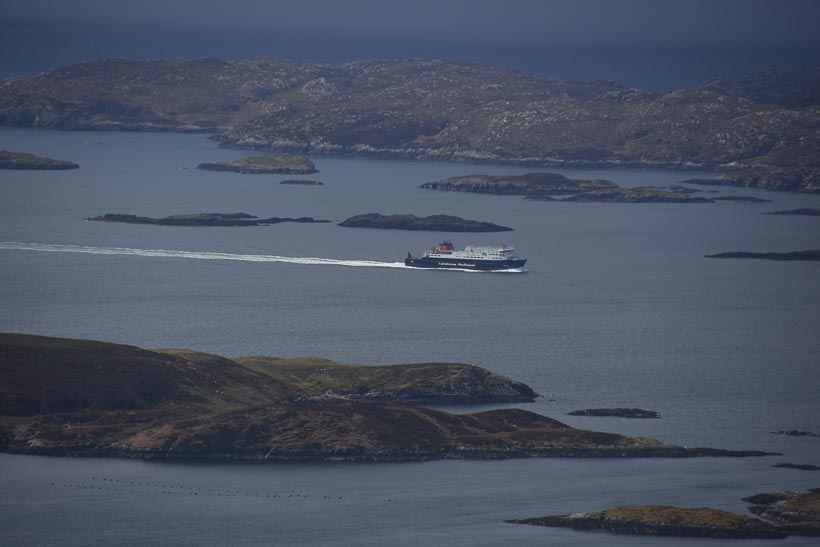 Headed back from Leac Easgadail to Beinn a Chaolais before dropping down to the Molingeanais track.

A snipe erupted from the vegetation under my feet at one point – I had to stand still for a few minutes before I could work out where the nest was to avoid dtanding on it. Amazingly well concealed. 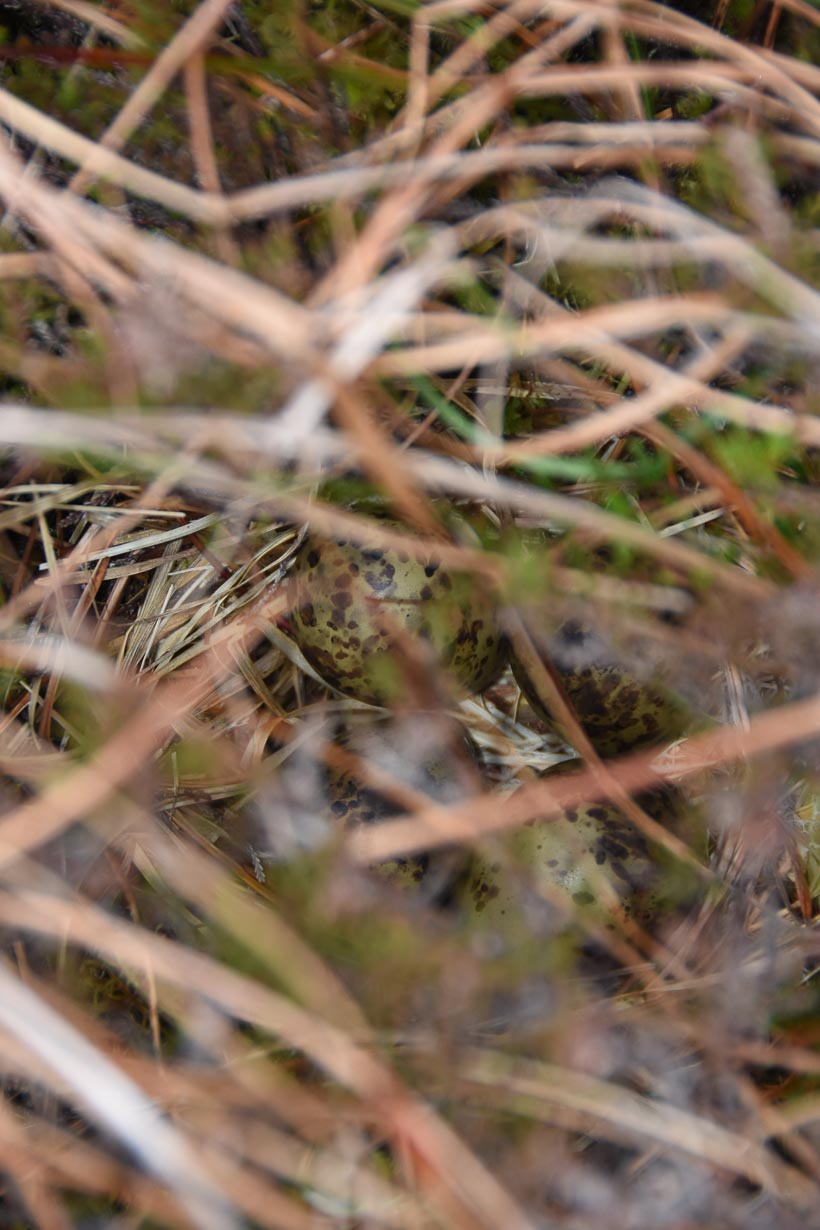 More perky weather pulsed on through. 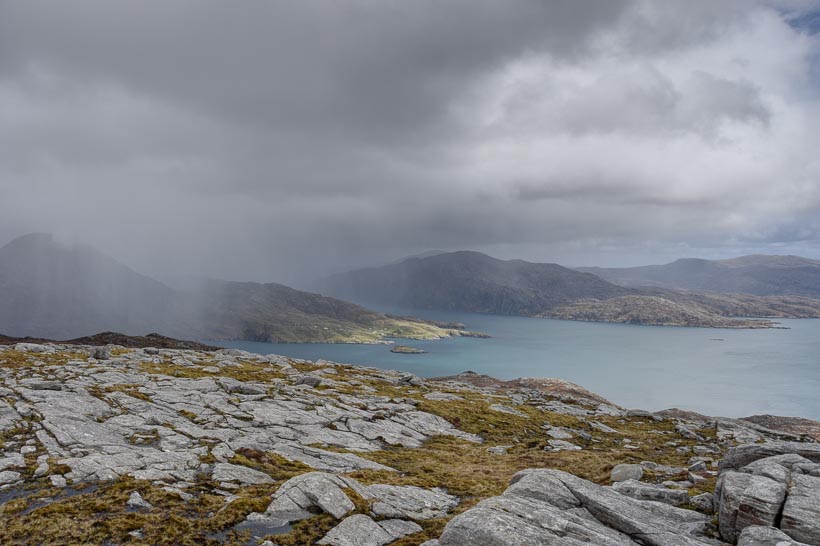 The cottages at Molingeanais are apparently available to rent. Rather secluded. 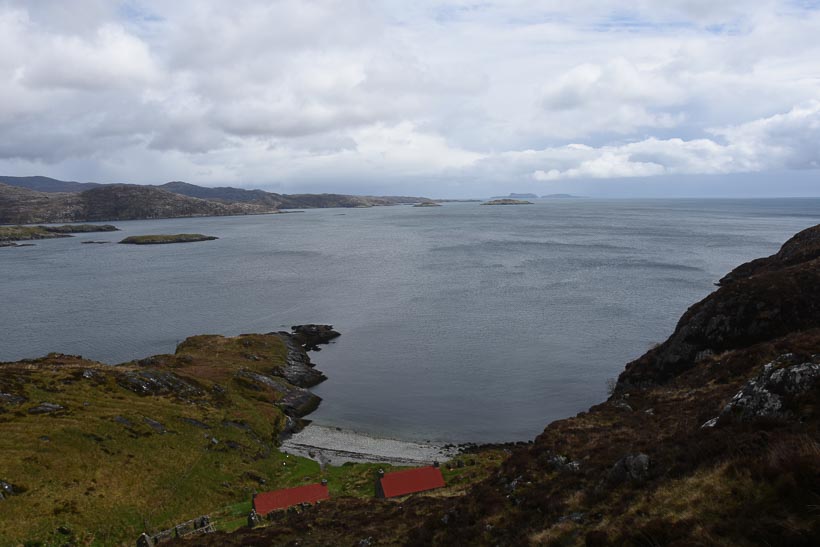 The path from Molingeanais back to the Postman’s track at the shore of Loch Trolamaraig was rather rough and crossed at least one stream which would be difficult in spate (Gill Gharbh).

Had lunch at the loch shore before heading back over the Postman’s track to Urgha. A cracking zigzag with fine views of the loch. The loch was hoaching with porpoises last august – may return again later this year. 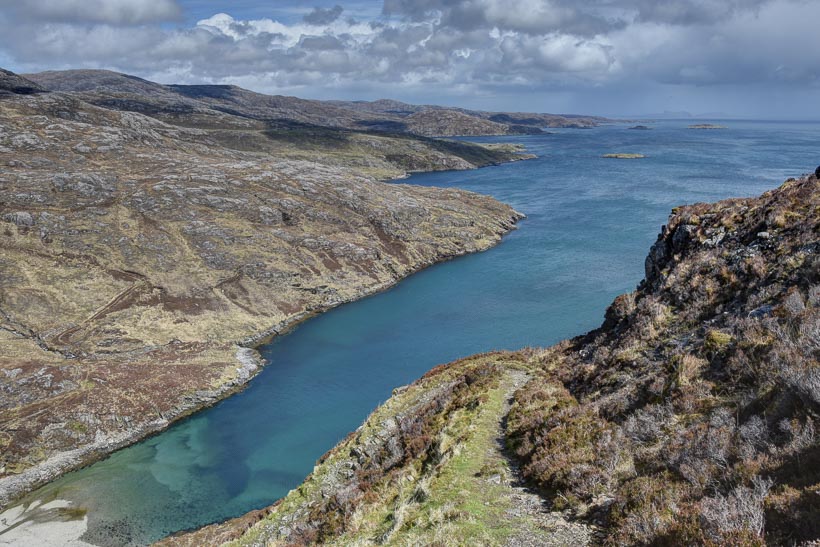 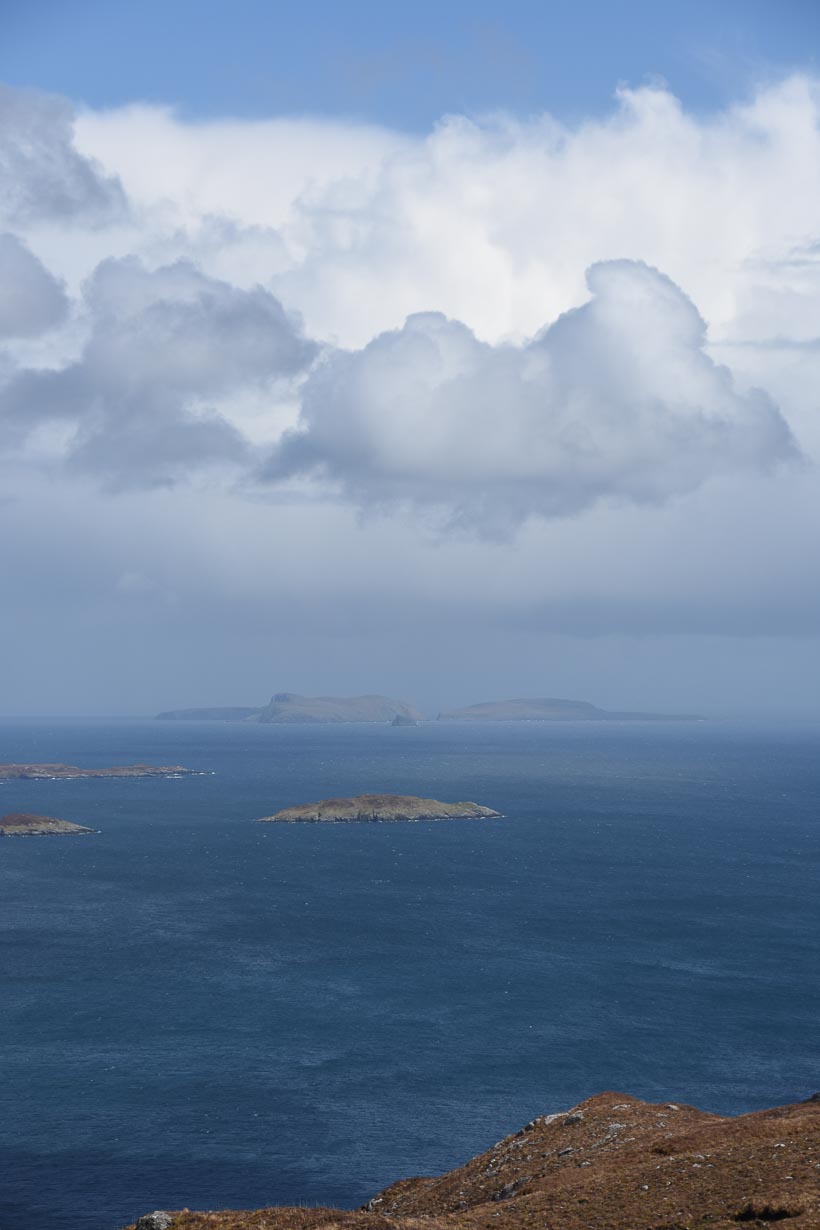 Picked up a few supplies at tarbert and then drove round to Reinigeadal. Parked at NB 221 020 and camped at a flat area on the shore at NB 220 017. Initially high gusty winds dropped out into the evening and it proved an excellent pitch site with the added bonus of an otter swimming by in the morning. 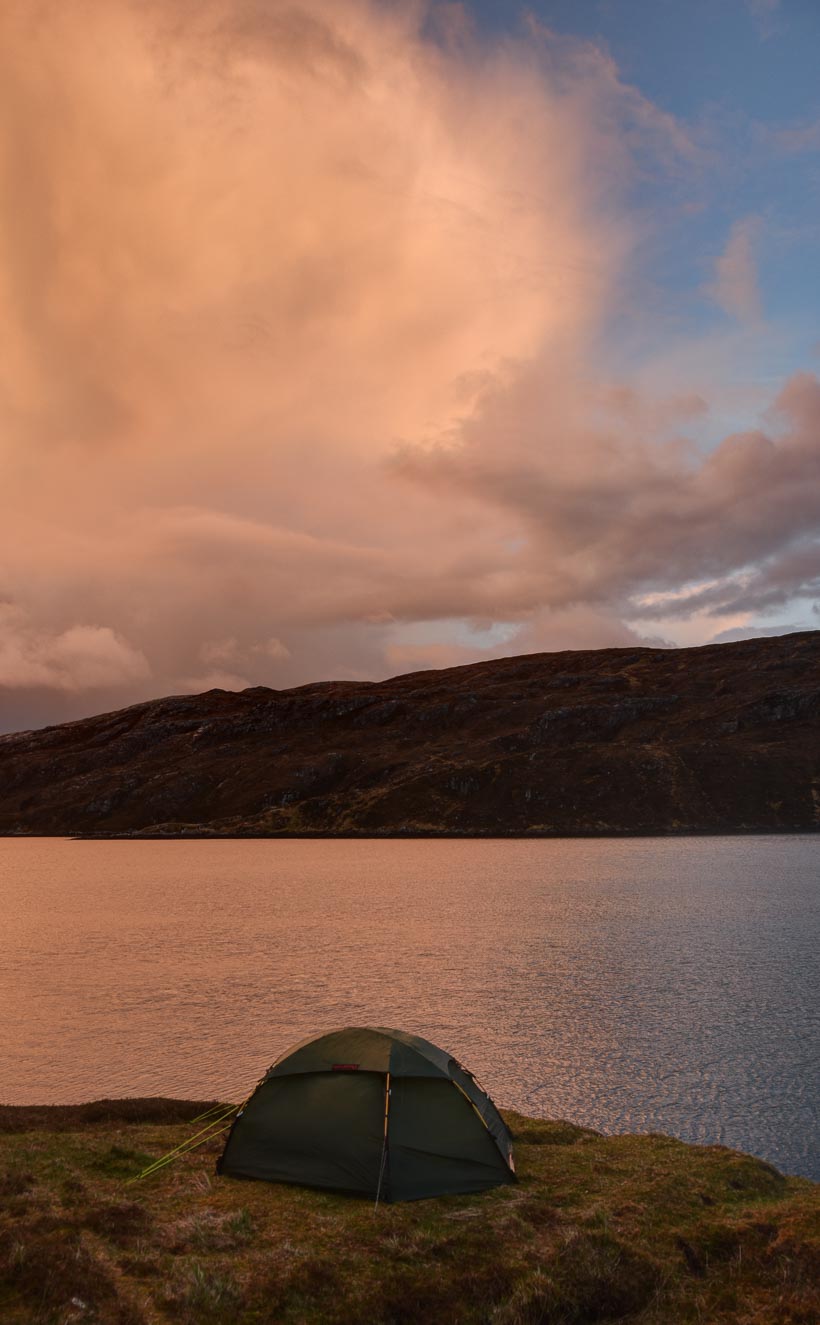 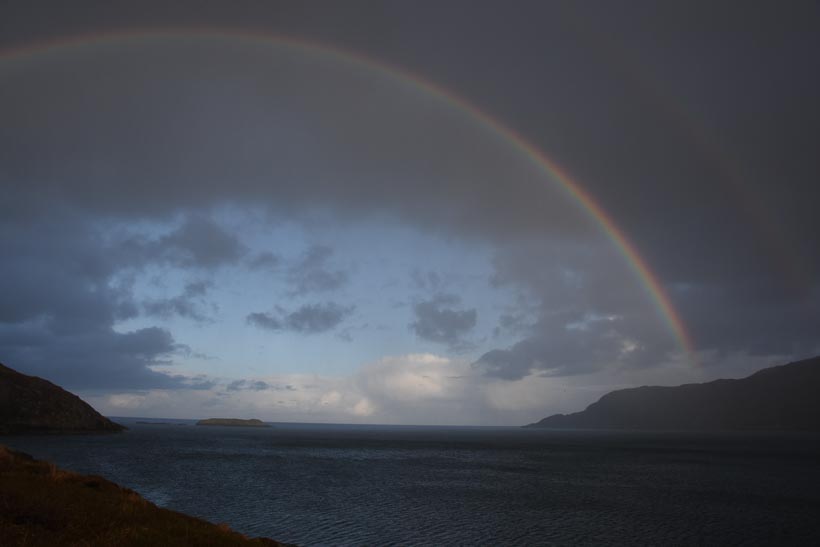 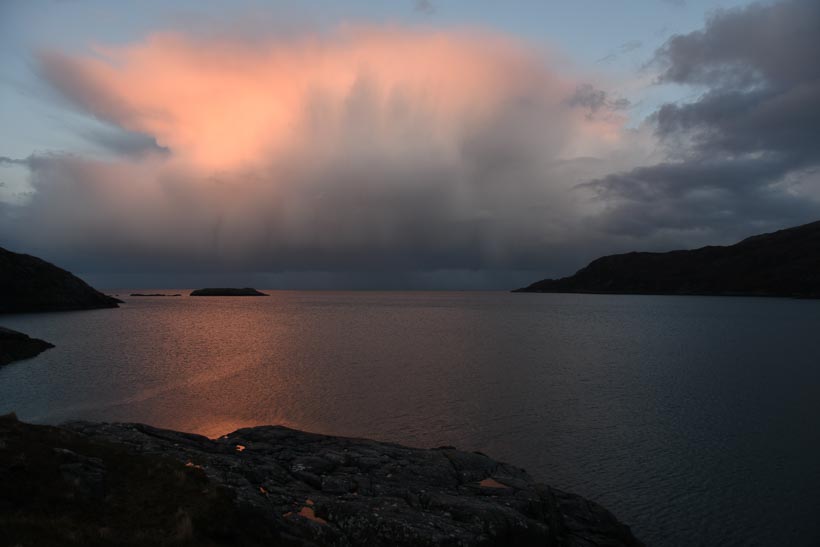 A cracking day – the Leac Easgadail ridge may not be on a list but it is well worth the effort.