A rather welcome Shills Meet saw us up north for the first time in a month, even better the accommodation and company were splendid, and the weather was looking reasonable.

Glen Affric was a regular haunt for us a while back, but has been only infrequently visited for a few years now.

With a decent Saturday on the cards we decided to revisit the big hills by our favourite approach – Sgurr na Lapaich.

Out early we were walking not long after 0700 – a fine morning. A quick 2km to Affric Lodge and onto the stalkers path which runs up past Am Meallan to Gleann nam Fiadh. 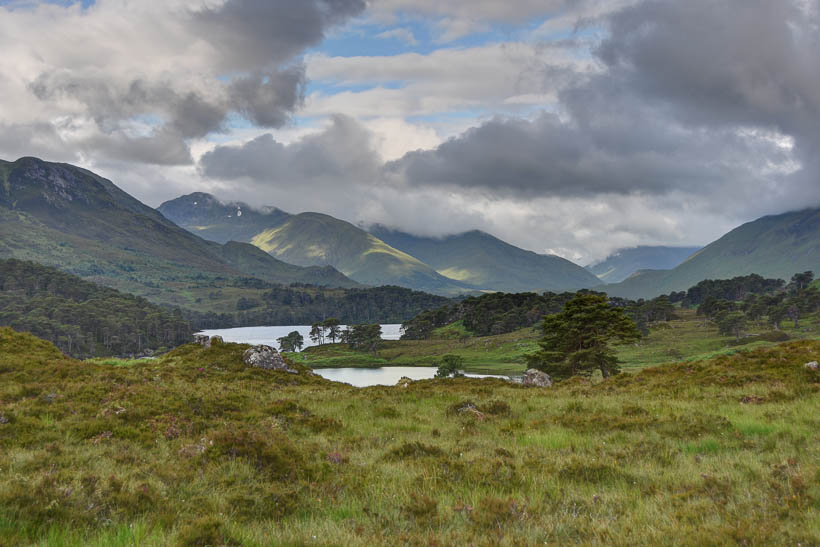 Quick progress on the good path to the corner at NH 176 239. From here direct across the bog to Sgurr na Lapaich. 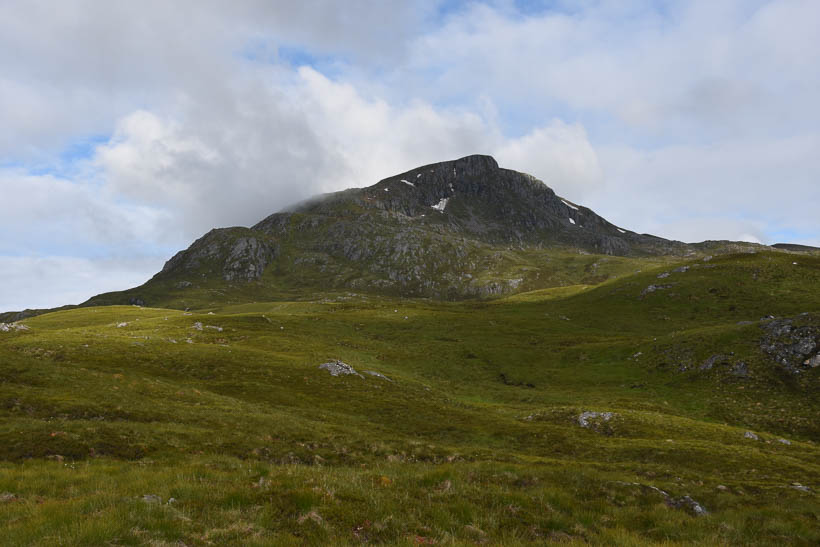 The ridge up Sgurr na Lapaich is at a good angle – quick progress to height. A winter start a couple of hours before dawn could see you high with great dawn views from here. 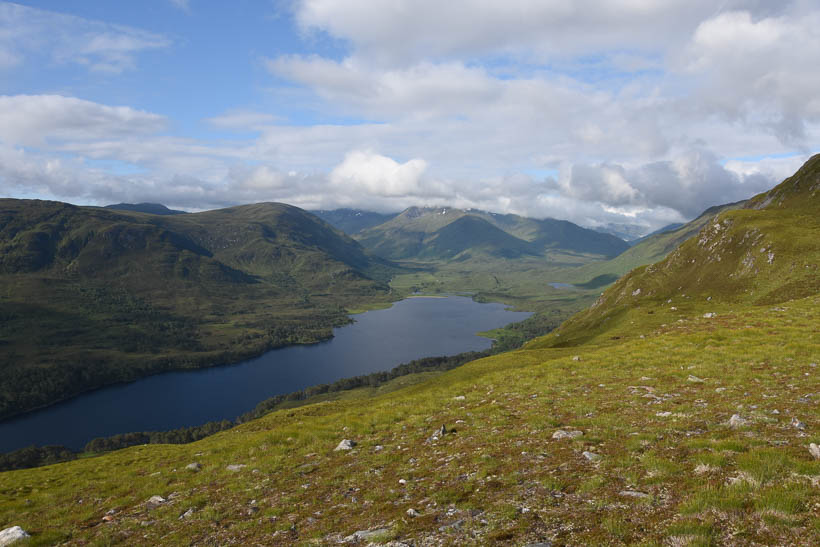 A plod uphill and we arrived at the summit of Sgurr na Lapaich – often the subject of Munro Tops for full munro status discussions. Personally I can’t see any positives that would arise from such a change.

A view across Gleann nam Fiadh to the Toll/Tom/Carn Eighe ridge. 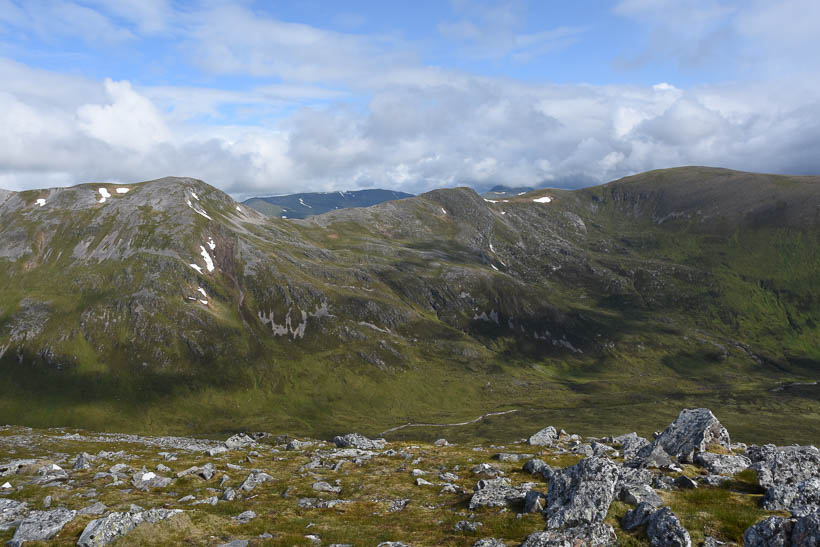 Didn’t hang around too long, turned towards the 2 big hills to the west. 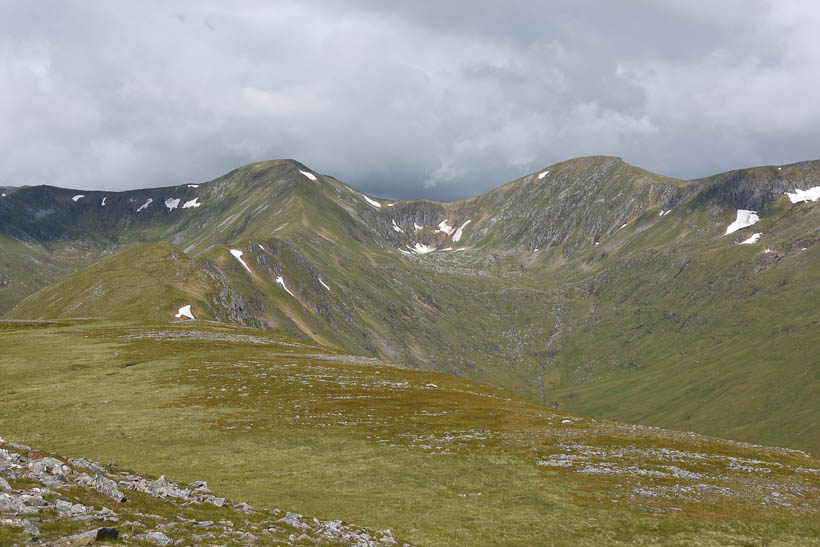 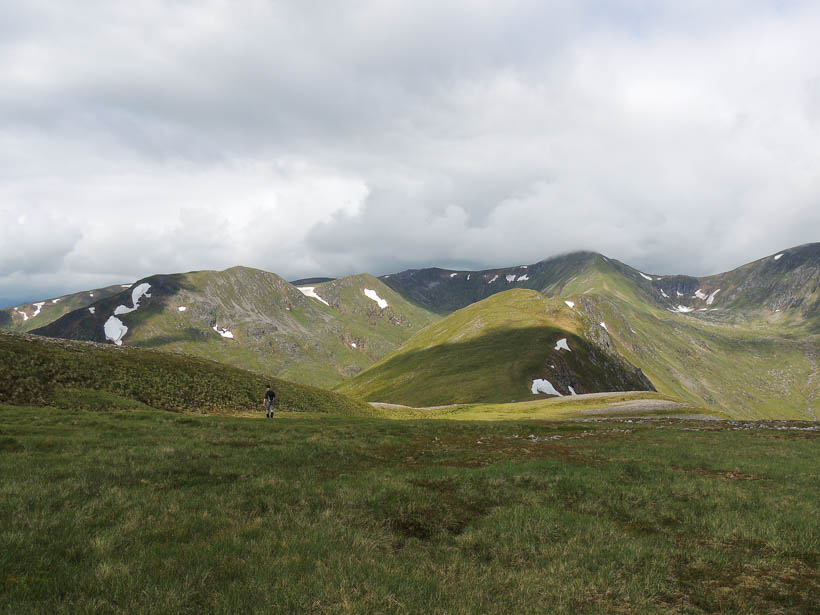 Irritatingly cloud started pouring over the 2 munros and heading towards us. 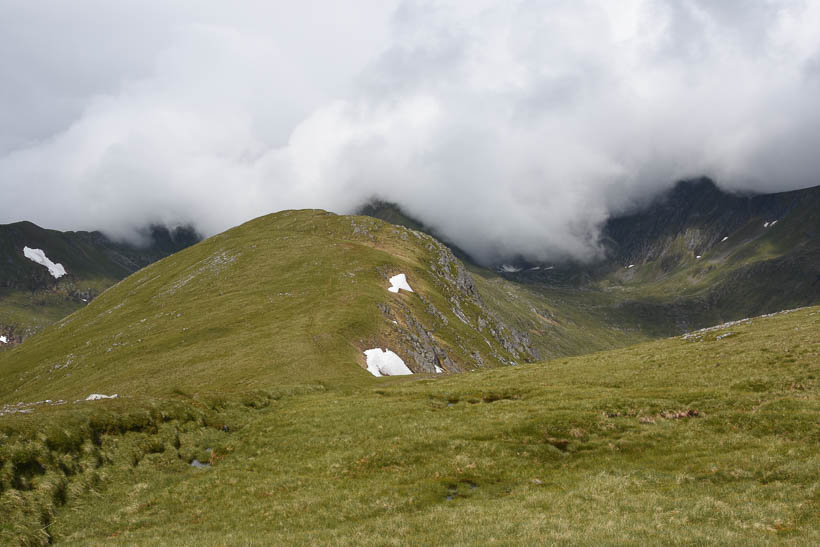 Across the glen the Affric Corbetts and N Shiel hills kept their sunshine.

Across to Mullach Fraoch Coire: 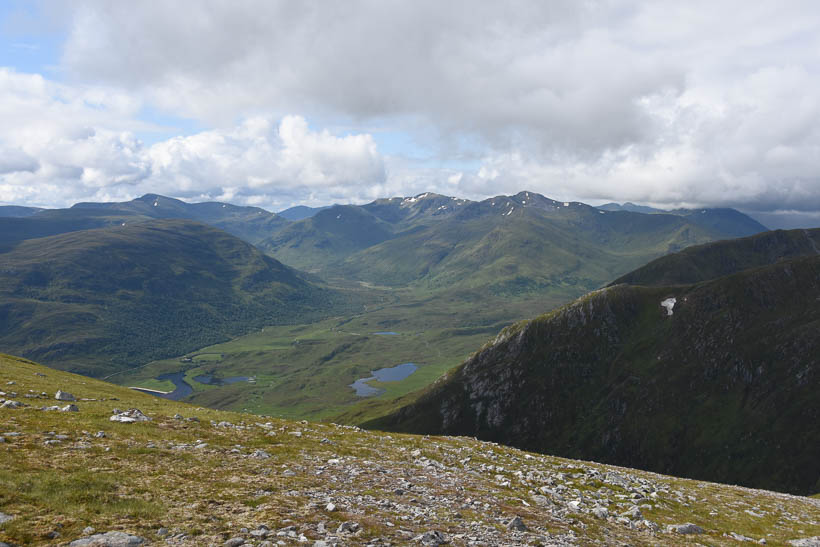 A rainbow is nice to look at….but less enthralling when it is upwind. 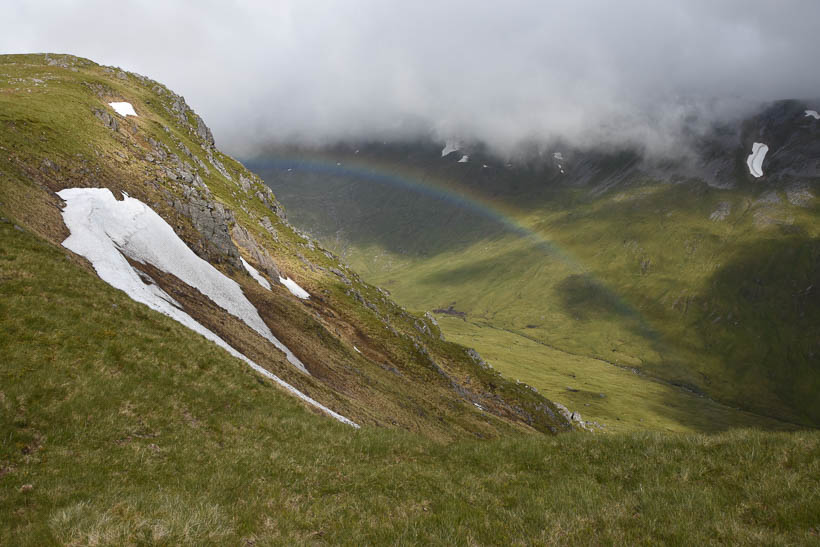 Clagged in, it then started to rain. We were approaching the 996m point by now so we sat and had some food and waited. Had no intention of summiting Mam Sodhail in clag if it would clear.

After around 40 minutes sitting watching the world we carried on, the rain having stopped but the clouds not quite lifted.

Across on An Tudair a group of stags were milling around on a snow patch. 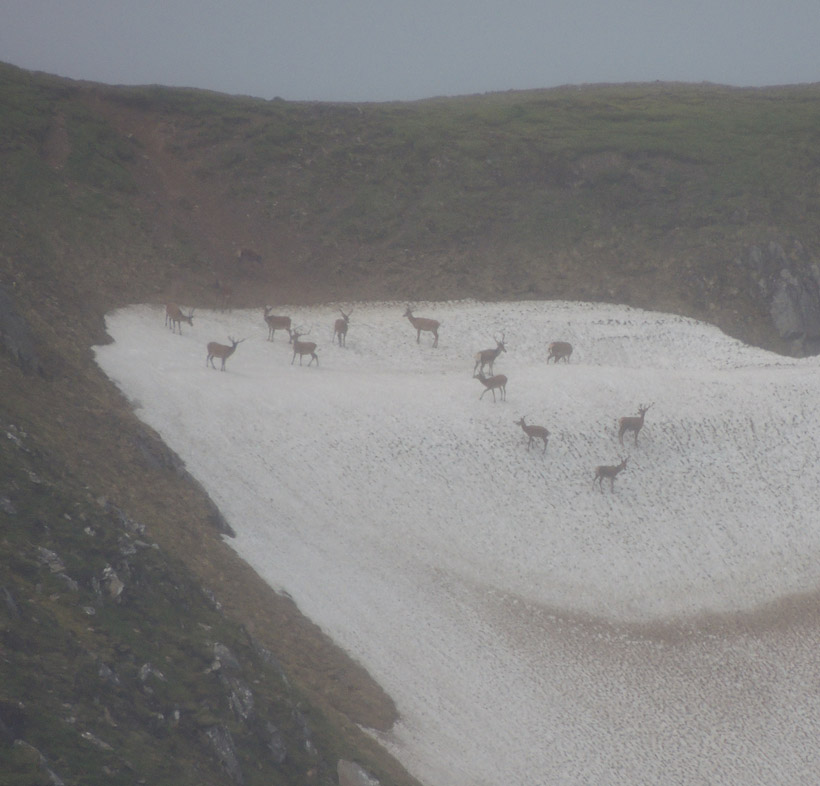 Across the glen the atmosphere had increased too. 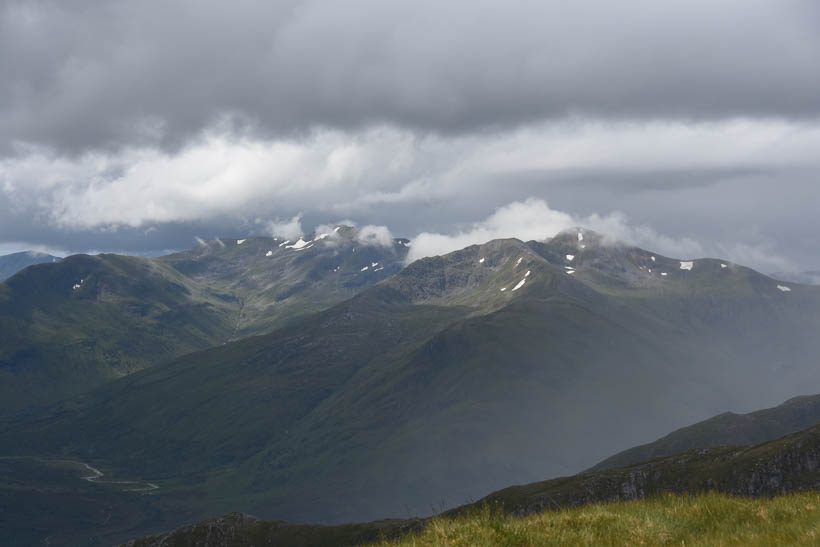 Steady progress had us on the last pull up Mam Sodhail, our 4th visit, and still not the great visibility we were hoping for. 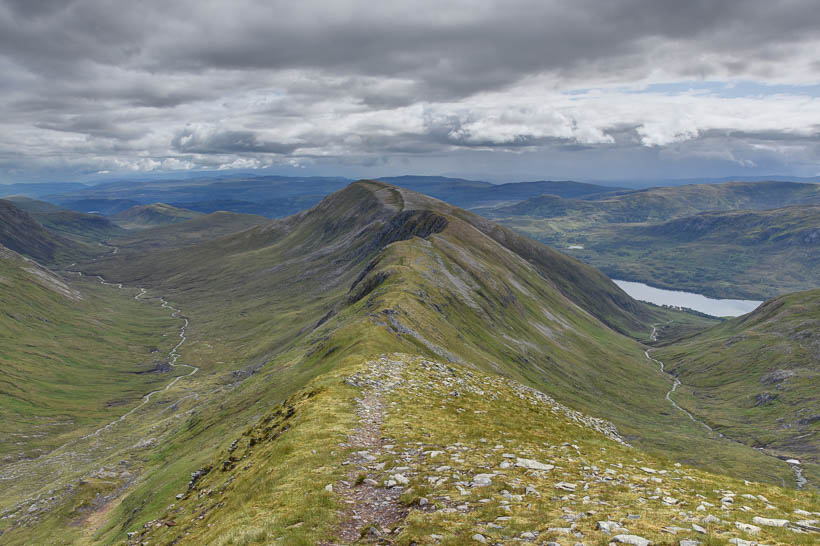 Still some decent views though. 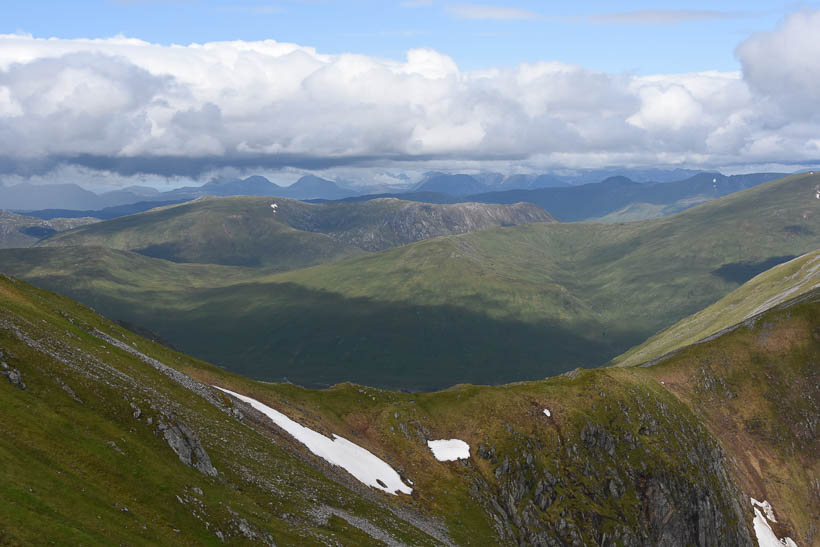 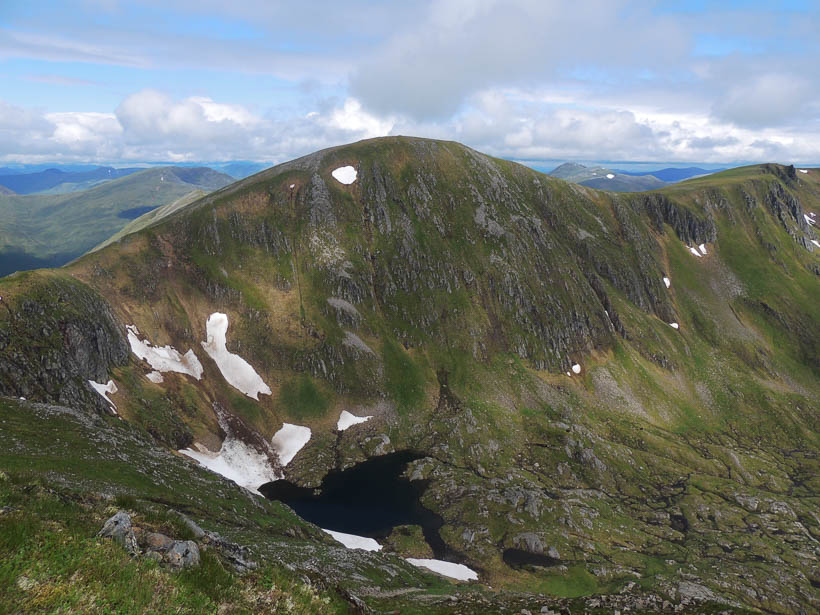 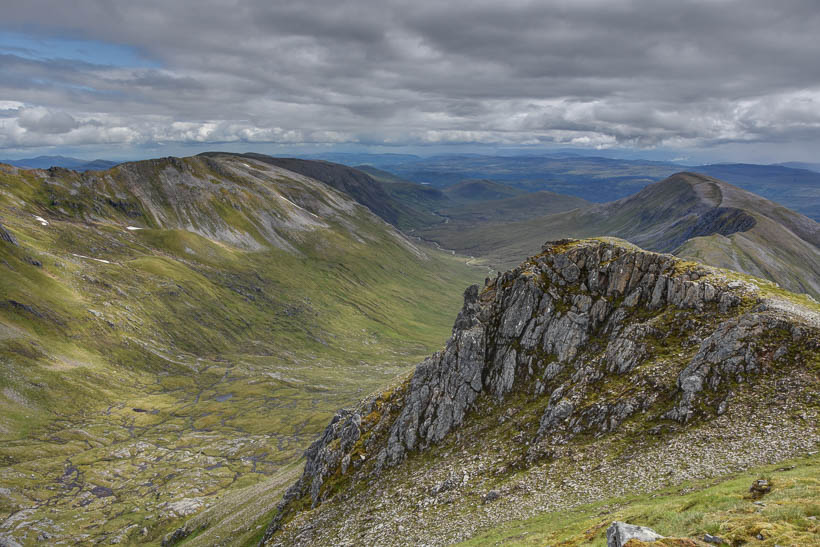 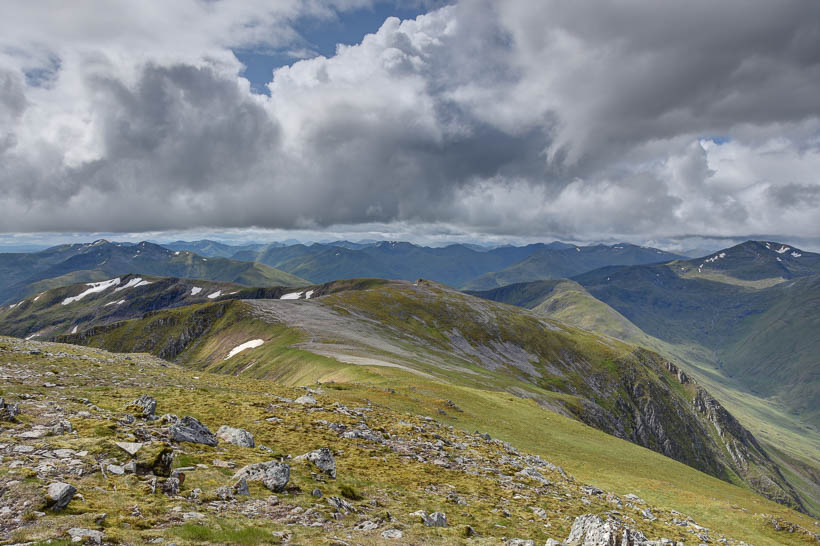 More cloud was heading our way so after about 10 minutes we headed towards Carn Eighe. Views towards Jerrycan were getting atmospheric. 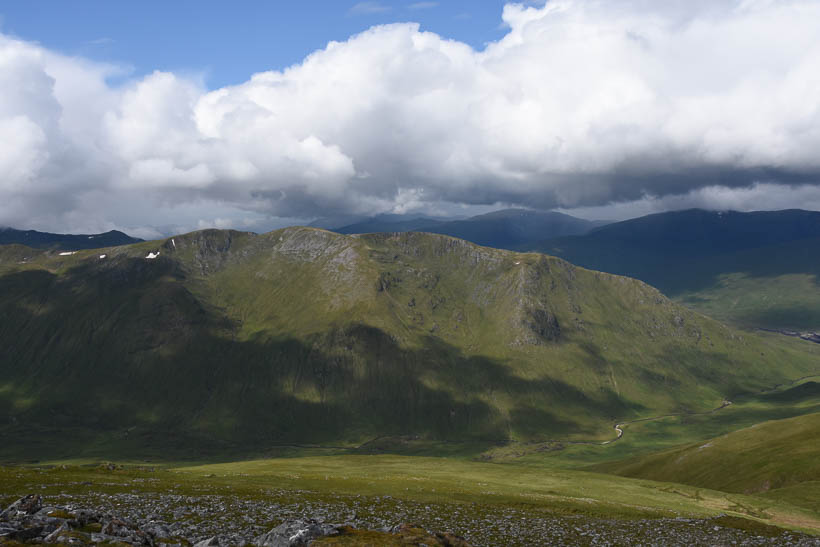 It’s only a 100m drop between the 2 hills so not too much of an effort – nice hanging coire between them. 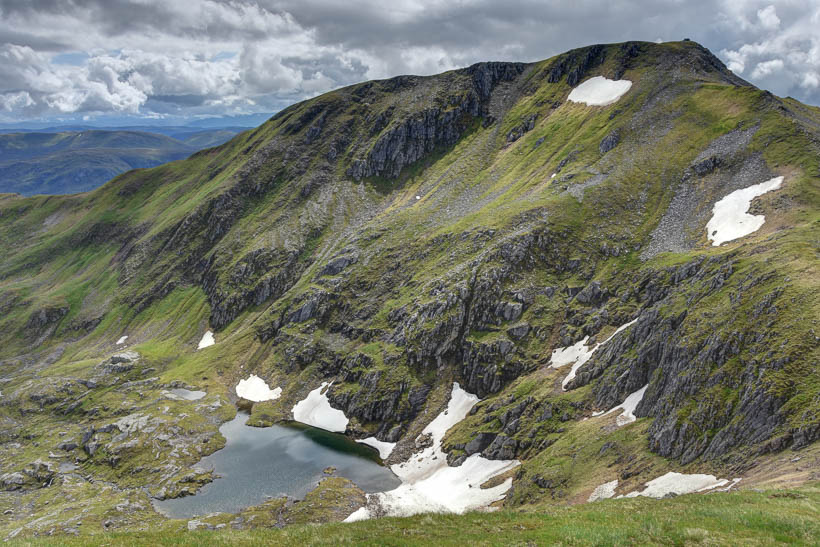 The cloud then rolled in again, so we decided to sit it out again. Tucked in behind an outcrop not far from the Carn Eighe summit, had some more nibbles, and waited. A fairly substantial rain shower this one, lasting another 40 mins or so.

Eventually it began to pass and we wandered around the summit area. 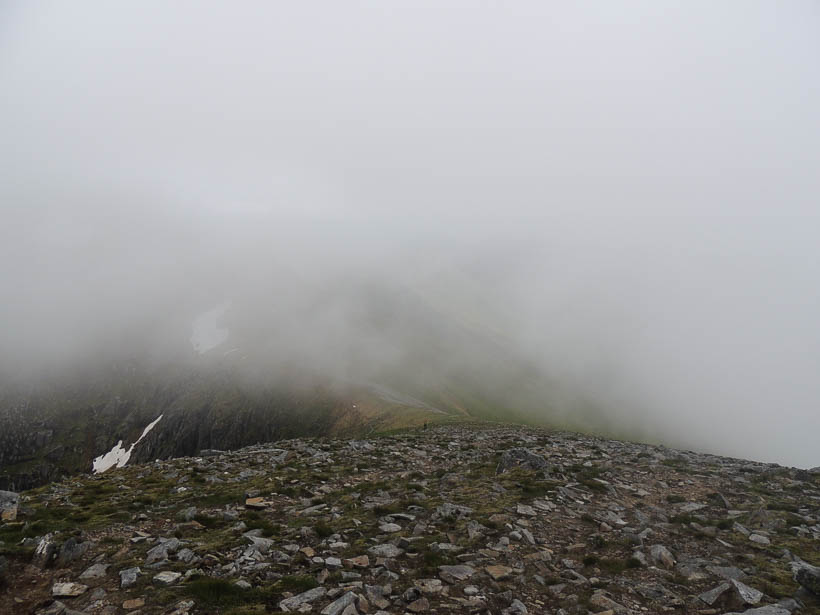 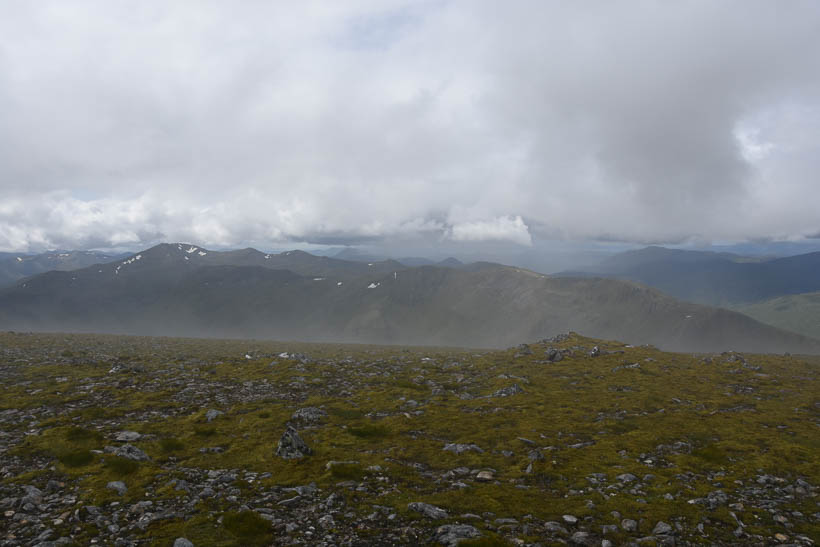 Could just see Fionchra and Bloodstone on Rum plus Canna at points. 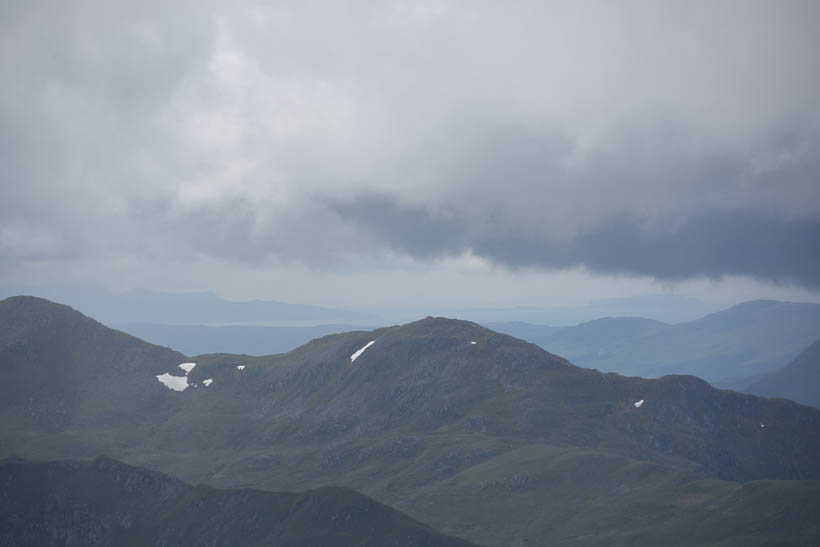 2 older gents caught up with us on the summit and had a chat. One seemed quite thrilled to touch the summit of his 250th munro (went a bit misty-eyed it seemed). They then ambled off towards Beinn Fionnlaidh.

We headed east towards Tom a Choinnich. Another burst of sunshine arrived as we descended. 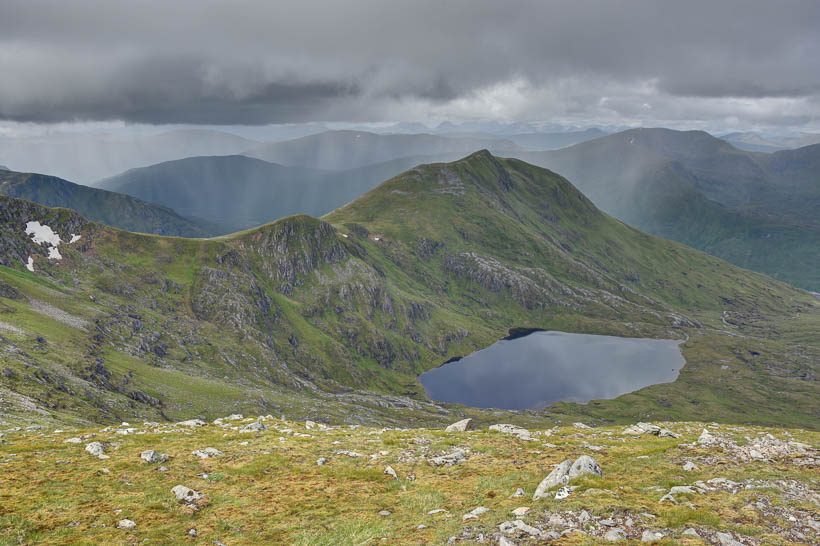 One of the new SAR helicopters was out on practice, zipping around the coire and at one point landing on the N ridge of Tom a Choinnich. 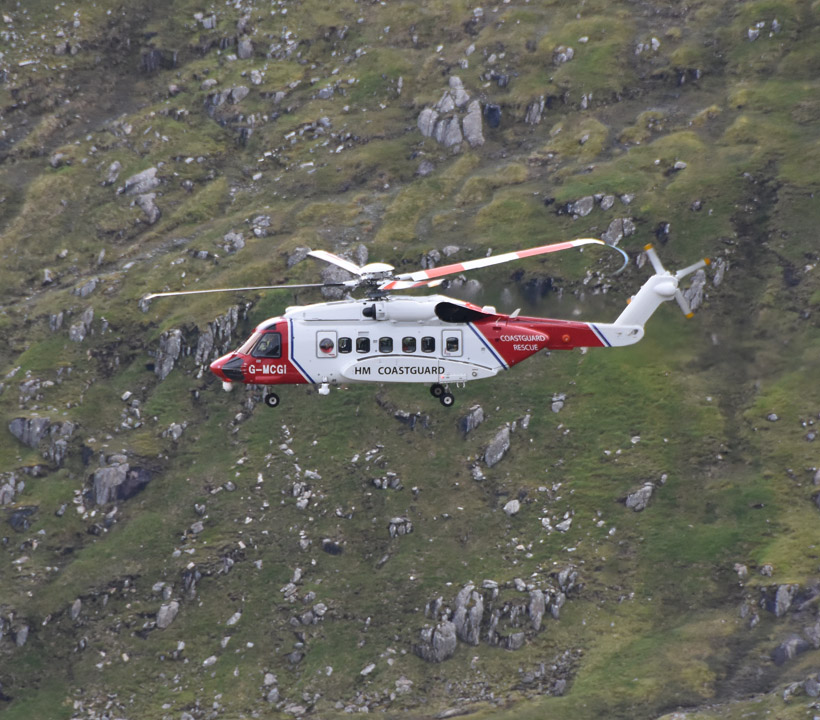 We carried on at an easy amble – not in any rush after all.

Back along the ridge: 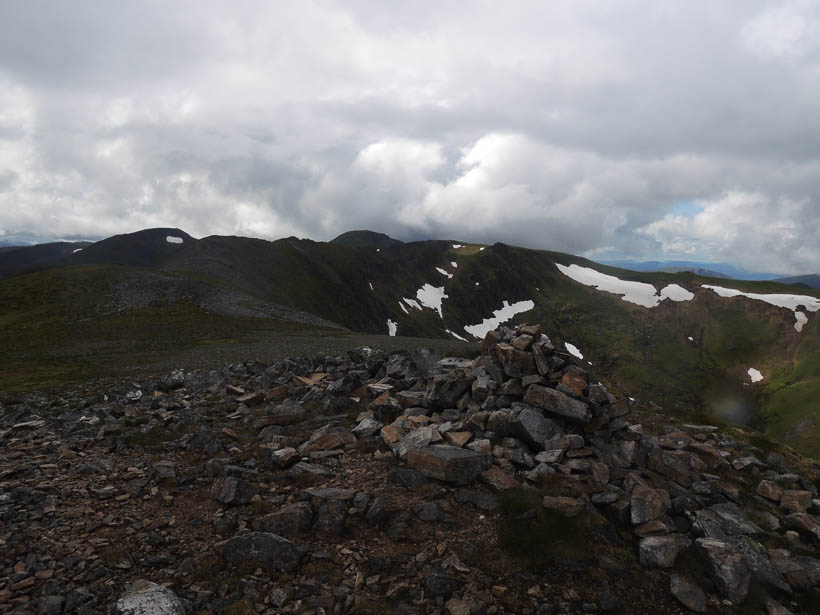 Dropped from the 1131m top down towards Garbh Bealach – this descent had a nicely built stepped path last time we were here (about 11 yrs ago). It seems to have disappeared now.

Then dropped from Garbh bealach south into the corrie, heading for Gleann nam Fiadh. Here we made a mistake, attempting to pick up the path marked at NH 153 260. This doesn’t exist in any meaningful way. We’d forgotten that the best route slides SE down from NH 154 262 (on a fine old unmarked stalkers path).

From here the path down Gleann nam Fiadh is a bit on the soupy side, a bit teeth-grinding at the end of the day.

A fair number of marsh flowers on show – quite a few butterfly orchids on the descent from Am Meallan, less common to see. 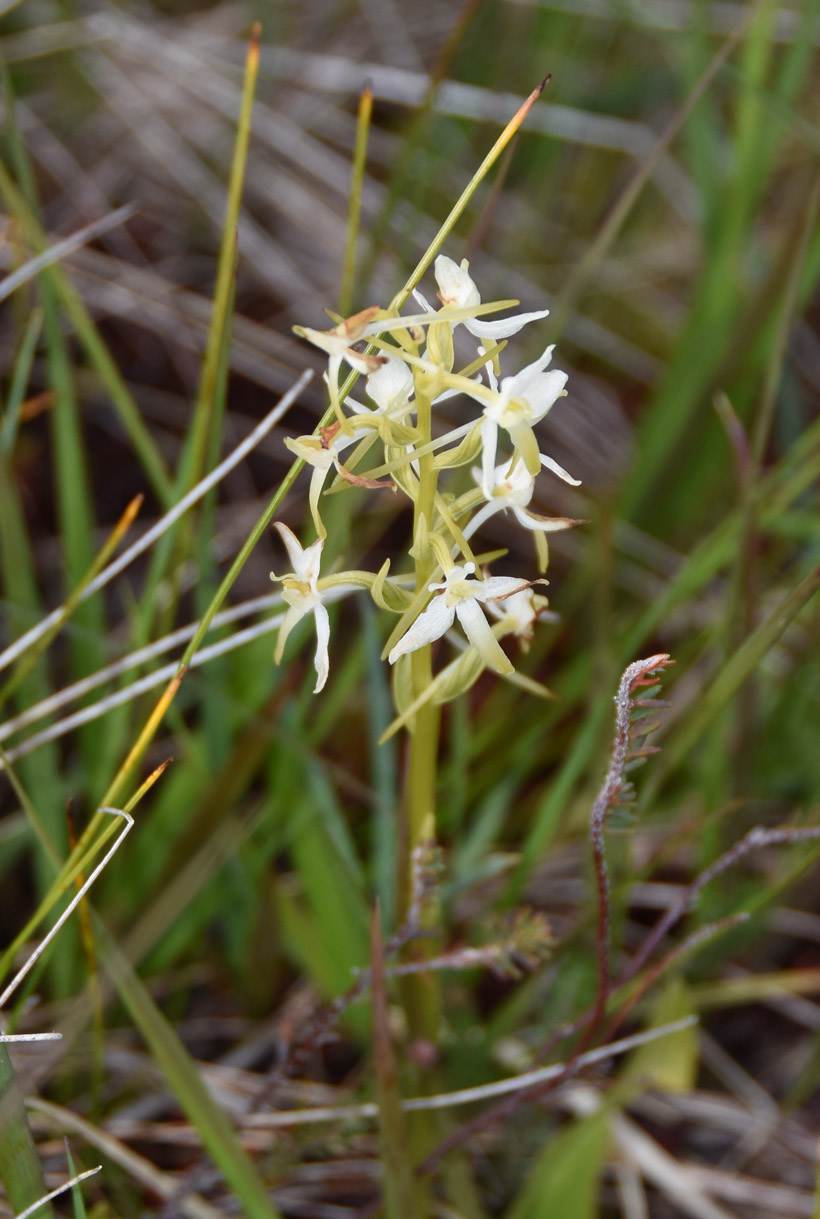 The skies were clearing substantially into the evening – would have been a fine high camp night for those that had bit the bullet. Glen Affric was looking fine as well. 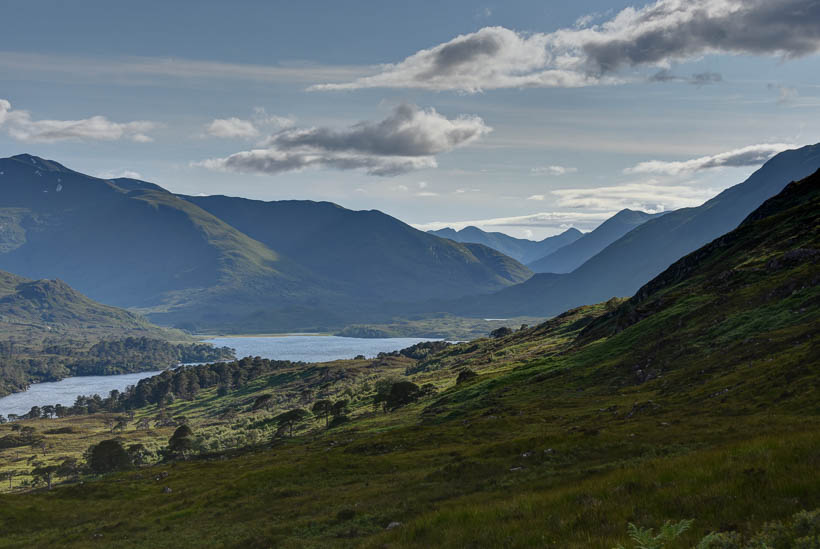 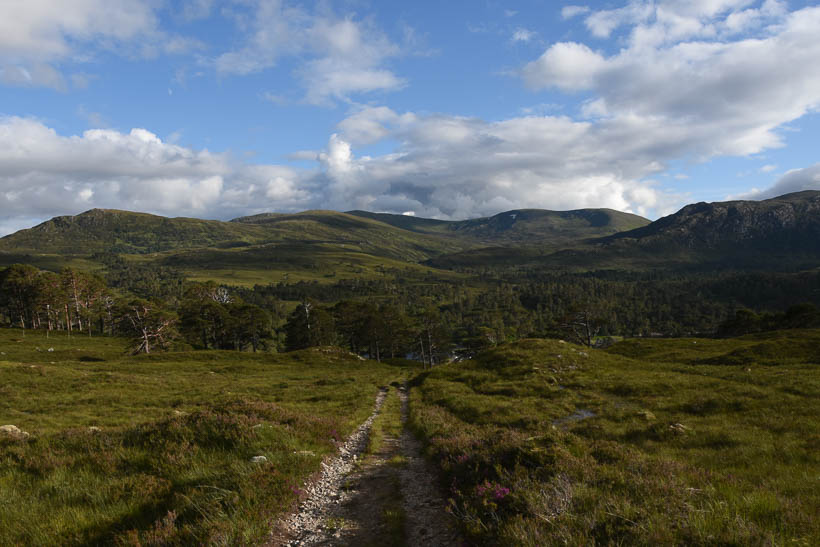 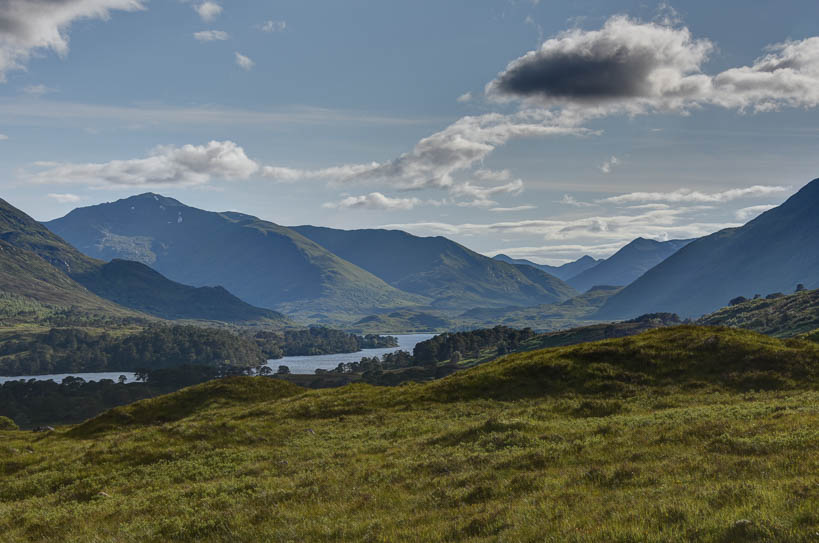 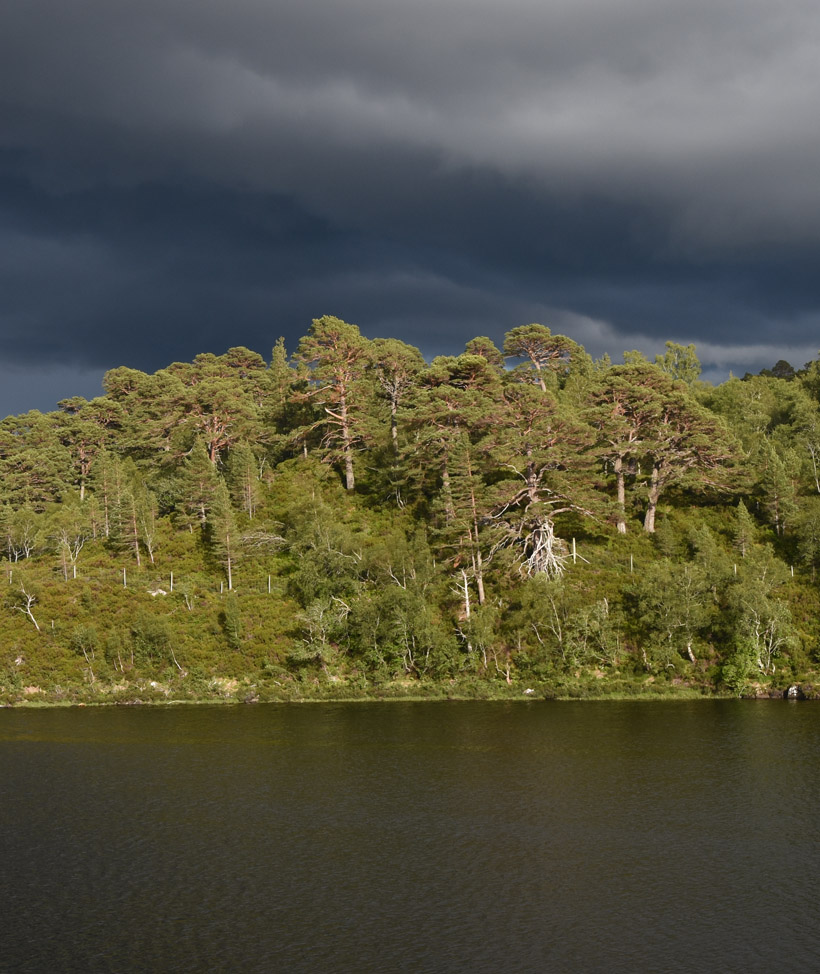 Back to the car for about 7pm – a combination of summer deconditioning, our usual incapacity to walk more than 100m without finding something to look at, and about 2.5hrs of standstill had us back to the car in 12hours.

Still – only 1 SHiller was back at the accommodation before us at 1930hrs so we didn’t miss any partying.

A good walk – certainly Sgurr na Lapaich is our go-to ascent in the area. Need to plan a better return leg though.