Summer 2015 was marching to a close, having been pretty consistent – cr*p.

With a wide range of Skye options on the “to do” list it was apparent that getting above 2000ft would be a route into clag.

Decided to head round the Elgol road to wander along the ridge between Kilmarie and Elgol.

Parked at the large car park just west of Kilmarie at the track to Camasunary. The cutting northerly was a bit blunted by Bla Bheinn and so it was a warm wander uphill to Am Mam.

Once up to the bealach we turned left to head up Beinn Leacach. Sgurrna Stri and the Cuillin were a bit clagged across Loch Skavaig.

Sgurr na Stri from Am Mam: 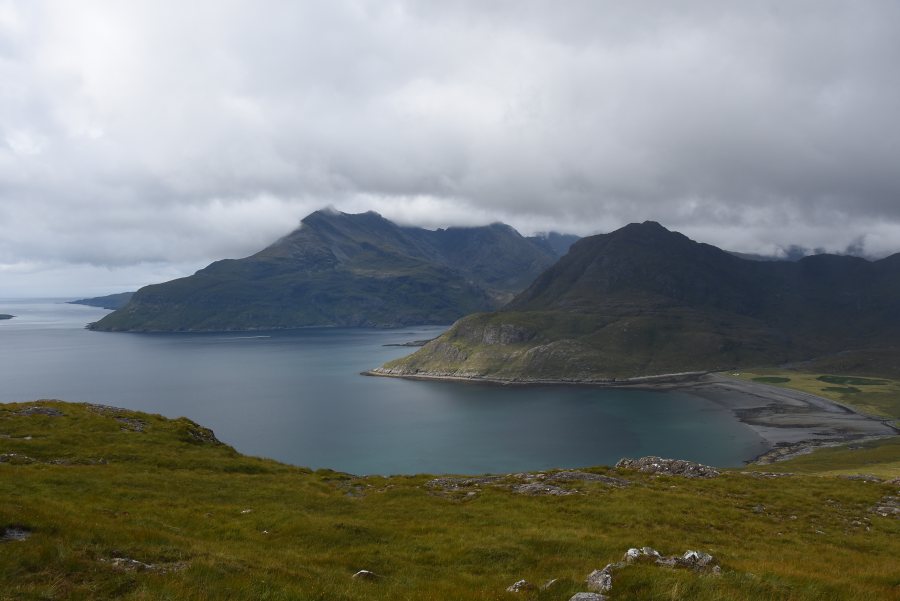 About 1km of marshy ground to the summit of Beinn Leacach, not a bad viewpoint. Air clarity was excellent with views south to the Treshnish Isles and SW out as far as Mingulay. 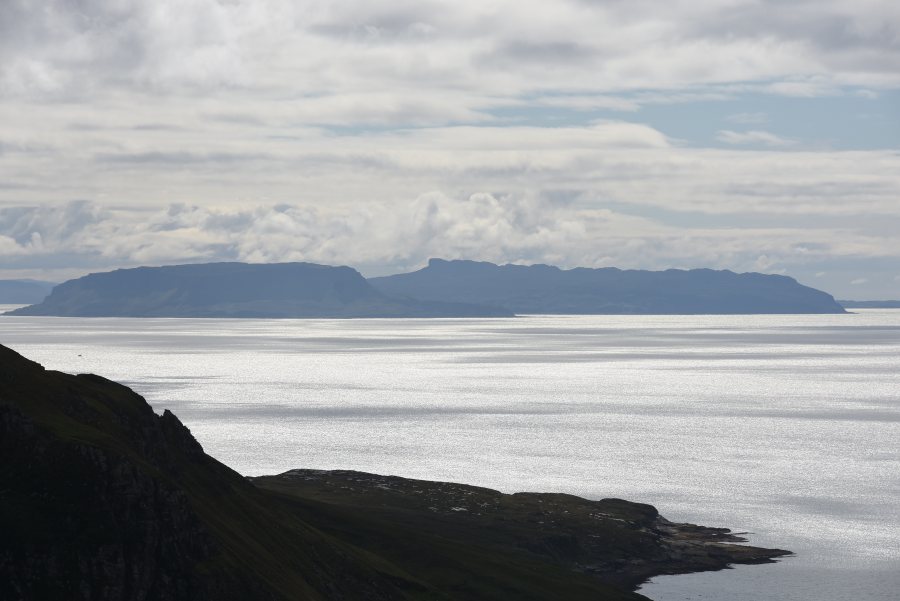 Sat and had our lunch on Beinn Leacach, watched the boats zipping back and forth from Elgol to Coruisk. 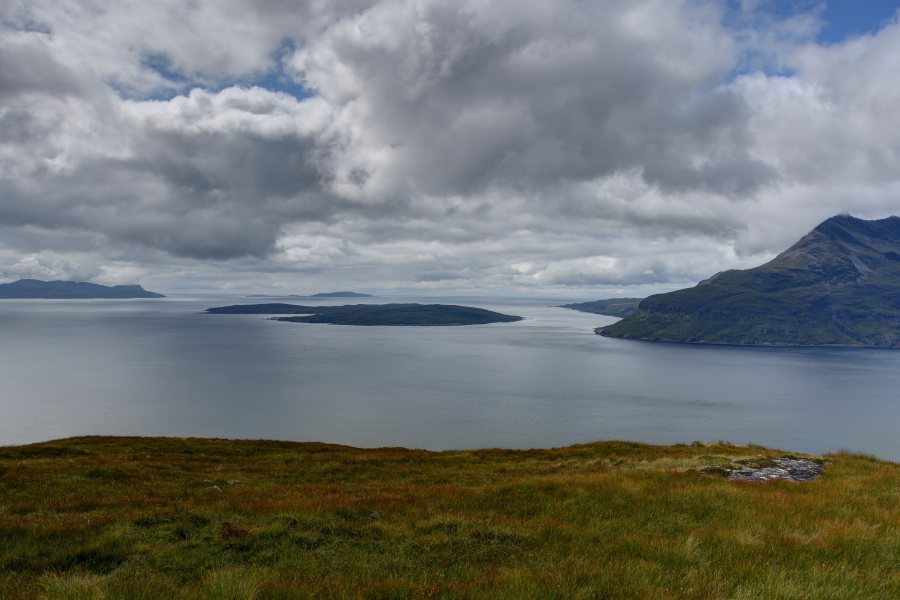 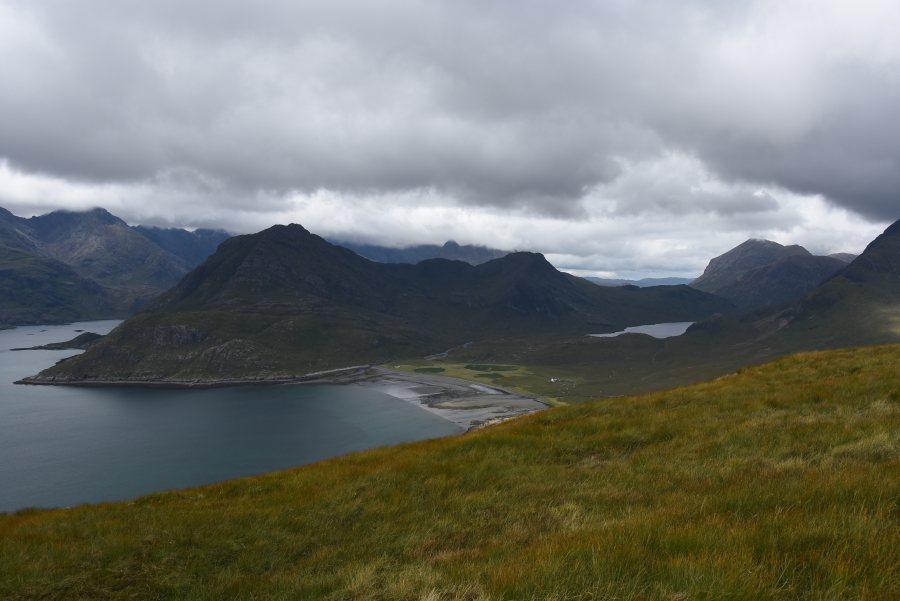 Dropped east off Beinn Leacach and then on up Ben Meabost, one fence had a barbless crossing point.

Ben Meabost’s east flank is a rising cliffline, the southern end of which has the summit and clear views south. 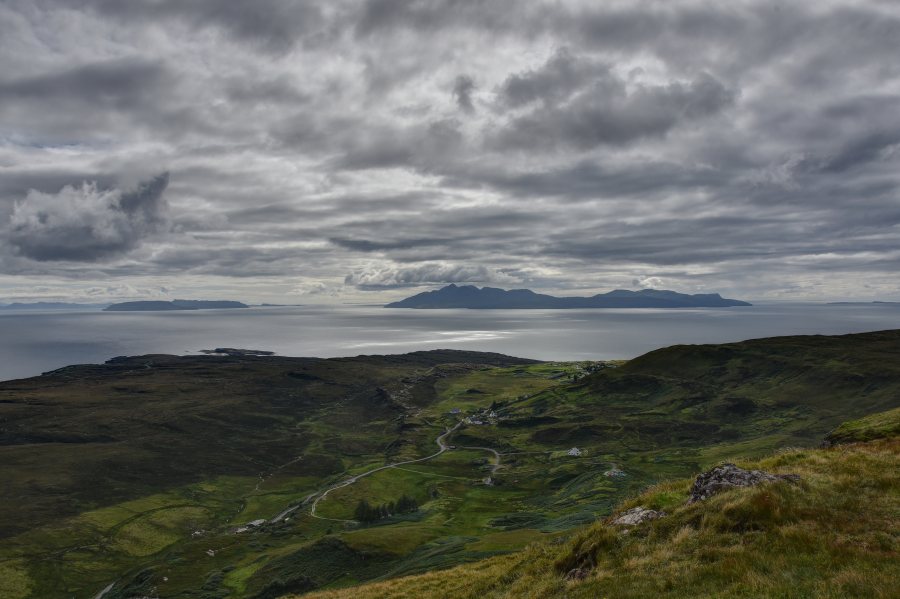 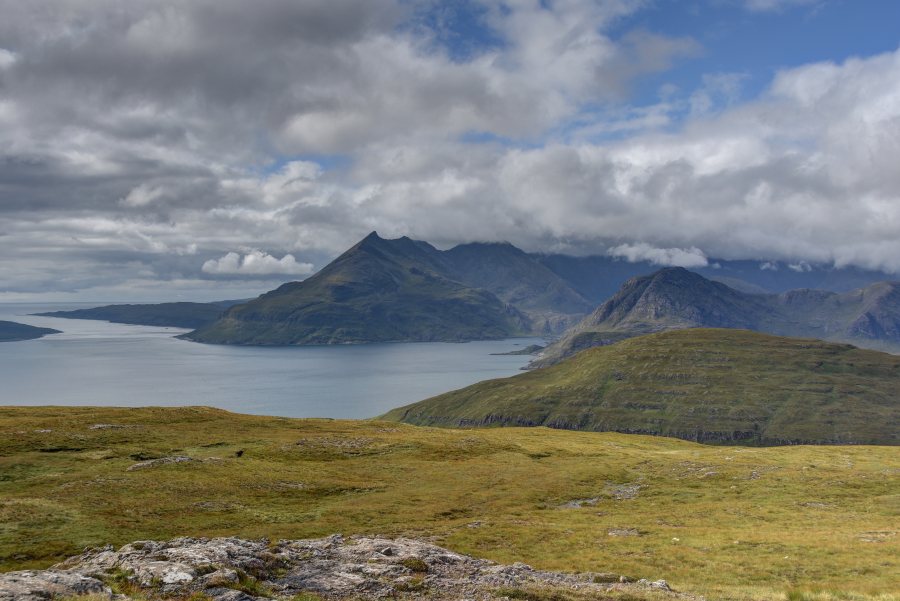 We were playing spot the island for a while. 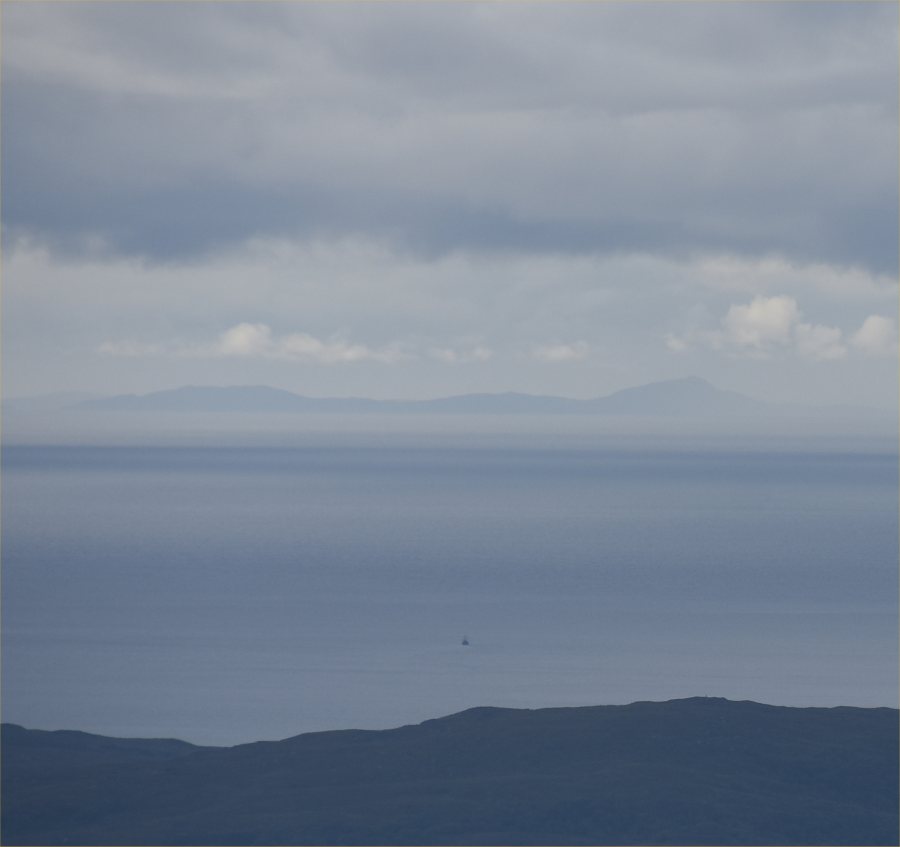 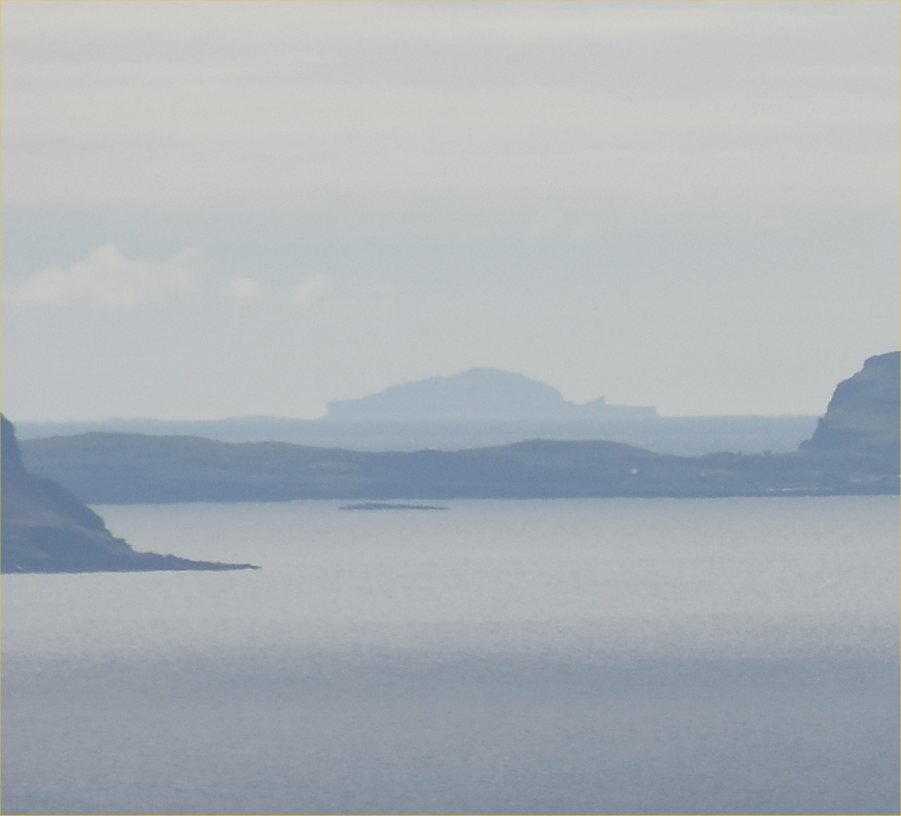 The Stevenson lighthouse of Oigh-sgeir always catches our attention. 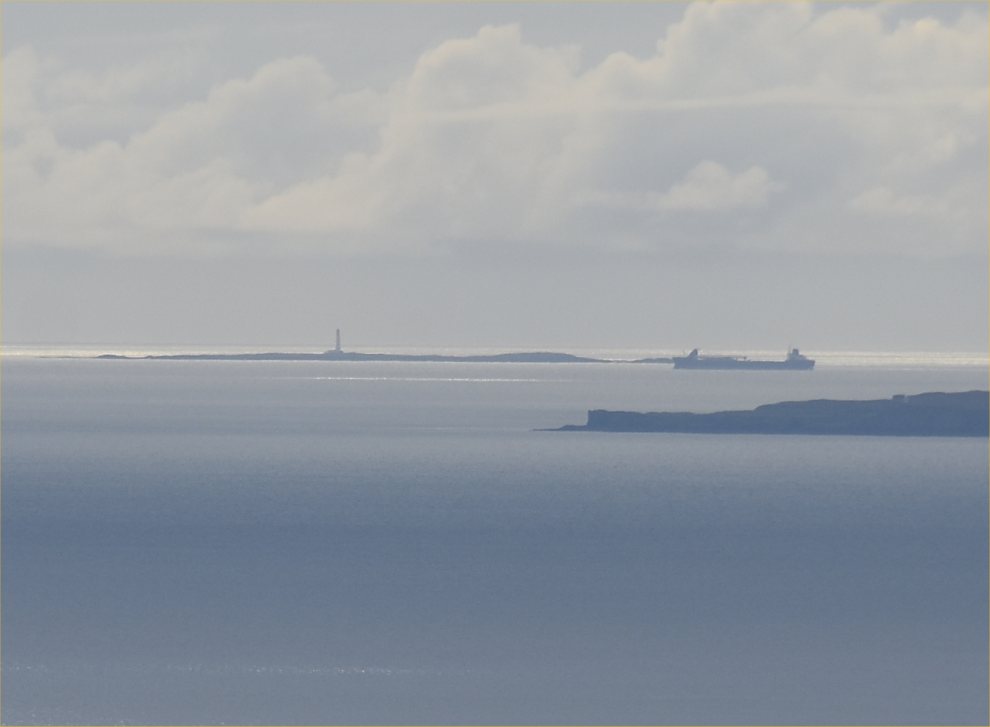 Looking at the maps we’d thought that the hill over Elgol, the off-list Ben Cleat, might have the best views. The day was improving so we headed that way. Only an 80m reclimb from the bealach.

True to the maps we reckoned the views from here were the best of the day. It would make a superlative pitch site some day, just 150m up from the road.

Sat around on this one for nearly an hour, just enjoying the scene. 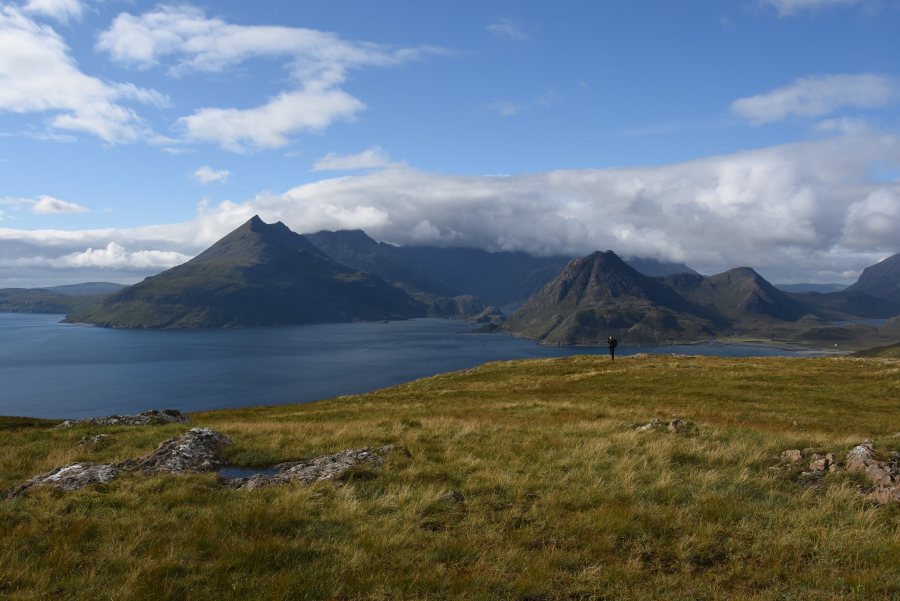 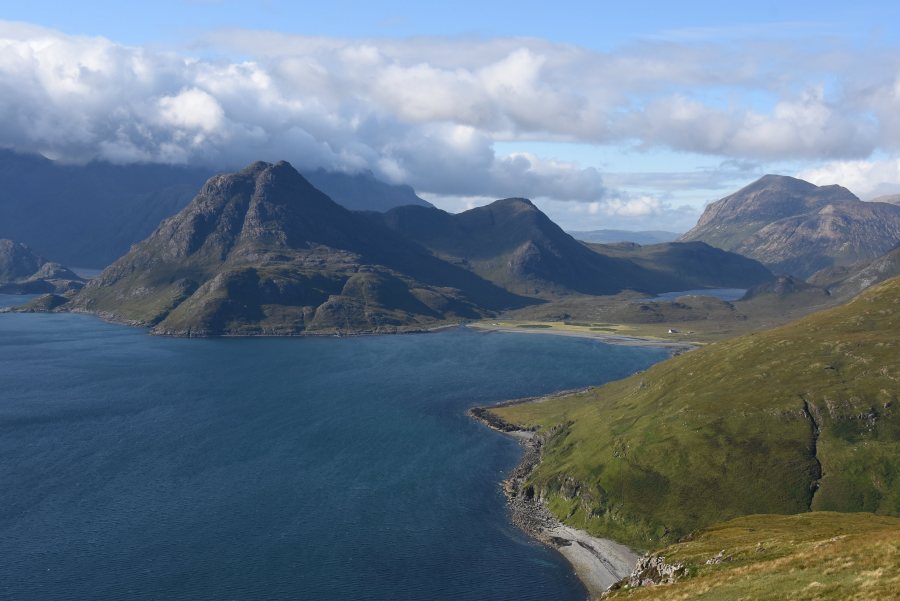 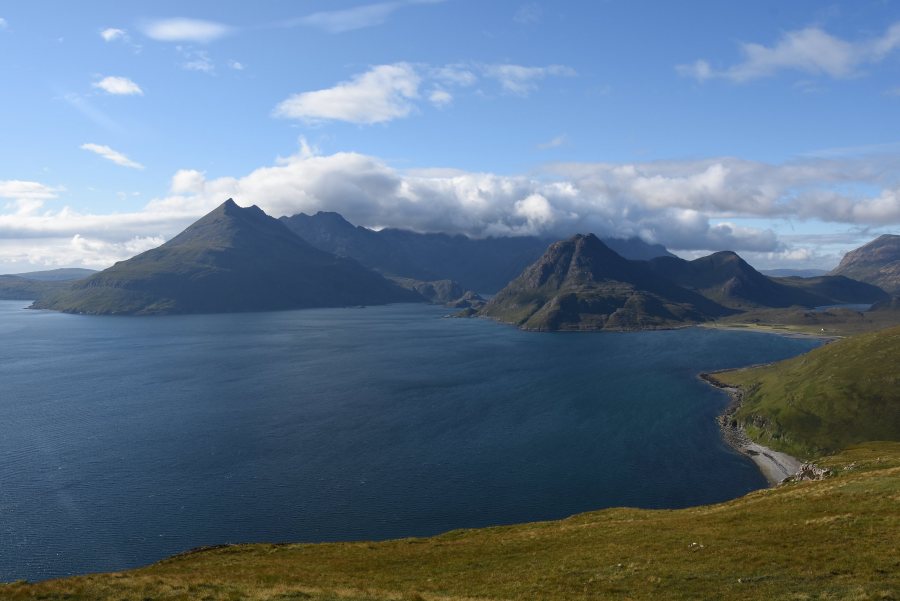 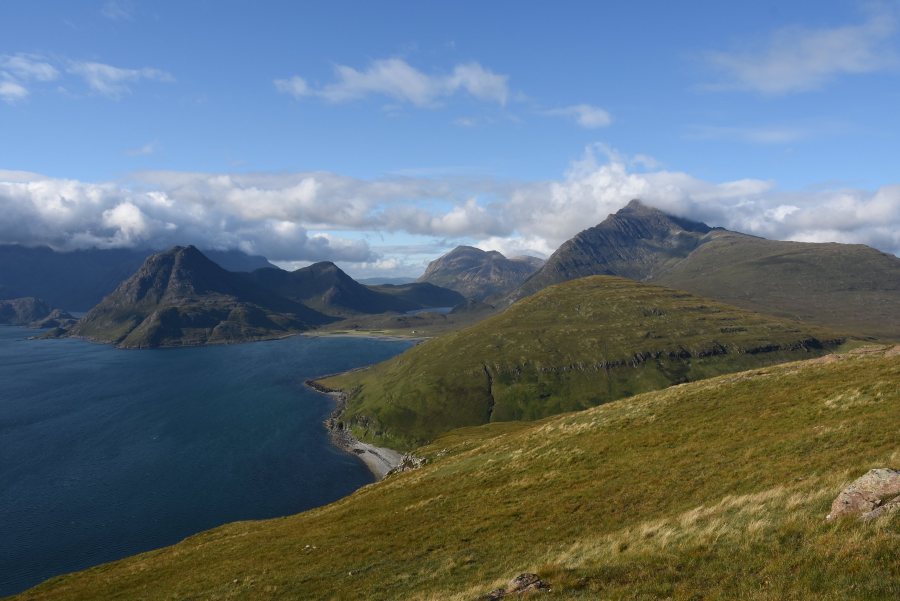 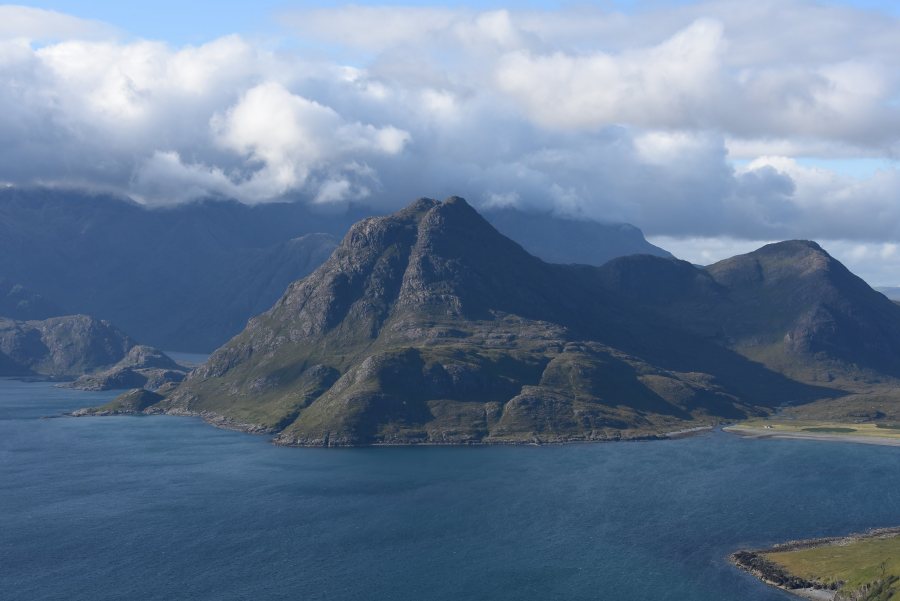 Dragged ourselves away and dropped east towards the reservoir. A few fences here and there, managed out with one clamber over a low barbed wire fence. There’s an obvious depot area at about NG 531 151 which has a track leading down to the road.

From here we walked 1.5km along the road and then cut off the road to take the path from Drinan to Kilmarie nearer the coast back to the car. 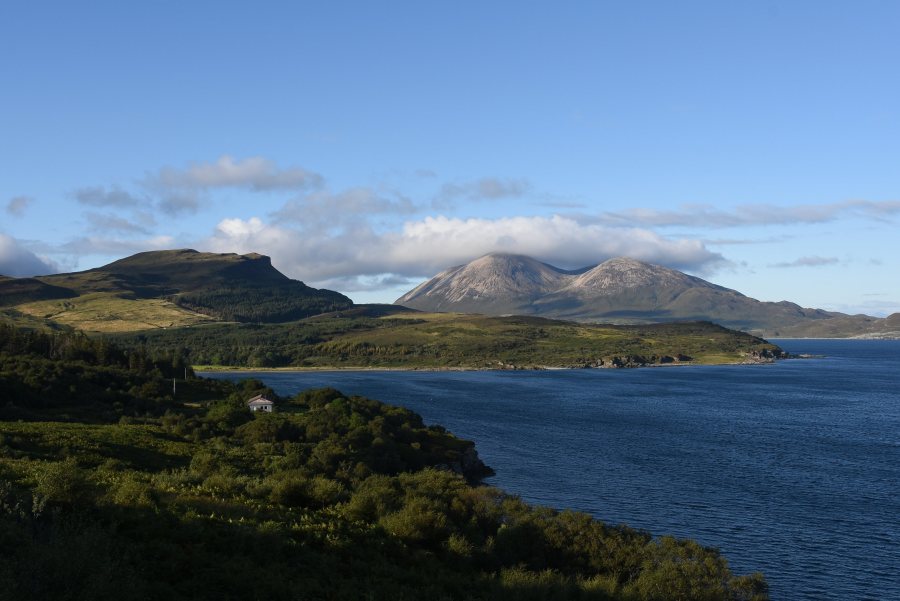 A nice walk, better than expected conditions. As expected the Marilyn’s view wasn’t as good as Ben Cleat, which has to be a long way up the list of minimal effort, maximal views hills. I can see a camp on Ben Cleat being on some day.