It’s not been the best of winters, so with a potential western weather window there was feverish planning afoot heading into the weekend. Plumped for a trip to Mull – island trips always a preference.

RET has rolled out across the Hebridean network so the fare has dropped to £30 return for a car and 2 occupants. 

MV Isle of Mull pulled away at 0800, first Calmac bacon rolls of the year were consumed at 0805 and we were on our way to the islands.

A chilly crossing out on deck with some nice views of Eilean Musdile lighthouse at the S end of Lismore. 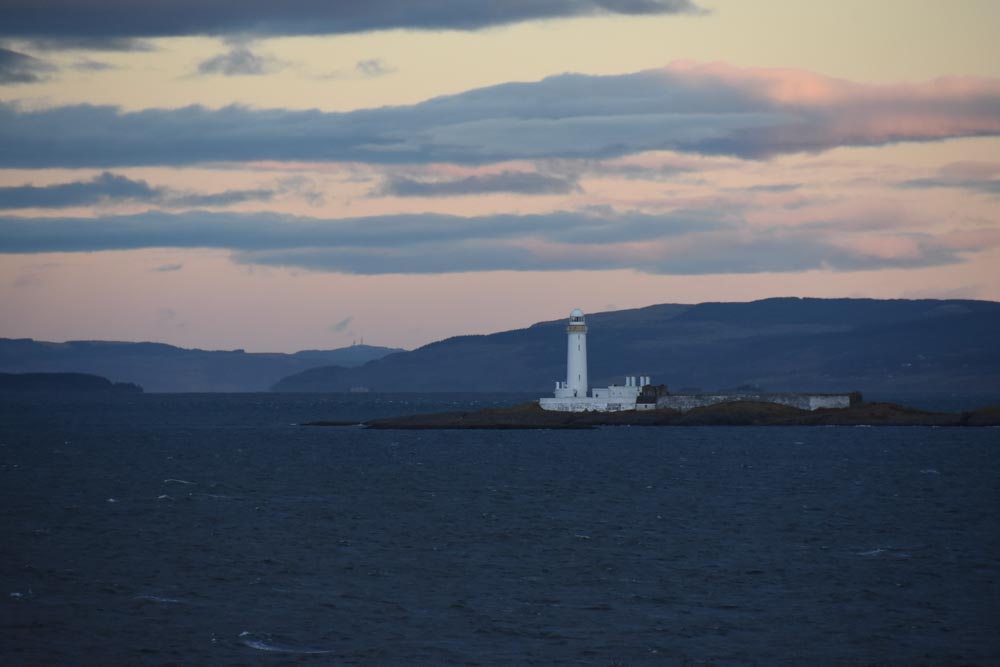 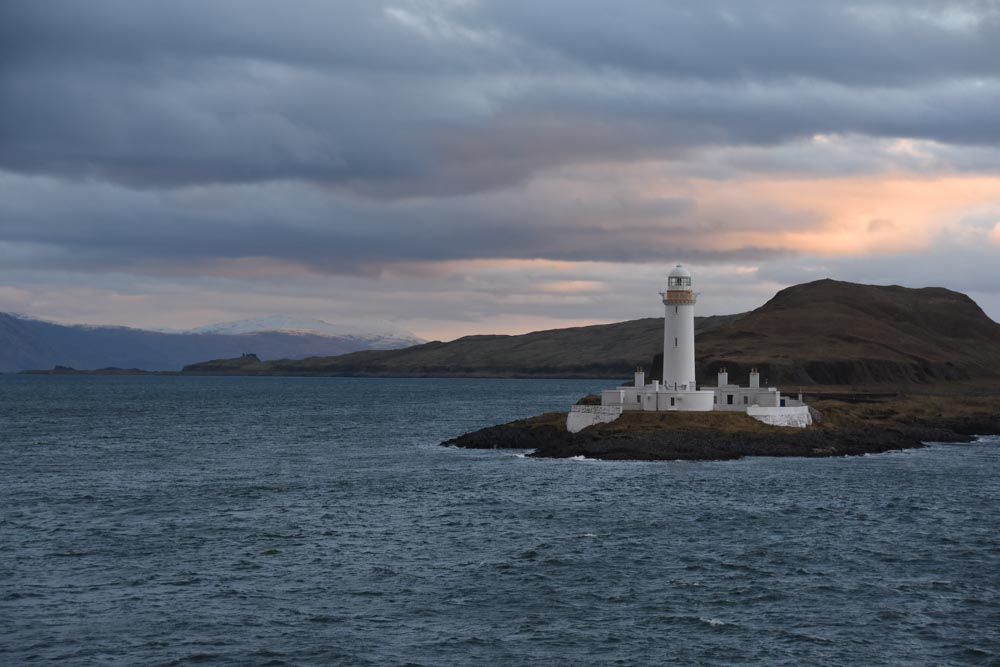 For a few different reasons we’ve not been back up a single island munro, despite spending a large amount of island time in the last few years. Ben More is one we’ve been keen to return to – we combined it with Beinn Fhada and A’Chioch a few years ago but the day was not the best and no views were gained.

When we were on the Ardmeanach S2K Beinn na Sreine we’d noticed an old stalkers zig-zag path heading up from the road to the ridge of Coirc Bheinn. We’d thought about a Ben More approach via this ridge at the time.

The stalker’s path zig-zags uphill, a bit hard to find but I’d plotted an approximate route from a picture. In truth, the terrain is such that you could easily walk straight up, but we like finding these old unmarked tracks.

H at top of stalkers path: 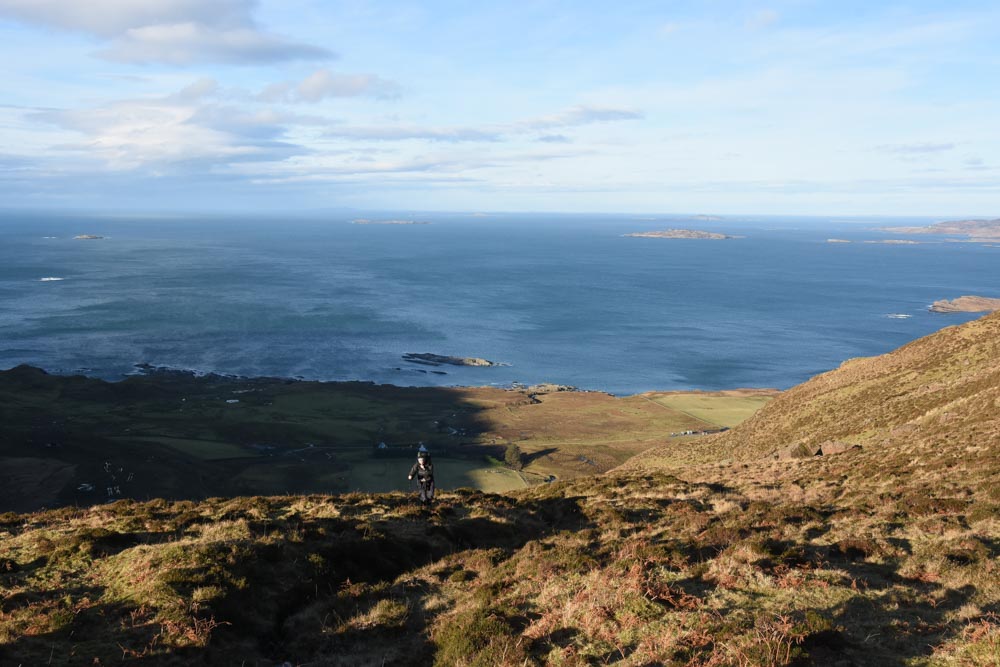 Ben More looks a reasonable distance away once on the higher ground. 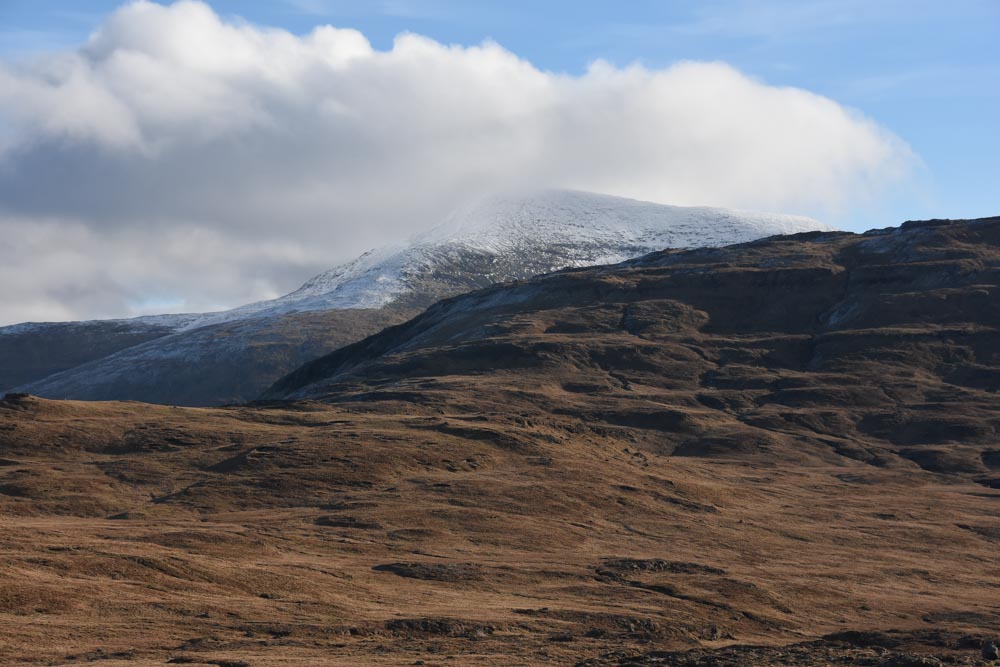 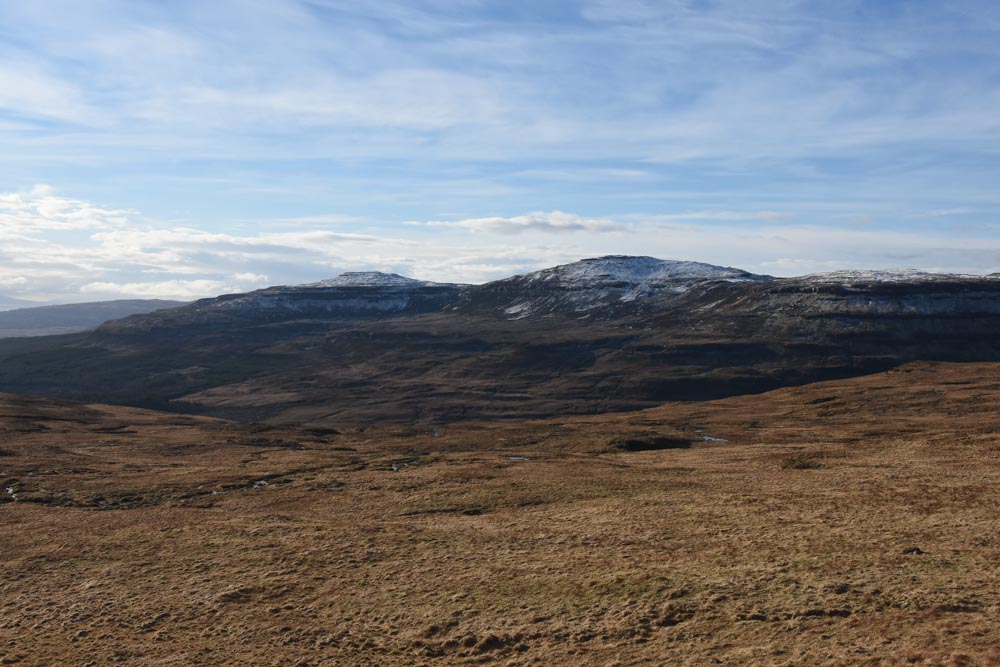 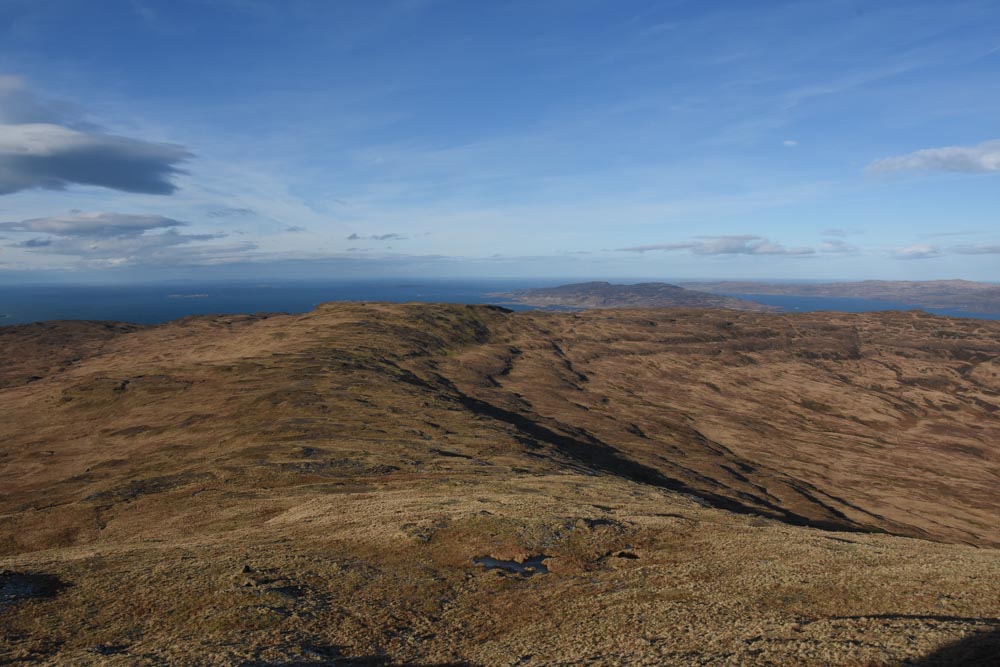 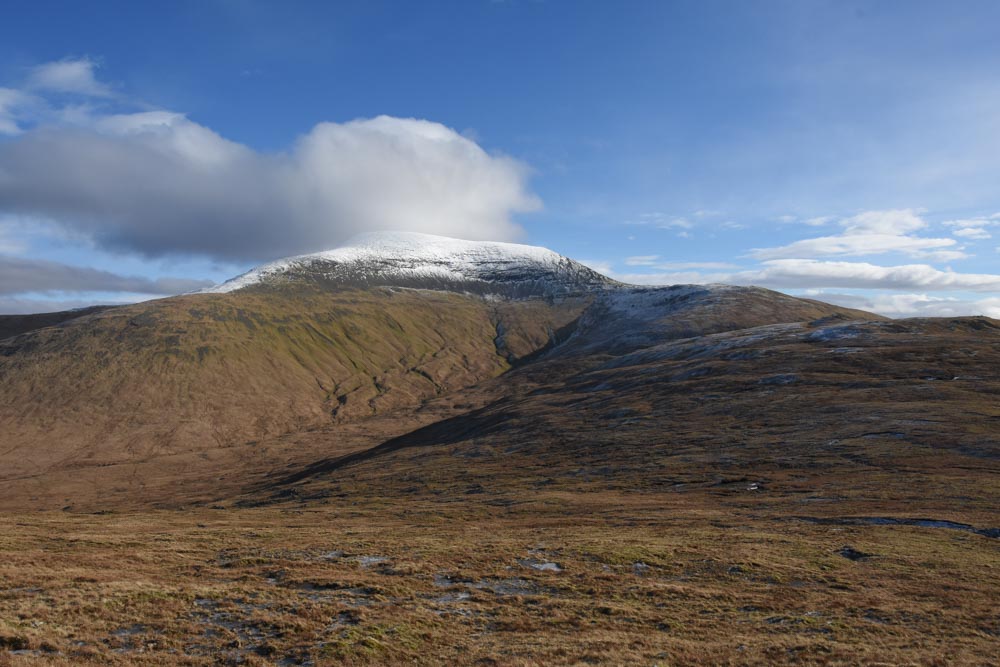 A lot less snow on Mull than the mainland – we didn’t reach even patchy cover until at the 650m level of Maol Nan Damh. 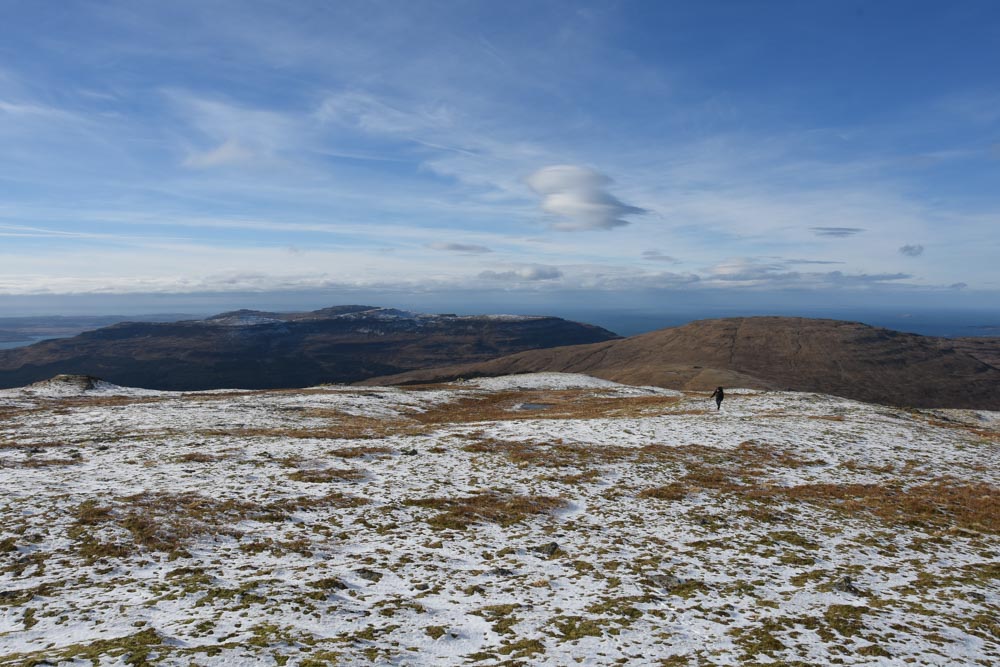 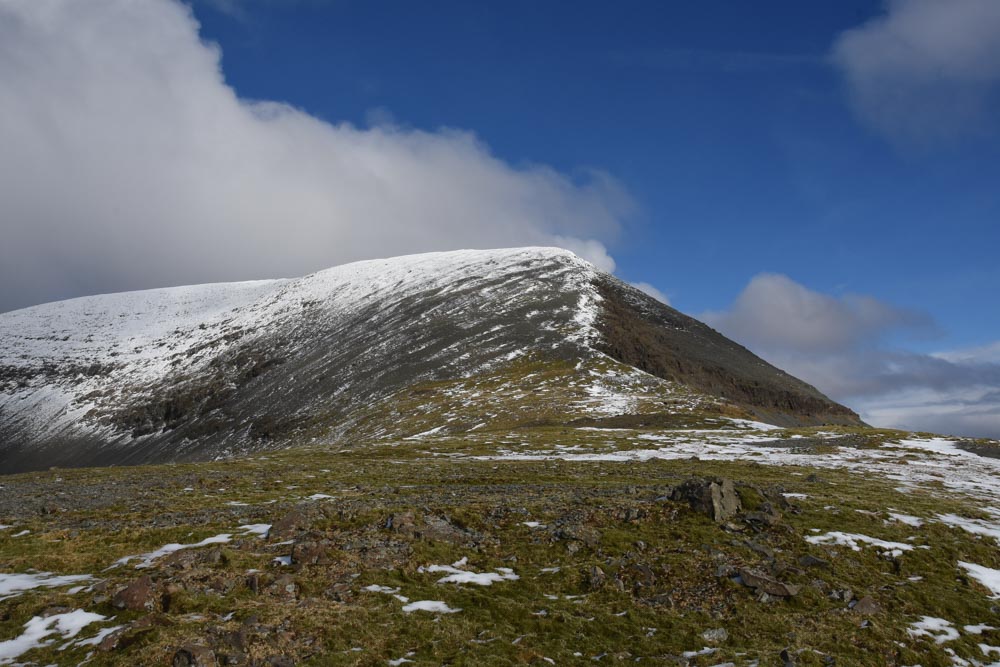 This side of the hill had defrosted to such an extent that we only hit any snow/ice at 30m below the ridge (and only microspikes required). We’d been briskly buffeted all the way up the ridge – the S ridge was a delightful calm zone as the winds crashed into the cliff below us and deflected over the ridge.

Great views from the ridge line. 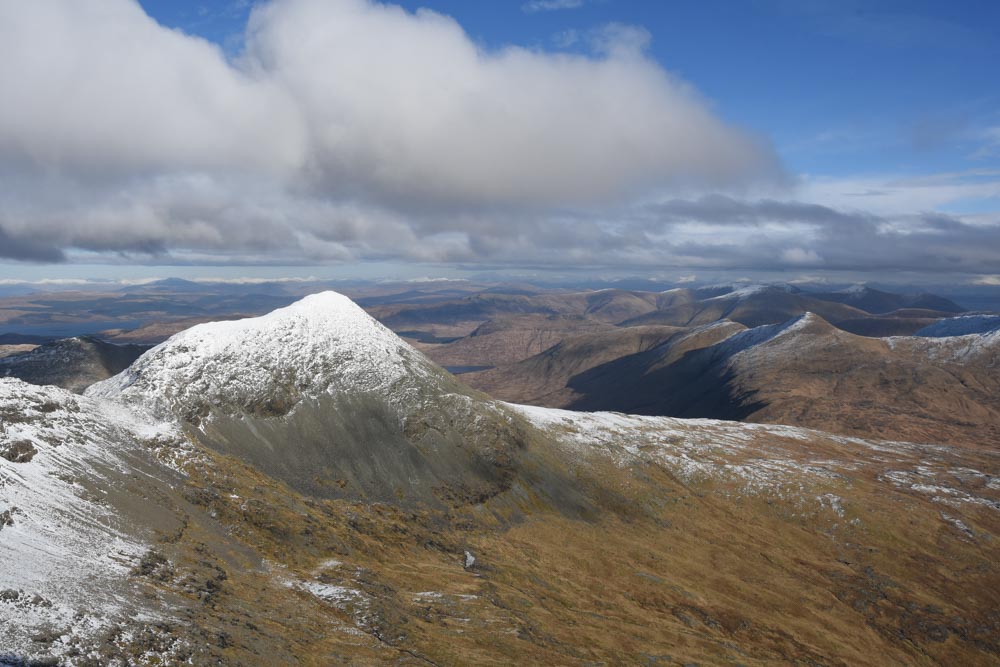 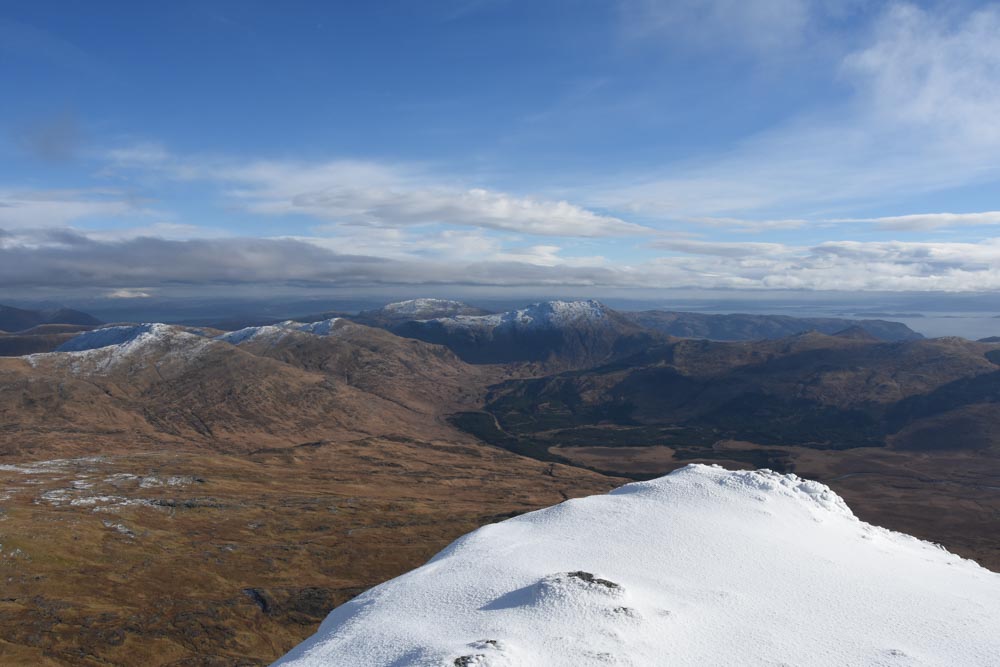 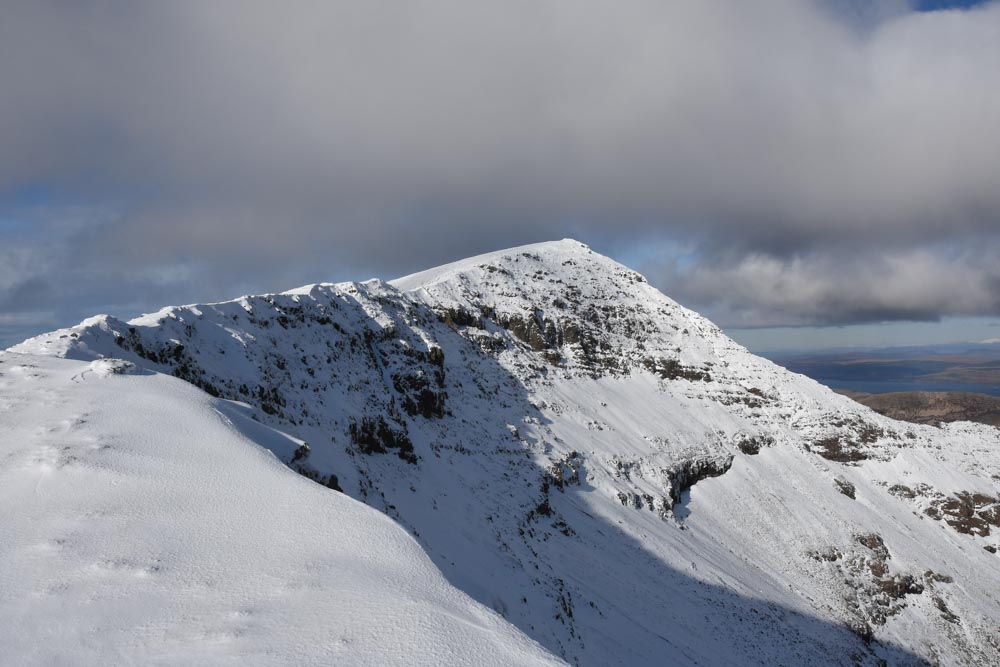 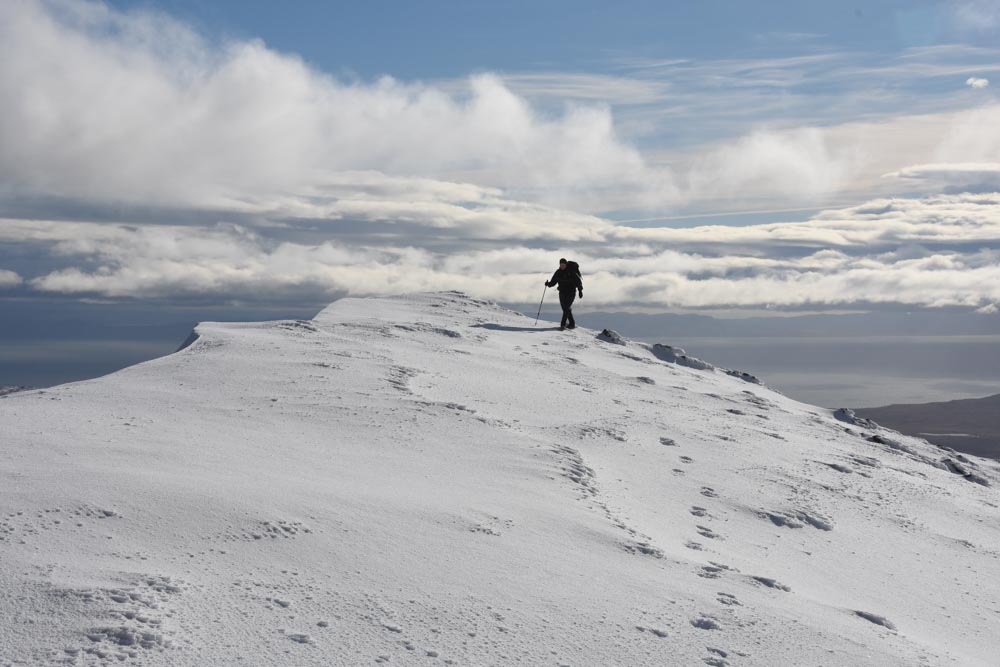 The summit is a simple 600m away with 60m of climb – saw a few folks leaving the summit as we approached.

Another sin atoned as we reached Ben More’s summit with good visibility this time. 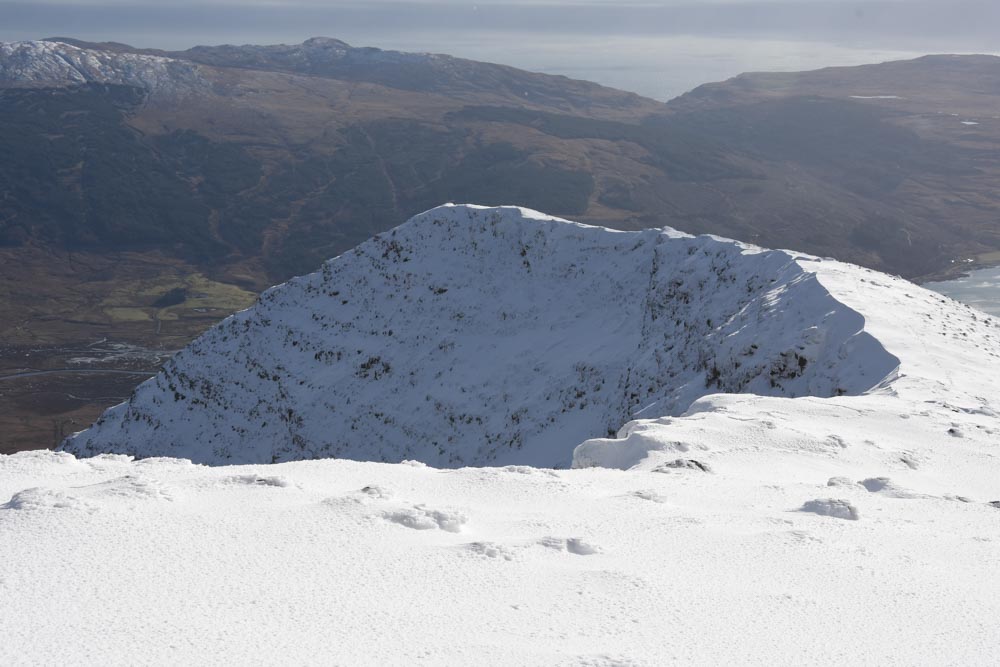 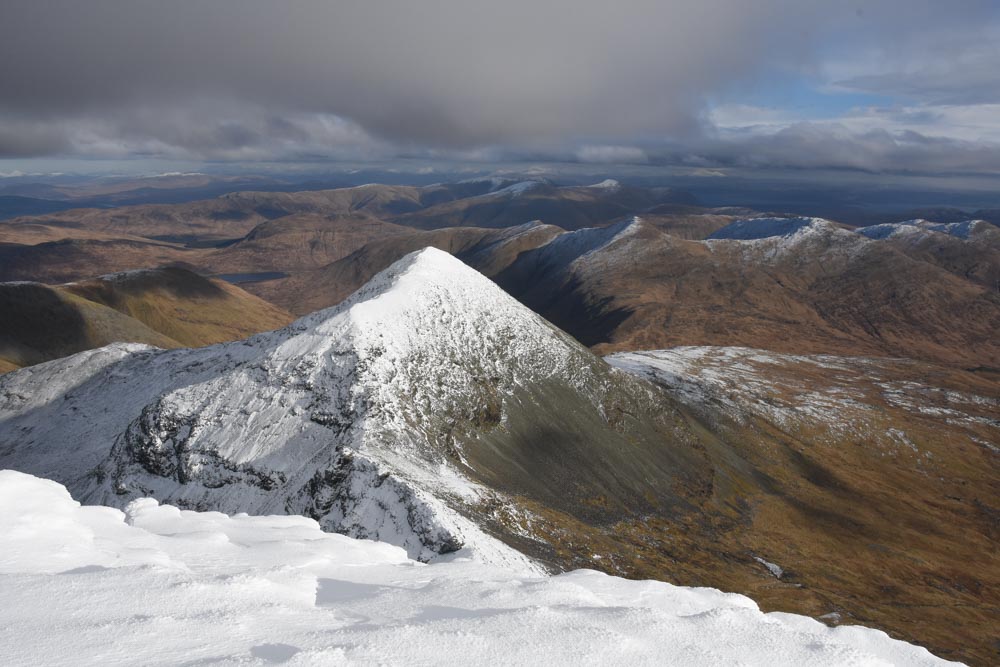 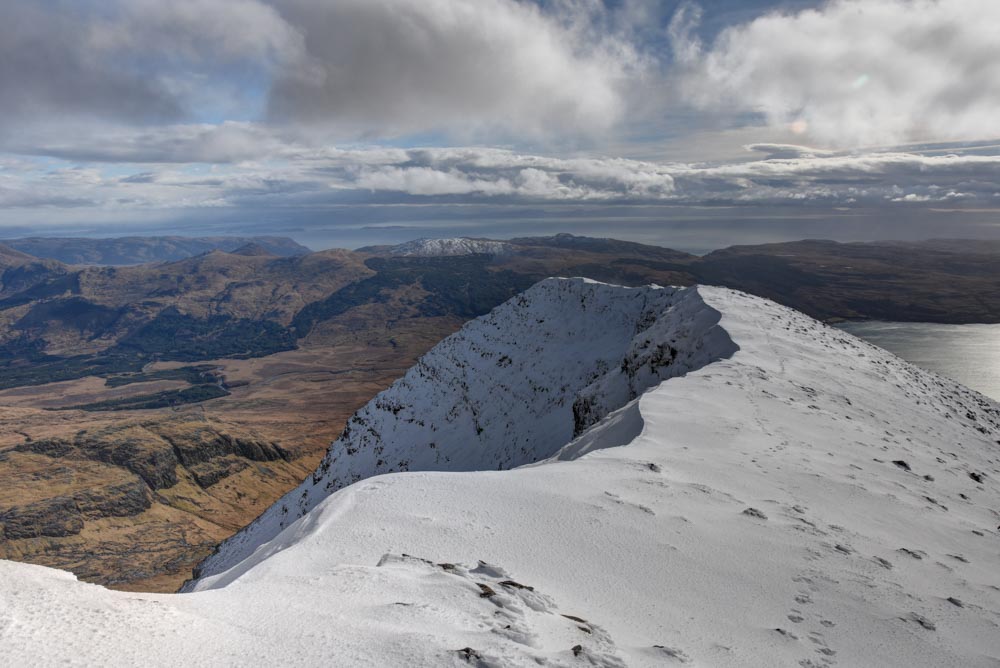 The wind was throwing up attractive spindrift now and then, not always easy to catch in a picture. 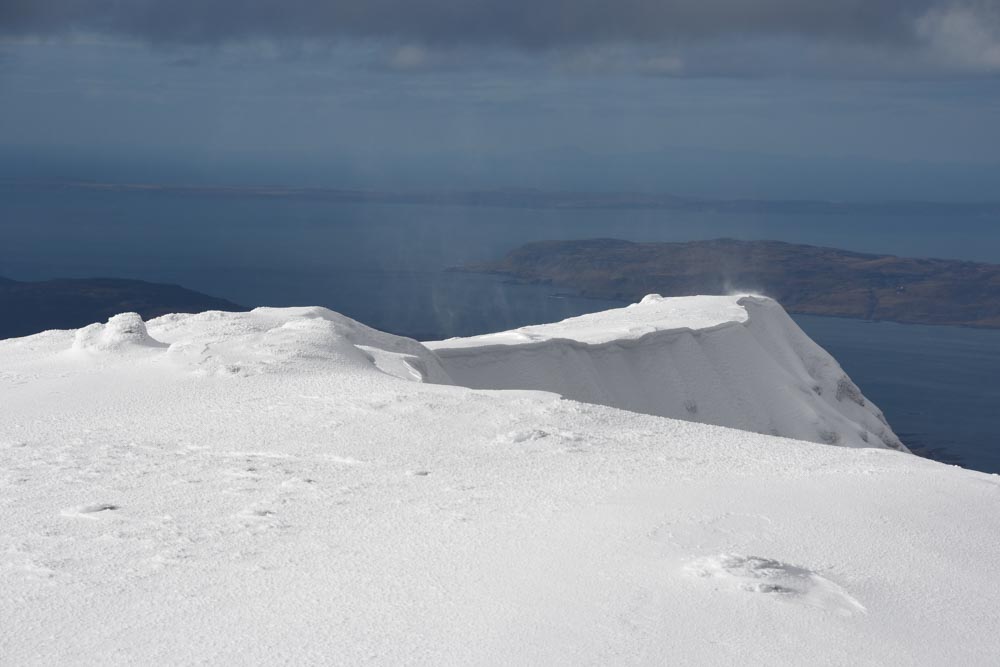 To the north Rum and Skye beyond were visible. 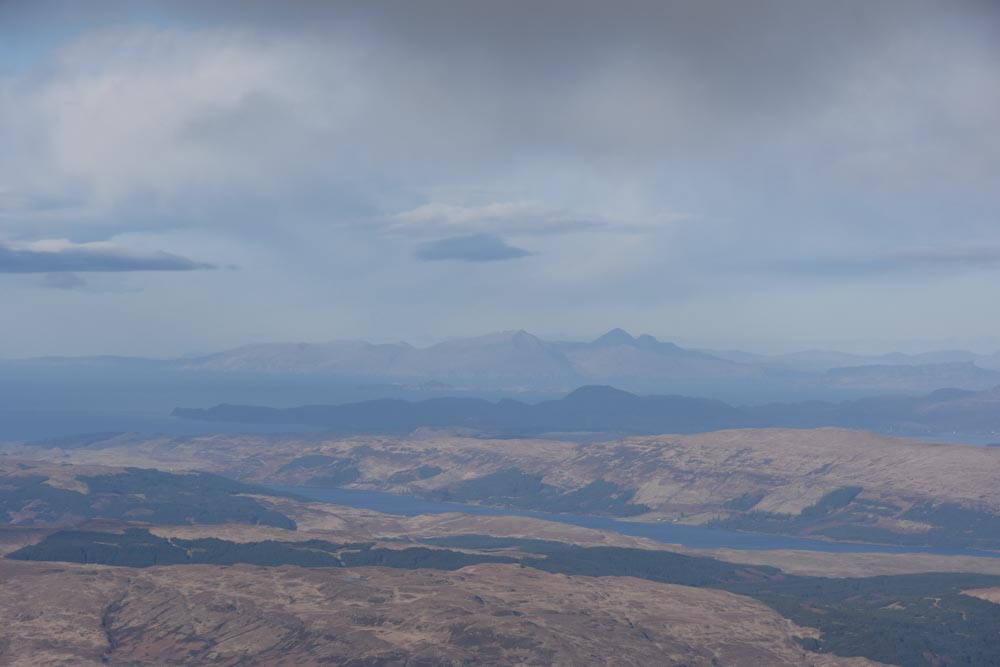 ….and to the NW Coll, Tiree and out to the southern end of the Outer Hebrides. 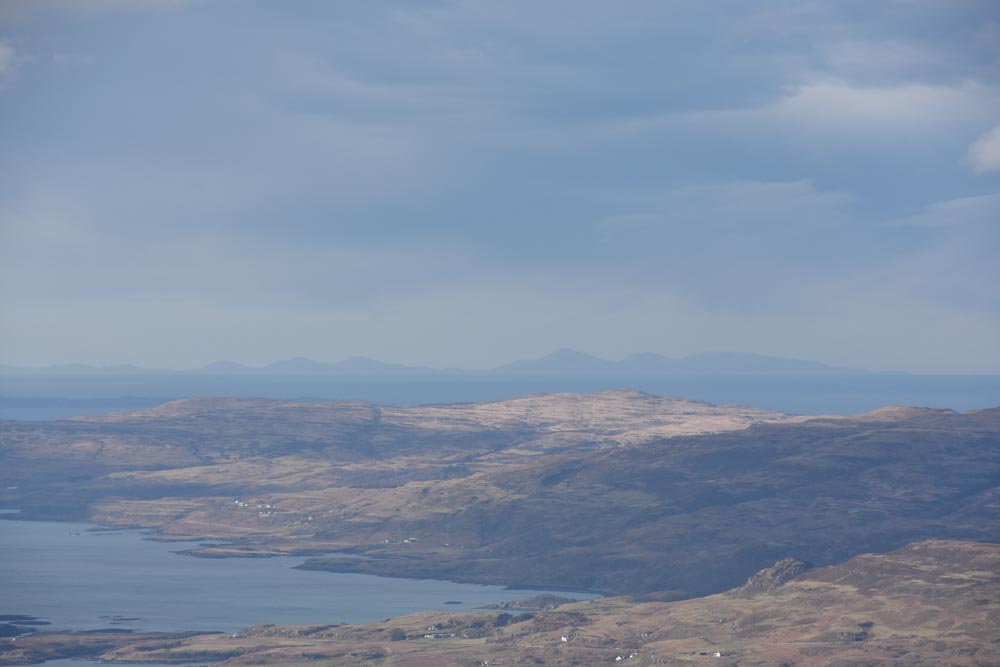 To the south the sun was obscuring the view to Colonsay and Jura. 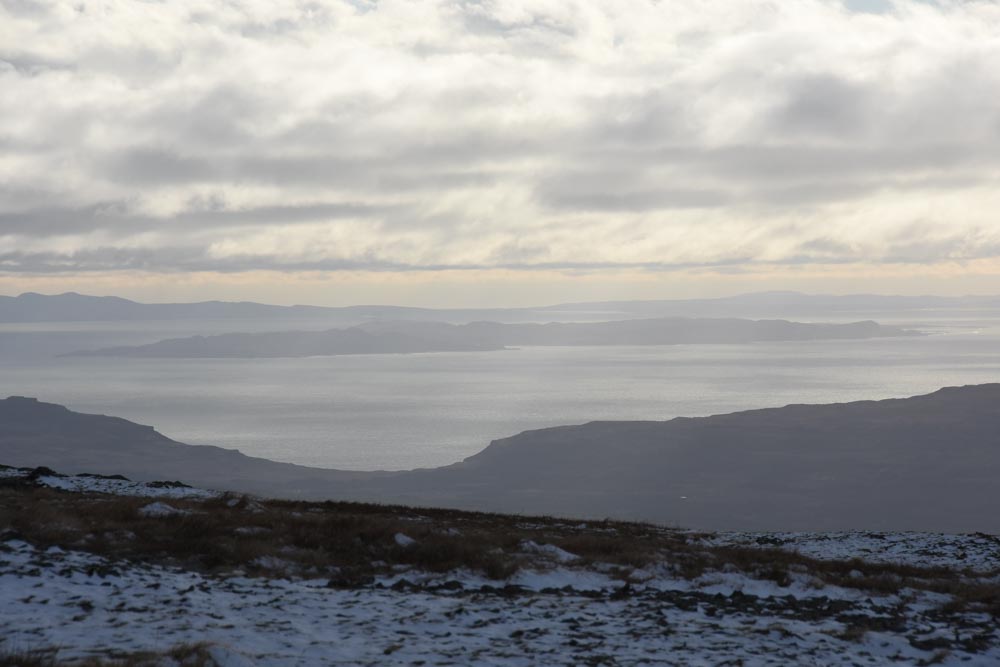 Turned around and headed back the same way, stopping to eat on Maol nan Damh. As we reascended Maol Mheadhonach snow showers which had been approaching from the east finally arrived and the summit was obscured. 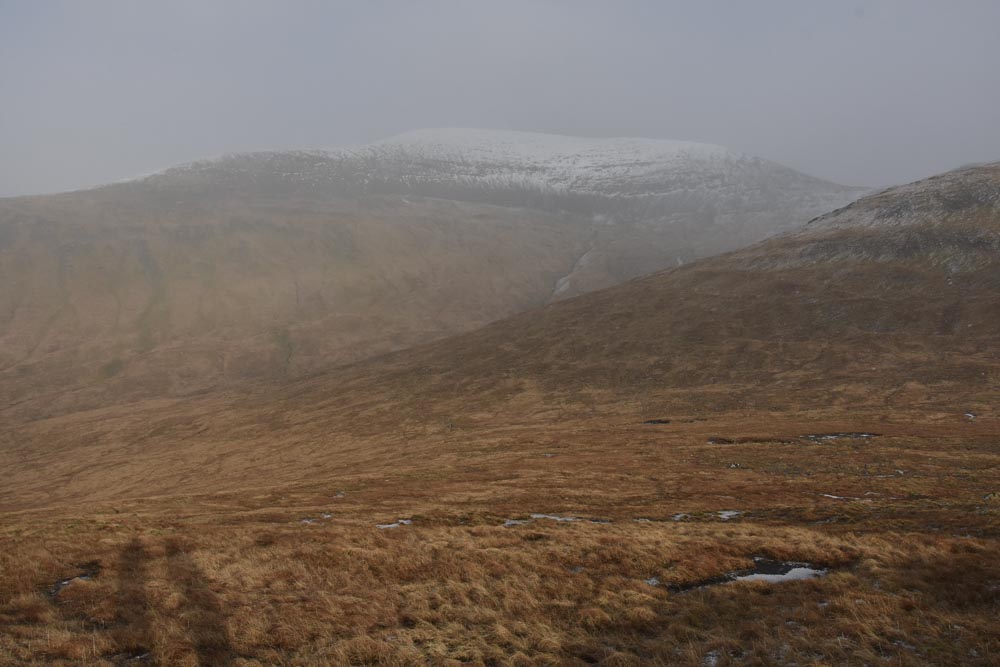 A quick yomp back along the ridge saw us descending to the stalkers path just at sunset. 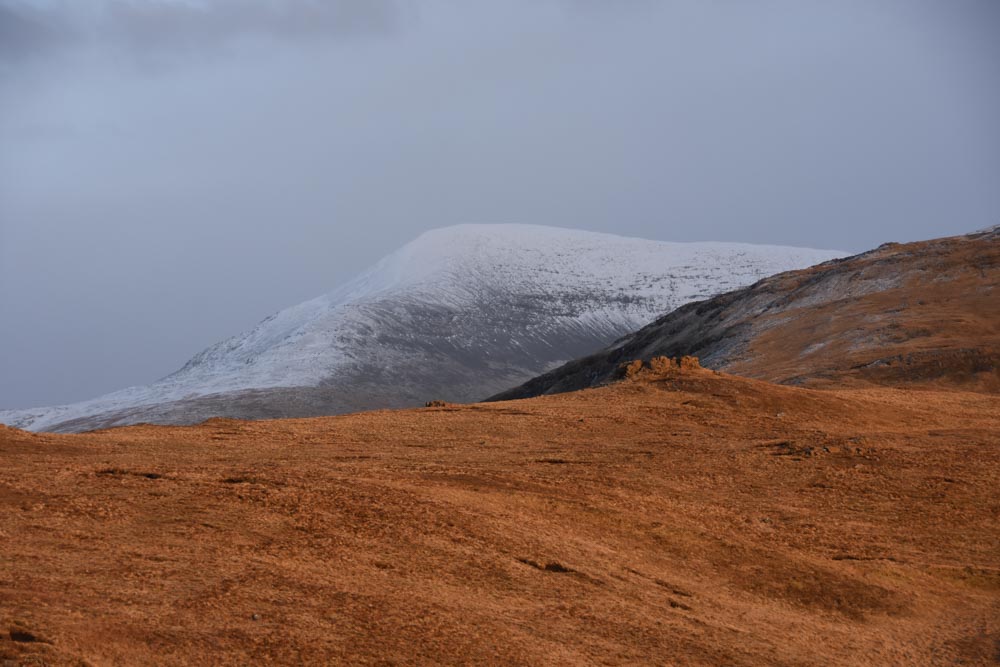 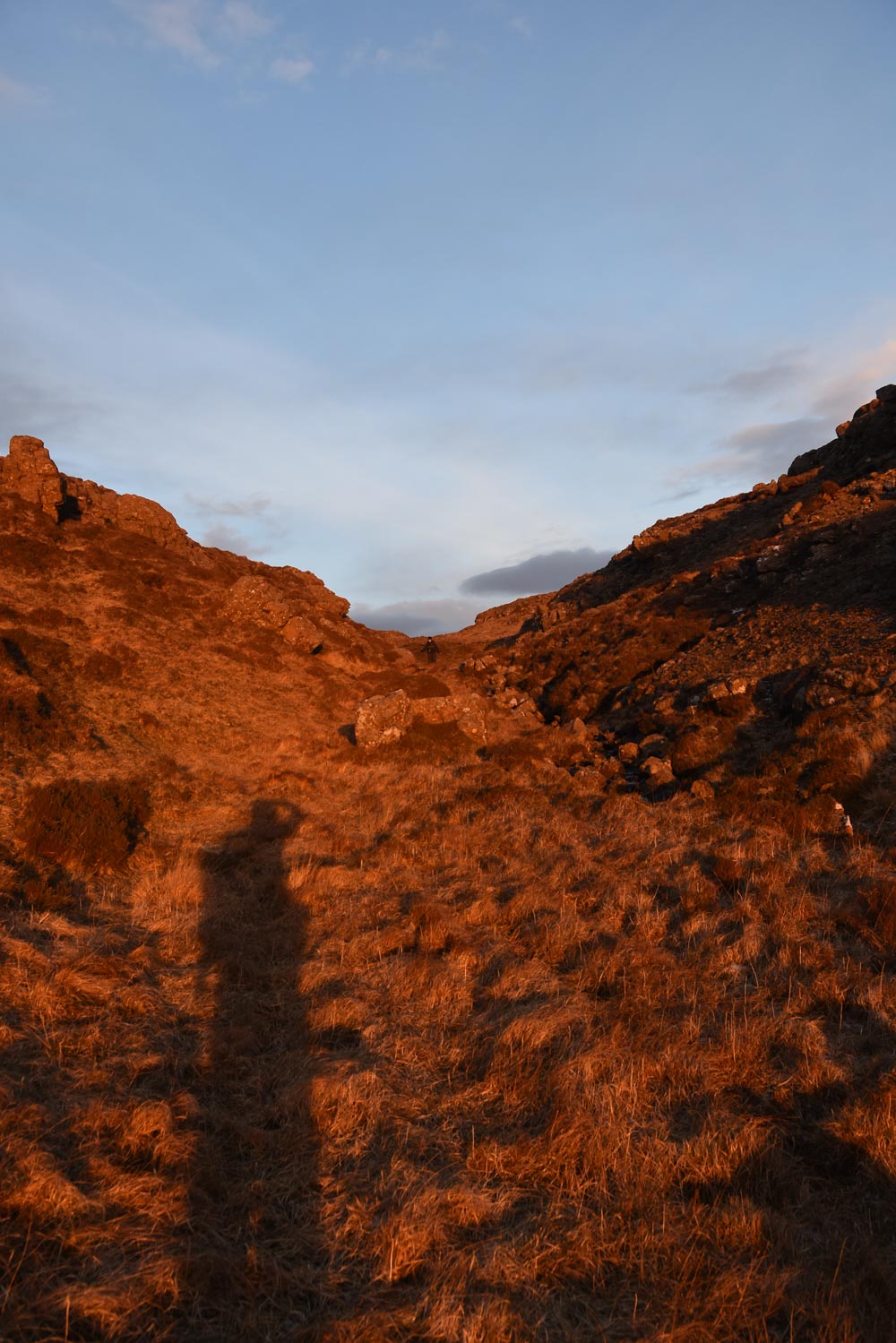 A pleasing day, first island trip of 2016 and a decent day for Ben More. The Beinn Fhada – A’Chioch route to Ben More would remain the more interesting but this was a good winter route for us.