Wednesday dawned claggy. With no sunshine we went on strike and had a lie in.

Eventually struck the tent and walked back to the car park at Luskentyre.

Drove round the coast and scouted out a few off road camp pitches for future reference and then meandered round to Leverburgh to buy some supplies, to be foiled by the fire brigade attending the shopdue to a smoking fridge cabinet.

Lots of Lapwings and redshanks scolding us along.

Wandered across Traigh na Cleabhaig where 4 Arctic Terns took offence and decided to attack me (ignoring Hazel). Washed a bullseye dropping off my T-shirt before carrying on.

Rubh an Teampuill is a nice walk – we’ve camped here and seen porpoises, eagles and even a Basking shark once. 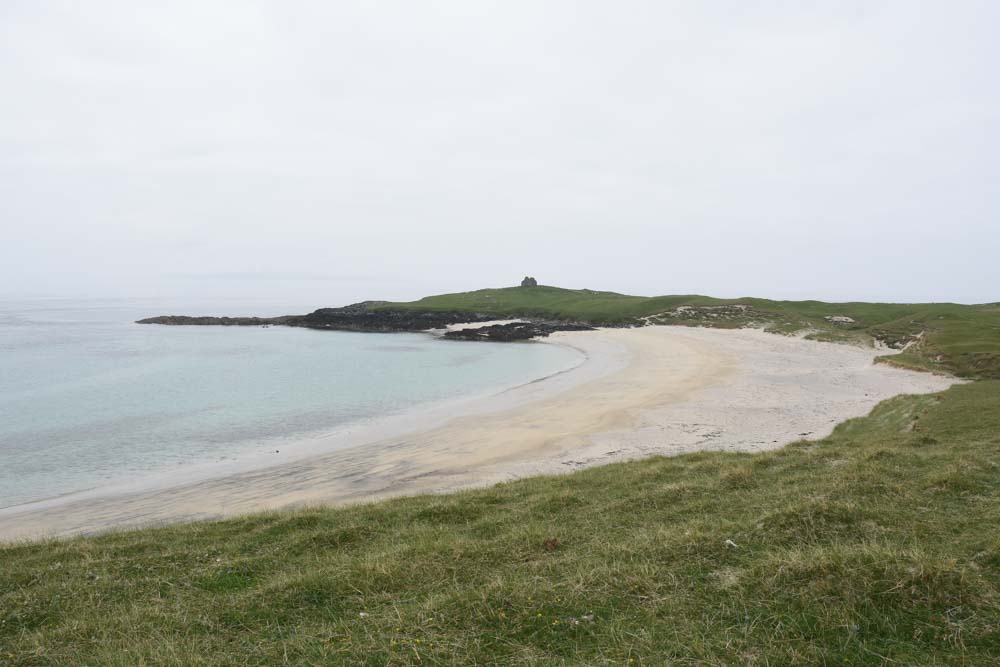 The grey clag was beginning to thin out – we’d wondered about ascending Ceapabhal again, but having been up twice before a claggy ascent was not a goal. 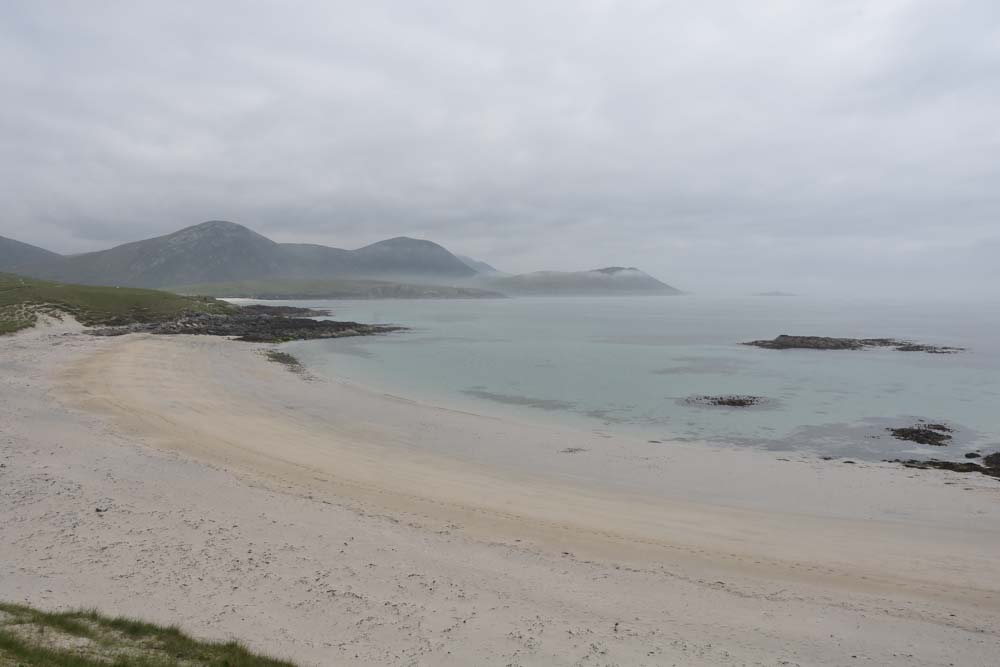 The day was improving though – watched a group of porpoises (including one calf) surfacing a bit offshore.

Sun beginning to burn through: 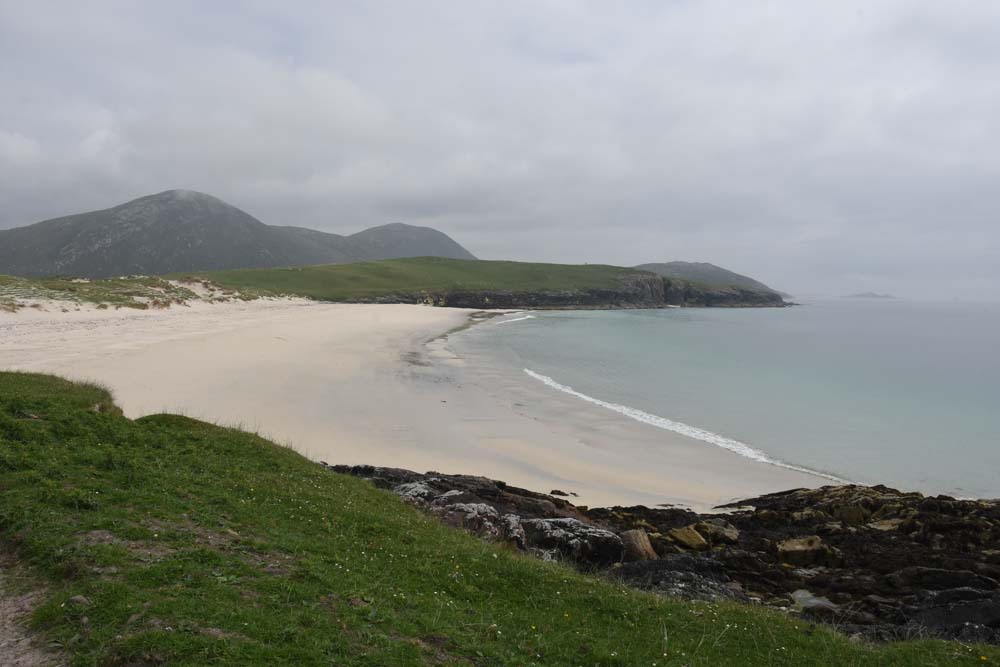 It was beginning to get better as the afternoon was wearing on. We headed back to the car. 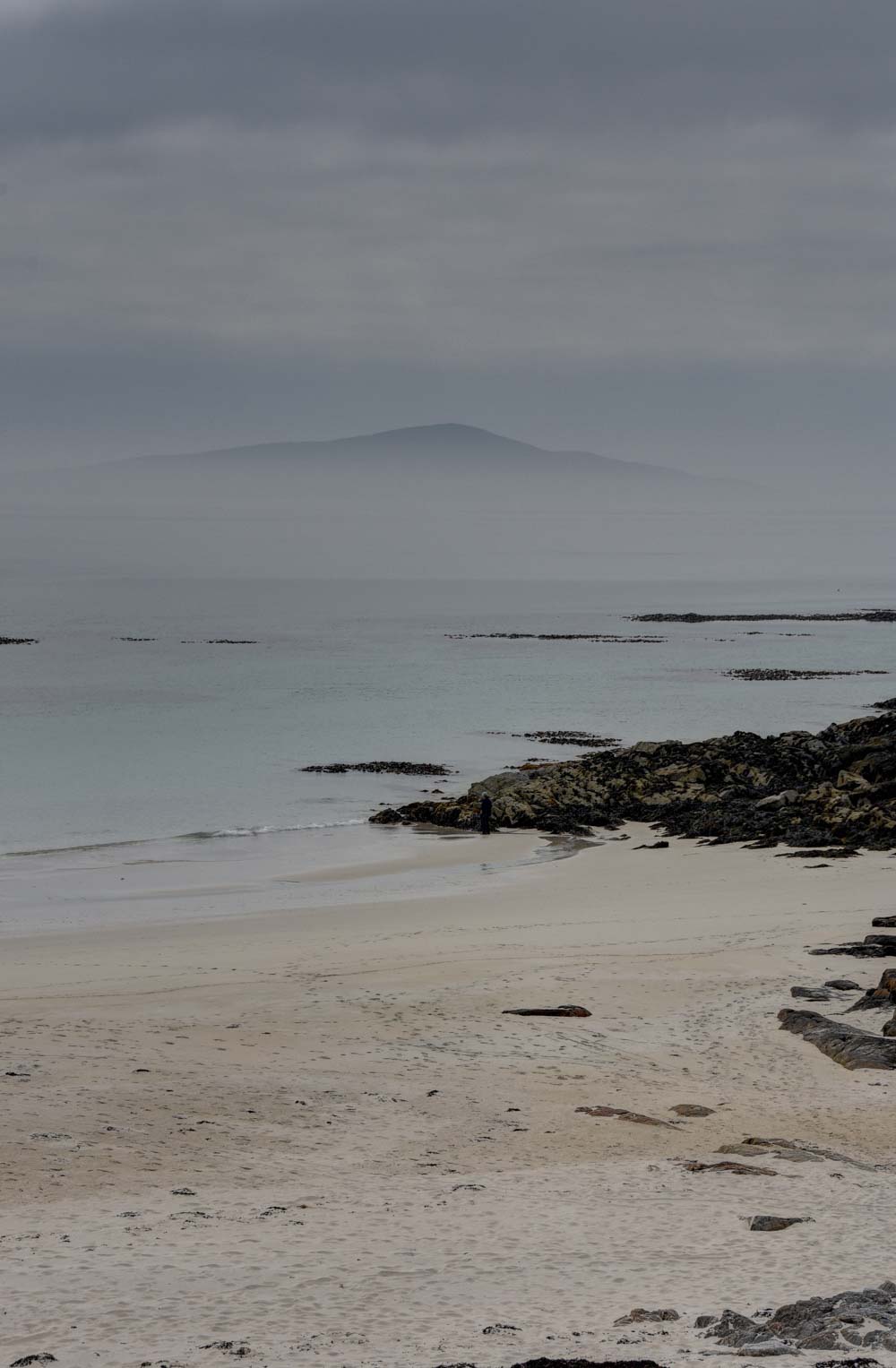 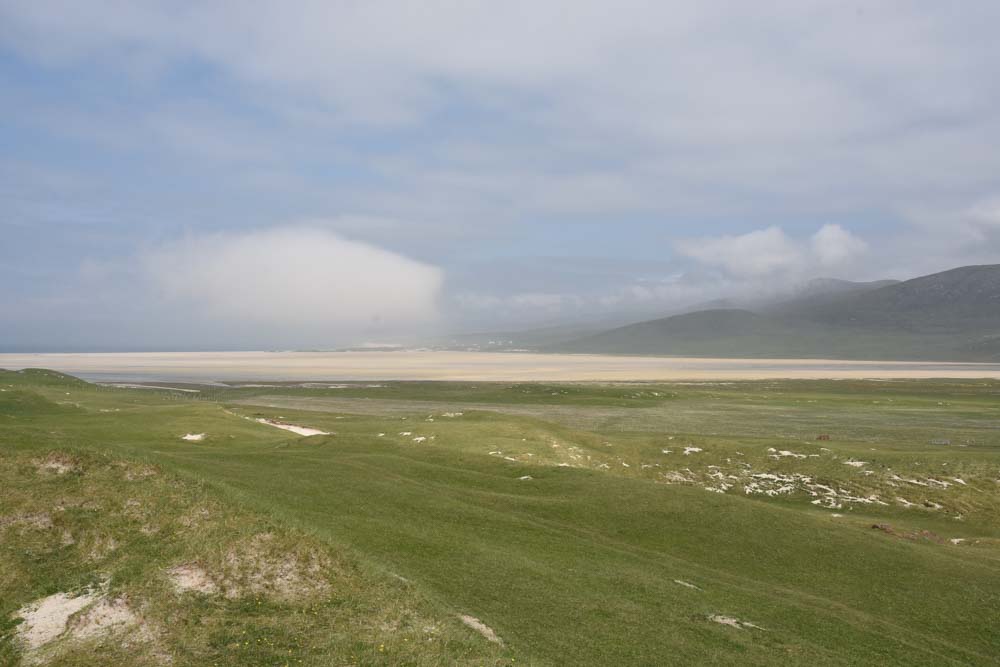 We’d identified a few pitch sites within a km or so of parking spots, but after a visit to the now open shop at Leverburgh it was apparent that it would be a nice evening so we drove back up to Huisinis with a plan.

By the time we arrived it was rather Caribbean. 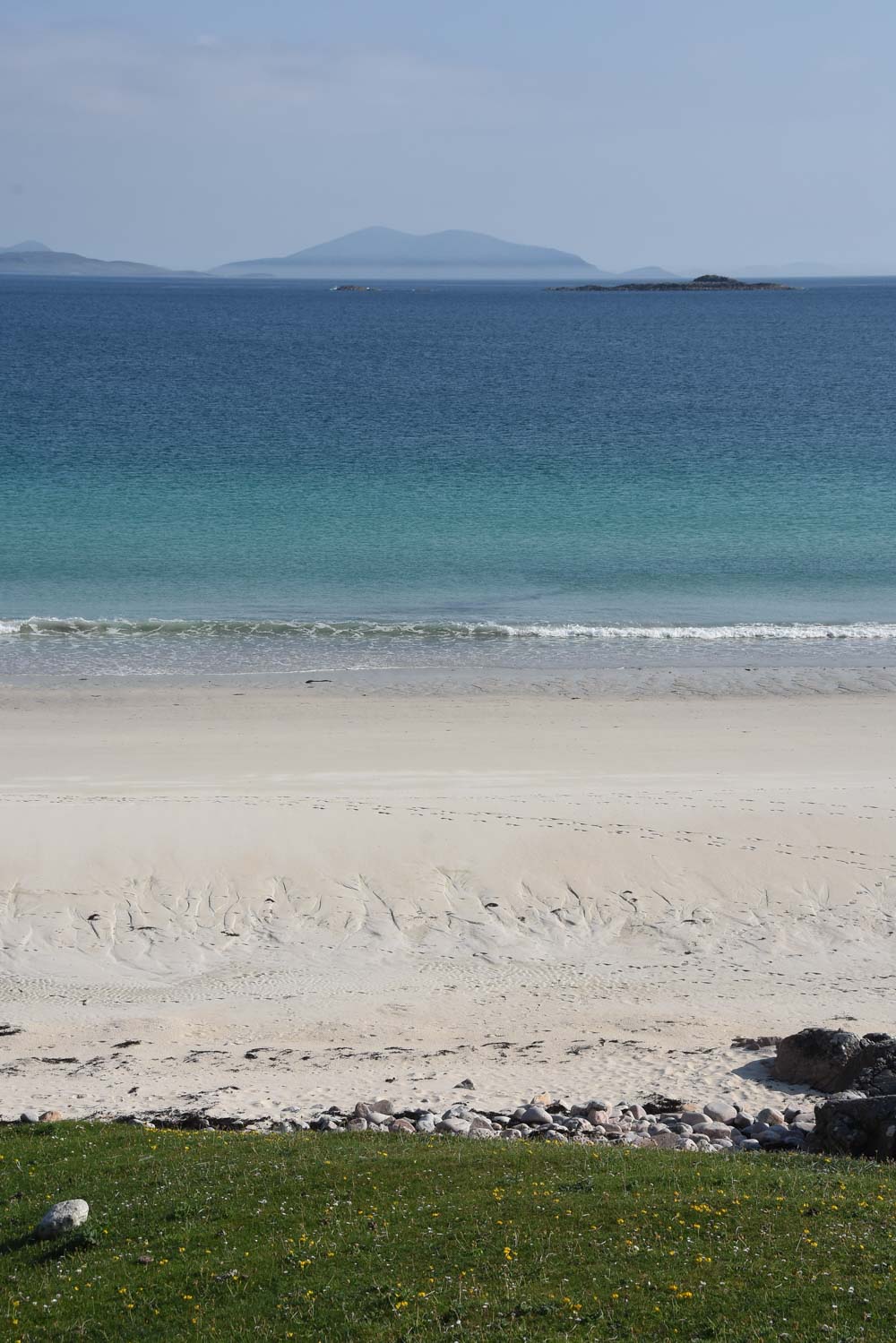 Packed up the camping packs and headed direct up the slopes of Huiseabhal Beag above Huisinis – our previous visit had demonstrated this to be a fine viewpoint and at only 300m an easy high pitch with a great view. 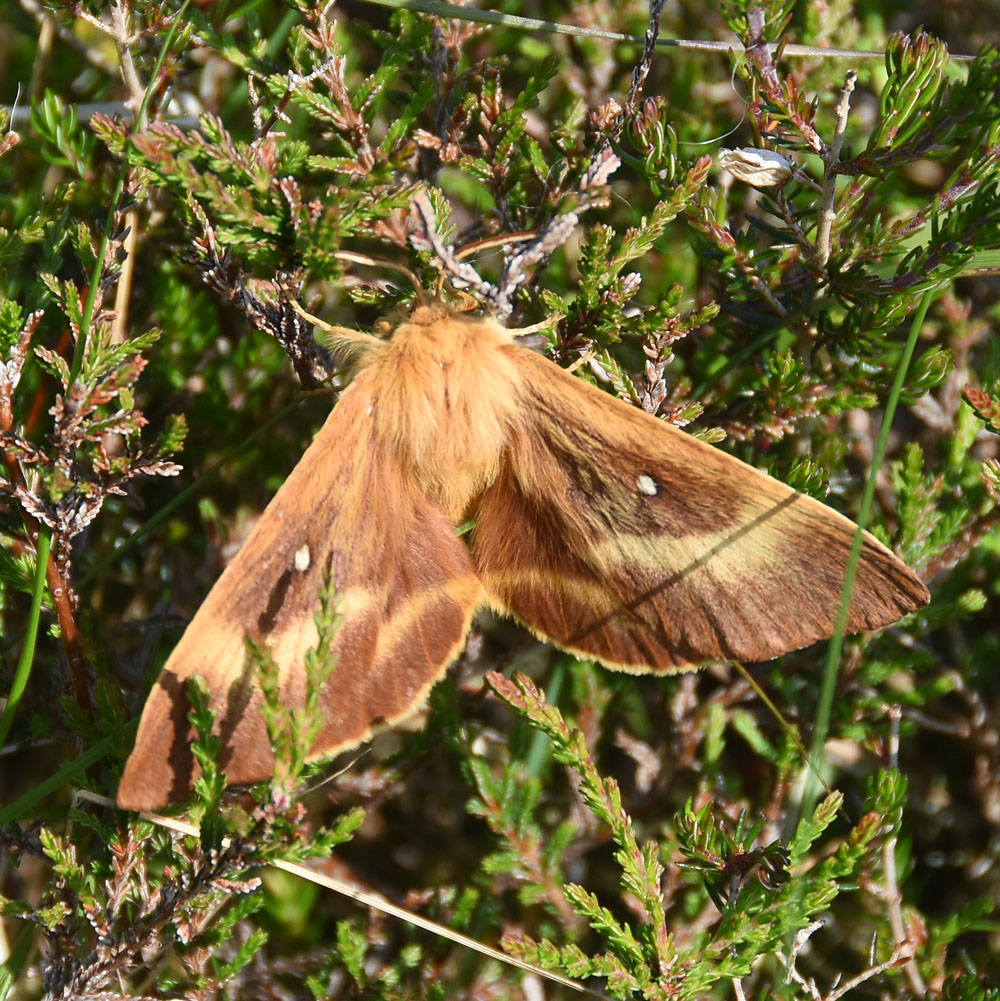 Heading up from Huisinis: 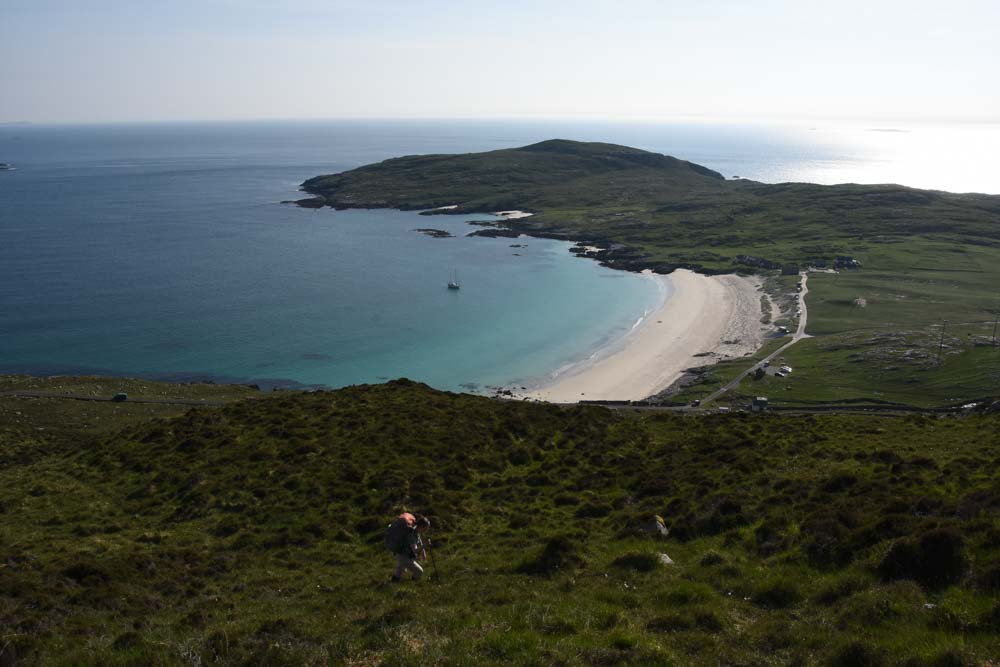 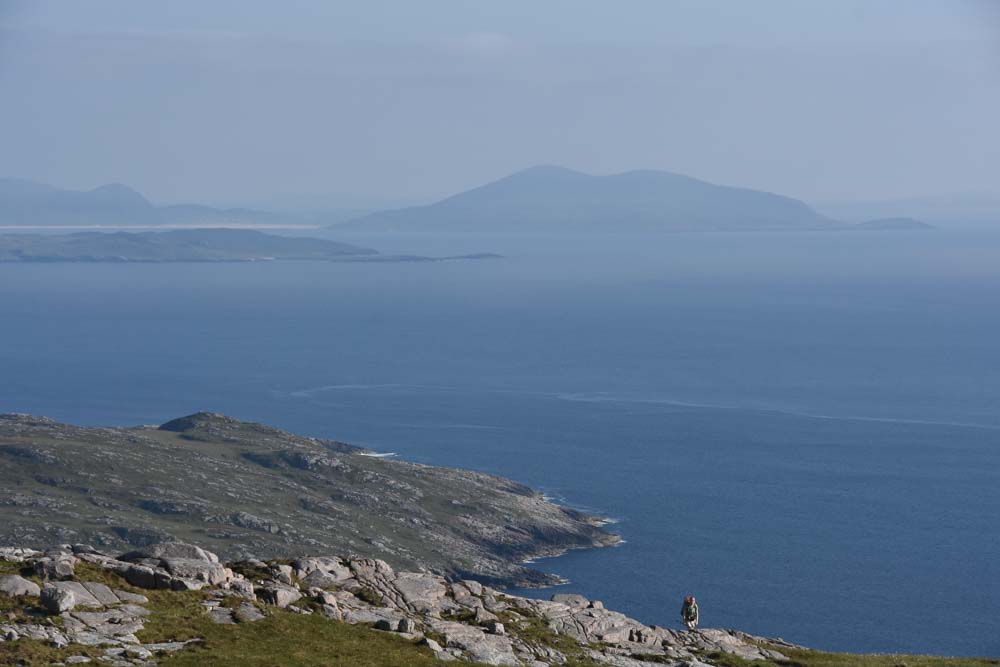 Didn’t take long to reach the summit. Quite a large summit area meant a bit of wandering to find a flat pitch with a good view. 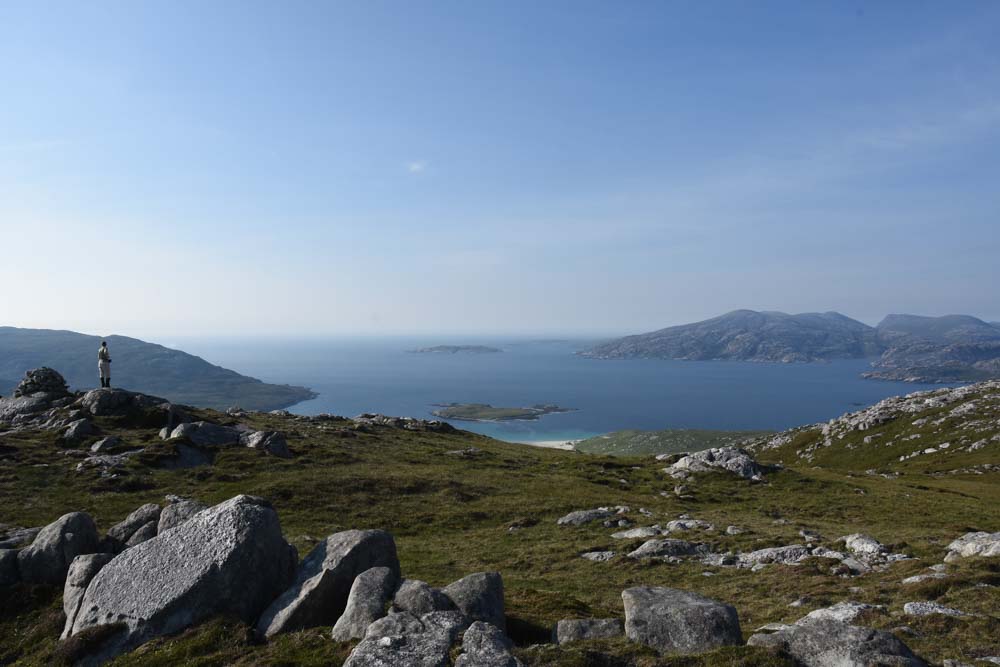 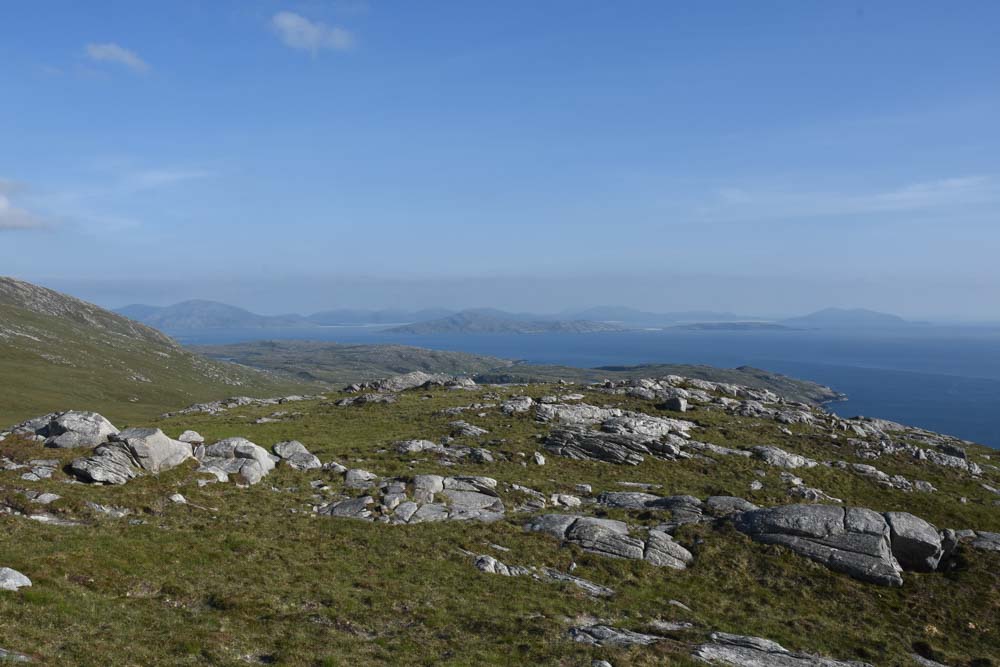 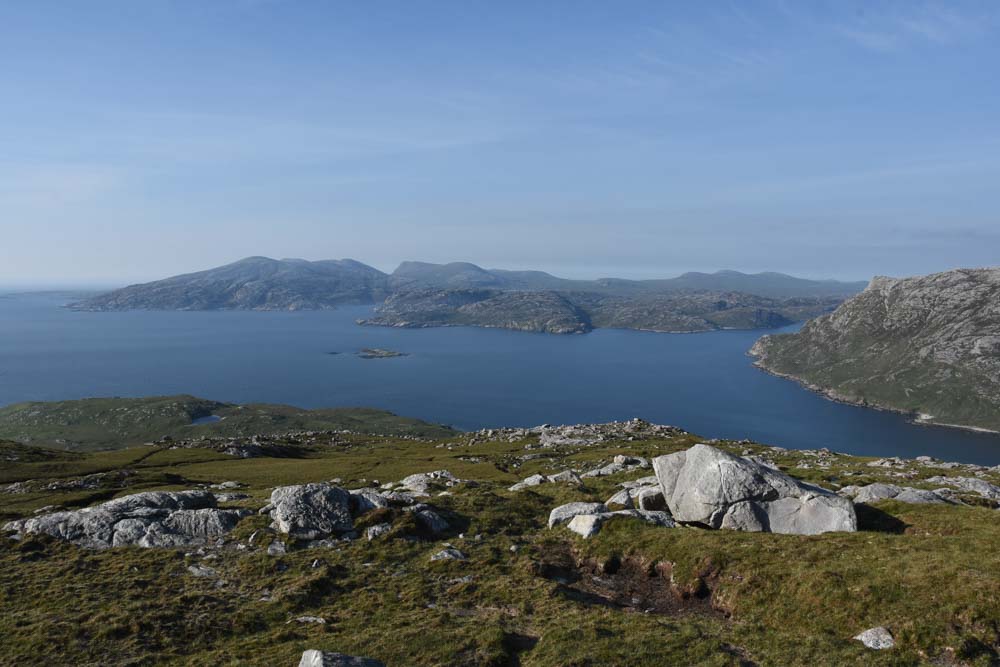 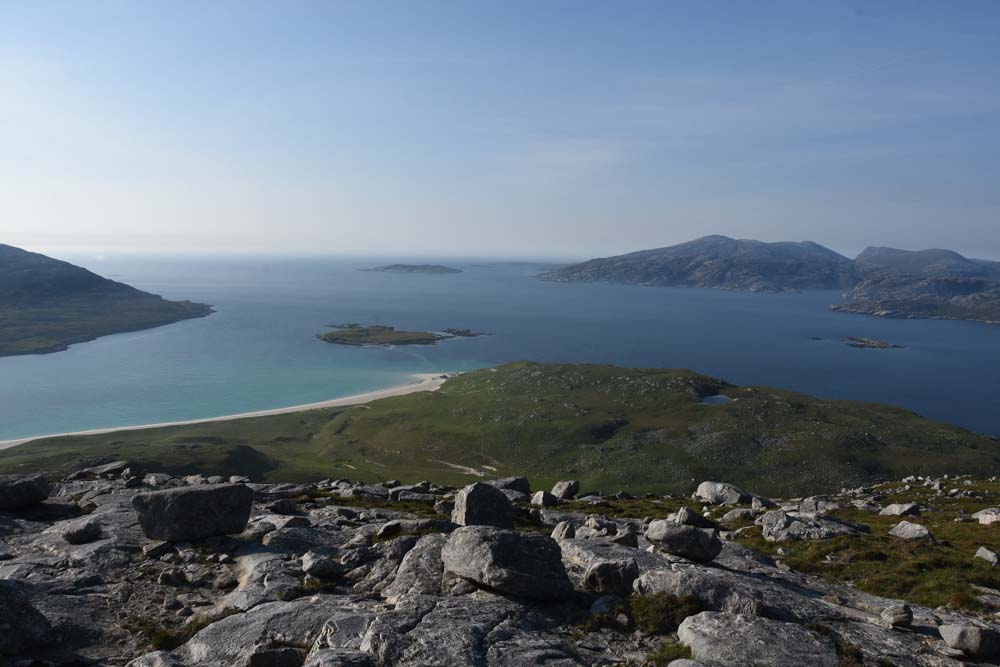 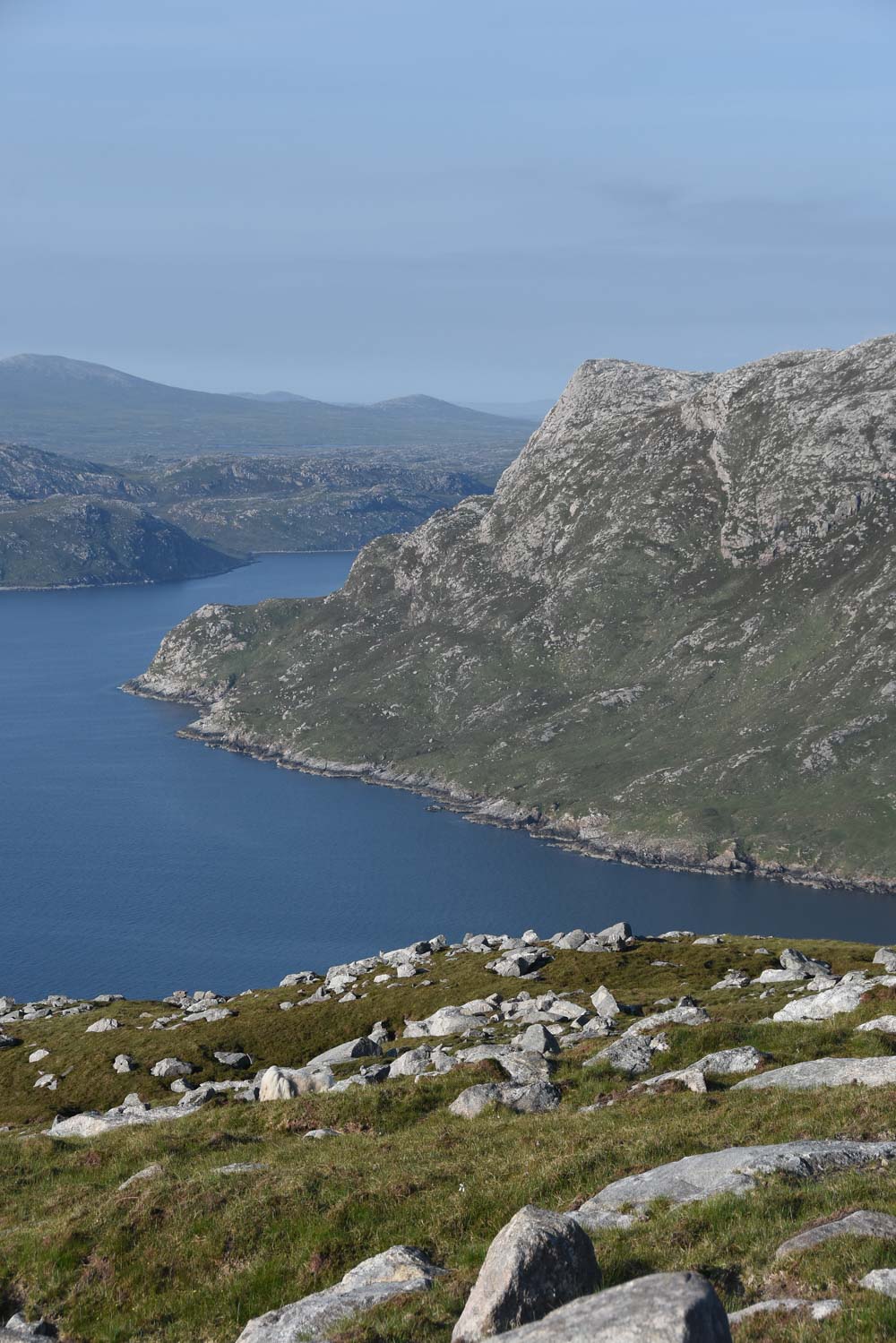 Settled on the north-east end of the summit with best views of Loch Crabhadail, the Uig hills, Taran Mor and Scarp.

We really like this bit of the islands where Lewis and Harris blend – truly splendid.

Scarp and Griomabhal on Lewis: 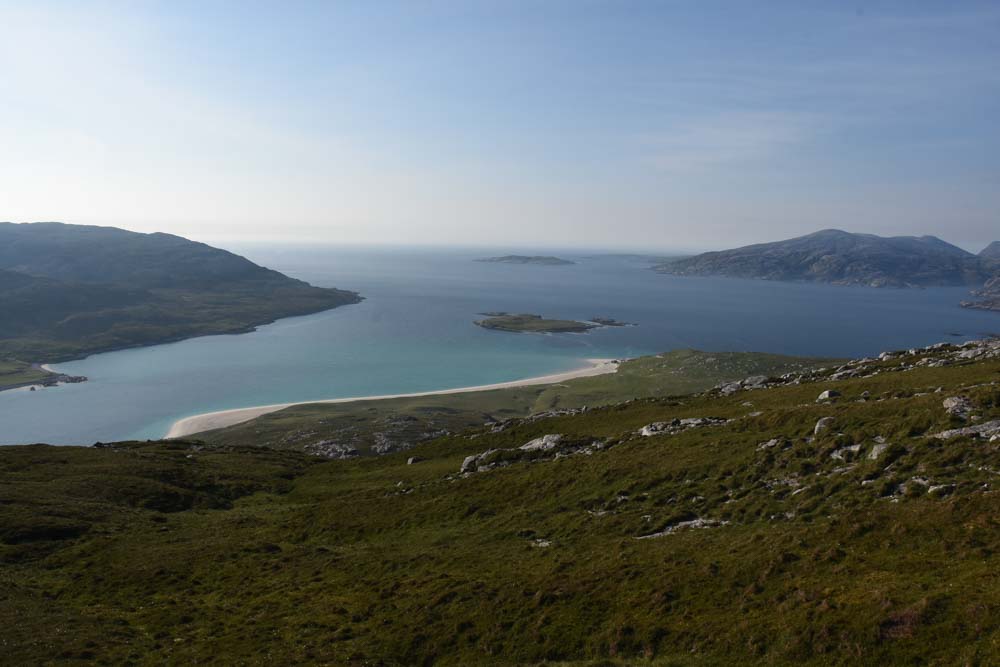 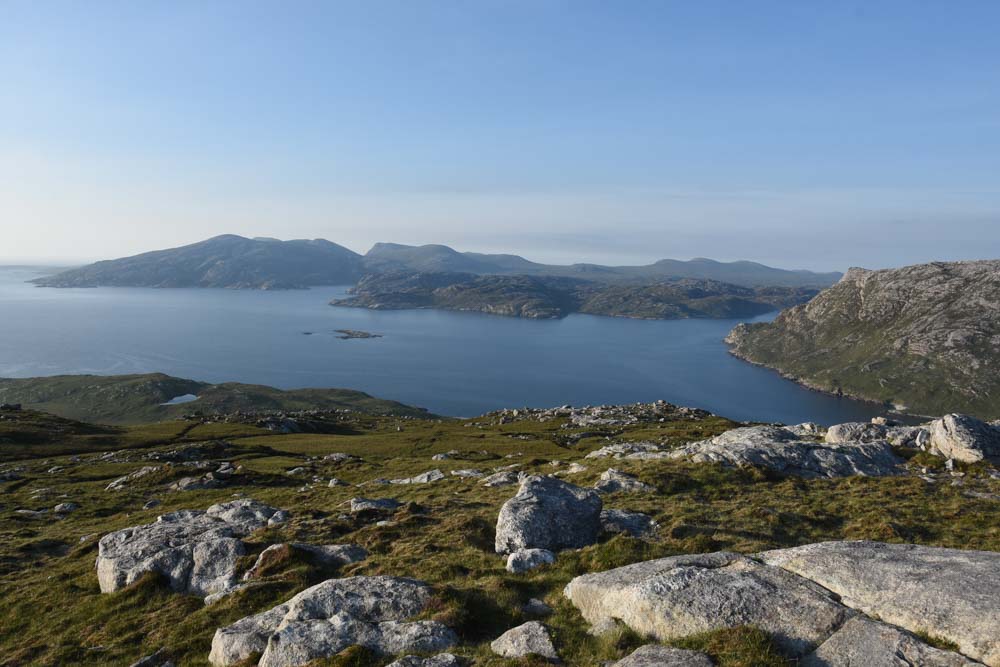 Settled in and cooked tea, a few ticks and quite a few midge also seemed to want to share the experience. Scarcely detracted though.

Ate tea and watched the sun lower towards the Atlantic.

The Scarp on Huiseabhal Beag: 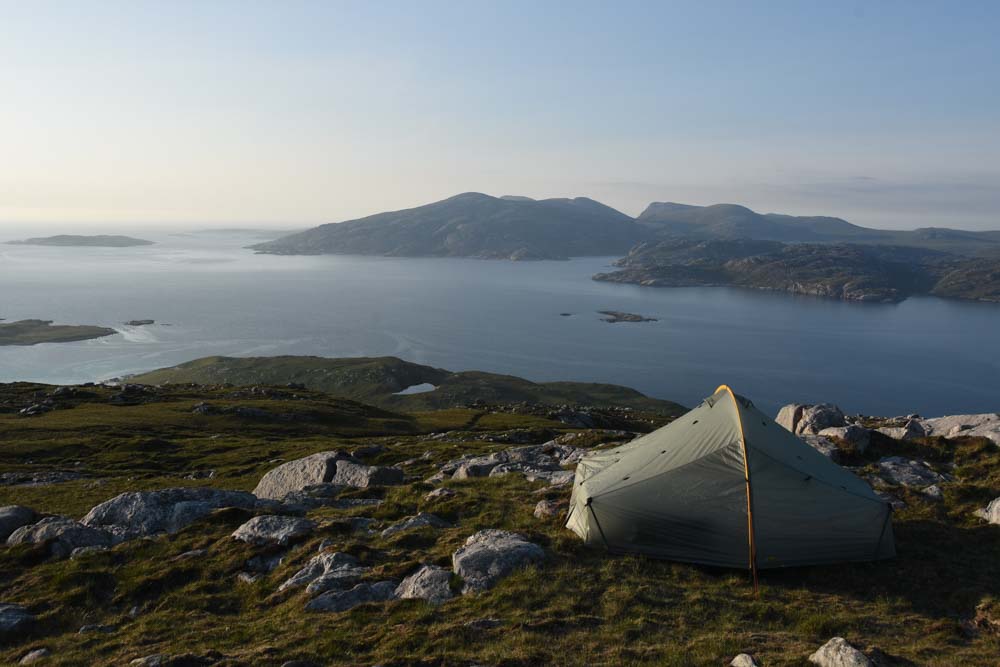 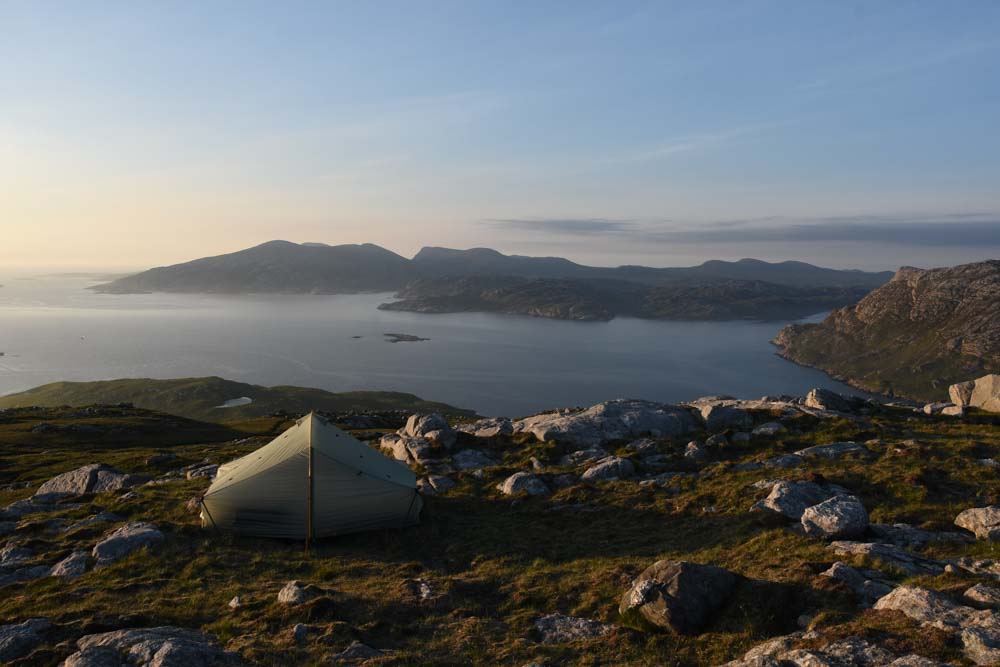 We could see our pitch from the night before catching the evening sun.

Back to Luskentyre and last night’s pitch: 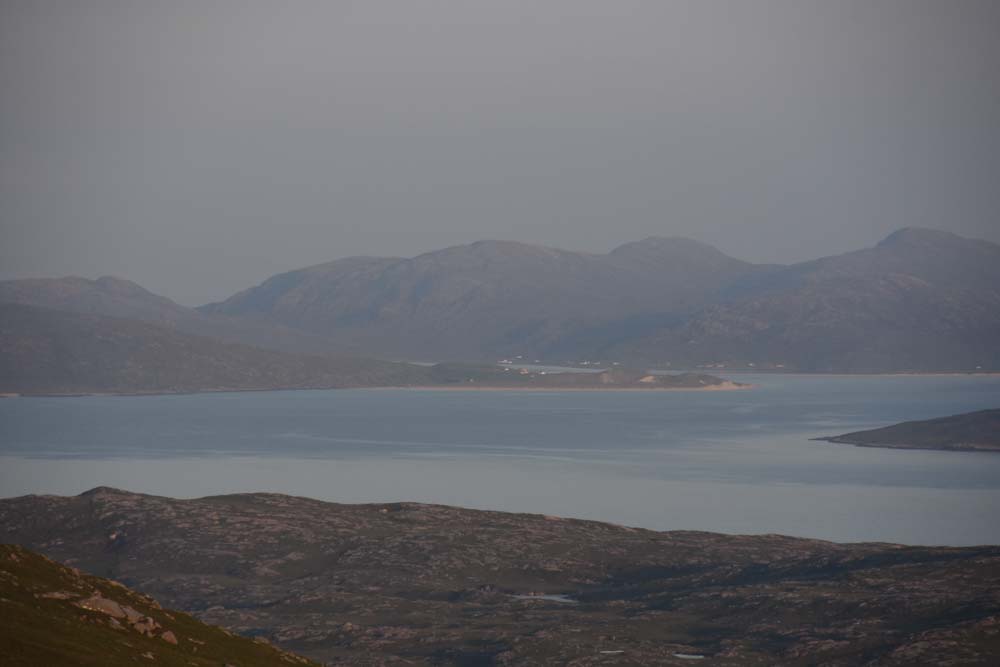 Out south and west a few islands were visible. 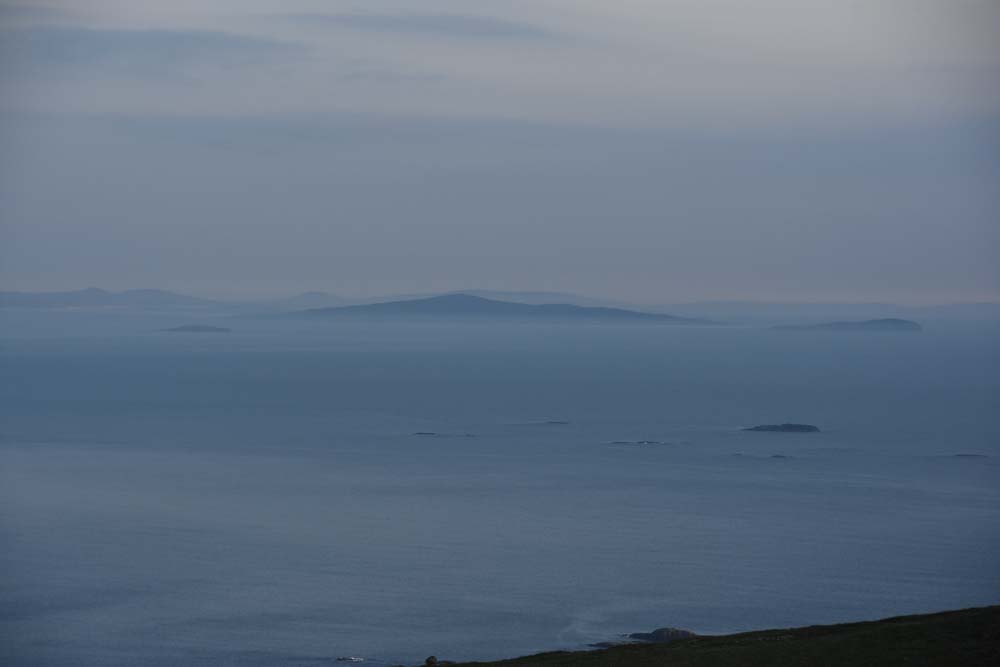 I took a picture of another group – must confess that with the haze I hadn’t even thought about St Kilda until I checked the map and direction – rather surprised that they were visible at all. 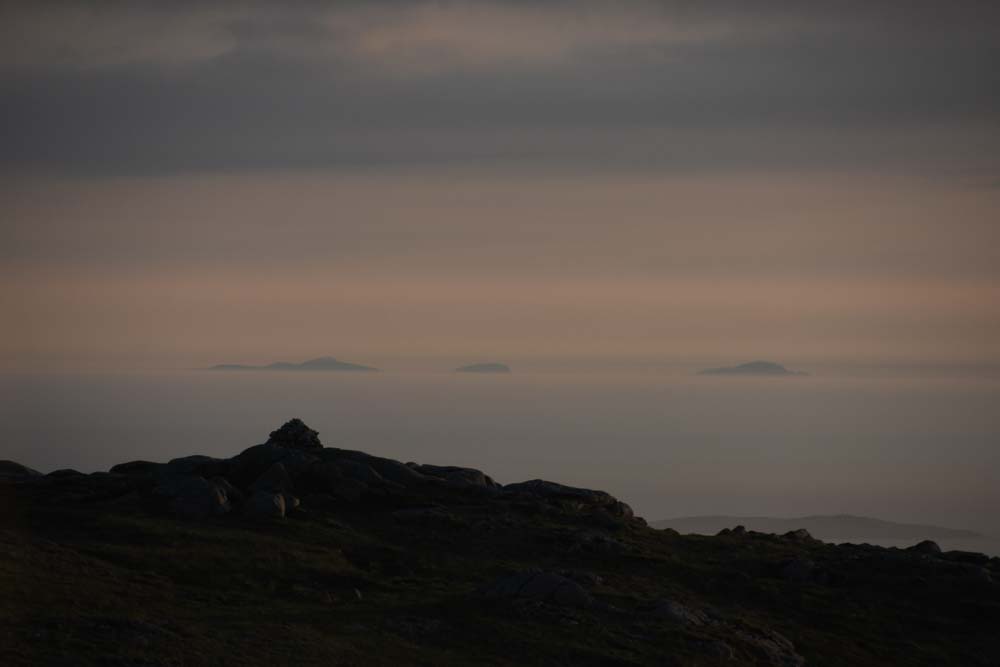 The shore of Loch Crabhadail: 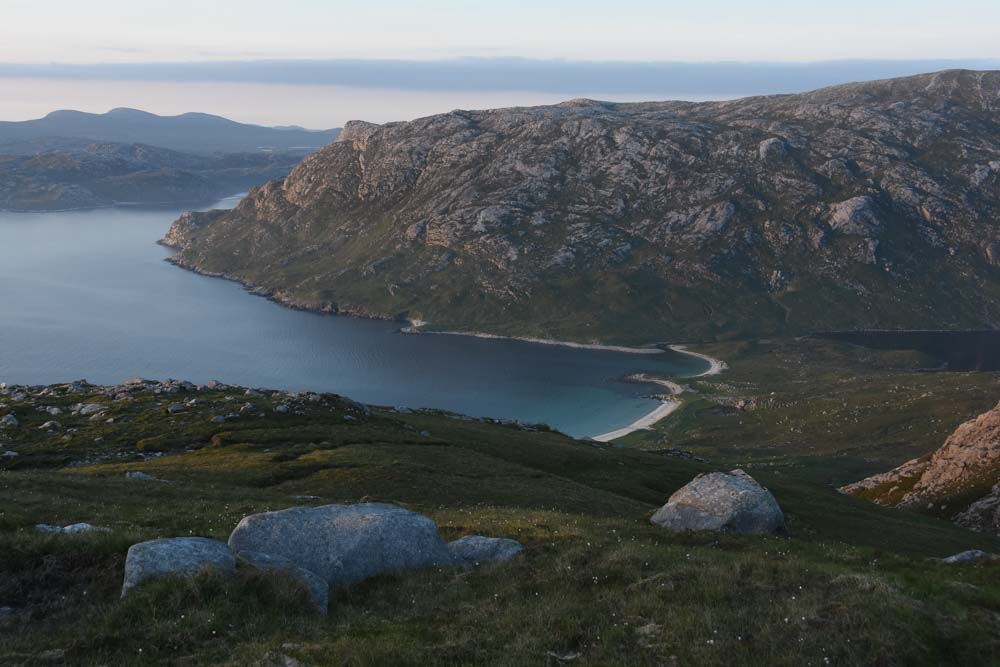 ….someone else had the same idea, bivvying on the shore.

Bivvier down on the shore: 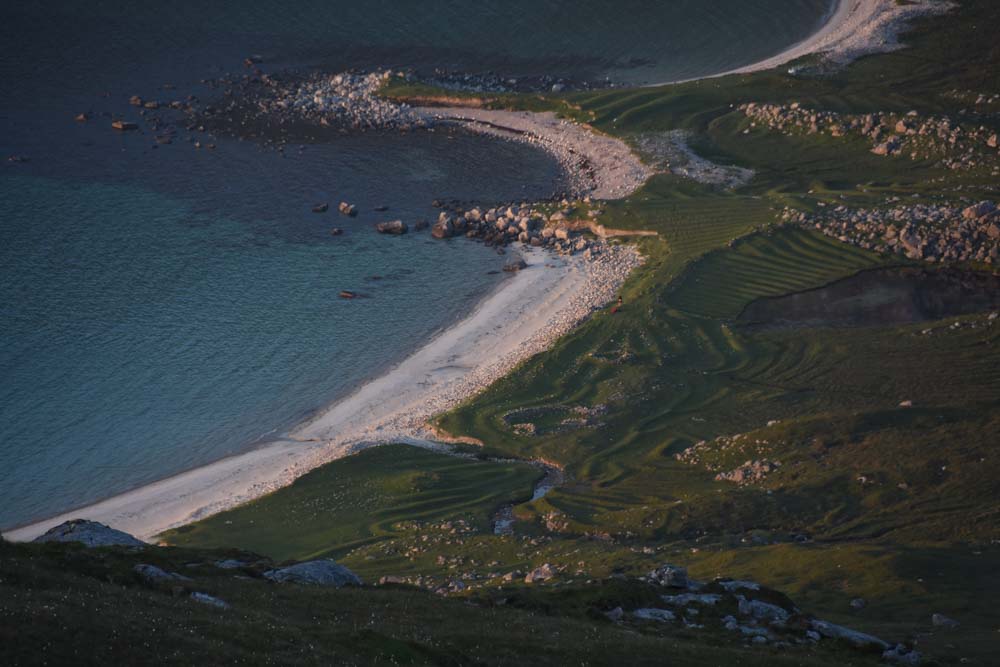 Wandered around til the sun went down before getting our heads down to sleep….a good forecast meant we’d need to choose which of several plans was on in the morning. 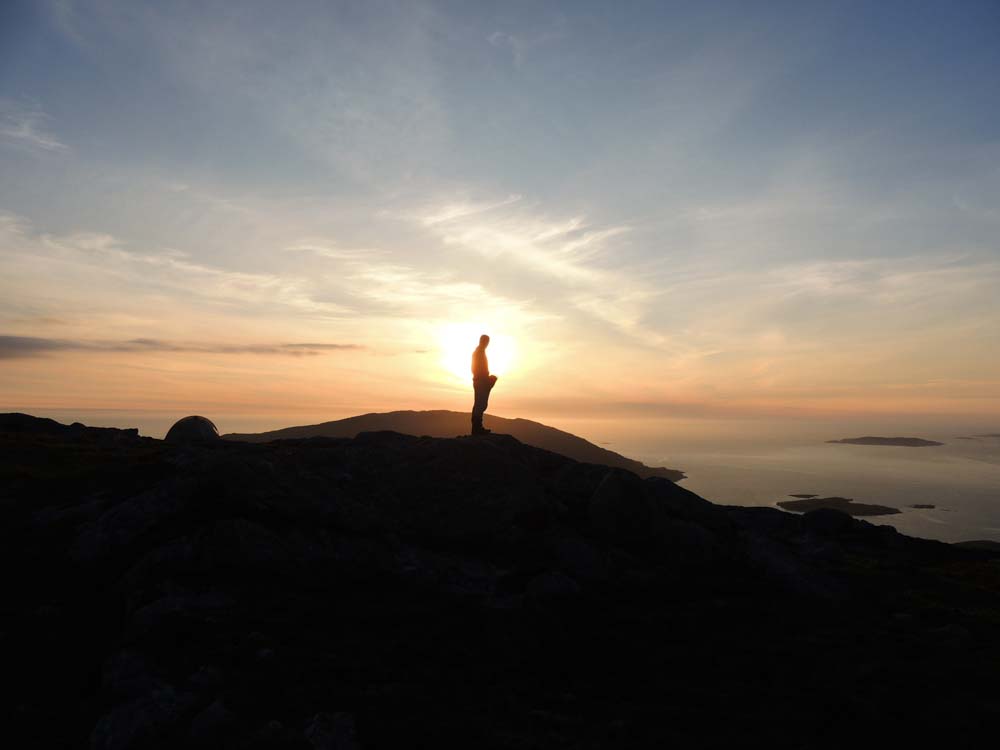