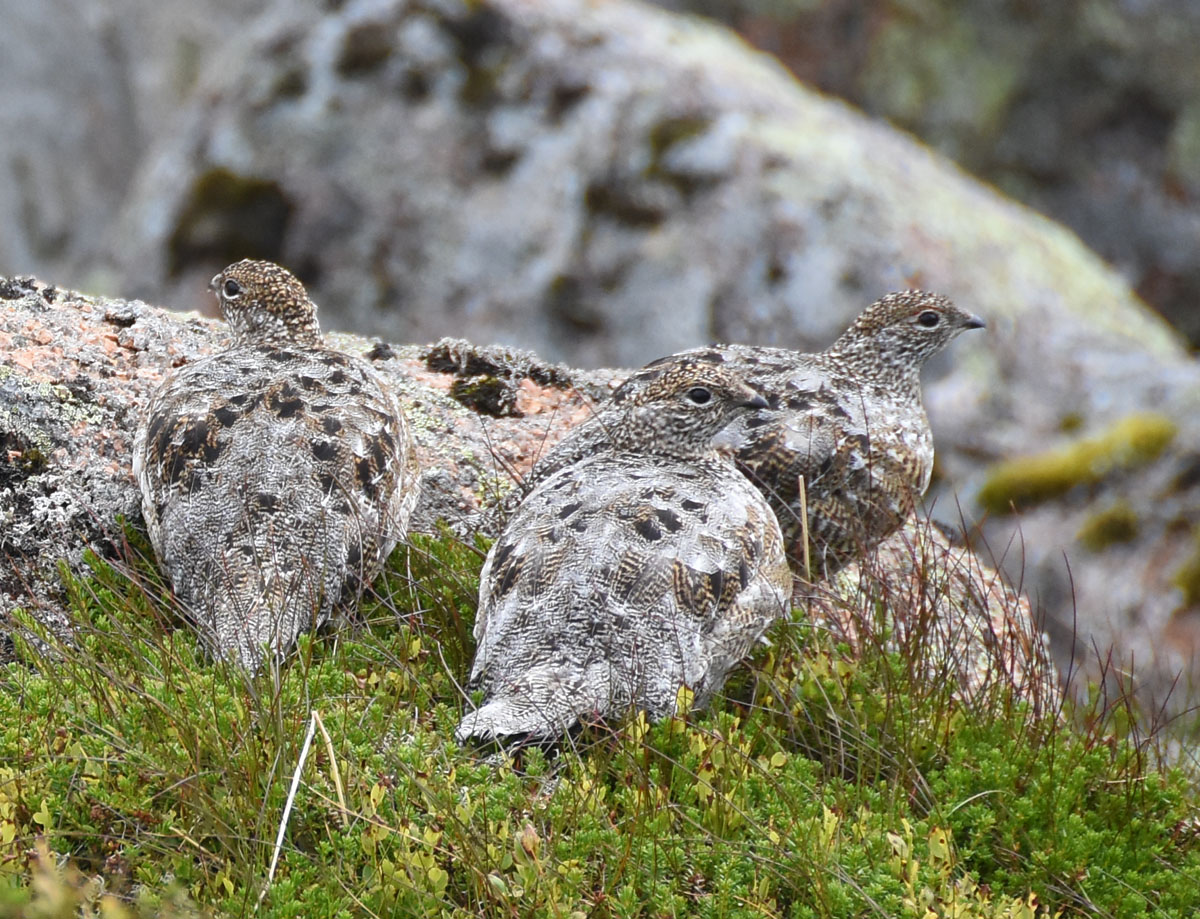 Up in Aviemore at the weekend – only Saturday to spare due to various commitments. A breezy and mixed day forecast, it looked as though the eastern Cairngorms had the best chance of passable weather.

Been 8 years since our last visit to Bynack or Creag Mhor so off we set.

Decided to try the Forestry Commission car park 1km south of Glenmore (marked for Ryvoan Pass). Not knowing which way the track headed out we picked a little path and added 1.5km to the day following this to a dead end at the river. The real track is at the south end of the car park loop and way marked.

A quick yomp out to Ryvoan with some sun emerging. 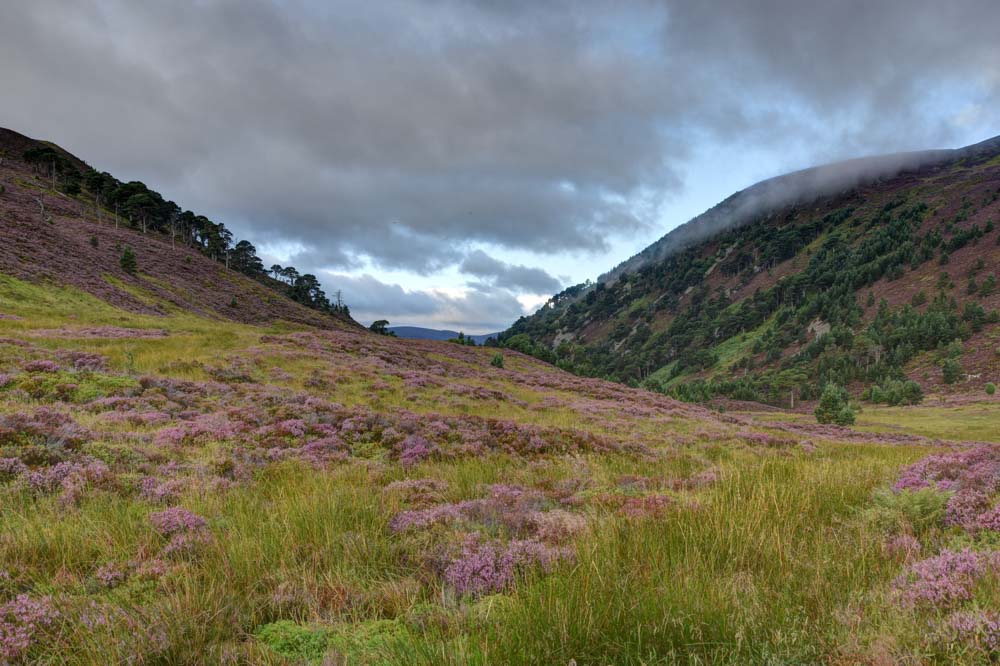 There were blue skies south and east of us and the sun occasionally lit up our surrounds. Quite a contrast with the brooding dark to the west. 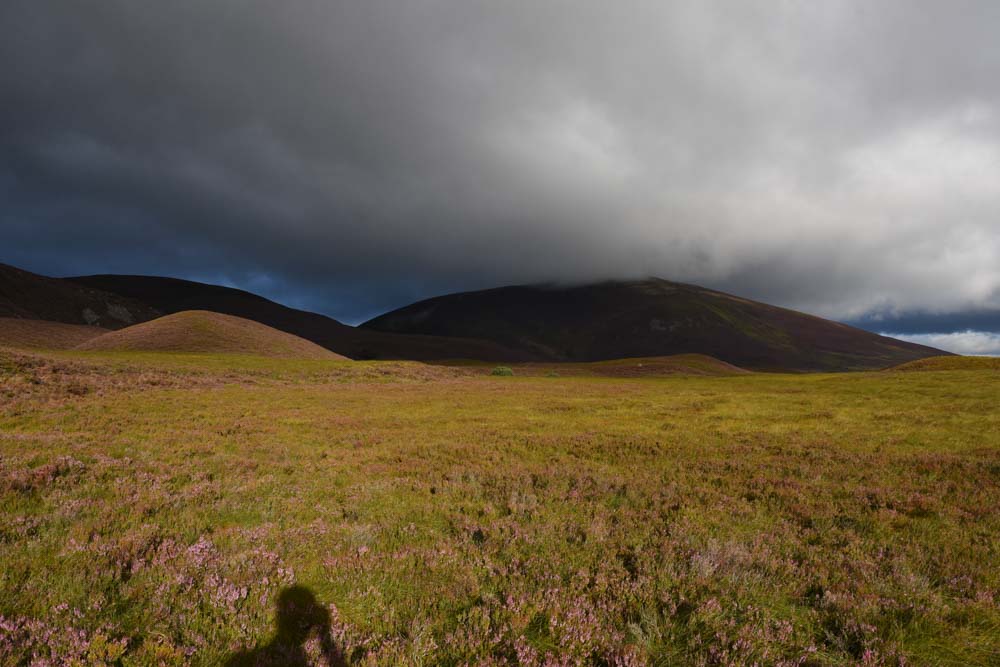 The path/track out to (and up) Bynack is much better quality than 8 years ago. Easy walking.

Back to Meall a Buachaille: 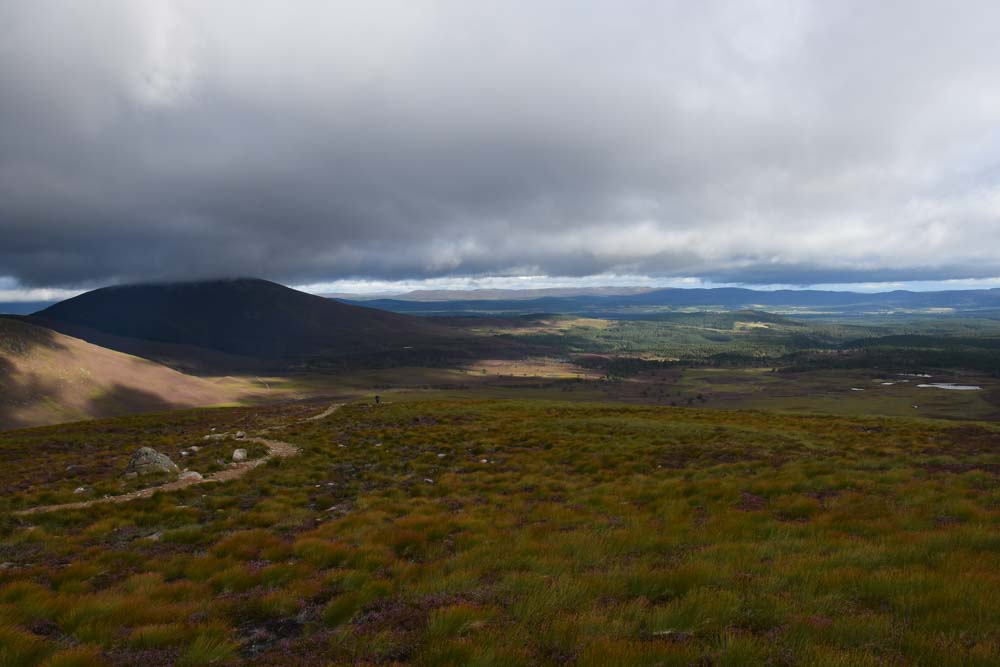 Across to Stac na h-Iolaire: 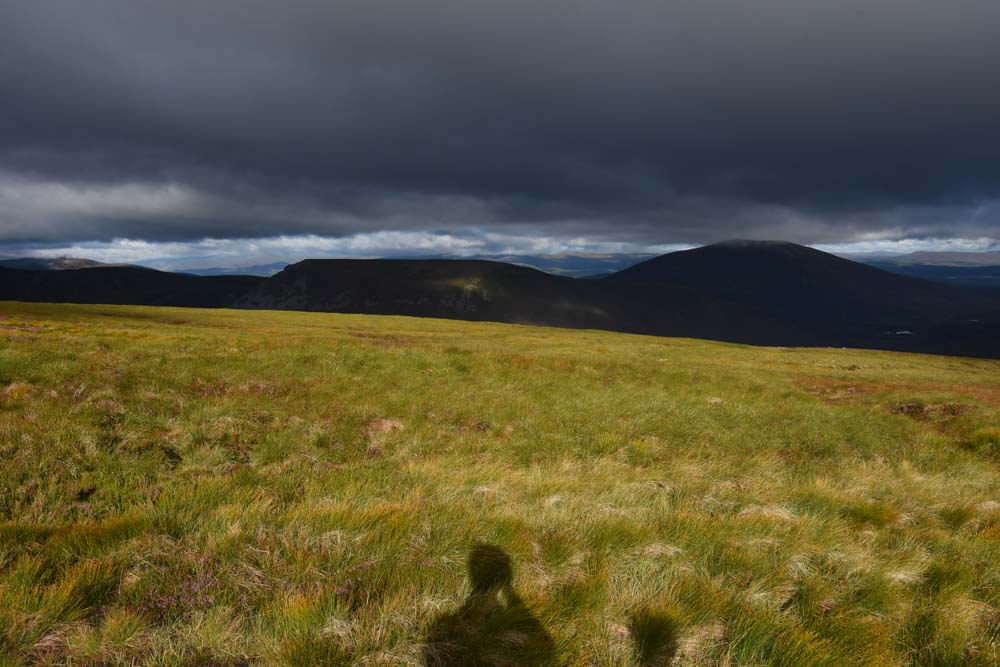 Across the plateau to the north of Bynack the munro was sunlit. We’d planned on looping Creag Mhor to Bynack given a forecast for an improving day, but with the munro in sunshine we thought we’d get up this first before the crowds arrived. 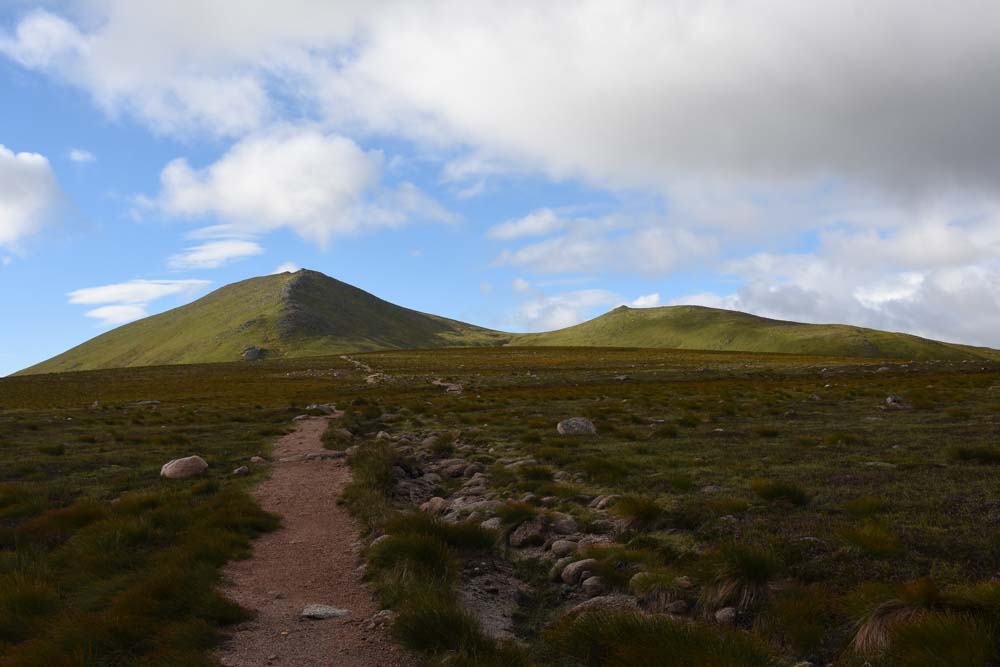 Ben Avon and Beinn a Bhuird looked like they were getting a great morning.

Ben Avon and Stob an t-Sluichd: 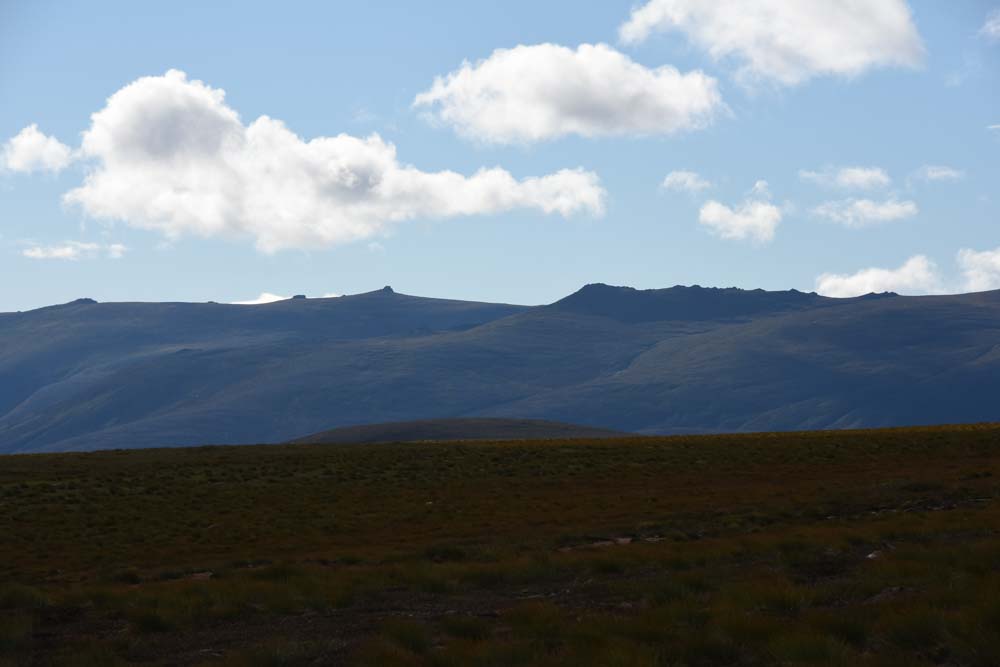 Some of the reindeer were grazing on the Strath Nethy side of the hill. 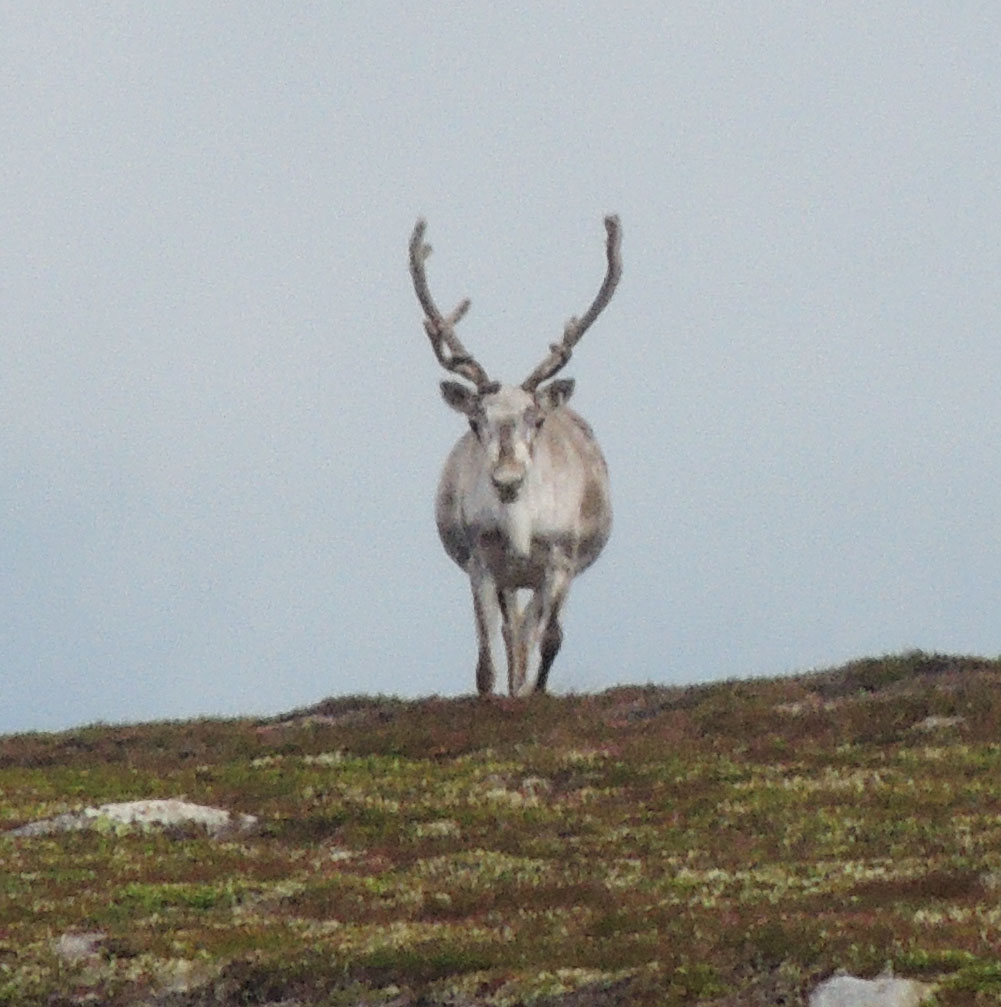 Heading up Bynack we spotted a ptarmigan family – 4 juveniles and 1 adult female I think. They froze in place as we past, the hen calling for the juveniles to stay as she kept an eye on a kestrel hunting a little way away. 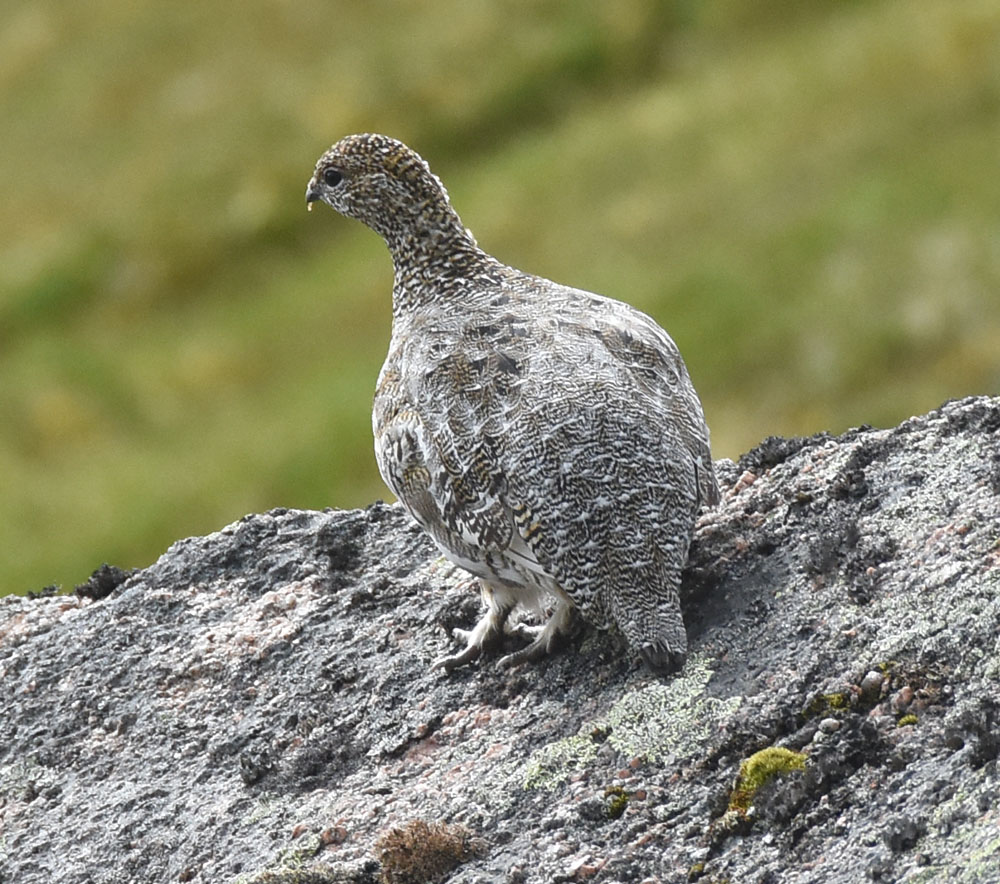 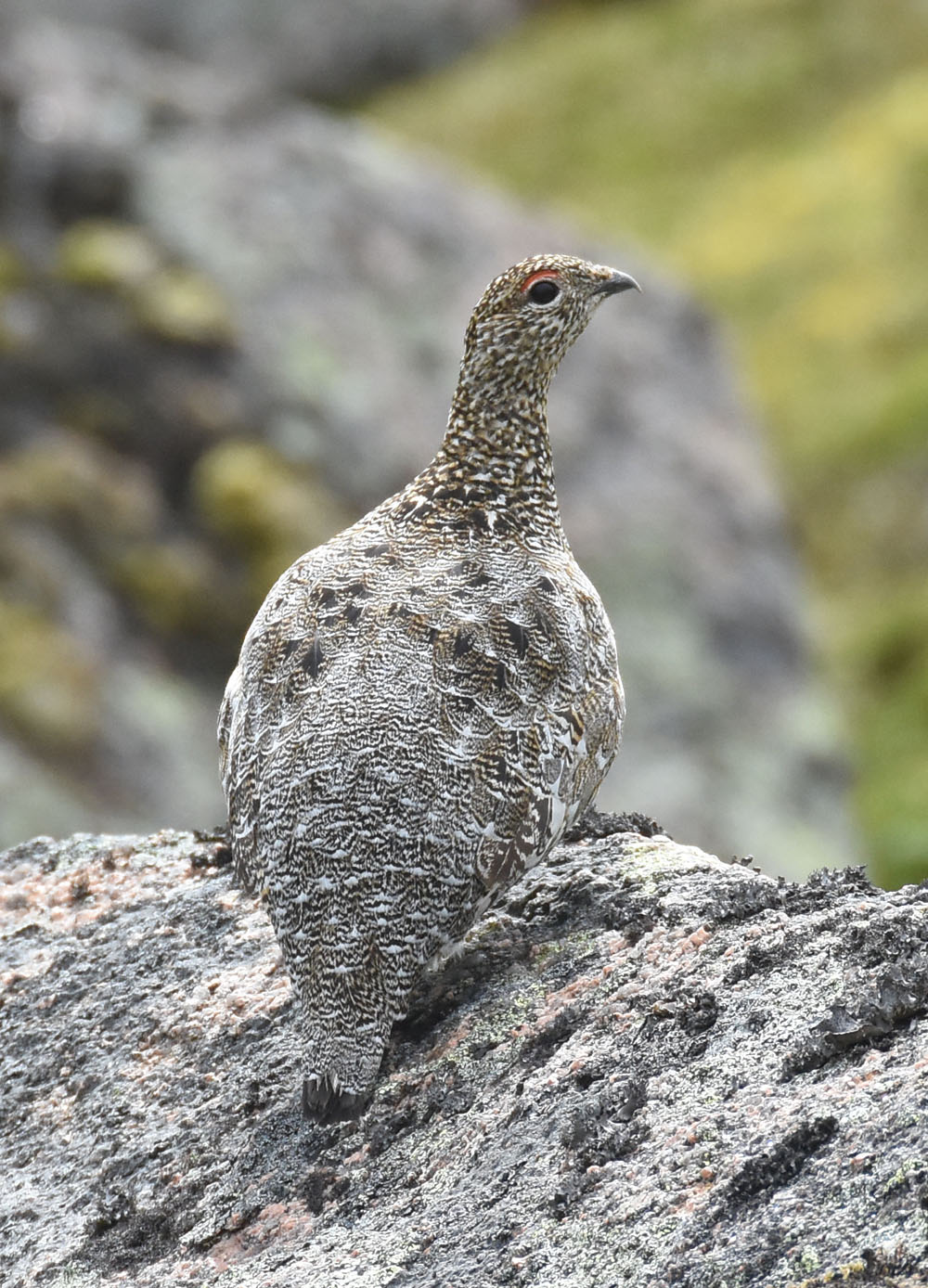 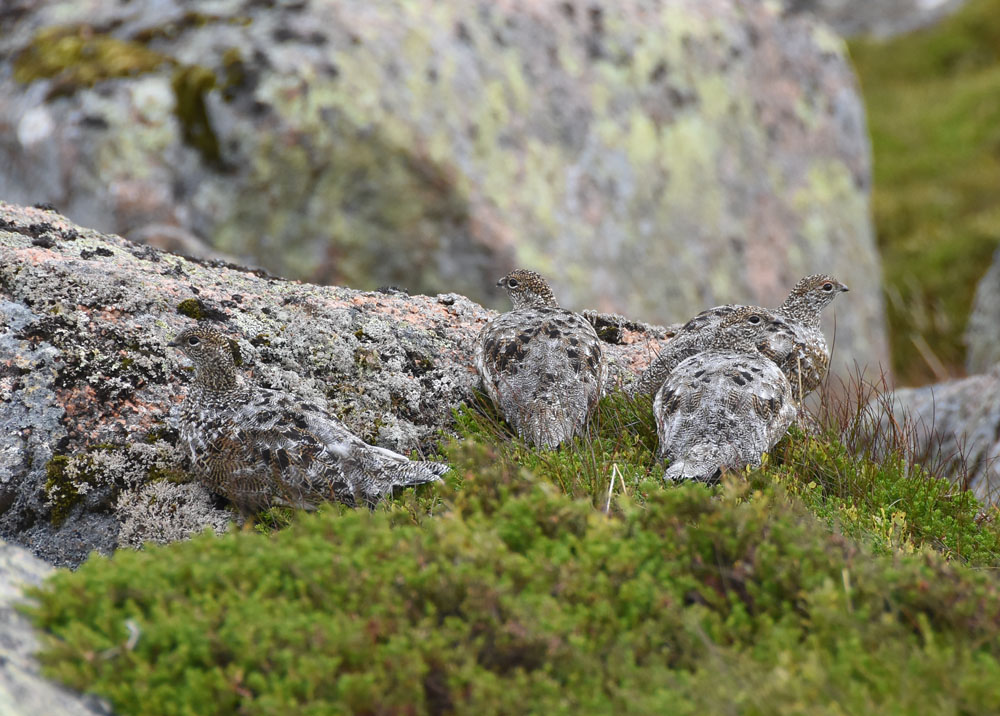 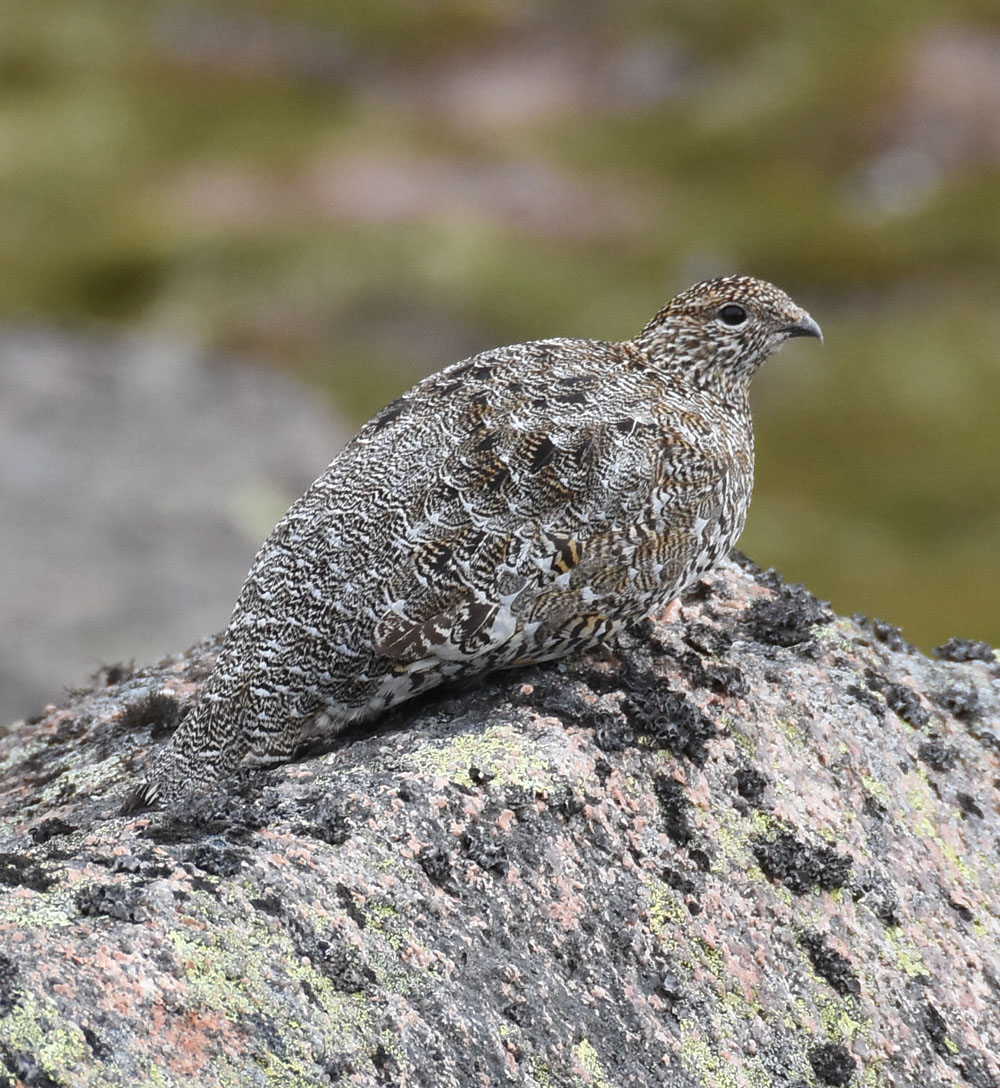 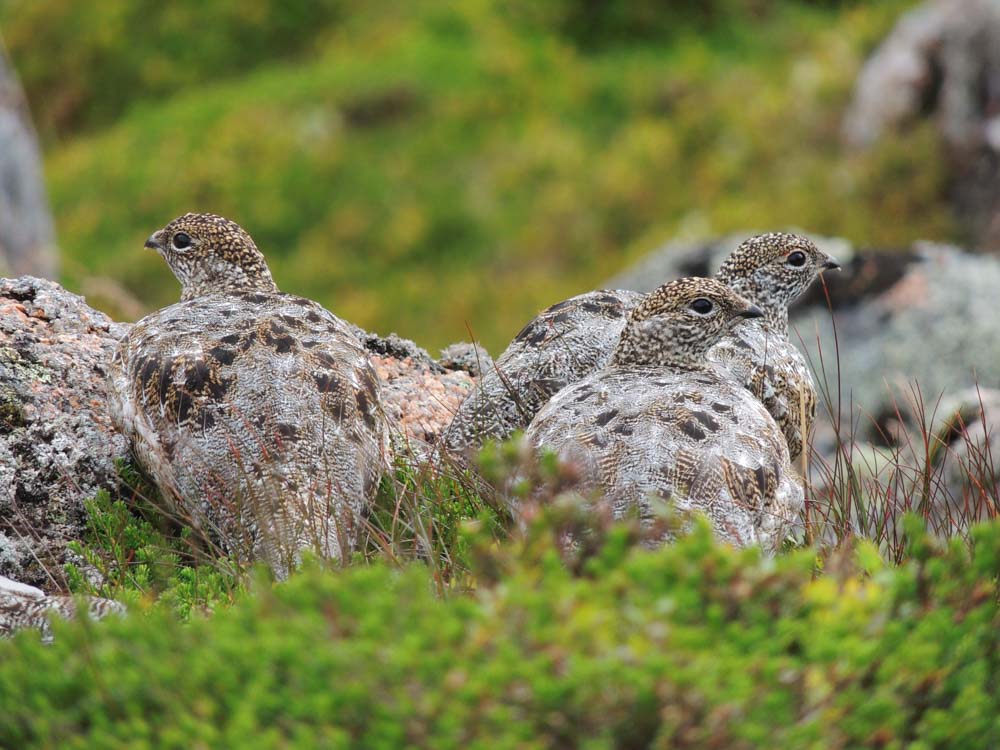 Up to the top of Bynack we sat for nearly an hour in intermittent sunshine with the summit to ourselves.

The main plateau was stolidly cloud-capped. 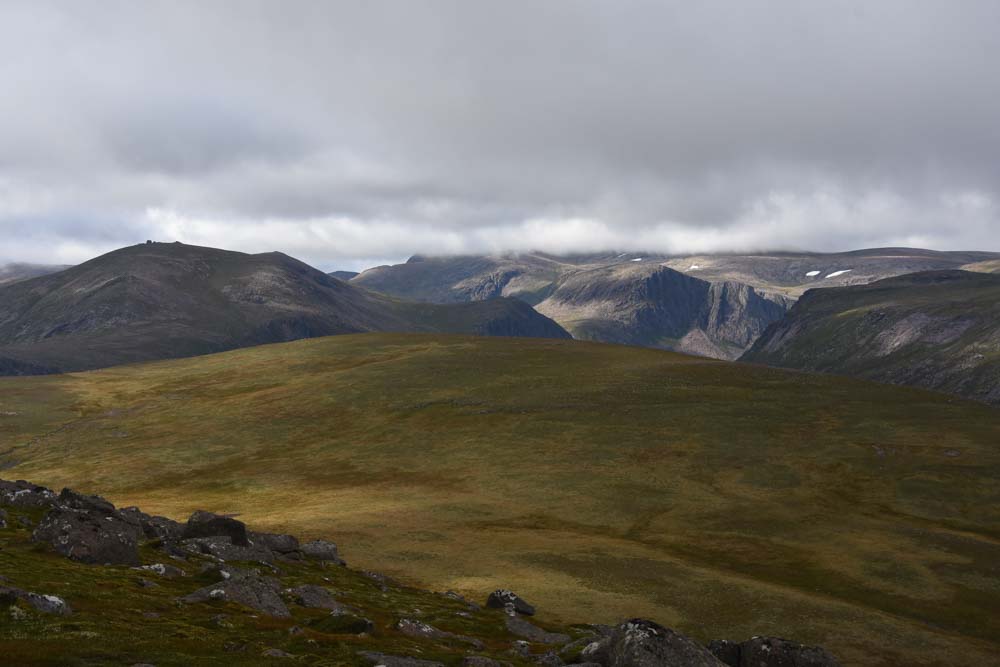 We noticed fairly brisk looking showers heading in and decided to move on. 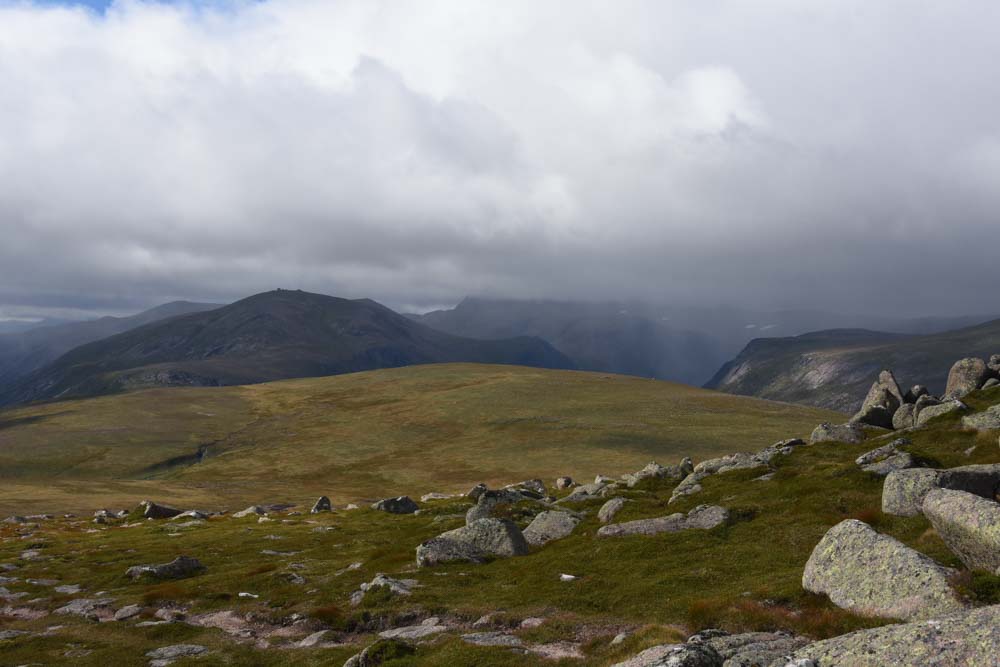 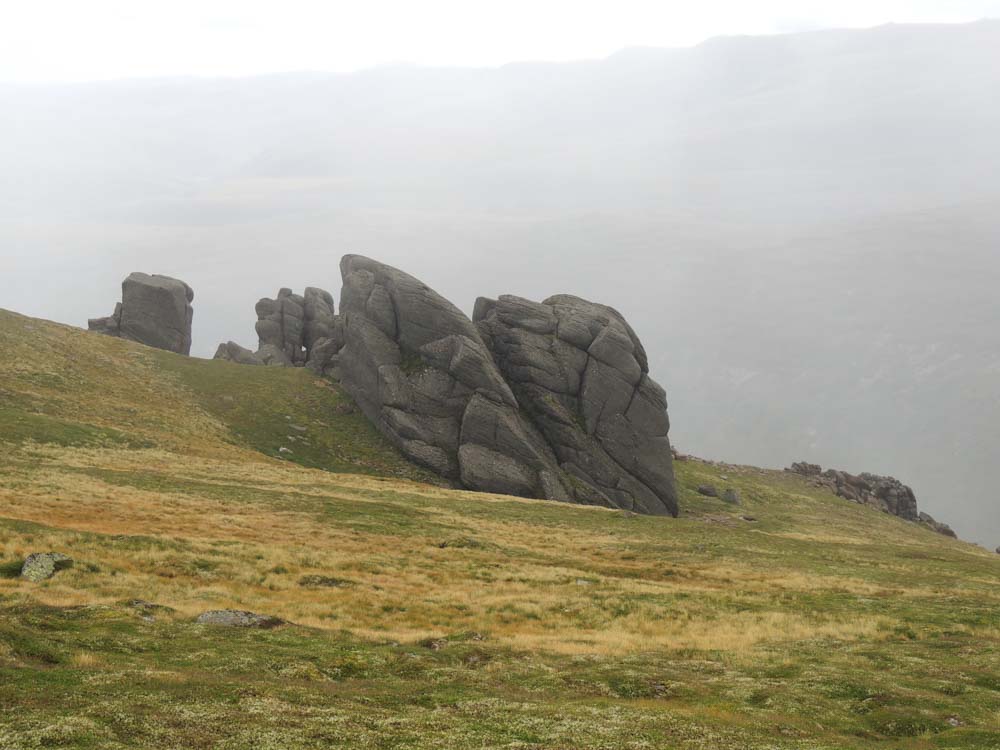 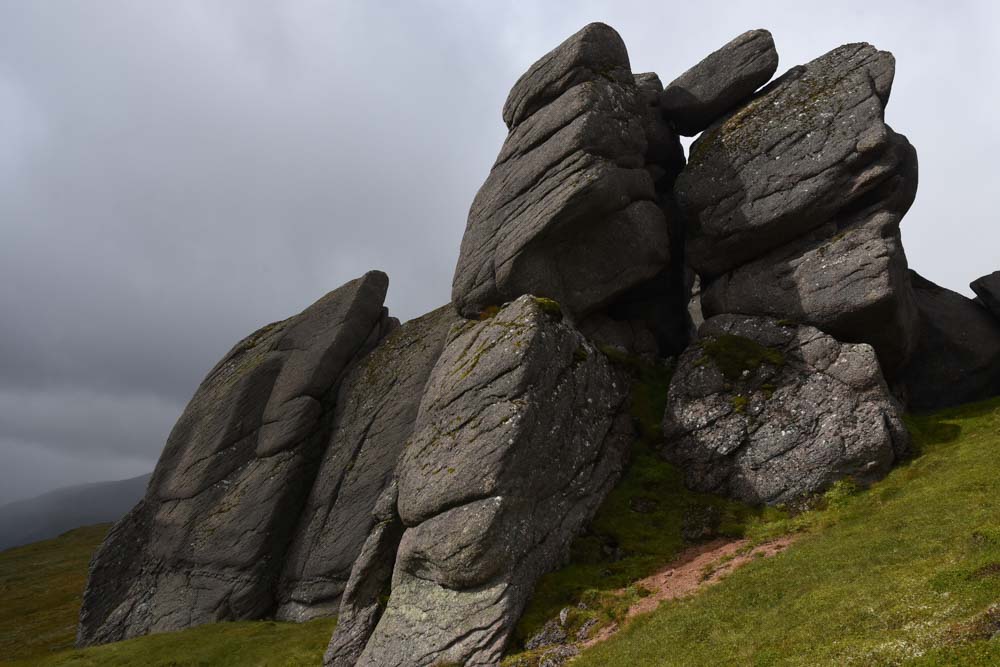 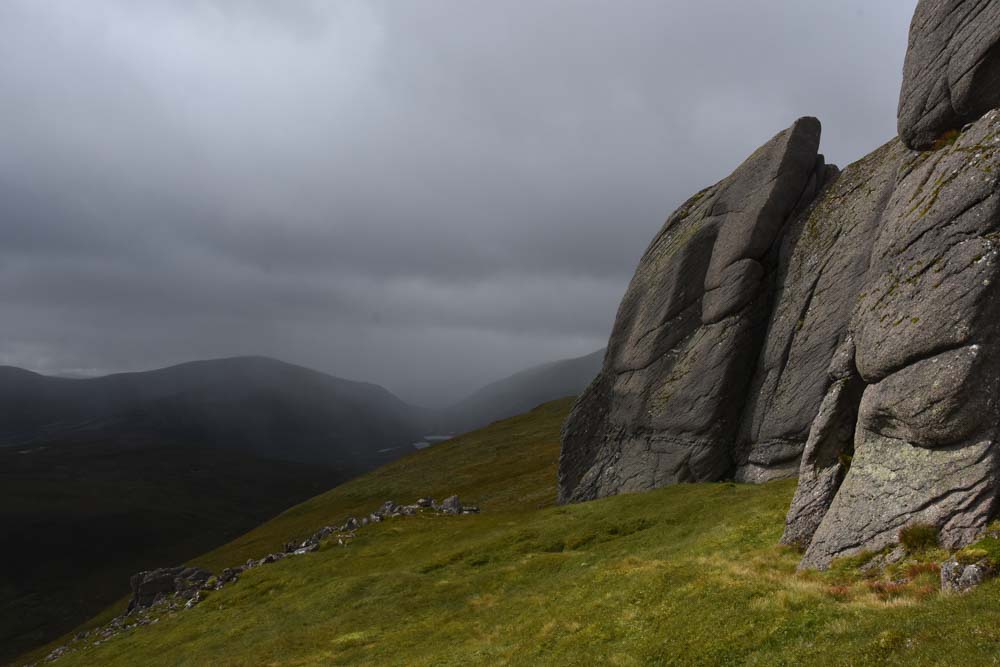 From here dropped steeply down heathery slopes to the Corrie of the Barns. 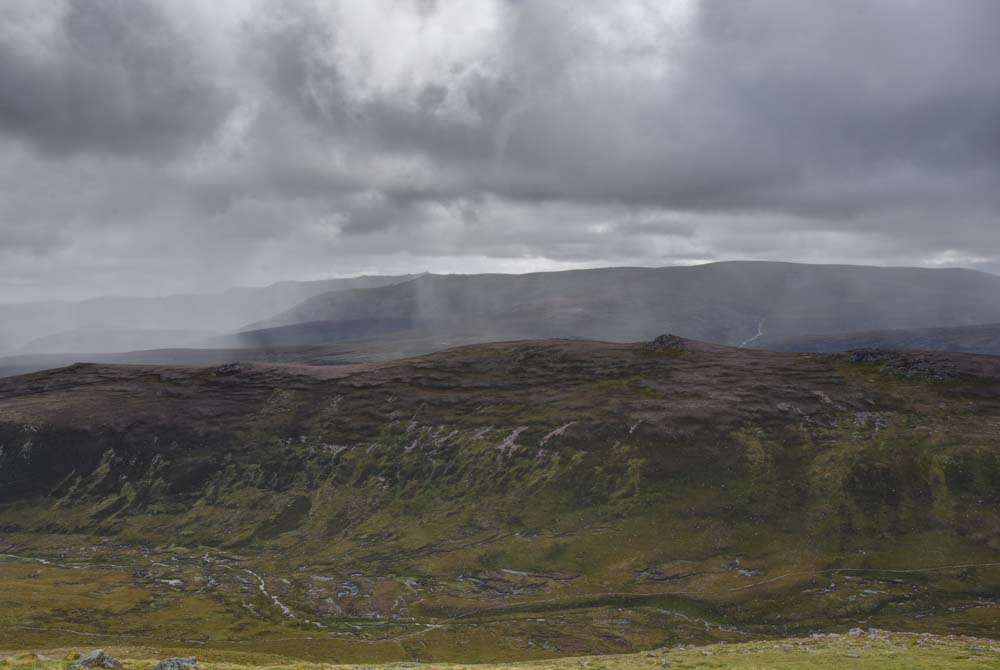 Creag Mhor is only 160m climb from the high point. No wonder the Corbett is so insubstantial looking from the Cairngorm giants.

Still has an interesting summit with a few classic Cairngorm cups. 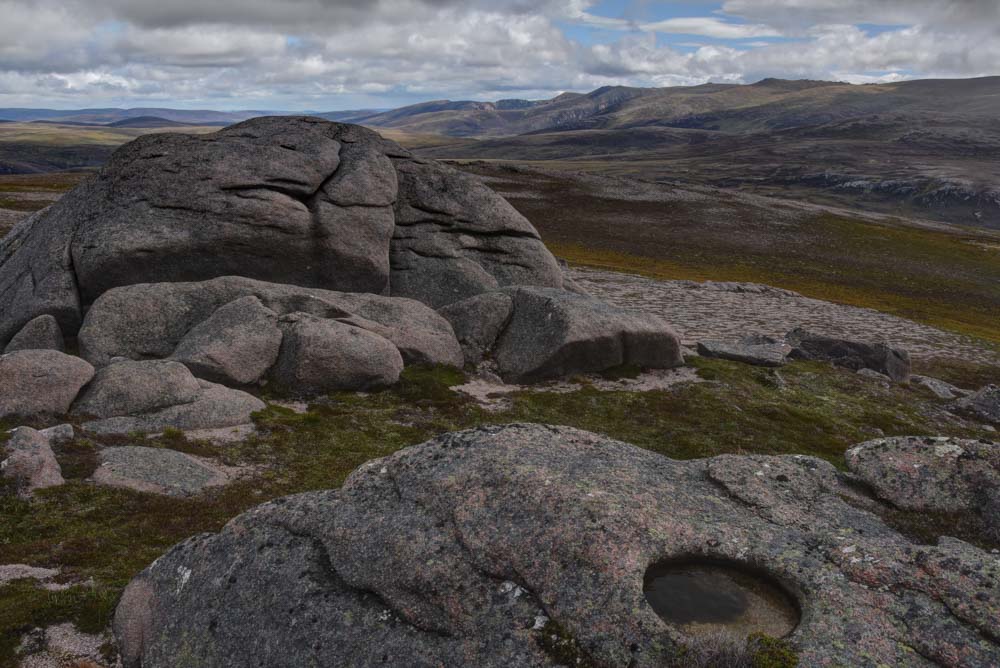 Turned for the return leg. An easy enough amble to rejoin the Bynack path on the north arm of Bynack before a quick yomp back to the car.

Return to the Bynack path: 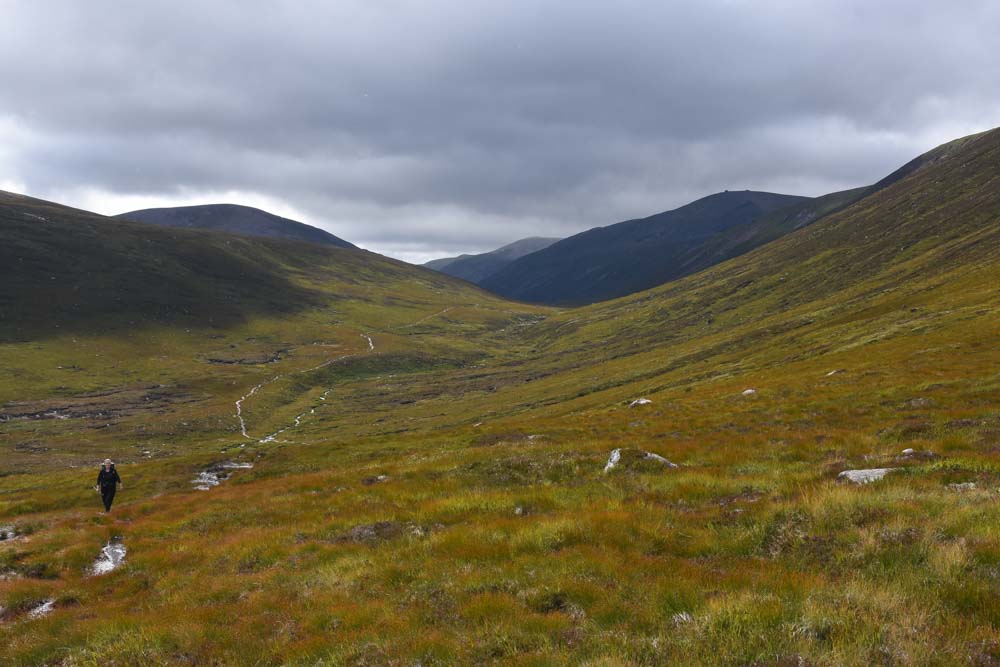 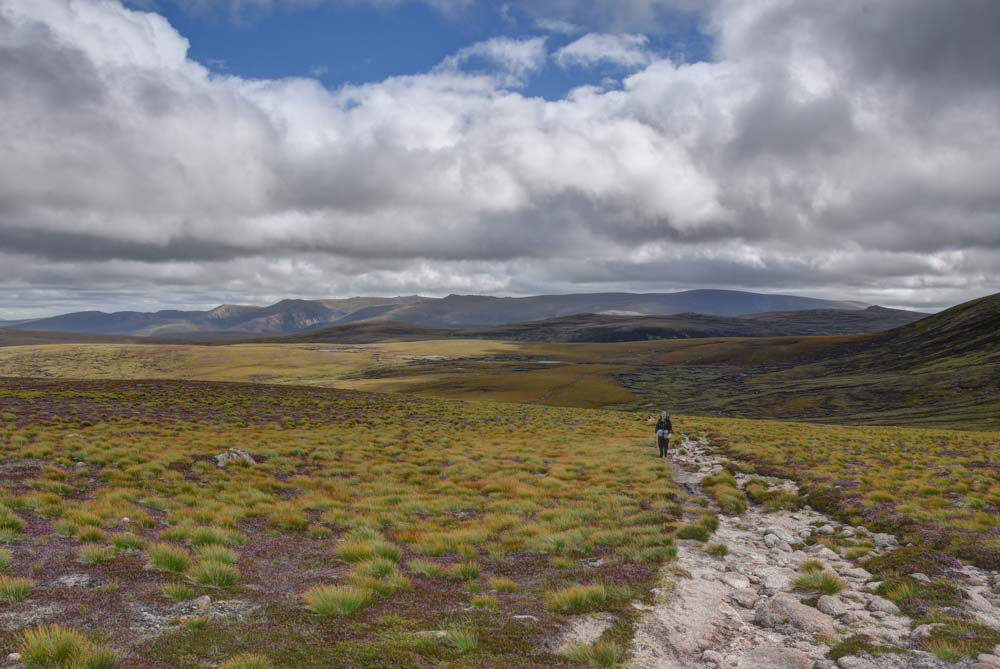 A pity the sun refused to shine – the heather is in bloom and the purples were muted in the gloom. 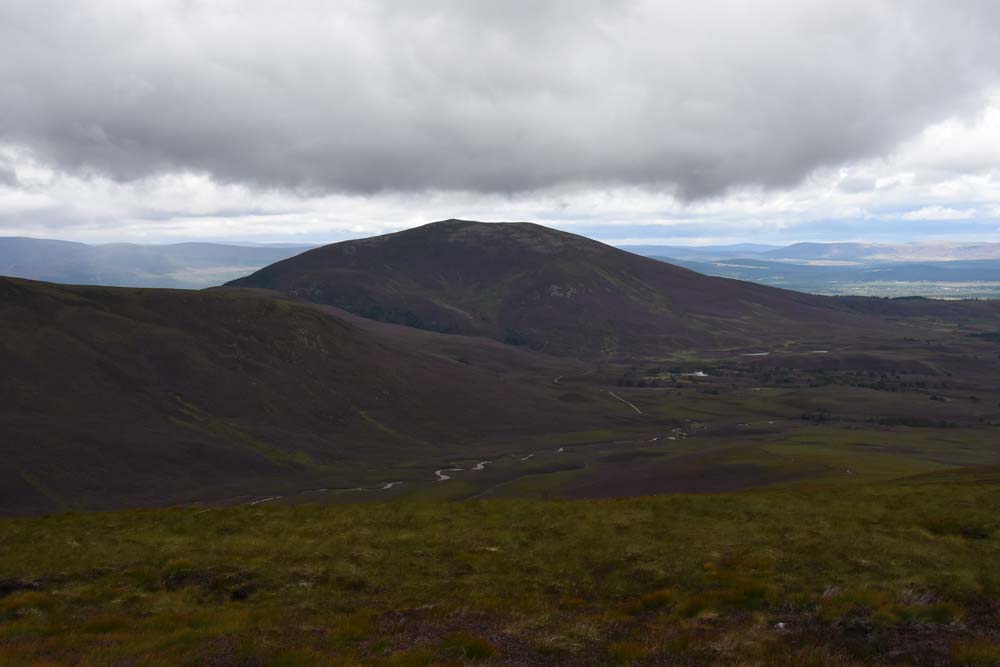 Enjoyable loop – glad we visited Bynack first as, despite the forecast, the early morning was much nicer.

Still waiting for some late summer mind you.