With the viral team member doing a passable hot water bottle impression overnight it seemed that our decision not to camp on Beinn Sgritheall was prudent, if disappointing.

We’d been up Sgurr nan Eugallt earlier in the year with an “under the weather” team member….revisiting Buidhe Bheinn on the other side of Loch Hourn in a similar state seemed to provide a certain symmetry.

The viral team member started the walk in enough clothes to head out of Spitzbergen on a husky sled. We headed 500m back along the road and took the estate drive to the house and gardens. 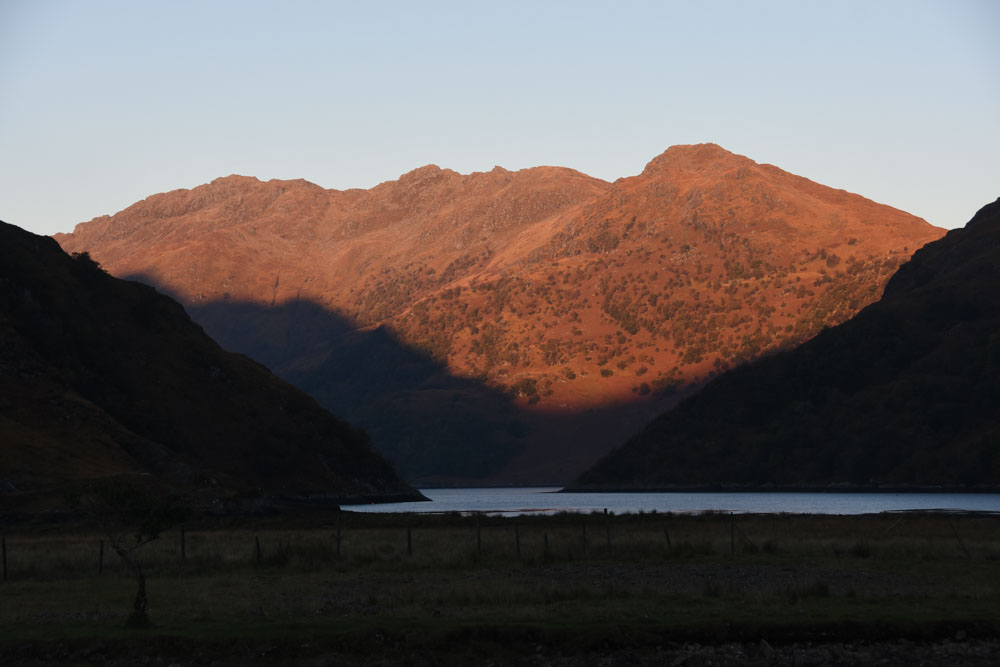 The Right of Way passes through the estate, right past the main house. It’s well sign posted and seems relaxed.

The estate garden has an interesting selection of exotic trees including quite a few Eucalypts. The rhododendron infestation appears to have been purged in the last year or two.
The path heads up through the gardens to meet the track from Coireshubh and carries on to Arnisdale and glenelg.

As we followed the power line up over the initial hill the sun was emerging from behind Meall an Uillt Bhain – the little peak on the south side of Sgurr a Mhaoraich Beag. 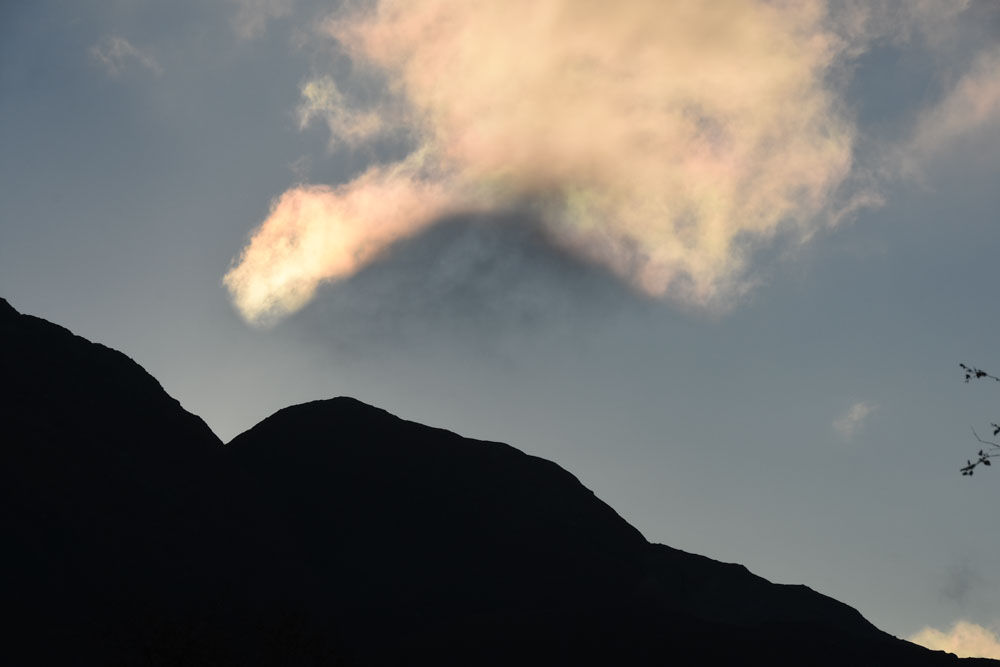 There’s a few stalkers paths on Buidhe Bheinn. They leave the right of way at NG 942 079. We used the west path to climb up to the west ridge.

It’s not long before the view along Loch Hourn to Ladhar Bheinn emerges. 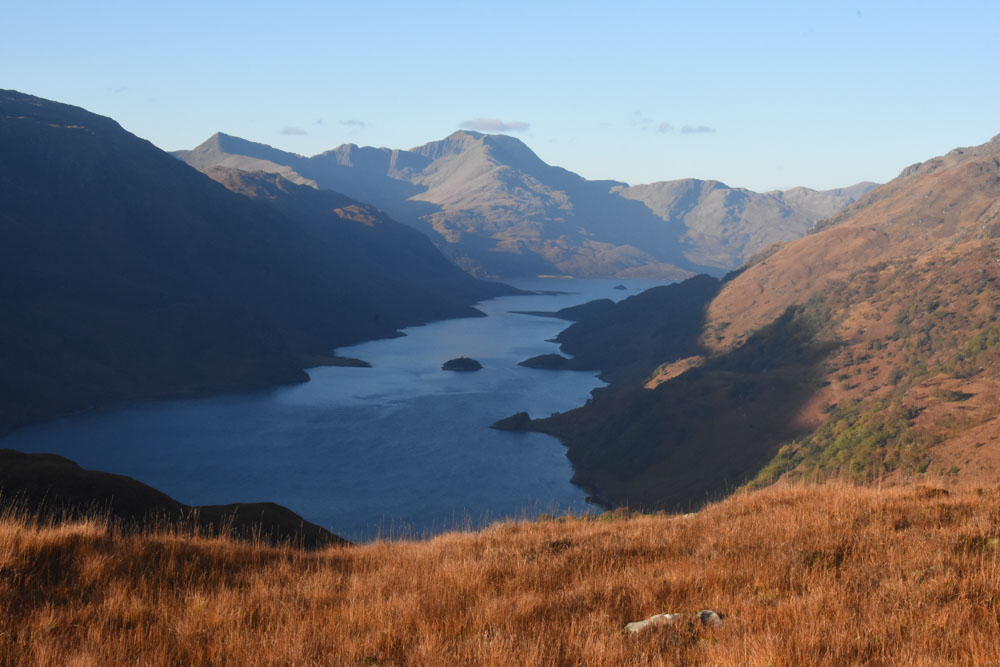 It’s a fine old stalkers path (like many in the area) and gives quick and easy access to altitude. 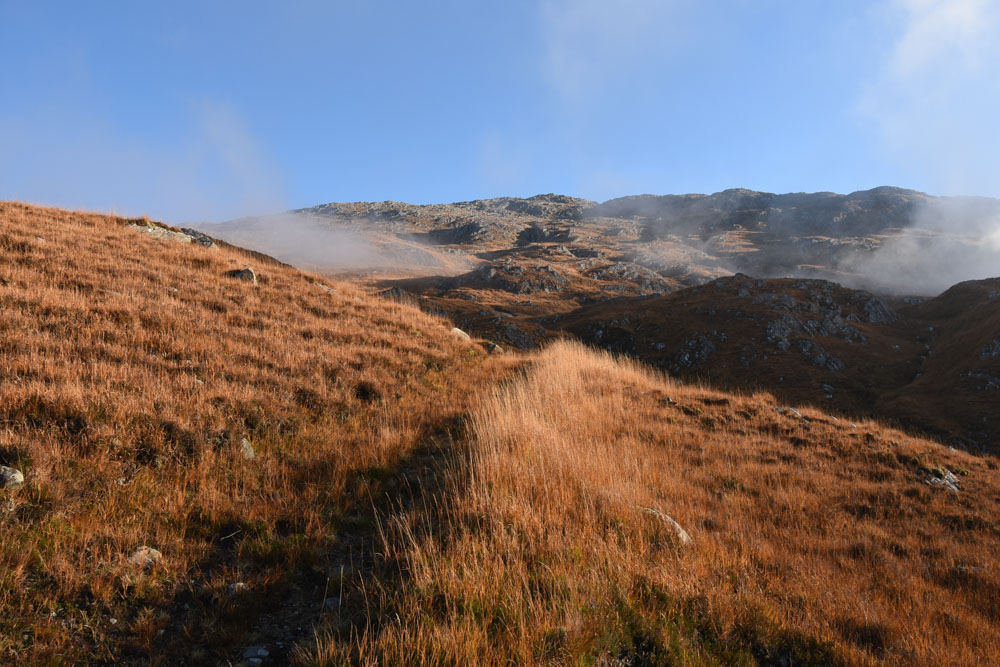 Cloud had been being driven along from Sgurr a Mhaoraich, happily it was at about 450m and we quickly passed above it back into full sunshine. 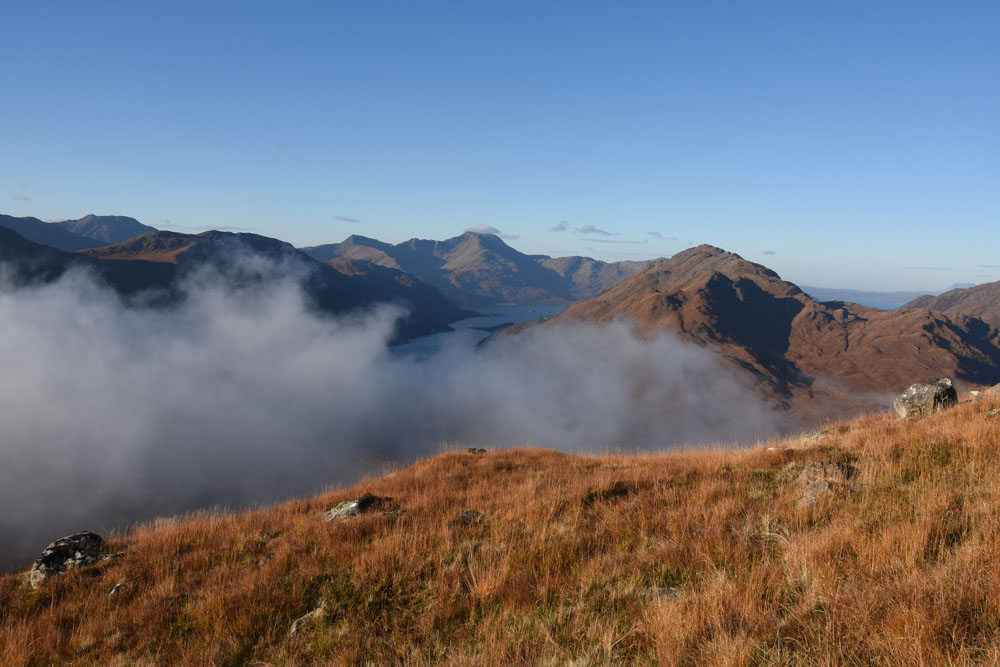 Followed the stalkers path up to 550m where it slants NE under the ridge. From there we headed up onto the ridge to ascend the 879m top. 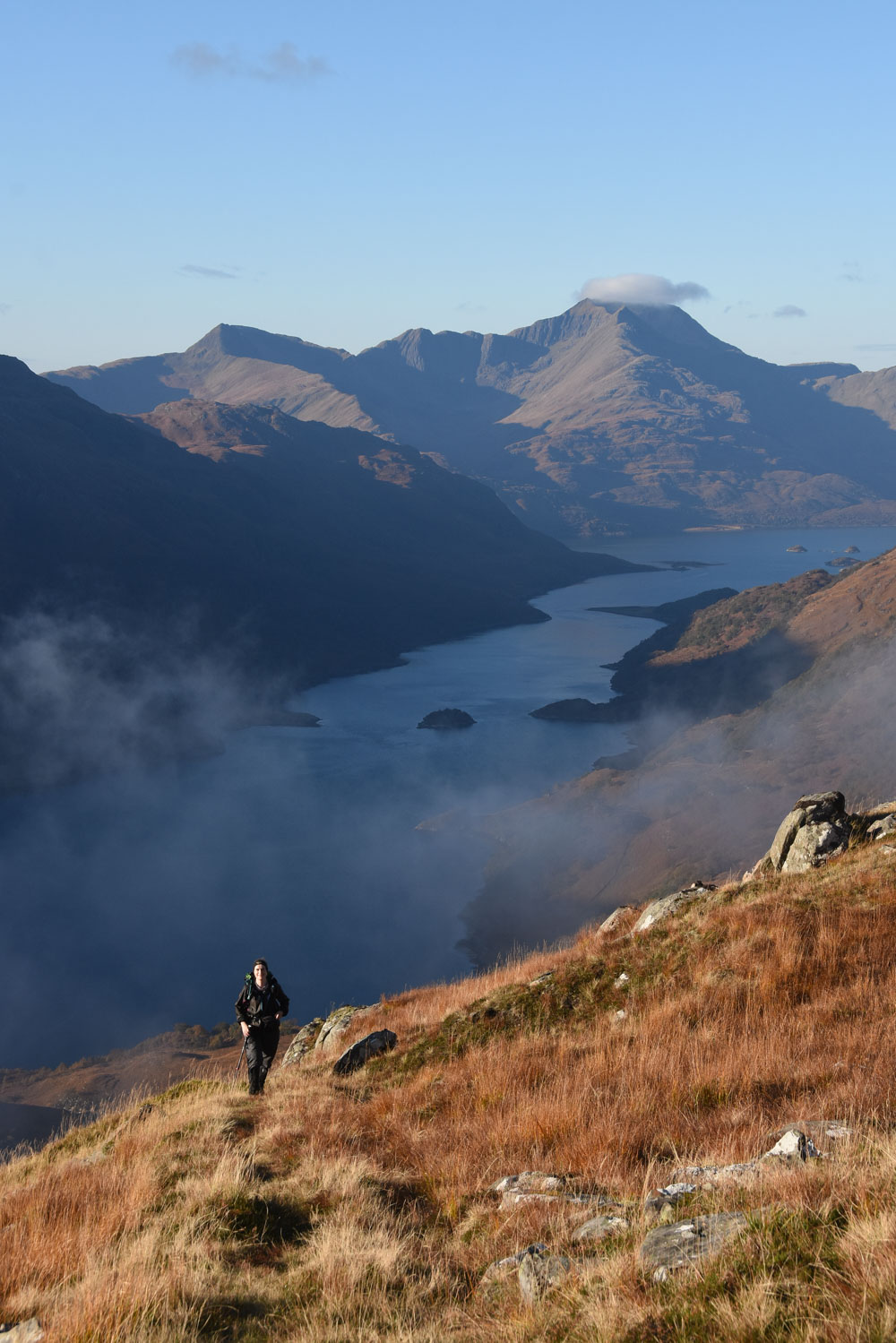 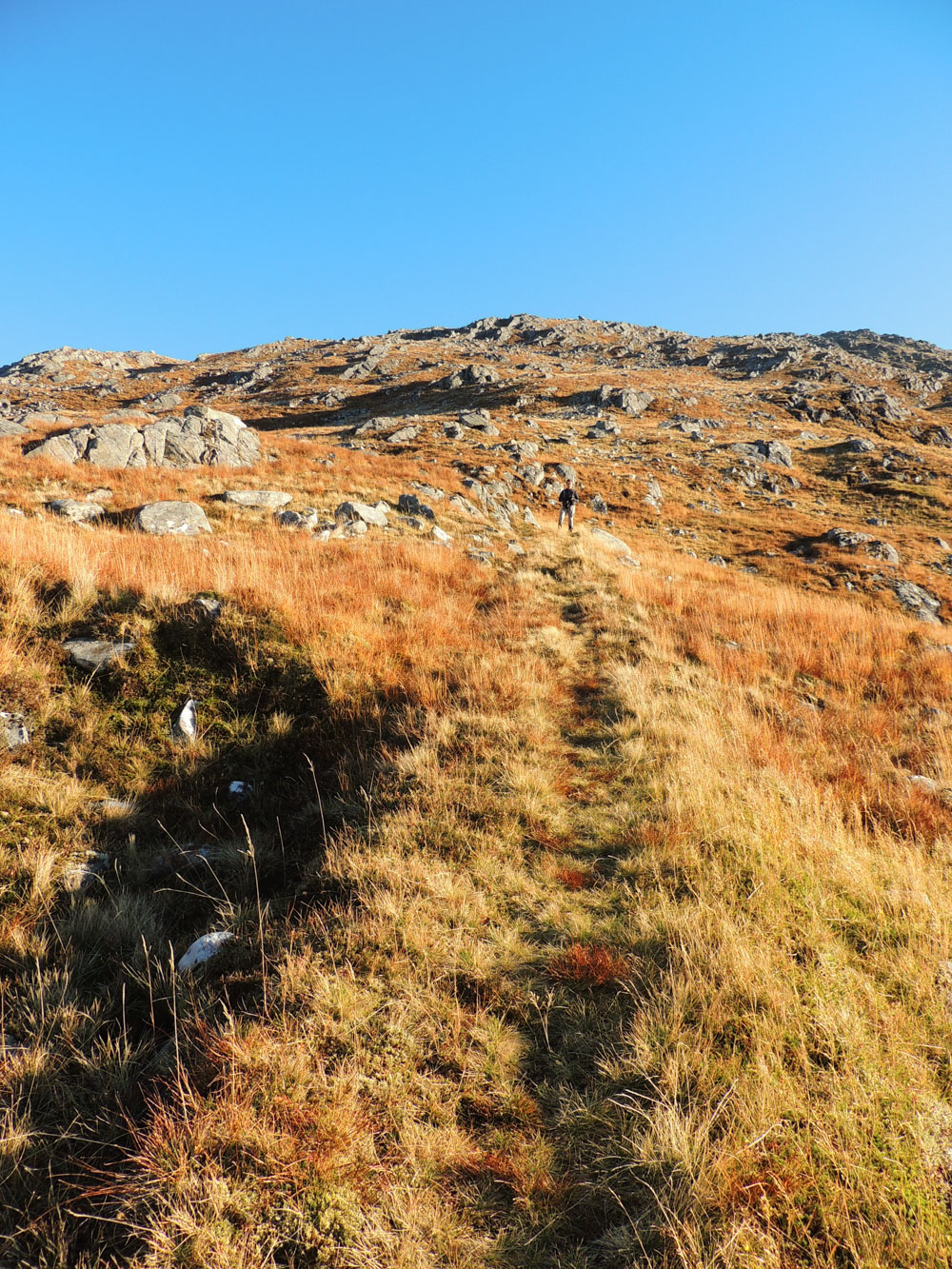 The ridge is easy walking, it has rather stellar views west to Ladhar Bheinn, Beinn Sgritheall and Skye. To the north The Saddle and Sgurr na Sgine dominate.

The real star is the view along Loch Hourn. A Scottish Fjord (the viral team member confirmed that they were not quite pining for the fjords like a Norwegian Blue). 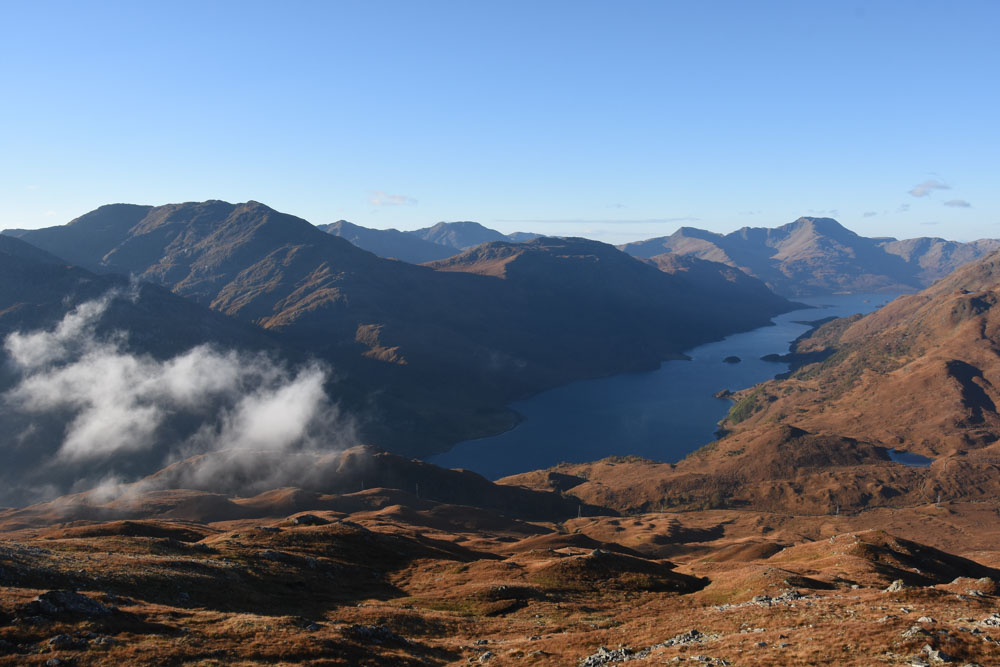 The ridge is quite Knoydarty (or rather it is typical of the Rough Bounds) – bobbly and complex it takes a lot longer to cross than the map suggests. 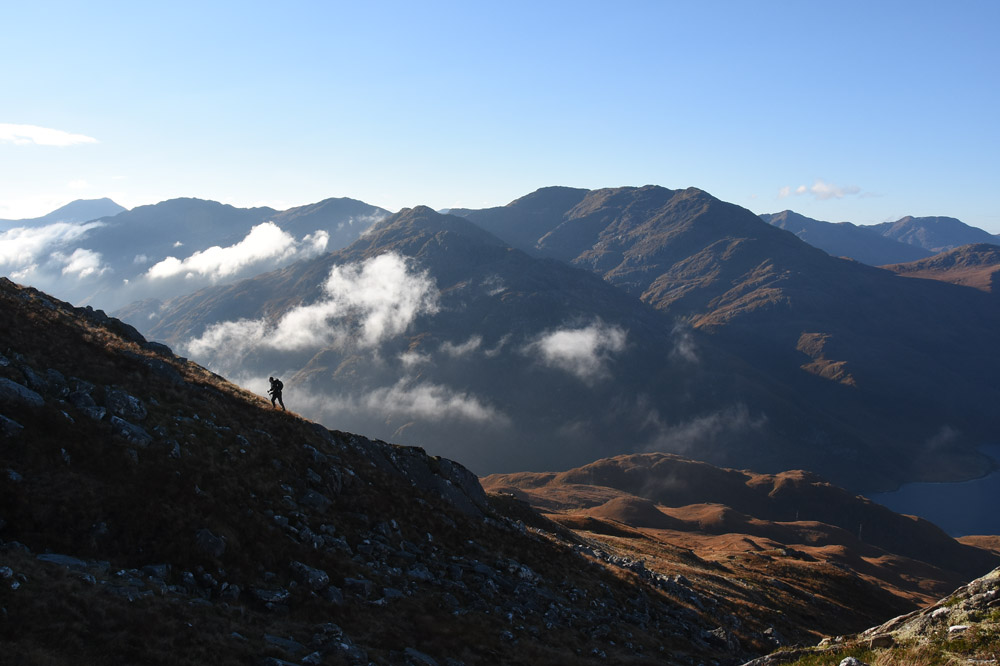 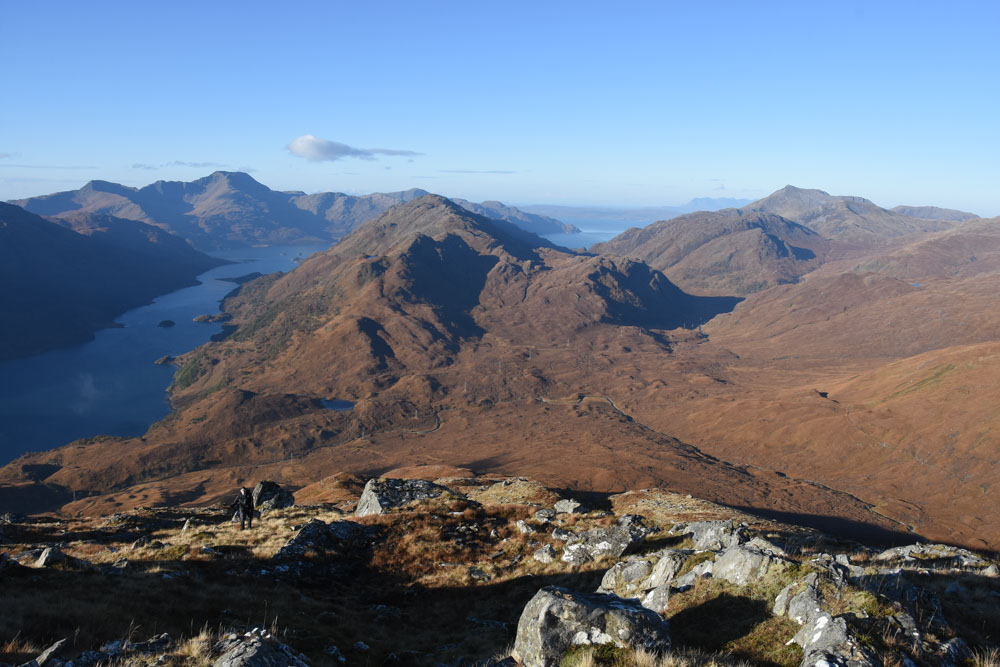 A few potential pitch sites were clocked while approaching the 879m summit, there is a plan to loop Sgurr a Mhaoraich and Buidhe Bheinn which would allow a summit camp here.

Quite a few pools near the top. 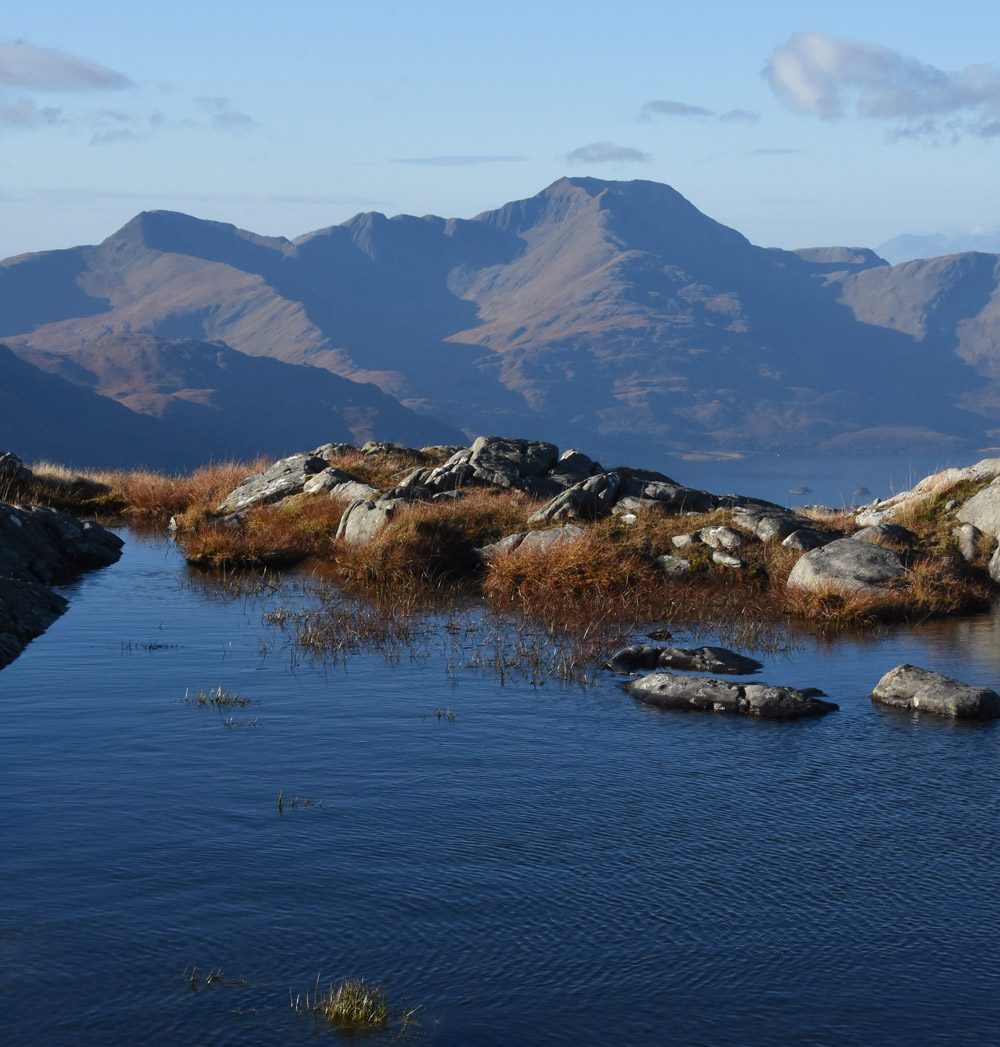 The 879m summit was finally reached and we took shelter from the cool, brisk easterly to eat lunch and enjoy the view. 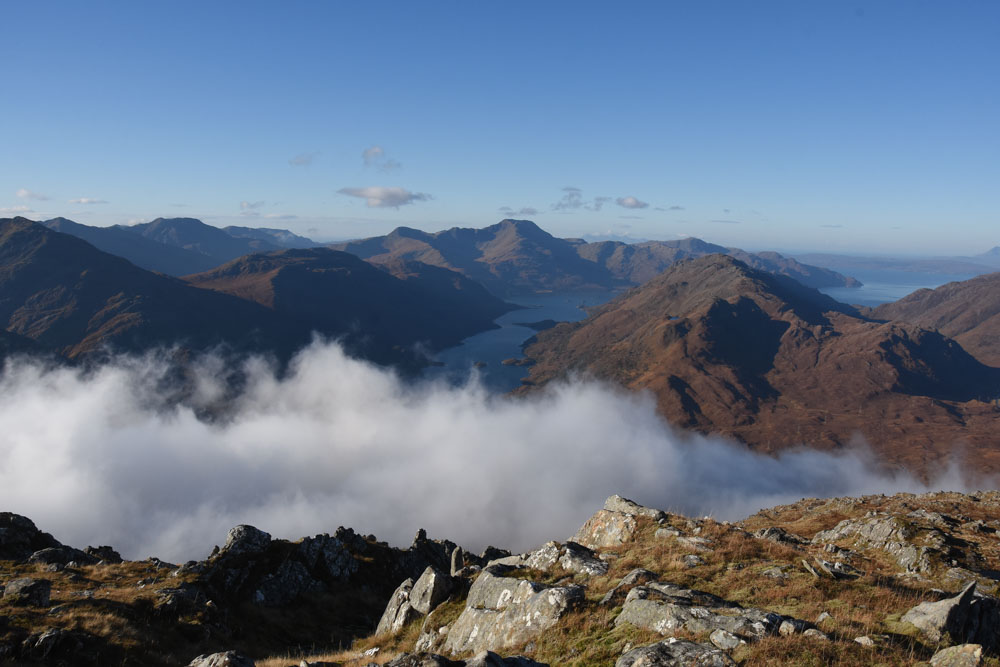 Out to the south and east there was obviously a lot of wind-driven cloud. 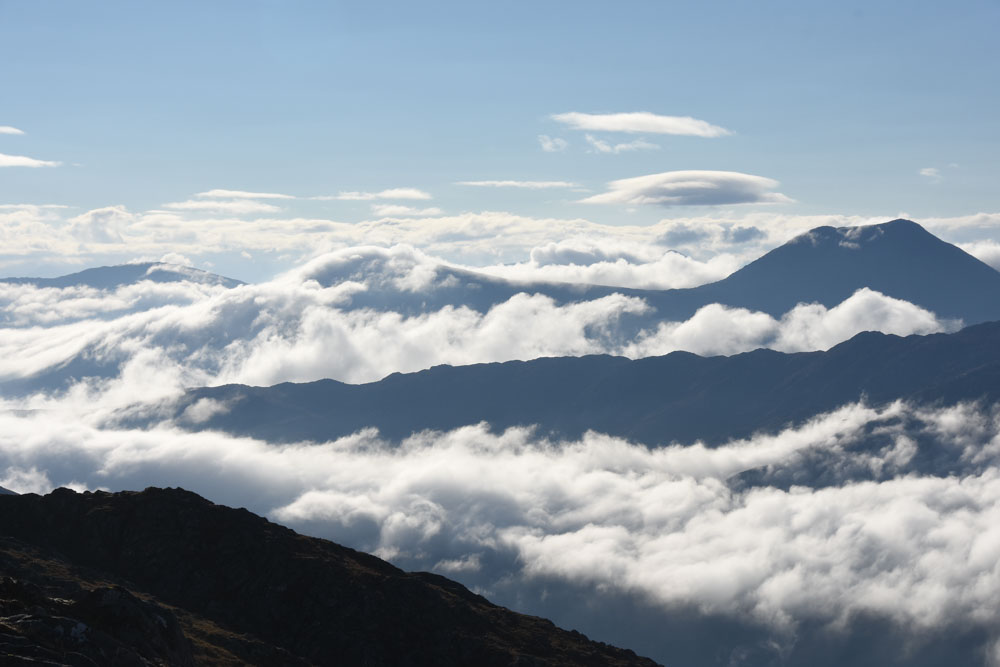 We’d planned to drop south to the lochan and pick up the other stalkers path as before. 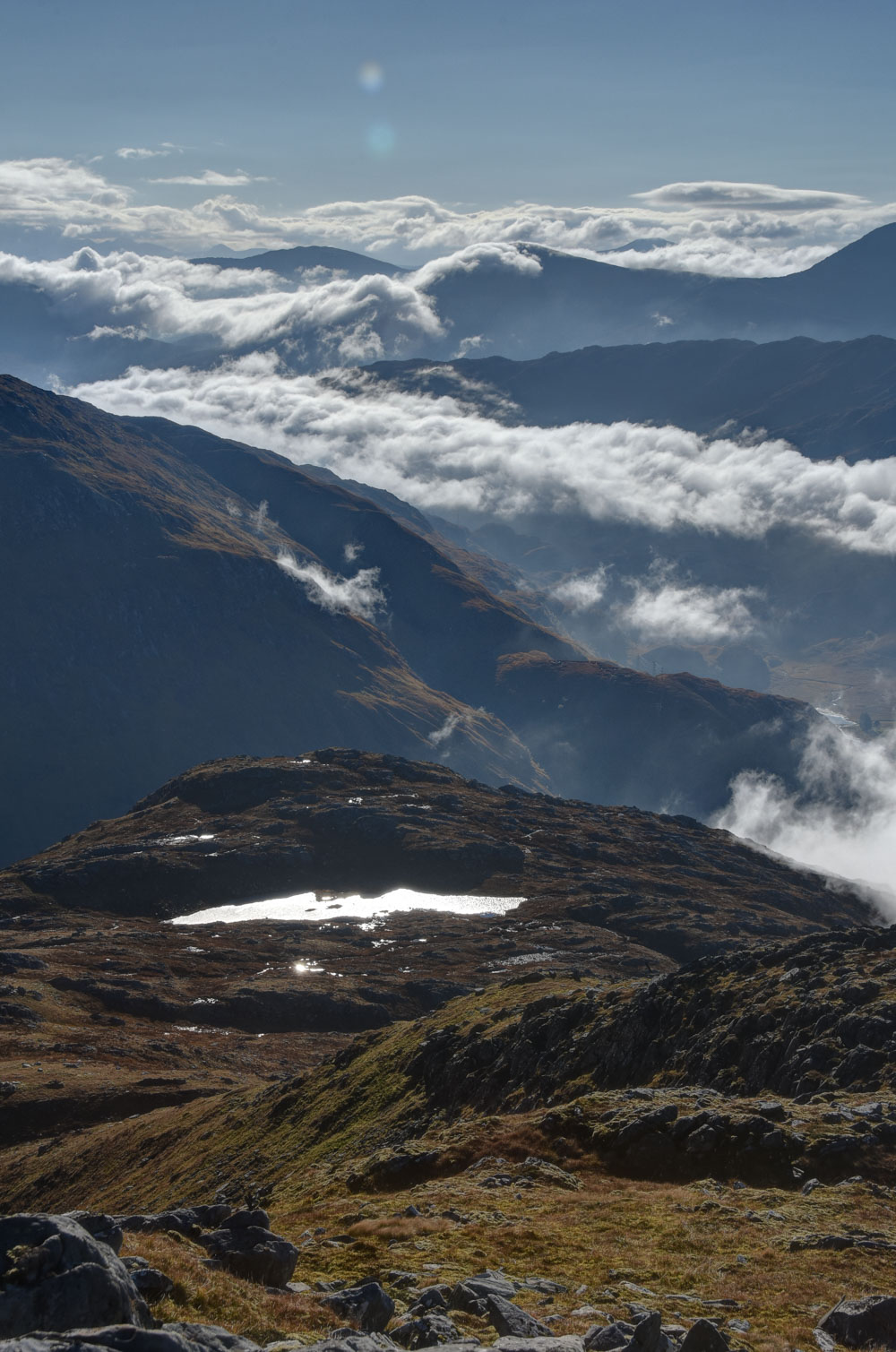 The “true” summit of Buidhe Bheinn lies 750m across a narrow ridge. This was entertaining on snow last time round. 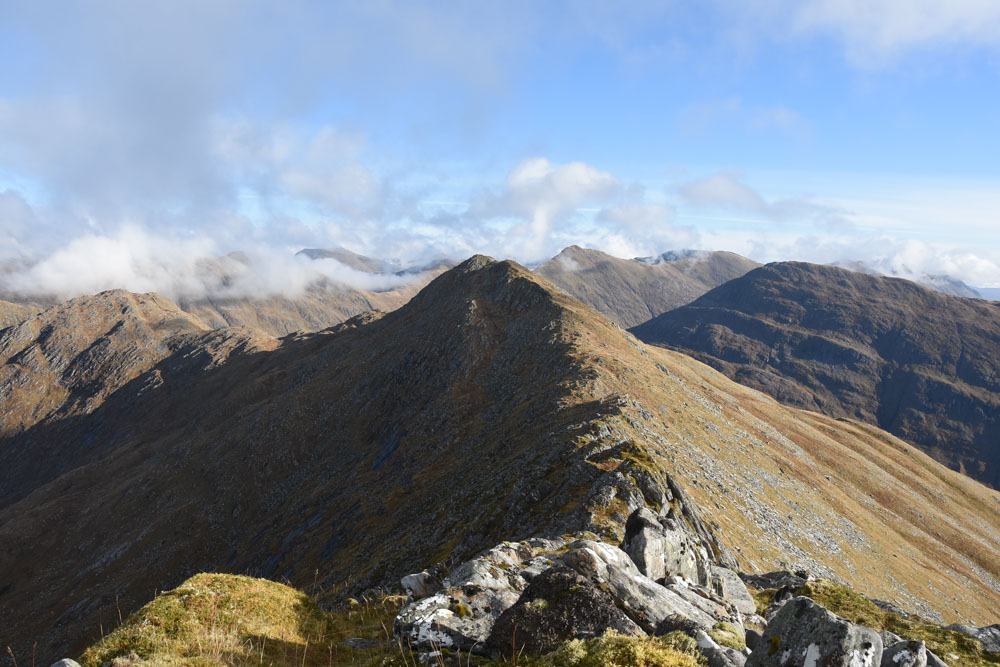 We sat around and enjoyed the view. Neither of us felt the need to visit the other summit with its 6m height gain so we just enjoyed the views of the rather superior lower top.

Lochan on the south ridge: 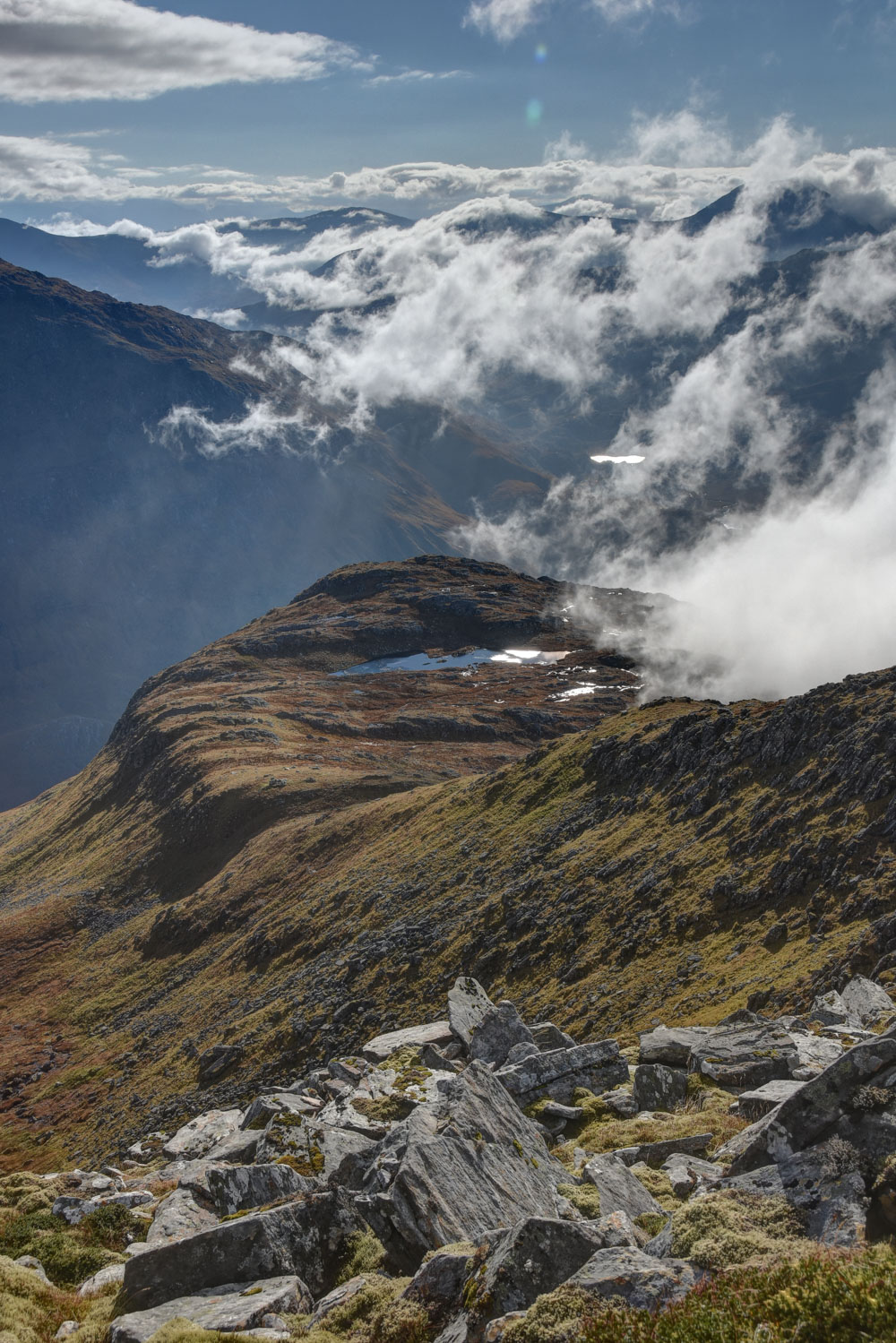 A few will o’ the wisps around.

Will o’ the Wisp: 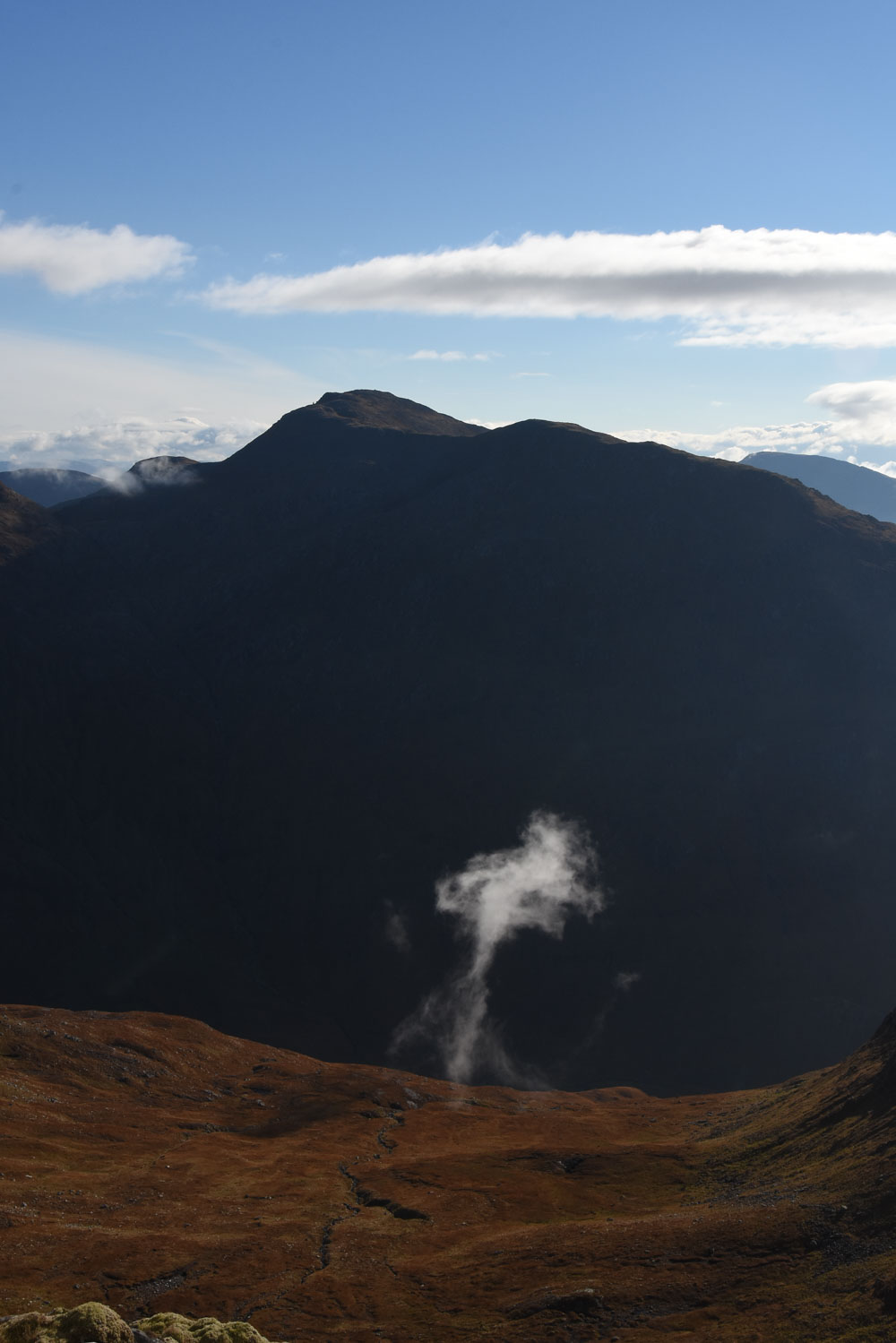 It is a cracking view west. 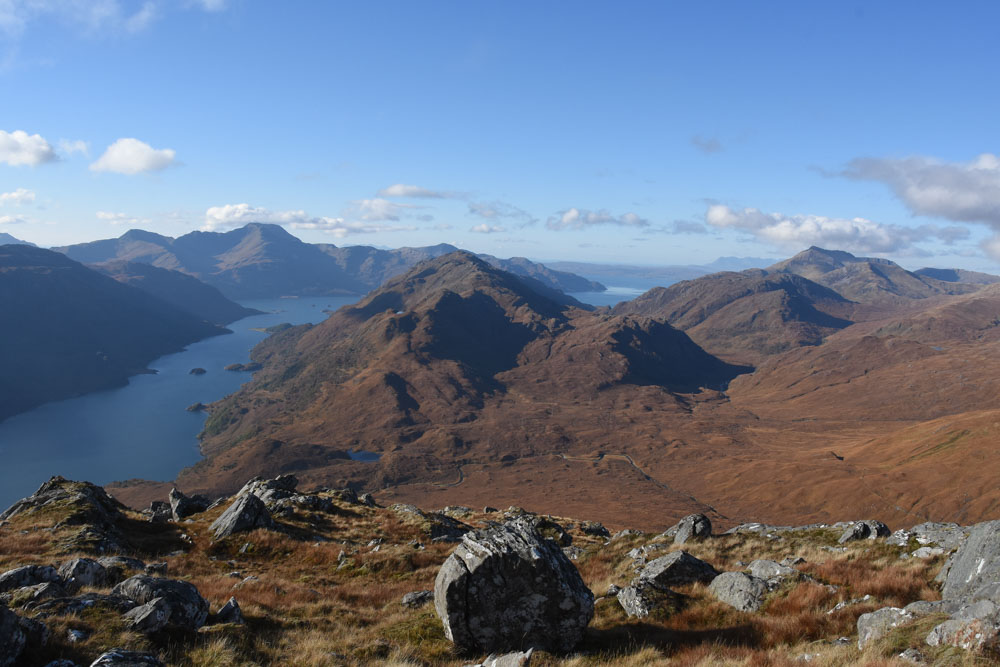 Still not sure that we shouldn’t have just gone for the Sgritheall summit camp….Sunday morning must have been awesome. 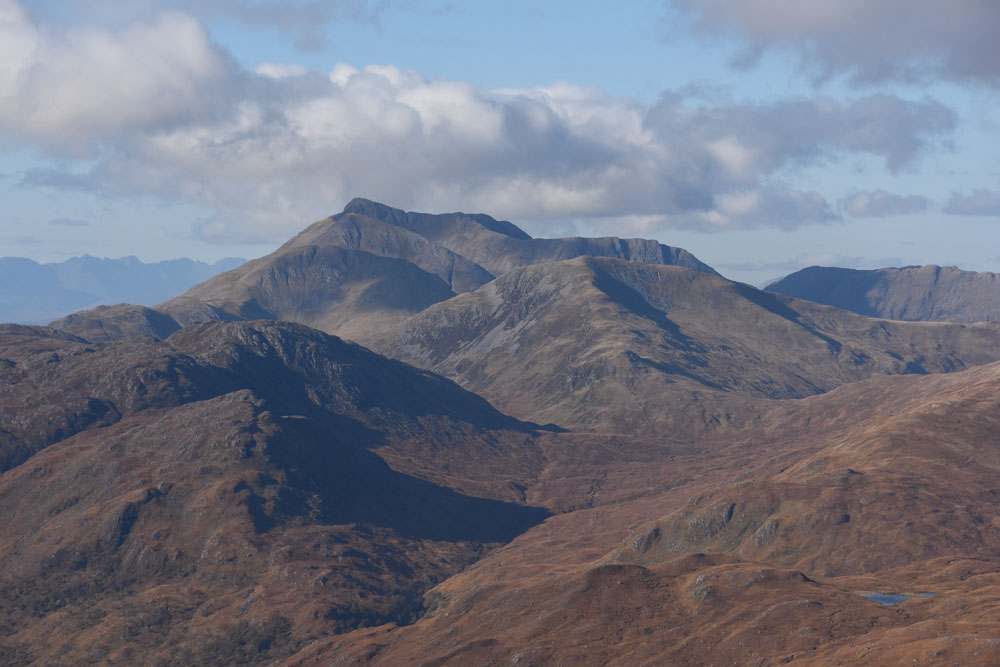 We’d planned on heading south, but the cloud streamer was being driven along that side, so we retraced our steps instead, descending the west ridge. 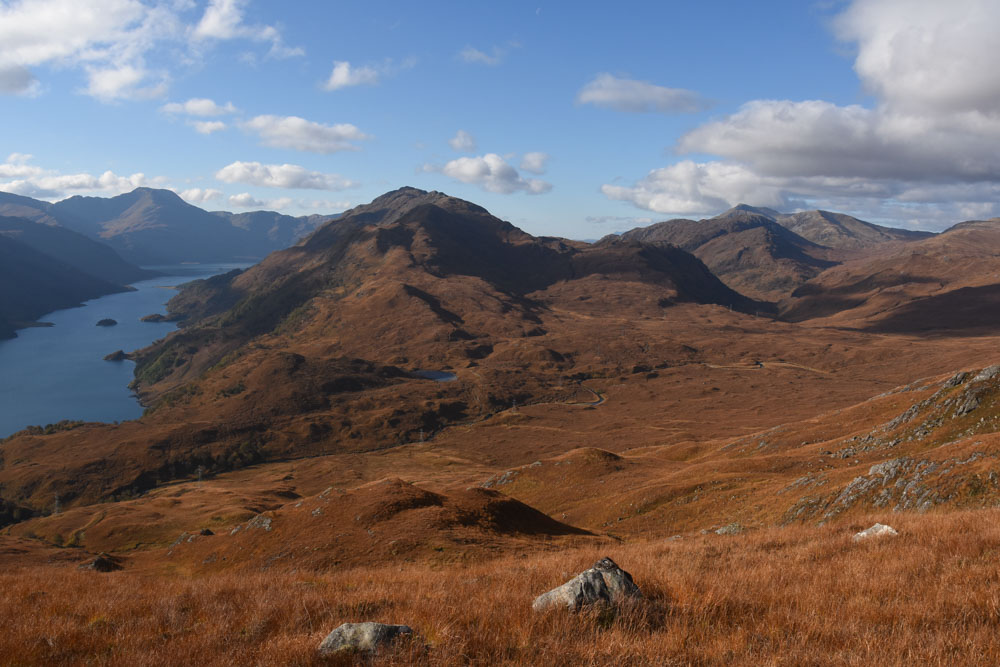 A lovely afternoon – the grasses have a beautiful quality and colour for now, before the storms and snows snap and flatten them over the winter. 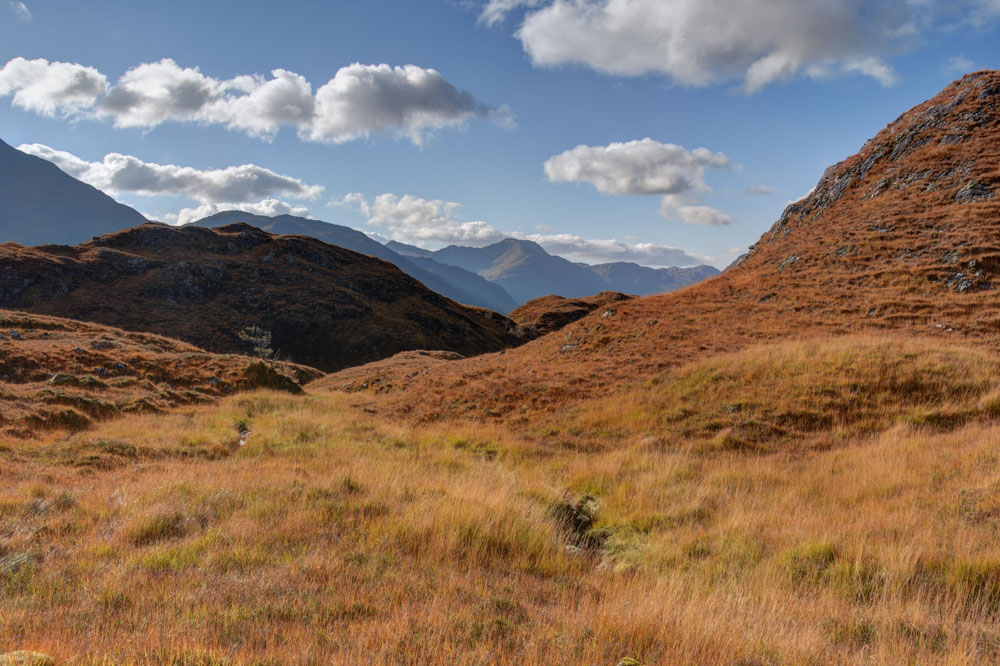 Slowed and slowed, not illness but simply loathe to reach the car and start for home. 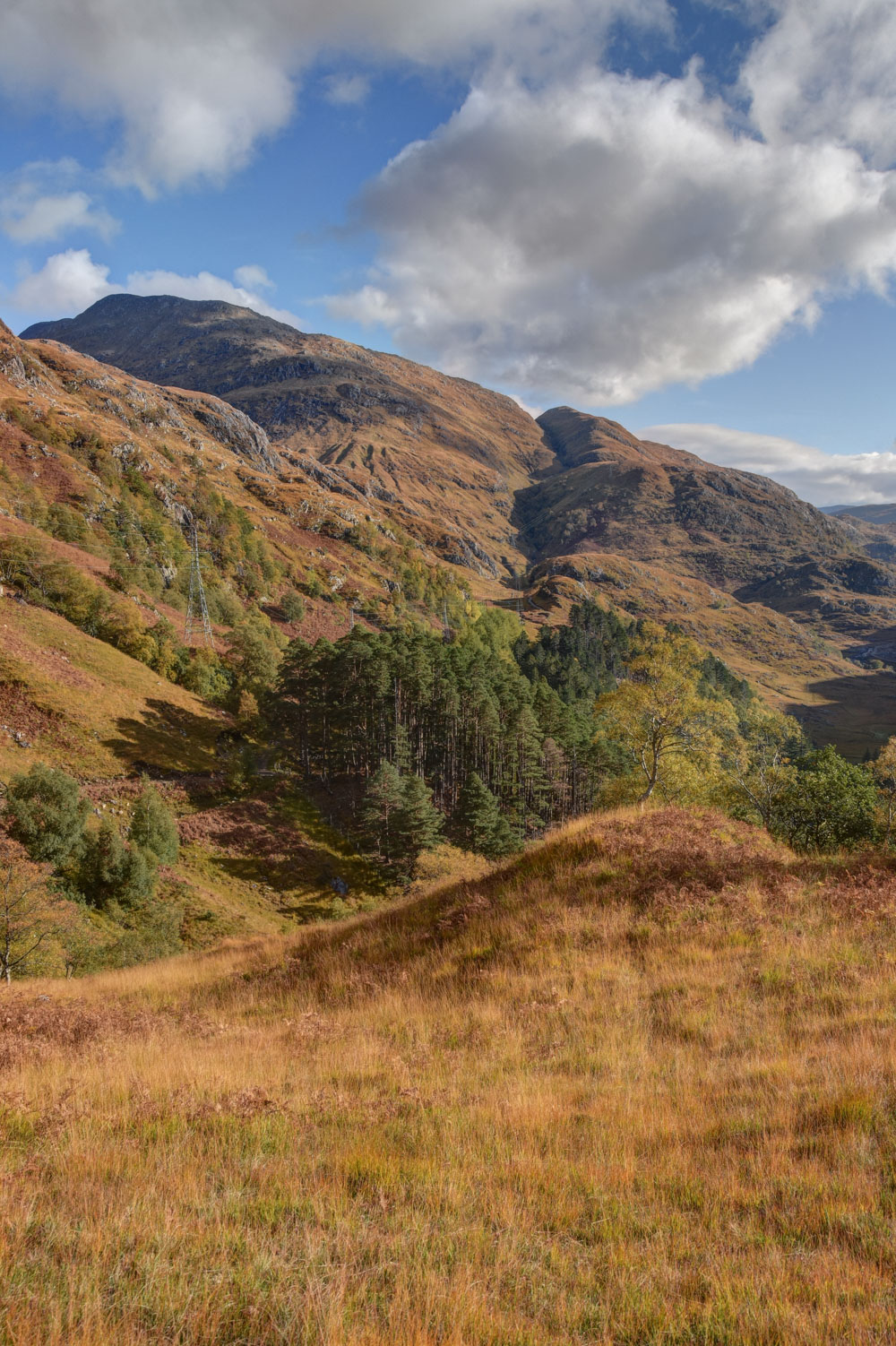 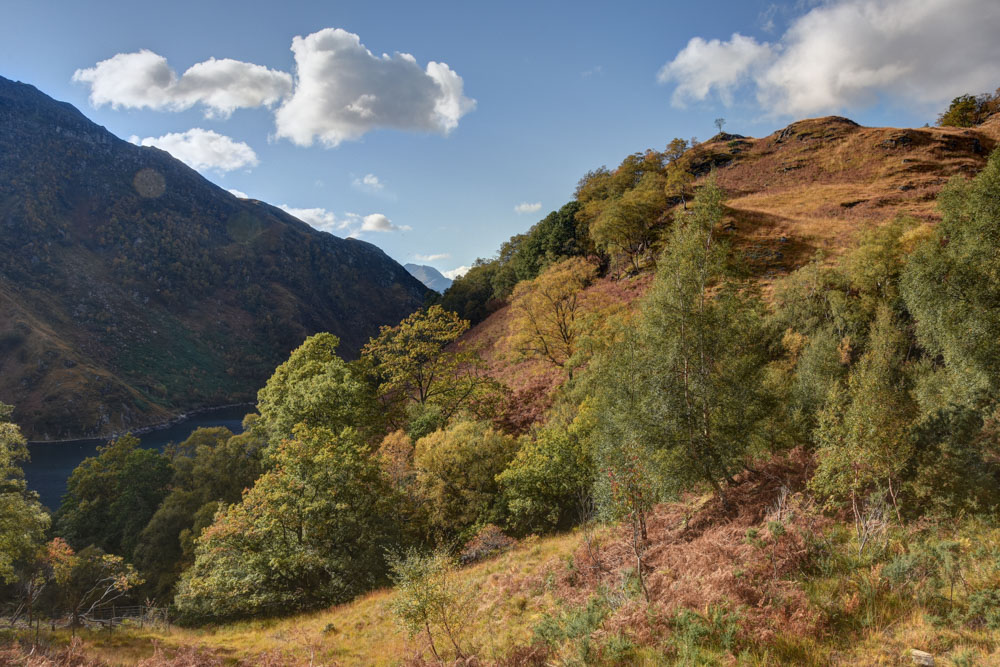 We’ve spent the year revisiting a lot of favourite places. It’s rather pleasing that there are so many of them. Kinloch Hourn is definitely up there as one of the jewels of the NW Highlands.

Unfortunately its antiviral properties are ephemeral.