Best weather for the weekend seemed to be towards the Cairngorms with the odd tantalising hint of inversions.

The last day before the annoying clock change gave a dawn of around 0830 which allowed a decent pre-dawn start without a very early rise.

Kicked off from the Cairngorm car park at just after 0700 and headed straight up Fiacaill a Choire Chais. Even for slower walkers like us this gives access to the plateau in around 1 hour. 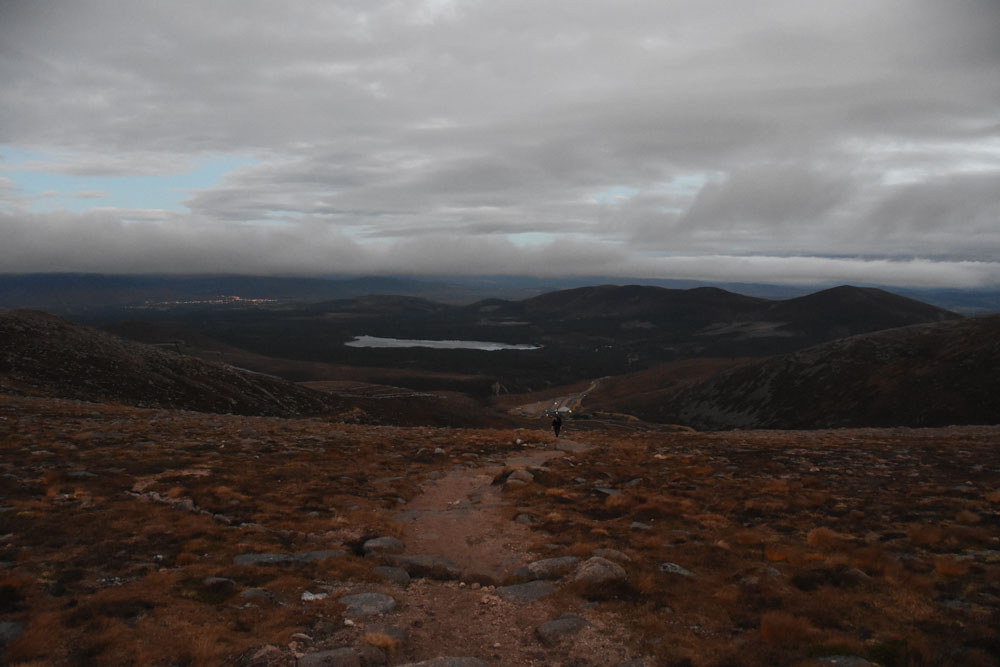 The sun hadn’t risen when we arrived, although brightness was building behind Beinn Mheadhoin. 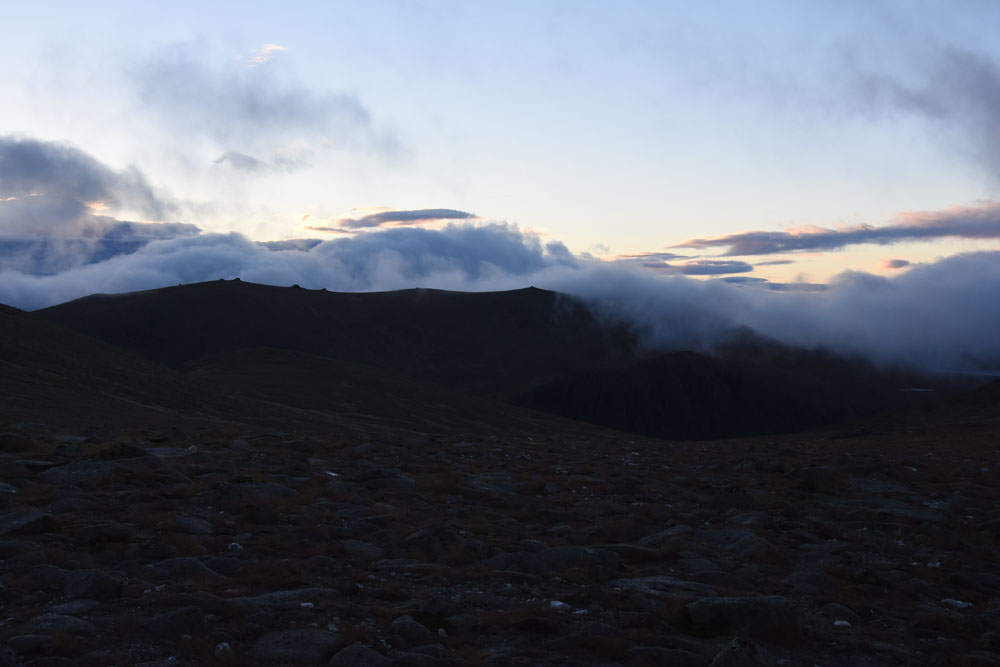 Had some breakfast at the cairn and waited for dawn. When the sun did break the horizon it cast a rather solid shadow with a hint of Glory onto the clouds to our north. 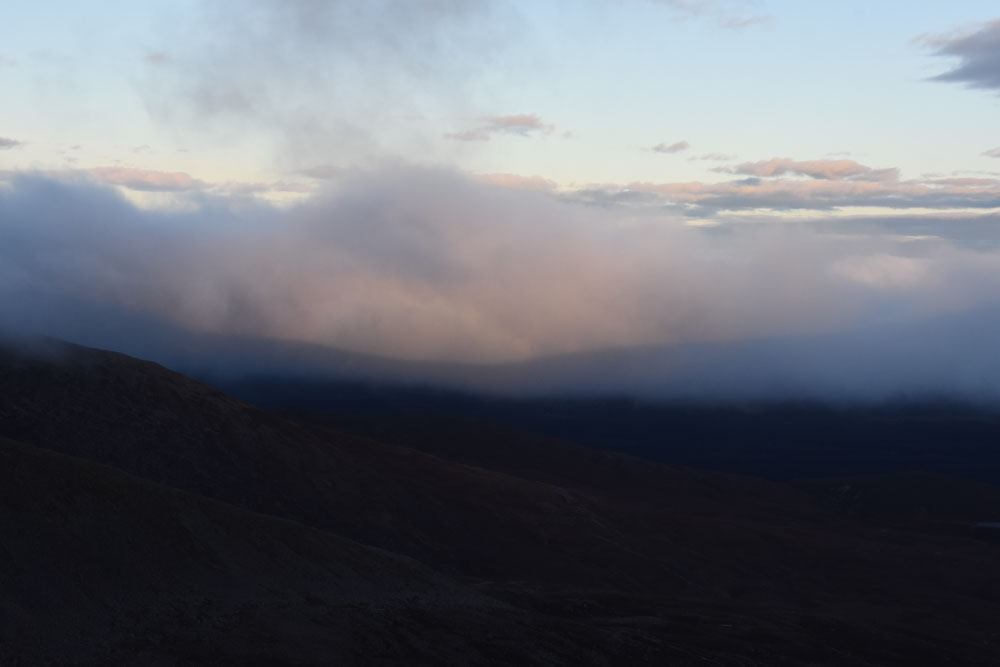 It was a rather atmospheric morning. To the south there was an inversion of sorts. Whipped up by the brisk wind and driven onto hills to our south and west.

Derry Cairngorm was hidden at first, clearing after a few minutes with the top Creagan a Choire Etchachan in front. 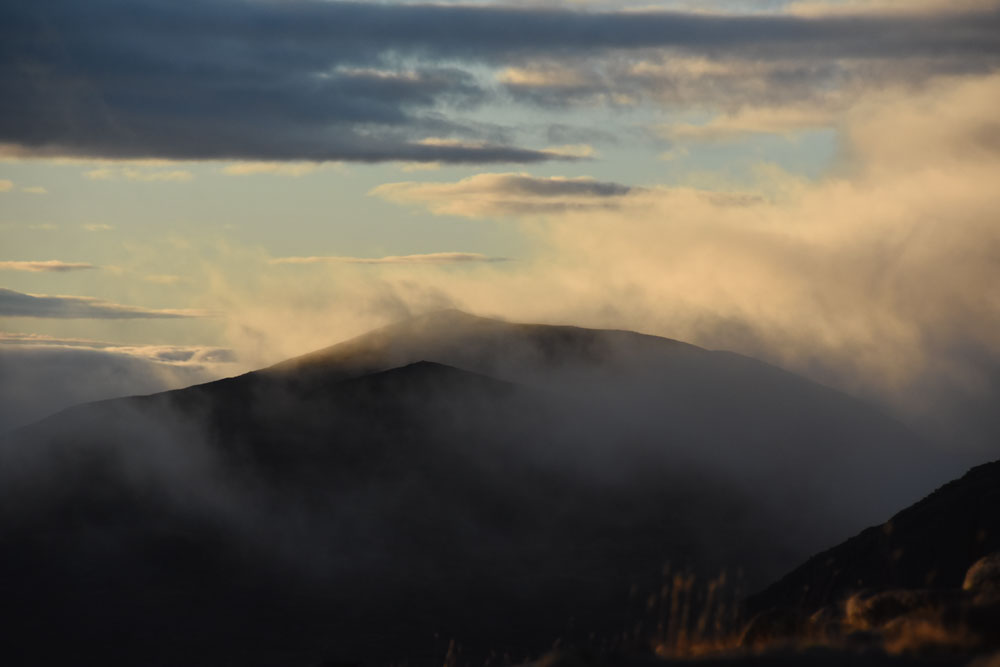 The Fiacaill ridge was catching a bit of the early sunshine as we headed towards Stob Coire an t-Sneachda. 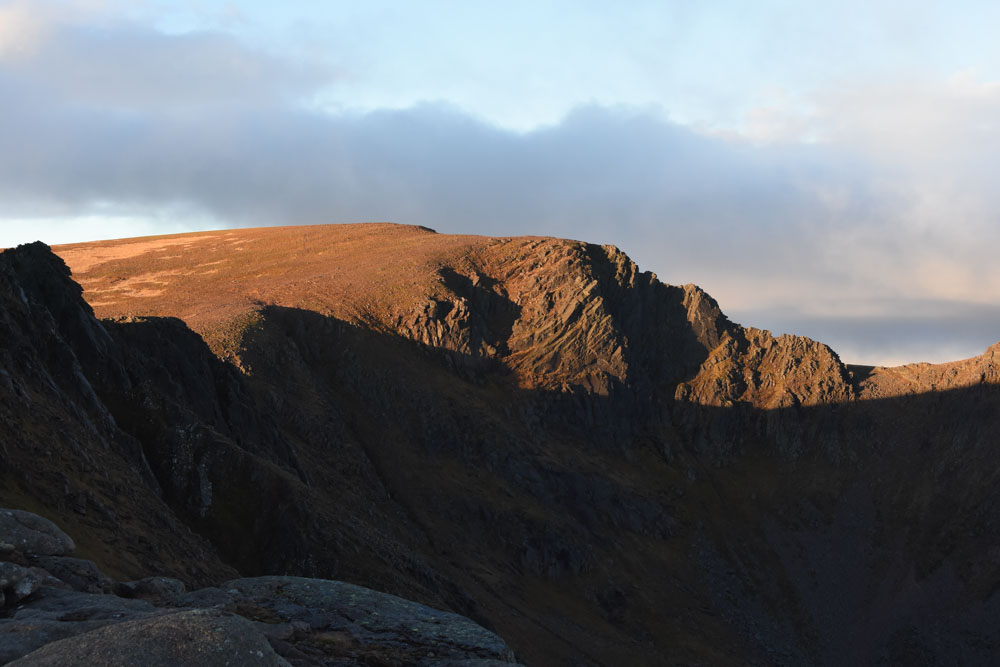 After squeezing past the crowds earlier in the year it was pleasant to have the whole area to ourselves for a little while.

The view south was an ever changing swirl of mists and clouds. 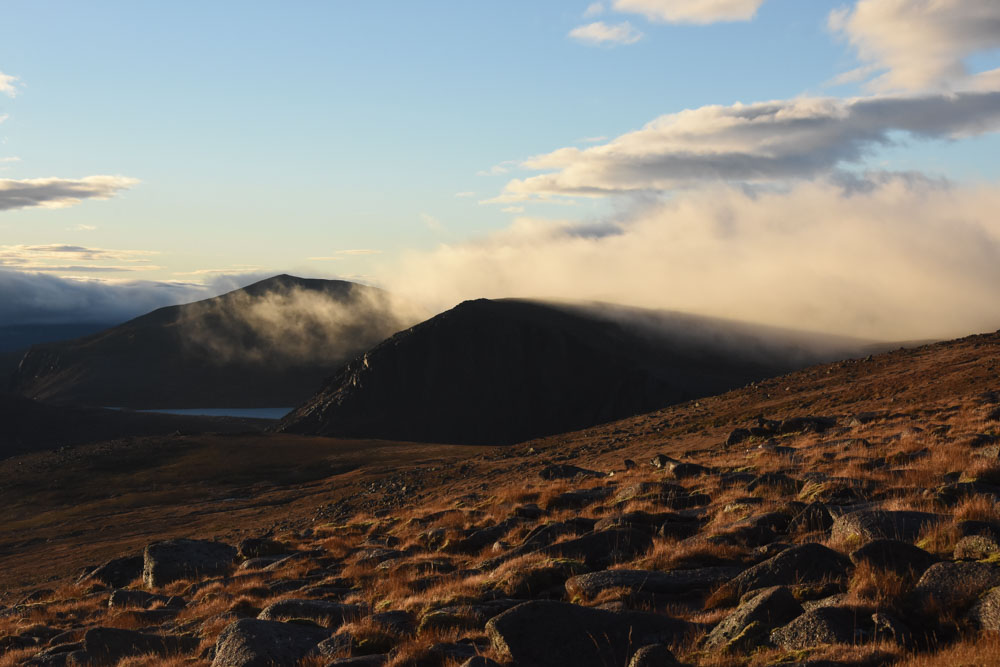 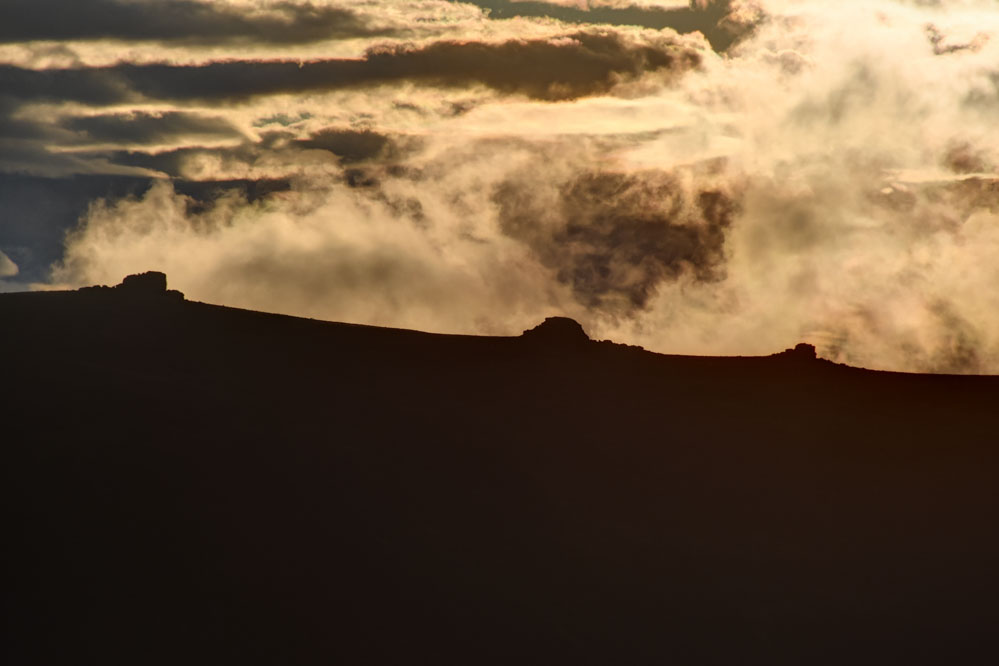 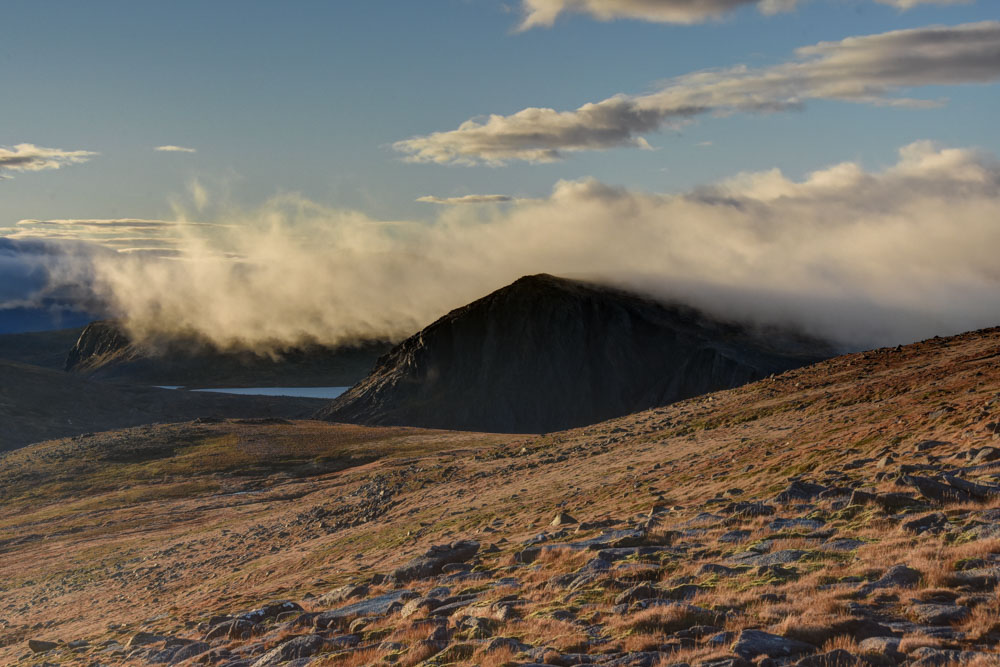 Two ravens flew back and forward over us for a while, checking out the first people of the day. We always enjoy watching ravens. 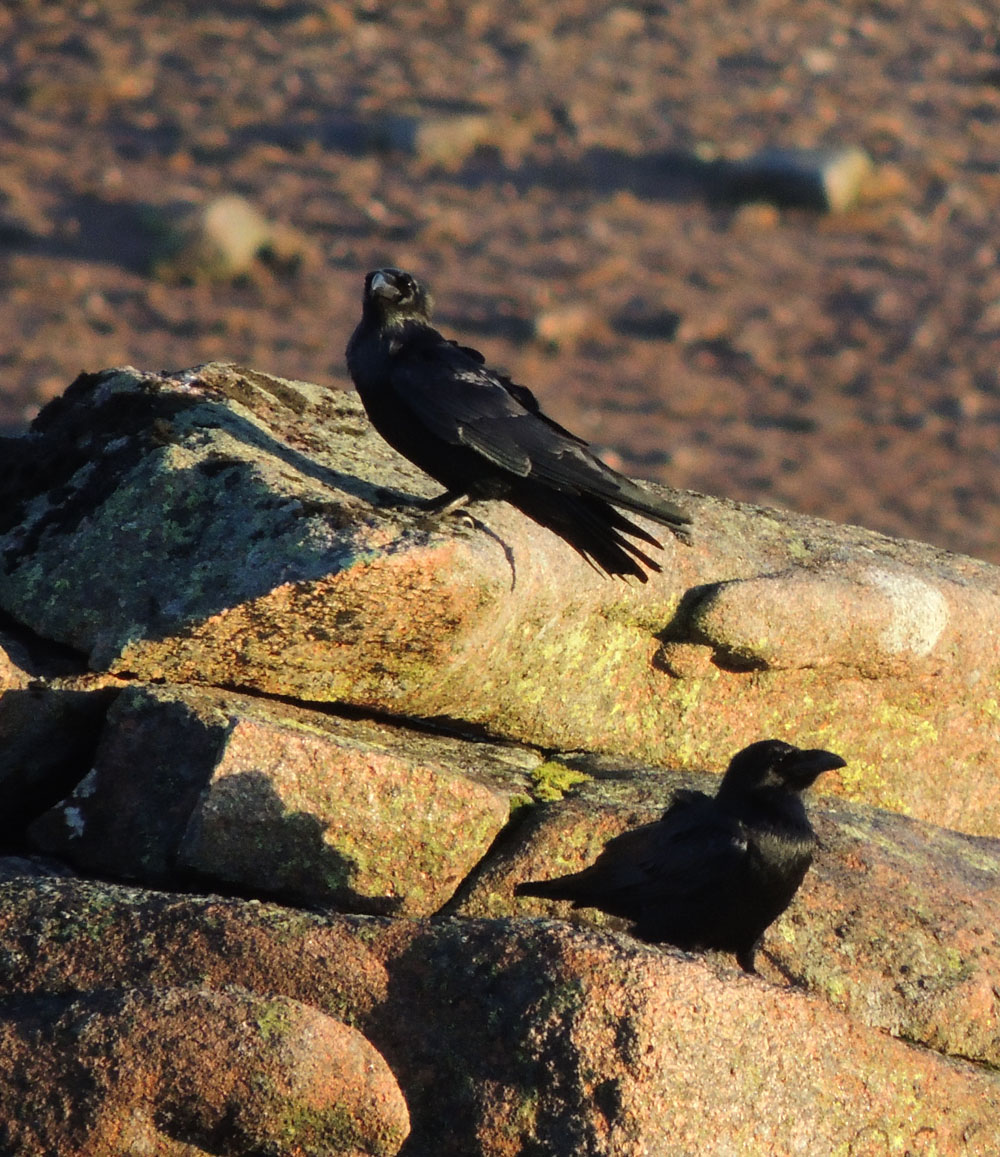 We carried on over Stob Coire an t-Sneachda and eventually up and over Cairn Lochain.

To the south west the munros on the other side of Lairig Ghru were buried in a cloud avalanche, only hints of the hills showing their presence. 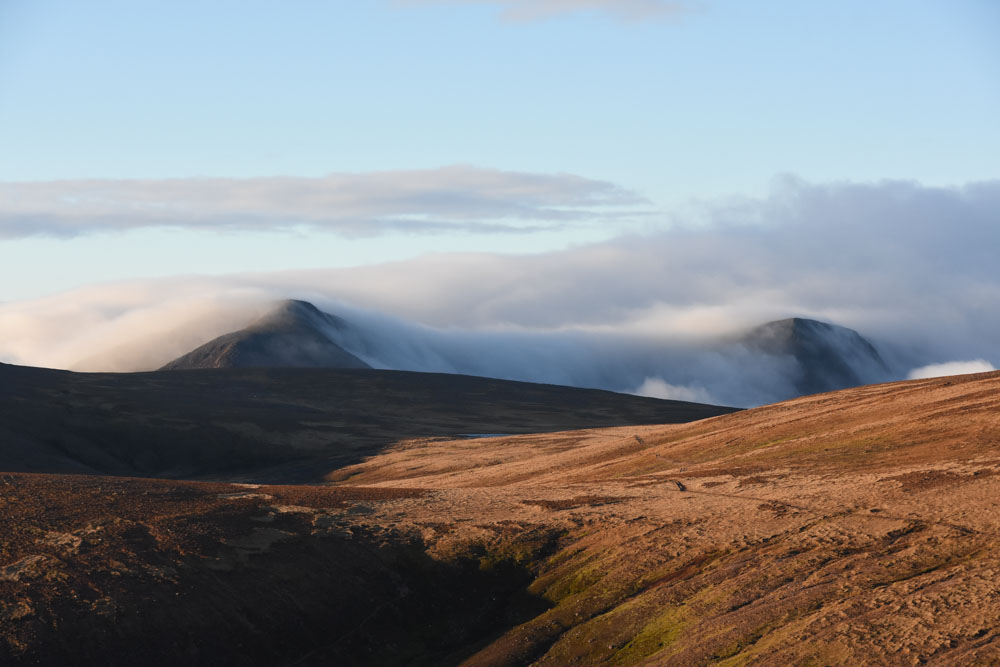 Messy inversion to the south: 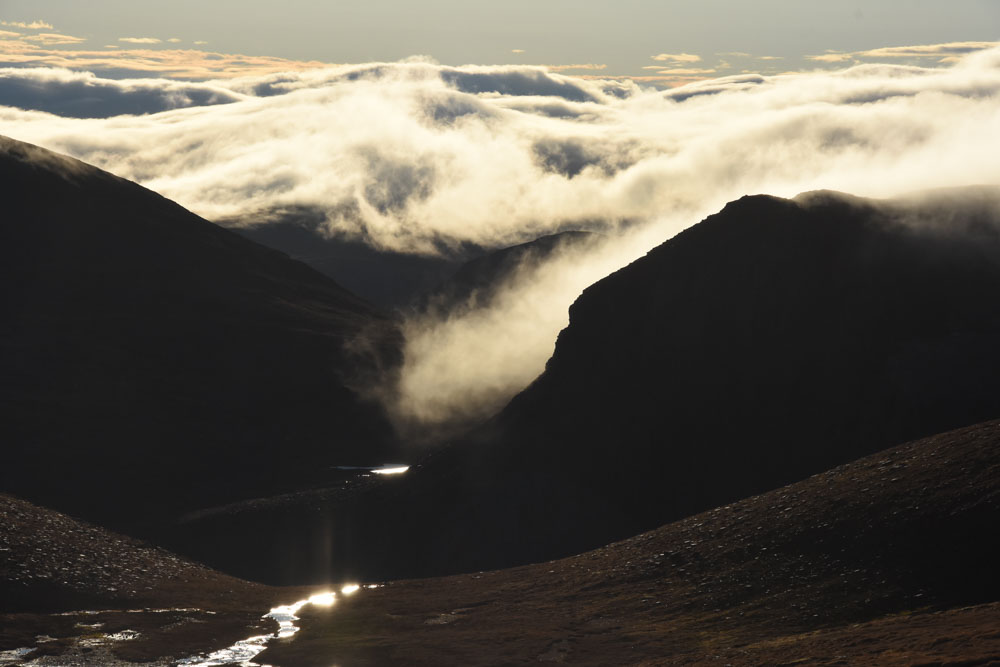 Headed off Cairn Lochain and south towards Ben Macdui which was also buried in mist. Passed the remains of an ex-ptarmigan. Wondered what had caught it – certainly heard a Peregrine on the way out but there are also a few Goldies in the area. 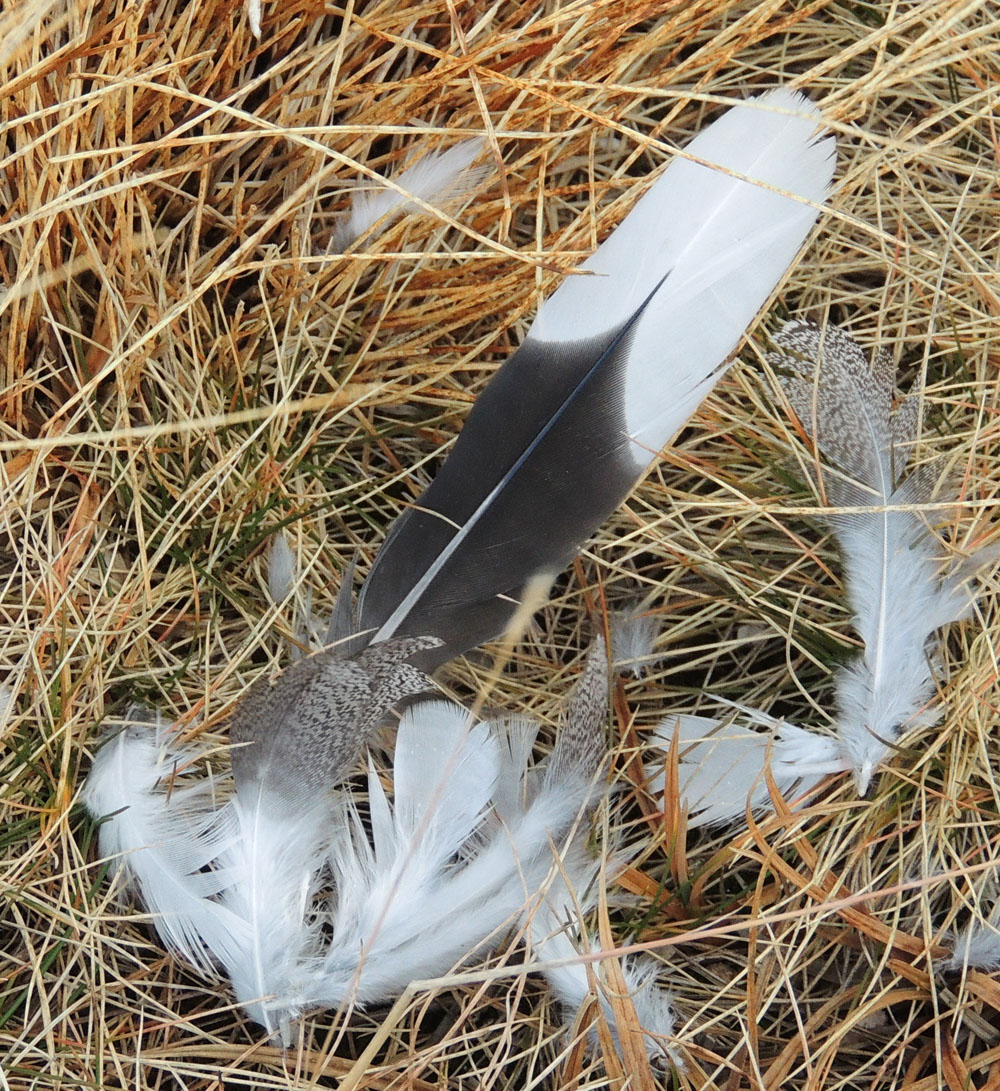 A couple of kilometres in mist and then the sun began to penetrate as we approached the summit of Ben MacDui.

A fogbow appeared as the mist peeled down of the summit. 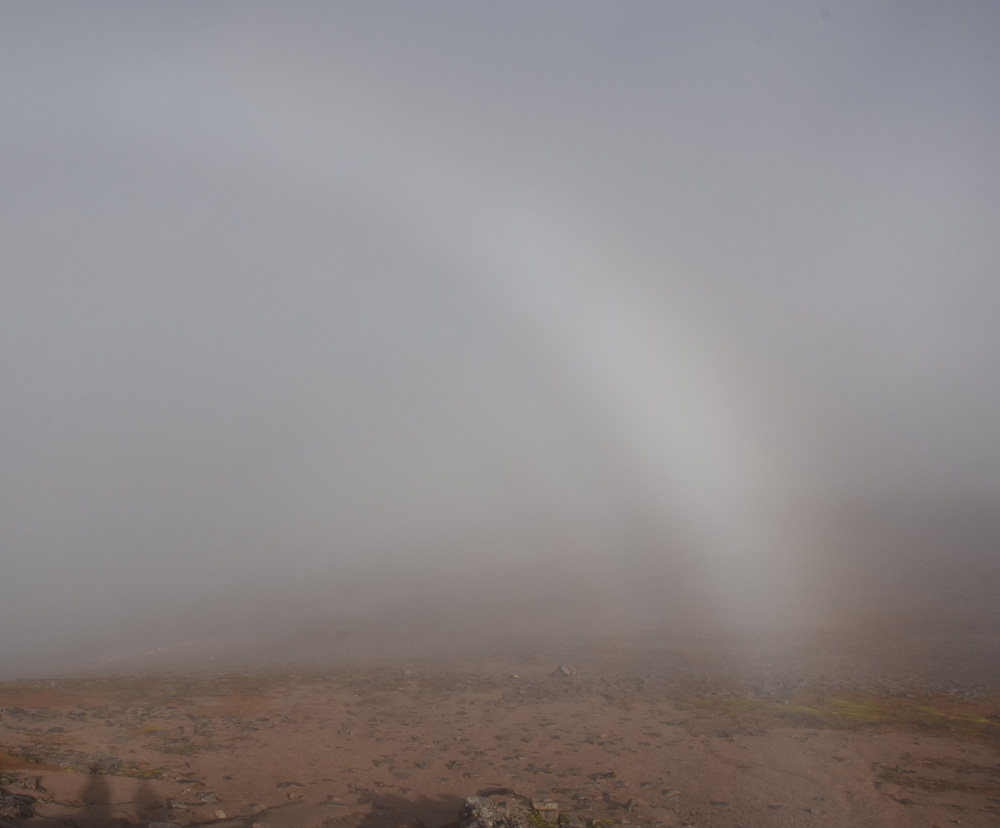 Sat on the south side of the summit and enjoyed the dramatic jigsaw views. 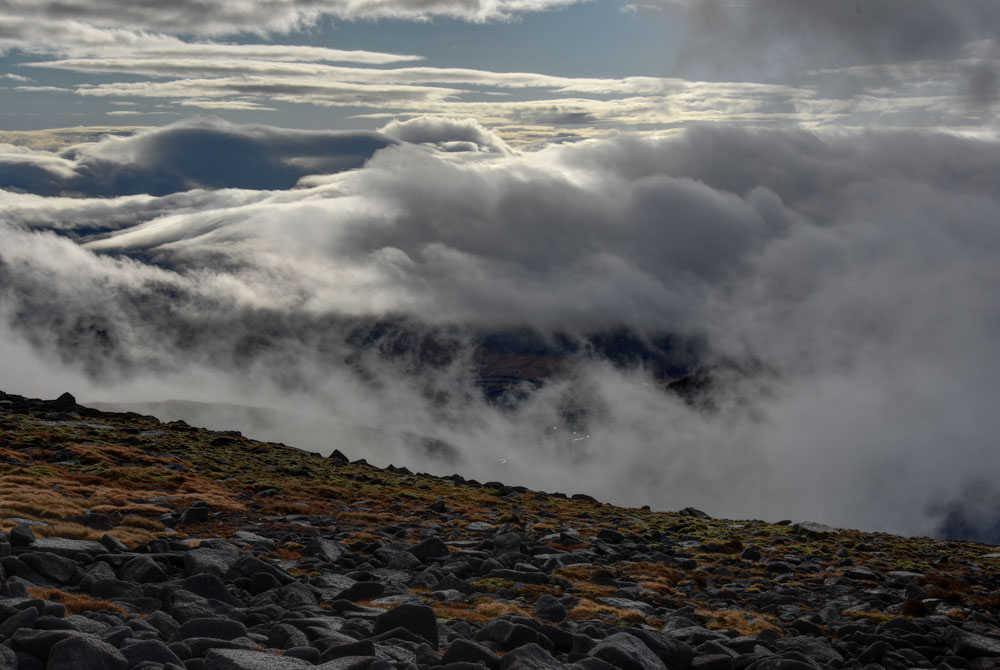 More than 30 visits to this summit, the views and atmosphere are ever-changing (except the claggy ones which have a sense of continuity).

Bod an Deamhain was only half visible, its head in the clouds.

Base of the Point: 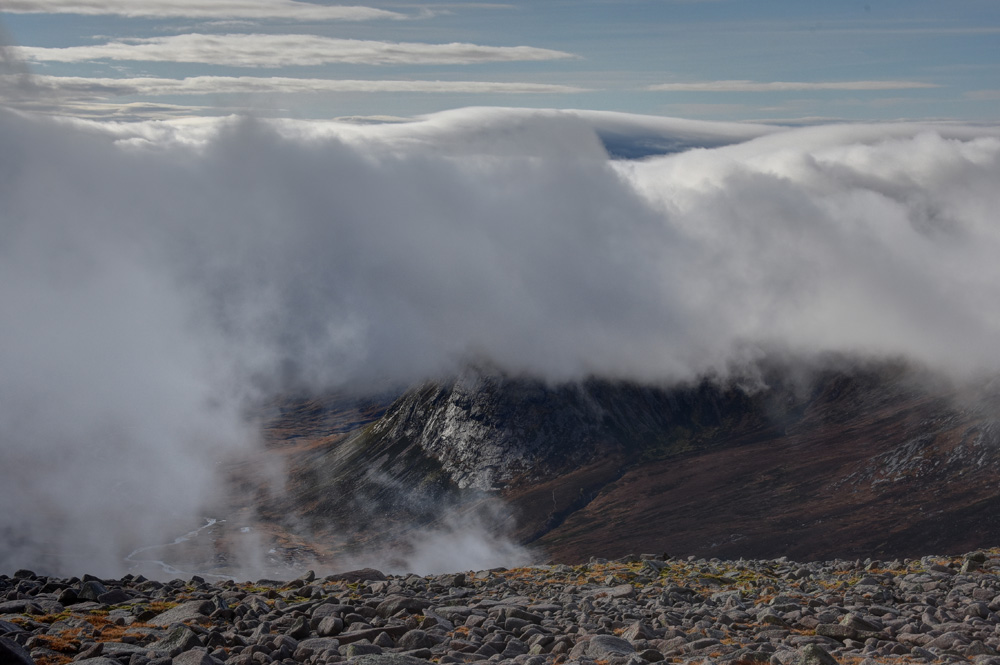 The south end of Lairig Ghru likewise only part visible. 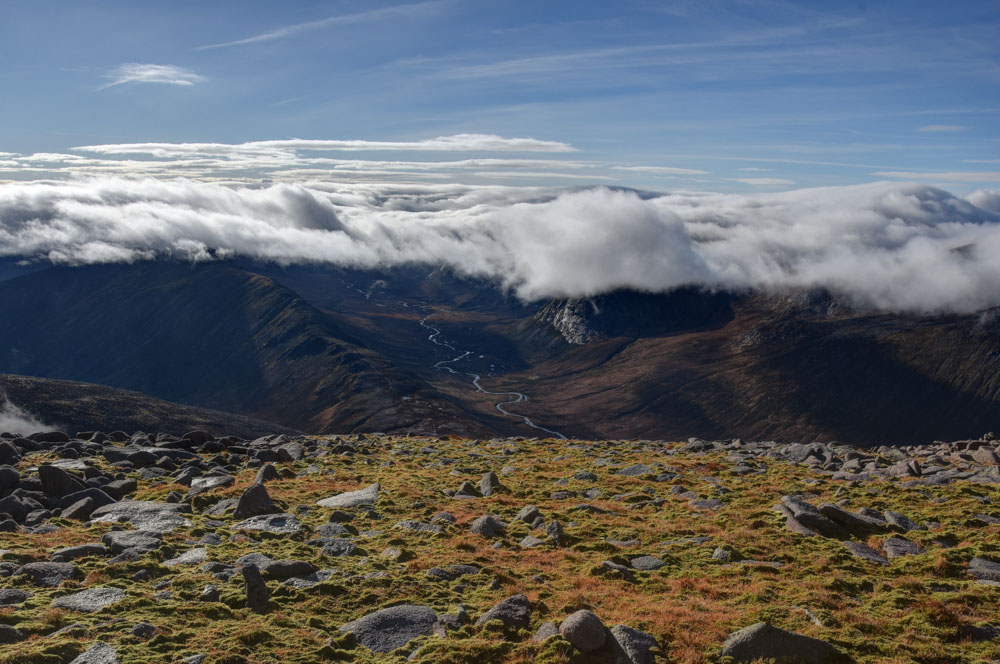 We wandered down towards Loch Etchachan, we had a time-limit on the day and so a loop over Beinn Mheadhoin would be too long, but we thought we’d visit the Munro Top Creagan a Choire Etchachan for its views of Loch Etchachan. 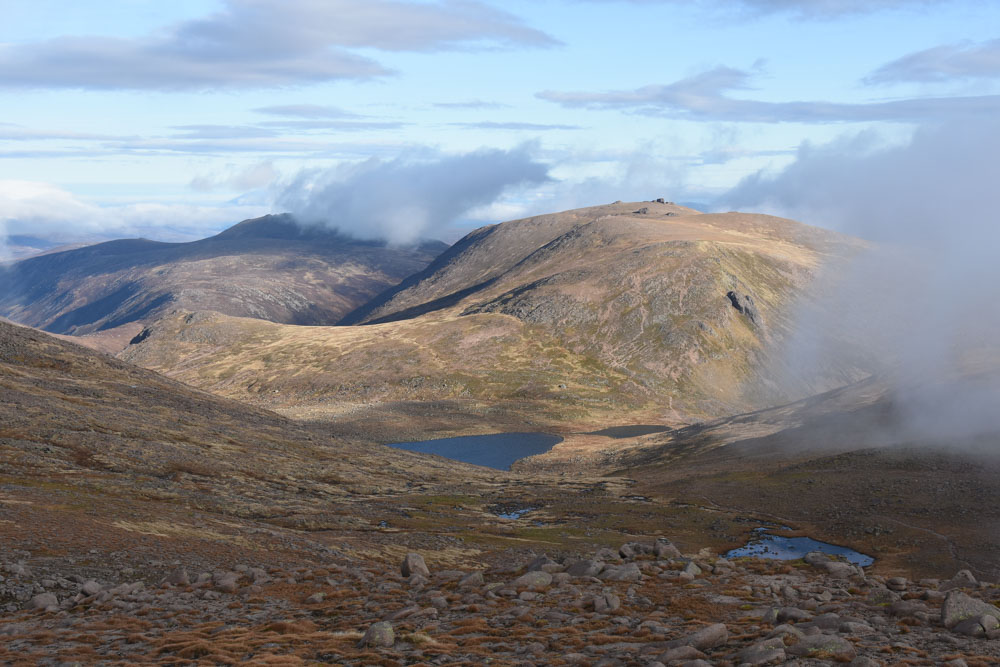 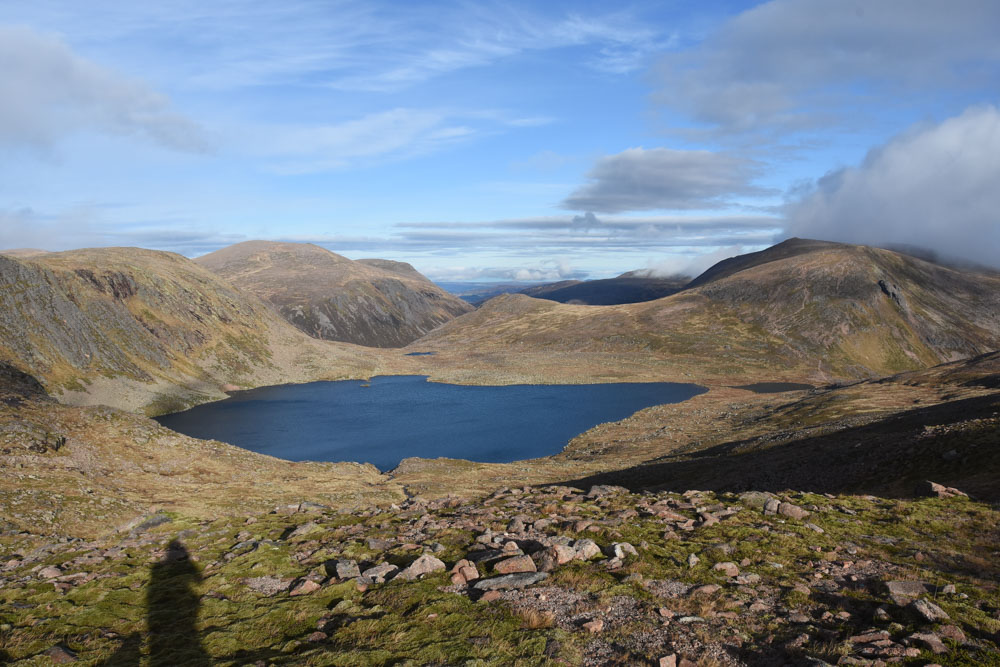 A group of ptarmigan crossed our paths – a group of this year’s youngsters I think. 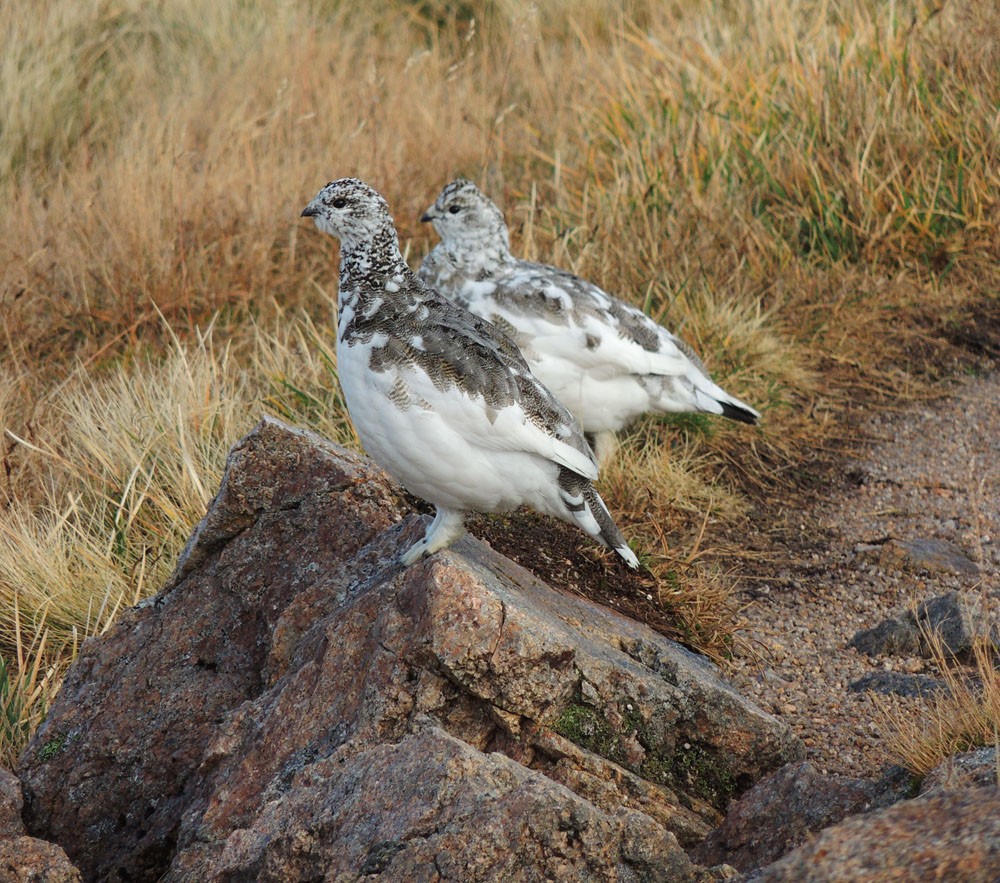 A minor ascent to Creagan a Choire Etchachan and then a quick break. 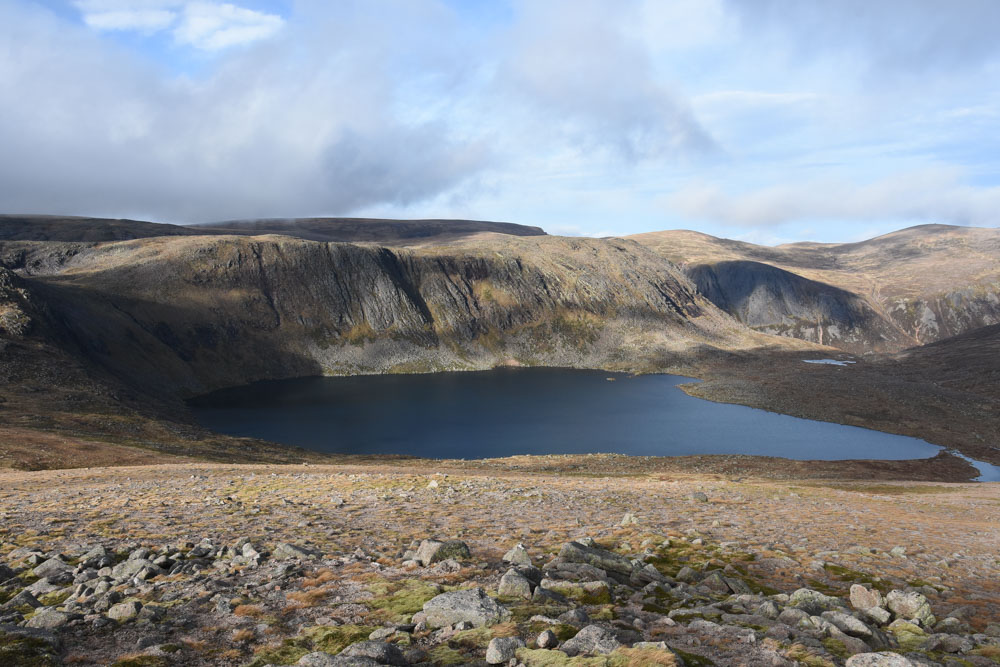 Our luck ran out as our return route was cloud-swamped for the next 90 minutes, returning via MacDui and then over the 1083m point to return to the car park.

The improving day forecast had not quite panned out – it had definitely been a better morning.

The clumps of autumn grasses are particularly eye-catching now – soon to fade and be flattened by snow. 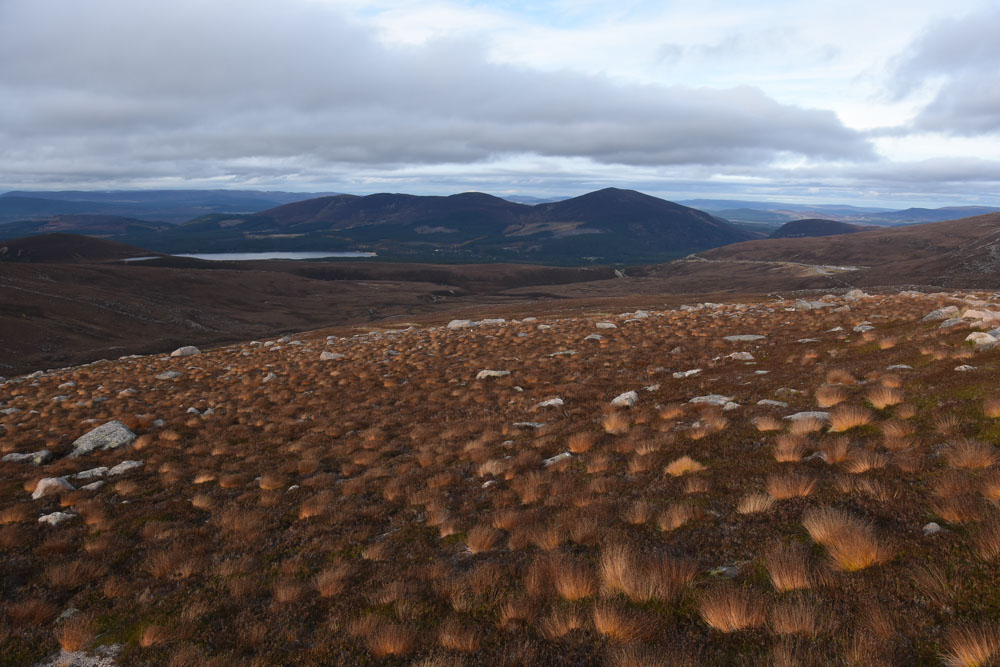 A lovely, atmospheric walk. Always nice to get a good pre-dawn wander, one of the advantages of approaching winter….if only the pesky clock change didn’t fiddle with it.