After 10 years of doing Trip Reports on Scottishills.com I stopped in 2017. By summer 2017 I realised that the TRs had been a great diary of the better walks we’d done and worthwhile so I restarted writing reports. Almost 2 years on and I thought I should backfill the gap (albeit based on less sharp memories of the individual days).

Kicked off at the Cairngorm car park – attractive parking attendants were out and about. 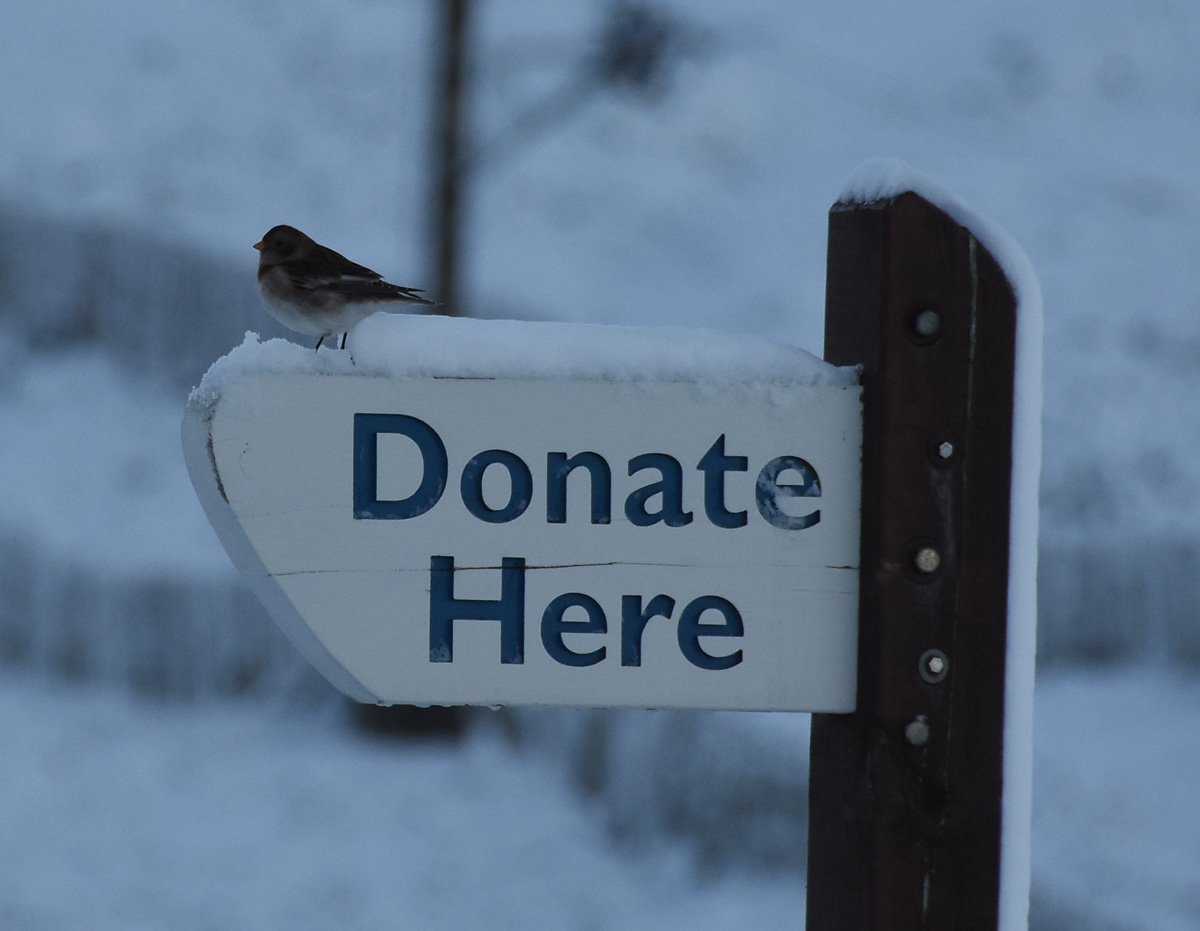 We started a little before dawn – the sunlight rolled over the hills to the north. Crossing the Northern Corries in winter can vary from a slog through deep unconsolidated snow to a marvellous wander on hard packed layers. On this occasion a few inches of unconsolidated snow did not impeded progress. 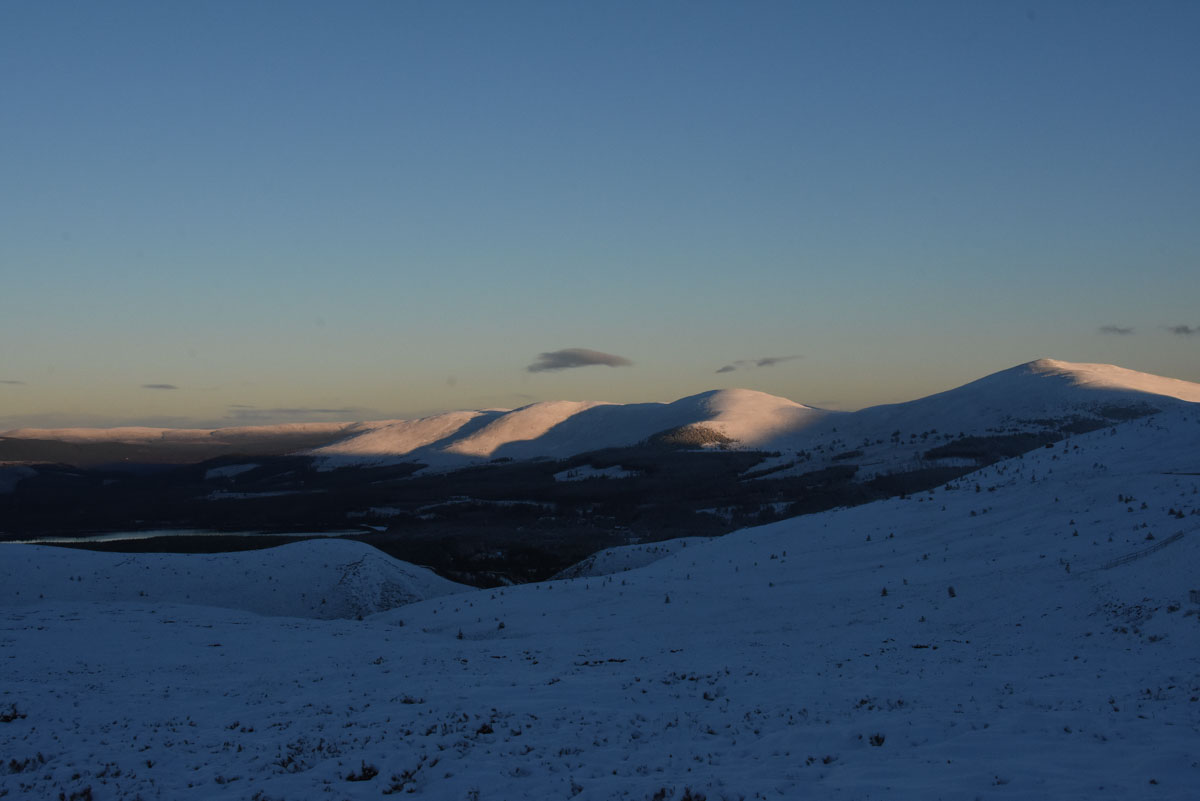 To the north Ben Rinnes was nicely snow-clad. 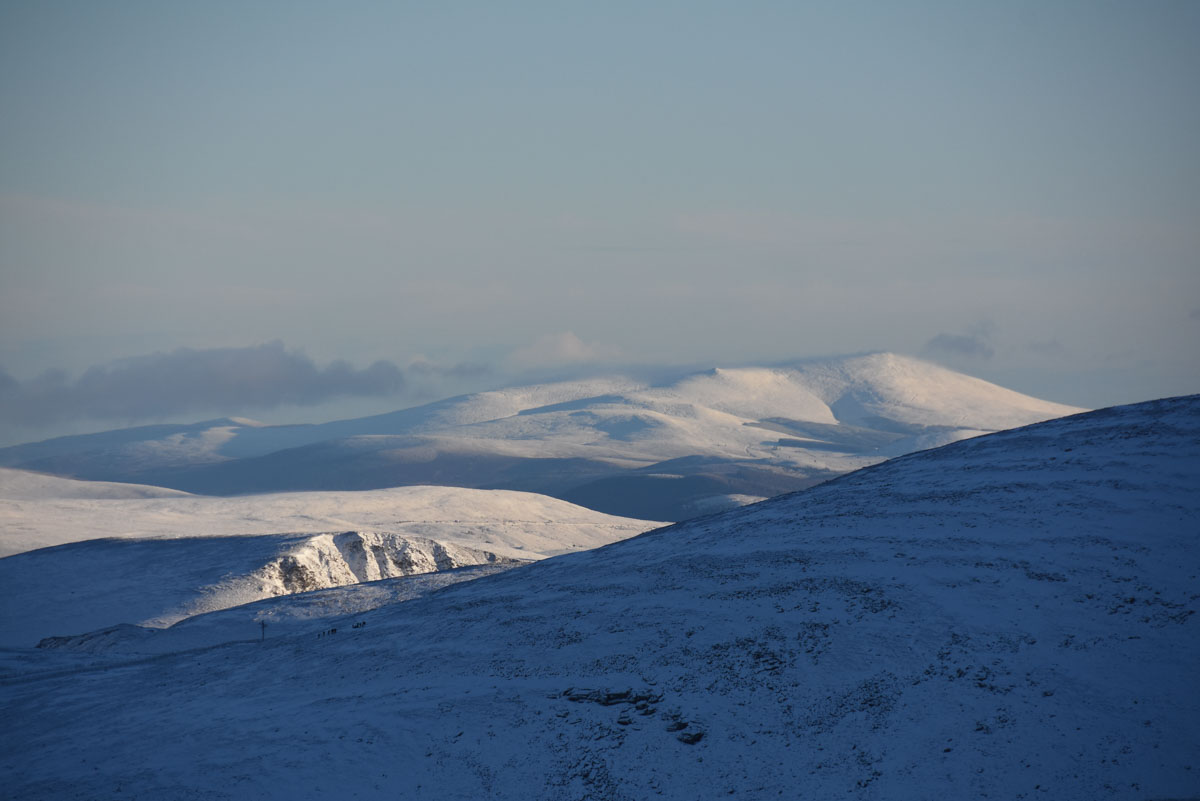 Behind us groups on winter skills courses were heading uphill, and the ski car park was the destination for a stream of incoming headlights. 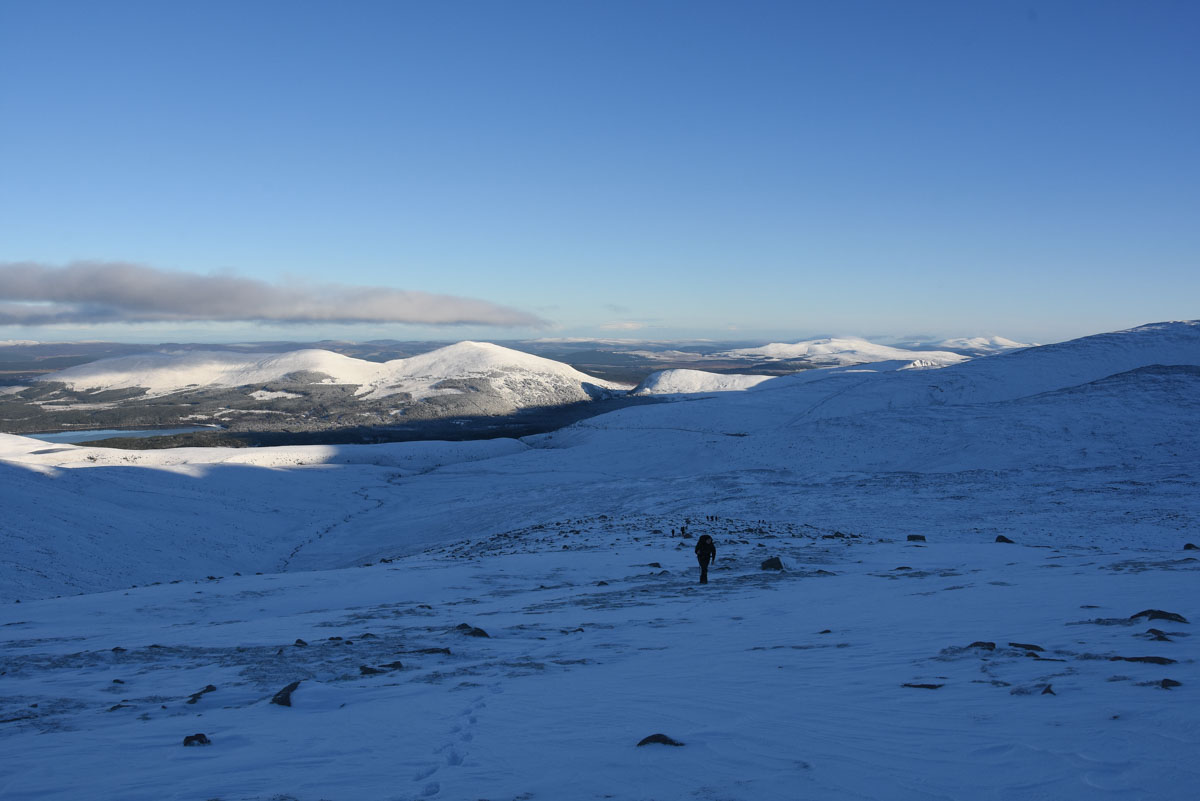 Heading uphill in winter it’s always nice to break into the sunlight, even in deep winter you can just feel the warmth. 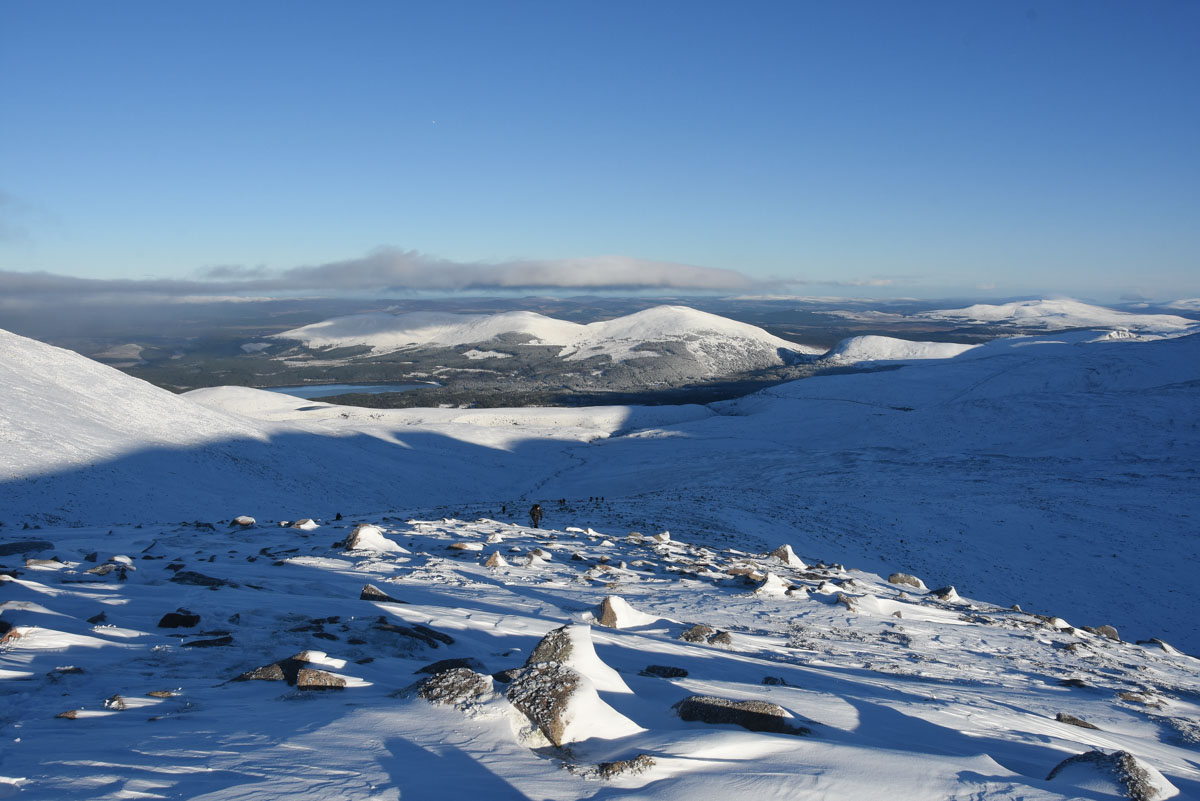 Ahead there was a not uncommon sight of cloud pushing over from the south across the Plateau. 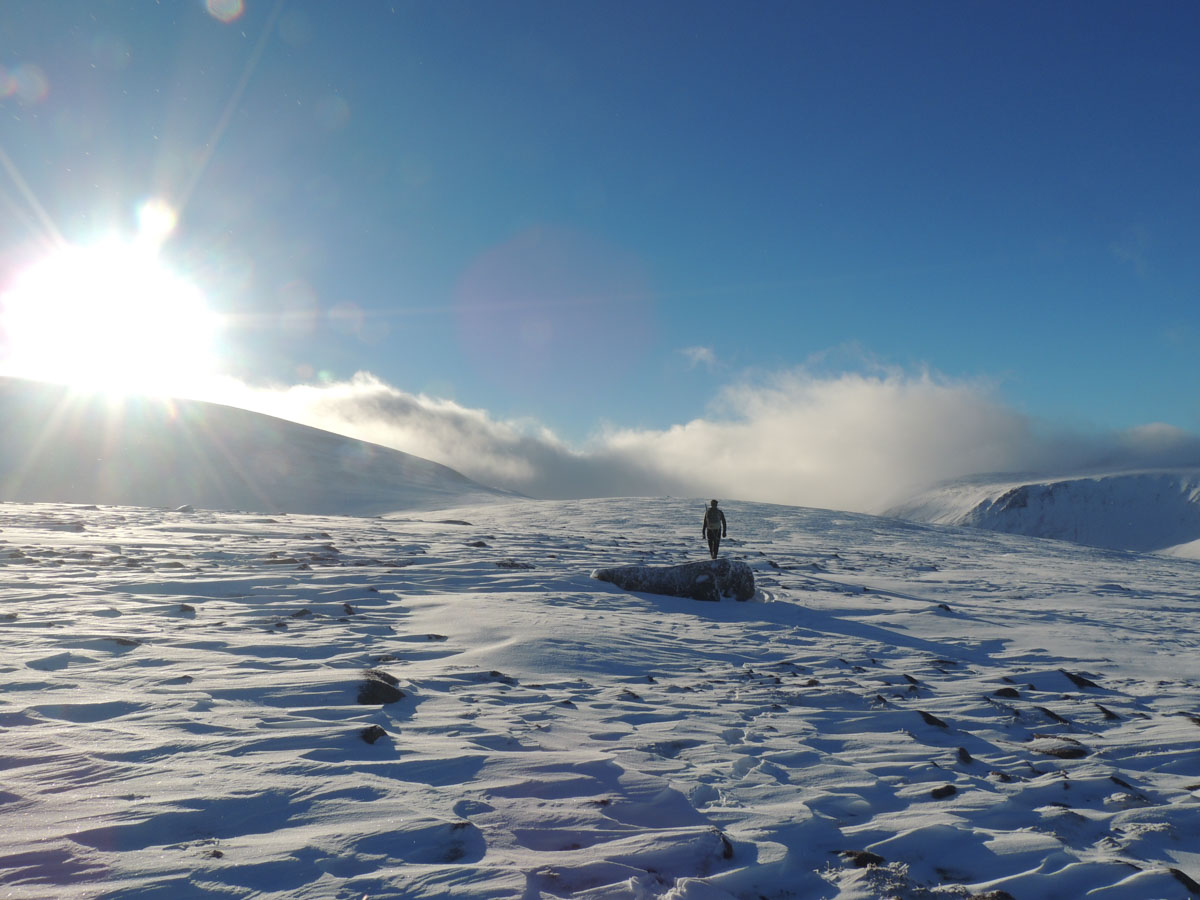 Crossed over the 1083m top and then headed on along the west flank of Cairn Lochan – this had us heading into the cold mist. 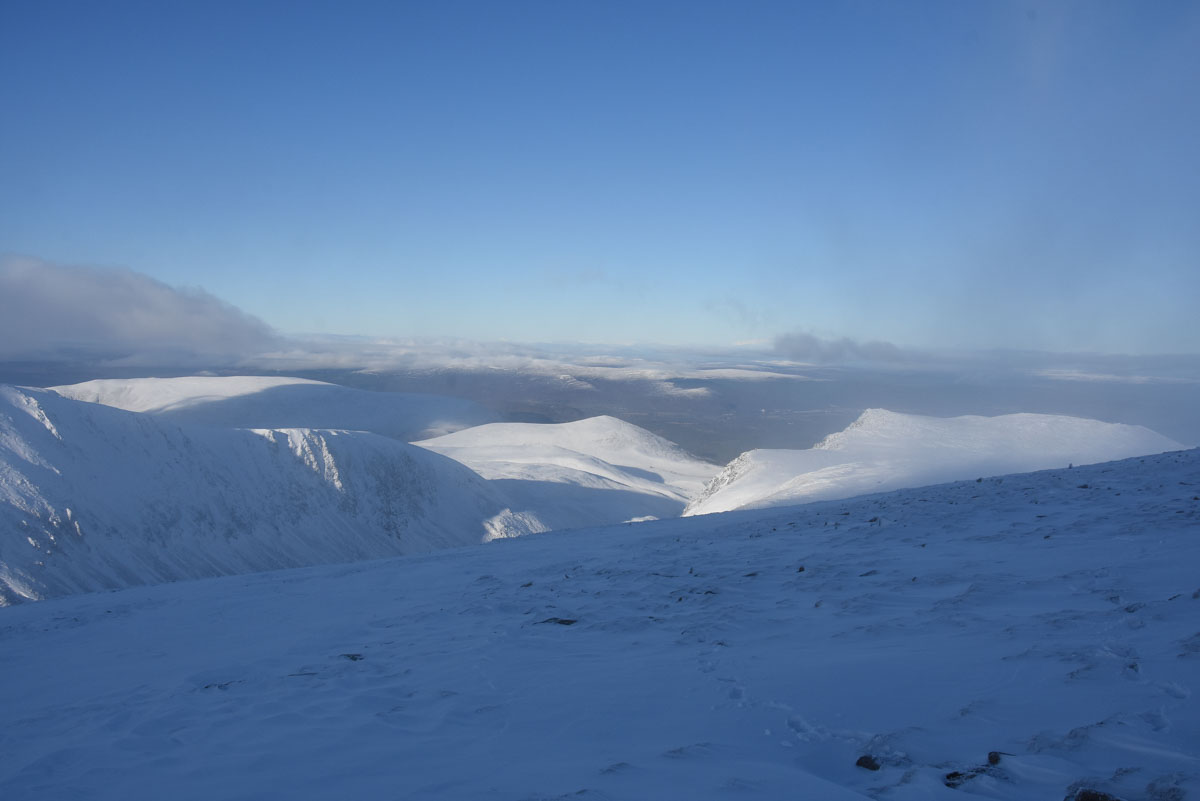 We were heading into the mist stream to Macdui, hoping it might break up, as we curled round Cairn Lochan the Plateau to the SE looked a lot clearer. 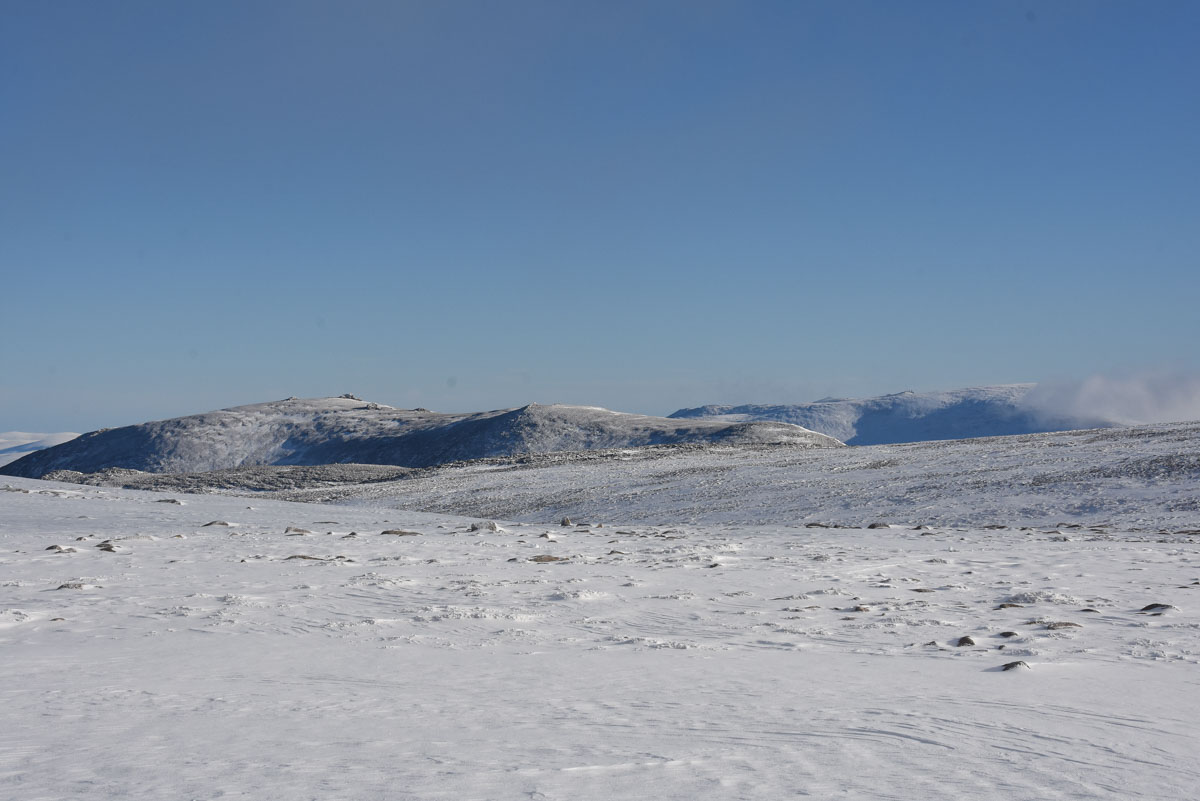 Headed into the mist and it was an atmospheric walk to Ben Macdui, cold enough that hoar frost was forming on clothes and hair. A nice wee wander, but not much to photograph. Had a bite to eat at the summit and then wandered back towards Cairn Lochan.

As we approached Cairn Lochan we broke back out of the mist and had views again – Braeriach was sitting out of the cloud on the other side of the Lairig Ghru. 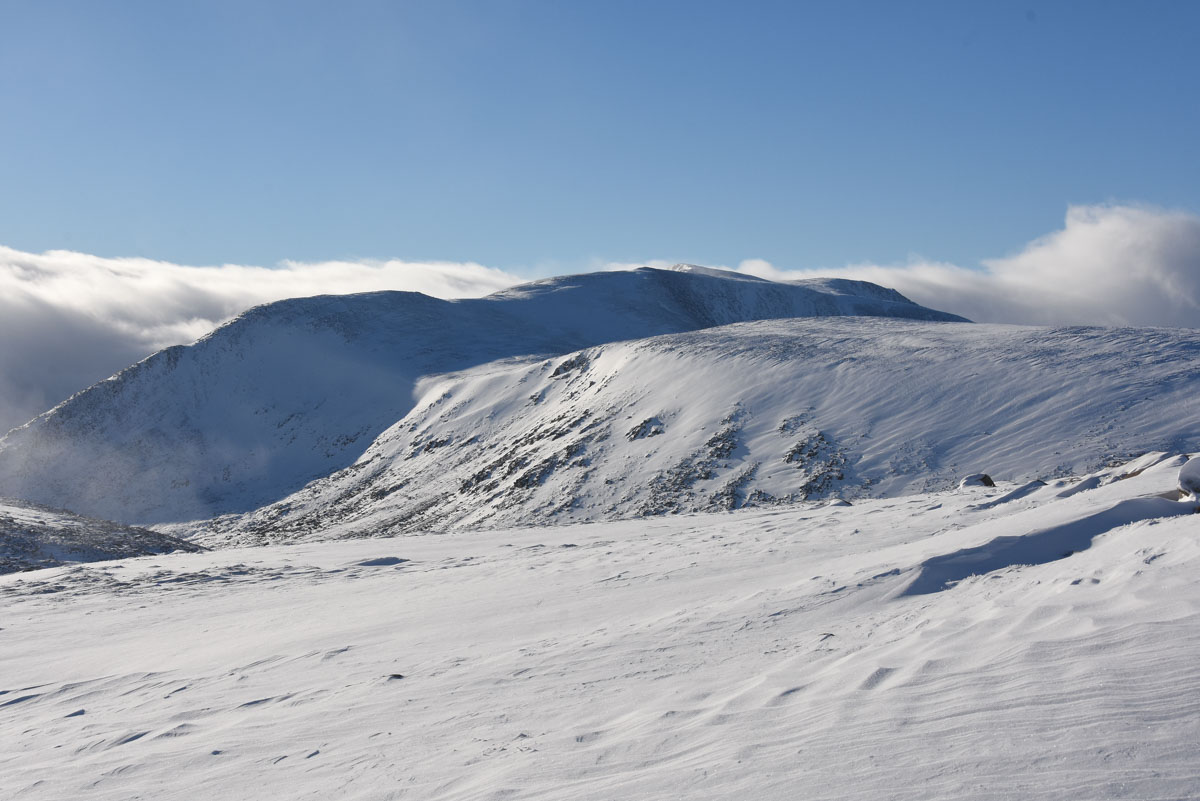 Cairn Toul was not visible, but Sgor an Lochain Uaine was just visible snuggled under its cloud duvet. 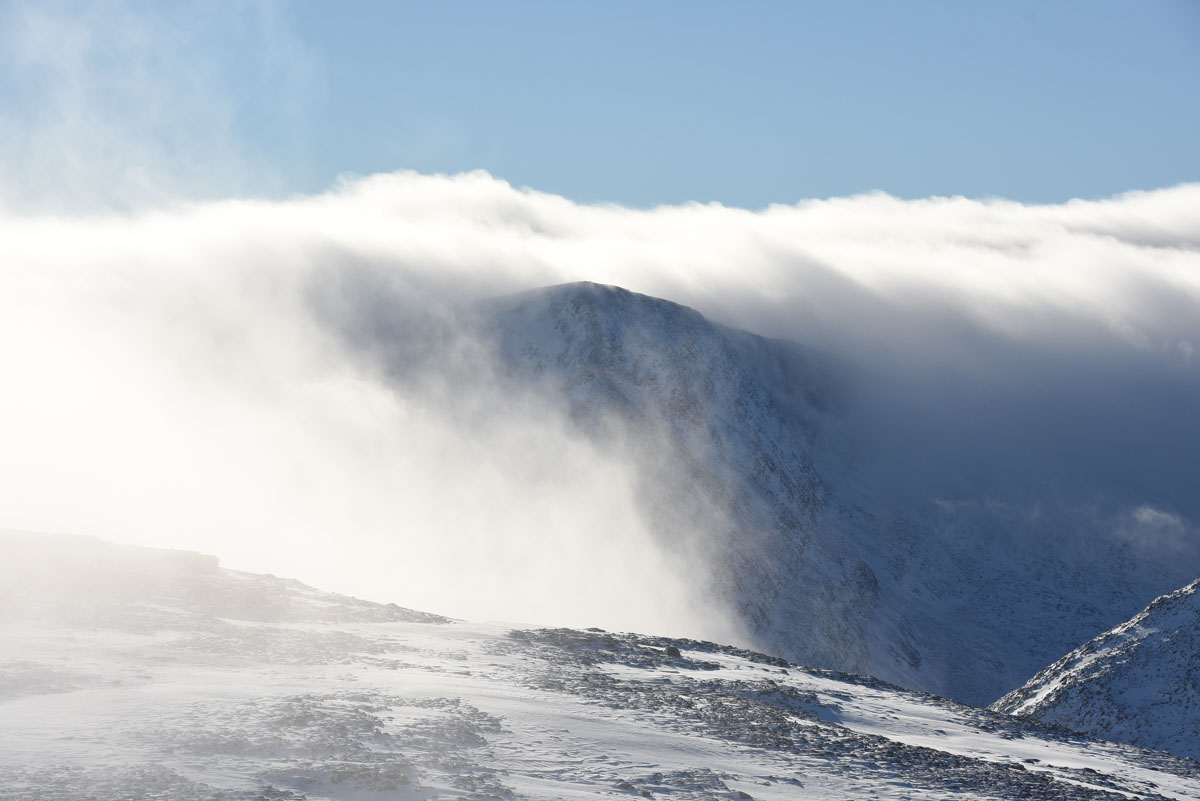 Carried on up Cairn Lochan a little and Cain Toul emerged as well. 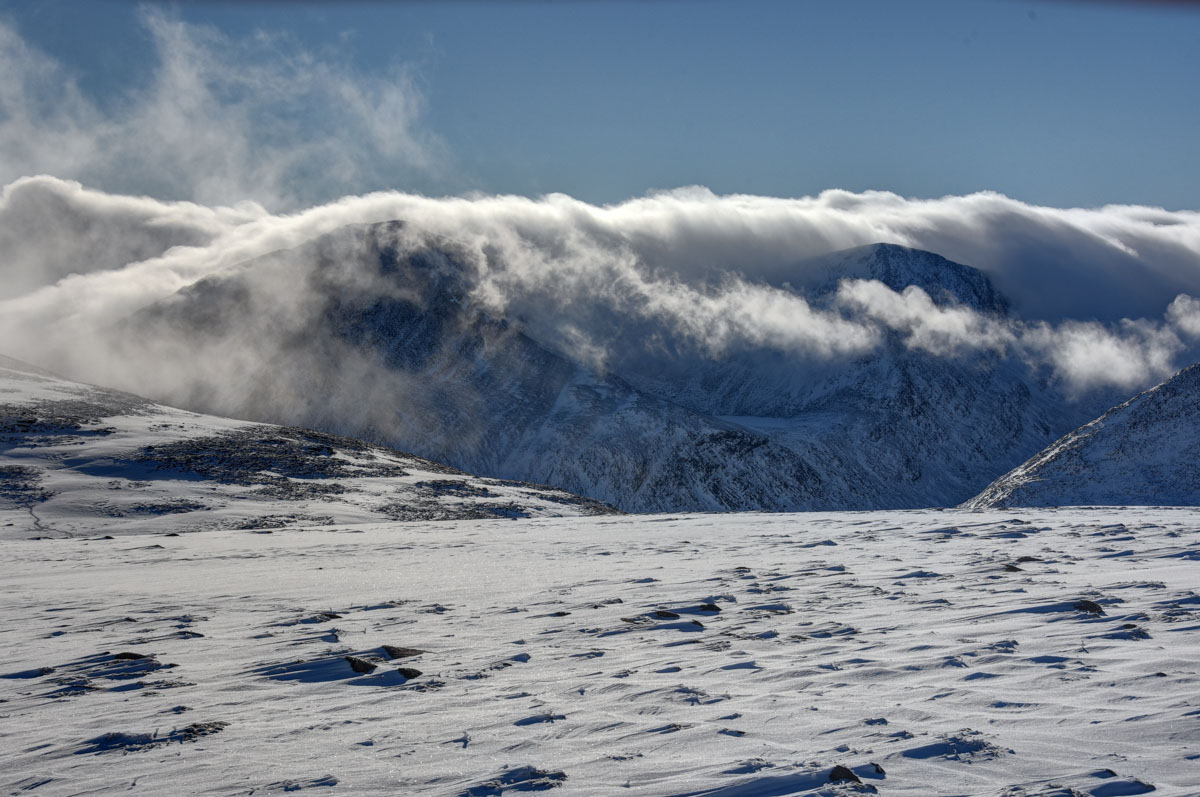 Headed up across the top of Cairn Lochan and enjoyed the sunshine, parky in the breeze. 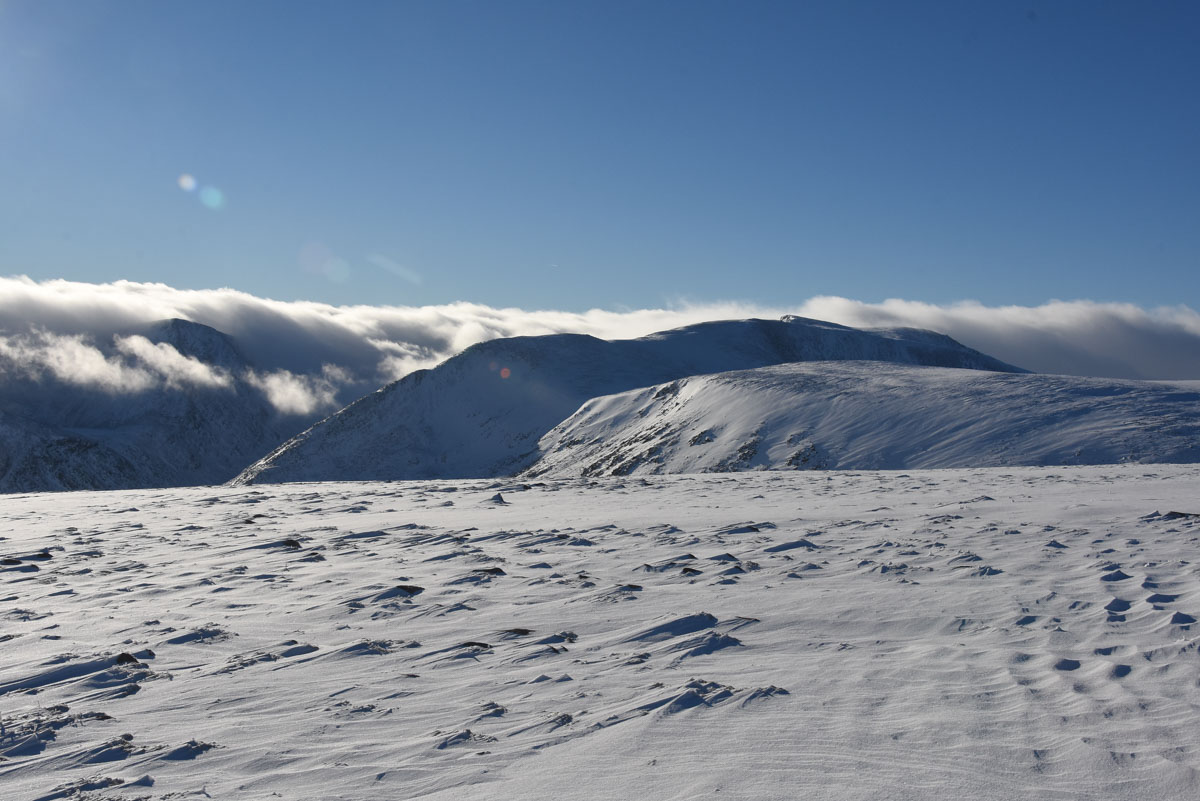 Dropped back down towards the 1083m top and then back down into the Northern Corries to return to the car. 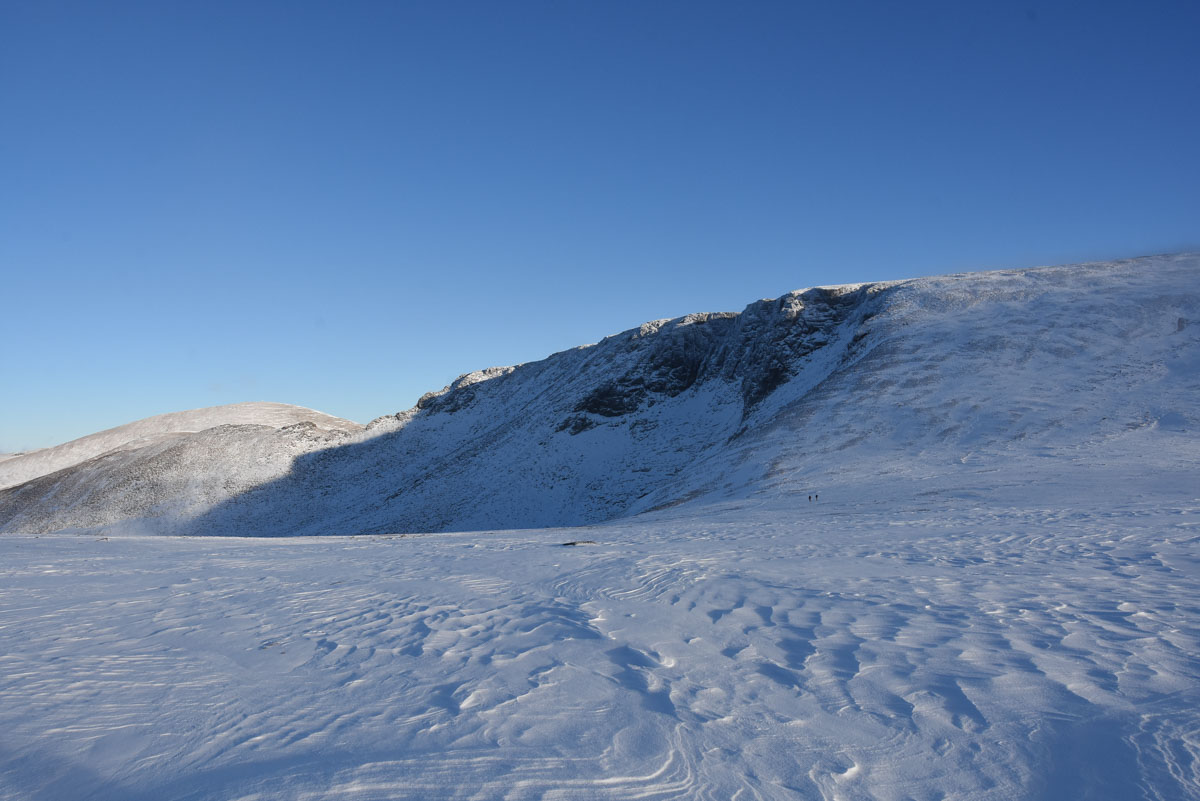 A pleasant Sunday stroll – always nice to get up on the Plateau in its winter coat.