The weekend hadn’t looked very hopeful, with the approach of Storm Brian, but forecasts a few days out were suggesting the far NW might have some decent conditions. The mountain forecasts still weren’t great on Friday night, but NW still looked best.

This in mind we headed out on Saturday morning still unsure of what to climb. As we headed up the A835 we were still considering routes in Assynt and in the Beinn Dearg group.

When push came to shove we headed out the Dundonnell road, past a still shrouded An Teallach to park at Badrallach, at the end of the public road.

Although An Teallach had a hat, the Corbett Sail Mhor across little Loch Broom was clear giving us a degree of optimism for the day.

Set out along the good track to Scoraig, a few breaks in the cloud meaning patches of sun were lighting Sail Mhor. 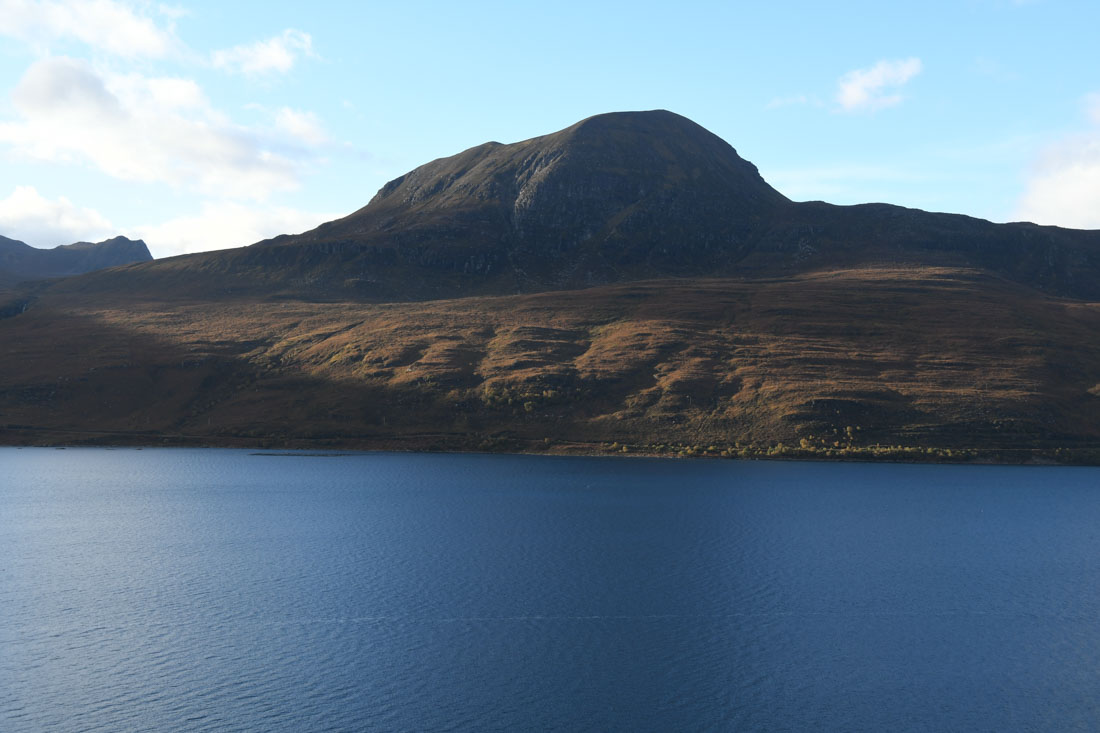 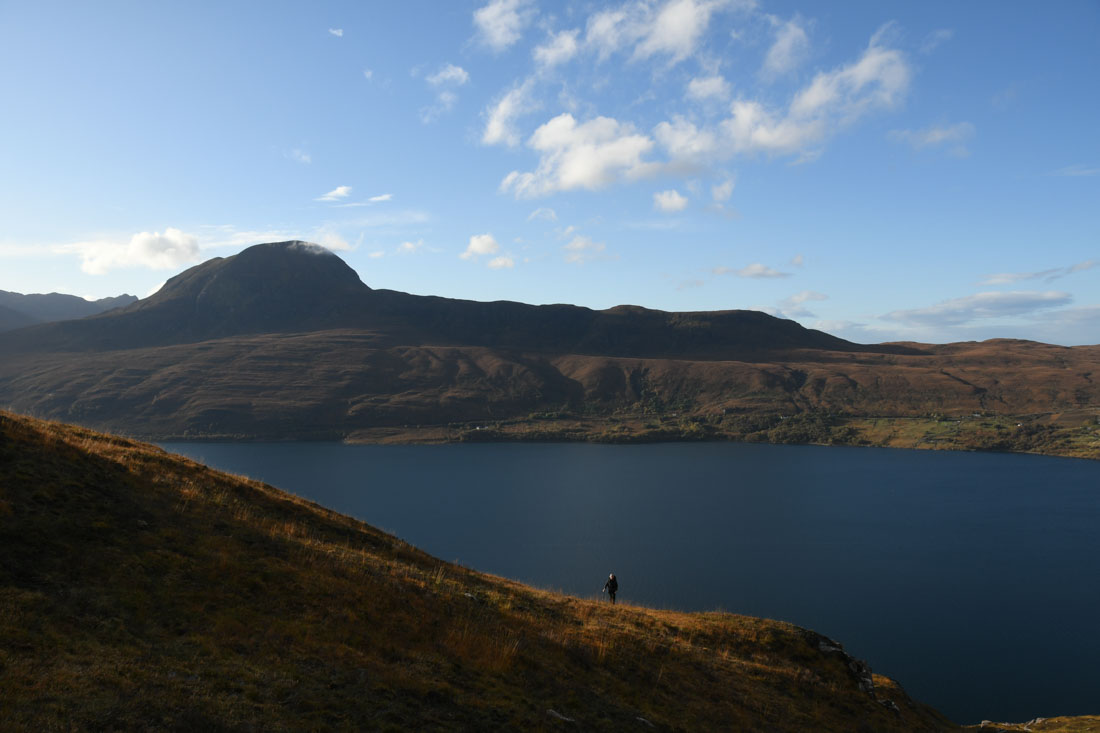 Once on the ridgeline there’s a view to Loch na Coireag and Beinn Ghobhlach. 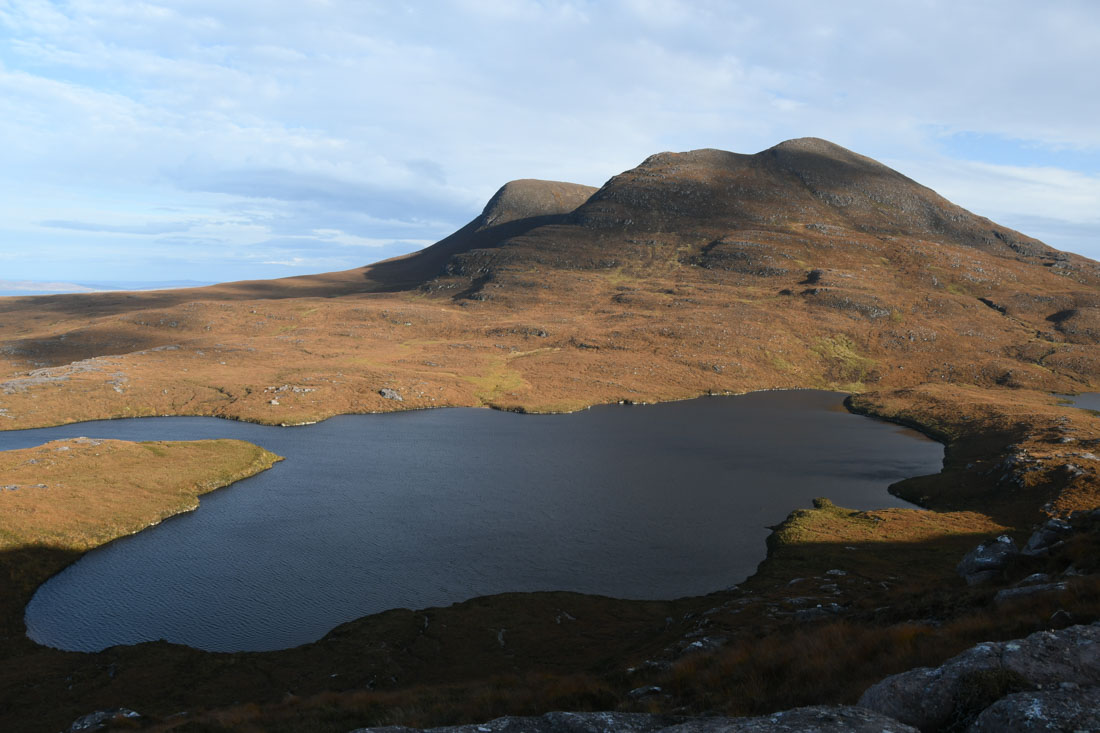 The view out across the Minch, with Lewis visible in the distance is open. 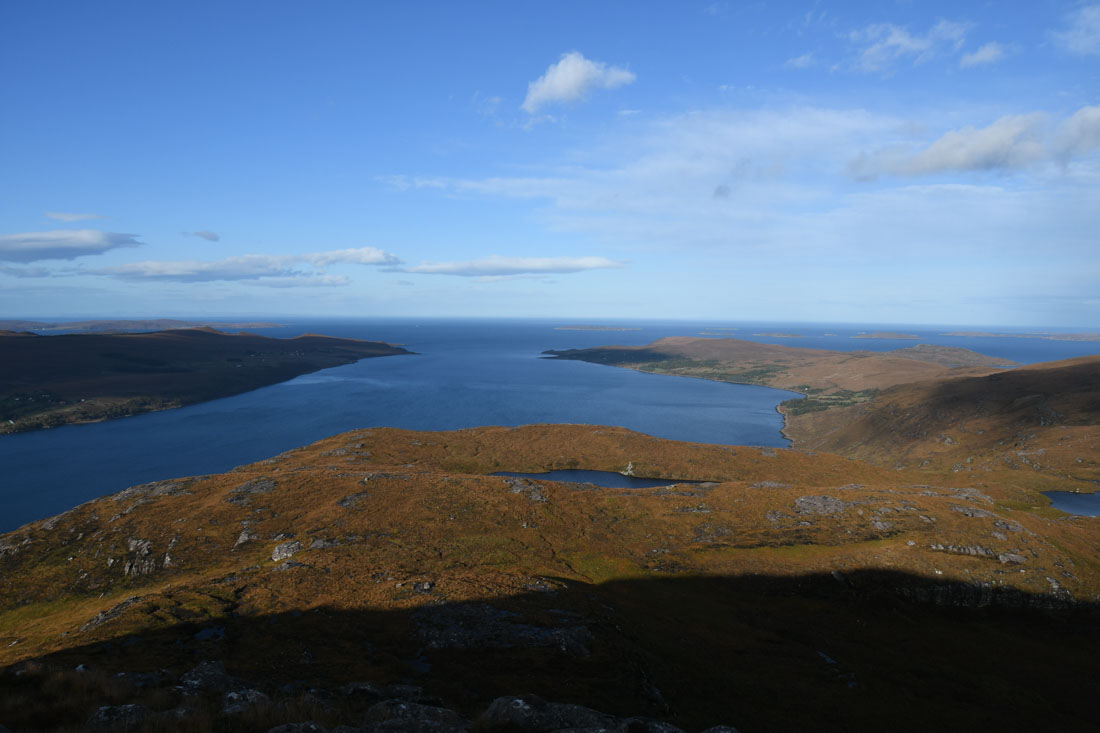 Beinn Ghobhlach can be ascended directly, but we preferred to ascend the ridge east, which has great views down to, and across Little Loch Broom. This culminates in the Marilyn Cnoc a Bhaid-rallaich.

The ridge is fairly bobbly, the terrain a bit harder work than it looks on the map.

As we ascended the MV Loch Seaforth appeared, heading out to Stornoway from Ullapool: 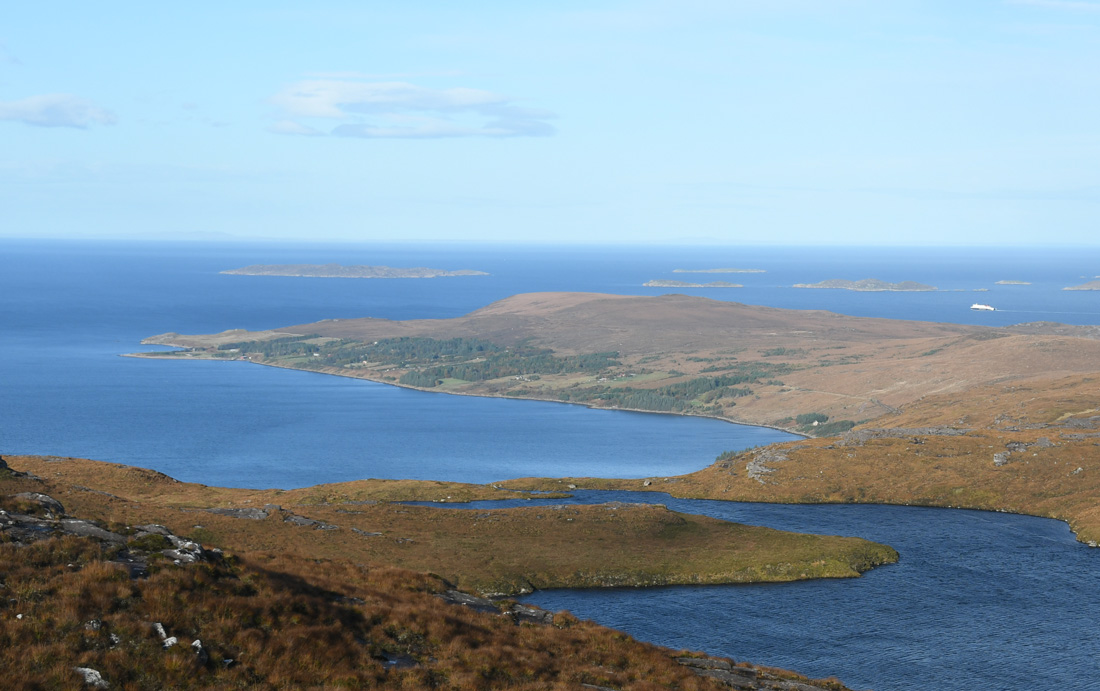 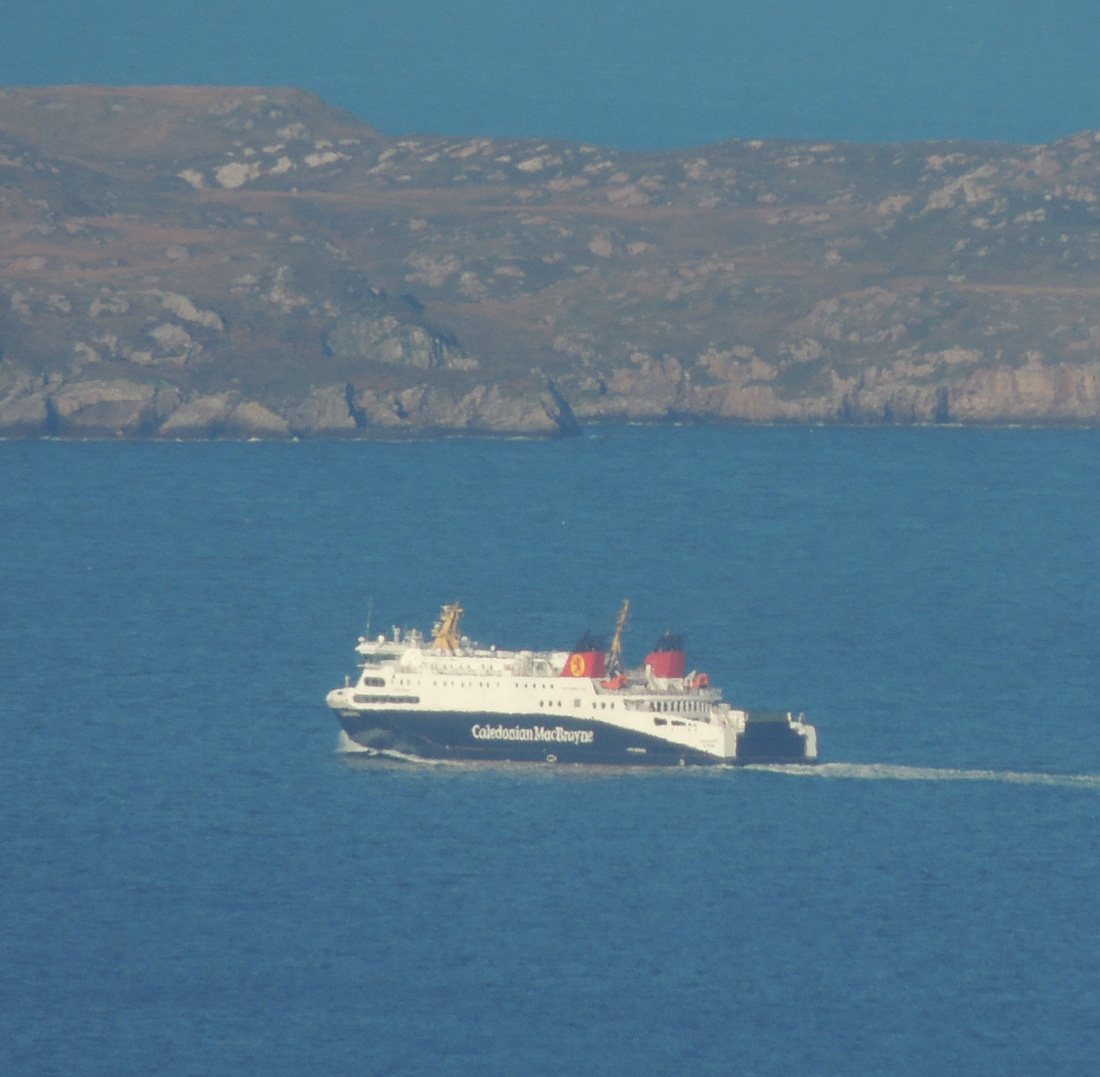 The ridgeline is peppered with little lochans. 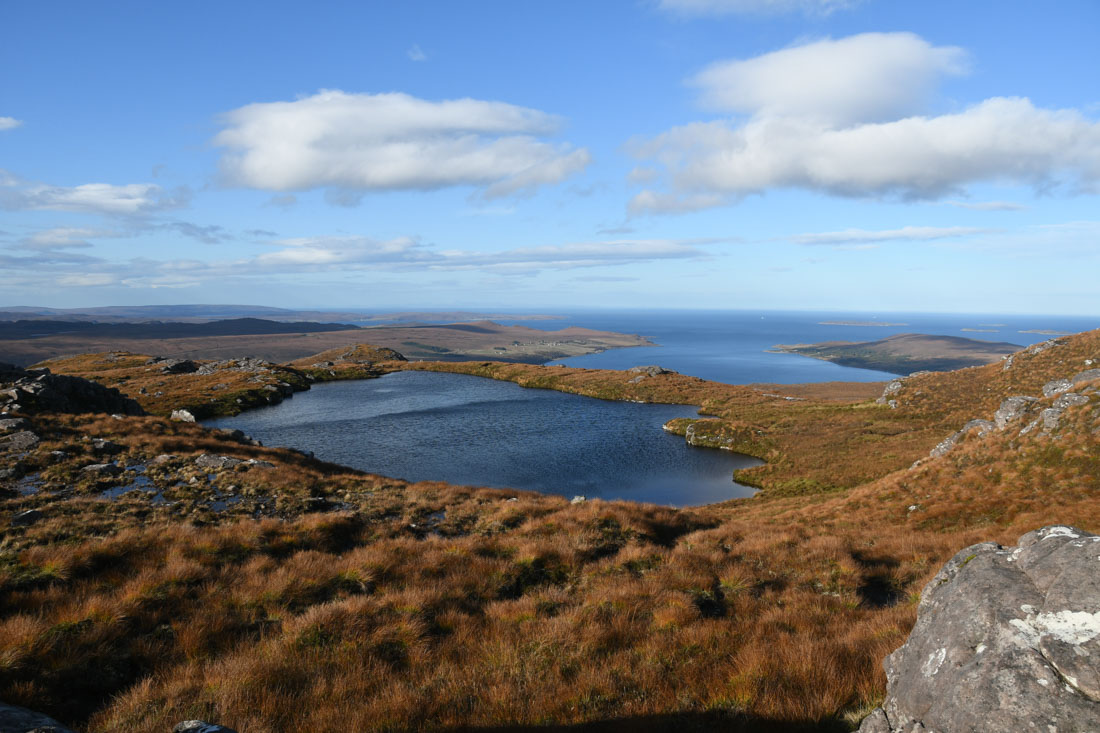 The light conditions weren’t the best to photograph the view across Little loch Broom – always rather a high dynamic range.

The view of An Teallach, Sail Mhor and Fisherfield beyond was still eye-catching however. 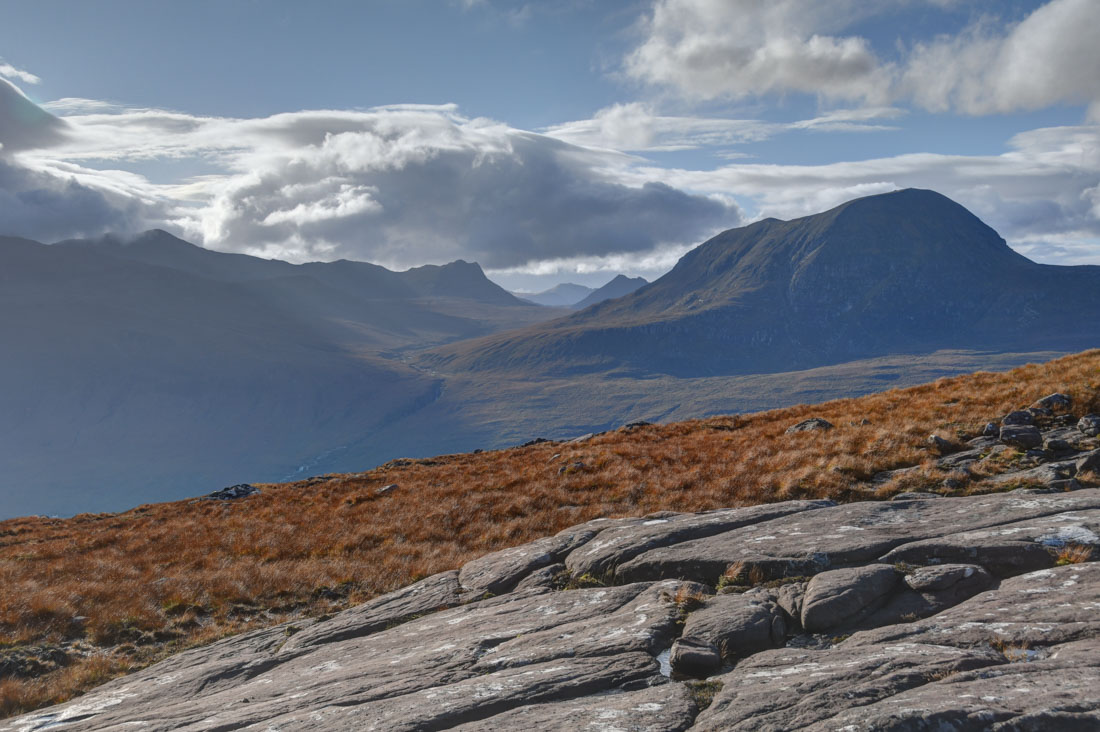 Eventually, once the 500m mark is reached, the view north towards Coigach opens up. Ben More Coigach appears as a huge wall: 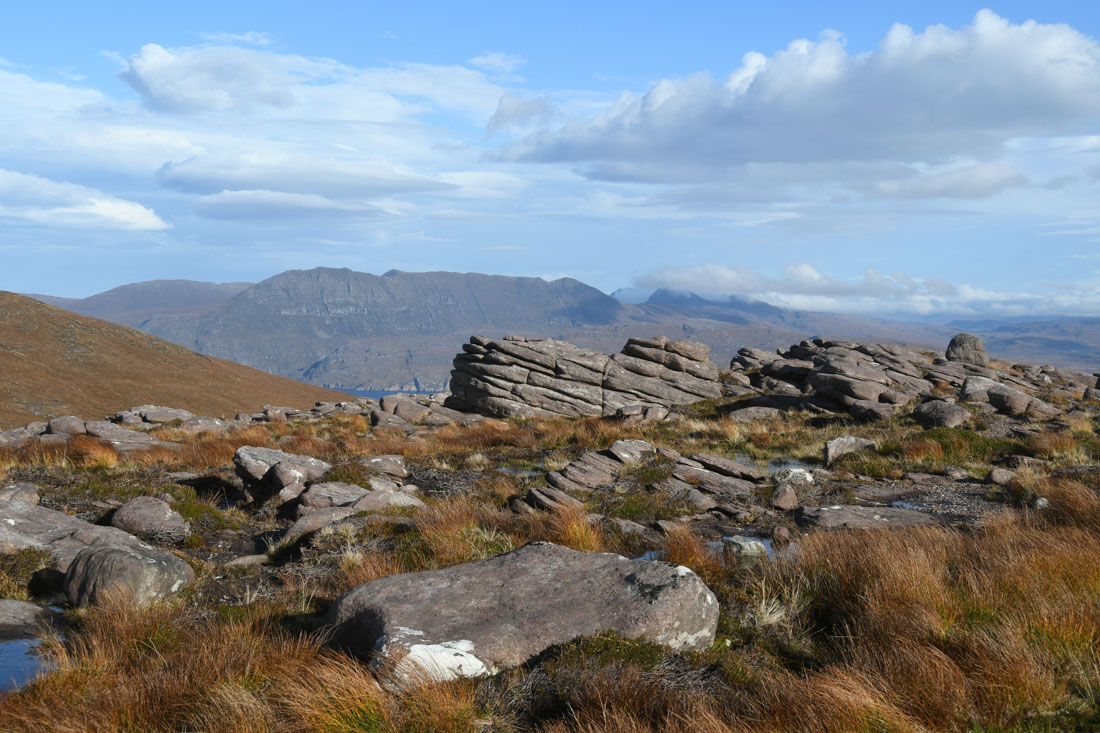 Cul Beag and Cul Mor appeared to have persistent hats, we were glad not to have ventured further north. 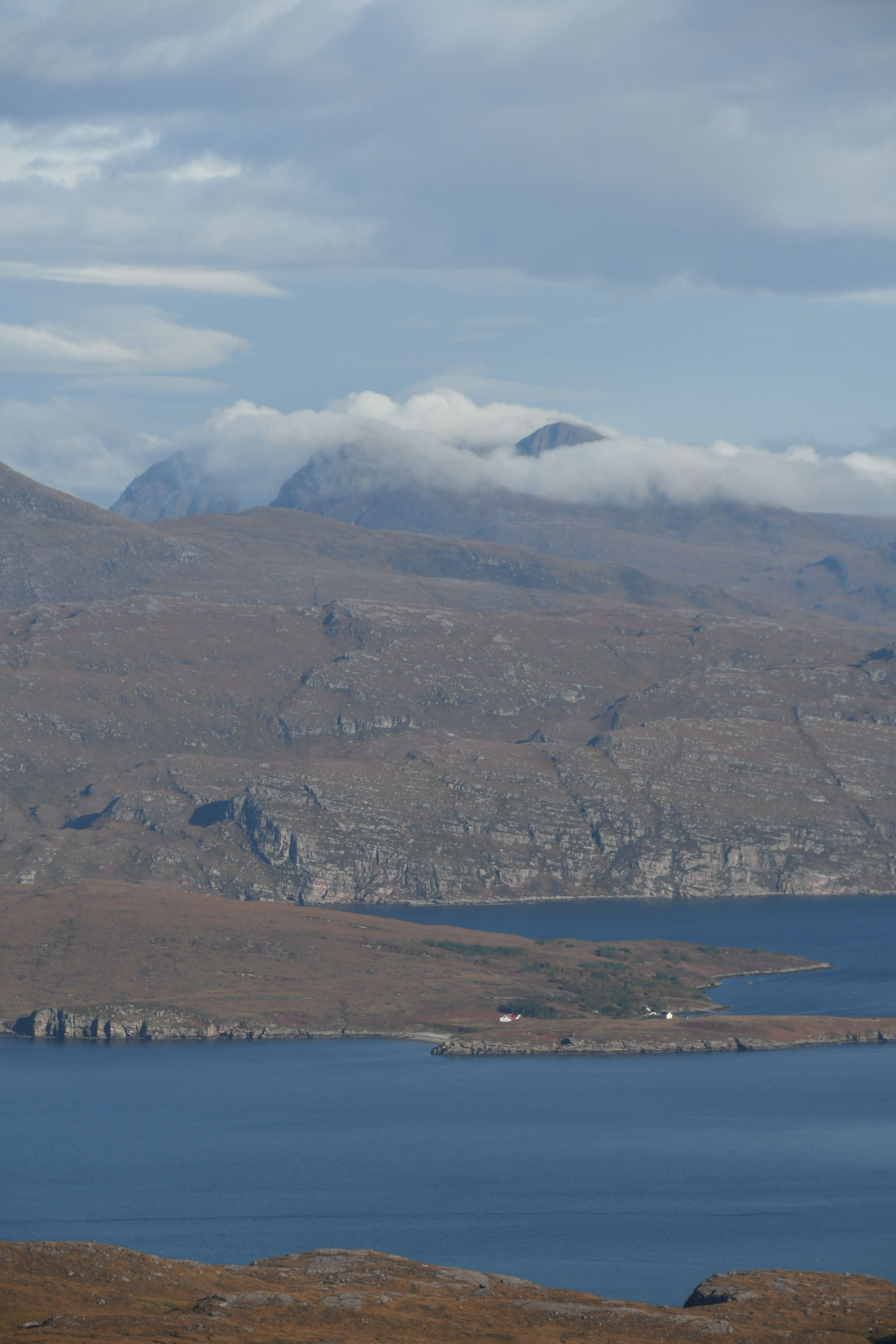 Watched a Golden Eagle stooping and climbing to our east for a few minutes.

Onward to the summit of Cnoc a Bhaid-rallaich – this is a fine wee viewpoint in its own right, better in terms of An Teallach (on the right day) than Ghobhlach.

We sat and had a bite of lunch and enjoyed the views. 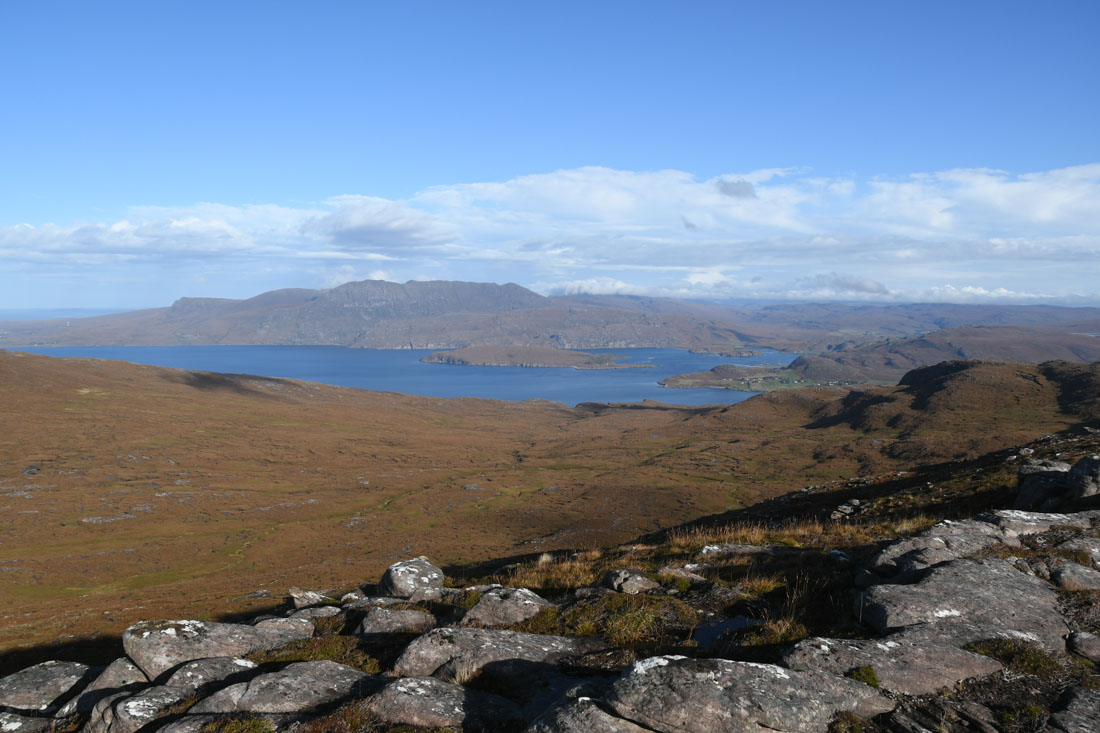 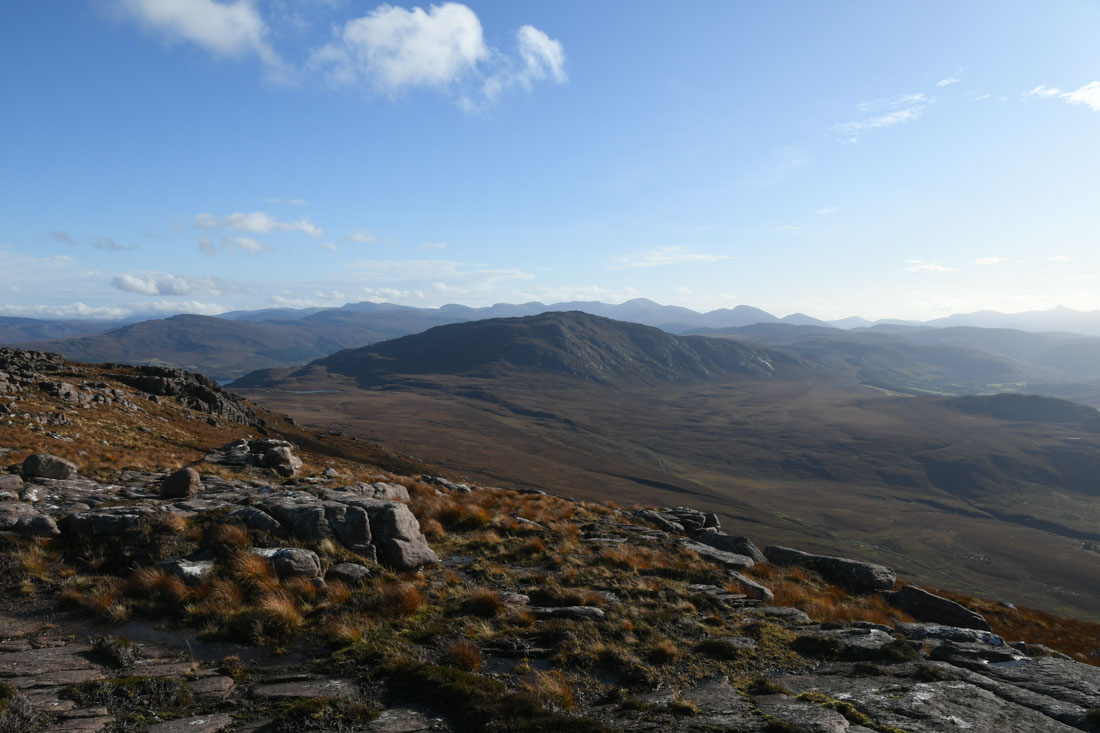 Returned west a few hundred metres from the summit and descended north to Loch a Bhealaich before heading up the 270m climb to the Graham summit.

An Teallach had cleared, but into the low sun was harder to appreciate: 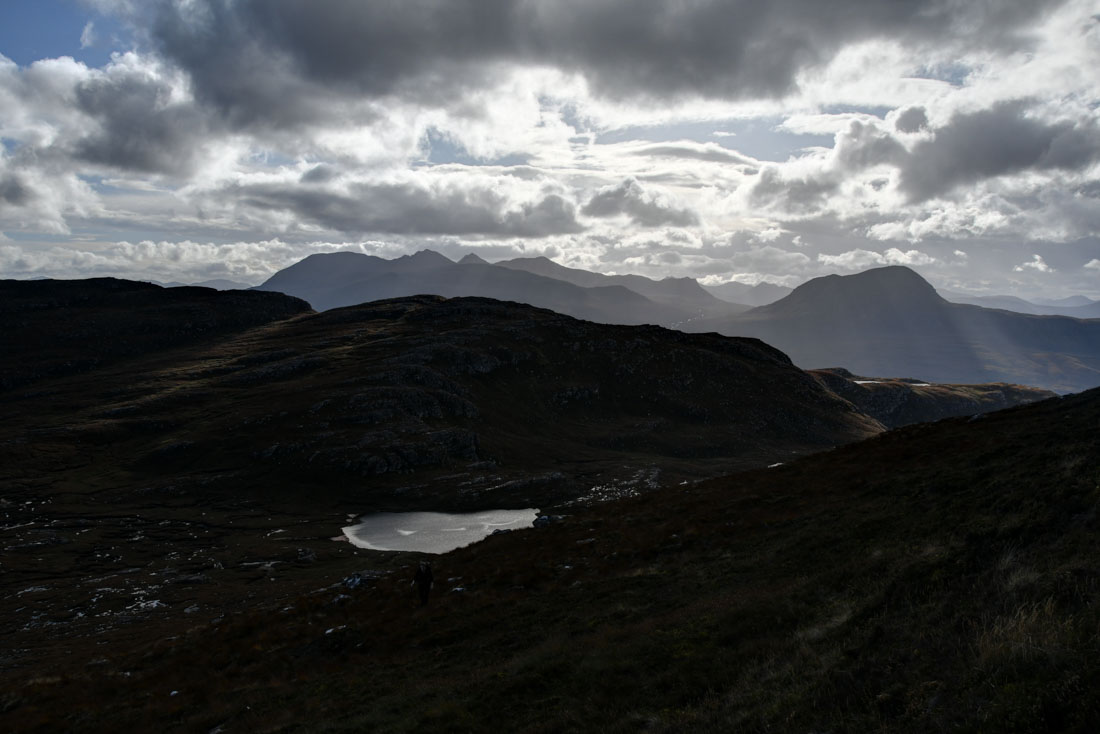 There is a nice alignment of hills from this angle along the Allt Aireasaidh (between Sail Mhor and Sgurr Ruadh of An Teallach) with Beinn Dearg Beag and A’Mhaighdean visible. 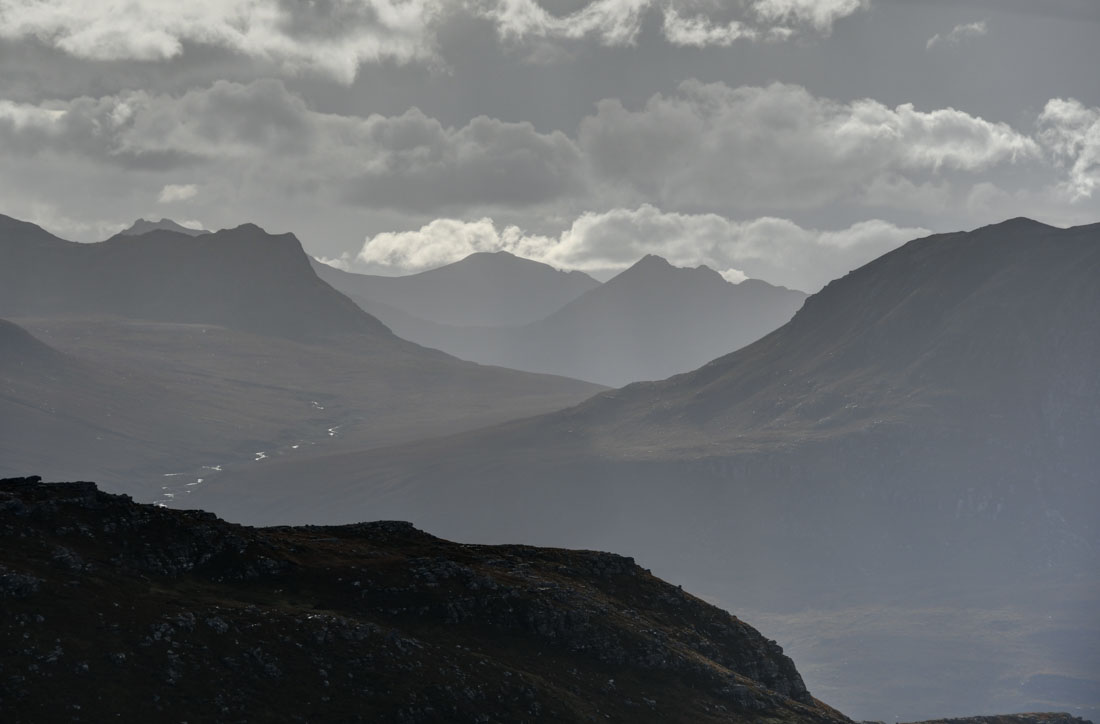 A little cloud was building as we got to the summit of Beinn Ghobhlach – but we were still in sunshine. There is a view down into Ullapool from the summit. 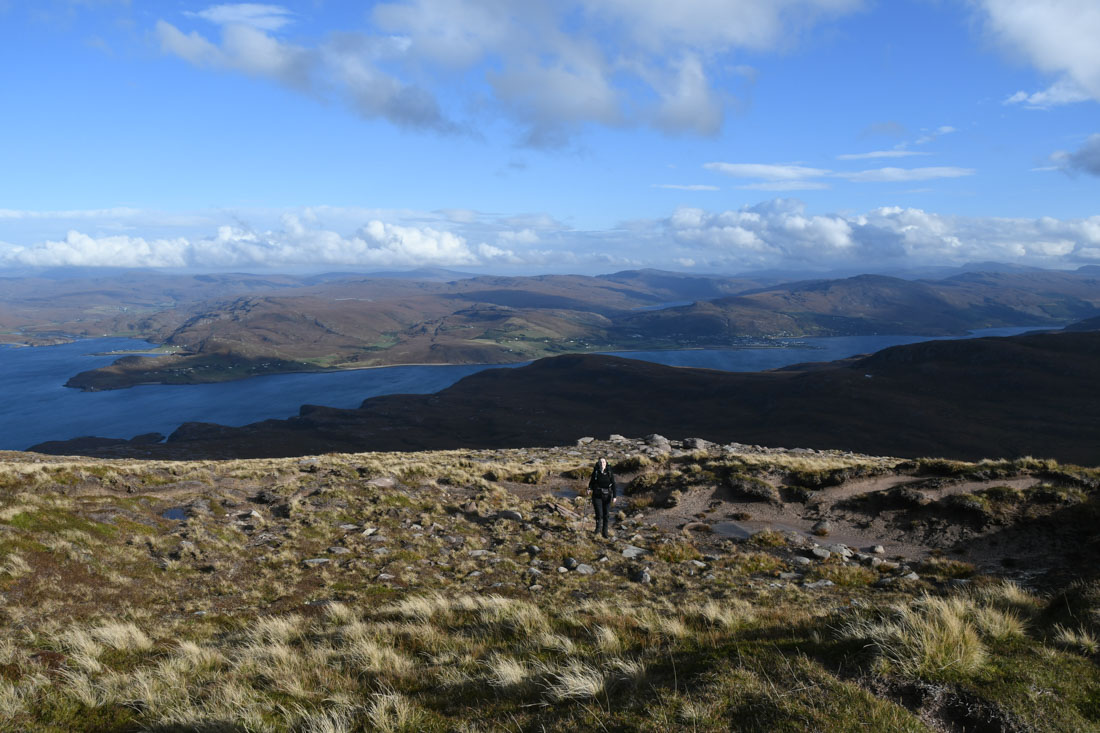 The Scoraig peninsula runs out to the NW – then it’s out to Lewis. 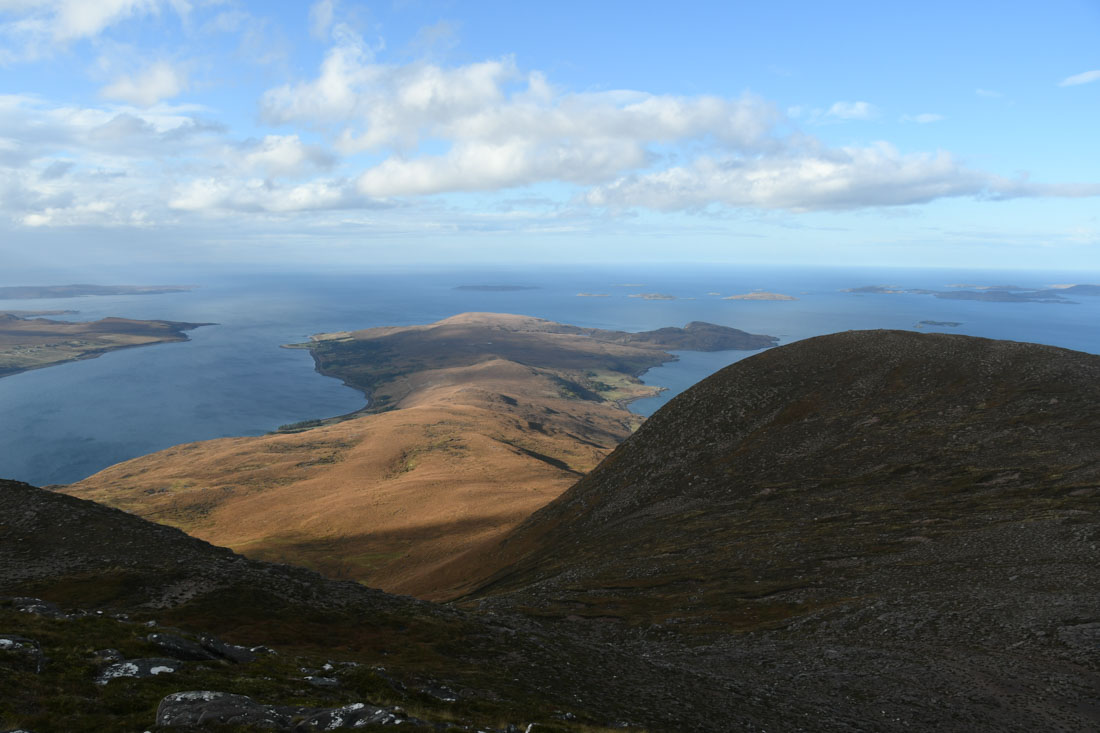 The serried ranks into Fisherfield: 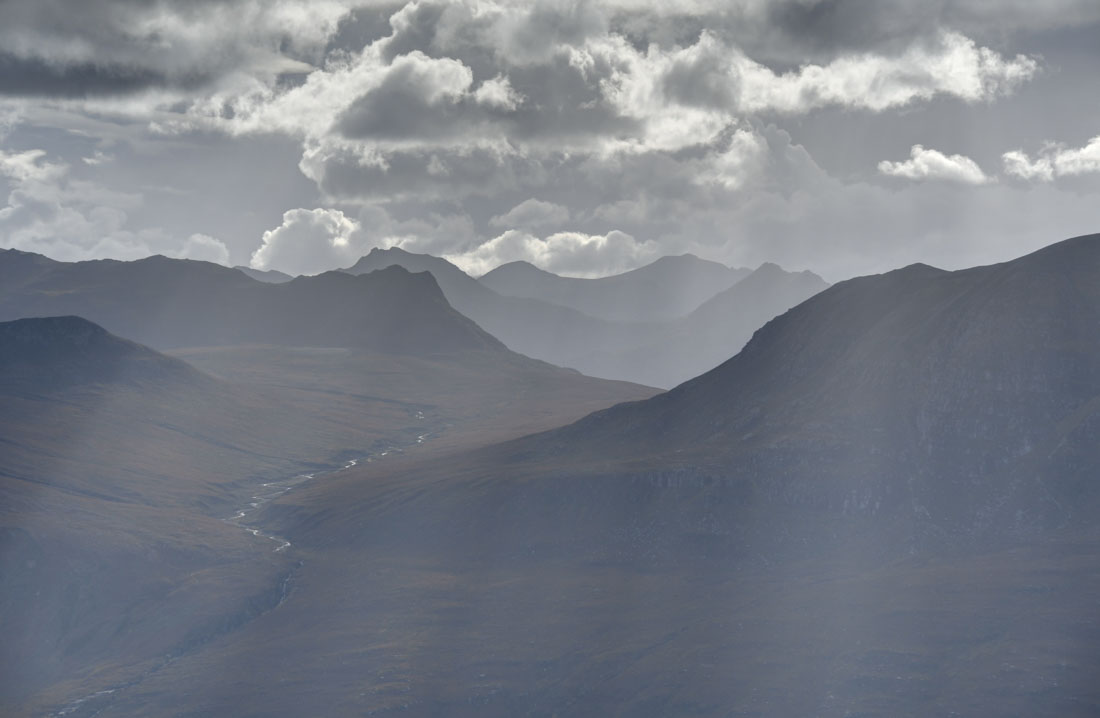 Ullapool and the Beinn Dearg group: 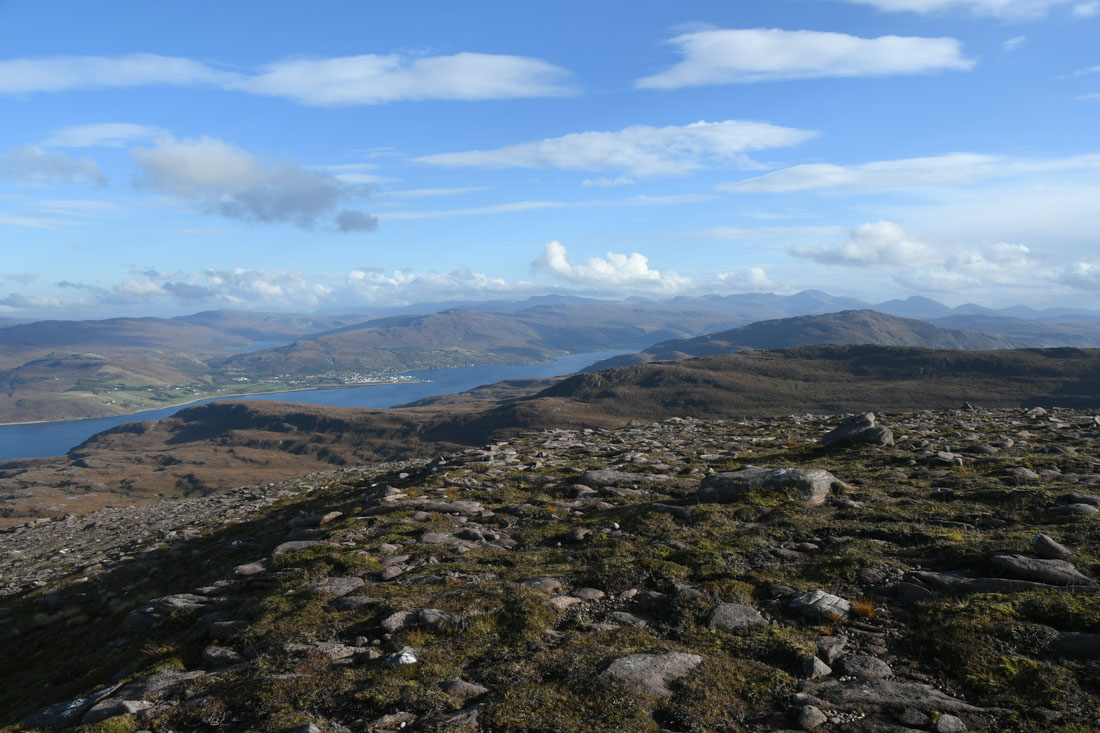 Had another break for food, enjoying the view. There were a few other people around, more than your usual Graham (although perhaps other weather forecast watchers driven to the NW strip like us).

It’s worth wandering round to the northern flank of the summit horseshoe for unobstructed views across to Coigach (and rather airy views down to the shore below). 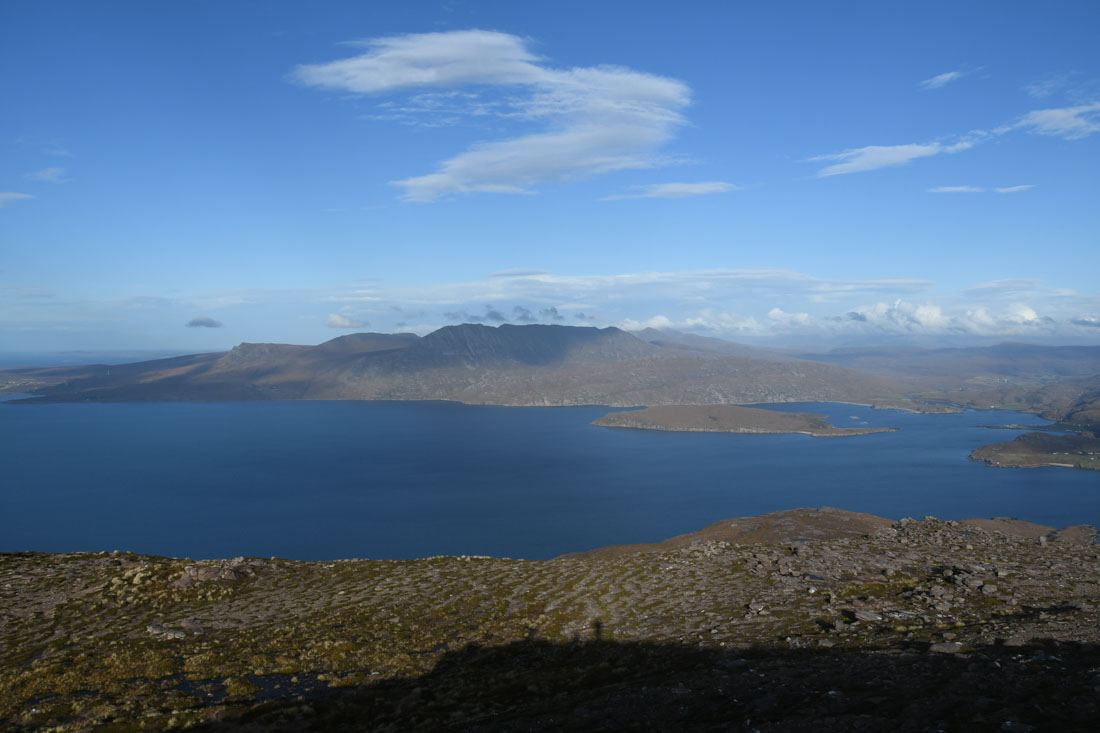 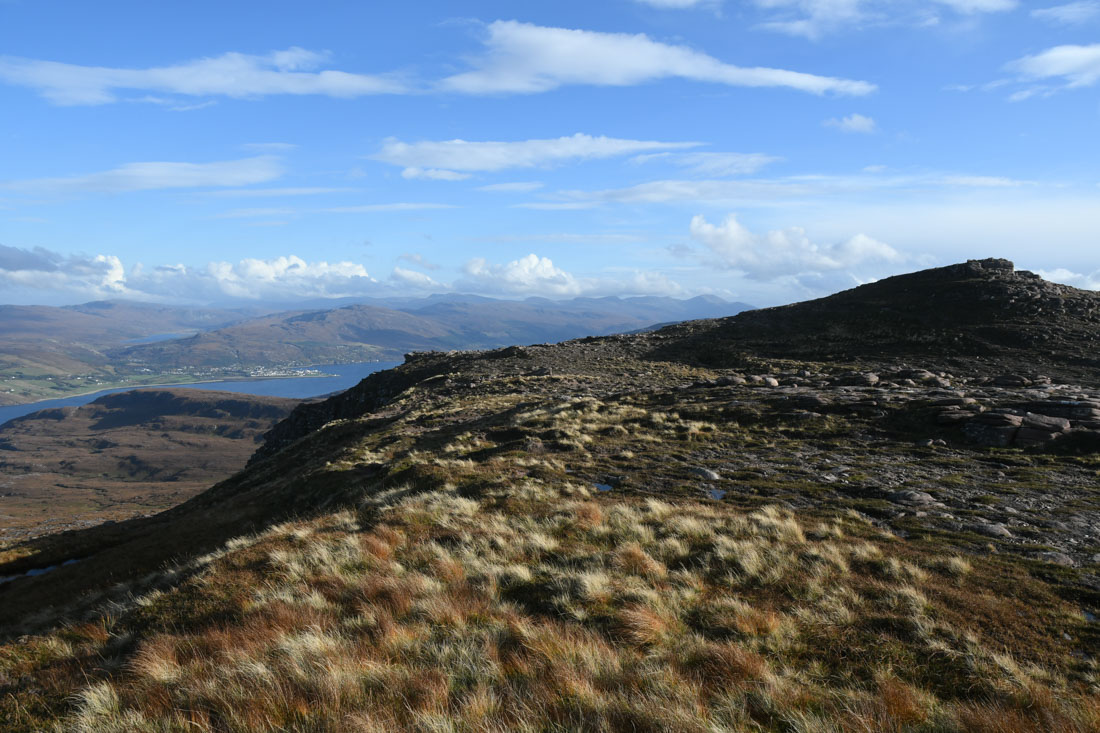 Scoraig peninsula and the northern flank: 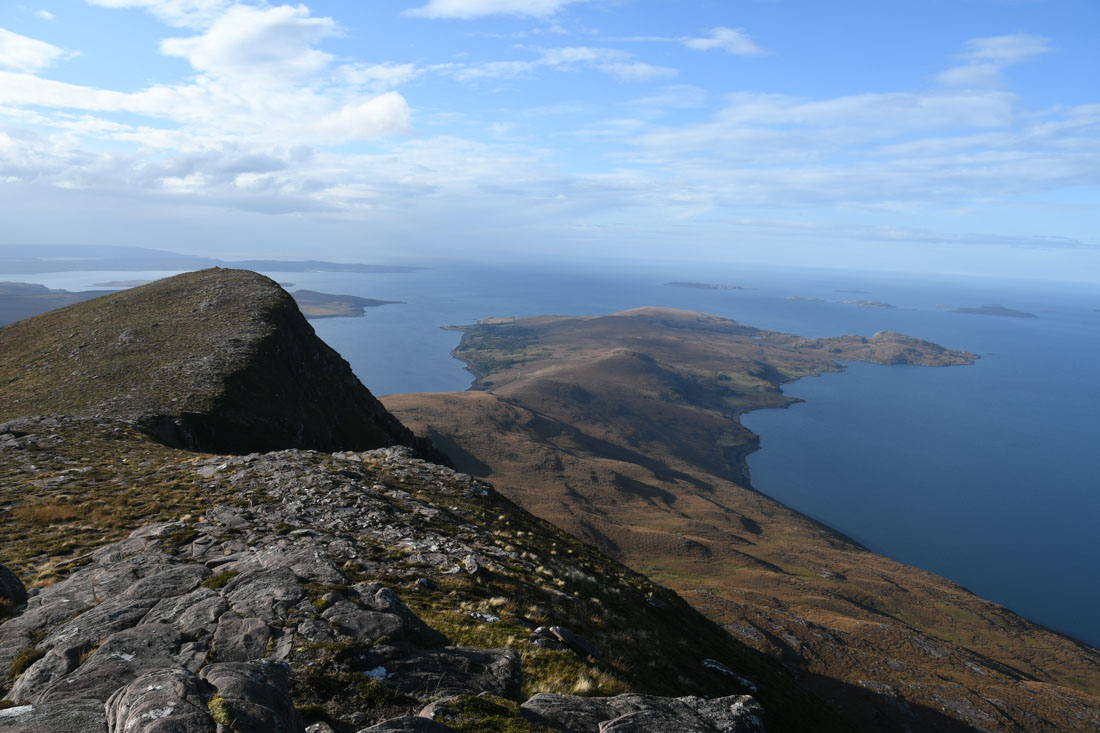 Dropped down Coire Dearg to start the return to the car, a nice strip of heather (grippy) to start, followed by a rather slippier run of grass/moss took us down to 300m.

We headed on a rather more extended loop this time, heading on higher ground almost as far out as the houses at Ruigh’riabhach to pick up the track back to the car.

An Teallach was starting to don its hat again in the later afternoon. 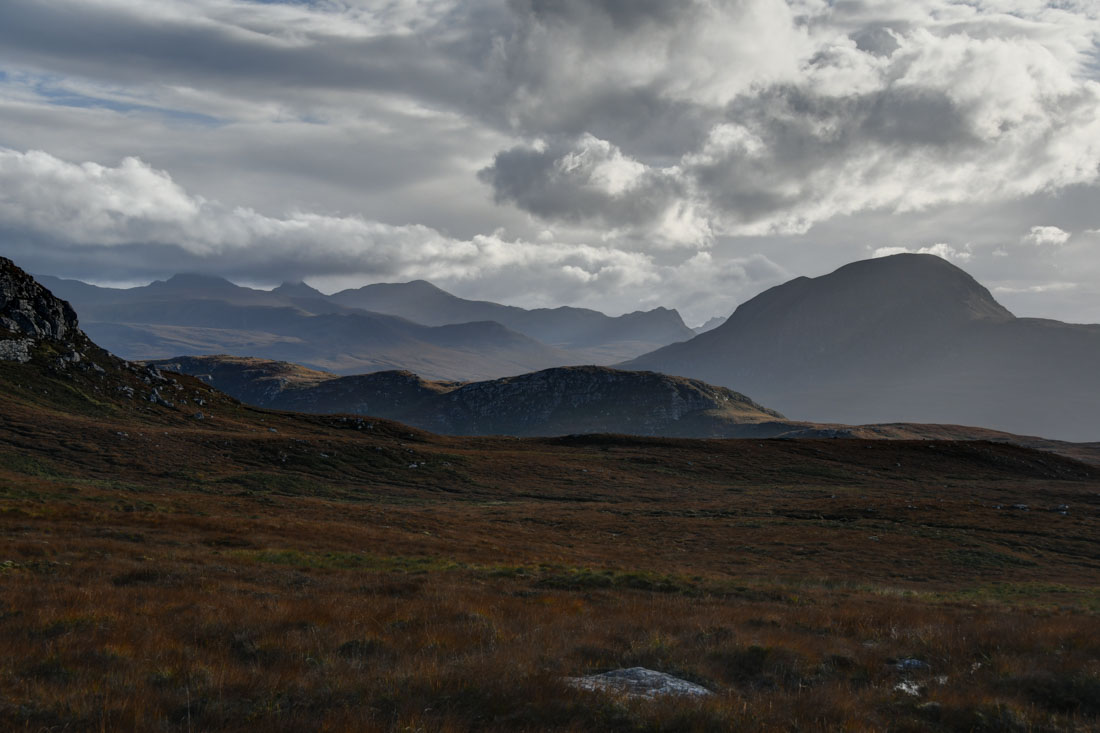 There’s a nice view of Beinn Ghobhlach en route to pick up the track: 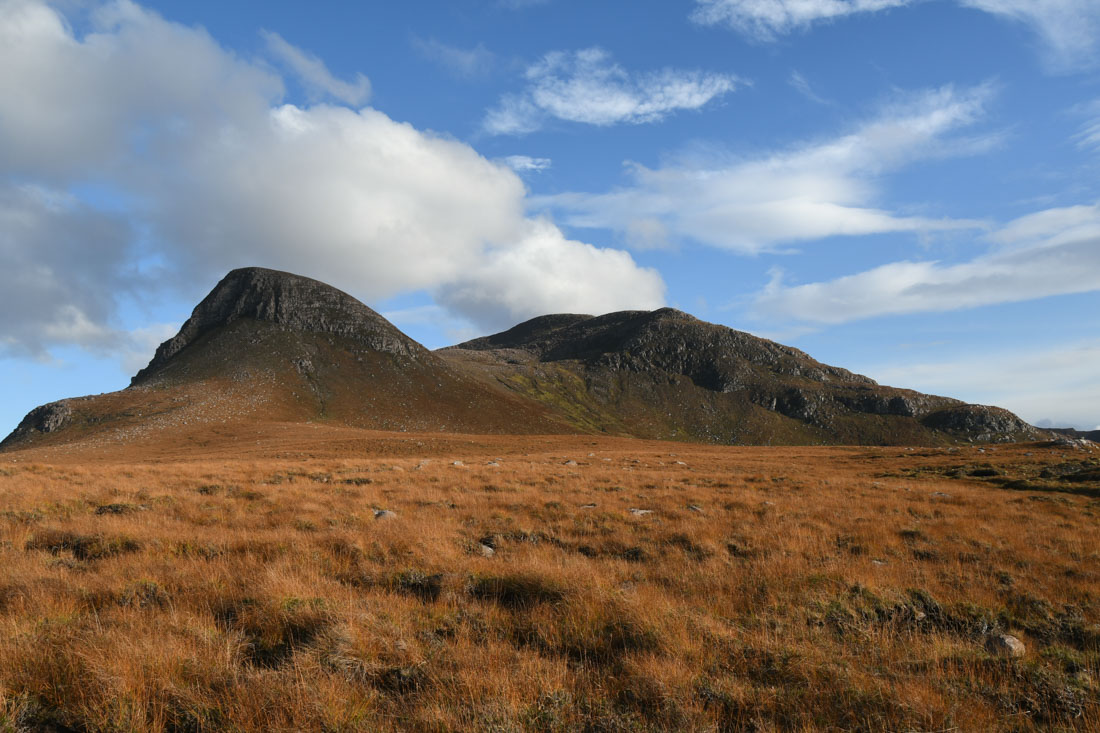 Dropping onto the track it’s 5km of easy walking back to the car. The track itself is good quality so this only took an hour or so. 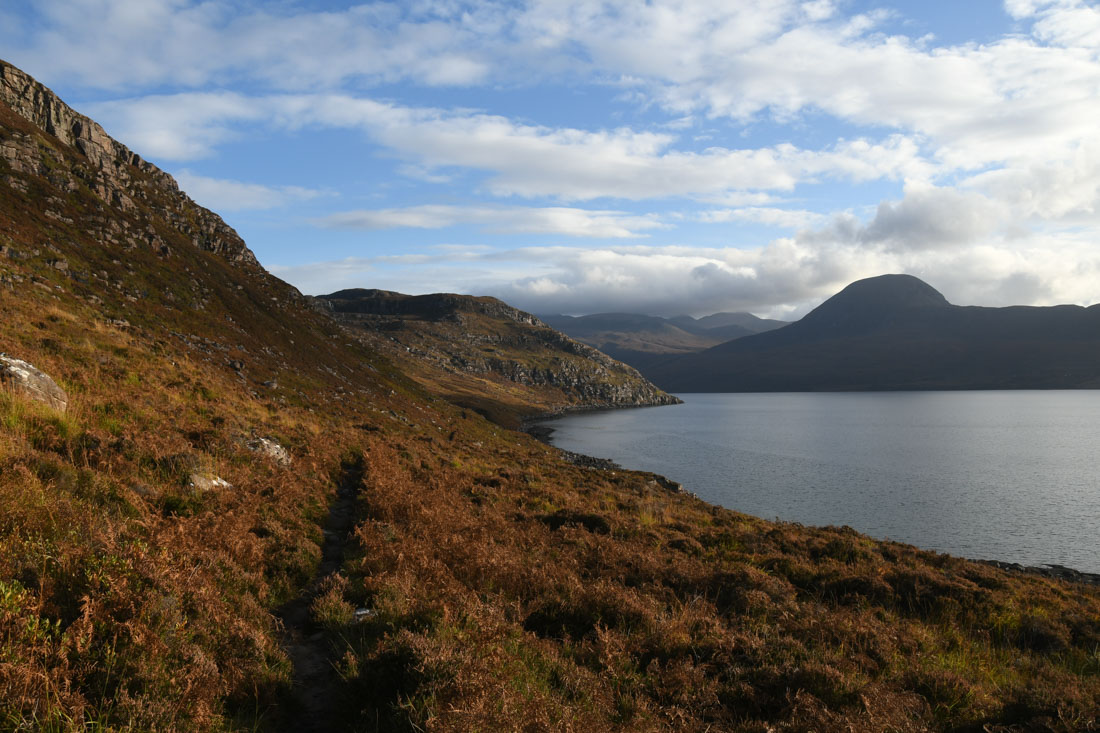 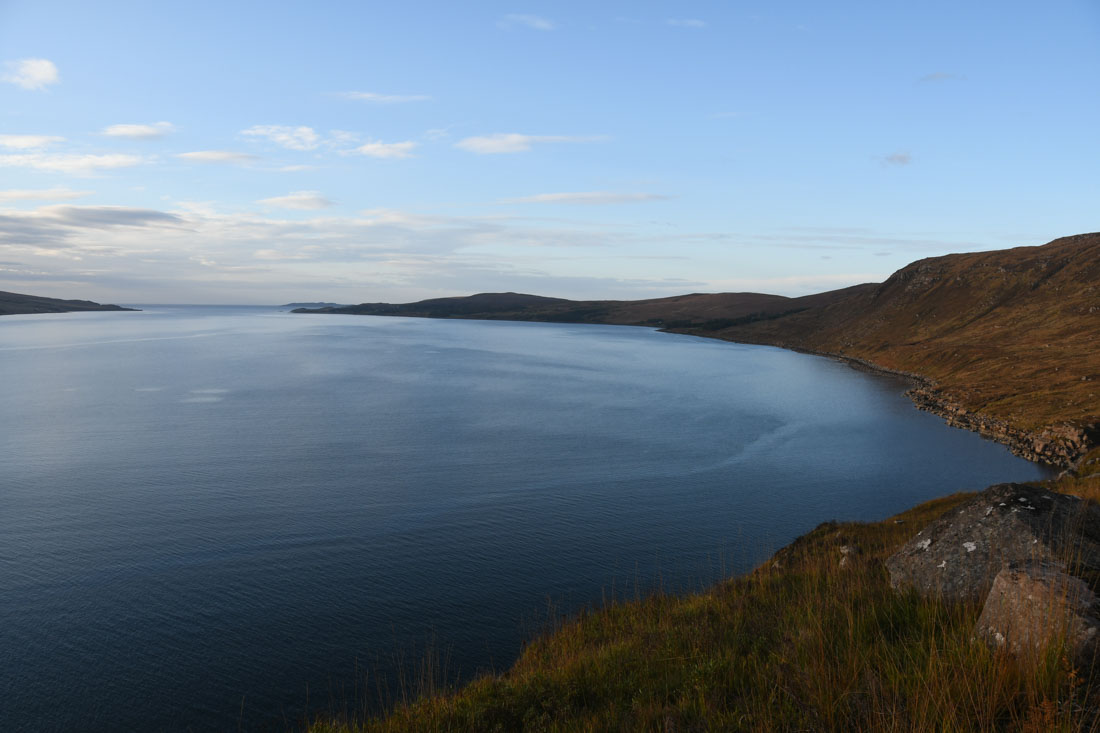 Saw a pod of porpoises loitering, spending more time still at the surface than usual – interesting to watch: 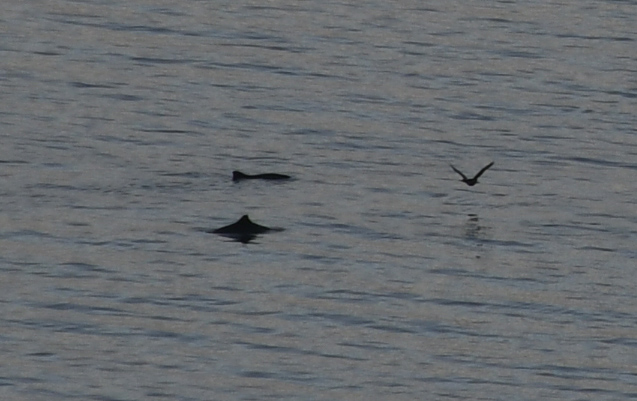 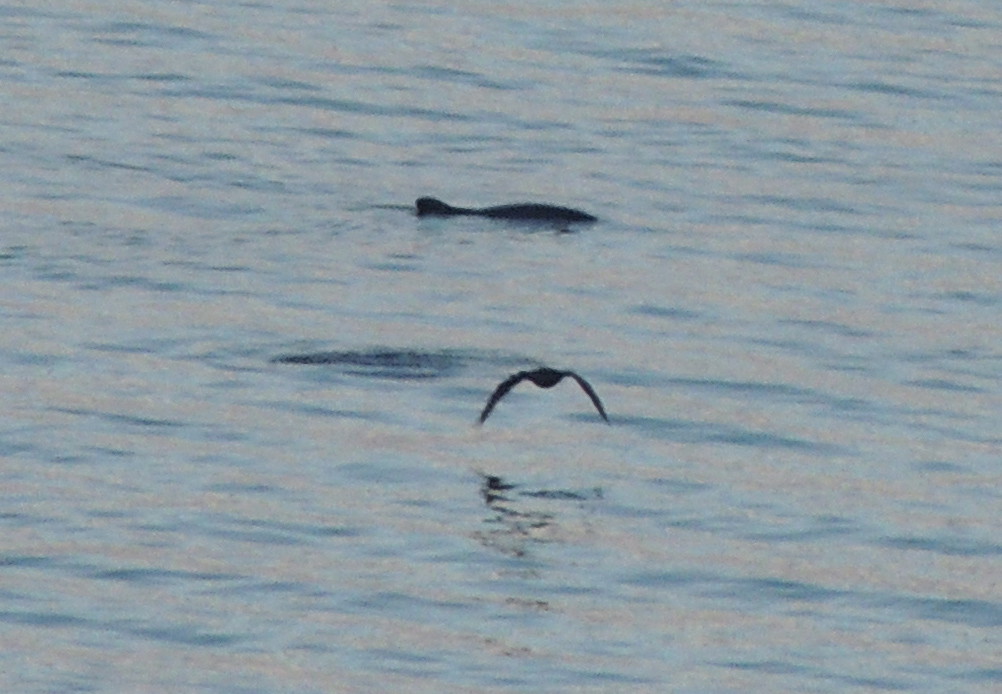 A great walk, well worth expanding by ascending Cnoc a Bhaid-rallaich, and by taking a longer loop of coastal walk.

Happily repeat this one again and again.