A mixed weekend saw rather cloudy and very windy conditions shift to cooler and sunnier conditions on Sunday.

With the sunniest weather forecast for the Lomond NP and a plunge of cold air, we thought we’d see if we could manage some long distance views from Arrochar.

Got going sharpish, about 15 minutes pre-dawn. The Forestry Commission has done a lot of path work in Arrochar, the changes since our first visit in 2003 are substantial.

It’s a fine path most of the way to the Cobbler’s summit now.

We broke out of the forestry just as the sun rose over the shoulder of Ben Reoch. 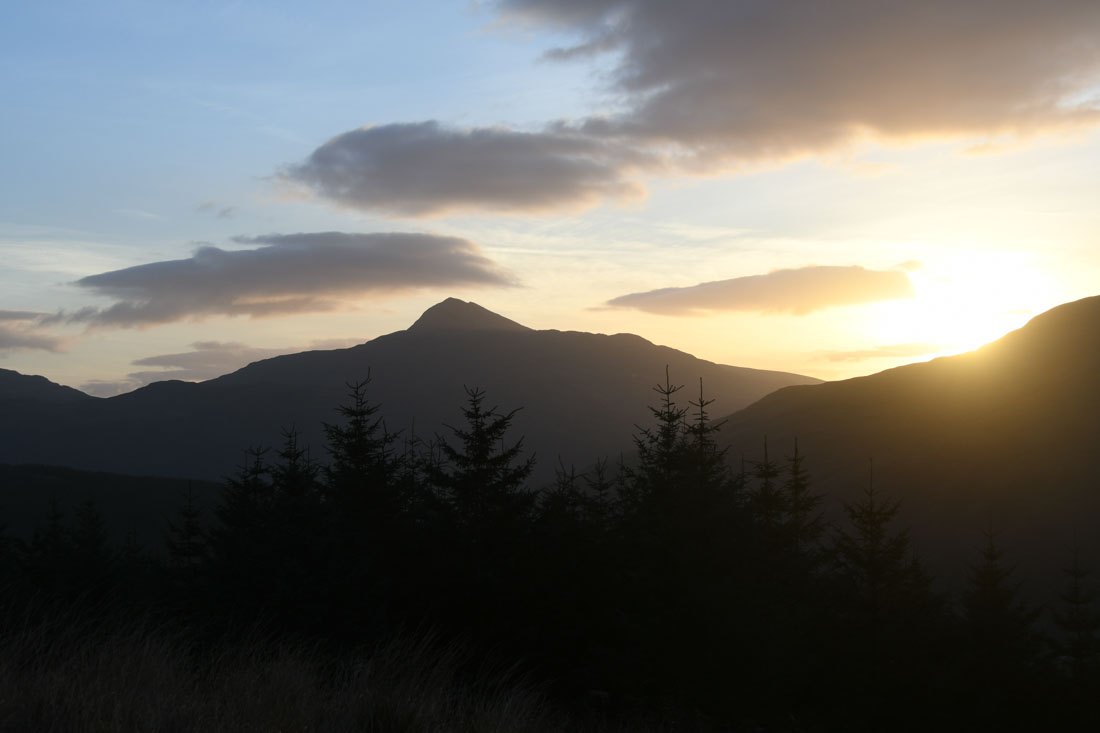 Nice syrupy early light on the autumn grasses in the coire under The Cobbler. 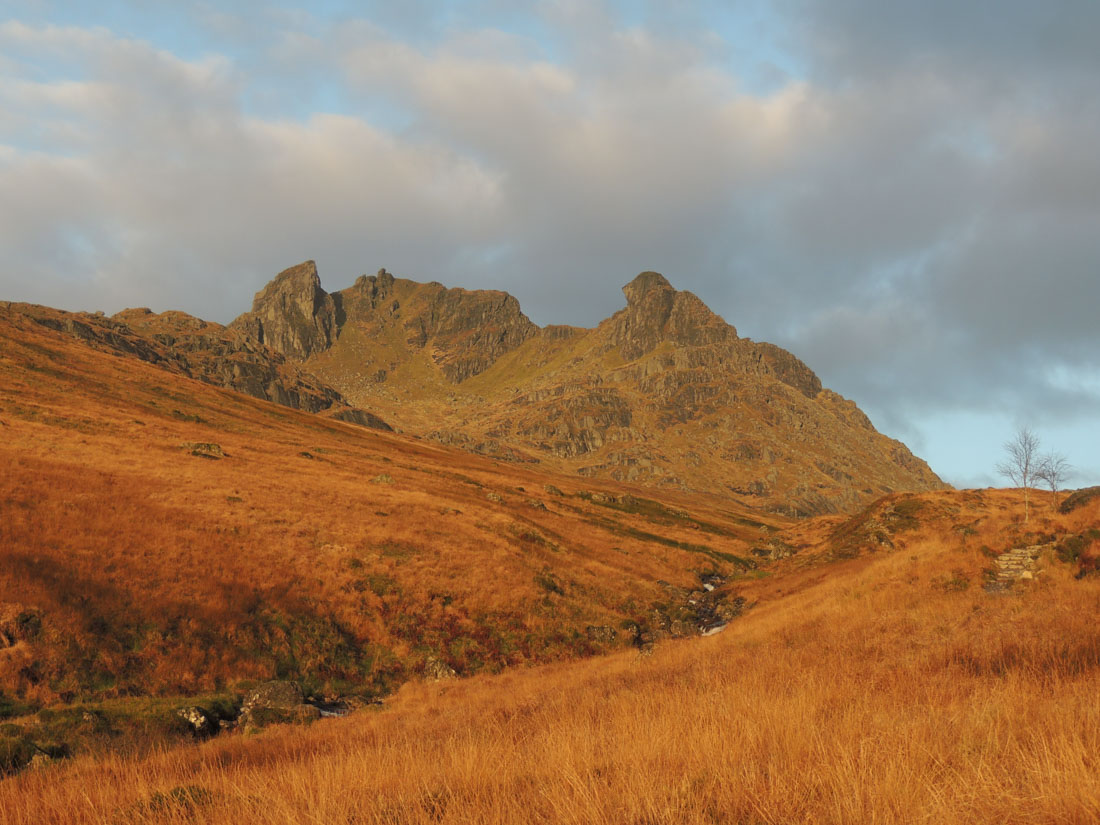 The slopes of Beinn Narnain are rather rugged. 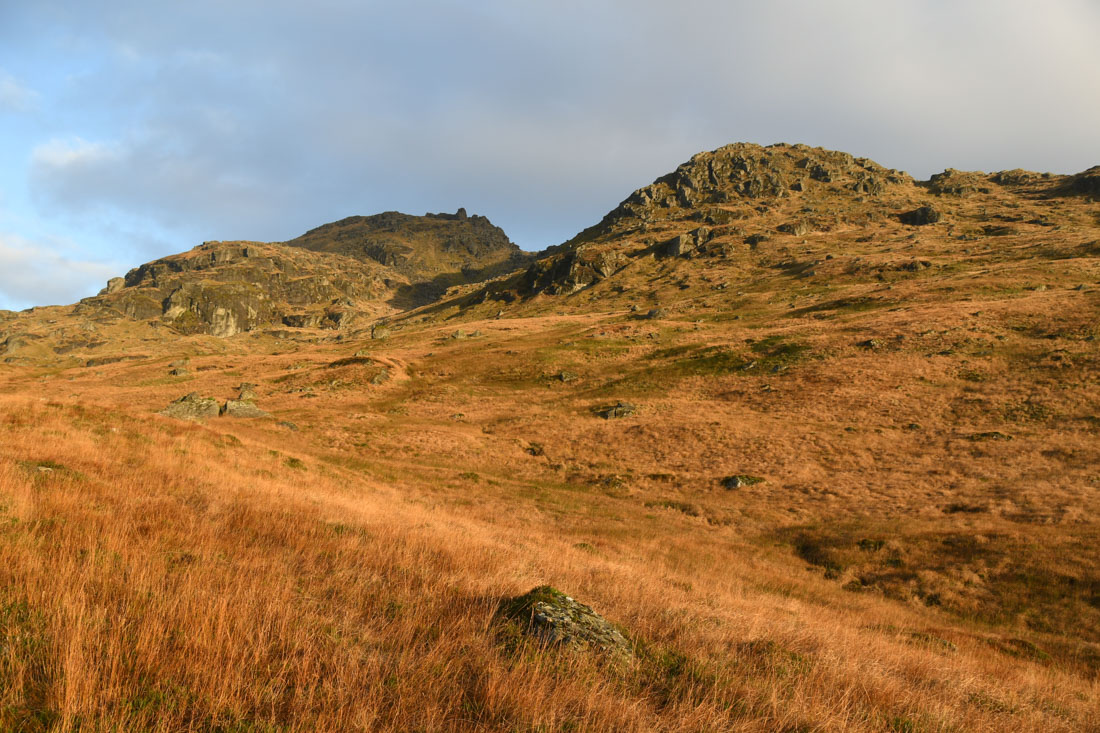 Made quick progress towards the Cobbler, stopping here and there to take some snaps: 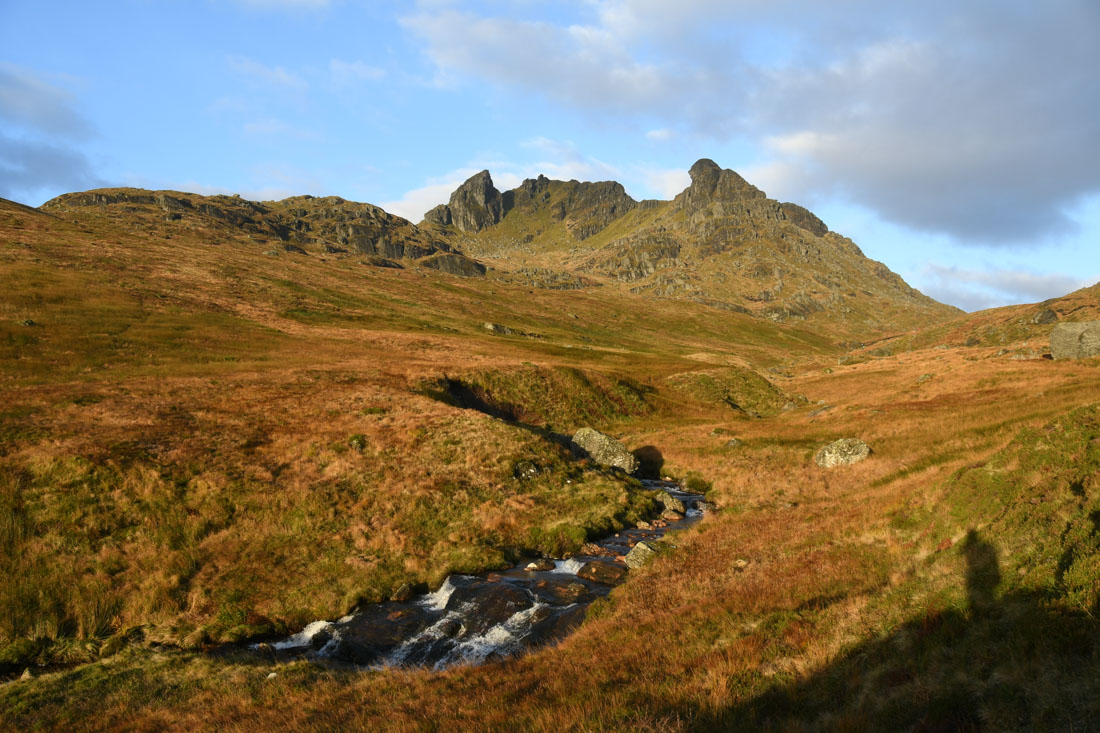 The path repair up the “front” of the Cobbler has come on leaps and bounds. It’s now nicely constructed up to about 700m elevation.

The hill itself is a rugged wee gem of ramparts and crags: 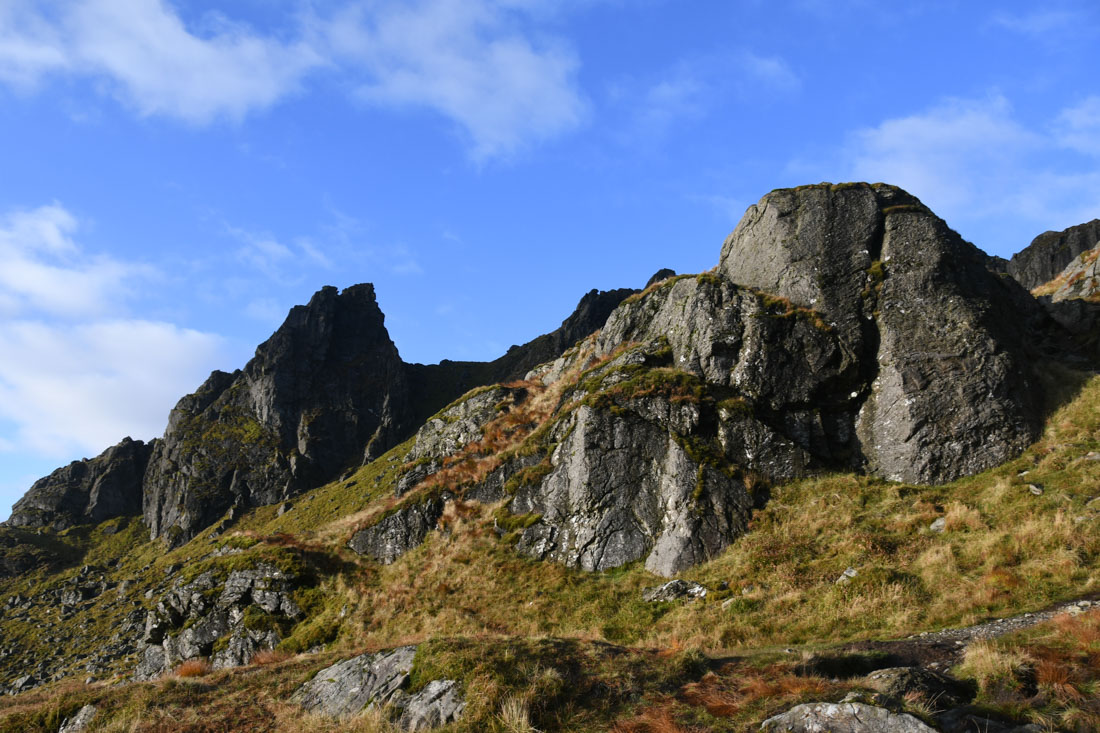 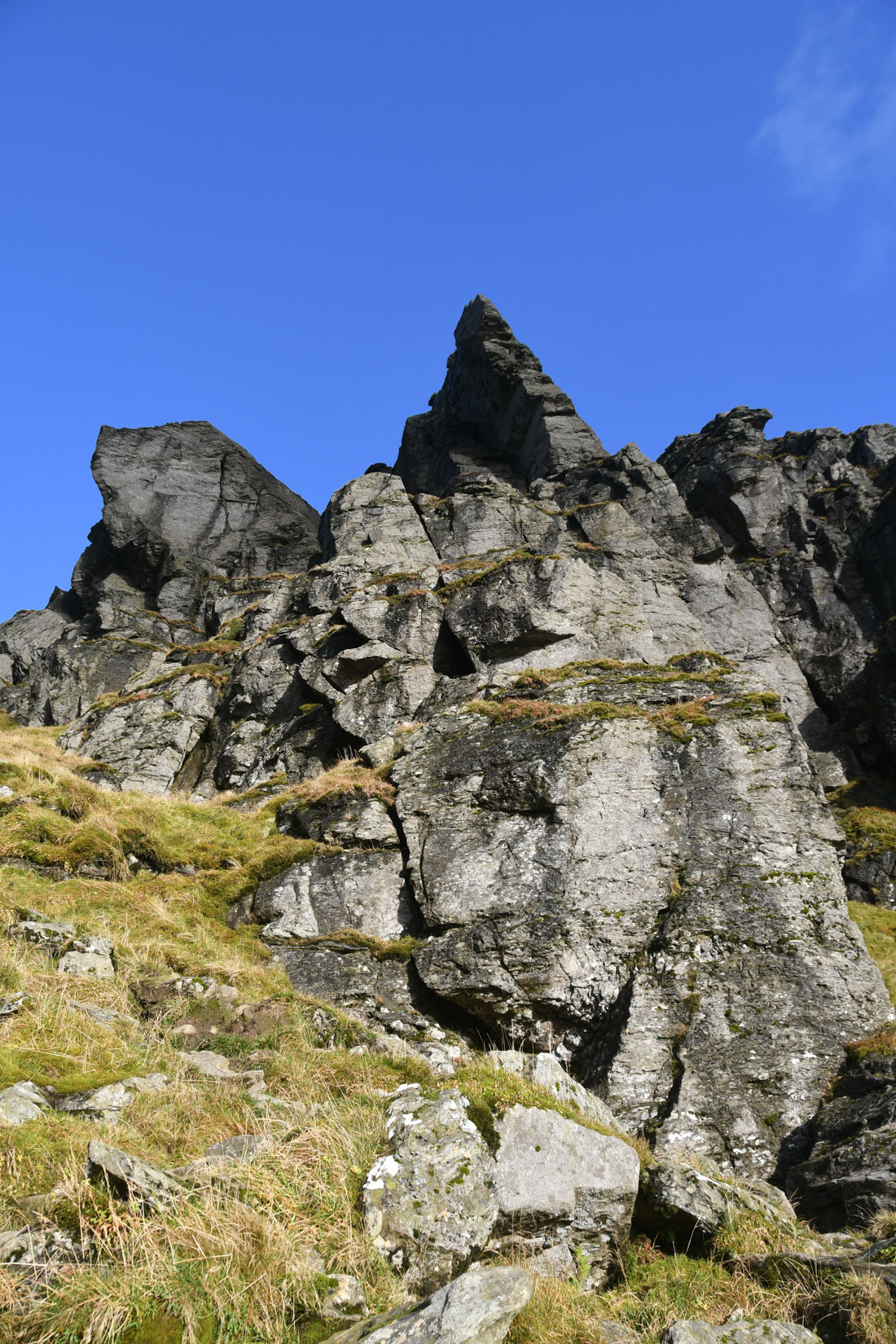 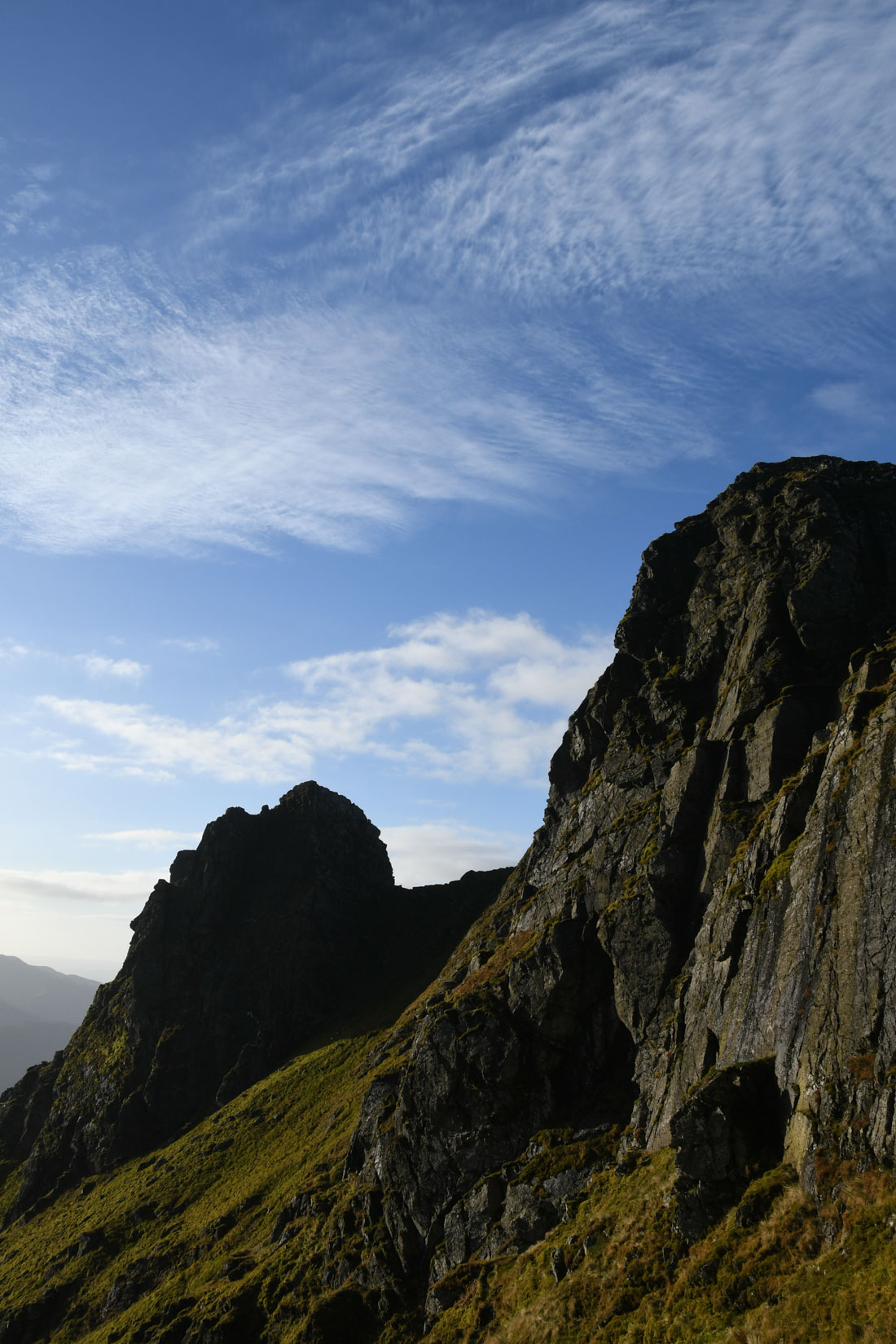 The path leads to the bealach between the tops and from there it’s a 50m ascent to the summit. There’s a nice viewpoint to the north top on the way. 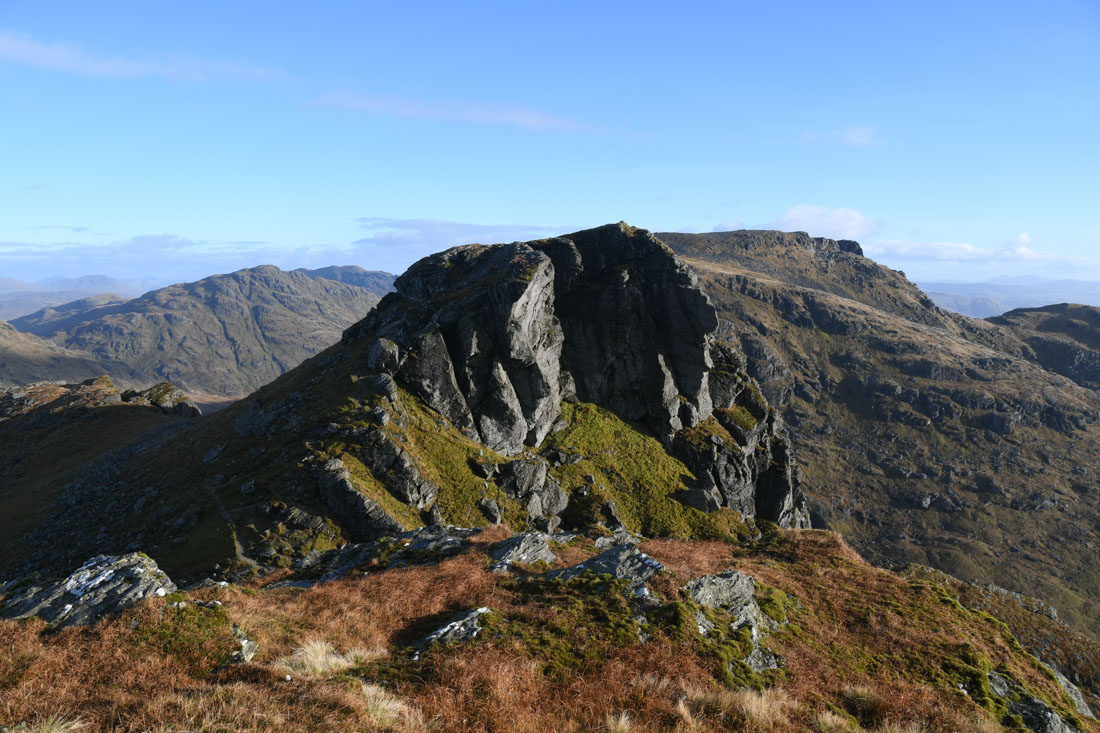 Beinn Ime was nicely lit too: 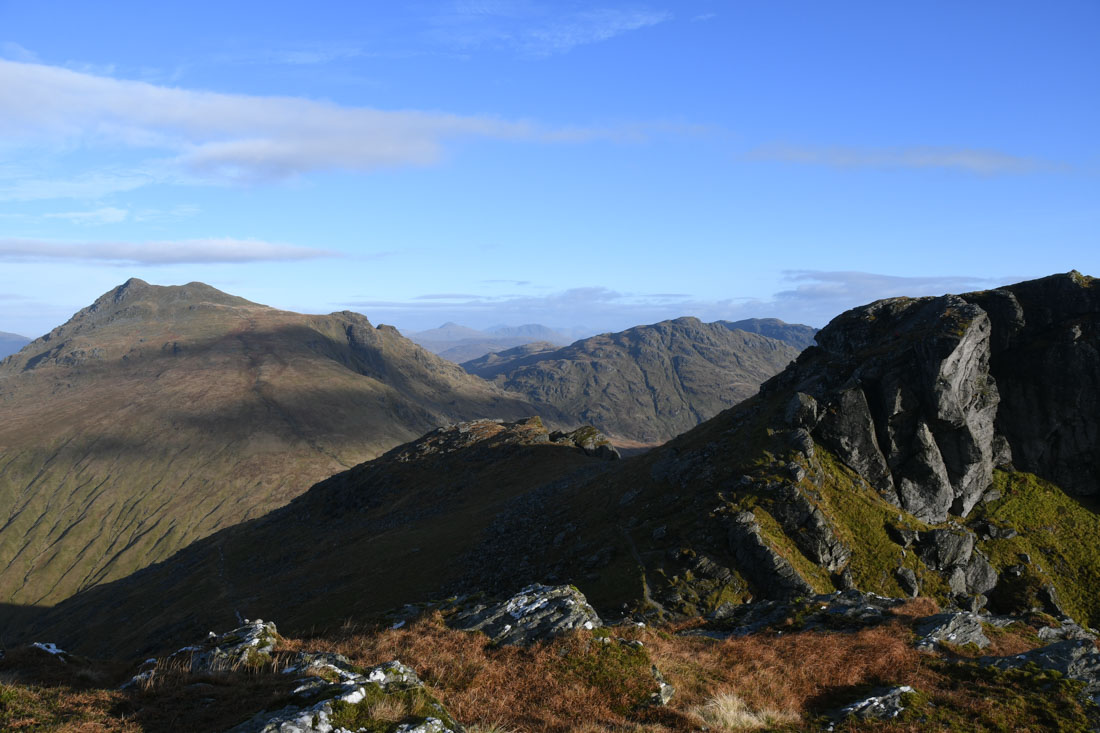 Nipped up to the top – a nice mini-scramble for an airy pose: 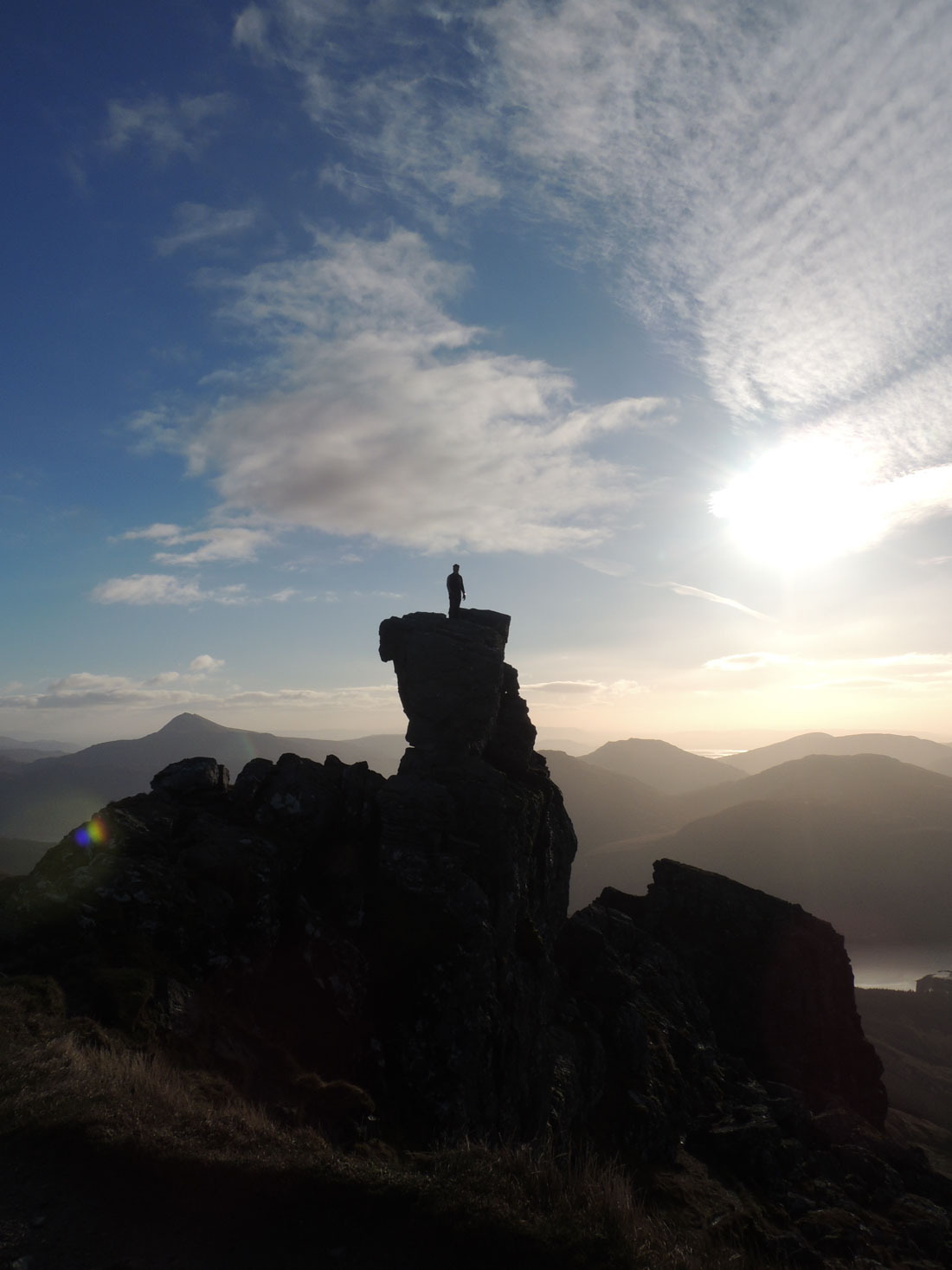 Despite it being a lovely day, we were rather peeved at the air clarity. Yet another ascent with nice local views and rather hazy distant ones.

Having seen Arrochar from Arran and even Colonsay before, it would be nice to get a view out to the islands. Arran, Jura and Mull should all be visible on a day of decent air quality. 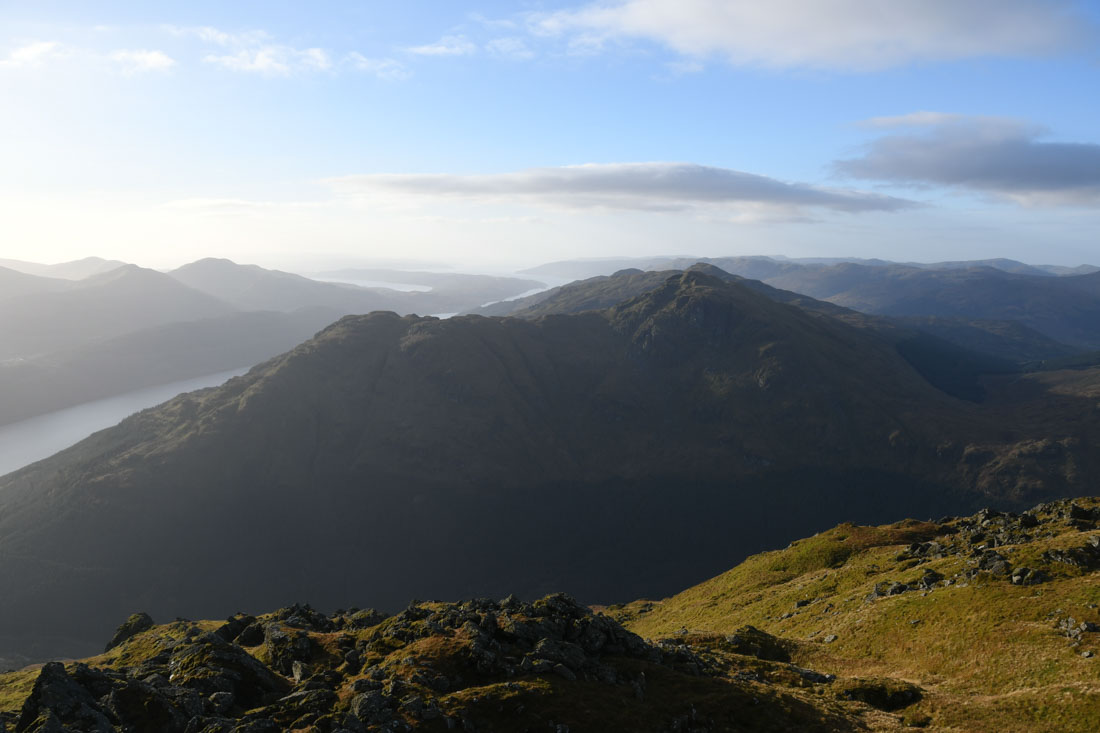 One last summit pic and then we headed off down the “back” of the Cobbler. 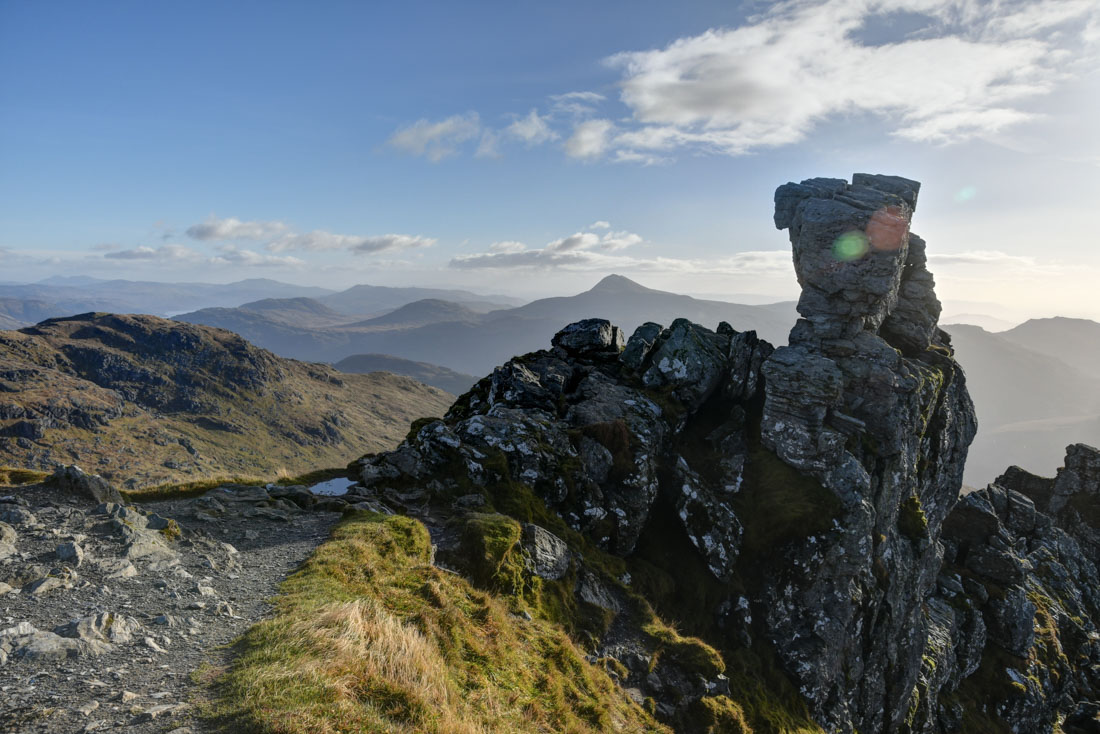 There was a large flock of fieldfares moving around the summit area. Their mad chuckles are a feature of October. They’ll soon settle down to their lower level winter feeding areas.

The path running north down to Bealach a Mhaim is another very well built staircase. Quickly descended to the north side of Beinn Narnain. 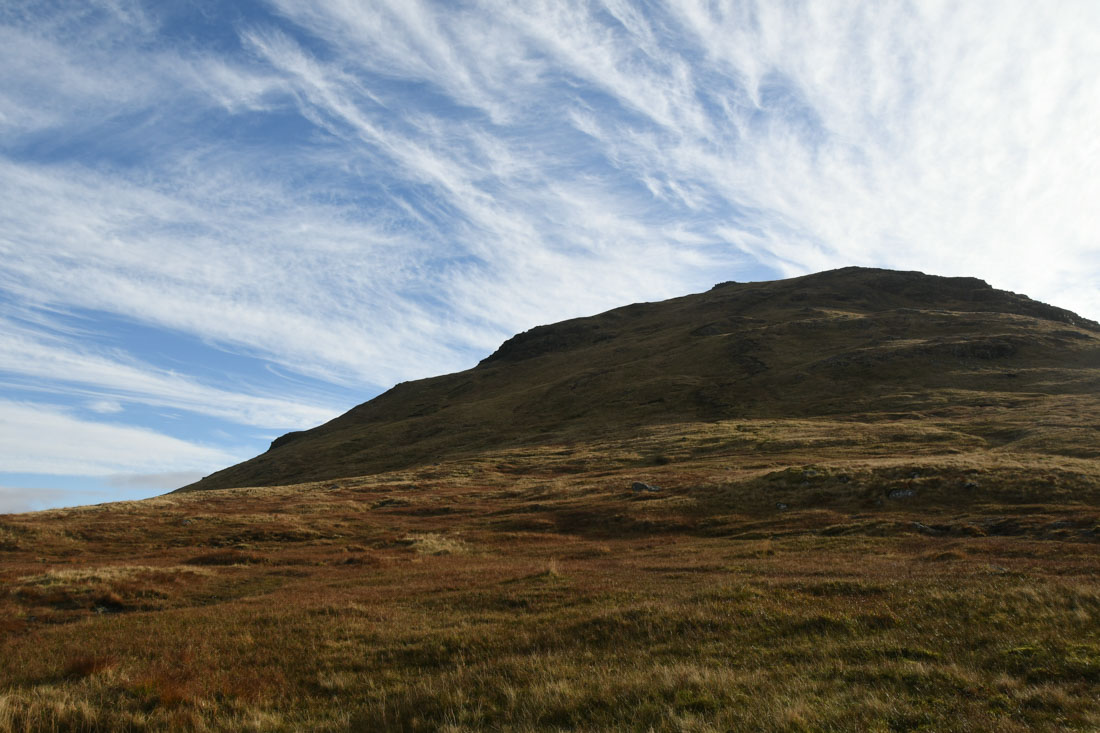 The well-built path ends abruptly at the fenceline across Bealach a Mhaim, the edge of the Forestry Commission estate. From there the ascent of Beinn Ime is rather soupy.

It’s a 400m ascent up Beinn Ime, good to get a bit more ascent for the day. Once near the summit area there are some nice views. 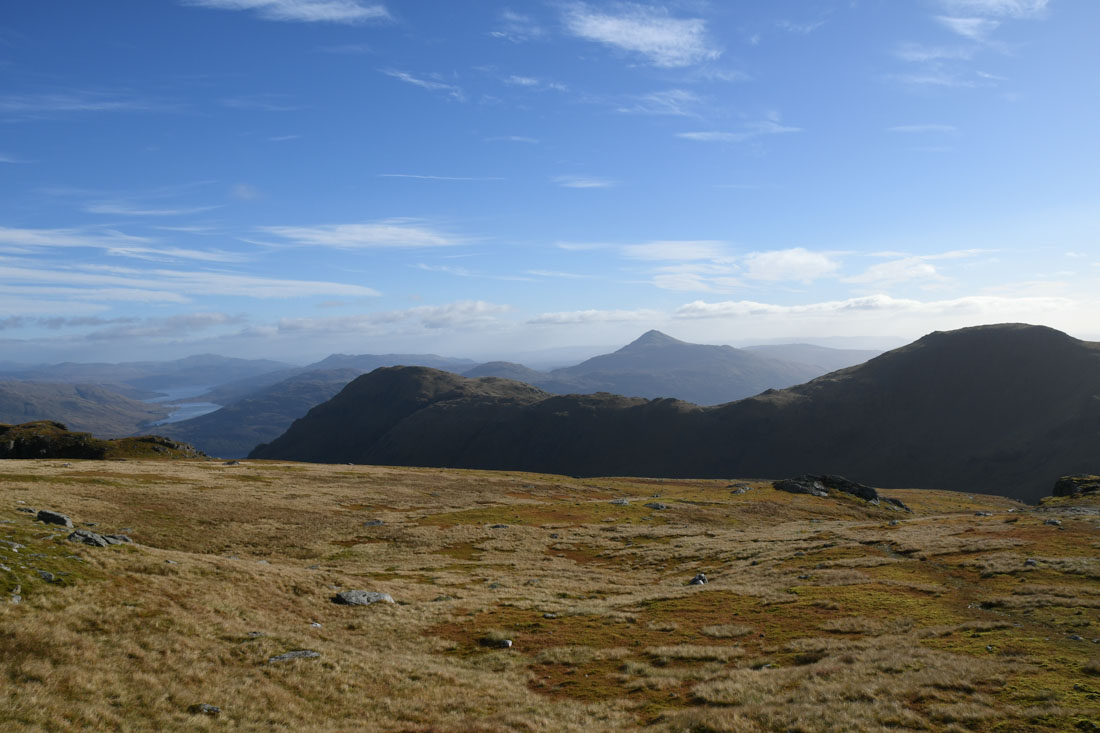 Sat on the lee side of the hill, out of what was a well-heralded rather chilly breeze. Had our lunch and enjoyed the view.

The traffic was fairly zipping along Glen Kinglas: 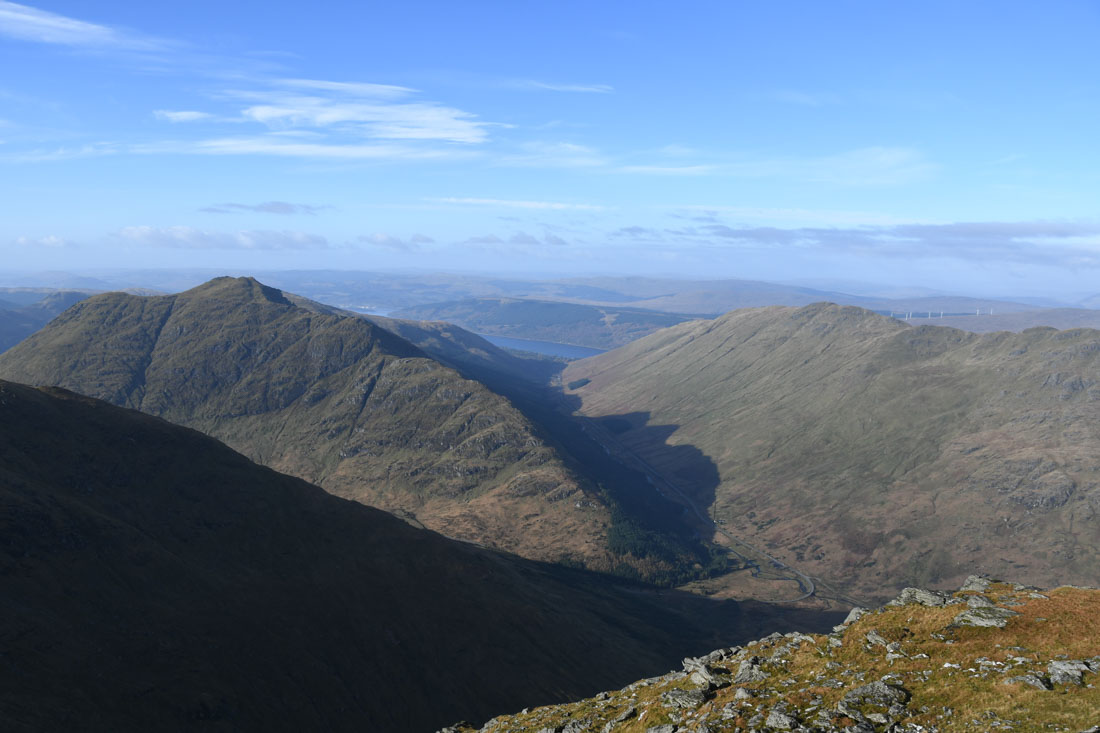 Had an unexpected, and very welcome, view of a juvenile Golden Eagle circling under us, over the bealach with Beinn Luibhean. Too far away for a good pic, but we got nice views through the binoculars: 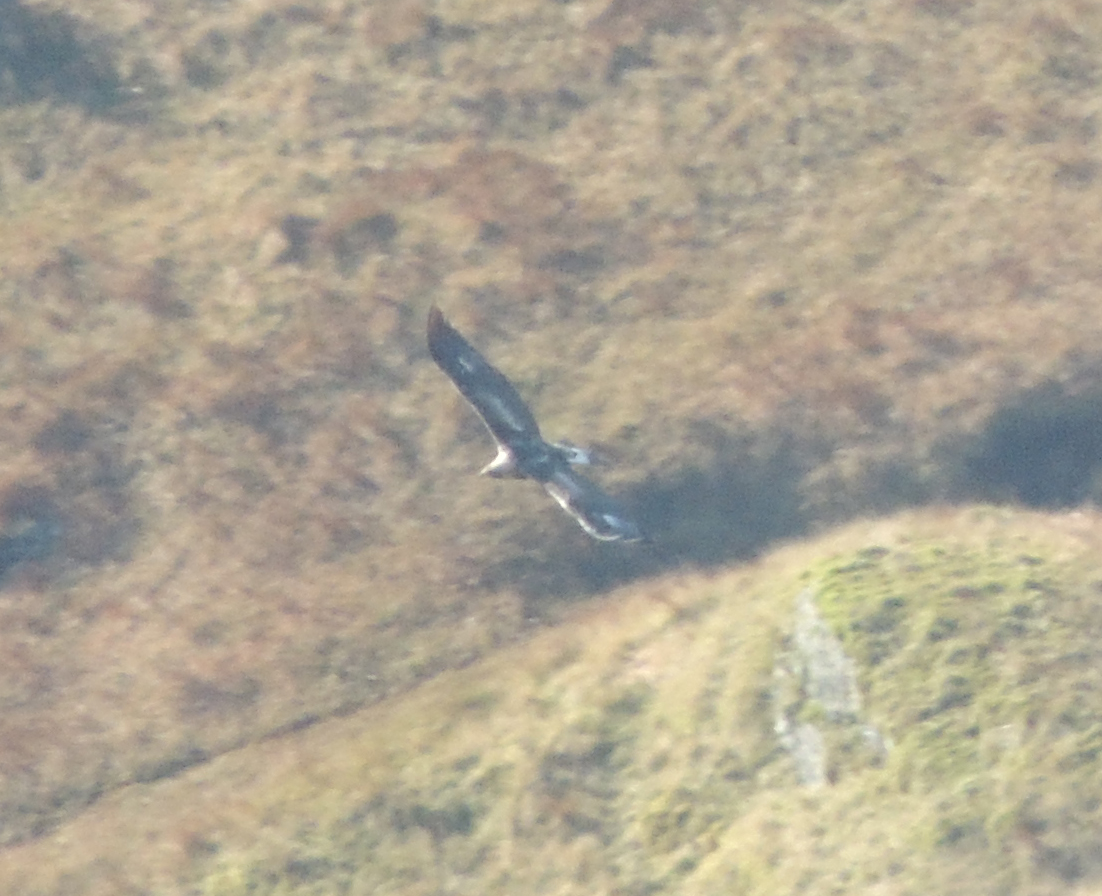 Had a wander before descent, enjoying the views. The view east is eye-catching: 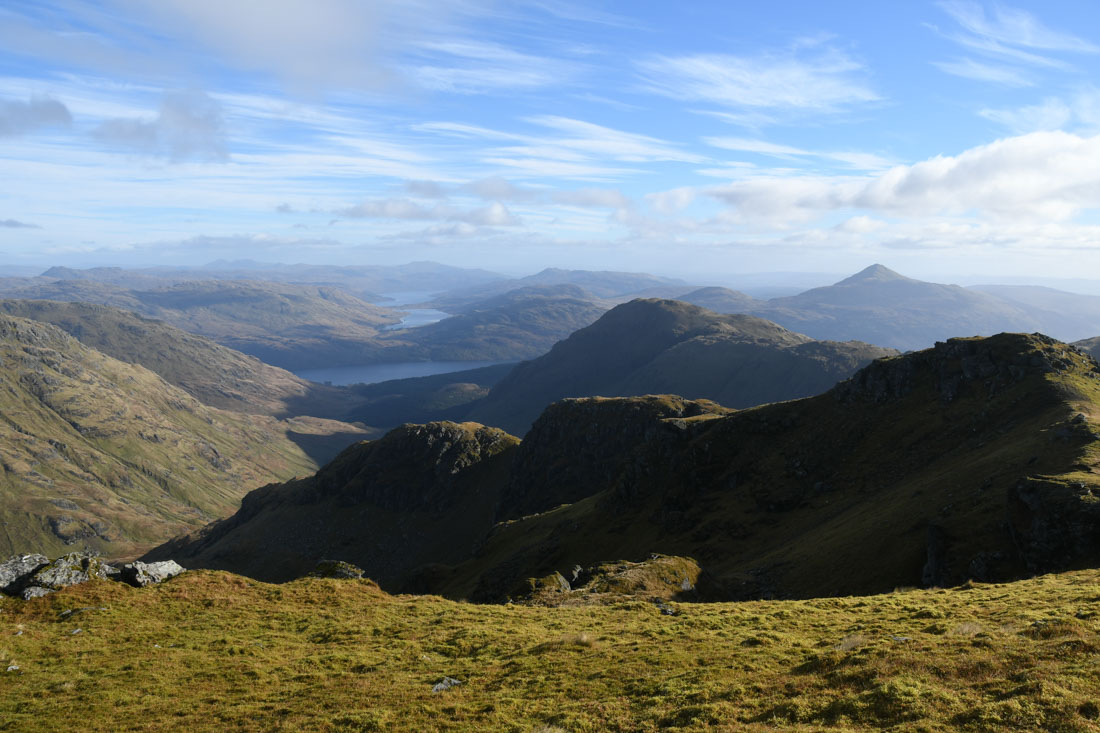 To the north Ben Lui is easily seen. Cruachan and Bidean were much hazier. 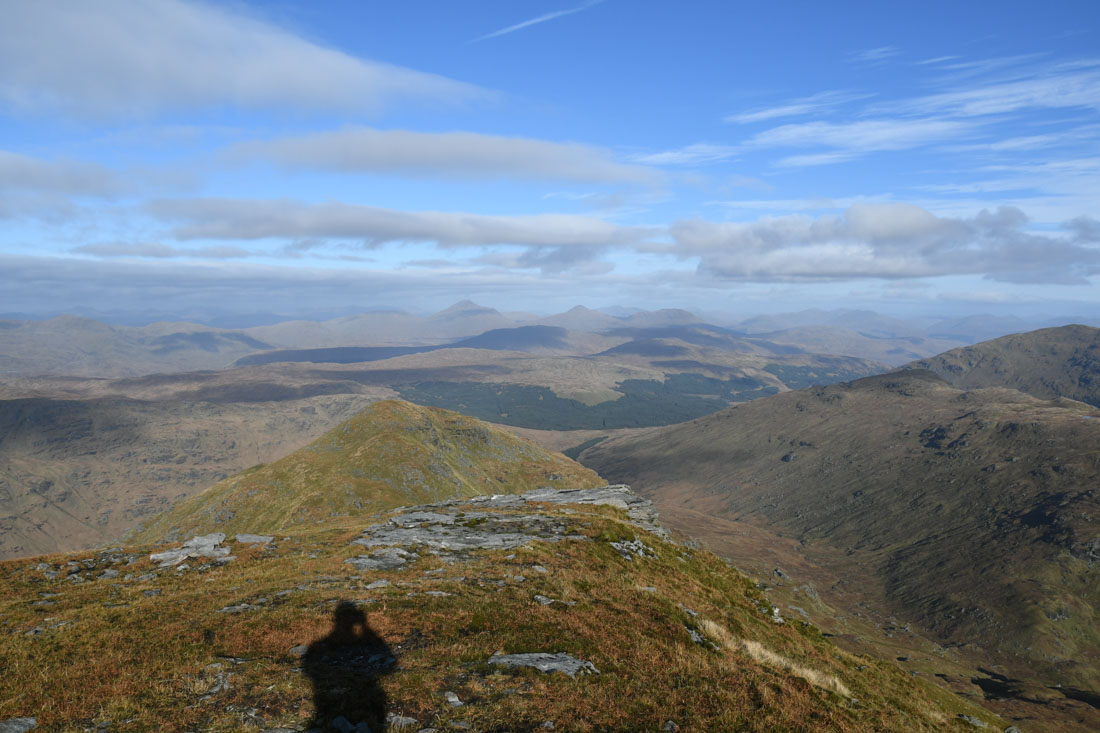 Headed back downhill – the Cobbler was silhouetted into the sun. 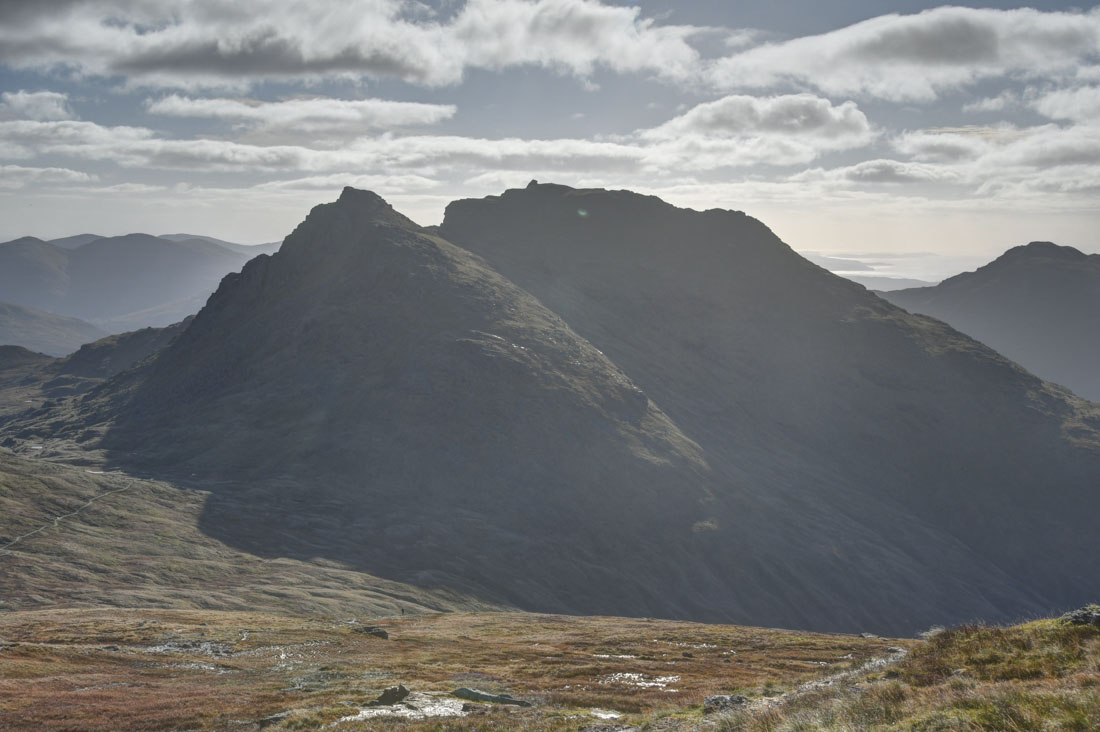 We’d wondered about heading over Narnain too – but decided that we should simply bimble back direct.

Arrochar is always a bit of a culture shock for us. Being used to wandering on NW Highlands Corbetts and Grahams, and Hebridean hills and beaches, sharing the hill with hundreds of people is a little unsettling.

Still, a lovely day and truly lovely hills so everyone else had the same idea we had.

The glen between Narnain and Cobbler was a warm suntrap for much of the return – pleasant to be out in perceptible warmth. The views of the Cobbler are good too. 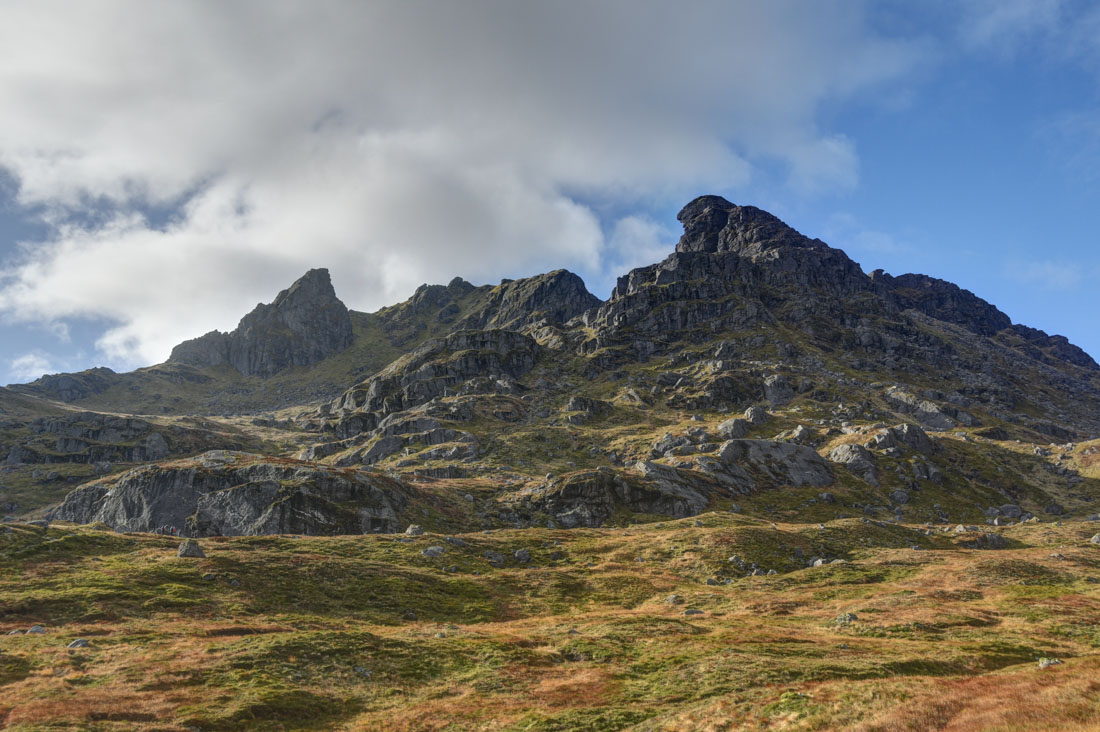 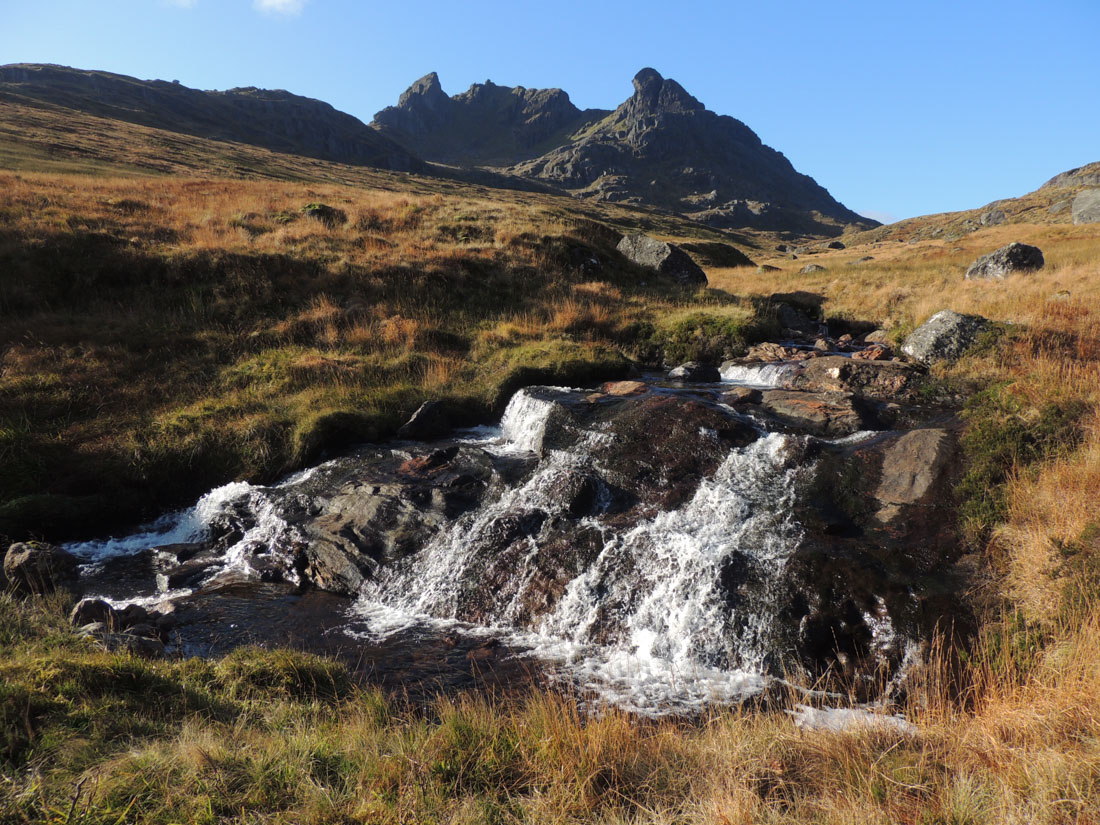 The car park was mobbed on our return. Took a little while to stand at the shore and listen to the Oystercatchers and curlews before getting in the car and heading home.

We still have that date with a decent air clarity day to attend to.