The logistics of our weekend meant that we needed to be on Mull by Saturday afternoon. We decided to head out Ardnamurchan and use the Kilchoan-Tobermory service, allowing another visit to Ben Hiant.

Across the Corran at 0630 it was a slightly white-knuckle drive on a road, that although gritted, had stretches of rather low friction iciness.

Parked up below Ben Hiant at 0740 at the foot of the wind turbine road at NM 551 640. Got booted up and headed up the hill path. It’s a wee hill, so ascent time is only around 1 hour, with a path all the way.

We were walking pre-dawn, with rising light.
Ben Hiant: 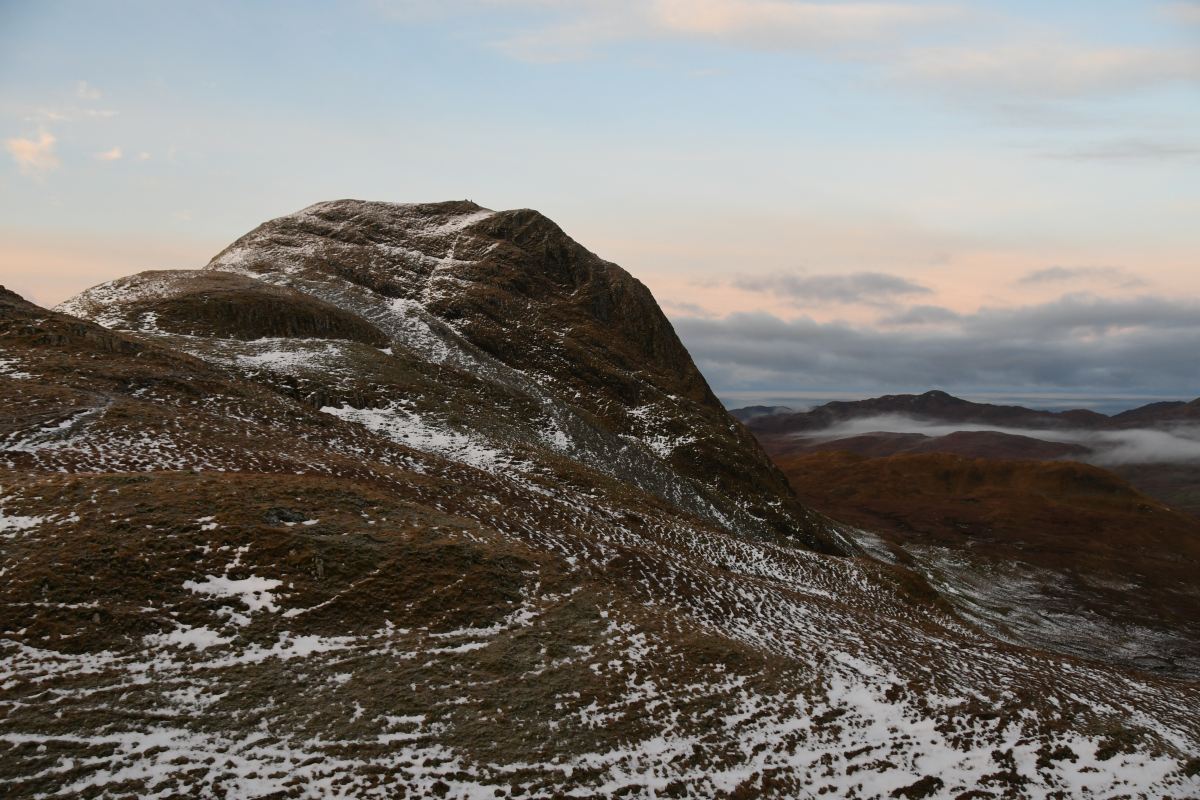 There was quite a lot of atmosphere – MV Clansman sailed past on the Coll/Tiree run, clad in mist.
Ferry: 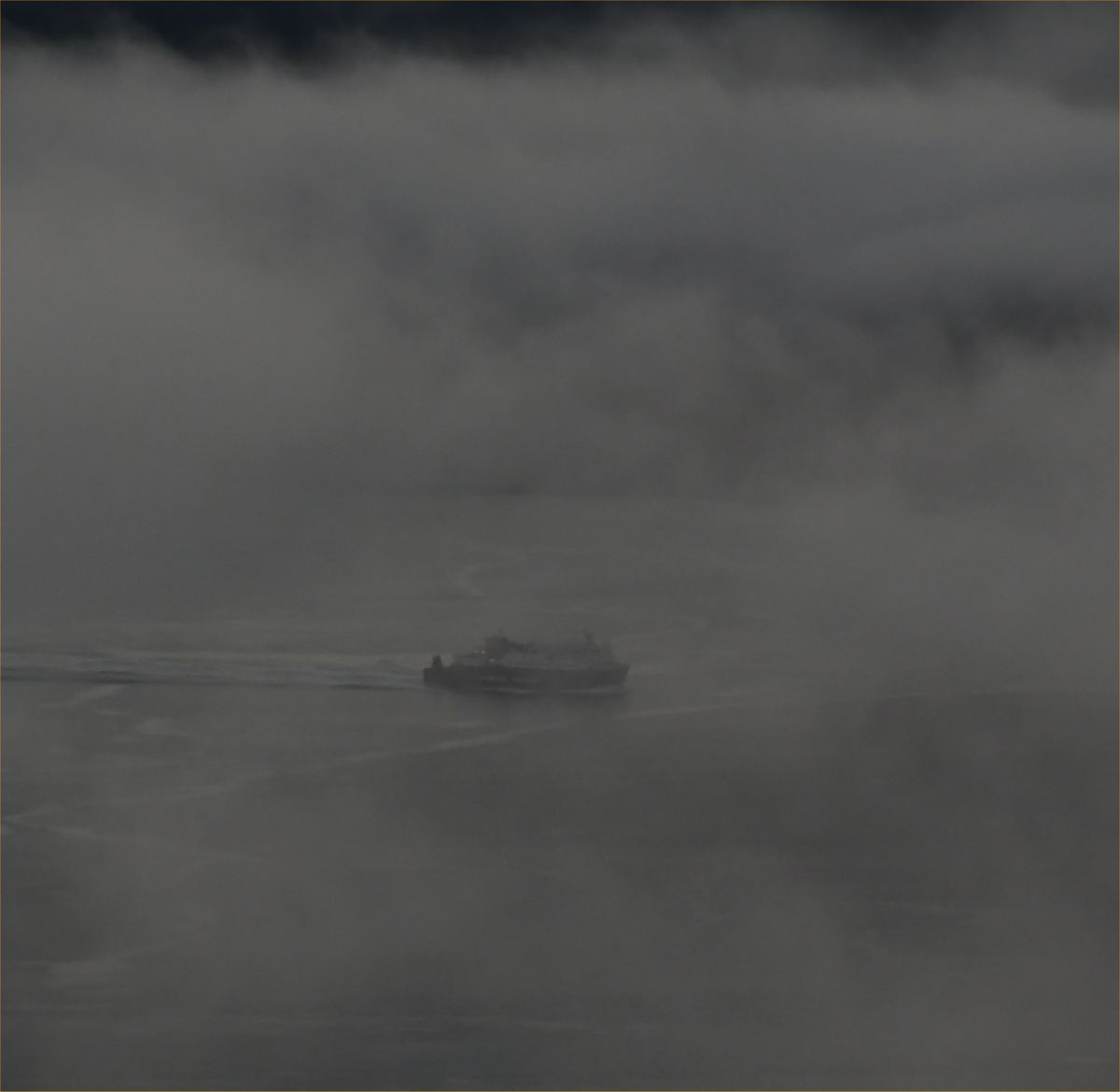 The view on ascent was fairly dramatic.
Sound of Mull: 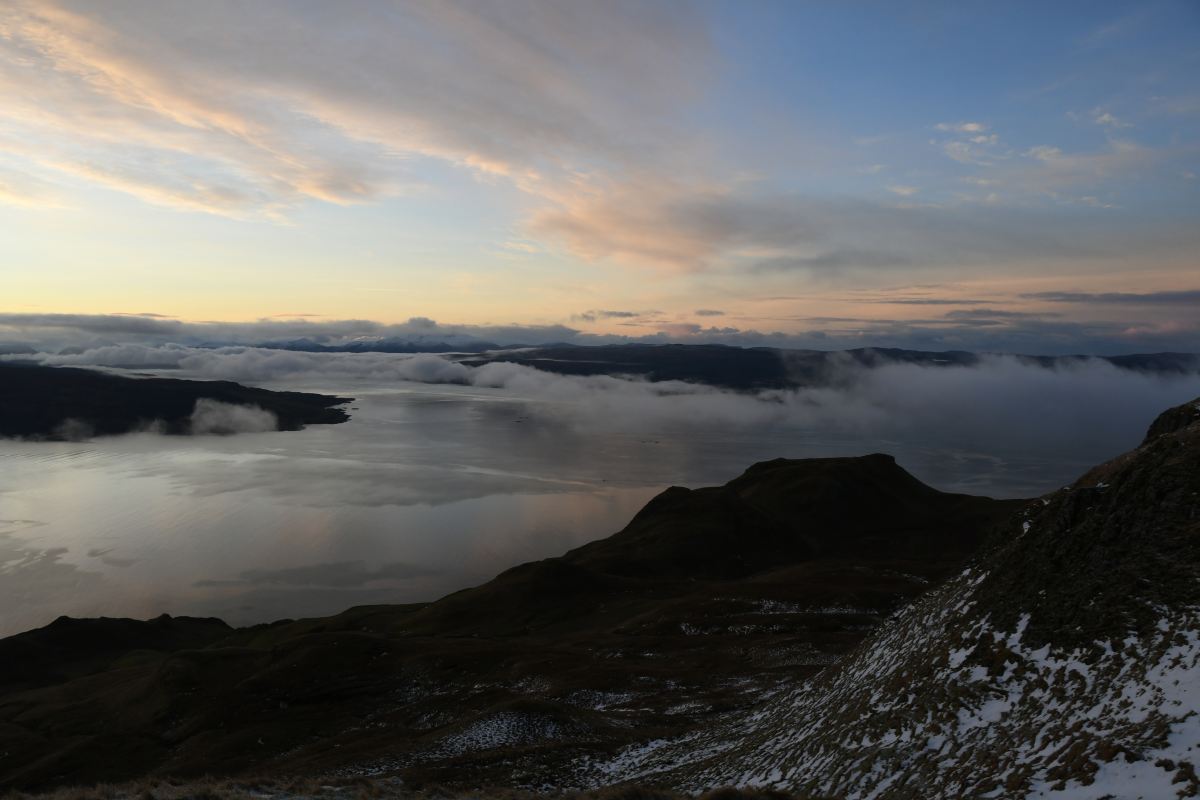 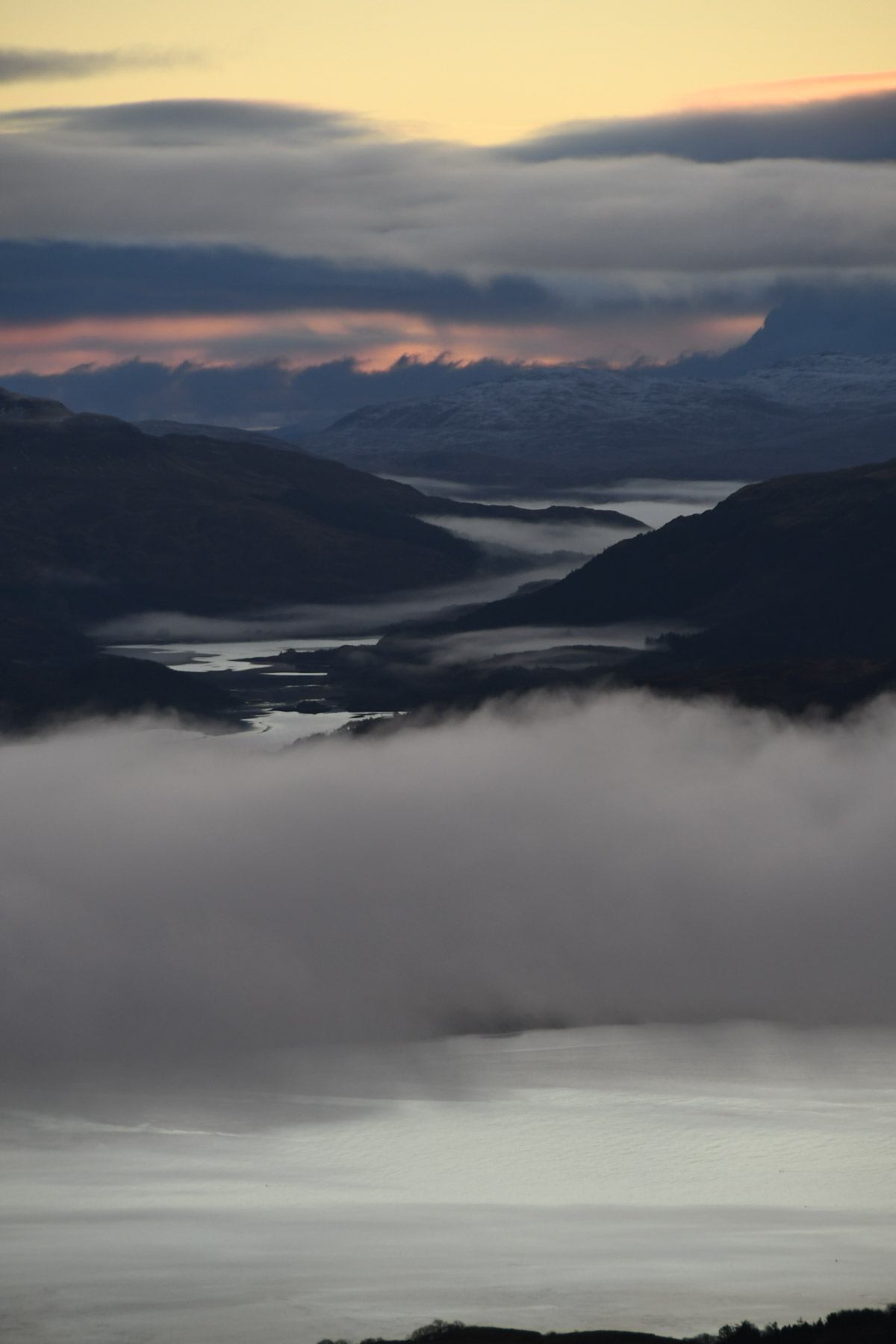 The sun broke the SE cloud layer as we were at the final 50m of ascent.
sunrise: 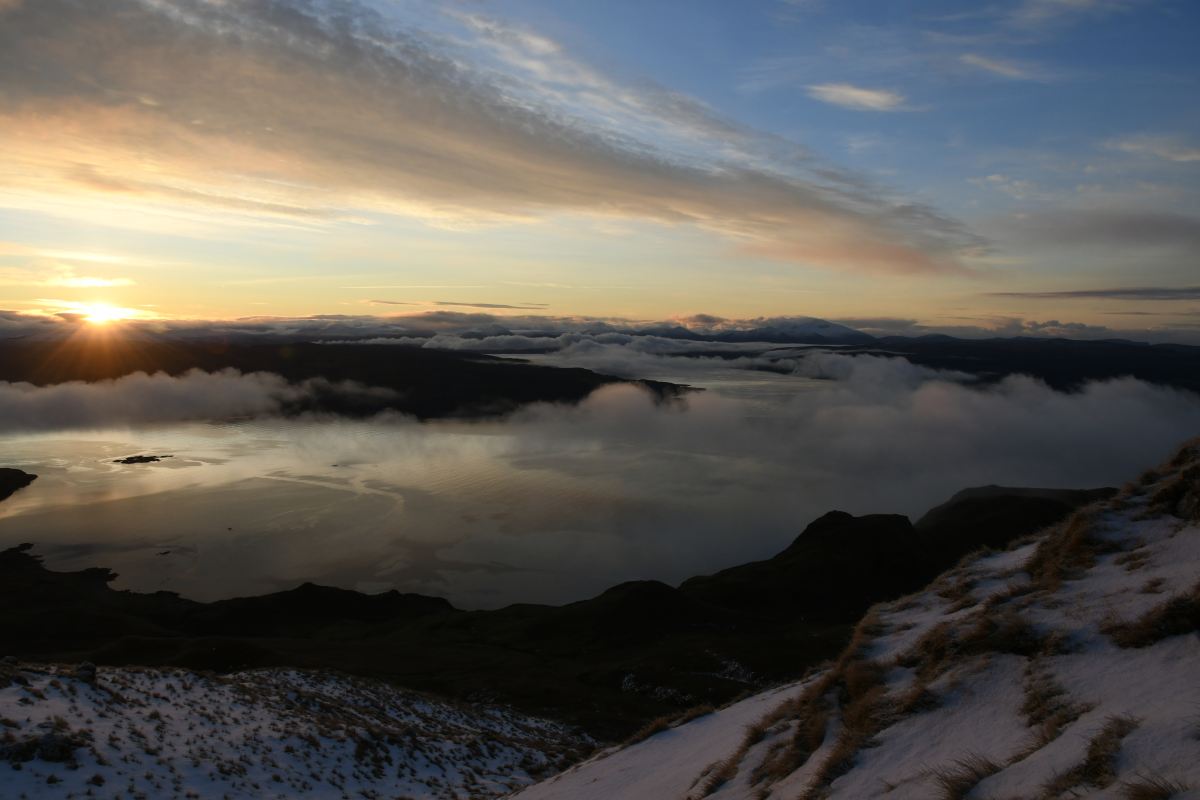 To the S Ben More was nicely snow-clad.
Ben More: 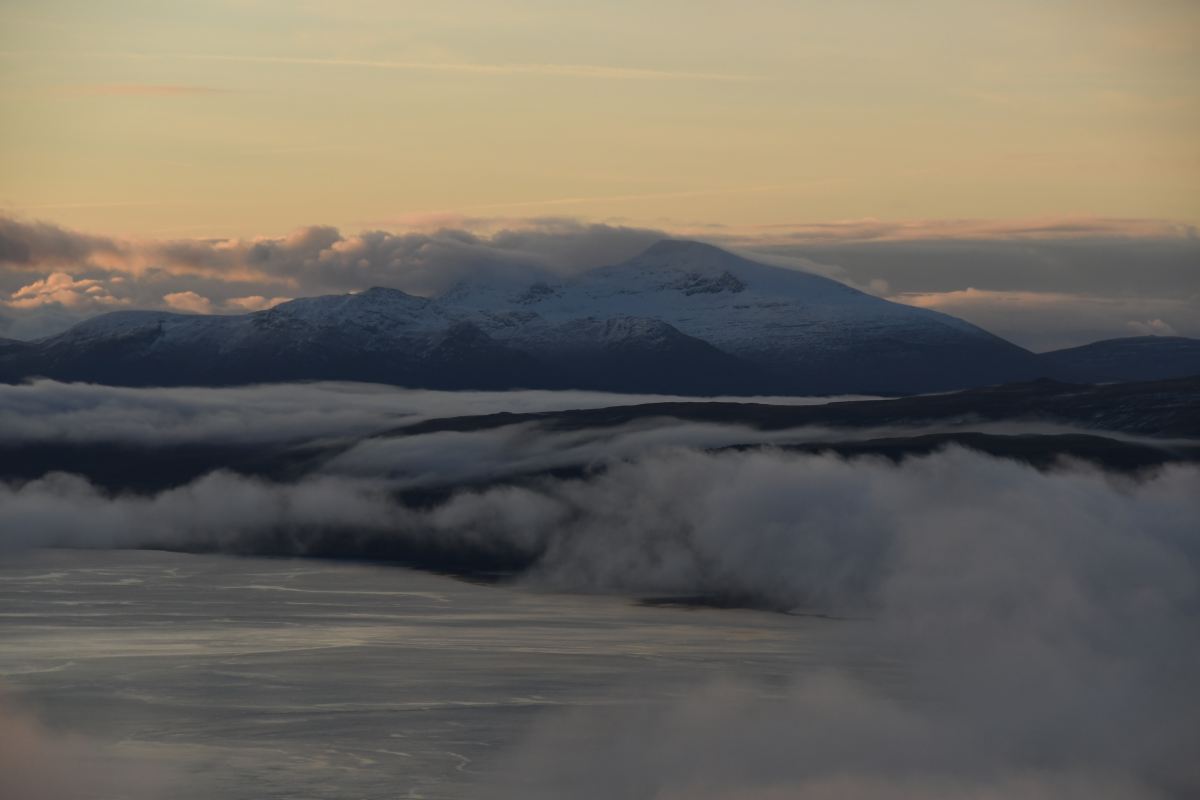 We had minimal snow at our low level, enough for decoration in the syrupy dawn light.
Sunlight on the hill: 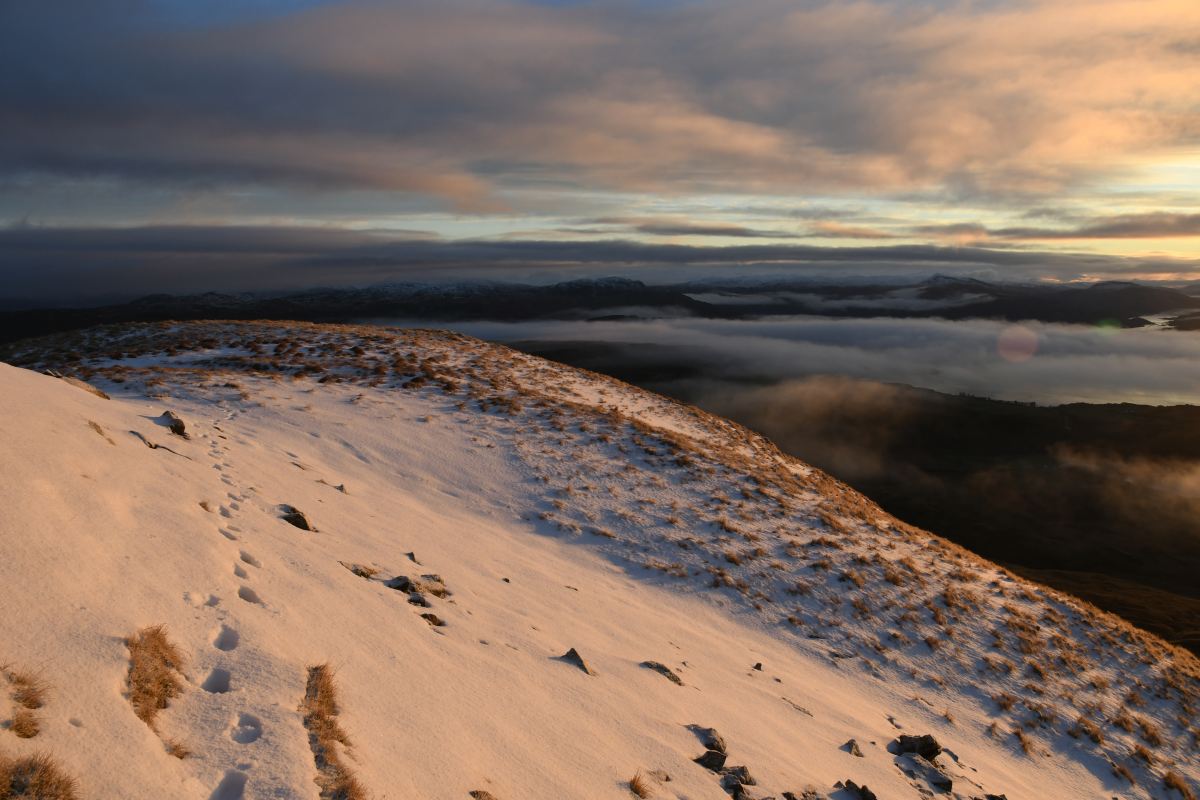 H on the hill: 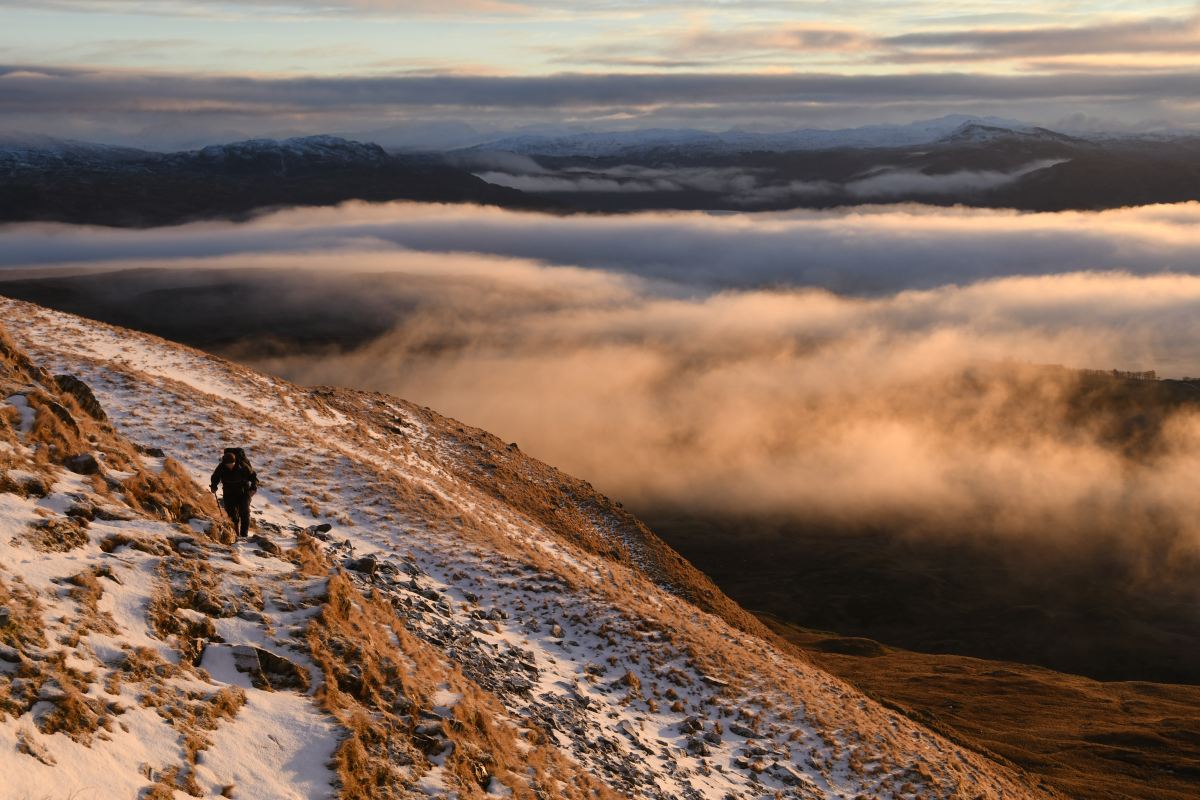 Once onto the west side of the summit there’s a nice view of the rim of the Arnamurchan Ring-dyke, the walls of a long-gone volcano.
Local hills: 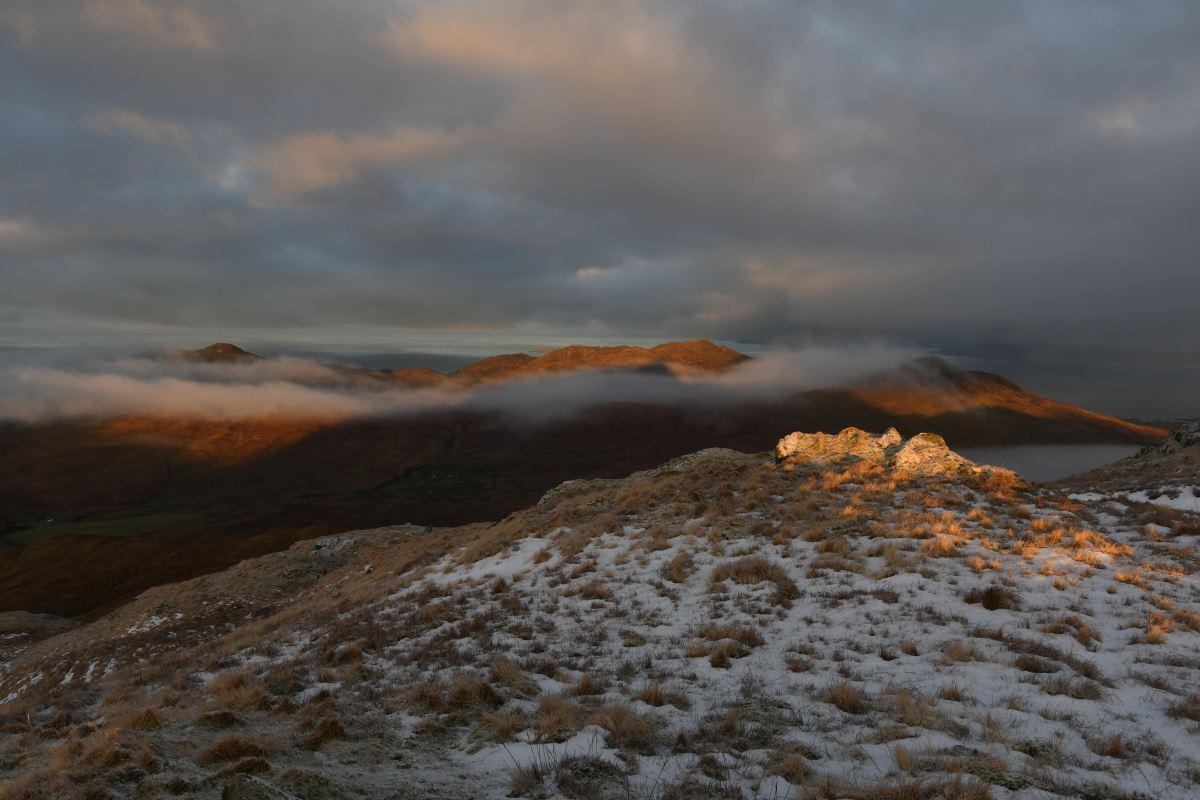 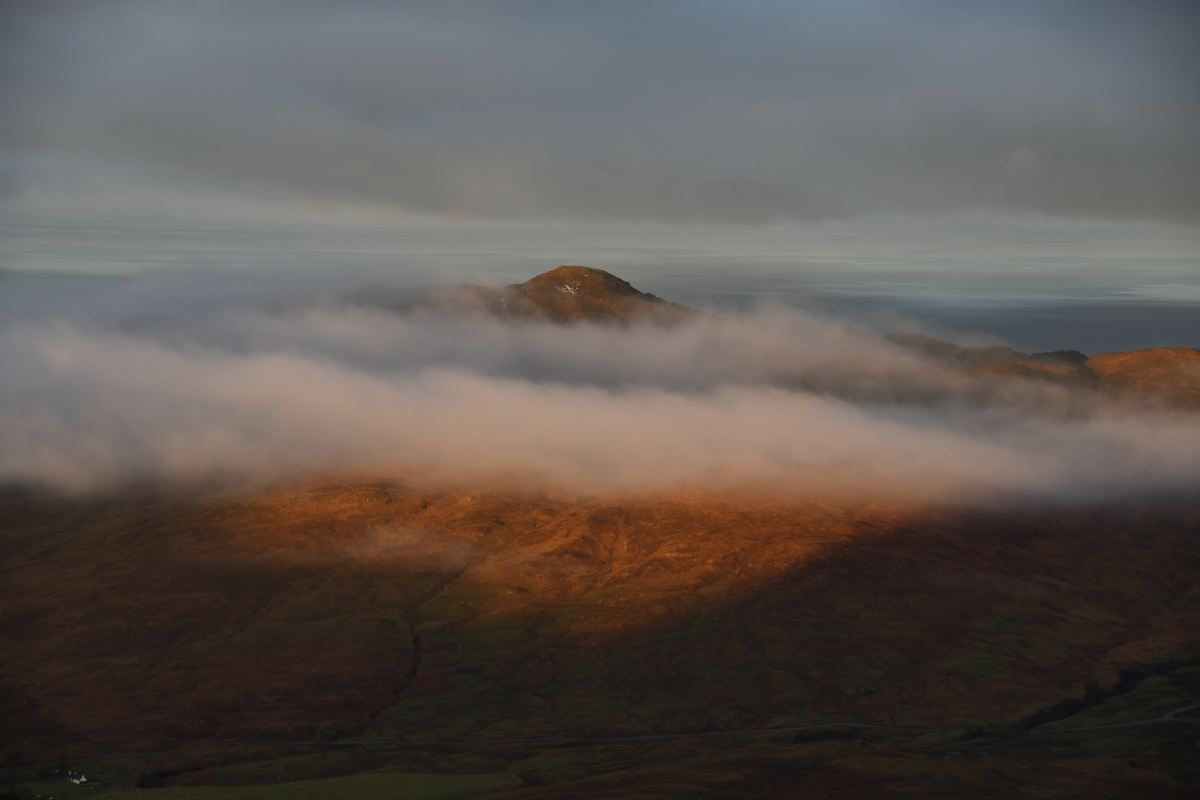 …and then to the summit. A great viewpoint for Mull, the Small Isles and the Outer Hebrides on a clear day. We camped here once and it is sublime.
Our views were a little more constrained, but still dramatic.
Ben Hiant summit: 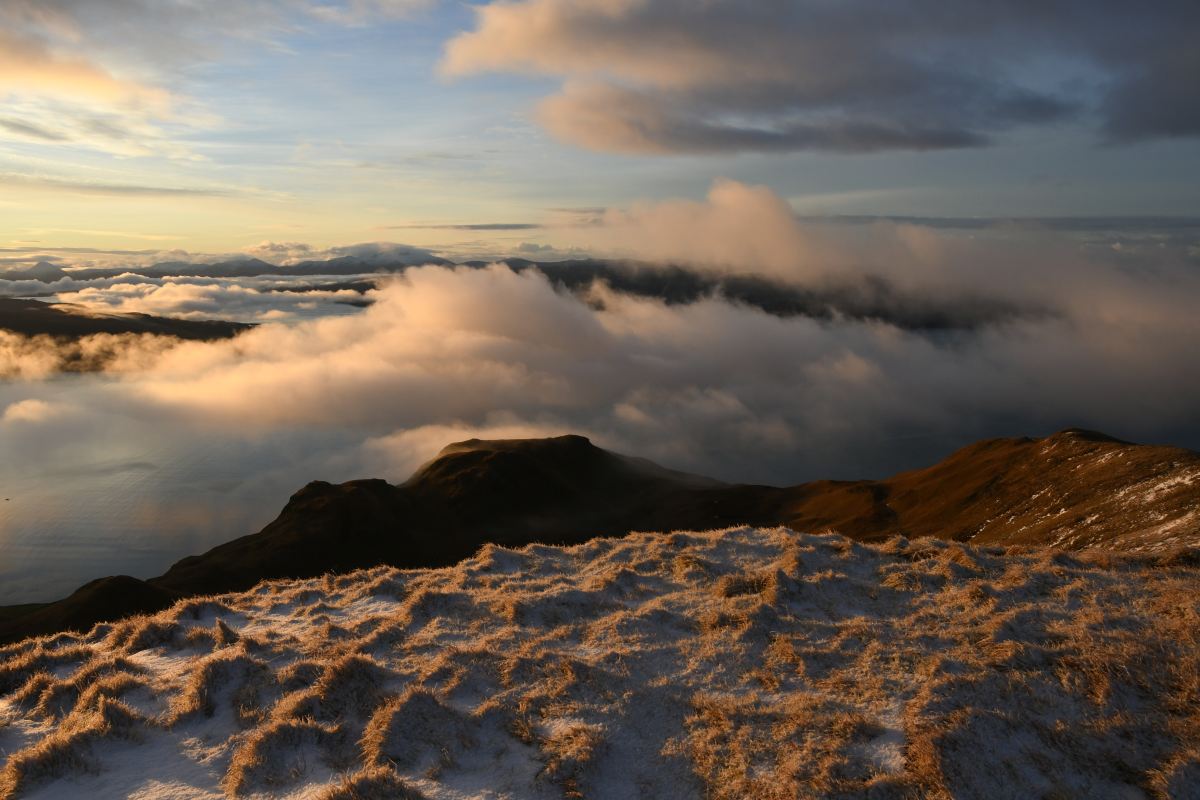 There was a smeared out glory around our shadow cast on Meall nan Con.
Summit shadow: 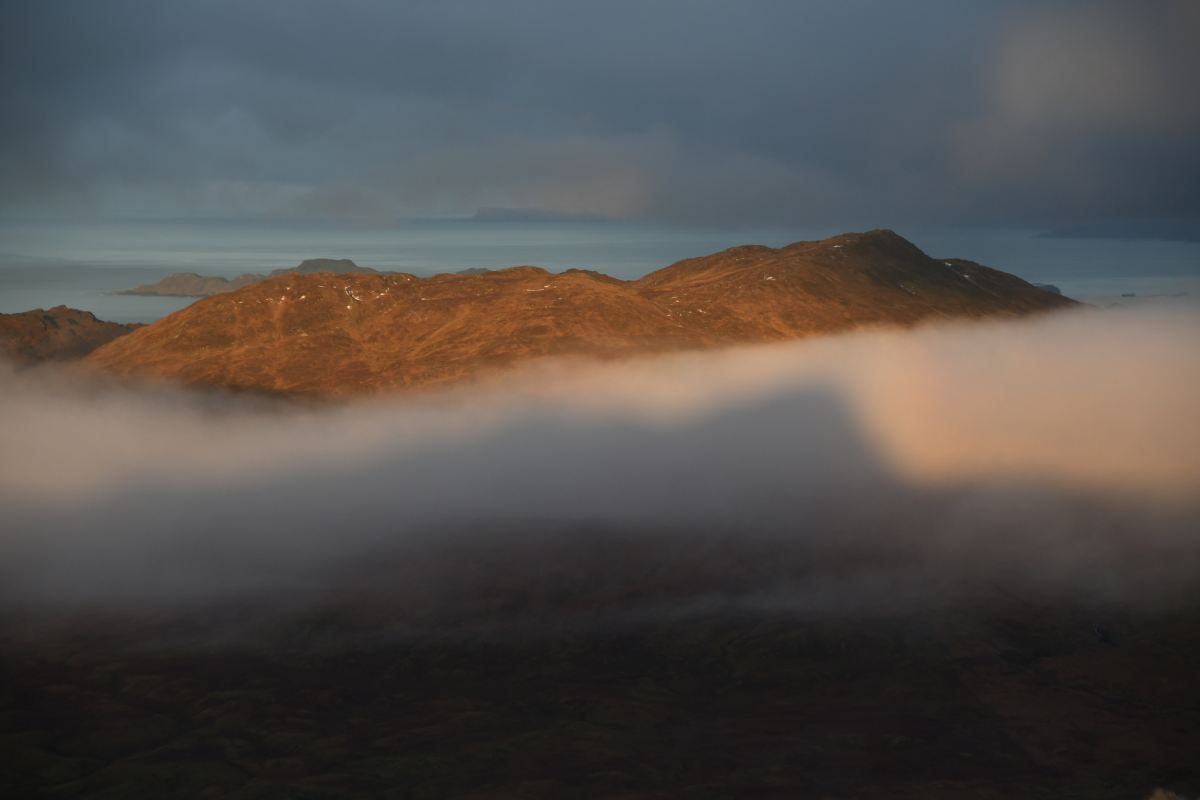 Well worth the drive and ascent for a rather characterful morning view.
South to the Sound of Mull: 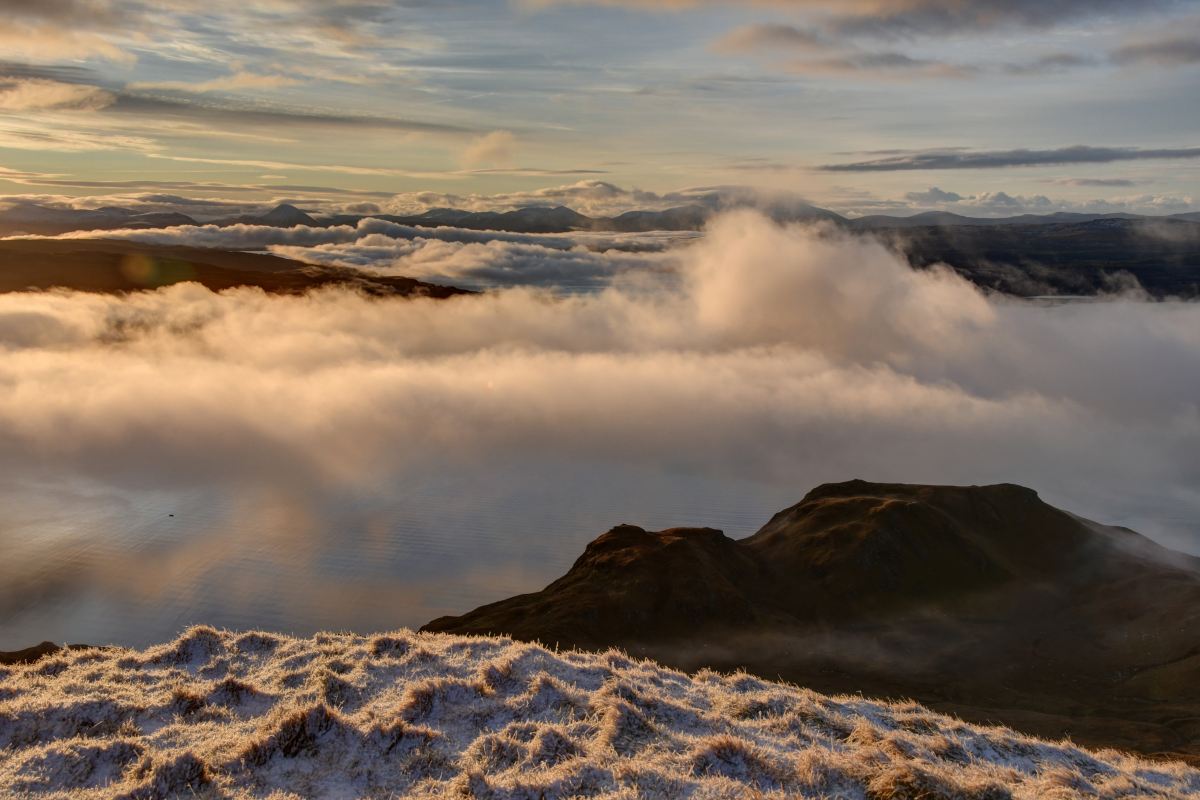 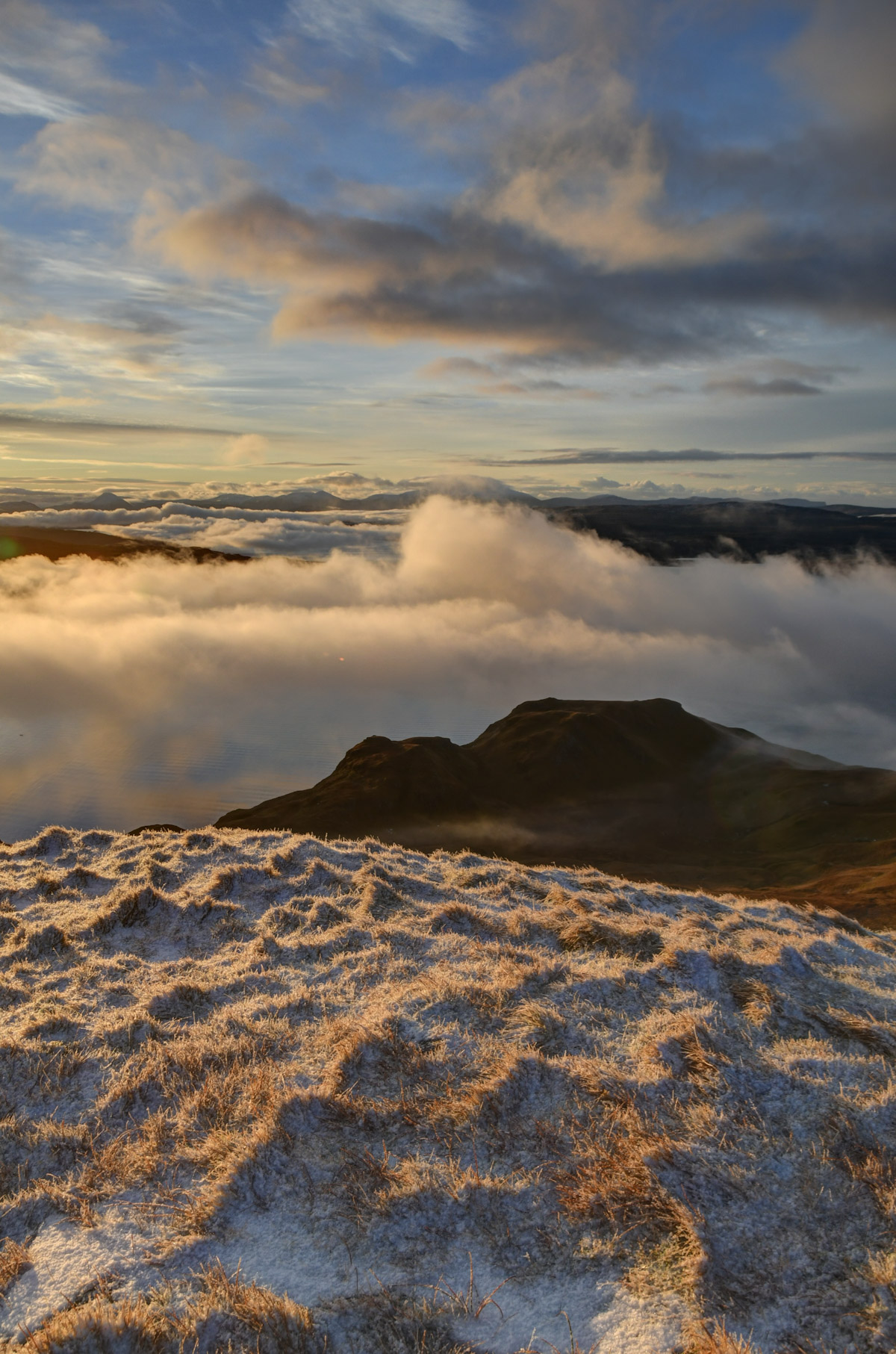 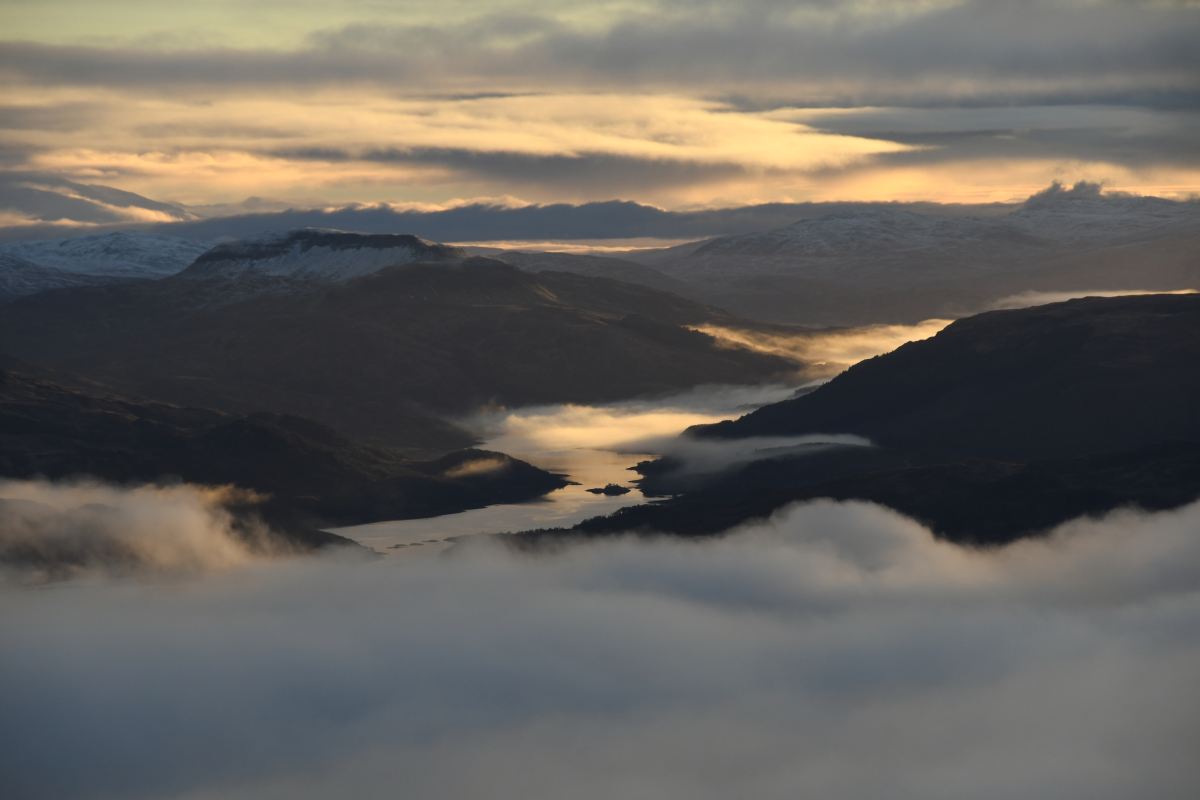 Had some late breakfast and watched the light changing.
Ben Hiant summit: 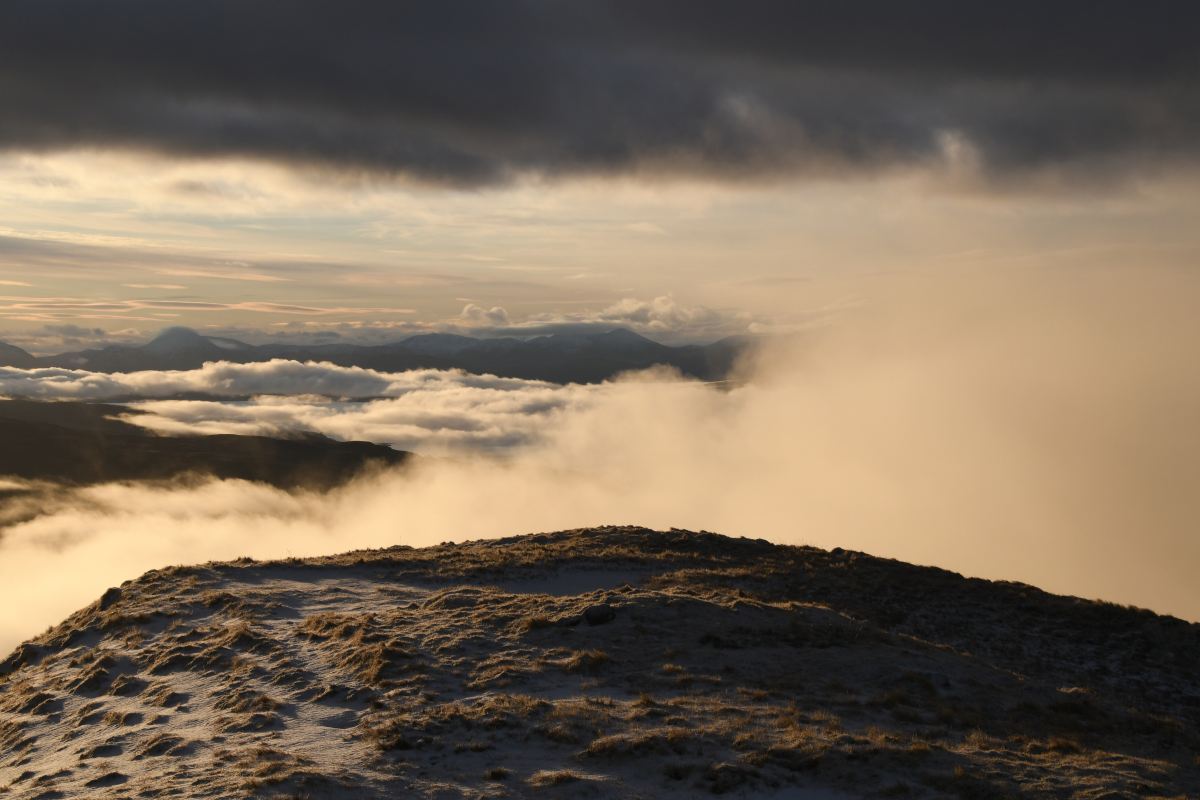 Clouds and light continued to shift.
Rainbow and hill fog: 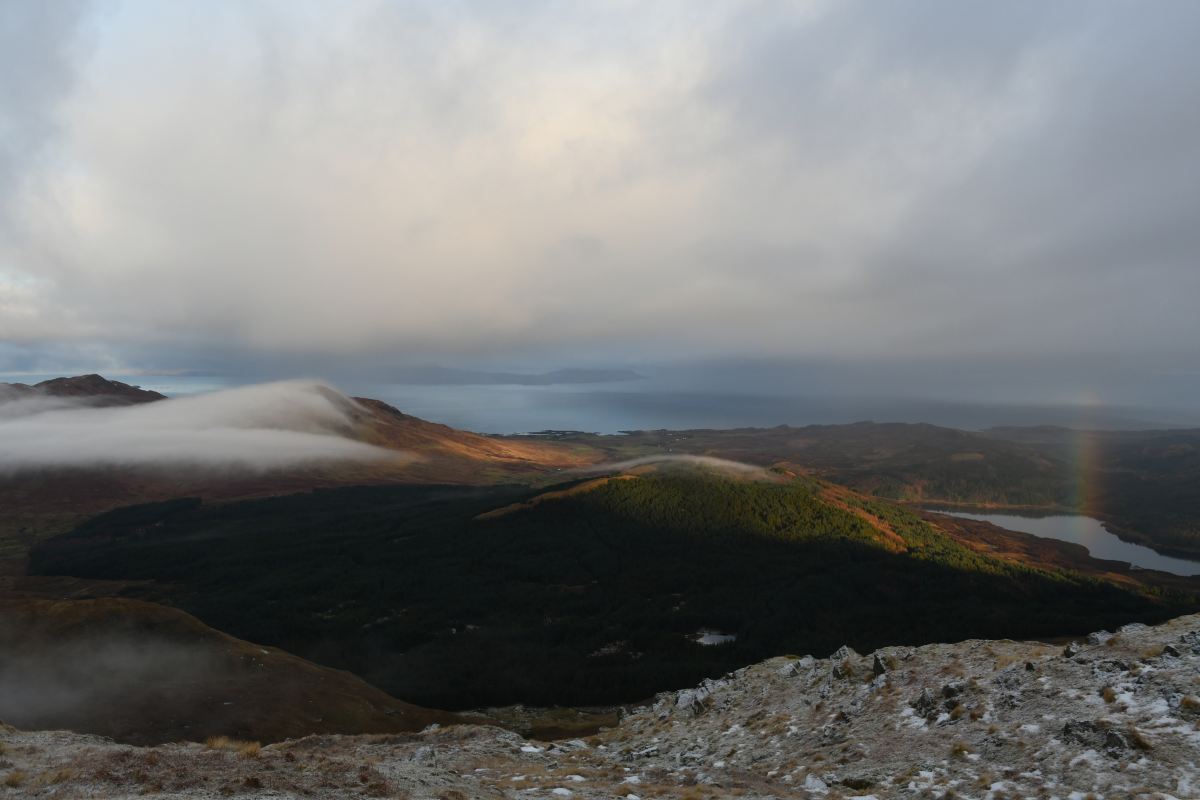 The wind turbine was protruding through the mist layer – almost photogenic.
Wind turbine on fog: 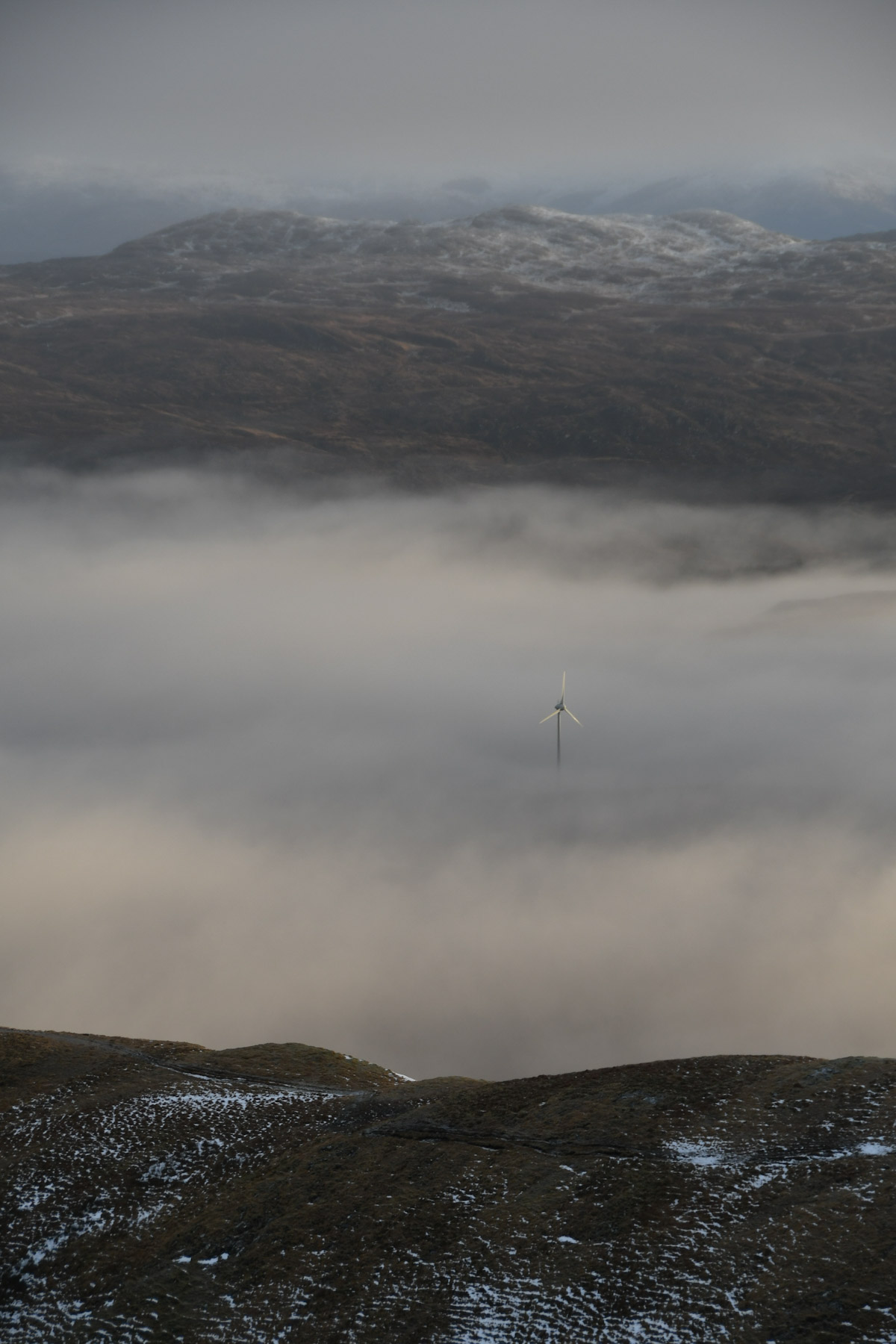 To the south Beinn Talaidh and Dun da Gaoithe were beginning to look like they were having a good day.
Down the Sound of Mull: 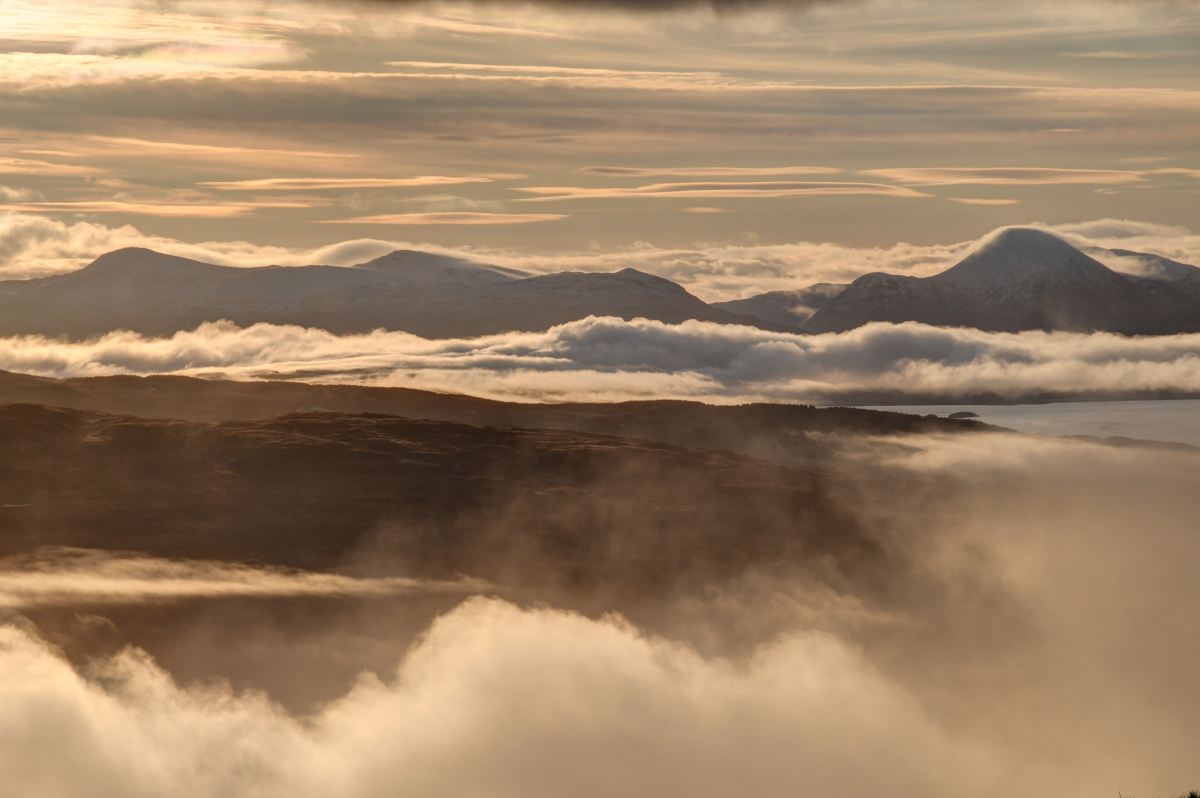 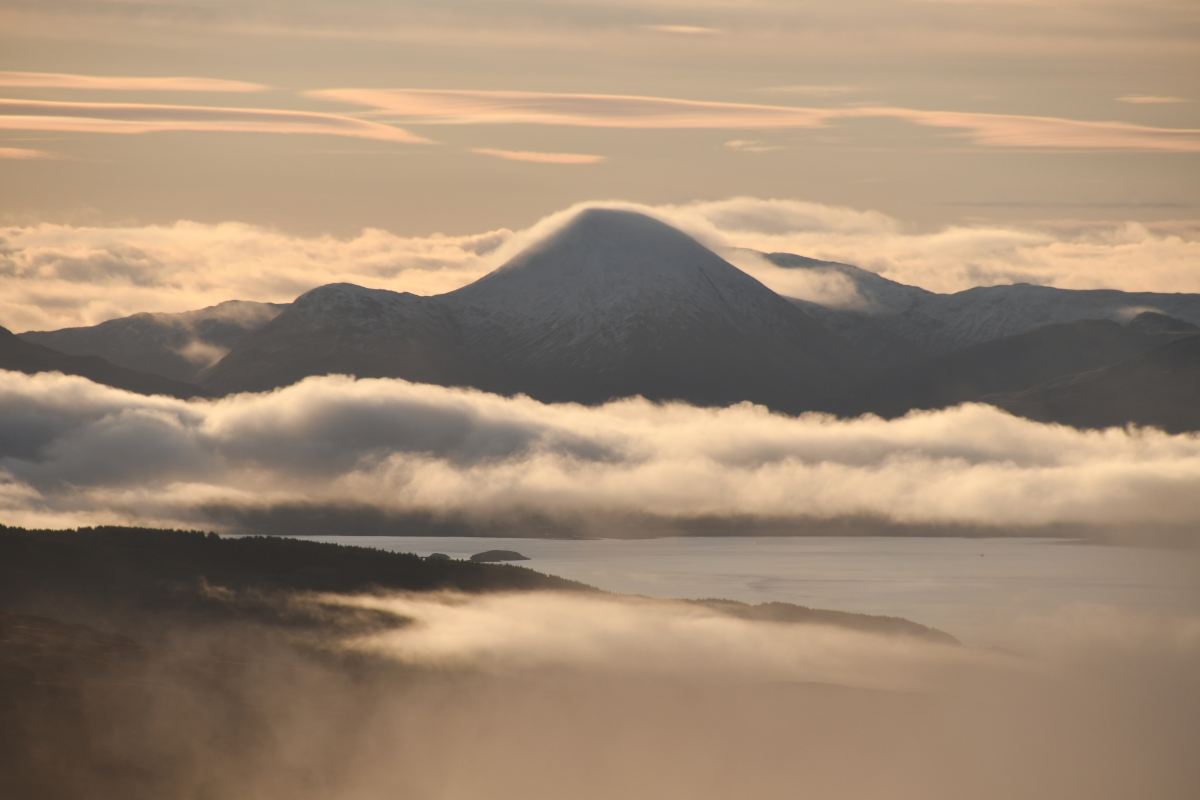 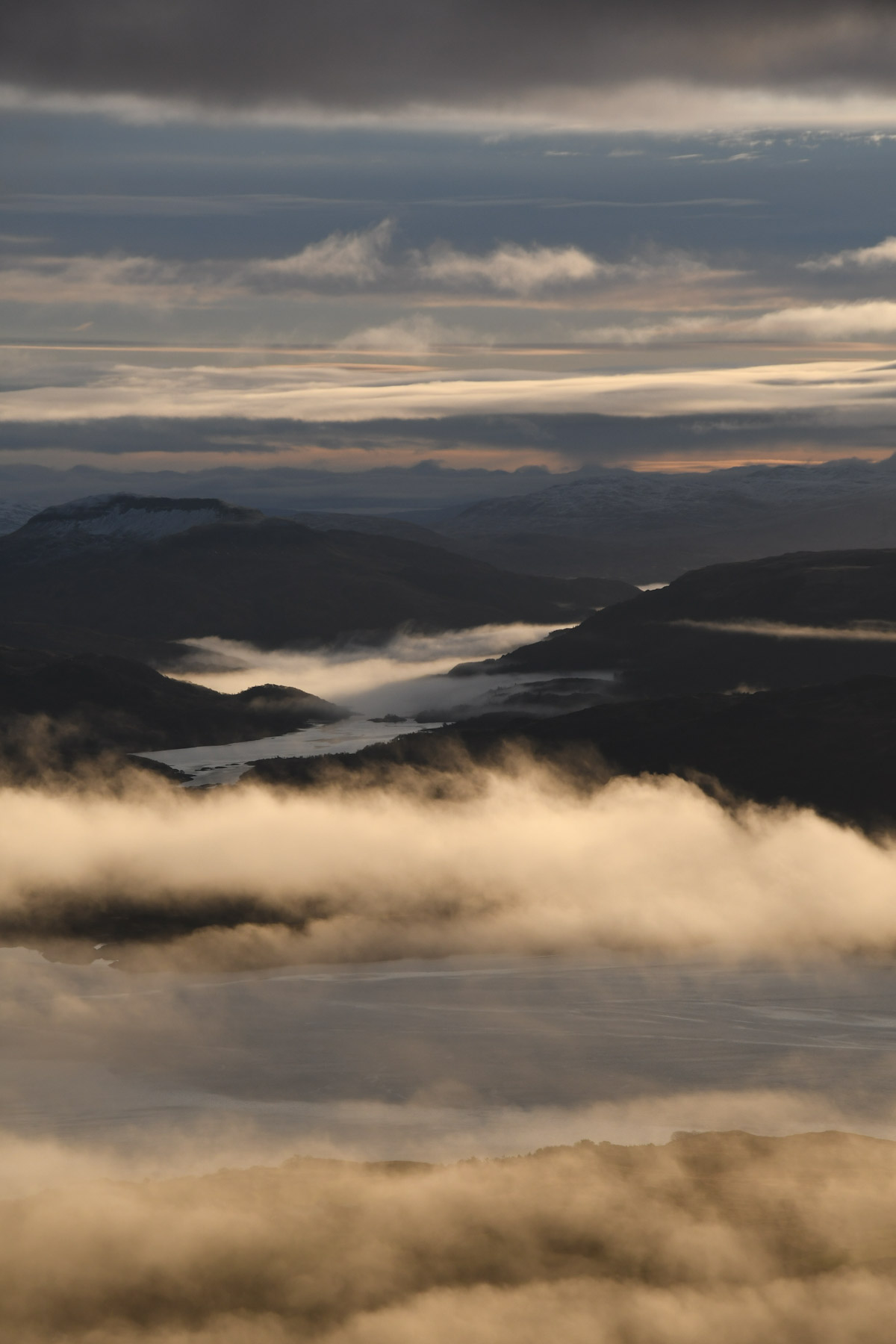 After an hour or so we started downhill. Just reversed route.
Meall nan Con fogged: 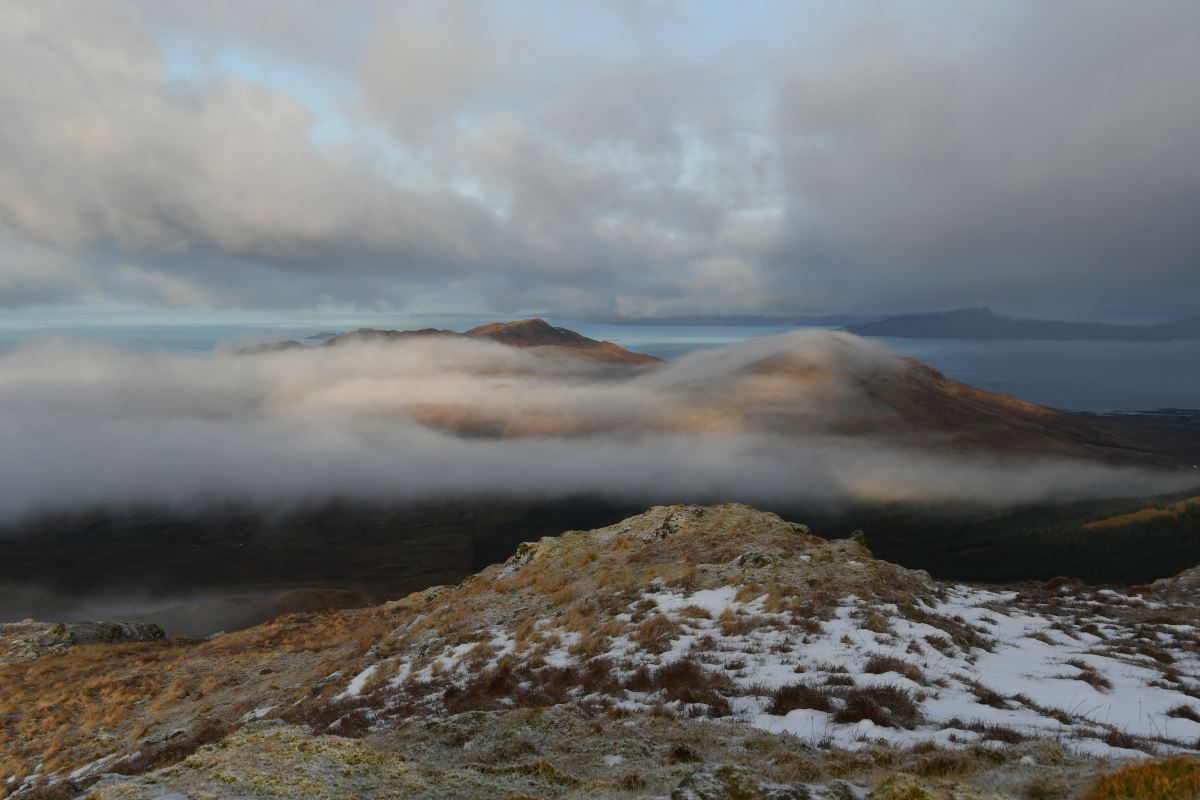 As we descended we were getting slightly better views north to the Small Isles – they didn’t clear for us though.
Eigg: 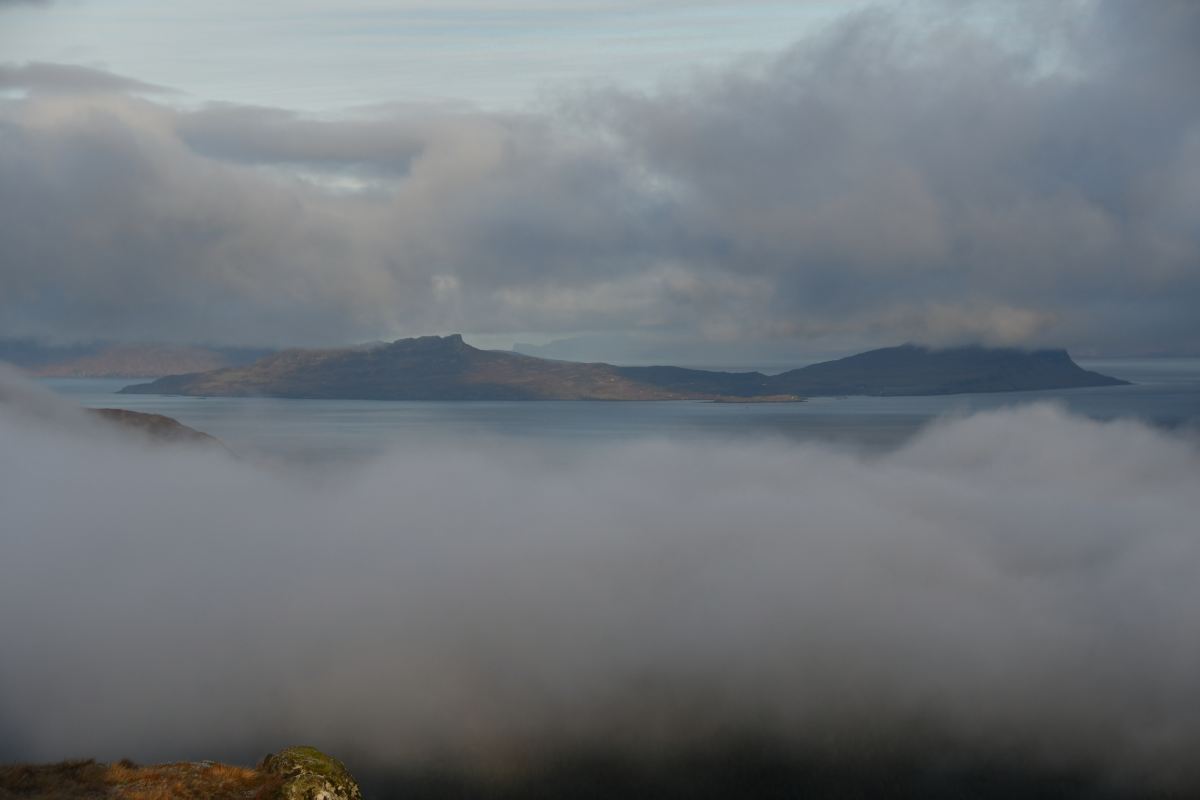 Hiant may be small – but it looks dramatic.
Ben Hiant summit from descent: 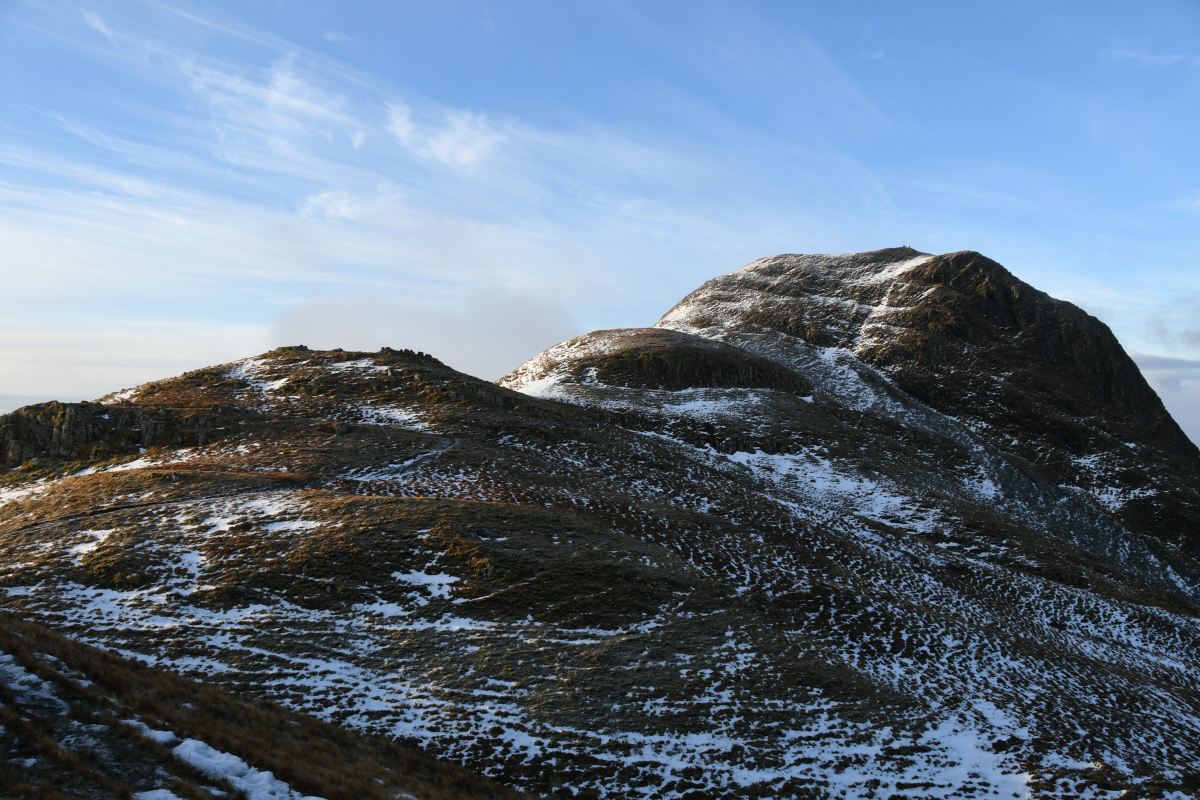 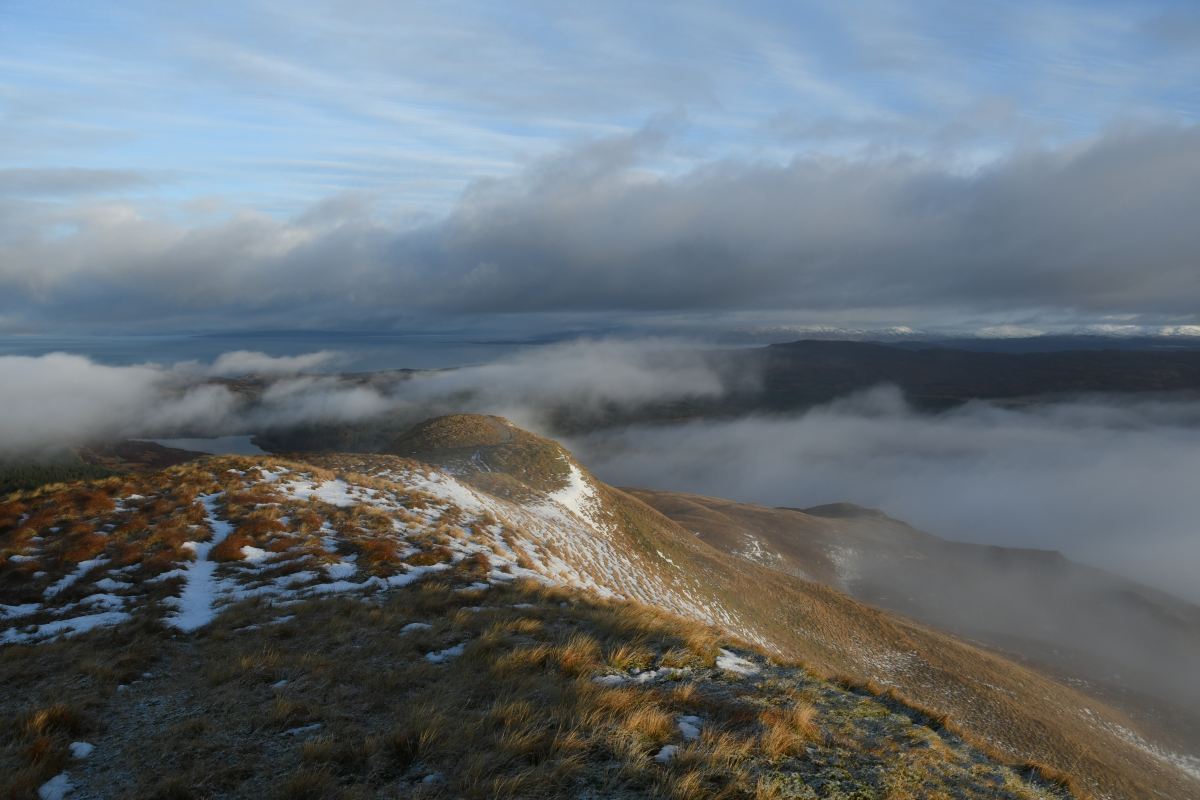 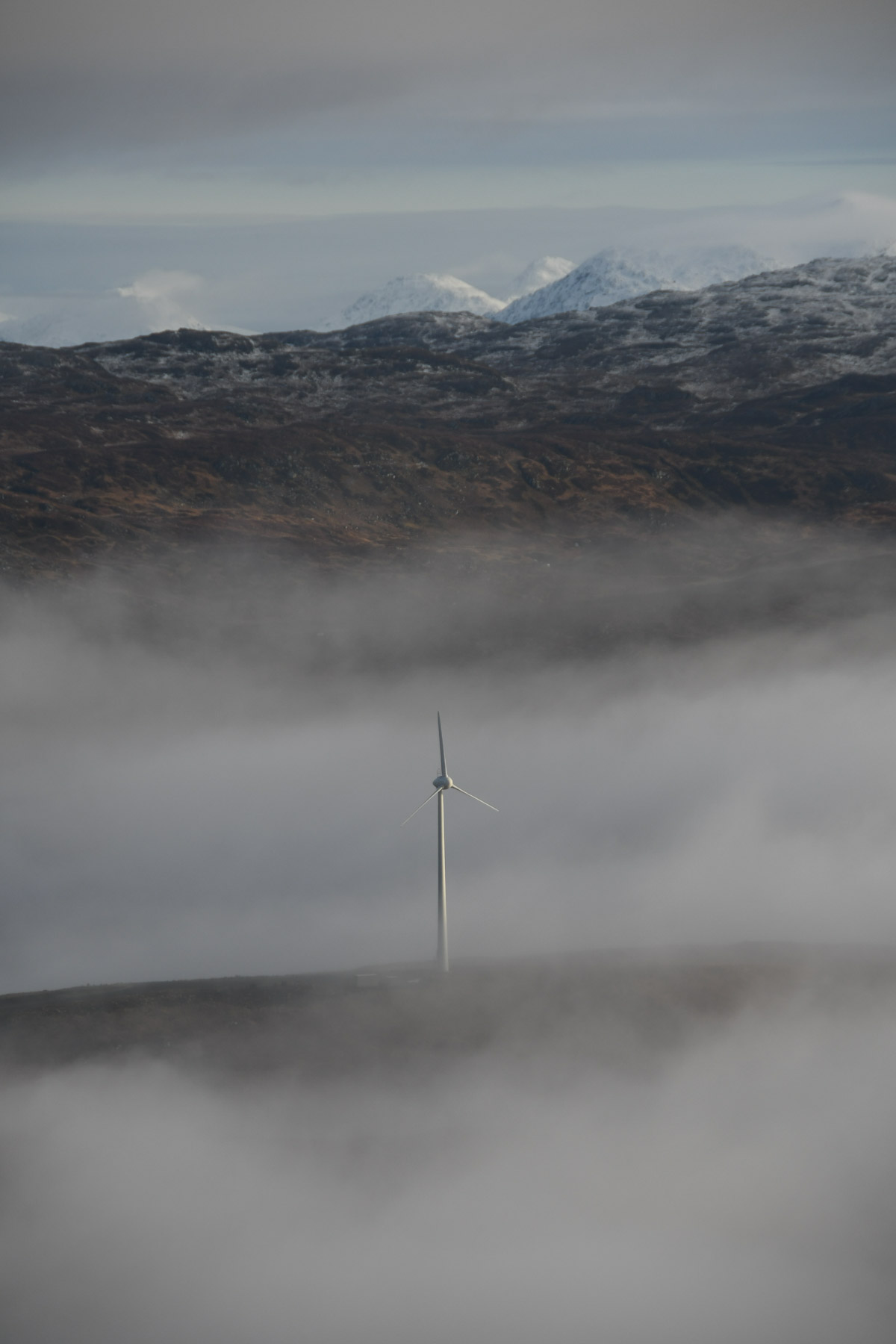 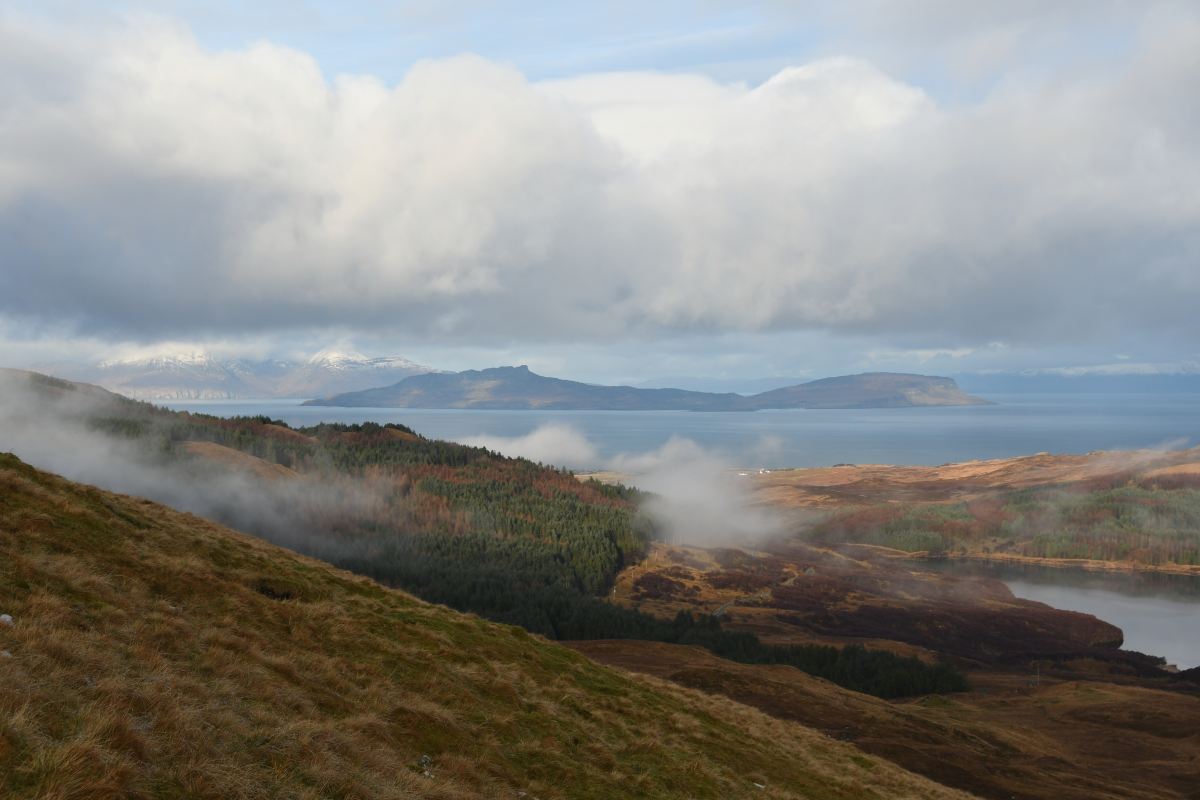 Back at the car we drove round to Kilchoan. Watched 2 adult Sea Eagles on the rocks off Kilchoan far a while – a fine distraction until MV Loch Tarbert arrived from Tobermory to pick us up.
MV Loch Tarbert: 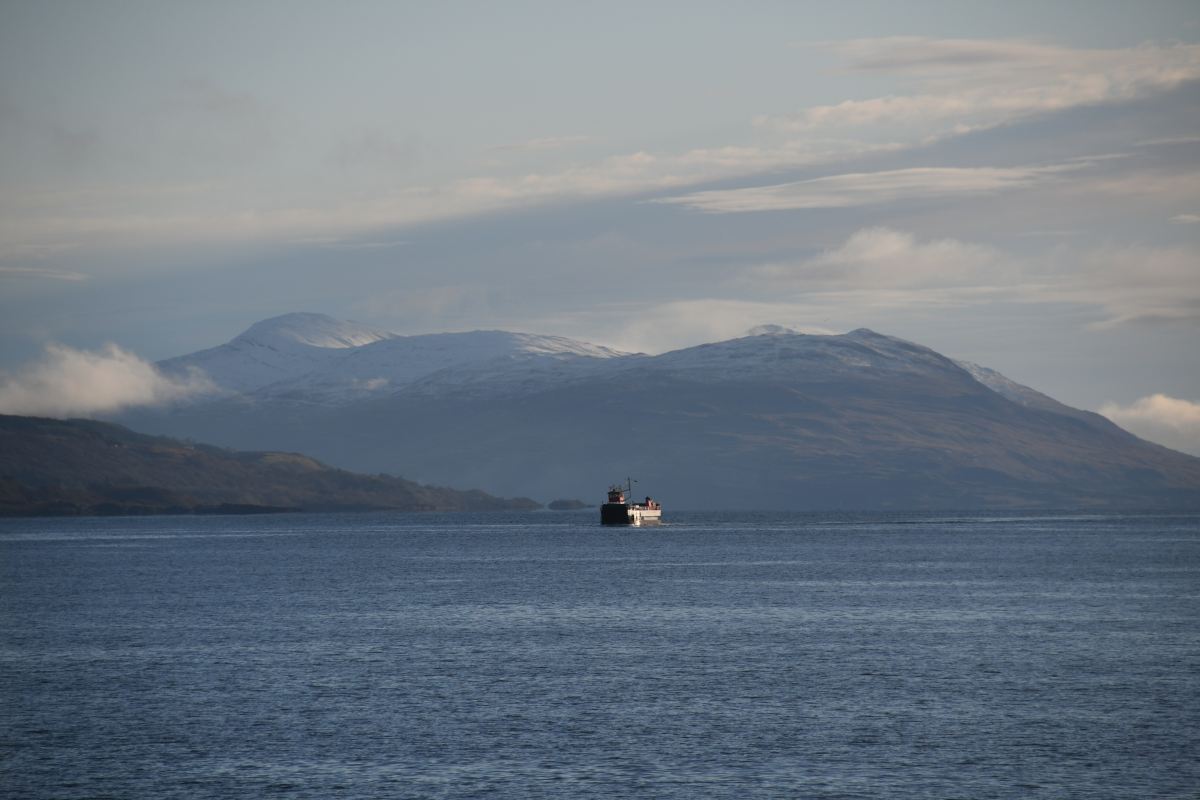 This worked well – it would have been nice to partake of the snow further inland, but getting out to the sea is always appreciated.