Saturday’s weather had been too windy for us to venture high, Sunday remained breezy, but much more manageable.

We decided to do a short wander up the eastern arm of Cairngorm. While the ski centre, Northern Corries and Cairn Lochan are always very busy, the arm of Cairngorm from Stac na h-Iolaire up Cnap Coire na Spreidhe is usually very quiet, despite commanding great views over Strathnethy. One of our go-to wanders.

Parked at the lower ski car park at 1000hrs and set off across the open ground towards Lochan na Beinne. Usually we follow the marked path, but on this occasion good firm snow cover meant a more direct line was possible. Microspikes were handy on the firm snow layer and we headed for the 737m point of the ridge which forms the western wall of Strathnethy. 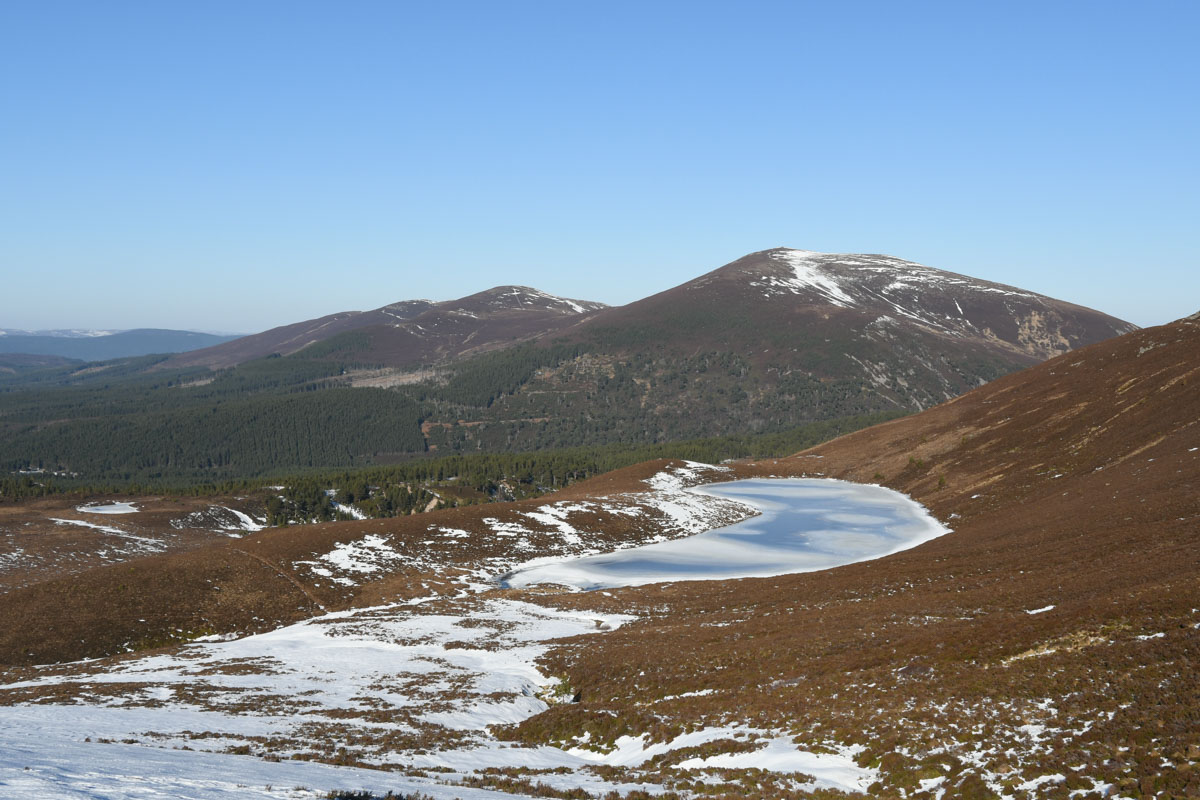 A nice day, little wind on this side of the hill and the warmth of the sun was palpable. 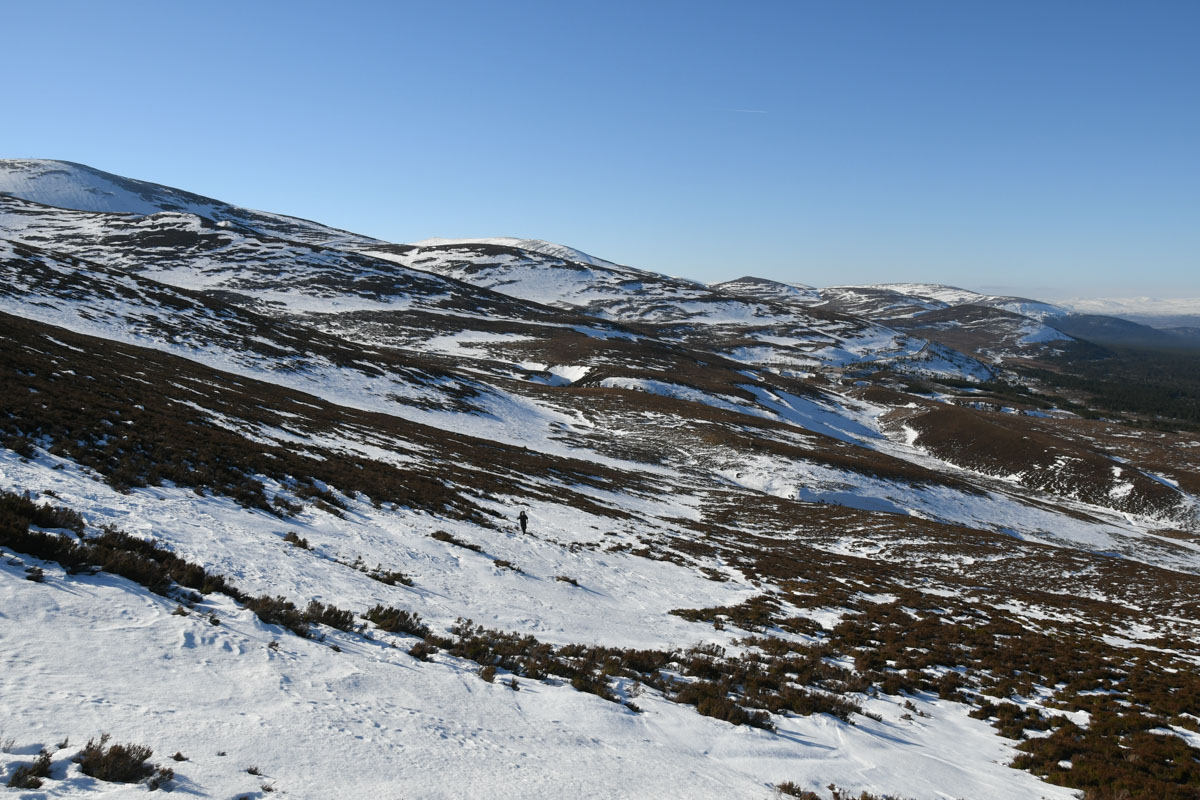 Once on the ridge proper we considered changing to crampons, but in reality the snow was partial on the ridge and we were able to stick to the edges of snow/bare ground through the steeper bits and crampons were not needed. 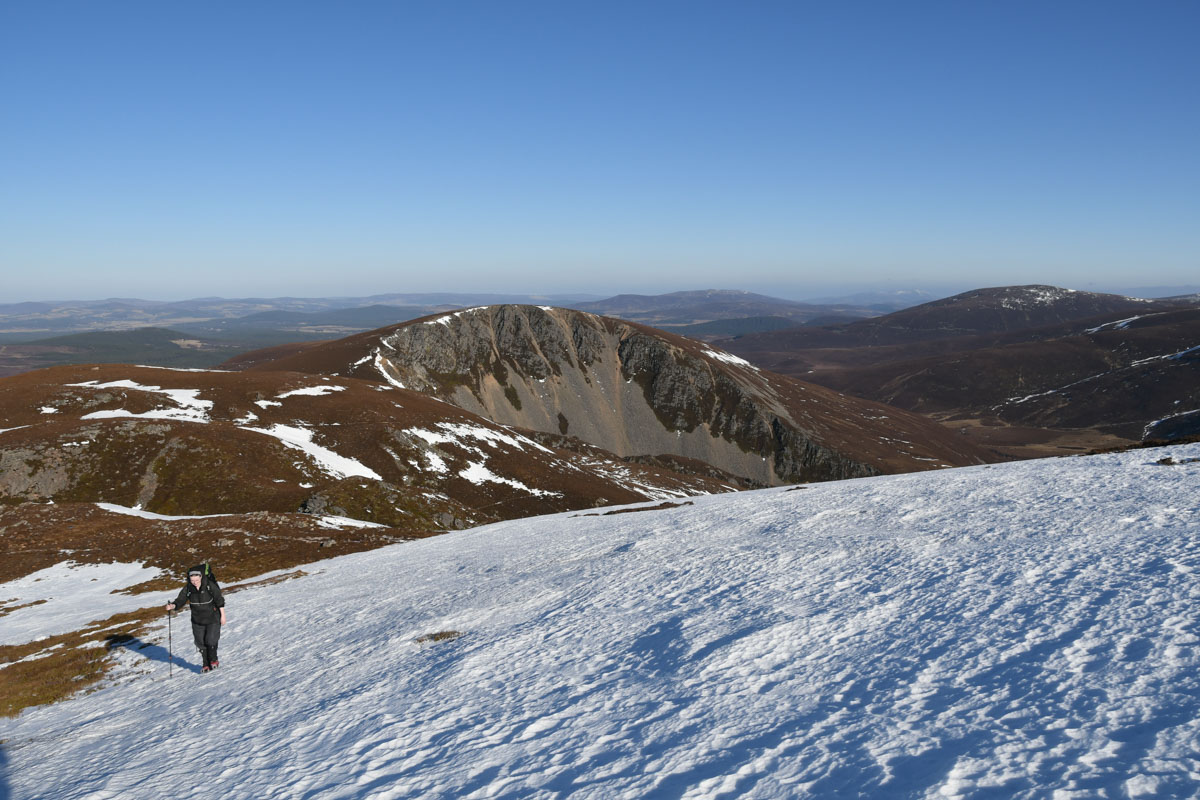 Took a rather slow bimble up to the 1028m point, where views open up to the south and east, although cloud was shrouding much of the hills in that direction. 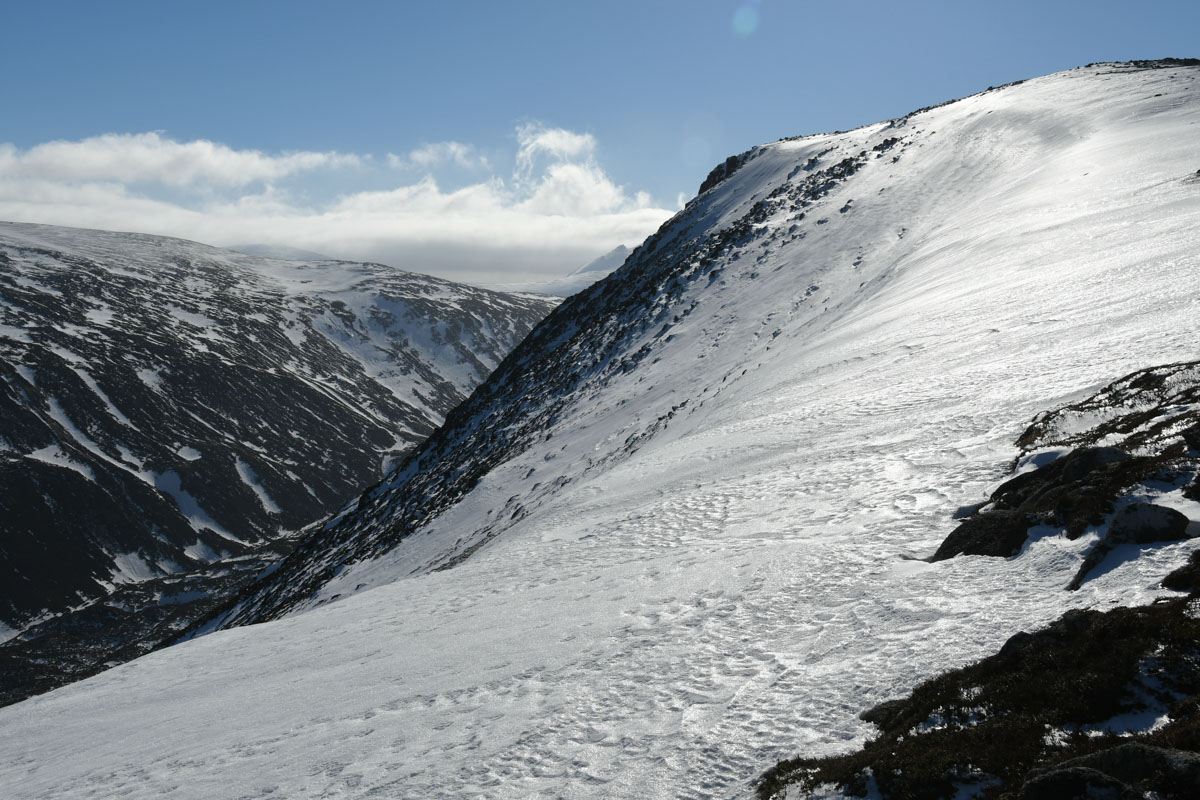 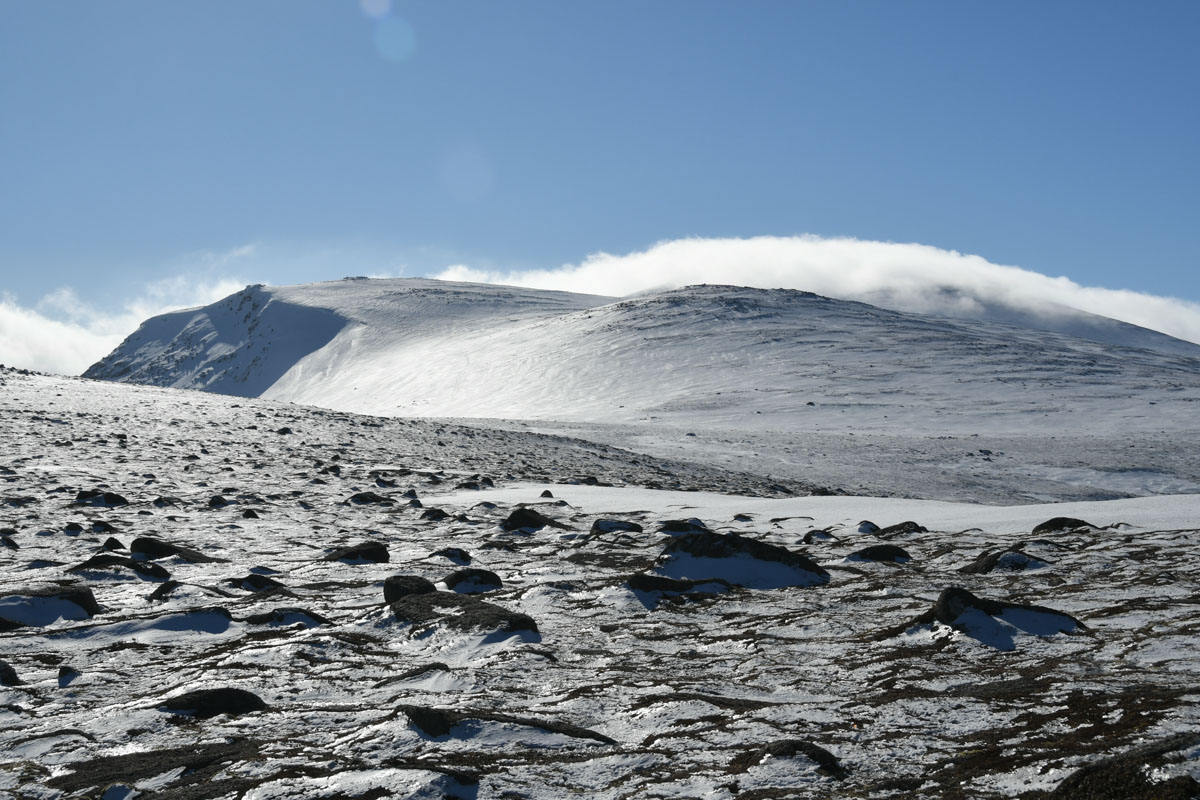 The summit of Cairngorm and beyond looked rather clouded from here, and the cutting southerly very noticeable. 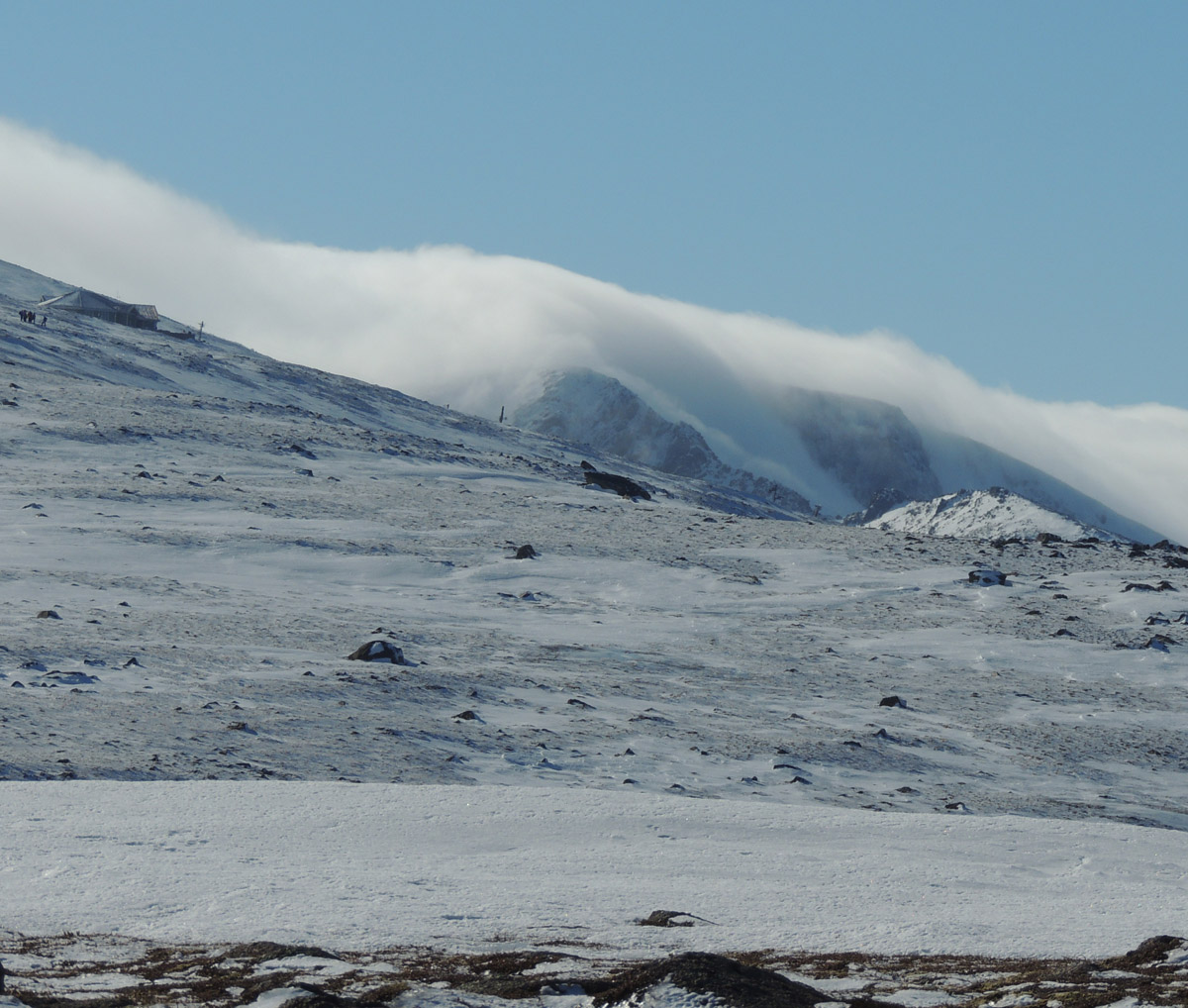 Beinn Mheadhoin was part visible to the left of Cnap Coire na Spreidhe: 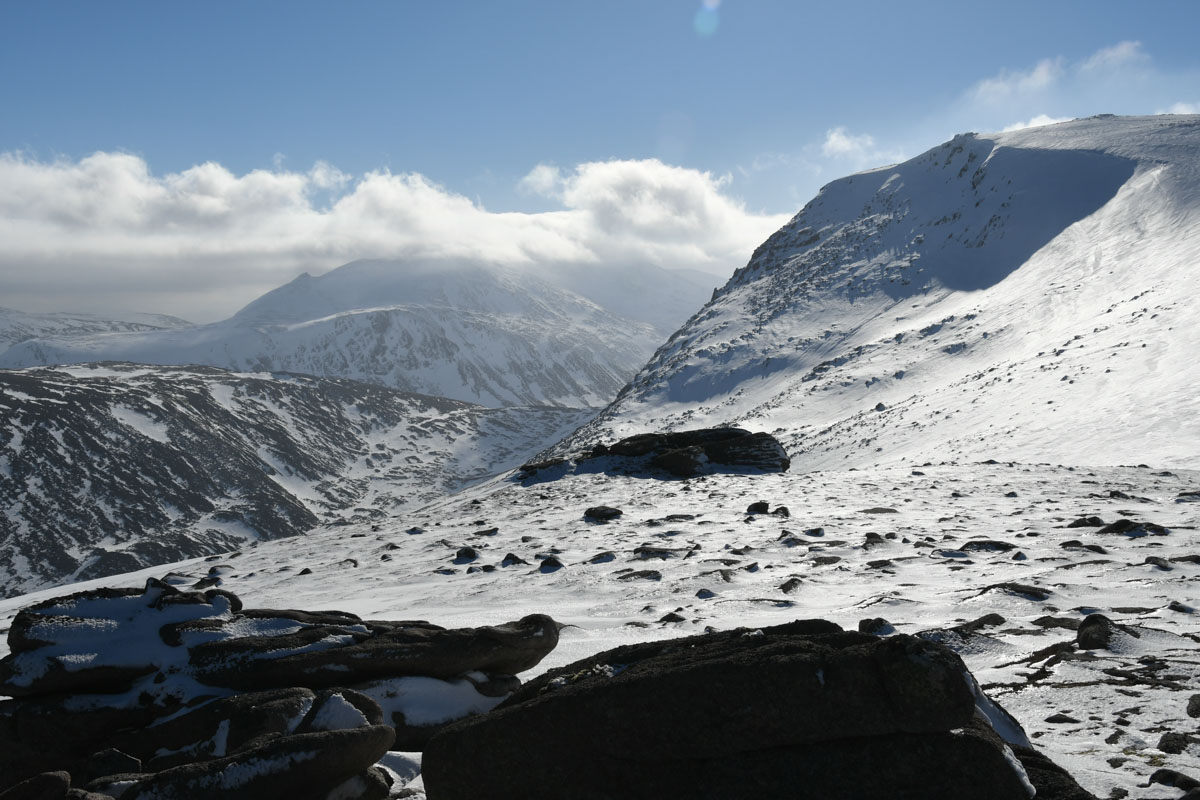 Carried on up to Cnap Coire na Spreidhe, finally spotting some ptarmigan on the way. 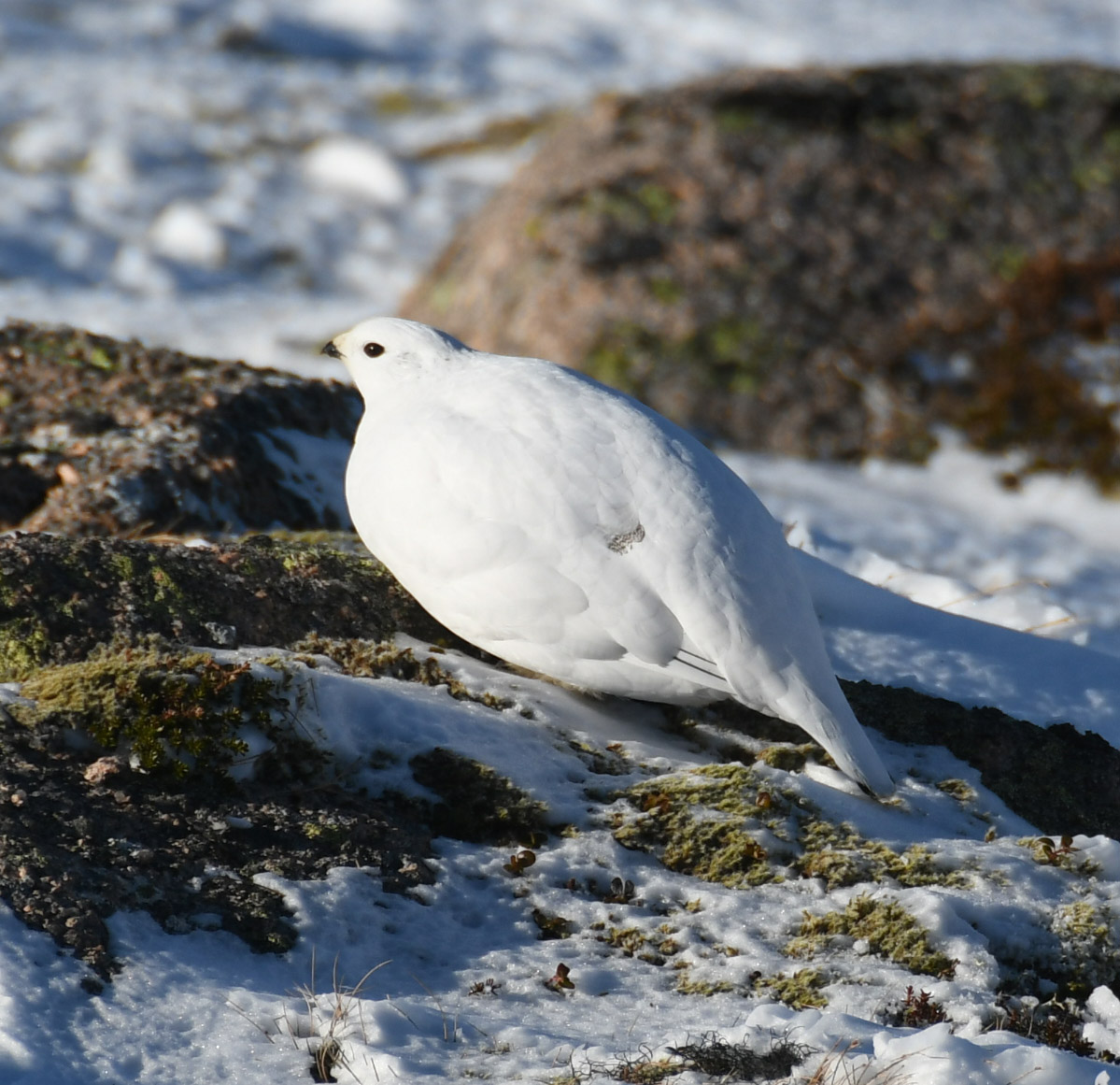 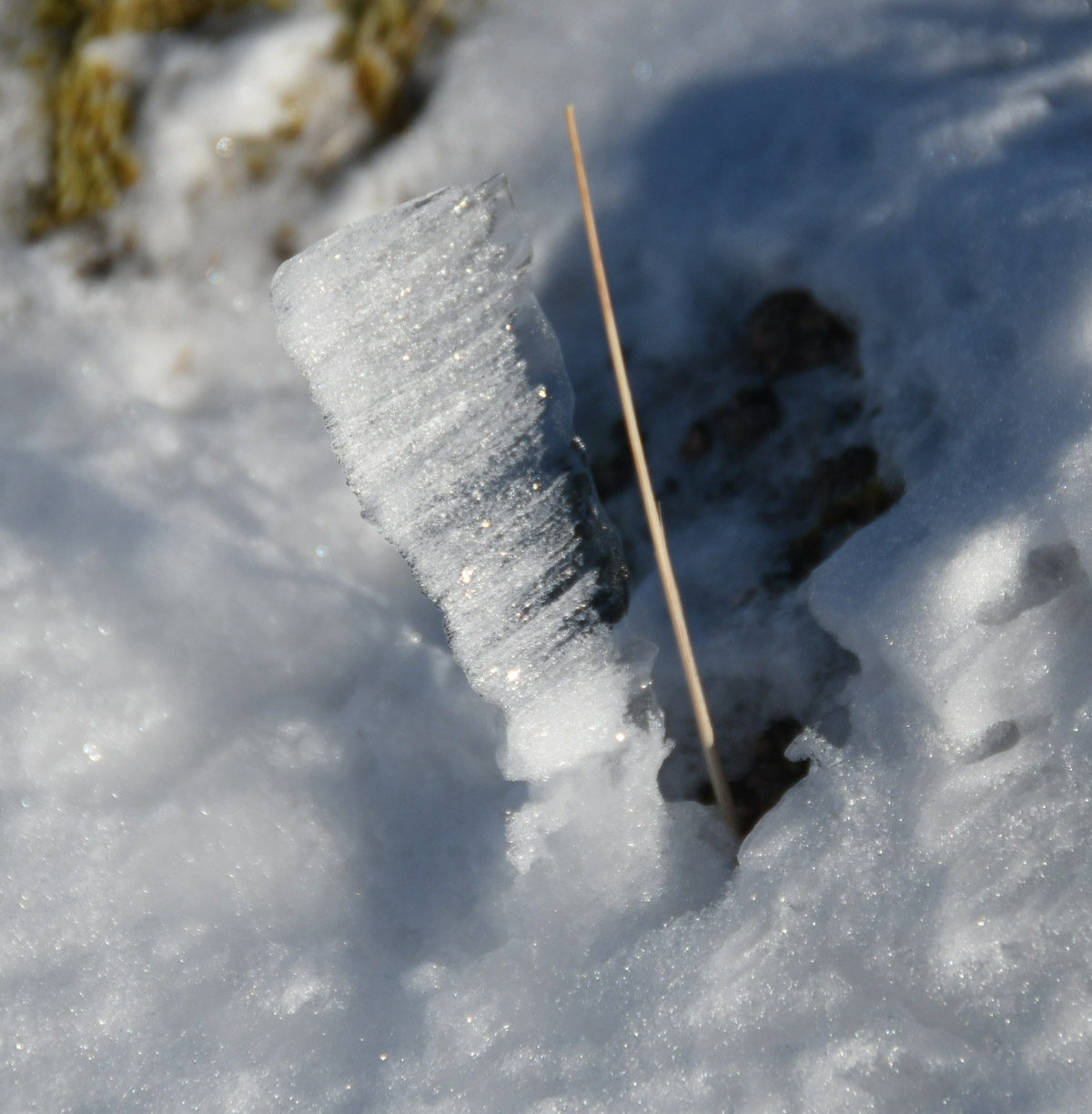 Got into the lee side of a rise and had some lunch. The summit of Cairngorm was looking clouded so we decided just to head down from here. Stuck on the crampons for the descent.

Prior to heading we took a look at Ciste Mhearaid – one of the areas of persistent snow patches into the summer. Lots of people here doing winter skills and a number of snow holes visible. 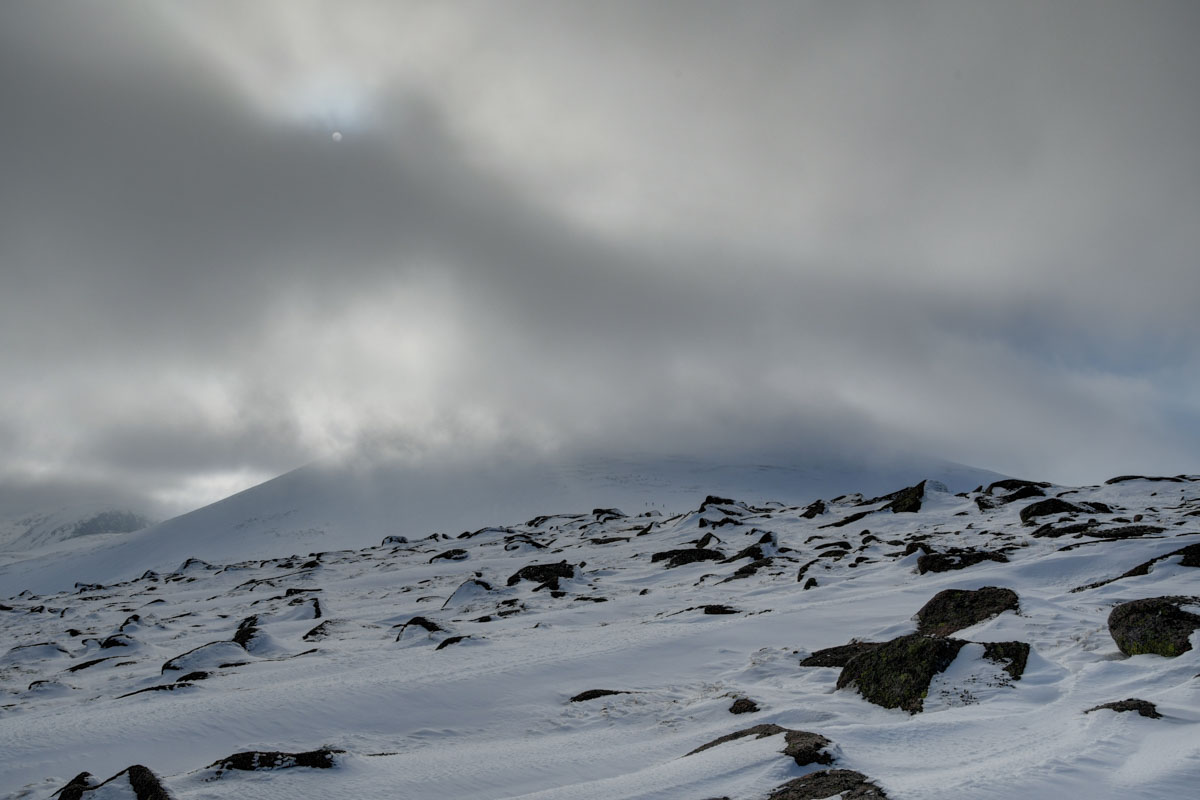 To return we headed direct between Coire Laogh Mor and Coire na Ciste, a fairly rapid return to the car. Spotted a ptarmigan pair on the way – the male strutted around while the hen stayed unobtrusive. 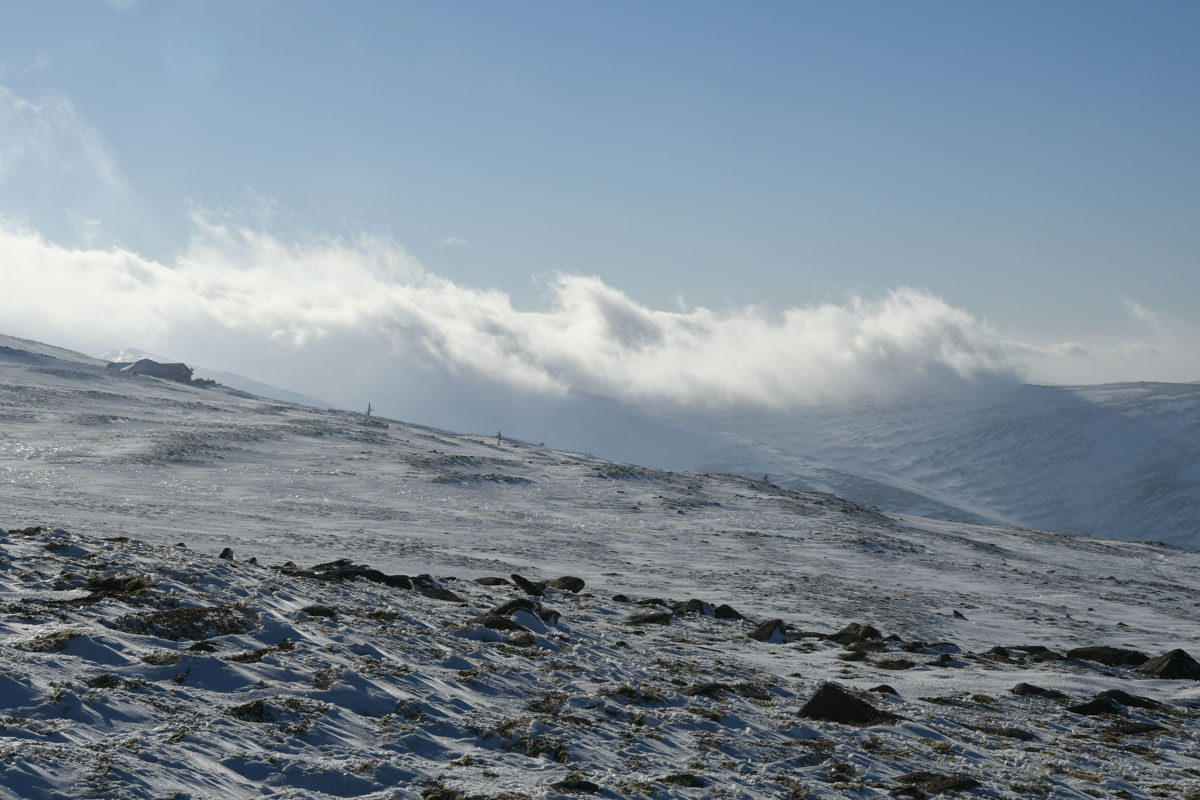 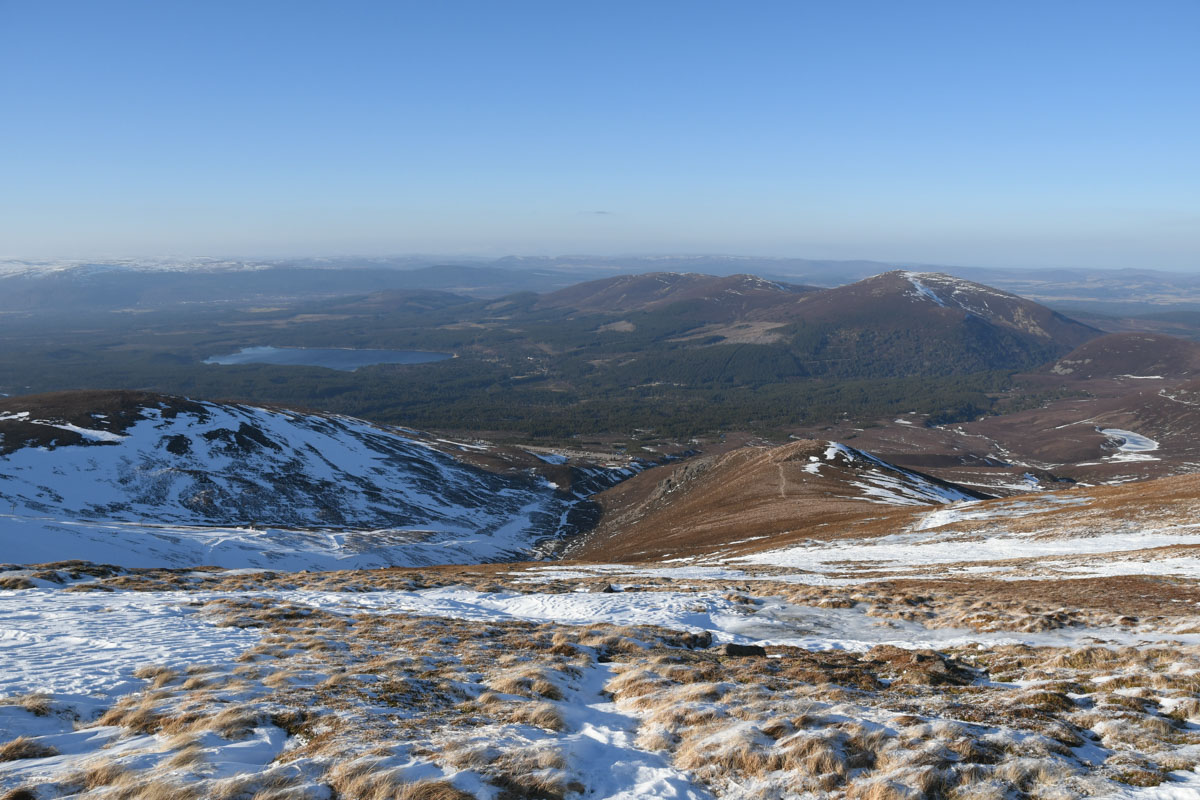 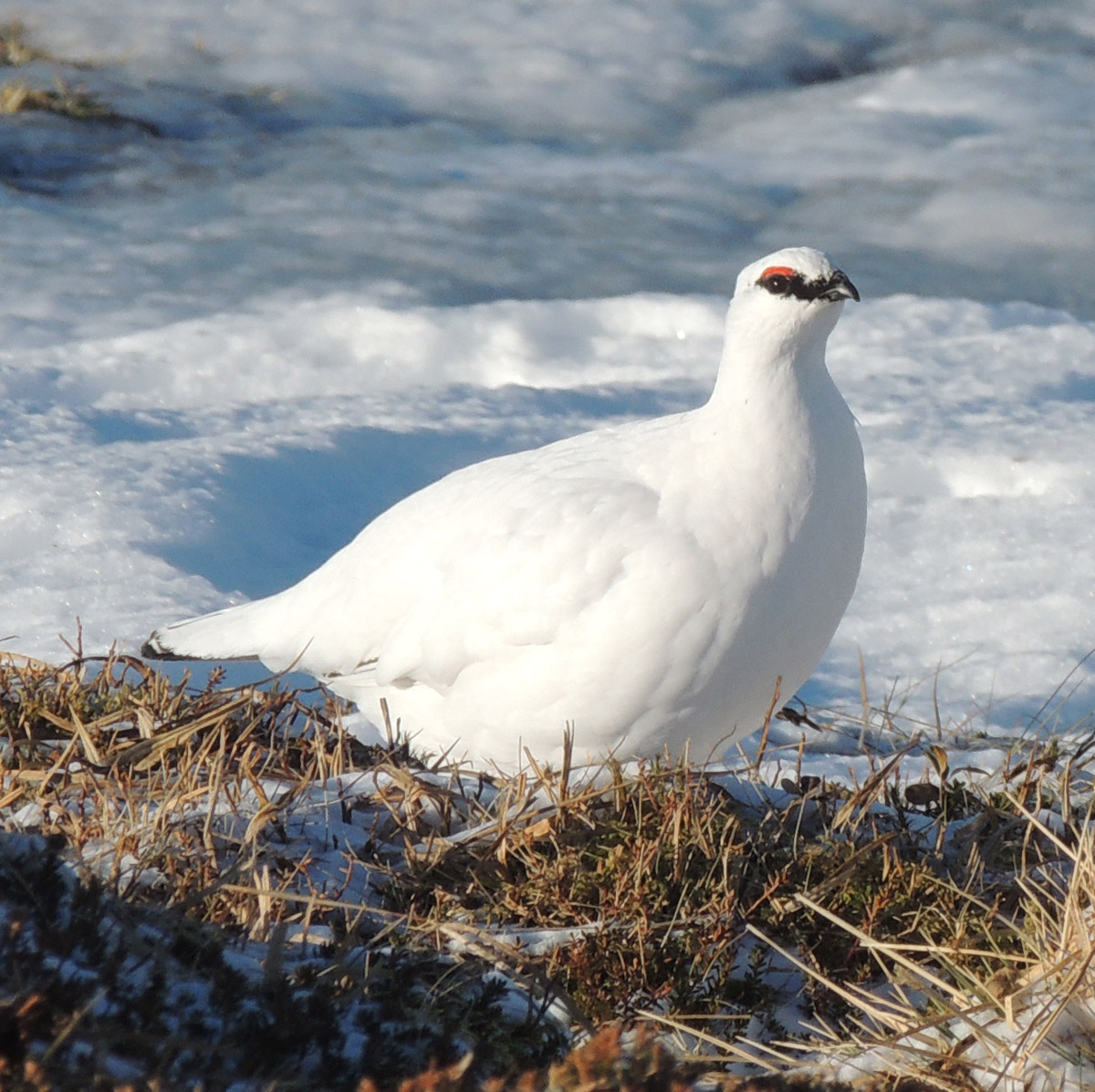 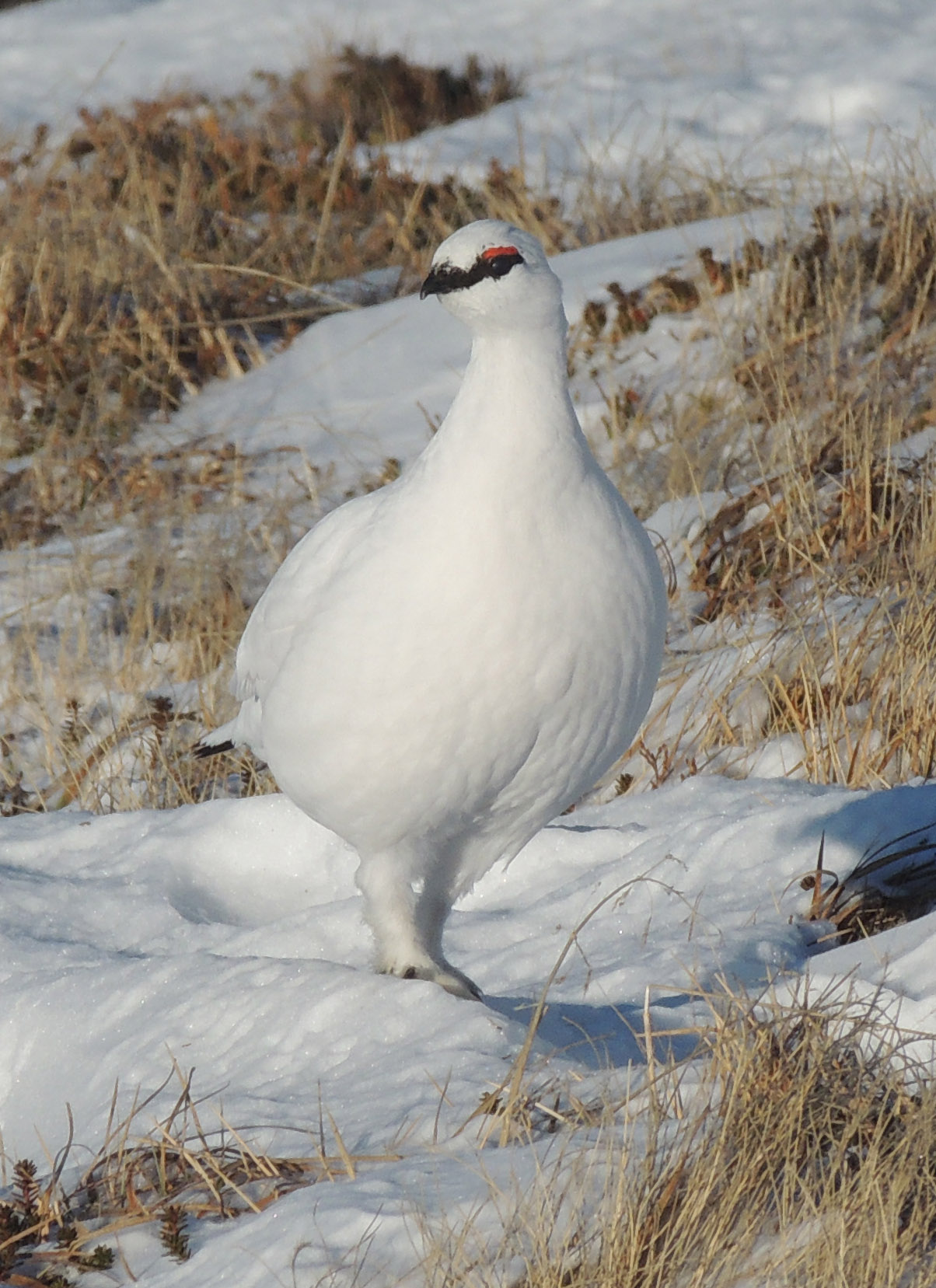 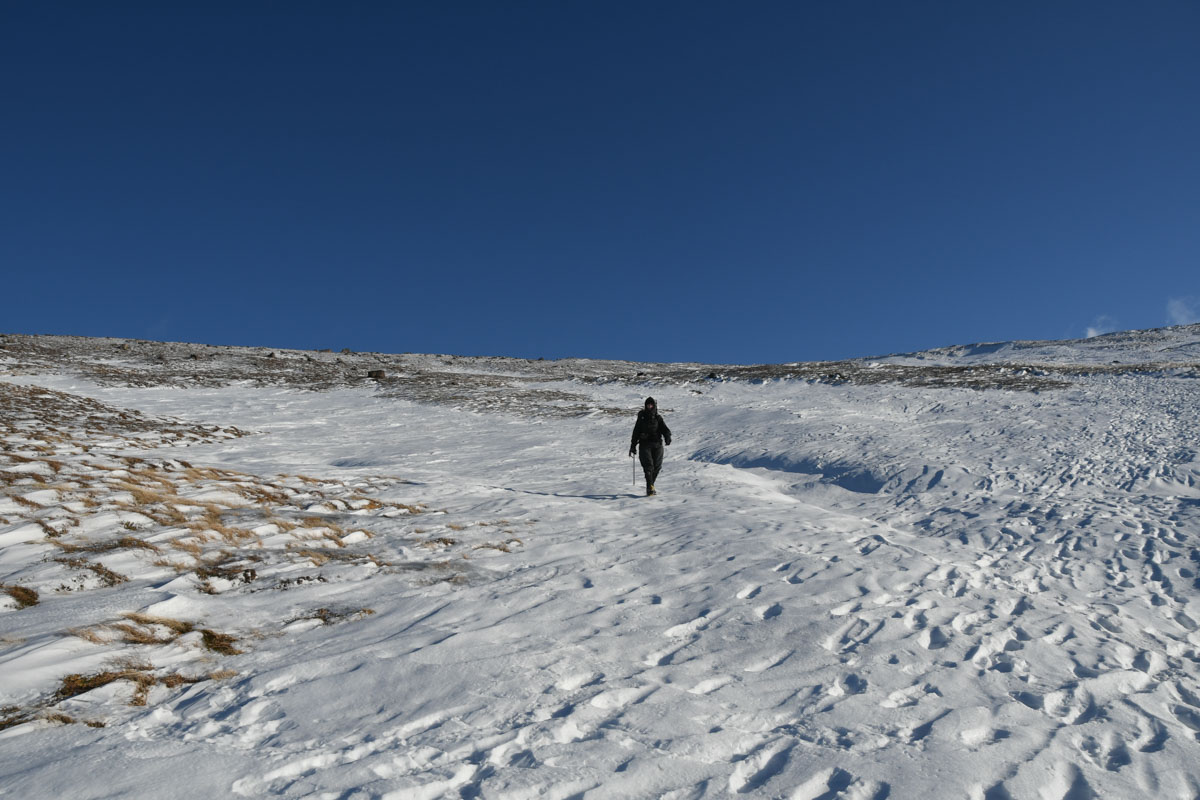 Down to the car and then back to our accommodation at Abernethy. Lots of wildlife there. 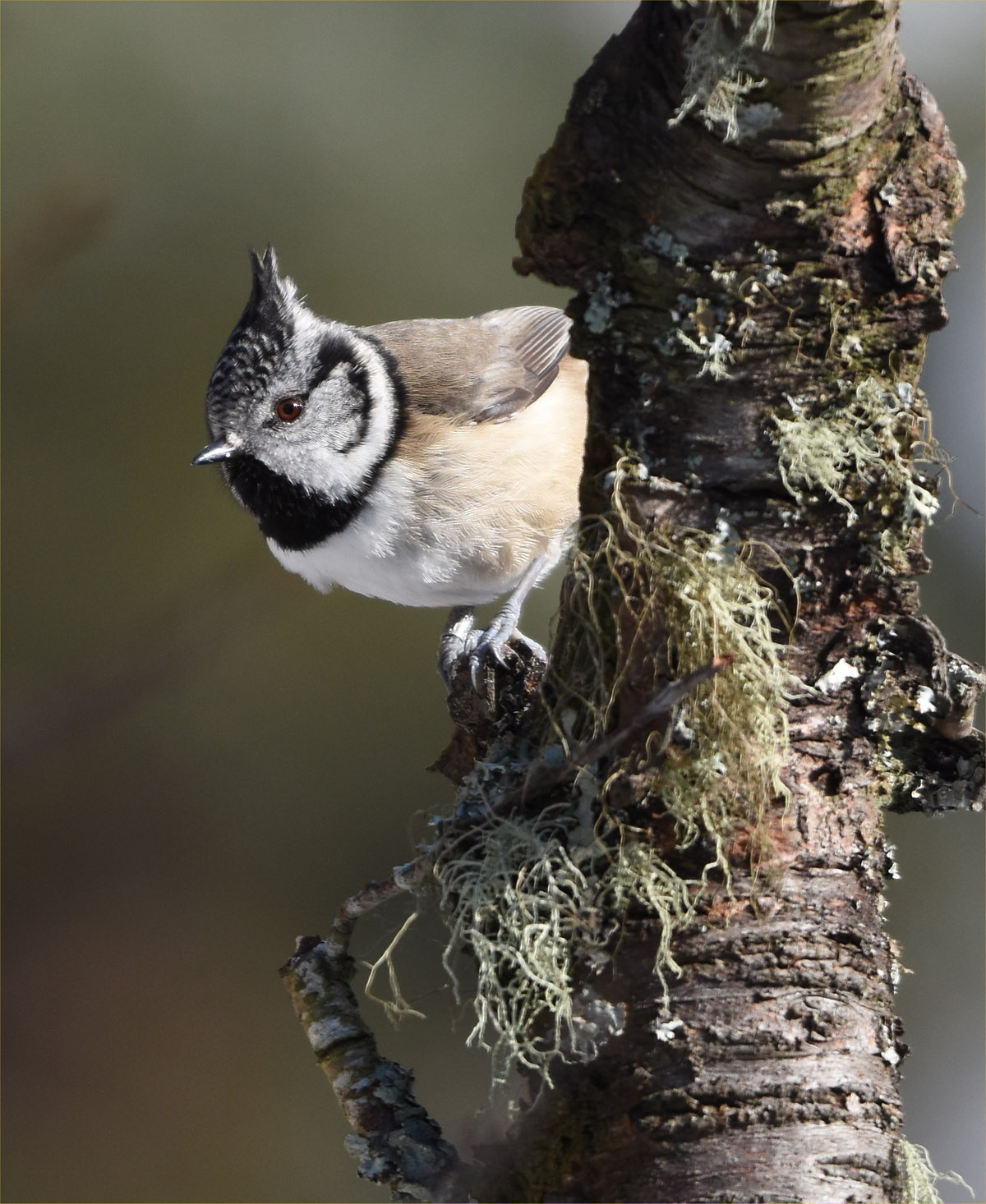