The weekend forecast looked reasonable in the East, if a little breezy on the summits. We hadn’t managed a wild camp since last August, which is a shocking gap. Friday night over a pub meal we had a few potential routes and camps considered.

Decisions made en route we parked a little later than planned at the Invercauld Estate car park. We’ve headed in to Lochnagar a few times through Ballochbuie Forest, several years ago we’d clocked a nice pitch in the pine woods near the tree line. A plan was hatched to carry the camping gear up there then walk a foreshortened loop towards Lochnagar.

Didn’t set off til nearly 10am.

A nice looking day, the hills looked inviting from the renovated Old Bridge at Invercauld. 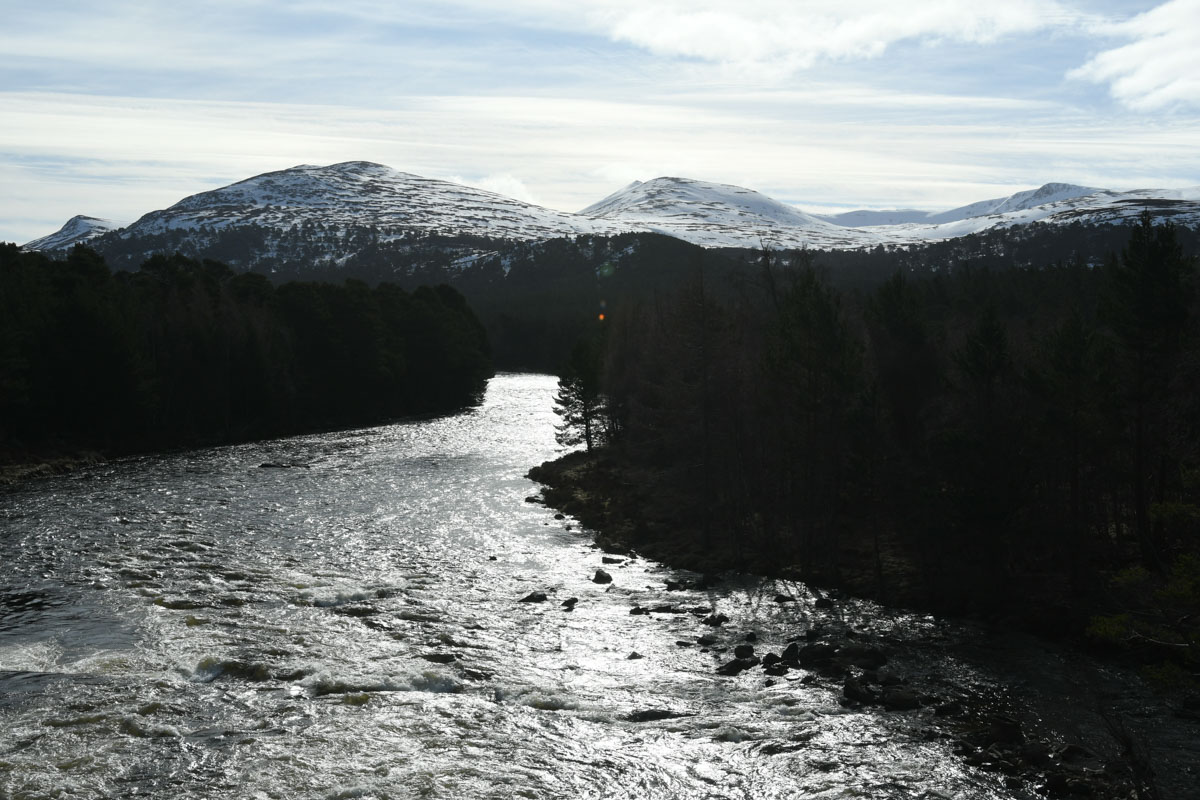 There’s a cracking set of falls at NO 199 895. We always seem to pass these in the morning, looking into the sun. One of these days we need to visit in the evening for some photos. 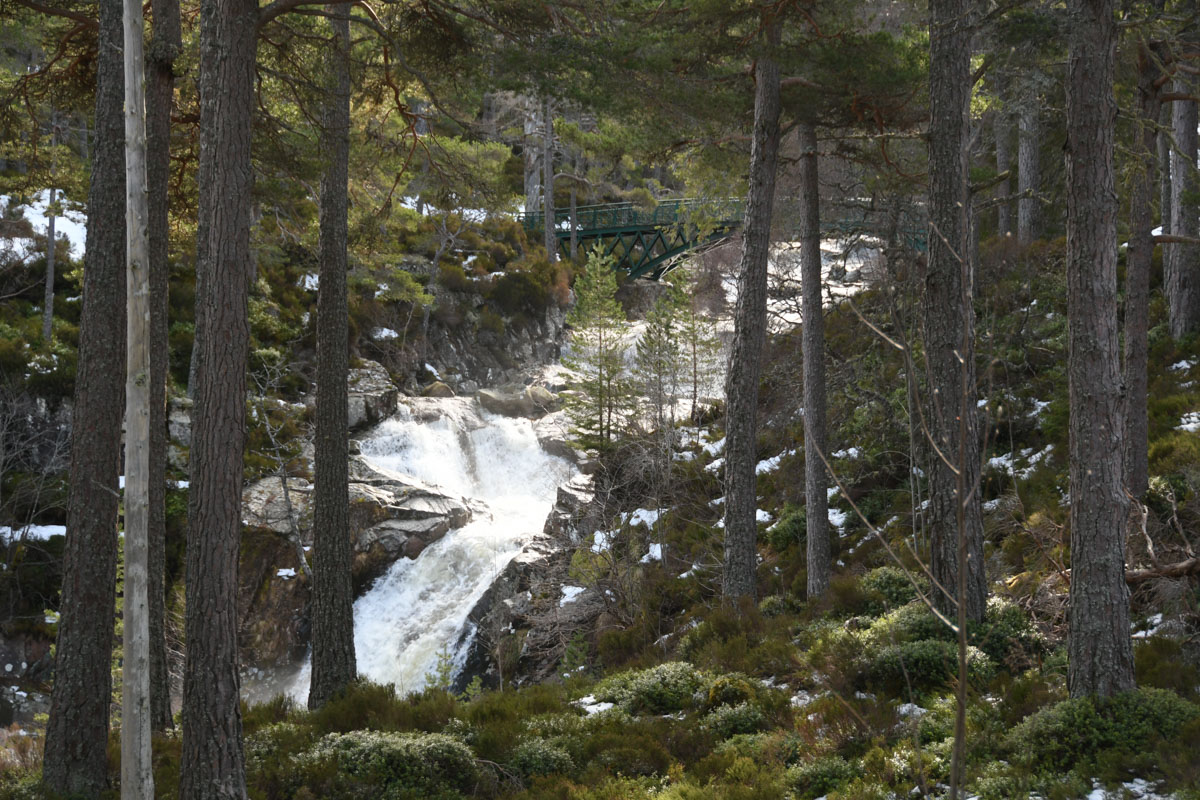 Ballochbuie Forest is a lovely Caledonian Pine wood, there are a few paths through the woods and they can be worth a wander at any time. 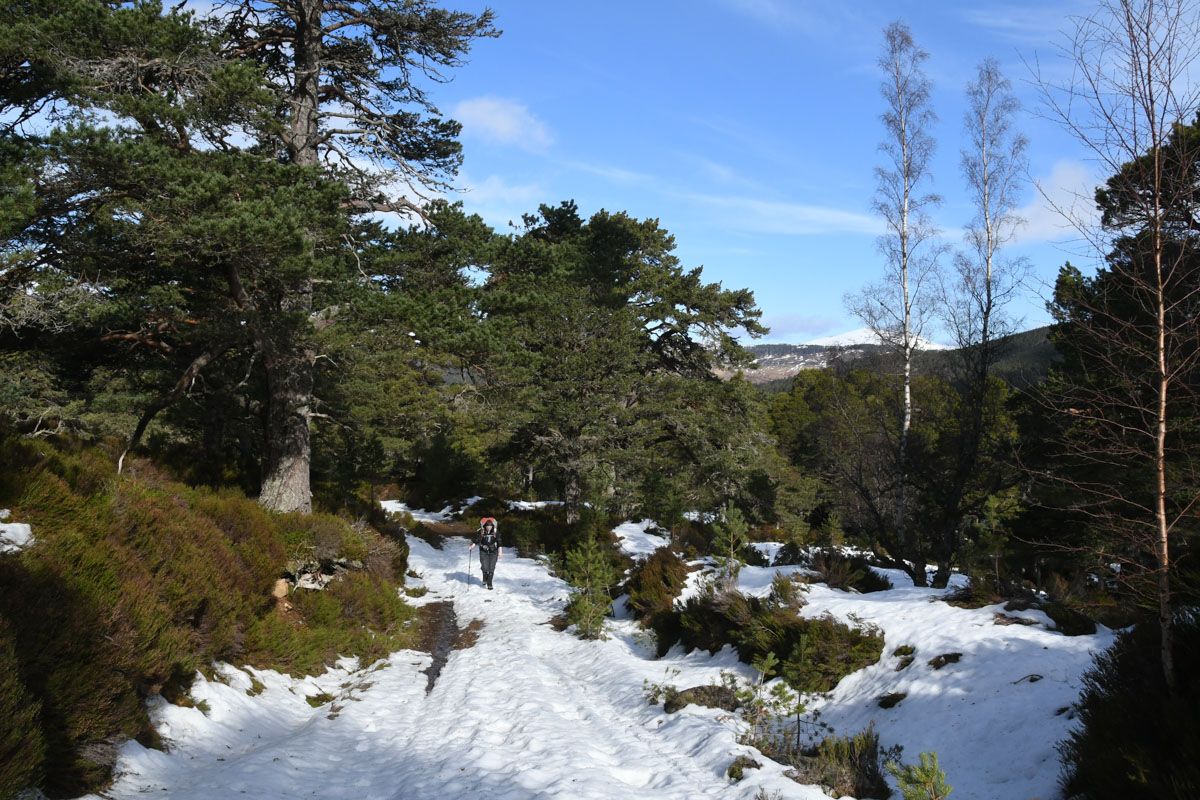 Although we thought we remembered where we’d identified the pitch we had it wrong – this led to about 40 minutes of plowtering through high heather with heavy packs, not entirely enjoyable.

Eventually we found our pitch site about 500m from where we had remembered it. A nice stand of pines with low vegetation and a view NW and north.

Dropped the tent and camping gear, repacked and set off. We decided to head up Cnapan Nathraichean. We’ve been up this hill twice and the first ascent from the tree line can beirksome with high heather. On this occasion there were nice, firm snow patches so the ascent was much more fun. The views open up first to Beinn a Bhuird and Ben Avon then to Macdui and Cairn Toul.

Spotted one adult Golden Eagle sailing by on the hunt for hares.

Beinn a Bhuird over Invercauld: 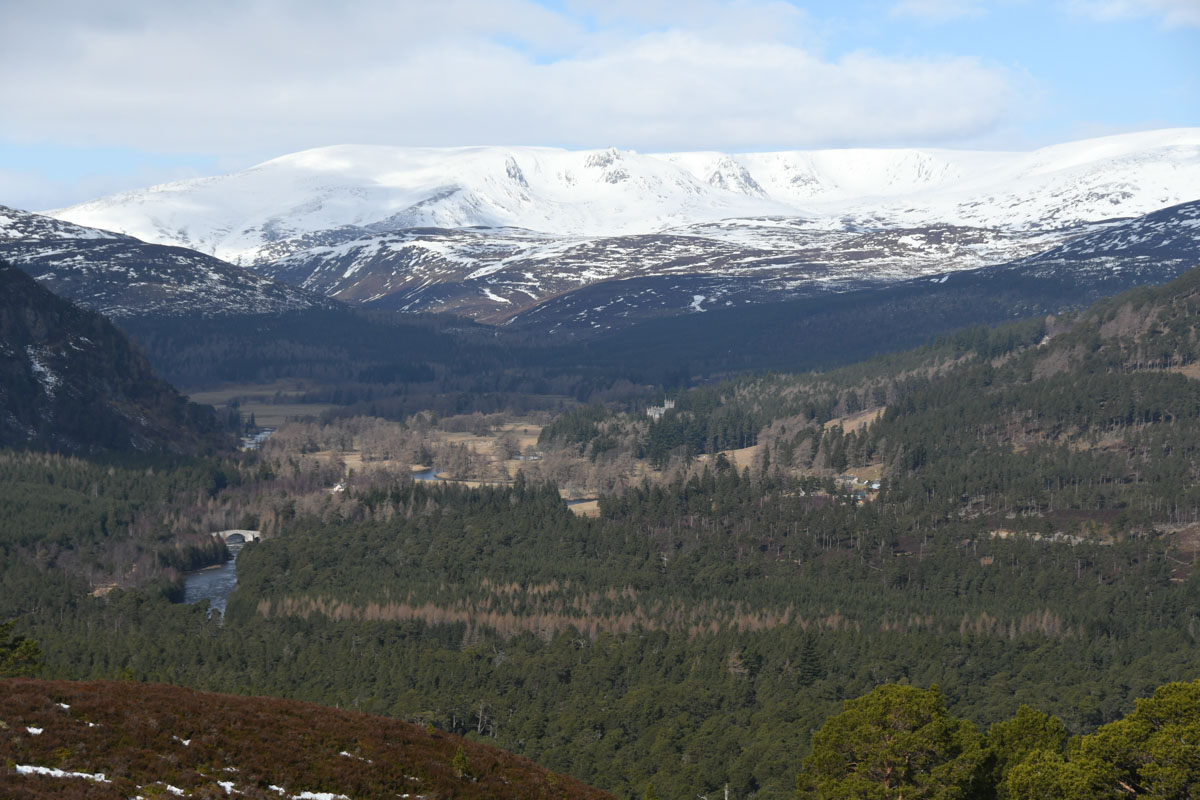 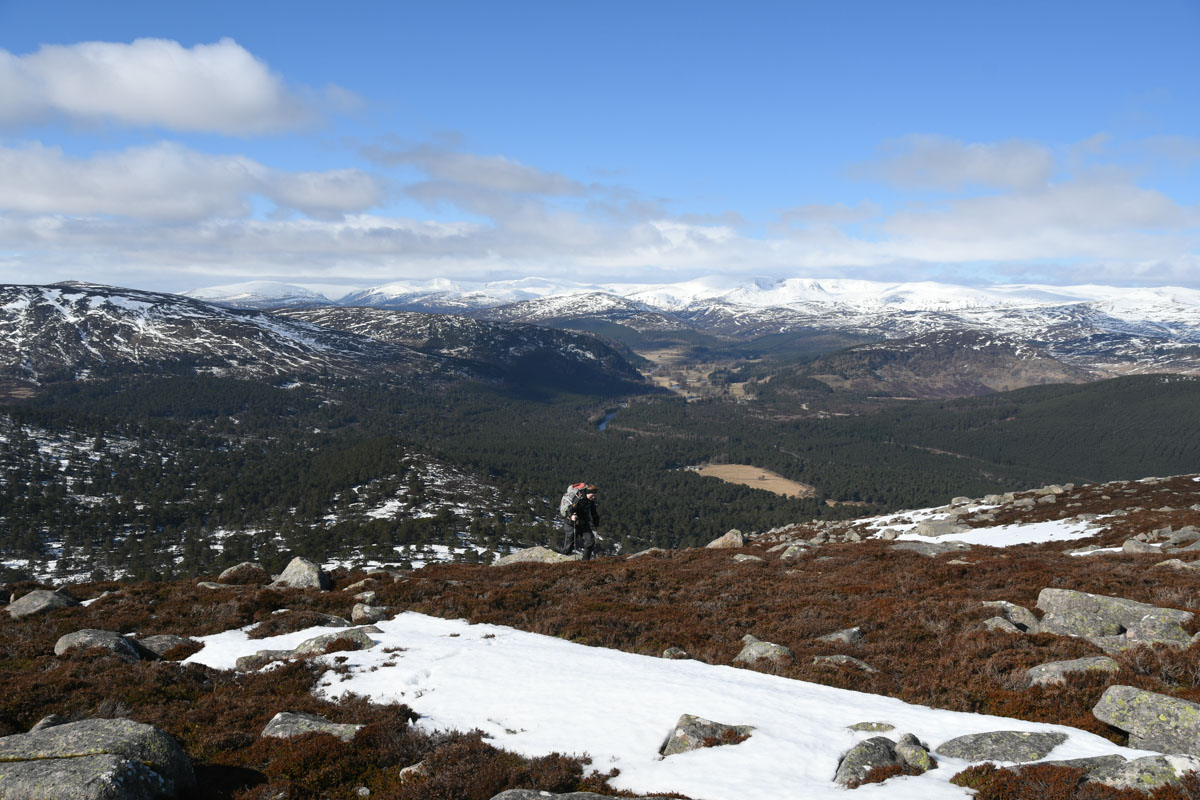 Started to see the first of many Mountain hares, still in their winter gear. 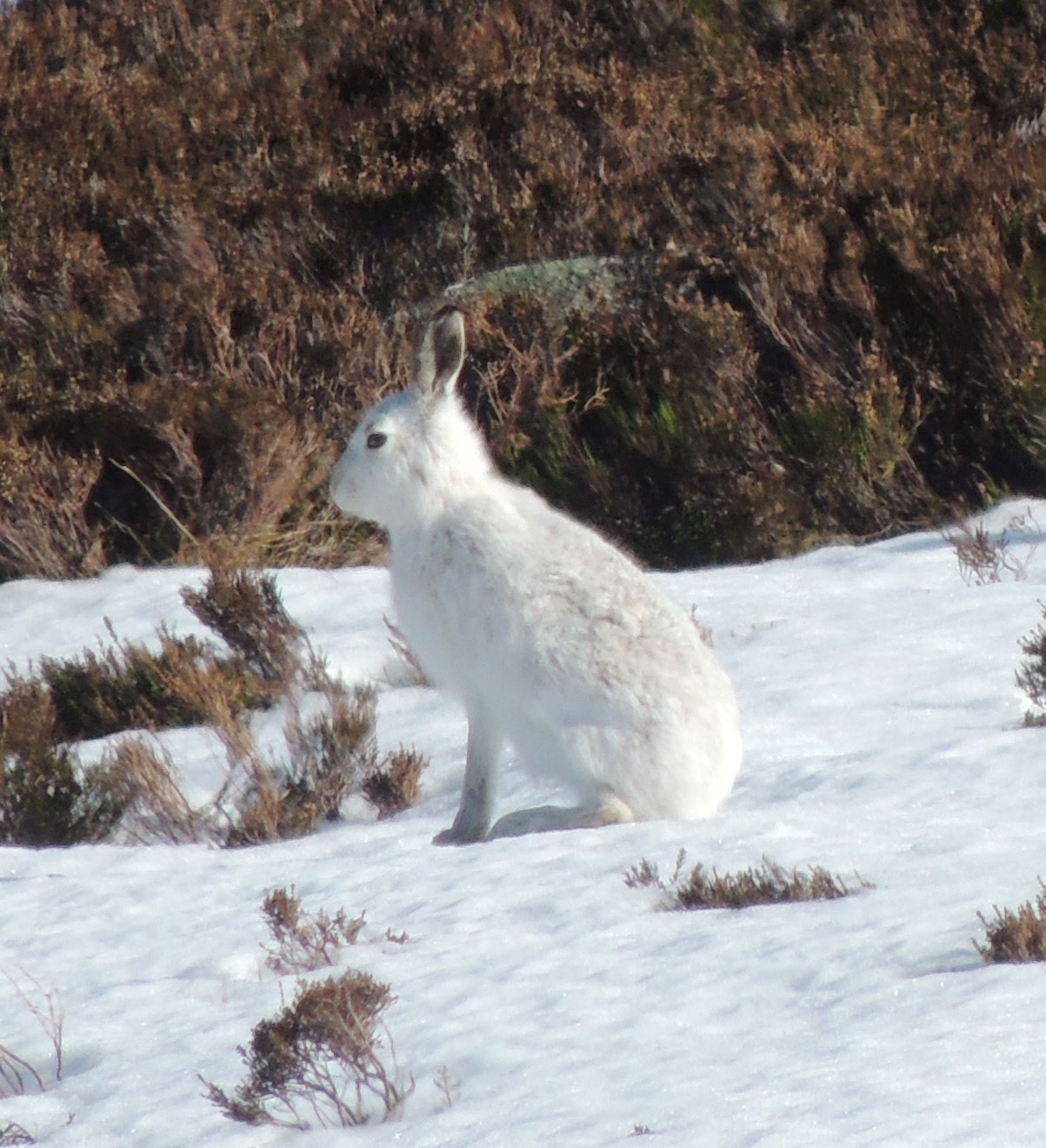 Once up to the summit of Cnapan Nathraichean we sat and had a bite to eat and took in the views. 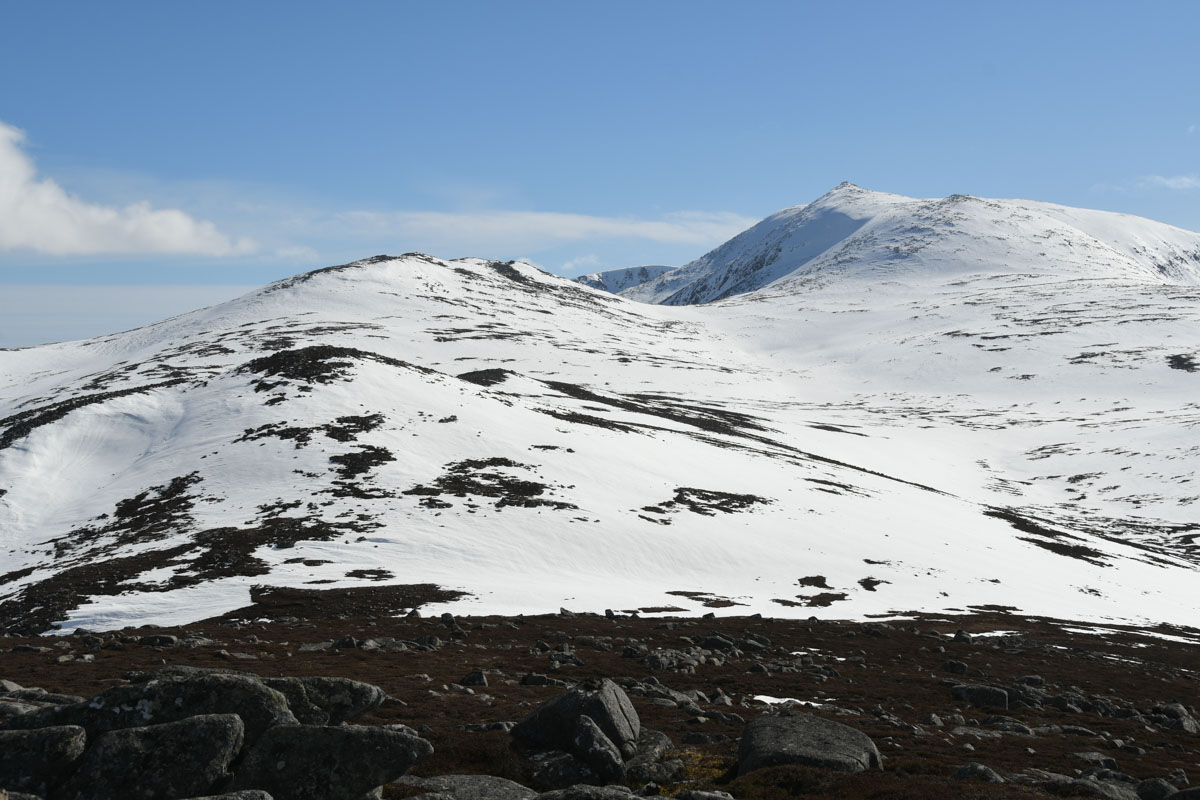 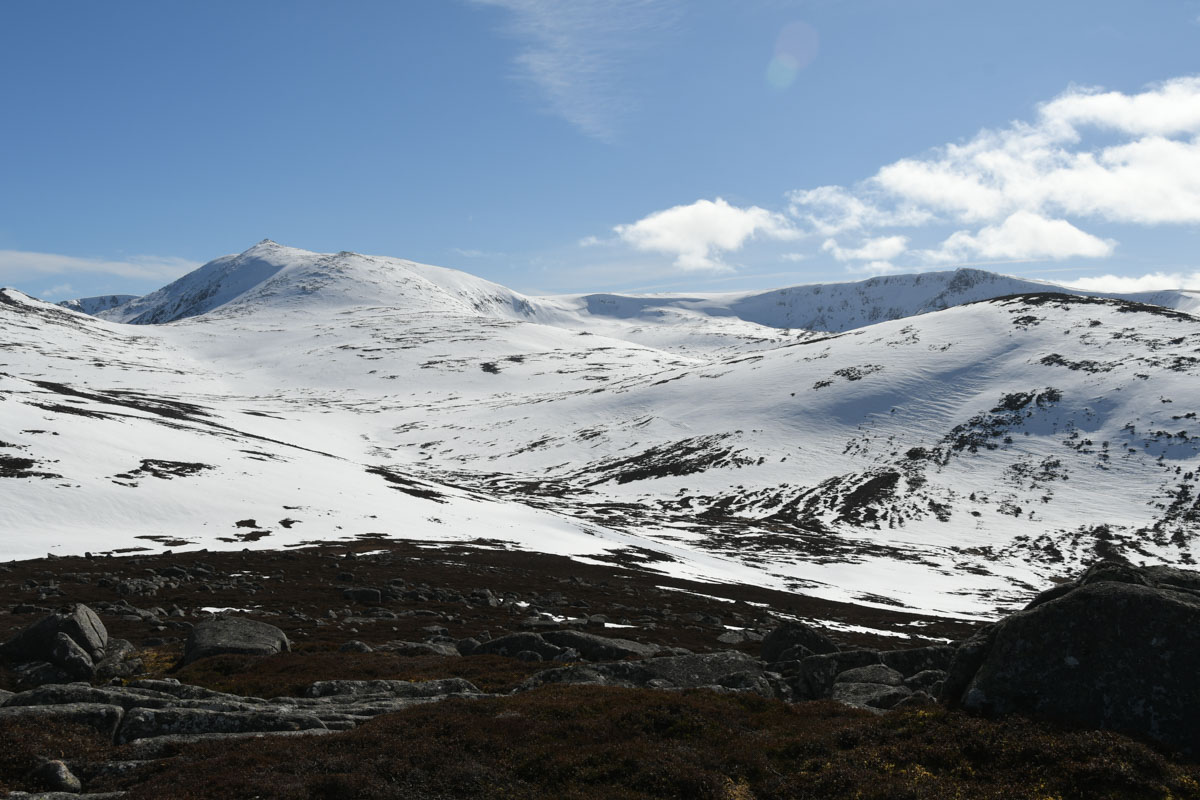 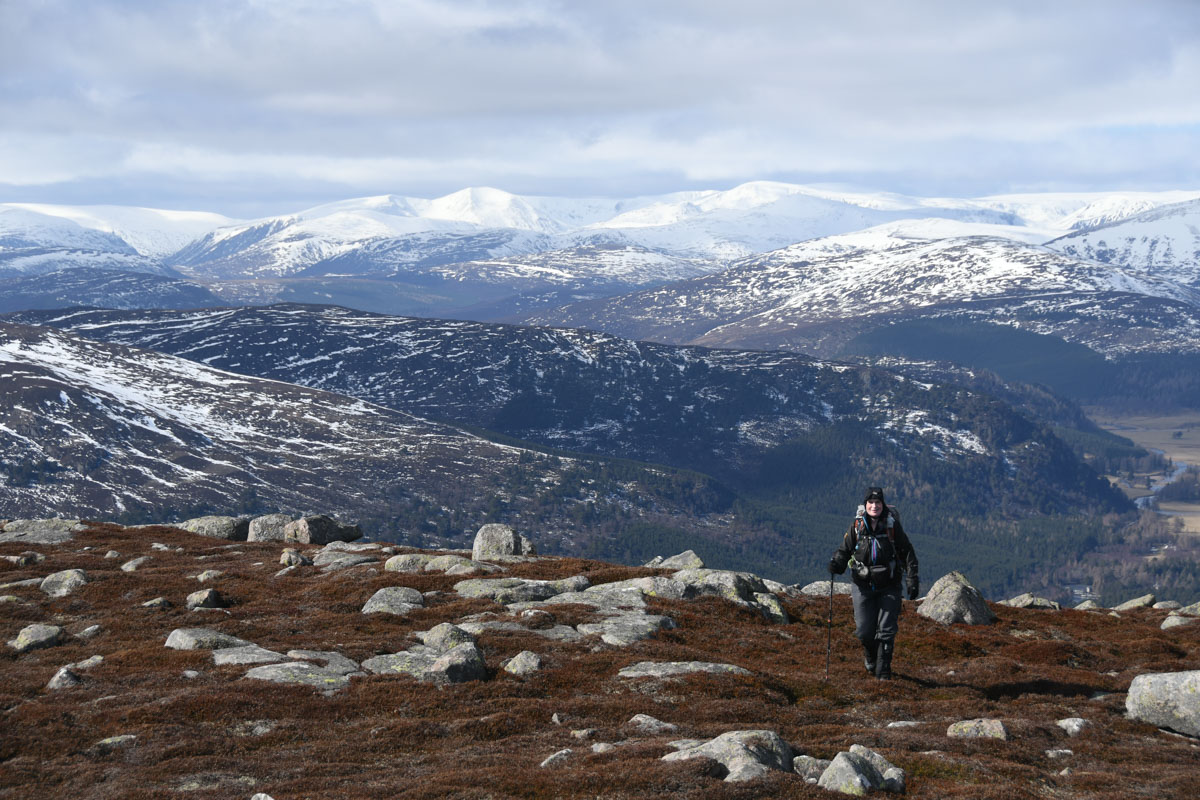 The hares were shifting around us trying to stay on the lee side from the wind and, as much as possible, out of sight for us too. 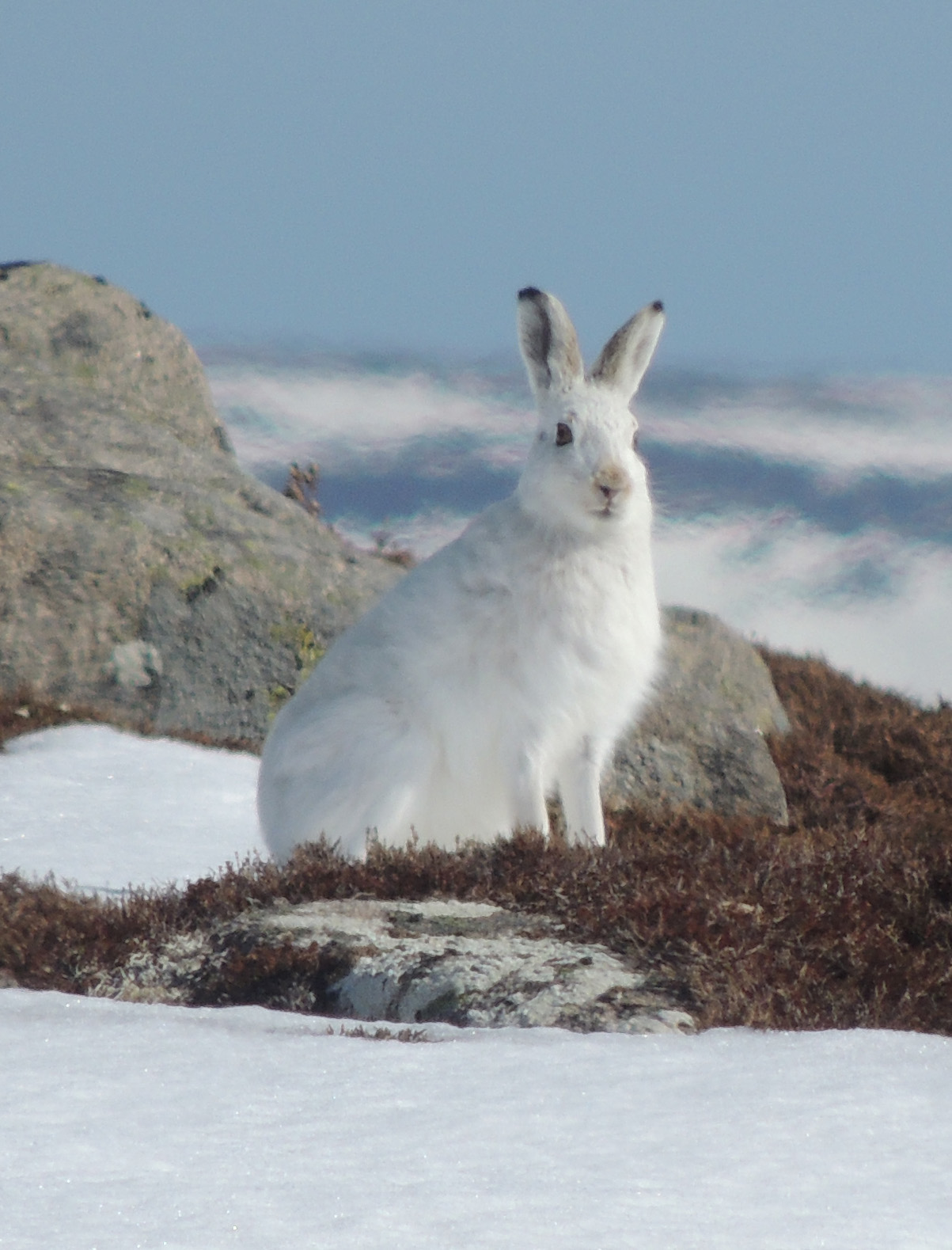 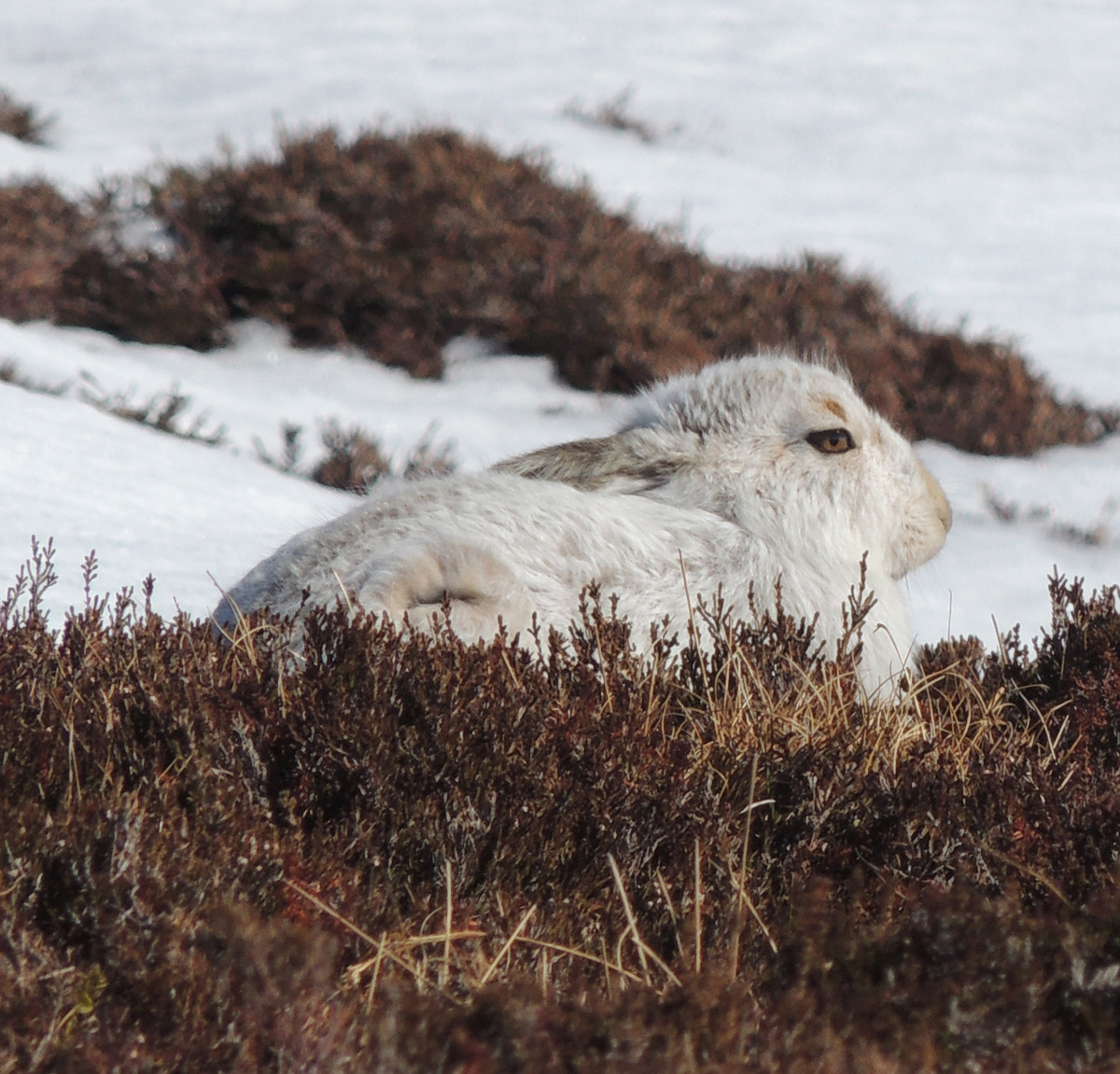 Carried on across the unnamed 830m summit towards Meall Coire na Saobhaidhe. The Cairngorms were getting a bit more active weather than we were, Cairn Toul cleared briefly. 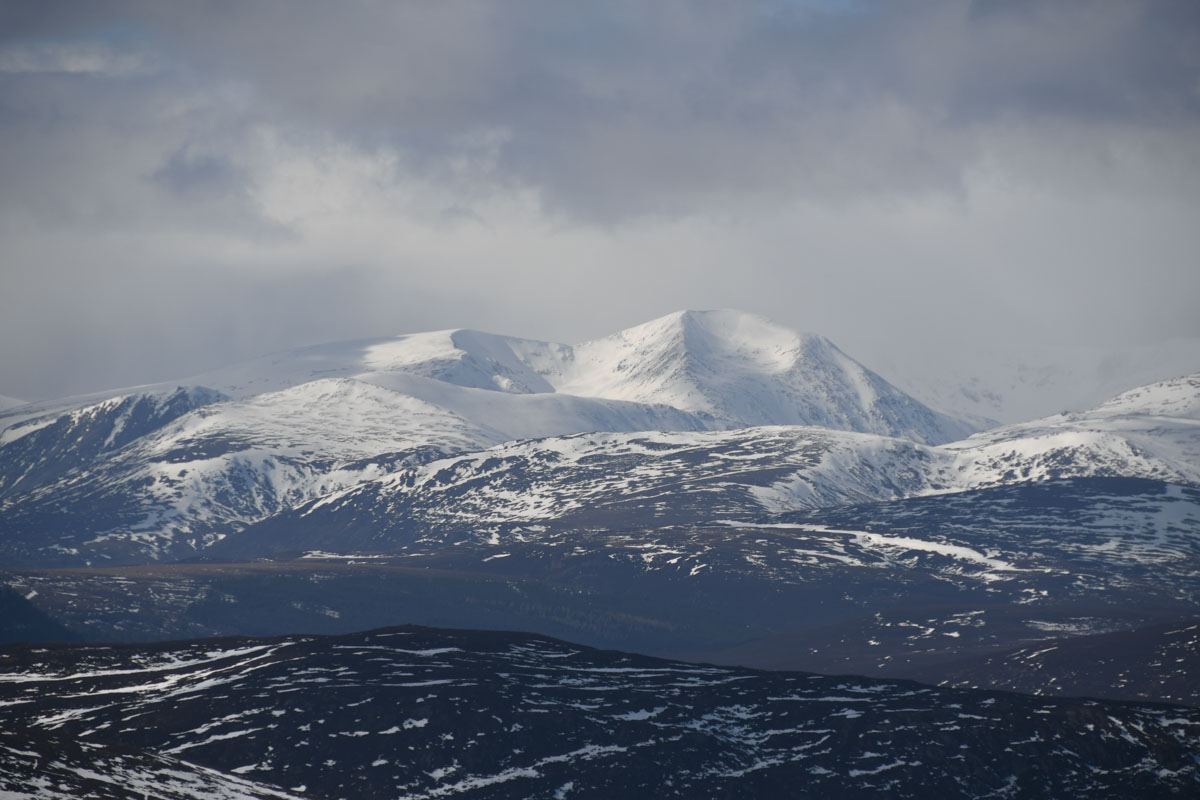 Meall Coire na Saobhaidhe had a more confluent snow cover, the sun had softened it quite a bit, we simply had microspikes on which sufficed easily (ice axes and crampons were training weights for the duration). 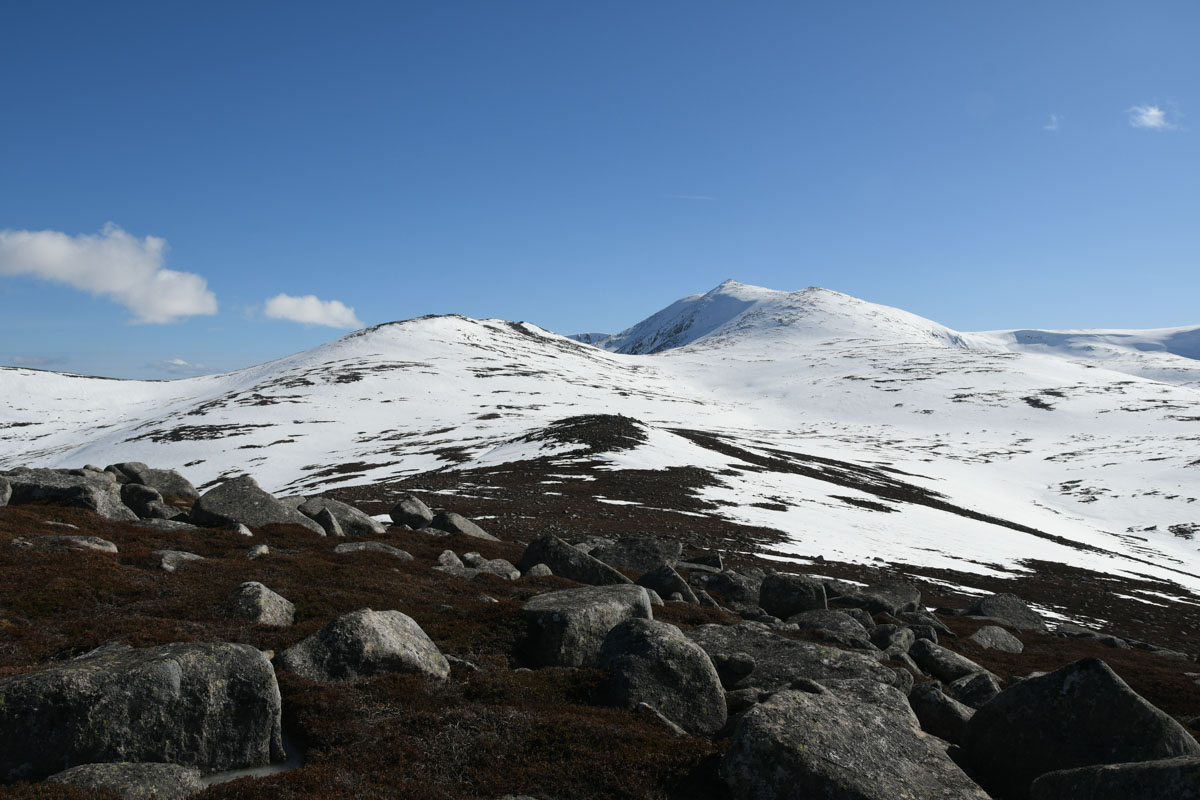 As we ascended Meall Coire na Saobhaidhe the views of Lochnagar and The Stuic opened up. Our last visit to this side of the hill was in clag so we were glad of the opportunity to see it in its winter finery. 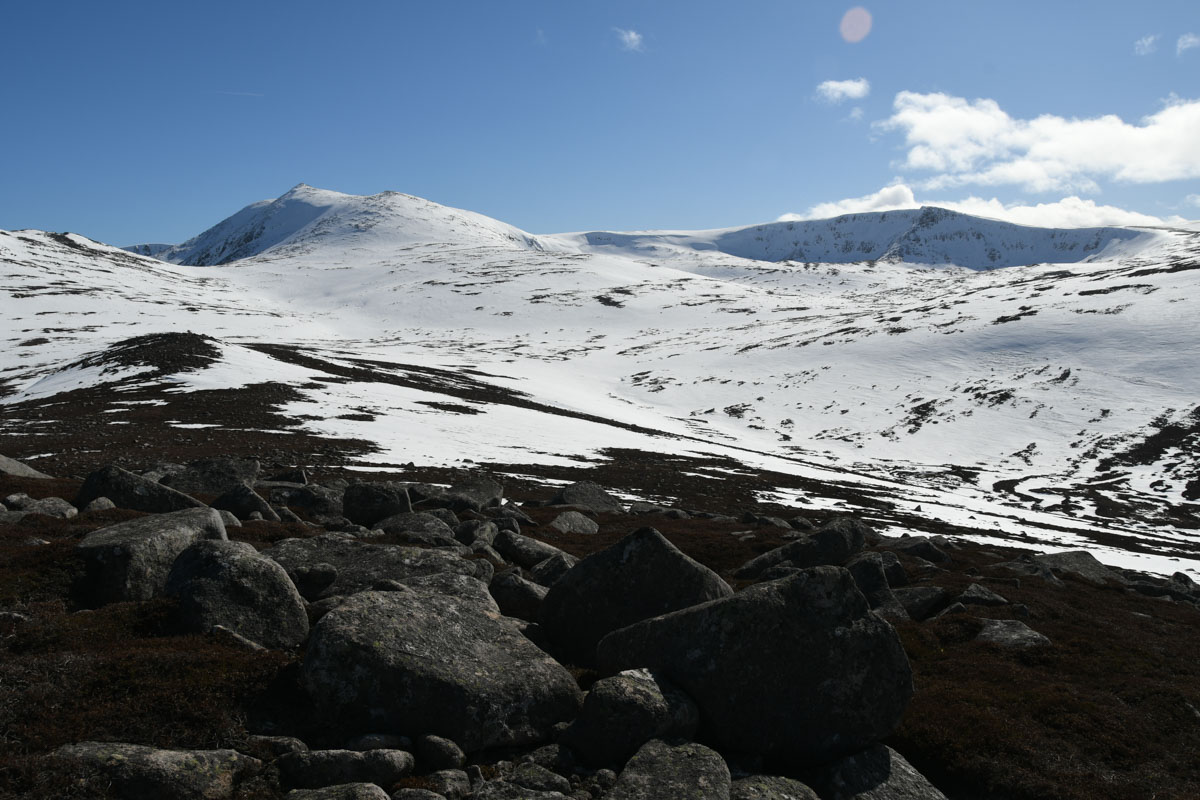 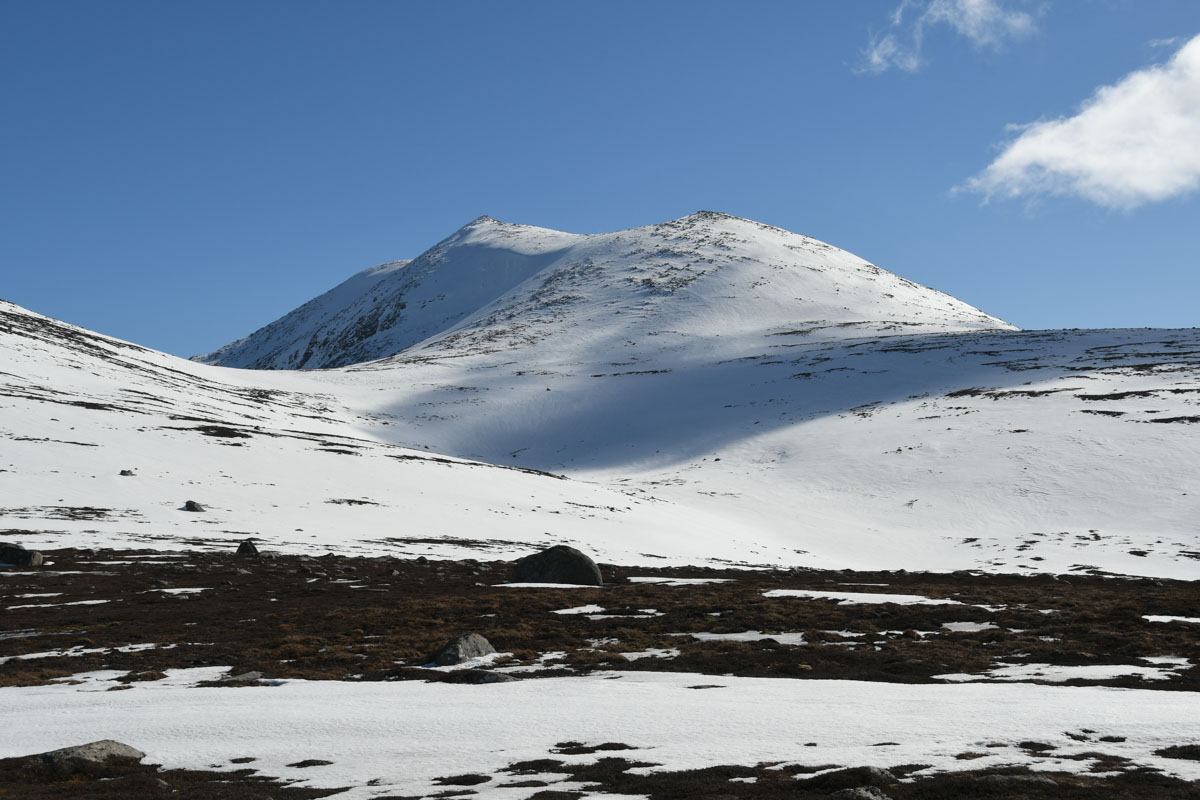 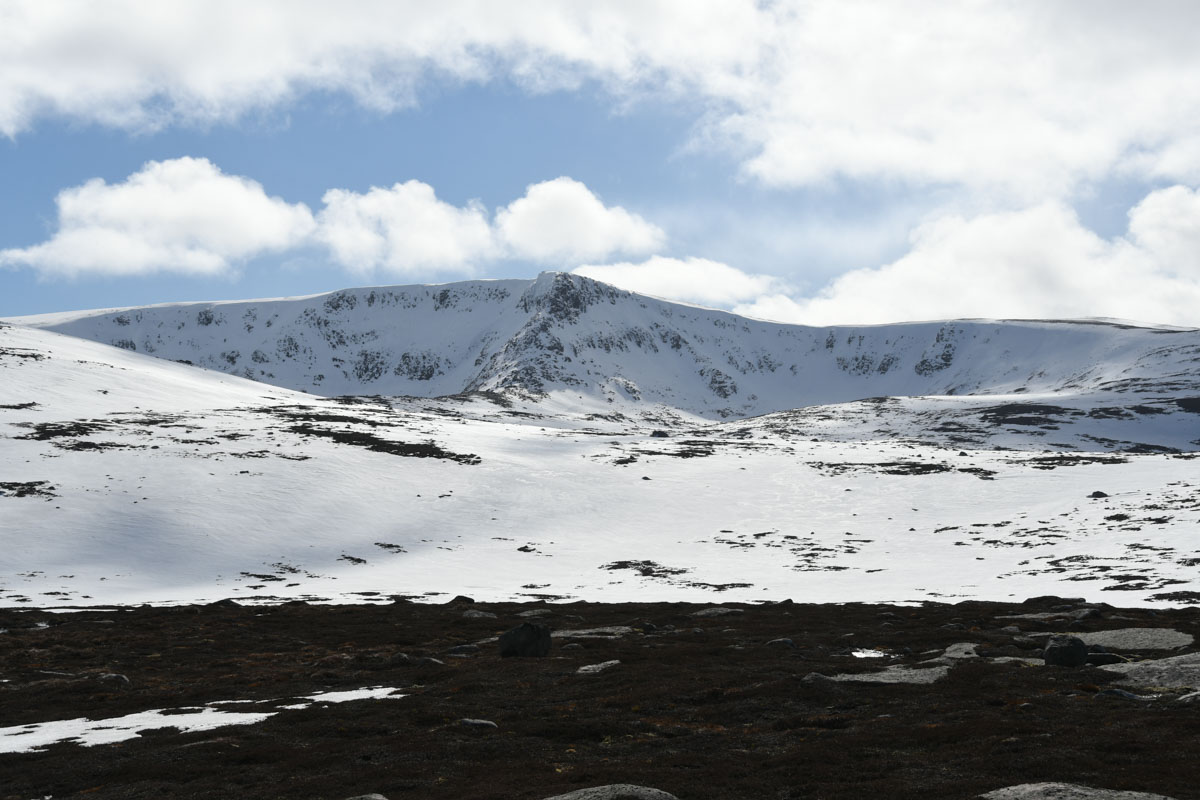 Once up on Meall Coire na Saobhaidhe there is a cracking view of Lochnagar. Well worth visiting this outlier. 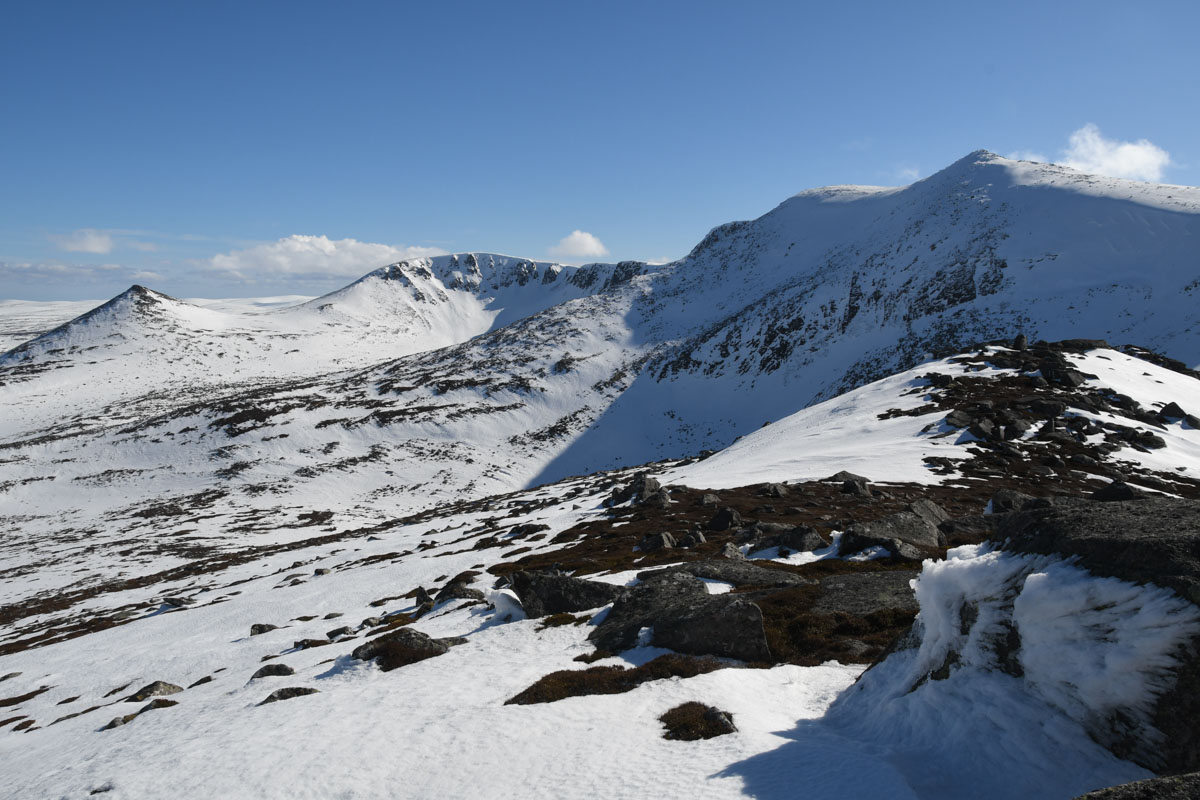 We considered ascending to the summit of Lochnagar – another 250m – but decided we’d like to get back to the tent in good time. We also wanted to wander to the area under The Stuic for a look, not somewhere we’d been before.

Traversed across the NW flank of Cac Carn Beag to get a look into the amphitheatre of Coire Loch nan Eun – quite a decent view. 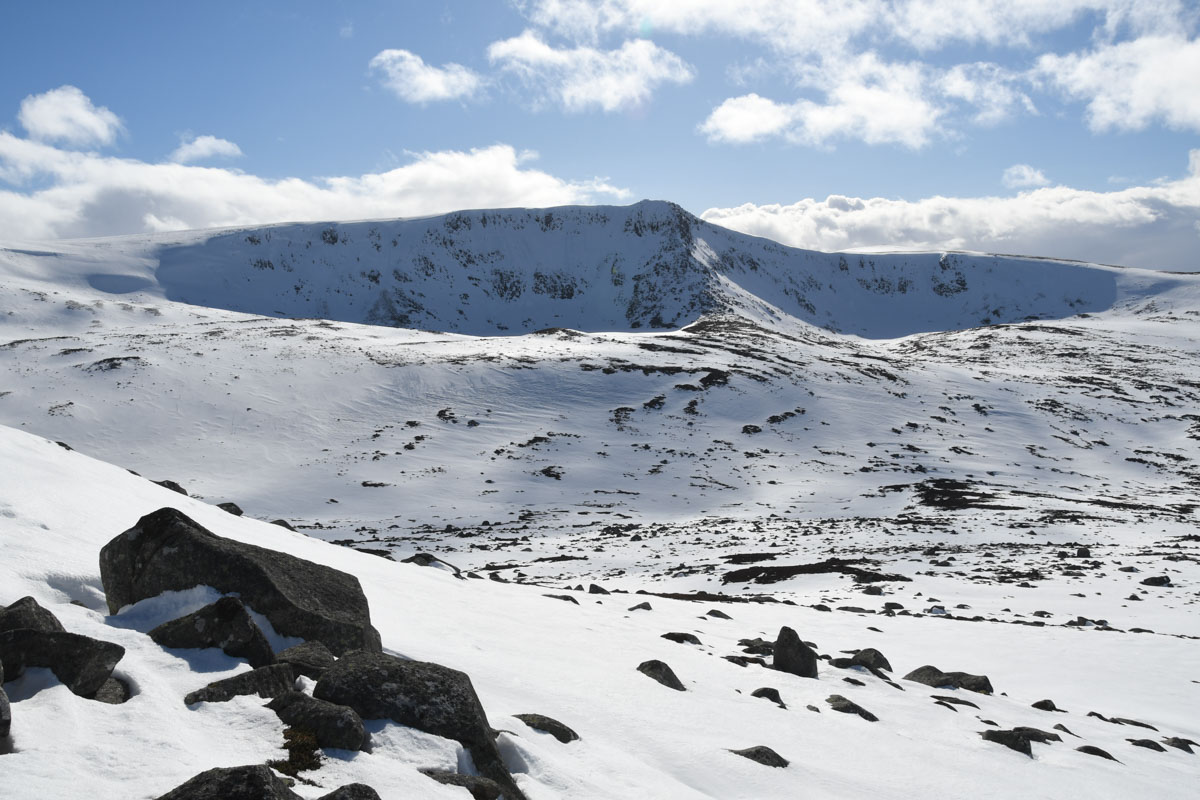 Then headed towards a frozen Sandy Loch with a view to joining the track to the west at NO 203 873. 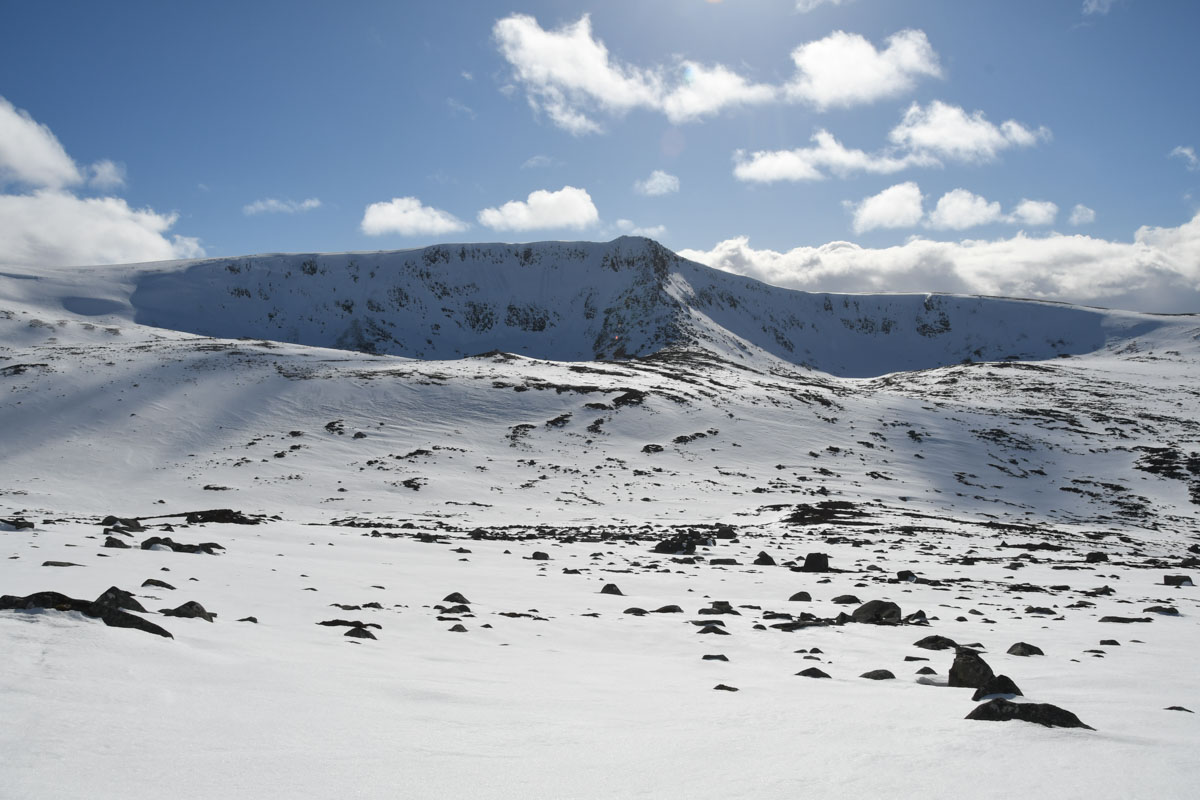 Dropped down on reasonably firm snow patches. Did have one plunge into a hidden stream, snow bridges are a worry. 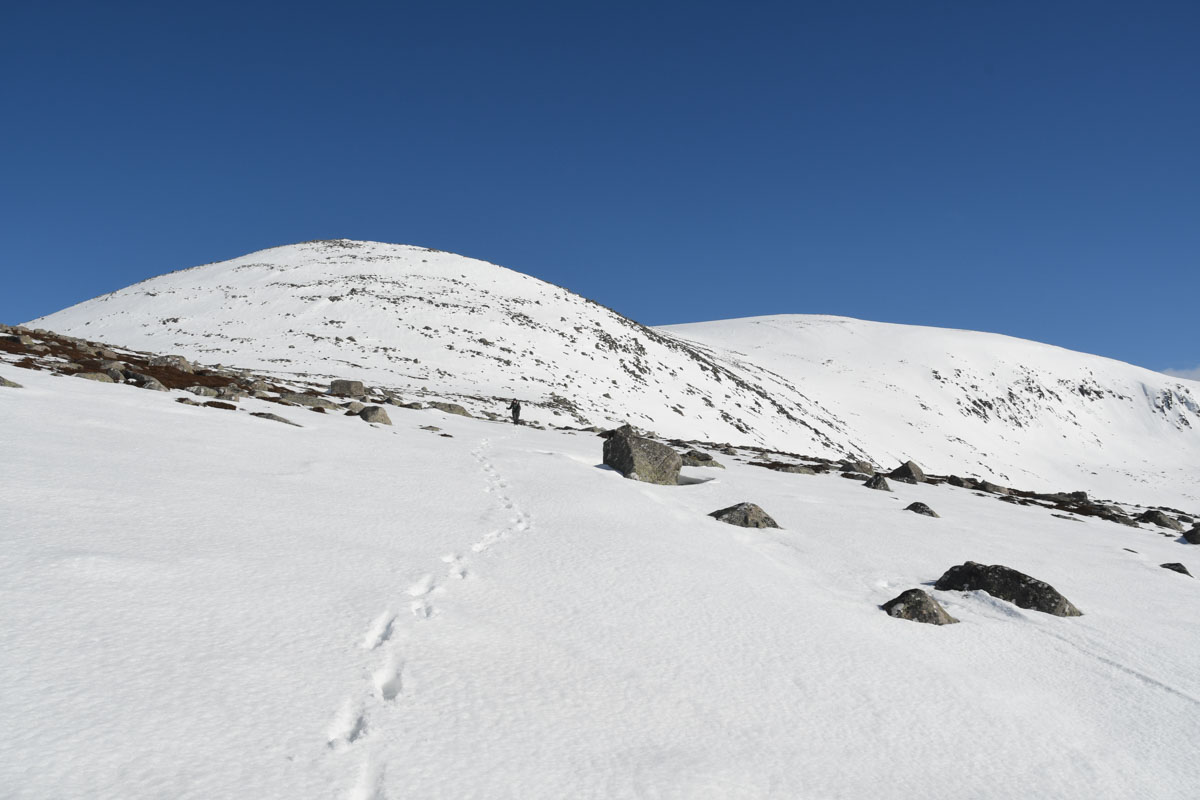 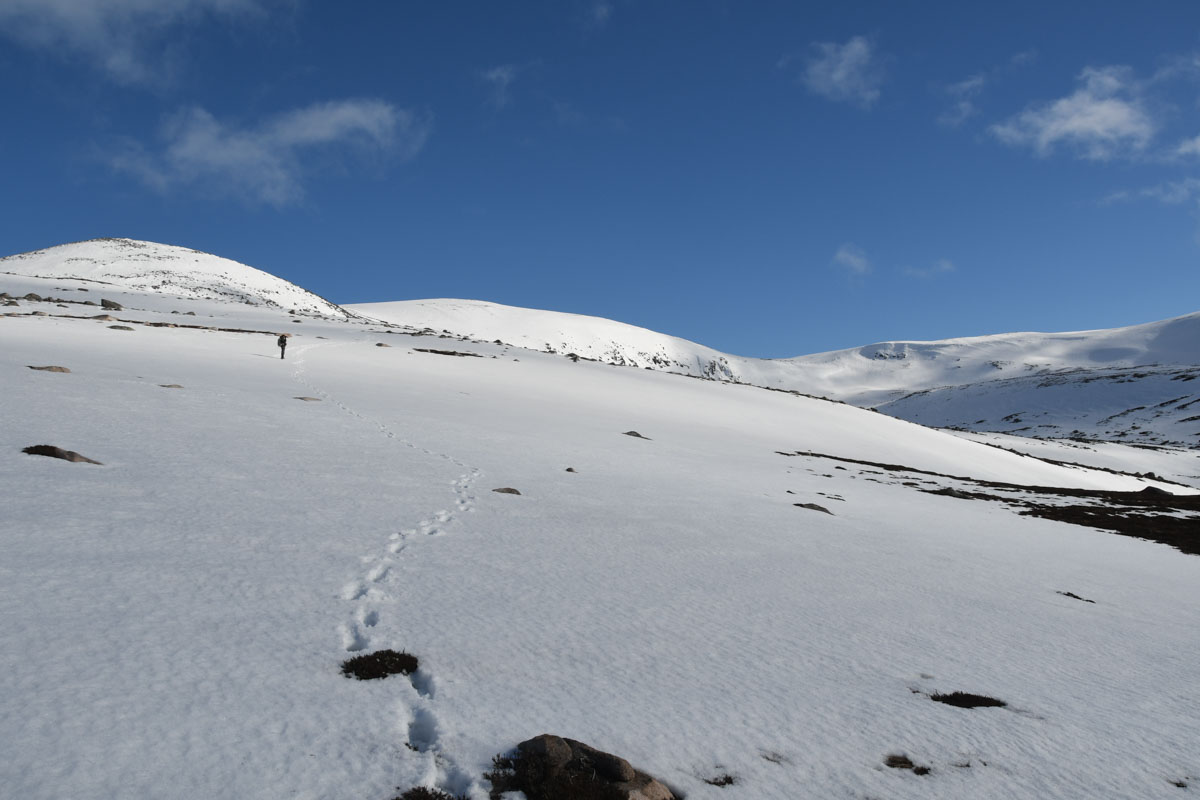 Sandy Loch was not obvious under snow and ice.

The Stuic and Sandy Loch: 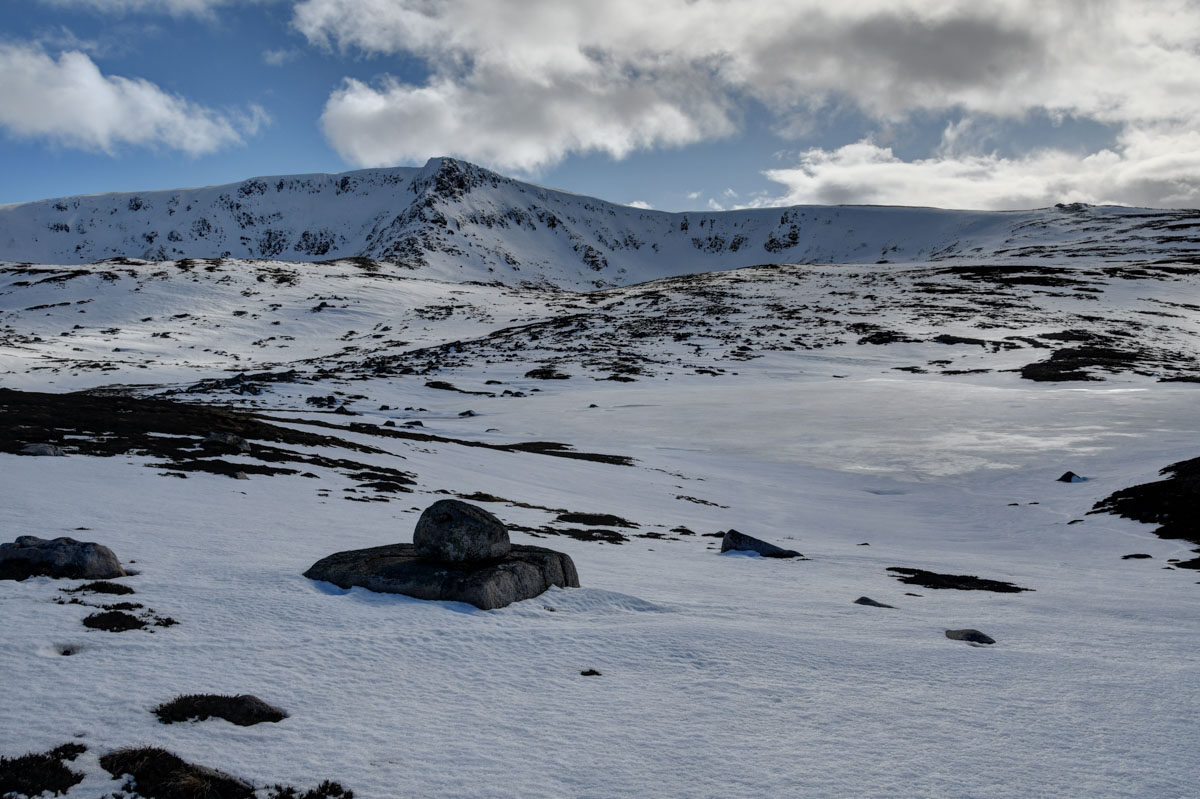 At times the hillside ahead was moving with white dots as the hares played Hare Chess. 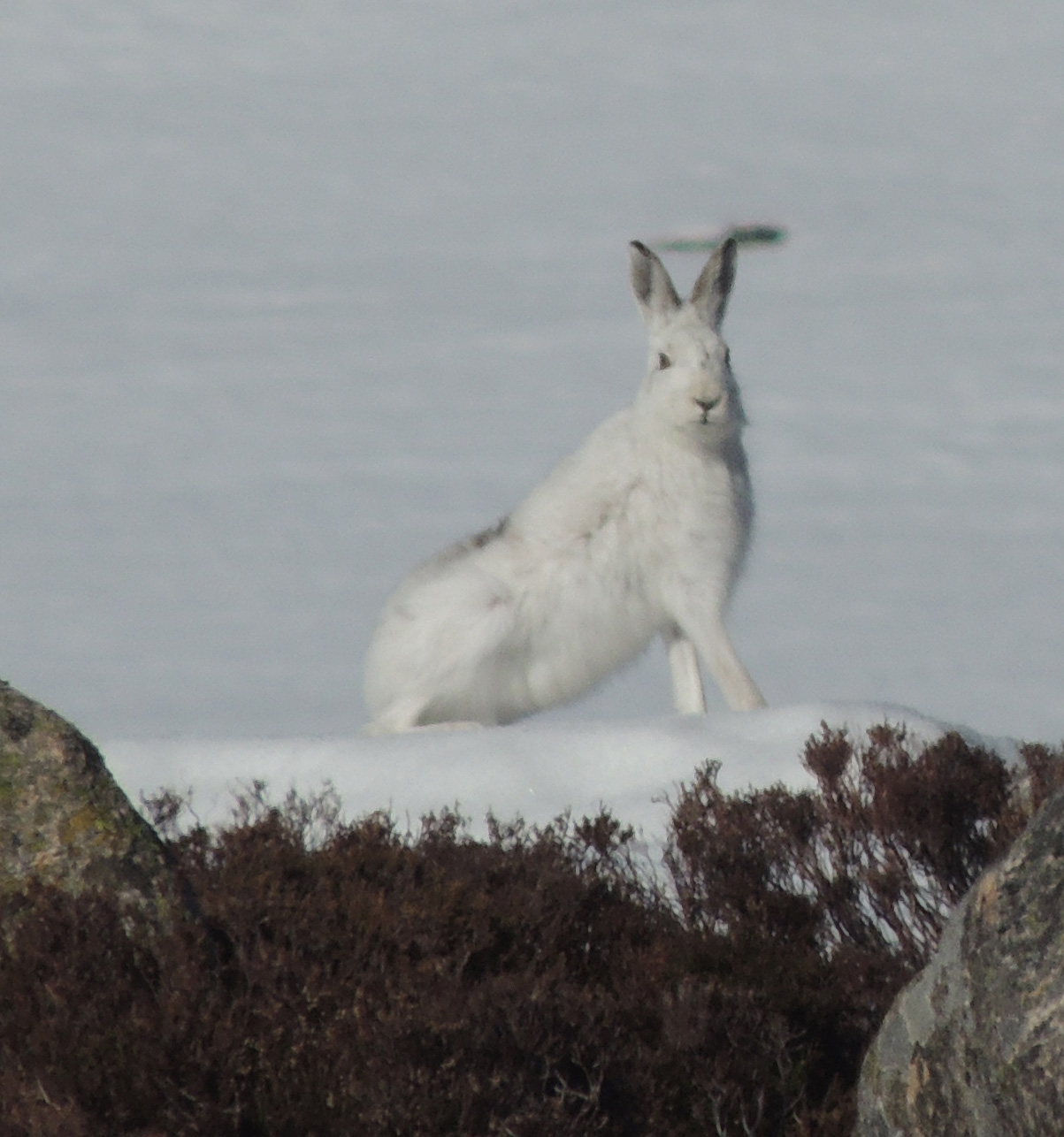 Ben Avon had cleared nicely – the tors were standing out and I wondered if anyone was enjoying climbing them. 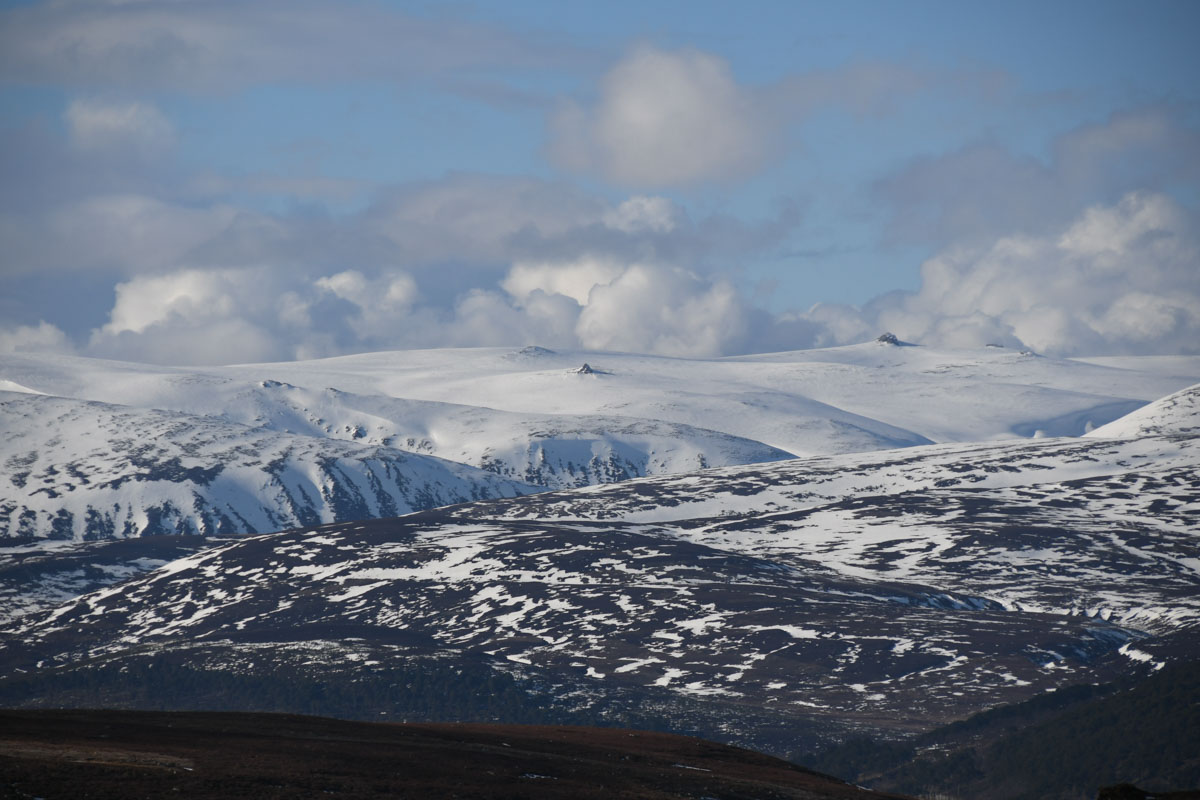 Rejoined the track at the stables. Winter unfit legs were complaining by this point and the last few km seemed to take a little longer than expected. Picked up a few litres of water from the last stream and headed for the camping gear.

Sunset was unspectacular, part obscured by clouds to the west. 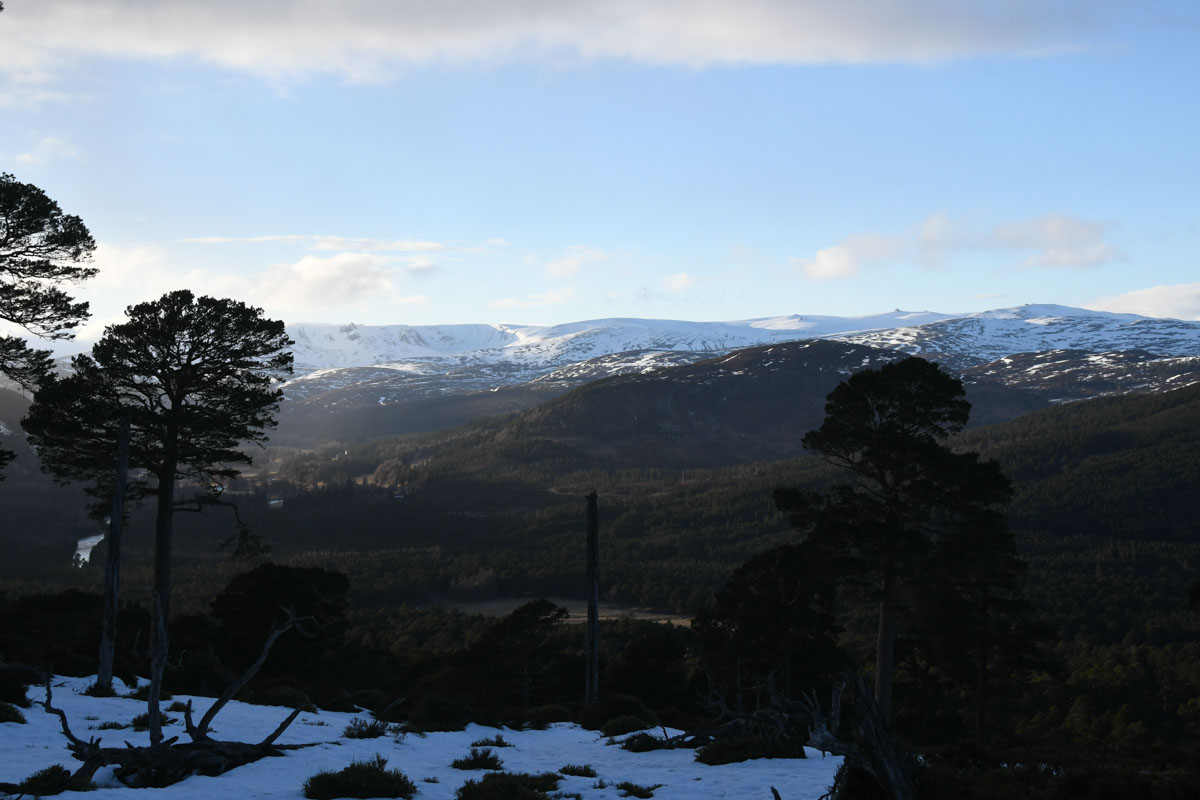 Got the tent up and settled in. It was great to be back out at a camp – it’s been far too long. 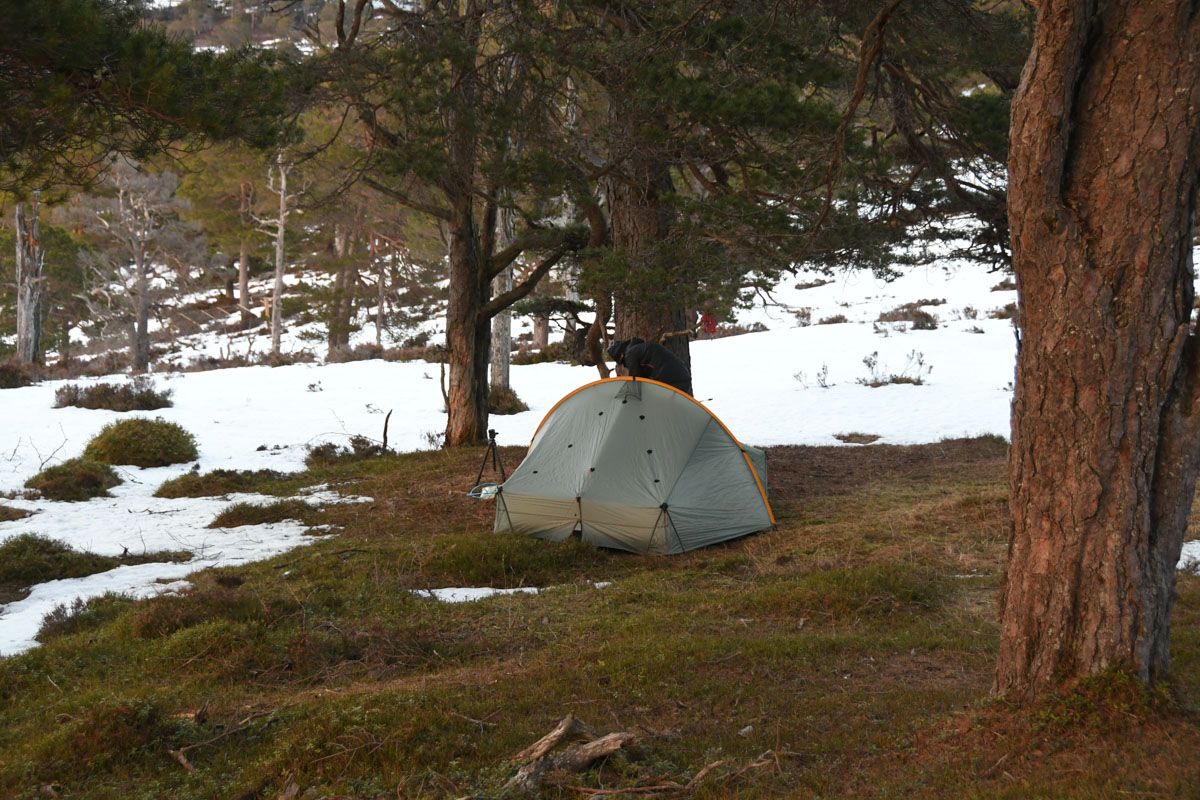 Slept well, the temperature was near freezing but warmer than expected. Heard the occasional Black Grouse call towards dawn but other than that the woods were fairly quiet. 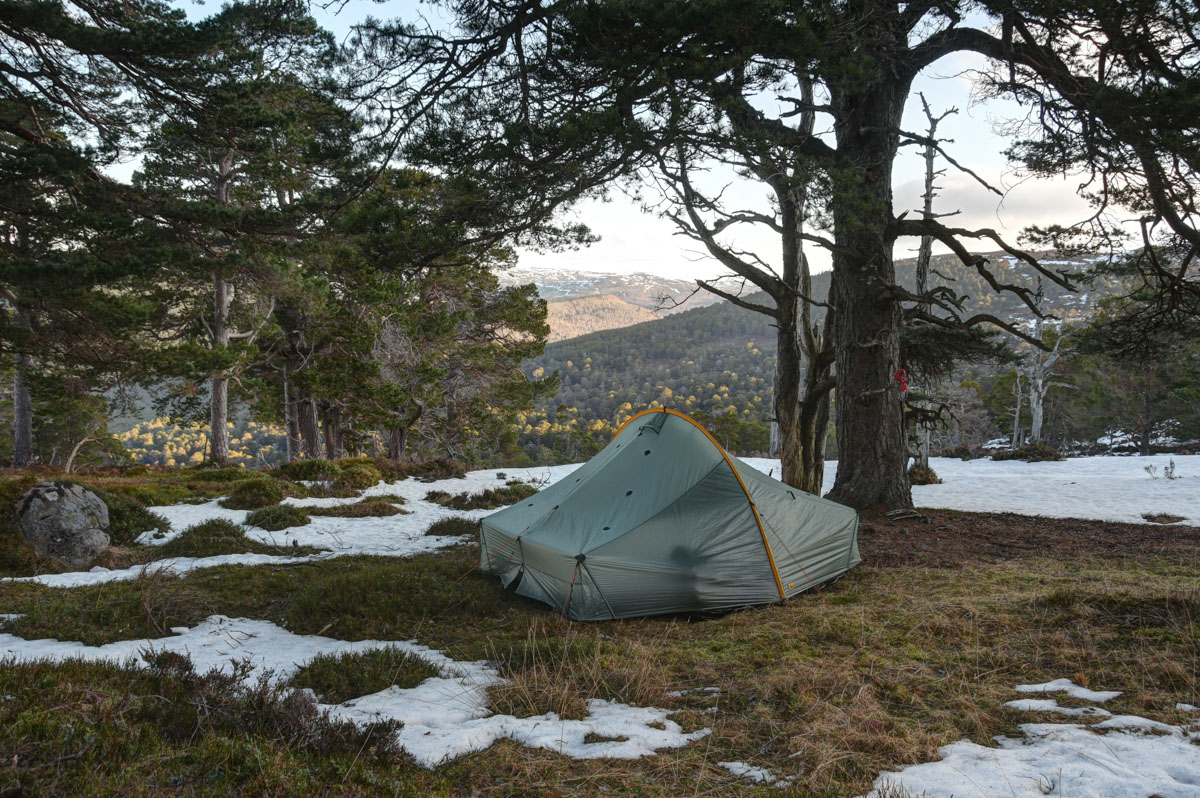 The Southern Cairngorms were clagged at dawn and for around 90 minutes after. They began to clear as we were striking the pitch. 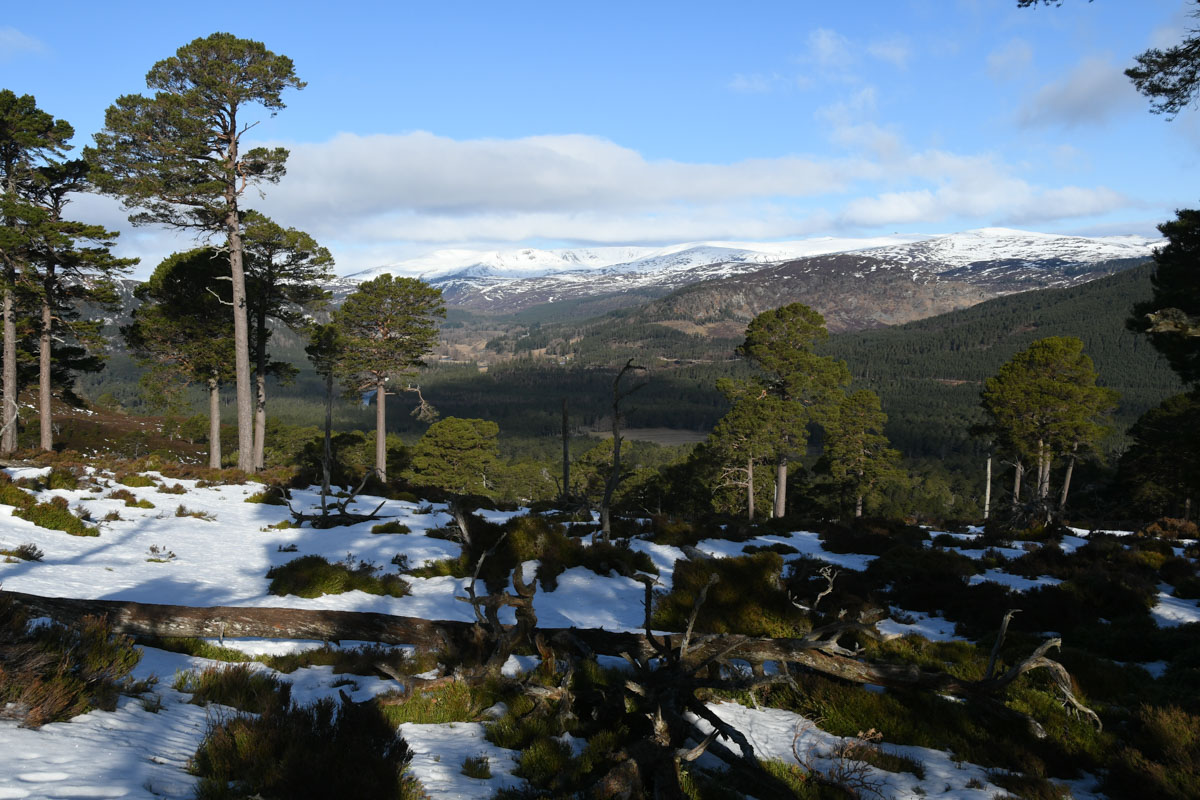 Headed down on another path to Garbh Allt Shiel, the noise of falling cones alerted us to a pair of otherwise quiet crossbills. The male was a lovely colour. 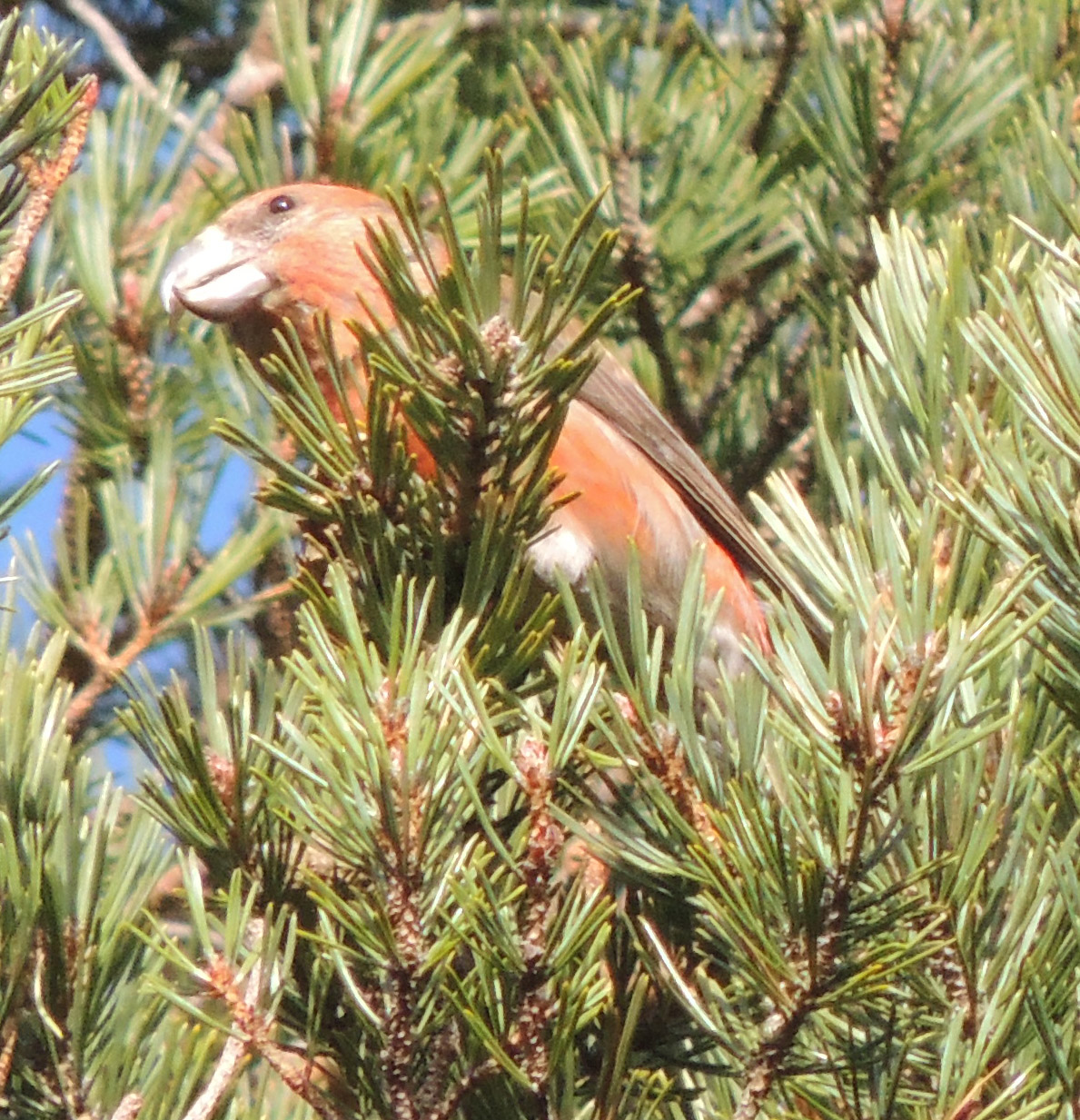 Plodded back to the car at Invercauld. 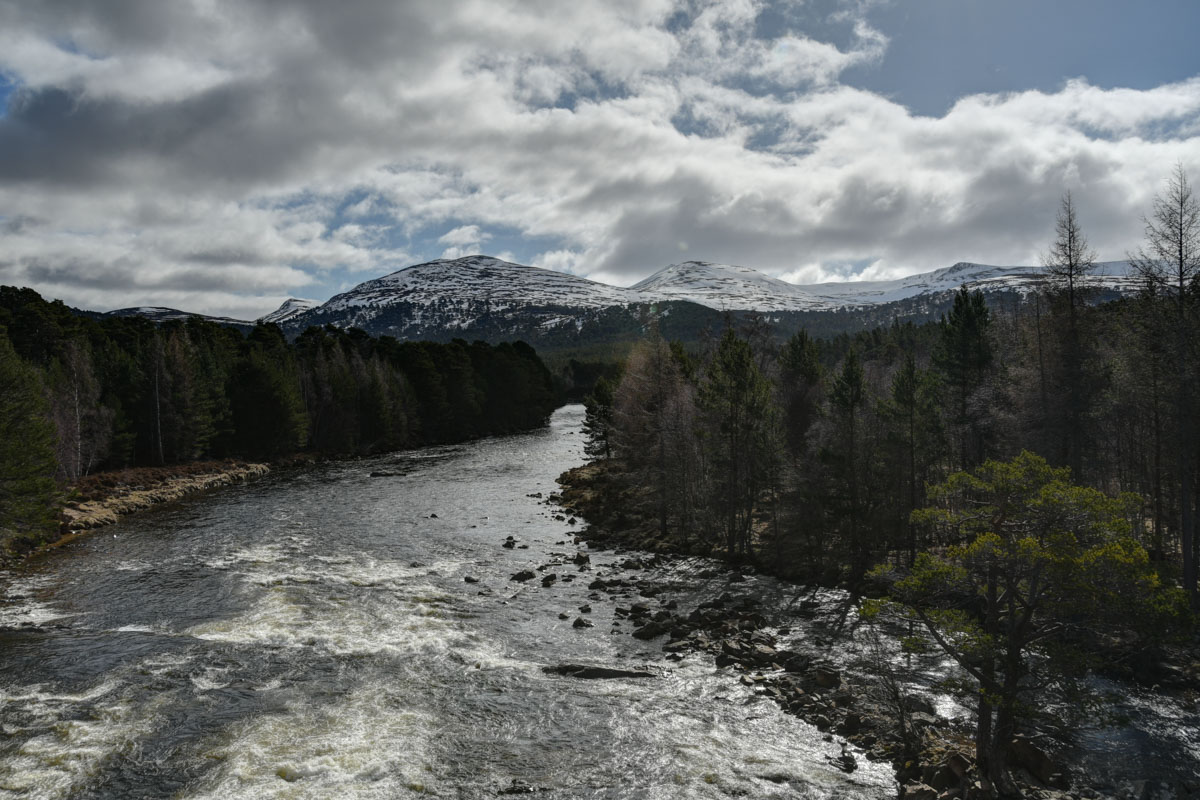 Had some lunch in the sunshine and dropped into Braemar on the way back. Considered nipping up the Cairnwell on the drive past but decided to head home with a variety of tasks pending.

Great to get the tent out again and nice to have a woodland camp for once. Hopefully the start of a better camping year than last year.