The forecast was for an improving day on Harris (although forecasting tends to be a little unreliable for the Outer Hebrides). Certainly a windy start. Had a relaxed breakfast and then drove out to Huisinis. Stopped on the way to get some supplies from the Honesty Shop at Amhuinnsuidhe.

Huisinis and its surrounds are sublime, probably our favourite place in Scotland. Parked up and got ready for a walk. We were considering walking round Traigh Mheilein to Crabhadail and then up Huiseabhal Mor if the weather improved a little.

The view south across the south beach and on to Ceapabhal: 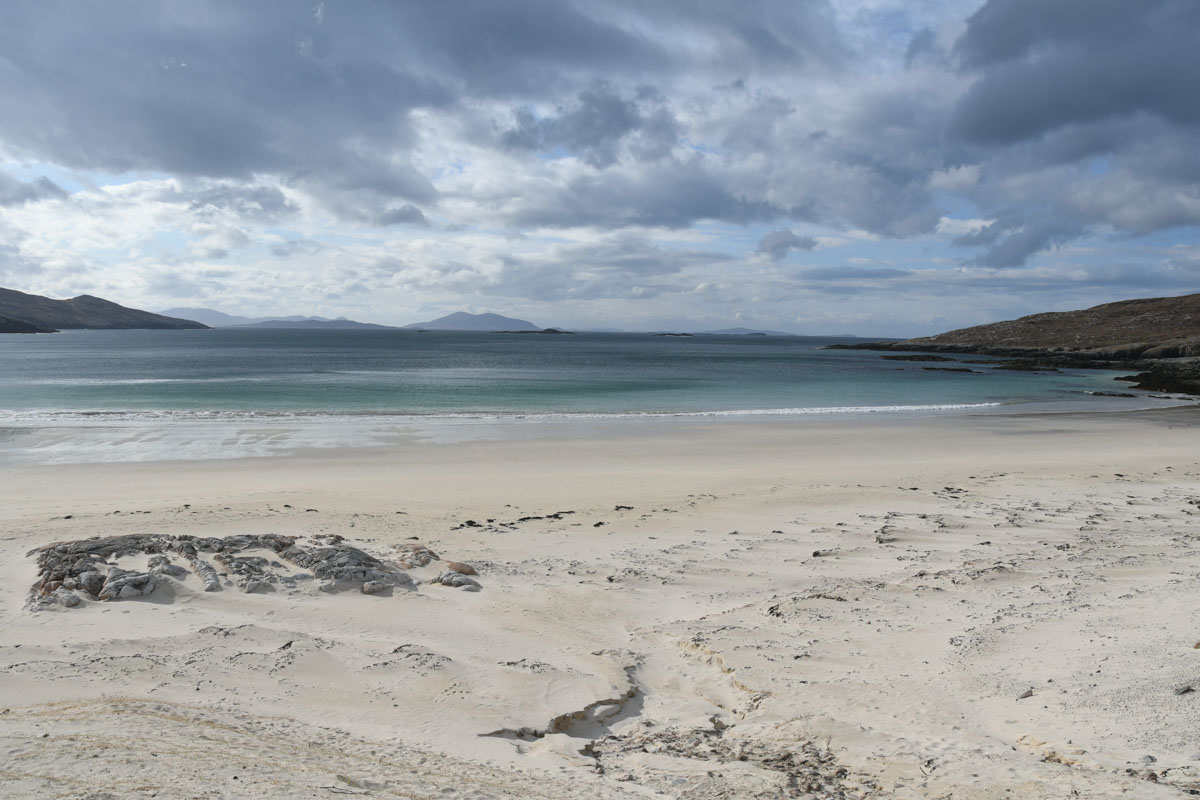 300m north across the machair and the well restored path to Crabhadail takes you out on the nort slopes of Huiseabhal Beag. Traigh Mheilein is often glowing in the sun from here. 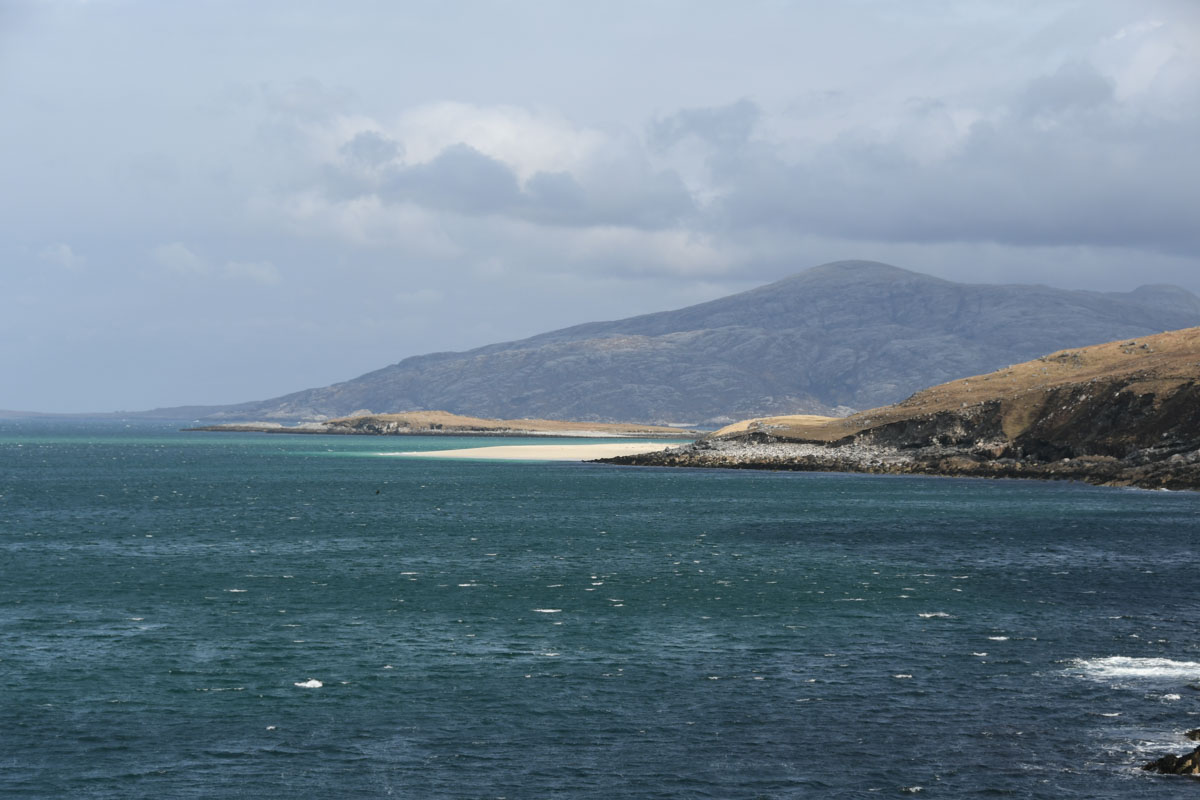 The path rises to about 85m before heading towards Greiscleit. A path splits off to head to Traigh Mheilein. 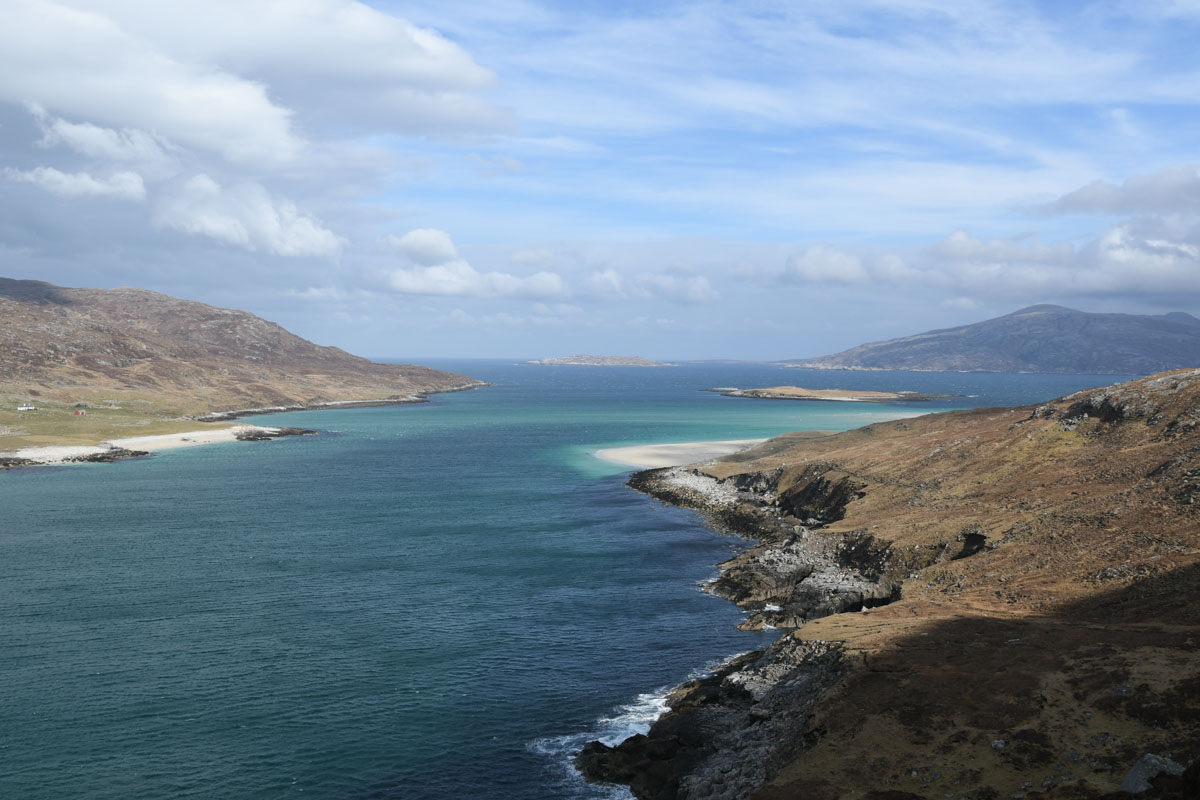 On to Traigh Mheilein and the day was very blowy, very chilly and very beautiful. Our favourite Hebridean beach. 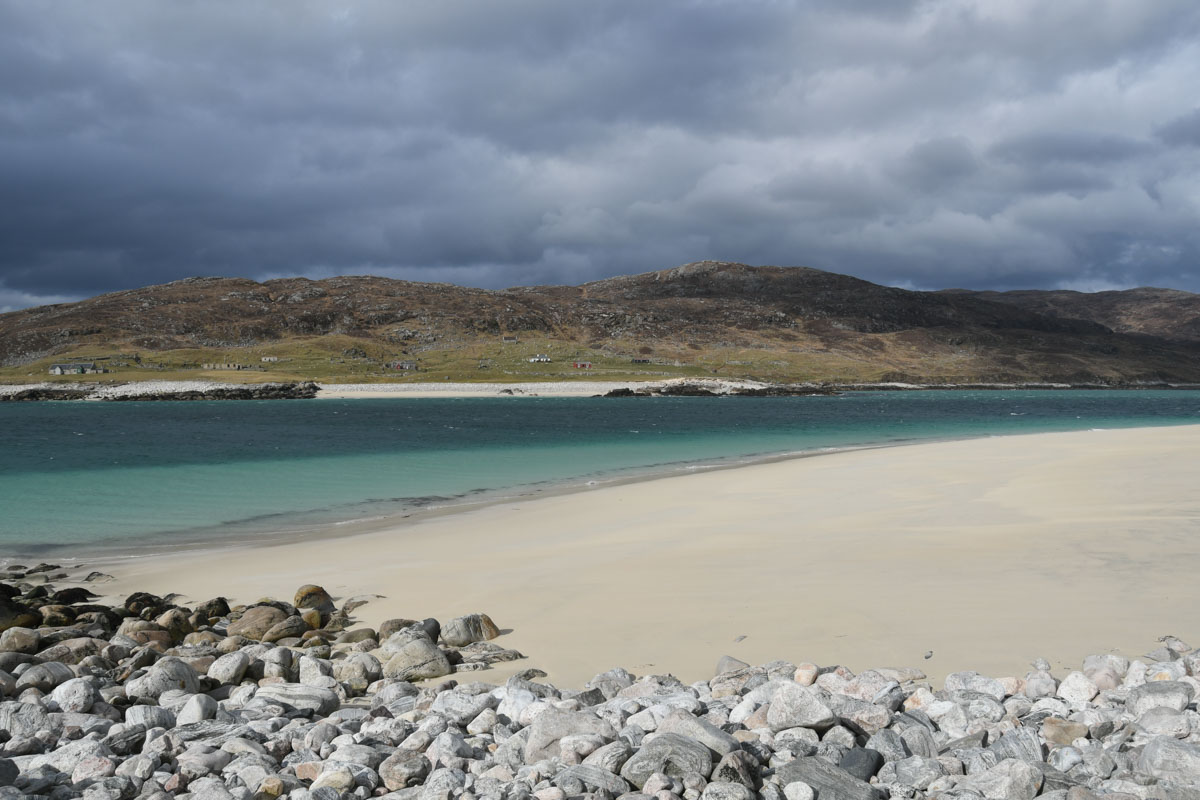 Walking along Traigh Mheilein we were walking straight into the wind, it was biting! To the NE Griomabhal makes a great backdrop – this hill is at the end of the Mealasta road on Lewis. Only about 7km across the water, but a 125km drive. 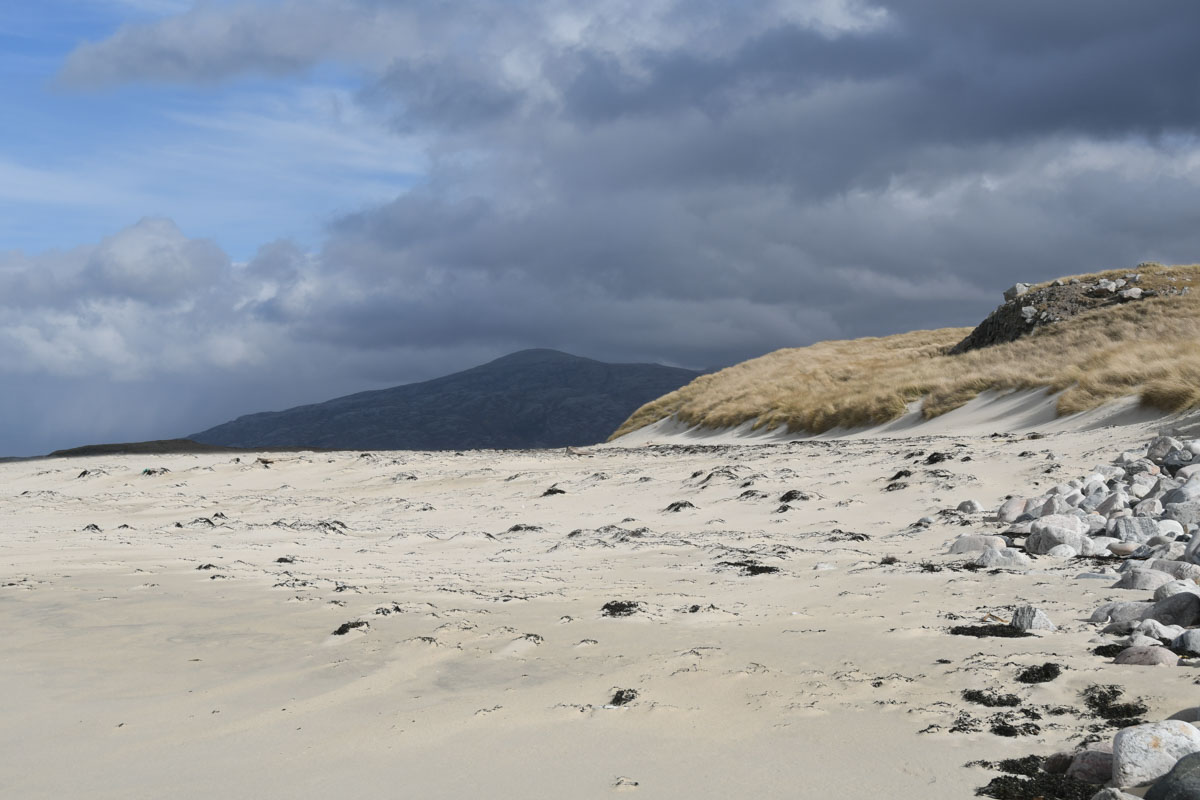 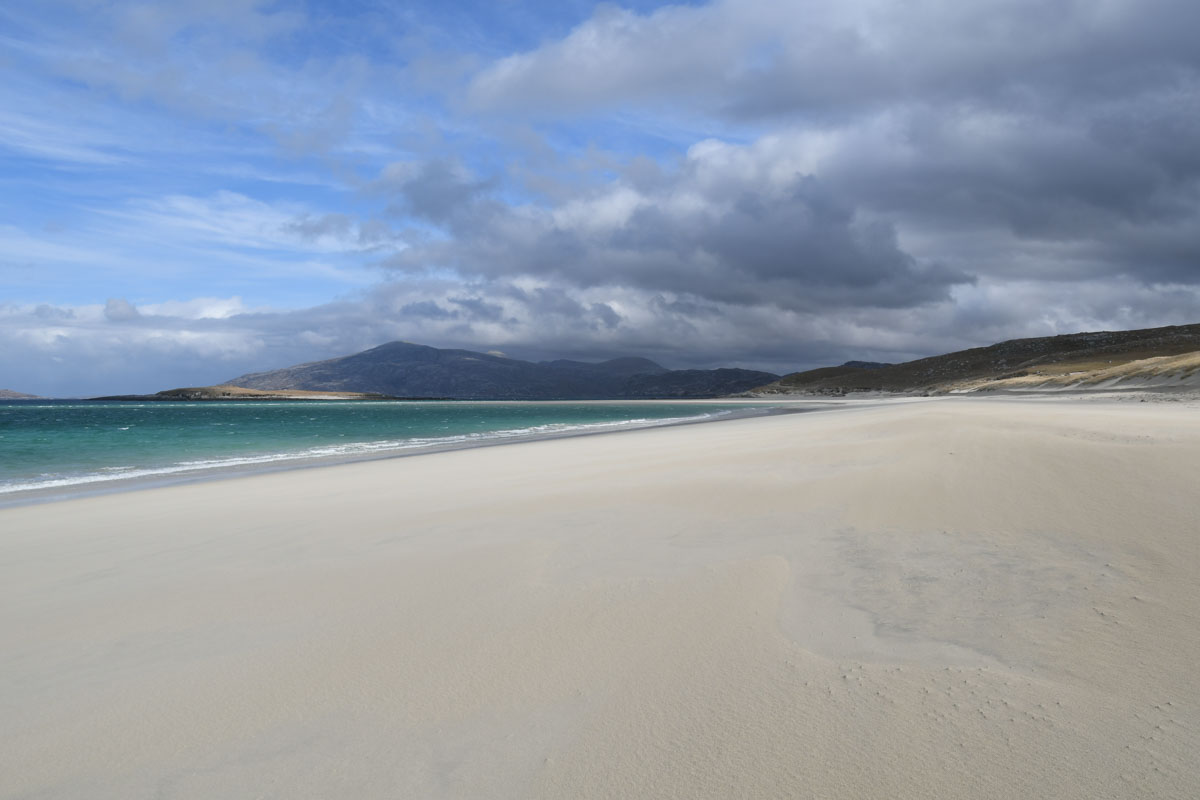 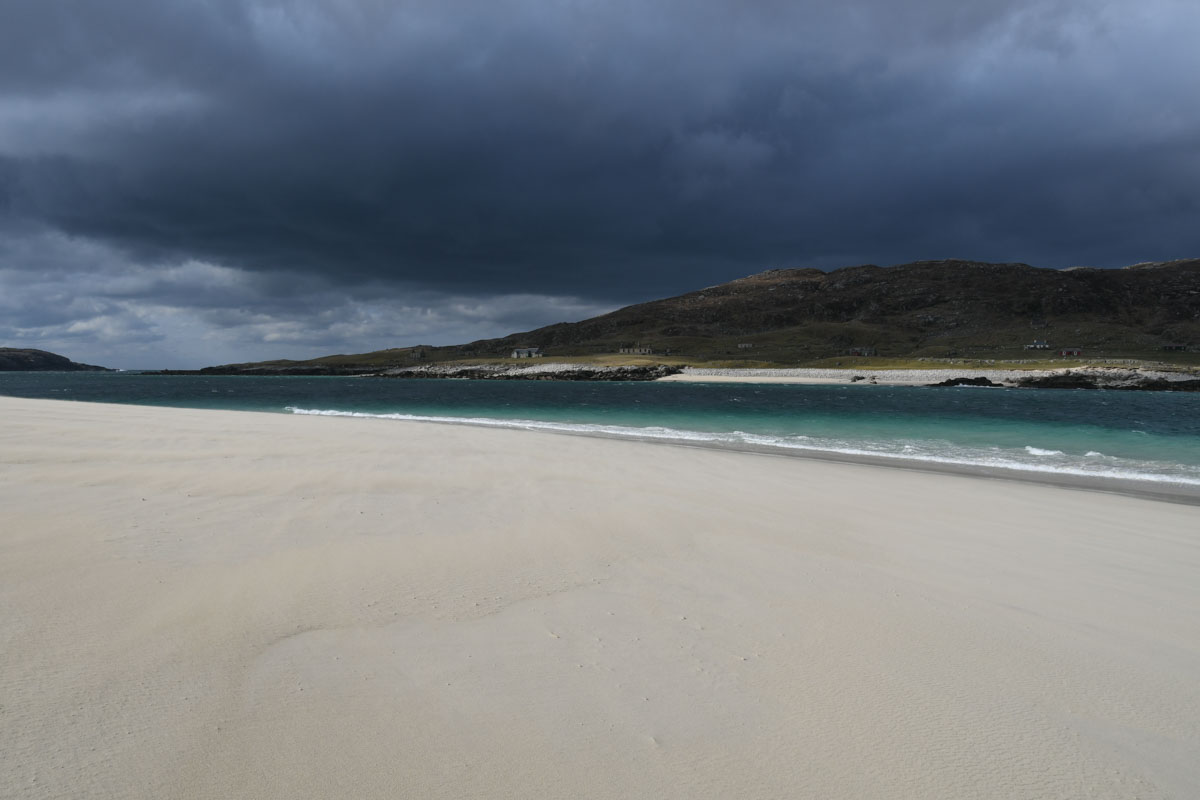 Unforecasted showers were pulsing by. If anything they were building rather than diminishing. 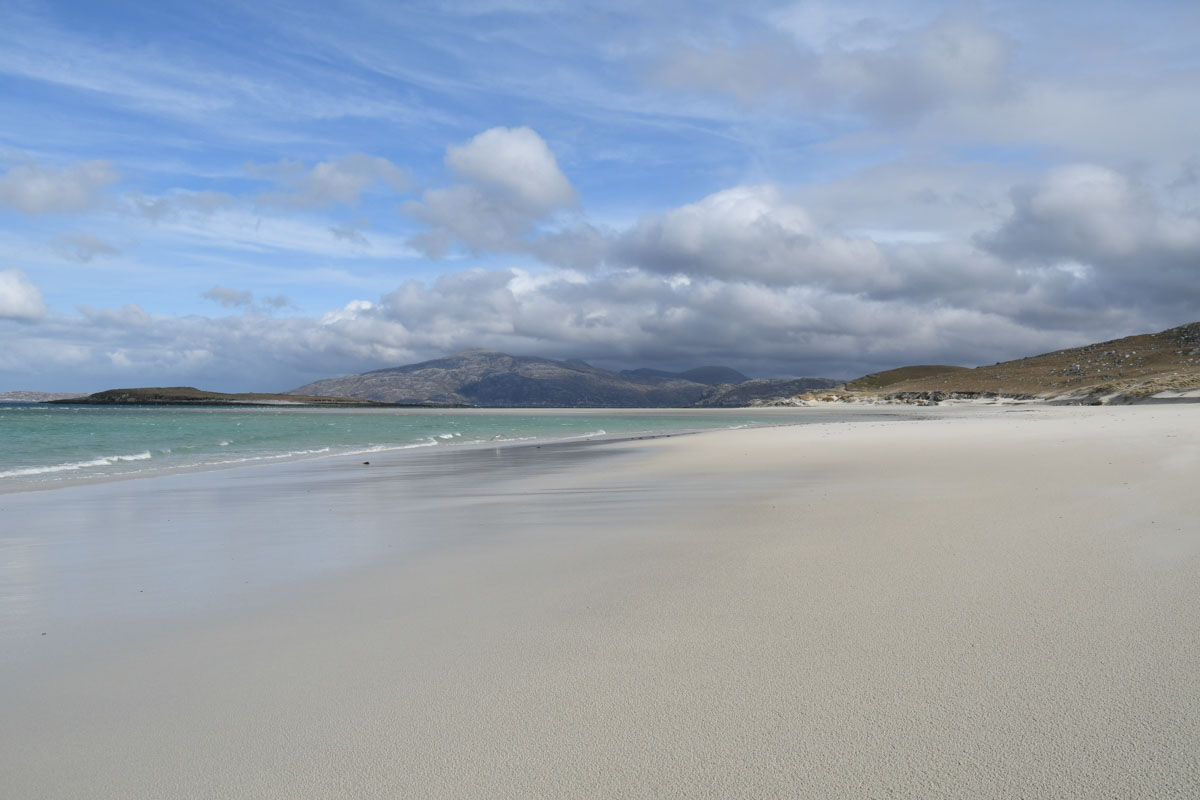 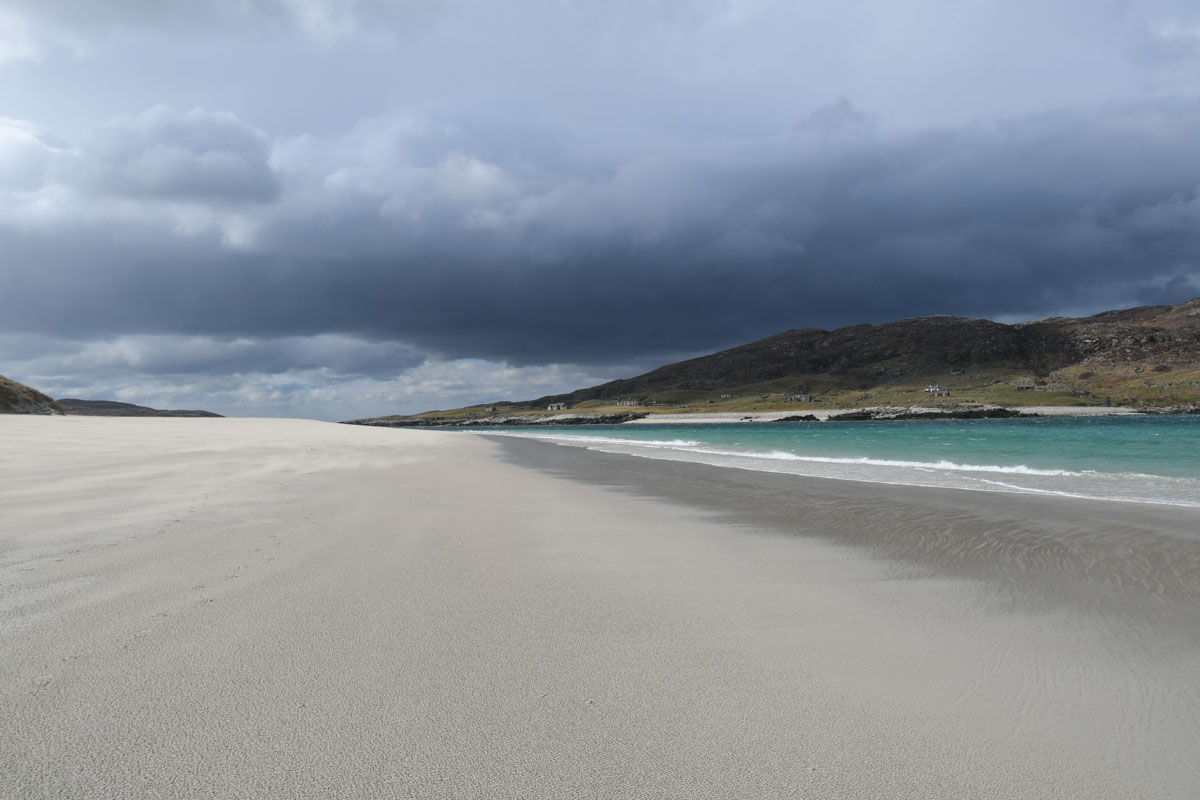 Along at Rubh’ an Tighe we got into the lee slope of the big grassy bank and had a bite to eat. Windspeeds were high and the hills were clagged – it wasn’t looking as though a visit to Huiseabhal Mor would be rewarding. 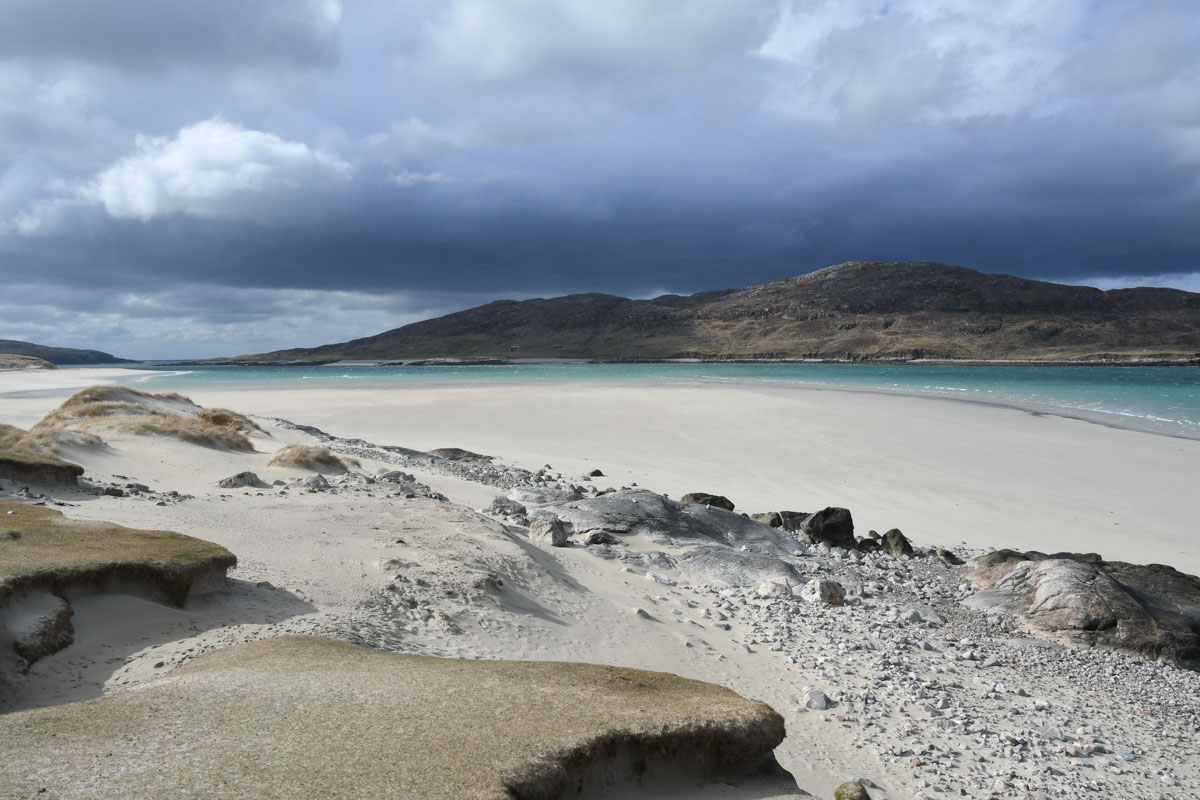 The easterly wind seemed to be howling straight down Loch Reasort and onto us. 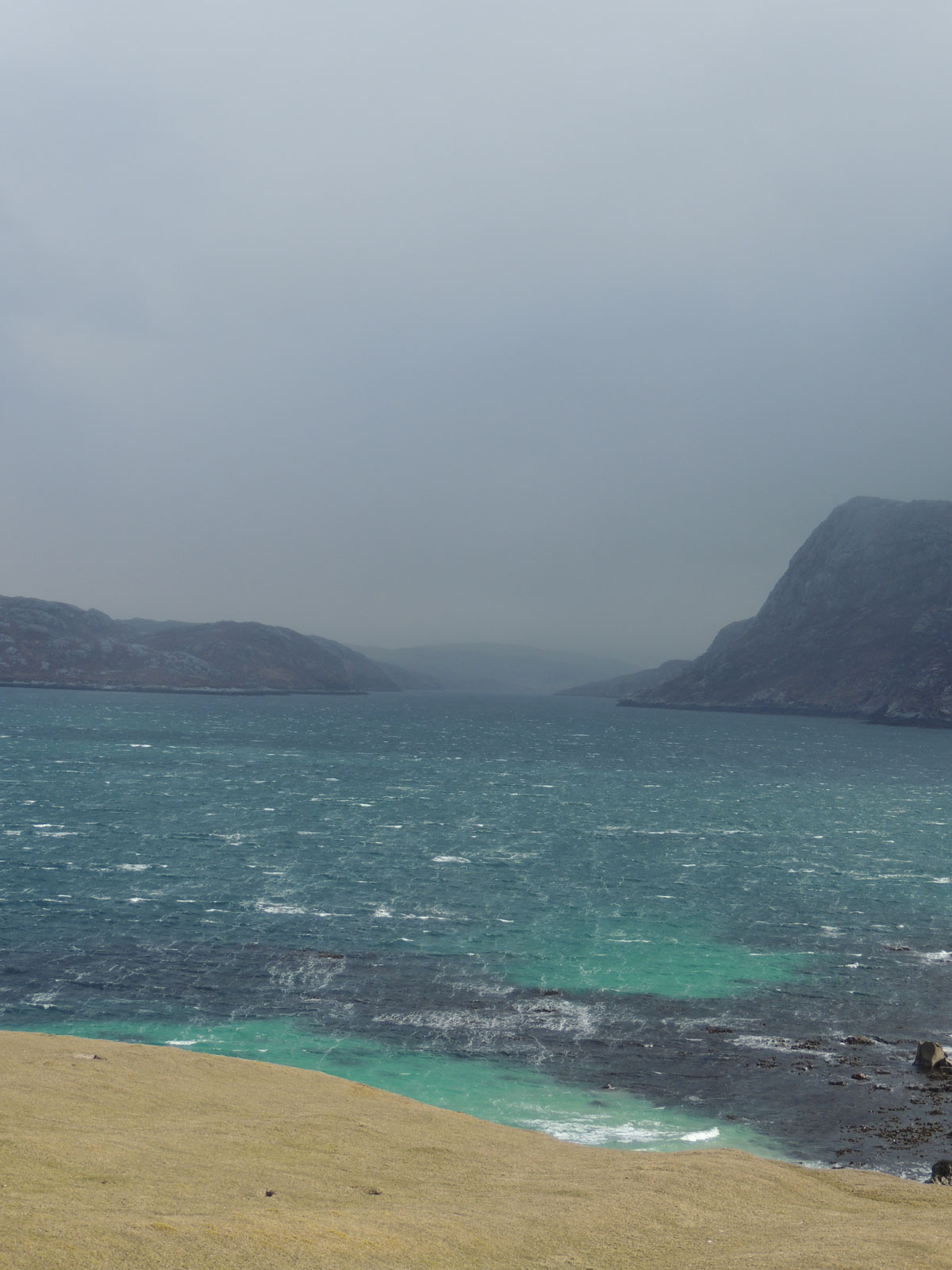 We started to head to Crabhadail, but it then proceeded to rain for 45 minutes. Decided to amble back to the car and, if there was improvement, consider a hill after.

Quite a spell of dampness, so much for an improving day! Things started to clear a bit as we got back to Huisinis. 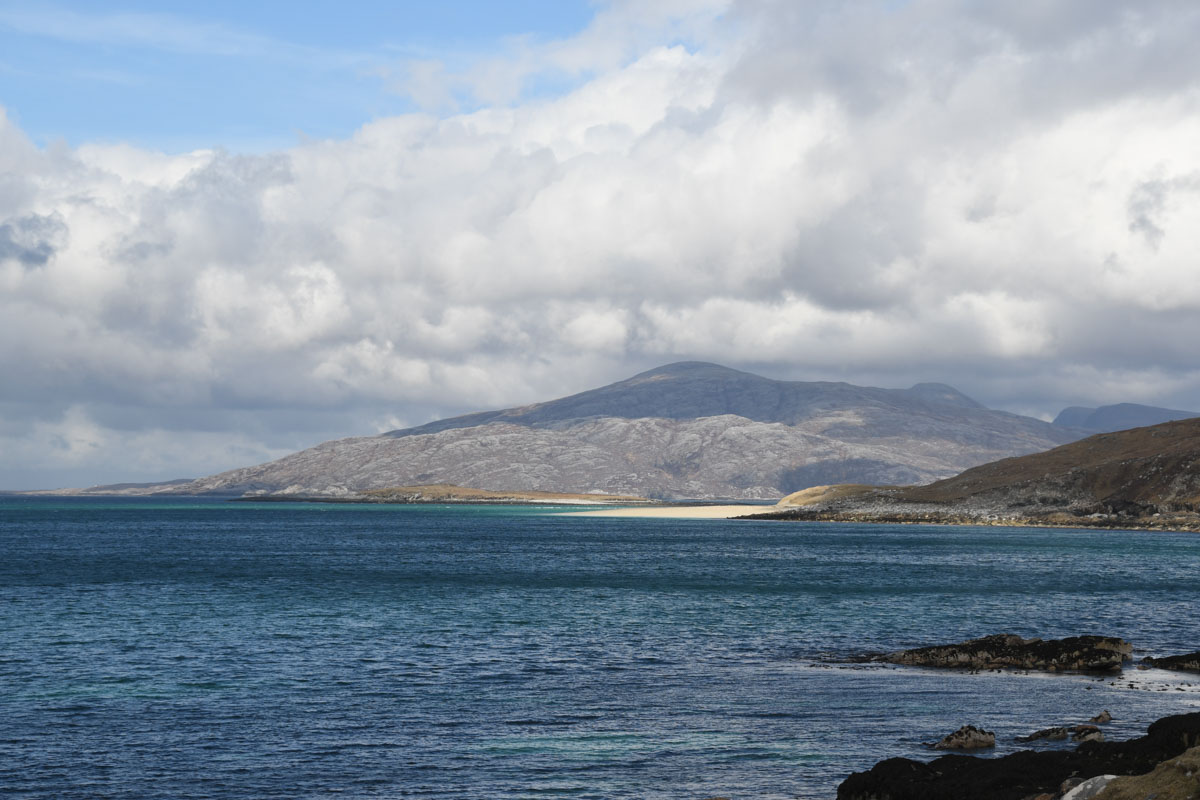 Enjoyed the sun and the views for a while before heading onwards. 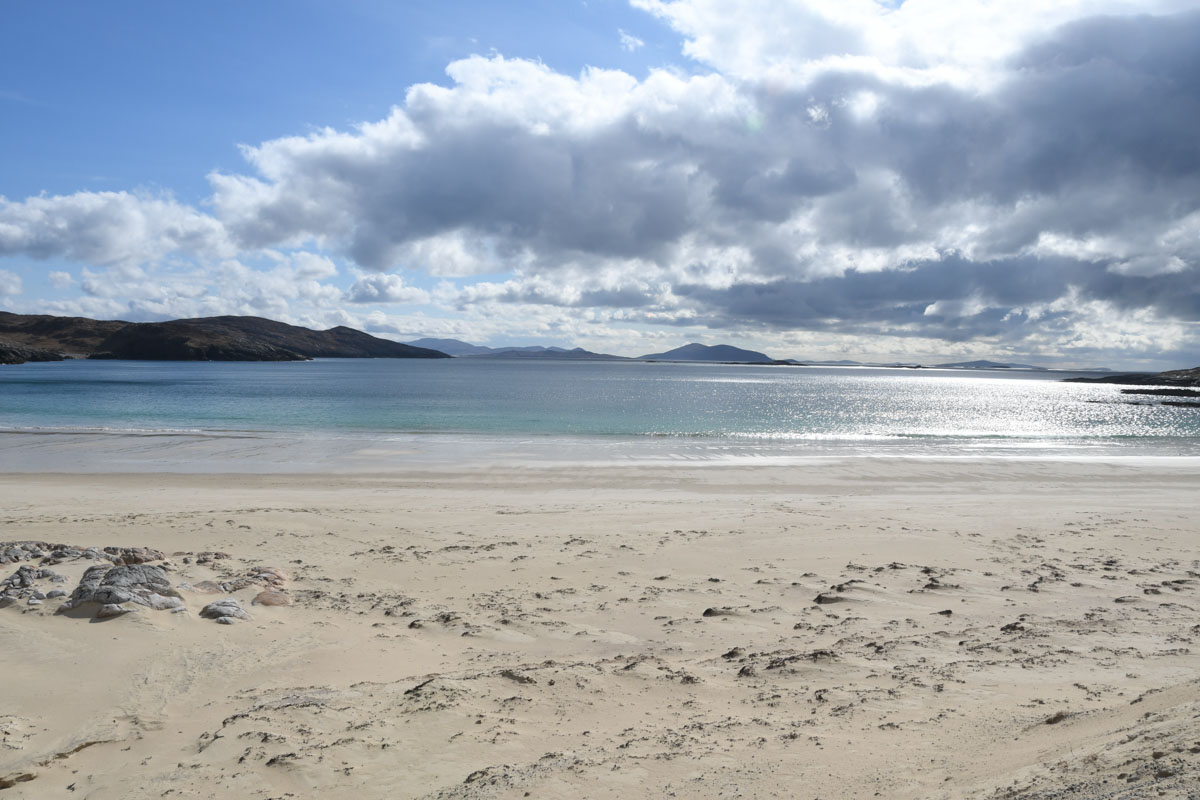 Drove round to Losgaintir, hoping the western skies would clear for a sunset. Decided to head up Beinn Dubh again – it’s a cracking wee hill. Quickly visited Traigh Rosamul before heading uphill. 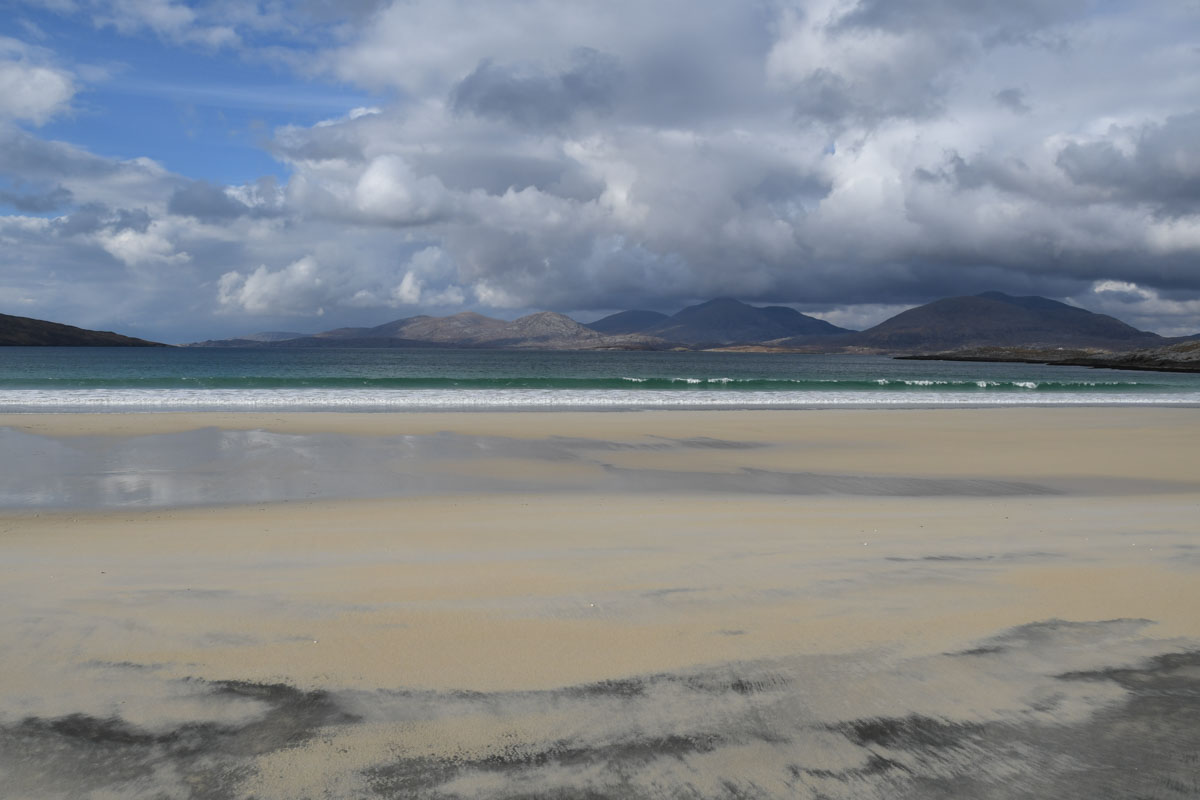 There’s a couple of gates in the wall and then it’s a straight yomp up the hill. 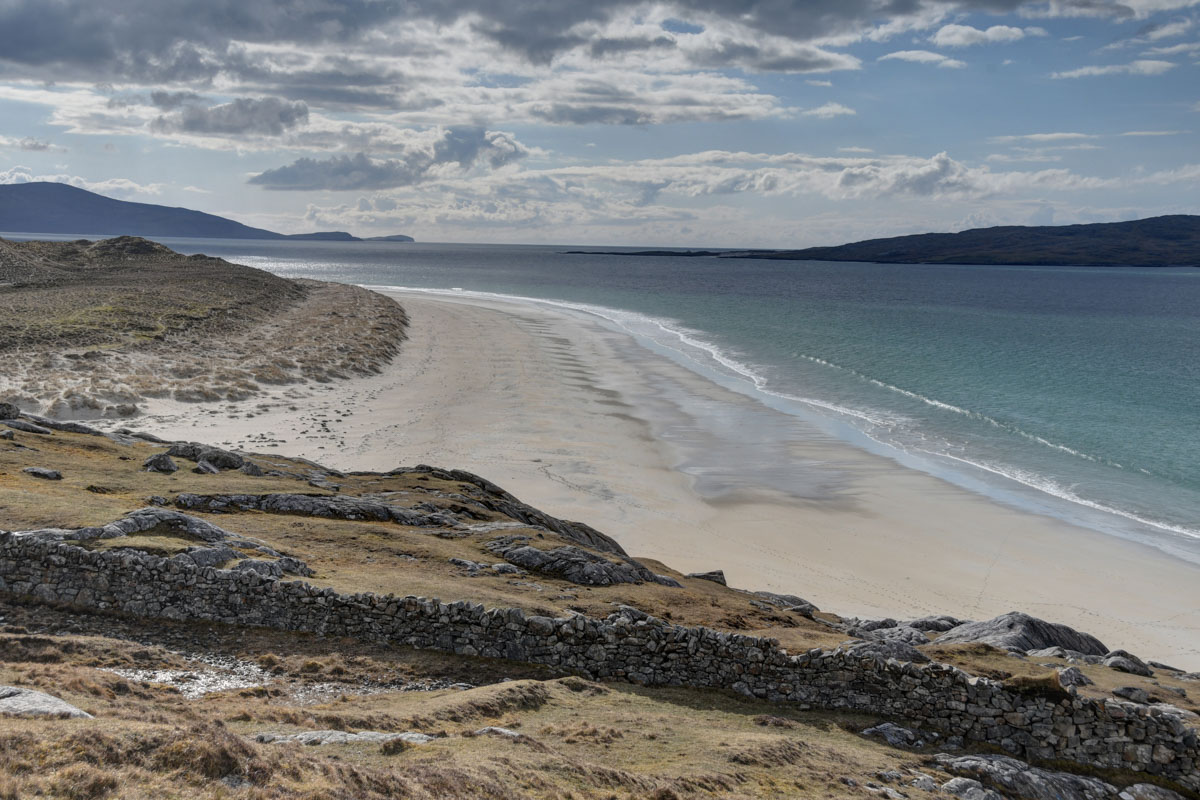 Had a few hours to sunset so we could take it easy. The tides weren’t ideal – best time to summit Beinn Dubh is lowish tide to get the whole of Luskentyre beach exposed. We were near high tide.

There are nice views to the South Harris hills. 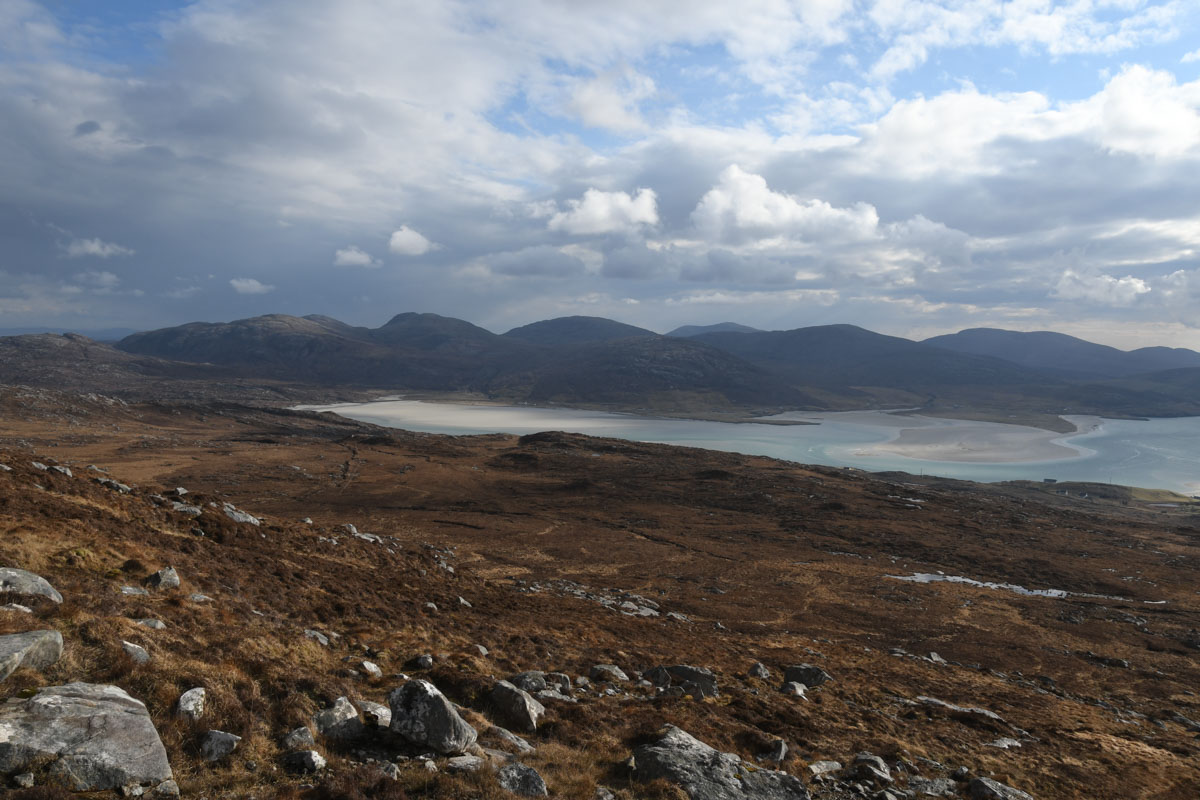 It’s the sea views that make these hills great viewpoints for me.

Ceapabhal and sea from Beinn Dubh: 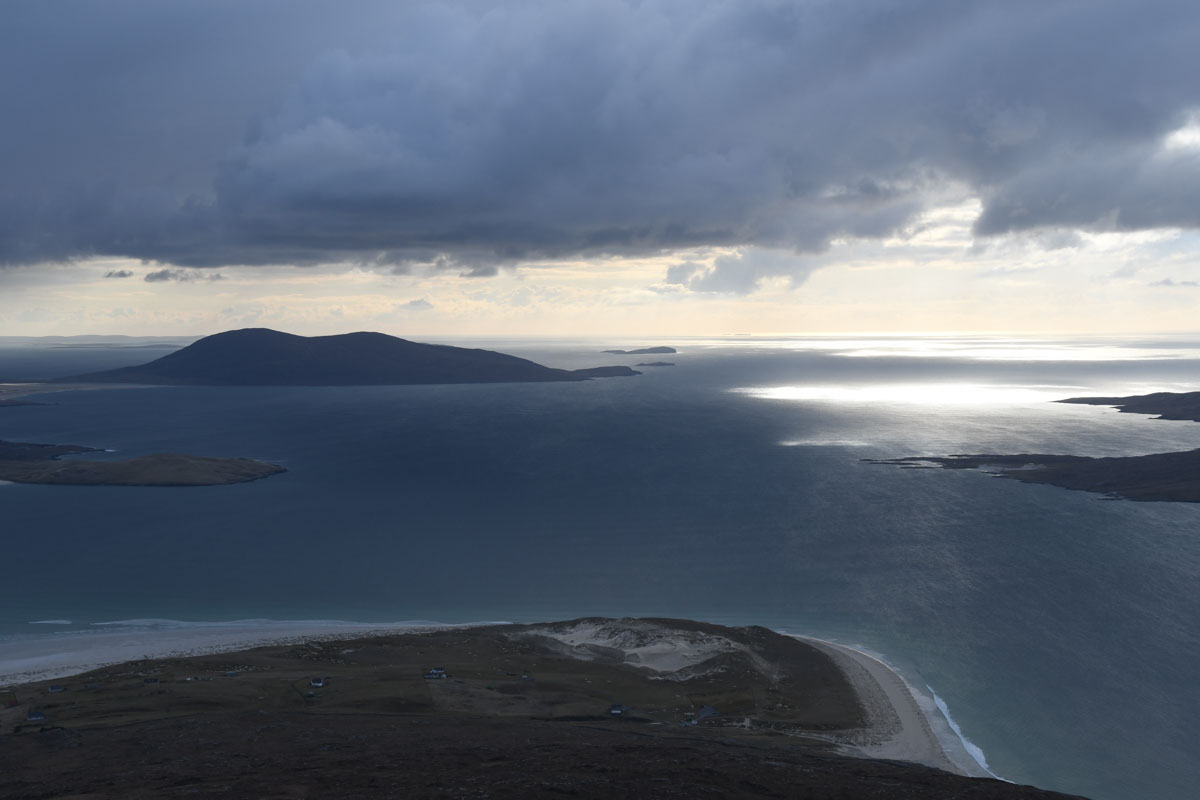 Up to the summit the north Harris hills were a little clouded. Sgaoth Aird and pointy Sgaoth Iorsal were clear. 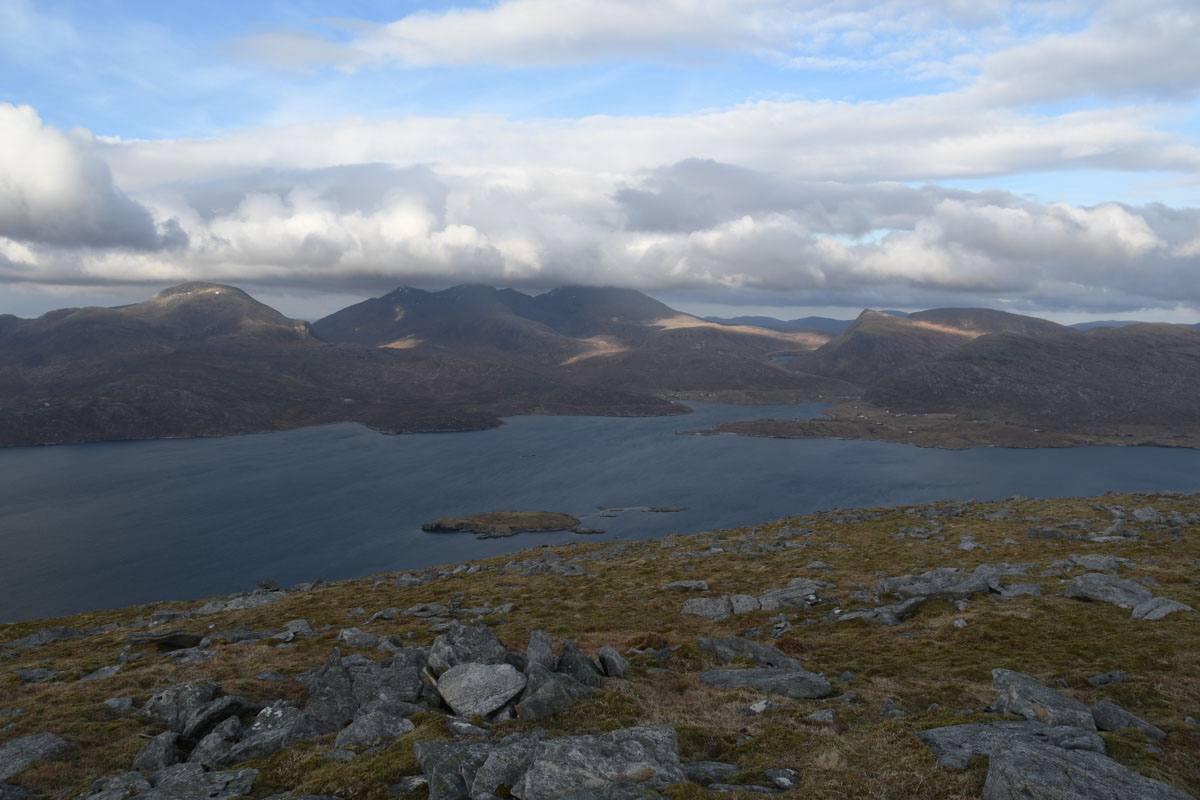 There’s a nice view of the bigger Harris hill group stretching out to Huisinis.

Hills and Huisinis from Beinn Dubh: 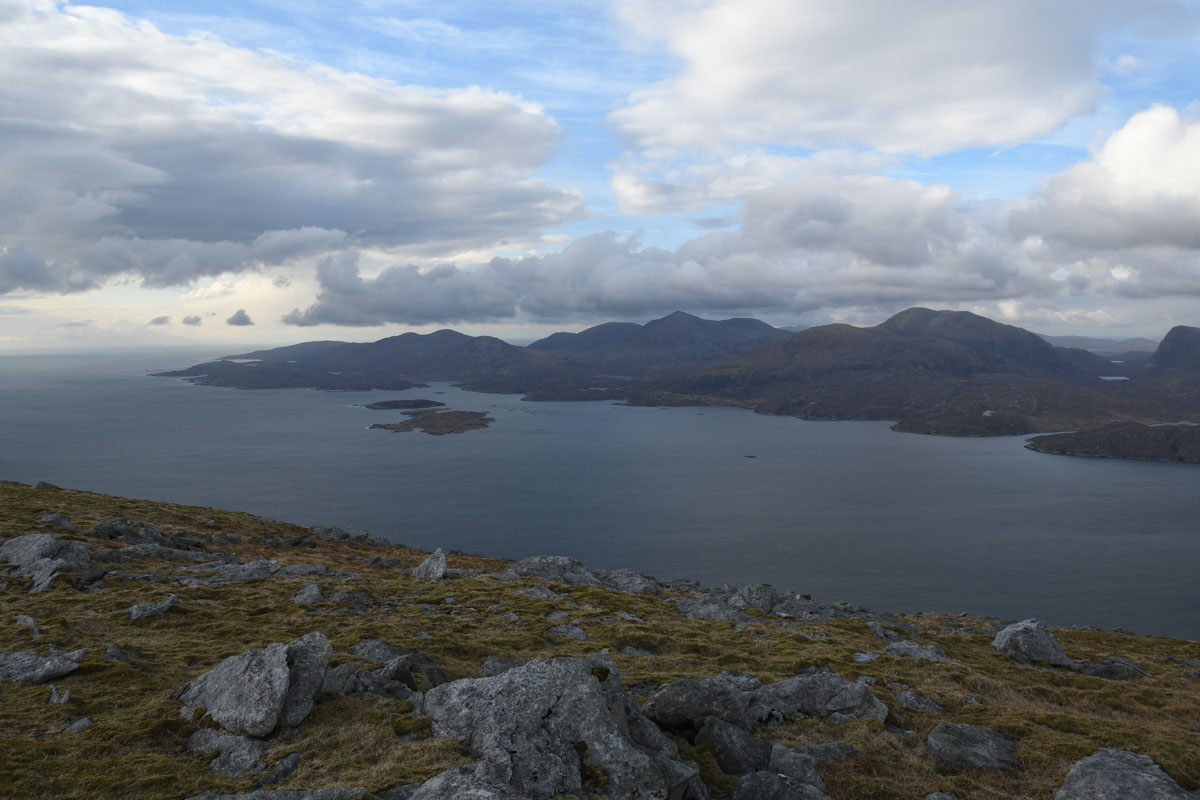 Luskentyre was mainly under the tide. 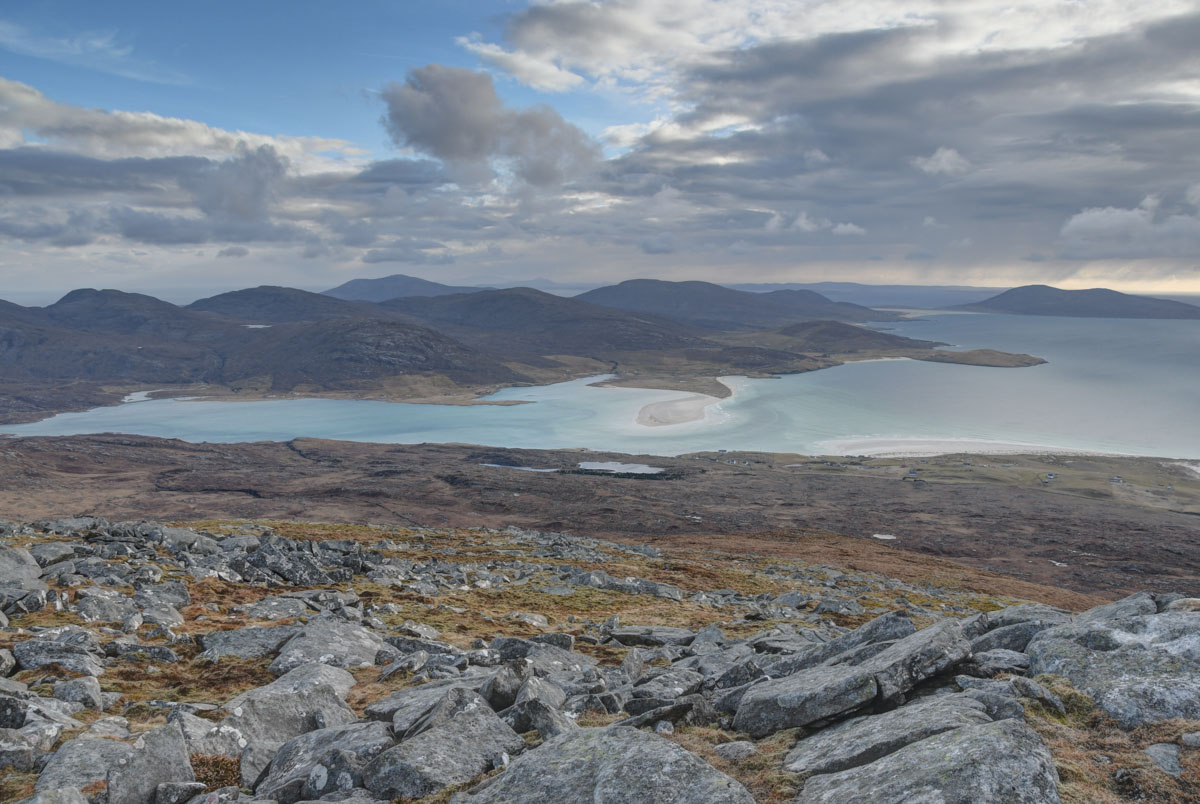 As the sun got a little lower in the west we could make out Hirta, Soay and Boreray of St Kilda, not as clear as the day before.

Dropped back down towards sunset, which was a little obscured by cloud. Did meet the Luskentyre ponies. They came trotting over, I suspect they are bribed for photo shoots often. 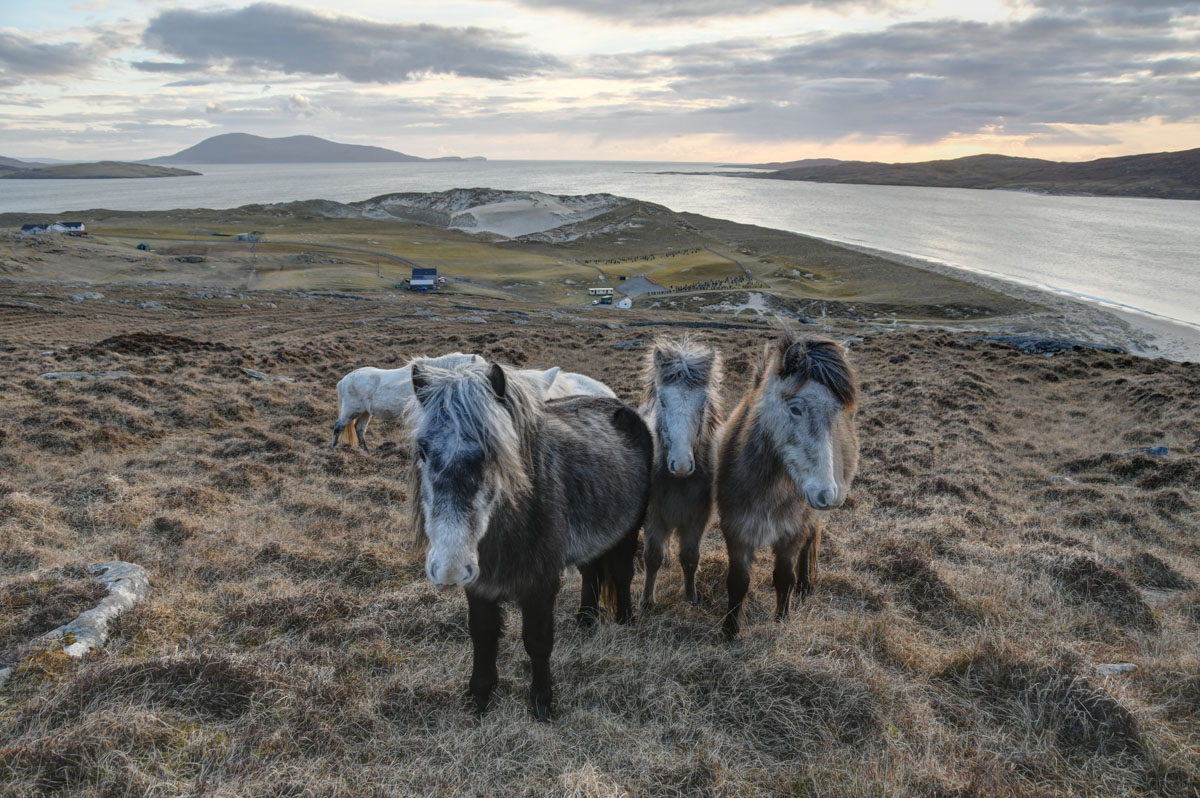 A nice day. Good to visit a couple of old favourites.