Activity always seems to drop off in the summer – after a run of superb weekends into early July the weather turned to so-so. Add busy roads, busy expensive accommodation, clegs and midges and we tend to see more of Edinburgh than we like in high summer.

The forecast for Saturday had looked very poor – but as the day approached it was looking pretty reasonable, if rather overcast.

Headed up to park at Morvich at 0800. A still, overcast day – surprisingly almost no midges as we got our boots on.

A few years ago we ascended Sgurr Fhuaran from Glen Lichd using a stalkers path at NG 988 186. The nice looking east ridge of Sgurr Fhuaran was another ascent that had been on the “to do” list, so off we went.

The track down Glen Lichd is signposted at the Outdoor Centre. Wandered along the good track looking at reflections. 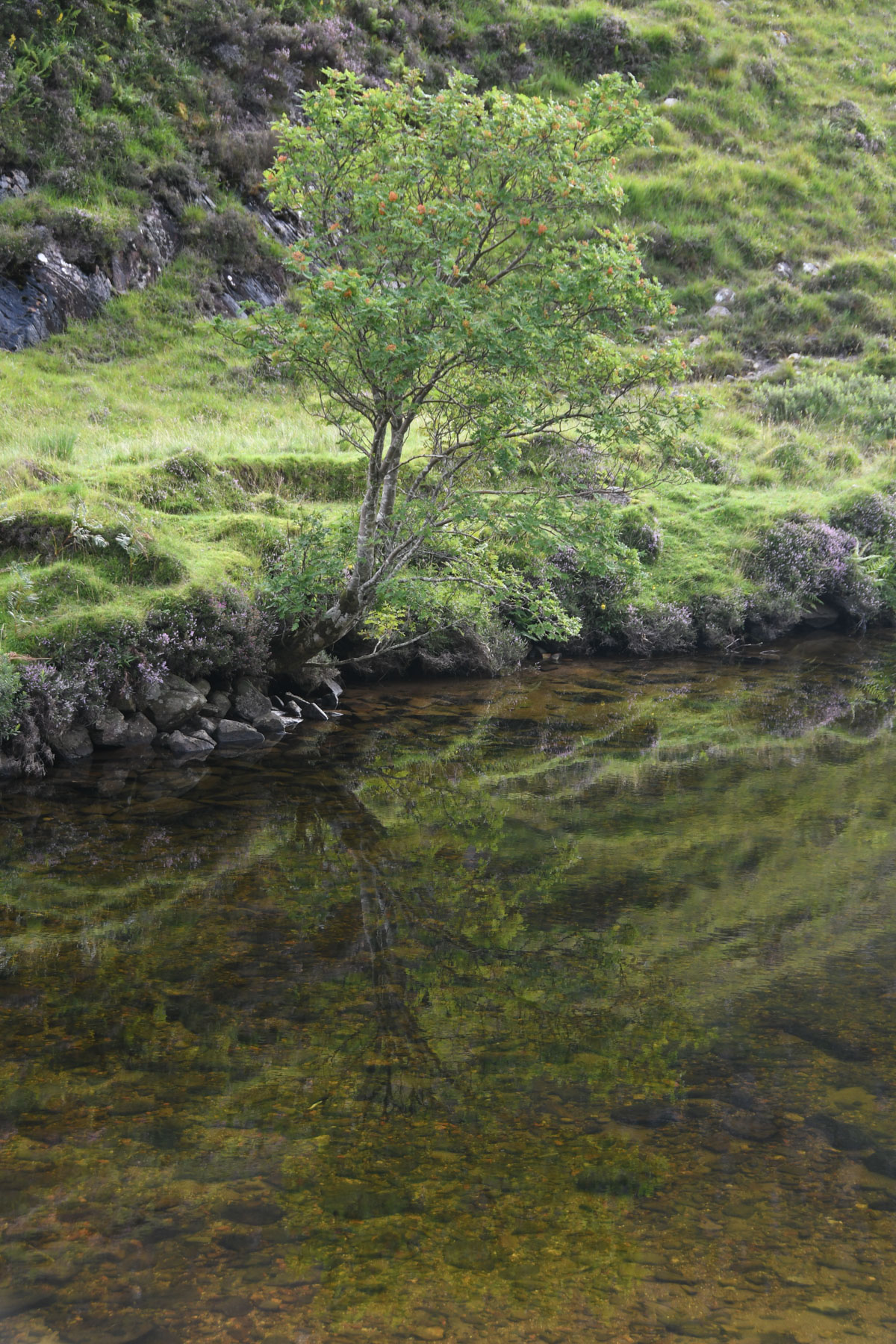 Glen Lichd forms part of the relatively new Affric Kintail Way, it is a rather nice glen, far from any traffic noise. 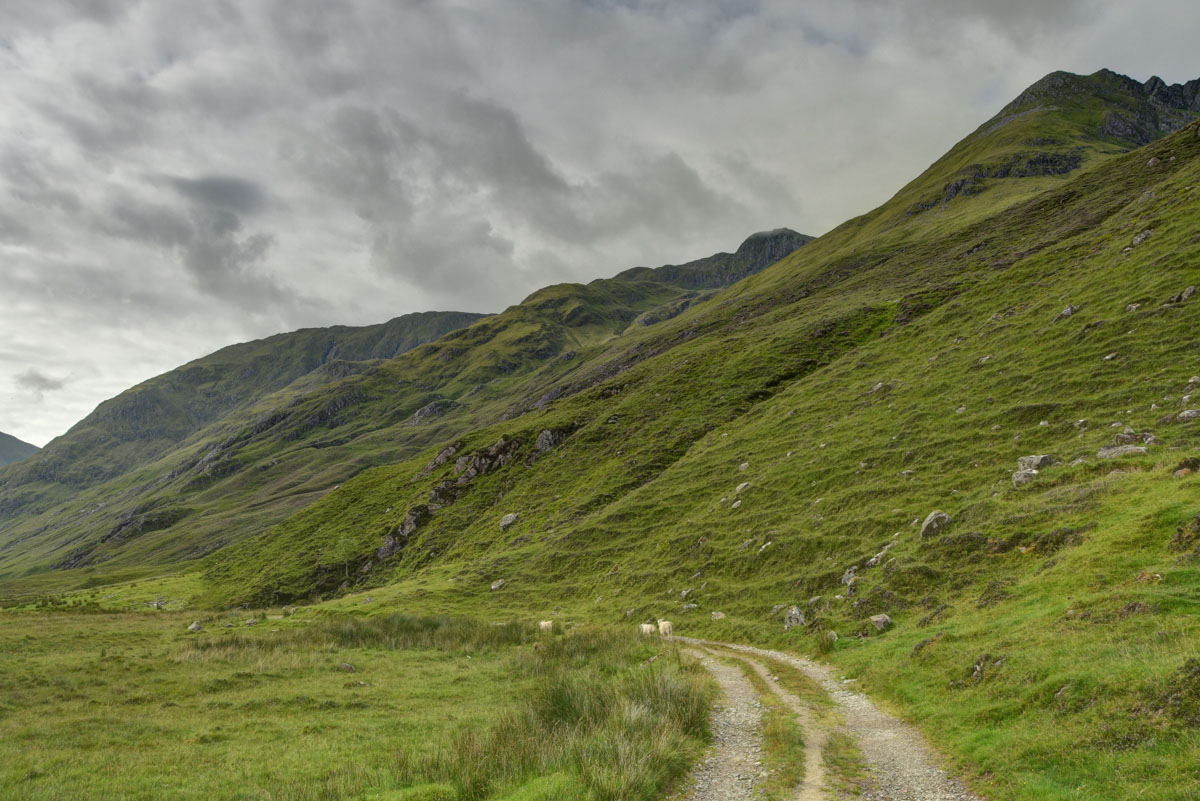 The spiky ridge running north-west from Sgurr Fhuaran caps the skyline high above.

Up to the ridge: 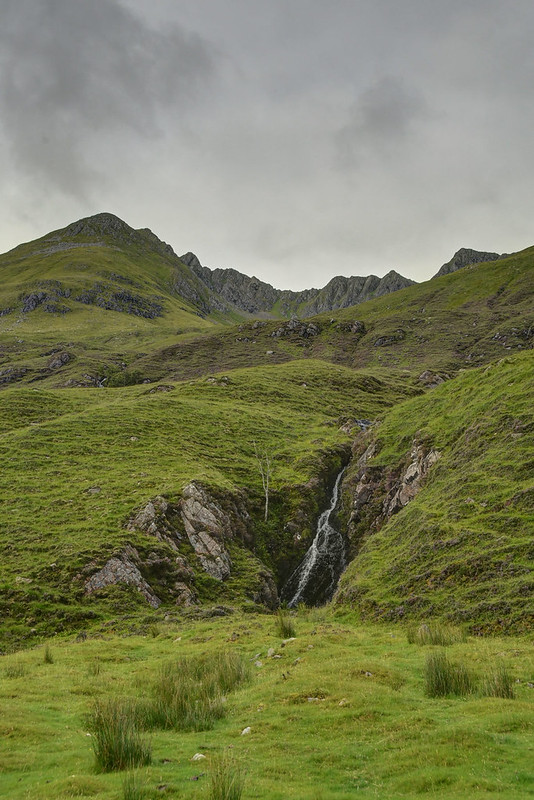 Looking back the Corbett Sgurr an Airgid stands at the end of the glen. A firm favourite.

H and Sgurr an Airgid: 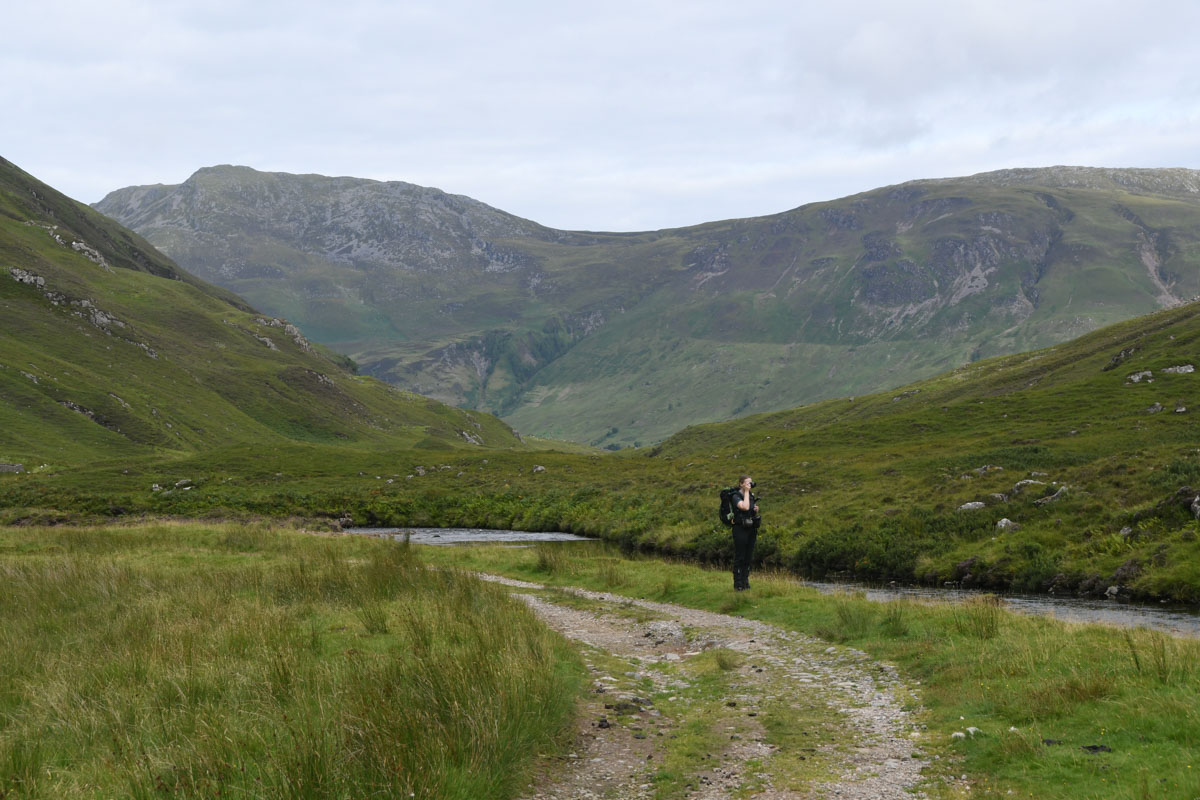 At NG 988 186 the stalkers path we used last time is faint but visible zig-zagging up the hill. This is shown on the OS 1:50k bit not the 1:25k for some reason. This time we were carrying on along the glen.

The previous route up: 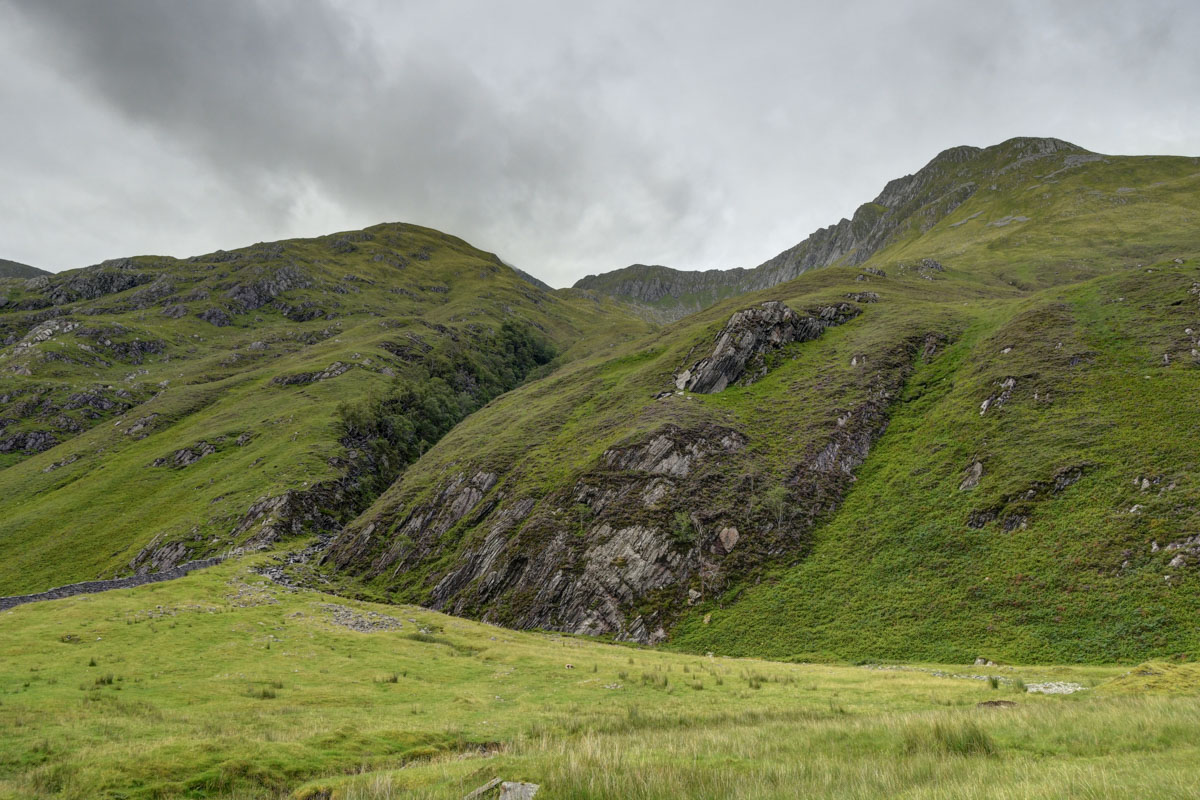 Relatively sparse wildlife in the glen – a family of dippers and sand martins. Some nice tent pitches, although it is grazed by sheep and cattle. 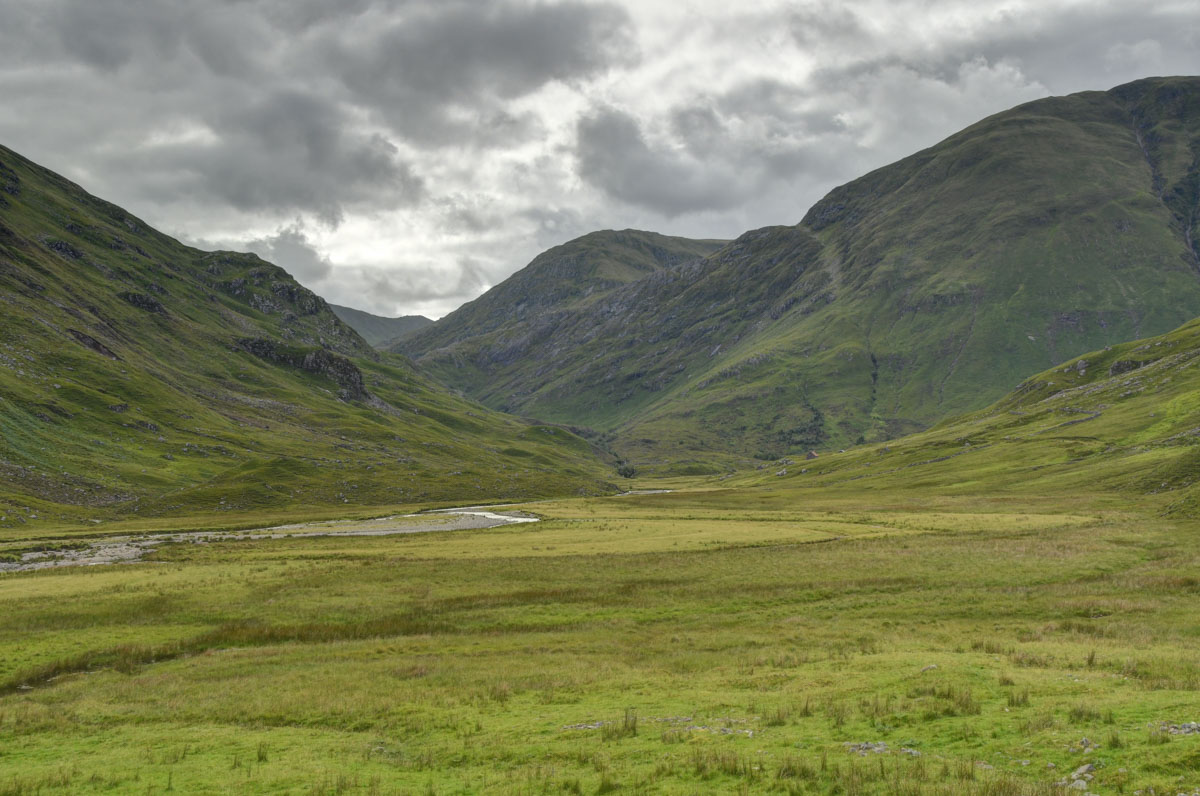 Glenlichd House turned out to be a small cottage – a car and an argocat suggested someone on the NTS staff was around although we didn’t see them. 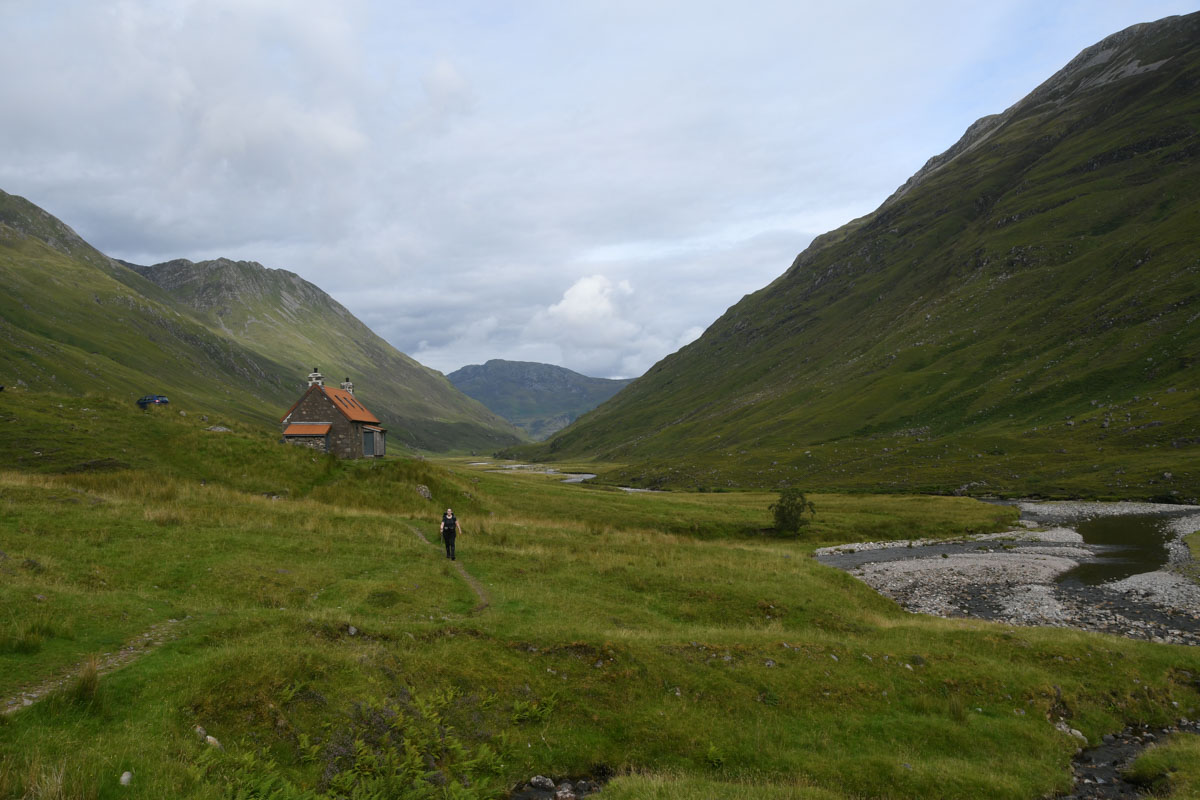 Passing a few hundred metres past Glenlichd House we took the right hand turn before the bridge to follow a wee path south a for about 5 minutes before turning directly uphill up the east ridge of Sgurr Fhuaran.

This bit was standard for Kintail……steep! Midge levels were only minor, but the deer keds were rather more abundant than usual for this time of year.

Behind us we developed views through the pass towards Glen Affric. Another route on the “to do” list is Beinn Fhada via its east ridge through this pass.

The pass to Glen Affric: 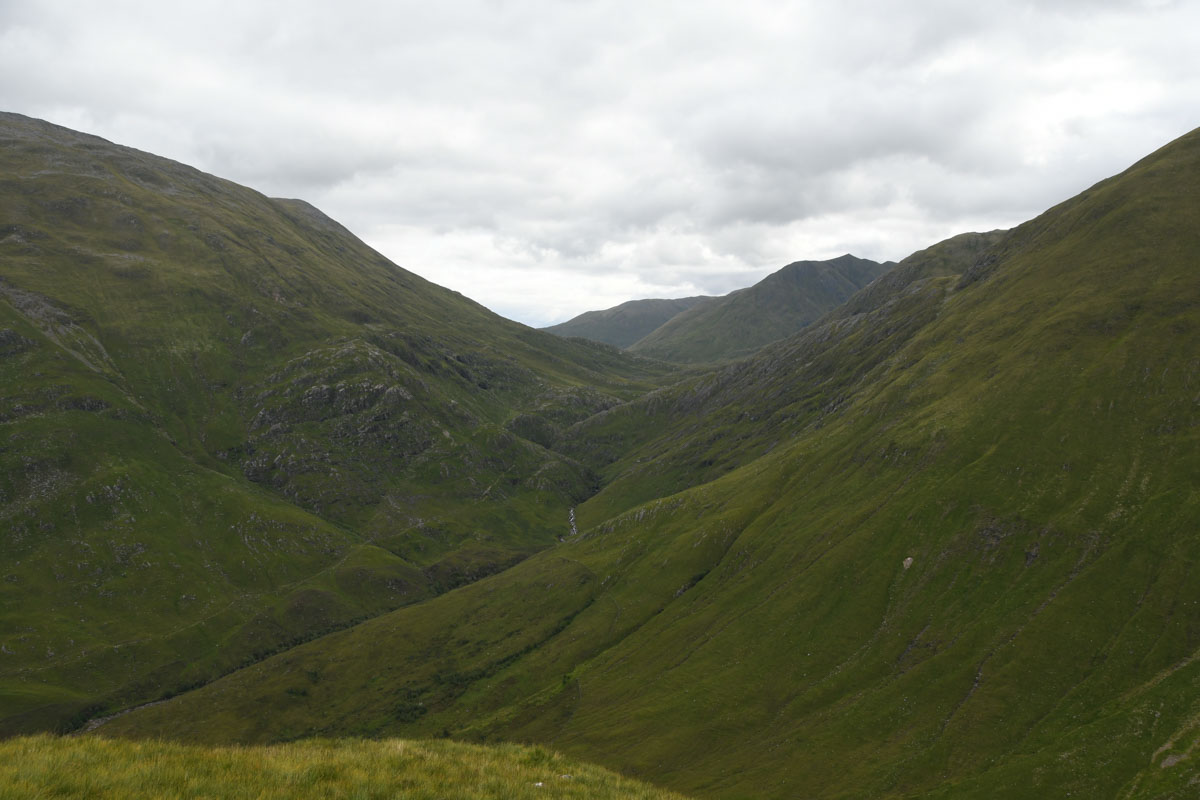 Once up a little higher the views on to the north side of the Sisters ridge open up a little. 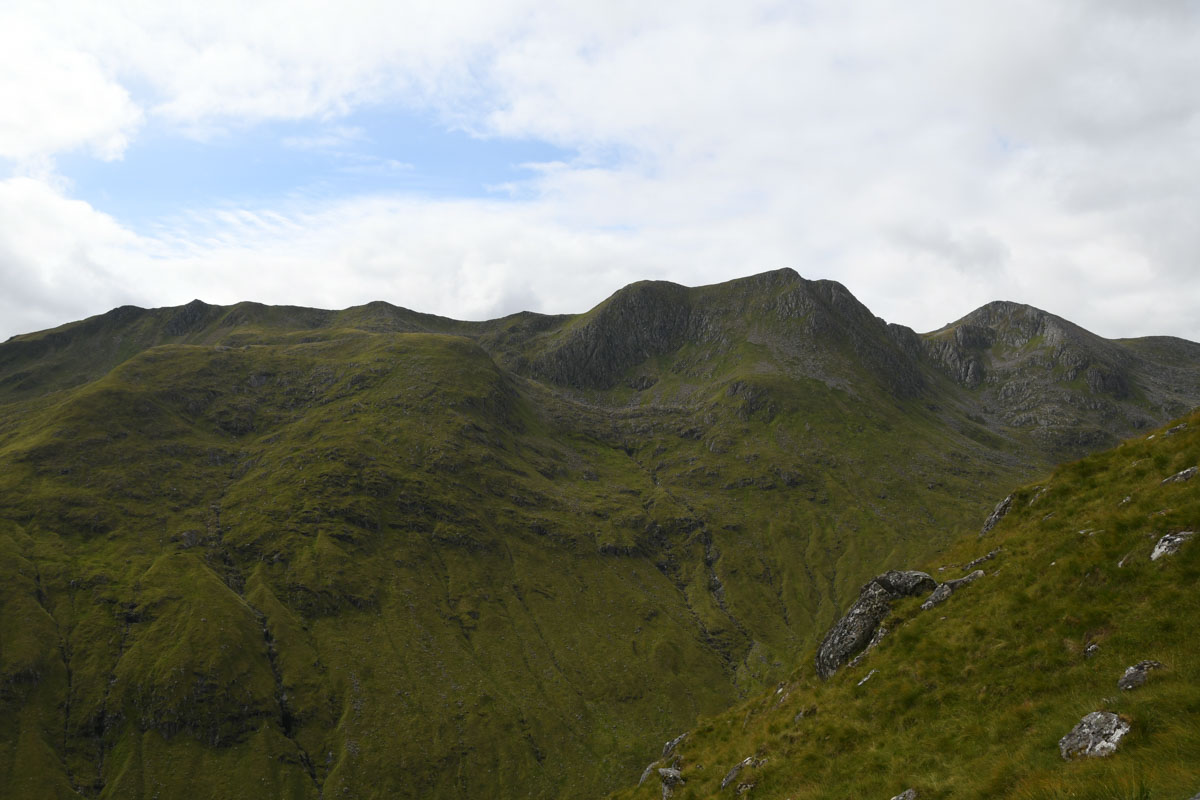 The east ridge of Fhuaran continued to mock our 4 weeks of sloth with continued steepness. Once above 600m there are a few breaks in the gradient.

Looking down the east ridge: 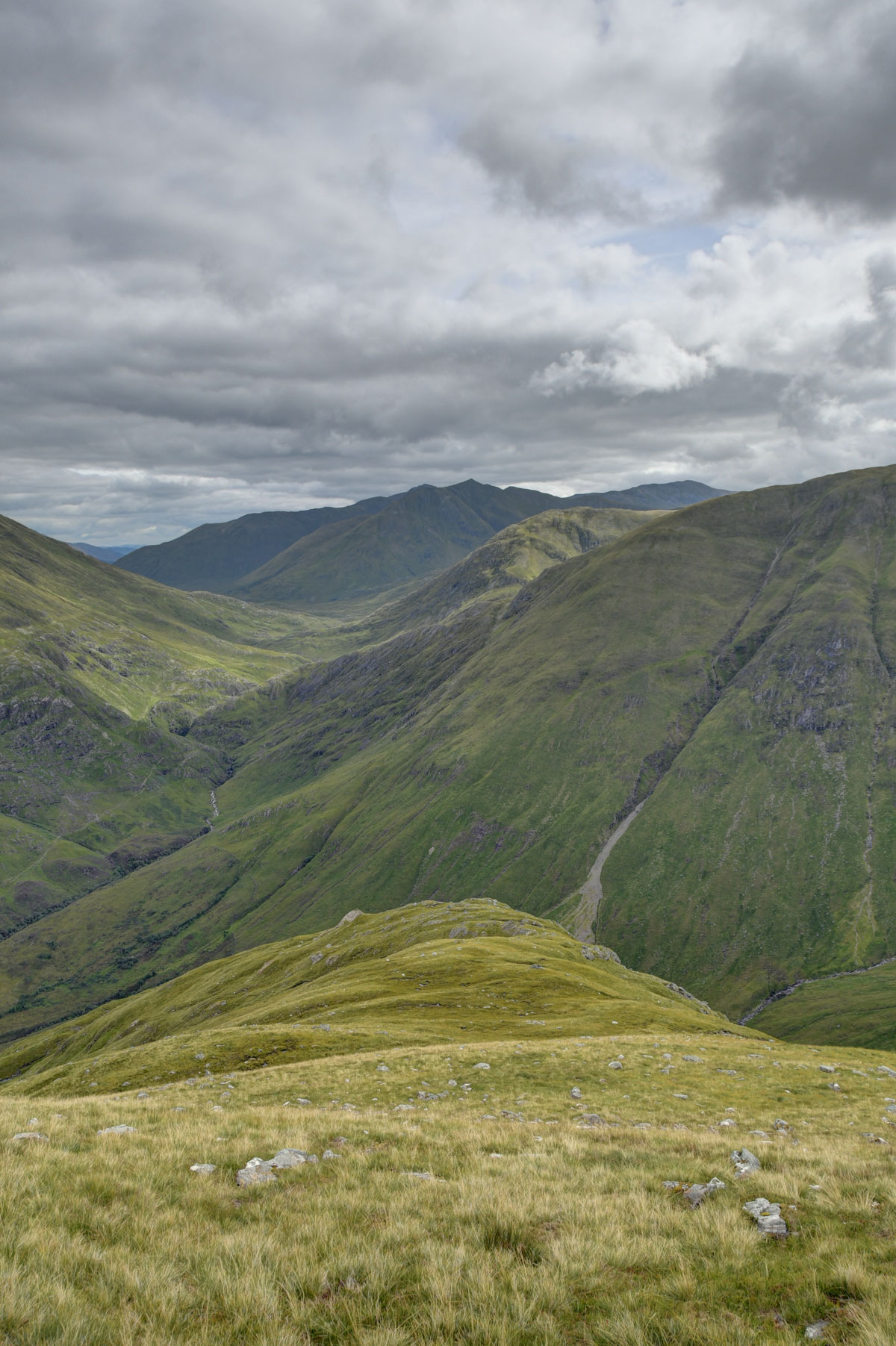 Once up to 850m there is a longer, flatter portion approaching the munro.

H on the east ridge: 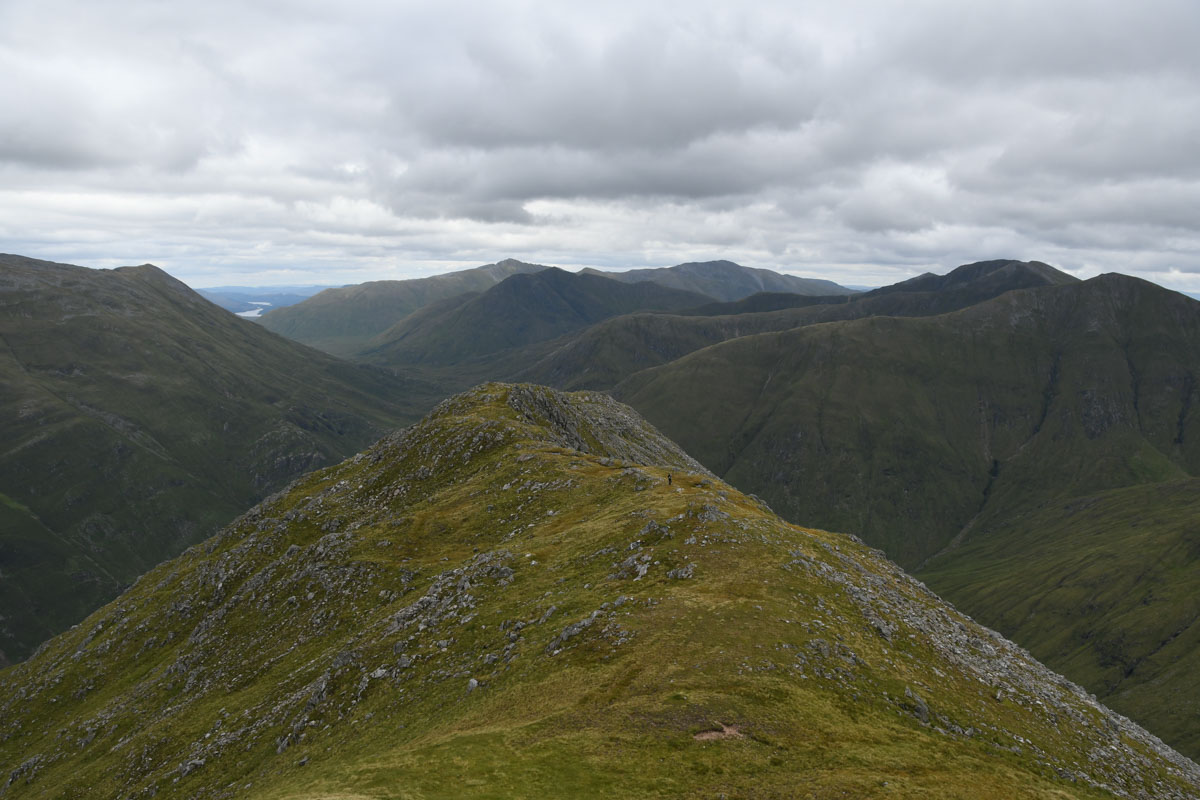 Had some lunch at the 910m point of the ridge, a grey day with good air clarity. Torridon/Fisherfield were easy to identify, Harris was just visible out to the NW.

Had a 30 minute break and then carried on up the last of the ridge. 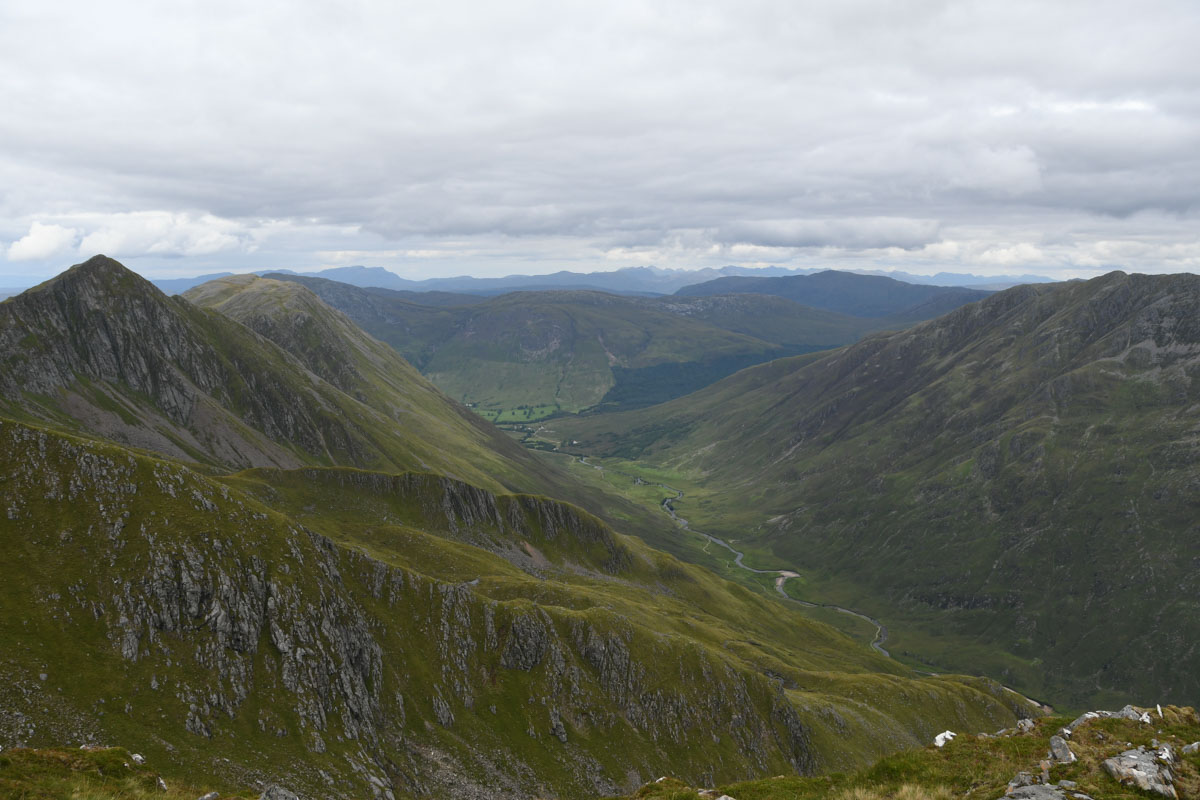 Continuing along the ridge Sgurr Fhuaran and the cliffs to its NW are more clearly seen. 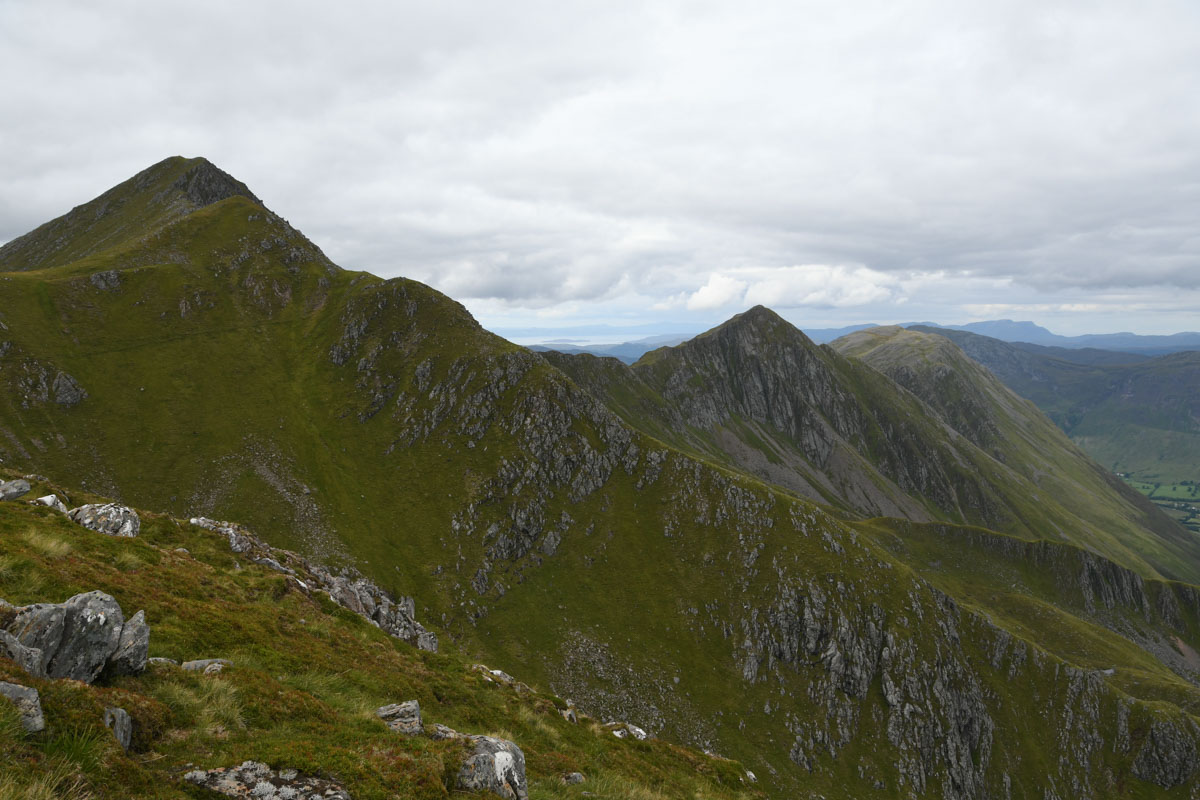 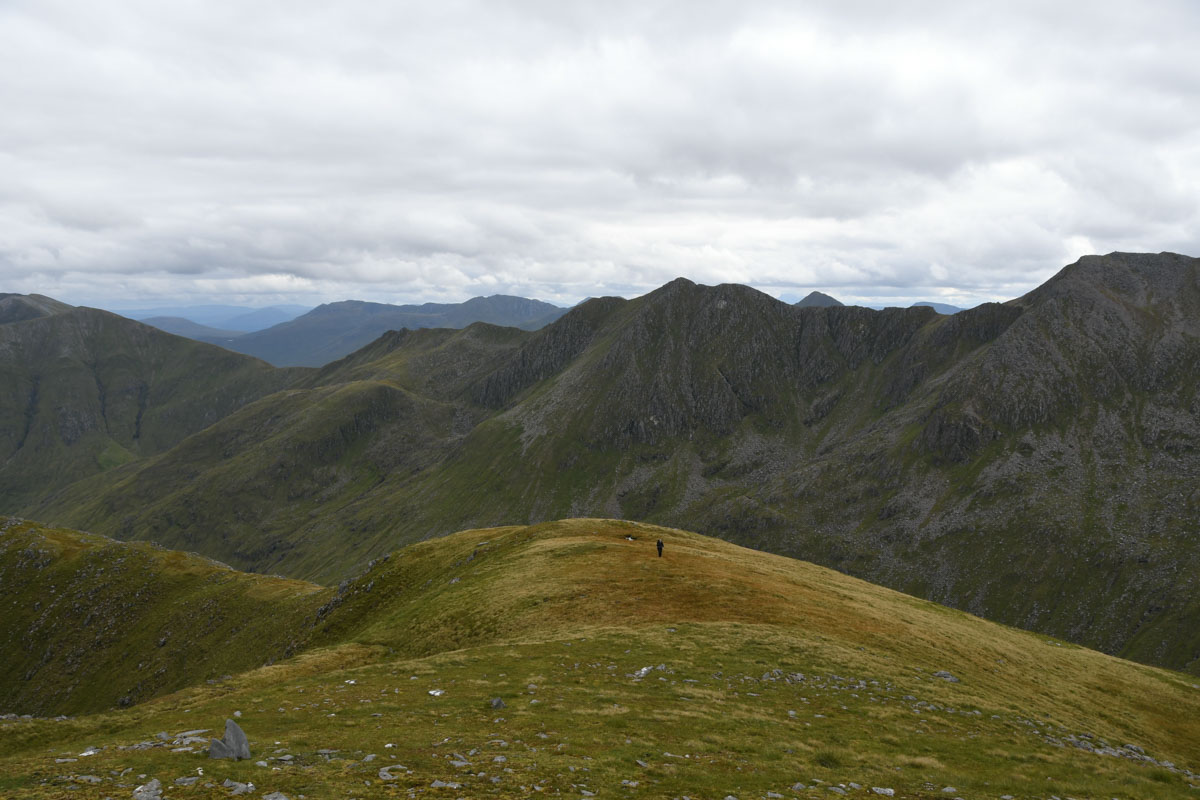 Sgurr na Carnach and The Saddle: 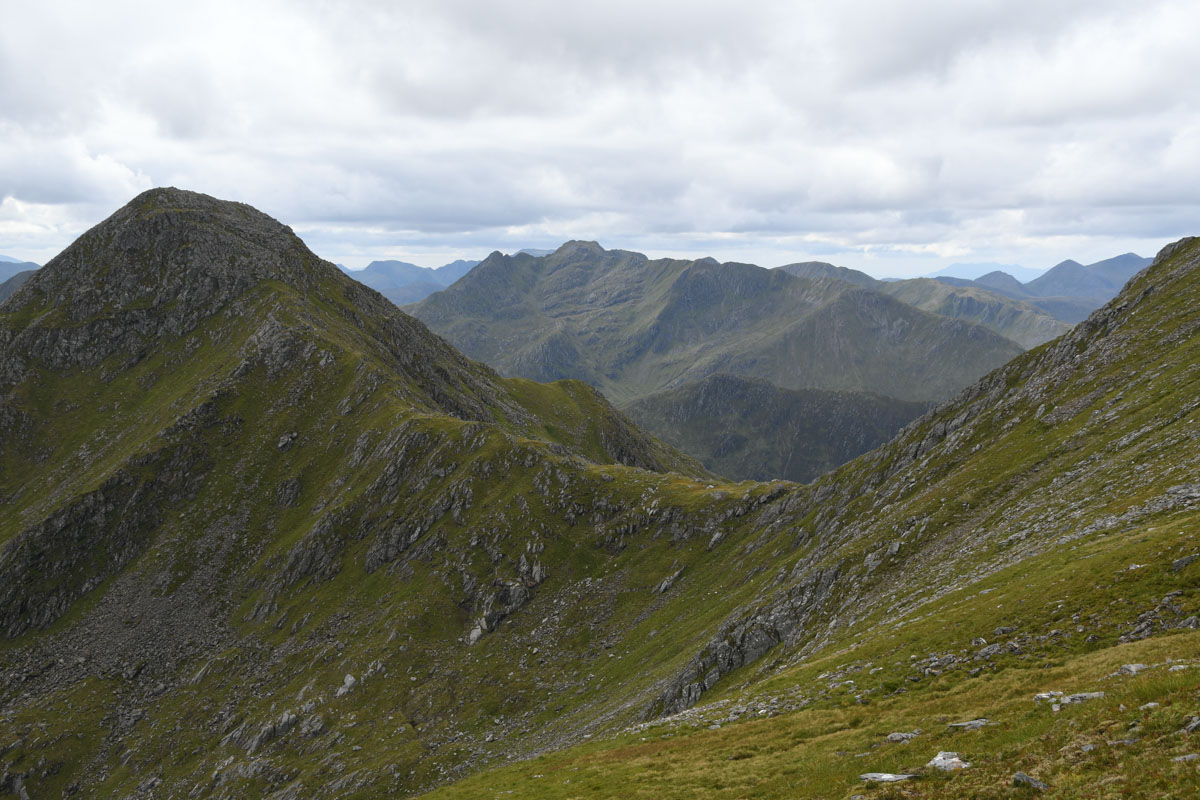 West along the ridge: 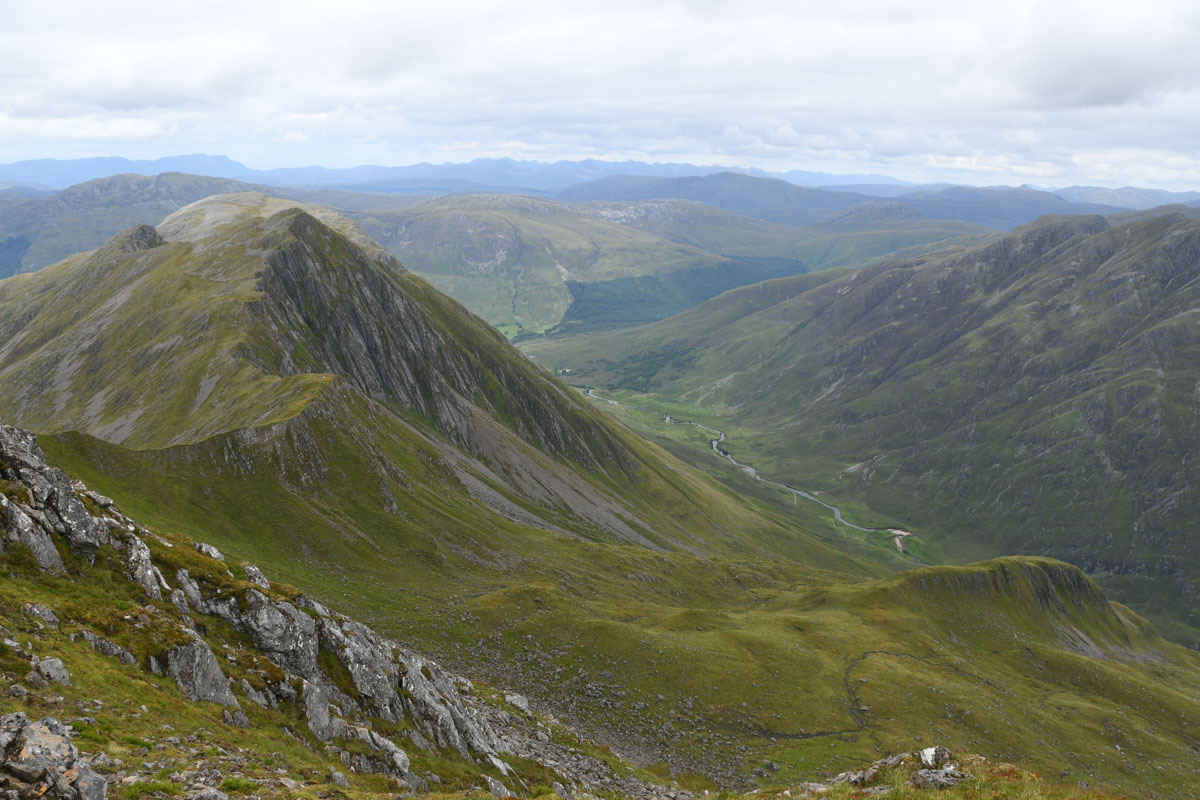 Up at the summit we had a short pause, not the best day we’ve seen, but not bad. We could see out to Barra (just) and south to Bidean nam Bian. The local views had the most appeal.

The east ridge of Sgurr Fhuaran: 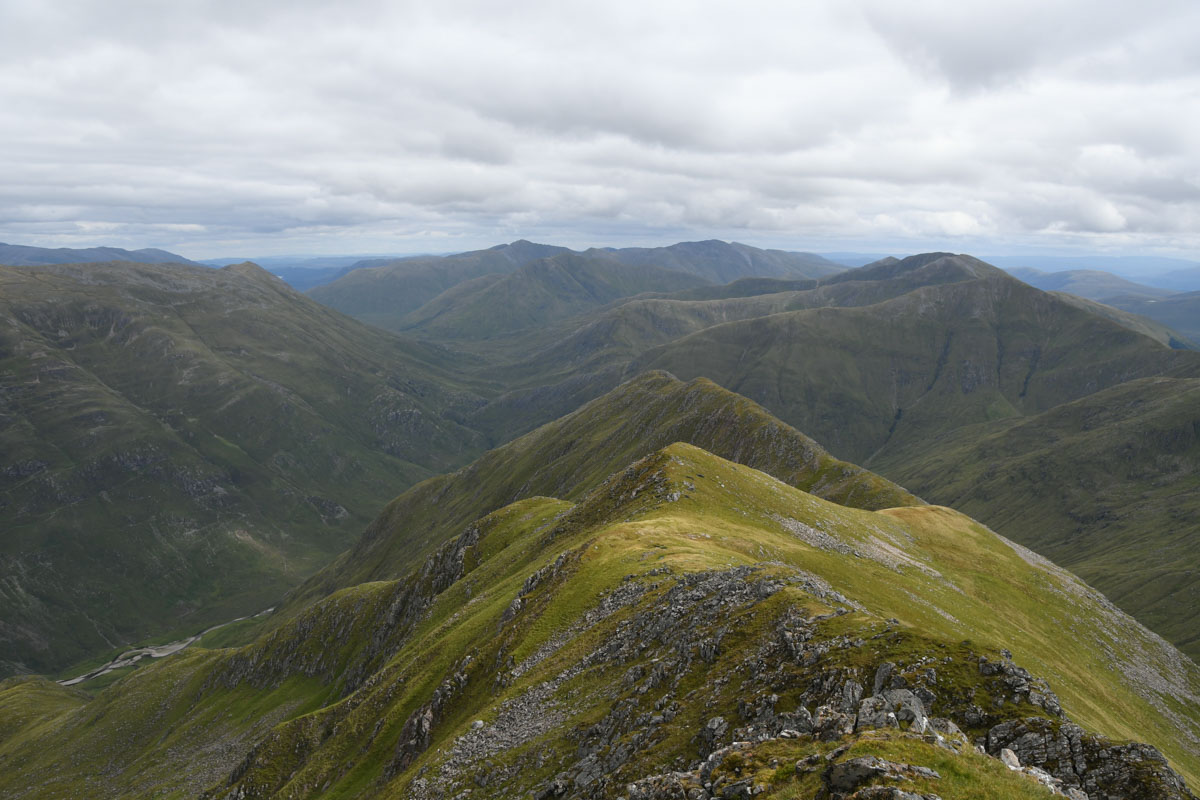 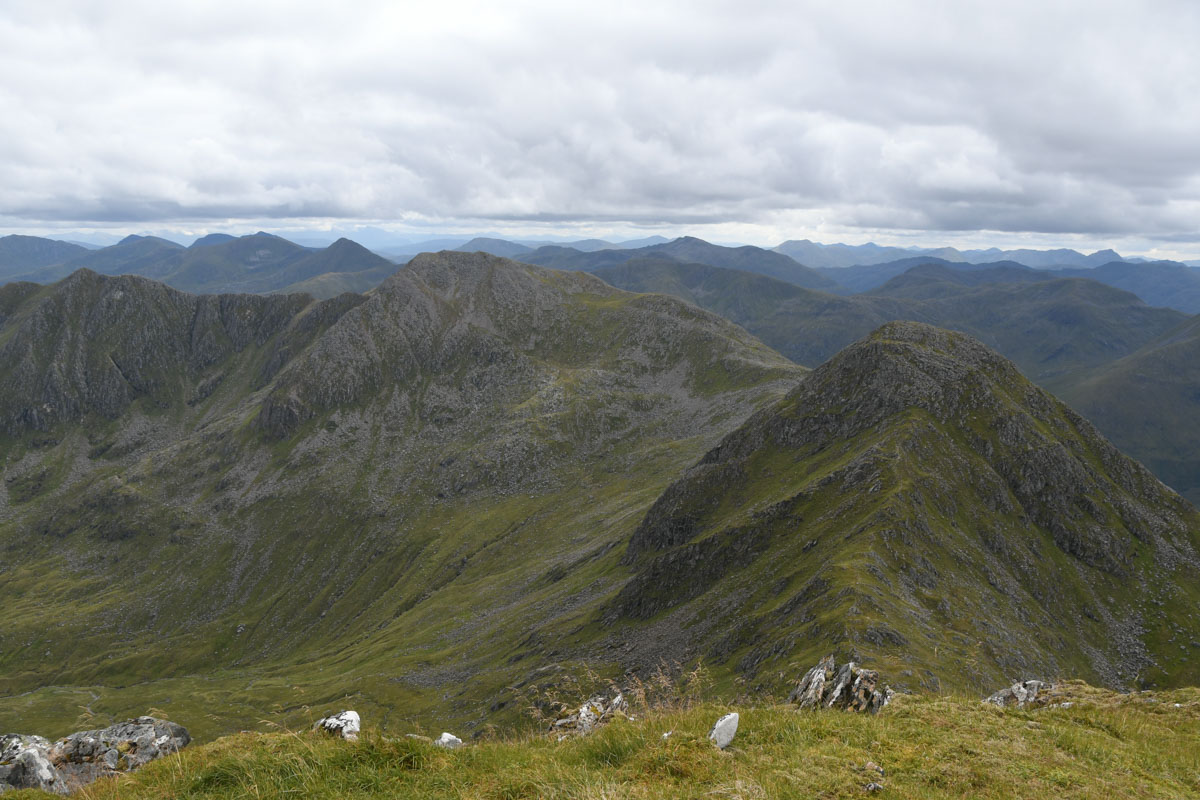 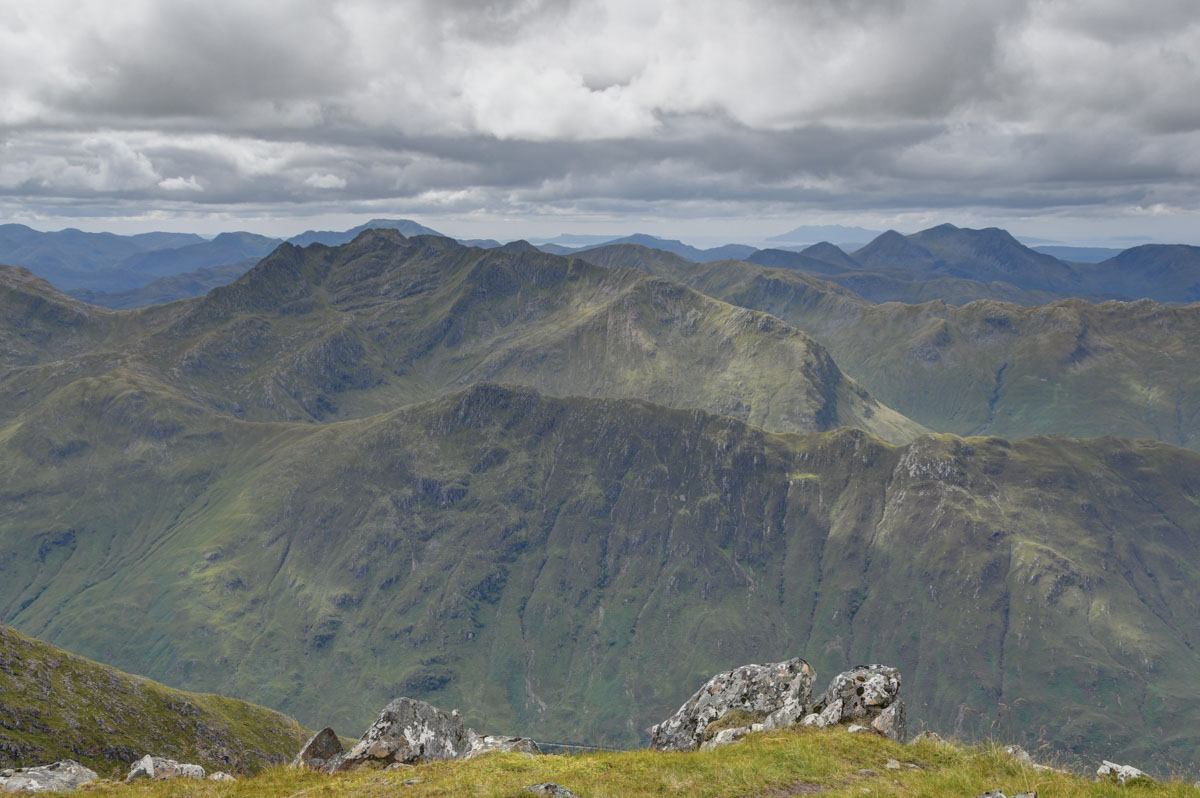 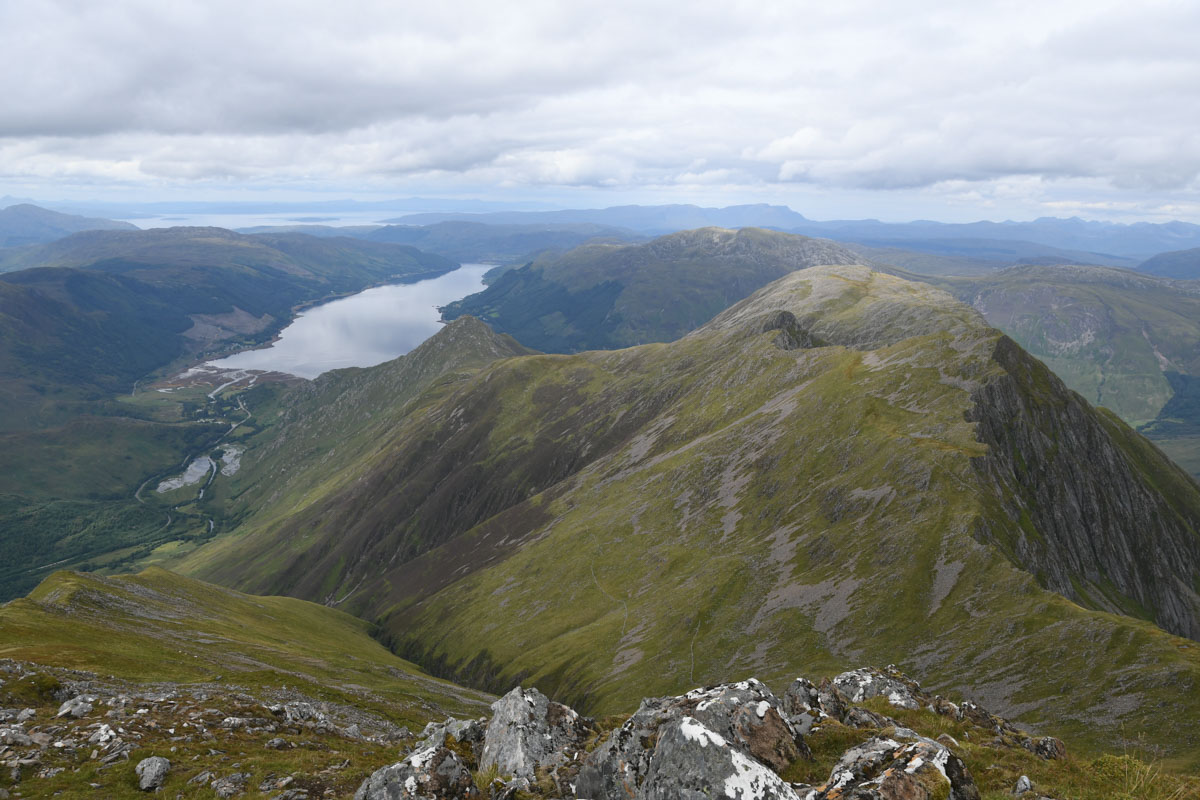 Carried on back towards Morvich – back on the Red route it was back to eroded paths. Dropping onto the bealach with Sgurr nan Saighead we considered dropping north to our previous ascent, but decided to continue along the ridge. 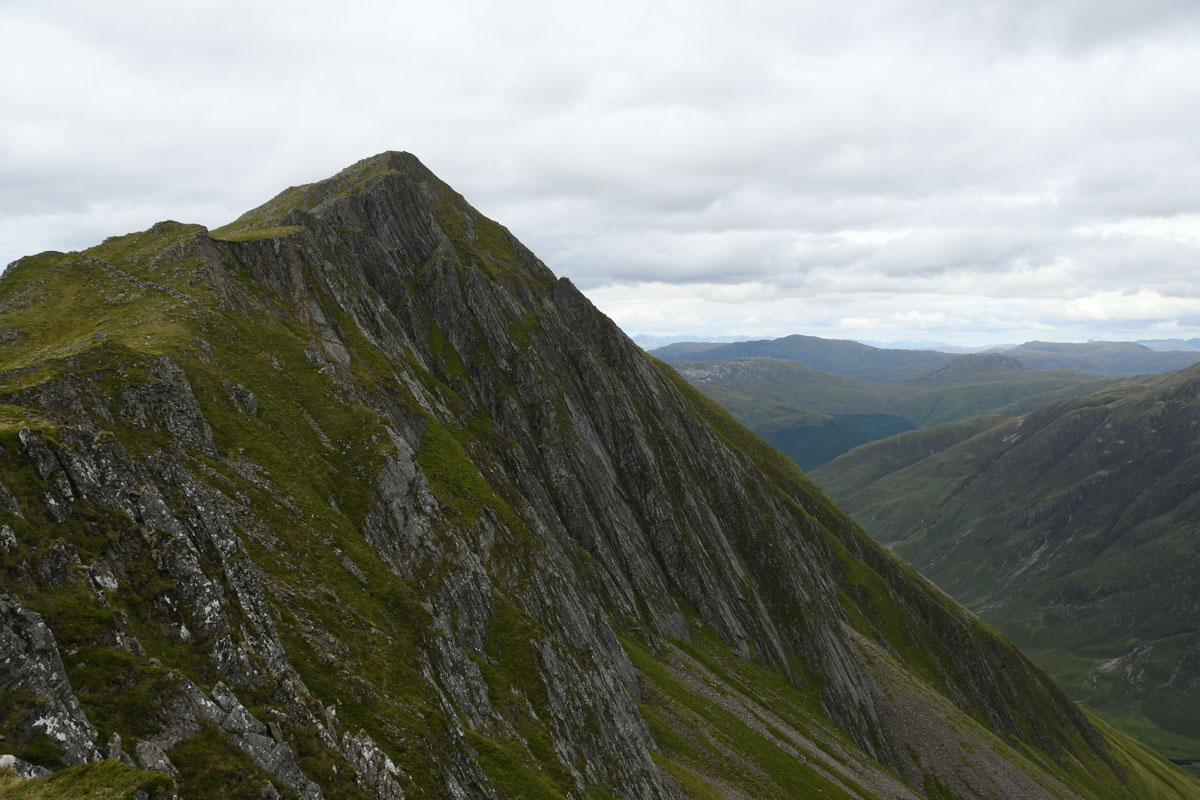 The continuation along to Beinn Bhuidhe is quite dramatic. 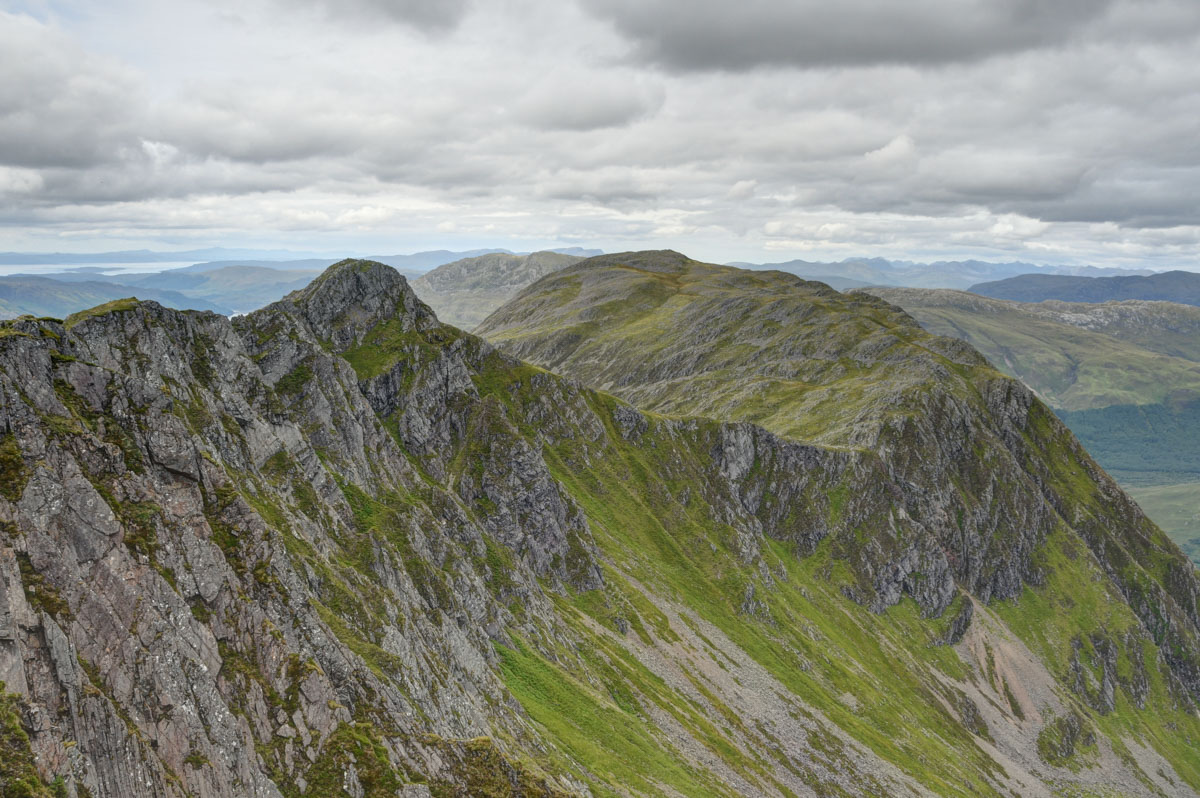 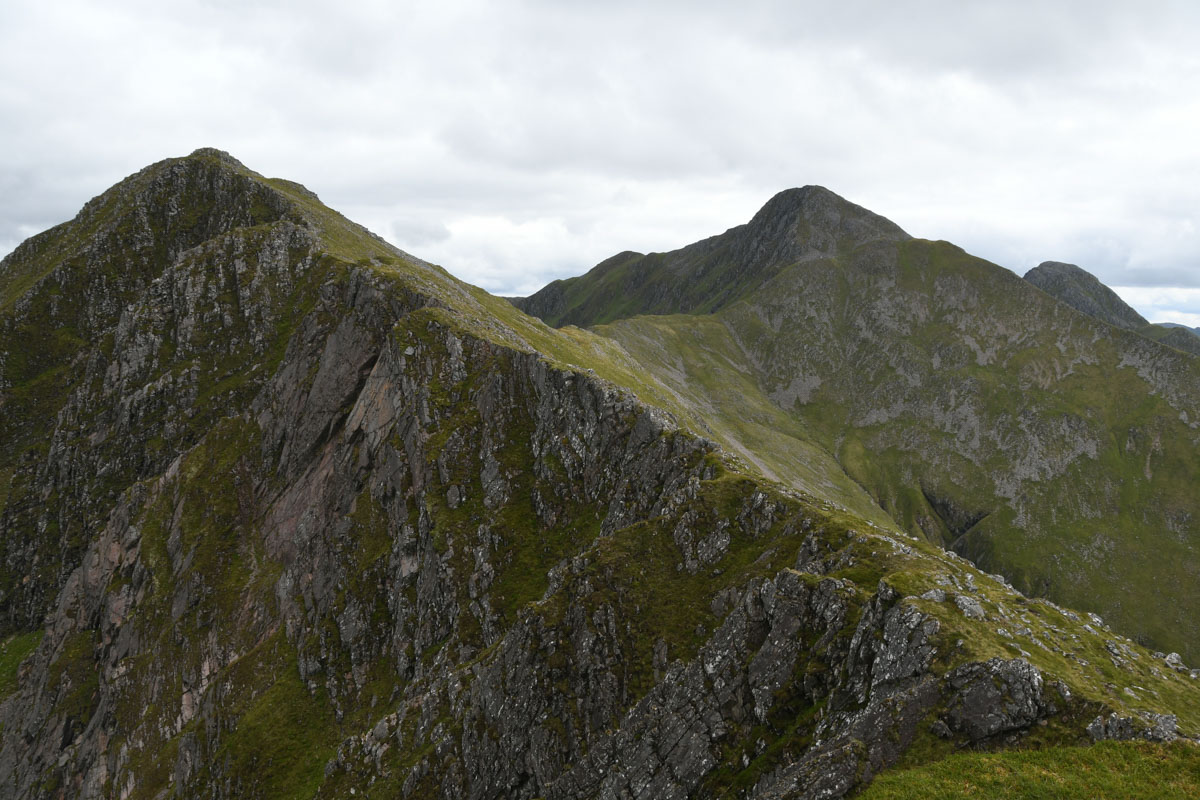 Across the glen the nice ridge of A’Mhuing and Biod an Fhithich heading up to the Forcan catches the eye – worth revisiting sometime. 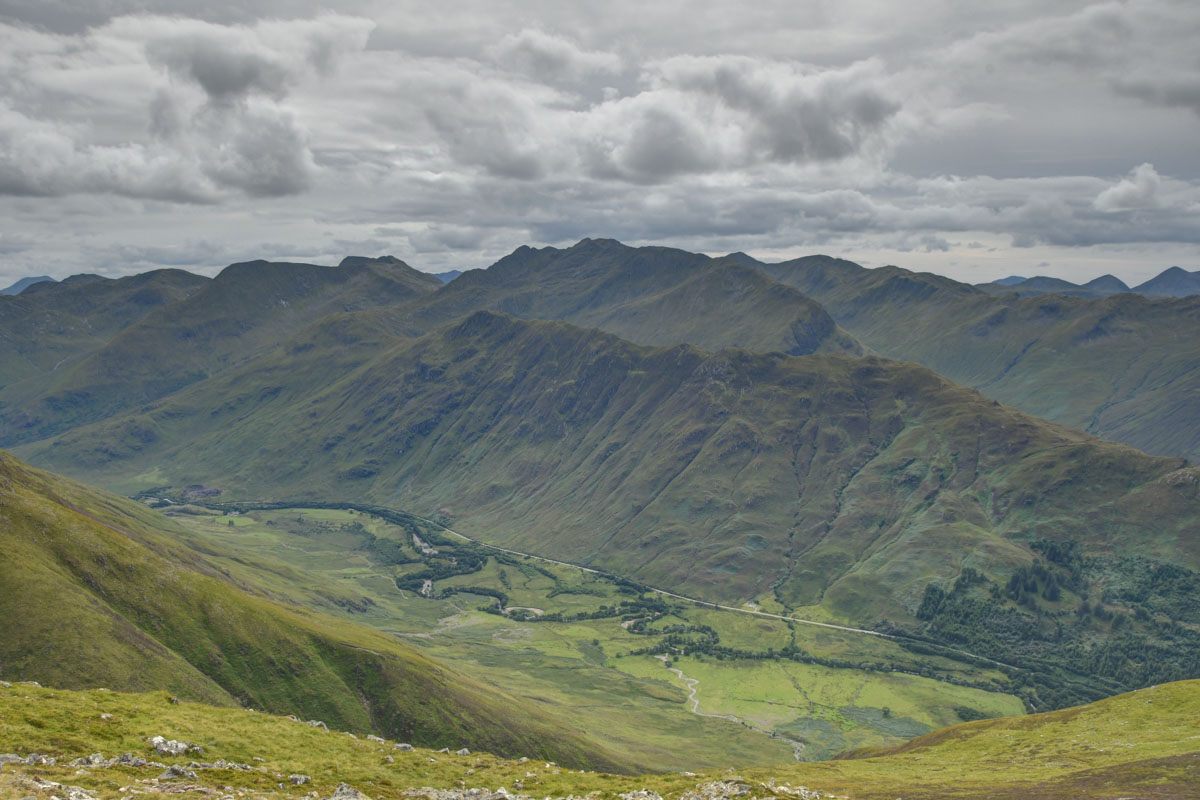 We had thought to carry on to the rarely visited Fifth (or First) Sister – Sgurr na Moraich – but instead decided to head down from Beinn Bhuidhe towards Sgurr an t-Searraich. 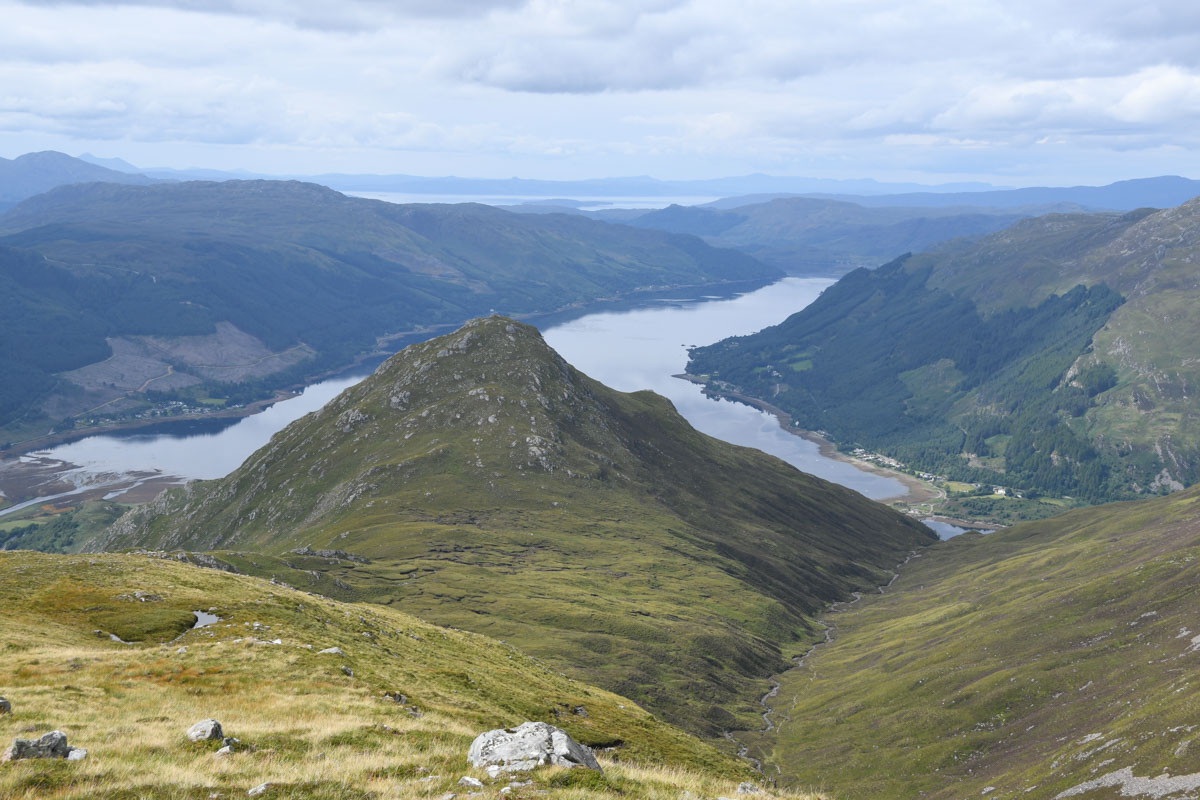 Relatively easy descent down to the bealach with Sgurr an t-Searraich and then on to the path at Allt a Chruin – this seems to have been repaired a bit since our last visit.

Nice to visit another route on the “to do” list. Plenty more where that came from.

2 thoughts on “The East ridge of Sgurr Fhuaran from Glen Lichd. 11th August 2018”