With a week’s holiday in Torridon we’d been out and about in mixed weather for the first half of the week. The forecast for end of the week was better.

One of the routes on the “to do” list was a revisit of the loop round Beinn na h-Eaglaise and Beinn Damh. We’d done this via Loch an Eoin in 2008, for a return we planned the circuit of Coire Roill.

Kicked off from the Torridon Inn car park, there’s a path from the rear of the Inn up Coire Roill.

Within a kilometre there’s a rather nice waterfall view. 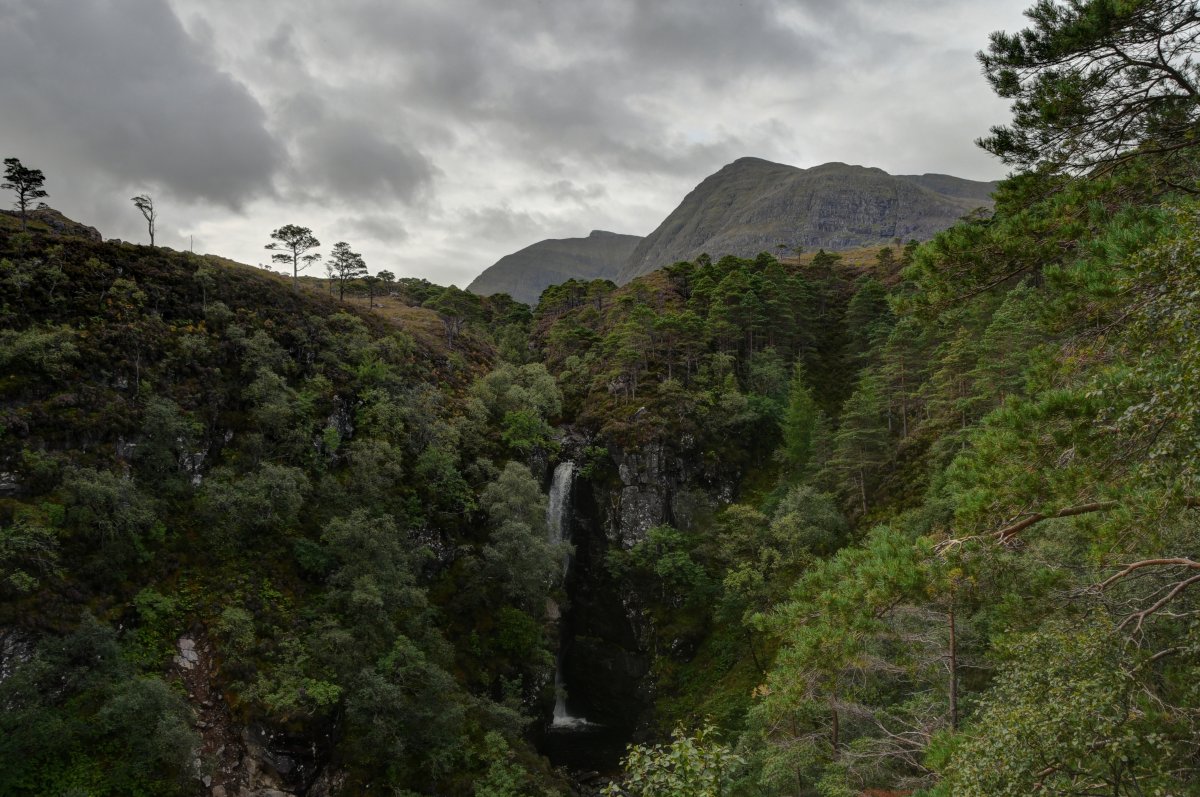 A bit of a grey day, but fabulous surroundings. 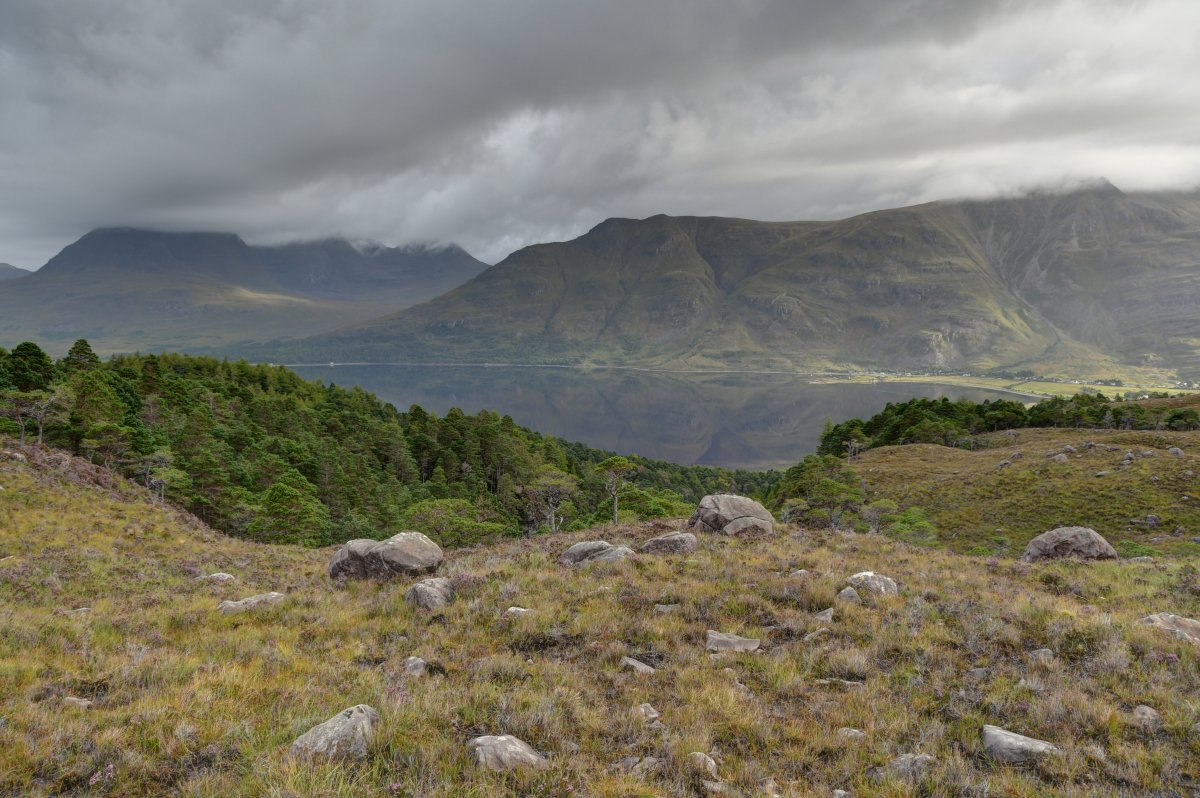 The sun came out for a while as we forded the Allt Coire Roill, following the path for a further 400m before striking up the west ridge of Beinn na h-Eaglaise. Sgurr na Bana Mhoraire was lit across the coire. 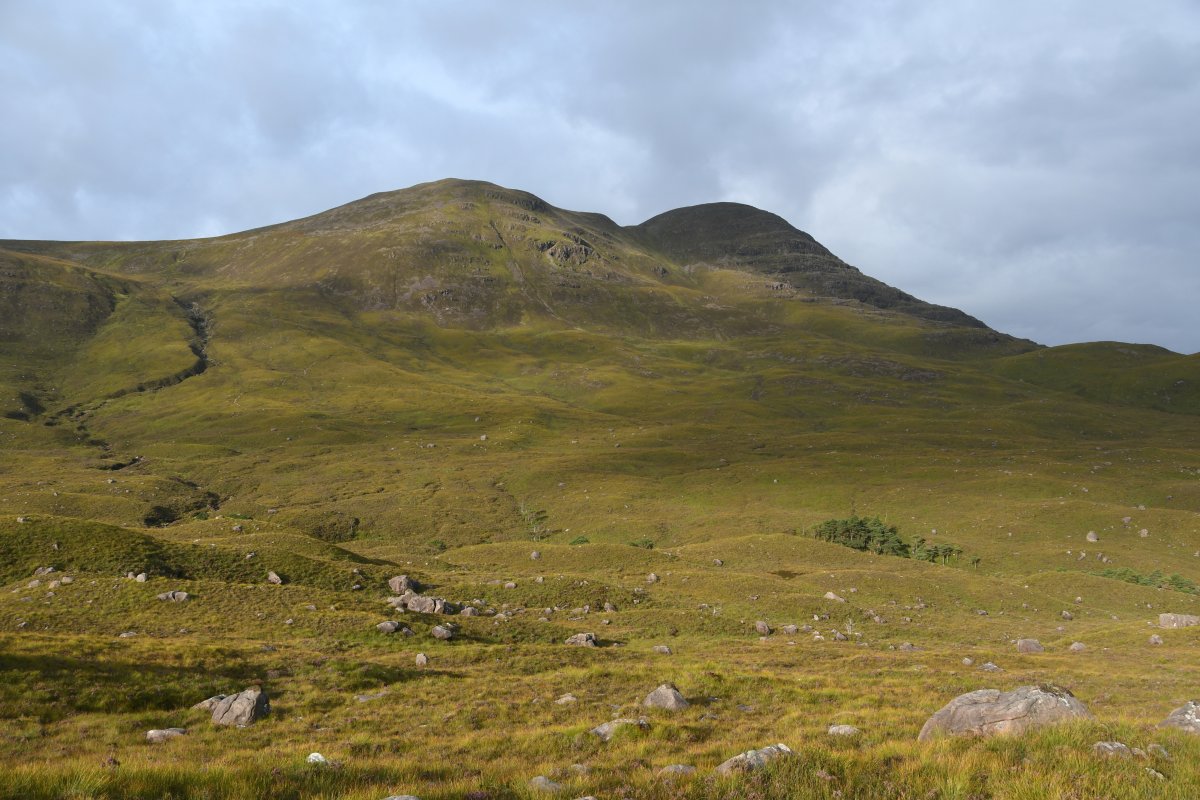 The sun didn’t last long and the ascent of Beinn na h-Eaglaise was atmospheric instead. It’s a nice ascent route. 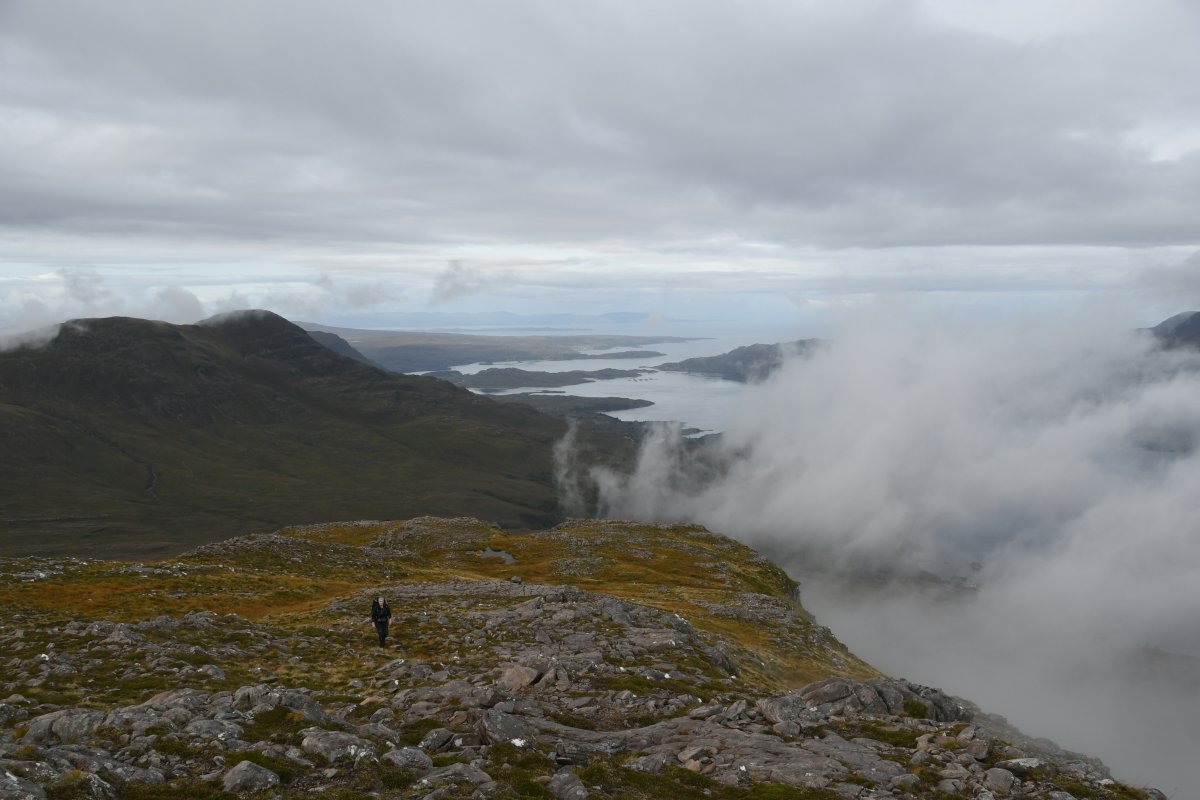 Beinn Damh is no less impressive than the Torridon munros. 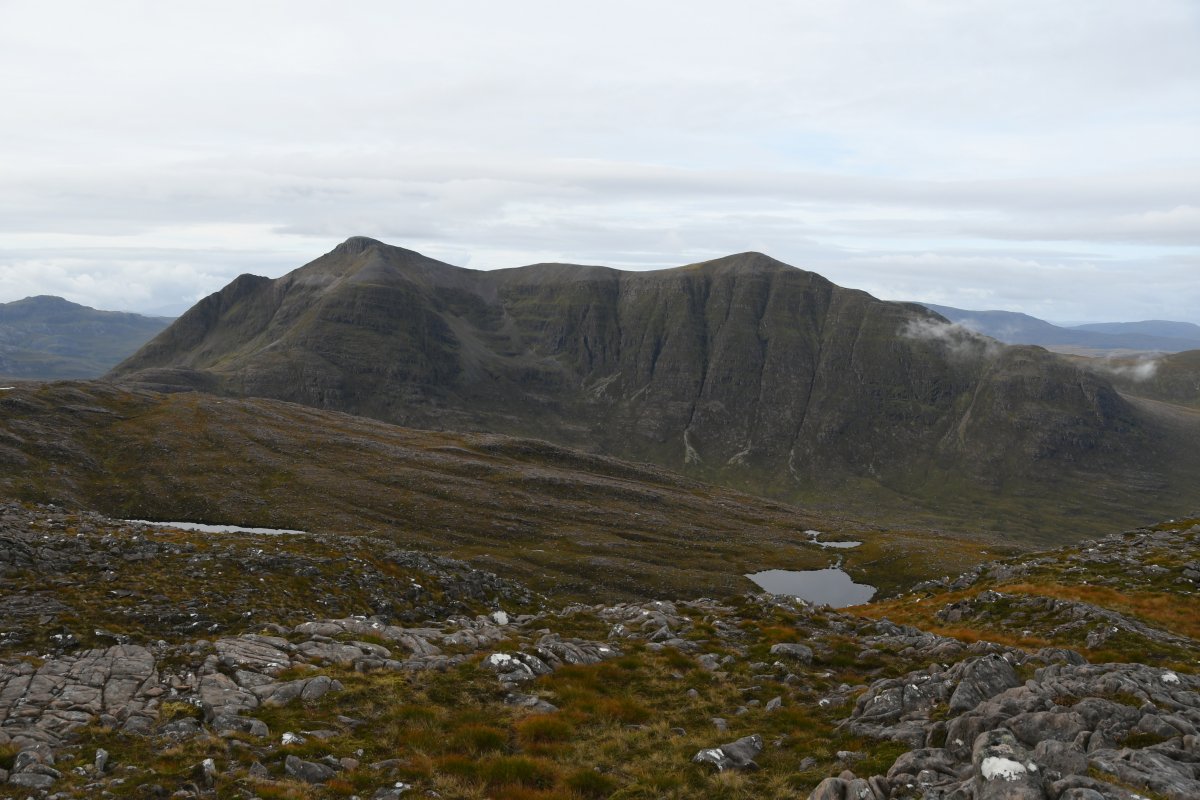 It didn’t take too long to get to the Graham’s summit – briefly spotted a Golden Eagle sitting atop the rocks near the summit – it was off before a picture could be taken.

Wandered up to the summit and enjoyed the views with a bite to eat. The cloud was thinning a bit. Seana Mheallan, the Marilyn in the centre of Glen Torridon is a great viewpoint. 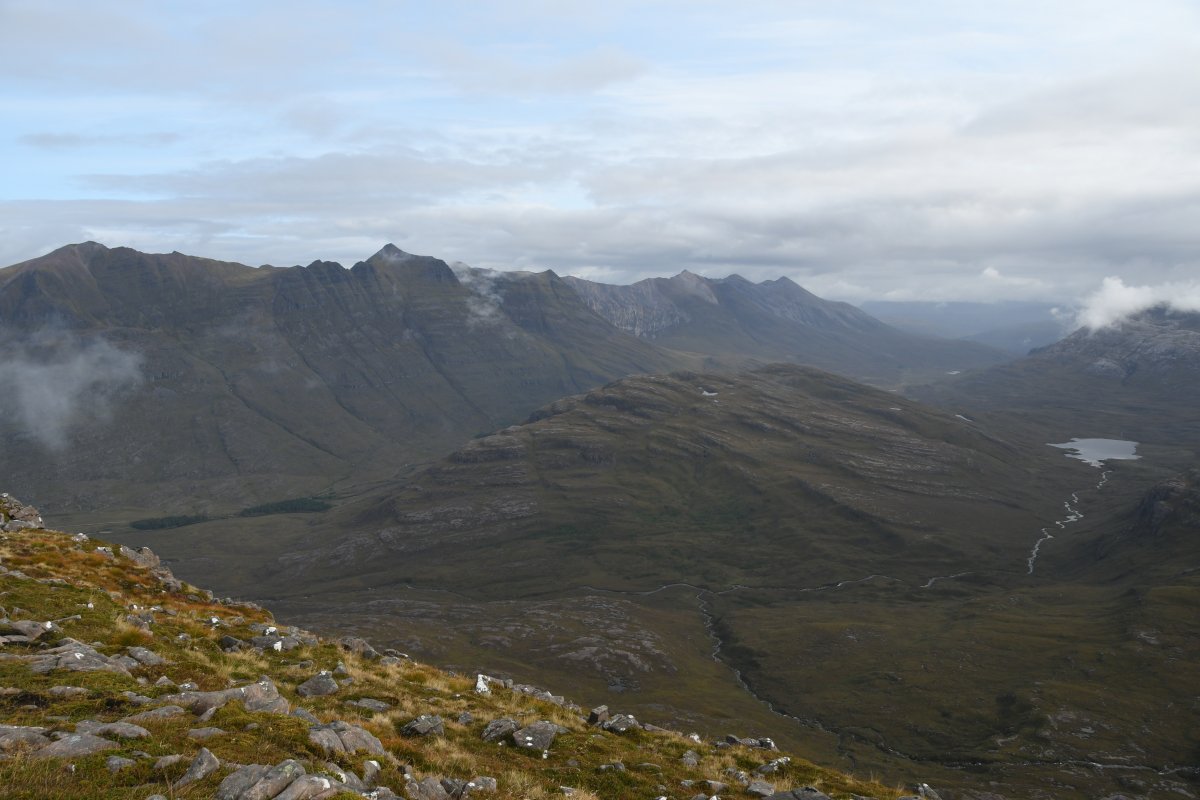 The views across Loch an Eoin to the Achnashellach hills is great. 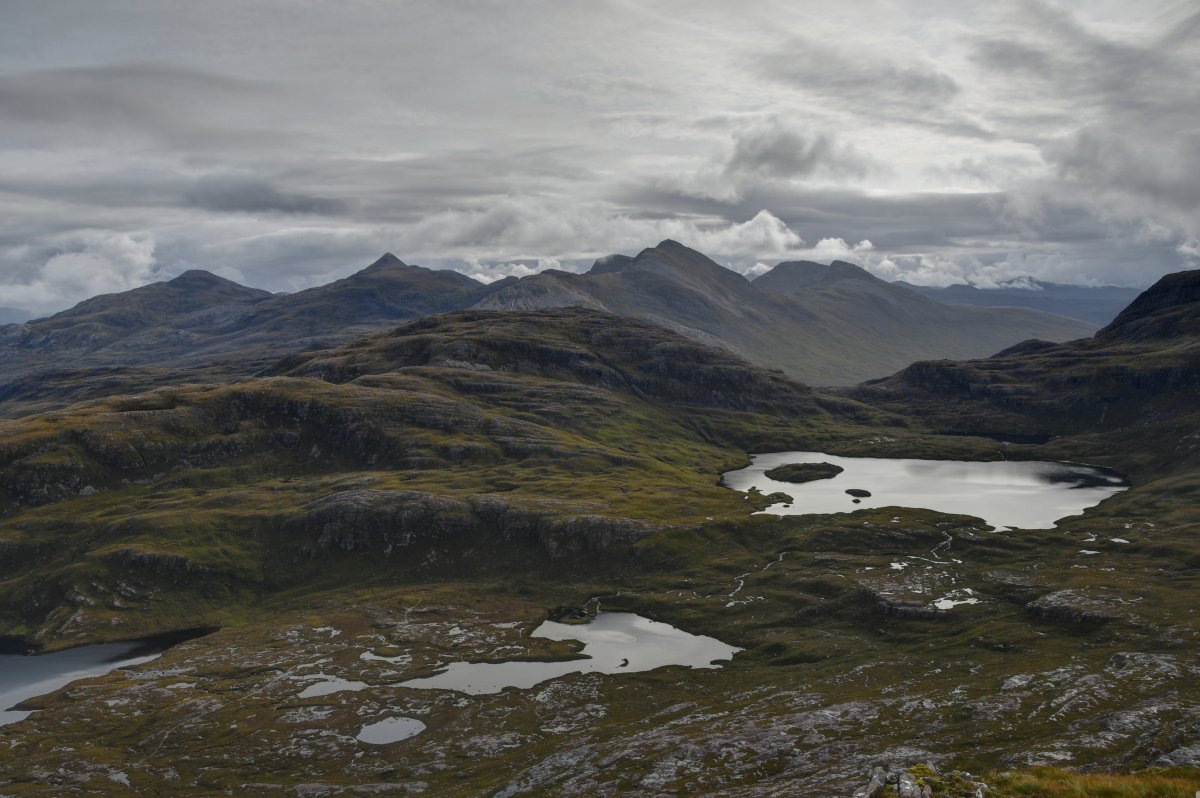 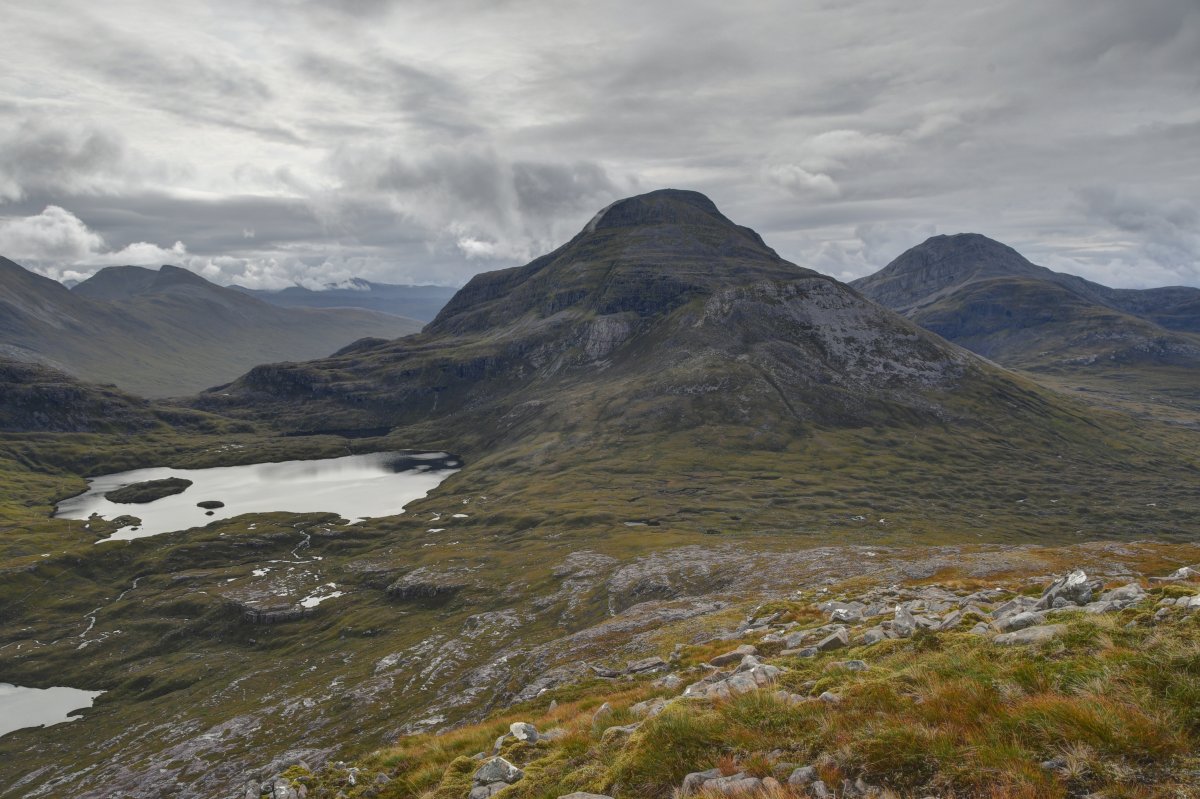 Set off from the summit a little way SSE then cutting back SW down to Lochan na h-Eaglaise – actually a little string of lochans. Some nice reflections here. 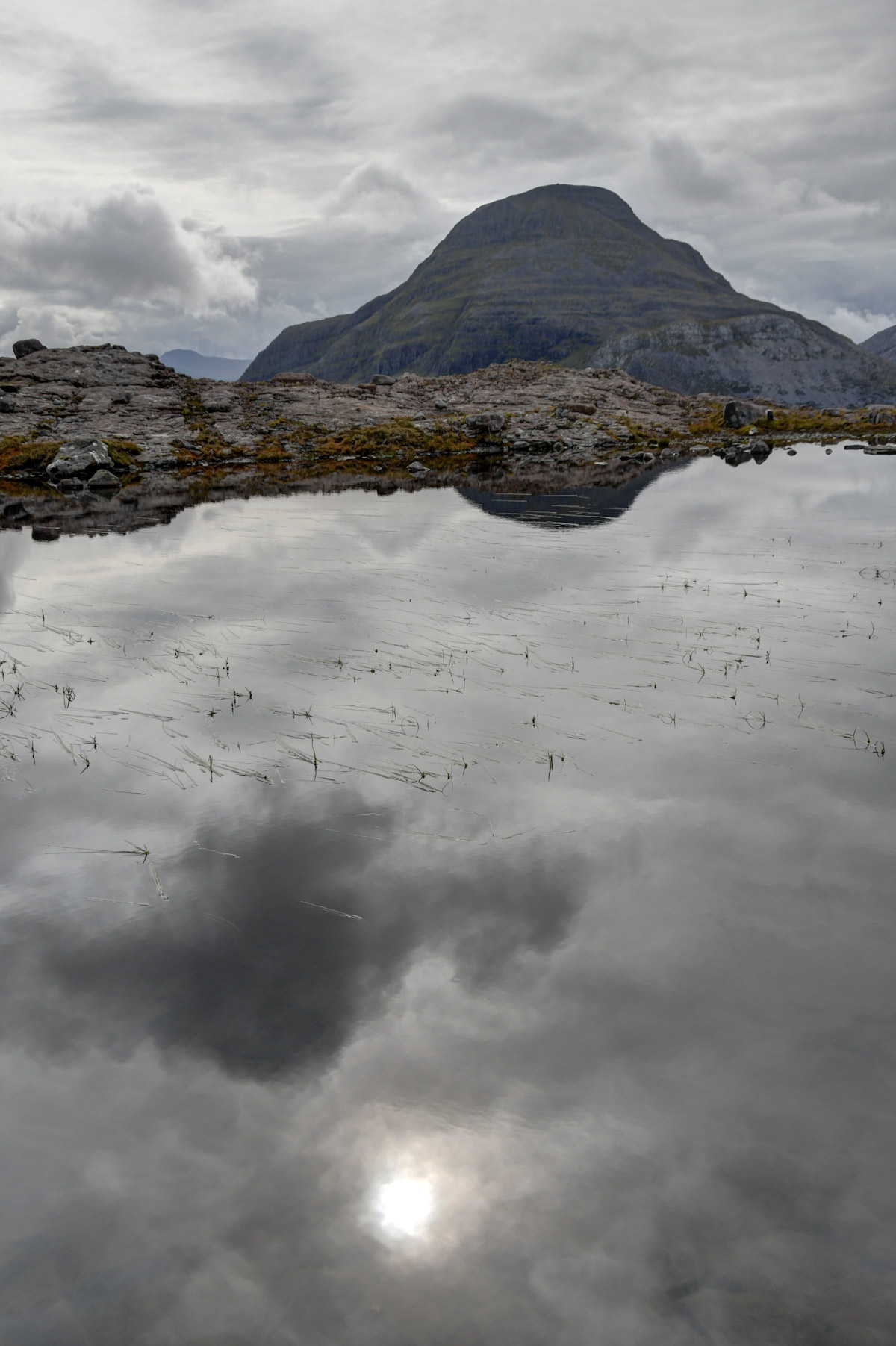 Went over the 676m point heading for Drochaid Coire Roill. A decent view SE from here. 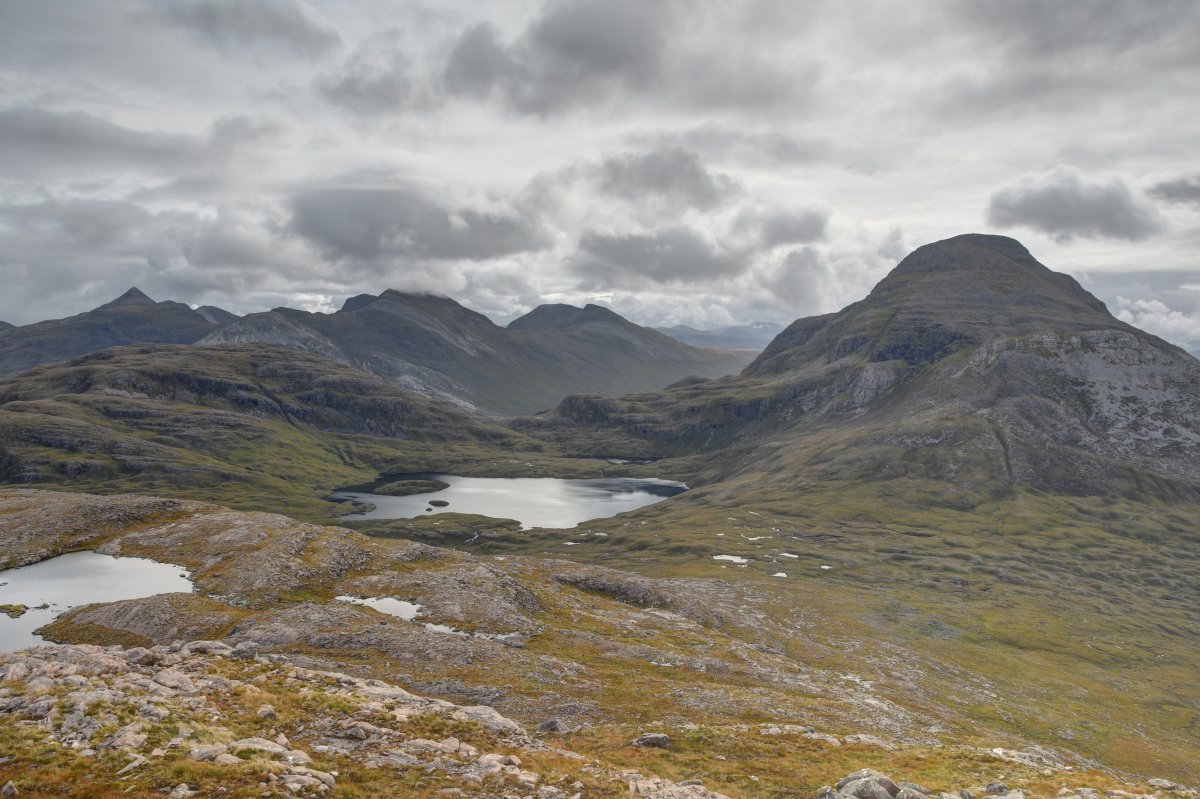 Beinn Damh, and in particular Spidean Coire an Laoigh now dominate the view. 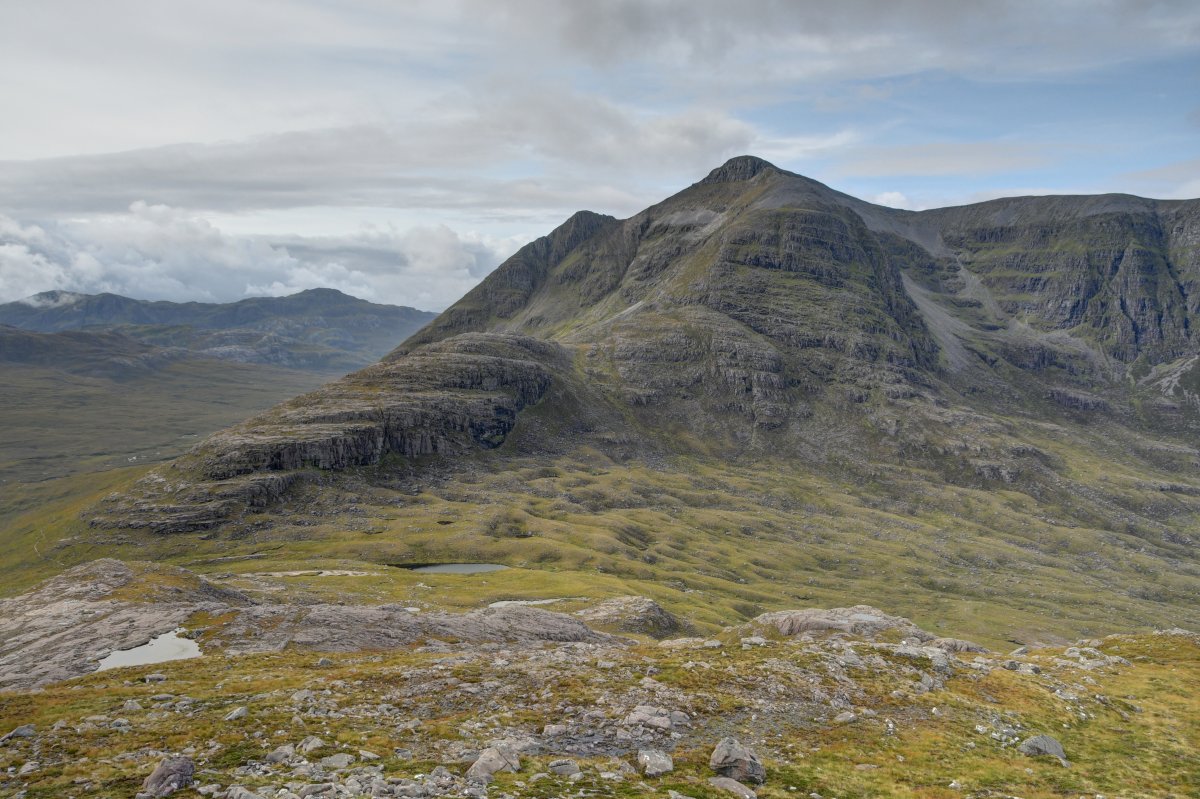 The descent is unpathed, but fairly standard pool strewn Torridonian fare – quite a decent walking terrain. 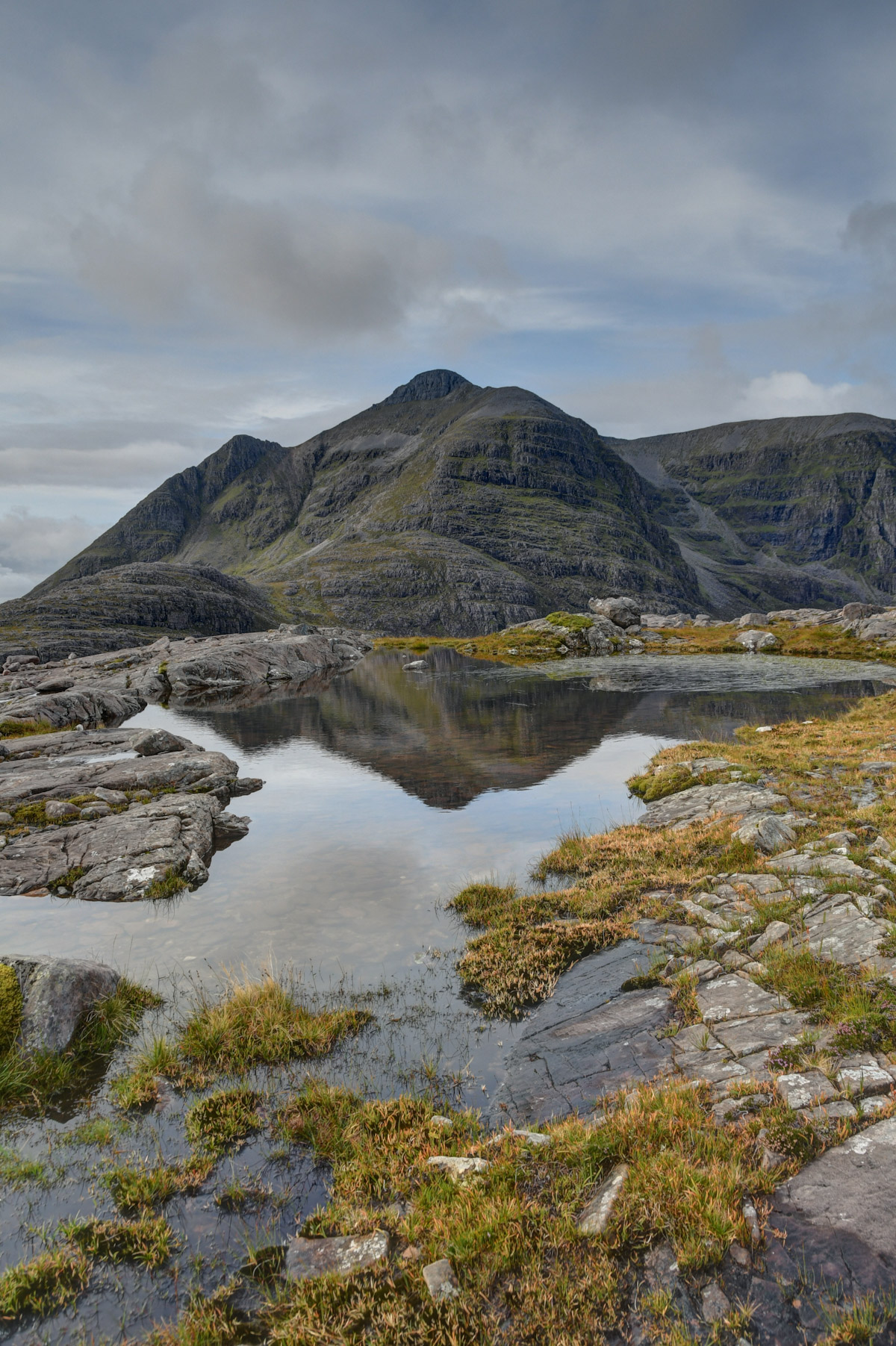 About 40m N of Drochaid Coire Roill there is a colossal sandstone table – a rather singular feature. Well worth a visit, or a game of bowls. 😉 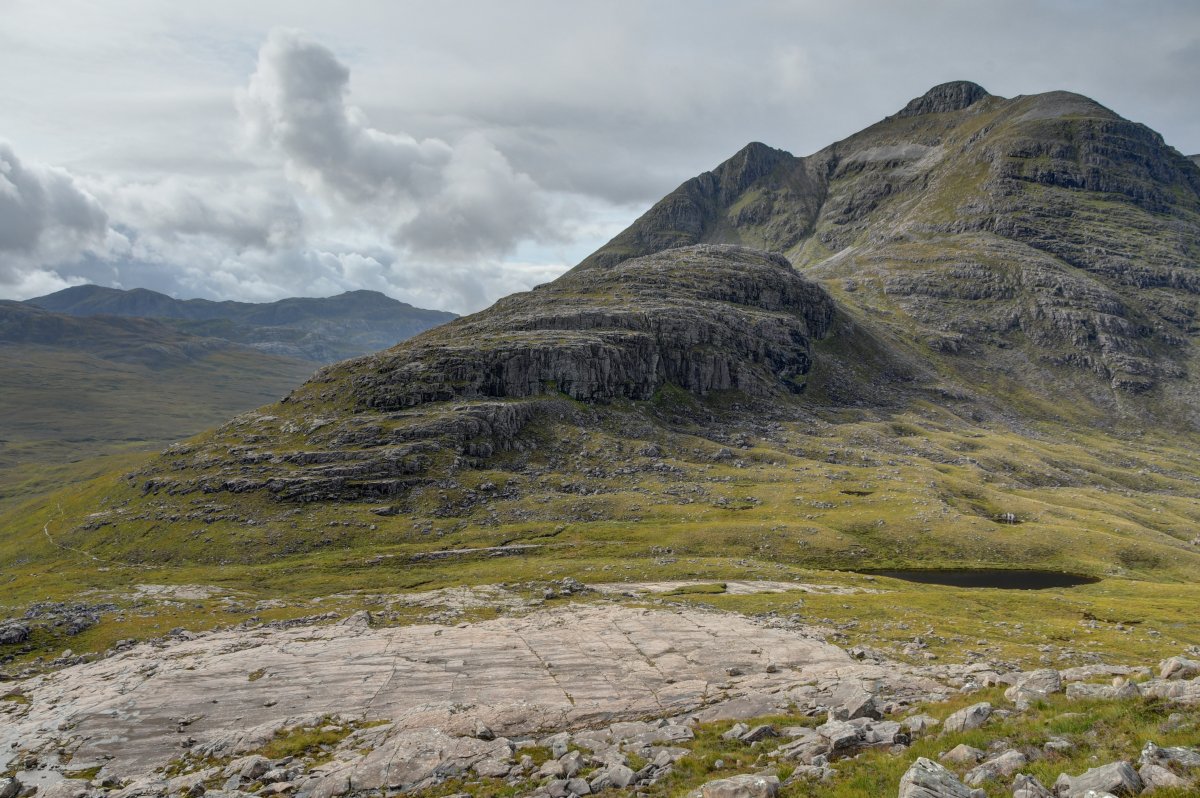 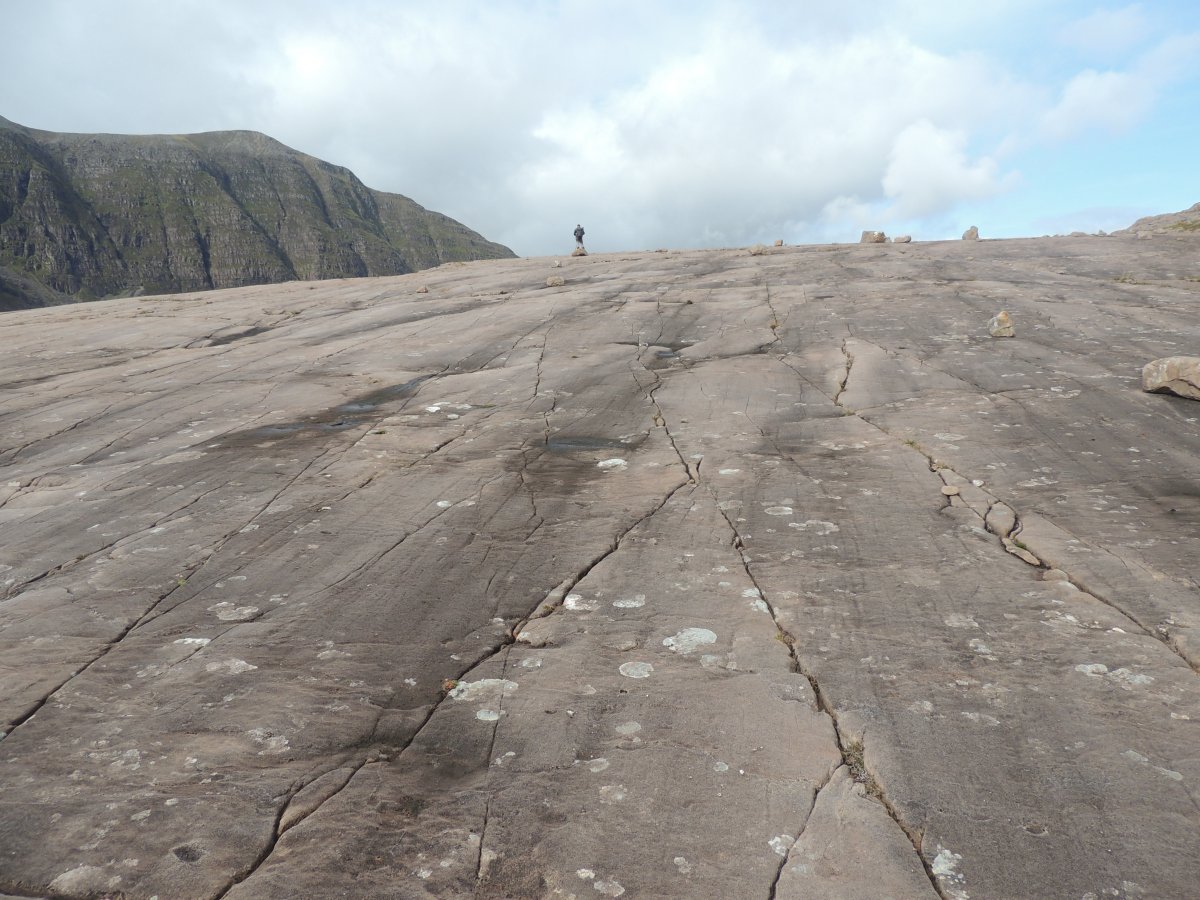 Crossing Drochaid Coire Roill there is then an easy weaving ascent through craggy bands up Meall Dubh na Drochaid.

From Meall Dubh na Drochaid there is then a very steep ascent up to Stuc Toll nam Biast. There is actually a faint path up this, easy to lose on the steep grass, but with a little cairn at the top end. As with last time I wouldn’t fancy descending this – too steep for my liking. An easy enough ascent, taken with care. 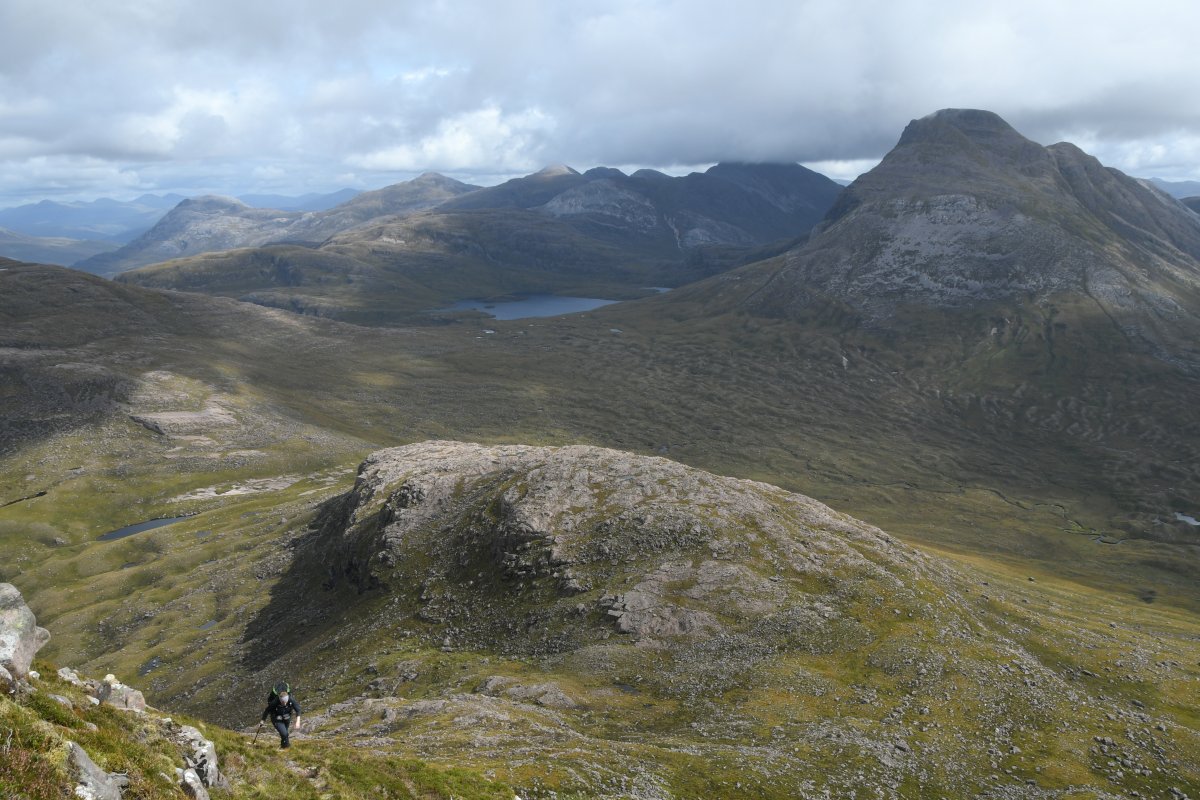 Then an irksome shower blew in from the west and clagged the final ascent of Spidean Coire an Laoigh. 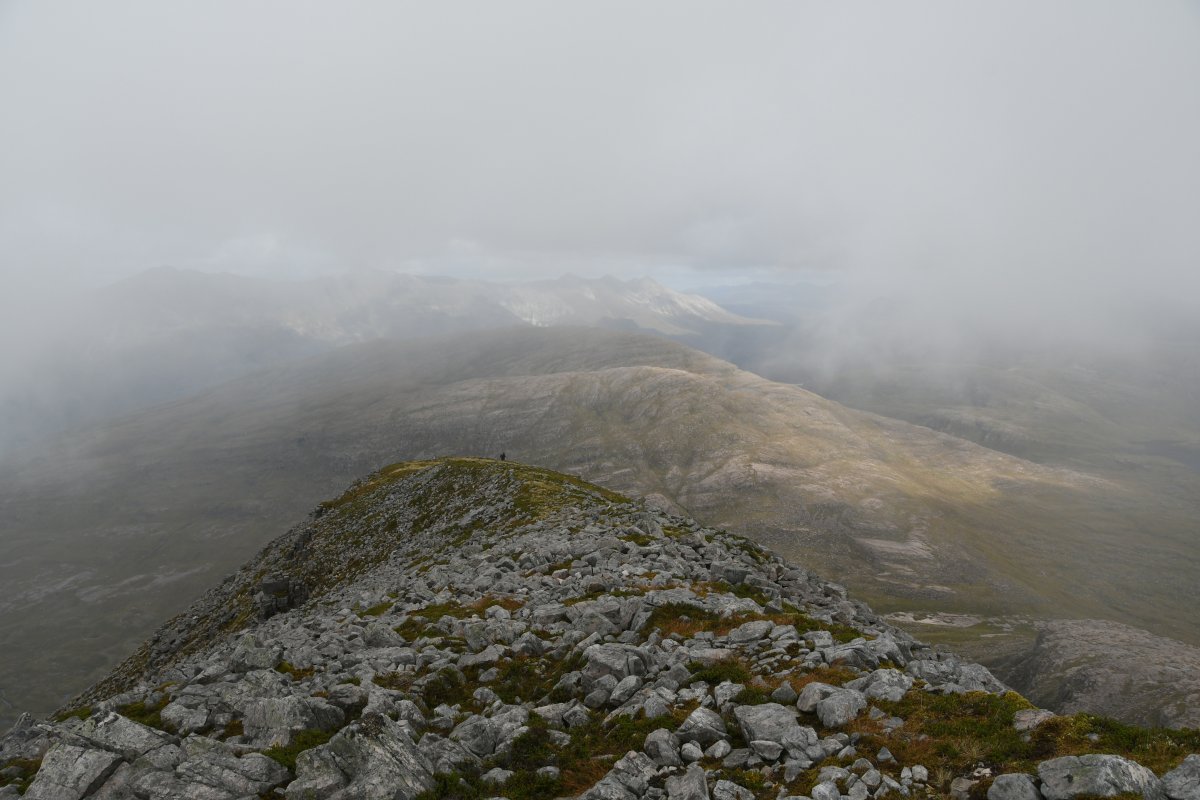 Happily the clag lasted only about 5 minutes after we arrived on the summit, so we spent close to an hour sitting around in sunshine enjoying the views.

A bit hazy – we could just make out Rum and Eigg to the SW out past Loch Kishorn. 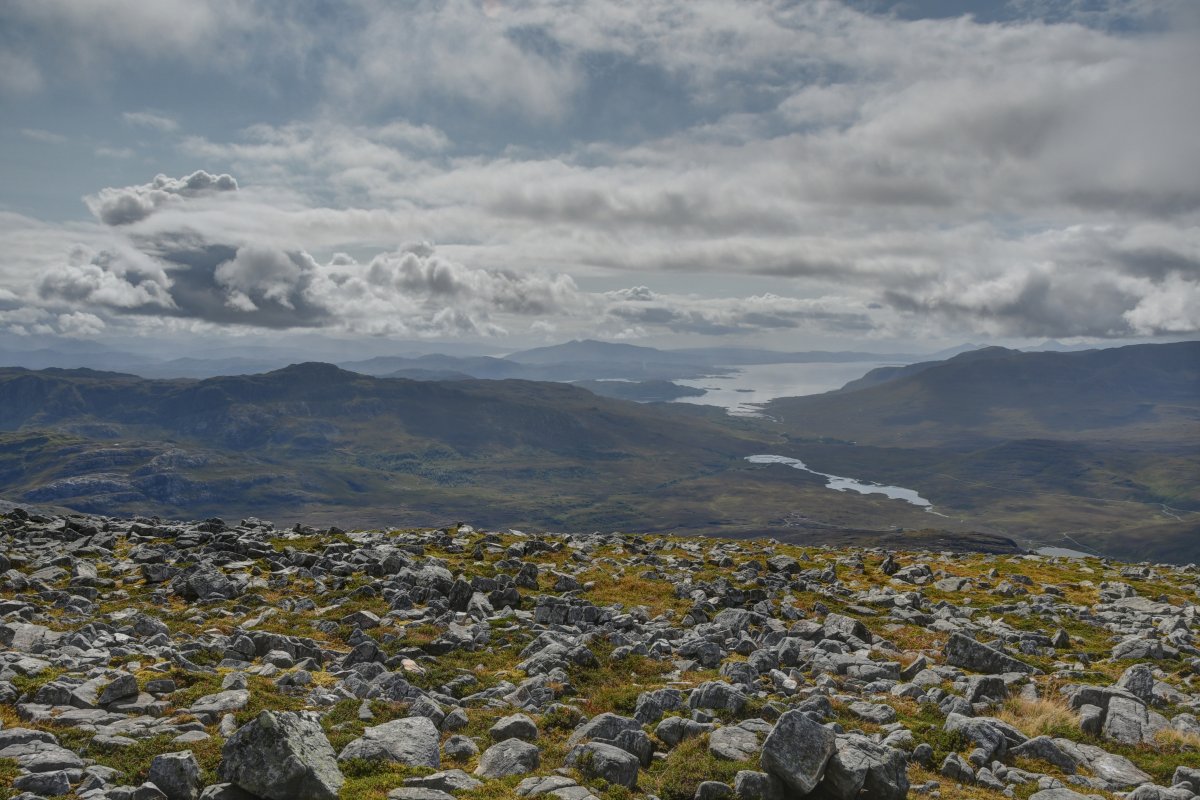 Nice view over Stuc Coire an Laoigh to Maol Chean Dearg and An Ruadh Stac.

Maol Chean Dearg and An Ruadh Stac from Spidean Coire an Laoigh: 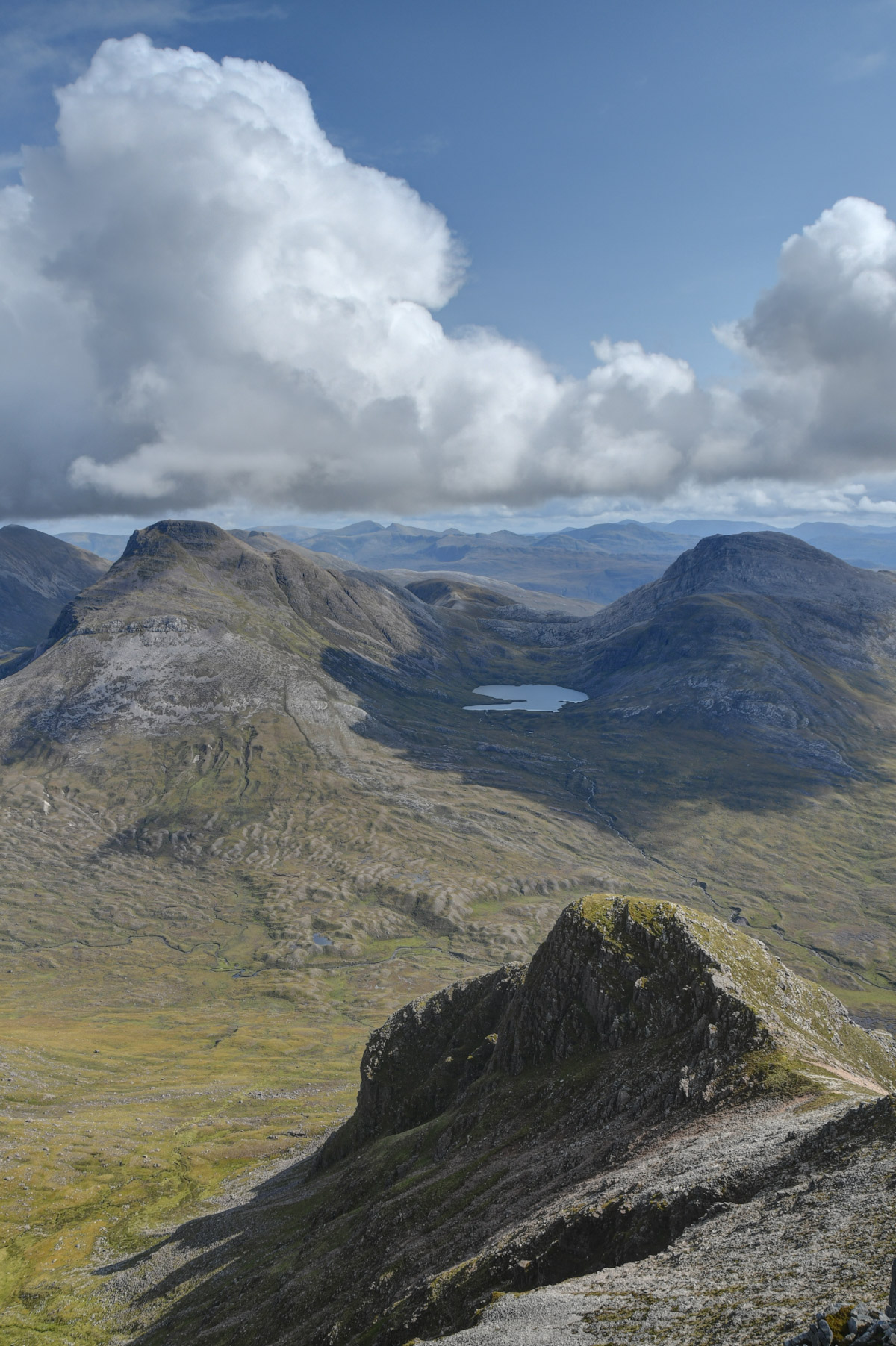 Lots of fine memories of the great hills on the south side of Glen Torridon. 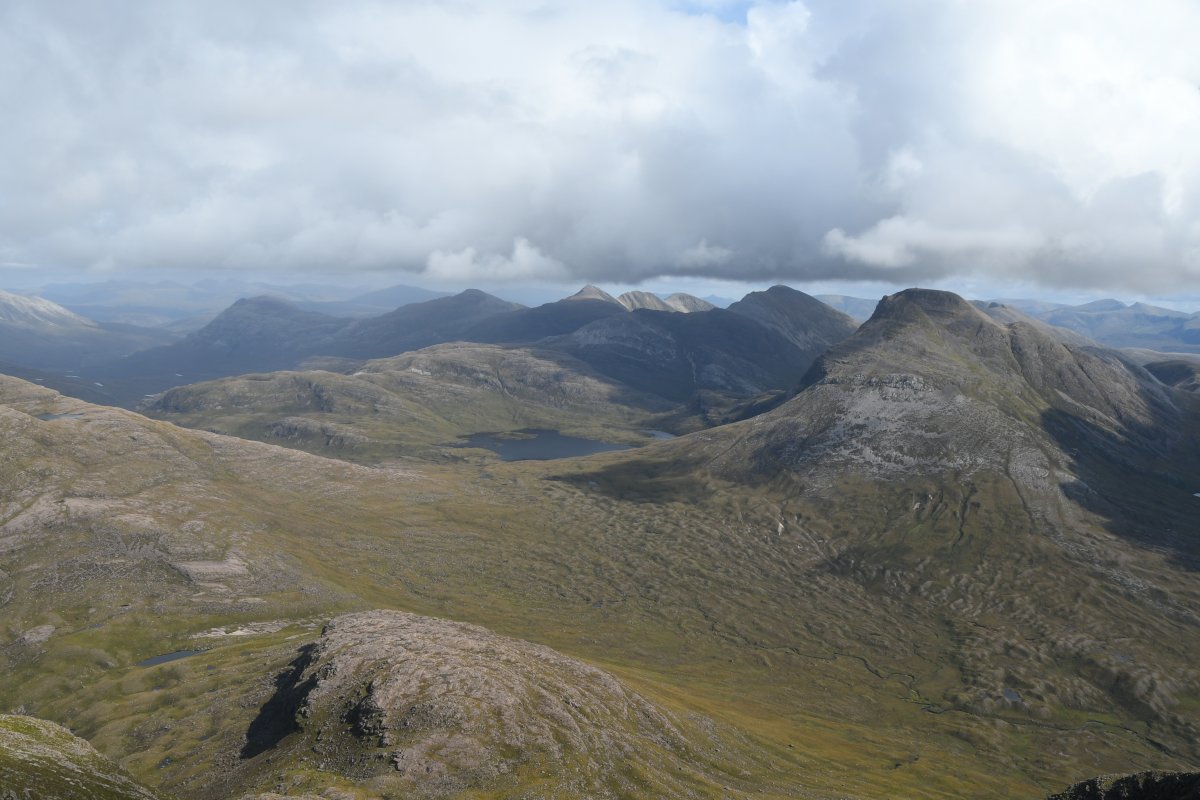 Beinn Damh is quite similar in architecture to Beinn Alligin. 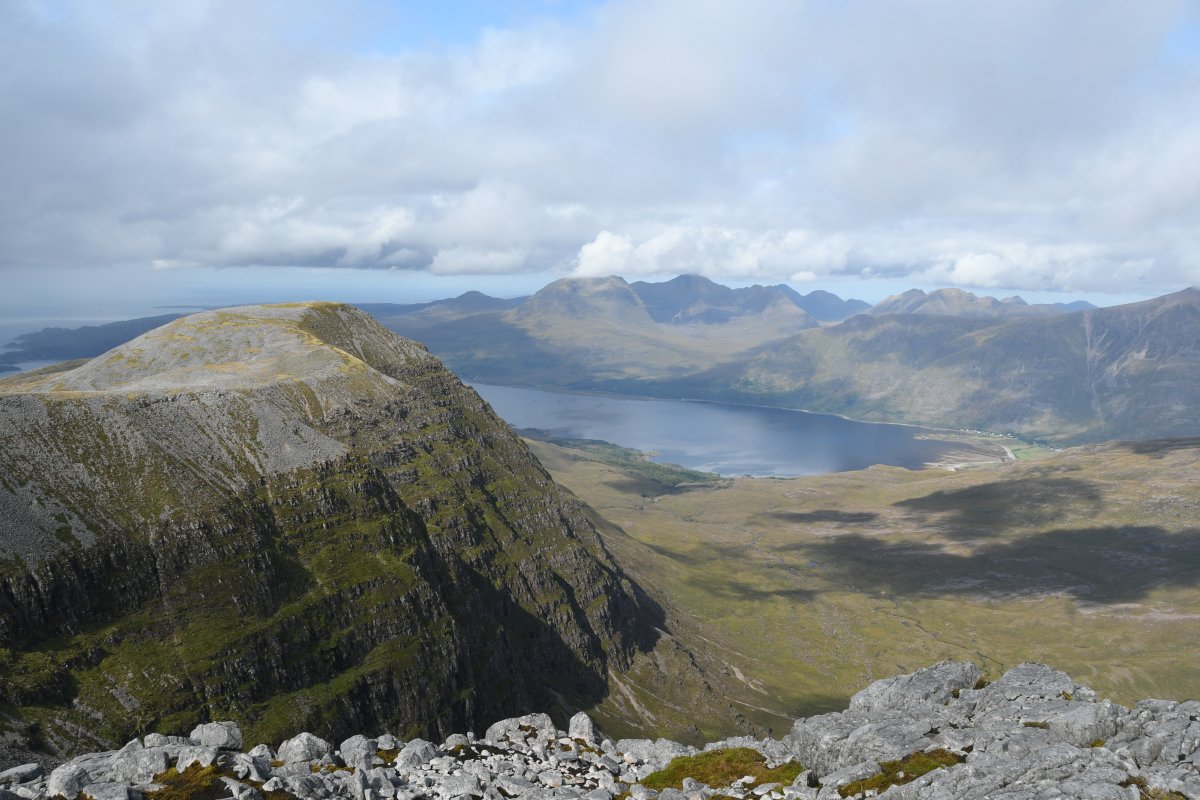 Then we were off, descending from Spidean Coire an Laoigh to Spidean Toll nam Biast and a view back to the summit. 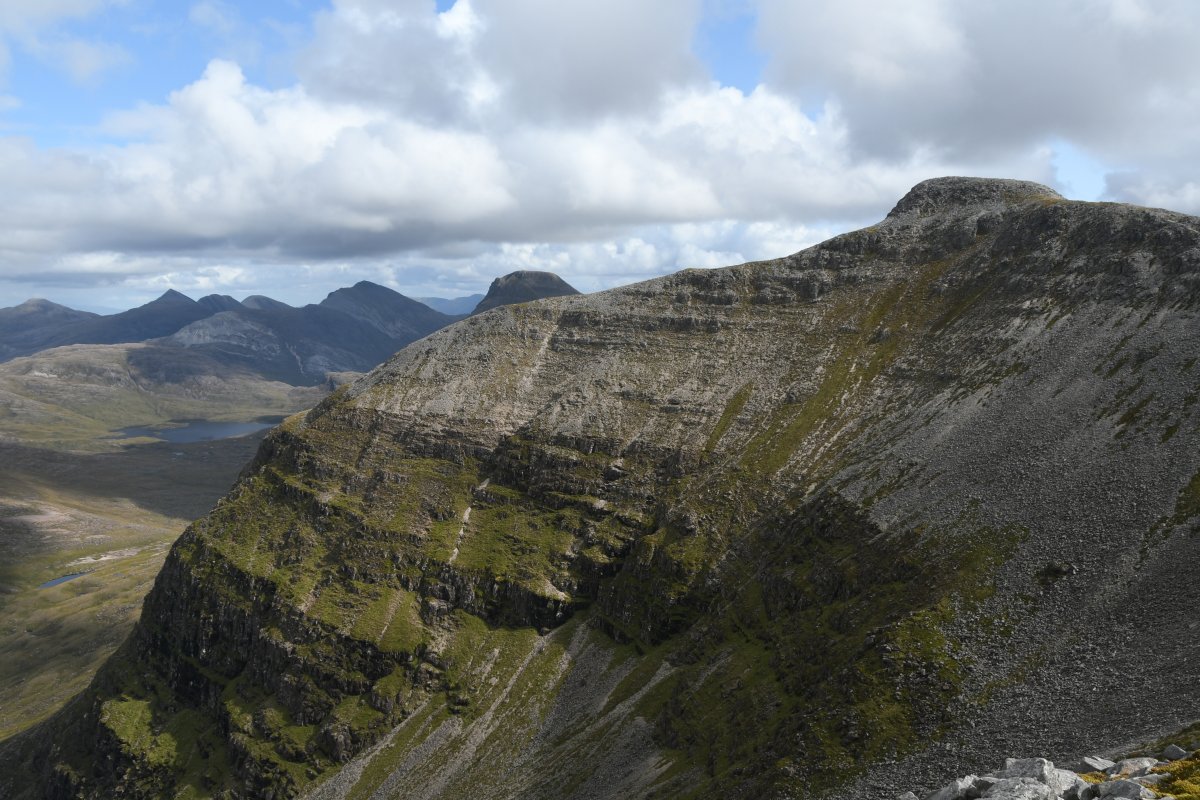 It began to cloud a bit, so once again we didn’t visit Sgurr na Bana Mhoraire – I think a pre-dawn winter ascent of this one is needed.

Along the glen Beinn Eighe was glowing white in some sunshine. 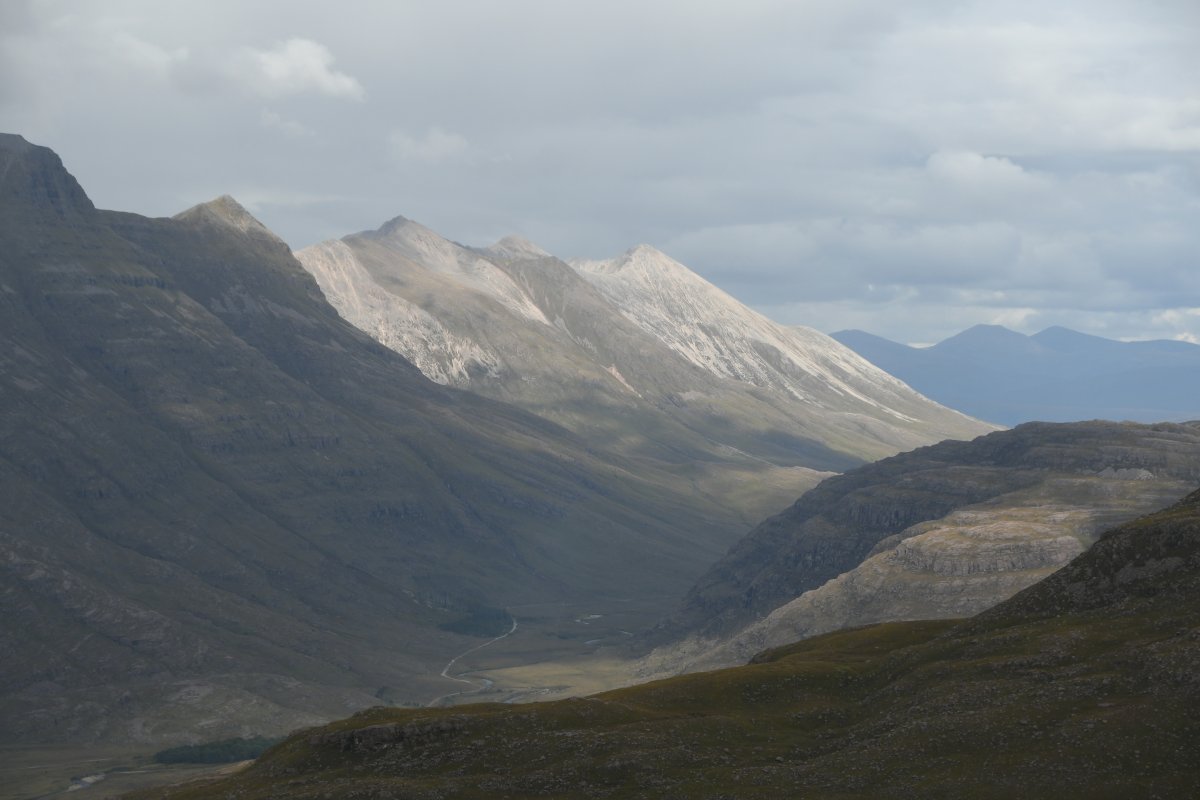 The path off Beinn Damh is still rather eroded in the upper reaches, but well built further down. Didn’t take too long to get back down to the waterfall – a midge jacket was needed to take a photograph. 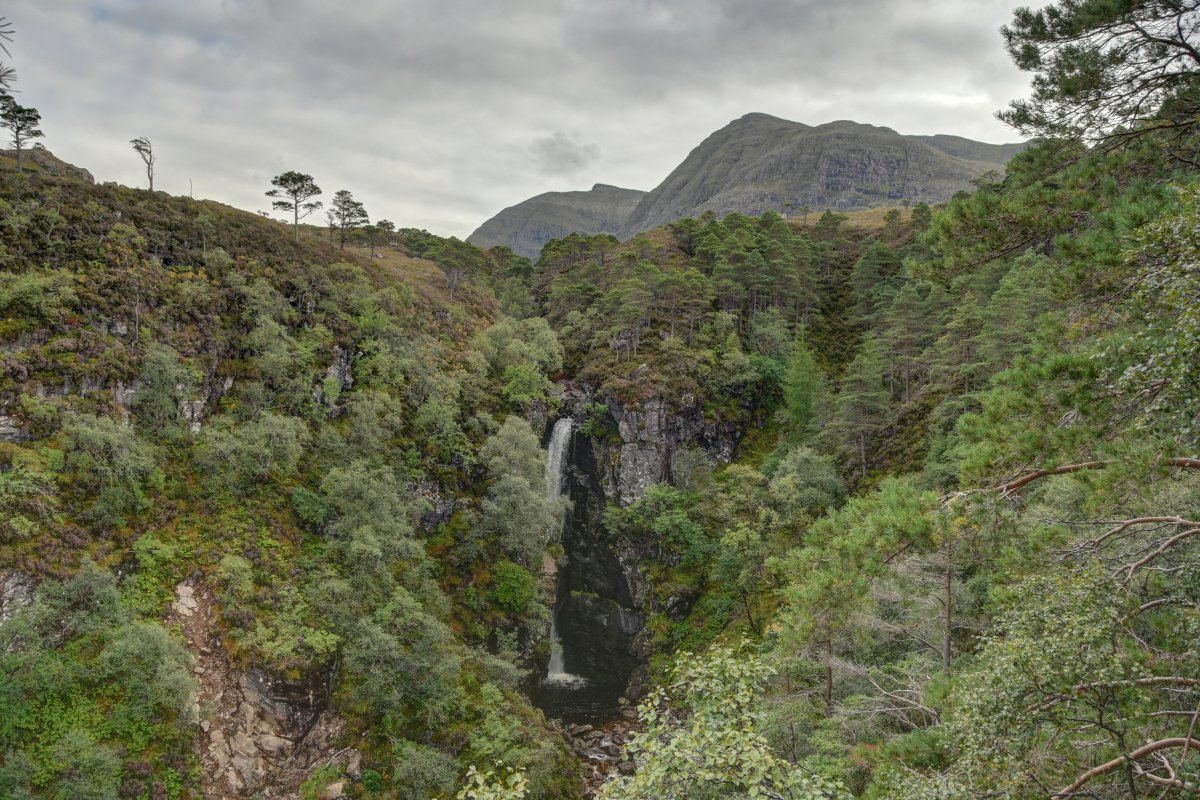 A very enjoyable Graham/Corbett combination, one we’d do again – hopefully in less than 10 years.