Saturday gave us a brief weather window before a wet and windy Sunday – decided on a hands in pockets Cairngorms wander over Macdui and Mheadhoin, 6 years having elapsed since our last visit to Beinn Mheadhoin.

Just took the easy route out to Macdui – Ski car park out across the Northern Corries and then round the shoulder of Cairn Lochan. A bit greyer than I’d been hoping for, but a nice enough day. 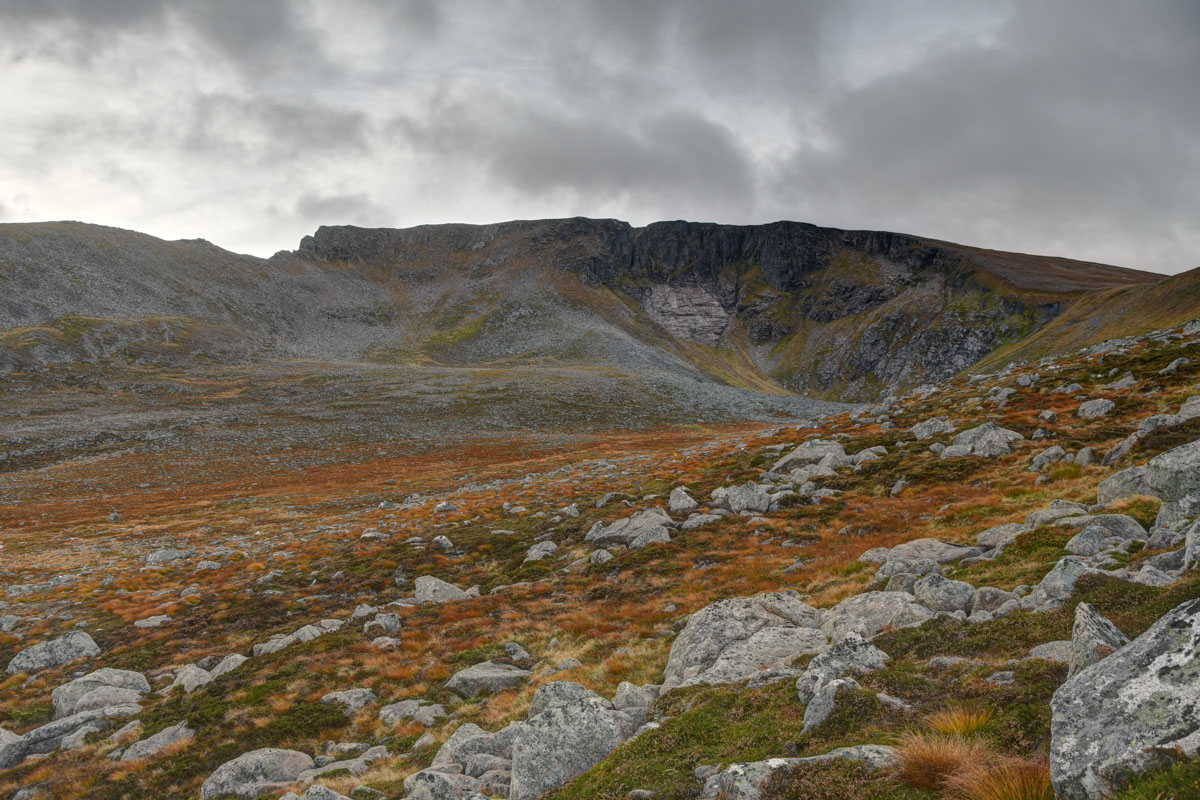 It misted in as we rounded Cairn Lochan so the views disappeared – a hare considered itself sufficiently concealed in the boulders as we passed. 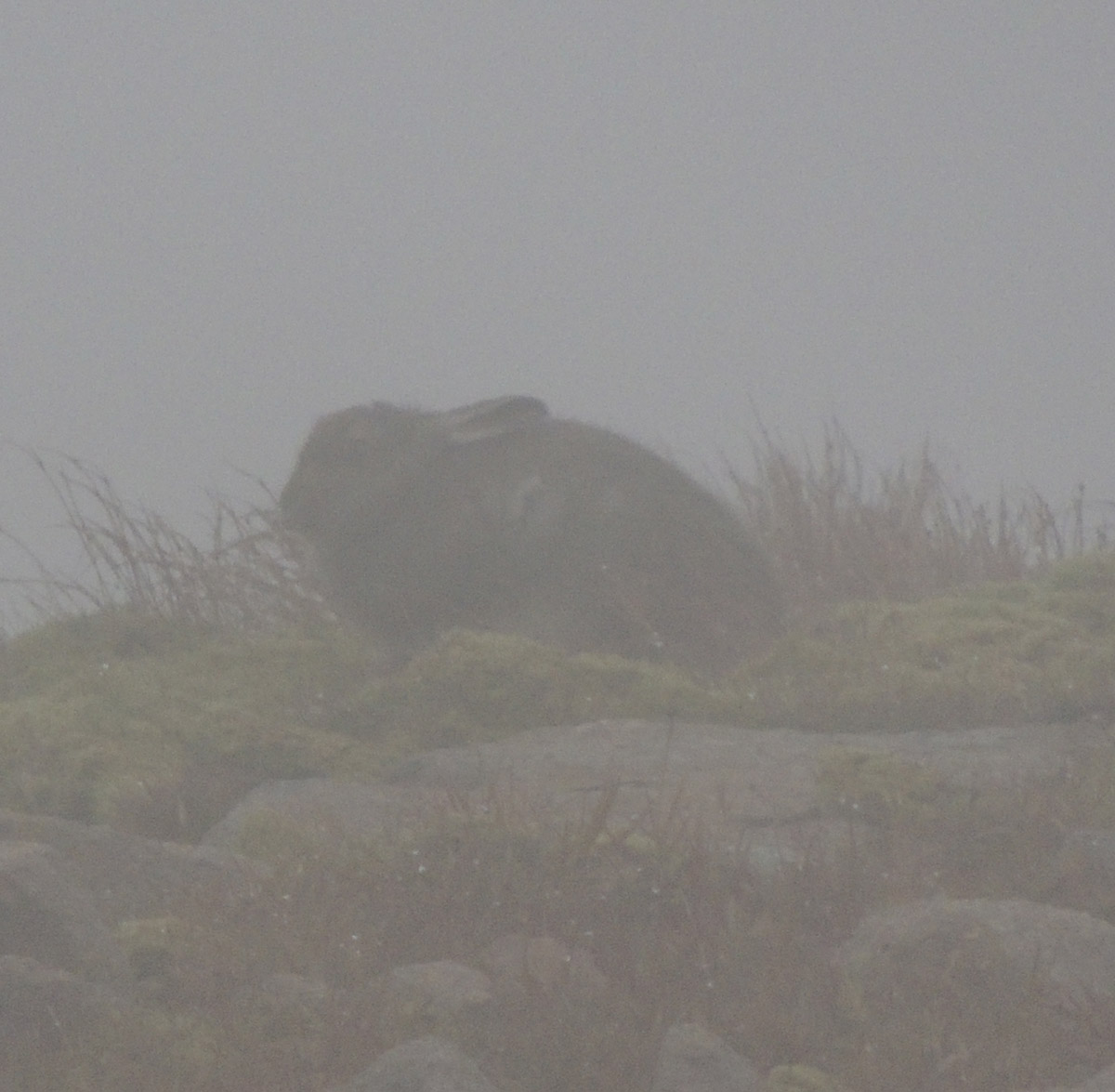 Didn’t hang about on a clouded Ben Macdui – with around 40 visits we’ve seen it on far better days. Continued on the path east towards Loch Etchachan, as we went the clouds thinned and broke. The seasons have turned and the plateau has an autumnal look now, possibly it’s least attractive with the absence of live vegetation along with the absence of snow. Still one of my favourite places though. 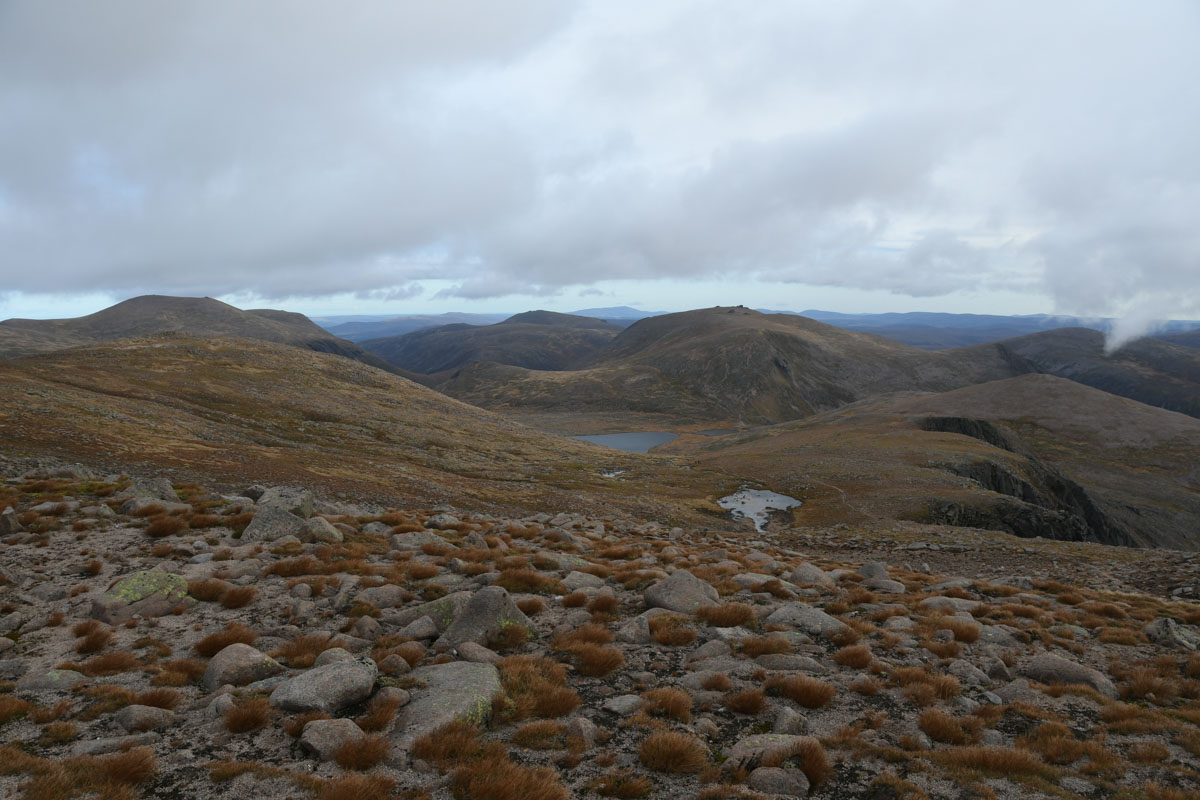 We got a little sunshine as we approached Loch Etchachan. 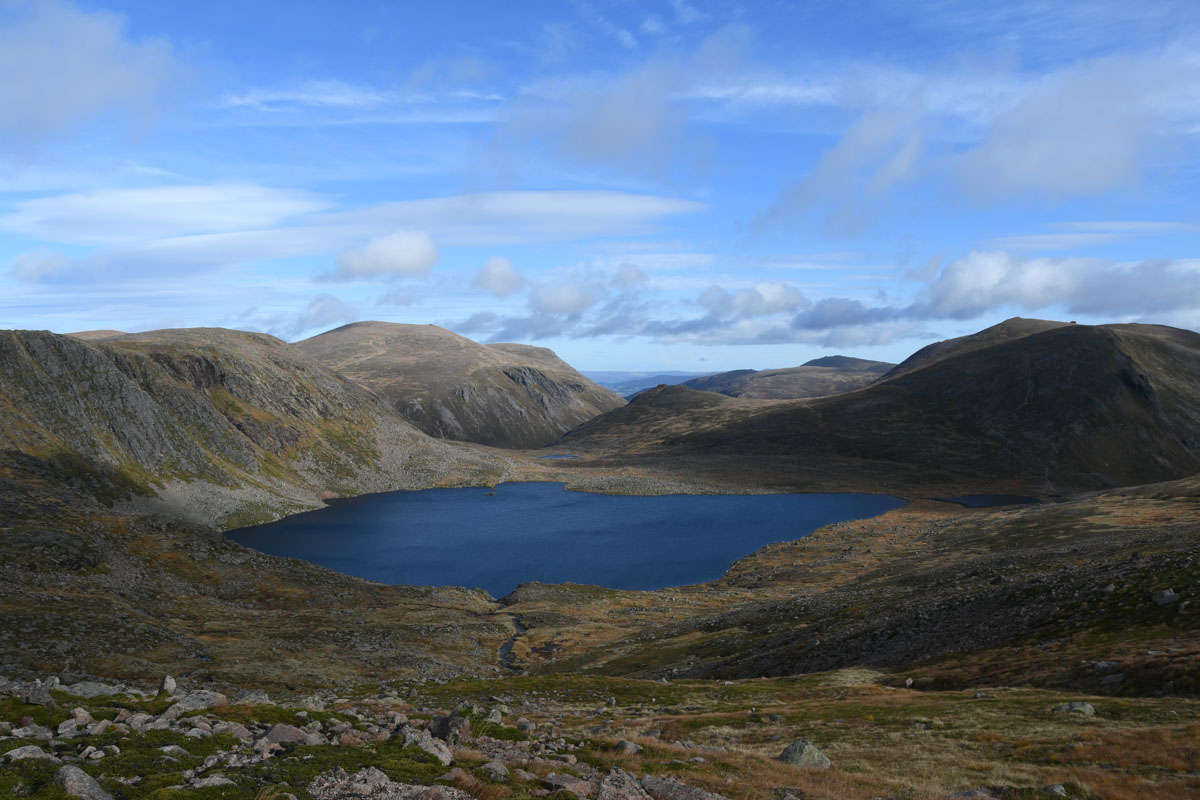 Headed up Beinn Mheadhoin, just a couple of hundred metres on a loose path. Behind us the recognisable profile of the cliffs of Coire Sputan Dearg. 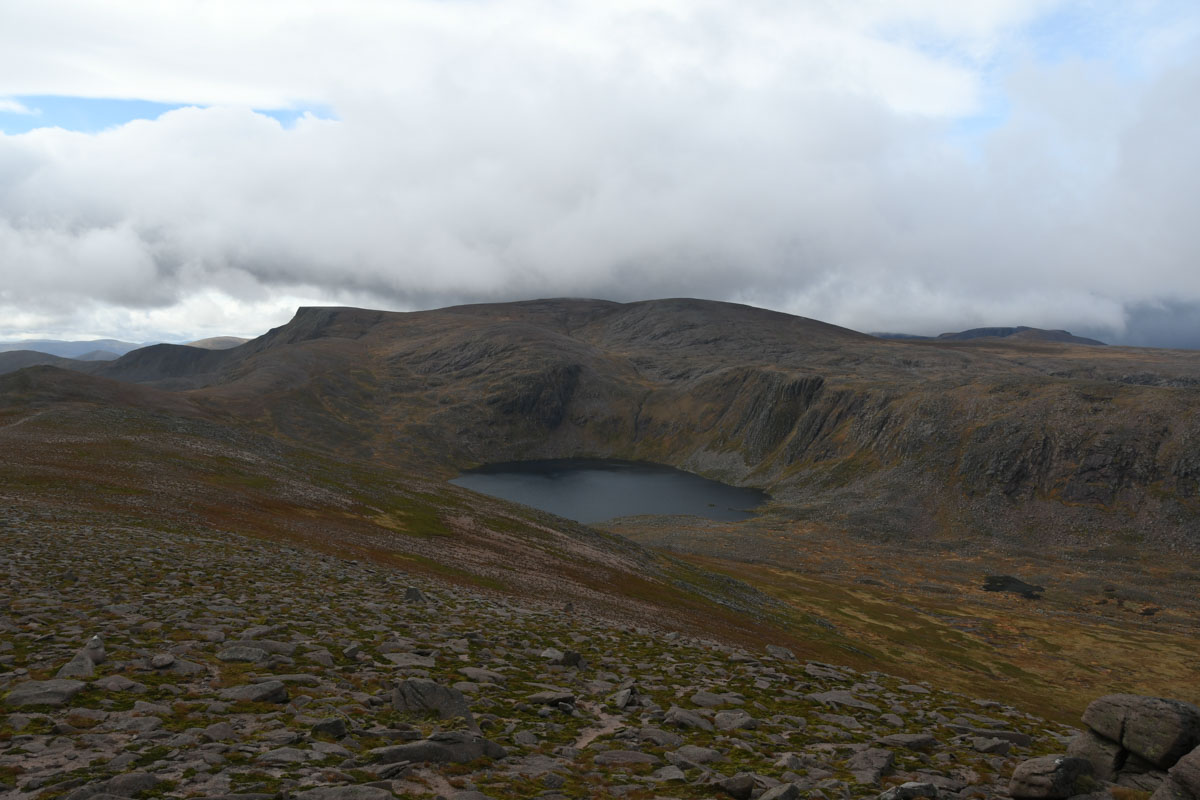 Then the walk along the flat top of Beinn Mheadhoin, climbing tors along the way. 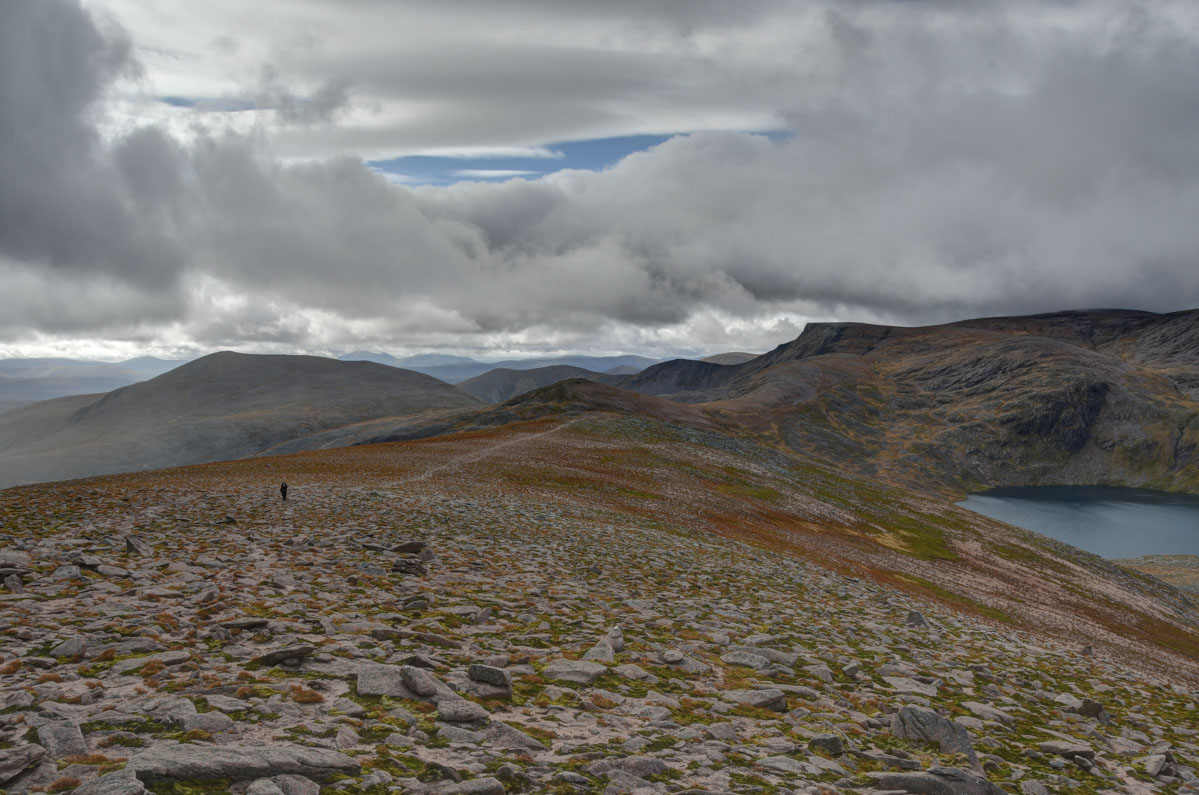 We had some lunch at the top, after a quiet few hours of wandering the summit was very busy. Hunkered down behind a quieter tor a little away from the summit and enjoyed the views.

Carried on NE to the east end of Loch Avon, nipped up the tor on the way down which provided part of the hill’s profile from our more frequent walks up Cnap Coire na Spreidhe.

Tor on the descent NE: 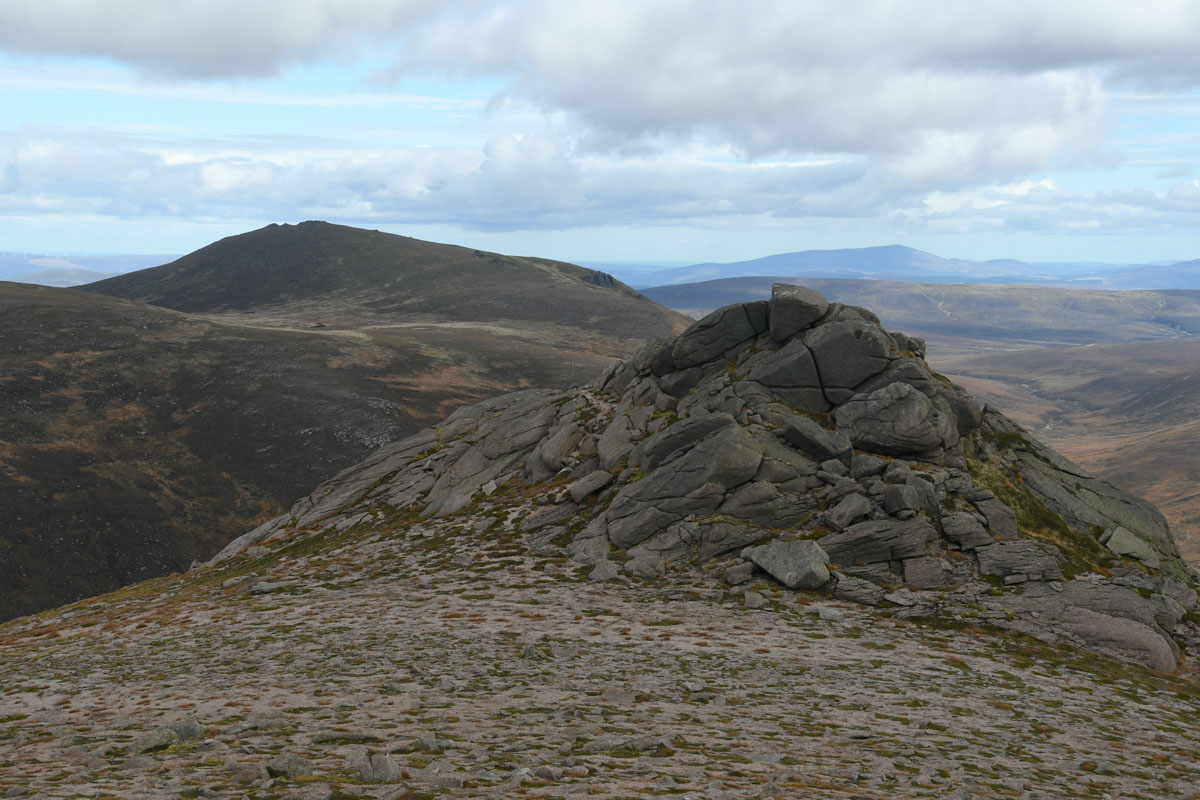 It’s a simple descent to Loch Avon, a little steeper on heather for the last 200m. Views develop west along the loch.

Loch Avon and Stac an Fharaidh: 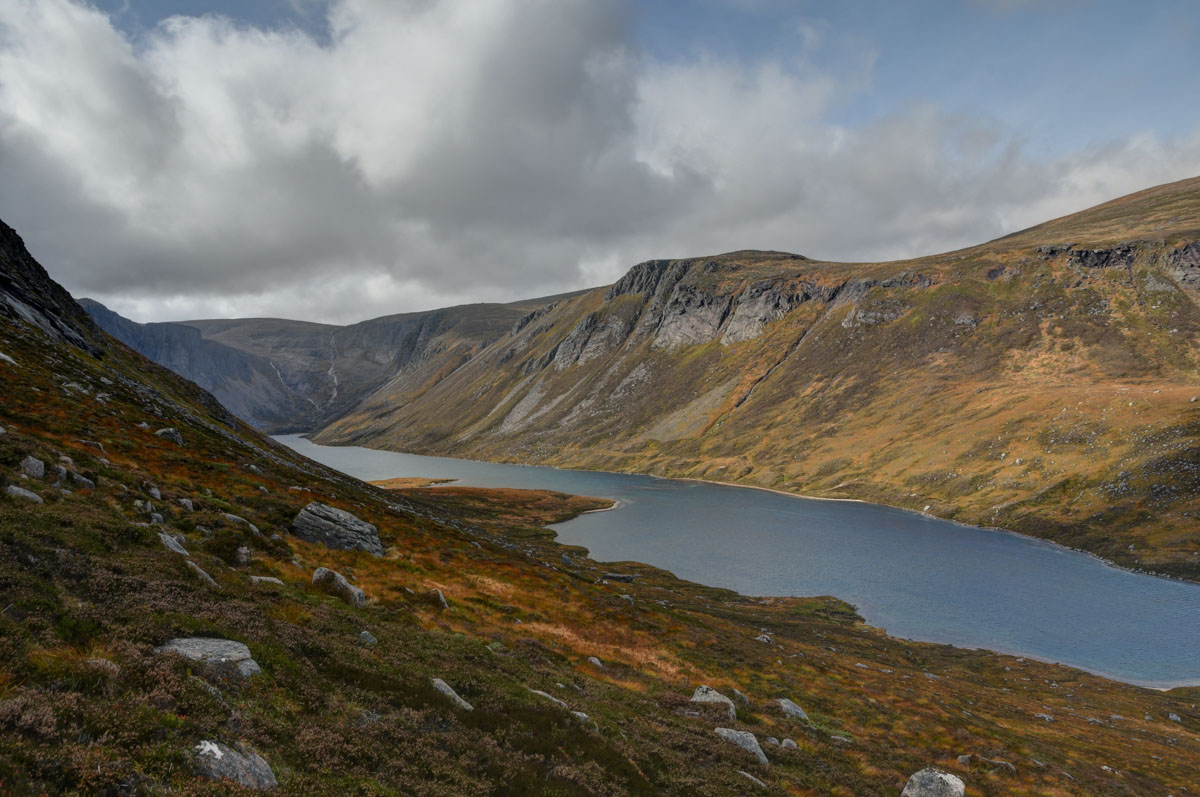 Nice view west along the loch. 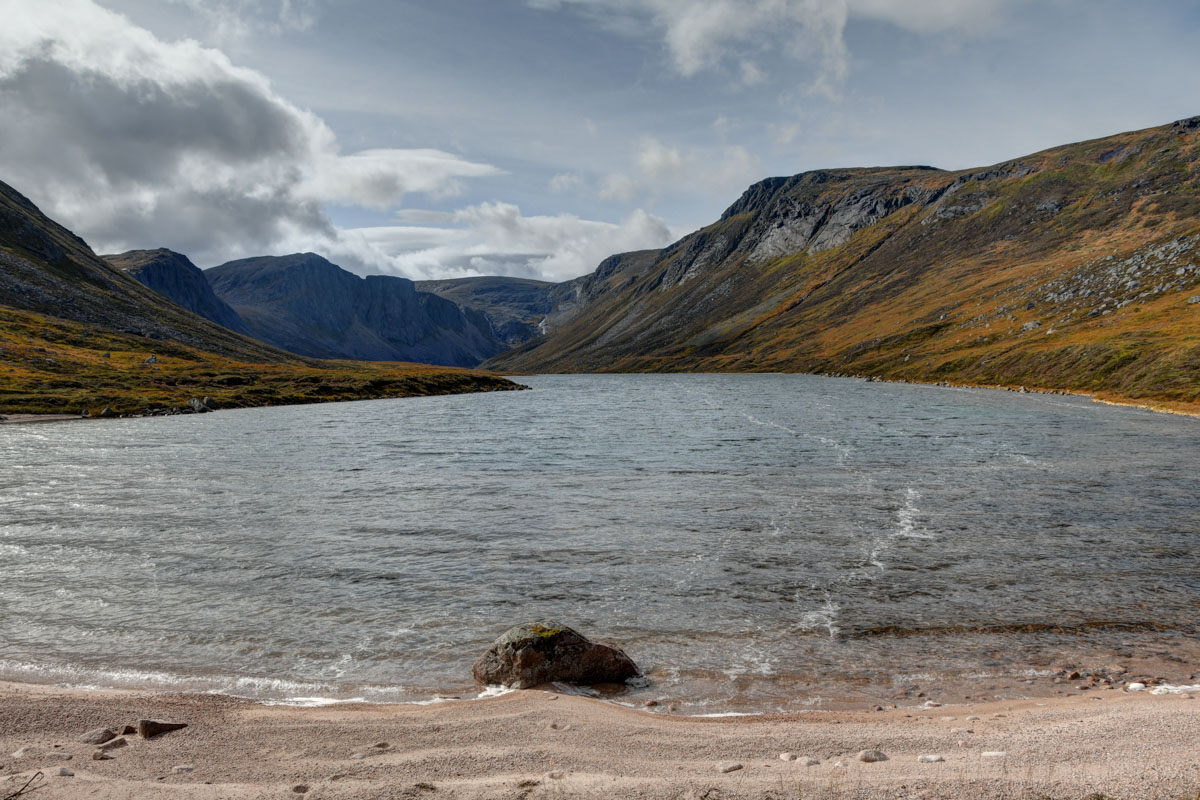 From here we took the path up to the Saddle (between Bynack More and Cairngorm). Then we took the little path that runs up from here to Ciste Mhearad (marked on the 1:25000 OS but not the 1:50000). This is a nice wee route. Saw a group of more than 20 ptarmigan – they’re now gathered for winter. 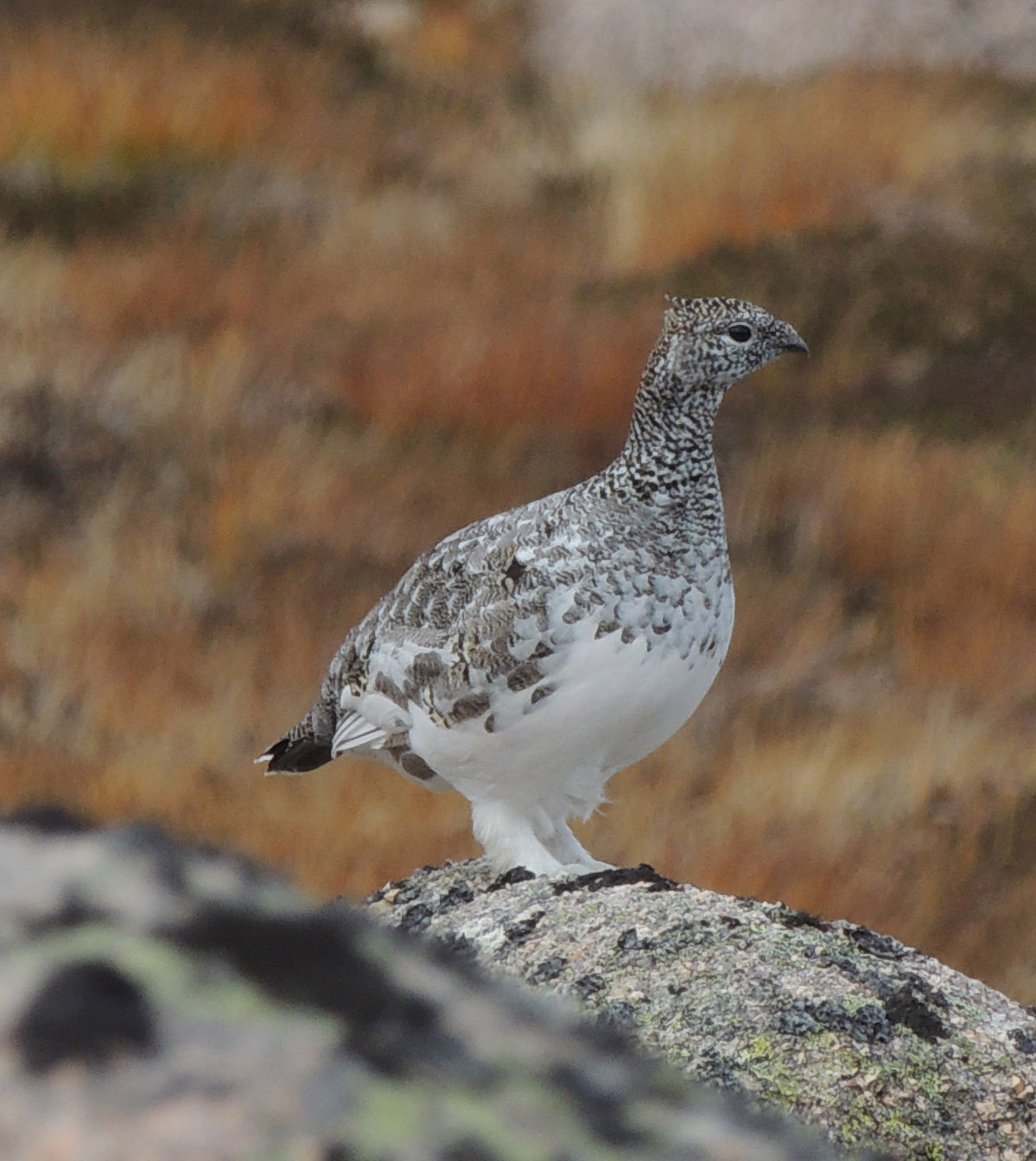 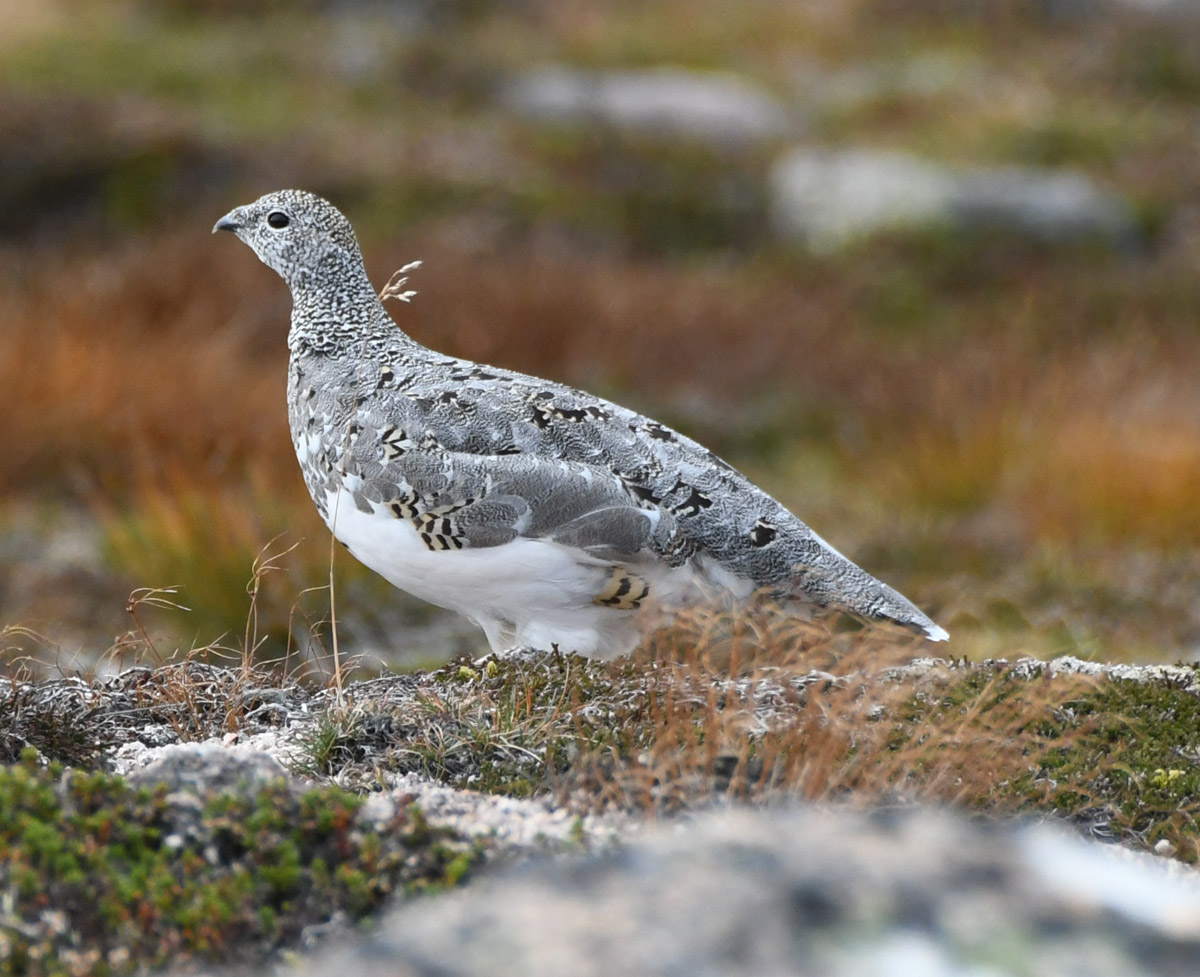 The path tucks into Ciste Mhearad – no snow left here now, just the mosses that live under the longer lying snow patches. 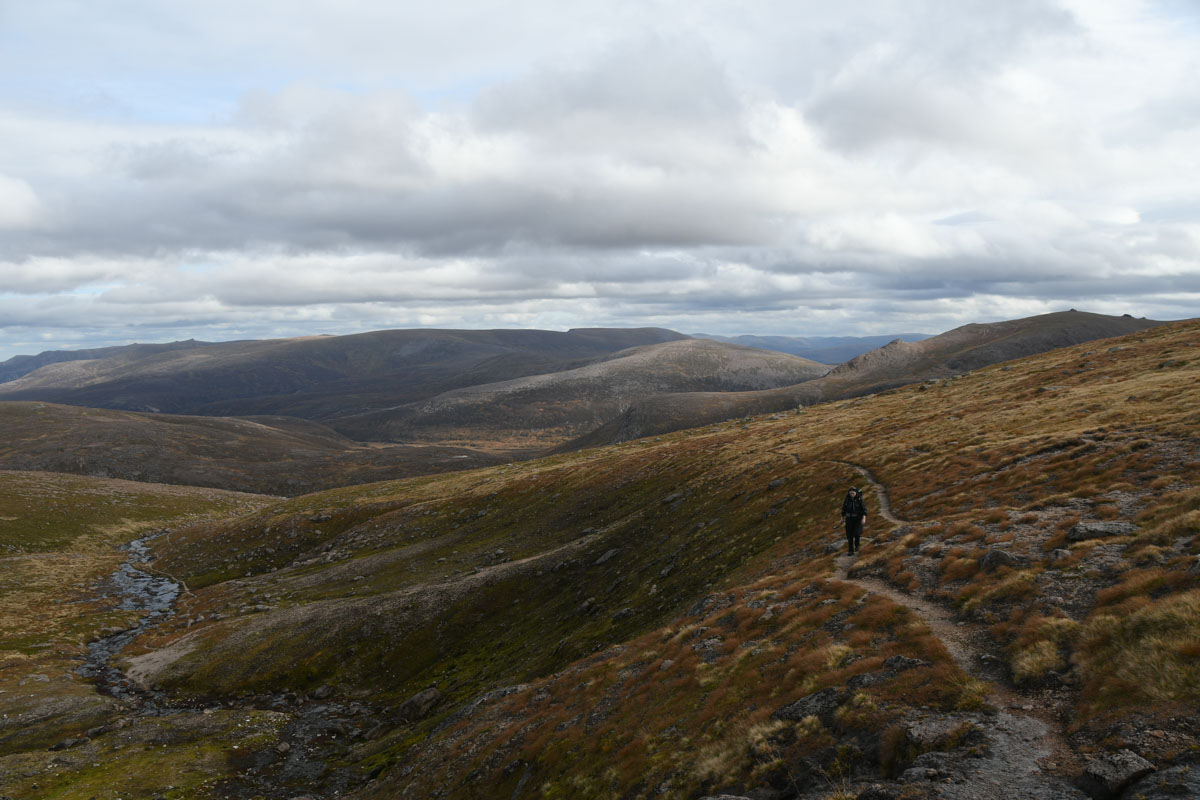 We skirted Cairngorm and headed for the Ptarmigan restaurant. The funicular wasn’t running and the restaurant closed so this was quieter than normal.

Took the path back down to the car park. This has been rebuilt in the last few years and is in good nick – a quick descent.
A small herd of reindeer was grazing near the restaurant – always nice to see these placid animals. 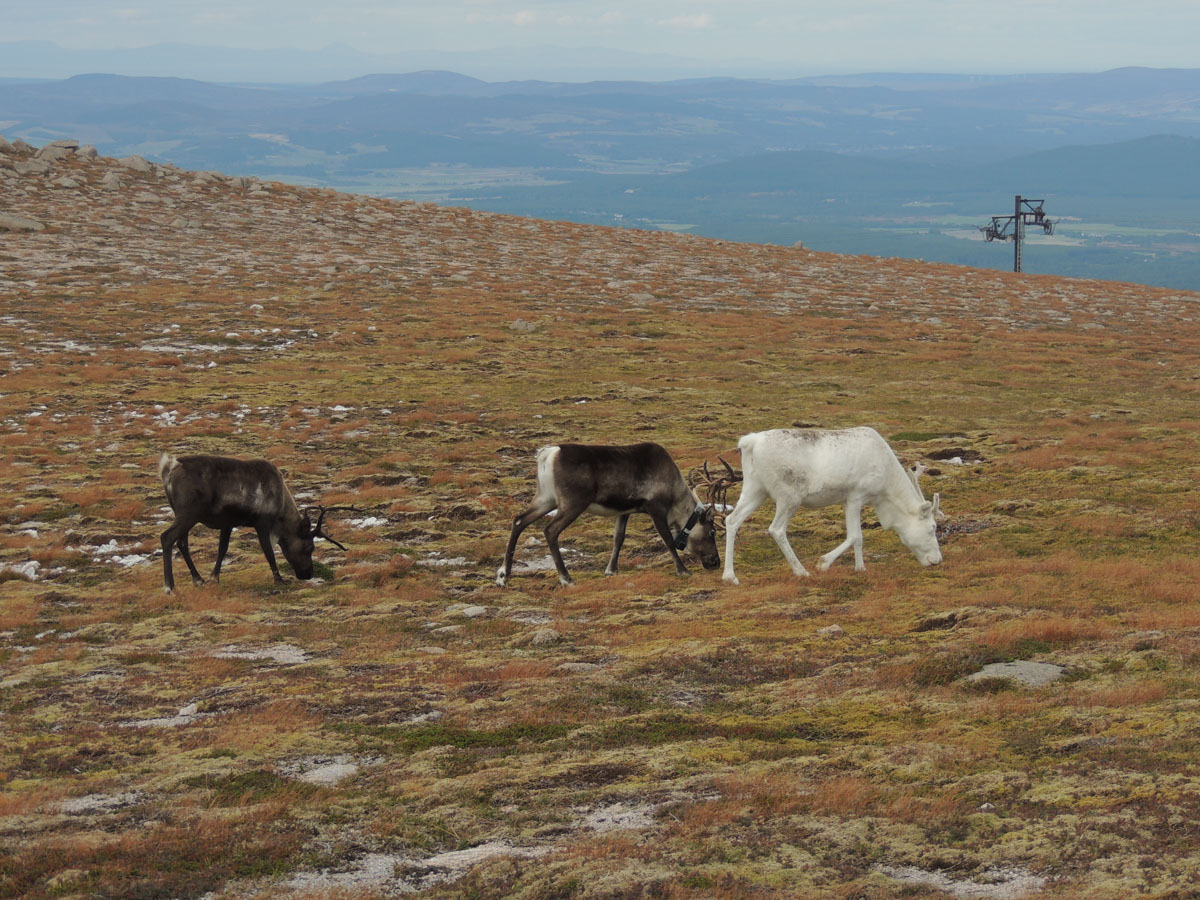 Back to the car – not the most amazing of days, but a relaxing ‘Gormsy wander nonetheless.