As always the forecast was being closely monitored all week. Initially it looked as though a high camp might be in the offing, but as the details firmed it was clear that a transient high pressure would pass by in the early hours of Sunday.

Decided to go for a day walk and visit some hills we’ve not set foot on for 14 years.

Drove down Glen Etive, surprised in October by the volume of camper vans and tents present.

A fair number of cars were already parked at the bridge at Coileitir, despite our arriving just after dawn. Not sure if some were at a bothy.

Happily, there’s a little more parking these days so we parked about 100m past the bridge.

My main memory of getting booted in Glen Etive is of being blow-torched by midges but they seem to have gone to sleep now.

The Glen Etive/Blackmount Estates have a “preferred route” system in place for stalking – a shame that the map detailing these has sun-bleached to the point that the routes are no longer discernible. Headed on in the presumption that the munro “Red Route” was the preferred route.

Ben Starav from the bridge: 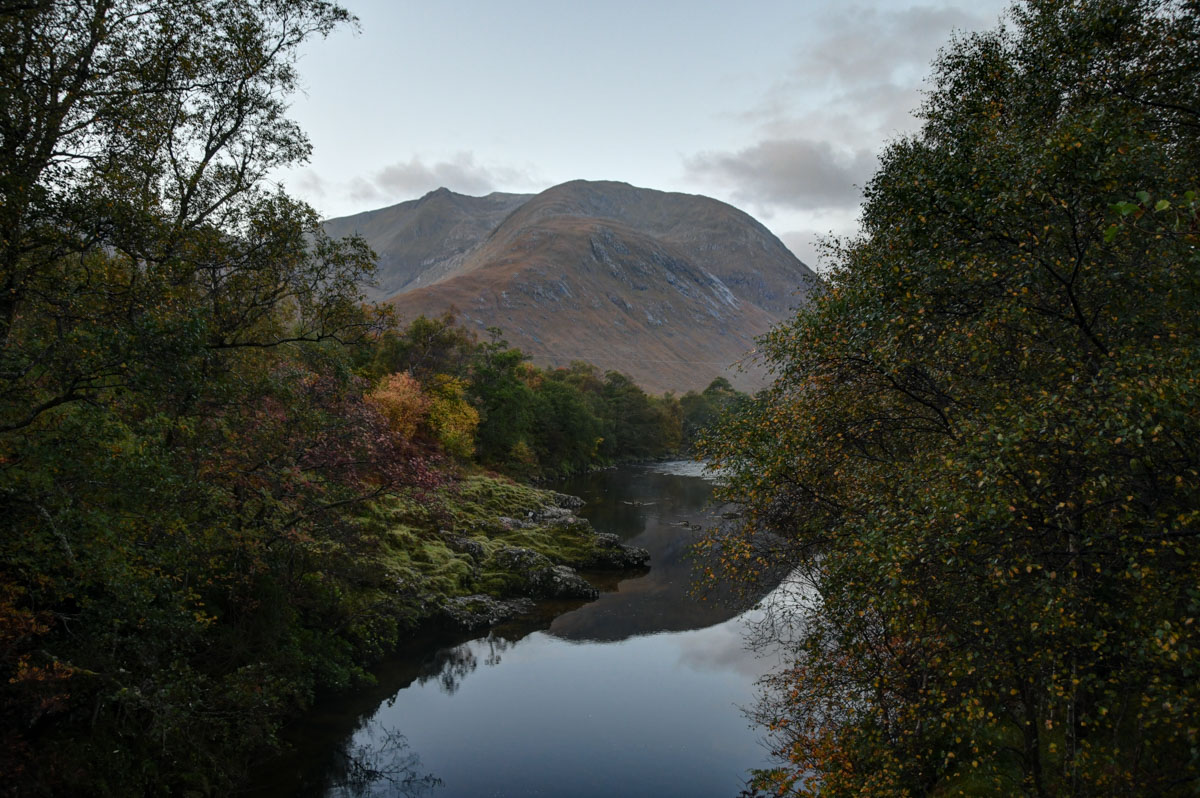 Took the track past Coileitir, the bypass around the property is a little muddy but easy enough. Carried on to the footbridge at NN 136 459.

The view up Glen Etive to the Buachaille Etive Beag is a cracker. 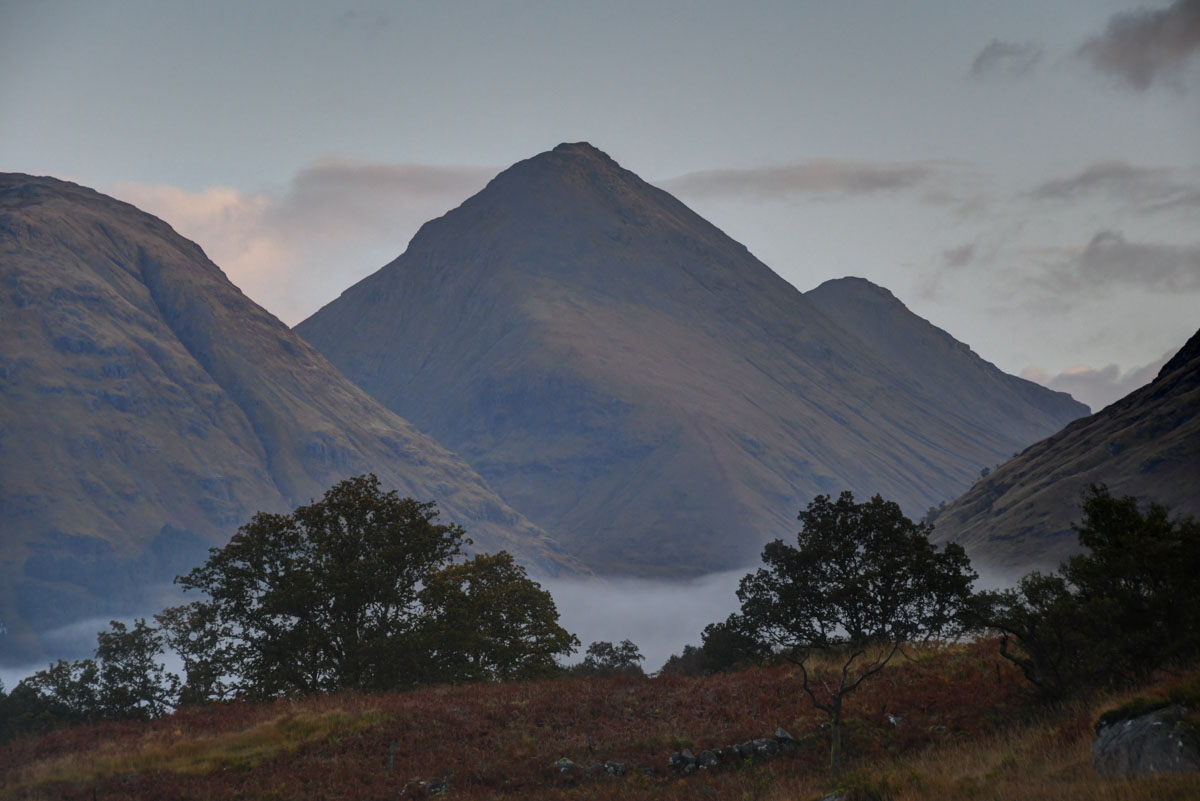 Wisps of mist were wafting up Glen Etive from the sea loch. 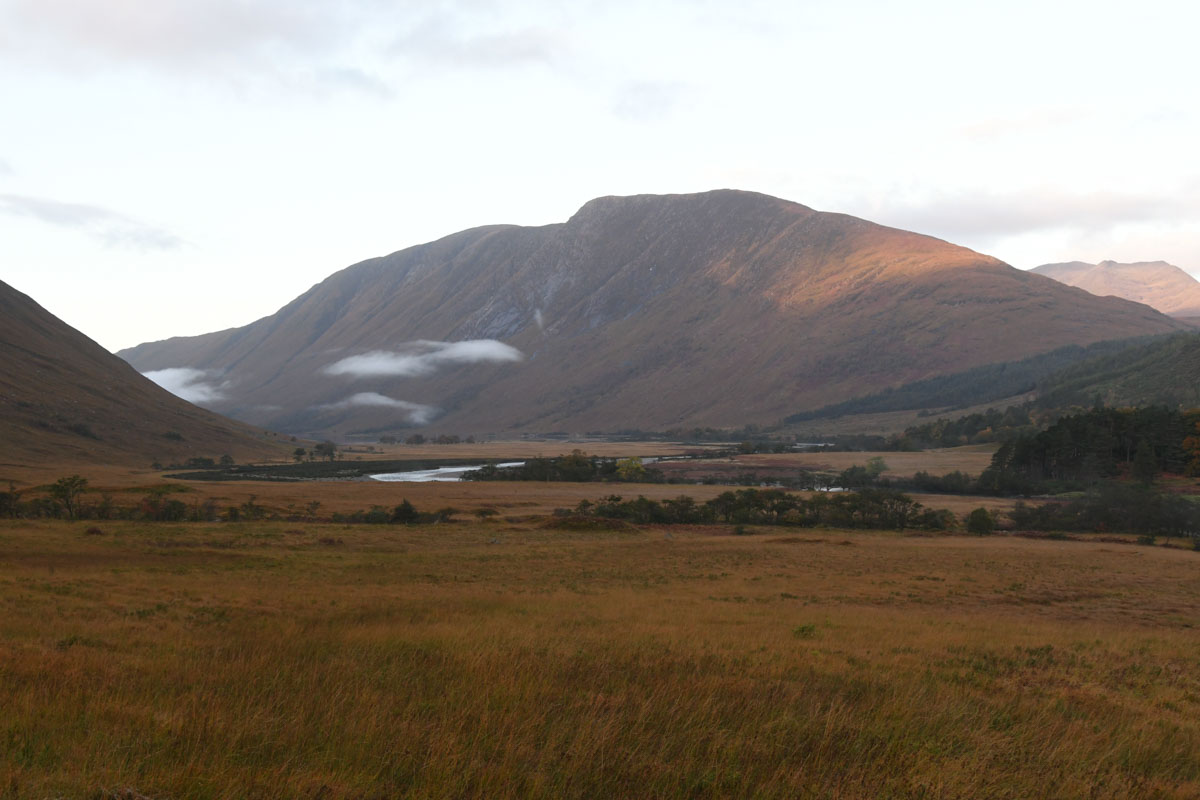 Ahead, the horseshoe comprised of Starav and Glas Bheinn Mhor loomed large: 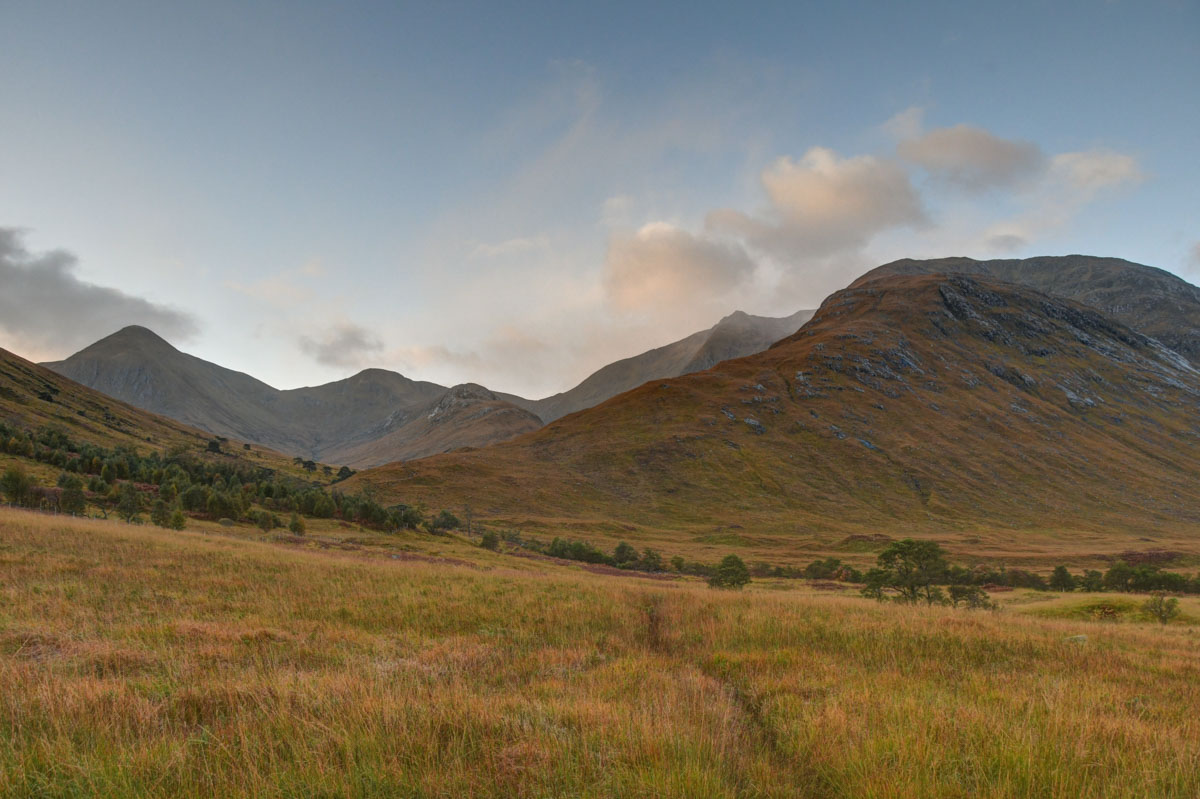 Crossed the bridge and then headed up the NE arm of Ben Starav – after Hebridean little hills it’s a contrast to tackle a big munro from sea level, it goes on and on!

Regardless, the views allow for a bit of distraction while the ascent ticks along. 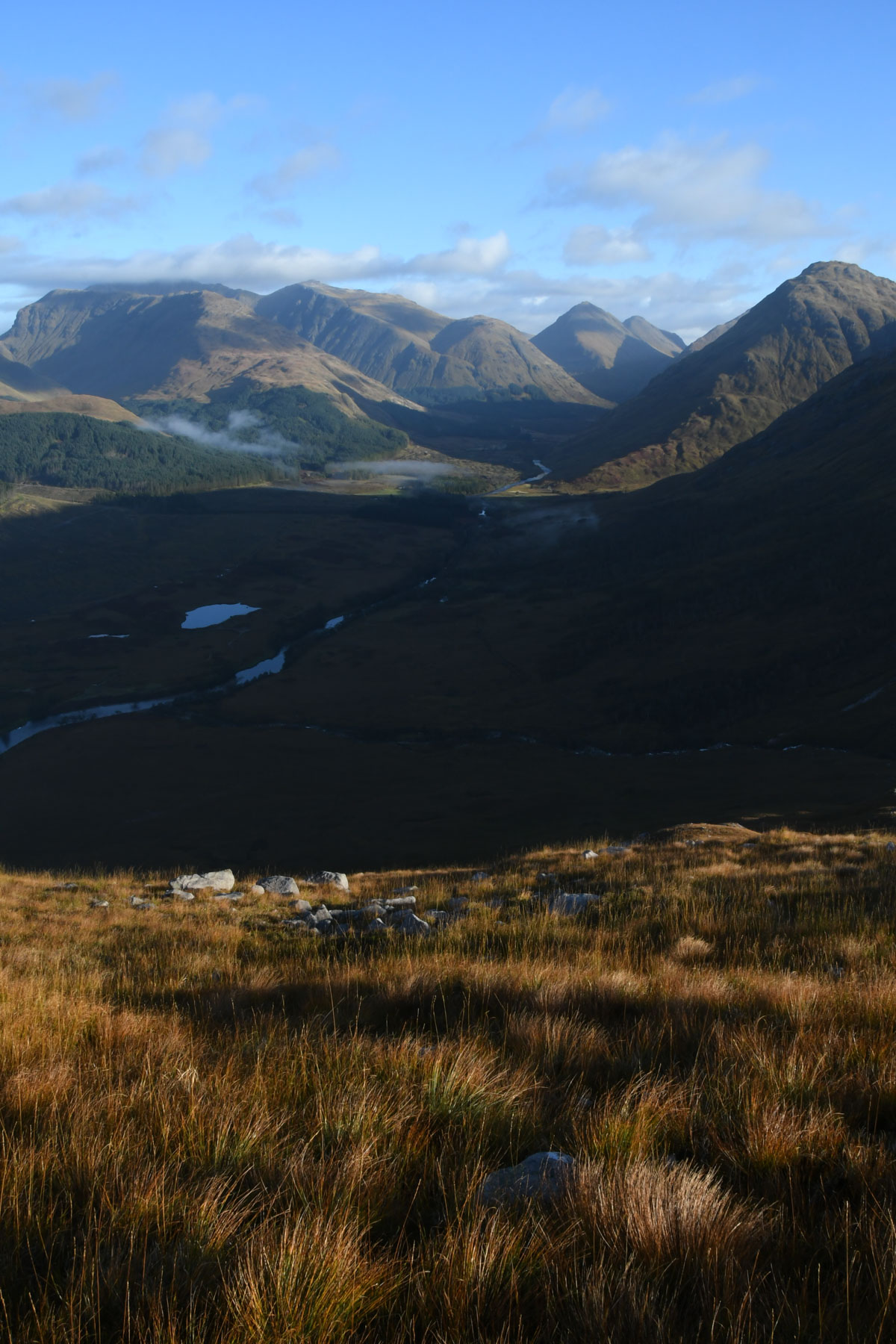 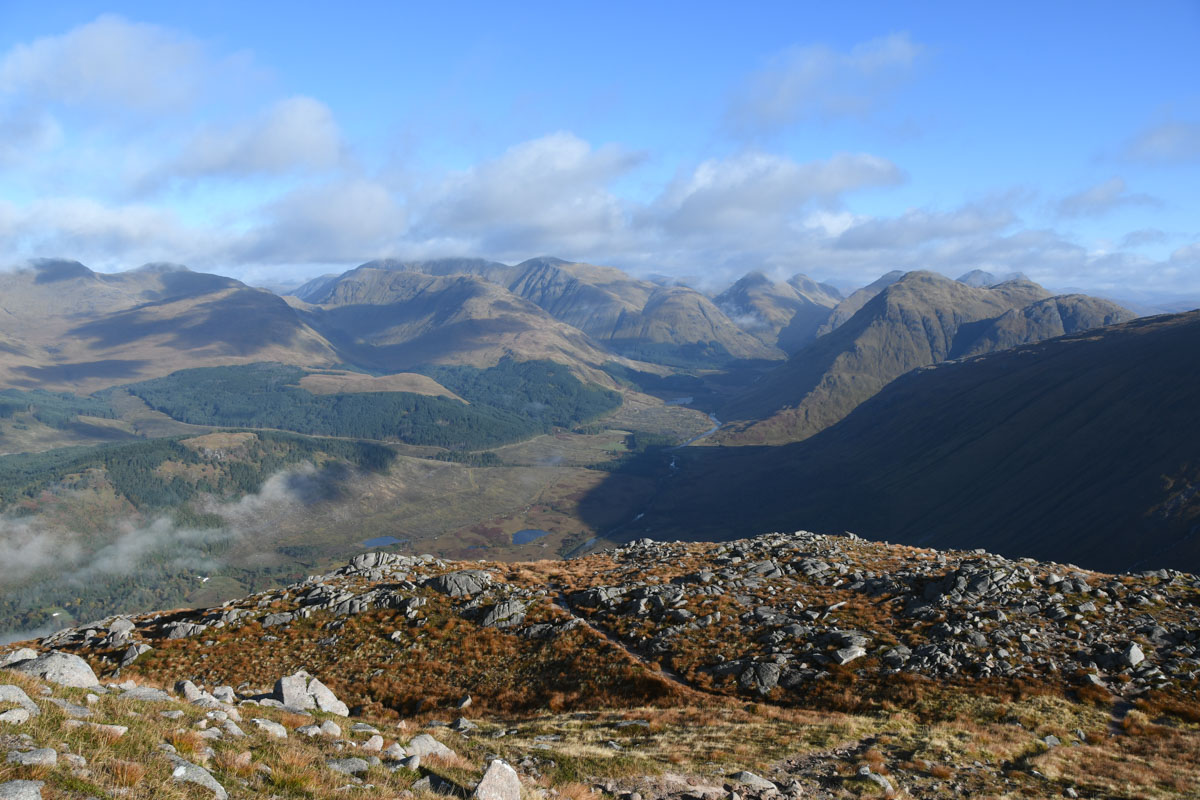 It was good to see a bit of short-lived snow on Stob Coir an Albannaich: 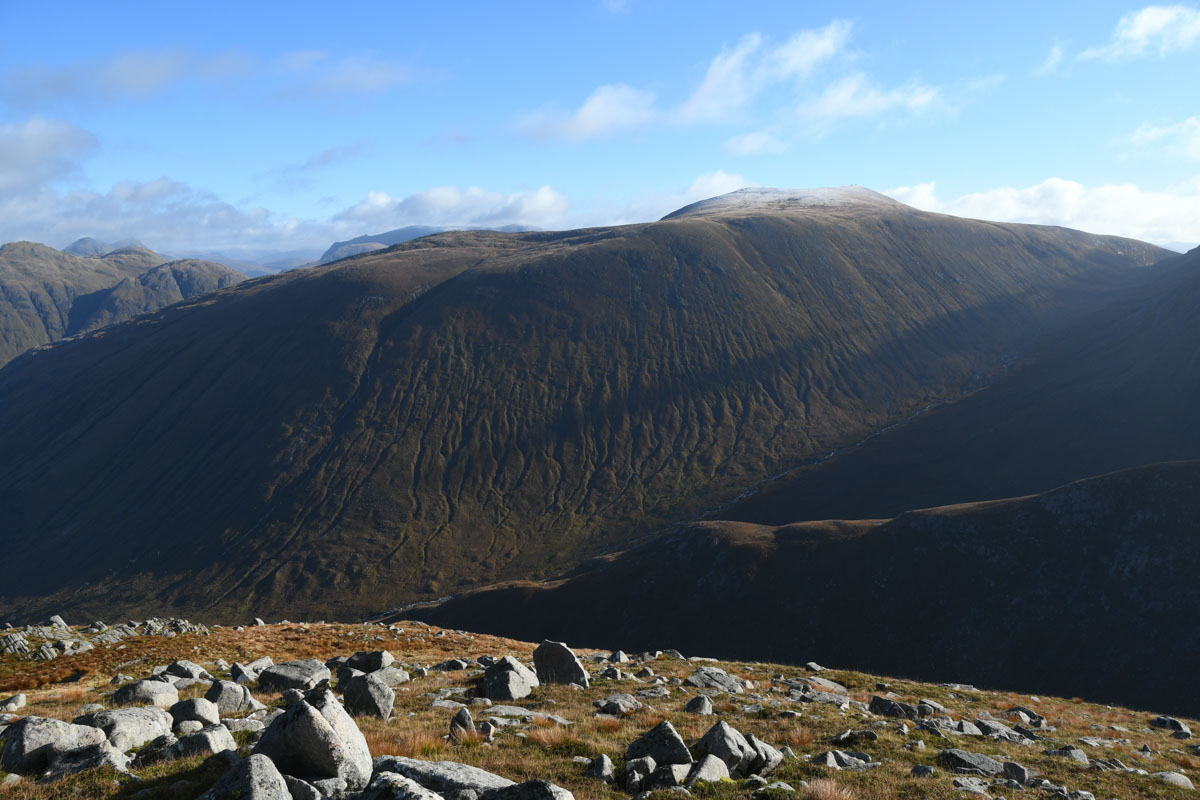 Once up to 800m the architecture of the summit ridges comes into view: 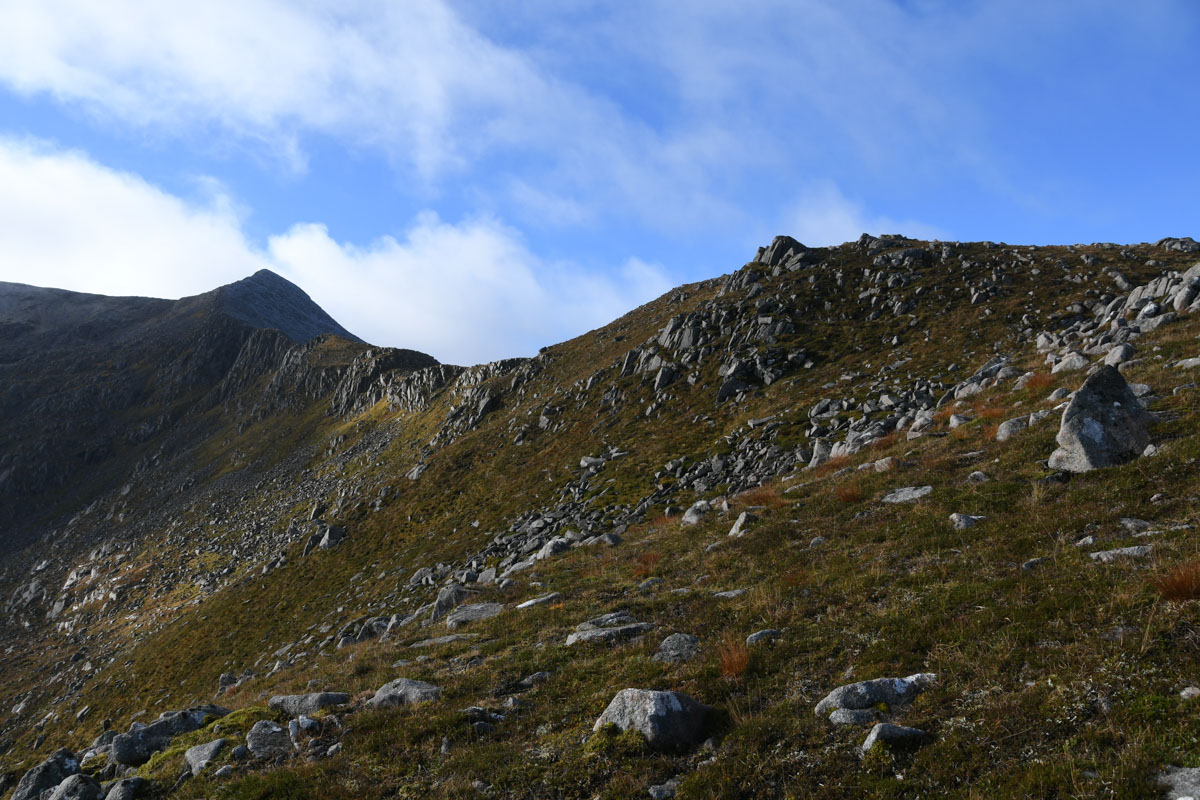 The wisps of mist were still clinging to the sea loch between us and Beinn Trilleachan: 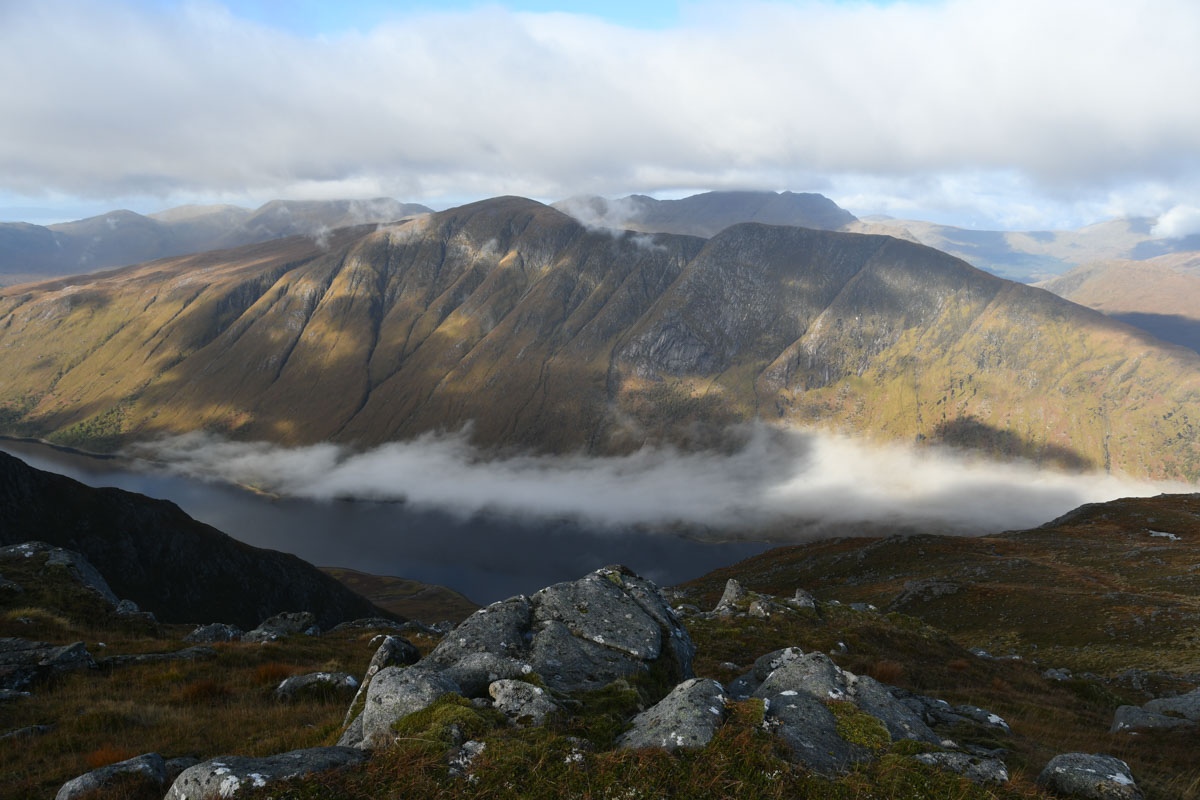 Paused a little before the final few hundred metres, the air was cooler but in the windless sun it still felt hot on ascent. 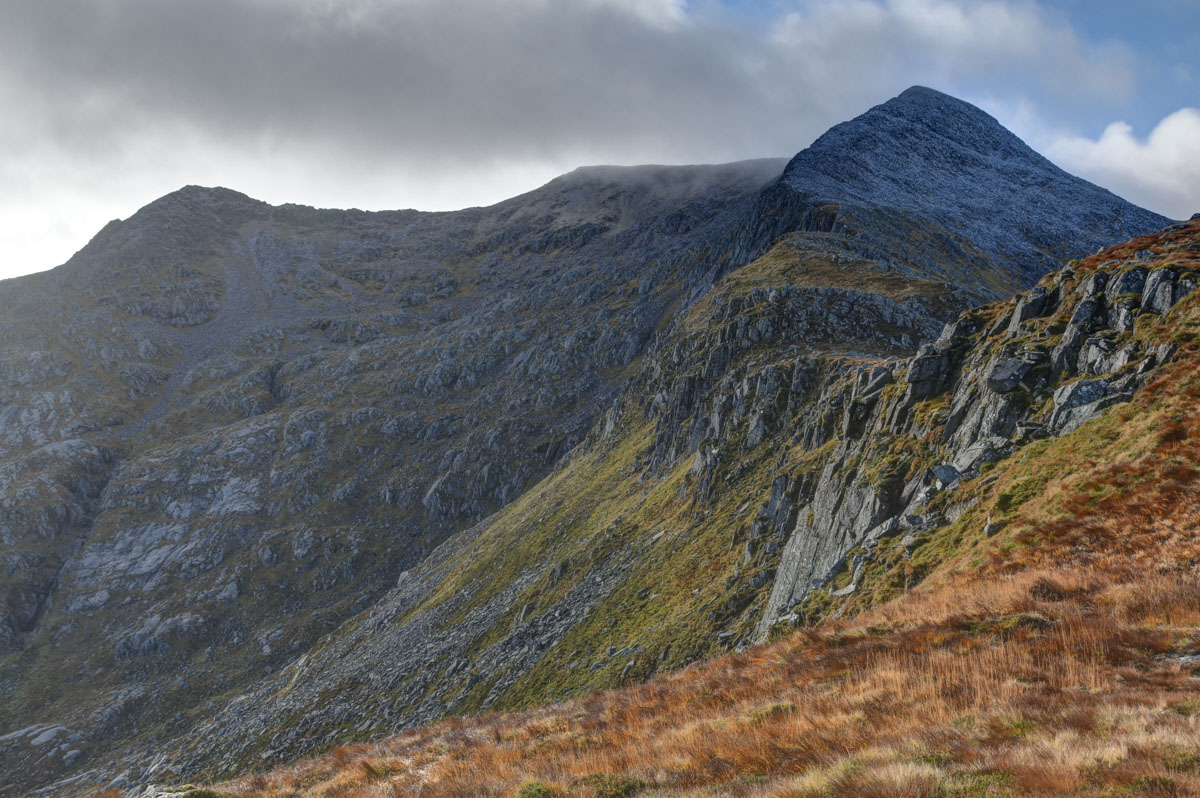 Plodded on, a wee dusting of snow and the rockier terrain meant a little more care and attention was required for the last pull. 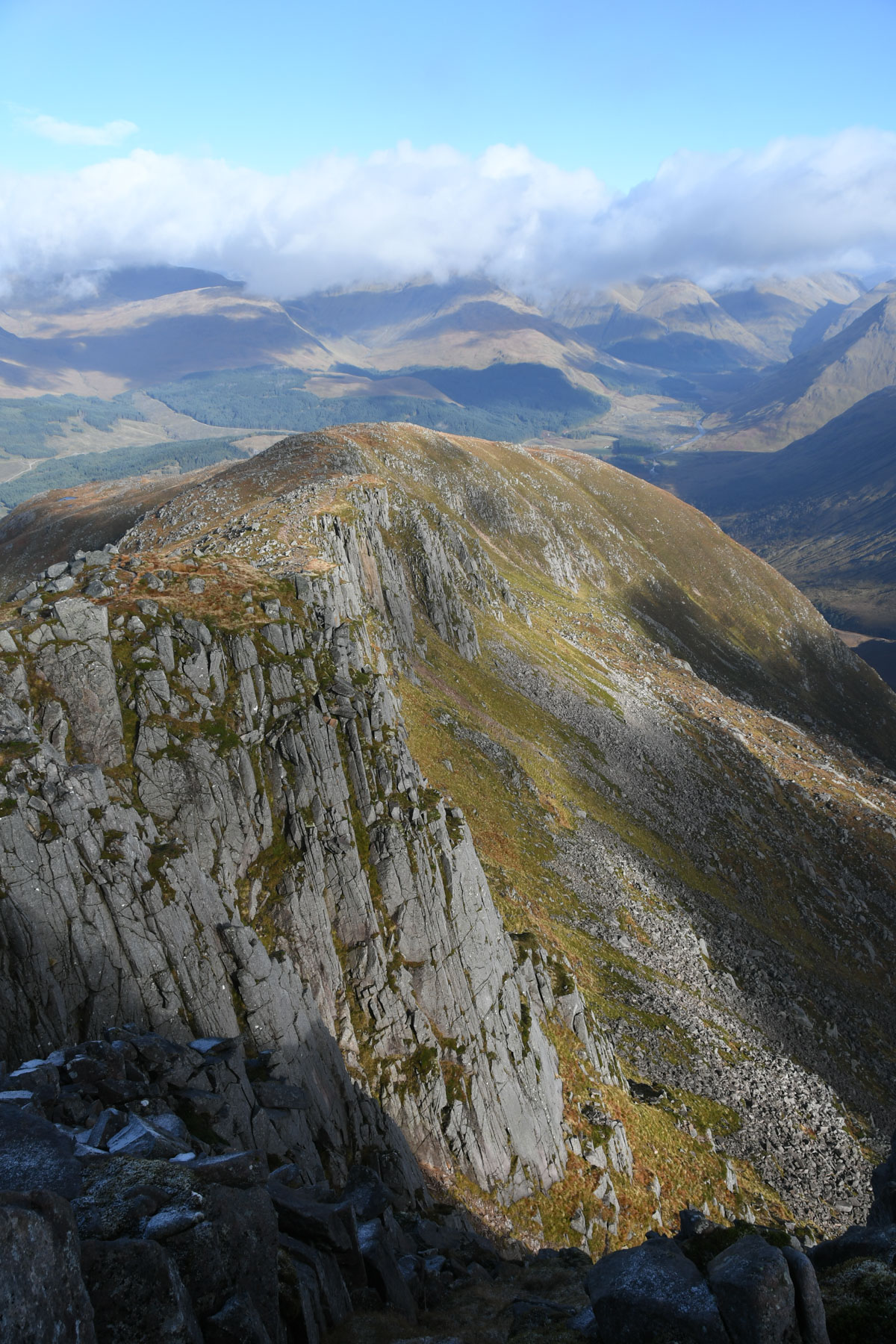 The mist was forming on the lee side of the summit: 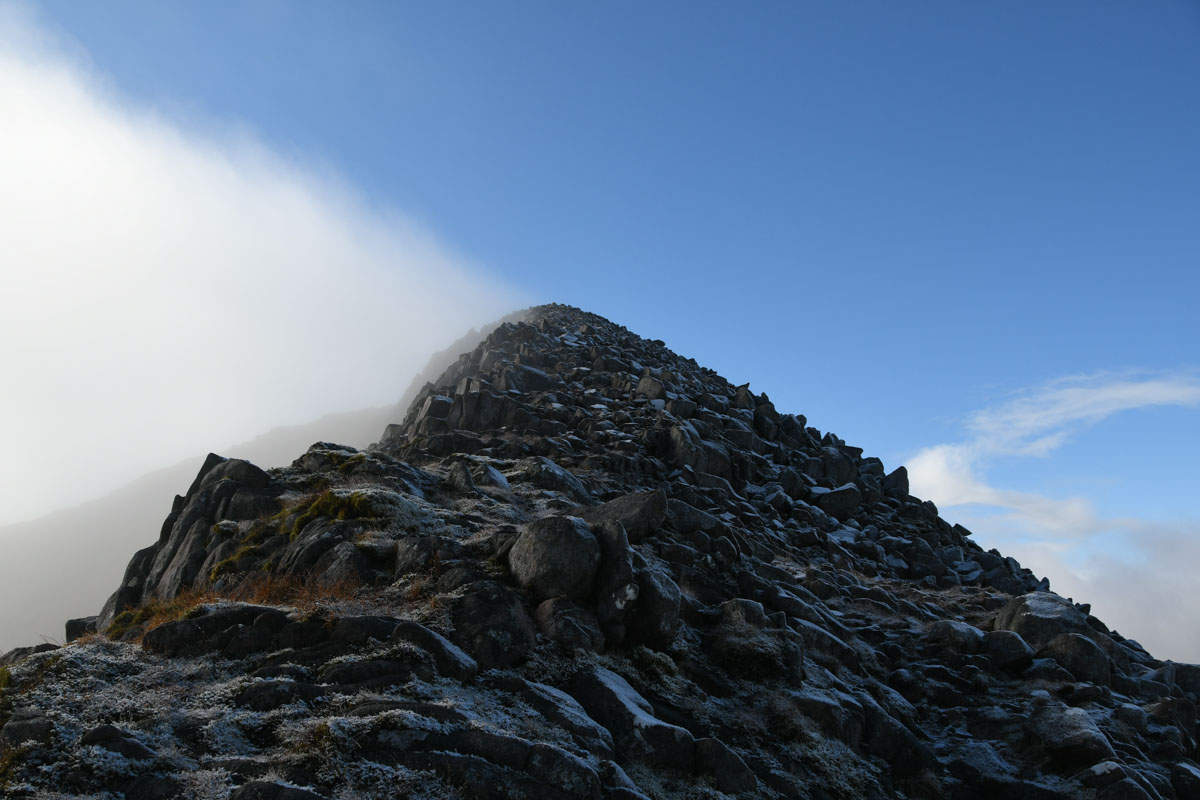 Summit achieved we pulled on all the insulation and had a long break. 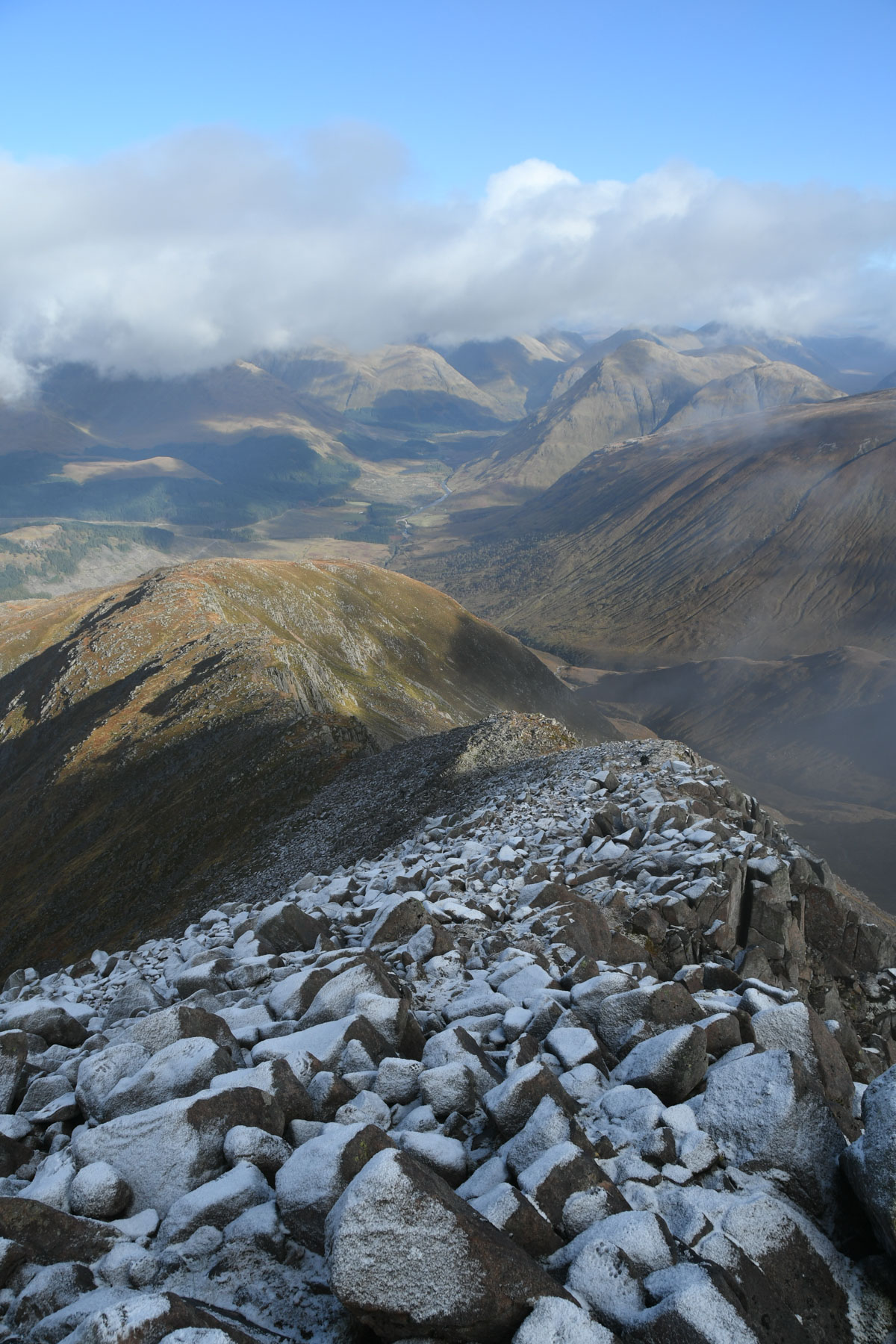 Unfortunately there was a lot more mist and cloud around than the forecast had led me to expect. Atmospheric perhaps, but I’d been hoping for some long views from what is a standout viewpoint. Next time perhaps. 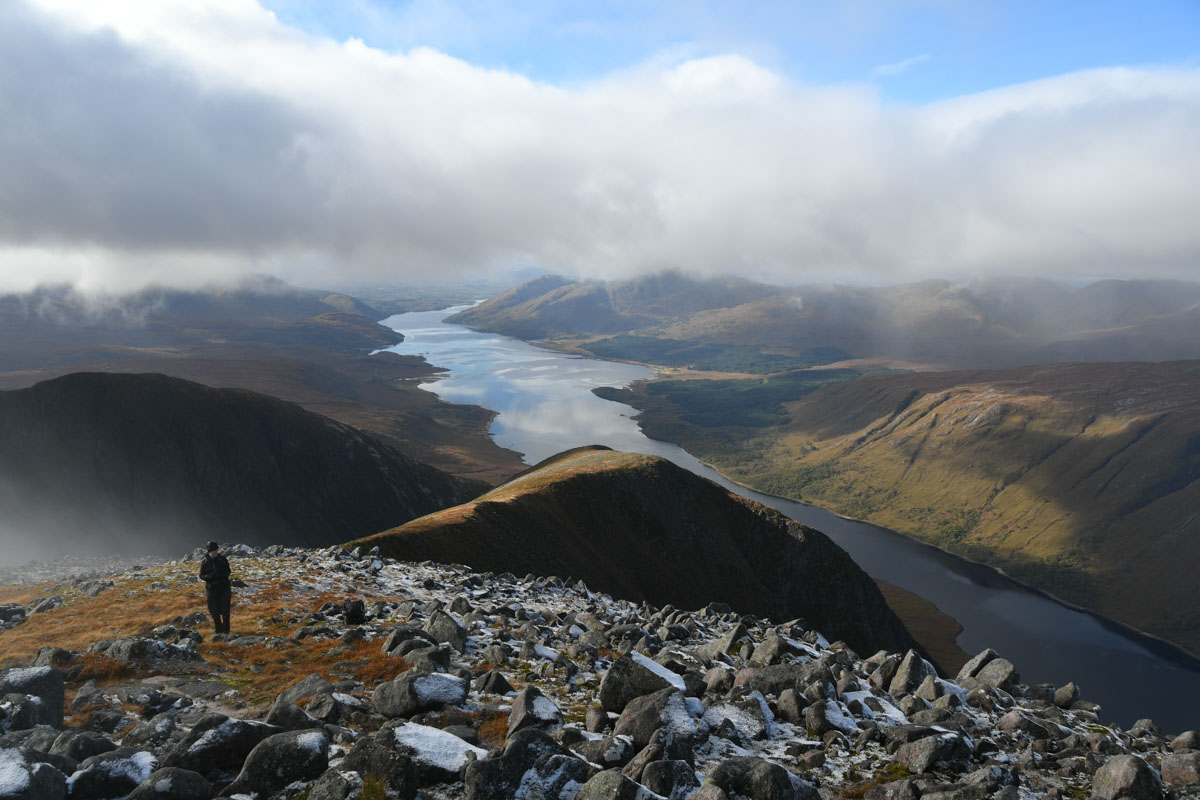 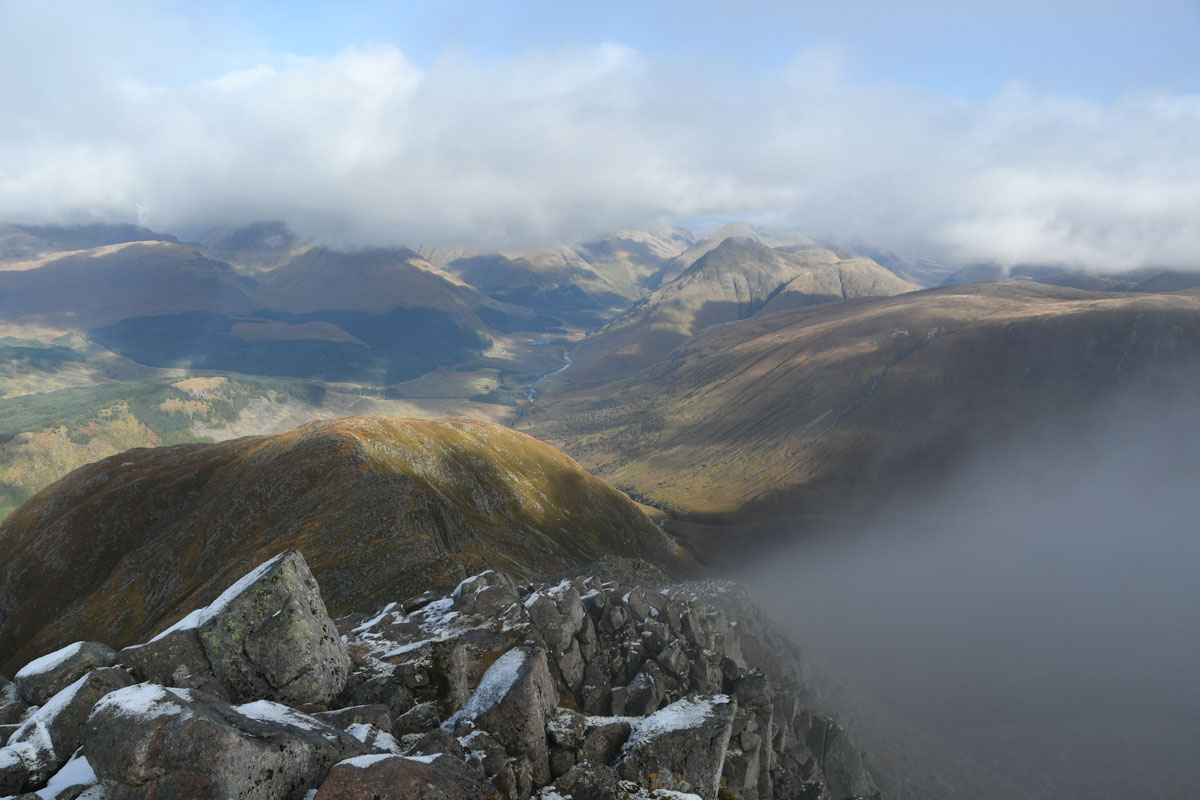 After about 40 minutes we decided to head on. Clocked 2 potential snug pitches near the summit (and very easy pitching on the 1068m summit to the SE) for future reference.

Carried on along the ridge to Stob Coire Dheirg: 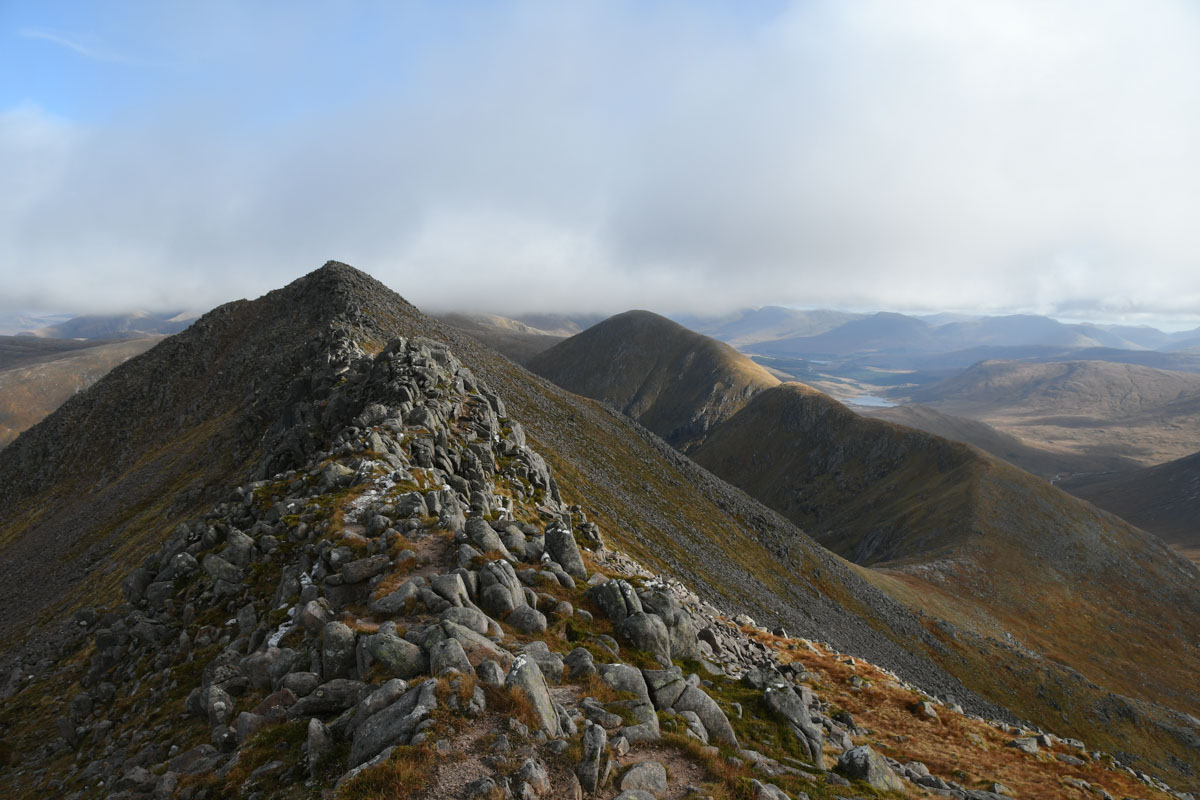 From Stob Coire Dheirg there’s a good view along the ridge to Glas Bheinn Mhor: 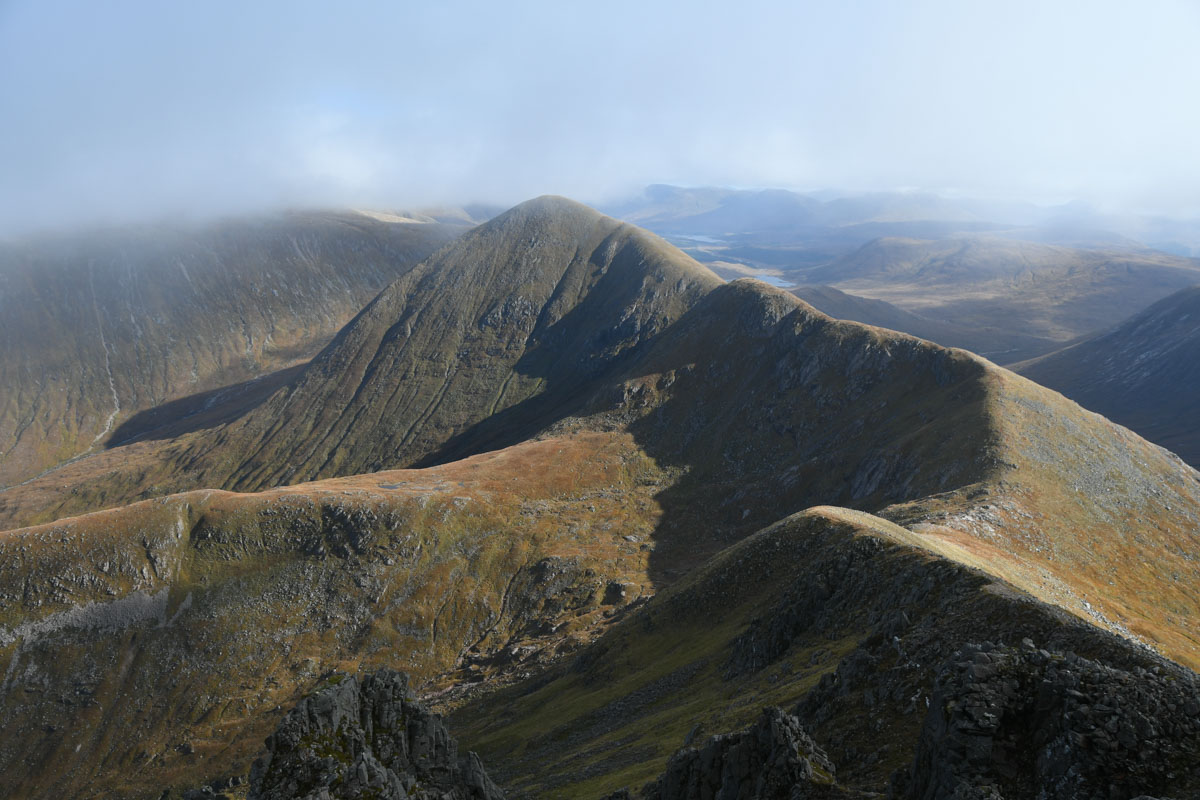 Ben Cruachan was only rarely visible to the south. Beinn nan Lus seemed only a stone’s throw away. 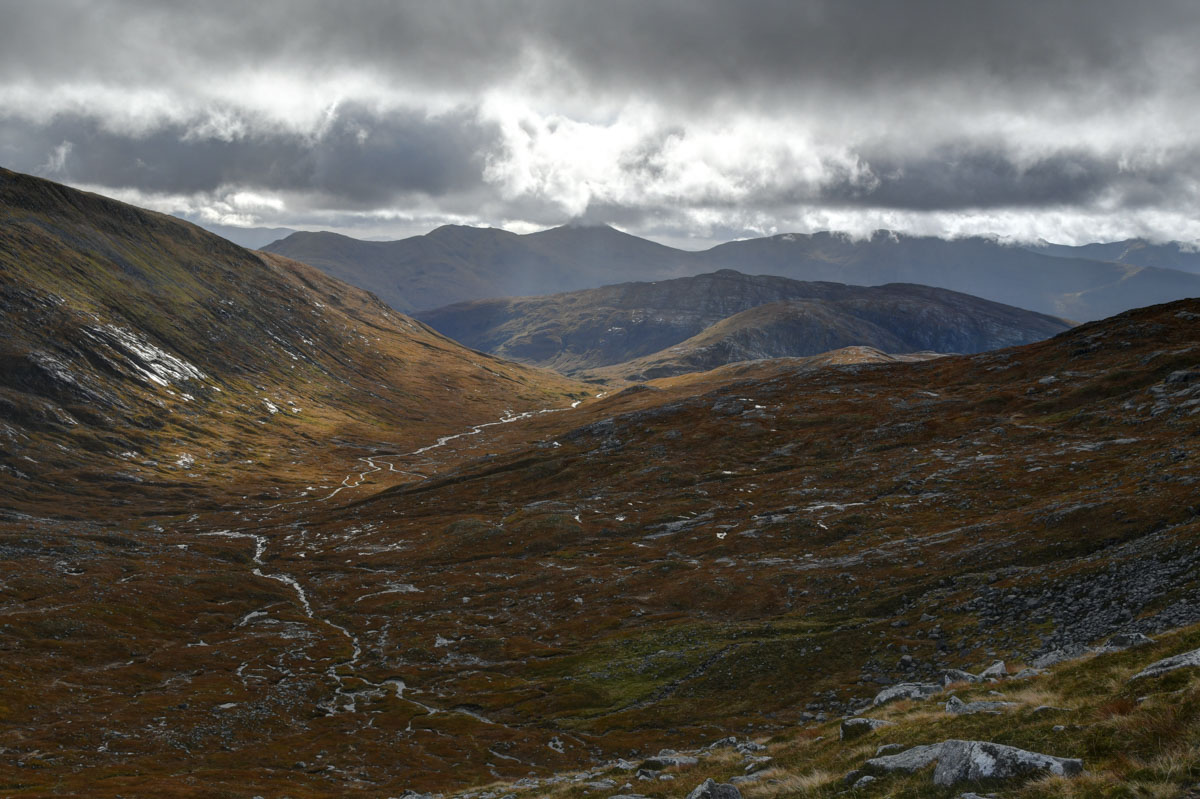 Dropped down to the 766m bealach, didn’t fancy the out and back to Beinn nan Aighenan this time. Ascended Meall nan Tri Tighearnan – nice view down the interesting ridge of Glas Bheinn Chaol. 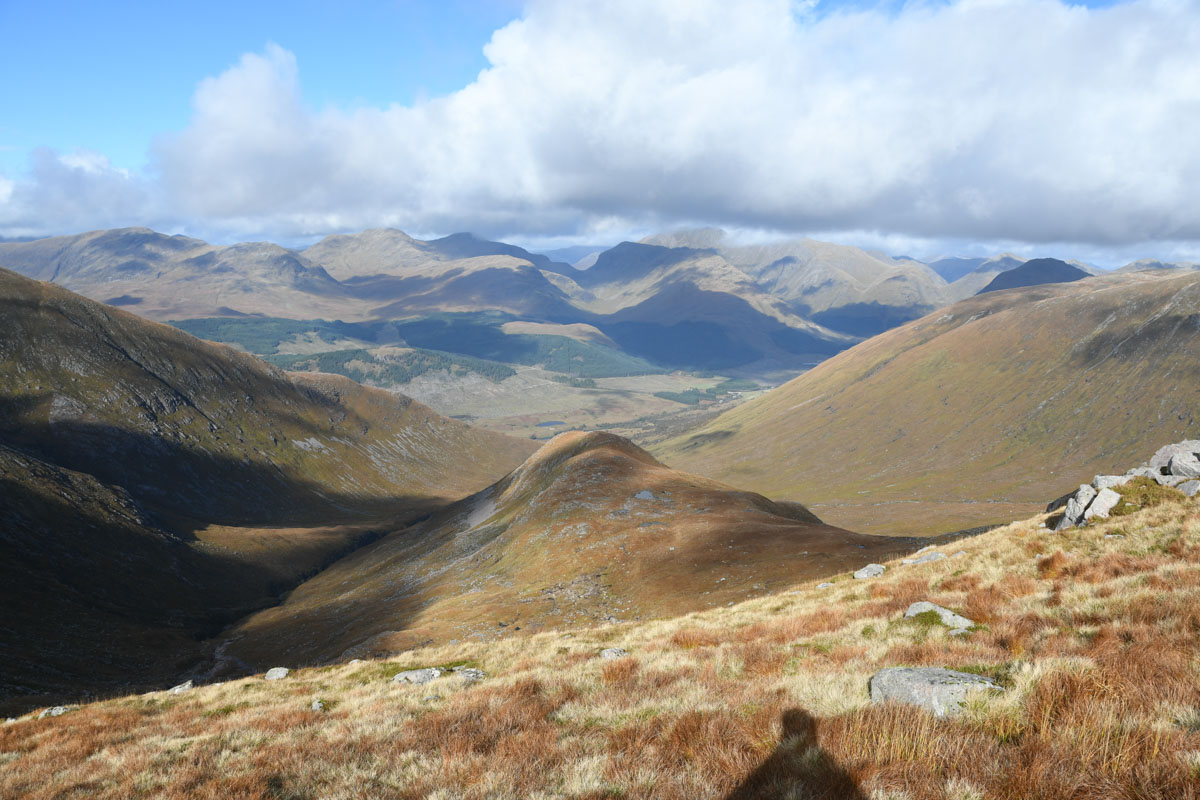 Back the way we had come Ben Starav had cleared a bit: 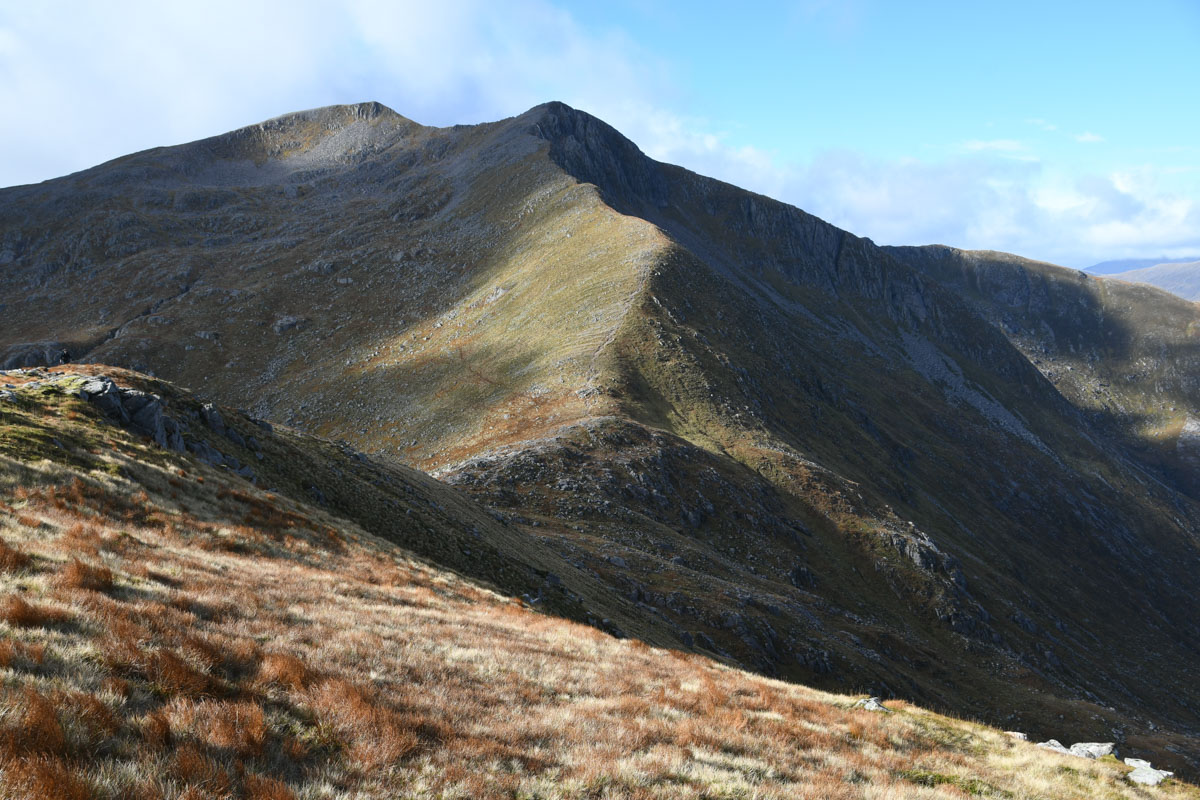 Carried on to Glas Bheinn Mhor, clouds came and went a little. Not as good a day as the forecast had suggested, but decent nonetheless. 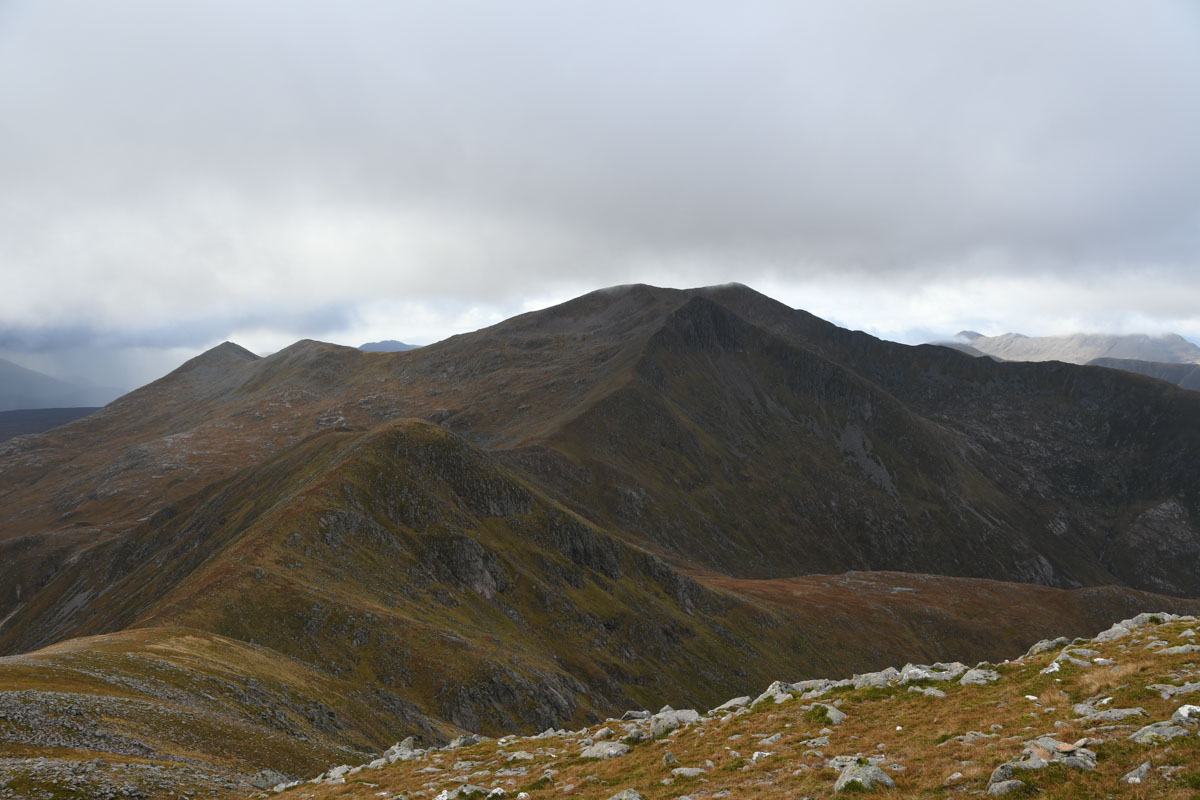 Loch Dochard, Loch Tulla and the Bridge of Orchy hills: 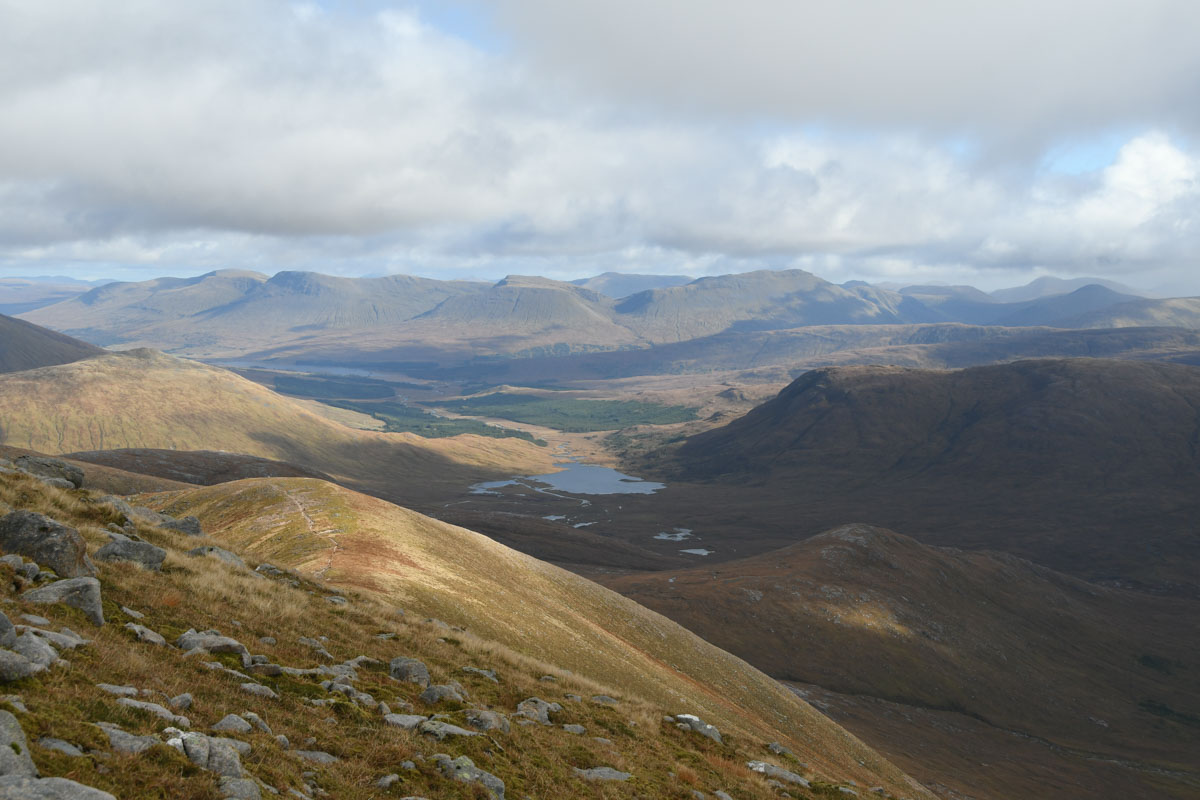 The descent from Glas Bheinn Mhor weaves its way through little crags to drop to the bealach with Stob Coir nan Albannaich. We turned left down the glen back to the car. 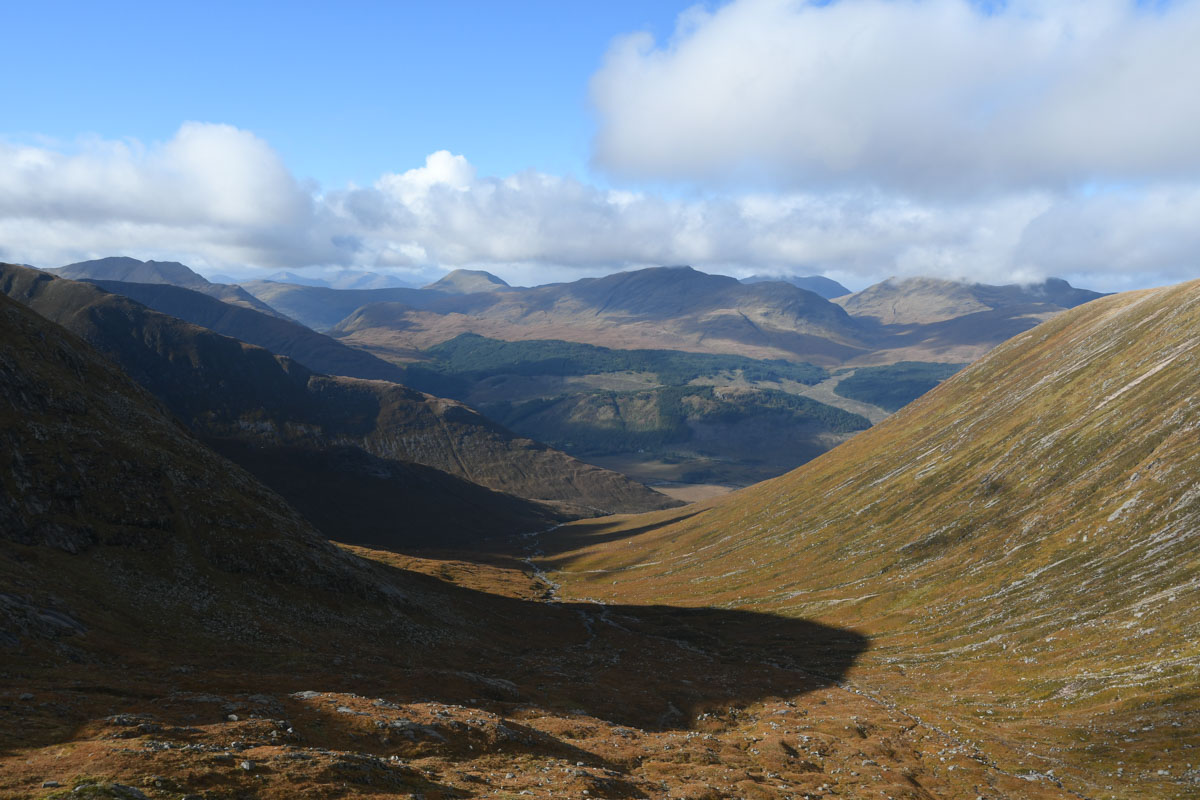 The glen path is OK, a little patchy and, typical of the munro routes in the area, a bit gloopy in parts. After a while we turned the corner back into Glen Etive where the sun was shining: 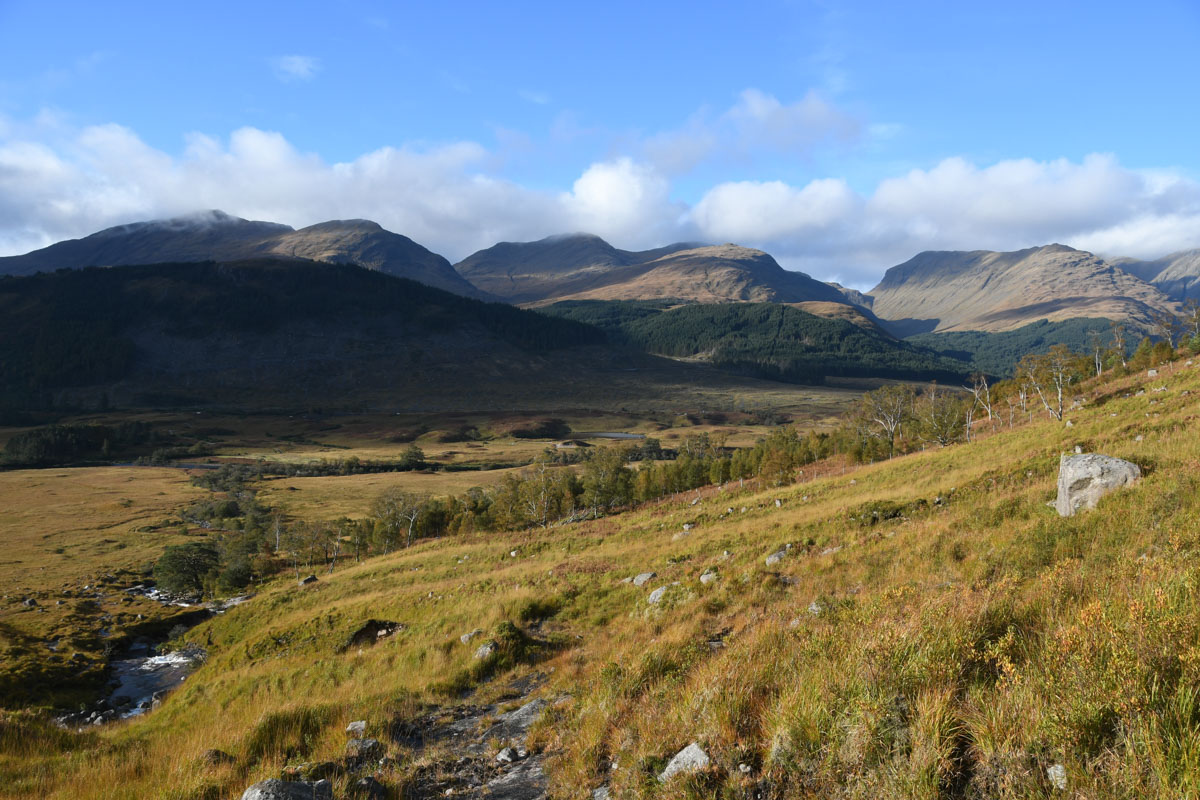 Took the very gloopy direct route to Coileitir and then back to the bridge: 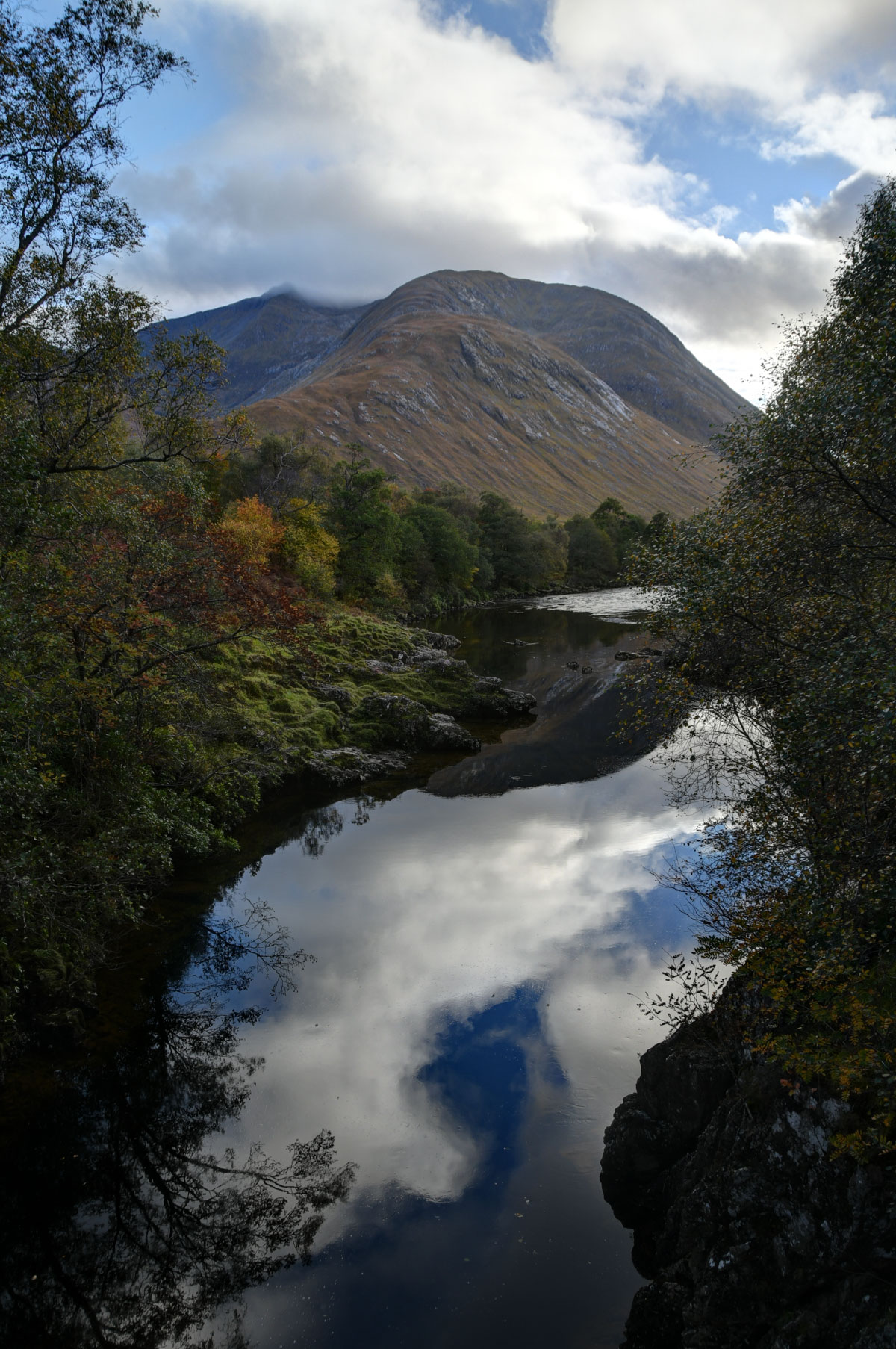 Good to finally revisit these hills. For some reason they have eluded us for a while. Not quite the day I was wanting for Starav, but I think that really needs a summit camp to properly do it justice. Now on the radar.