Saturday had been extremely soggy, we hadn’t bothered getting out. Sunday looked like an improving day with a sunny afternoon.

Didn’t rush – headed out of the house at 1100 and drove north. Decided to revisit Ben Venue, not too long a drive from Edinburgh.

Grey when we left Edinburgh the skies were getting bluer as we drove through the Trossachs.

A great reflection in Loch Achray. 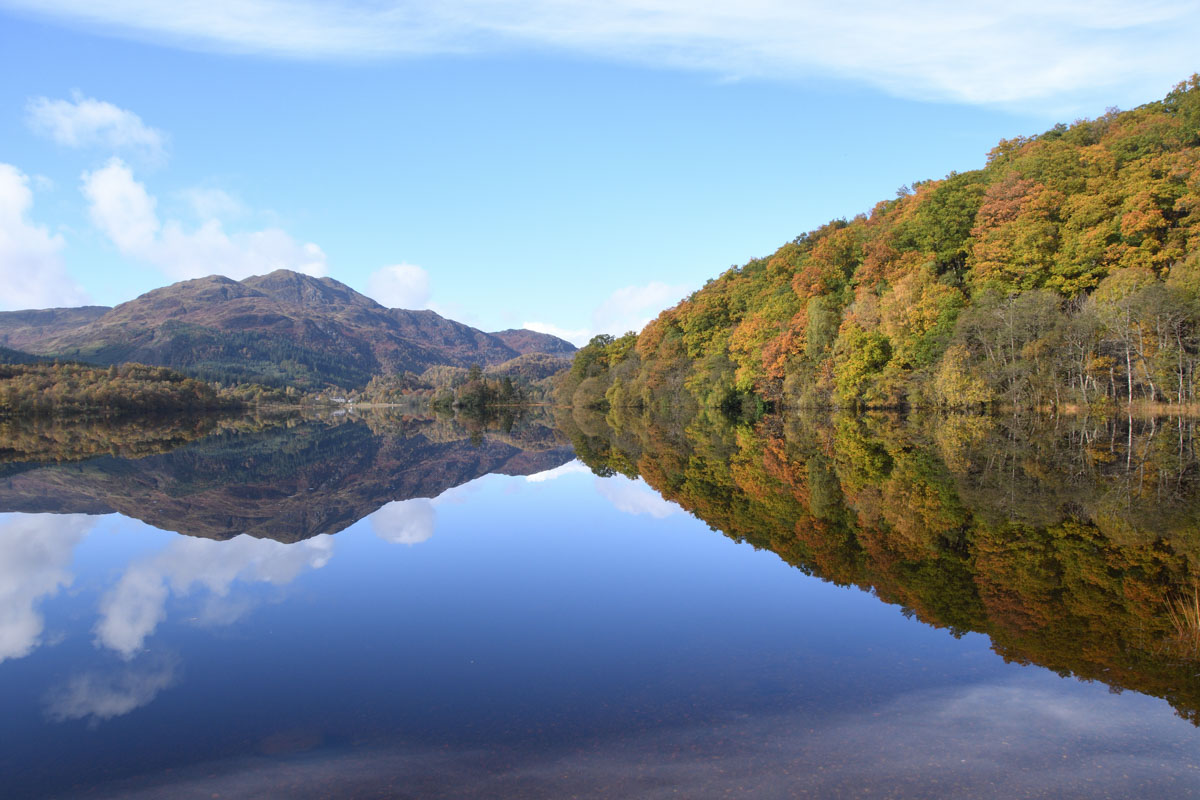 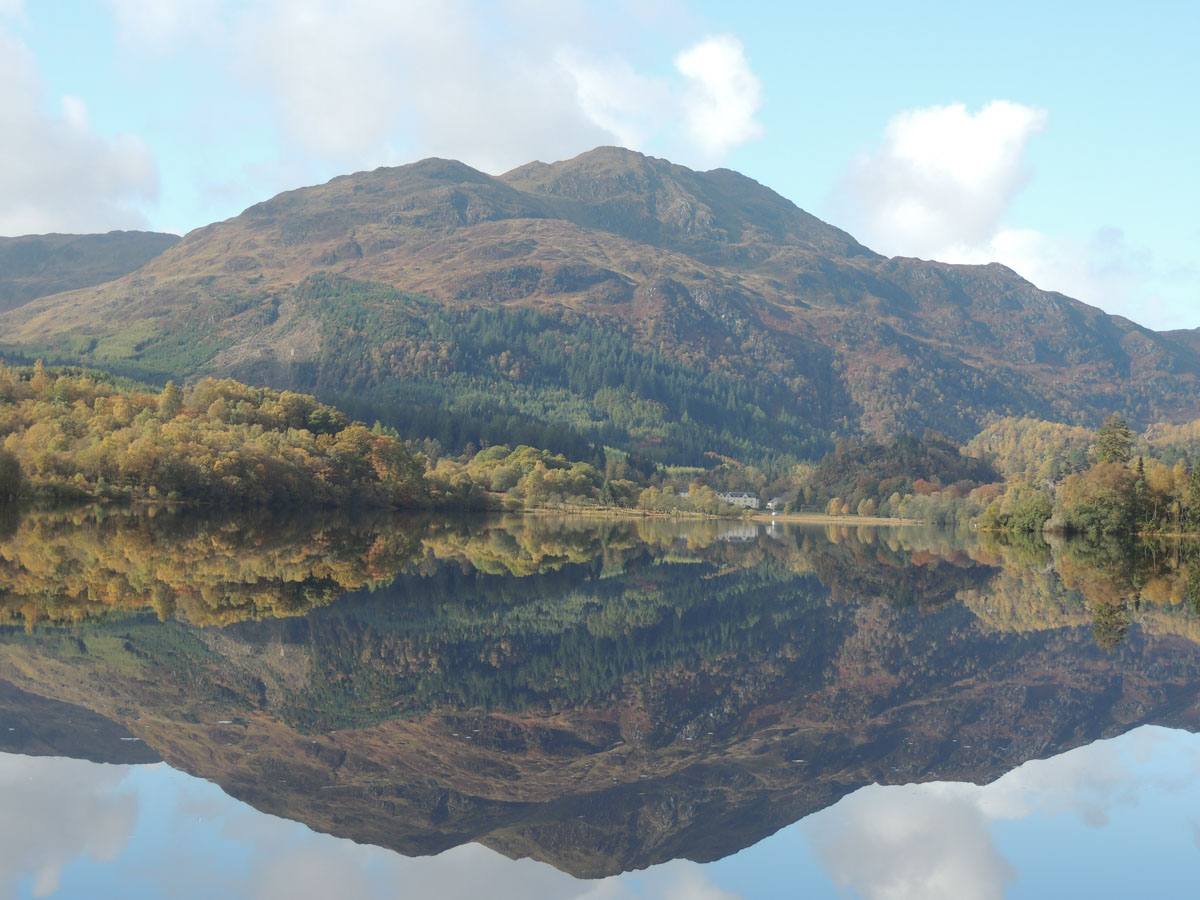 Parked up in the Ben Venue car park, parking machine out of order. The path seemed to head out in a different direction than I remembered. It transpire the initial route of the waymarked path has changed, heading west to the Loch Katrine dam access road then across Achray Water on a footbridge before ascending a steep, well built path to the track into Gleann Riabhach.

Ben A’an is rather prominent at the start of the walk: 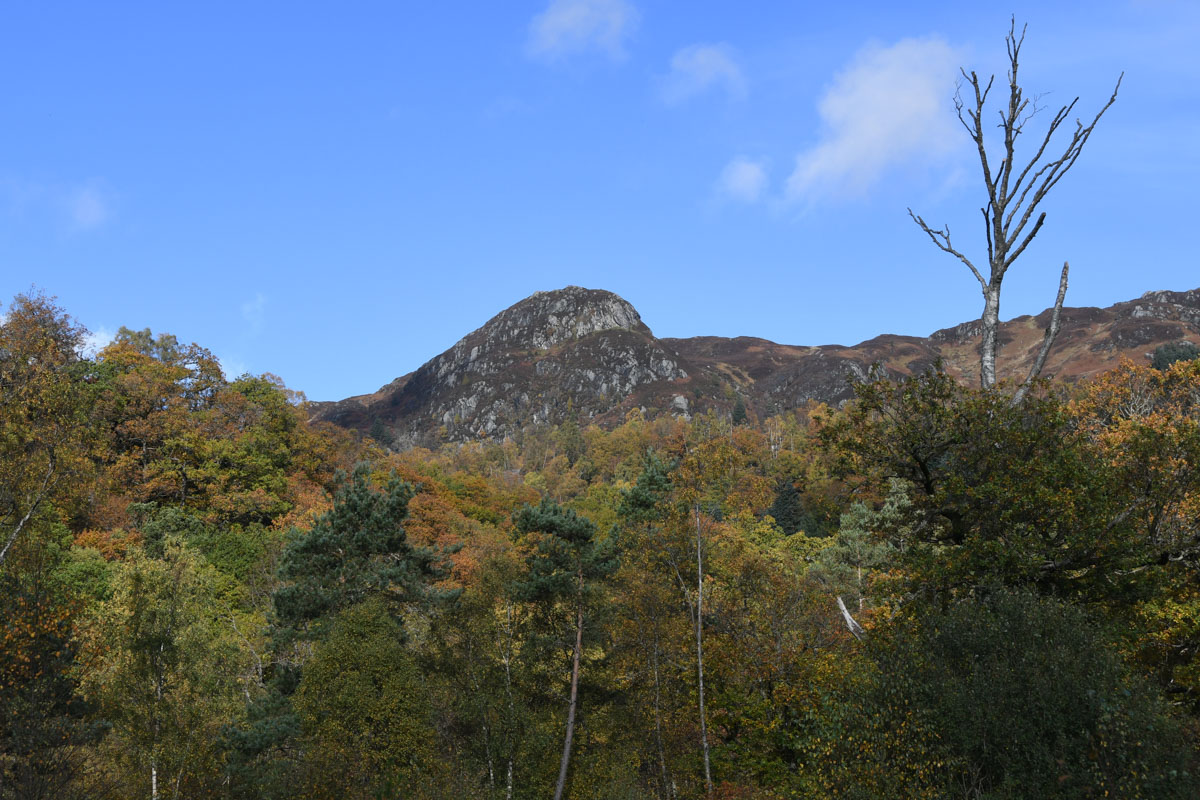 Beautiful colours at this time of year. 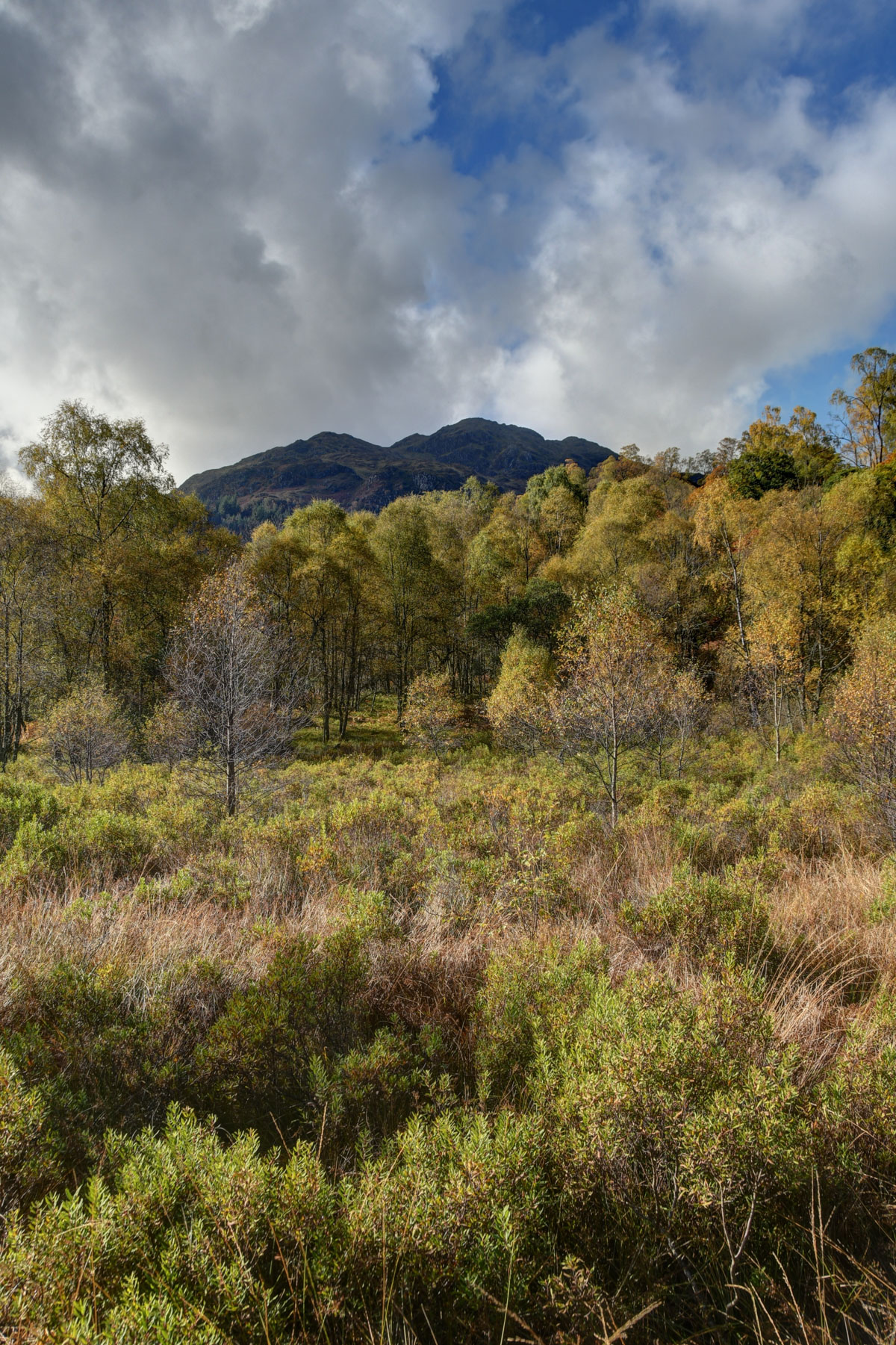 The walk out through the harvested forestry isn’t the most inspiring environment, but the path is excellent. Had a good view of a Great Spotted Woodpecker on the dead wood on the way up.

Last time we were here we avoided the bog between the forestry and the ridge by ascending NNW direct to the ridge. Now there’s a good path all the way, so we carried on along the path. 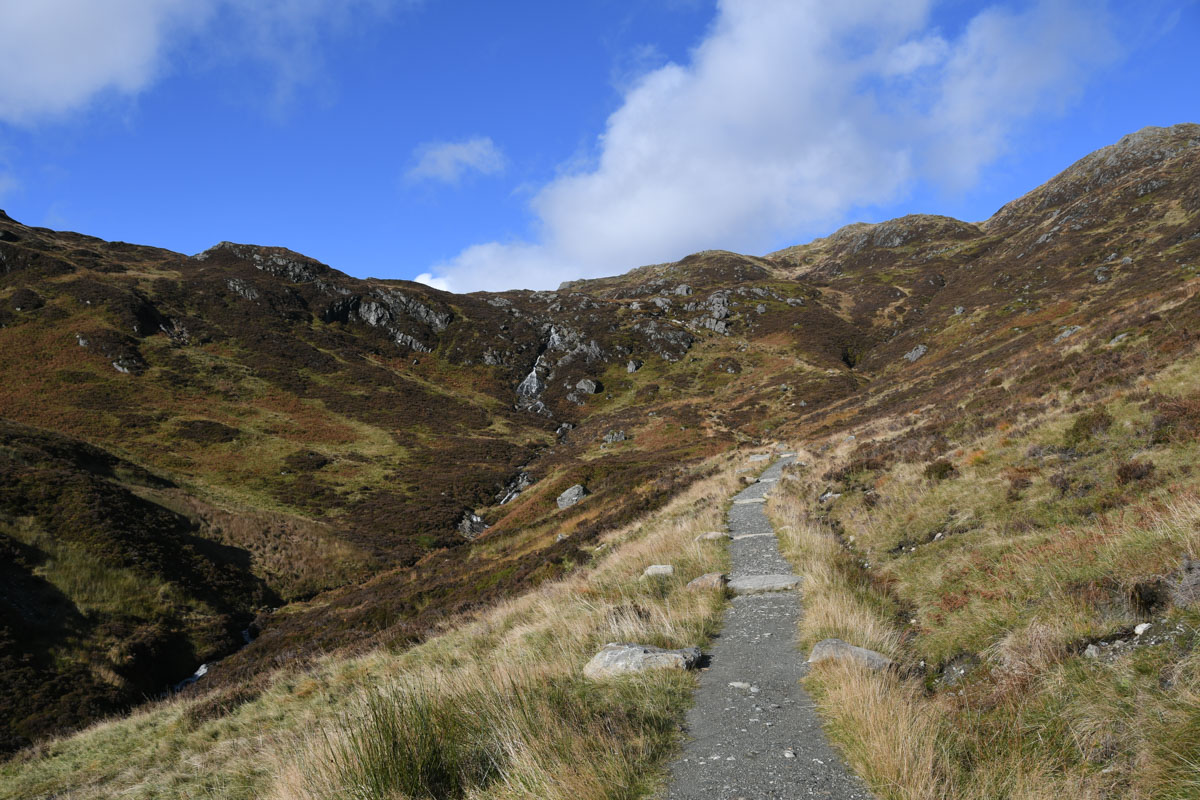 I’m not sure the caterpillar appreciated the path as much as we did. 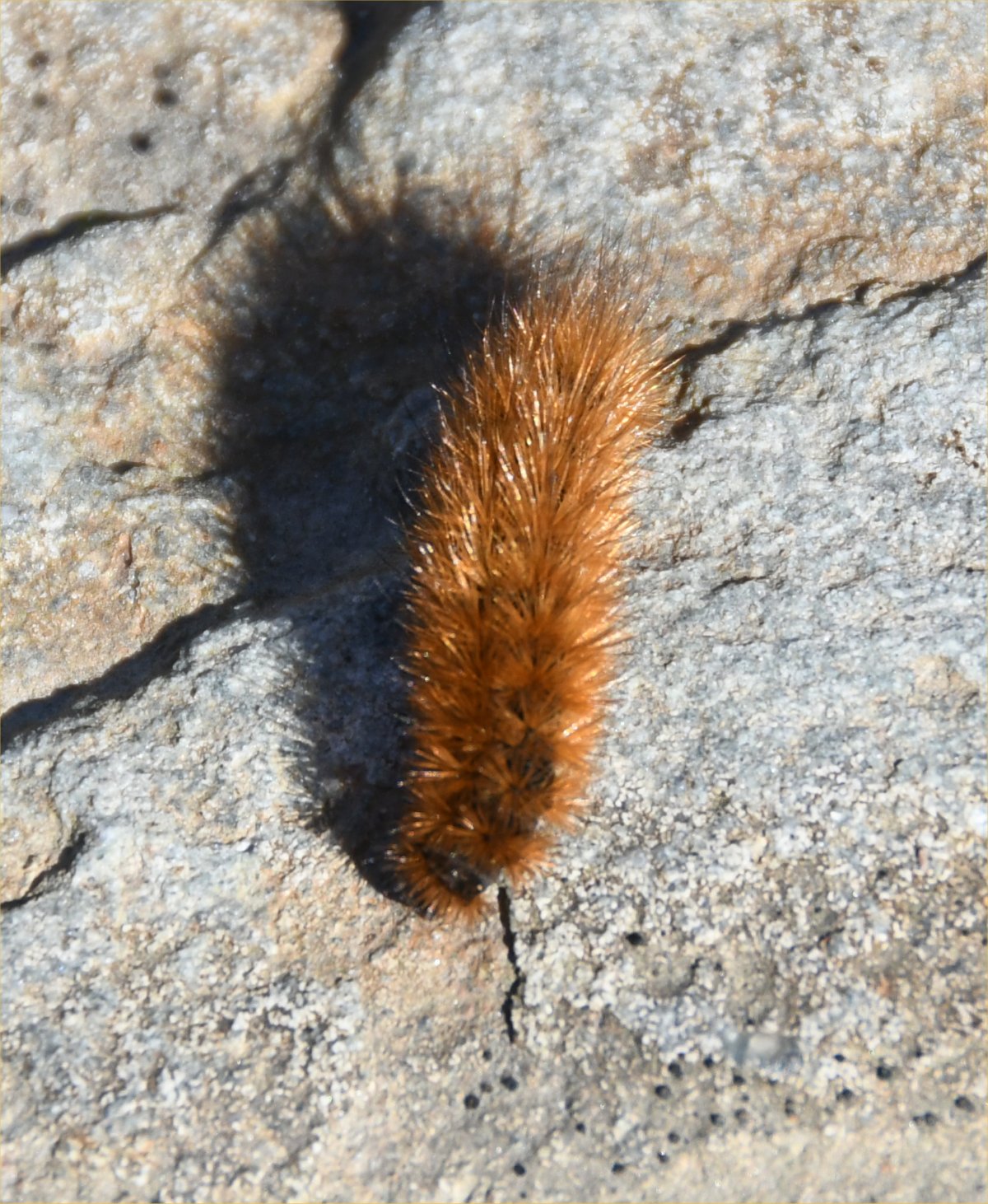 View back down the path: 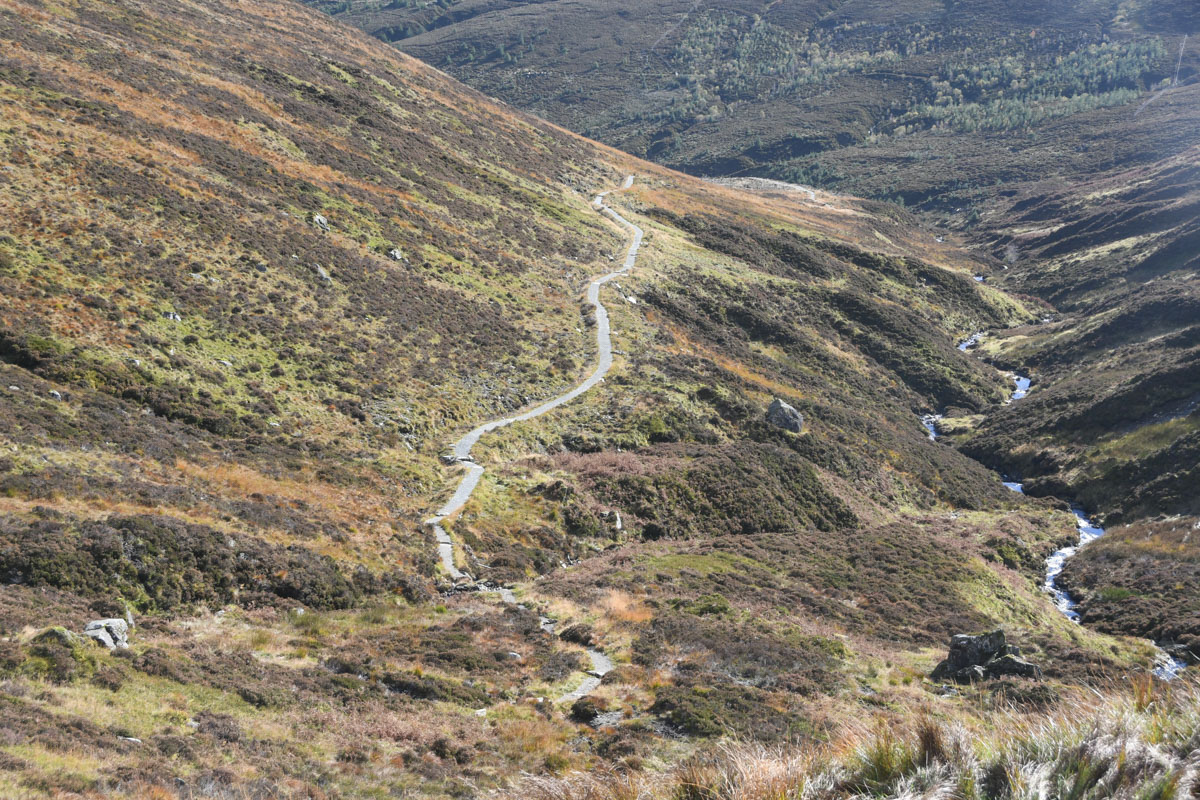 Doesn’t take long to get to the bealach between Creag a Bhealaich and Ben Venue – headed a bit off path, had a seat and ate some lunch.

Nice view north and west towards Arrochar and the Crianlarich hills, although a little cloudier that way than expected. 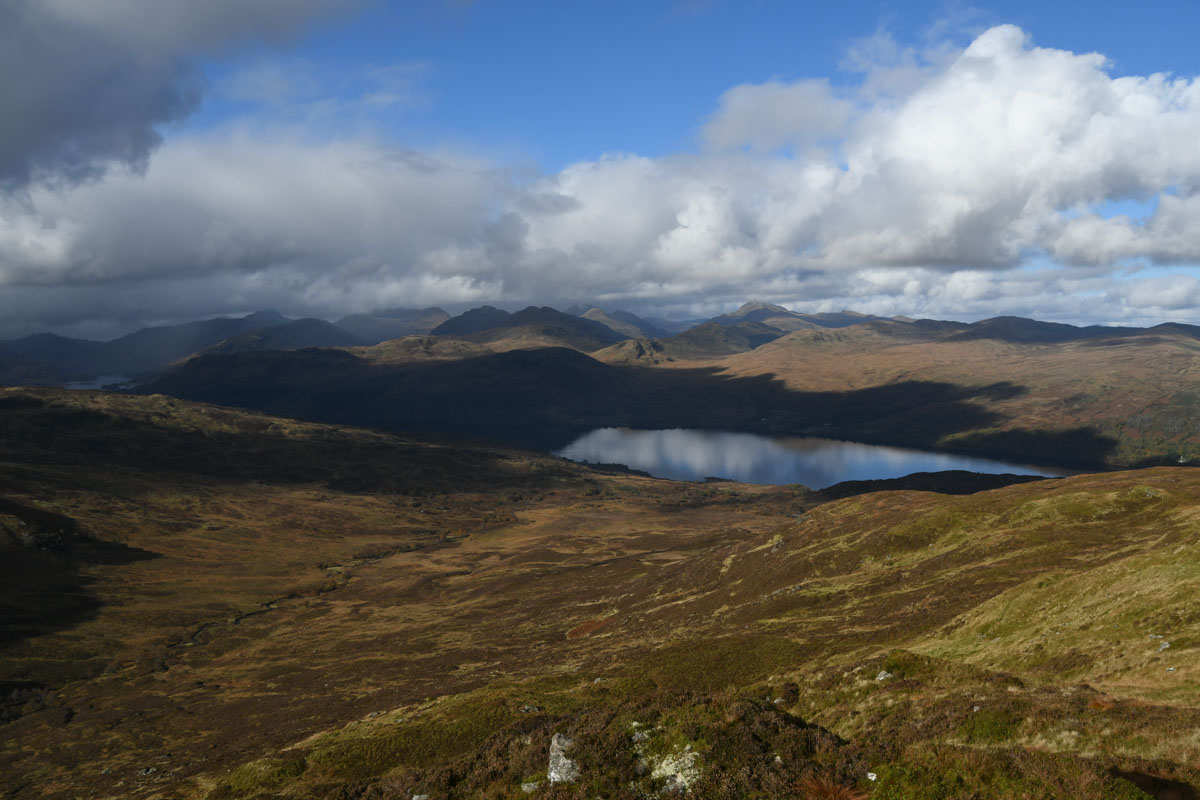 The Loch Katrine tourist boats were still running below. 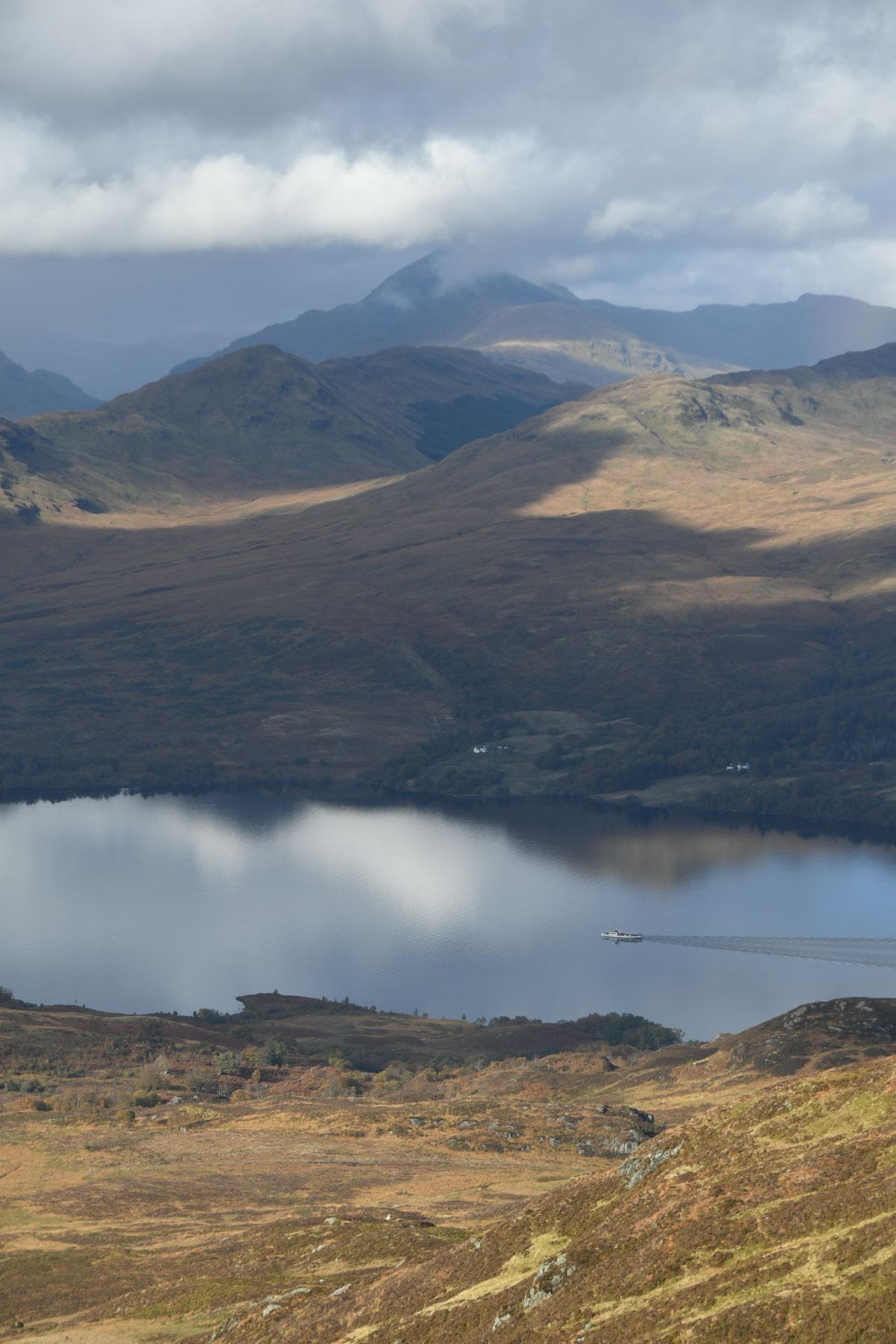 Headed on up to the summit, the last of the other walkers were heading down and we had the place to ourselves.

Well, almost to ourselves……a Red Admiral decided my head was a nice place to land before decanting on to a nearby rock: 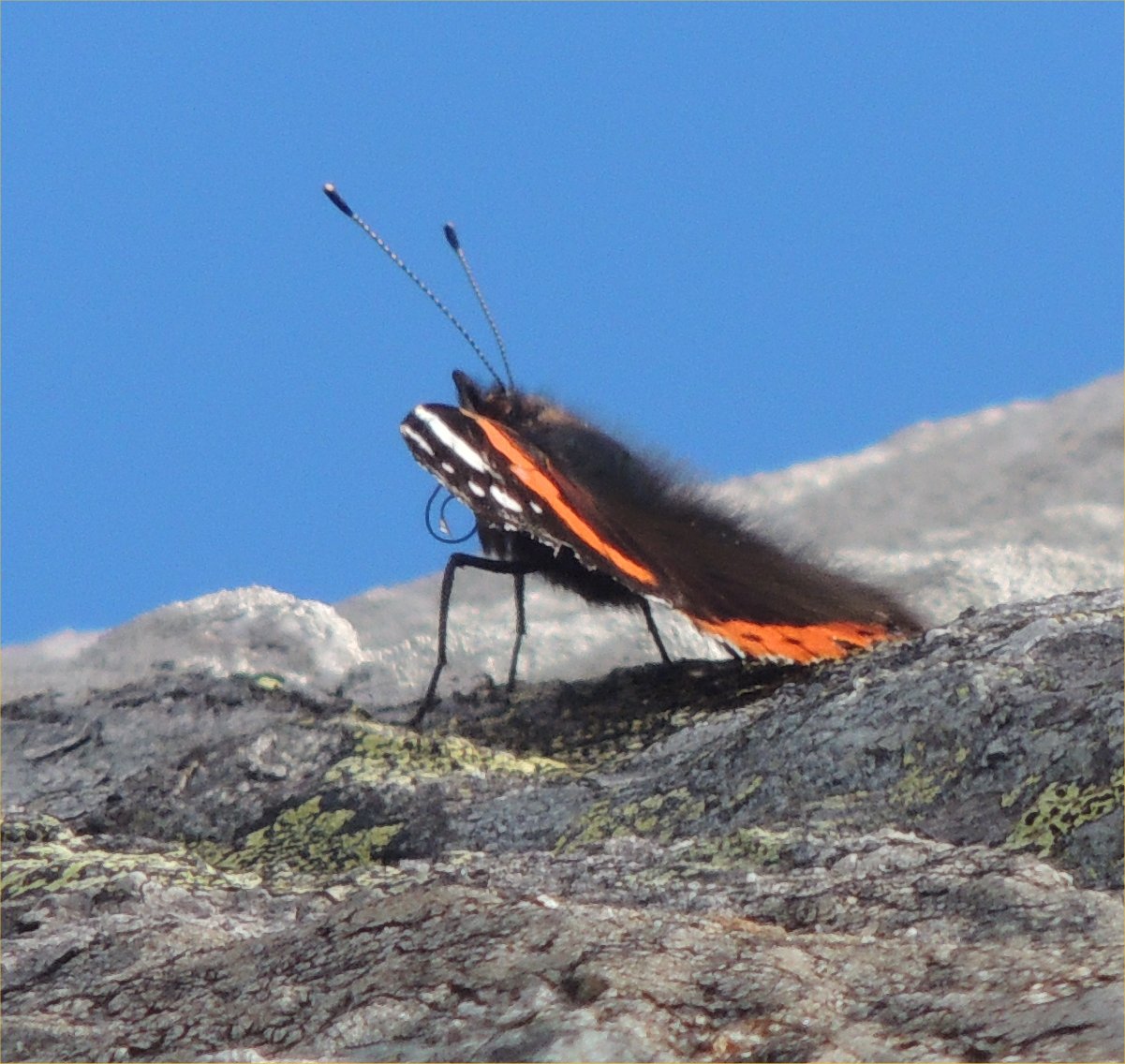 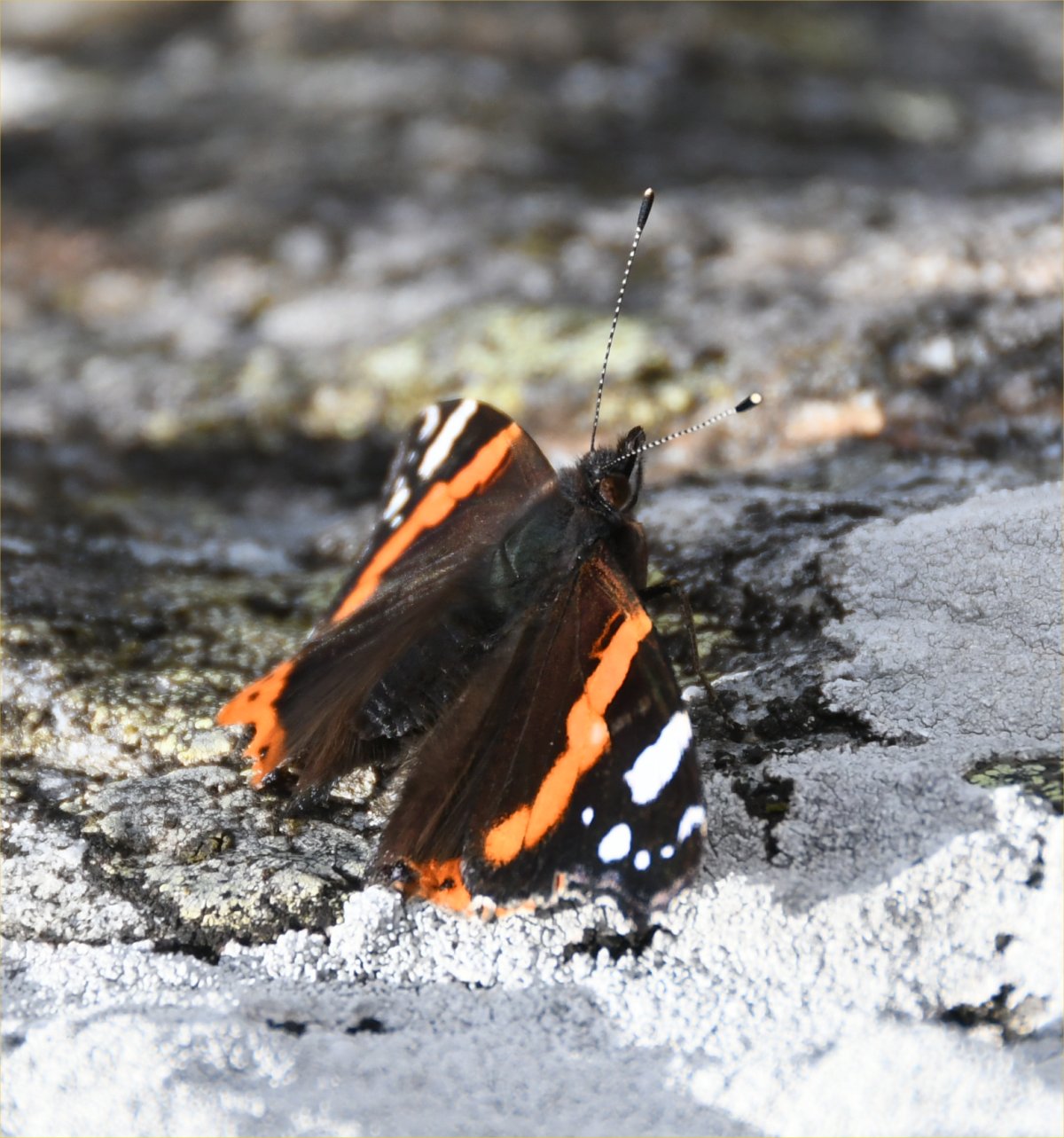 Up to the summit, the hills across Loch Katrine were clearing – we’ve had quite a few walking days over this gnarly looking terrain: 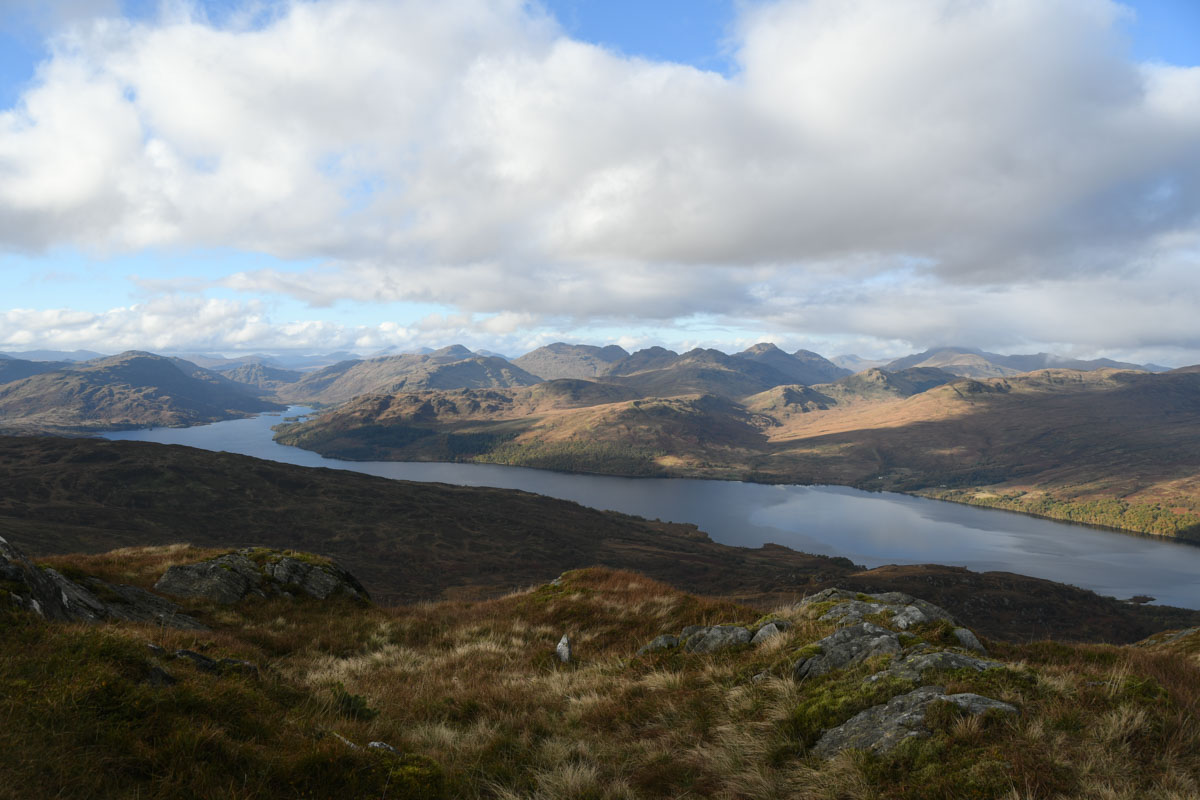 Quite clear air – the distinctive cliff of Stob Coire Sputan Dearg (Ben Macdui) was visible 105km to the NNE. 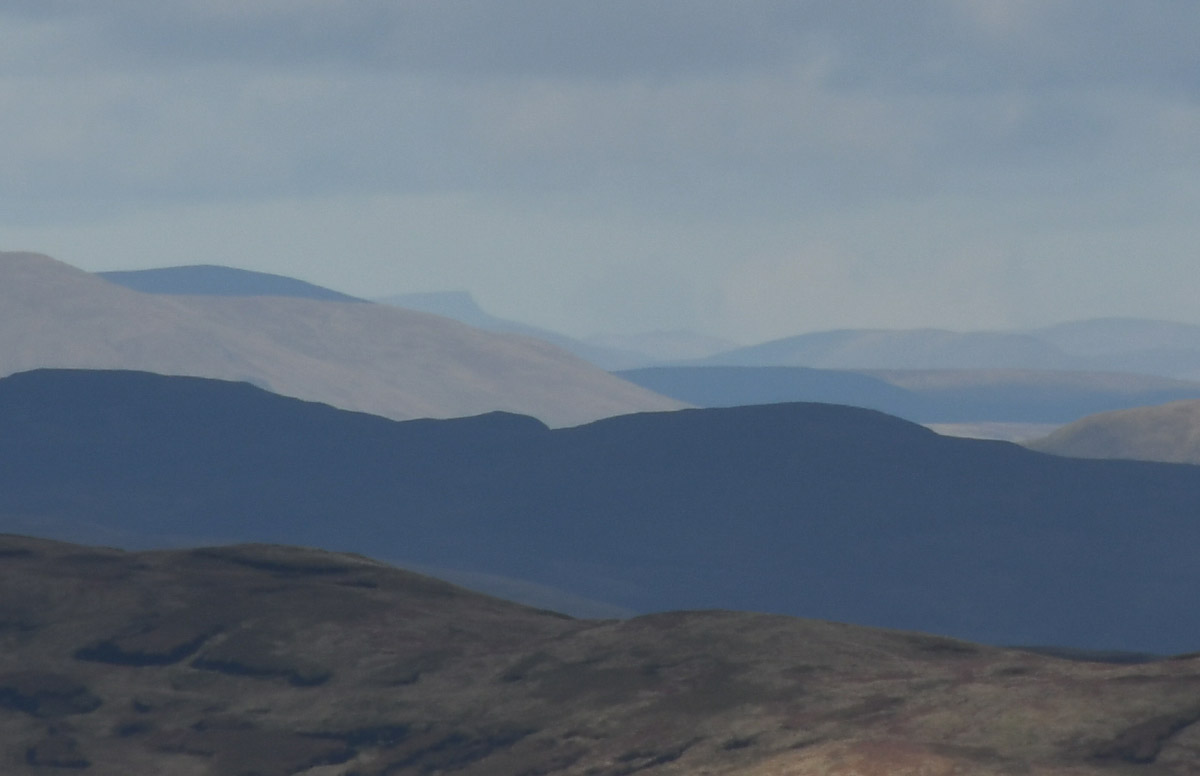 Arran was visible in profile to the SW (and faintly to the south we could see The Merrick): 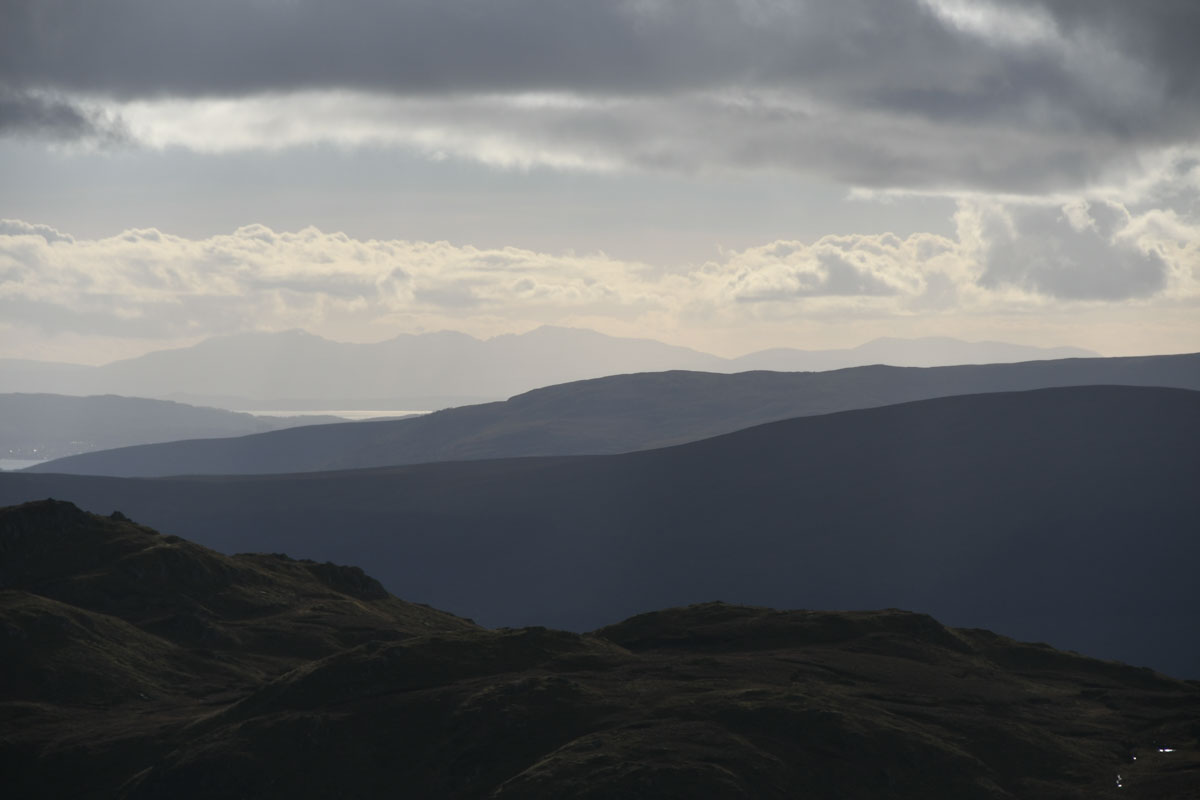 Had a wander over to the trig point summit – nice views of Lochs Achray and Vennachar on the way. 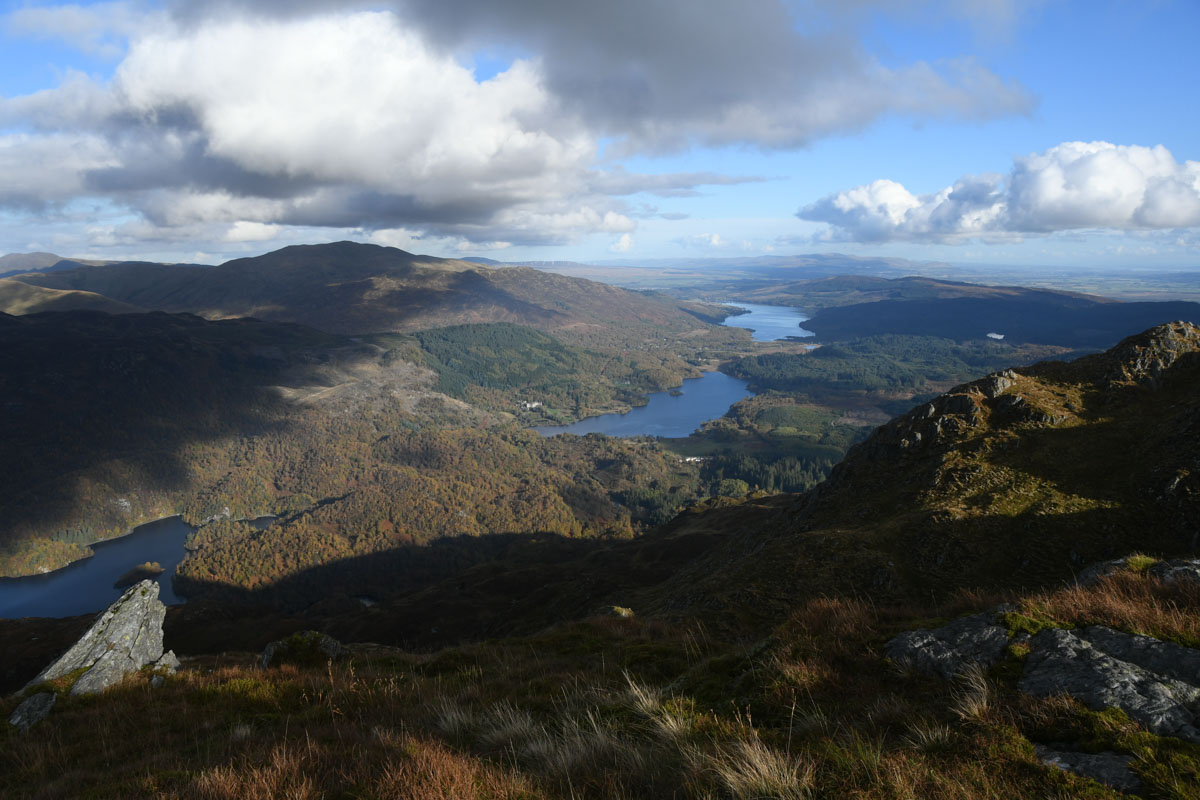 Over on the other summit we were entertained by a group of ravens flying around. Sometimes shining silver with the sun on their backs they were chasing this way and that. They came to inspect the summit as we hung around. 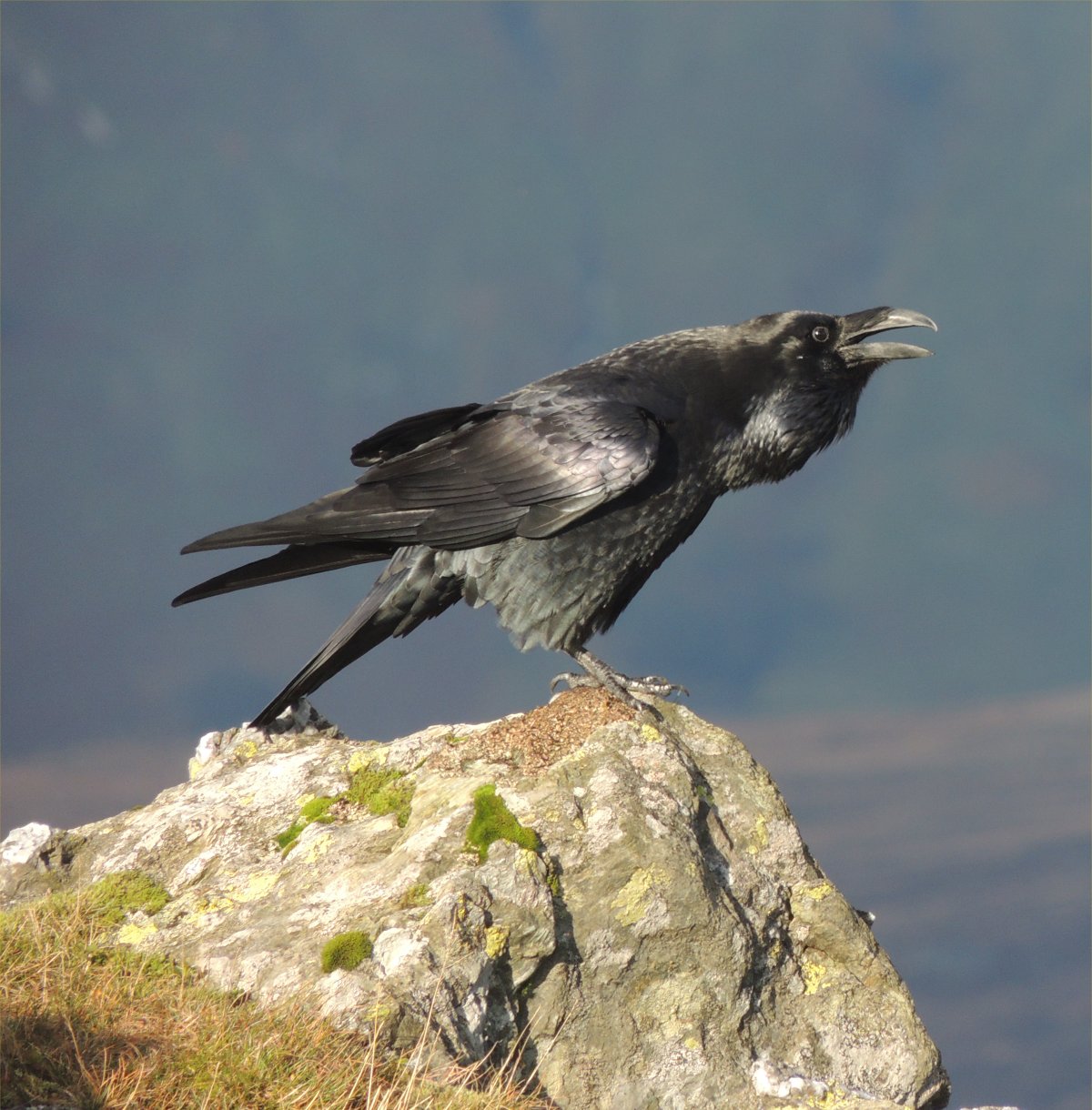 A hopeful Hoody was hanging around the sidelines too. 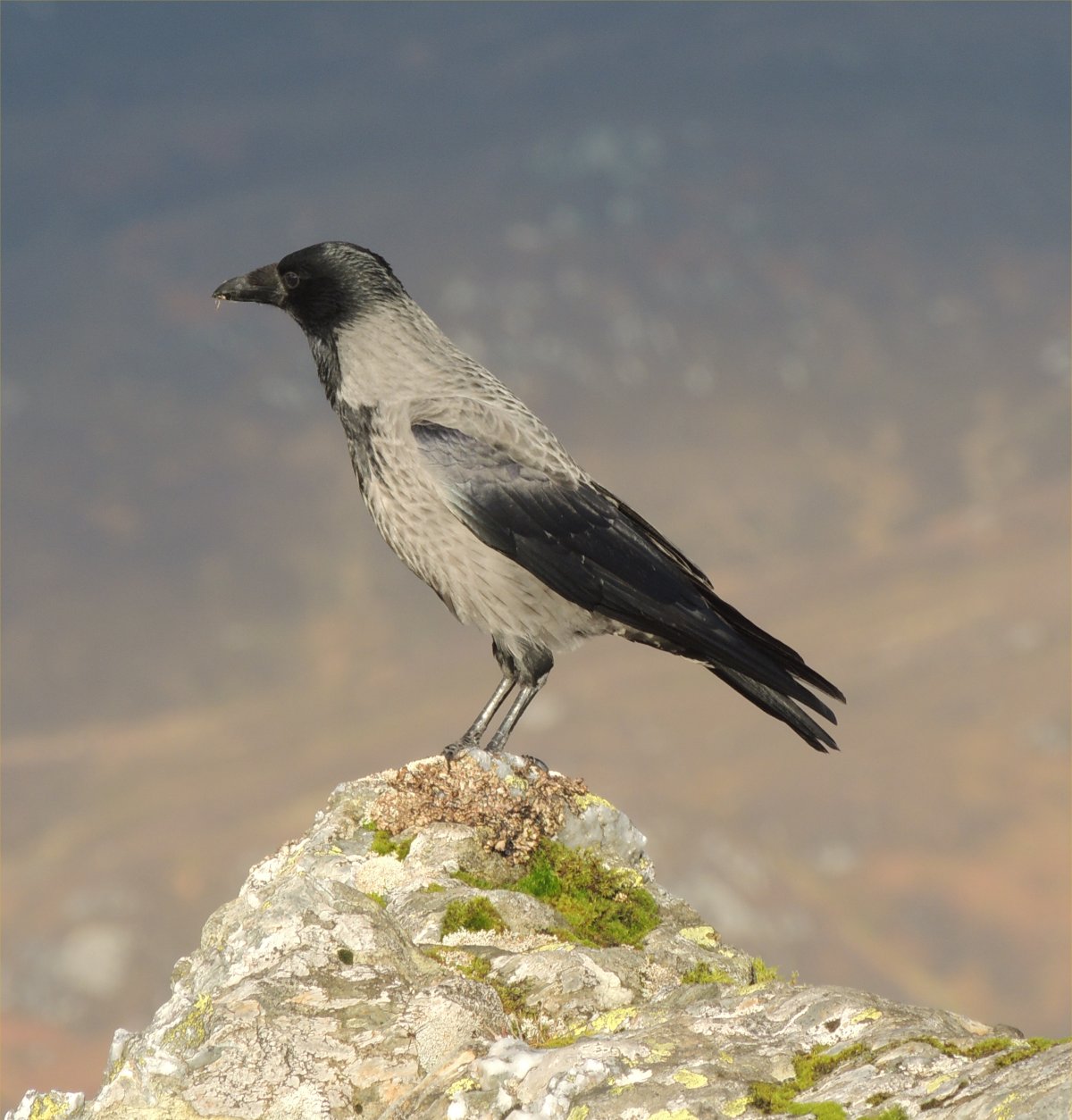 Headed back across to the main summit, with a last look at the view. 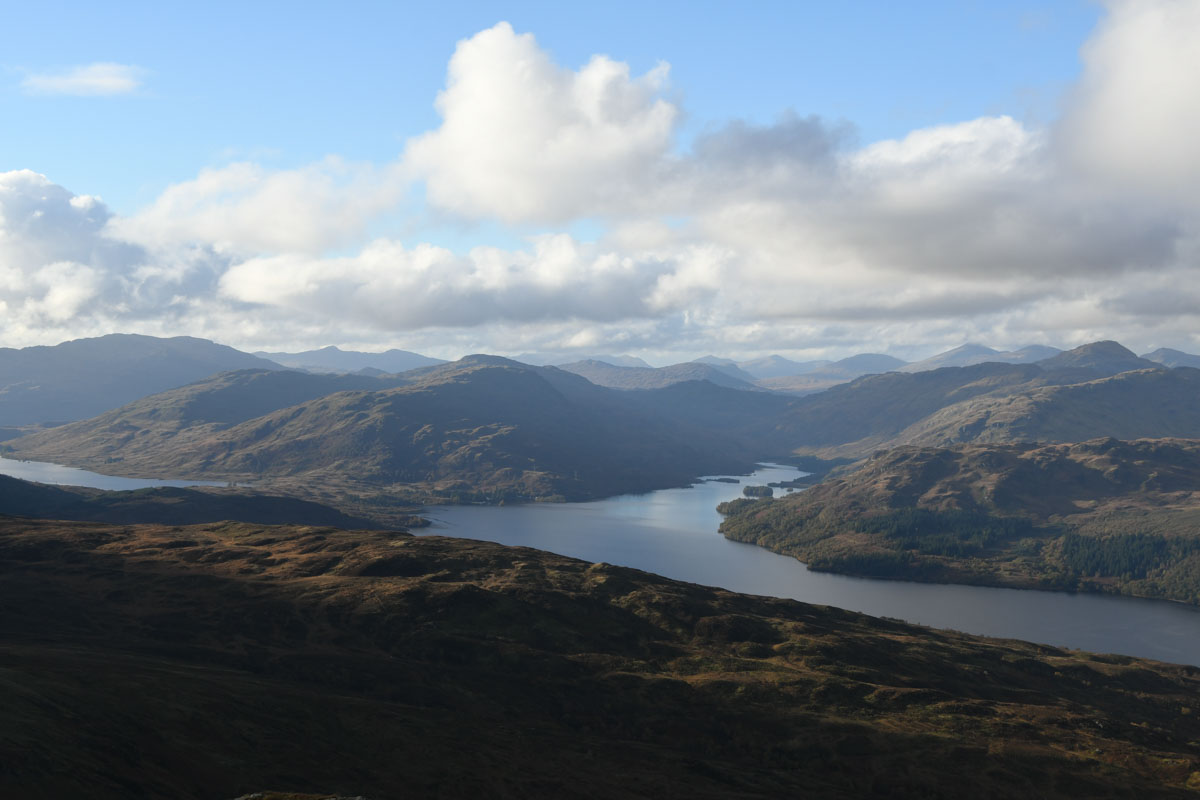 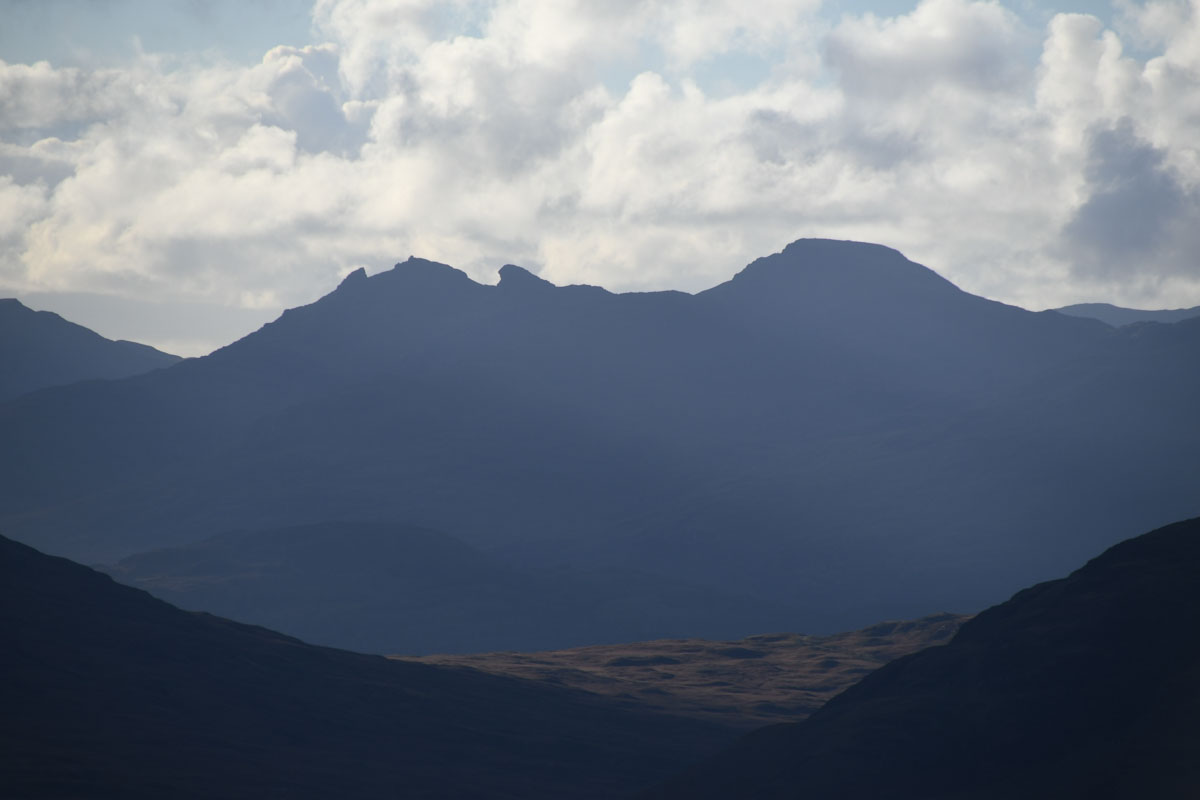 Considered hanging around til sunset, but their was a little more cloud than expected so headed back down the path.

Did get a view of a Red Deer mating high above us on the ridge – not seen that before.

With a good path it was just a wander back to the car in the gloaming. A nice wee wander.