The weekend was looking quite cloudy, the best chance of sun looked to be the west. With the best conditions forecast for the coastal strip we headed out the Mallaig road to head up a smaller hill.

The area around western Loch Monar is gnarly ground and contains a few lower Marilyns with great views. Back in 2012, on our Glenfinnan to Lochailort camping trip we’d passed close to the summit of Creag Bhan. Decided to head up this one.

The most efficient route for this one would be the path up from Arieniskill that we came down last time.

Decided to have a wander in from the west side instead.

Had a long lie and started late. Parked at the large parking area off the A830 at NM 752 826. Took the old road under the railway and then took the transmitter track uphill from there (over a very dilapidated stile).

Cut off the transmitter track and broke uphill at a nice stand of caley pines: 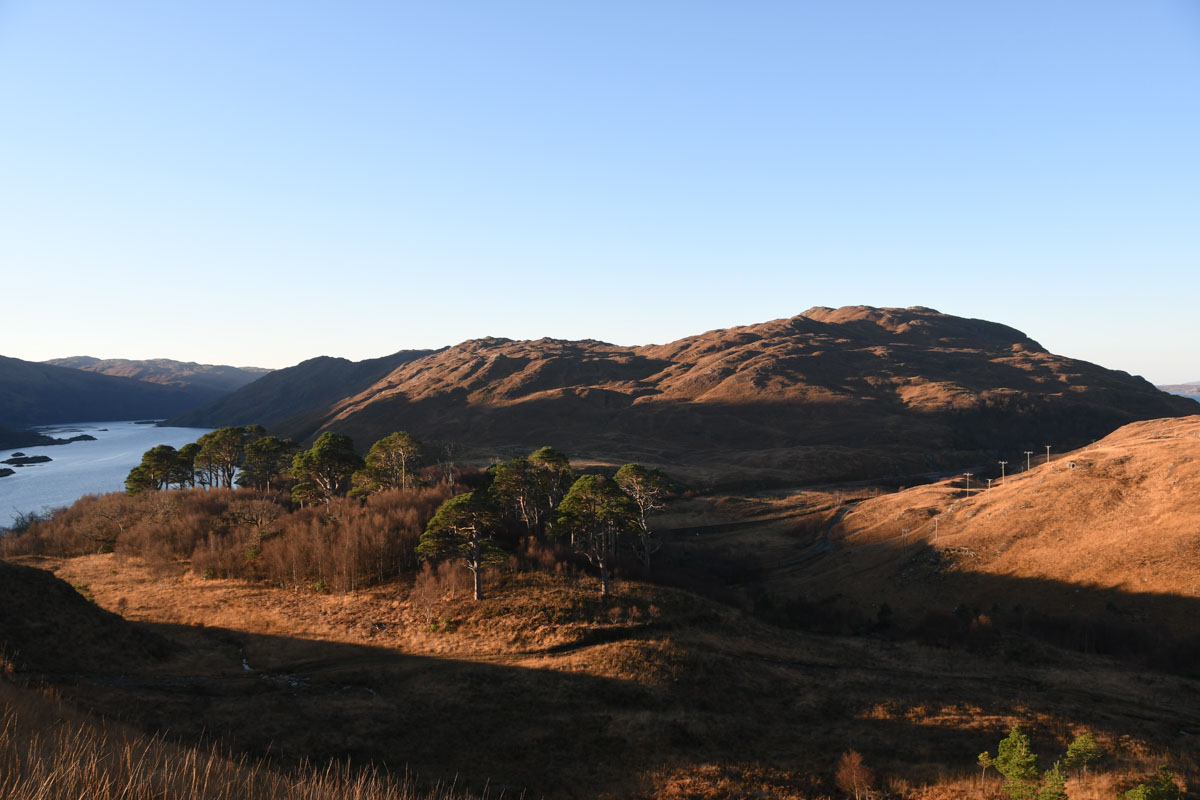 Crossed the upper deer fence at NM 756 832 (the fence is actually collapsed here, near an old stile).

Carried on uphill, up the south ridge of Arnabol Hill. A few stags were snoozing in the sunshine: 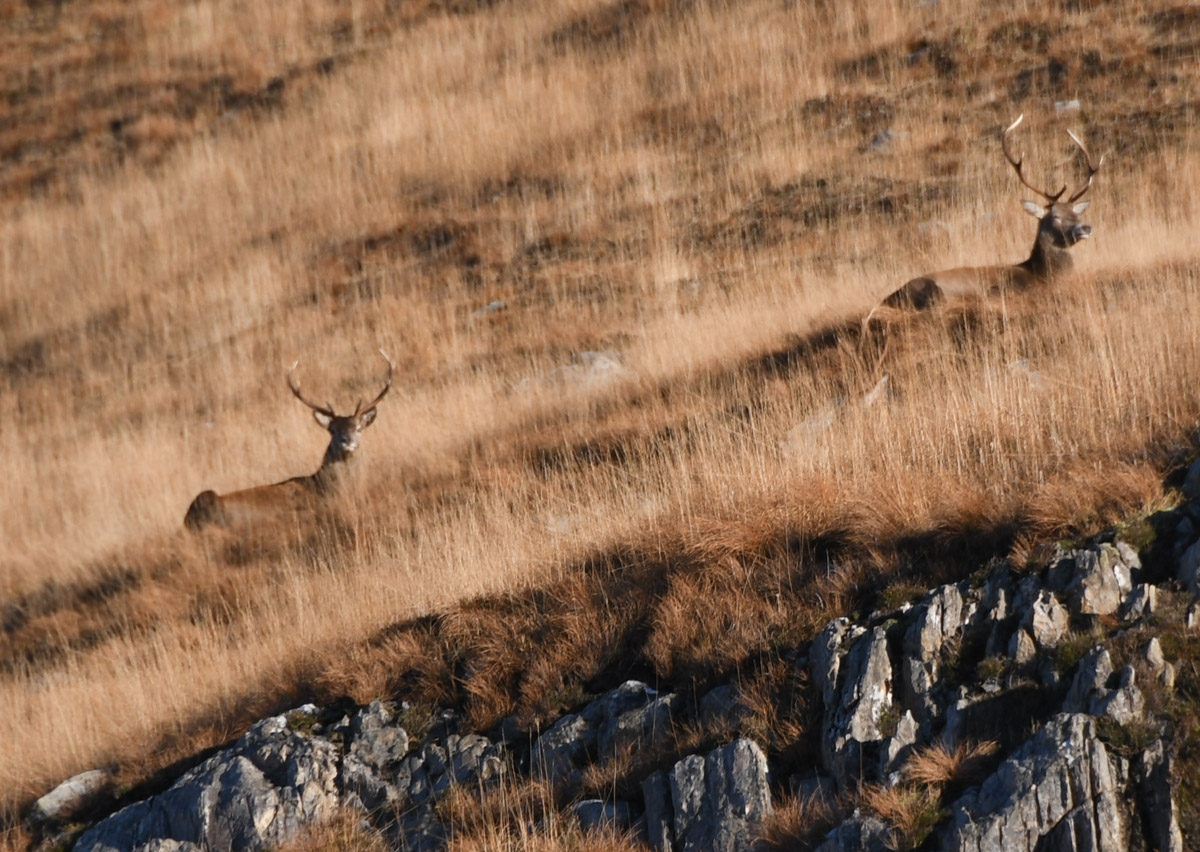 The views open up as the hill is ascended – Rum and Eigg begin to catch the eye.

The Mallaig RNLI lifeboat was scooting out to Eigg: 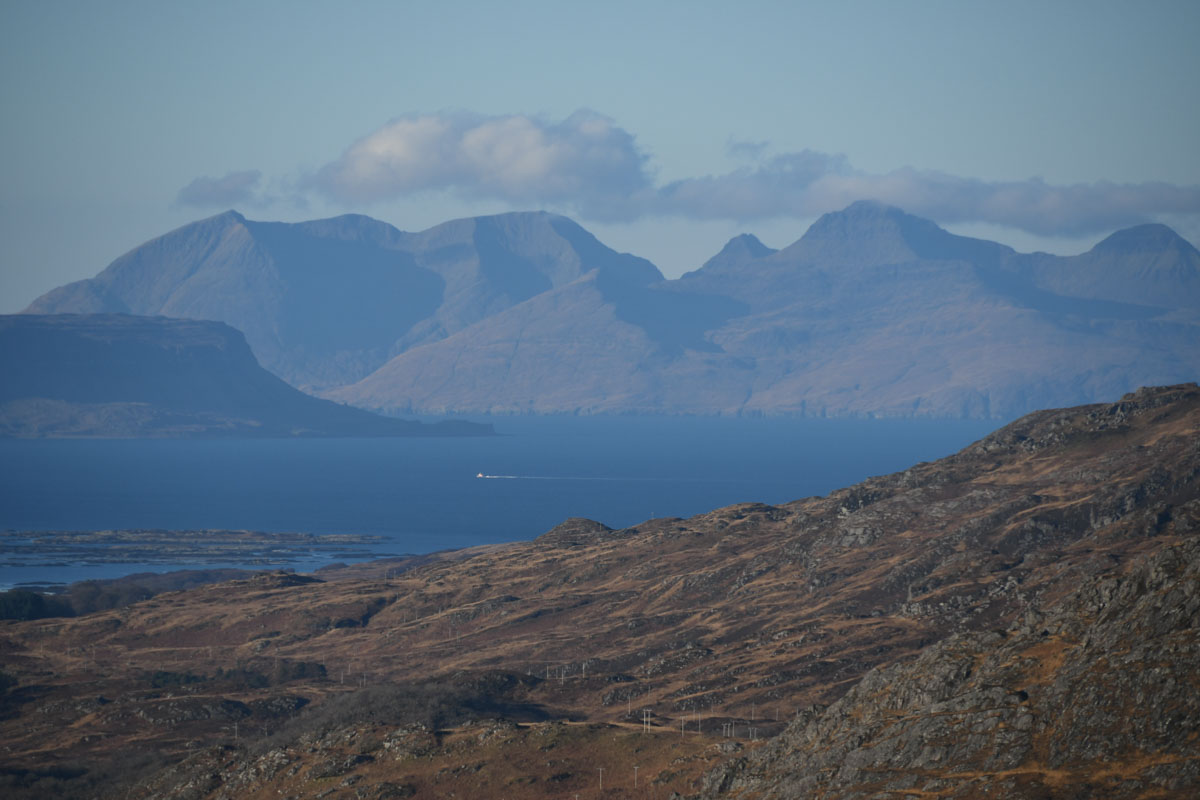 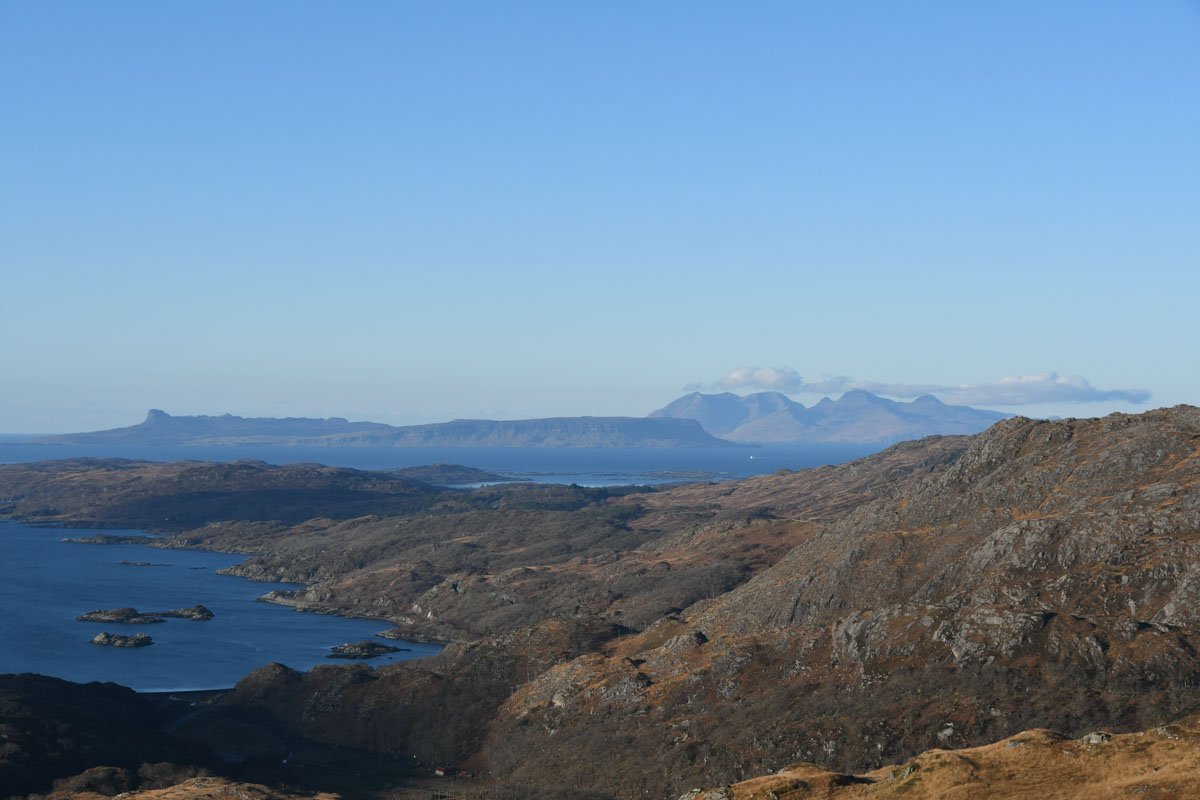 The summit area of Arnabol Hill is studded with lochans. 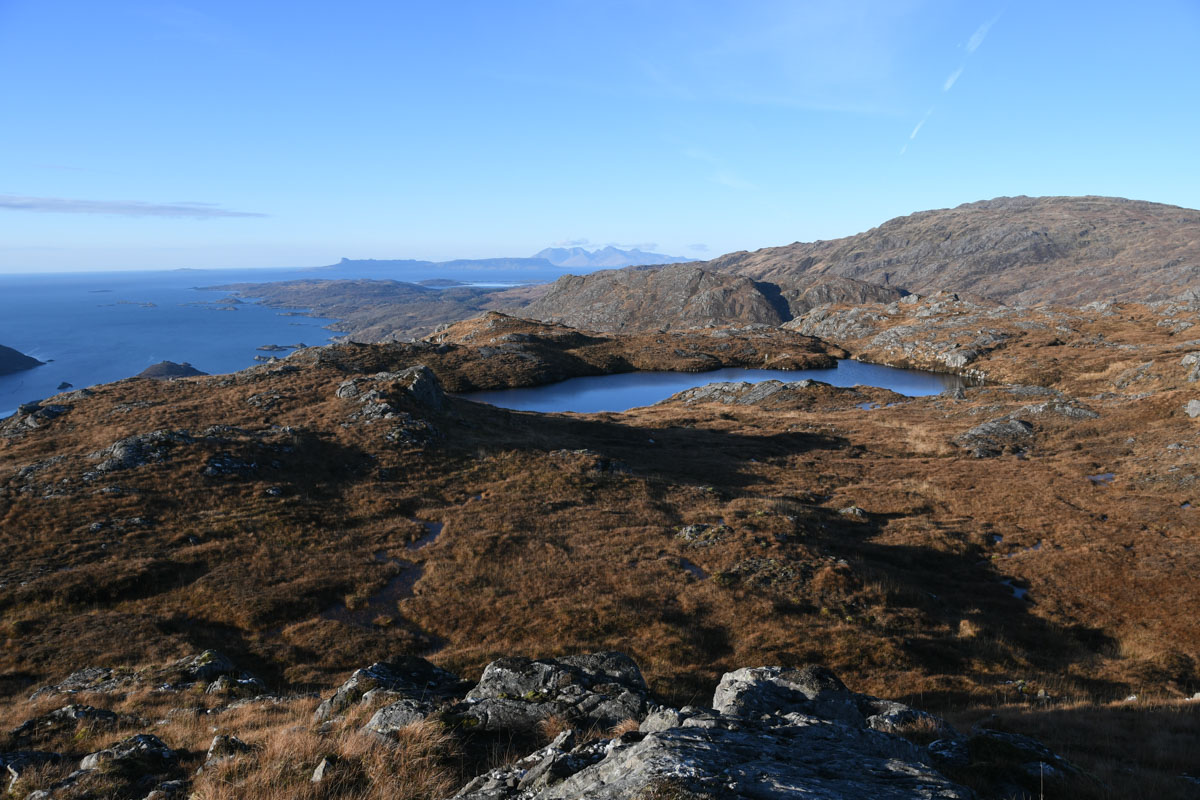 Set off from Arnabol Hill east towards Creag Bhan. We were in no hurry, just as well as progress over this kind of gnarly ground is usually slow. Bluffs, crags and wrinkles need to be bypassed. No chore in the sunshine. 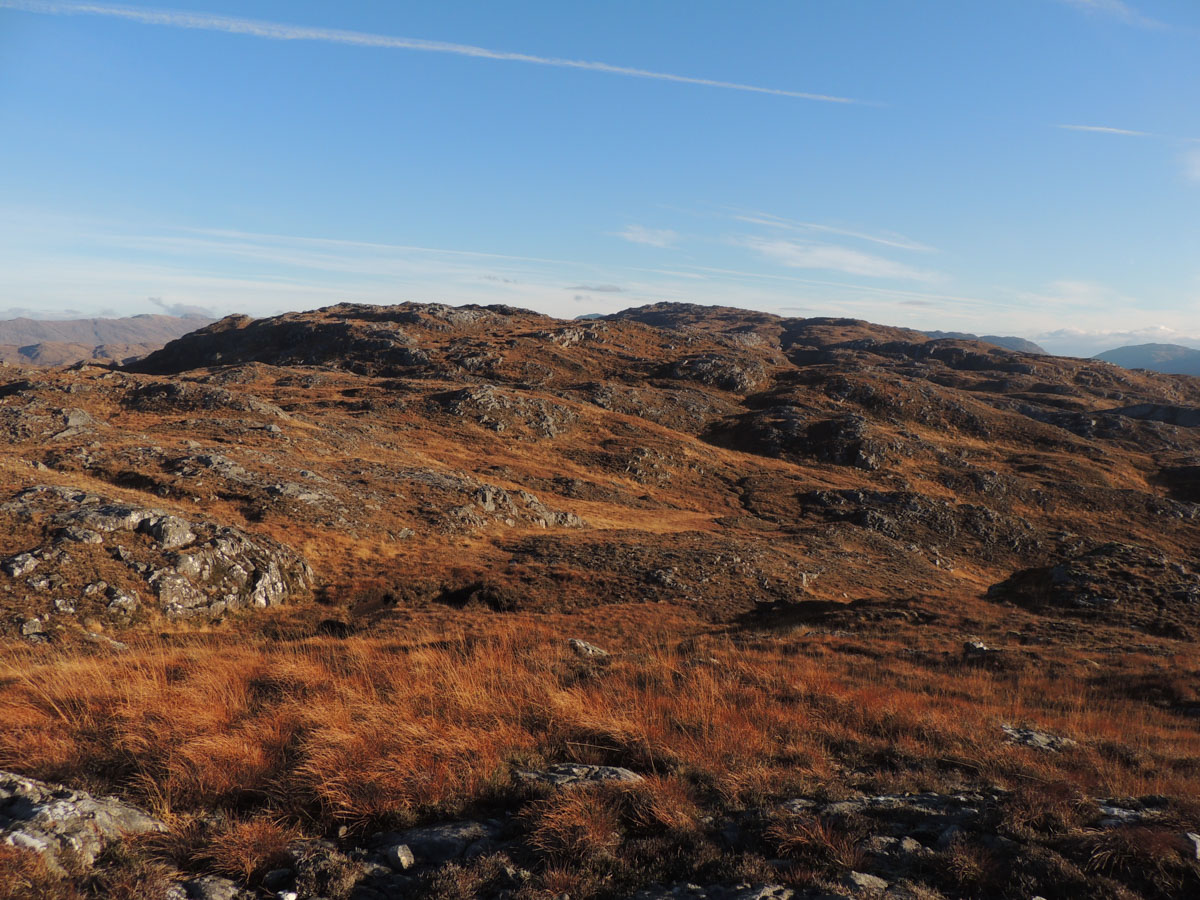 Out over Loch Ailort Ben Hiant peeks up on the Ardnamurchan peninsula. 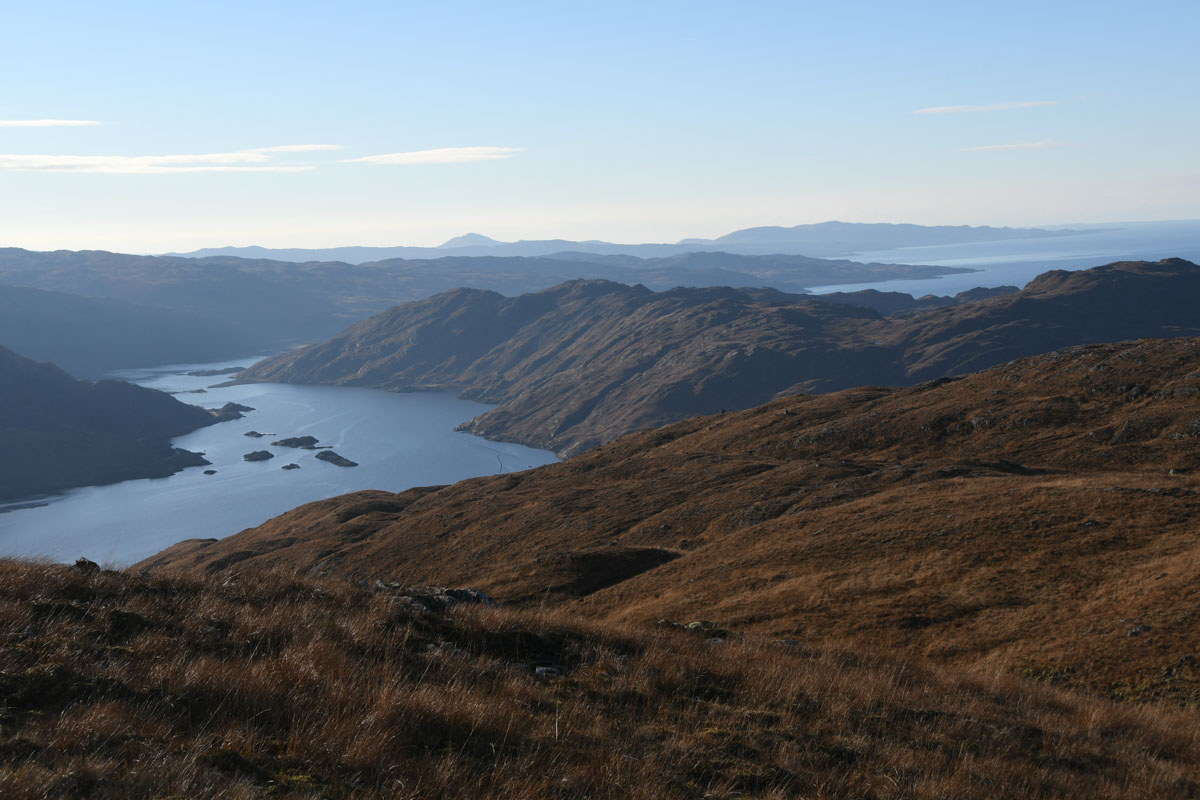 Eventually approached the summit of Creag Bhan. Up to the north was a familiar, if unexpected sight. Dun Caan on Raasay. 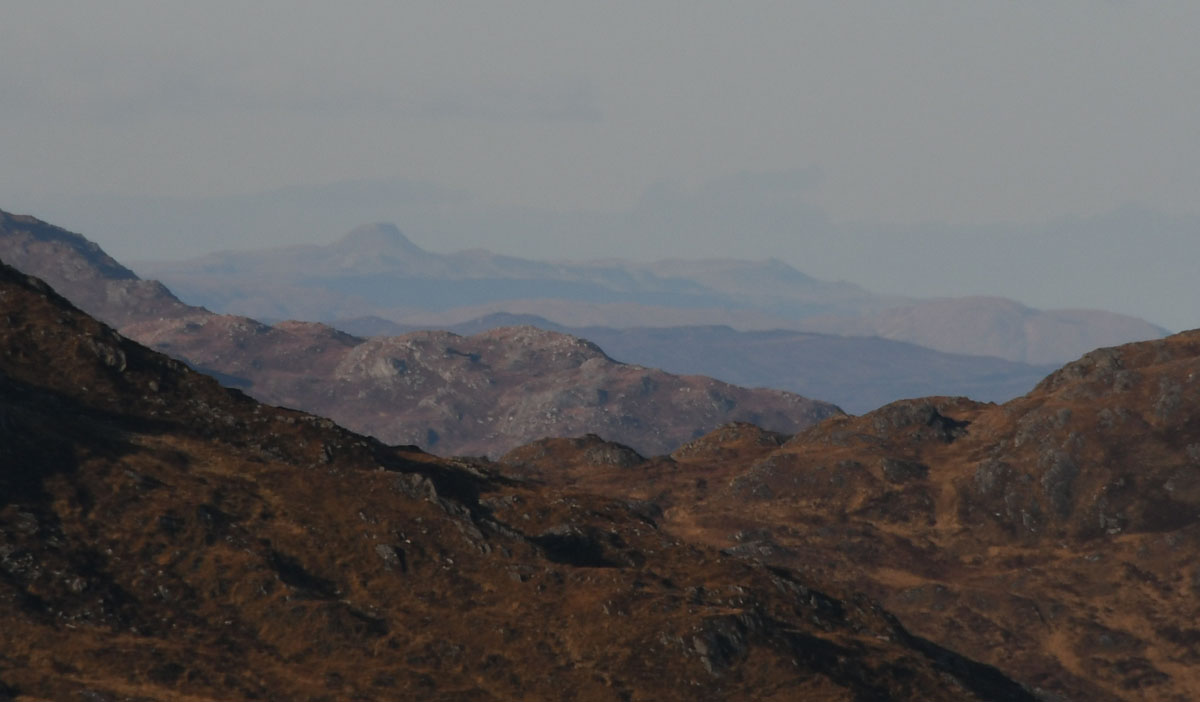 At the summit of Creag Bhan there’s suddenly a view of Loch Beoraid – one of those very secretive little lochs hidden in the quieter folds of the Highlands. 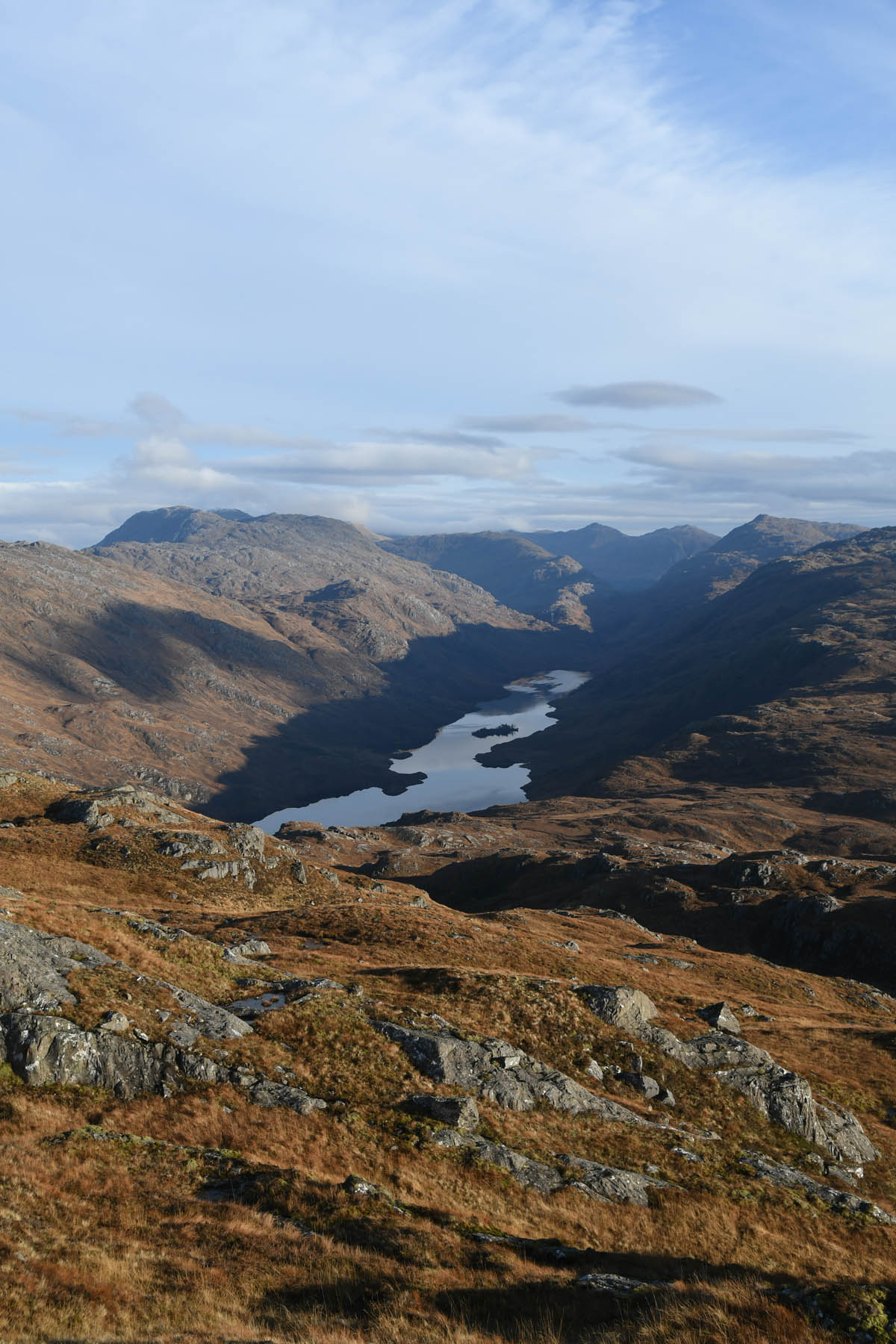 To the west Glen Mama was shaded pointing back to the Small Isles. 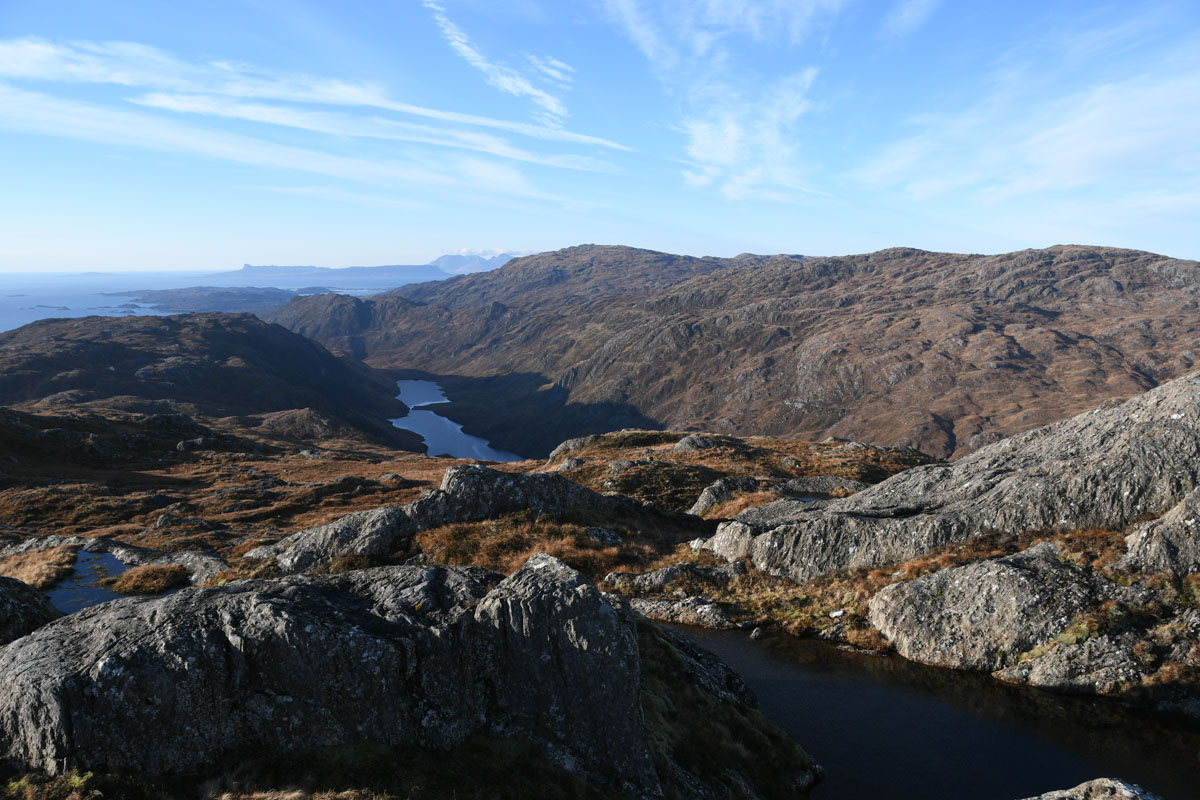 Got out of the rather biting easterly and sat down for lunch. The heat of the sun was just about detectable. Certainly cooler air than the previous weekend.

Had another look around prior to heading back – Loch Beoraid had a bit of reflection: 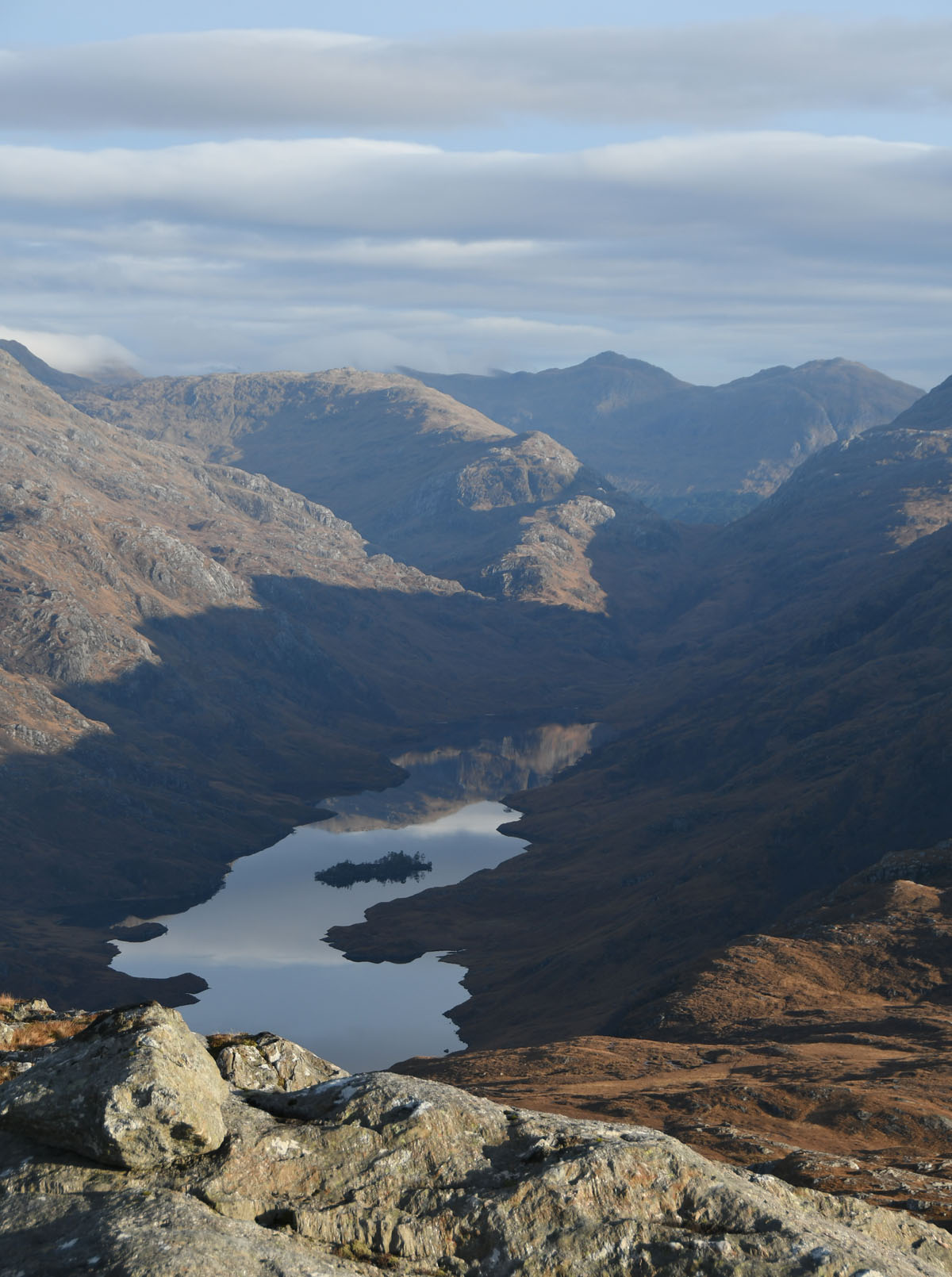 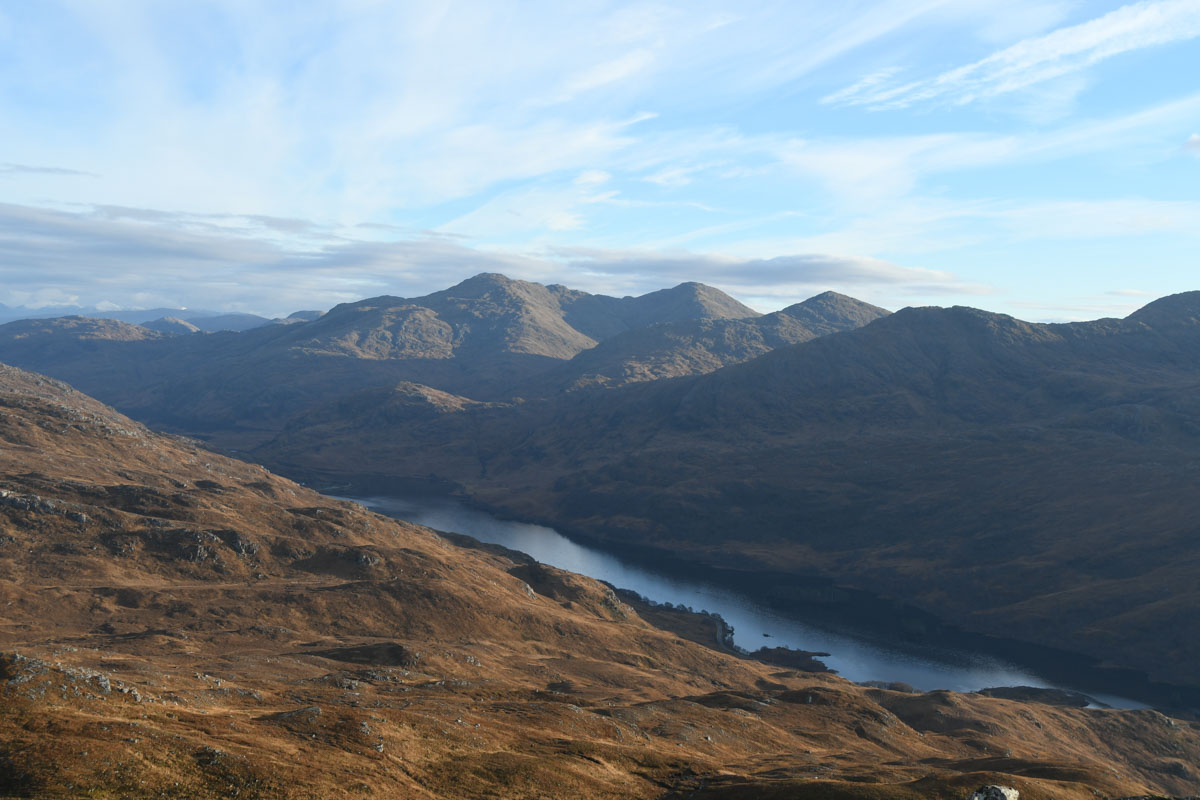 Dropping down to Arieniskill would have meant a few km of road walking so we reversed route. Back over the gnarly ground we went. 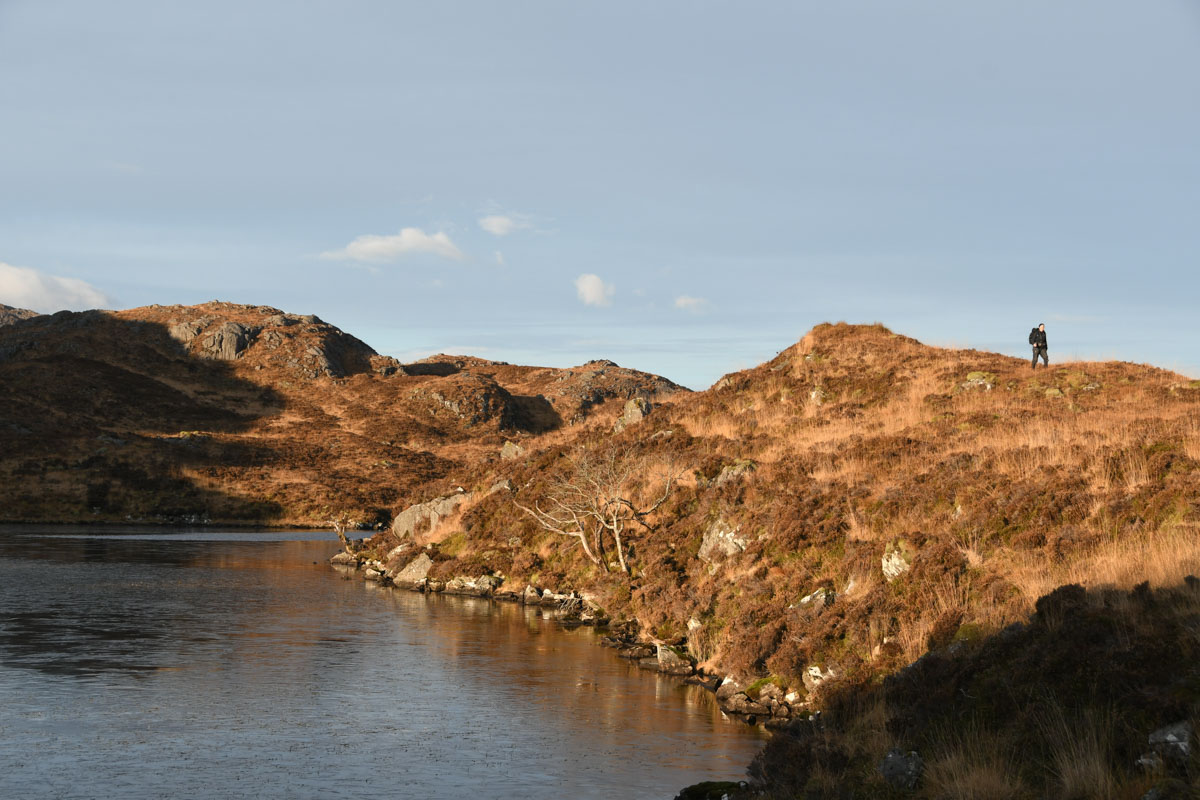 Ben Nevis was getting a little more sunlight as the sun lowered. 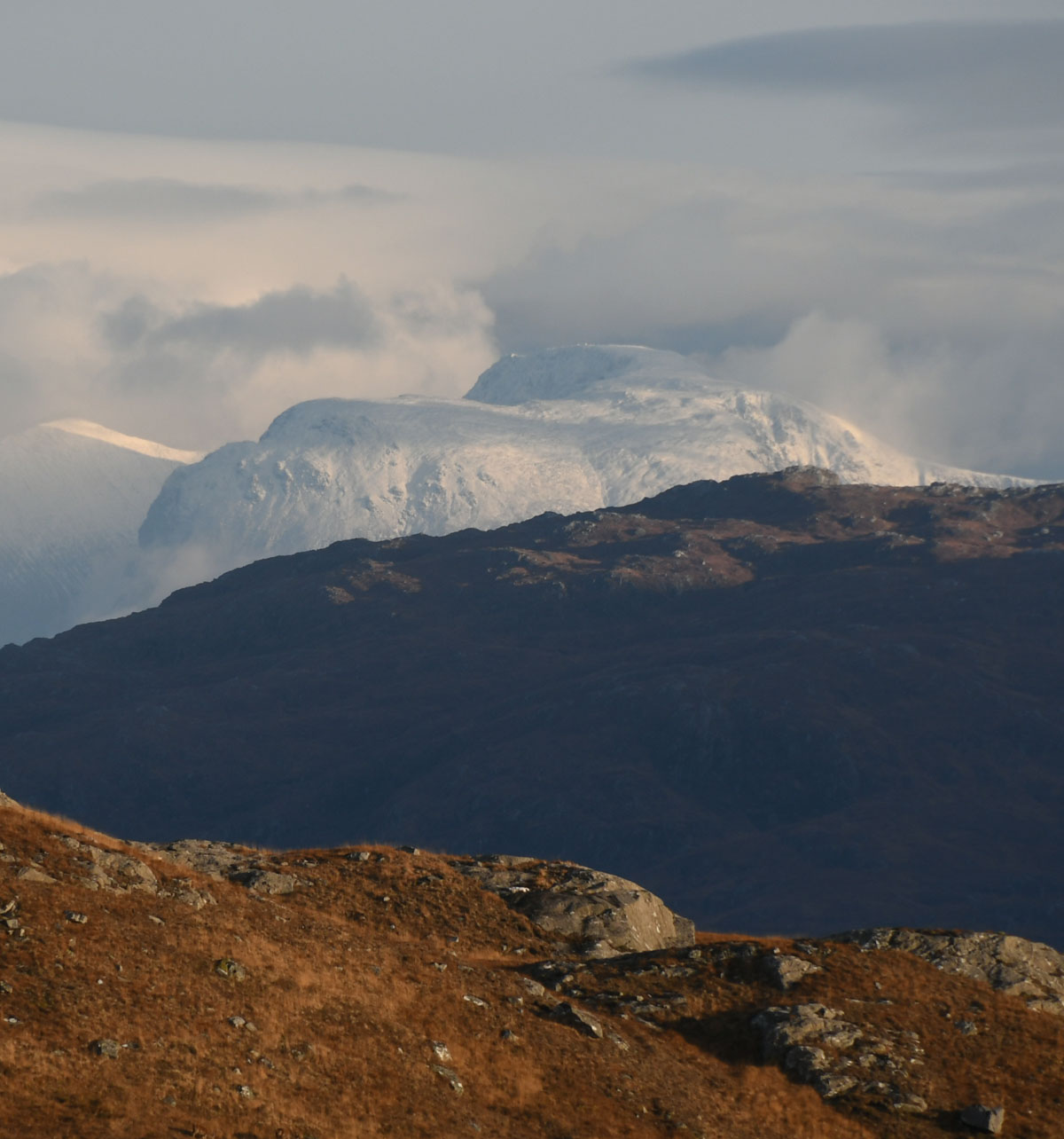 Spotted a juvenile Golden Eagle sailing by on a late foray. The lowering light and autumn grasses were attractive. 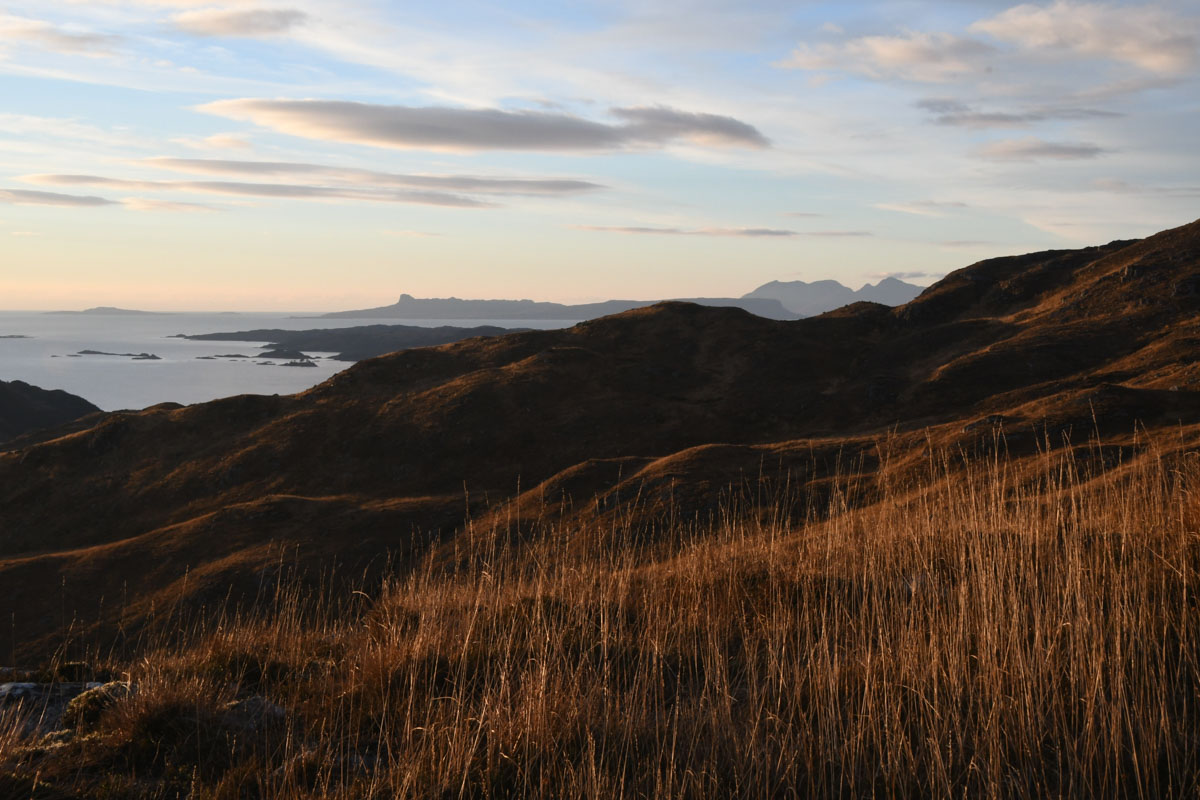 We dropped down Beinn a Chamais Dhrisich rather than returning to Arnabol Hill. Wandered slowly down the hill waiting for sunset. 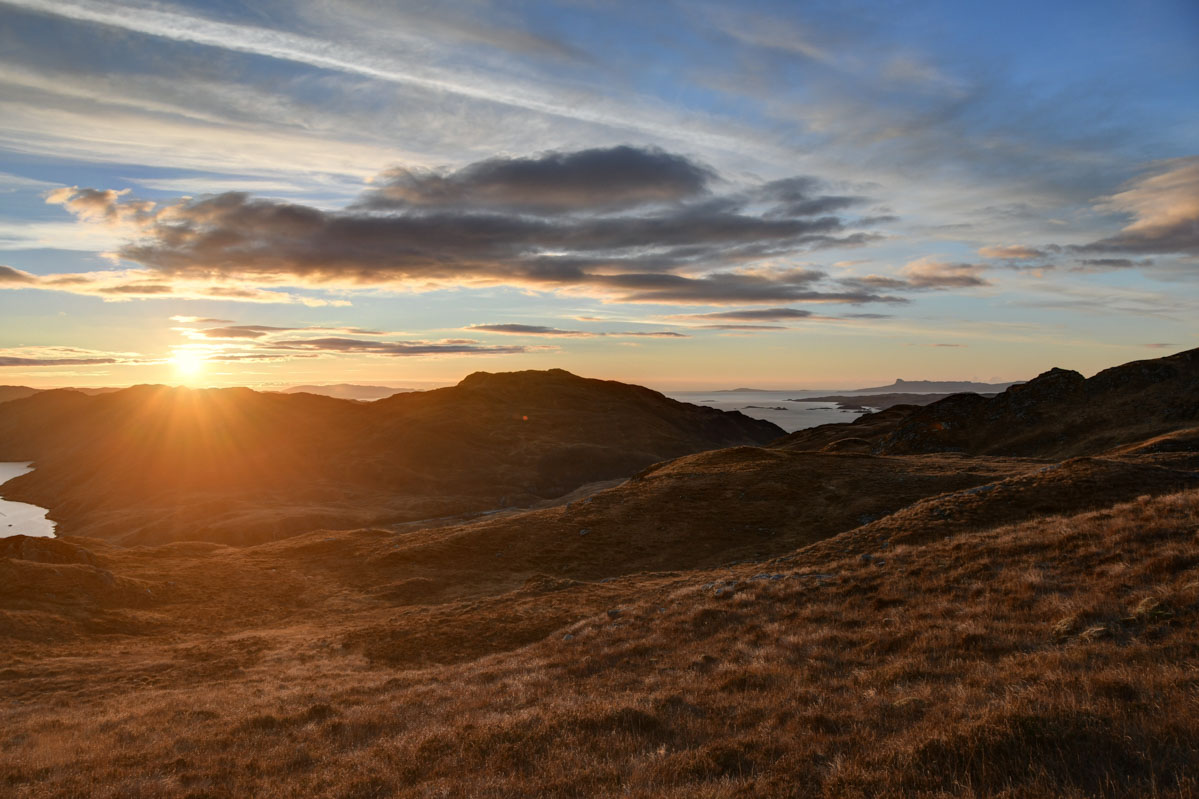 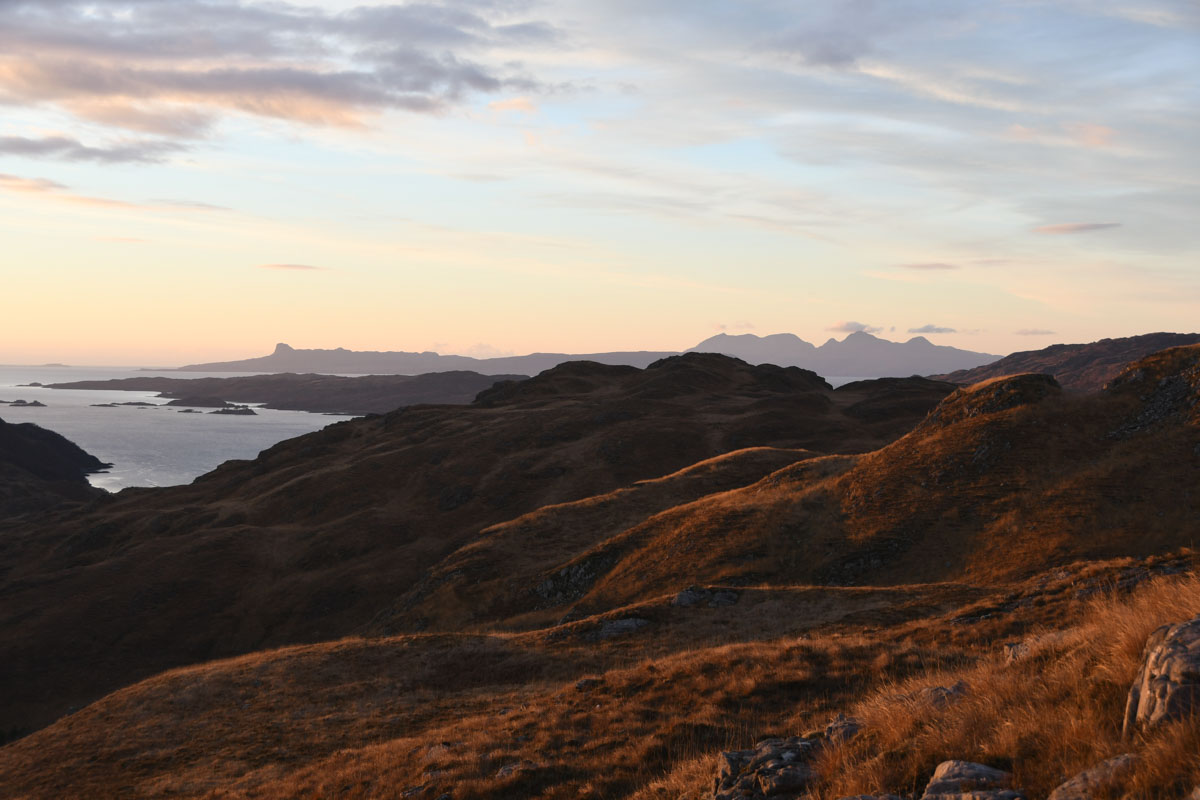 Back to the transmitter at near to sunset it was a quick wander back to the car.

There are too many fine wee corners in this part of Scotland. Having revisited it did whet the appetite for more – Sithean Mor in particular looks like a wee hill with stellar views.

One thought on “Creag Bhan near Lochailort. Saturday 24th November 2018.”