On our “winter” holiday in Speyside – and almost all the snow had gone. The week’s weather looked rather benign for once, mild and generally light winds.

Having had a low level wander on a windy Saturday we decided to head up to Ben MacDui for Sunday on our usual wander.

A leisurely start well after dawn and out across the Northern Corries to ascend the west flank of Cairn Lochan. A bit of high cloud was blunting the sunshine and the initial impression was of a bit of haze. 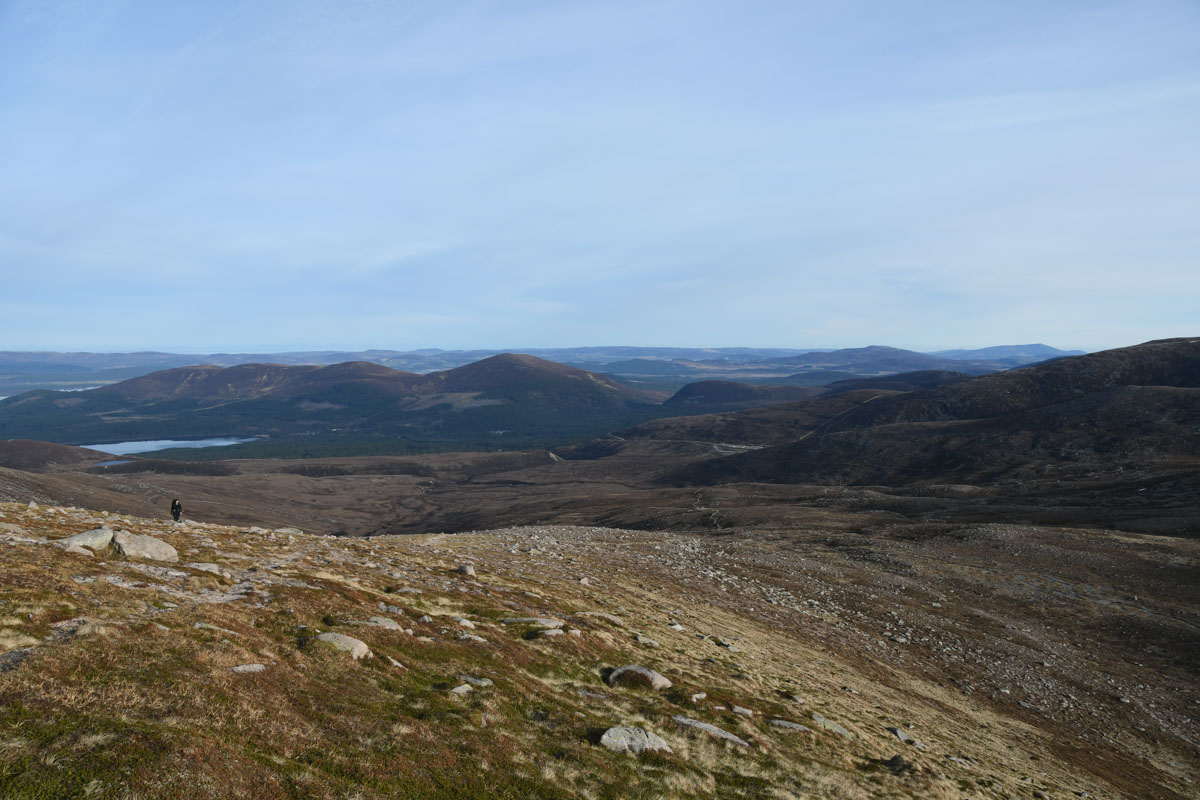 Once up to the 1083m point we found that the air clarity was pretty good – a nice view out past Sgoran Dubh Mor to Creag Meagaidh and The Window. 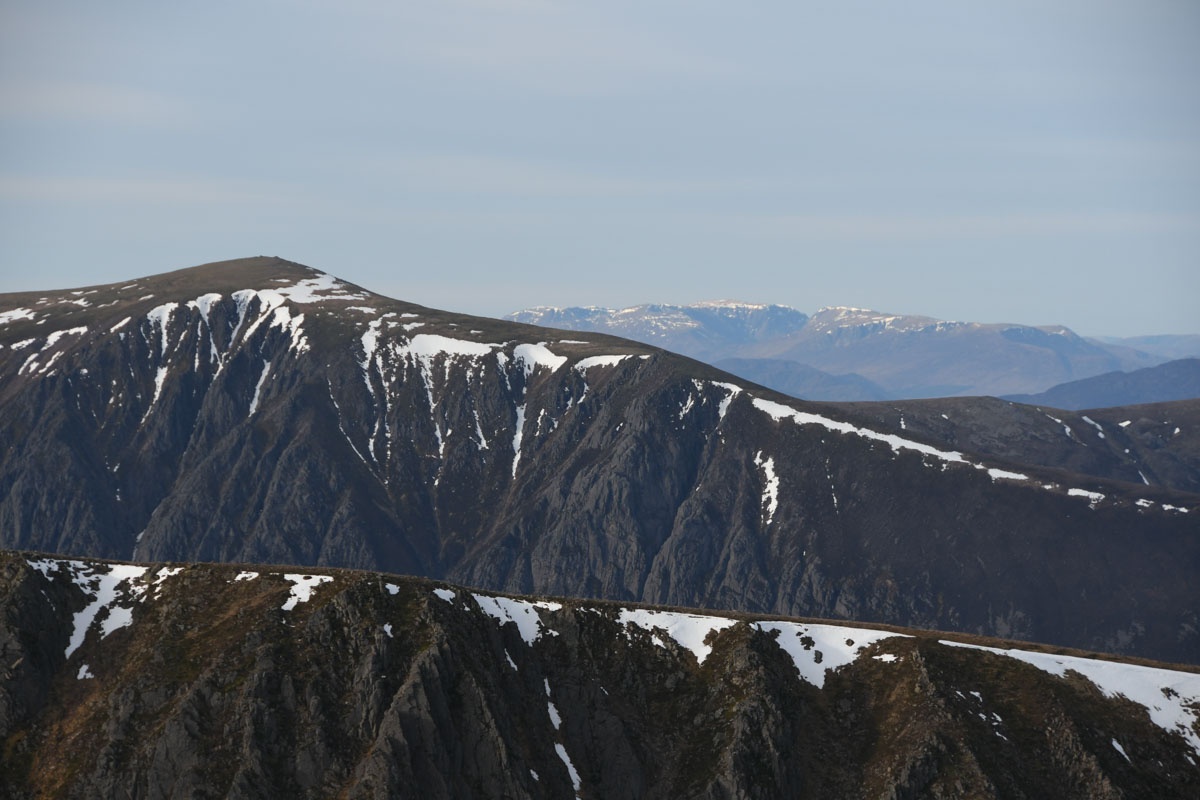 It’s always worth heading along the west edge of the 1083m area, great views down the Lairig Ghru for one thing, a good ptarmigan area for another.

No Ptarmigan this time, but the view south to Beinn a Ghlo over Bod an Deamhain was nice.

Bod an Deamhain and Lairig Ghru: 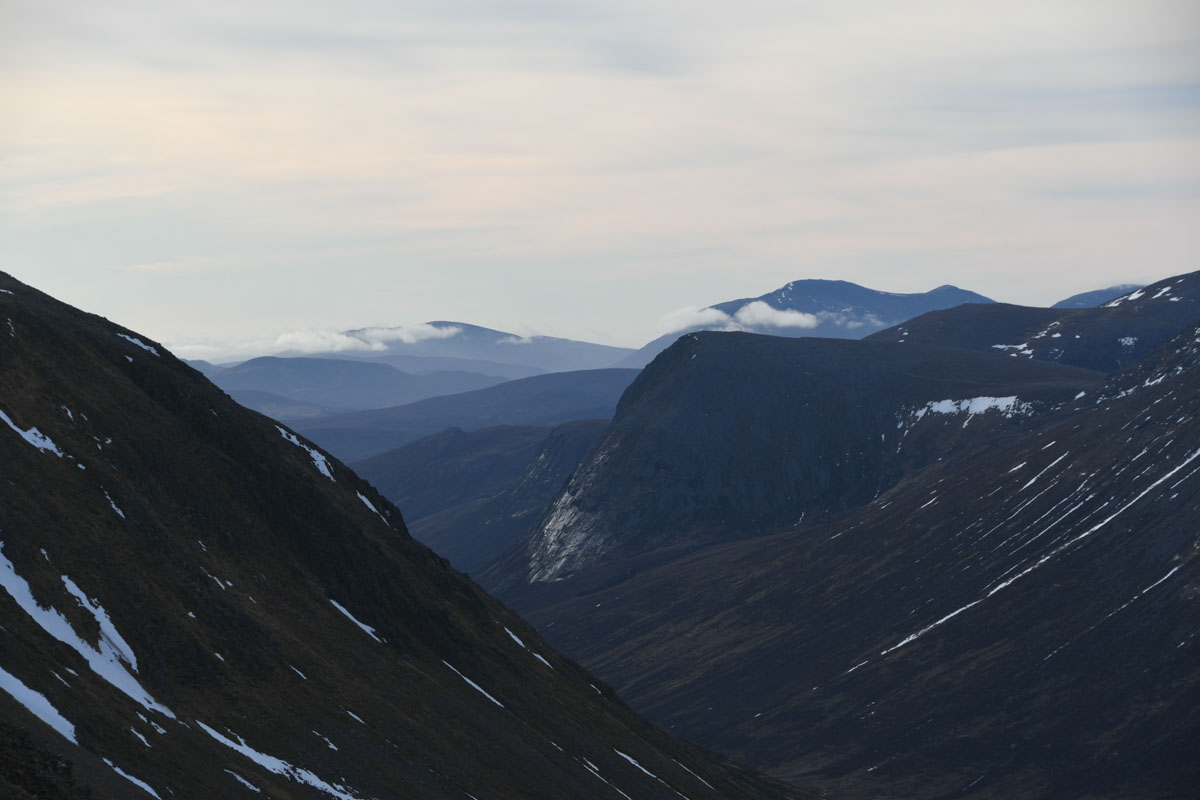 Most of the snow had stripped back in February’s thaw, but there was still a decent covering over the boulderfields between Cairn Lochan and Ben Macdui. 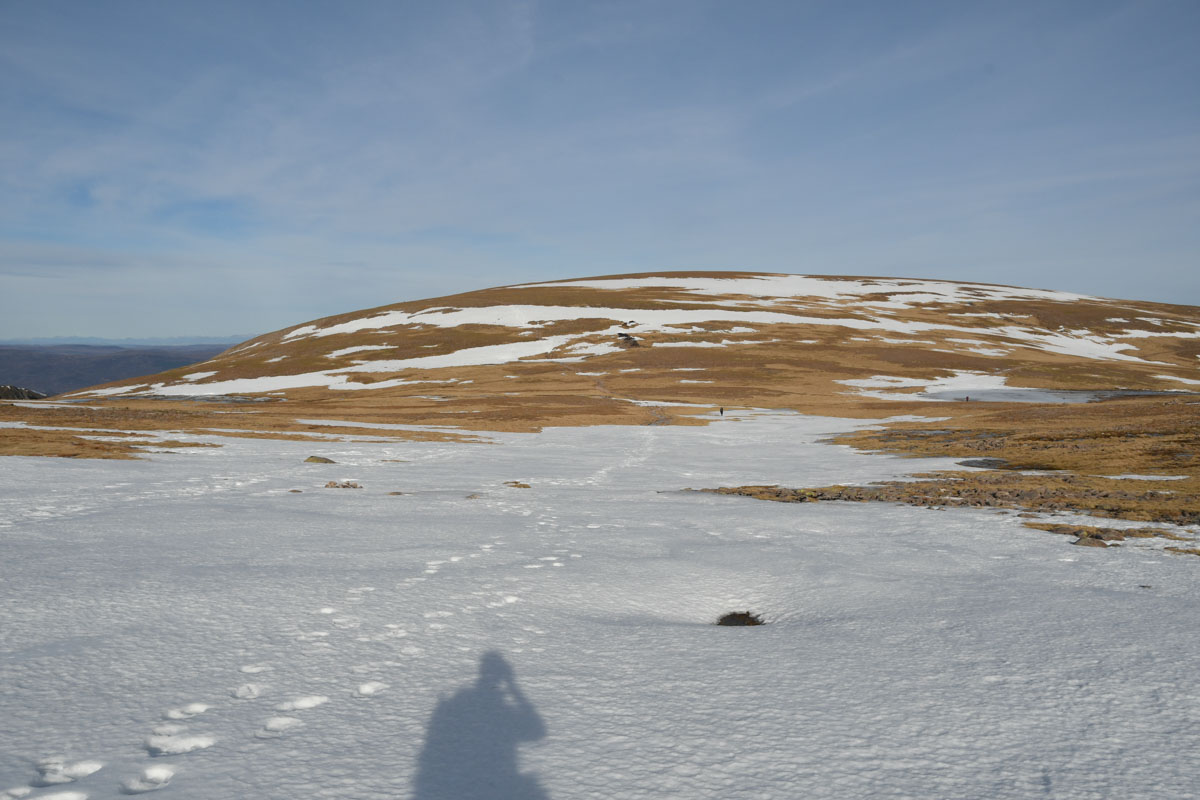 To the NE Bynack More looked snow-free, with a good sight line out to Ben Rinnes. 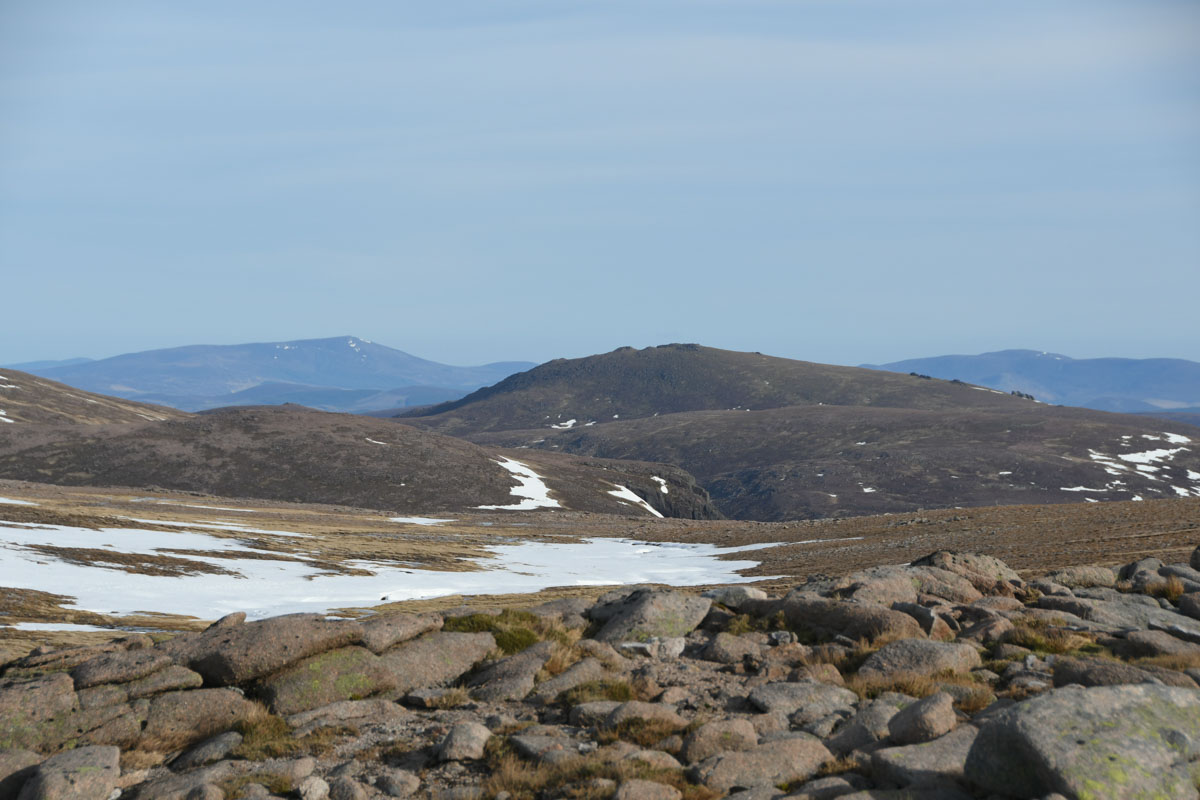 Heading up to Ben Macdui we had microspikes on, but no need for Ice axe or crampons. Out to the SE we could see the gap between Ben Alder and the Lancet Edge nicely. Unusually we could see Bidean nam Bian out beyond that. Not sure I’ve ever noticed that before. 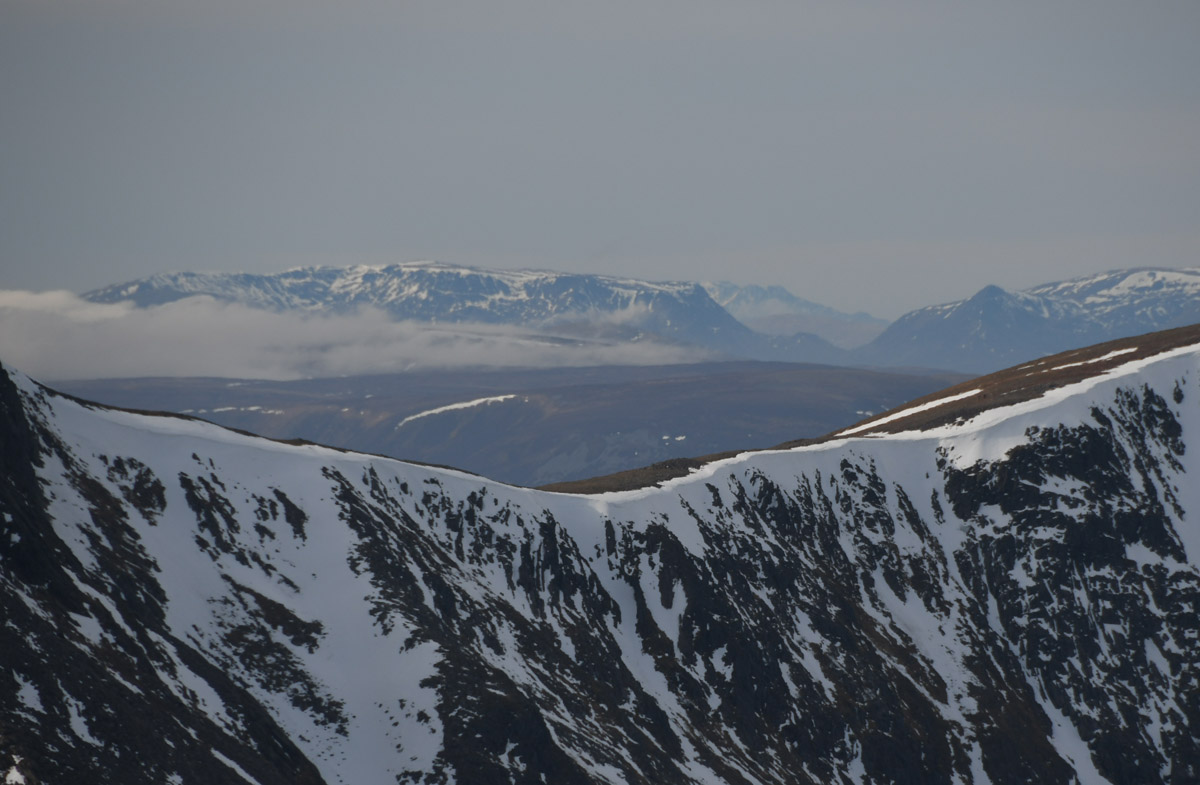 On the final approach to Ben Macdui the view across Lairig Ghru to Carn Tou and Braeriach is always admired. 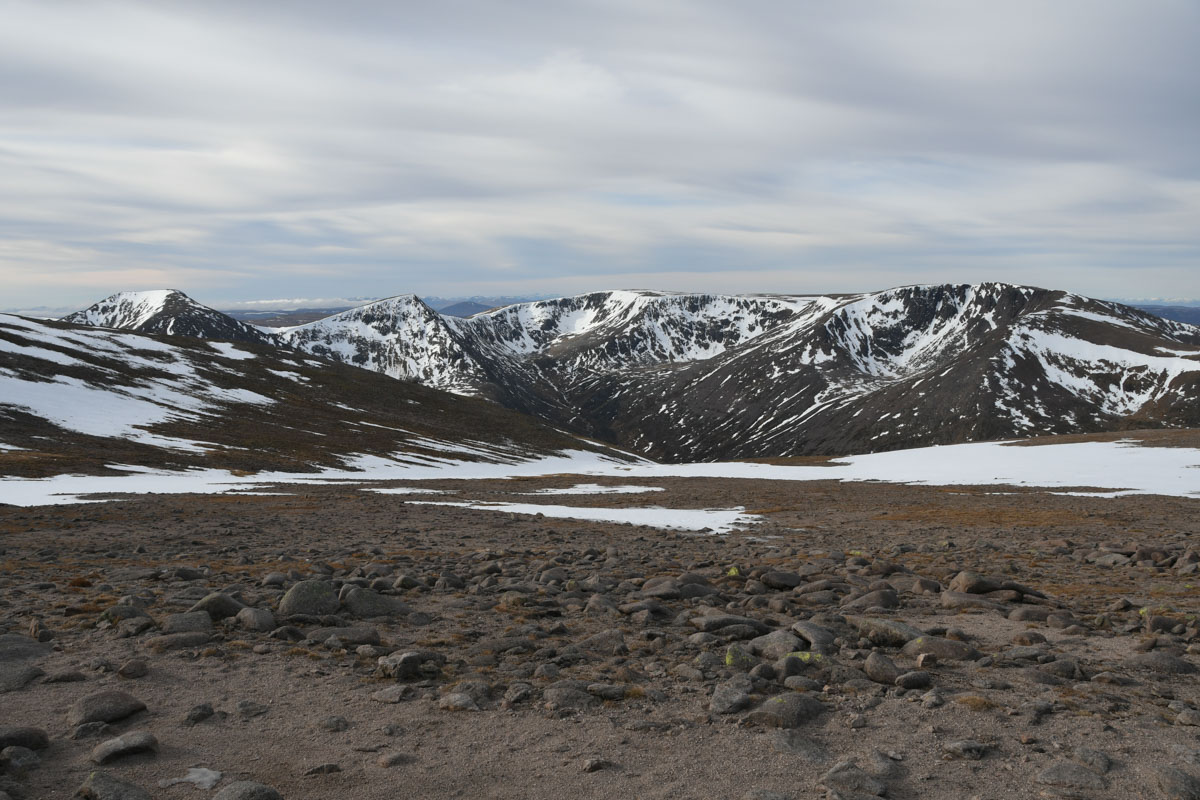 Air clarity was very good, out to the west Sgurr na Ciche was easily seen and identified, we’ve seen that before, if rather rarely.

Up to Macdui and had some food, to the south the hills were mainly obscured by cloud, quite atmospheric. 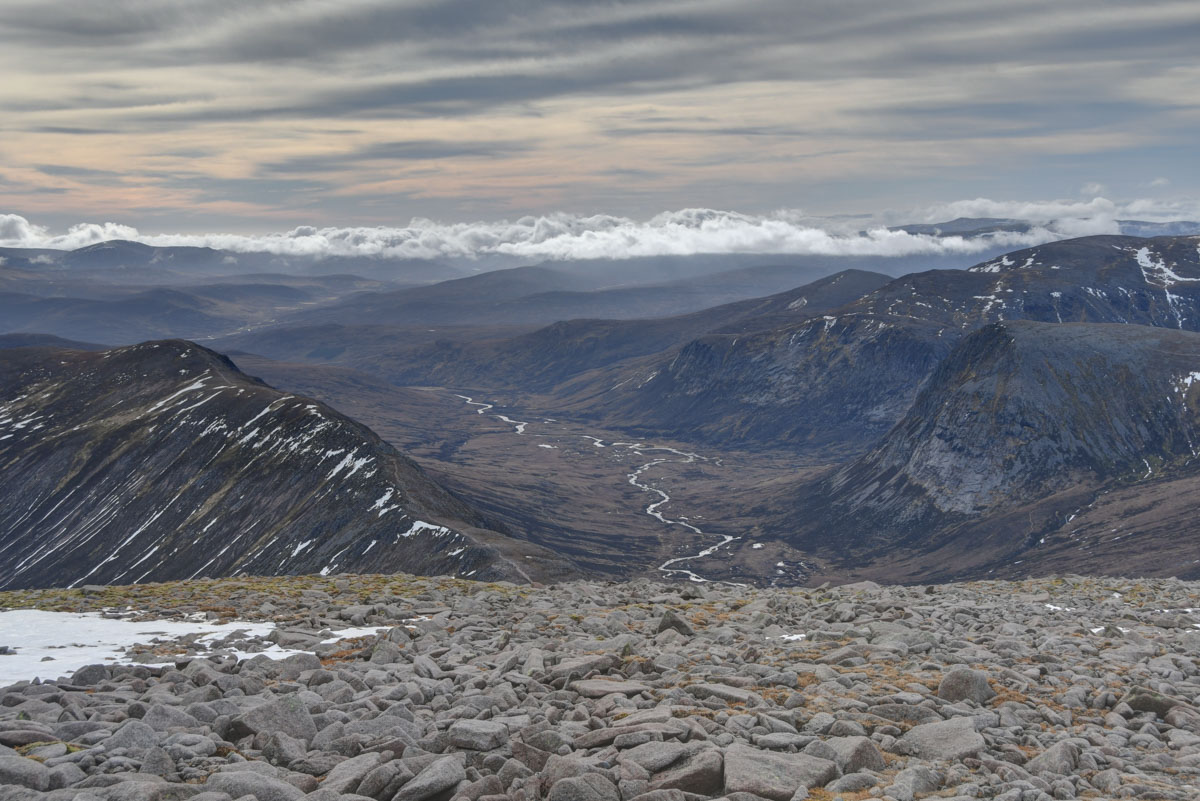 Headed back along the route of approach, dropping back down from Ben Macdui we finally noticed a ptarmigan, using some of the limited snow as cover. 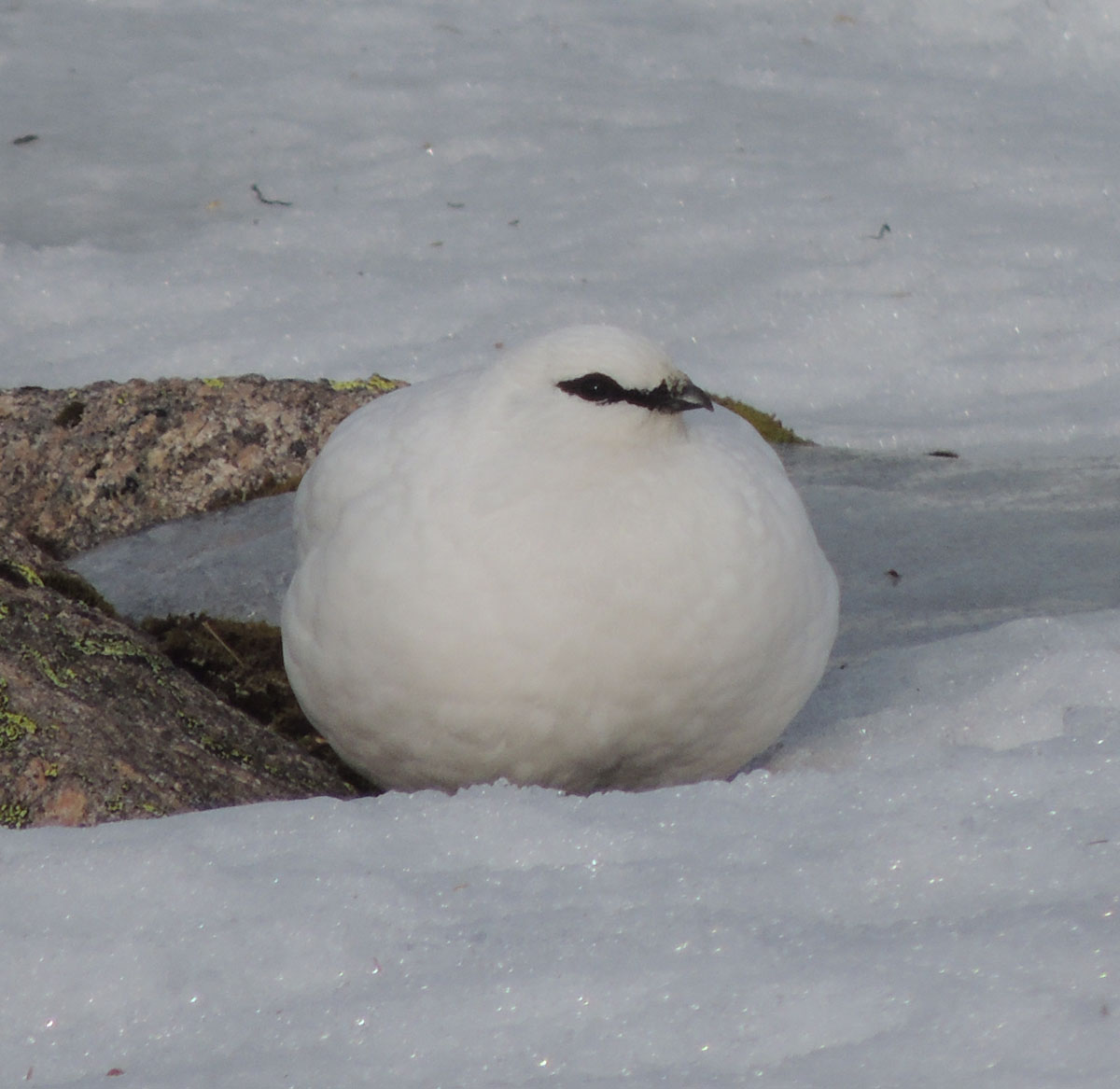 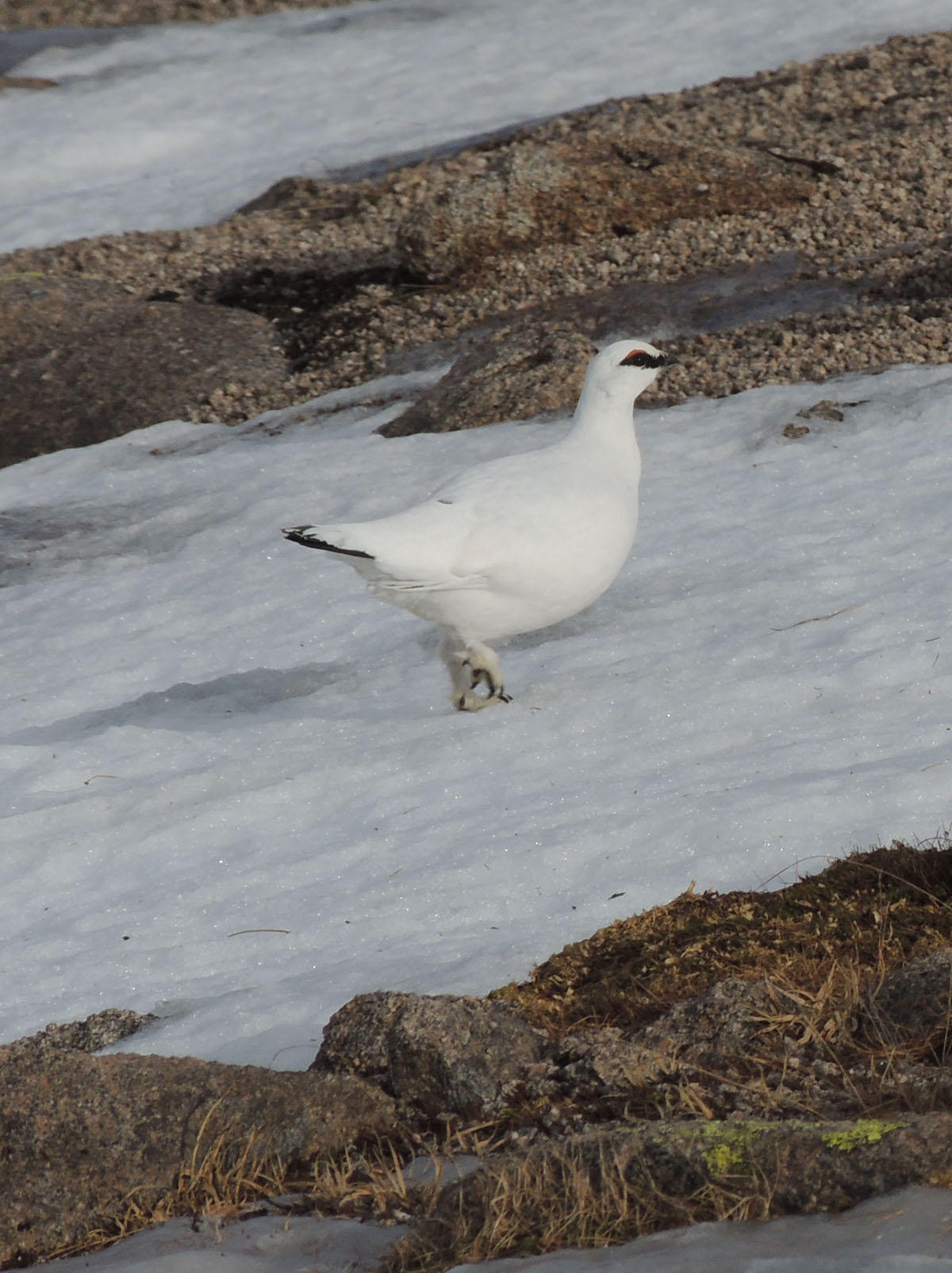 Back over to Cairn Lochan and we admired the view north. We had already noted some very unusually long views north and NW, these were clearest in the afternoon. Very unusually we could see Ben Hope at 160km distance by eyeball. I don’t think we’ve ever had that kind of clarity before. We also picked out Ben Loyal, Ben More Assynt, Maol Cheann-dearg and Ben Damh. Nerdy – but we like it. 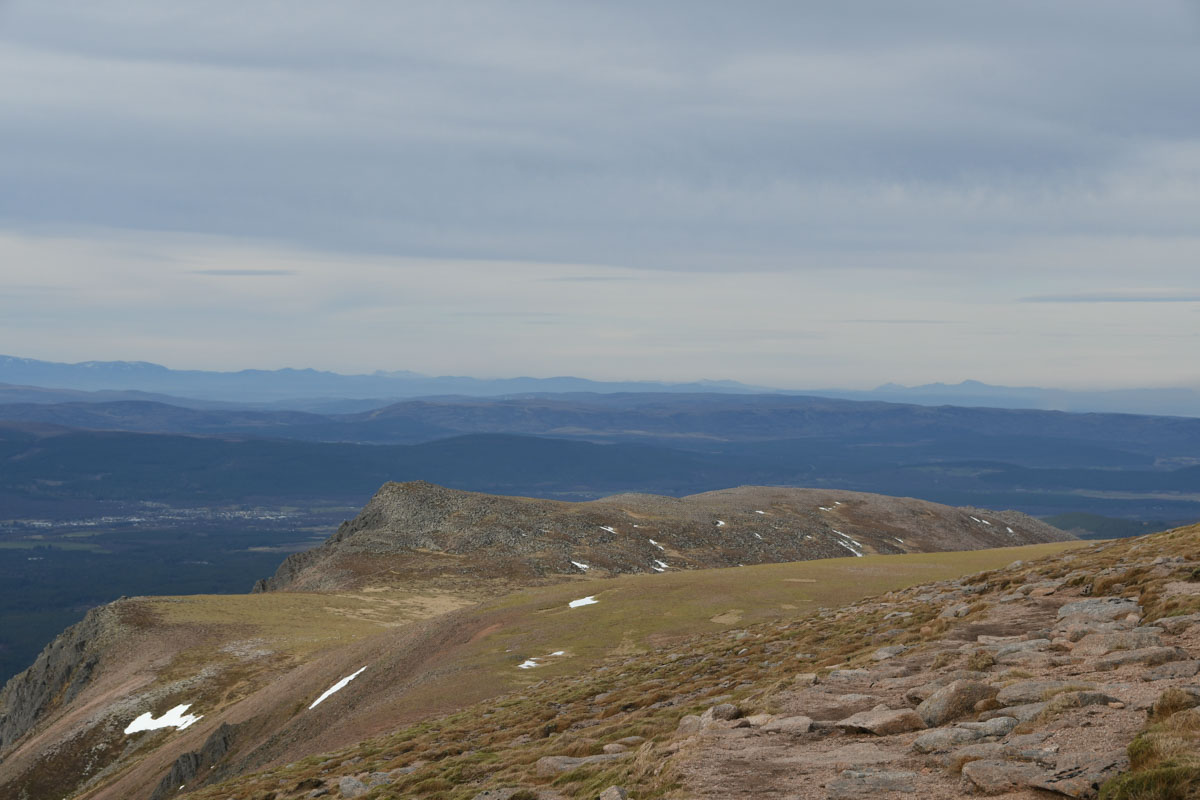 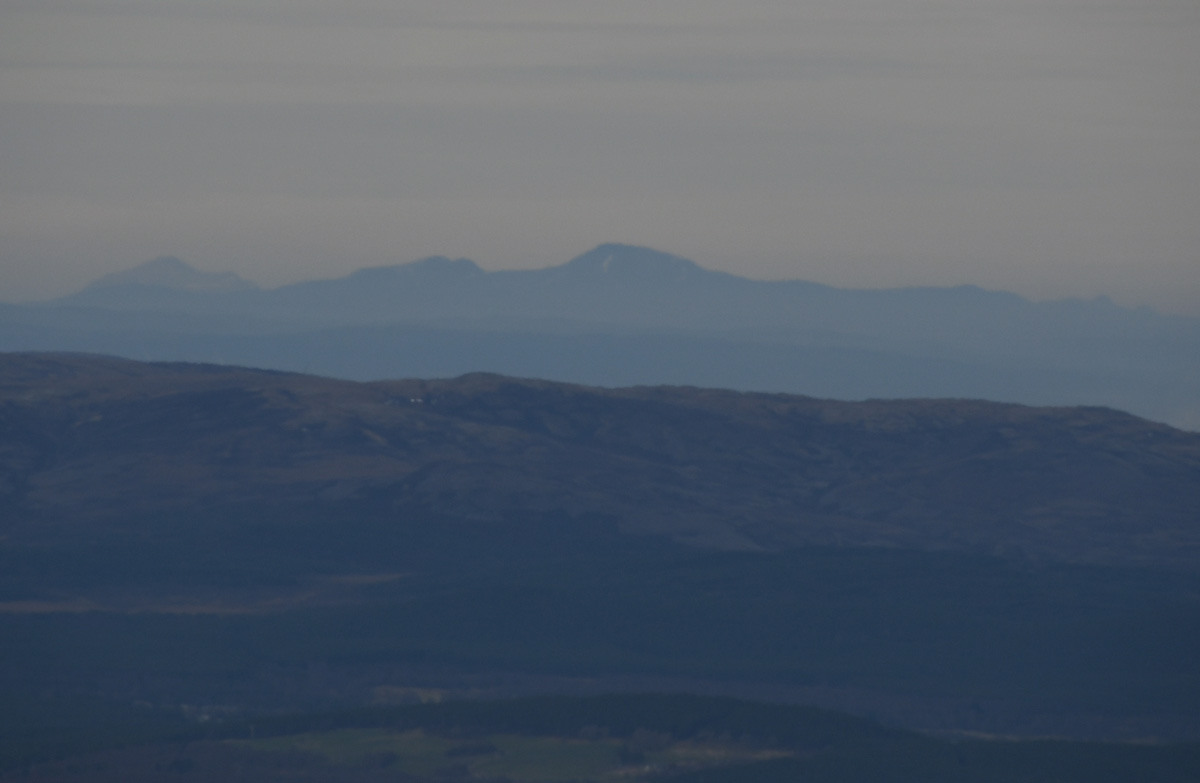 Back to the south the views were more immediate and dramatic. 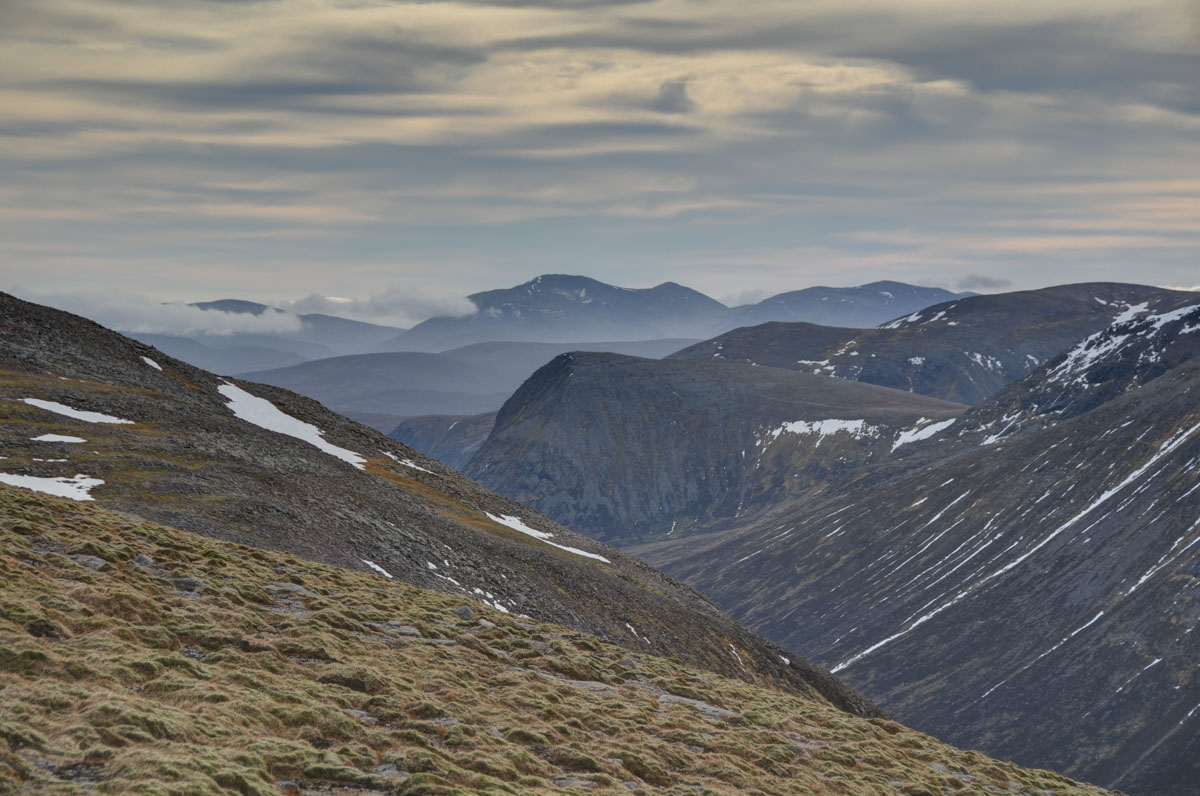 Spotted another pair of ptarmigan on snow patches….I wonder how the poor wee birdies have fared with such poor snow conditions to hide in. 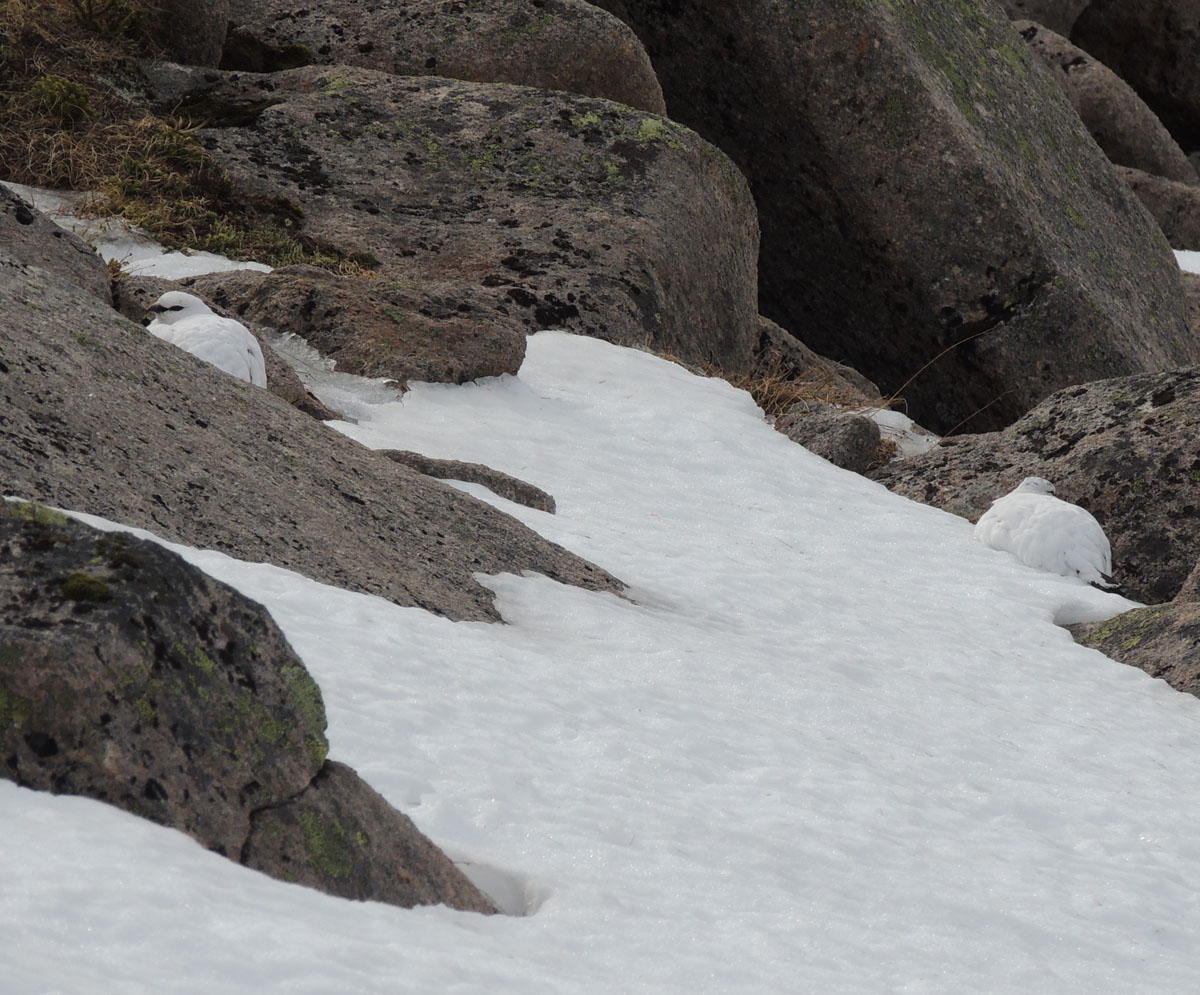 Back down to the car we headed back to our accommodation for some pine marten and badger watching, preceded by a rather dramatic sunset. 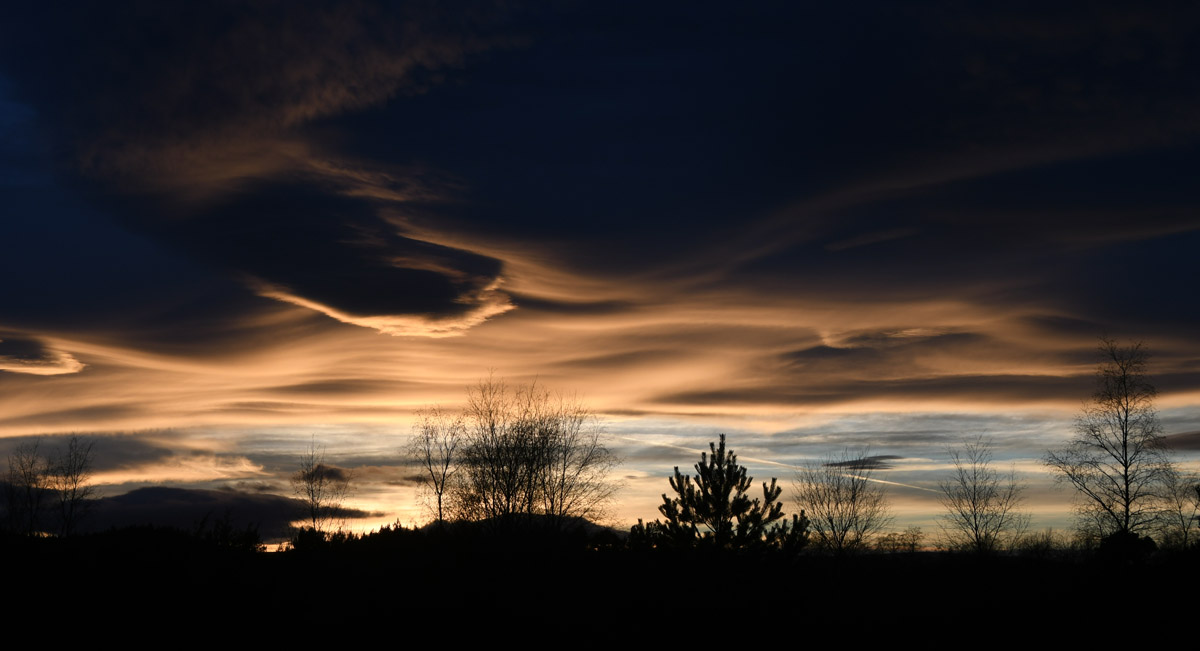