Wednesday of our holiday was looking quite a nice day. We parked up at Glenmore Lodge early on, heading out through the Ryvoan Pass and into the sunshine on the far side. 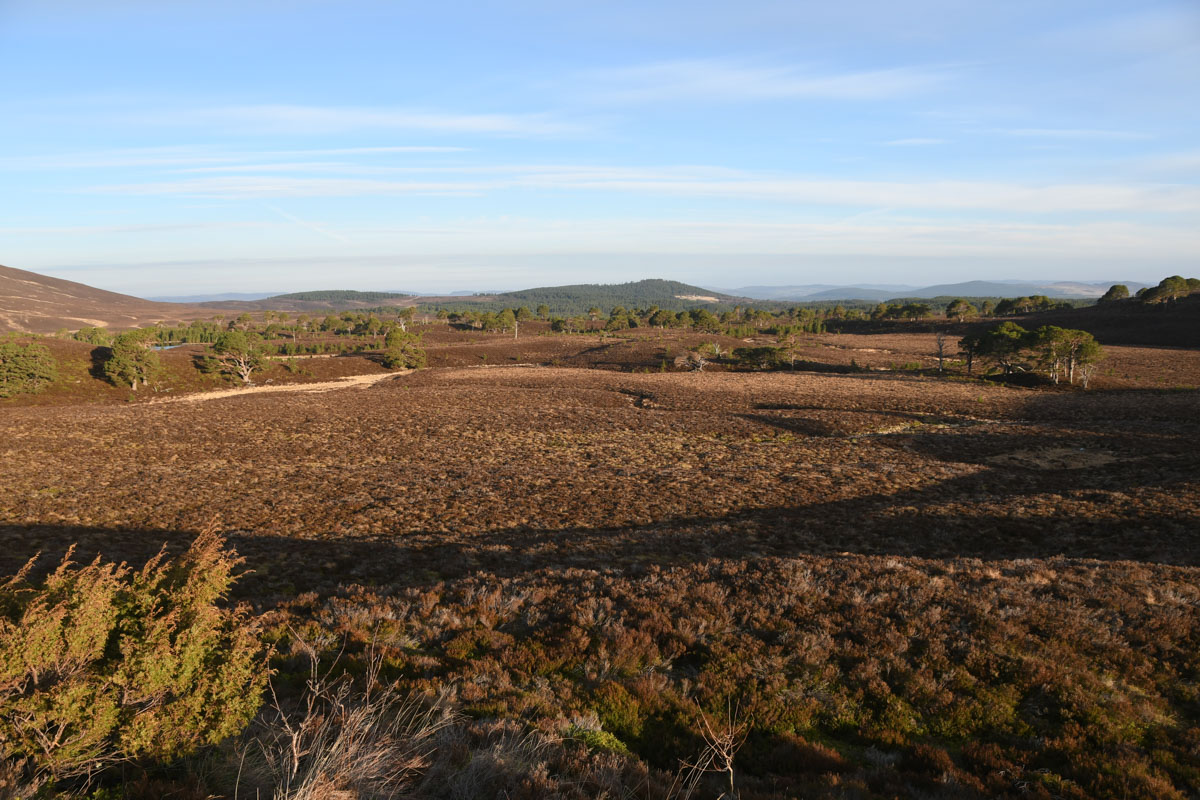 Bynack More is quite a decent distance, but it has such a fine path that the kilometres roll past quickly. We had hoped some Black Grouse might be around Ryvoan, but saw none.
We were soon heading uphill towards Bynack More. 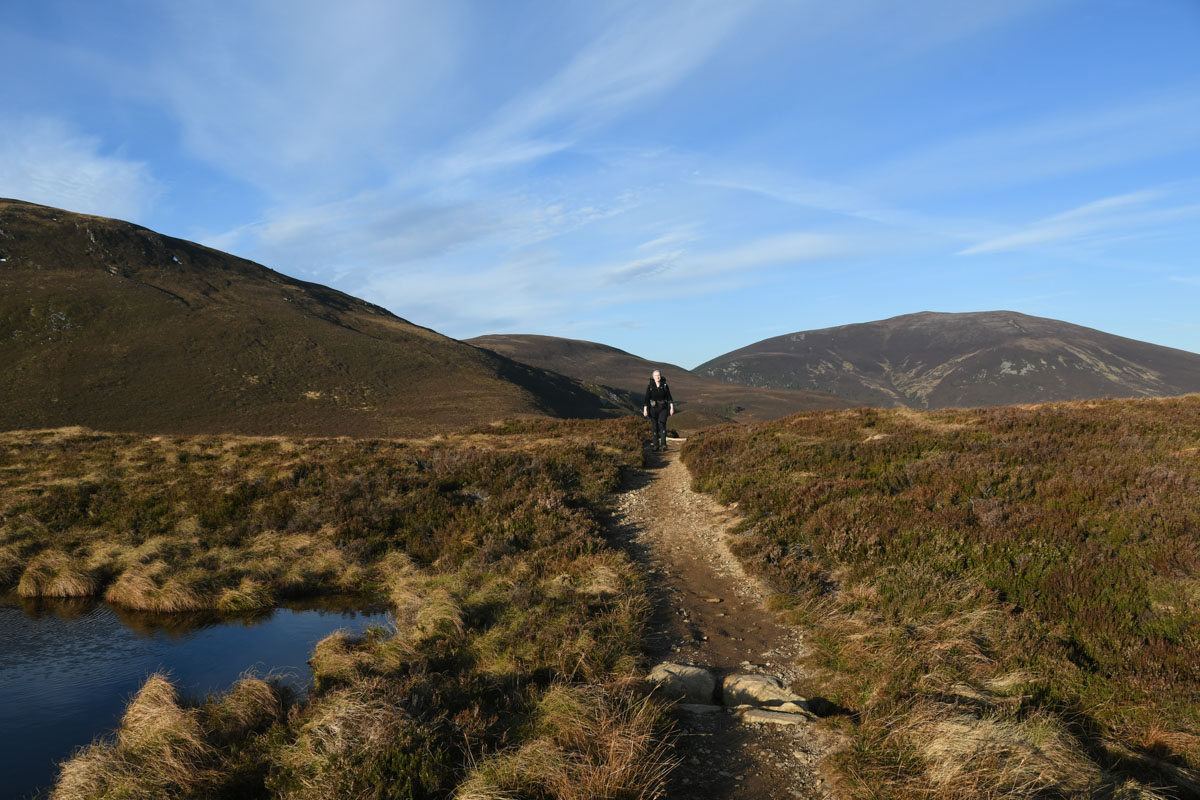 As the path heads up An Lurg the Corbett Meall a Buachaille is prominent. 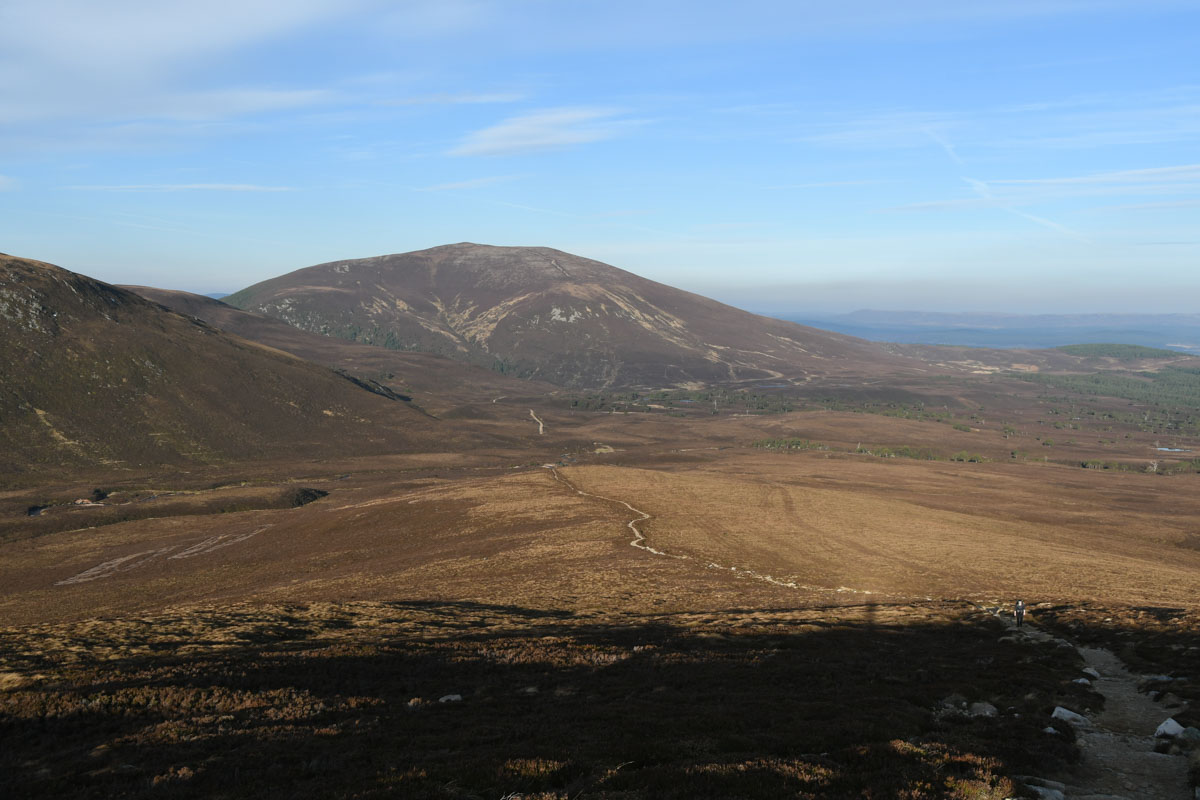 The sky and cloudscape across Strathnethy to Cnap Coire na Spreidhe was lovely. 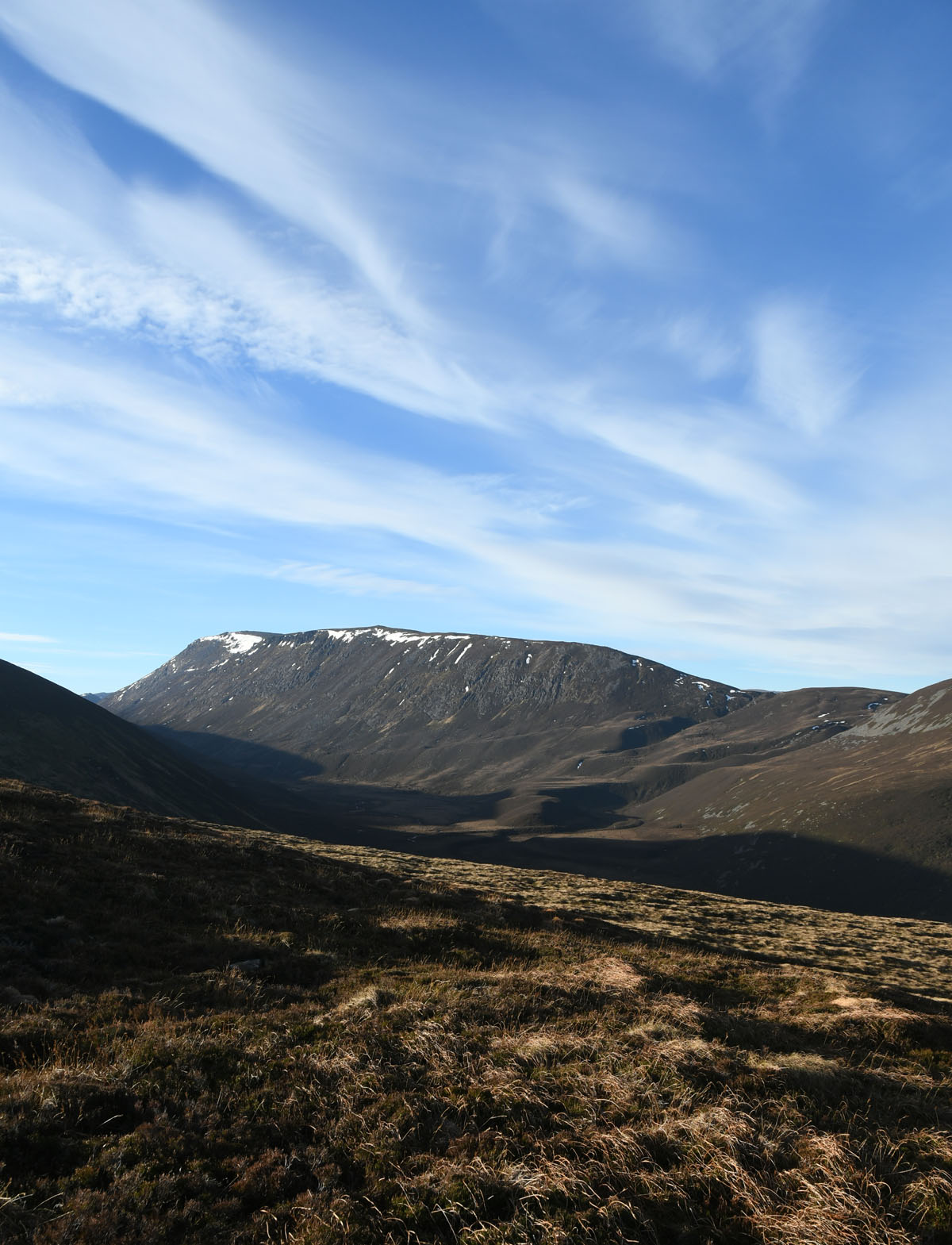 Reaching the 800m plateau to the north of Bynack More we were in the sun and it was hot enough to see us in T-shirts and summer trousers. Bonkers conditions for a munro in February. 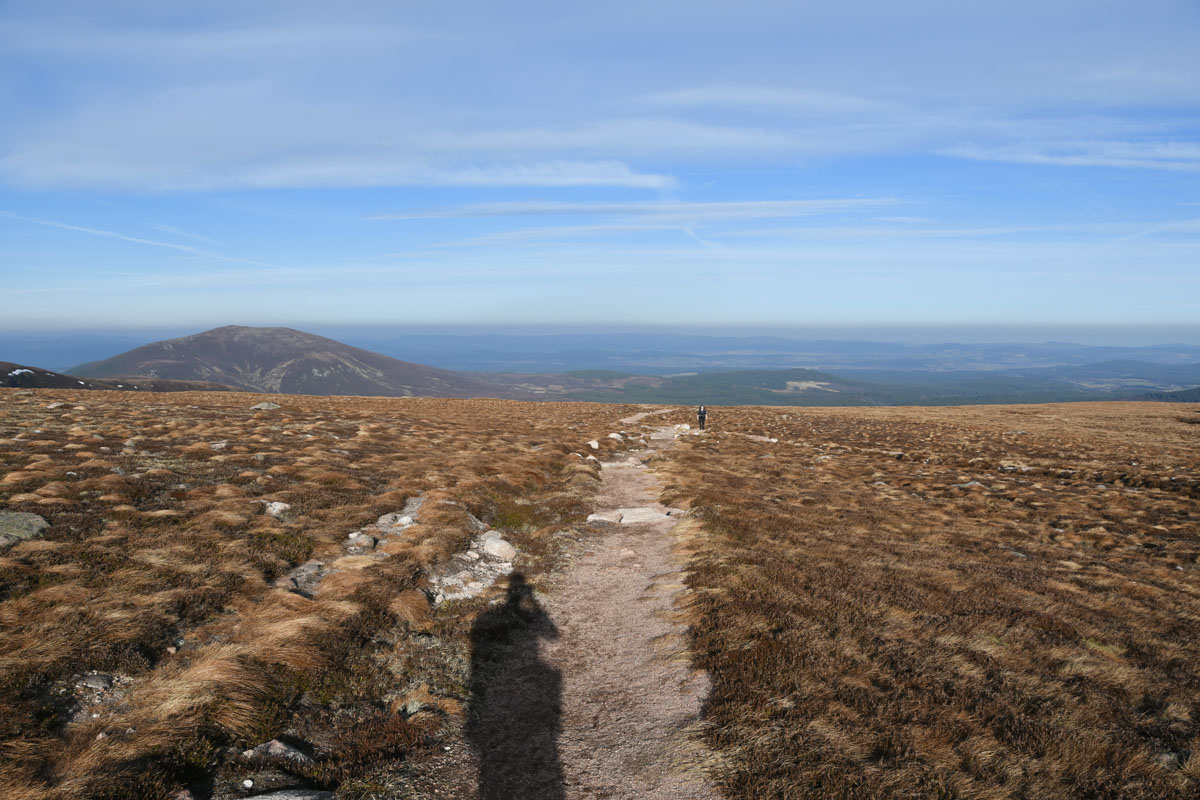 Just before the final ascent of Bynack More there’s a good view down Coire Dhuibh across Strathnethy to Stac na h-Iolaire. 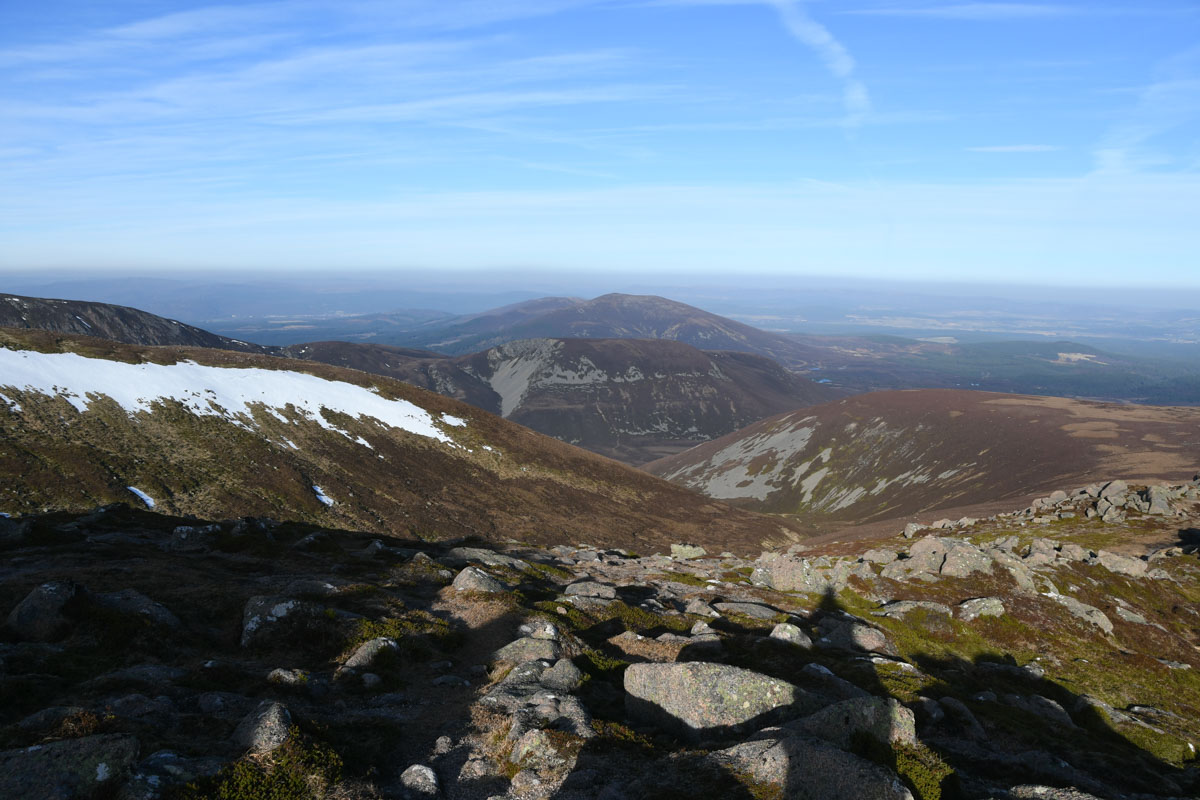 There were a few patches of snow on the NE side of the summit ridge – but you pretty much had to seek them out. 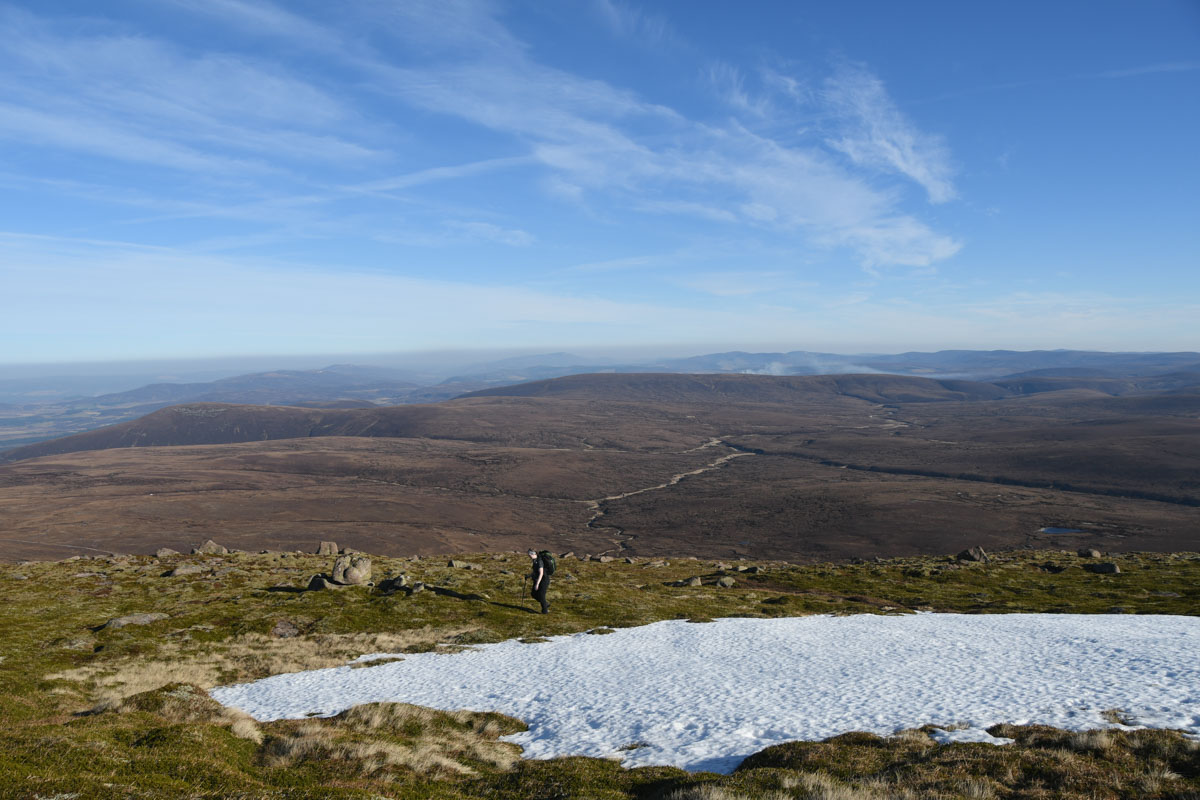 Across A’Choinneach the Central Plateau looms, a little more snow that way.

Across to the Central Plateau: 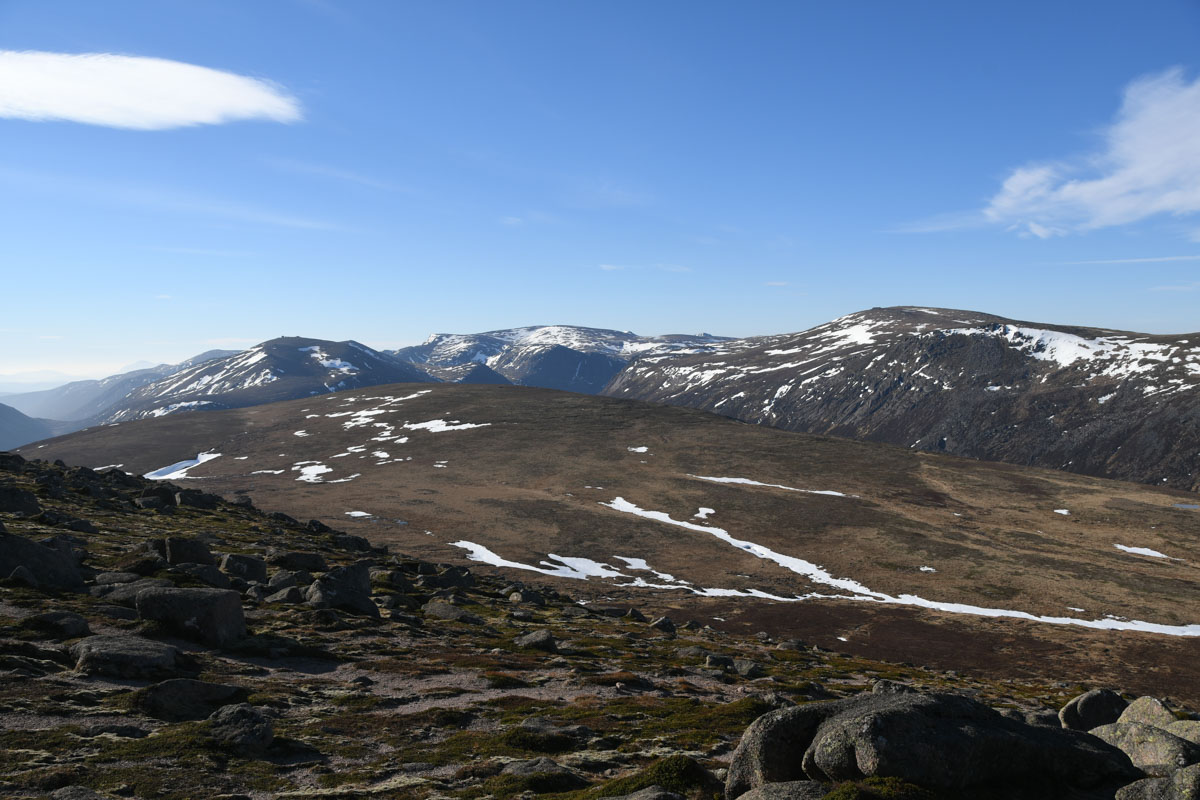 We headed down to the first of the tors south of the summit to sit out of the breeze and enjoy some food – disturbed a pair of ptarmigan who were hiding amongst the sandstone. 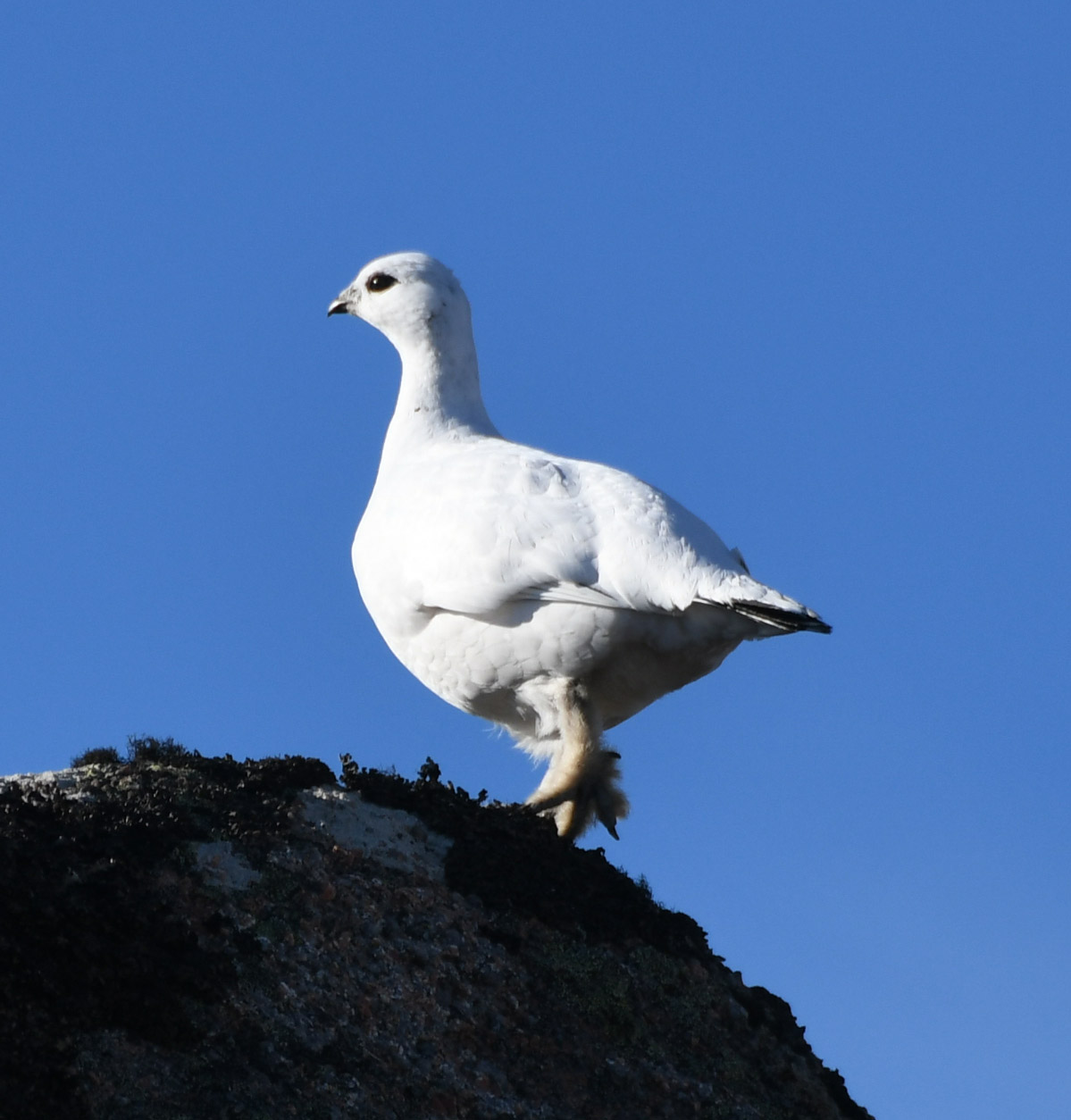 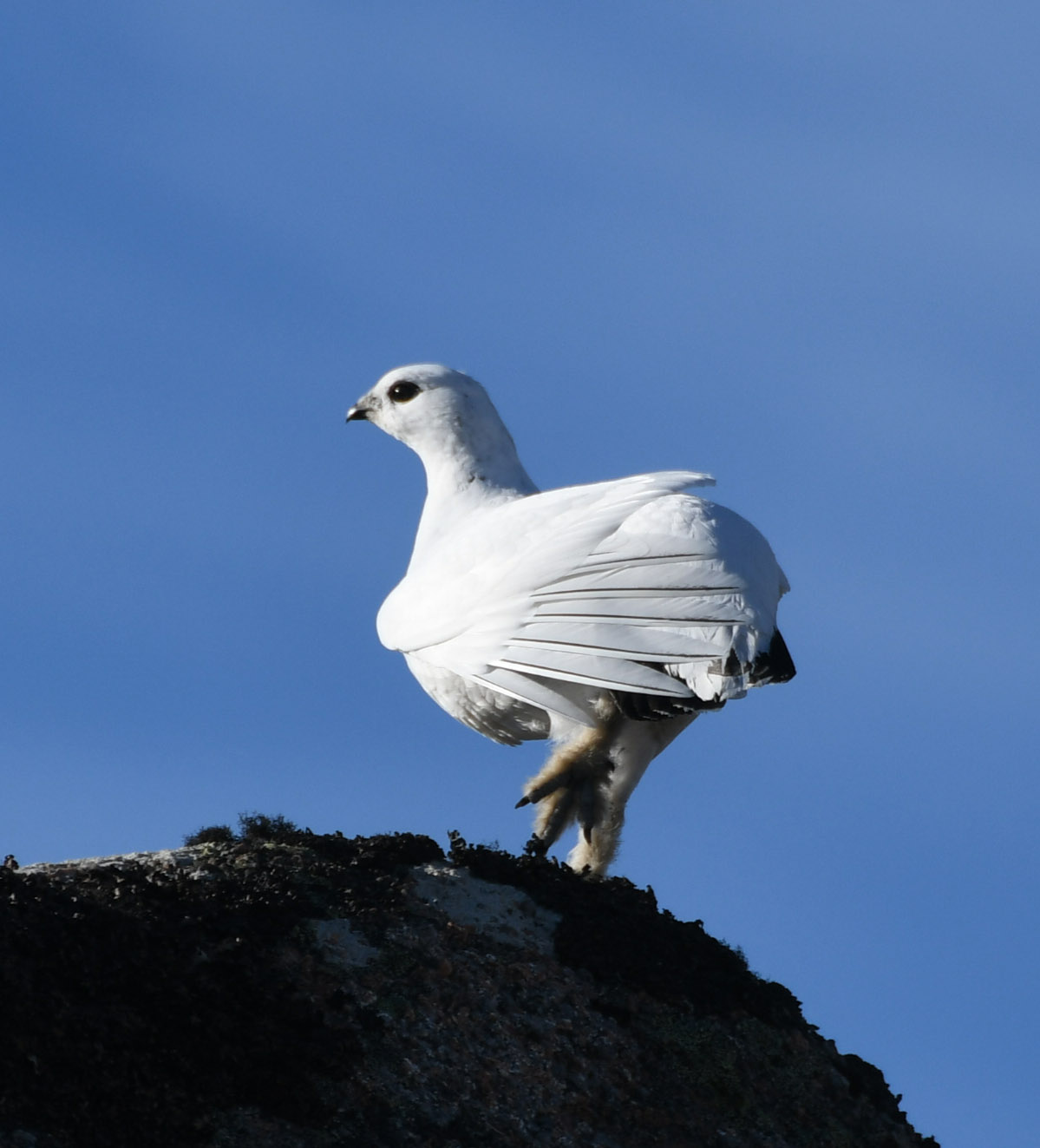 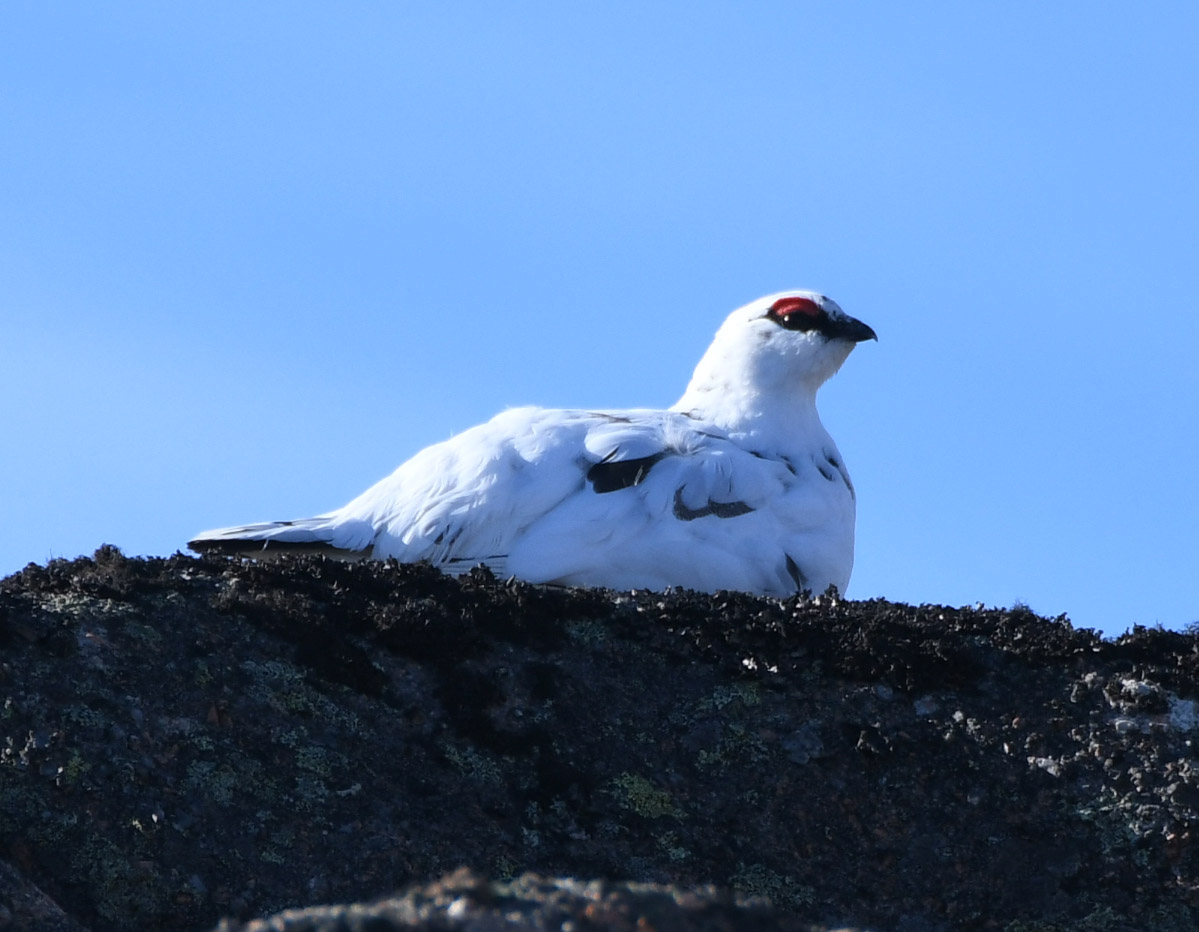 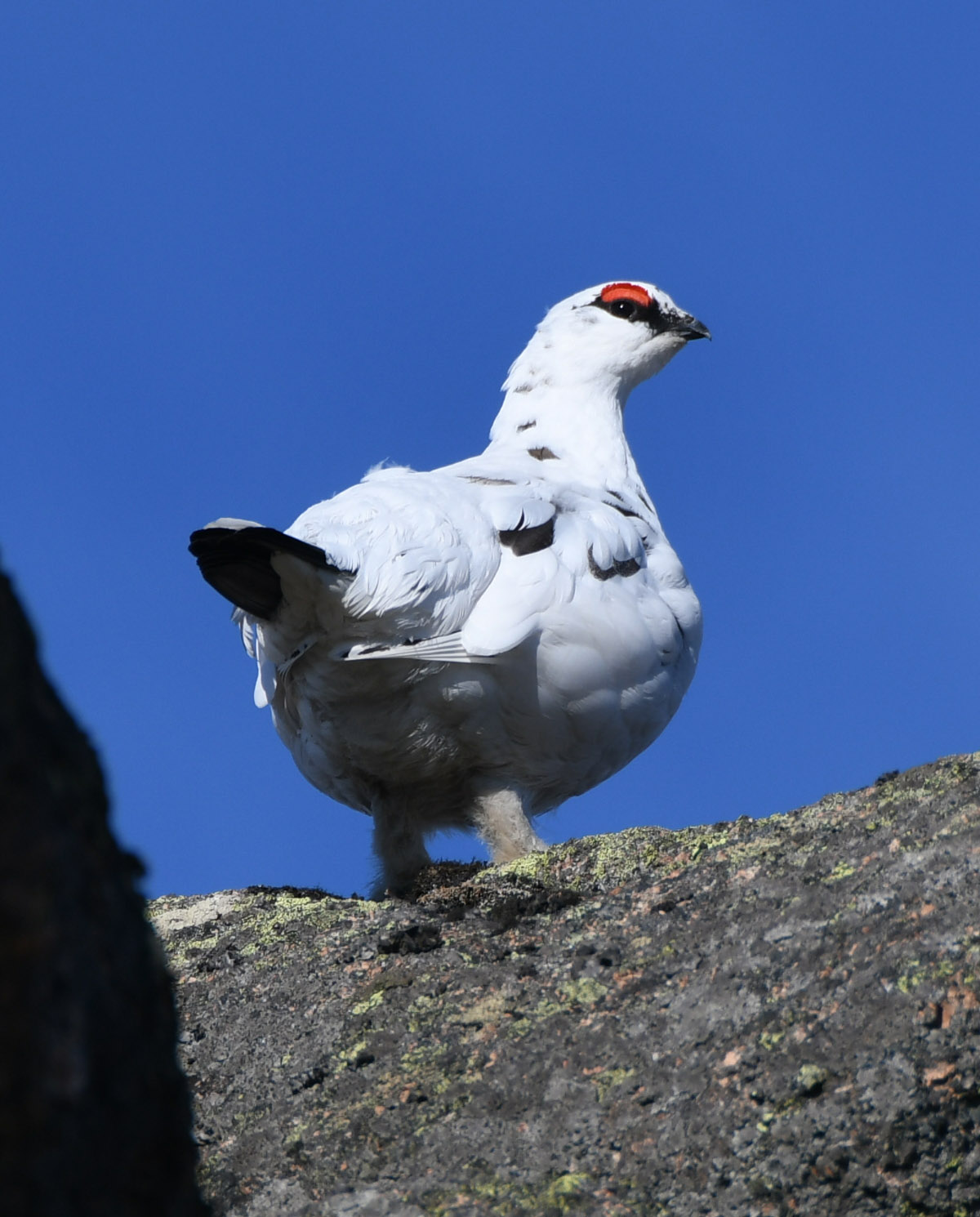 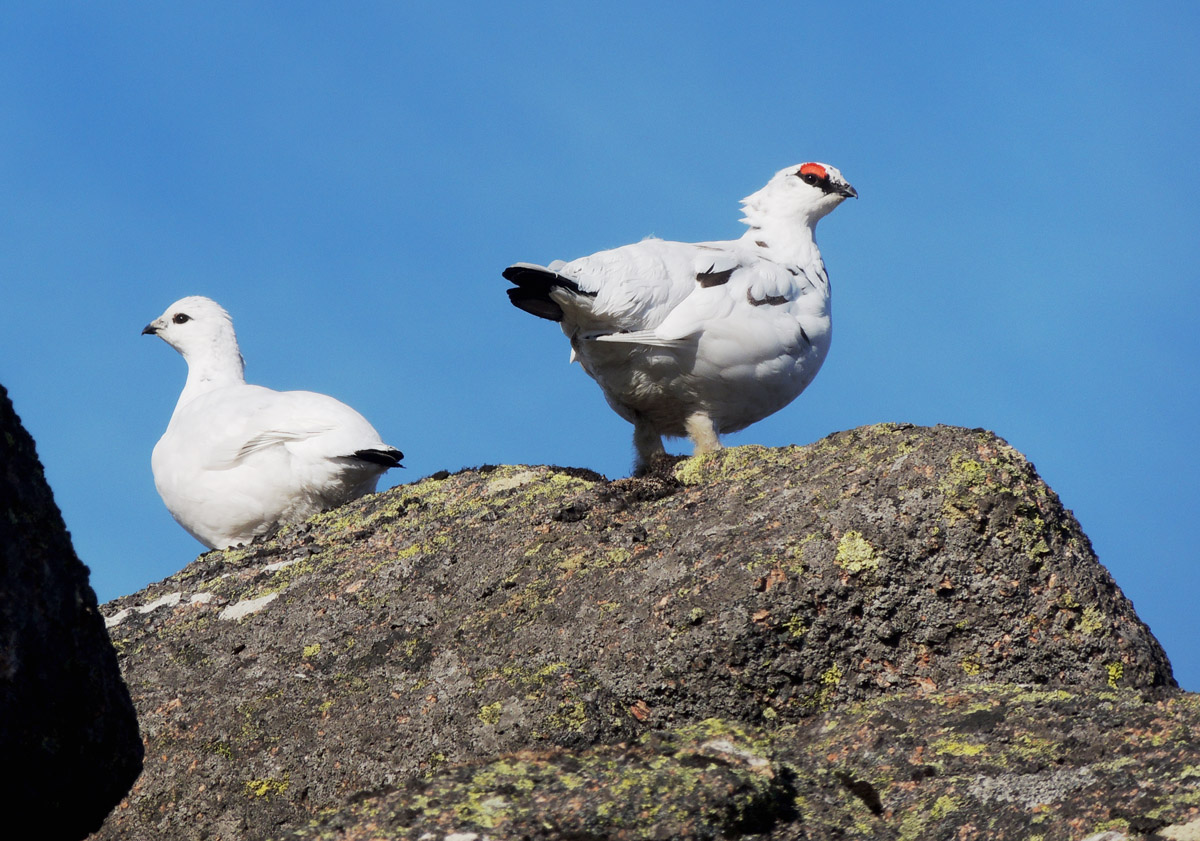 We’ve visited the Little Barns and the Barns of Bynack before – so we simply headed direct downhill towards A’Choinneach. 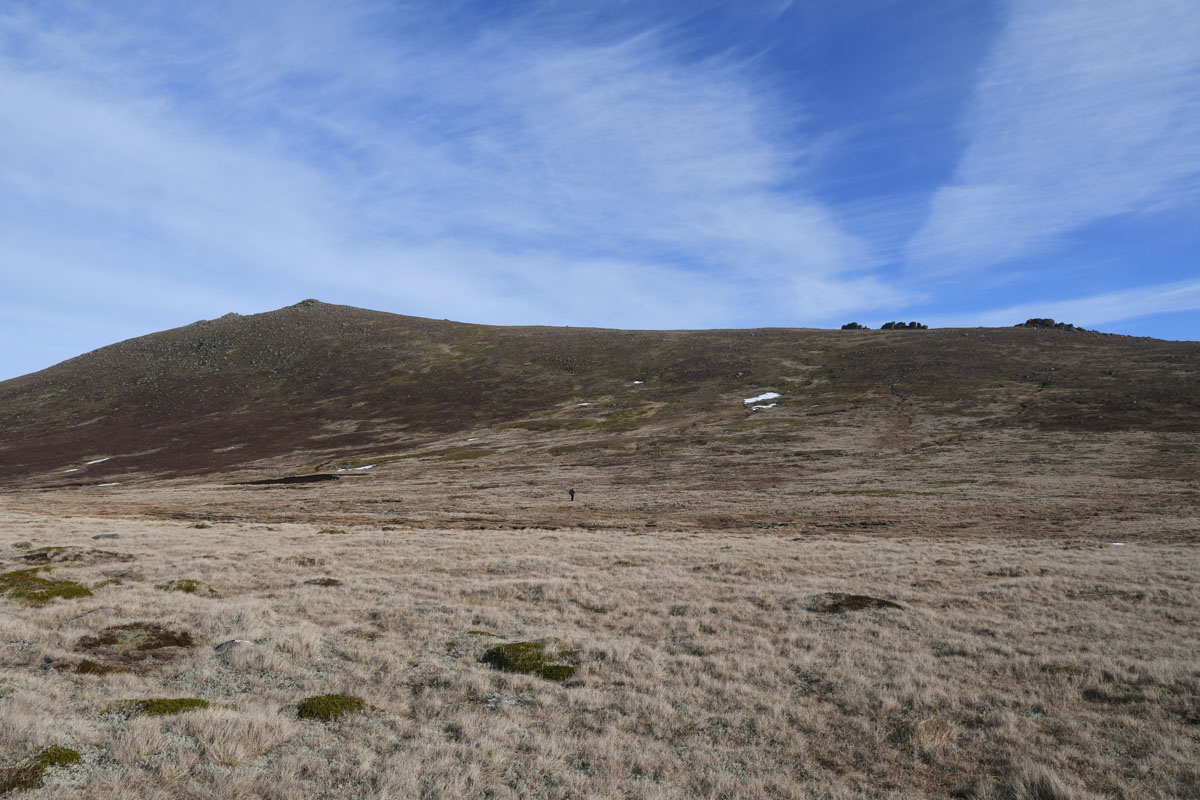 Once up A’Choinneach there was a nice view E across the northern arms of Beinn a Bhuird and Ben Avon – a reminder that we have a plan to loop these from Tomintoul again one of these days.

The Corbett Creag Mhor looks a wee bump below Bynack. 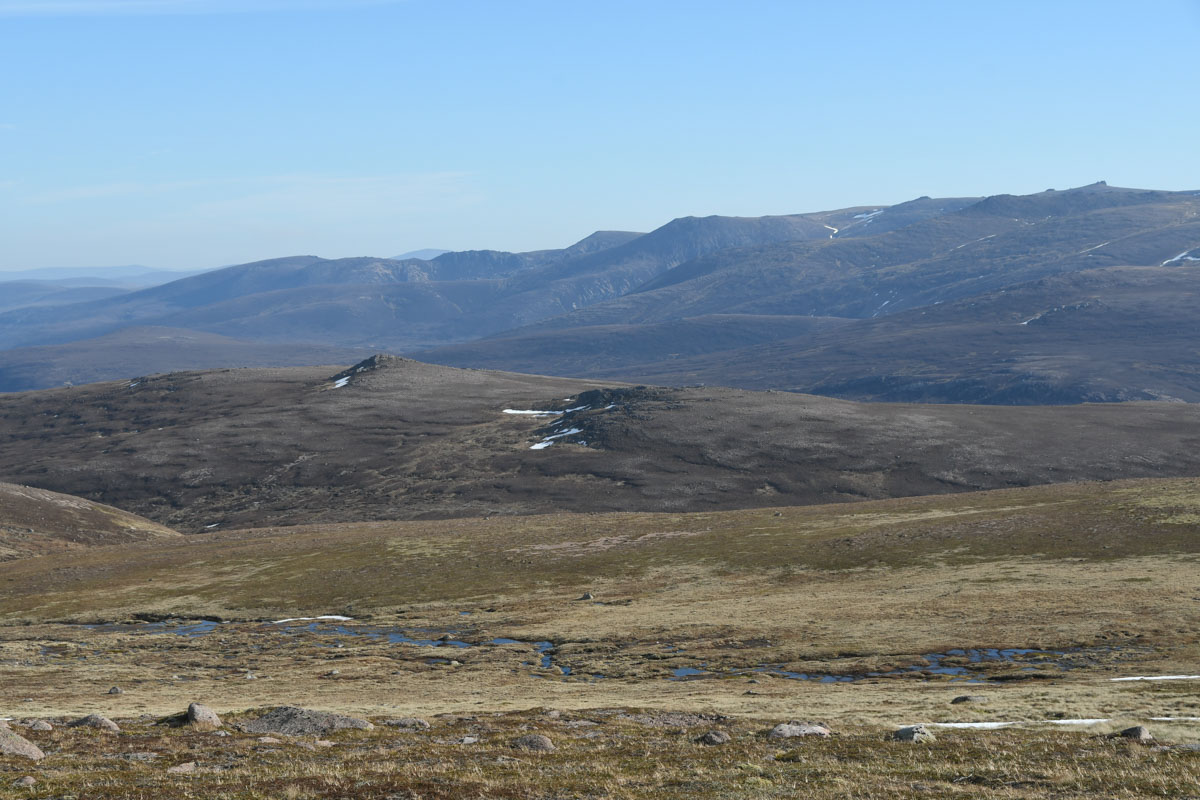 The drop from A’Choinneach to the Saddle has a rather nice aspect on Loch Avon and the Central Cairngorms. 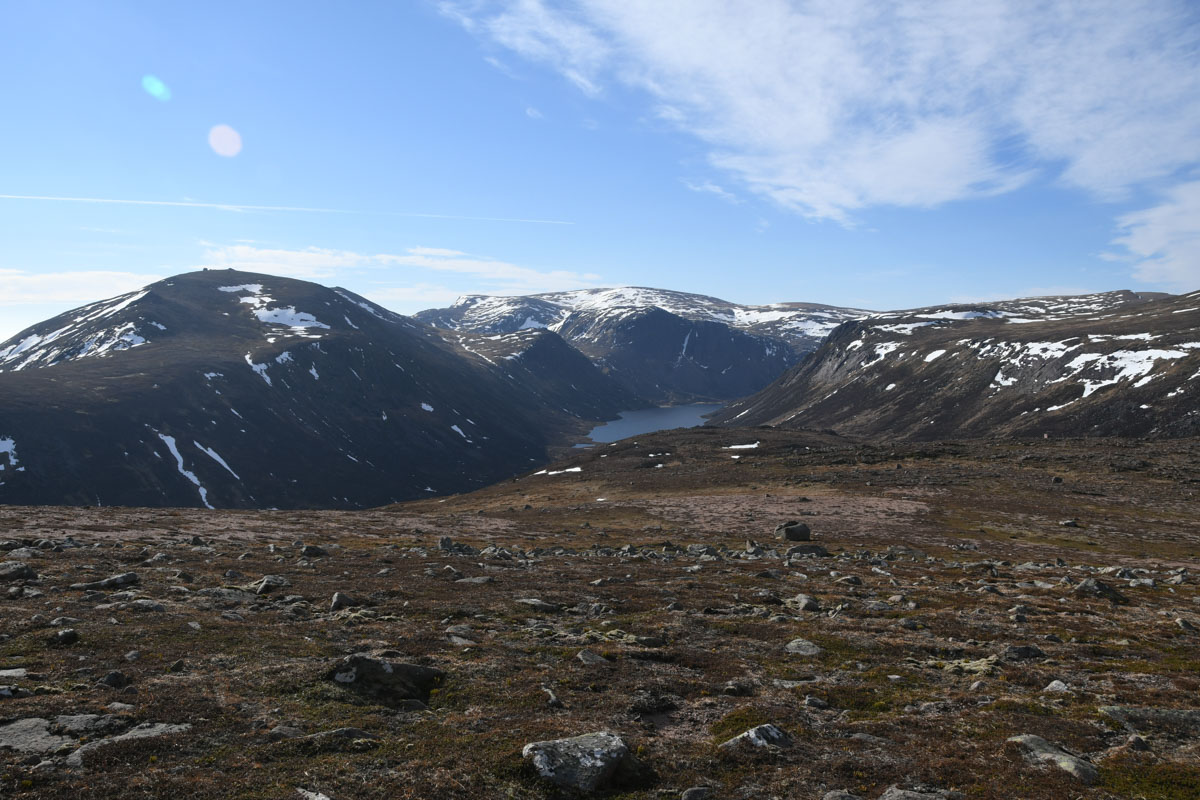 The ptarmigan looked ill at ease all day – camouflage which is often superb is a liability after such a thaw. 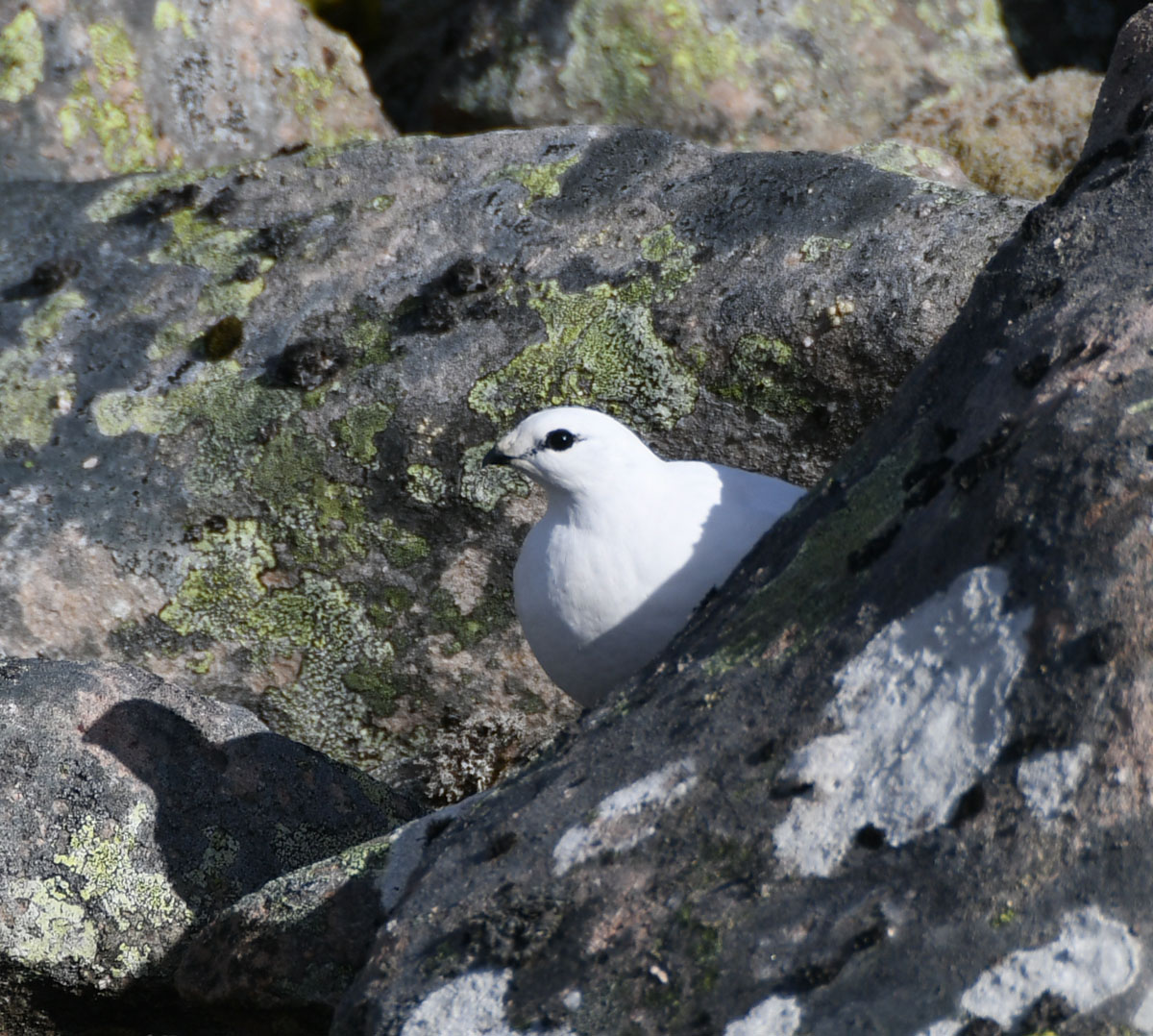 A little left of the path there are a few good viewpoints for Loch Avon and the surrounding crags. 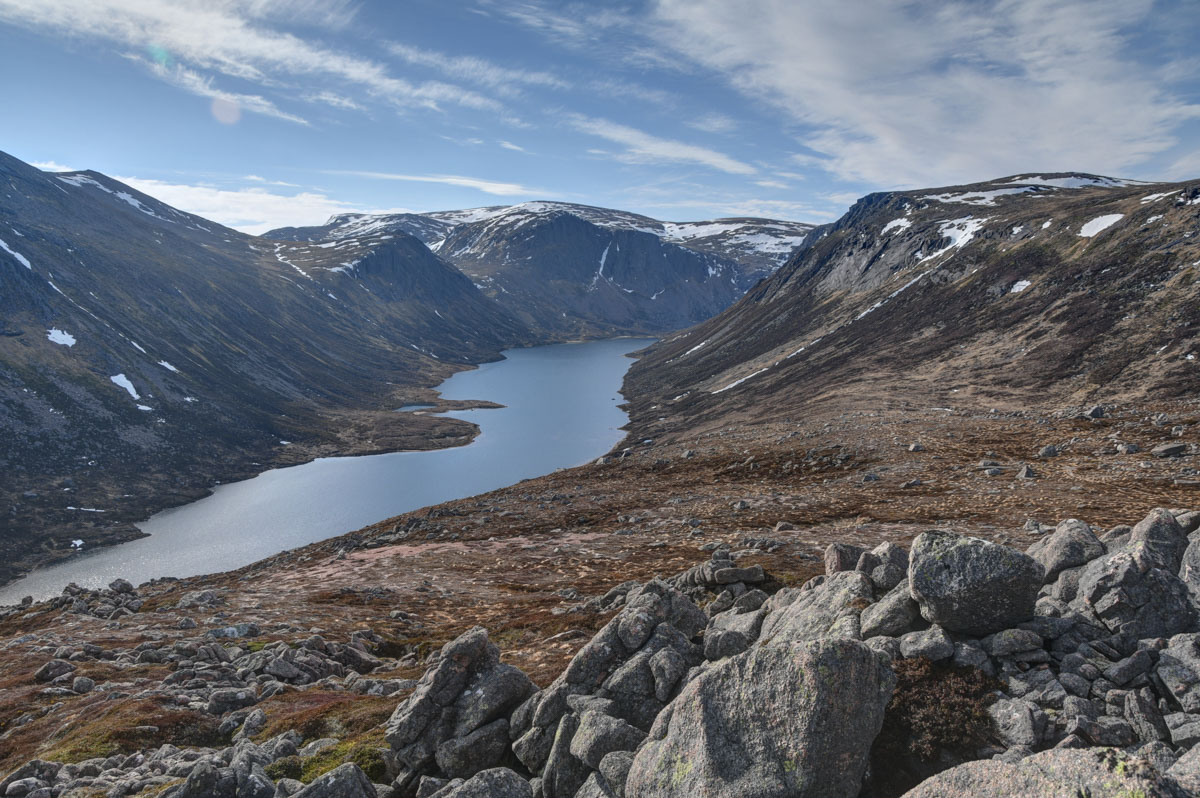 We crossed The Saddle and took the little path up to Ciste Mhearaid that we often use – this is a quiet way back up Cairngorm. Mnaged to find a couple of snow patches to put our feet in, but it was all avoidable. 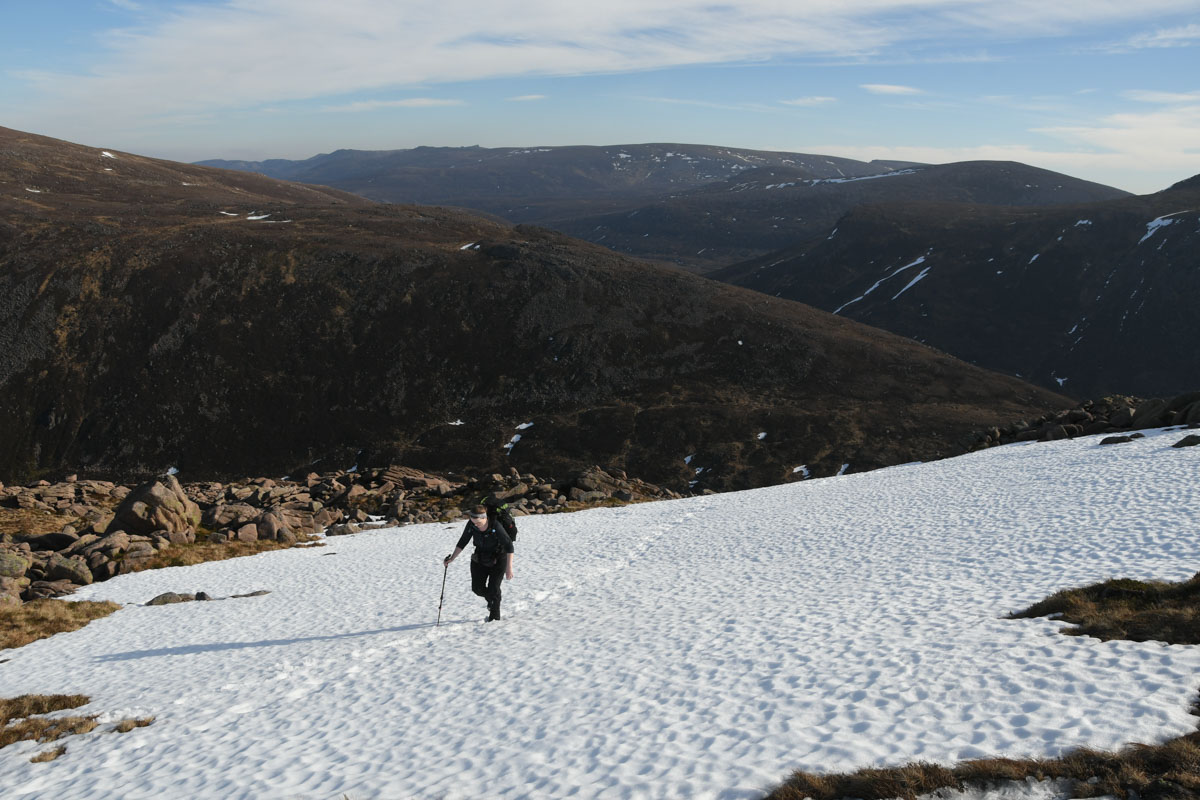 The snow holes around Ciste Mhearaid were still there – but it looked like late May. 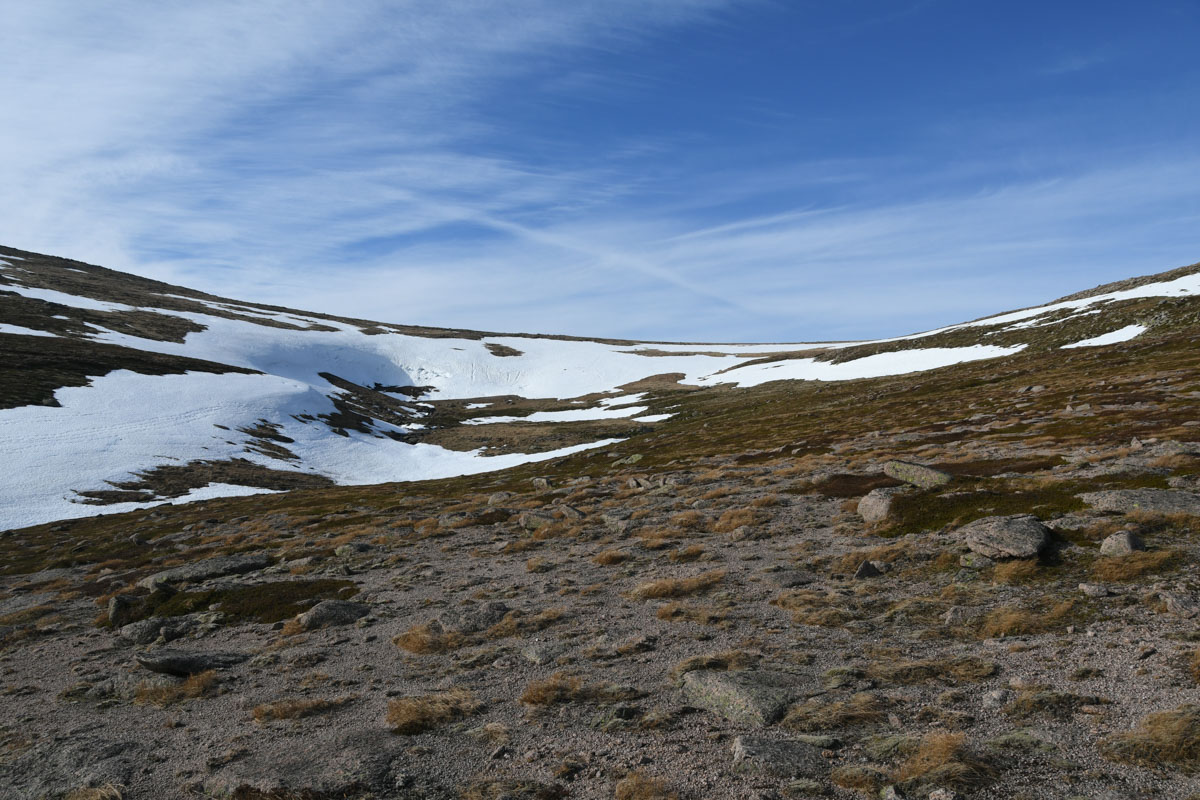 Nipped straight up Cnap Coire na Spreidhe and had lunch behind a sandstone outcrop. There was a decent view across to Loch Etchachan. 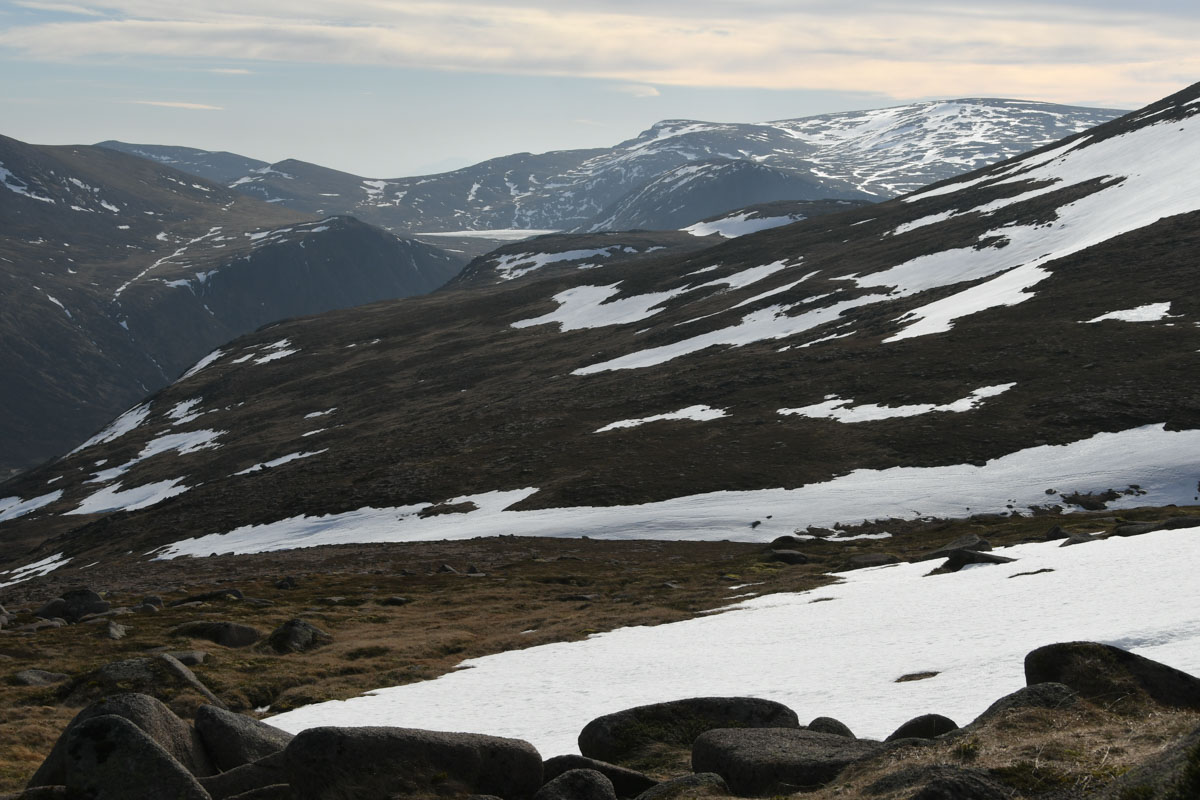 It was a hazy view north – the arm of Cairngorm that drops down from Cnap Coire na Spreidhe to Stac na h-Iolaire and Creag nan Gall is another favourite of ours. It’s a lovely wee route up or down, but neglected by the crowds. 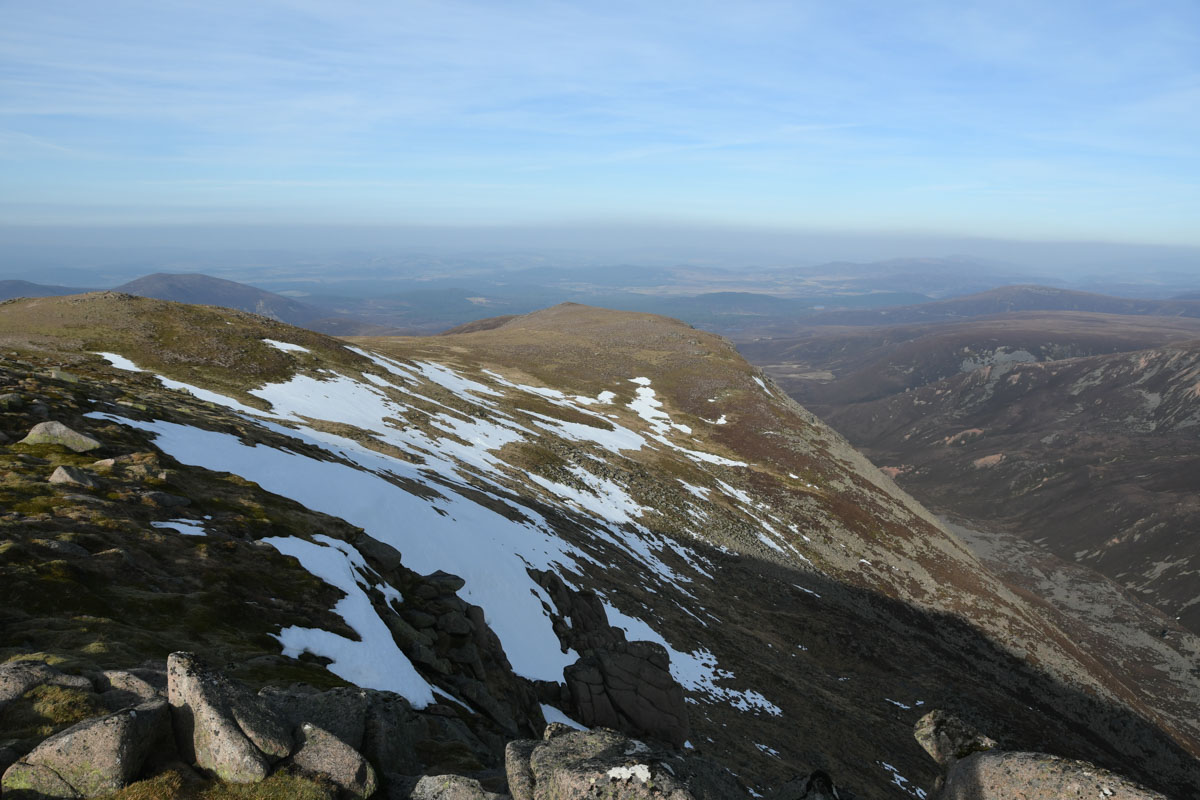 I was reminded to finally have a close look for El Alamein, we’ve found St Valery before and I knew approximately where El Alamein was located. Finally spotted it. 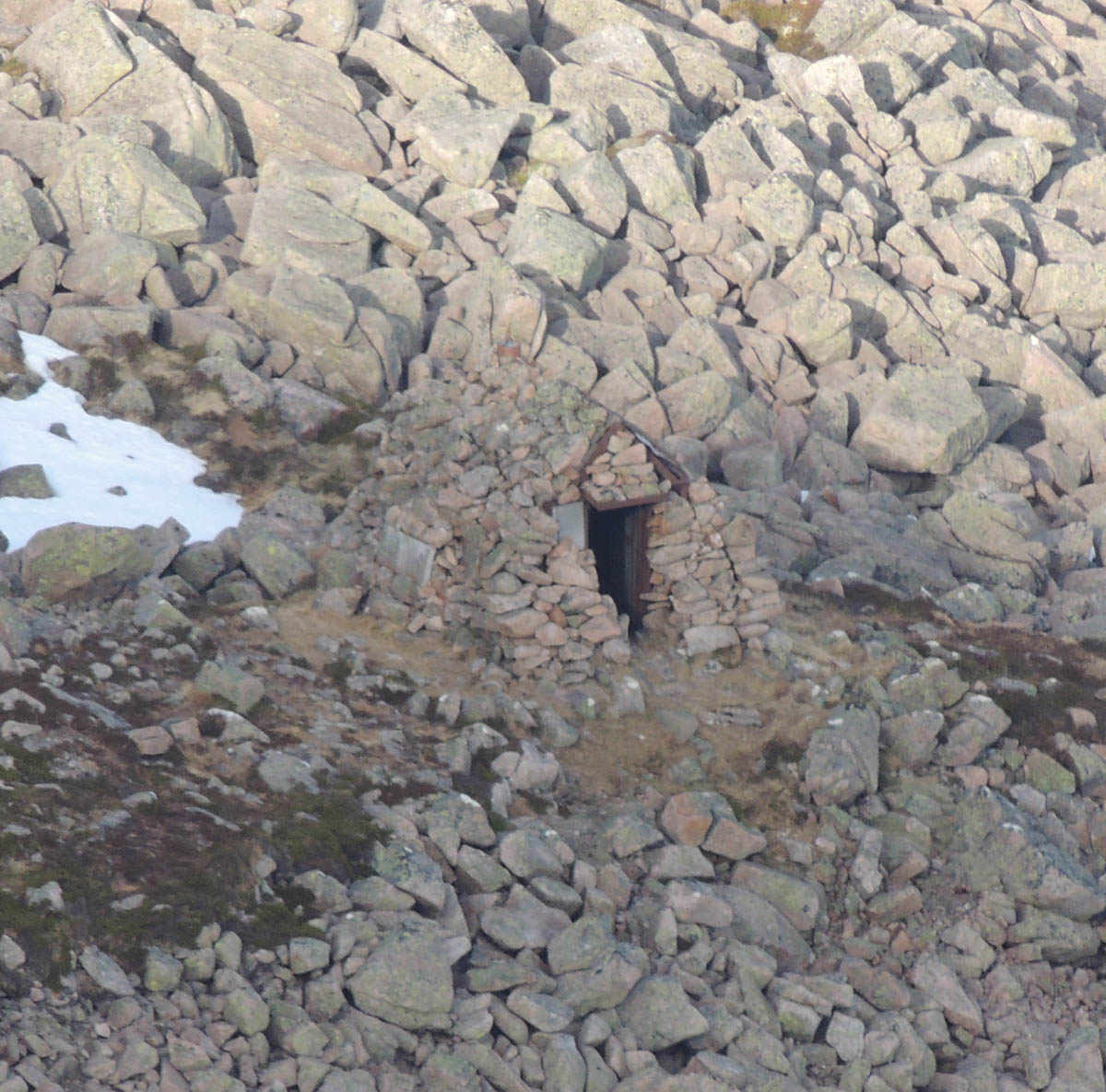 We dropped down to the 1028m point above Coire Laogh Mor and Strathnethy and then onwards towards Stac na h-Iolaire. It was rather hazy. 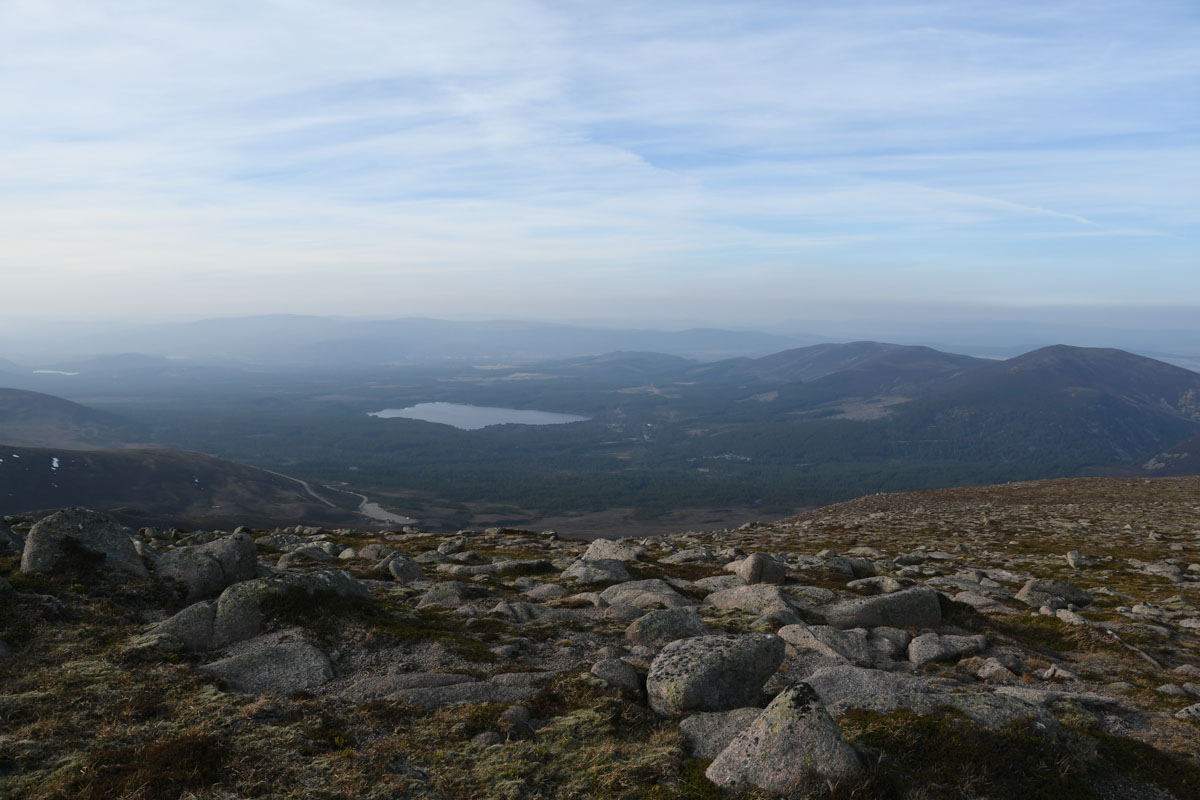 As we descended I heard an unusual noise – the rather unimpressive yipping of a Golden Eagle. Rarely vocal, this isn’t a call we’ve heard often. Looked around to spot first one, then a second Goldie heading towards Stac na h-Iolaire. We rarely see these in the ‘Gorms – always a welcome sight.

Heading downhill we managed to spot one of the Goldies on a perch over Strath Nethy. 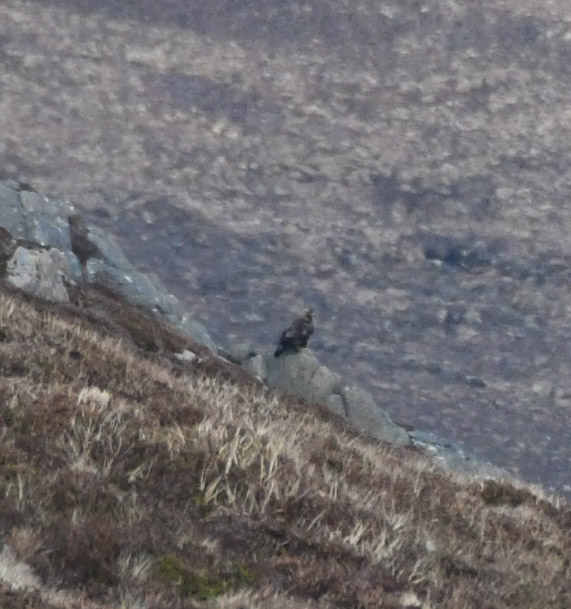 Across the Strath Coire Dhuibh of Bynack was looking good. 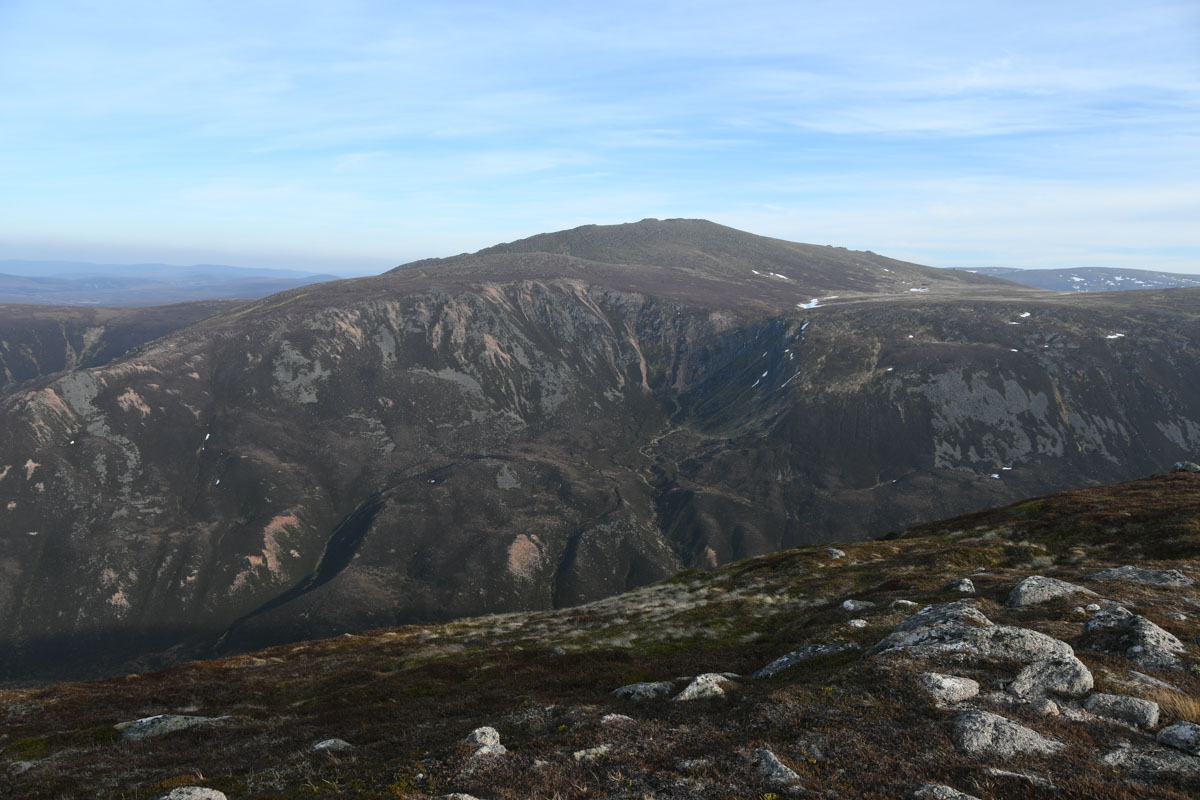 Stac na h-Iolaire is a rather attractive point on this complex ridge – we’ve been up it a few times before and it’s well worth a visit. 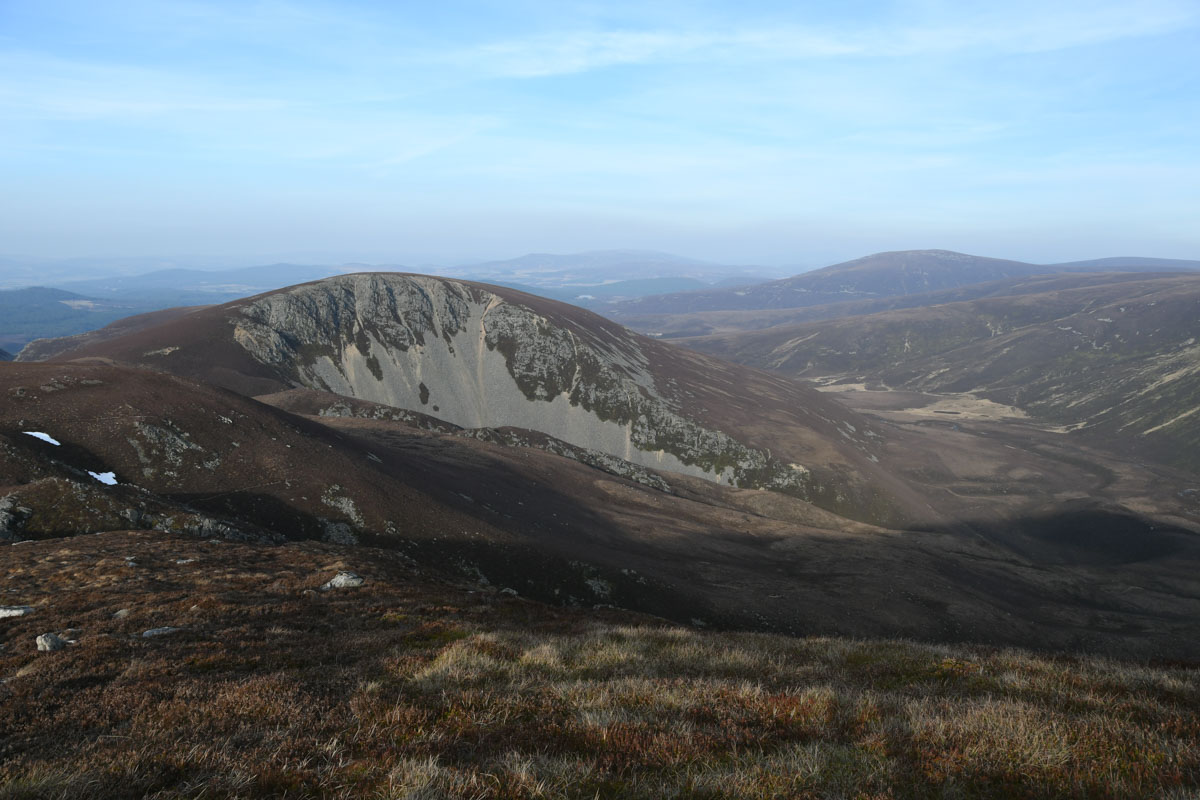 With the day getting on we dropped off the ridge to follow a sketchy path through the heather to the SW side of Creag nan Gall. 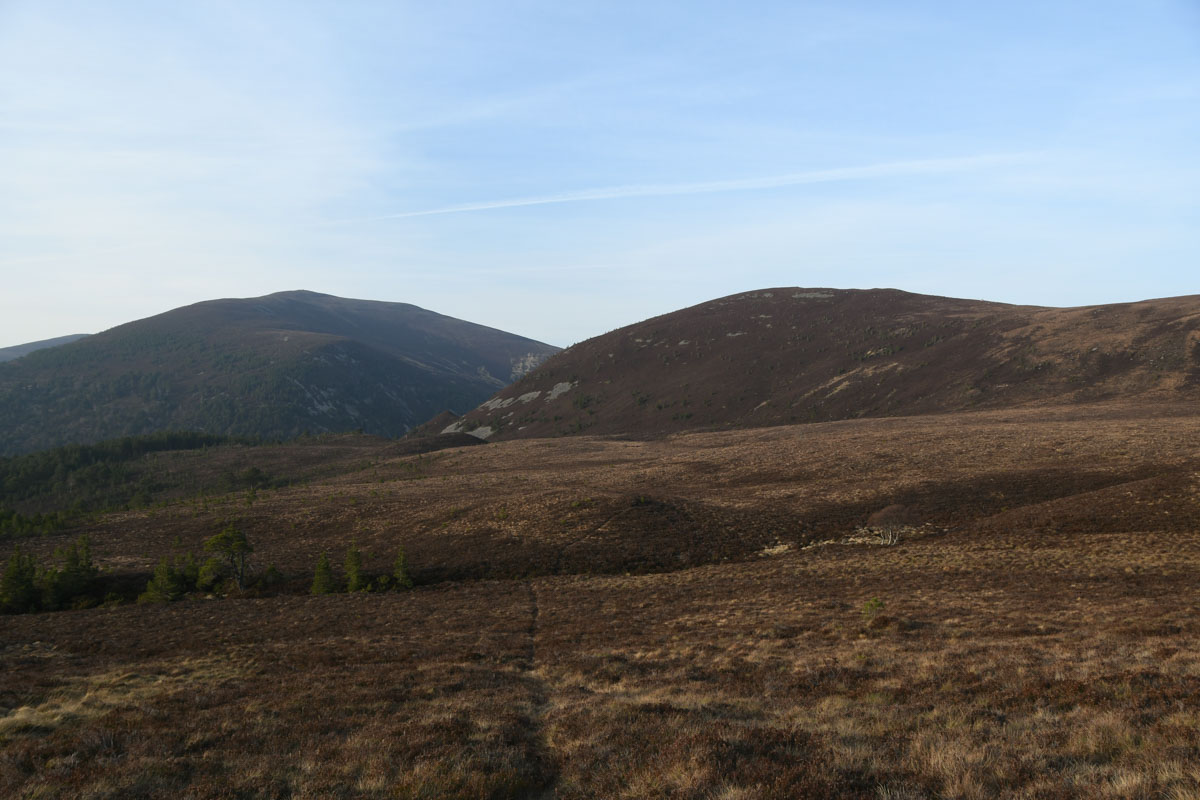 We’d noted a path on the OS map dropping down to the path through Ryvoan. Unfortunately we didn’t find it and a rather unpleasant overly steep through the woods (disturbing 2 hen Black Grouse) followed.

Safely to the path it was a quick yomp back to the car……still don’t have a good way down from this quiet area. Further route planning needed.

I like this loop, for me Bynack needs an add on for a decent day.