March has been a bit irksome – high winds and pretty patchy weather. Saturday looked a semi-decent day, albeit with continuing winds.

Decided to chase the best sunshine and head to the Angus Glens. Parked in the Glen Doll car park and headed for Cairn Broadlands.

There’s a track then a path directly up from Acharn Farm which takes you through the forestry under Cairn Broadlands and Craig Mellon. An old, well-formed stalkers path runs up The Ought to Cairn Broadlands. 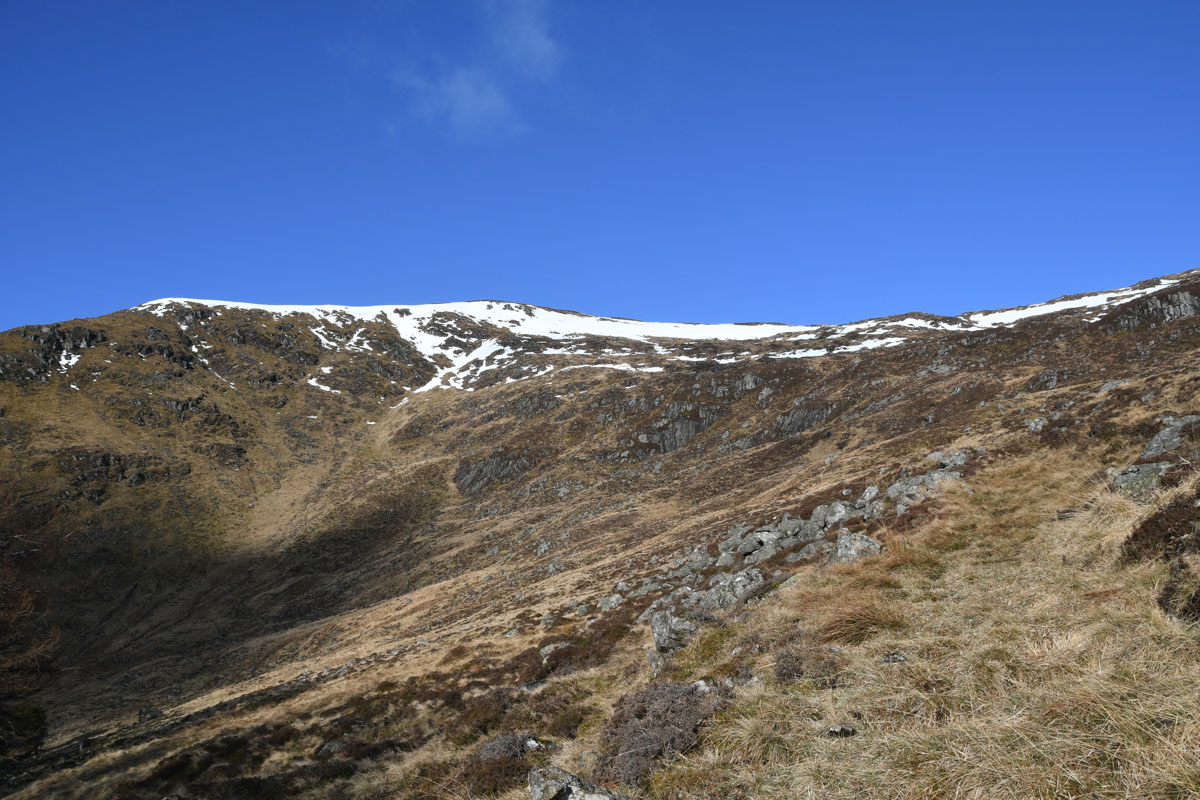 This is a quiet little route and we ambled along uphill, across the glen the majority of foot traffic would be on the route to Mayar and Dreish, up Corrie Fee and the Shank of Drumfollow. 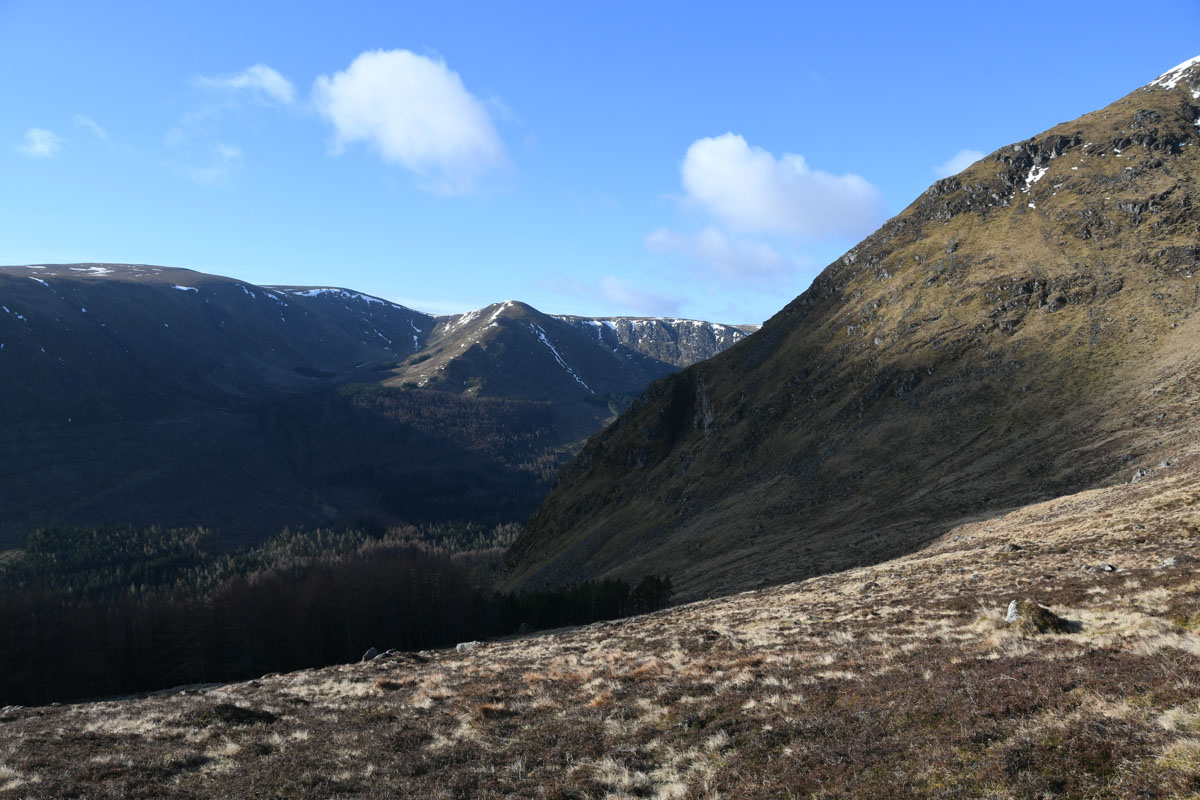 The terrain was a bit frosty – early frog activity had not ended well…. 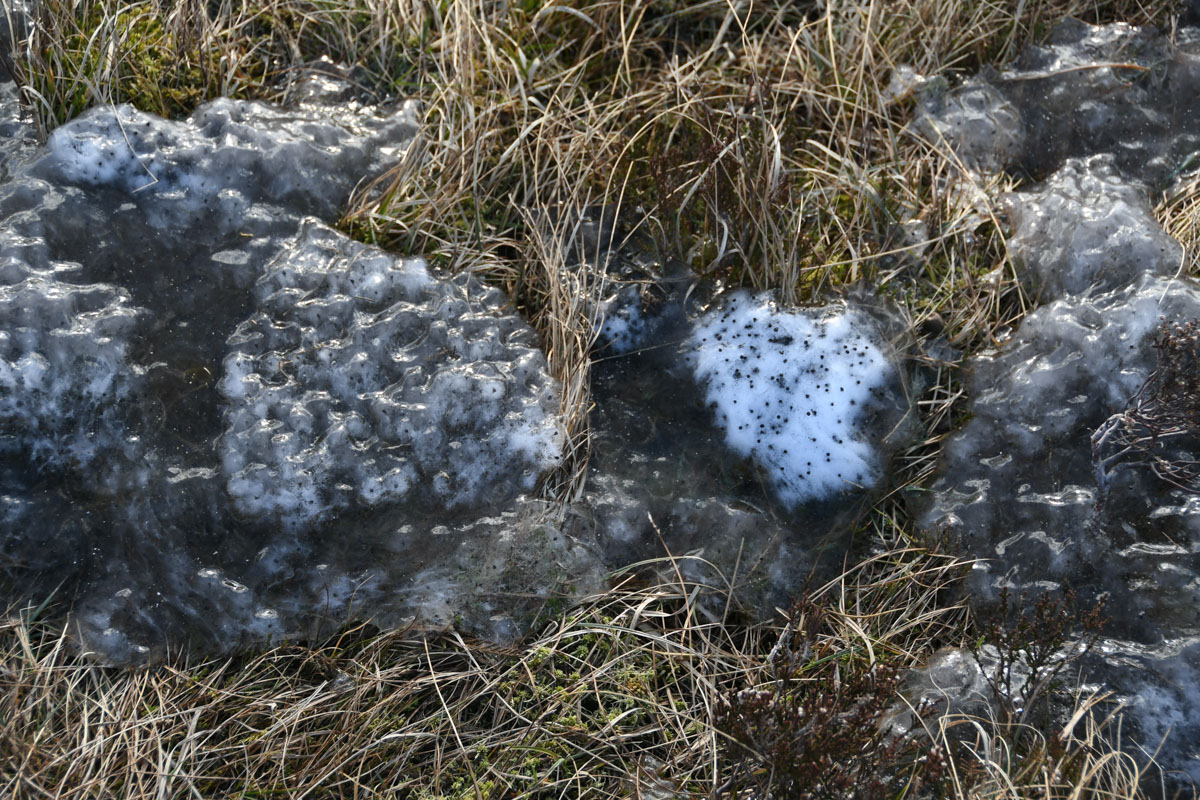 We cut off the stalkers path near the top of Cairn Broadlands to avoid a hard snow patch (it wasn’t worth taking out ice axes and crampons for although we were tempted just for fun).

Once up on Cairn Broadlands we were exposed to a fairly stiff, very cold breeze. To the north Lochnagar is a little bland looking. 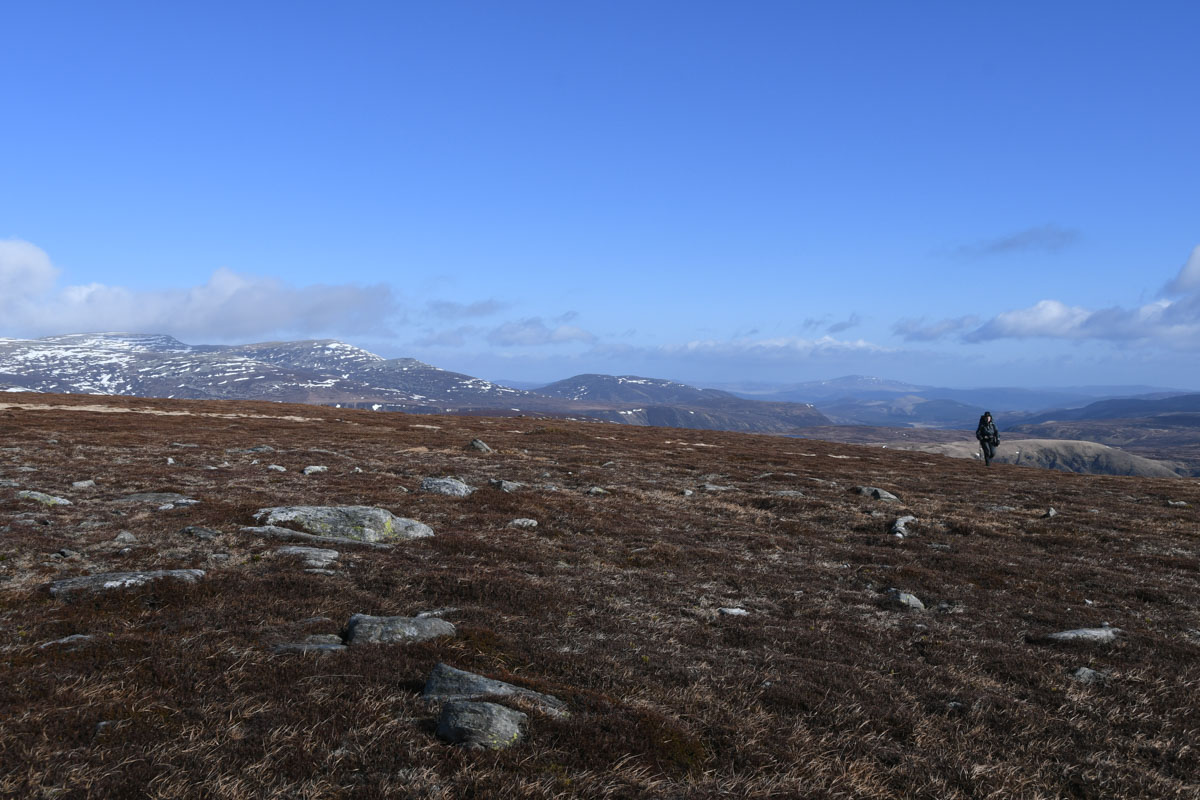 The Mounth are is a high tableland, carved with deep cliff-lined glens. Most popular routes pass over direct routes to munros avoiding the great views from the edges of coires and glens.

We could just see the ski tows over on Glas Maol.

Across to Glas Maol: 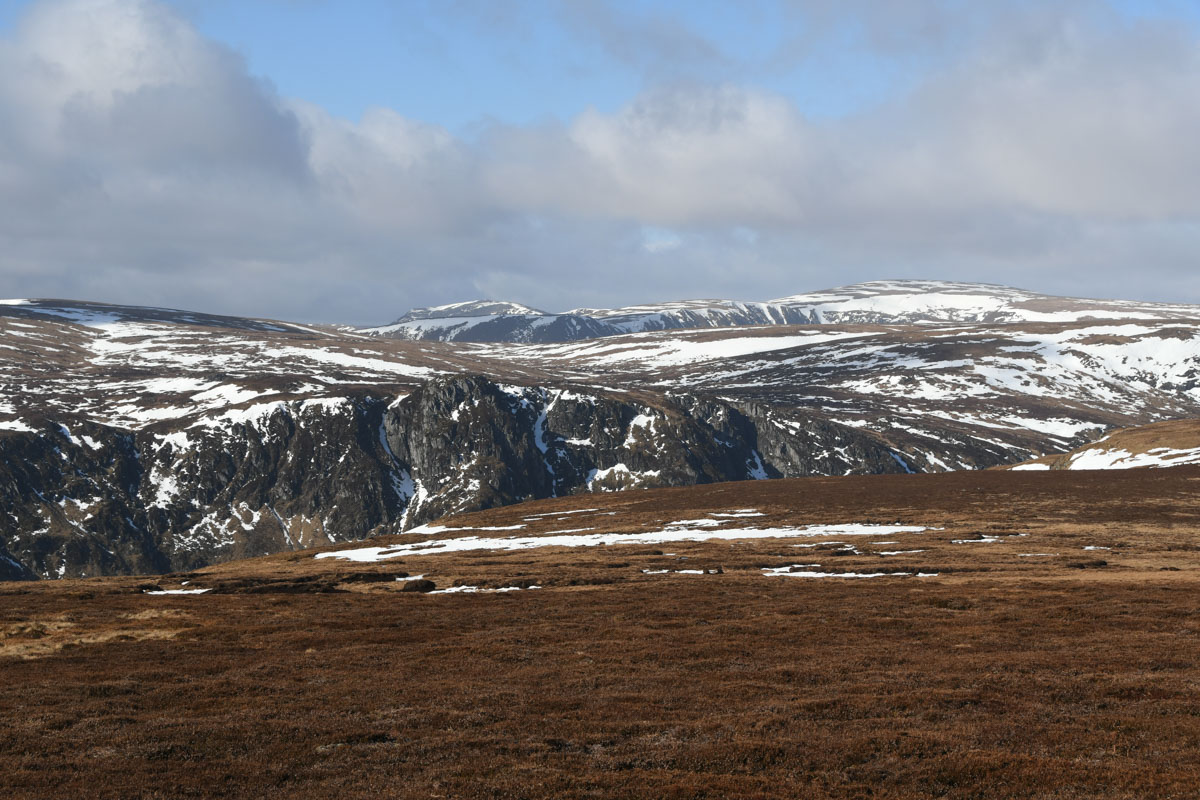 We wandered from Cairn Broadlands over to Cairn Damff, walking direct into the cold wind was rather bracing.

Over at Cairn Damff we saw a few hares, still in their winter coats. 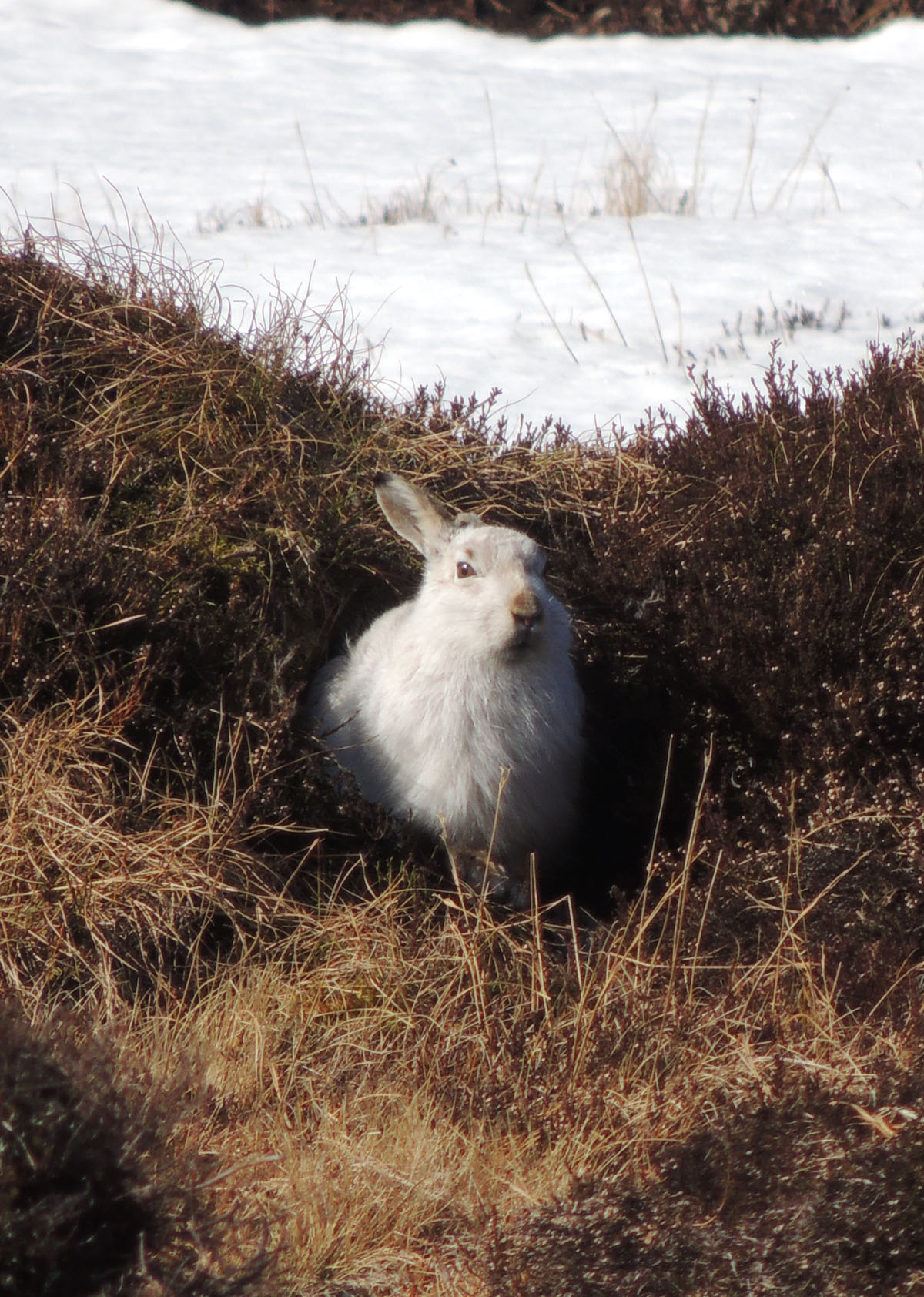 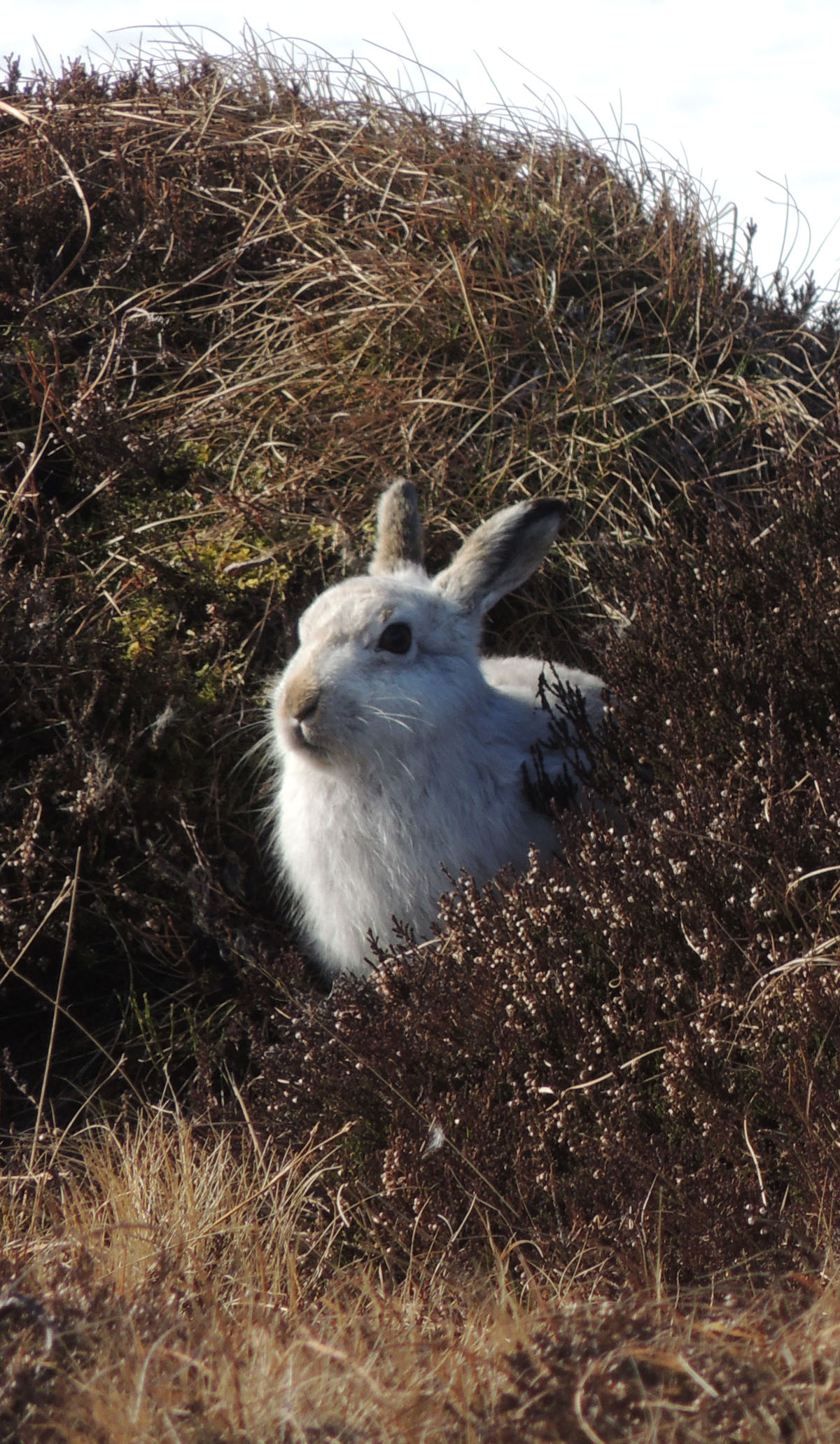 Approaching the top of Cairn Damff we found a slope that was well wind sheltered. Sat and soaked up the palpable warmth of the sun and had a bite to eat. Spring is definitely in the air.

Got up to carry on – we have on occasion headed up the Crow Craigies and beyond to Tolmount from here before, but this time we decided to drop out of the wind to a bit of glen walking. 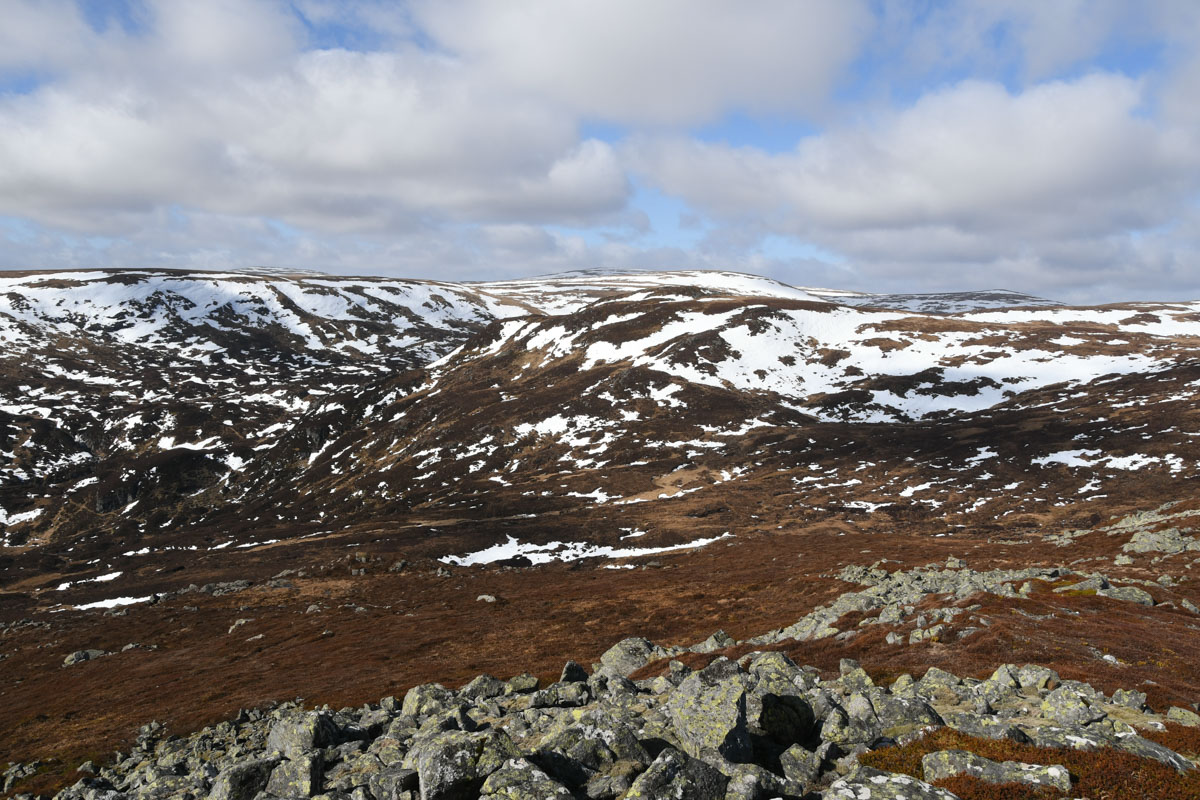 Dropped off Cairn Damff and then ascended Craigs of Loch Esk – from there the path down Glittering Skellies passes just to the north.

Down in Loch Esk there were 30 Whooper Swans resting on the shores. They have good eyesight….they were in the water the moment we set downhill towards them from almost 1km away. 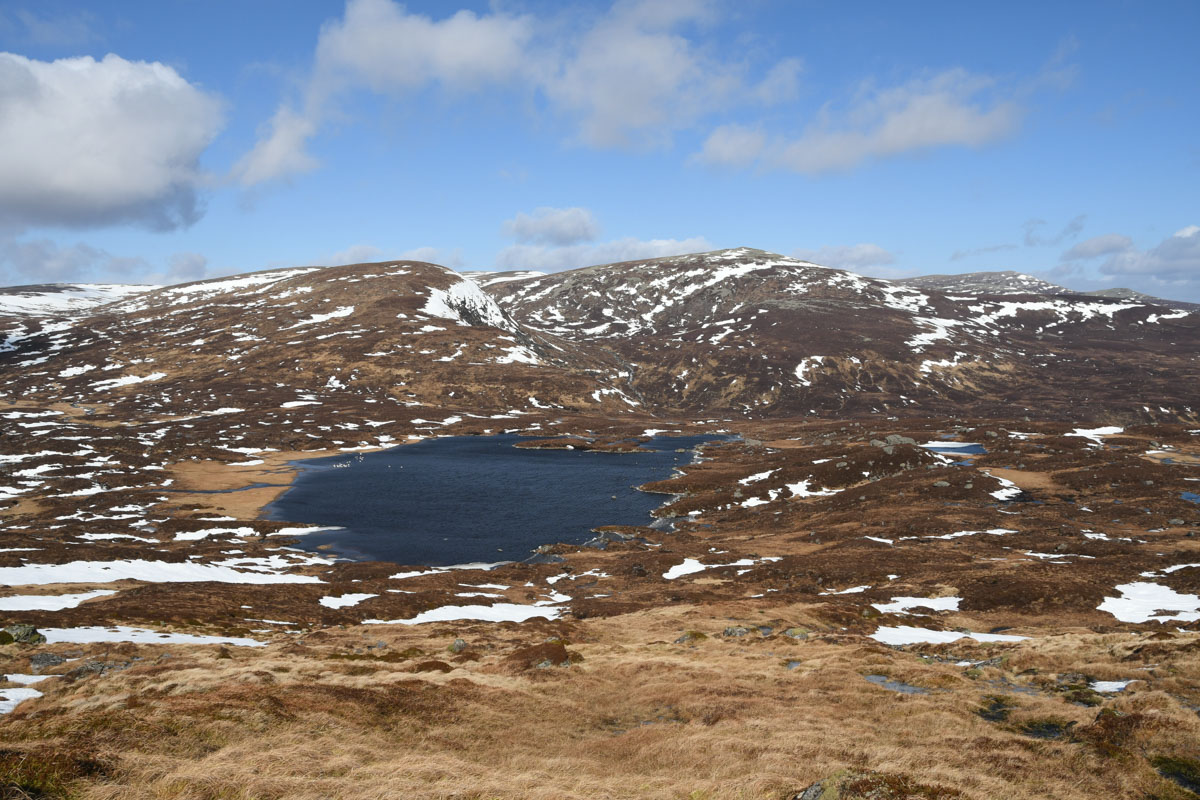 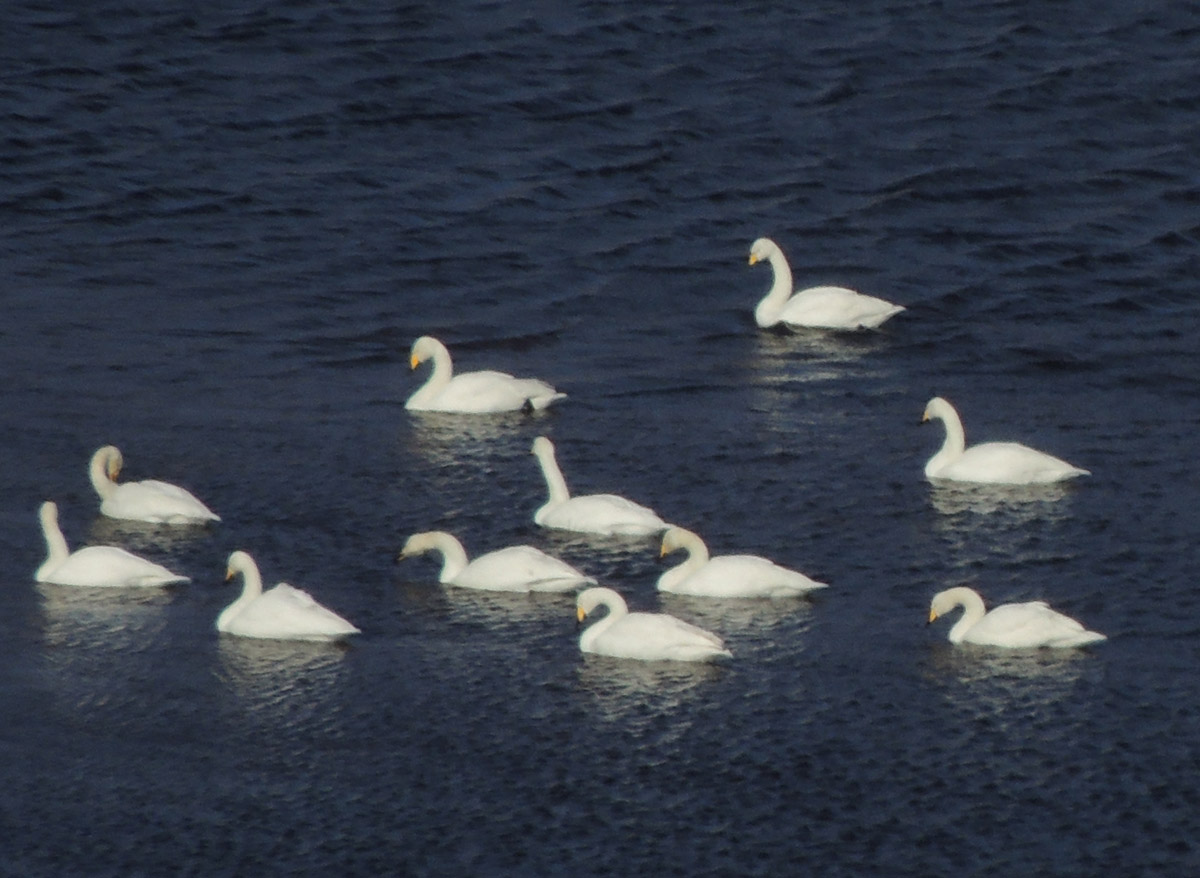 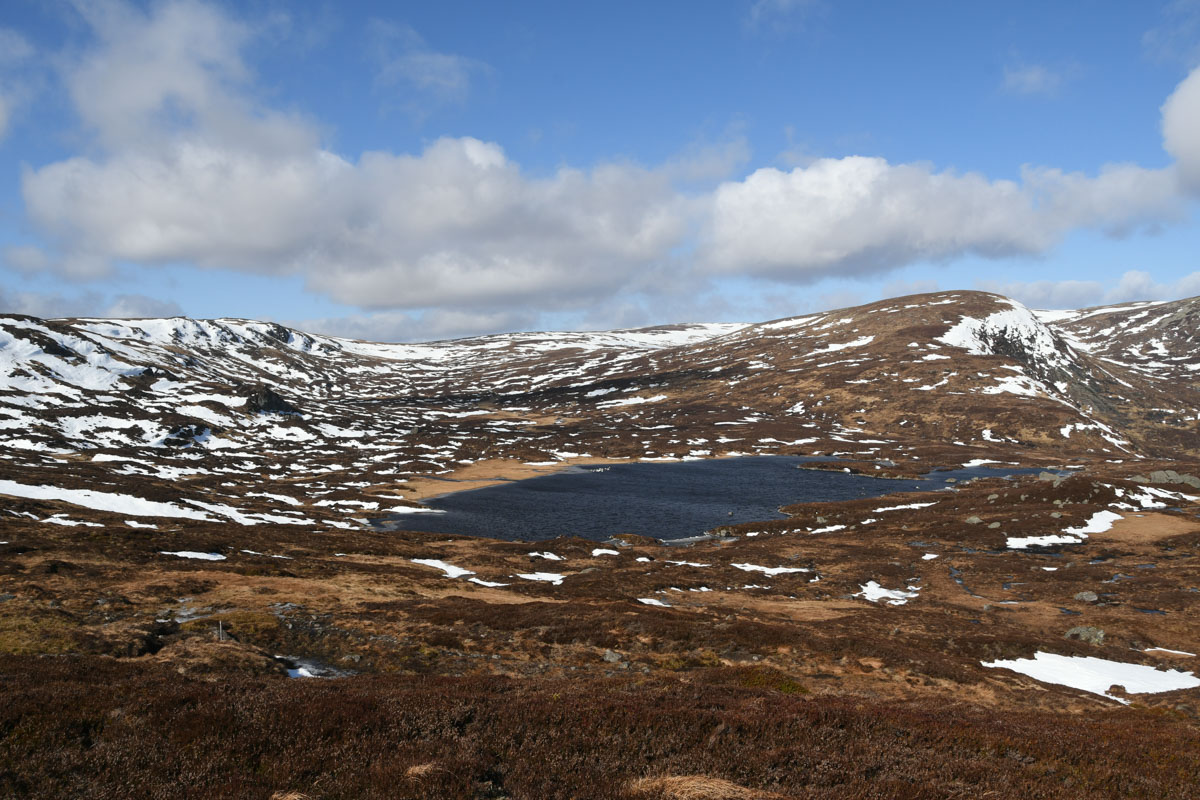 Dropped down the path towards Glittering Skellies, birdsong emerging from the woods which as yet remain leafless. 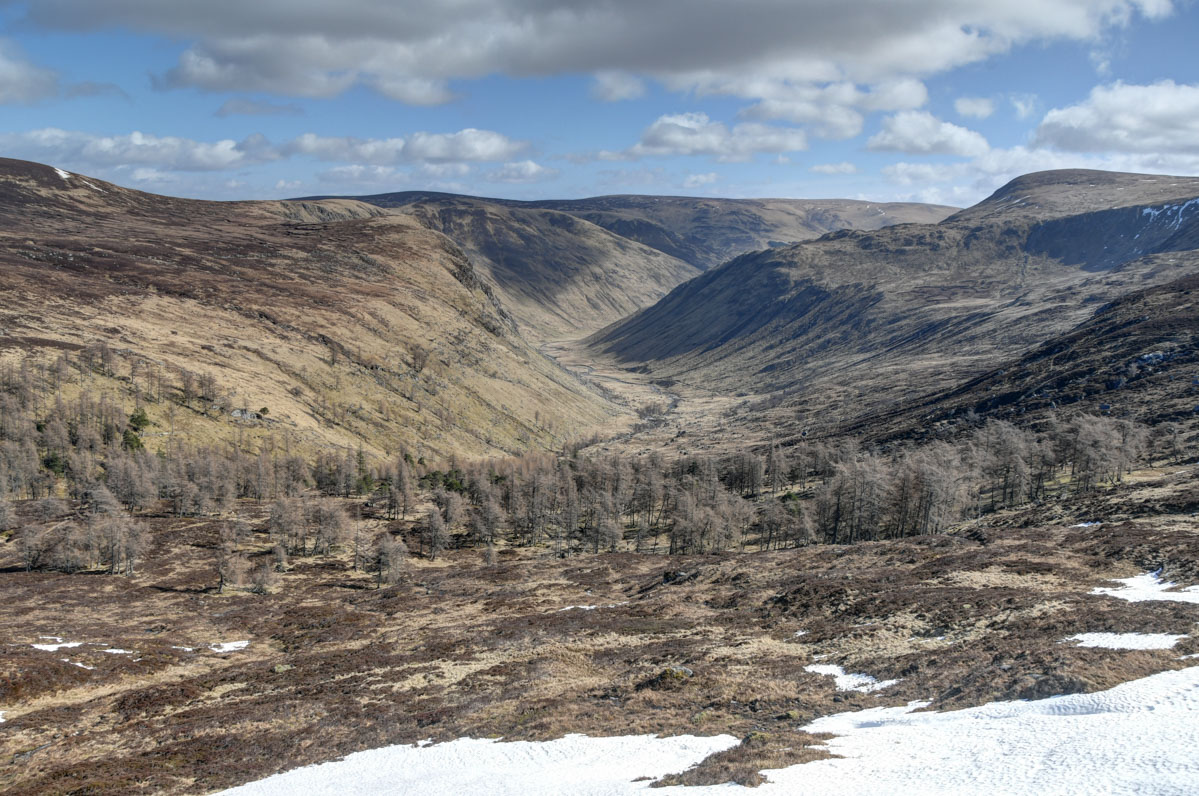 We had a nice camp here in the woods a few years ago – it’s a nice spot. Sat and had a second break for food in the much warmer sunshine.

Set off back along the track along the River South Esk back to the car park. The names round here are an interface of Gaelic and Scots. The big crag of Juanjorge isn’t though…no idea about that one. 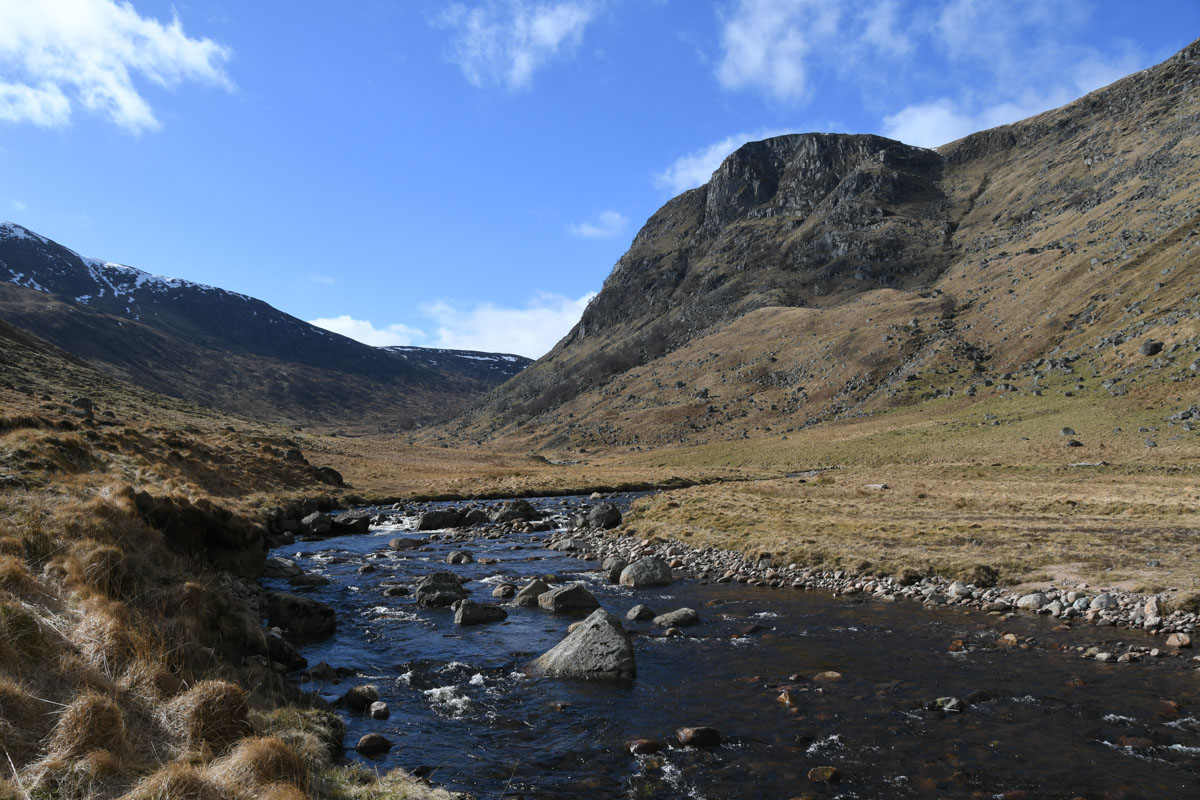 Approaching Moulzie we spotted a pool full of mating toads – their calls are similar to distant ducks or geese, nothing like frogs. 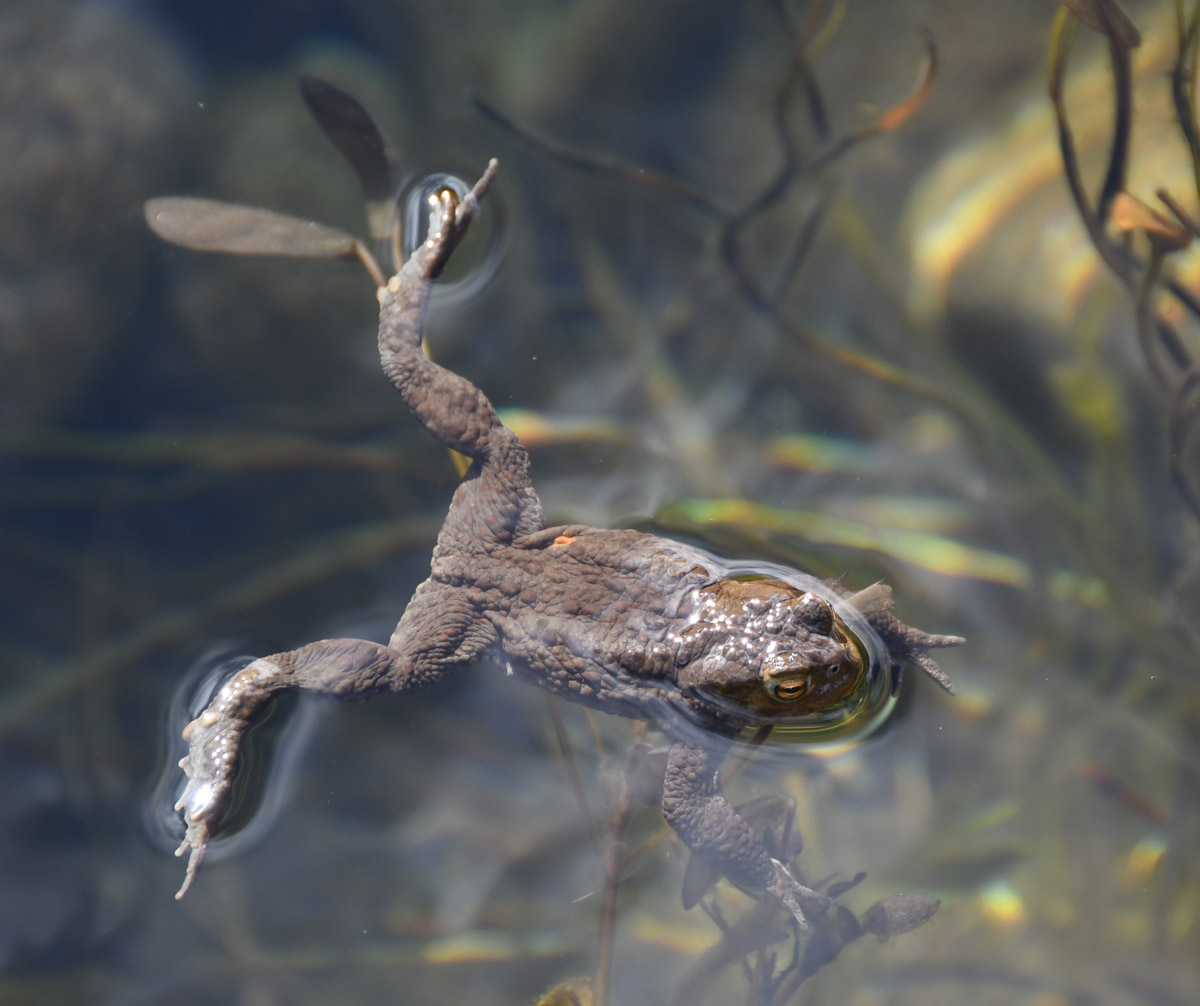 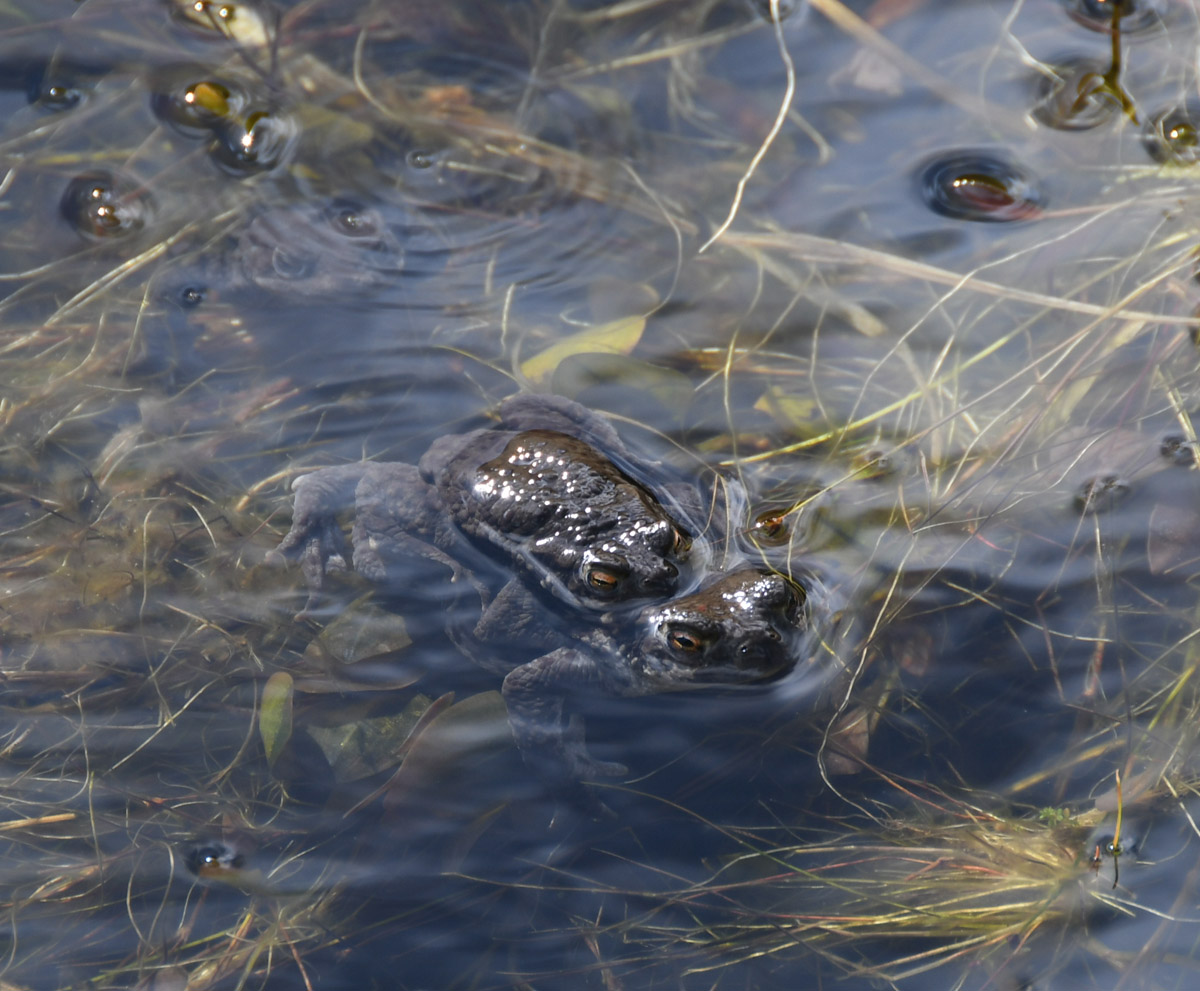 Ambled along at a slow pace, feeling quite warm. The Strone looks a decent ascent route to Cairn Broadlands for another day. 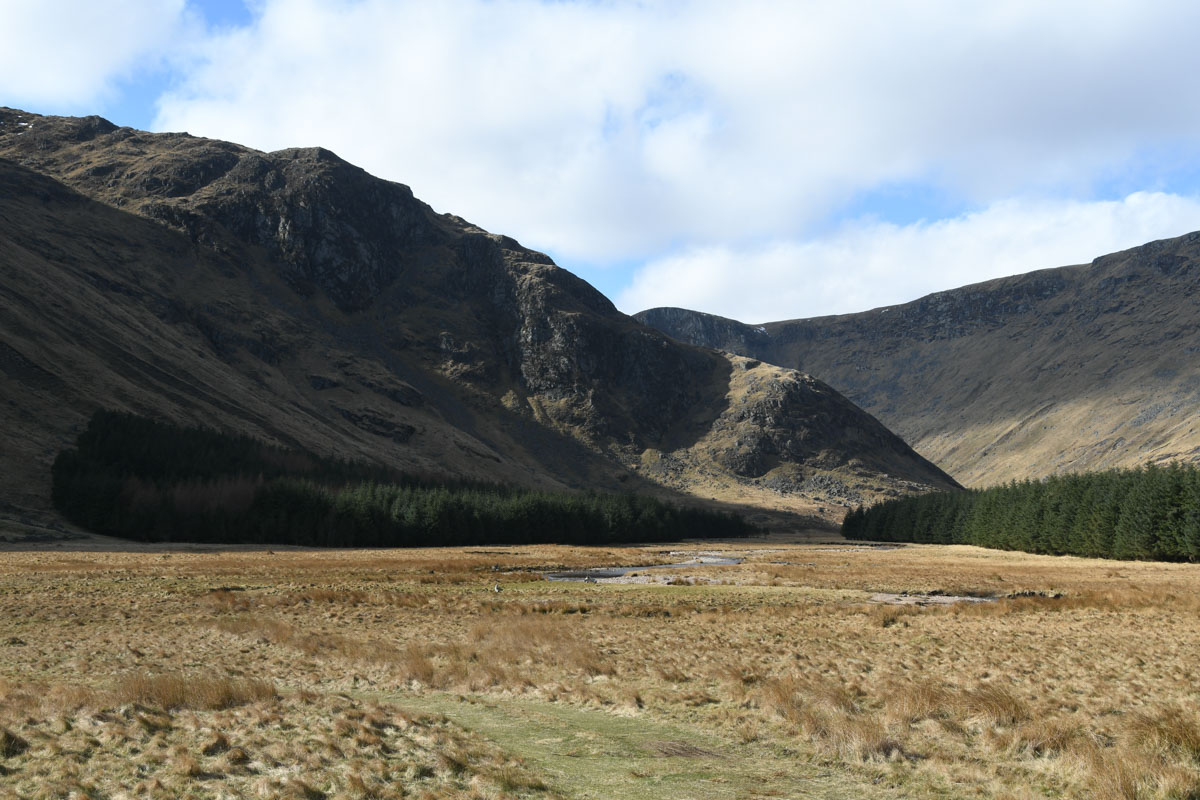 Back to the car park enjoying the signs of the cusp of Spring – the next 8 weeks are probably the best nature has. 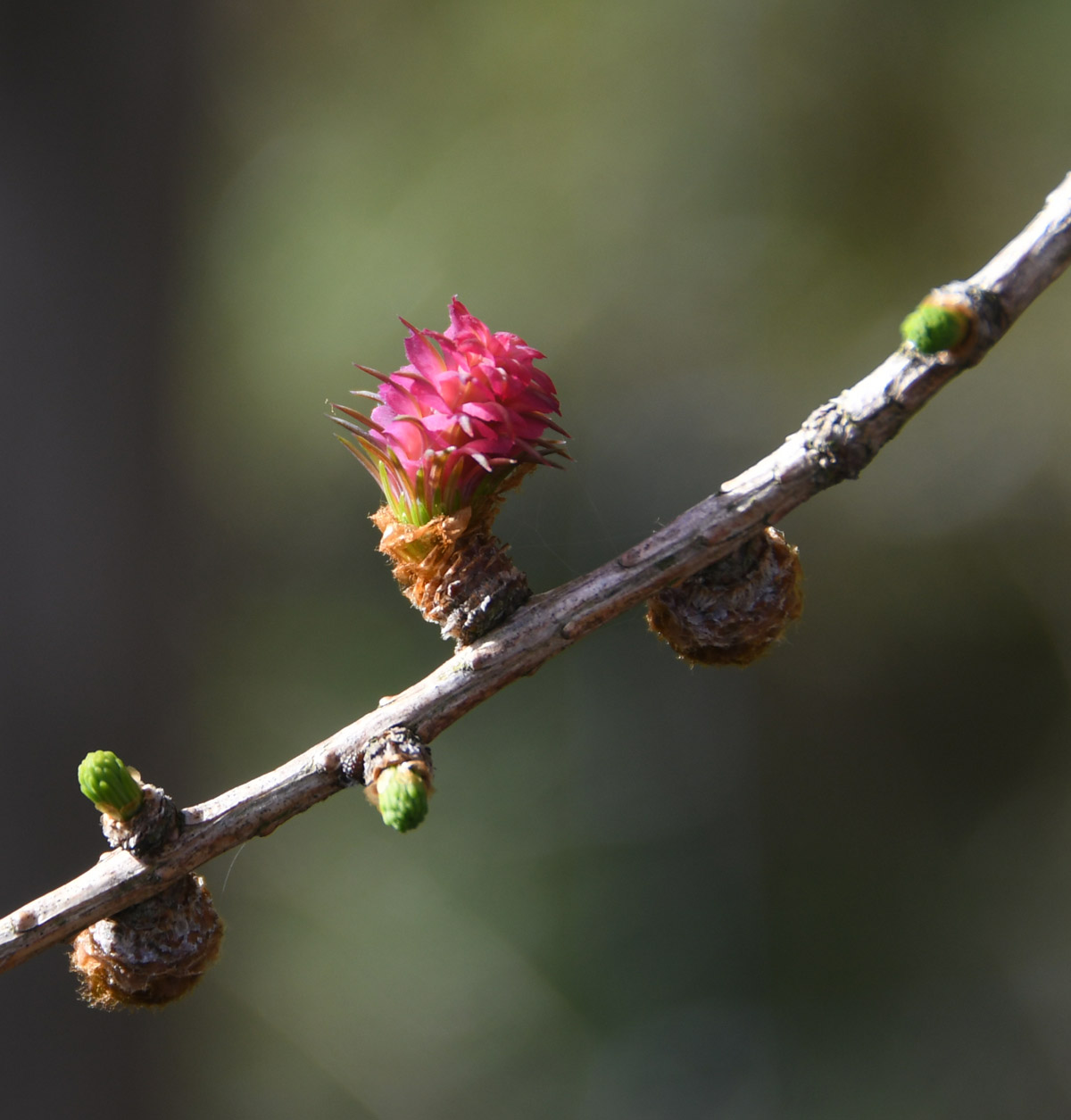 Good to be out and about – need to get the tent out.