A week’s holiday near Feshiebridge did not deliver any fantastic blue sky days. We did have reasonably benign conditions and got out on a few walks, between watching the bird life from the cottage.

We’ve explored quite a lot of the ridges above Glen Feshie over the last few years. One peak we have only passed by is Creag Mhigeachaidh. This top sits at the end of the NE ridge from Sgor Gaoith beyond Meall Buidhe and Geal Charn.

Parked at NH 852 012 and took the lovely path up through Caley pines which continues along the base of the Meall Buidhe/Geal Charn ridge.

These are great woods – a lot of bird life including the distinctive calls of Crested Tits.

As we gained some height we could see SW to the NE coire of Geal Charn that we’d visited in November. 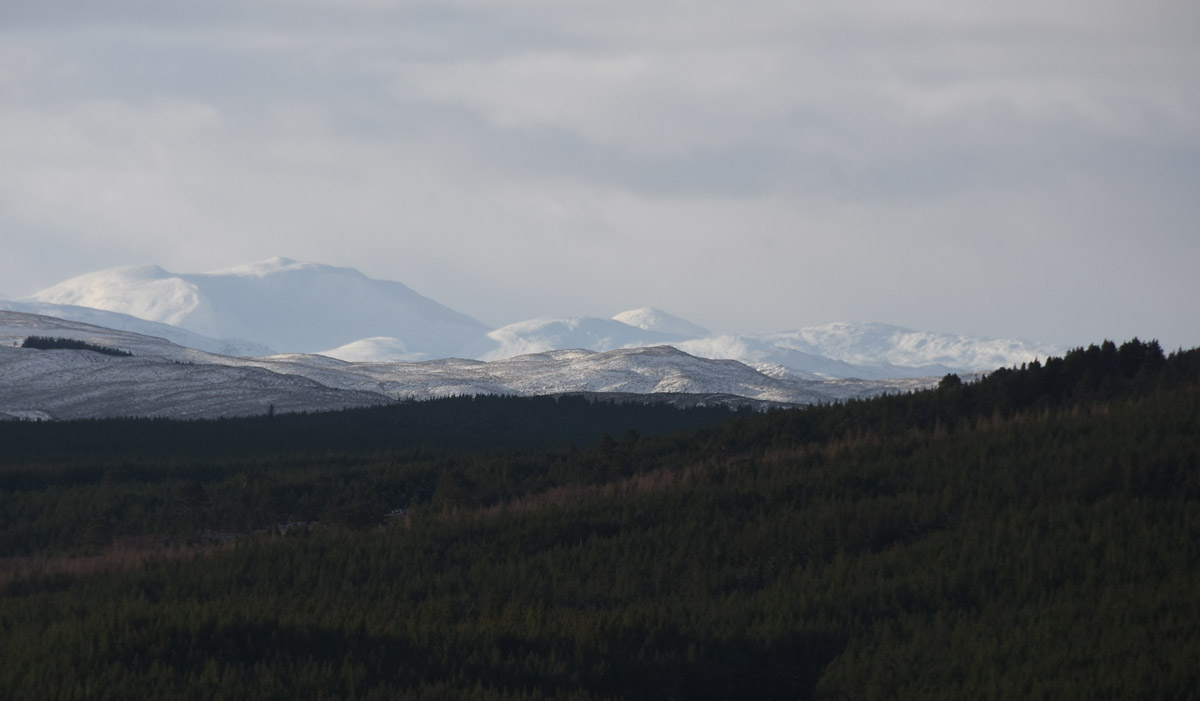 One of the best bits of winter is seeing tracks in the snow – a Red Squirrel had preceded us. 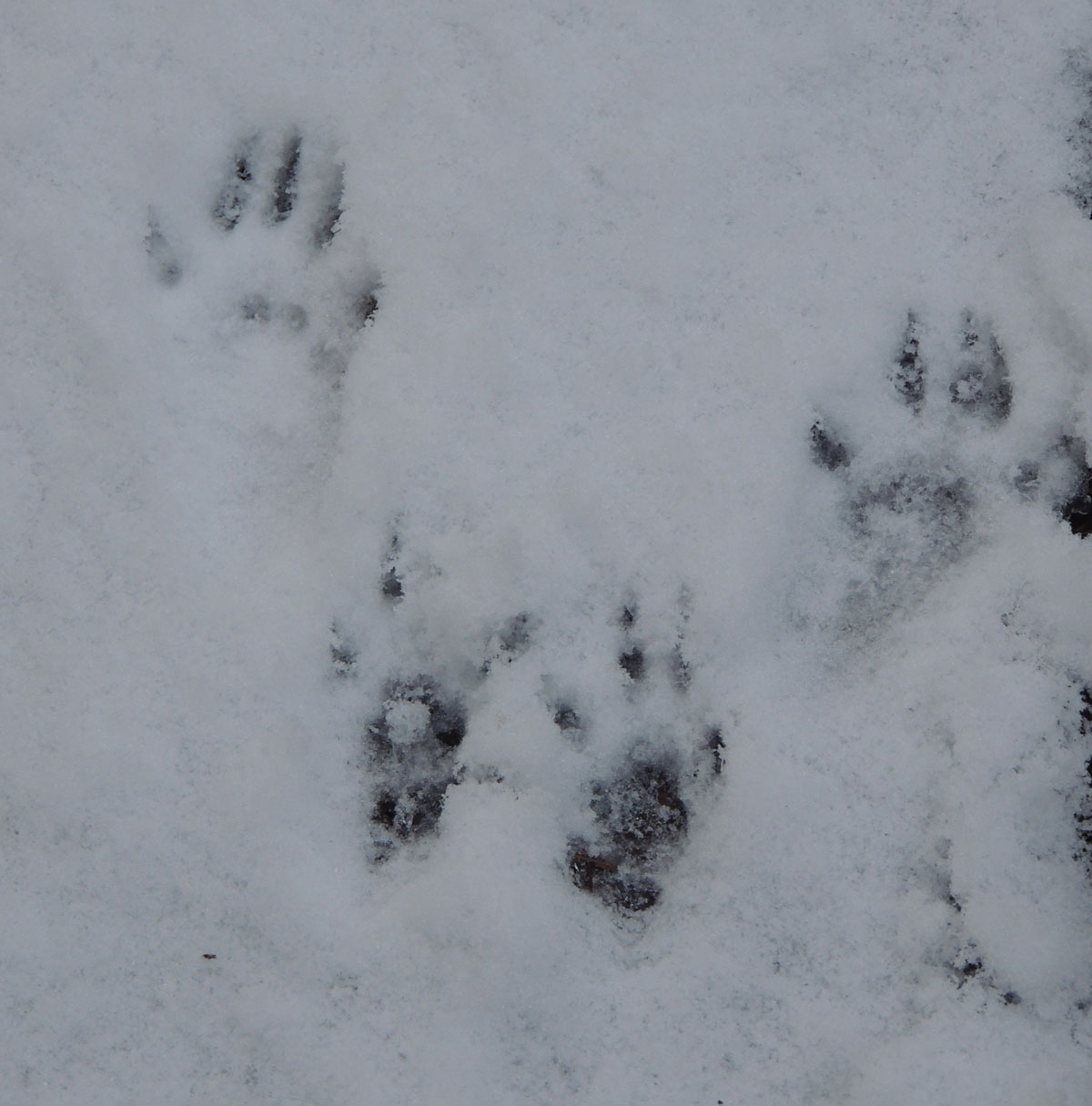 At NH 869 009 there is a branch in the path which runs up to the bealach between Geal Carn and Creag Mhigeachaidh, along the Allt nam Bo. 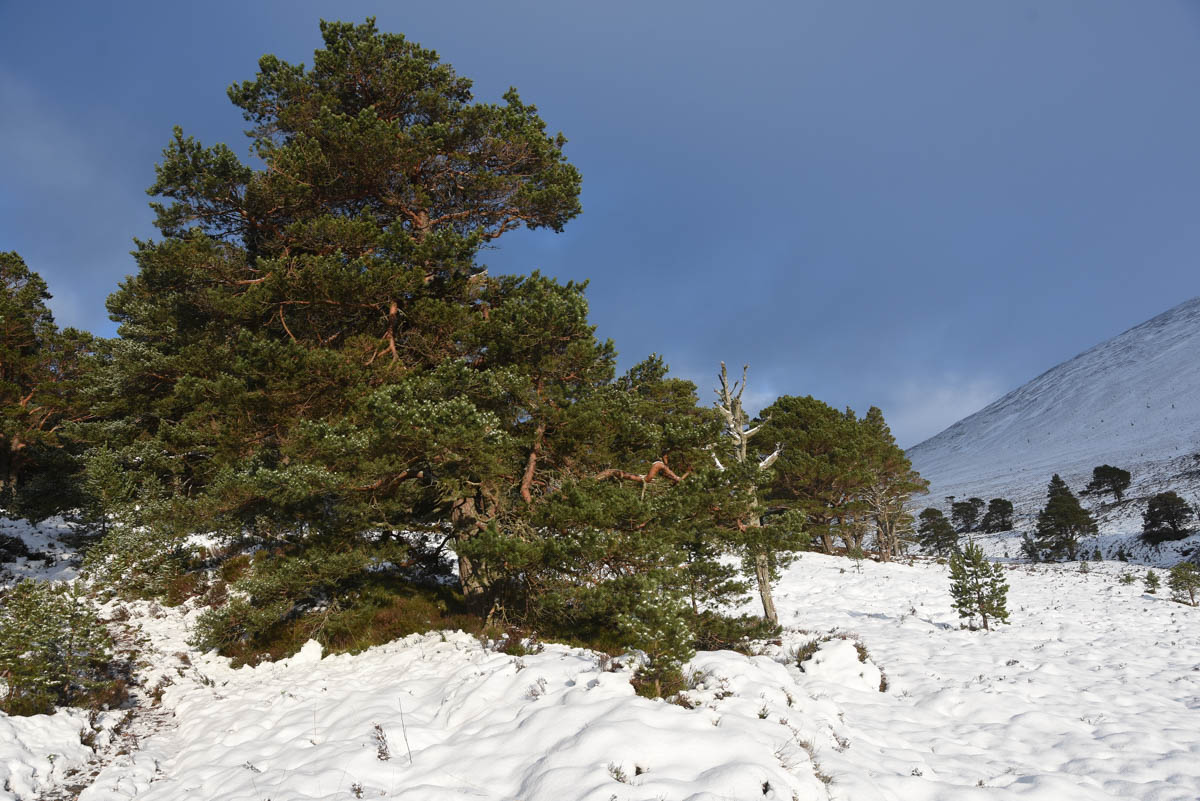 We got some welcome sunshine as we followed the path. The contrast of whites, greens and blue is lovely. 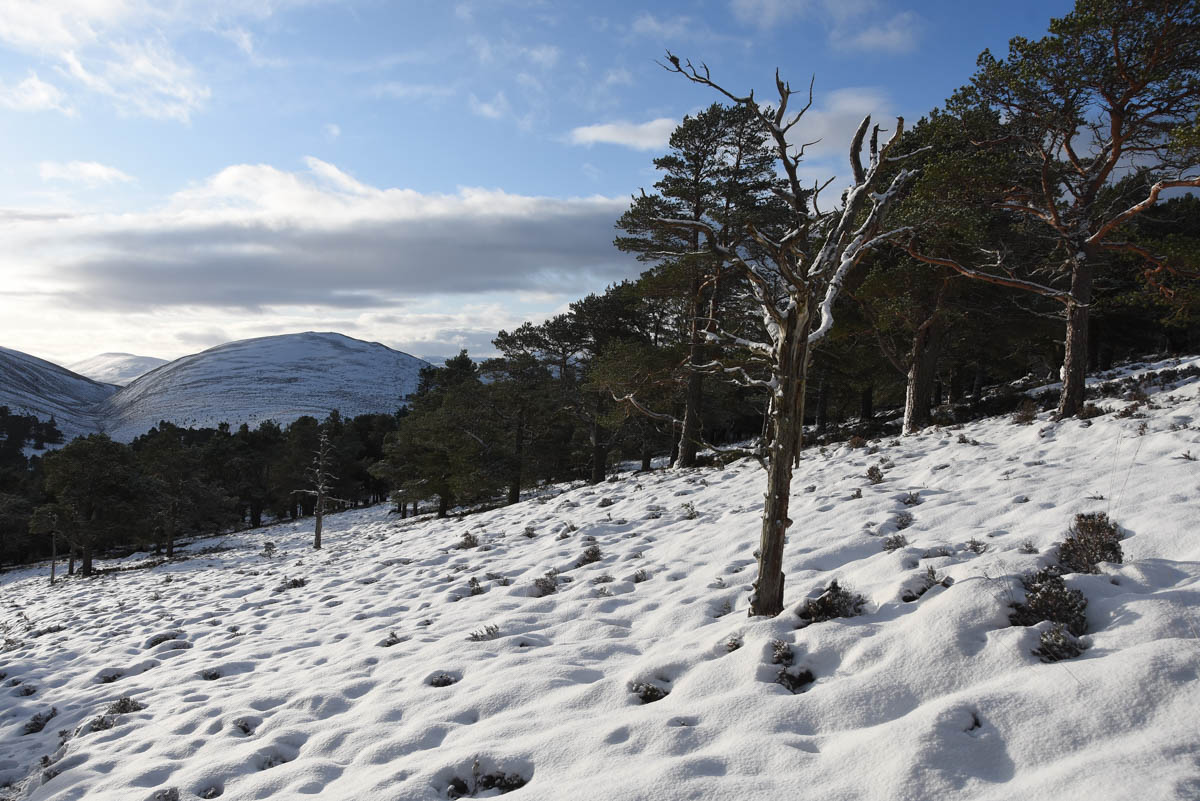 Happily for us others had broken the snow, so progress was much easier than it might have been.

To the south, beyond the cleft between Cairn Creag Ghiuthsachan and Carn Ban Beag we could see the Corbett Carn Dearg Mor. 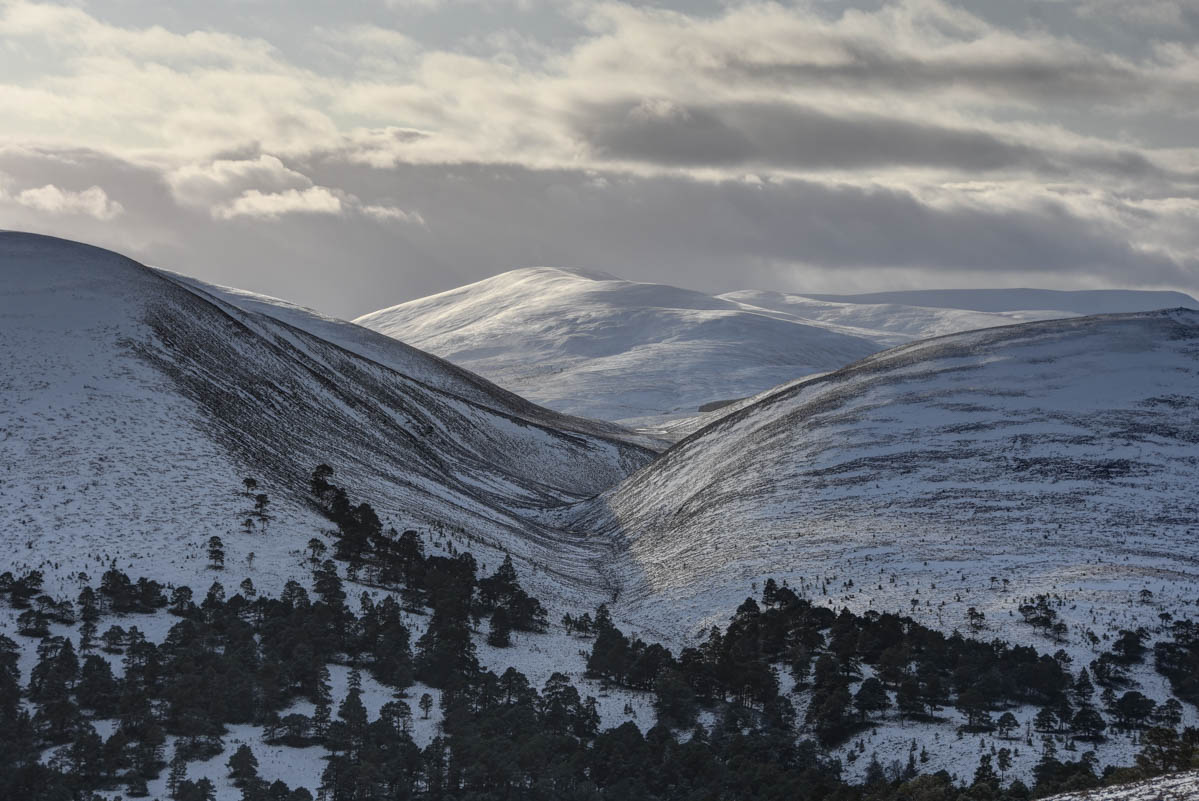 There was a mix of grey and light, quite atmospheric. 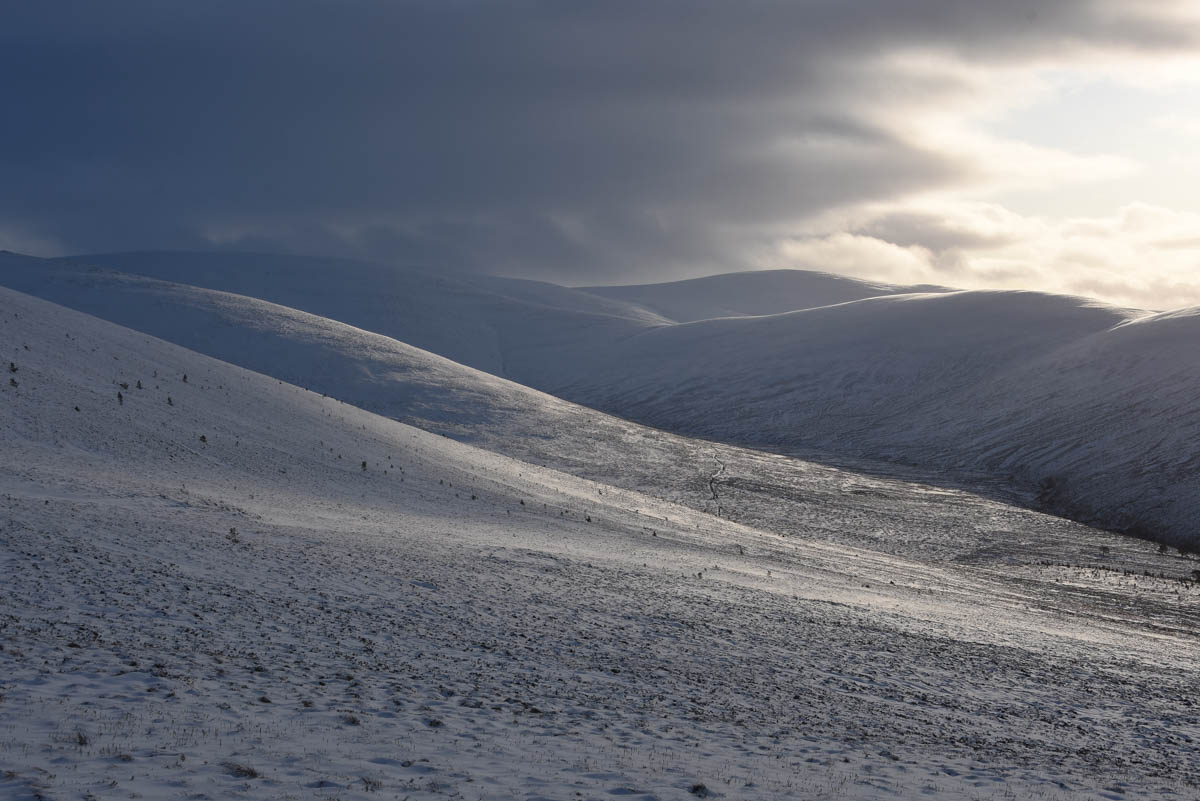 Previously we’ve climbed on to the Geal Charn ridge from the bealach here. This time we headed up Creag Mhigeachaidh from a little before the bealach. 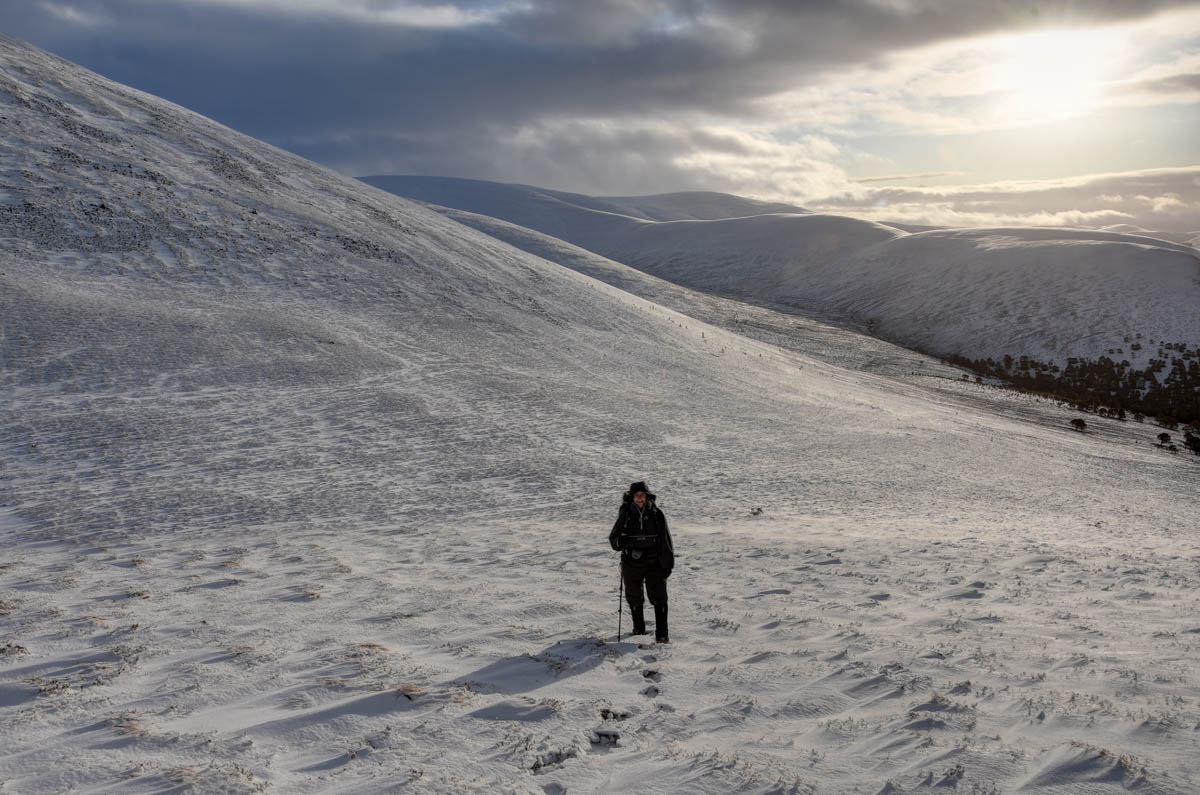 It’s a short ascent to the summit, as we progressed the wind was increasing and the sunshine diminishing. 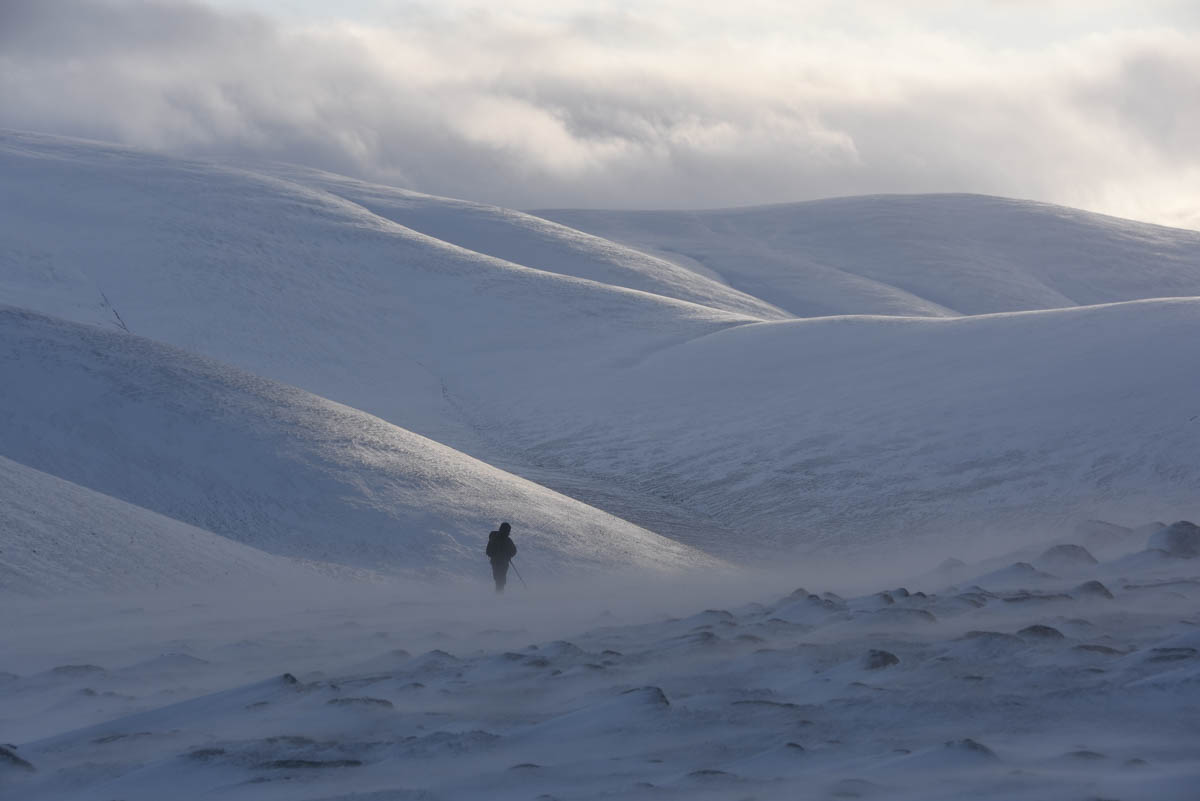 The cliffs of Creag an Leth-choin were still catching a little sunshine. 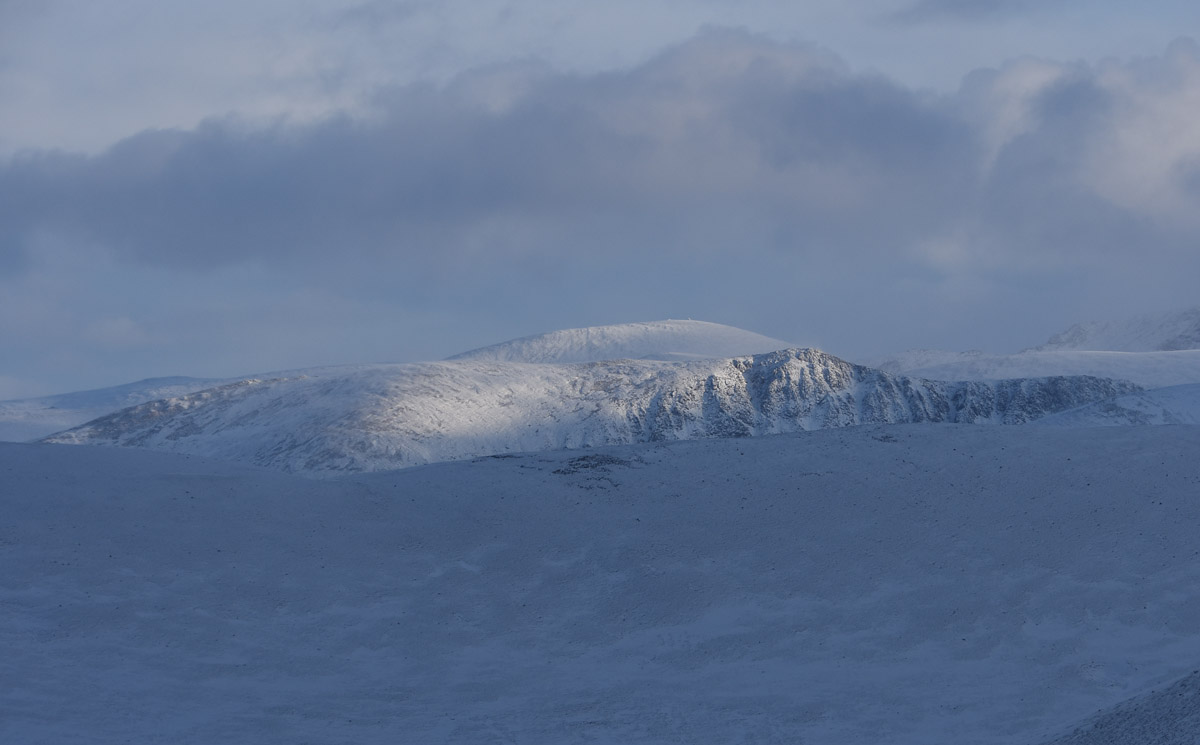 As we arrived at the summit it remained rather atmospheric. 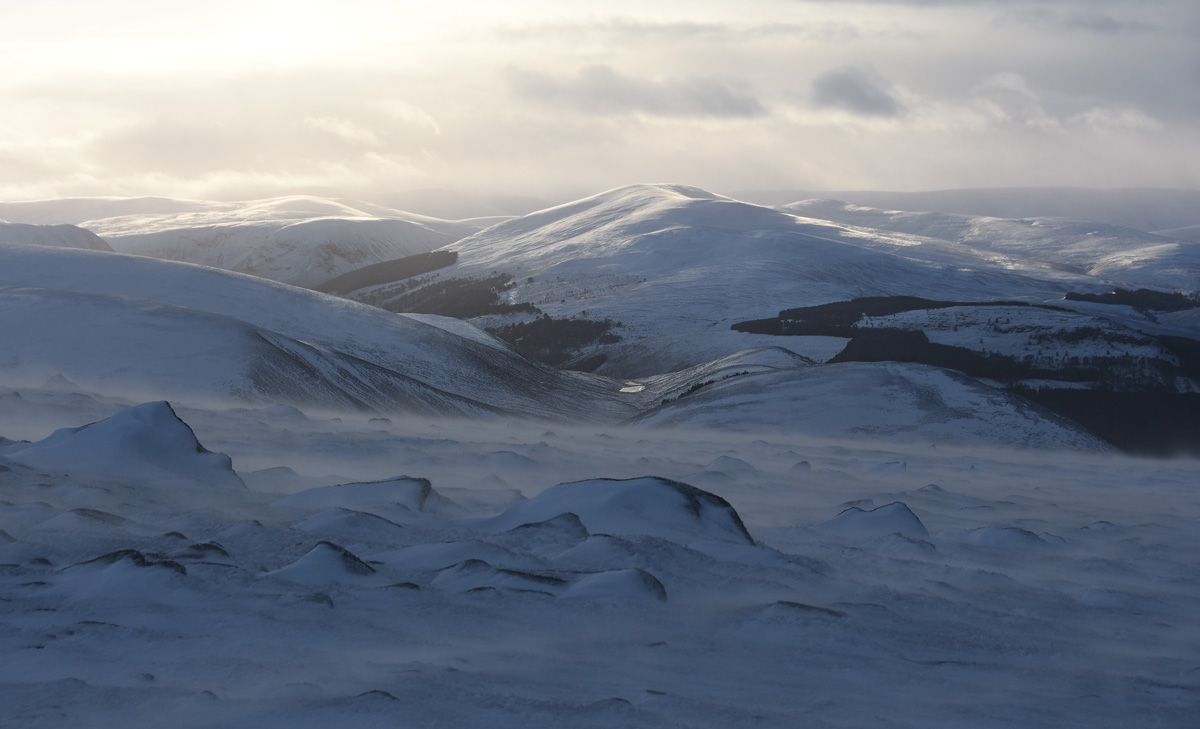 The little Loch Ghiuthsachan was still reflecting some light, we’ve visited that one before along with Cairn Creag Ghiuthsachan. 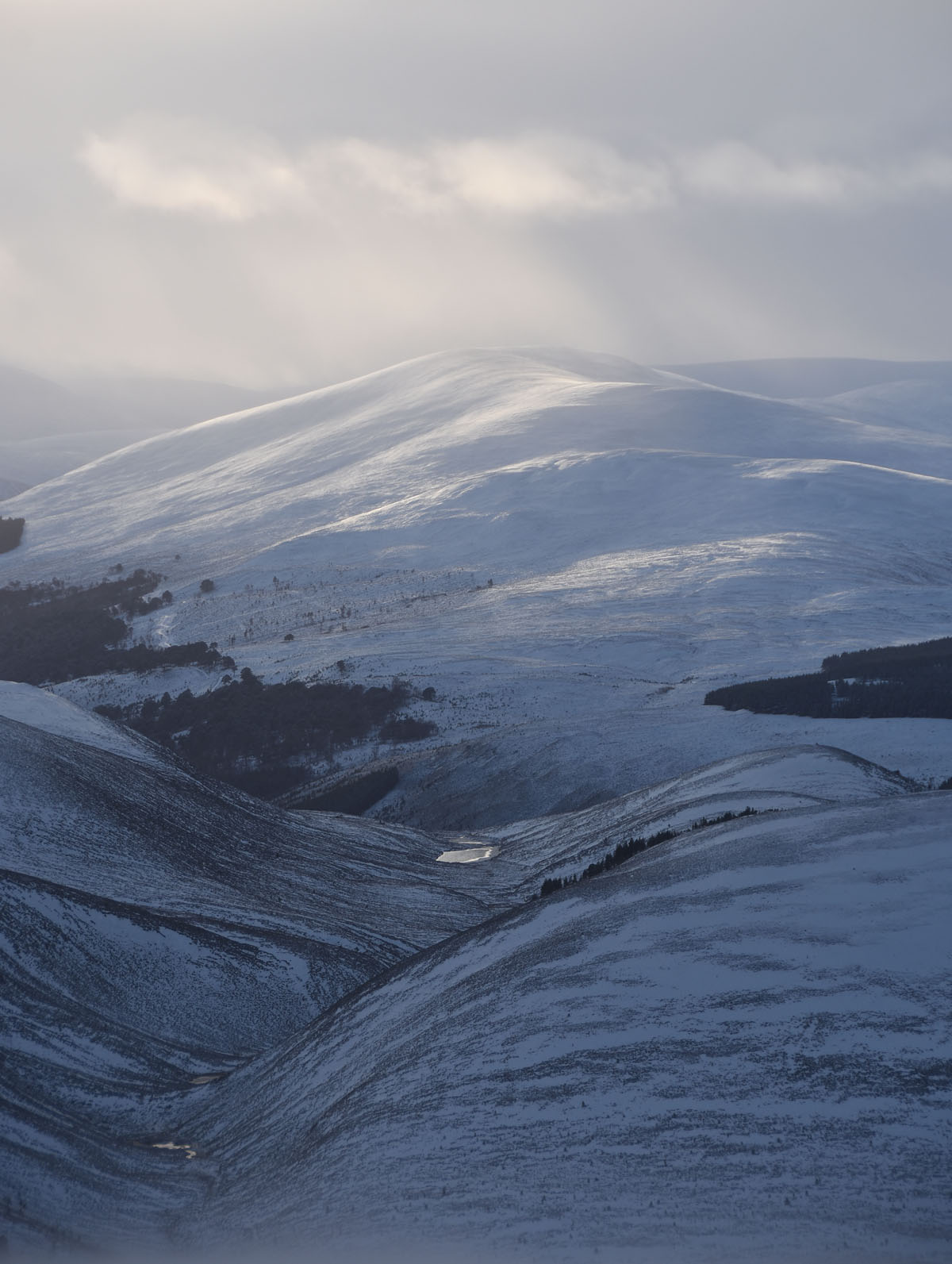 The top should be an excellent viewpoint on a clearer day, we will probably revisit this one, it has a fine reward to effort ratio.

Turned for home, in theory the path through the bealach winds down to the foot of Creag Follais, but we found that really sketchy on a previous look. Need to have another explore sometime. Returned via the route of ascent. 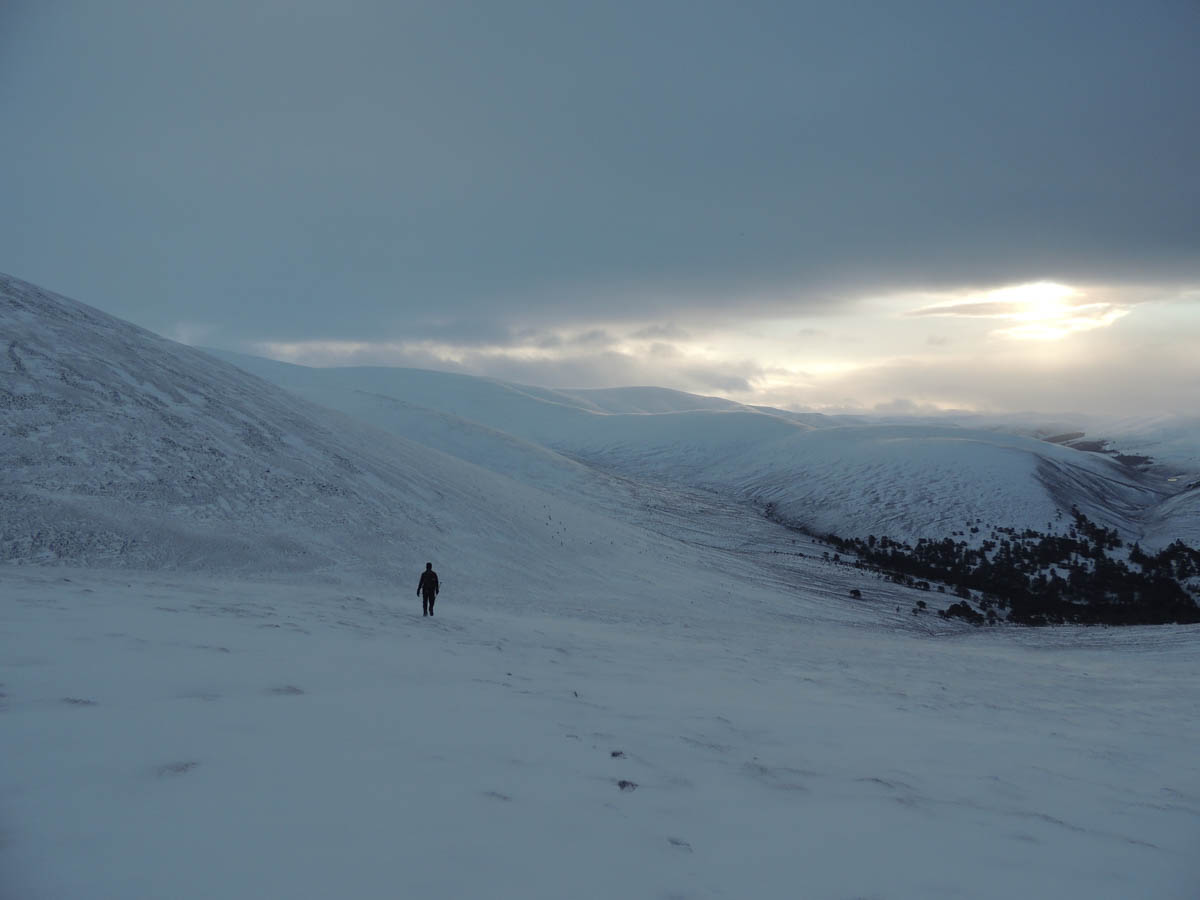 At NH 851 011 ther is supposed to be a path north along the foot of Creag Mhigeachaidh, but it isn’t obvious. With a little explore we found it and it gave a lovely diversion under the crags as the sun was setting. 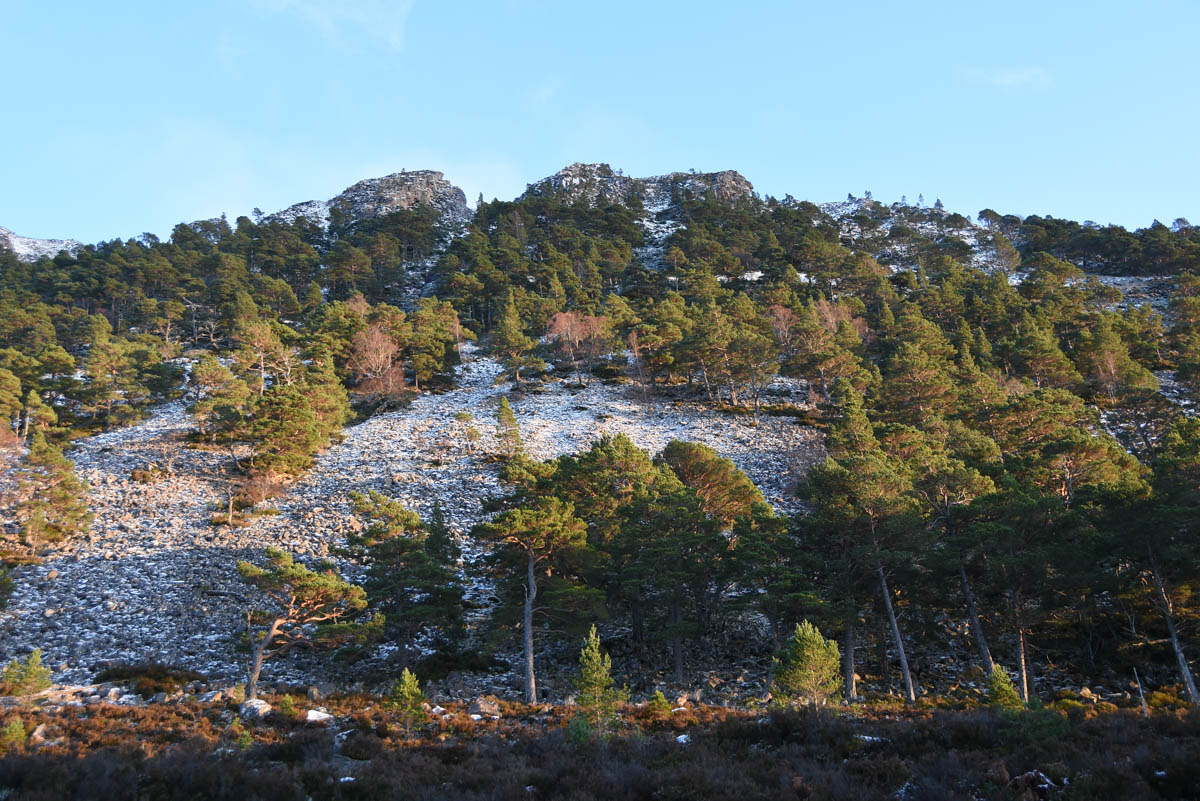 The Caley pines are always best seen in low sun. 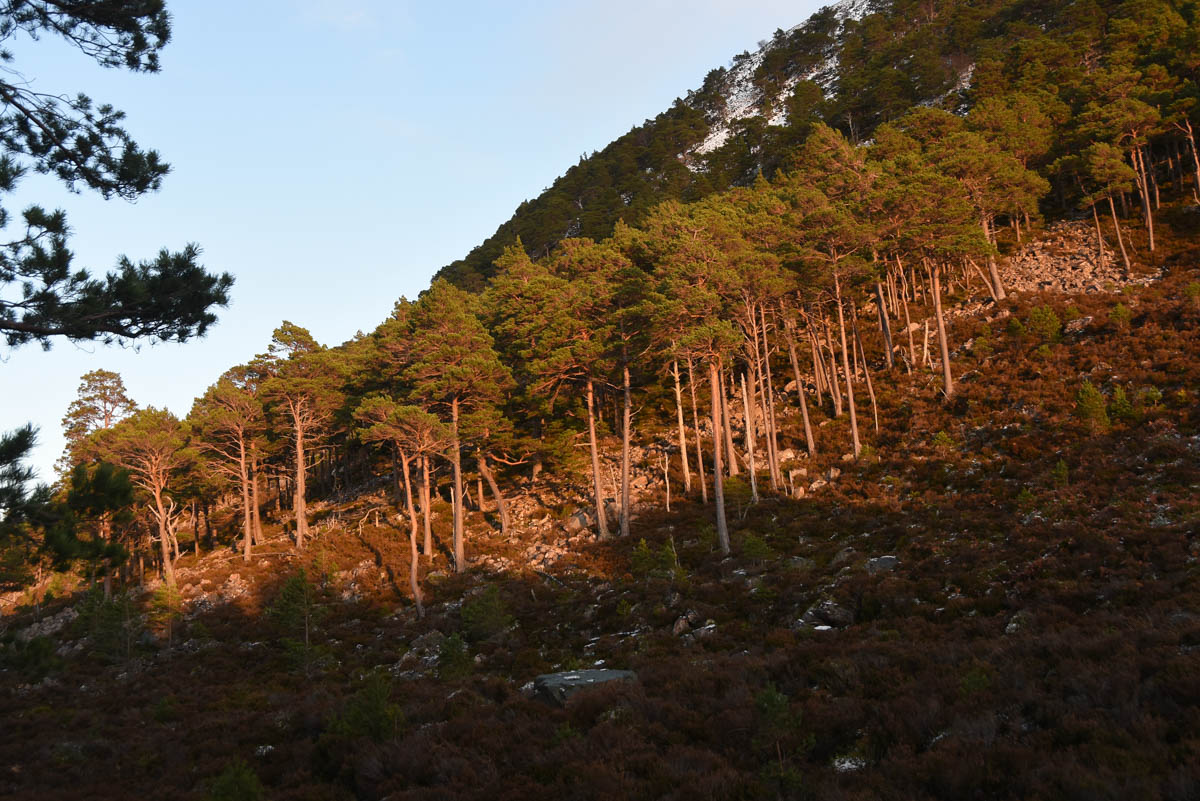 A nice wee wander and a great wee viewpoint.